Remember Marie-Hélène?  (Look! I figured out how to do the accent marks above her name.  That actually came about compliments of my broken E key.  I had to hold it down to coax it and realized that other E options would pop up!)  Anyway, I featured her family room in a Decorating Dilemma post just before Christmas.   I received an e-mail from her the next day sharing that she was up to her eyeballs in furniture rearranging, mood boards, and creative energy!  I hope she’ll send some updated pictures, so I can share her progress.

Today, though, we’re going to take a look at the other half of the room – the kitchen.  Here’s a little tour… 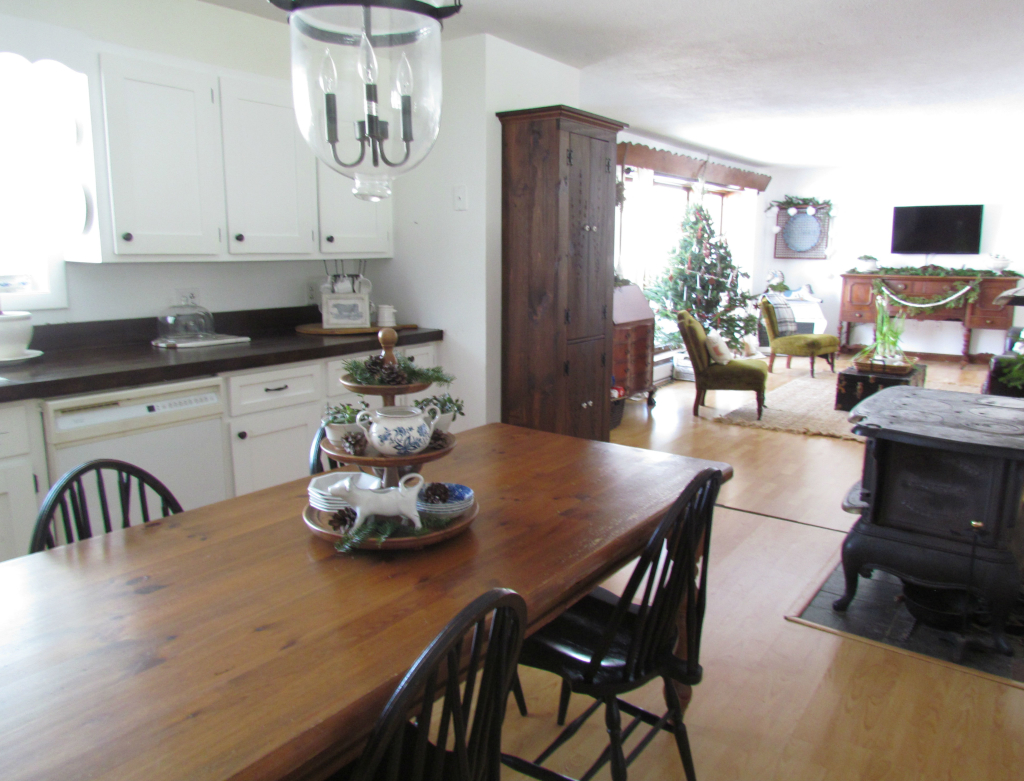 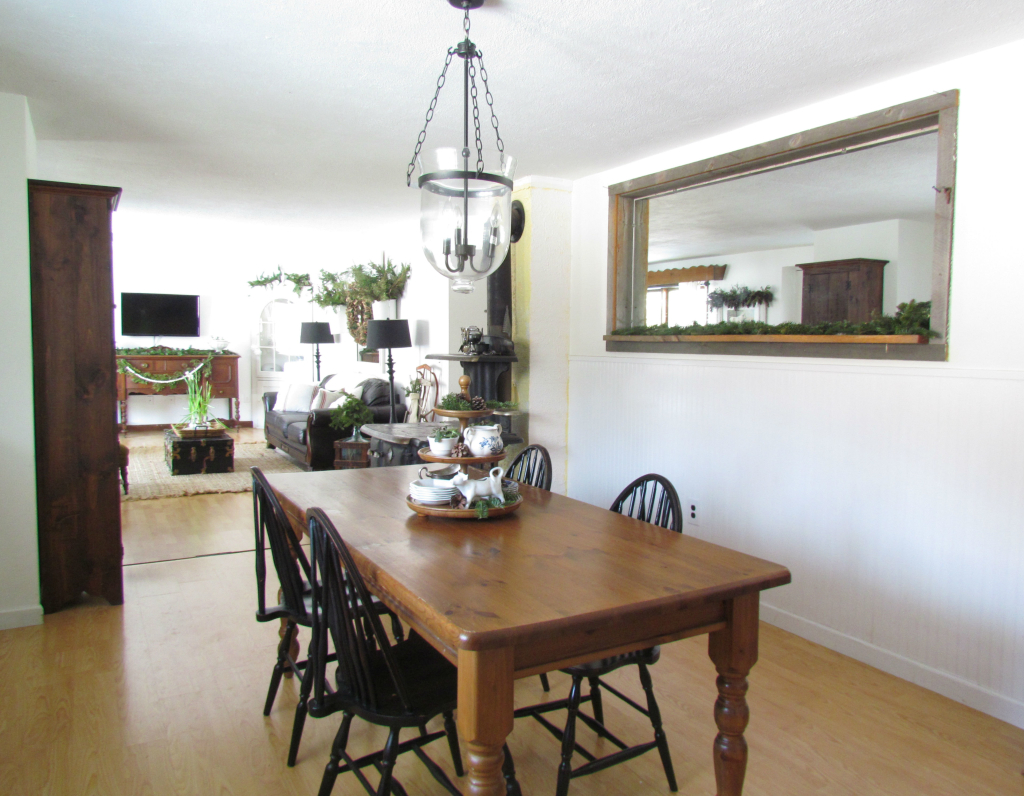 The first thing I noticed right away, as well as the thing Marie-Hélène shared puzzled her most, was the window/mirror thing.  She calls it a “mirror mantle”.  Don’t you just love weird little things like that in a home?  What in the world? It always makes me laugh to think that someone did something like that on purpose.  But, I’m sure some people think that about some of my decorating choices, so to each his/her own, right?

Anyway, judgements aside, it is a large, quirky thing hanging out in the middle of Marie-Hélène’s kitchen.  I actually was pretty excited about the potential of what appears to be a decorating mishap.

Can you imagine it with something like this built inside of the recess, sans mirror, of course… 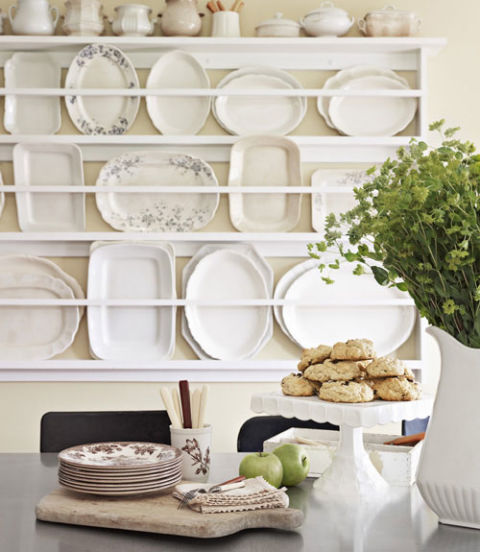 It would be an amazing focal point and would turn the mirror mantle into a farmhouse-style feature.

I would also suggest putting a console/buffet underneath the recess to make it feel a bit more like a hutch.  It would have to be something narrow, so it doesn’t crowd the table, but I’m thinking something along these lines… 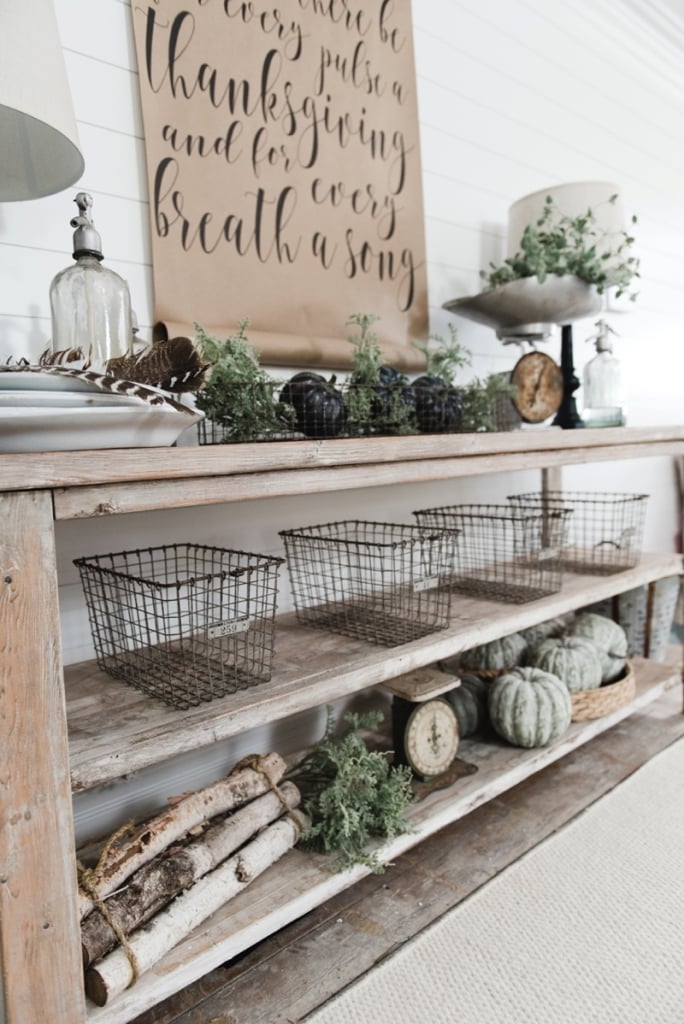 Both of these solutions would visually balance the cabinetry on the other side of the room and add more storage as well as a place to use as a serving buffet for parties family dinners.

I actually like the table, but Marie-Hélène wants to make things a little lighter and brighter. 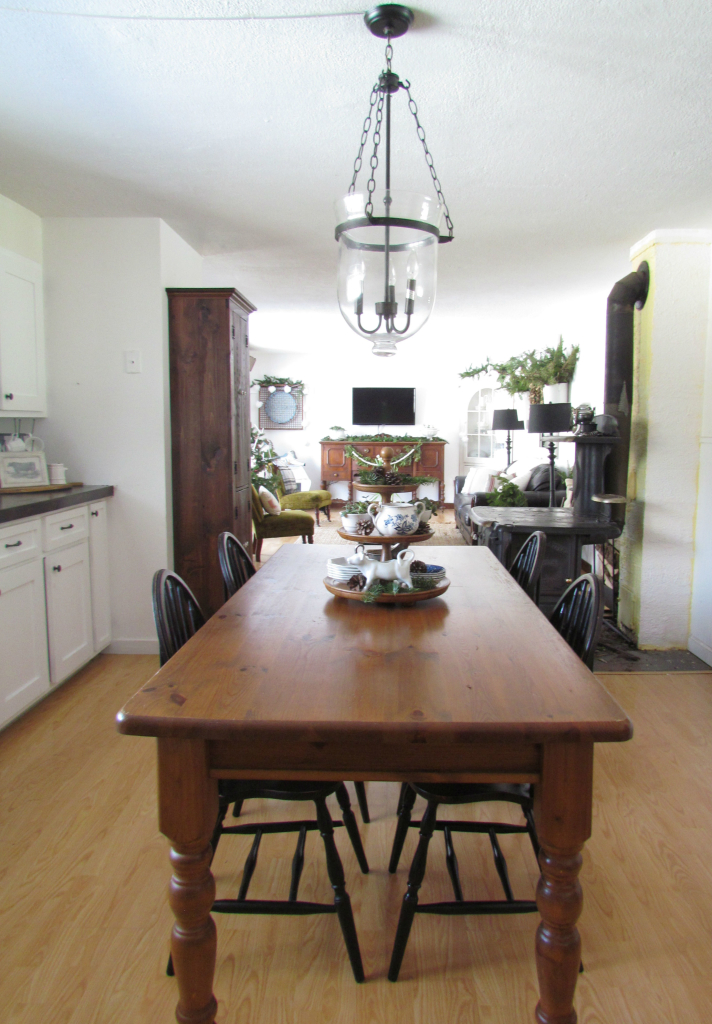 Since the table has a nice shape, painting it is a great option.  I would definitely sand off the gloss and, since it would work nicely with the look she is going for, a fresh coat of white paint would be a good option. 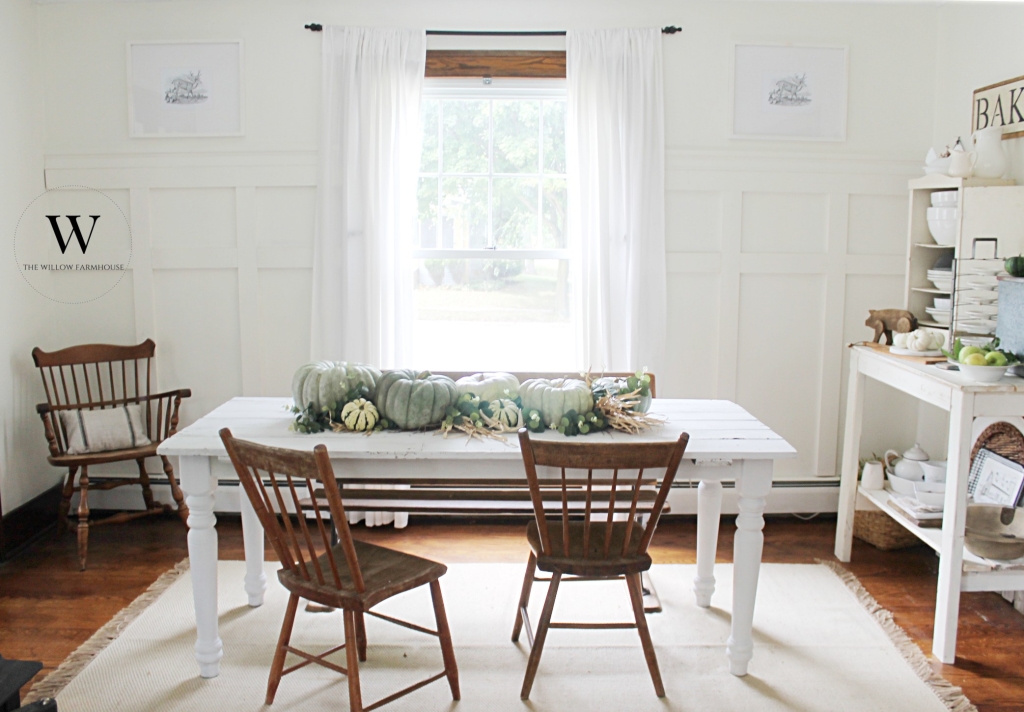 Or painting it gray would work nicely as well… 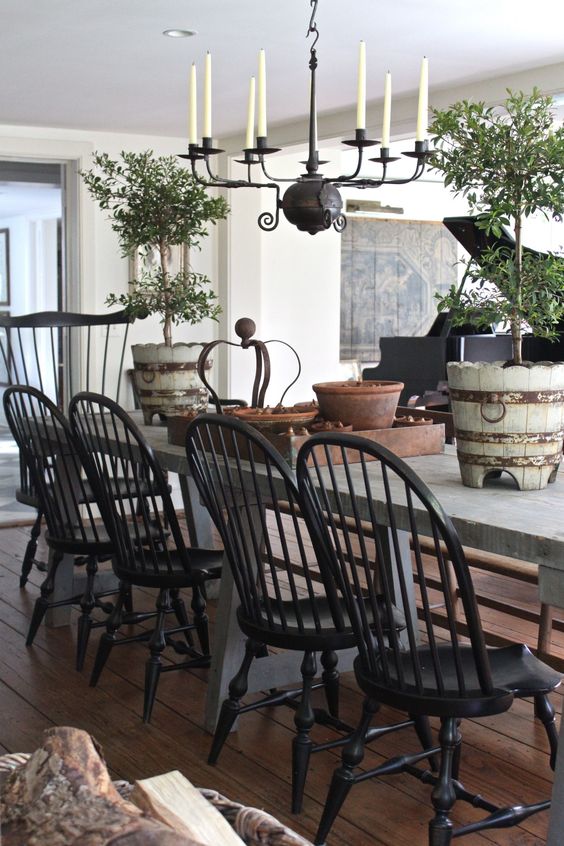 I would also suggest adding a braided jute rug under the table.  It’s nice to have as a “crumb-catcher”, but it also grounds the table and chairs, framing them out visually.  I like the braided jute rugs, because they are a flat weave and they are soft underfoot.  I’ve tried a lot of natural weave rugs and these are my favorite. 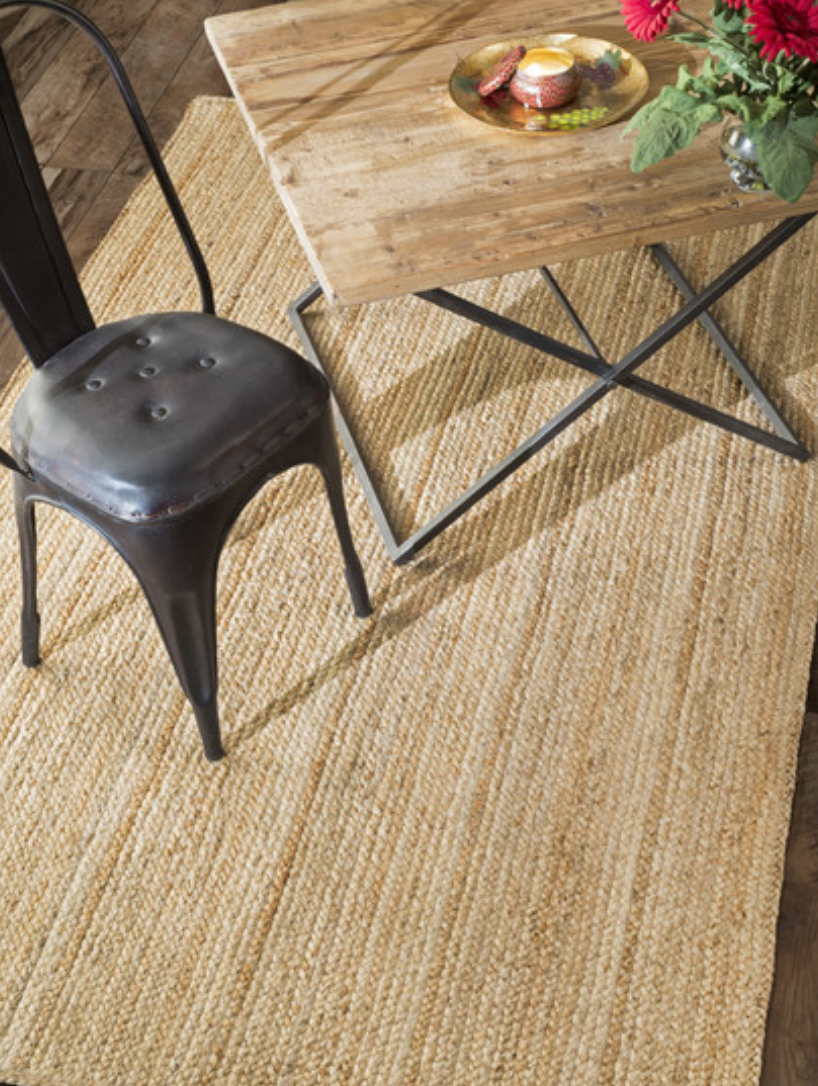 Marie-Hélène has made some budget-friendly improvements to the “built-in” part of her kitchen, like painting the cabinets and treating the laminate counters with a product to make them look like wood (a stainable primer).  She would love wood counters, a farmhouse sink and new appliances, but it’s not in the budget right now.

I think that what she has done looks great and there isn’t a need to immediately make big changes.  Making some of these smaller changes will make a big impact for a lot less money than new cabinets, countertops, fixtures, etc.

Now, if we are going to pretend for a moment that we live in a world without budget limitations, I would suggest a few things.  First of all, I would see if the soffit above the cabinets contains ductwork or any other “guts” of the house.  If not, I would knock that thing out so fast!  Soffits have their place, but above cabinets, they just bring the height of the room down and are wasted space.  I would then either add open shelving, which is a staple of farmhouse style (although it’s not going to work for everyone), or cabinetry that is taller and goes all the way to the ceiling.  Mixing in some glass-front cabinets would be a good option, too.

For an immediate and free option, though, I would suggest just removing the upper cabinet doors.  That is a no-commitment way to see if you like open shelving and it will open the room just a little more.  Trust me on that one.  I know it doesn’t seem like much, but removing cabinet doors can add a lot of visual depth to a room.

If she’s just itching for something, chalkboard paint is a fun, cheap option. 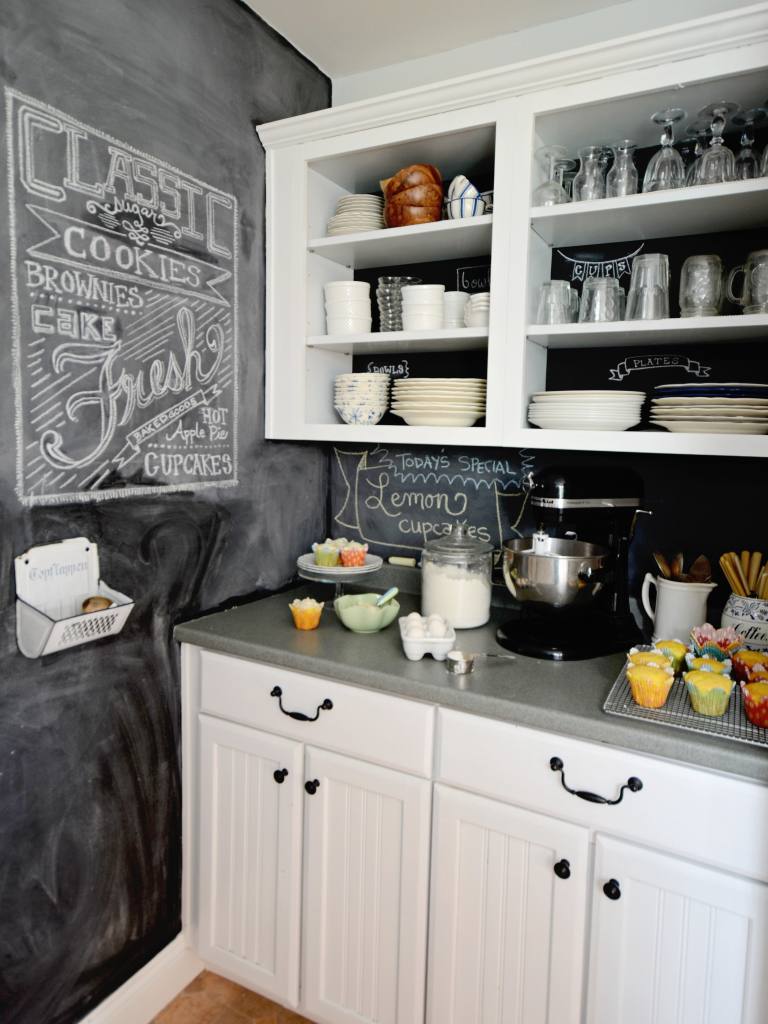 That is a throw-back picture of my kitchen!

She could even draw a tile design with chalk or something.  I like that it’s low-commitment, since she wants to make changes in the future.

When she is ready, I would point her to Ikea, who sells 8′ lengths of butcher block counters for $149!  And Ikea also has a farmhouse-style apron-front sink for $312.

Lastly, I would focus on the accessories.   Marie-Hélène already has a lot to work with, which is nice.  Sometimes just gathering them all on the kitchen table and then reworking them in the space can give fresh life to a room. 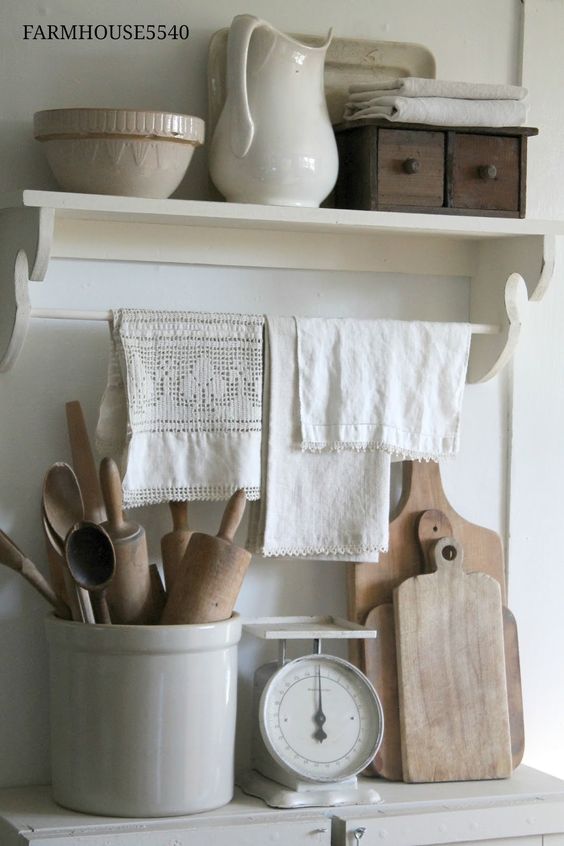 And good accessorizing can detract from things that you aren’t in love with.

Remember that farmhouse style is about utilitarian beauty, so stoneware, cutting boards, rolling pins, potted herbs, linen towels, crocks and such are a good place to start. 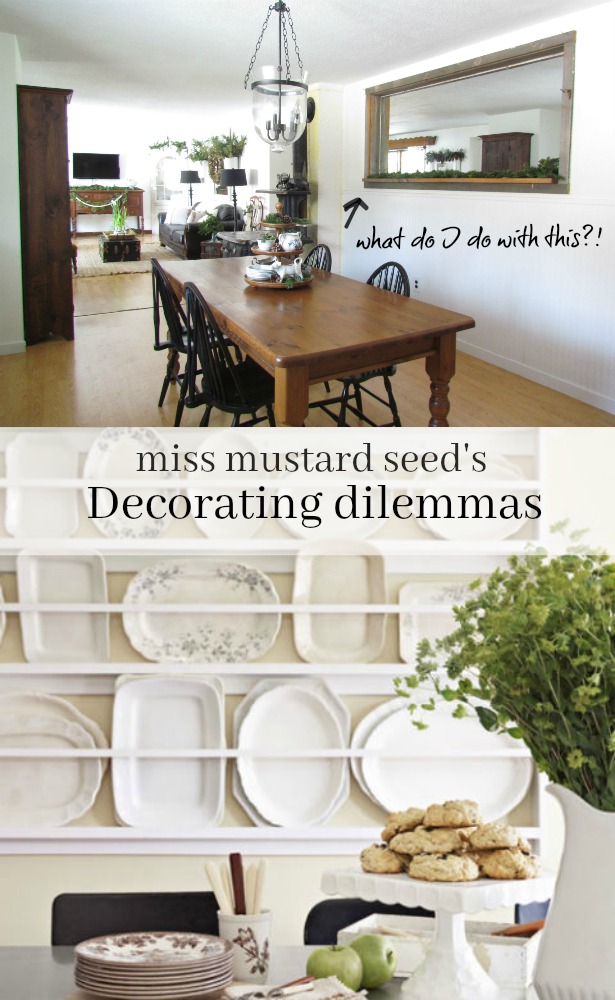