dear reader | to the one with a “stuff problem”

A few minutes after I put my sons to bed a few weeks ago, I heard the sound of feet on the steps. “Mommy?”  My oldest son had crept out of bed with something on his mind.  I walked around the corner to the bottom of the steps.  “What is it, buddy?”

Earlier in the evening, we talked with him about buying a new bike.  He had outgrown the one he had in ability and size.  I thought he would be dreaming of the new bike, but instead, he was distressed about the fate of his old one.

As we got into the conversation a bit further, with a frog in his throat and tears welling up, my tender-hearted nine year old confessed, “It’s just sometimes hard for me to let go of things that I’ve had for a long time and I really enjoyed.”

His moment of raw emotion and honesty about that bike so clearly articulated how a lot of us feel about our stuff.   Even a too-small bike with a broken pedal and chain that is always coming off can be hard to let go of.

A few months ago, I wrote a post about styling tips for the home and many readers responded with the same issue…they had a “stuff problem.”

Much like my son and his bike, the idea of decluttering and getting rid of some stuff seems really hard.  For some reason or another, you have some emotions deeply entangled in that stuff and even the idea of selling it, donating it, or pitching it feels like a personal loss.

The big problem with relying solely on our emotions to determine if something is worth keeping or not is that you can end up buried in your stuff.  Can you imagine if we kept every single bike our two boys ever own?  And all of their clothes, school papers, toys, stuffed animals, etc?  We would have to have an entire room of our house just dedicated to the past.  And there would be so much stuff that it would be impractical to even interact with that stuff in any kind of meaningful way.  It would just sit there, for the sole reason that sadness was associated with letting it go.

I, personally, don’t want to have a relationship with stuff that’s dictated by negative emotions.

Believe it or not, I used to feel a lot more connected to my stuff.  I know it’s hard to imagine that the girl who will sell furniture straight out of her house would be hesitant to part with something, but it’s true.  I used to have a “stuff problem.”

The more stuff the merrier!

I remember one day, though, when I was flipping through a decorating magazine and paused to take in images of a home that I just loved.  Instead of just looking at the pictures, I decided to read the article as well.  It stuck out to me that the home owner/designer talked about how selective she was about the things that she had in her home and her “less is more philosophy.”  A few well chosen items were preferable over a lot of stuff, even a lot of good stuff.

I actually thought that was a little radical for me.  I liked all of my collections of stuff and the idea of parting with some of it seemed unthinkable.  I had so many things I would “never, ever get rid of”.

As the years have gone by and I have purged and paired down and sold most of the things I would “never, ever get rid of”, I have come to know the joys of letting go – the freedom from feeling an obligation to keep stuff that I don’t need, use, love, or have the perfect spot for.

If you’re ready to address your stuff problem, here are a few things that helped me…

You’re not getting rid of memories or people when you get rid of stuff.

This is a really hard one for people and it was for me, too.  (And that was the root issue for my son and his bike.  He had a lot of great memories associated with it.)  We know in our heads that we don’t need a thing to remember a special person or event, but our hearts beg to differ.  Getting rid of an items feels like we’re getting rid of the memory or person it’s associated with.  I realized at one point that I had a lot of stuff from my Oma & Opa’s attic that didn’t mean anything to me.  I only had it because it was theirs.  But, I did have some things that belonged to them that I use and love…the rug in my home office, the little wooden rocking chair in my boys’ room, my Oma’s sterling flatware, and a large ironstone soup tureen to name a few. 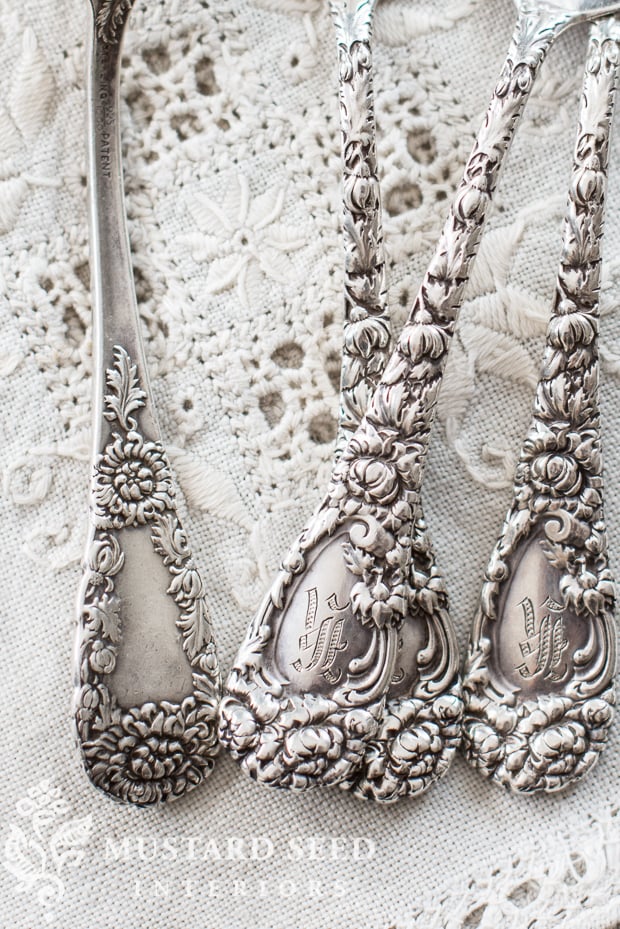 I didn’t need to keep everything I dug out of the attic.  So, I slowly started letting things go and it gave even more value to the pieces I decided to keep.

You should not feel obligated to keep stuff you don’t use, need or love.

Your house is not a storage unit.  You do not need to be the keeper of stuff for all of your extended family who “gifted” you with the “family pieces” that no one else wants, but they’ve insisted that “someone in the family needs to have it.”  I decided a few years ago that some beautiful antique pieces I inherited from my great aunt just weren’t my style.  So, I offered them to other family members and, if they didn’t want them, they were going to be sold.

It felt so good to give myself permission to not keep things I didn’t want.

A beautiful space is not just created by what’s added, but by what’s omitted.

I think it’s true that a lot of people have all of the components to create a space they really love, but there is so much extraneous stuff that the beautiful space they dream of is buried under it all.  A shopping trip is not in order, but rather some editing.  Just try it!  Try removing things from a room and only put back what you really, really love.  You might be surprised. 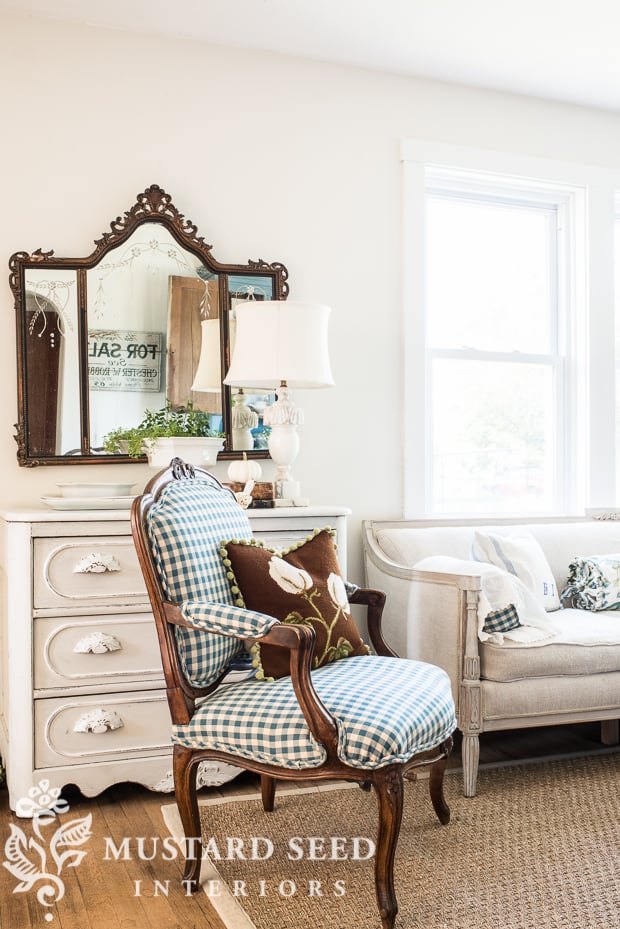 My Oma was a big time collector and was very sentimental about things.  I knew that already, but was reminded of it when I helped clean out their attic.  She had boxes full of keepsakes…autograph books, newspaper clippings, ticket stubs.  It had all been stored away in an attic for decades and the memorabilia was eaten away by silverfish.  I had a few teary, quiet moments in that attic.  In the end, it’s all just stuff. 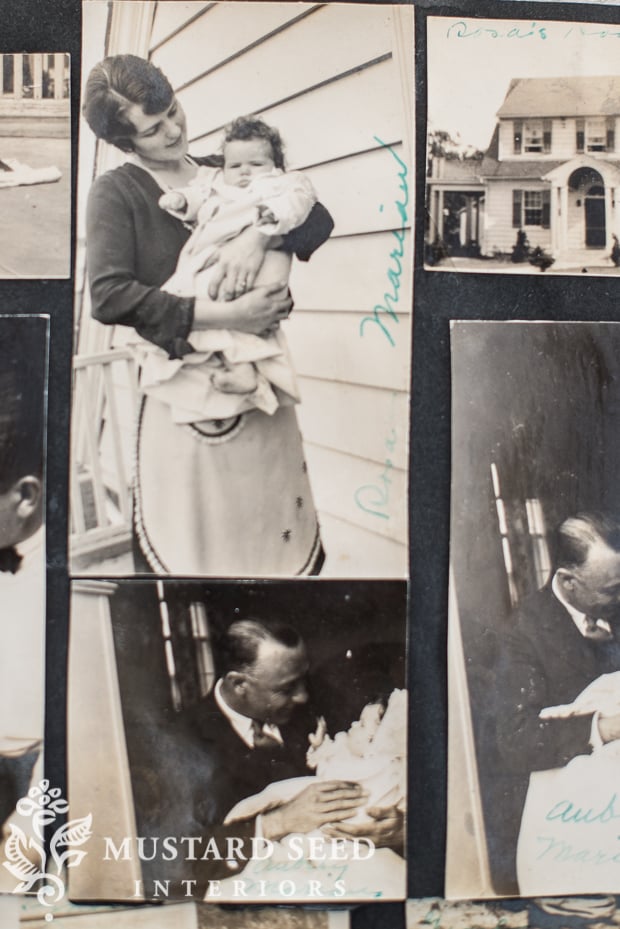 This does take a lot of work in the beginning and then upkeep through the months and years, but once you get a taste of the freedom from your “stuff problem”, you’ll want to keep it up.

From a fellow former stuff-lover,