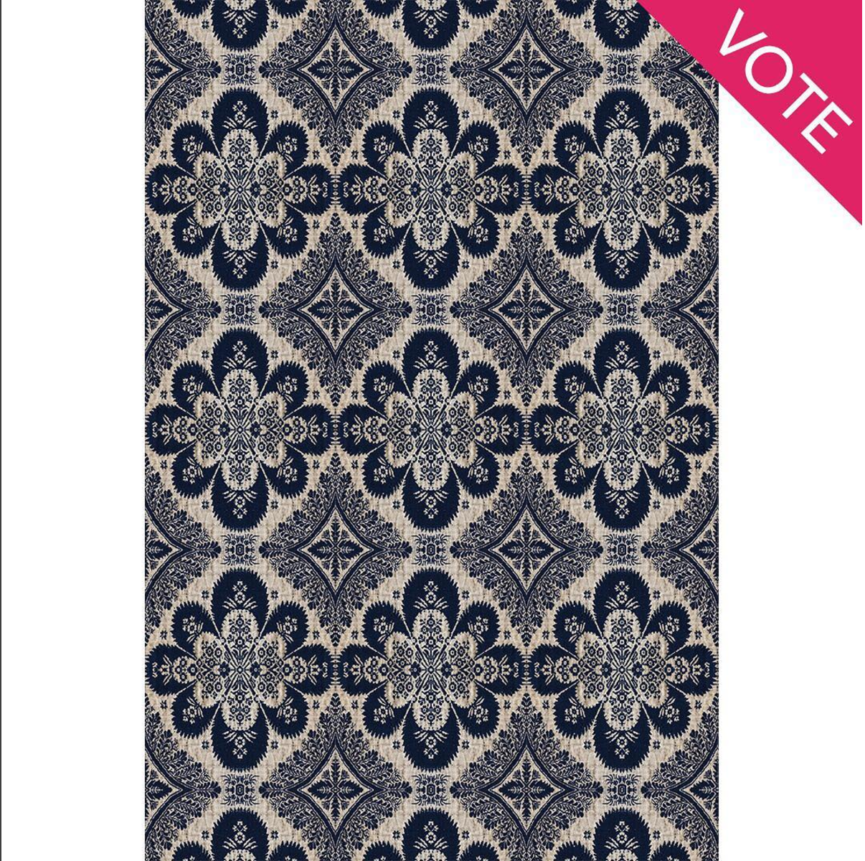 As I shared in my last post about the Dash & Albert Rug Design Competition (click the link to see what it’s all about), I used an antique coverlet as the starting point for the designs.

This one, to be more specific… 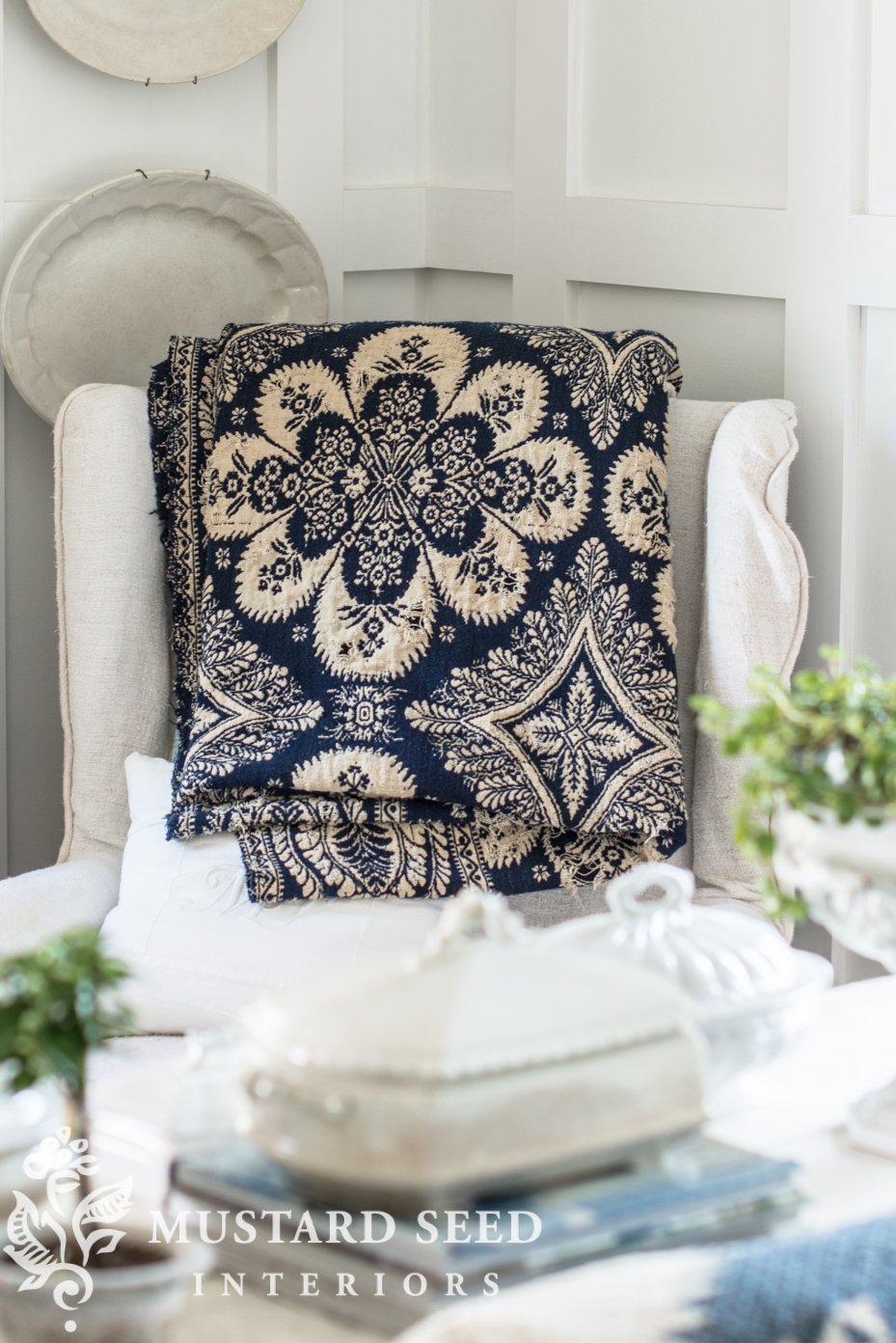 When I was initially asked to join the competition, these designs, which I had already worked on for a different project (I didn’t end up using them for that), seemed perfect.

Prior to submission, I clarified with the competition organizers that reworking antique designs was permitted.  They not only said yes, but told me the designs in their existing lines that are based on antiques are often the most popular.

So, the design process started out with taking choice pictures of sections of the coverlet.  They needed to be sections without stains or holes (or with the least amount) and I had to capture enough of the design to create a repeat.  I also took a picture with a ruler, so we had a reference for scale. 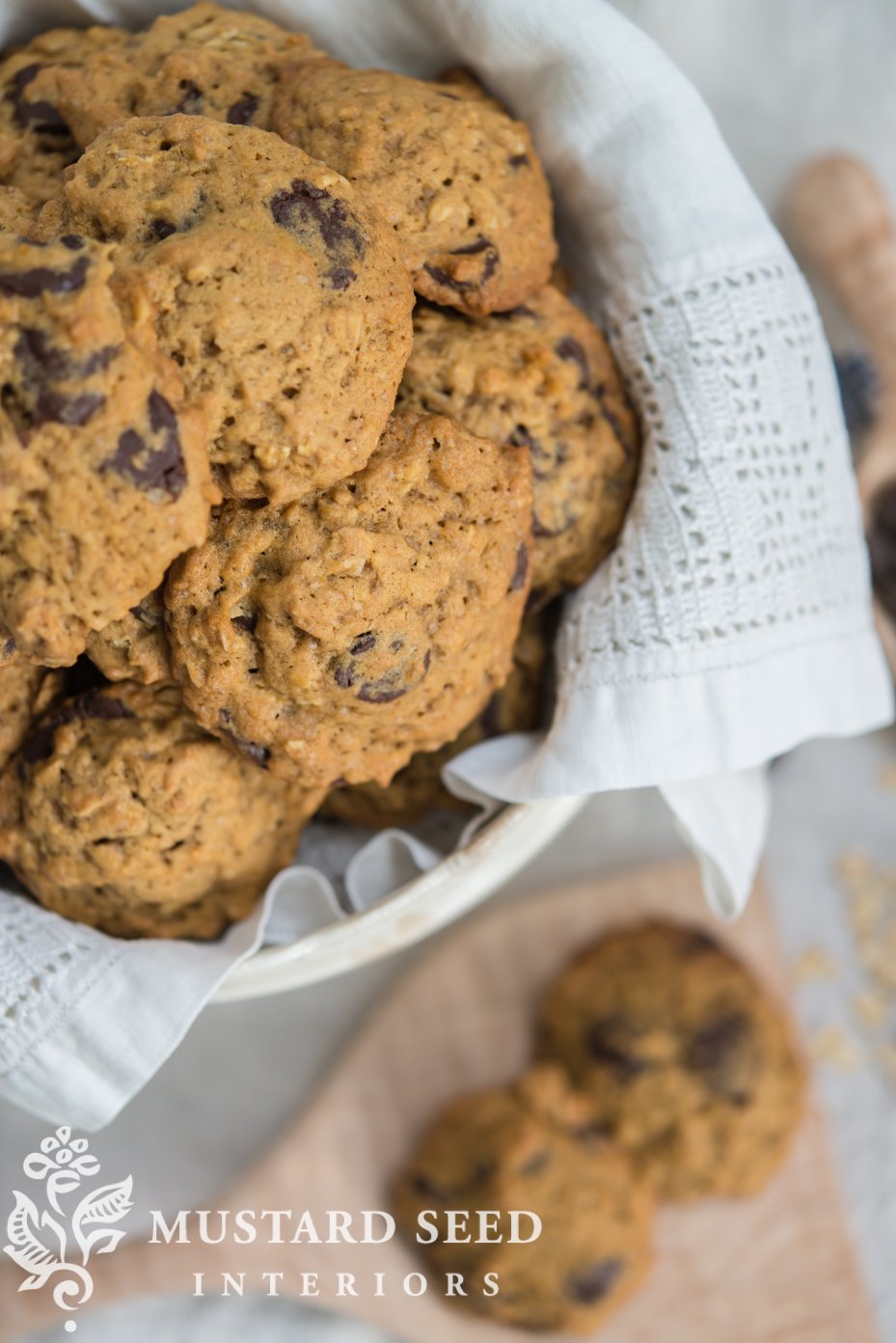 I say “we”, because my assistant, Heidi, was key in making this project happen.  She is a whiz in Photoshop and other design software and I am not.  She is also a whiz at taking my notes and making them happen in reality.  So, I sent high resolution images of the coverlet to her and explained how I wanted to rework the designs.  It went something like…

Me: Can you take the border and blow it up, so you just see the large flower centered and the scrolly things on both sides?  And then, can you take that squiggly edge trim thing and make it a border?  With mitered corners?

This would usually happen over Skype, because it was too complicated to try to upload my brain to hers through an e-mail.

She would work on what we discussed and submit something when it was ready.  We would bounce it back and forth, tweaking the design until it looked the way I imagined in my head.

Or sometimes the way I imagined it in my head didn’t end up looking as good as I thought it would.  For example, the “Border Stripe” design was originally lined up in uniform rows… 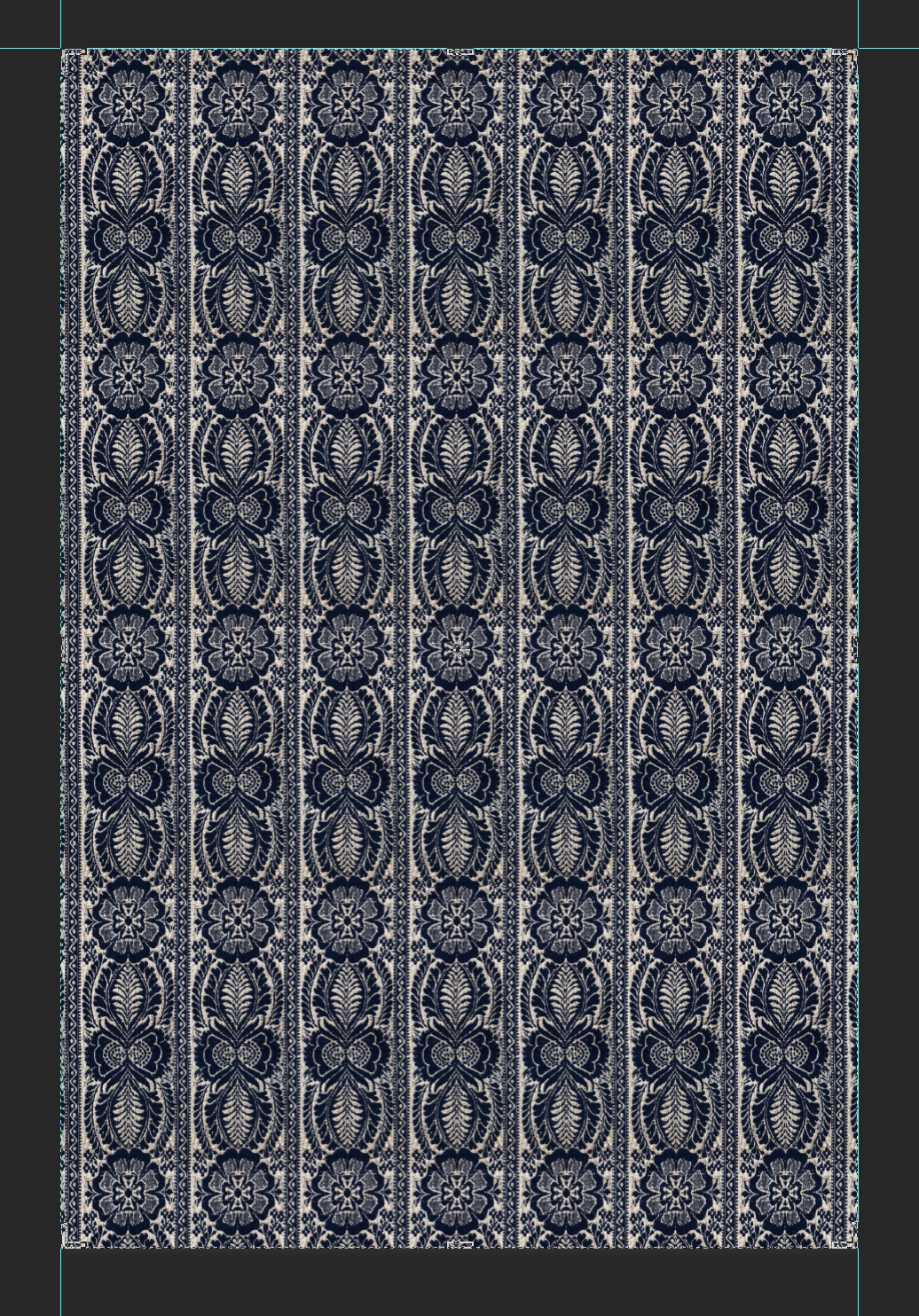 There was something about the vertical and horizontal patterns going on that didn’t work for me, so I asked Heidi if we could offset the stripes… 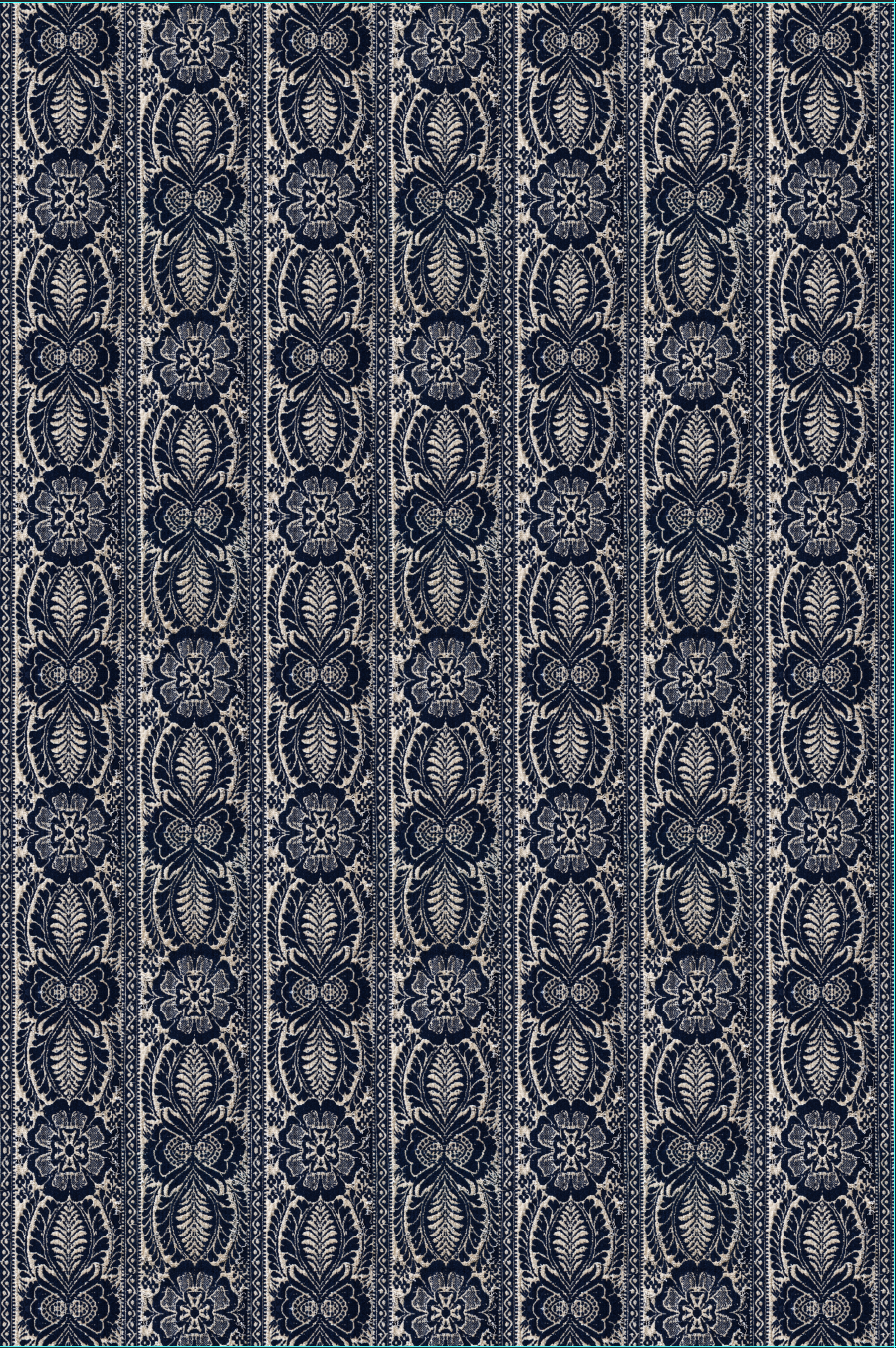 …and I liked that version much better.  The horizontal pattern contrasted the vertical stripes with a diamond shape.  See that?

I fully admit that I don’t know what I would do without Heidi.  I’ve told her she can never grow up and get a real job.  It’s funny, because she is a grown up and this is her real job.

She’s worked for me for years and we actually just met (in real life) in January of this year for the first time. 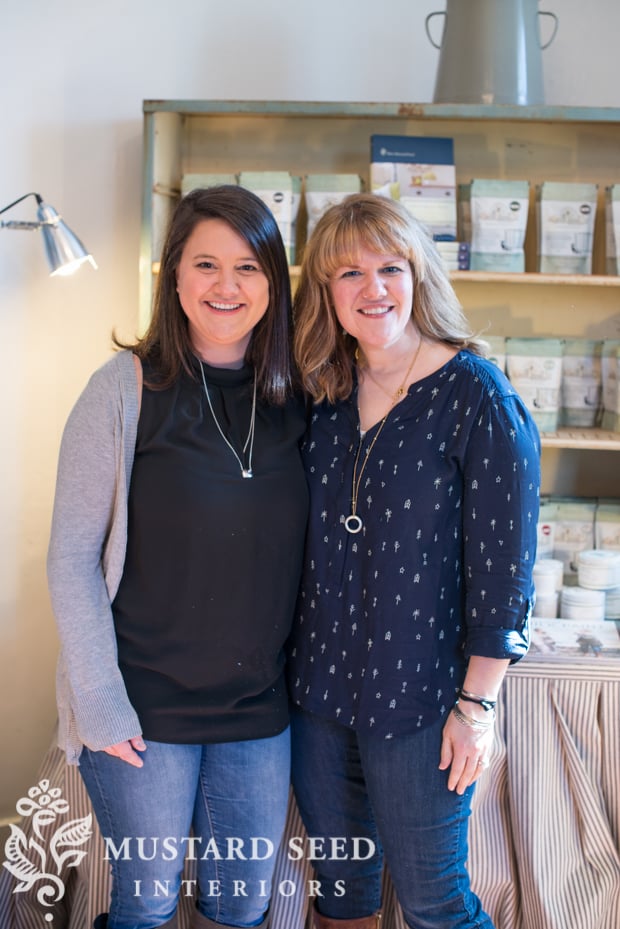 Anyway, we did work on some other designs that I ended up not submitting.  (I had to slim my submissions down to three.)  One of them was based on this antique coverlet I made some pillows out of… 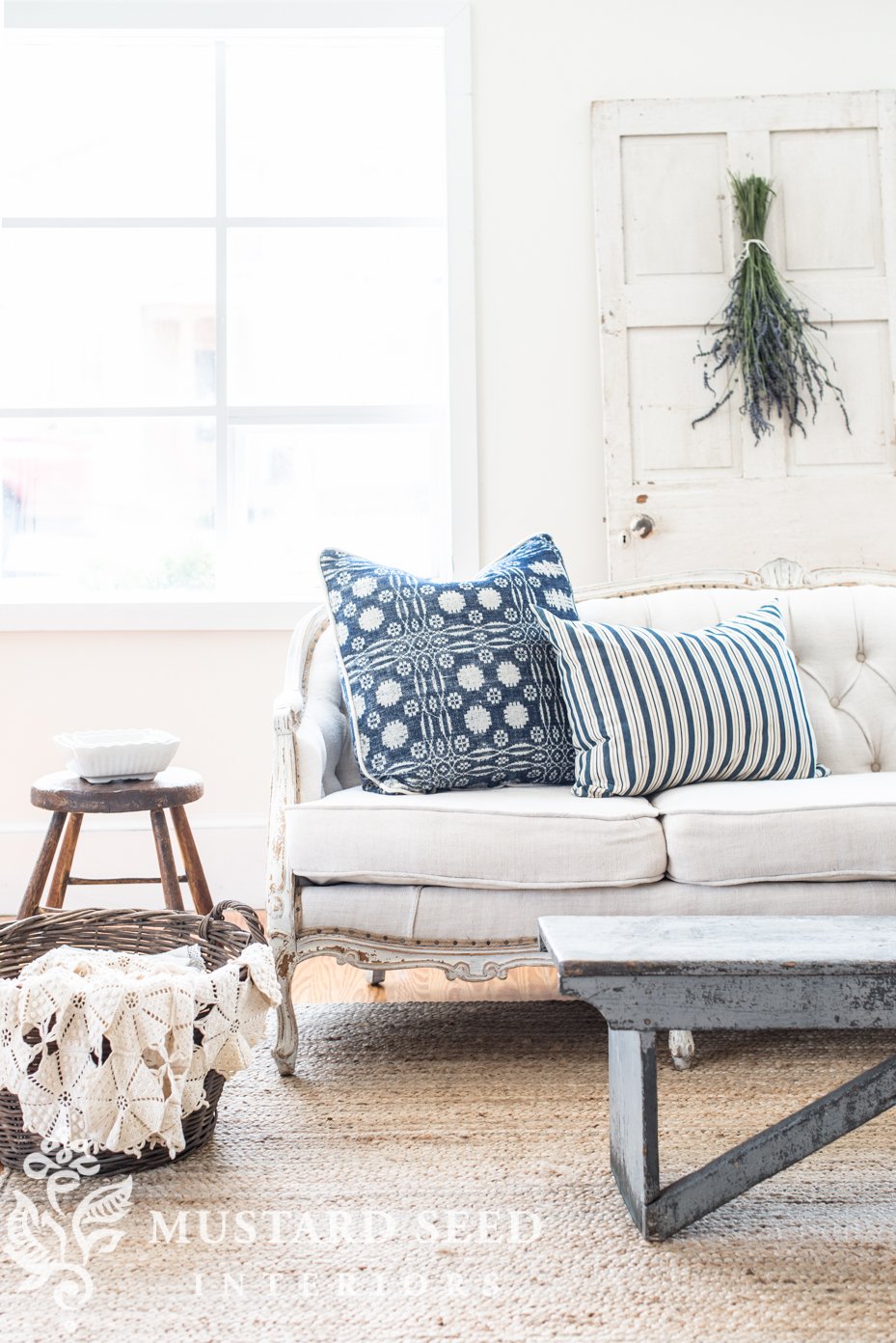 We modified the design a bit, which you will likely only notice if you really look closely at it!  While I like the design overall, it looked a little dark and not quite as interesting as the other three. 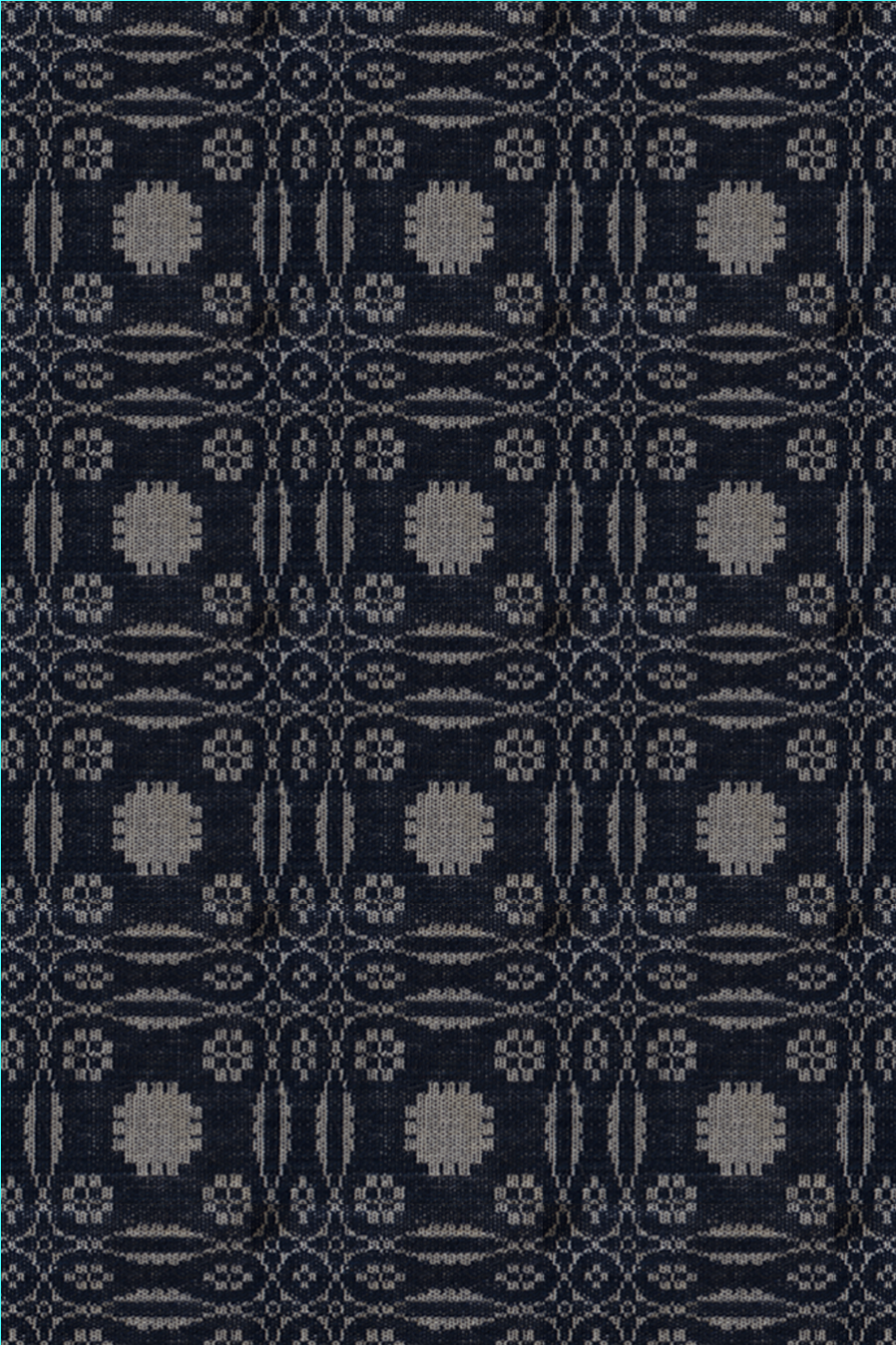 I also felt like it needed a border or something more to finish it off, but I ran out of time to tweak it further.

In the end, I submitted three designs that are all based on the same coverlet.  I like that they “go together”, but they each have their own look.

The voting for the Dash & Albert rug design competition is already under way.  If you haven’t voted, go over to Annie Selke’s Instagram and ❤️ the ones you like.  The nice thing about this competition is that you can vote for any and all of the designs you like, so you don’t have to pick just one.  Dash & Albert will produce the top 10 rugs based on the number of likes, so this is pretty high stakes! 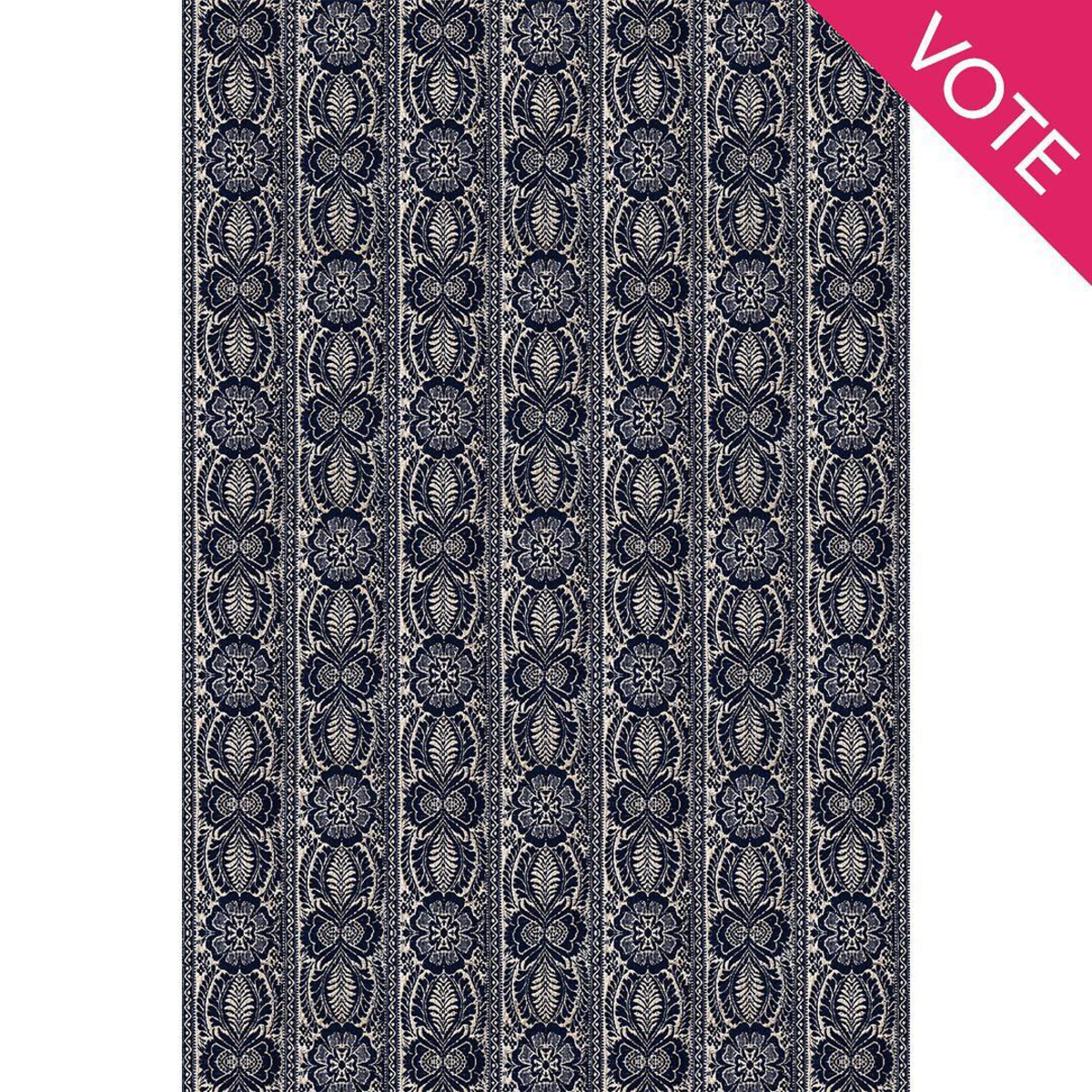 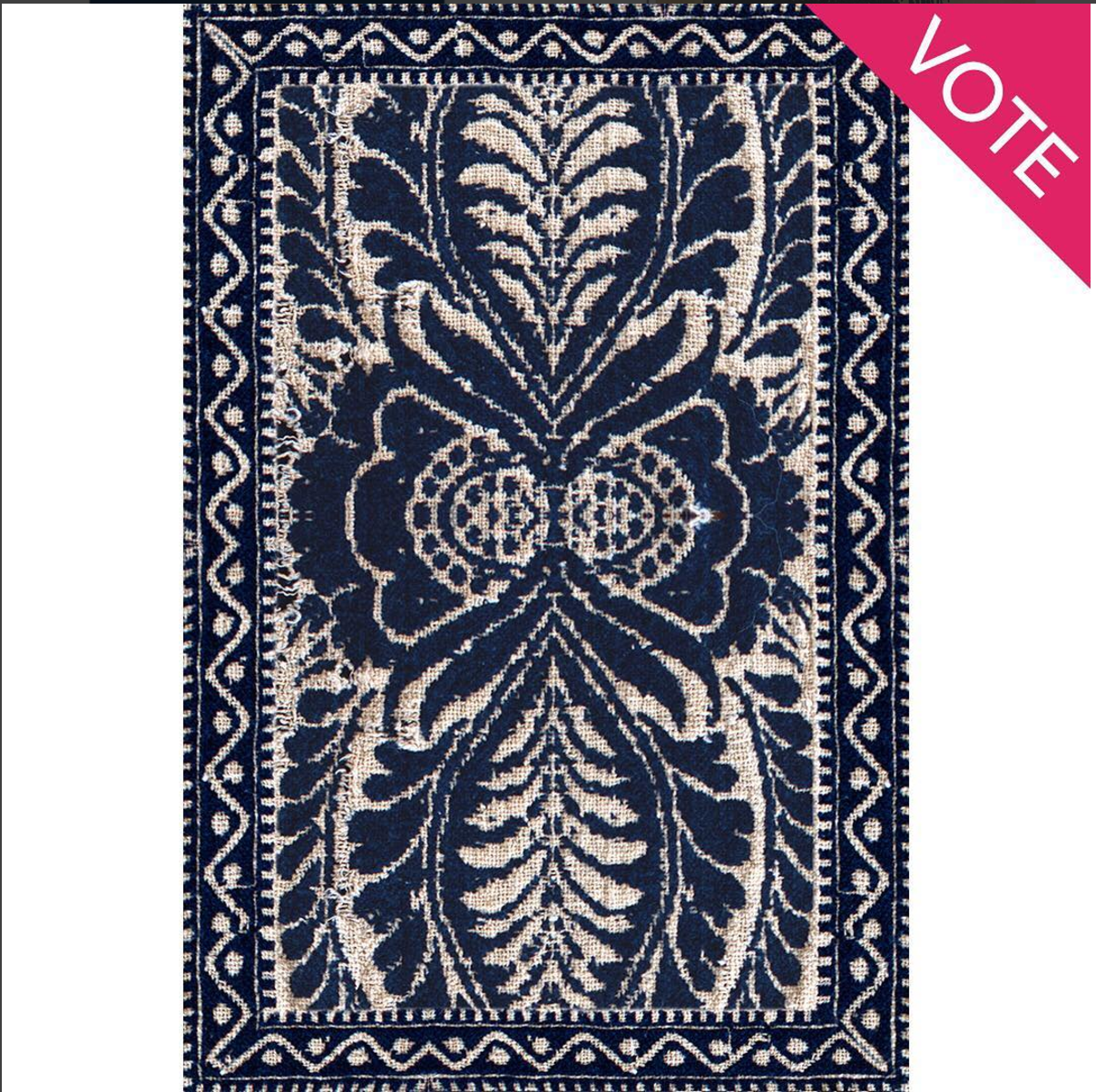 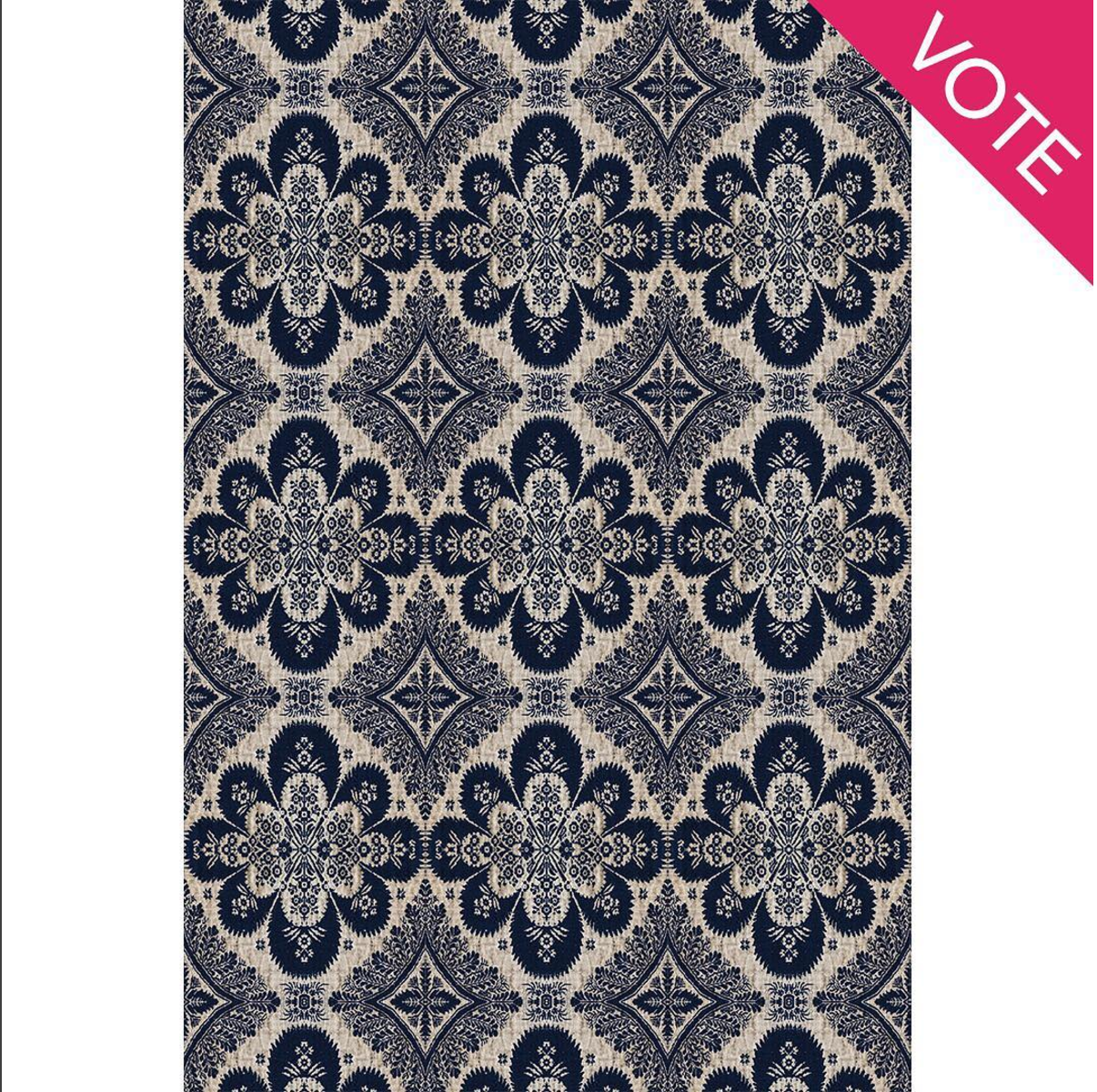 Let’s do some oil painting together (from a distance)