I hope you had a lovely fourth of July!  We invited some friends over from our church and then watched fireworks from a vantage point near our house.  It was low key, but everything July 4th should be…burgers, corn on the cob, macaroni salad, sparklers, and friends.

Other than that, I’ve been doing some projects around the house, like finishing the front garden, helping Jeff with organizing the garage (he’s building shelves and then I organize), trying to fix/install a new doorbell (which has been more challenging than one would have thought), making multiple trips to Home Depot for materials and supplies, and working on an unexpected, totally not-fun project that popped up on July 3.

If you follow me on Instagram Stories, you know I had a funky smell in my van and came to learn it was emanating from a dead mouse.  I know!  I absolutely could not believe it.  I have never in my life even heard of rodents getting into cars much less expected one to be in my van!   I removed “the body”, but have been dealing with removing the smell ever since.  After Resolve, Febreeze, vinegar, lemon oil, peppermint oil, lavender oil, coffee grounds, baking soda, and finally, the big guns – Nature’s Miracle, I think I’m ready to claim a tentative victory.   I have worked on cleaning every nook and cranny of the van for hours, though, so it’s been a real time-hog over the past few days.

The  bright side is that I have a really clean van and some of the messages I received through Instagram gave me a sense of humor through it all.  I learned having rodents live/die in your car isn’t that uncommon and I could’ve had it much worse.  The bad news is I will always be a little jumpy when I’m unfolding our back seats!

As I shared in a previous post, we have two cherry trees (and an apple tree) in our yard.  I wasn’t expecting fruit tress in a suburban yard, so it was a nice surprise and like a little gift from the previous homeowners. 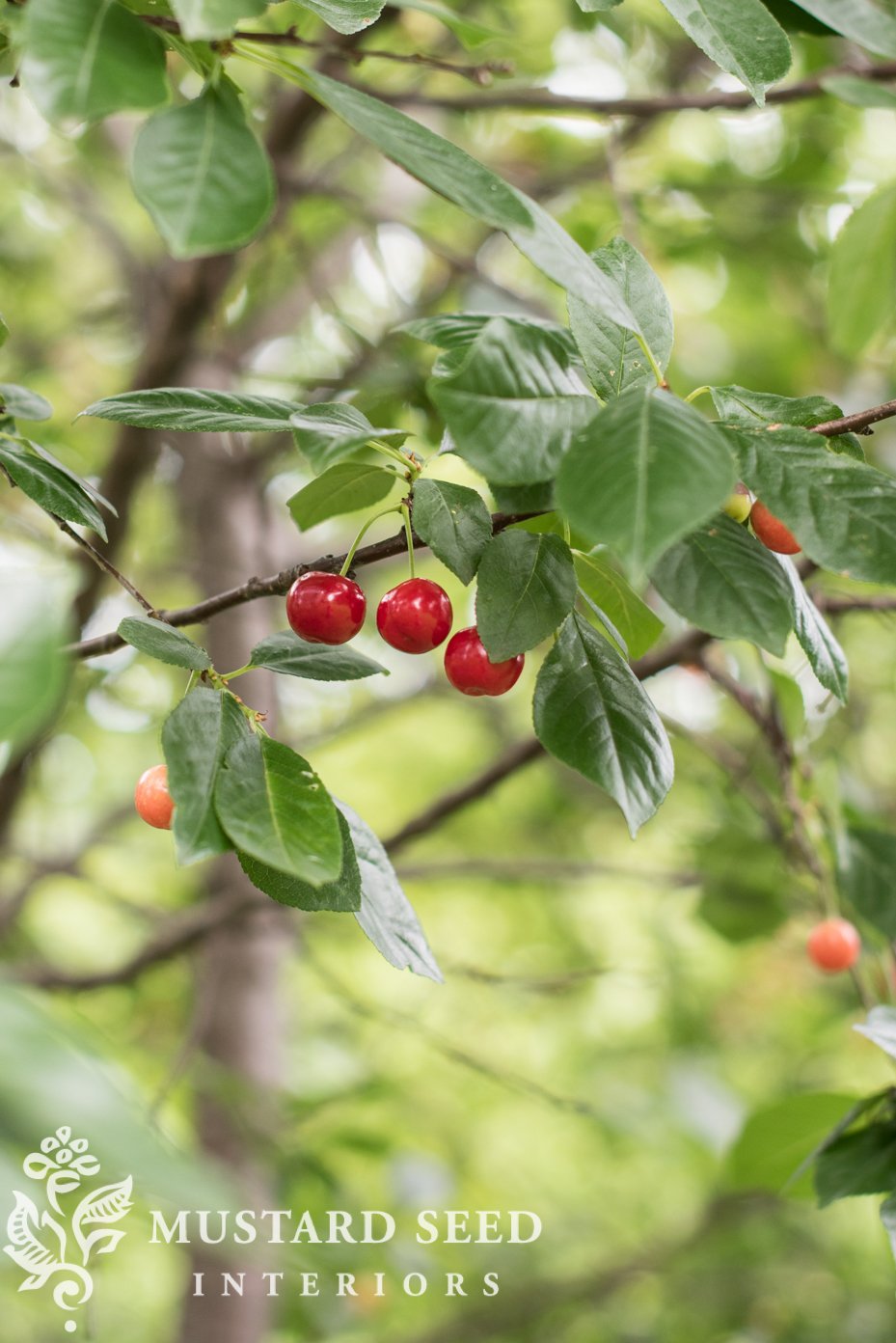 The cherries were ripe and ready, so Marshall and I went out one morning and picked some.  He loves climbing trees, so he was excited to get up in the tree and gently lean on the branches, so they would be low enough for me to reach.  We picked a nice basket full and they were so pretty! 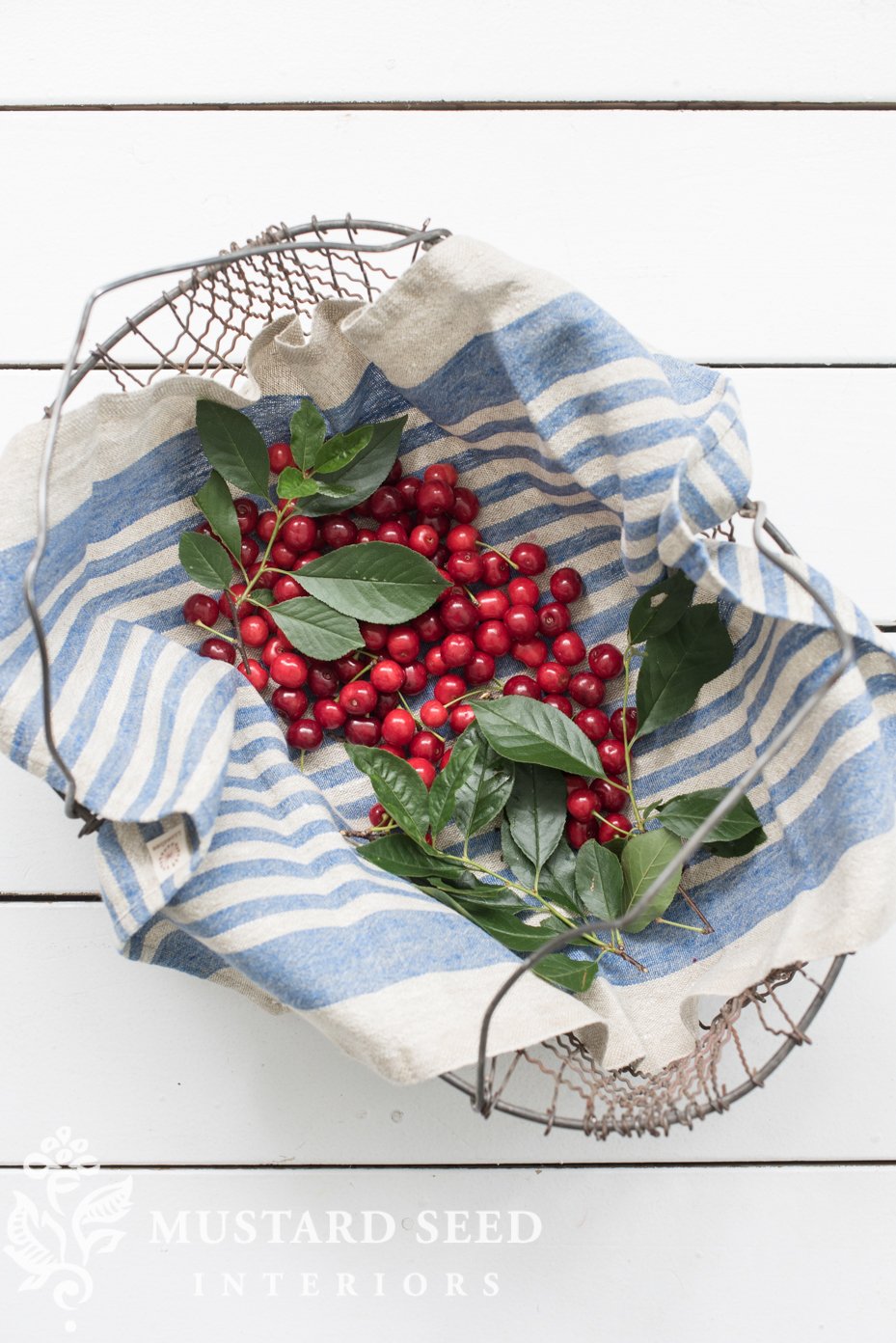 I am about 95% sure these are edible cherries, but I didn’t know for sure, so I e-mailed pictures to the DOA extension to see if they could identify the species and confirm the cherries are edible.  I haven’t heard back as of yet.  Unfortunately, the squirrels and birds have now picked the tree clean (another sign they would probably be fine to bake into a pie or jelly!) 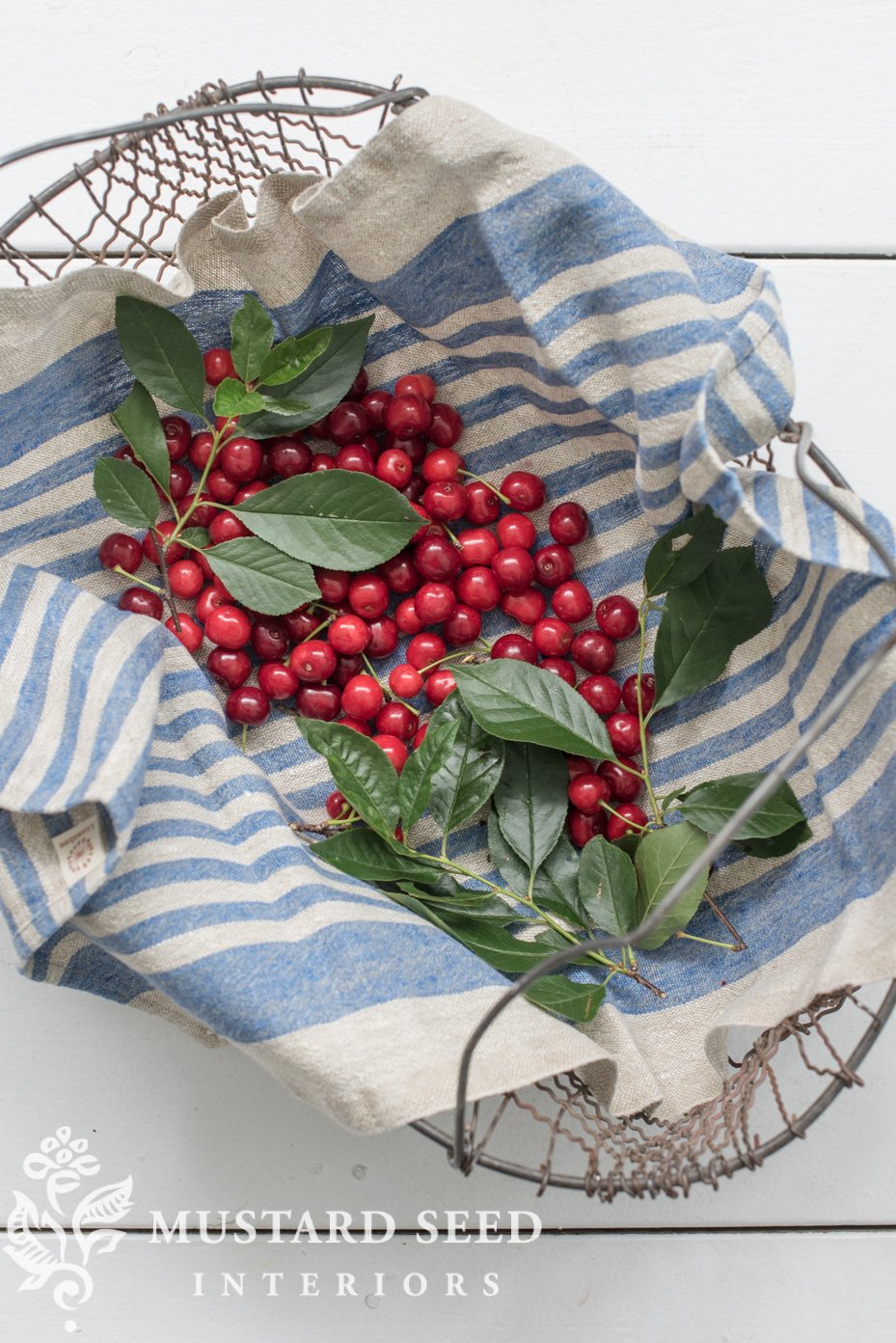 Hopefully, we can identify the tree before next year’s season, so I can bake with some and give some away.  Calvin’s already talked about having a pop-up tart cherry stand to make some money! 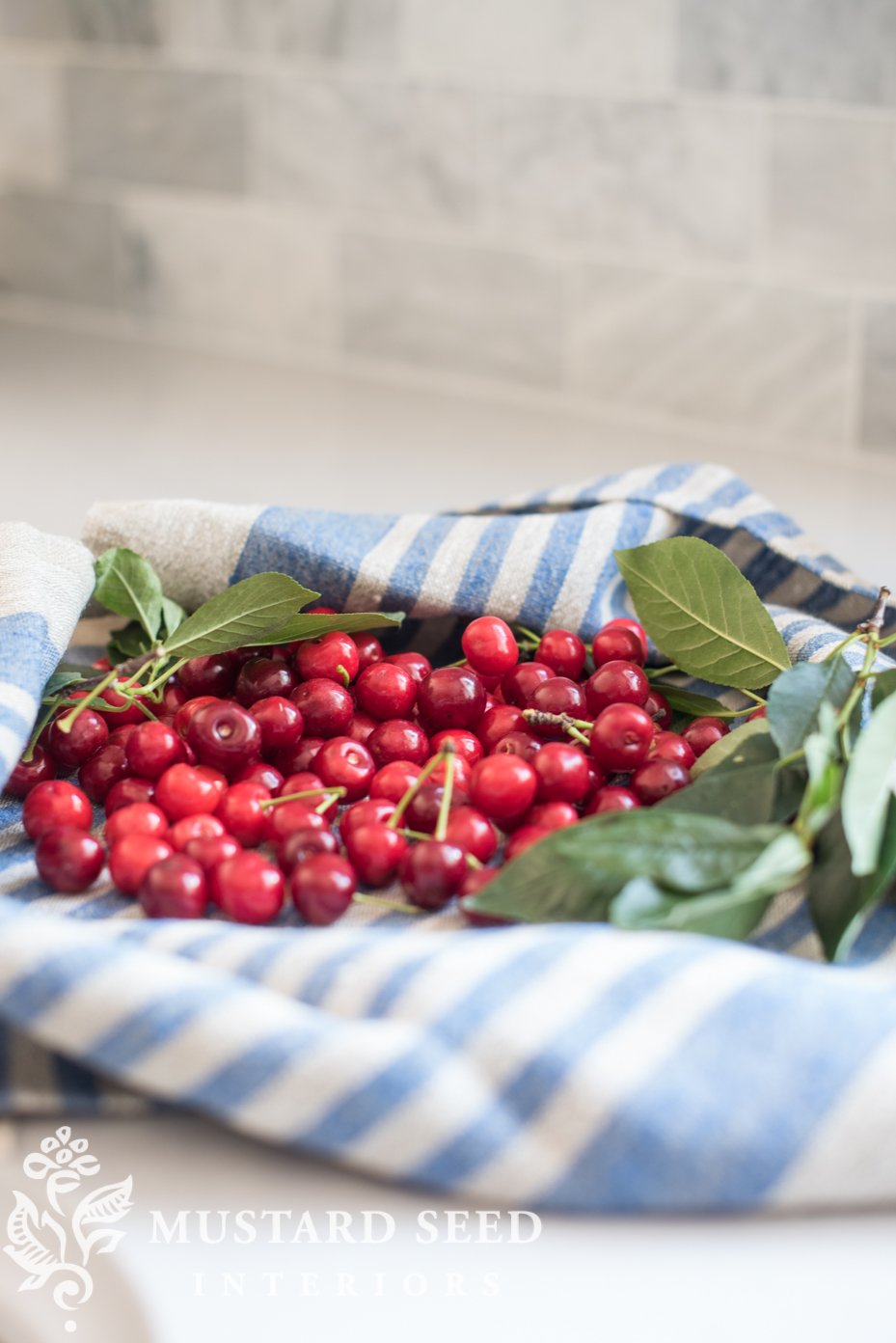 Even though we didn’t get to eat them (it just wasn’t worth assuming they were okay to eat), I enjoyed picking them and taking the pictures. 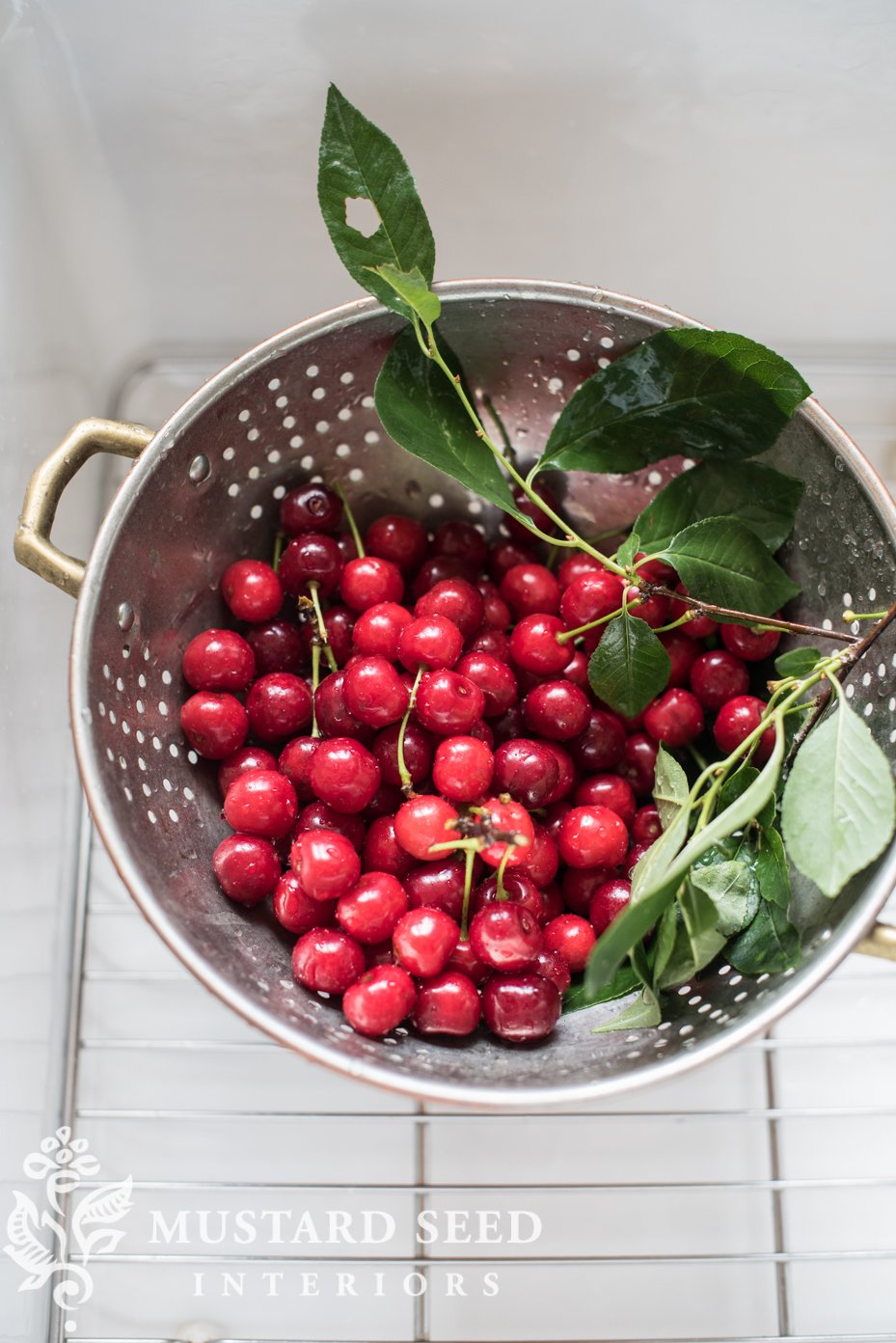 I’ve got some recipes for tart cherry galette and slab pie in the hopper for next year.