The plumber came yesterday and was finally able to get our pipes situated for the pedestal sink. Whew. I had no idea a little bathroom would be so involved and would take so long. Now, we’re waiting for the tile to be installed, which can’t happen until next week. So, I sat and dreamed for a little bit this afternoon about how we were going to handle the back wall with the radiator and the former window to nowhere.  I sketched out this plan… 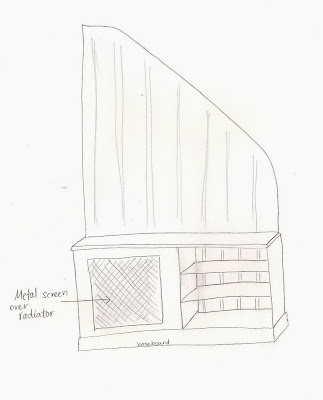 We are going to cover the entire back wall in bead board (it will be 3/4 height around the rest of the room) and build a radiator cover/shelf to hide the rad, provide a little storage and give a clean line where the tile can stop.  Apparently it’s a bear to tile around these old radiators, so we’re just going to cover it up, which will look sharper, anyway. That’s going to be the project this week while we’re waiting for the tile guys. 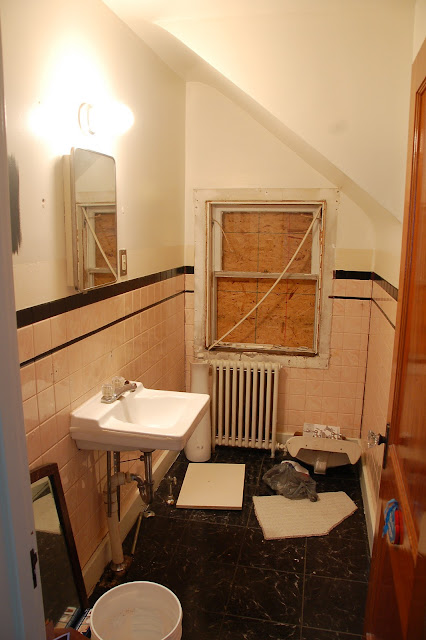 I wanted to make some progress today…it’s sort of like rolling your car a little when you’re in a traffic jam.  It lifts your morale to know that the tires are turning…so we removed the sink.  One thing that people don’t normally mention about bathroom makeovers is there are some funky smells when you pull out sinks that have been in place for over 60 years.  Also, someone lost their lime green comb back there a few decades ago. 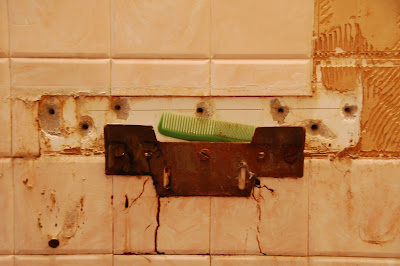 I can’t wait to cover all of this in crisp, white bead board.  Heaven on a wall.
It is a good thing we’re getting a new sink.  When my husband pulled out the old one, the bottom of the u-bend just disintegrated.  It was corroded, but hadn’t broken through yet.  It was a mess waiting to happen.
Last night I was in a mood.  The kind of mood where you just need to get out of my way and let me work.  My office has been a problem for a long time and I was sick of it.  I’m constantly tripping, putting things where they don’t belong, breaking things that fall from precarious positions.  It was just ridiculous.  I am usually a very neat person, but I’m messy when I’m creating, so my office is in a constant state of creativity bomb aftermath.  (This picture was taken after I started pulling things off shelves, so it’s normally not this bad!) 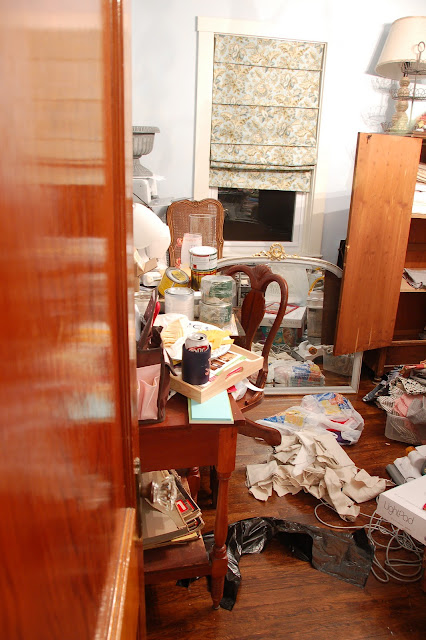 I dumped everything off every shelf and cut my stuff by about 50%.  I filled up the back of my husband’s pick up truck with trash bags and boxes of fabric, craft supplies, things that were broken, etc.  I was struggling at first, but I realized that I’ve been hauling pounds of fabric around for years “just in case.”  Half the things in my office were “just in case” and it was impeding me from working on things that are “now.”  I couldn’t find what I needed when I needed it, so I bought multiples of things I already had.
It was time.  I was ruthless.  It was total carnage. 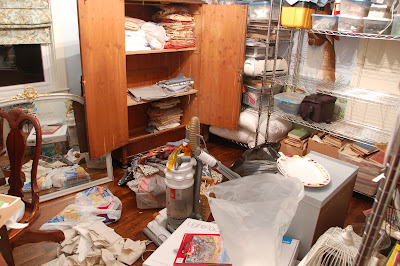 I needed lots of DDP (Diet Dr. Pepper) and snacks to keep me going, but I finished it around midnight. 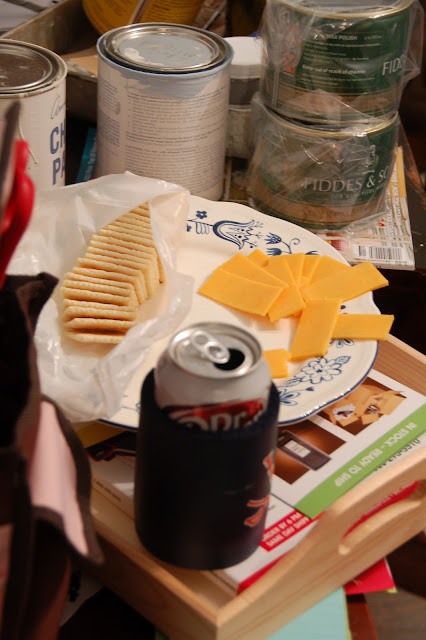 It ain’t pretty, but it’s organized.  The things I used most are easily accessible and the “occasional” stuff is out of the way. 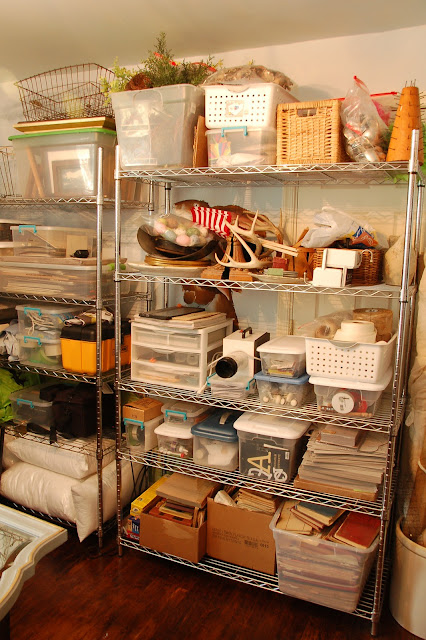 All of my decorating and resource books are color coded and easy to grab.  I don’t feel like a cascade of boxes is going to fall on my head if I get too close to this shelf anymore. 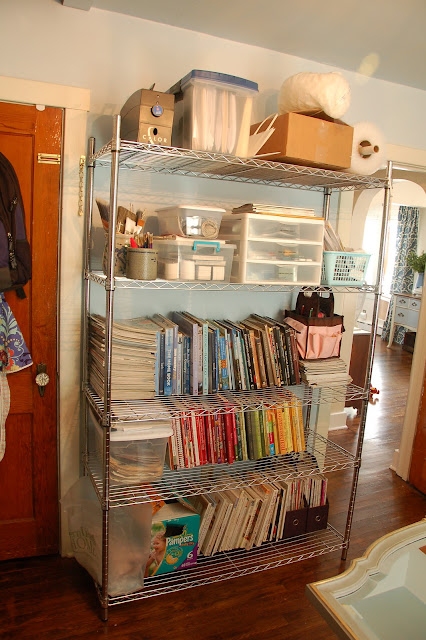 My fabric cabinet was thinned out by about 60%, which made room for my sewing machine, iron and notions inside.  As ruthless as I was, I couldn’t get rid of some of my French toiles.  I know they’re not the hot thing right now, but I still love toile and I think it’s timeless when used well. 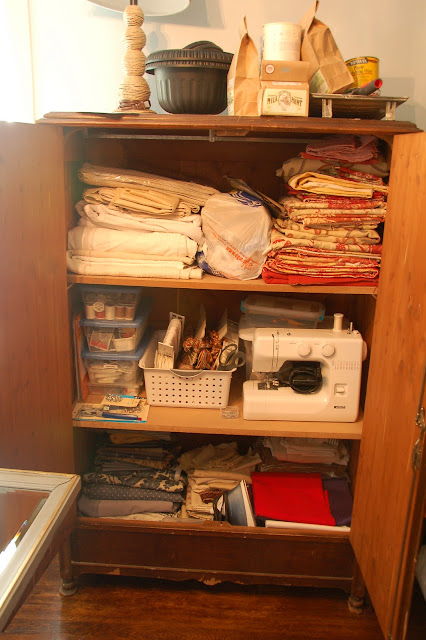 I collected notes and sweet things people sent me and pinned them to my bulletin board.  They are really an encouragement to me. 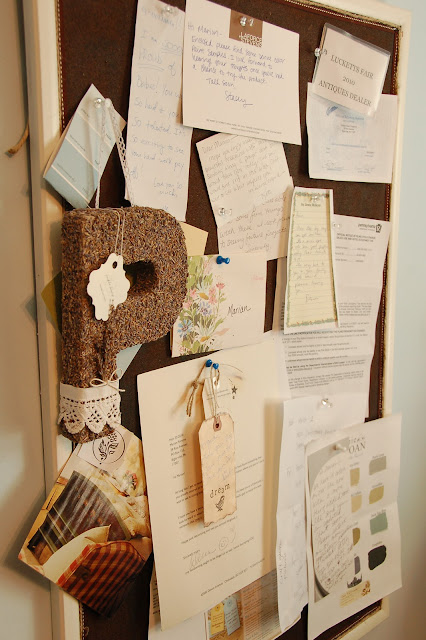 And these things deserved better than being at the bottom of a messy pile.  (Jami from Freckled Laundry made me this lavender “P”.  I love her tag, so I left it on.) 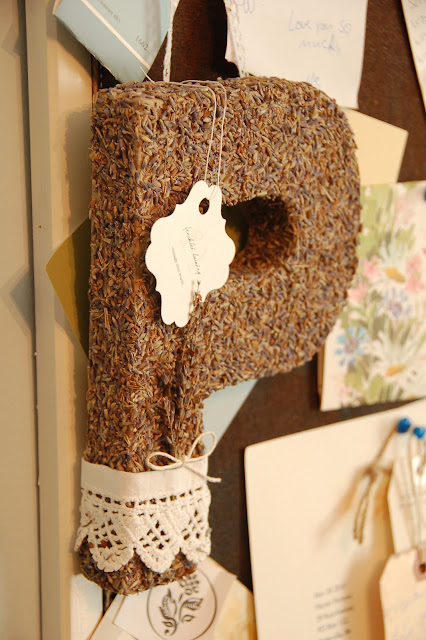 I felt great when I went to bed last night, although I’m a little tired today.  Now, I’m ready to focus my attention on my Cottages and Bungalows project for the July issue, my HGTV.com projects and my move to Lucketts, which happens next Saturday! This week, I’ll answer some questions and share more about chalk paint, milk paint and waxes.

I linked this up to Whisper Wood Cottage’s Workspace Showcase.