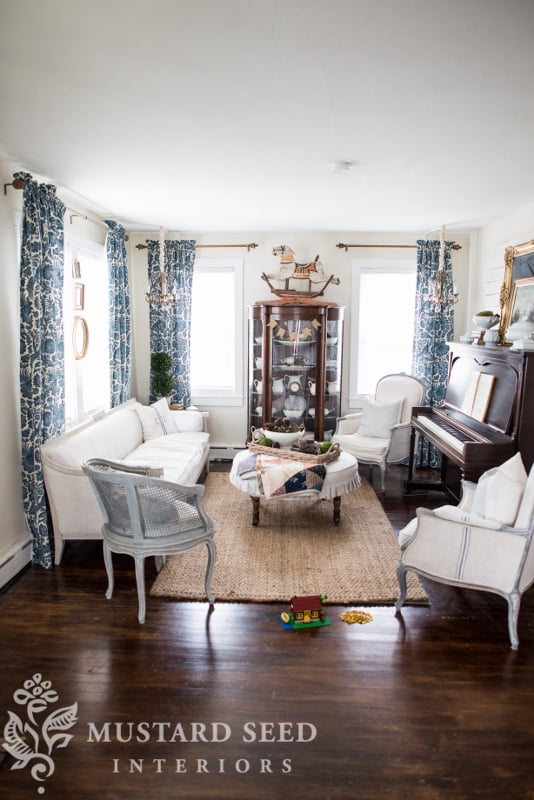 New year’s eve has never been a big deal to us.  One year I did go to a party with my Opa.  My Oma had just passed away that year and he didn’t feel it was appropriate to bring a date and he didn’t want to go alone, so he asked his granddaughter.  I drove up with him from Florida, got dolled up in a silver sequenced shirt (my friends called it my disco ball shirt) and I danced in the new years with people old enough to be…well…my grandparents.  It’s probably my favorite new year’s eve ever, though.  I even sang some standards with the band.  I didn’t intend to tell that story, but the memory popped in my head as I started this post, so I just tucked it in.

Anyway, onto today.  I should start off by telling you I have been bed bound most of Sunday and Monday because of my back.  I wouldn’t say I have a bad back, but a slightly arthritic back…yes, at 35 (hold me)…and it gets strained now and then.  Usually it’s from lifting too much, tweaking it in some funky way or from pushing too hard when I’m working out.  I am trying to get better about knowing my limits, but trying is the key word.  I don’t have it figured out, yet.  I happened to tweak it this time just getting out of the van to go to church.  I was carrying a couple of bags and was thrown off kilter.  Sitting in metal chairs and then the pew didn’t help and I spent Sunday afternoon and evening laying in bed with heat on it.

Yesterday, I had a babysitter for the boys, so I was a good girl and rested in bed to give my back a chance to heal.  I did inform my babysitter that me laying in bed while someone else watches my kids isn’t my usual habit!  Despite laying down most of the day, I did get a lot of work done on the MMSMP look book, some website stuff, blog stuff, e-mail, etc. but I hated feeling like such a loaf.  I feel the best when I can be up and about and active.  I was whining a bit to Jeff about it and he reminded me that this is what God has for me and I should be thankful for it.  You can hardly argue with wisdom like that and I adjusted my attitude.

So, today, my back is still sore, but it’s feeling so much better and I decided I was going to get some things accomplished.  The main thing I wanted to do was to get the stuff accumulated during Christmas put away.  We took the tree down a few days ago, so a lot of the presents were just piled on the floor where the tree was.  We also had Legos, “guys”, toys, cards, candy, etc. sprinkled all over the house.  Trying to make it easier on myself, I made a basket of things that needed to go upstairs… 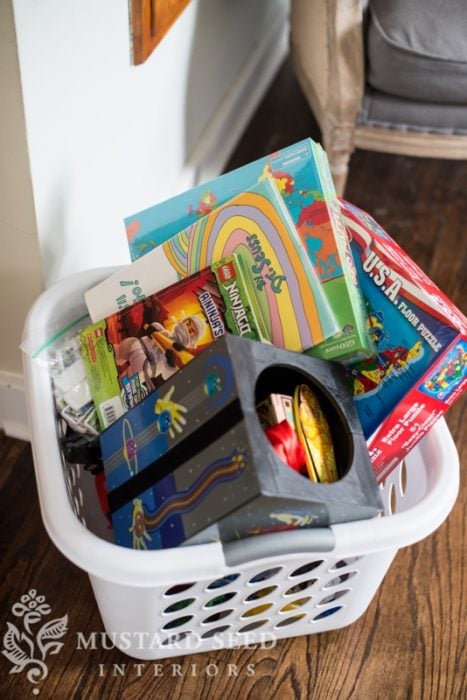 …and another for things that needed to go downstairs. 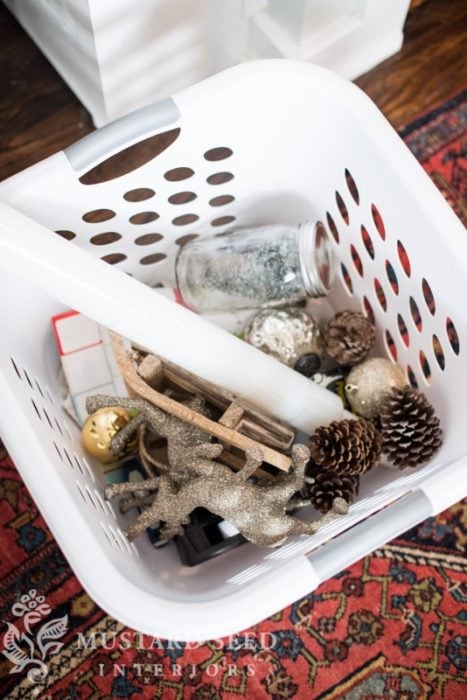 I was making nice progress and then stopped to take some pictures of the living room to show how it looked without the china cabinet that I sold this weekend. 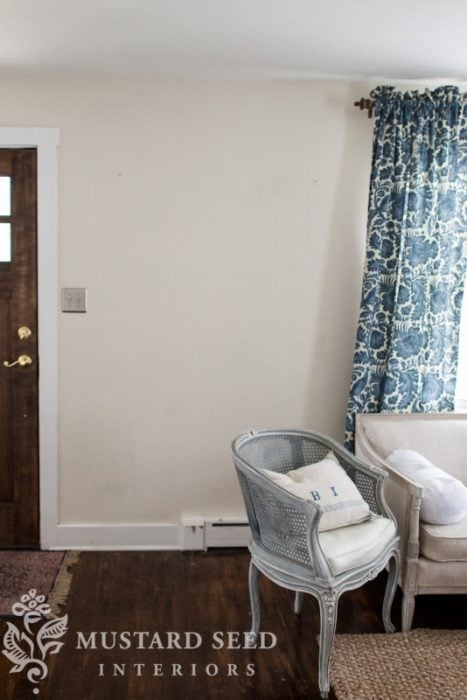 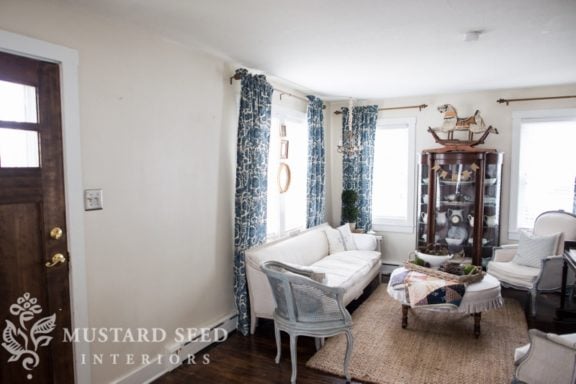 That innocent photo session is what set everything in motion.

I cleaned up the Legos for the pictures and left the room to get my camera.  By the time I came back, both boys had reintroduced the Legos in the room and were playing.  Well…let’s just keep it real here and let the boys play.  I can take pictures around them. 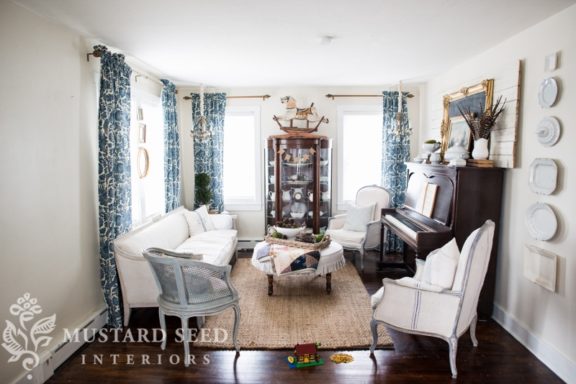 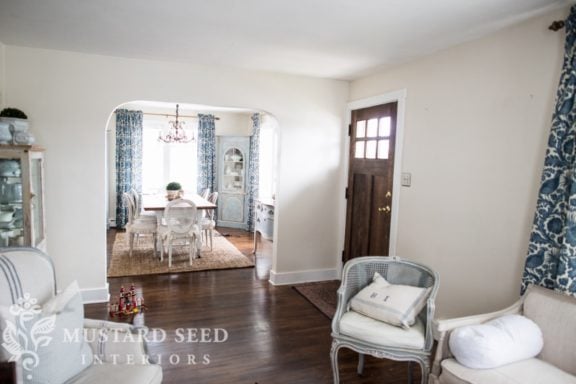 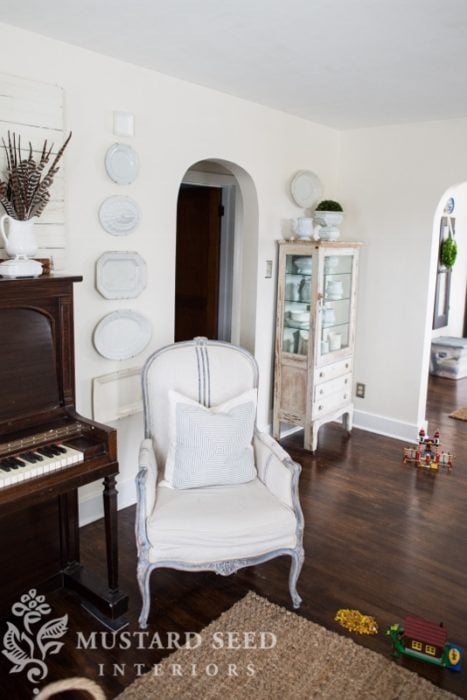 As I was taking pictures and thinking about my “plans”, I decided I would try moving the sofa. 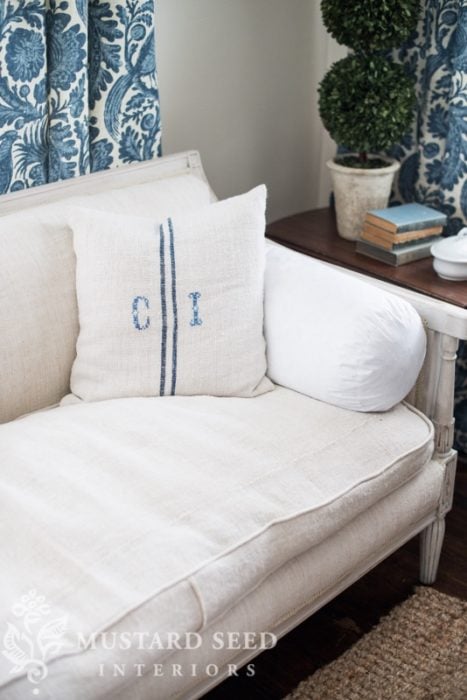 Everything in my house is on sliders, so I can just scoot it.  That’s taking it easy…  You can all see where this is going, right?  Moving one piece turned into rearranging half the house, me ending up in a rather precarious position when an antique door tipped over, a broken piece of ironstone (sniff), more scooting and moving furniture from one room to the other and…yes…eventually a sore back at the end of all of it.  I can really be so foolish sometimes when I get excited about decorating.

And the Lego playing happened as if nothing unusual was going on.

I guess in this house that’s true. 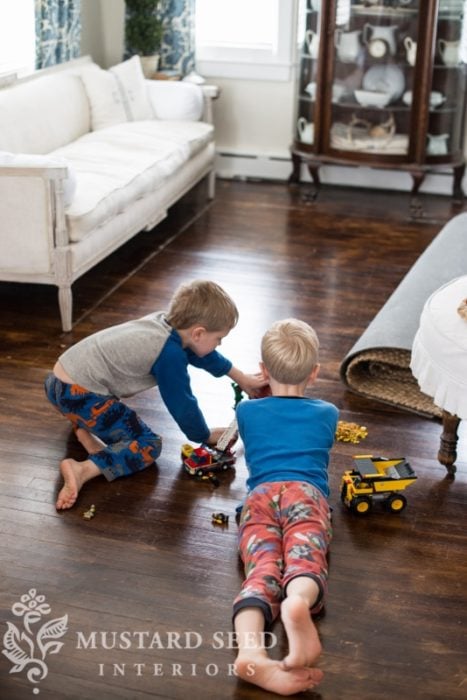 About halfway through, I realized Jeff was going to chastise me for working too hard and, at the same moment, I realized there was no way I could downplay a totally rearranged house and me with a heating patch on my back, hobbling around once again.

As I said, we don’t do much for new year’s eve, so we went out with my parents to Target and Panera Bread.  Jeff came home from work and we all got ready to go and he didn’t even notice.  I’VE DONE IT!  I’ve gotten him to the point where furniture rearranging is so common that he’s numb to it.  It’s only taken 15 years, ladies.  Don’t give up hope on your men.

Seriously, though, all of this furniture arranging has to do with my desire to purge and not have anything in the house that isn’t something we need or love.  It really is a totally fresh approach to decorating for me.  I know that may sound silly to some, but it’s a revelation to me.  I’ve always loved stuff.  I love shopping for stuff and buying stuff and finding a new home for it.  If I liked old typewriters, one was good, but four was better.  Dealing in antiques over the last few years has helped that, in that I can sell most of the things I find, but it’s also enabled me.  Anything I bought that I really loved, which was a lot, I would try to fit it in my home.  Often times, like in the case of the china cabinet, I was forcing something to work, because I really wanted it to.  Now, I’m just letting stuff like that go.  I love it, but it’s not perfect for my space.

And the more I’m getting rid of, the more I want to get rid of more.  My mom joked that I won’t have anything left. 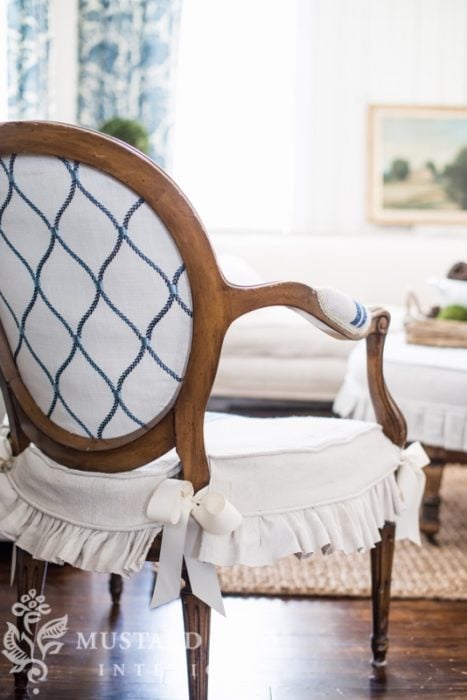 I have added a few more things to the mental list of things I want to sell.  I think the rocking horse is going on it… 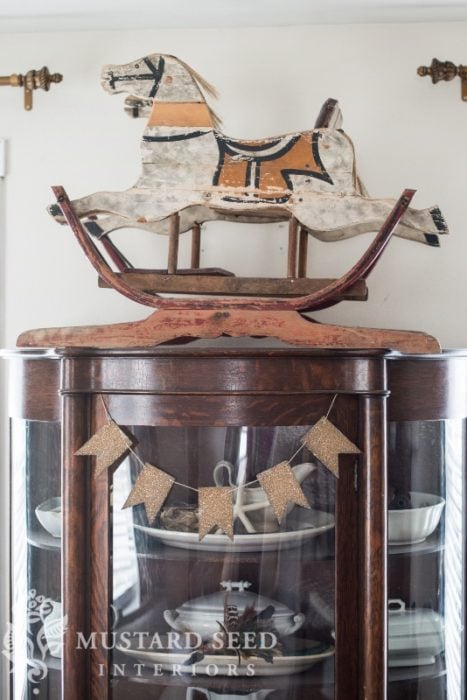 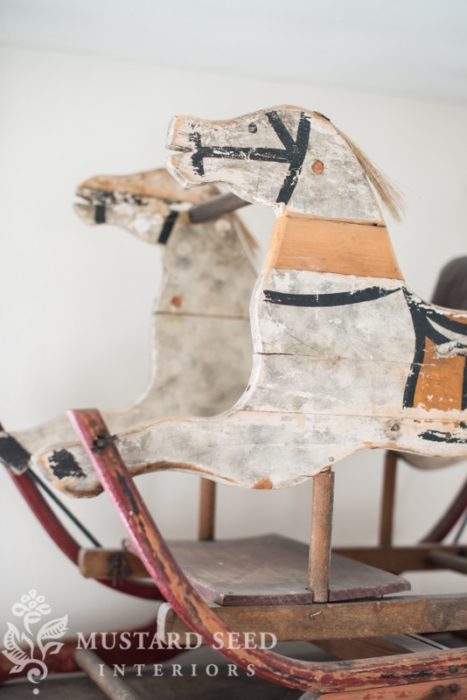 As well as the round upholstered ottoman in the living room (that we made as a tutorial for the book) and possibly the curio the horse is on.  That’s a family piece, so I’m making sure no one in my family wants it before I offer it up for sale.  It belonged to a great, great aunt I didn’t really know, so it doesn’t have any sentimental attachments for me.  I think I may be selling a pair of French cane chairs as well, but I need to wait to get my new family room sofa and see how things shake out before I decide on that.

So, what were you doing new year’s eve?

PS – I’ve been singing that song all day as I shuffled furniture around. 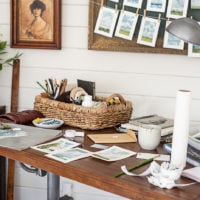 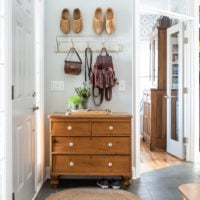 antique pine chest in the foyer 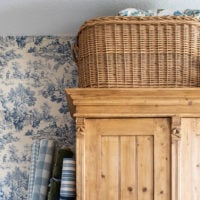 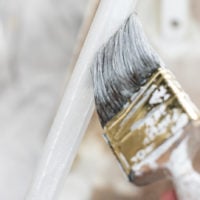 71 Comments on “What are you doing New Year’s Eve?”