We almost broke into the 60’s in Minnesota last weekend, so I had gardening on the brain.  We’re still waiting for all of the snow to melt and the ground to thaw, but the warmth and sunshine gave me the itch to get my hands dirty.  It’s going to be a while before I can start on the yard, so I decided to repot some of my houseplants that needed more elbow (root) room and give everything a haircut.

First up were the rosemary plants that have been flanking my kitchen sink for a few months.  I’ve never had much luck keeping rosemary alive for very long, but plants love all of the rooms on the back side of our house, which faces south.  We get beautiful light all day long, so they can grow and stay healthy. 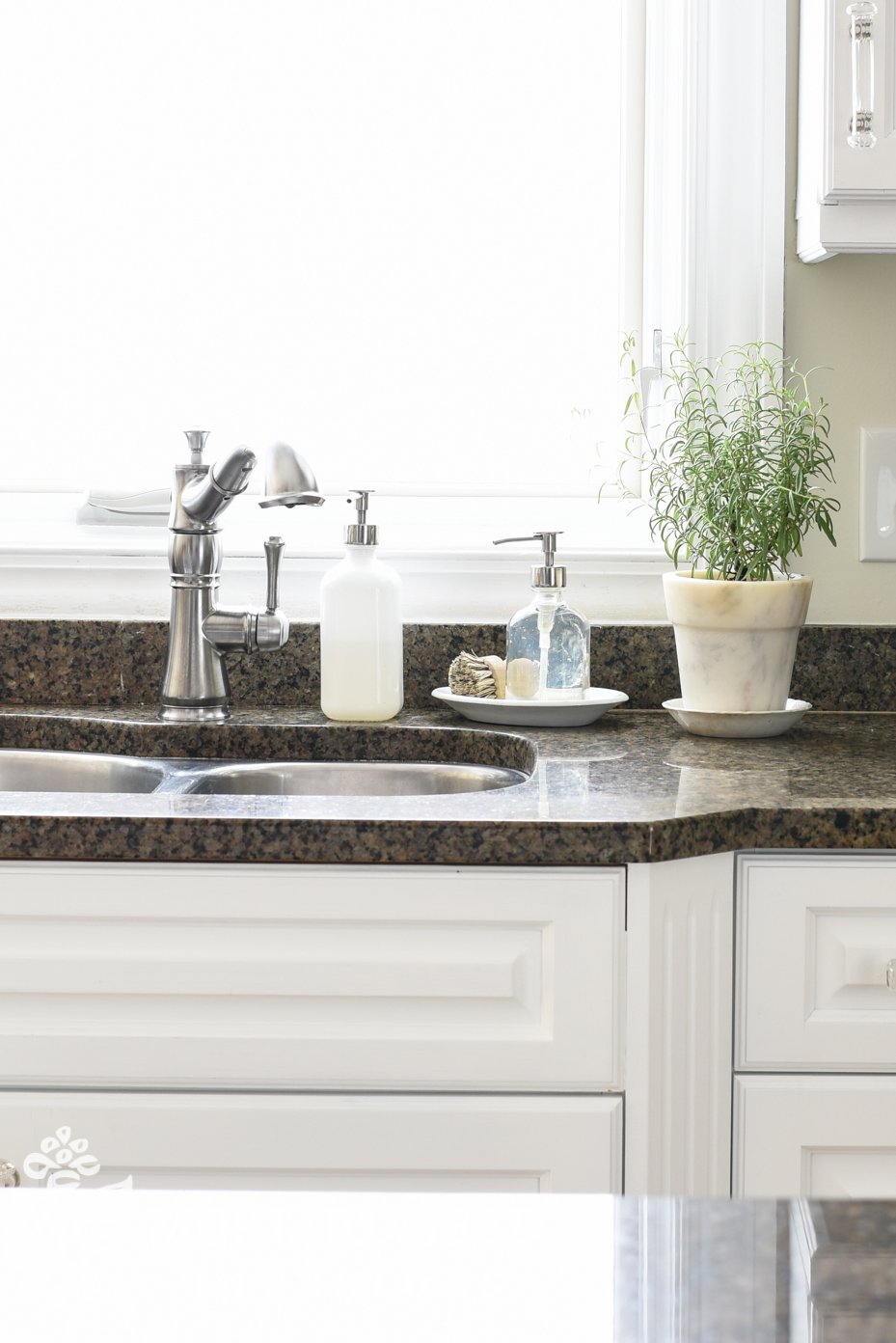 They were both looking like they needed more soil and I have been wanting to trim them back to train them into a topiary shape, so I moved them to a bigger pot, added more soil, and started to strategically trim. 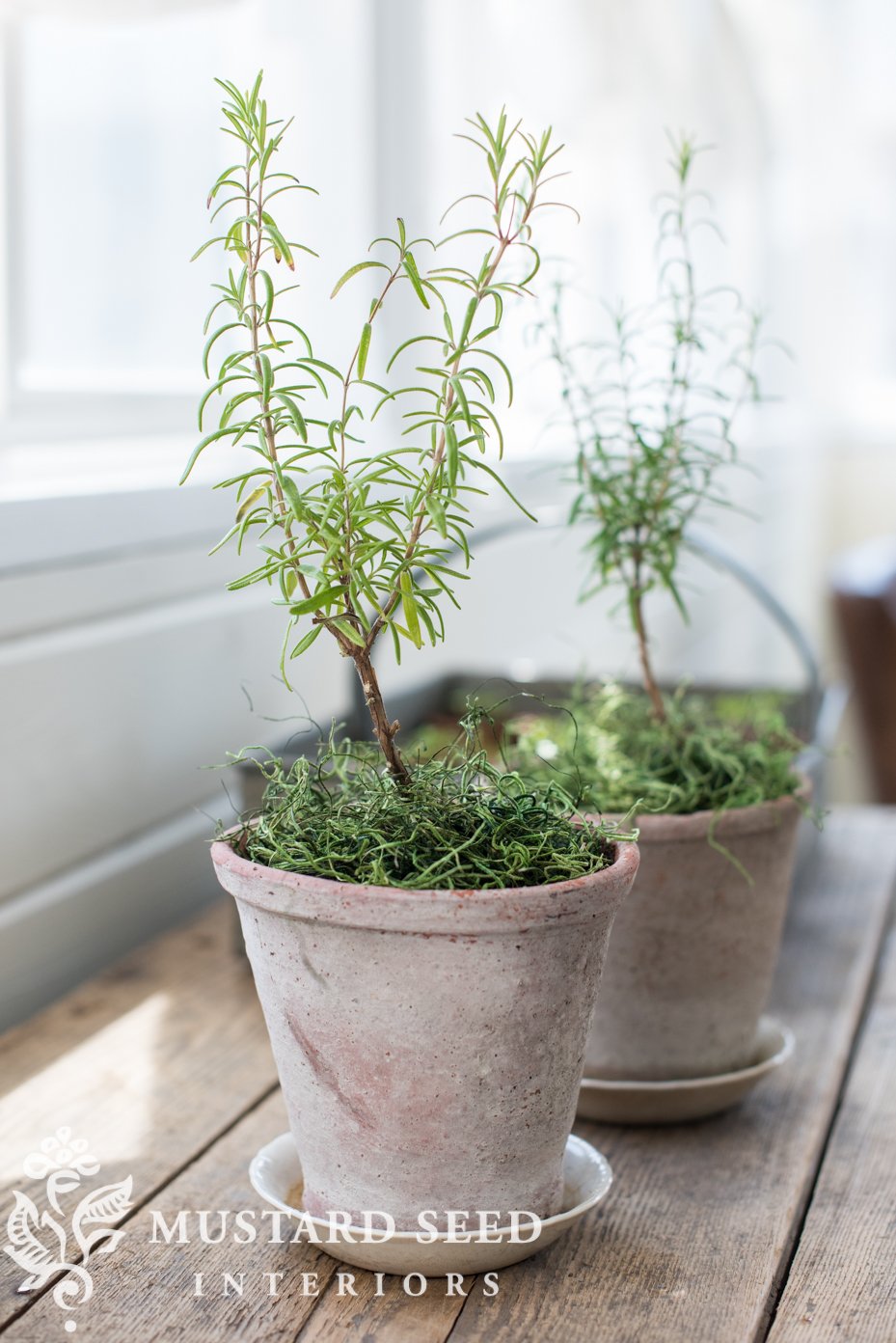 I added some moss to top off the soil as well, which helps them not look so naked!  I’ve read that it can take years to train rosemary into a nice topiary shape, but I’m not planning on these being very tall.  It’s still going to take a while, though, so I’ll keep you posted. 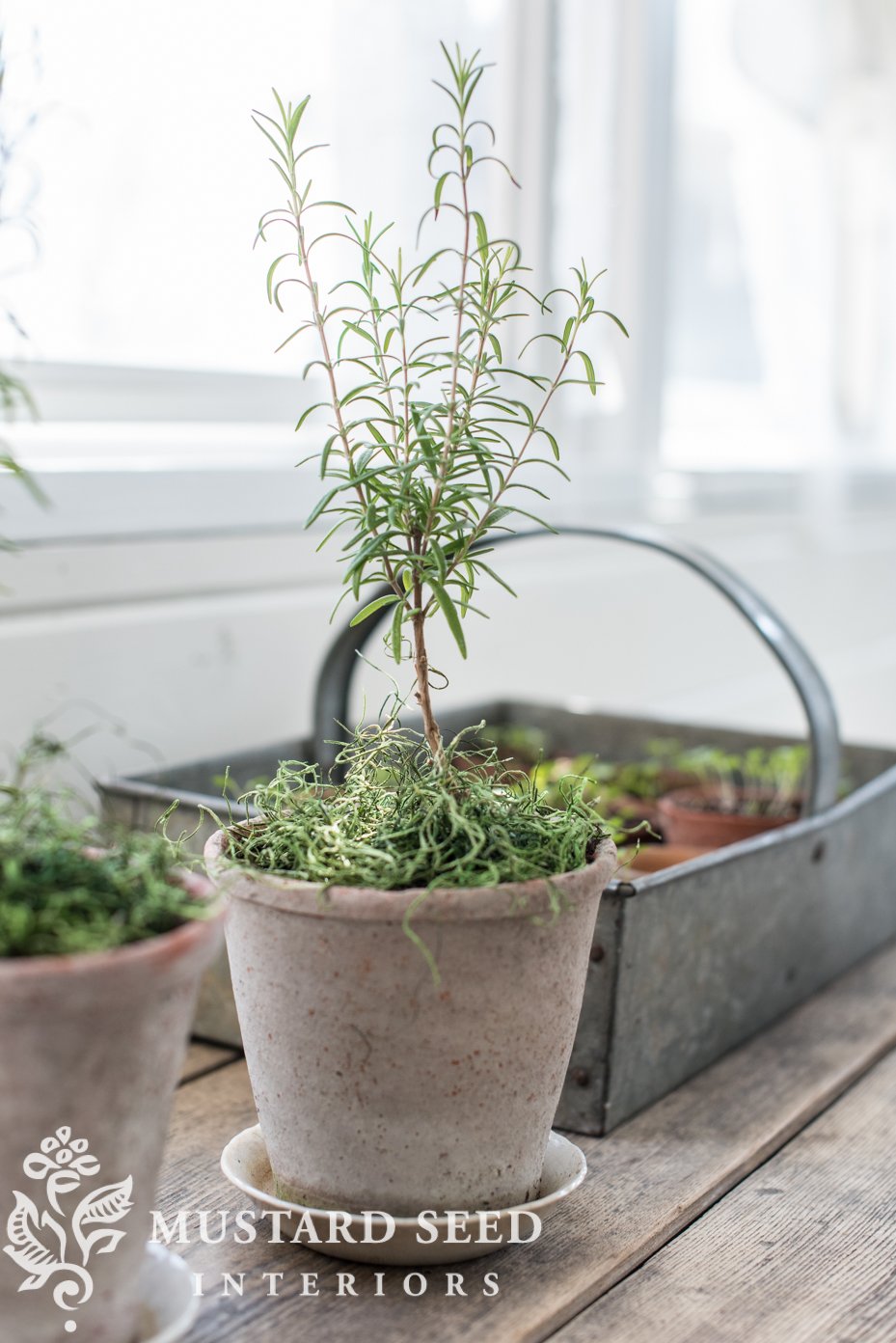 I also trimmed back the two creeping plants I have the in the kitchen and eating area.  They love it in this light as well.  The one on the scale was about to engulf the scale and it even started creeping onto the island, so I cut it back. 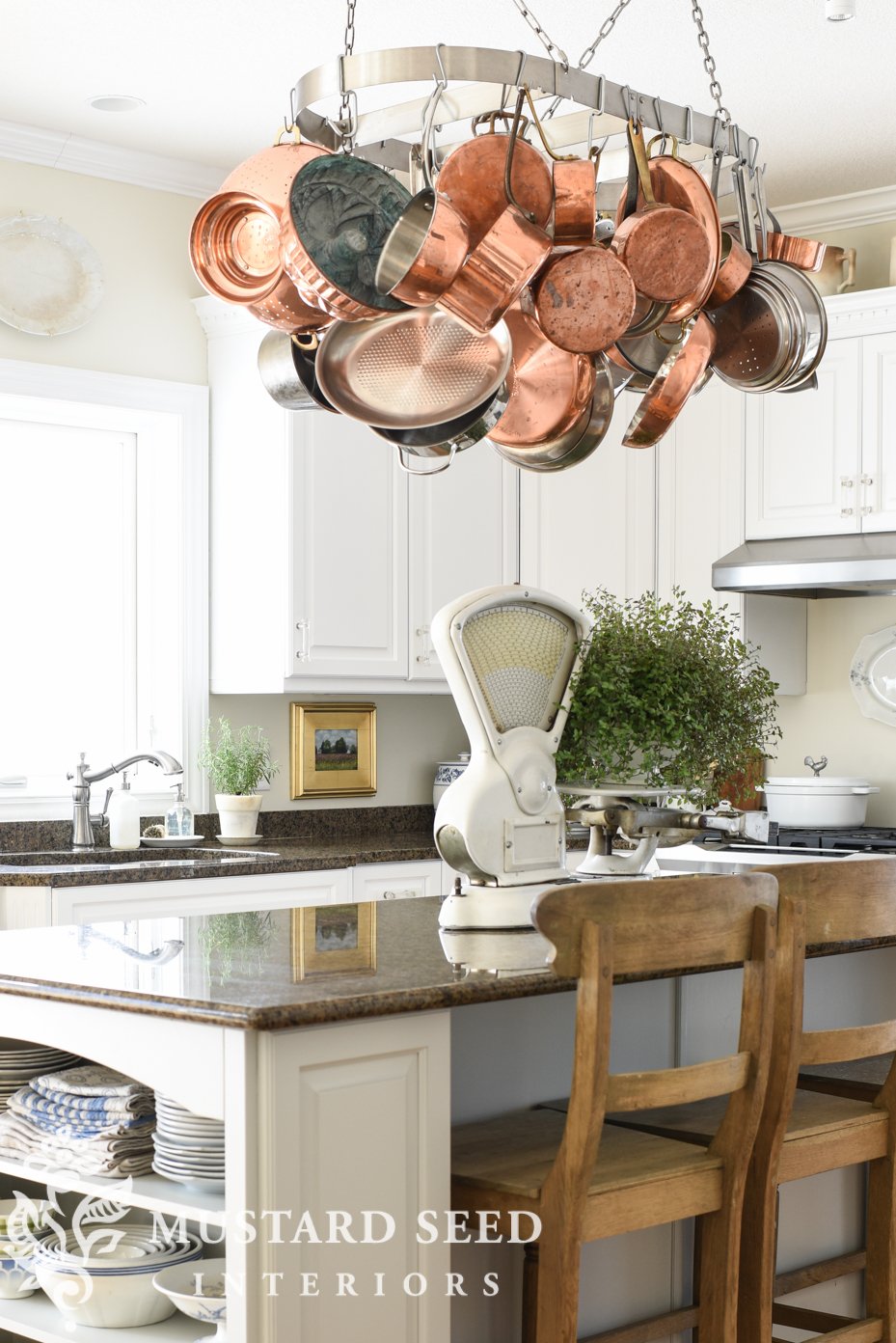 I cut the other one back as well and moved it to a crock in front of the back stairs.  I haven’t had greenery there since Christmas and I was missing it.  It will be a little further from the window, so hopefully it’ll still thrive. 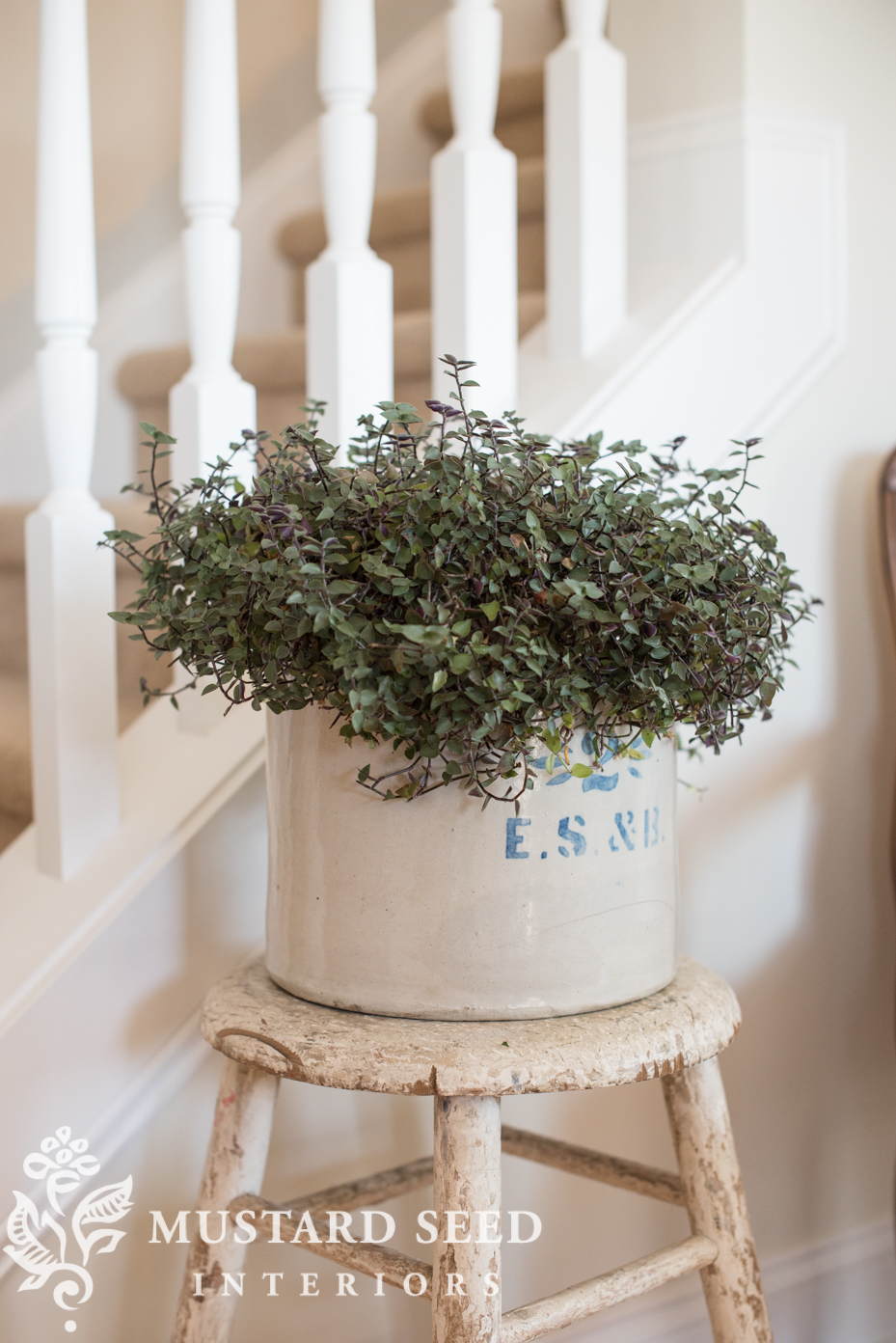 For those interested, the plant is called a “wandering jew”.  I found it in the houseplant section at Home Depot.  I looked it up online and the specific variety is the Dwarf Bolivian Wandering Jew plant.  How in the world did it get that name?!  Anyway, that’s what it is!

And, in other plant news, I loaned some small pots to our church for a women’s garden-themed dinner, so I ended up with some arugula sprouts in them when they were returned!  I am keeping them in the studio for now and will see what I can make of them.  We do have a garden bed, but it’s horribly overgrown and we don’t have any protection against deer.  I am hoping to get a flower garden and small vegetable/herb garden going this summer, though, so this is a nice start. 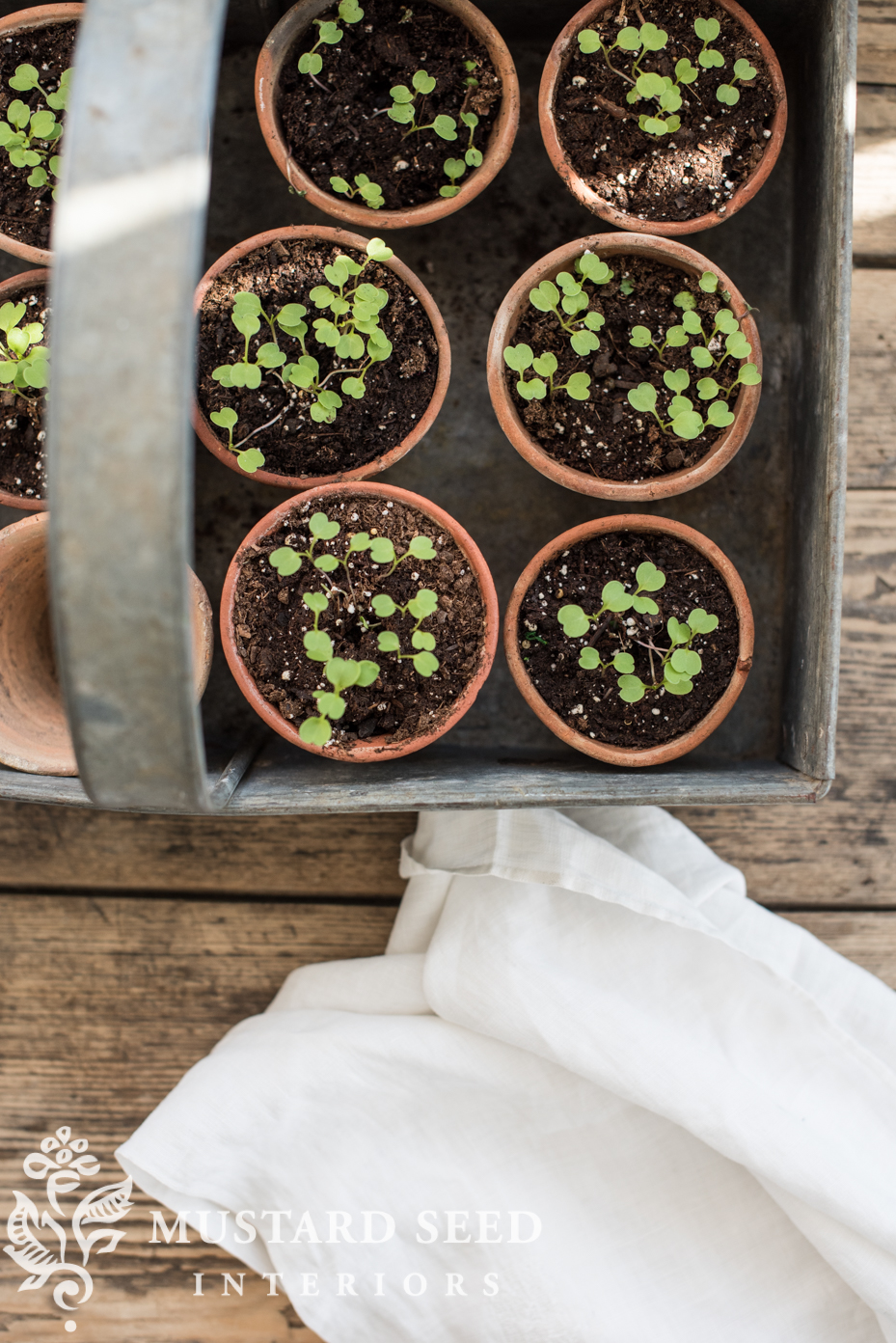 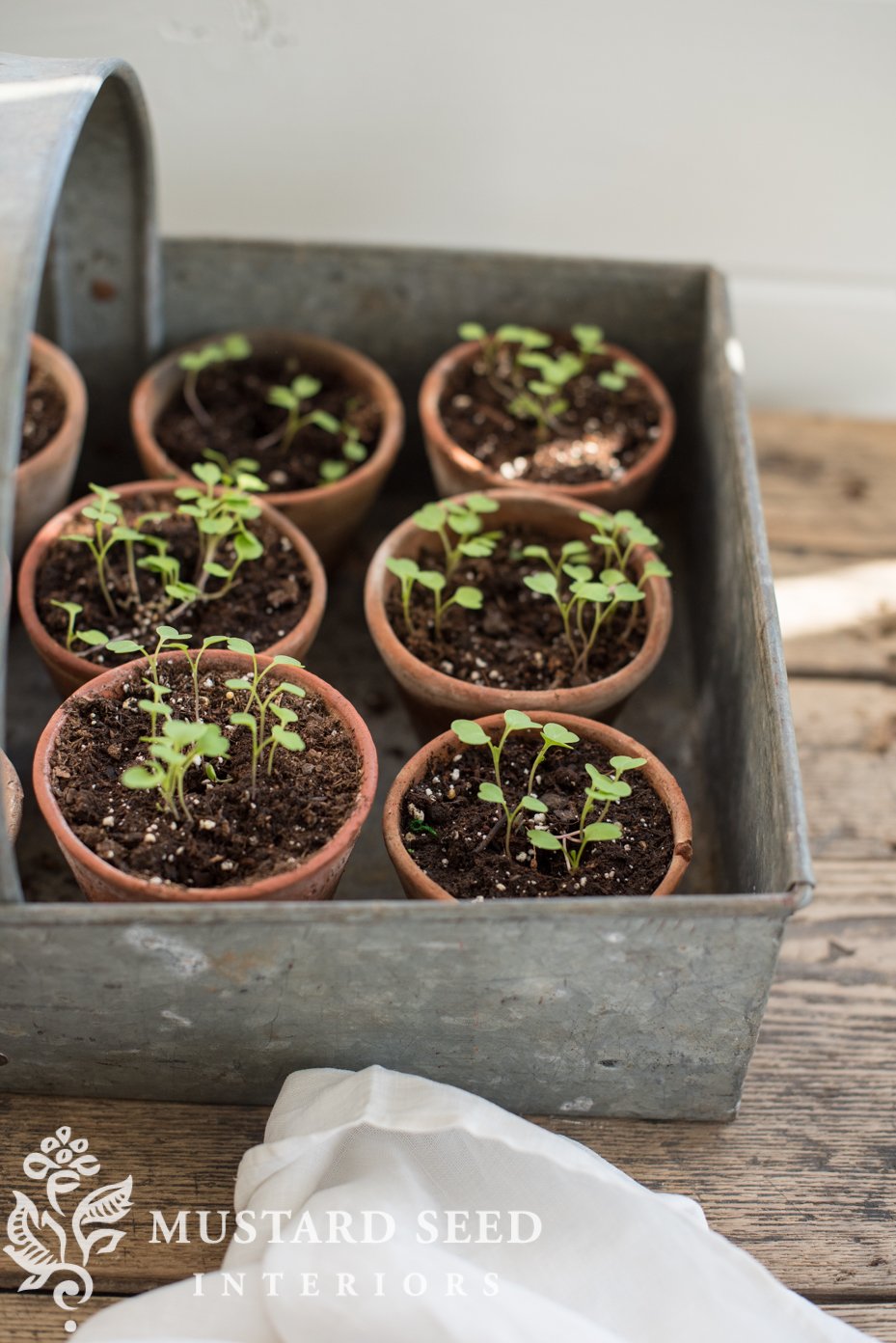 And, I’m starting to formulate a plan for the landscaping in the front.  I know yard work is hard and there is too much to tackle this year (along with everything we want to tackle inside the house), so we’re going to focus on the front and the vegetable/herb/flower garden mostly this year.  I would like to get a hydrangea hedge going as well, but the rest will have to wait until next year.  One step at a time.

This will be our first spring and full summer in this house, though, and I’m looking forward to seeing what pops up and also what grows.  We have a couple of cherry trees and an apple tree that I’m excited about.  I don’t know if the cherries are ornamental or edible, though.  I’ll have to do some research, so I don’t make any poison pies!

I’m a novice gardener, so I still have a massive amount to learn, but the best way to learn is to start digging…