As I’ve shared before, my favorite thing to do at the beach is to hunt for shells.  I’ve been shelling since I was a little girl, helping my Oma hunt for olive shells at Long Beach, NC.  When we cleaned out her attic, we found several five-gallon buckets filled to the brim with shells she had collected.  She definitely passed that along to me and combing a beach is the first thing I’ll do when my feet hit the sand.  As I was sharing about shelling in my Instagram stories, I was asked if I’d share some tips on shelling, so here they are… 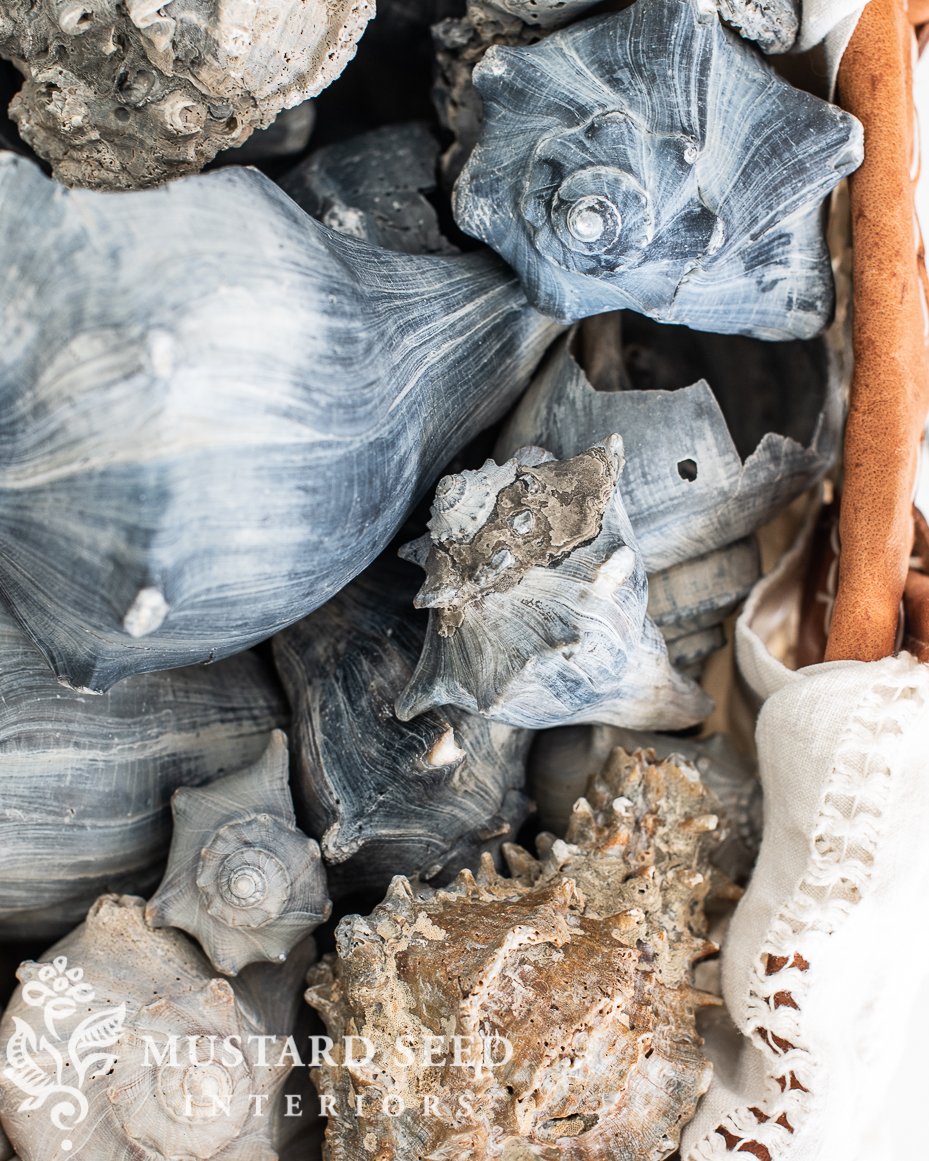 The first step to shelling is to make sure it’s okay to pick up and keep shells from that beach.  When I shared the shells I found on Instagram, I received some questions about that as well as a couple of snarky comments.  If shelling isn’t permitted on that particular beach, which is often the case in protected areas, state/national parks, etc., then definitely don’t do it.  If your conscience is violated by beachcombing, then don’t do it.  But, on your run-of-the-mill beach in the US, it’s permitted and perfectly fine to collect deposited shells, coral, fossils, sharks’ teeth, driftwood, sea glass, etc.  Just make sure the shells are no longer occupied (or living in the case of sand dollars & starfish.) 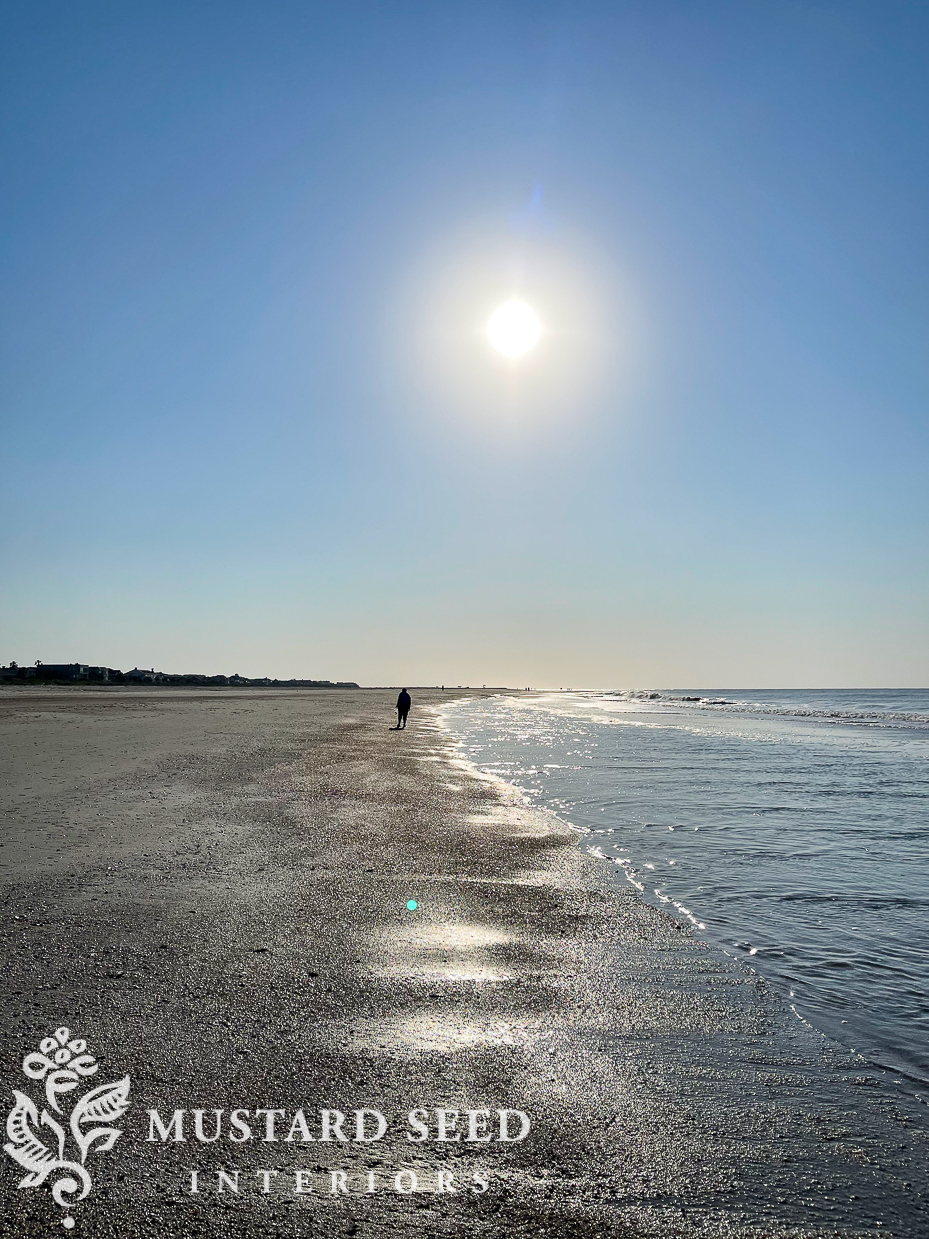 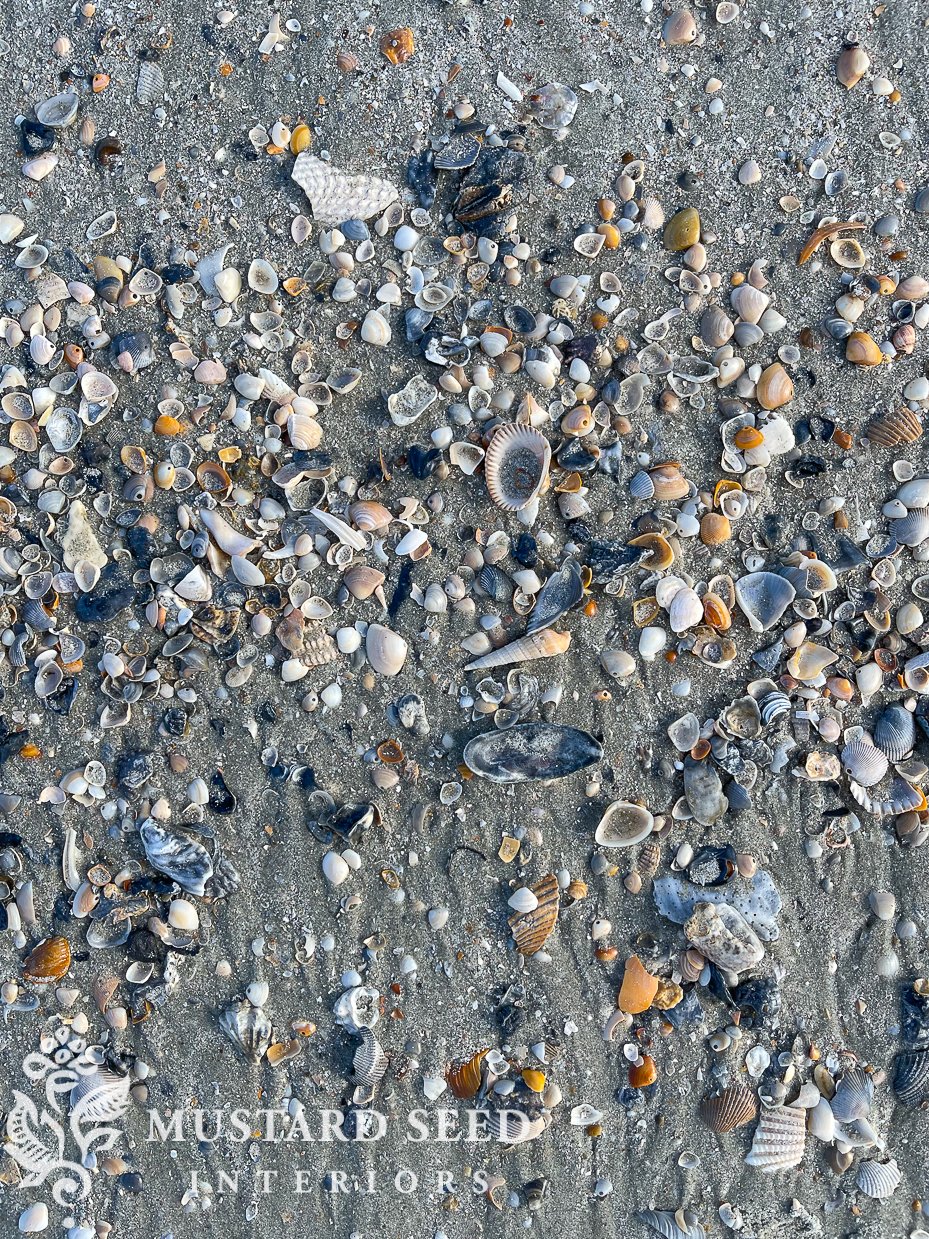 I sort of like to just go out and see what I can find, but if you’re not sure what you’re looking for, it’s nice to do a quick Google search to see what tends to wash up on shore in that location.  It’ll help you hone in on the shapes and colors of specific shells, but it will also set some reasonable expectations.  In the case of Isle of Palms, shells that are commonly found there are olive shells (the South Carolina state shell), whelks, lady’s ears, sand dollars, oyster shells, snail shells, and sharks’ teeth.  (I made a concerted effort to find sharks’ teeth, but didn’t find any on this trip.)  My mom found a few starfish when she went a couple of years ago.  Remember that shells can be seasonal, though, and dependant on weather, tides, and even what kind of dredging, etc. happens offshore. 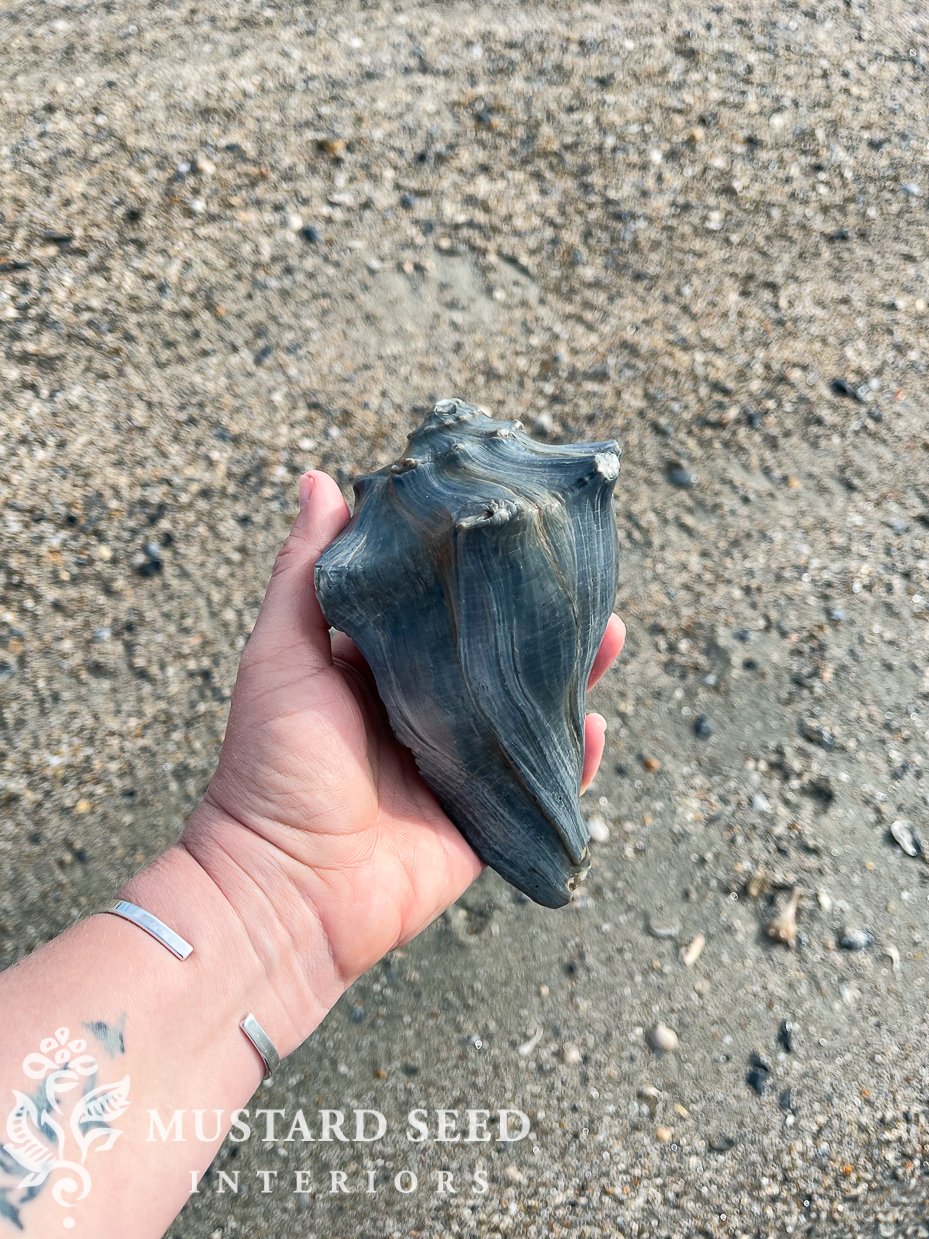 tips for shelling | time around the tides

Low tide, or in the window about two hours before and after low tide, is the best time to look for shells.  That doesn’t mean you can’t find shells at other times, but more of the beach is exposed at low tide and there will be a lot more deposits of shells to pick through.  There were times when my mom and I went out at the right time and still didn’t find very much.  There were other times when we found more than we could fit in our bags and we started putting shells back!  Some mornings, we found a lot of whelks, and other times we found tons of olive shells.  It can be very hit or miss, so going out to look daily will increase your chances of finding good shells. 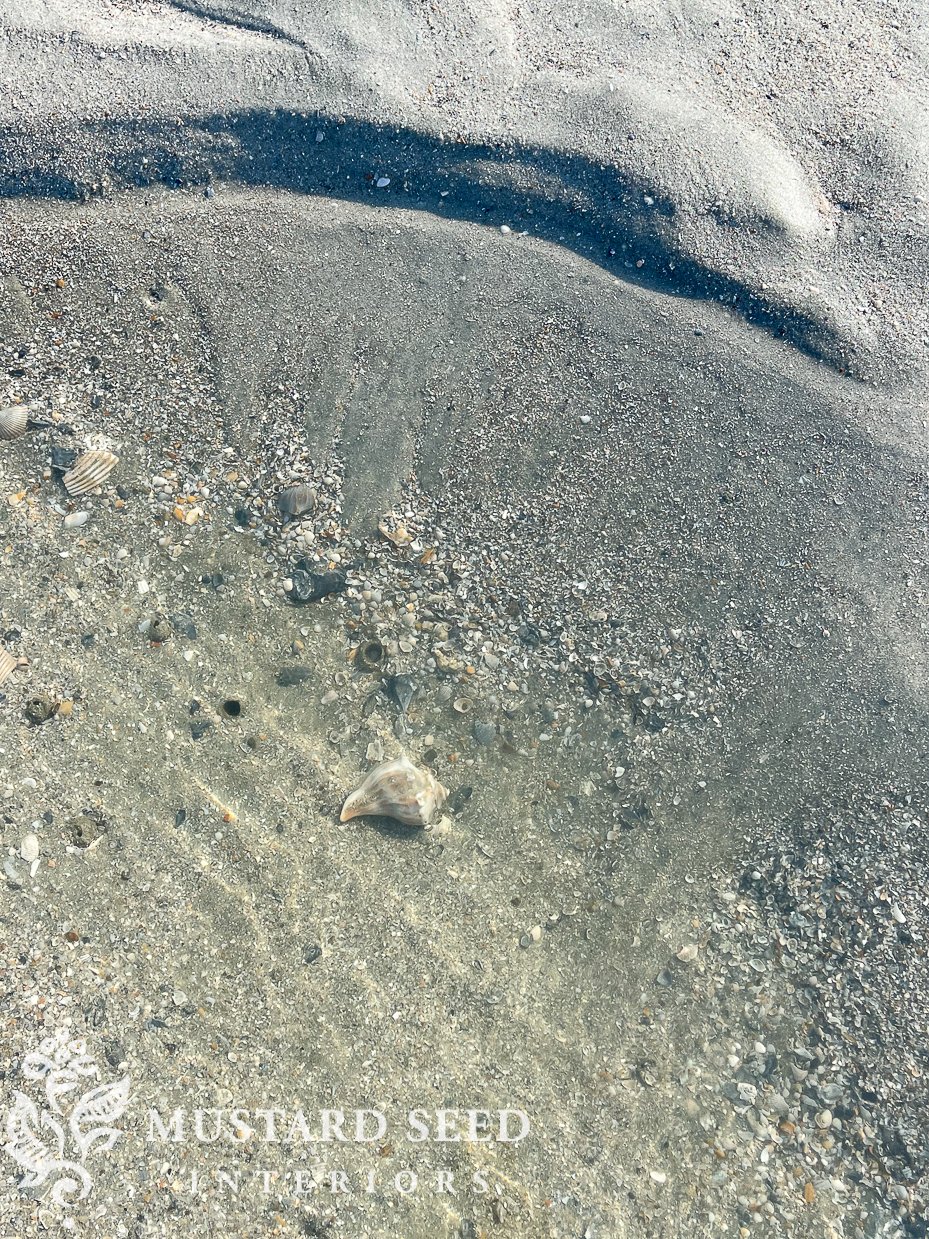 tips for shelling | know where to look

We learned pretty quickly that the pools formed on the beach during low tide were great places to find shells like whelks and larger olive shells.  They would get trapped in the pools and sink to the bottom.  I usually went barefoot, so I would wade through the pools and get the shells in the deeper areas.  Beyond that, there would be times when there were hardly any shells in front of our chairs, but if we walked 1/4 mile in one direction, there would be large areas of shell deposits to pick through.  We discovered that we would find more shells if we walked to the left of our chairs than the right for some unknown reason. 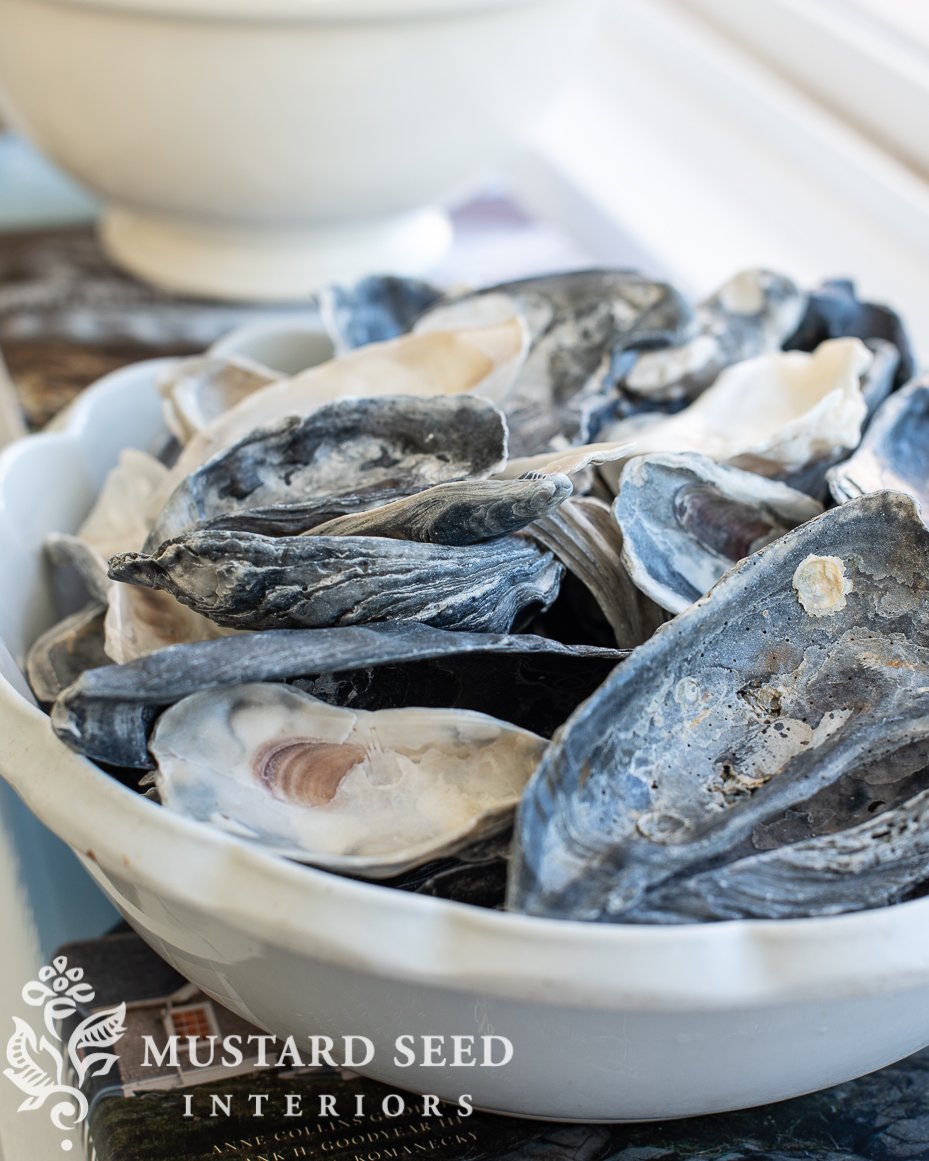 tips for shelling | collect what speaks to you

While there are specific shells that are prizes for me, I try to keep an open mind and will often collect “common” shells that I find beautiful.  After walking over oyster shells for a couple of days, I started collecting ones that were interesting, pretty colors, unique shapes, or ones that were worn completely flat and smooth by the surf.  I also started collecting white oyster shells when I noticed they were less common than the blue/gray ones.  It’s fun to find big, showy shells, but sometimes the run-of-the-mill shells can be fun to collect, too.

I sort of loved some of the ones that were broken and crusted or filled with holes.  The boys quipped that they knew I would like them because they “looked really old!” 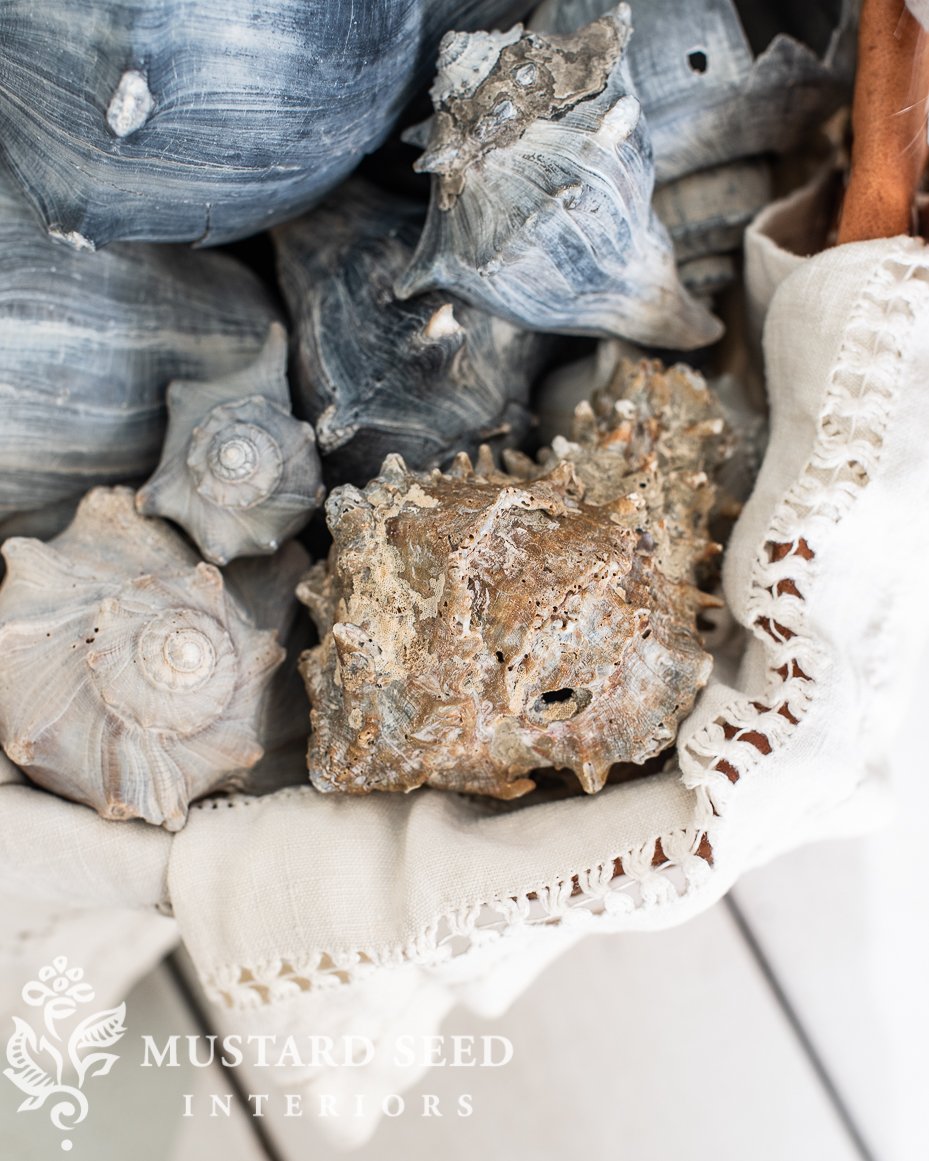 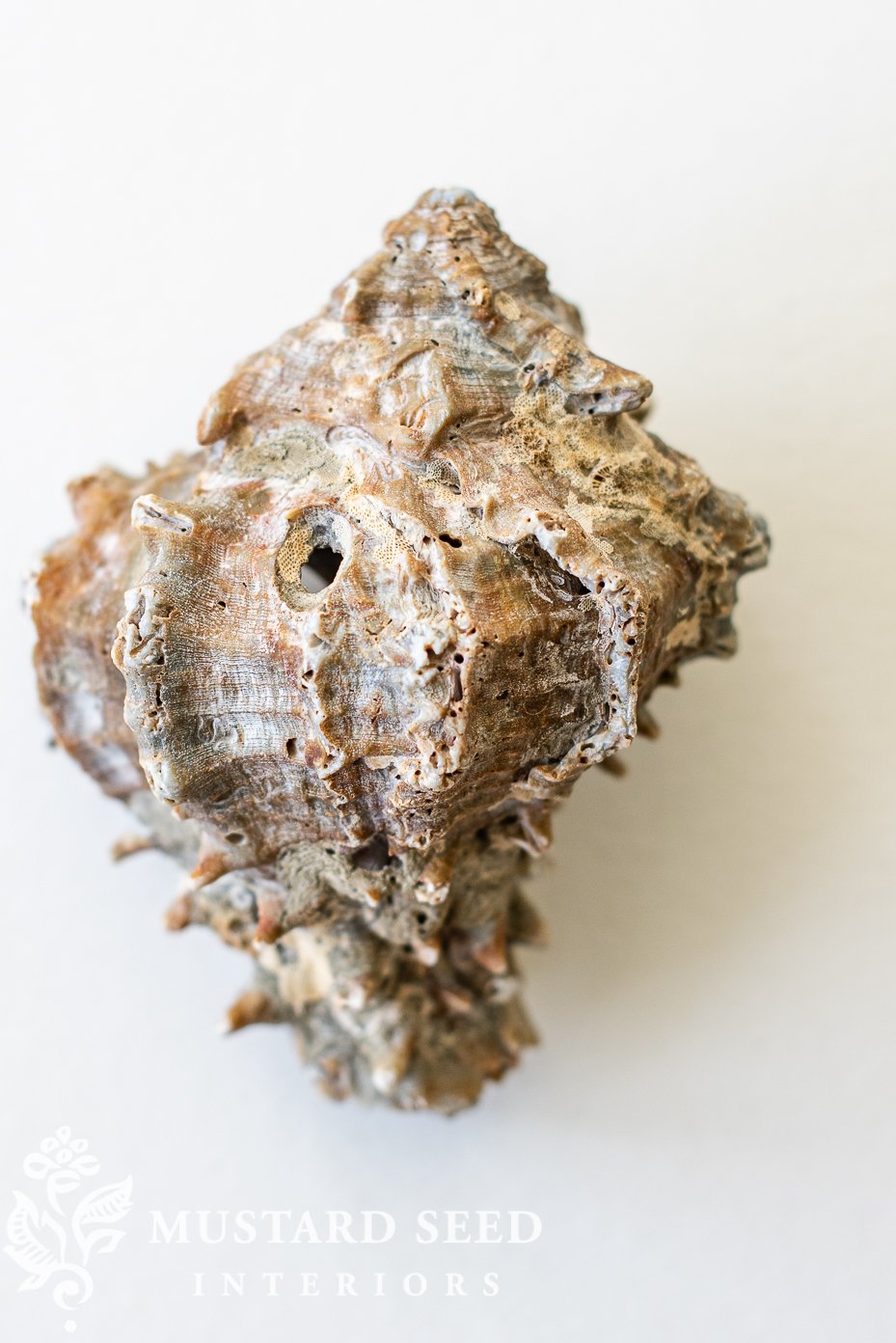 It’s a fun activity to get kids involved in, too.  Marshall loved any excuse to go in the surf, so he was great at finding large whelks rolling around in the waves.  Calvin had a great eye for spotting unique shells and was so proud when he found this perfect sand dollar.  It’s also fun to see what they are drawn to. 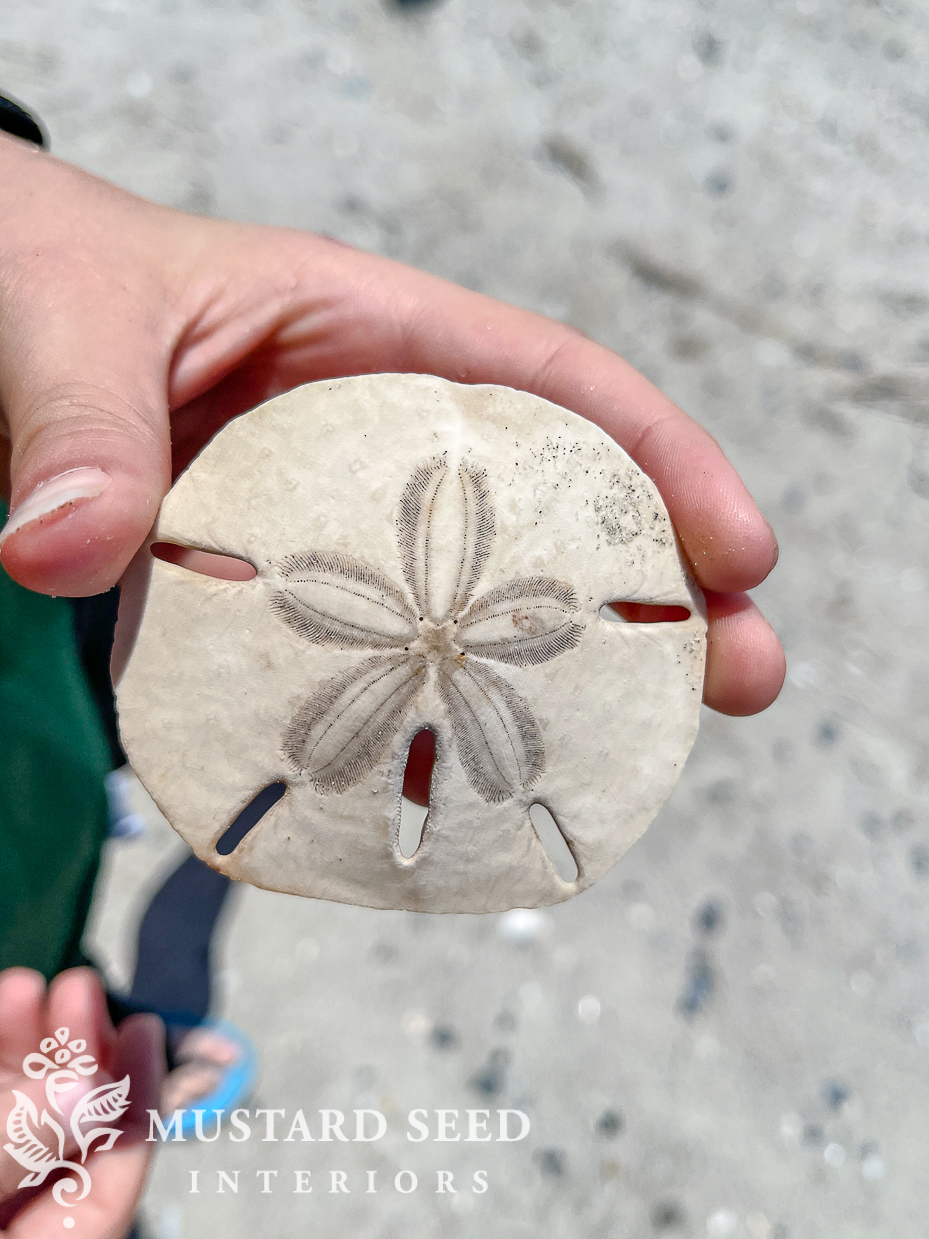 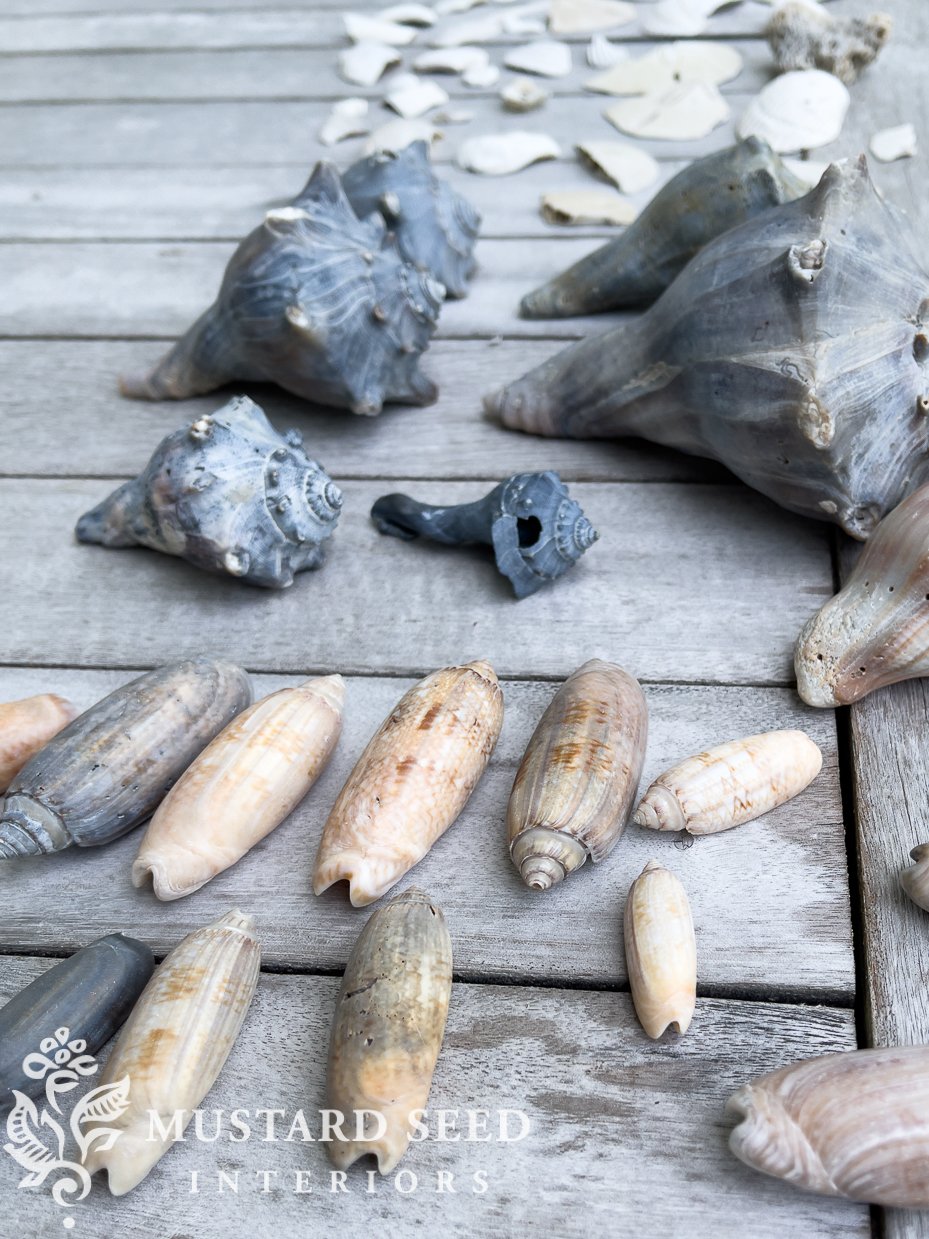 tips for shelling | washing the shells

I wash the shells as best as I can in the surf (or tide pools) before I put them in the bag.  For spiral shells, I’ll dip them in the water and then turn them twice against their spiral.  I’ll get some out on the first turn, but the bulk of sand and shell pieces come out on the second turn.  I’ll repeat the process a couple of times until the water comes out clear.  For the rest of the shells, I’ll just rinse off and agitate a little bit with my fingers to get off the sand.  Once I get them home, I’ll rinse them in clean water and soak them in some gentle dish soap, then rinse again, and lay them out in the sun to dry.  If there are small shells stuck in the olive shells, I’ll gently pick them out with a butter knife.  If you follow those steps, you won’t have a stinky, briny bags of shells when you get home! 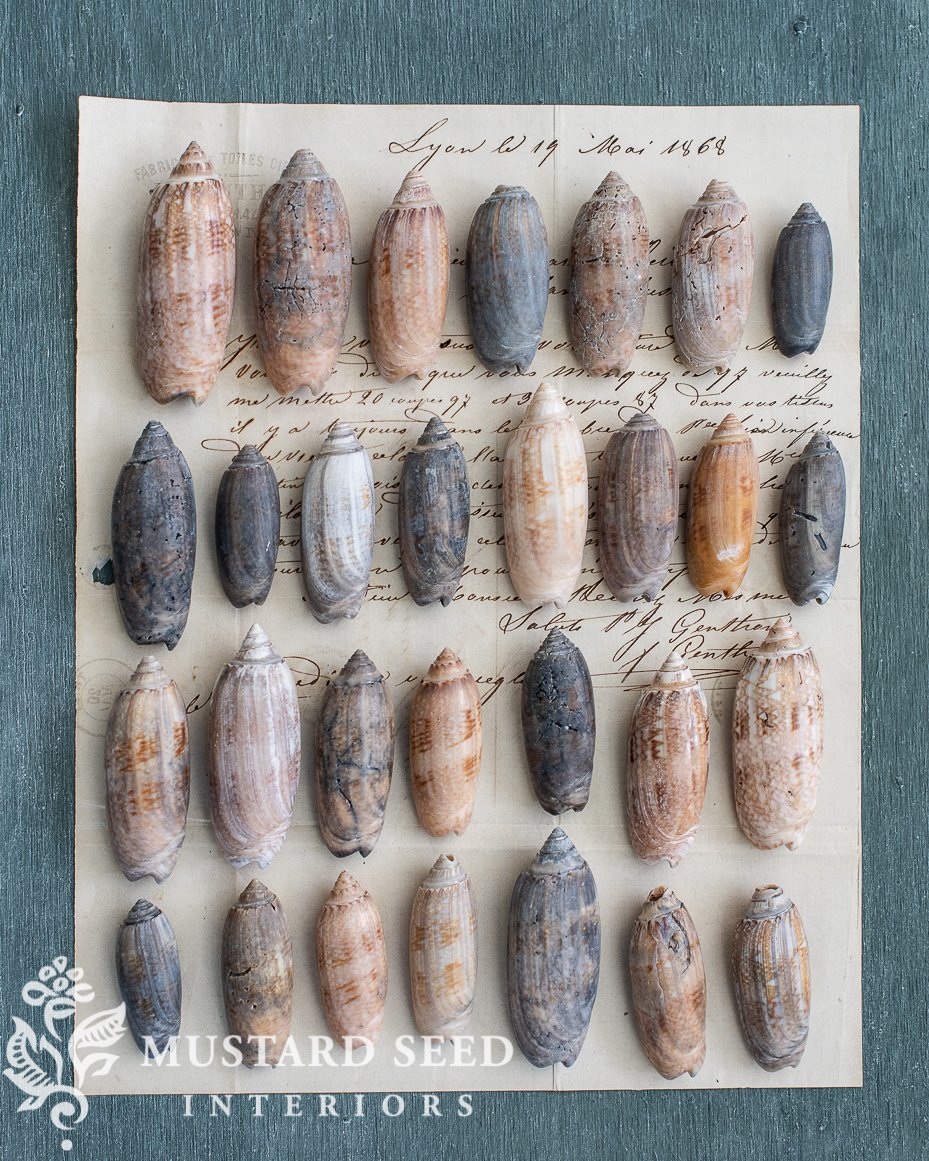 I can’t tell you how many times I’ve gotten home from the beach with a bag full of shells and no idea what to do with them!  I just enjoy collecting them and I figure I’ll sort them out when I get home.  In recent years, though, I try to have an idea for how I’ll use or display shells as I collect them.  Of course, they look beautiful in a bowl or glass jar, but there are so many other ways to display them.  Mount them in a shadow box (you can find a tutorial for that HERE), larger shells look great lining a window sill, put them in your garden beds, tuck them in a vignette on a shelf…  And they can be great for projects.  My Oma had a beautiful mirror with shells covering the frame and I remember making little animals out of collected shells when our family went to the beach.  We’d make turtles, mice, rabbits, and more by collecting shells that could be bodies, ears, feet and then gluing them together.  It was a fun project that created a memory that sticks with me today. 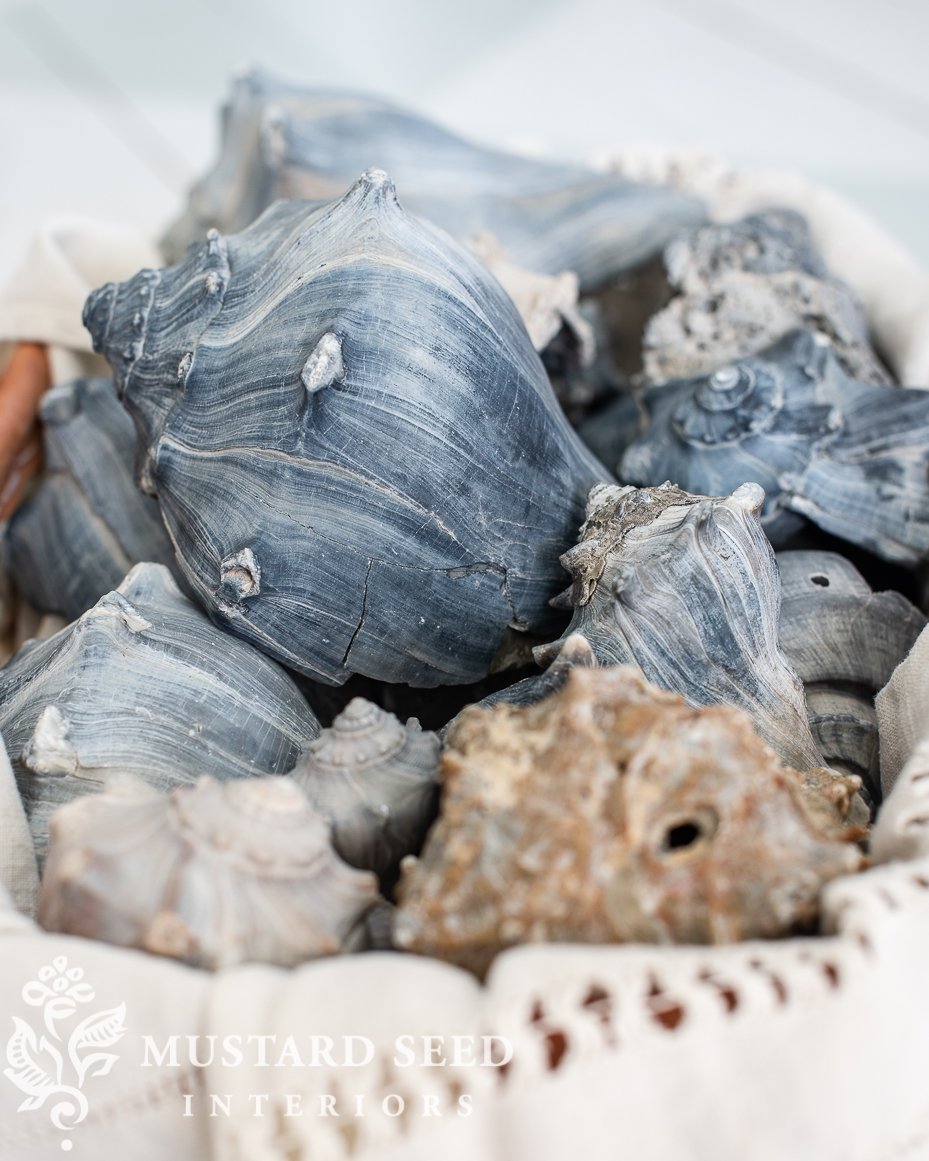 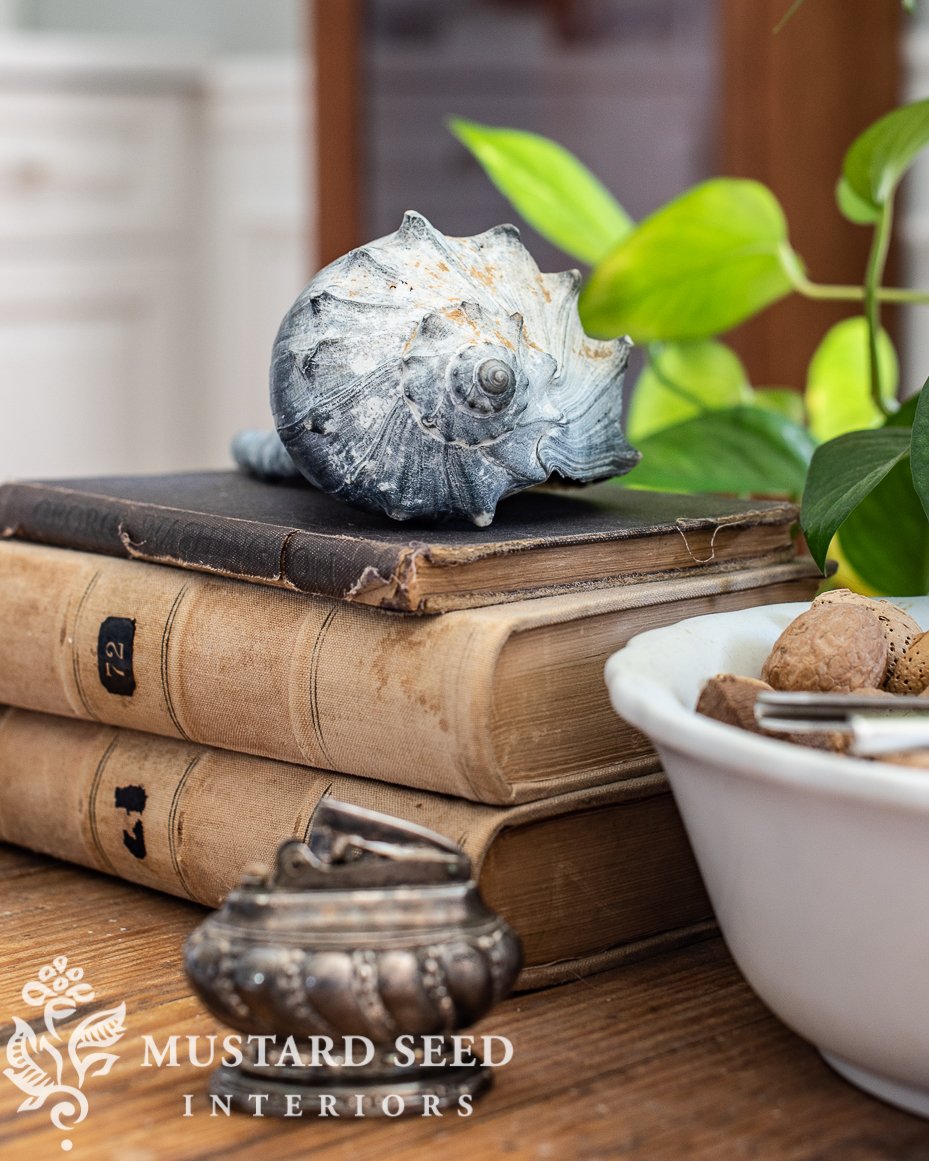 I also decided to collect white and blue/gray shells to use as pigments for paint.  As I was combing the beach one morning, I noticed a piece of shell that was bleached by the sun, so it was a bright white.  I picked it up and immediately thought of the scene from Tangled when Rapunzel asks mother Gothel to get white shells to make paint.  I added that white shell to my bag and then looked it up when we got back to the beach house to see if making paint from shells was actually a thing.  And, it is!  It was a common way to make paint in the middle ages.  Well, I have to give this a try, so I gathered bright white shell pieces as well as ones that were blue/gray.  I’ll share the process and what I learn from it in another post. 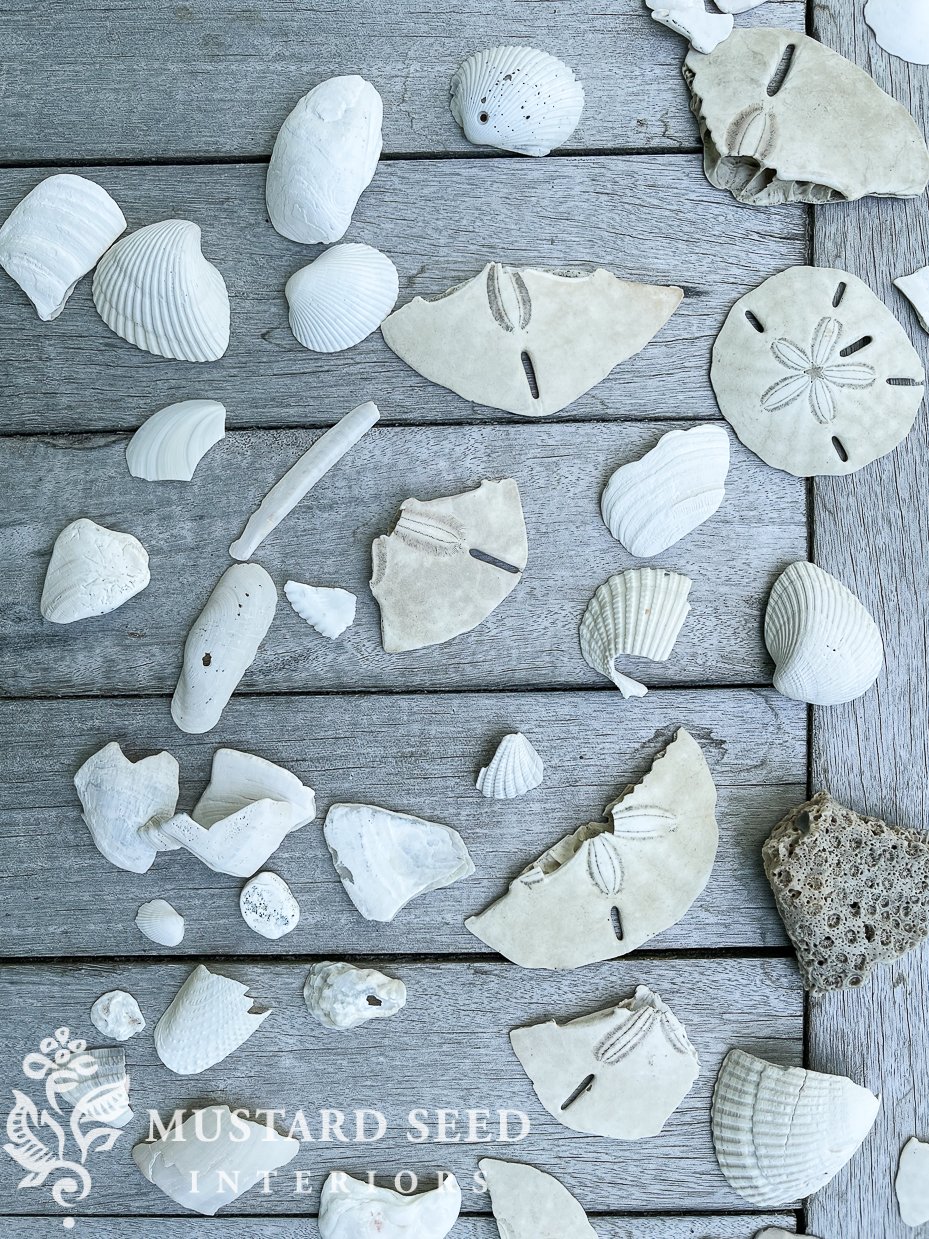 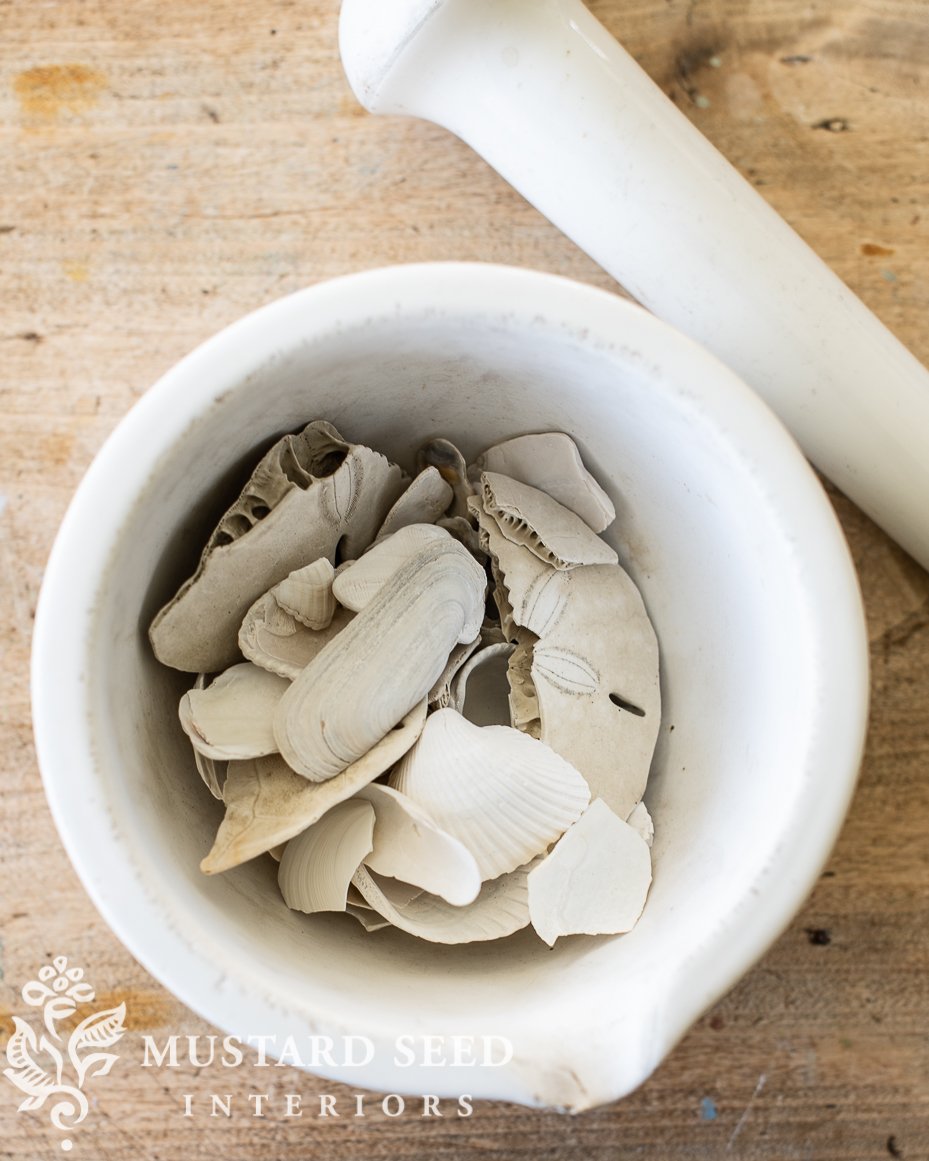 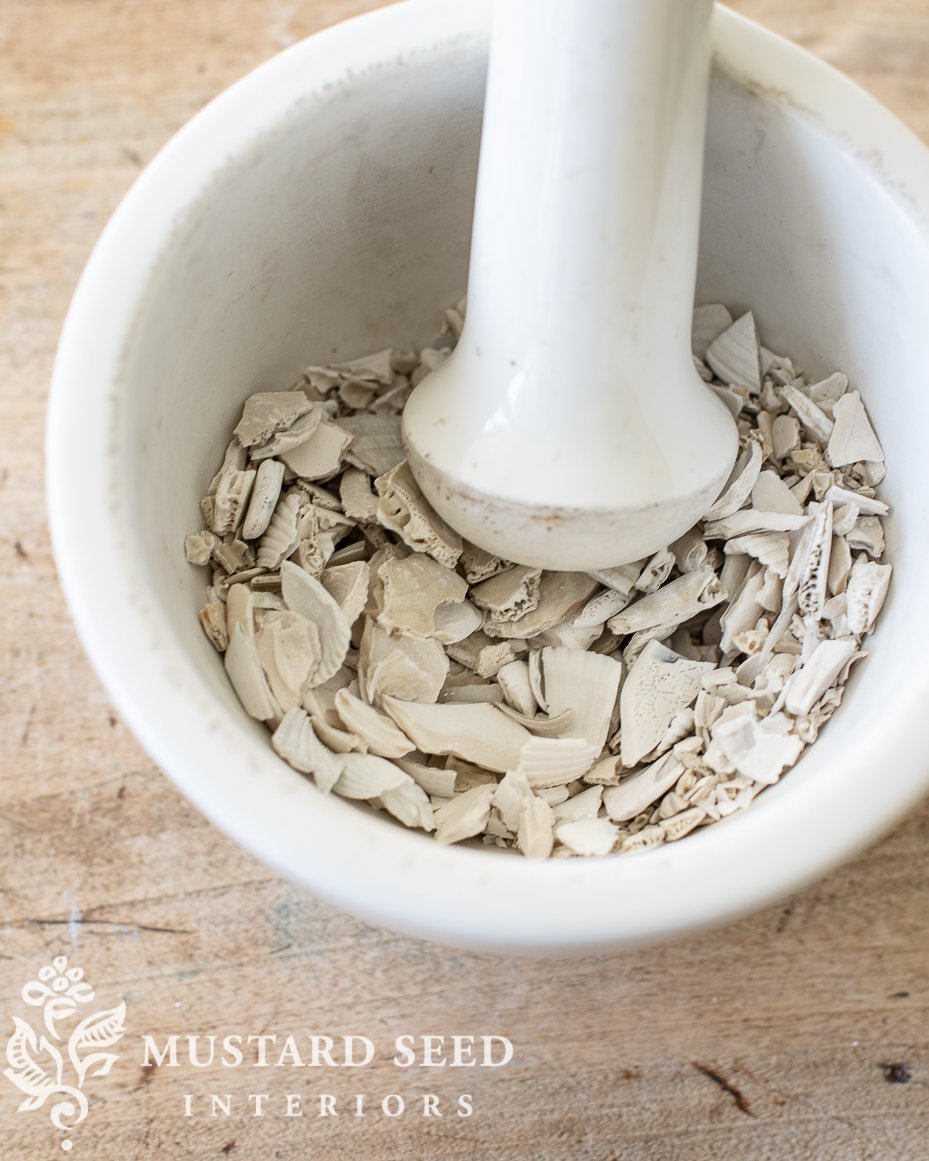 And, my other use for the shells is to use them as still life subjects.  I’ve already painted a few of the oyster shells and I’m looking forward to painting more as well as some of these whelks. 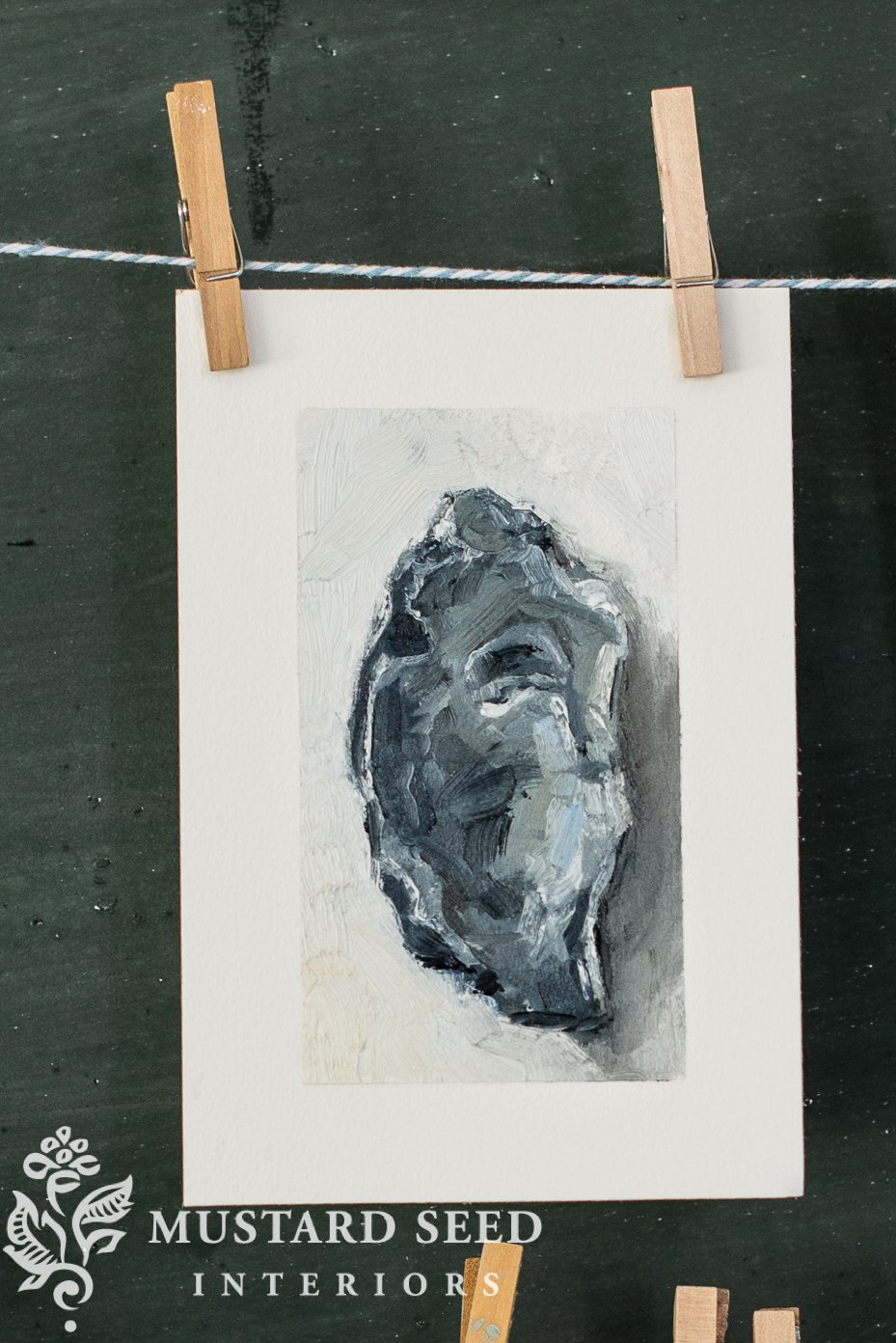 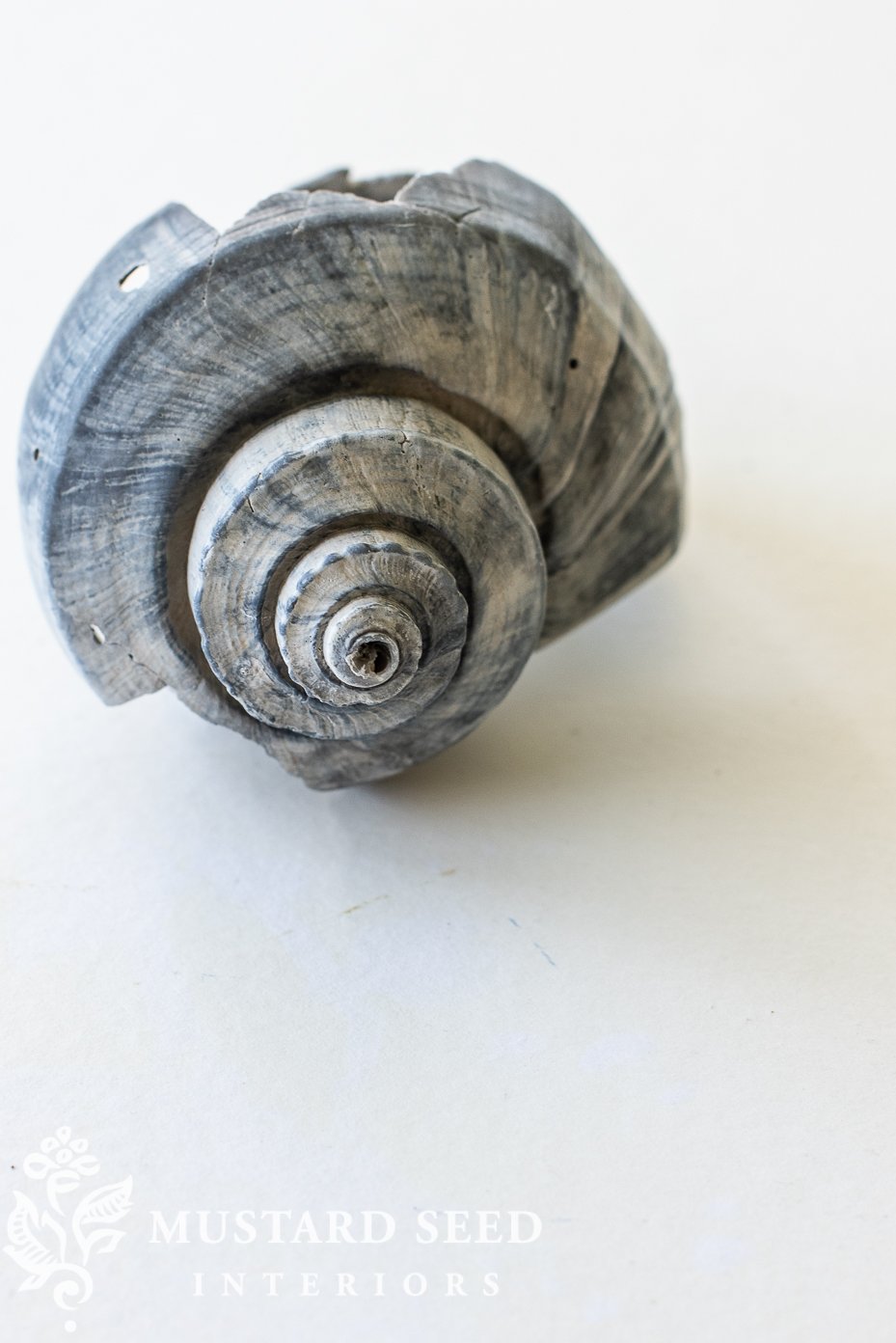 So, the next time you’re on the shore, I hope you’re inspired to do a little beachcombing!

Are there any tips that I missed?  Any fantastic beaches for beachcombing?  Any other questions?