Well, I am back home with Jeff and the boys.  I’m a little jet lagged and still a touch nauseous from the long flight and trying to eat when my stomach thinks it’s the middle of the night, but I’m still enjoying the high that comes from visiting beautiful places, experiencing new things, and making connections with people outside of my usual sphere.

There is still so much to share!  I have almost an entire journal filled with notes, observations, and details that I was afraid I would forget.  I also have over 2,000 photos to sift through and develop.  Of course, I won’t share them all with you or we’ll likely be ringing in the new year with the final pictures of my trip!  Instead of sharing a full narrative, I’m going to share the experiences that I deem entertaining or interesting, either to those who are taking a trip to these destinations in the future or who want to live vicariously through my account.

Today, I’m sharing about our patisserie tour.  Paris Perfect presented the idea to me, since I told them I was interested in a food-based experience and they also read on my blog that I love dark chocolate.  The tour was $100/person, which included a three hour walking tour and tastings at eight patisseries!  (For the sake of disclosure, some of my experiences were complementary of Paris Perfect, but my mom and I paid for this tour, so this isn’t a sponsored post.)

We met our guide, Philippe, at a street corner in front of a cafe.  We had a printout from Paris Perfect with specific directions, so it was clear where we needed to be, at what time, and how to find our guide.  (As a side note, we used the Citymapper app to get around and it was fantastic!)

My mom and I weren’t sure what to expect from the patisserie tour, but we quickly learned there was a progression that would guide us through a variety of sweet offerings, telling us why they were traditional or award winning or a French favorite.  It was a bit of a lesson in history and culture as well as a pre-dinner dessert circuit.

We started with a Tarte Tropézienne, which is a custard brioche tart created in Saint-Tropez. 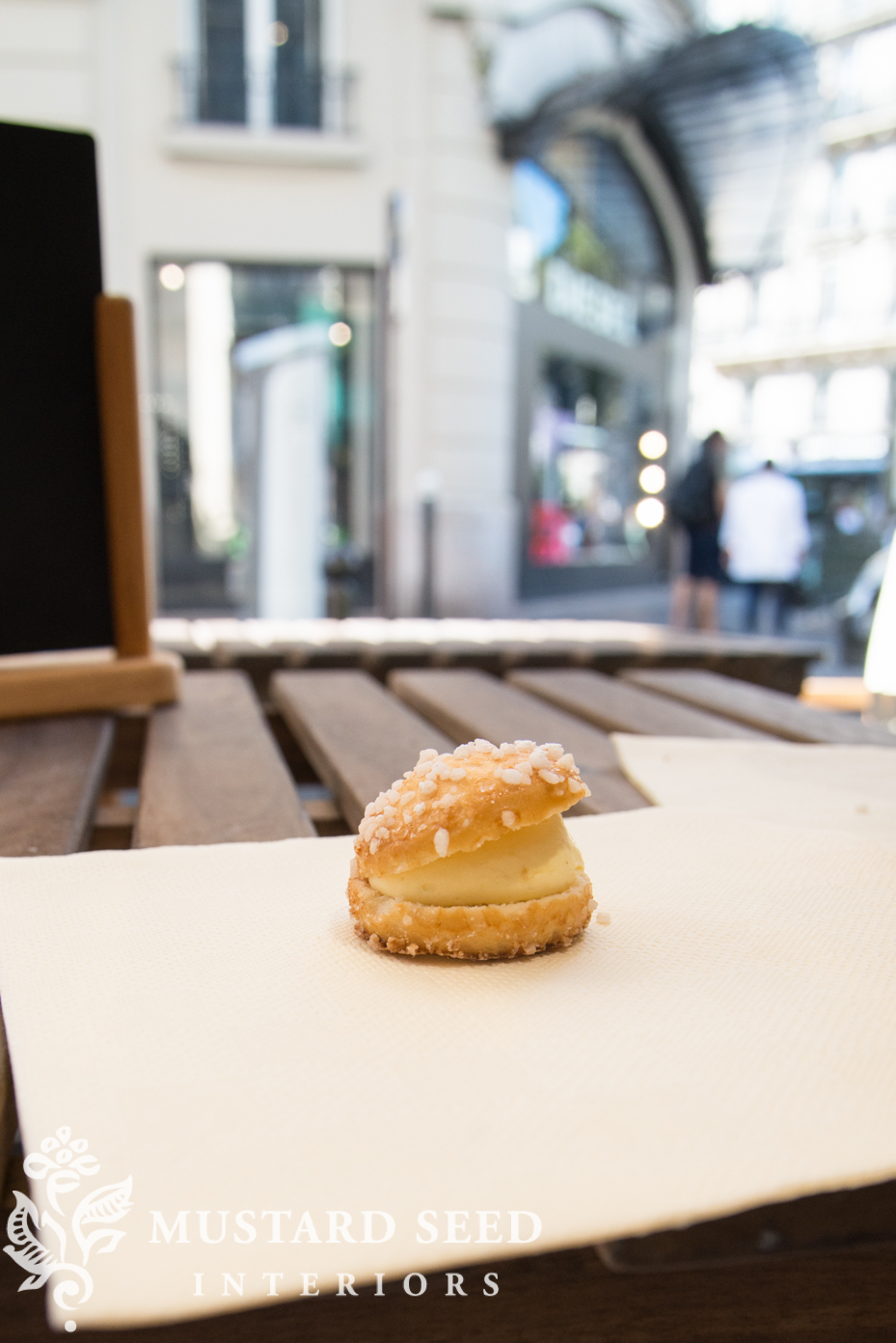 It was soft and sweet and reminded me of an airy yellow cake and butter cream that’s not too sugary.

A short stroll away, we ducked into a patisserie with a cheery pink and white striped awning and a window filled with dangling artificial flowers and towers clad in macarons (a preview of our next tasting.) 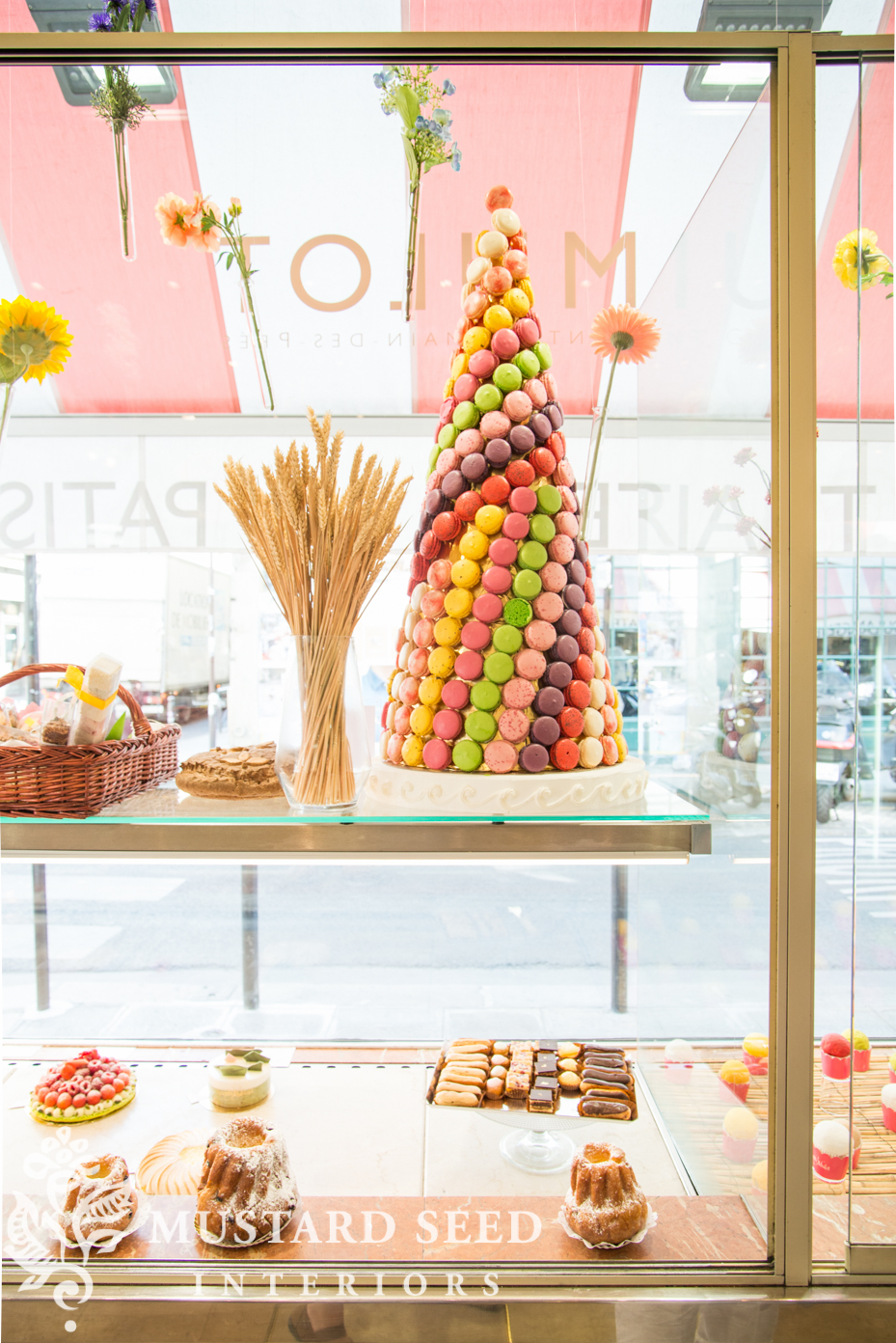 I selected a lemon macaron and my mom picked chocolate.  Interestingly enough, I never thought I liked macarons.  I also thought they were all the same flavor, despite being different colors.  Well, I misjudged macarons!  (I think I was confusing macarons with macaroons.)  The lemon macaron was delightful.  It was zesty and sweet with a little bit of a chew in the cookies and a soft interior.  I wish I bought a box to take home!

The third stop was at Pierre Marcolini’s patisserie, which at first glance looked like a jewelry shop. 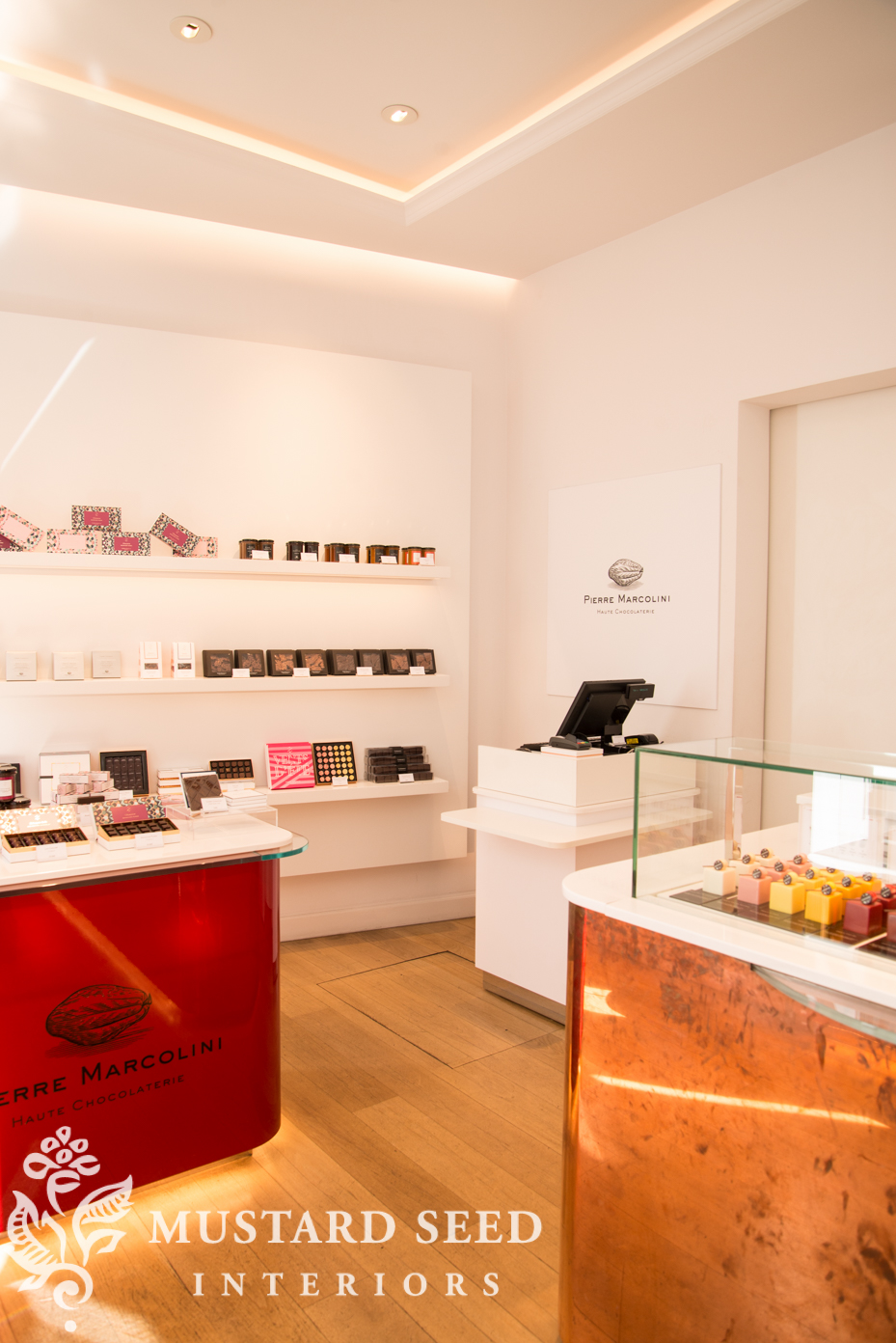 The colorful square cakes were works of art and captured my attention, but we were there to taste a traditional dark chocolate.  The chocolates were displayed by their country of origin and our guide selected Madagascar chocolate for us, because he said it was the best.  We both savored our small squares and the richness of the chocolate made it seem darker than 72%, but it was still creamy and wasn’t bitter.  It was, quite possibly, some of the best chocolate I have ever had. 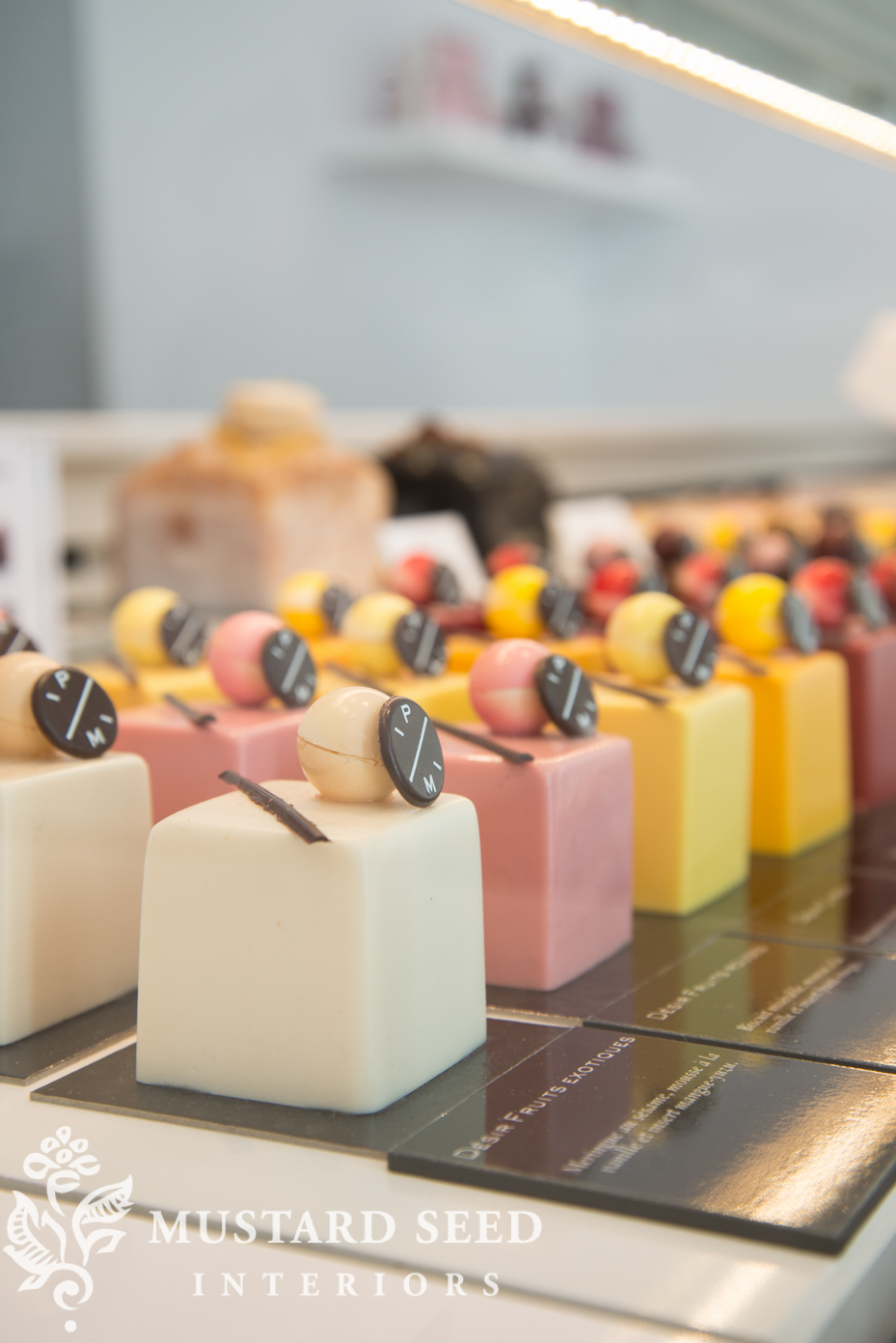 Right after the chocolate, we stopped for caramels that were available in just about every flavor you can imagine.  Who knew there were piña colada caramels?  I tried the traditional (and local favorite) salted butter and my mom tried pineapple.  I forgot to get a picture of this shop, but I loved that you could pop in and just buy one caramel.

After more strolling, we arrived at the picturesque patisserie, Meert.  We were there to try their famous thin waffles filled with Madagascar vanilla bean butter.  This was the sweetest dessert we had on the tour.  My mom put it well when she said, “This is what those cheap vanilla wafers in the US want to be, but they aren’t even close.” 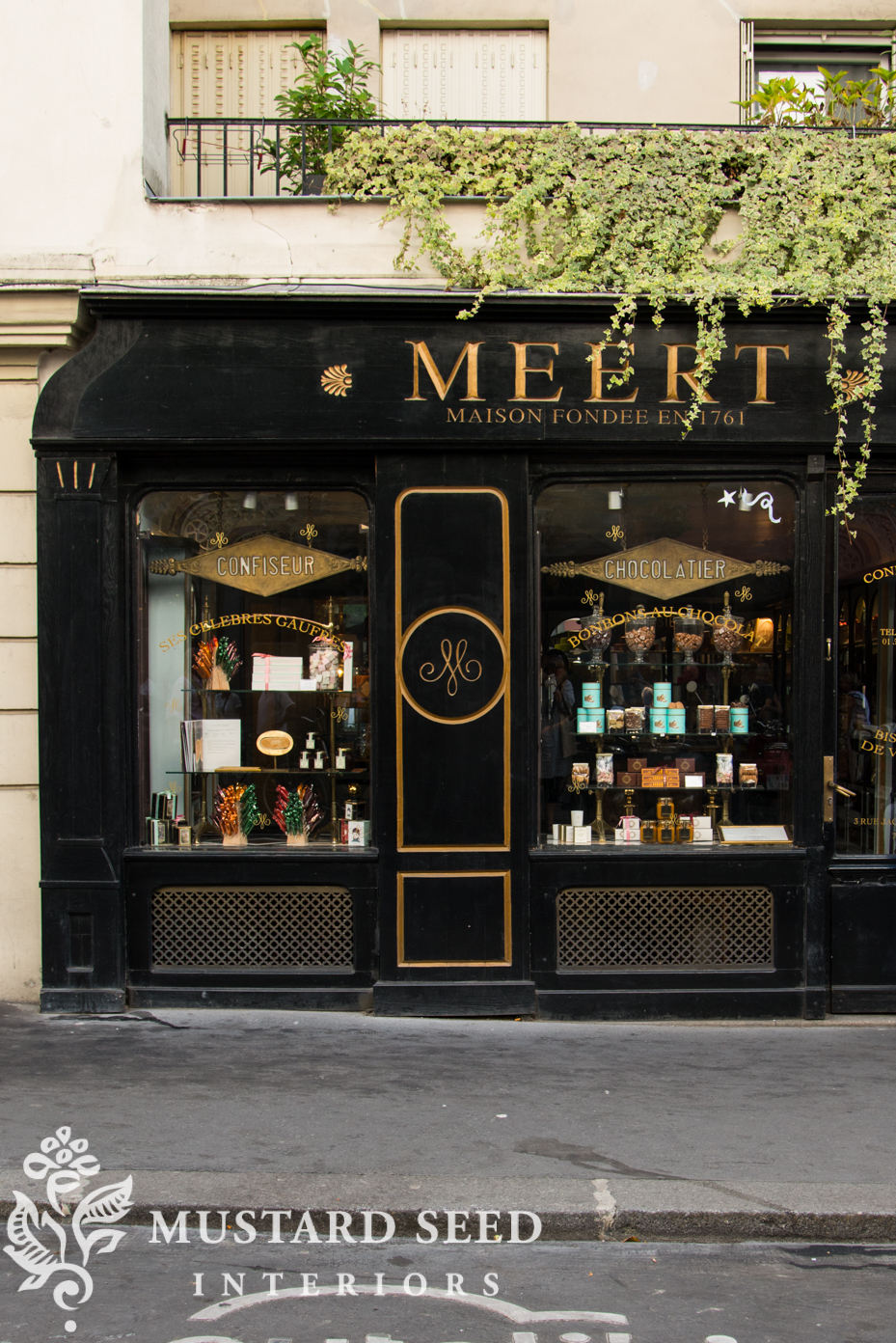 I know the waffles are world famous, but I must say that the interior of the shop was even more delicious to me than the waffles.  With antique display cases, beautiful boxes of chocolates lining the shelves, and a ceiling painted with puffy clouds filling a blue sky, it was a charming interior. 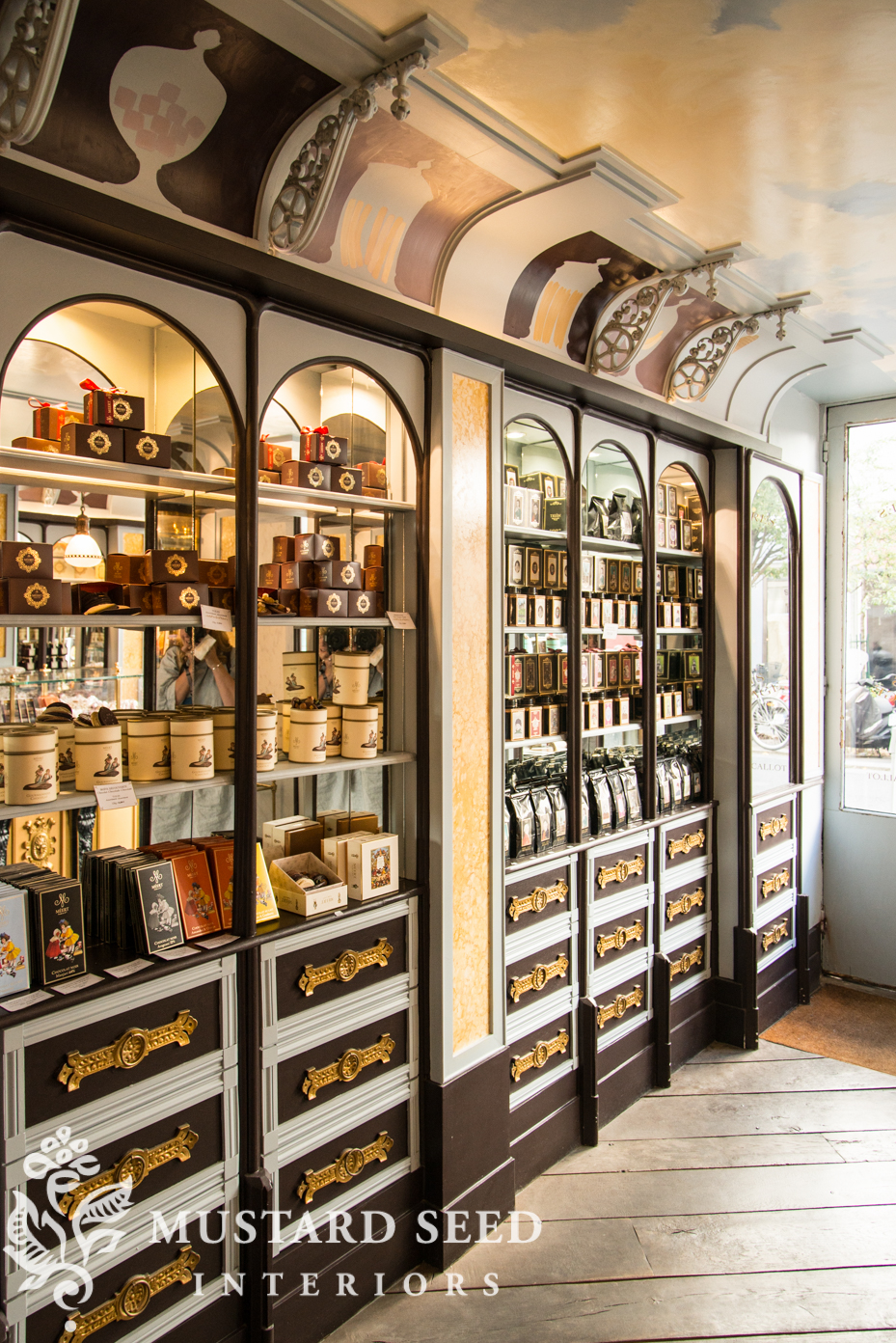 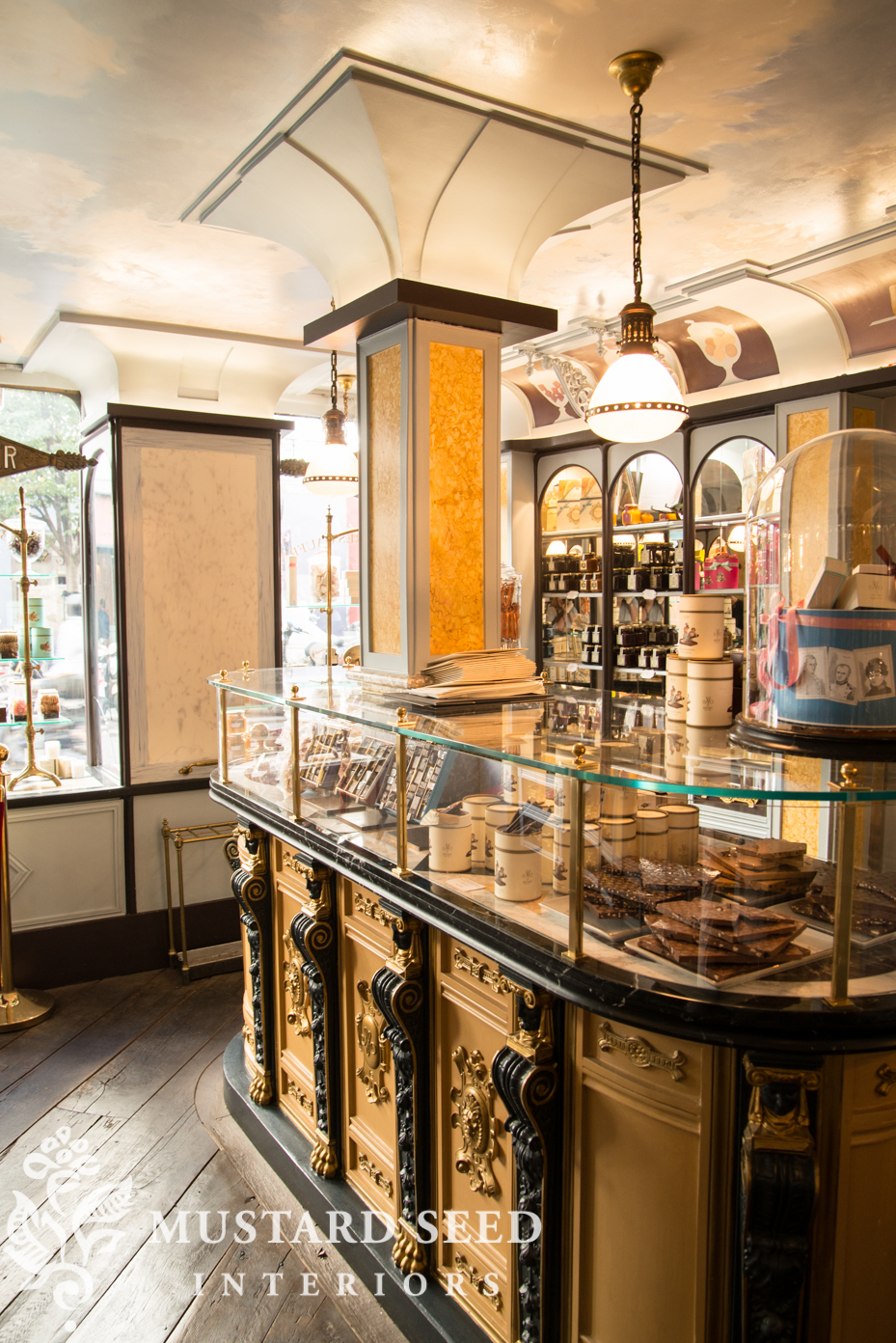 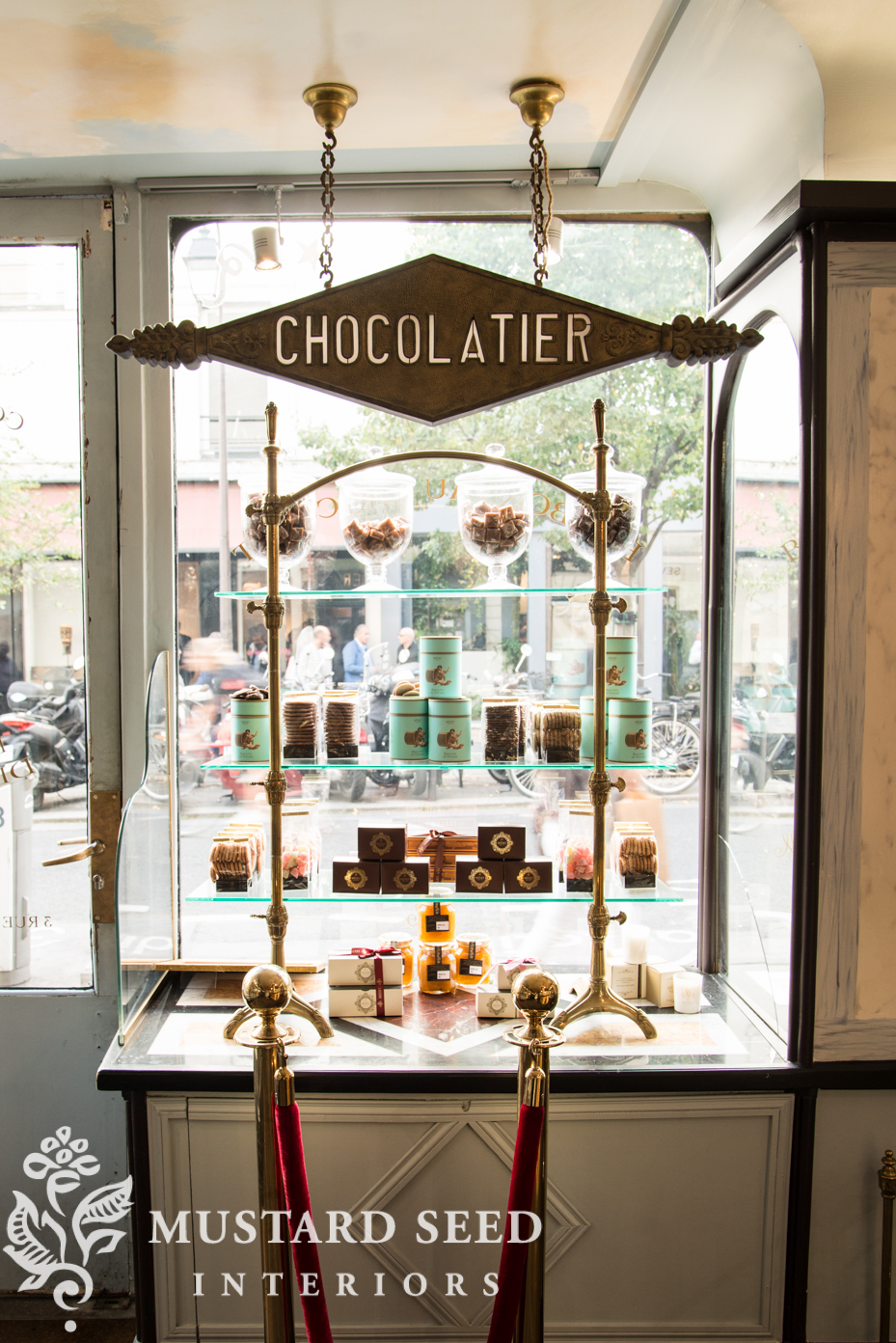 We switched gears from the traditional, to the modern, award-winning chocolates of Patrick Roger. 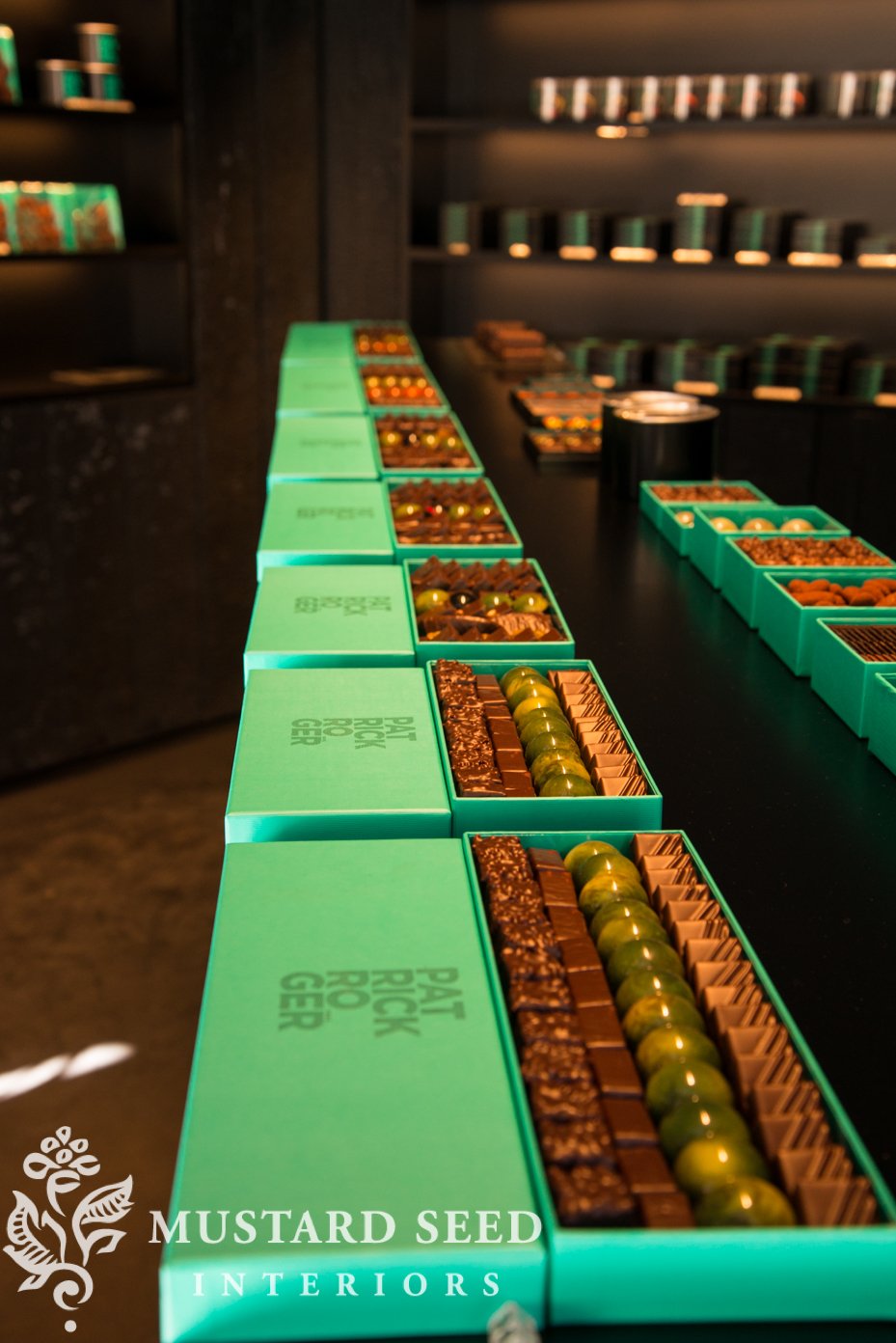 First of all, this is the shop to stop in on a warm day in Paris.  The AC is cranked to keep the chocolates from melting and it felt amazing.

Second, the Pierre Marcolini chocolate was my favorite chocolate until I tried one by Patrick Roger.   Our guide had us taste a thick square without telling us the flavor, so we could guess.  I was just trusting that it wouldn’t be truffle flavored or filled with pâté.    I chewed the chocolate tentatively.  “It’s basil!”  The guide and the gentleman behind the counter congratulated me.  “And what else?”

I continued to chew and had to think for a minute.  My mom chimed in, “Lime.”

It was both the strangest and most wonderful chocolate ever.  The rich chocolate mingled with the fragrant basil and you only tasted the citrus in the back of your throat as it was going down.  It snuck up on you, leaving a hint of freshness at the end.

You could taste, in that tiny complex square, why Patrick Roger is such a celebrated chocolatier.  I would strongly suggest tasting one of his creations if you’re ever near a shop. 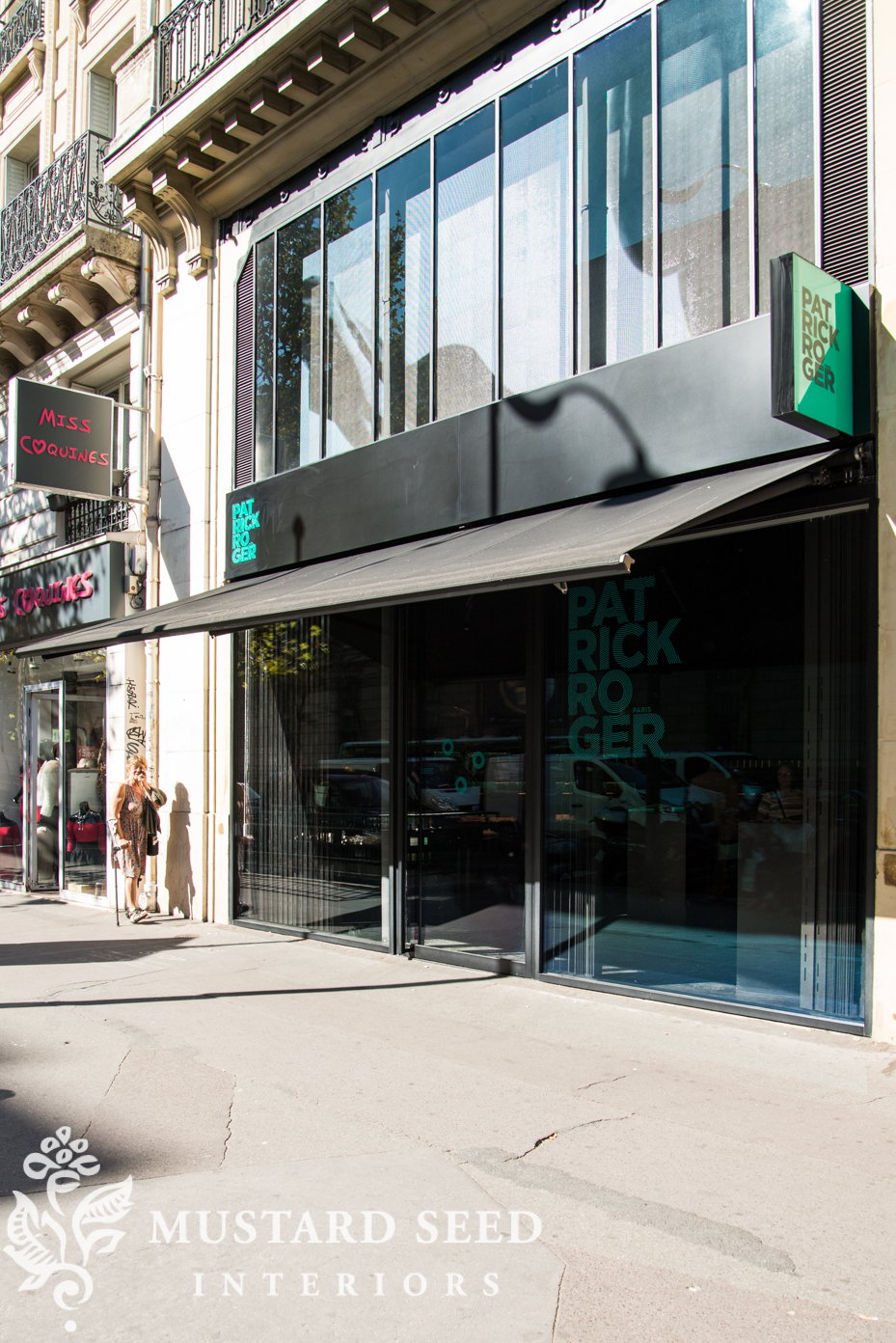 As we headed off for our next destination, I started to wonder if we would be eating desserts until it got dark!  We didn’t know in advance how many patisseries we’d be visiting, and it seemed endless.  (In a good way.)  At the next stop, we tried peach ice cream, which was really more of a sorbet.  It was icy and fresh and a nice choice to have after the caramels, chocolates, and waffle sandwiches. 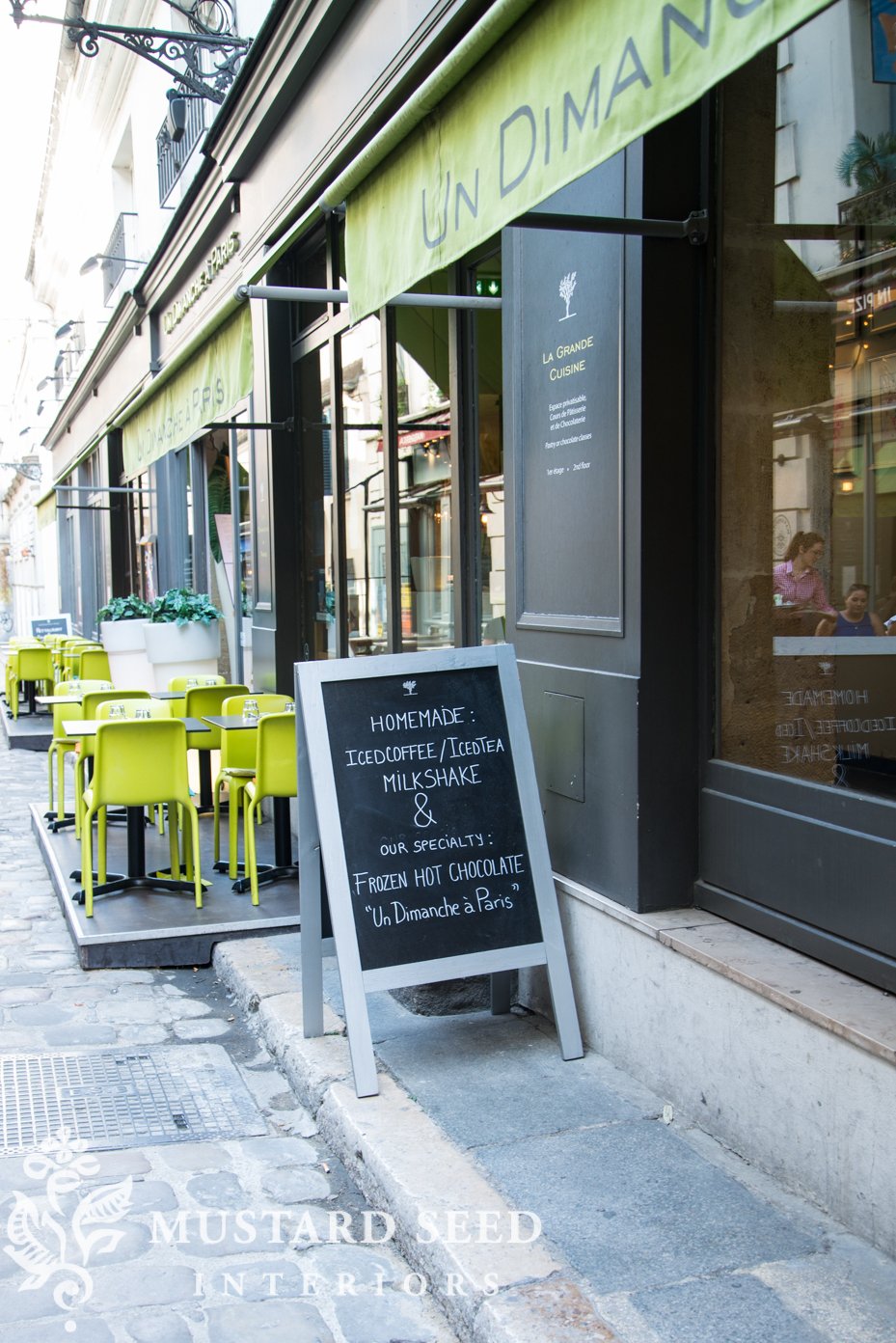 Our guide was also catching onto the fact that I loved the architecture in Paris and the narrow streets in this part of the city.  He started taking small detours to show me streets and buildings I might like.  Philippe pointed out Le Procope, which is the oldest cafe in Paris (dating back to 1686!)  Benjamin Franklin frequented the place when he was in Paris, along with other notable people.  I took a minute to imagine the kind of conversations, writing, thinking, plotting, and planning that took place in that cafe over the centuries. 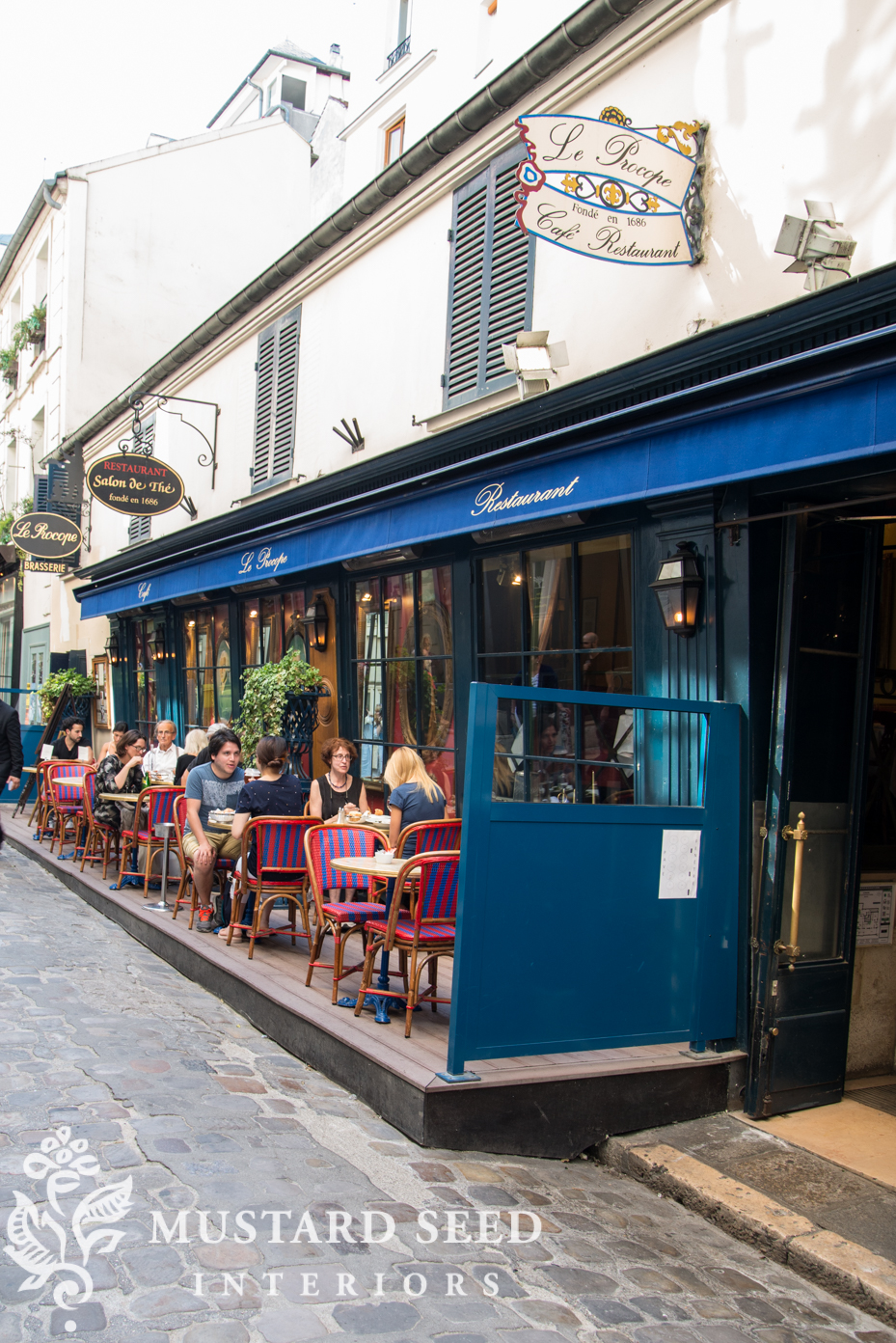 The final stop on our tour was at a small cafe with a view of Notre Dame. I didn’t realized we were close to it, so that was a nice surprise.  We sat at a small table and ate choux pastry with raspberry filling.  It tasted a bit like a thin, savory doughnut with a sweet raspberry filling that tasted like a room temperature sorbet.  The whole thing reminded me of a Berliner (a German jelly doughnut), but not as sweet. 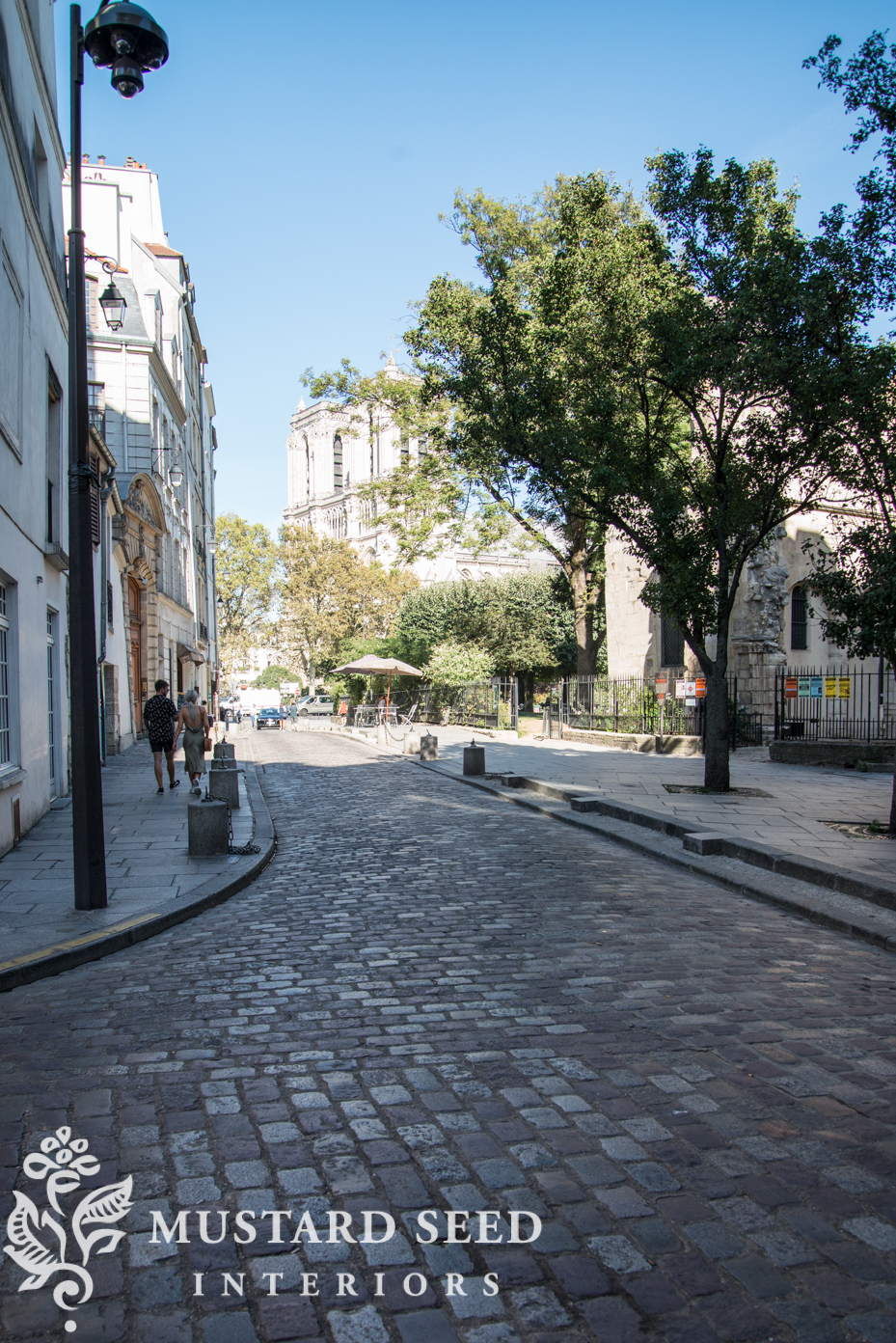 (See Notre Dame through the trees?)

We also saw that we were right next to Shakespeare and Co, a famous book store mentioned in one of Earnest Hemingway’s books.  We were at the end of a tiring day, so we opted not to go inside, but I did take a minute to snap a picture. 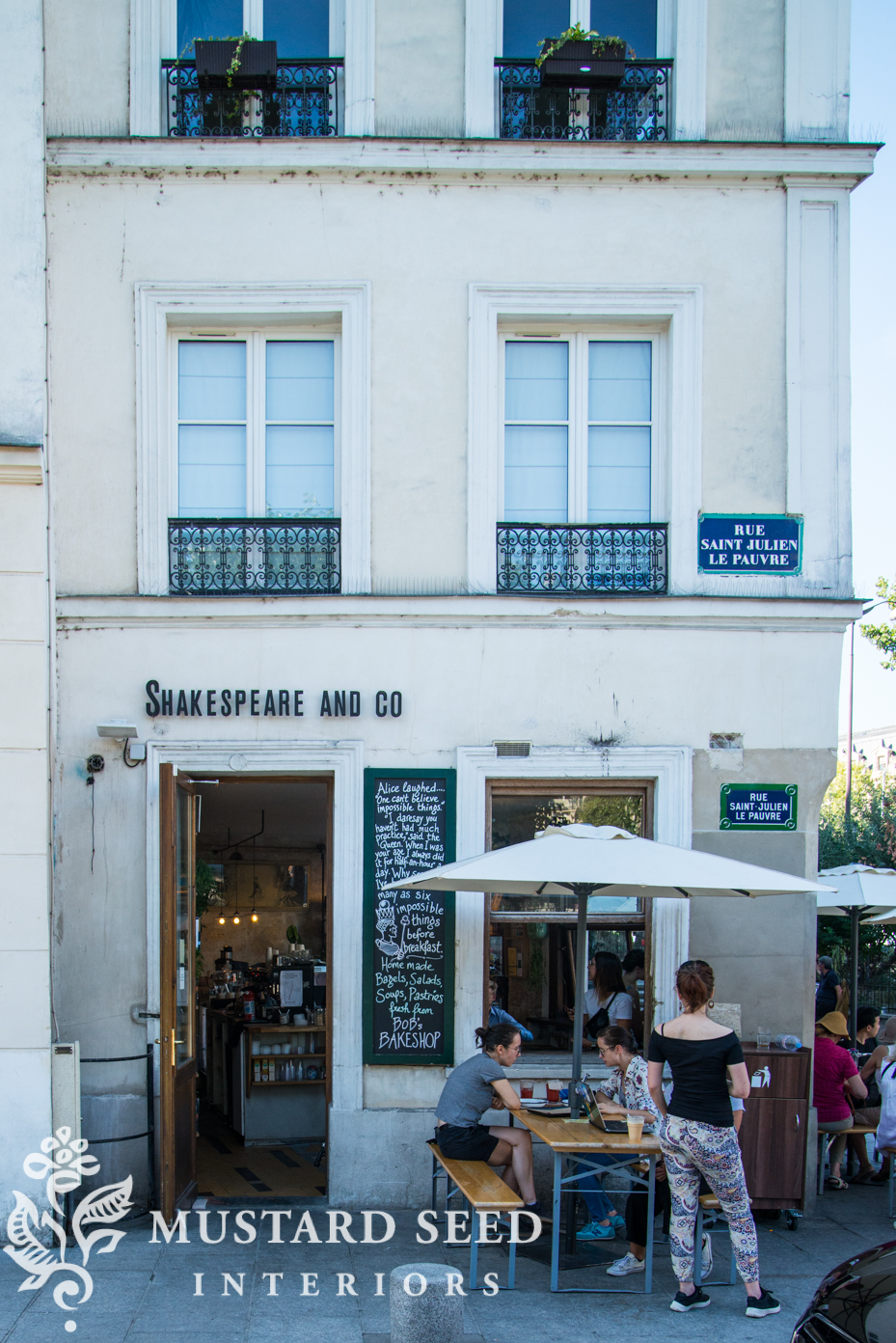 Philippe took some extra time to walk us by Notre Dame and made sure we got back on the metro safely, going in the right direction.  He is also a guide at the Louvre, so he was very knowledgeable about art and architecture as well.  We had some great conversations and we learned a lot more about the city than we expected.

Here are some other pictures I snapped during our meandering… 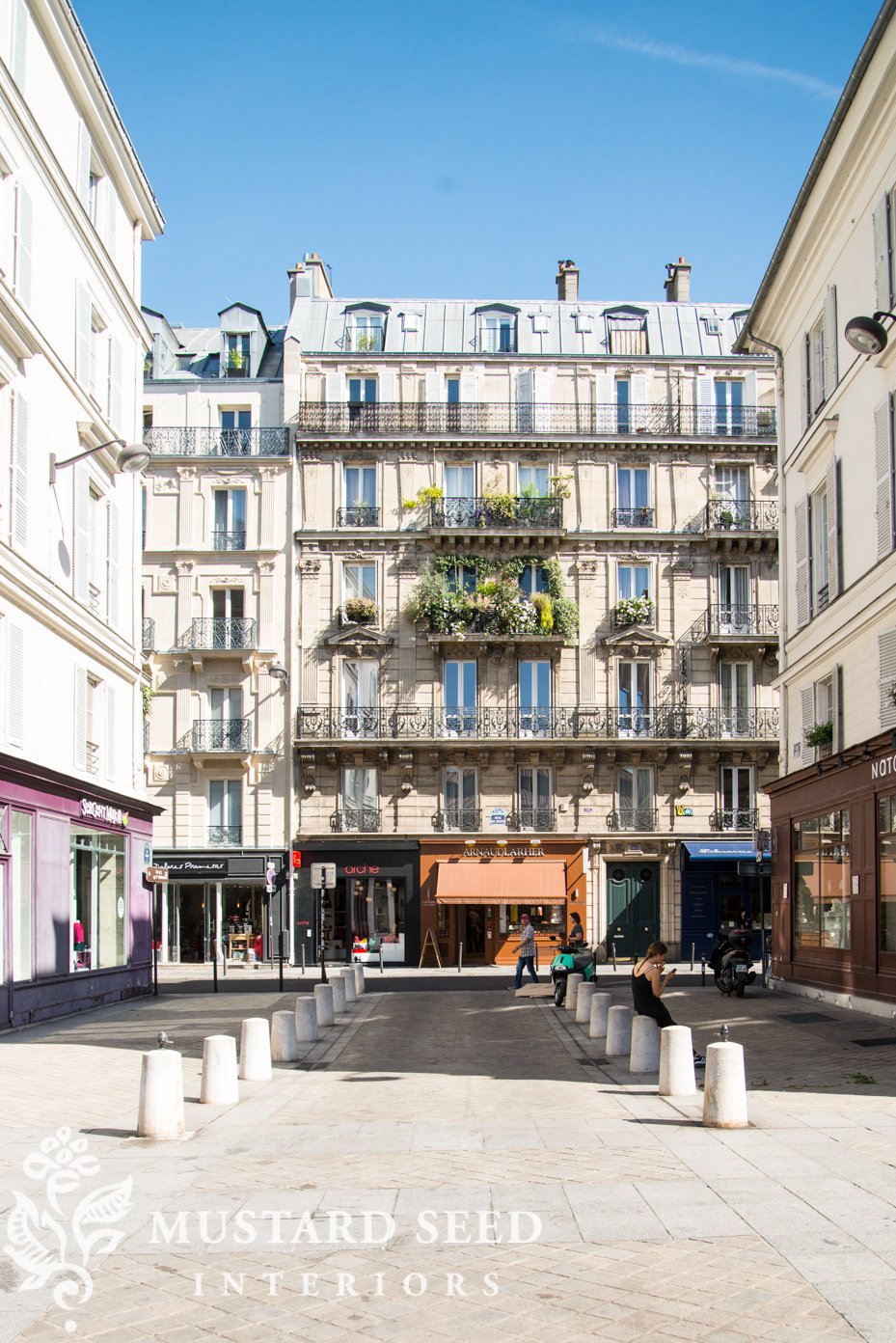 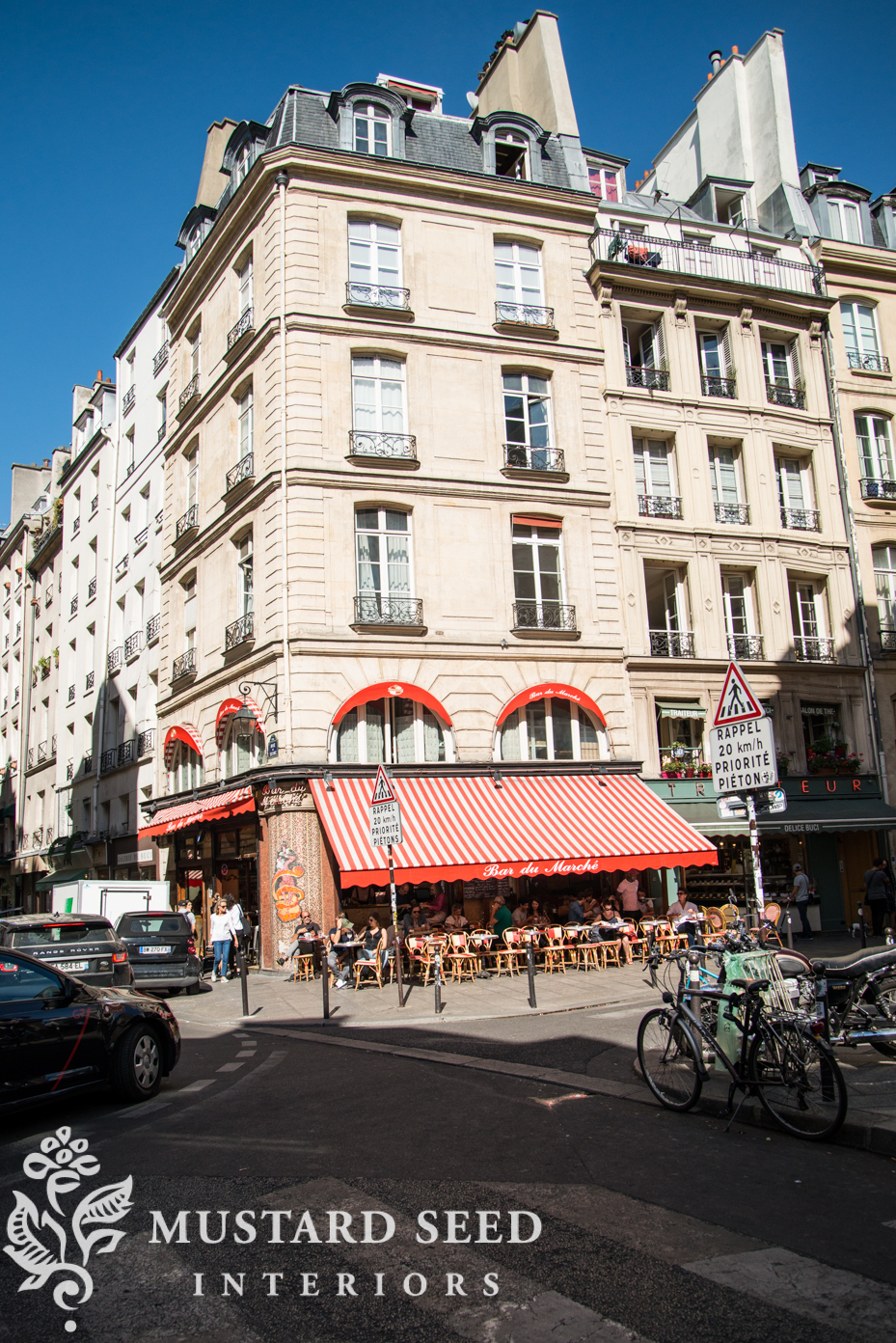 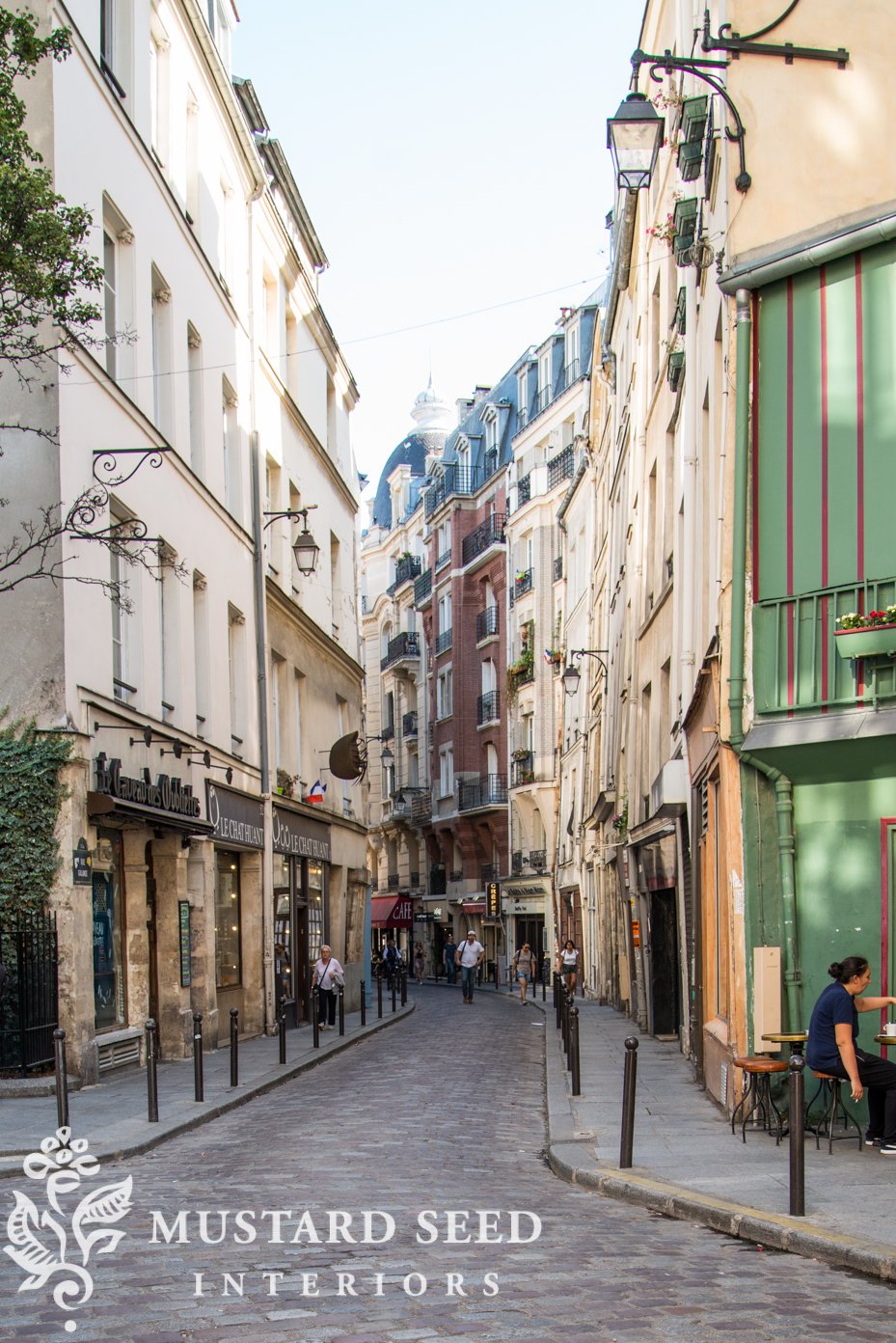 I loved the older part of Paris with the narrow cobblestone streets lined with shops and apartments.  I never grew tired of it. 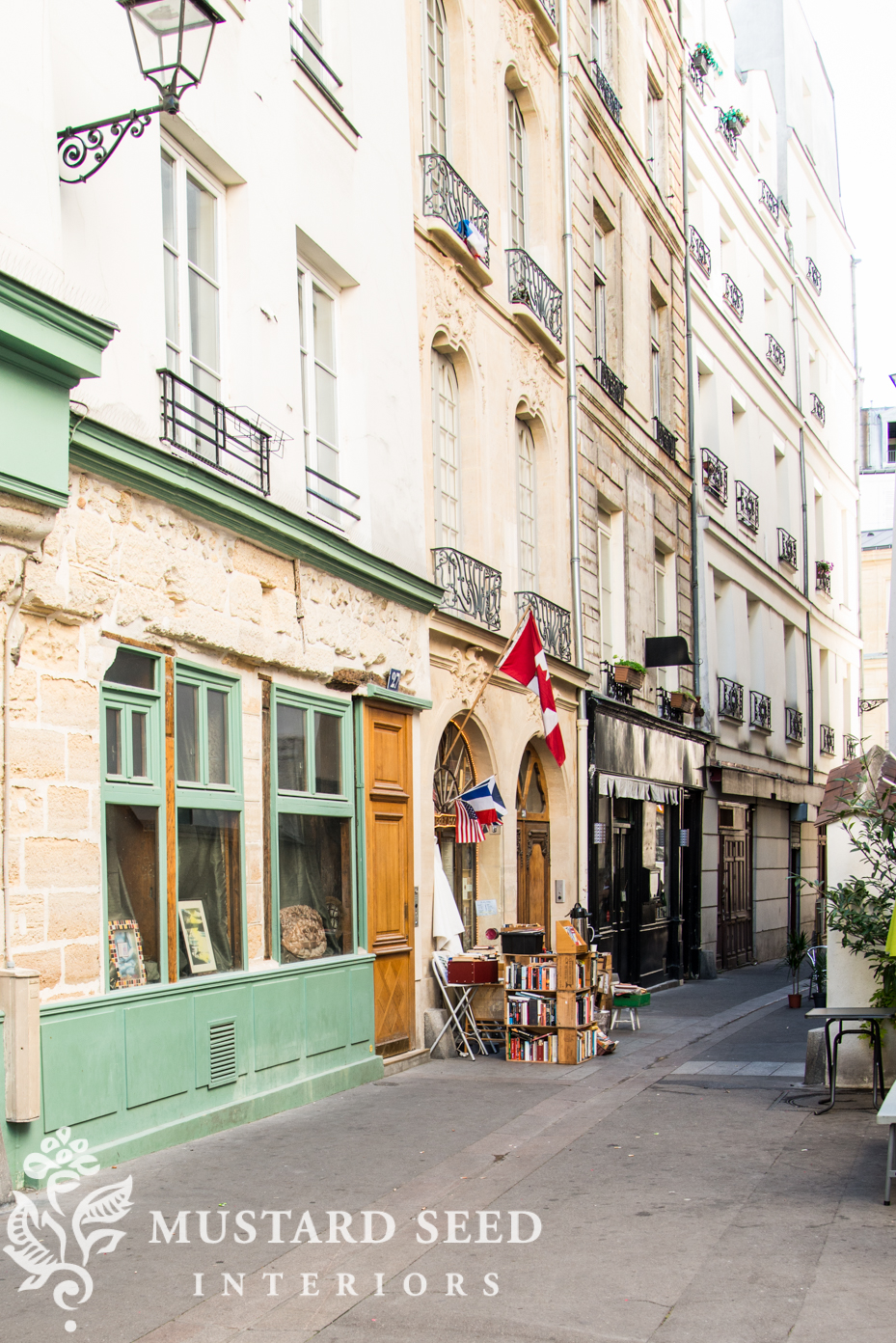 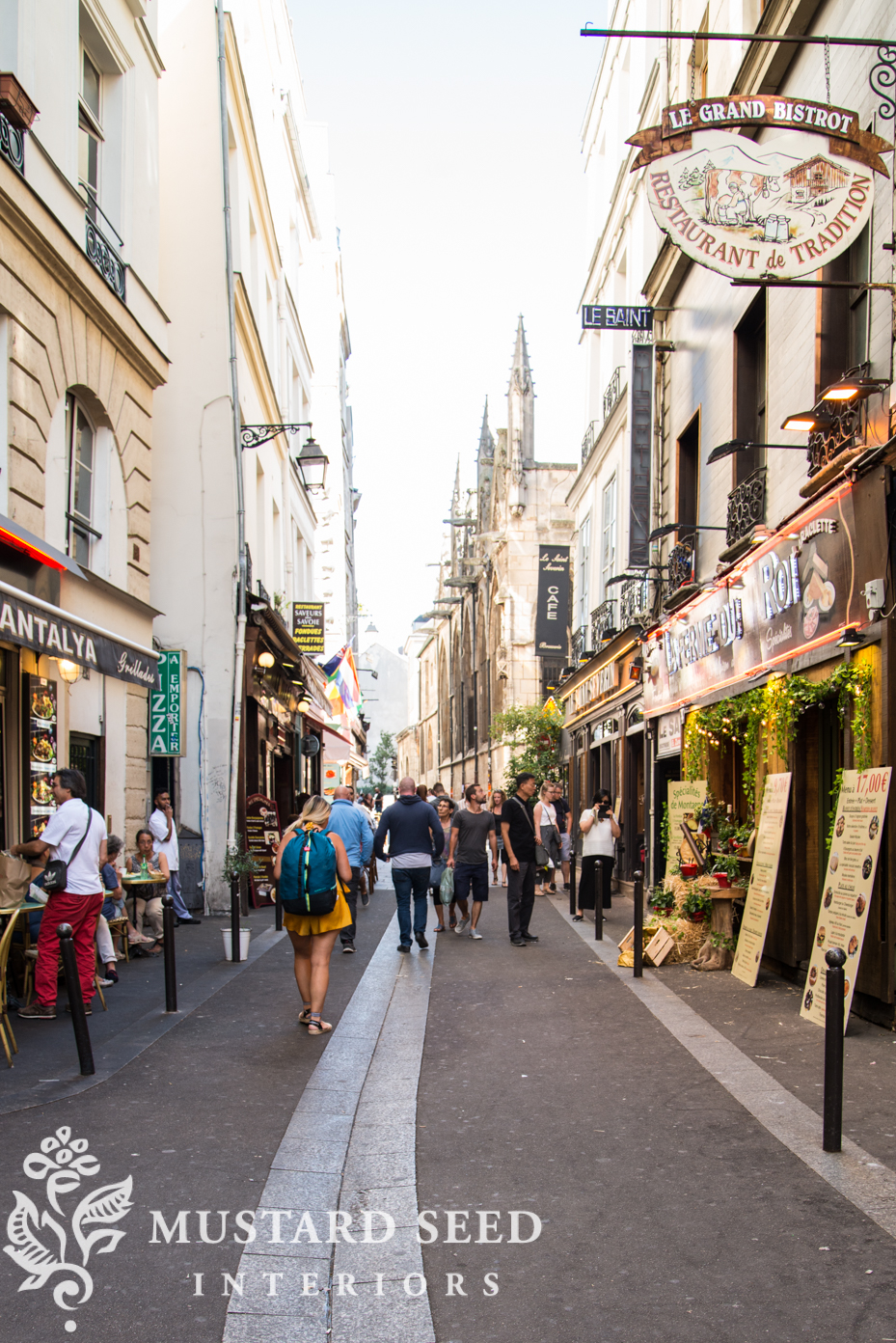 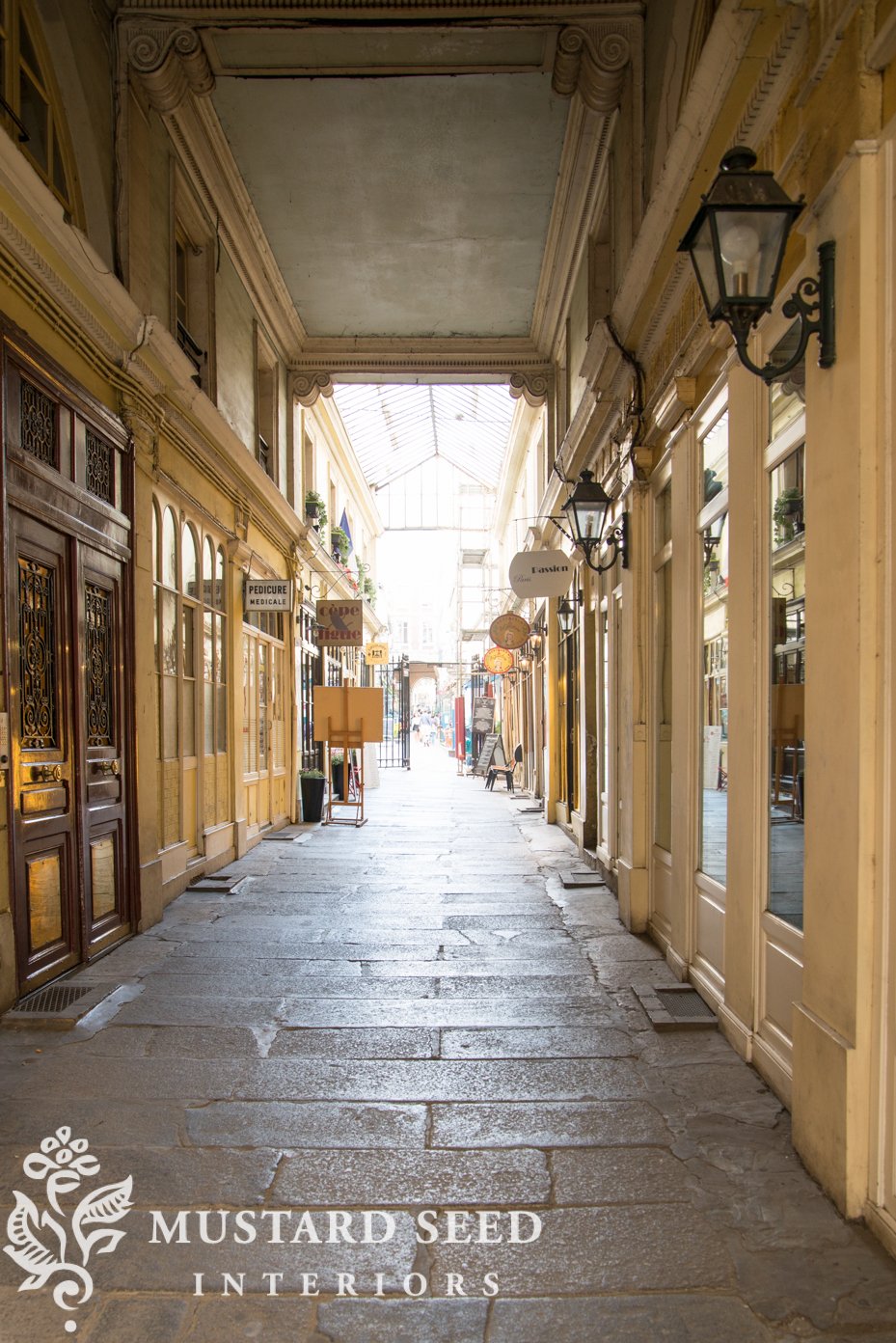 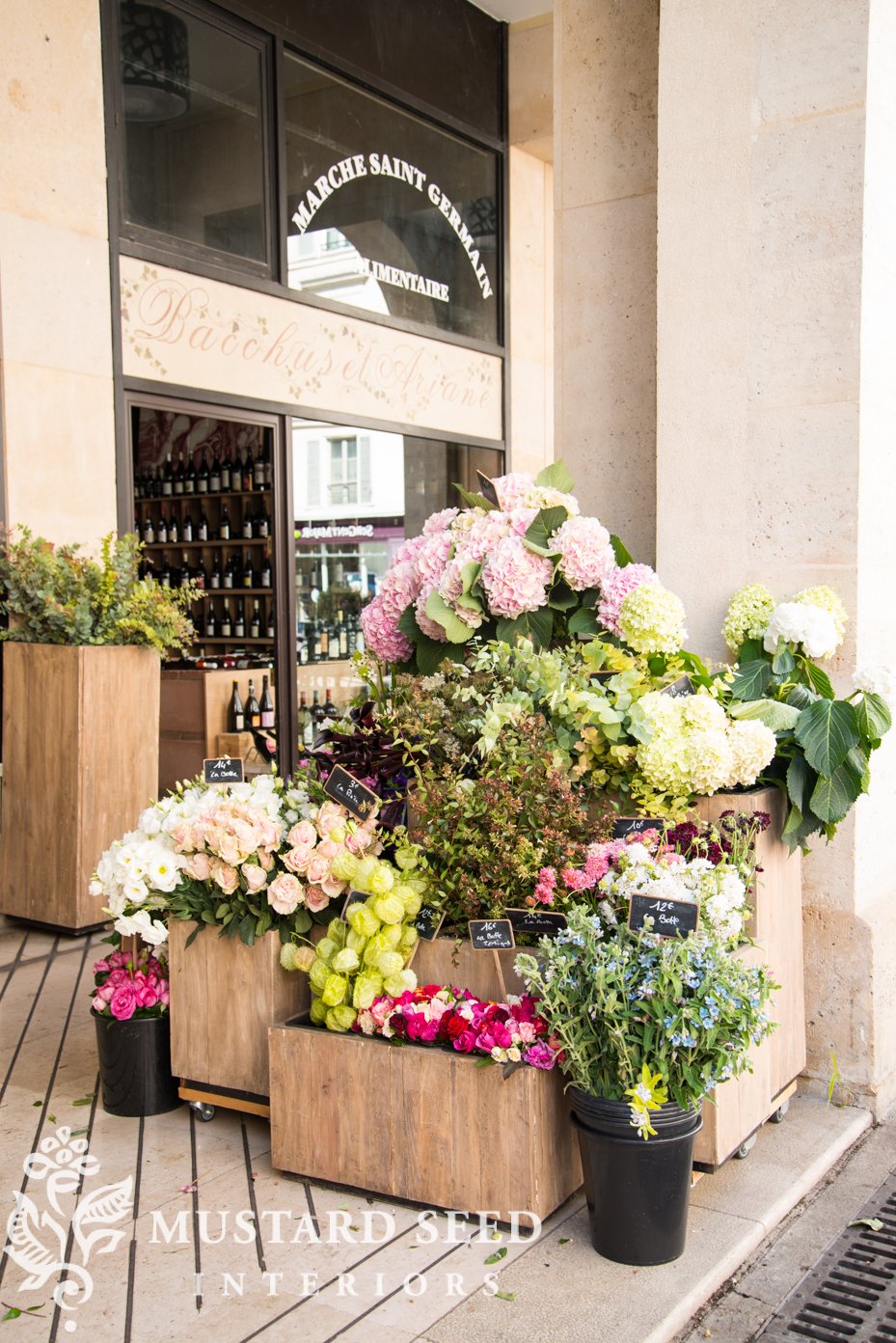 The patisserie tour ended up being one of my favorite outings while we were there.  It wasn’t so much about the sweets, but I loved learning about some of the treasures Paris has to offer from a local who clearly loves its history and culture.

Even if you’re not staying in a Paris Perfect rental, you can work with them to arrange outings, tours, and experiences that cater to a variety of interests and ages.

45 Comments on “the sweeter side of paris”