As I shared a couple of weeks ago, we got the first set of doors for the studio closet built and installed, but unfortunately, they were a little warped!  Ah!  We were trying to make this a simple, easy project, but these doors were not playing along with that and made things complicated.  They were warped just enough so they wouldn’t even catch on the magnetic catches we installed.  They would just pop right off.

It was a drop-head-in-my-hands moment. 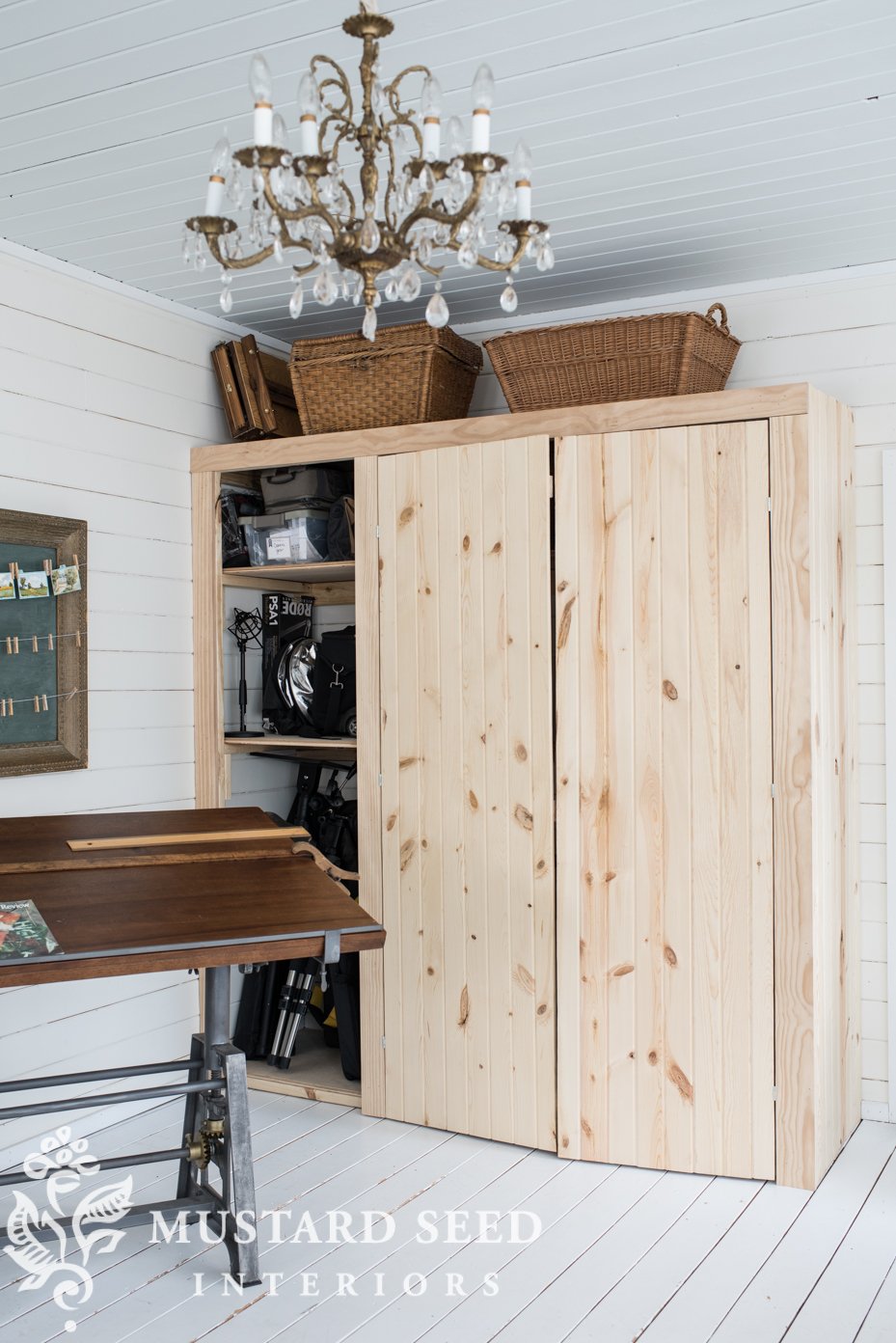 The good news is that they didn’t look that warped or that bad and there was a fix that did not involve taking anything apart or building new doors.  (Which would not have fit in the simple/easy plan.)

I bought a piece of hardware called a turnbuckle.  It is made specifically for screen doors, but I watched tutorials where it was used on gates, shed doors, and even cabinet doors.  I wasn’t able to find them locally, so I ordered them HERE off of homedepot.com.  They measure 42″ long, which was just enough to reach from brace to brace.

I have to admit that I was a little skeptical, but they actually worked!  I installed the first one on the bottom of the right door, positioning the turnbuckle so it stretched from the corner of the door that stuck out to the brace.  I then tightened the center with a pair of pliers. 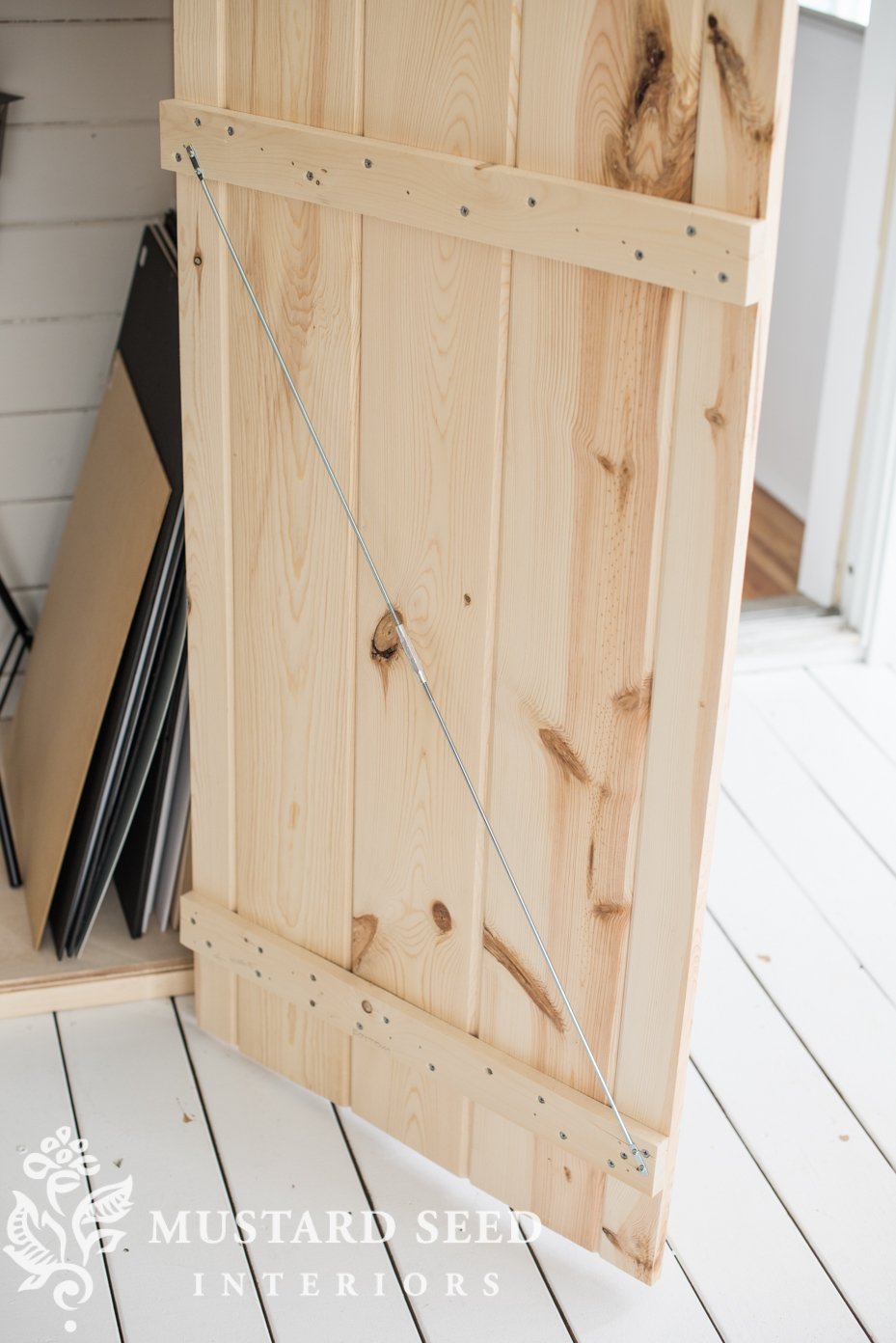 Anything with tension makes me nervous, so I was tightening the bolt (I guess that’s what you call it) with my head turned away and my eyes closed!  I know…silly.  I’m just expecting it to fly off at my face at any moment.  It didn’t, though.  This is made for tension and it was just fine. 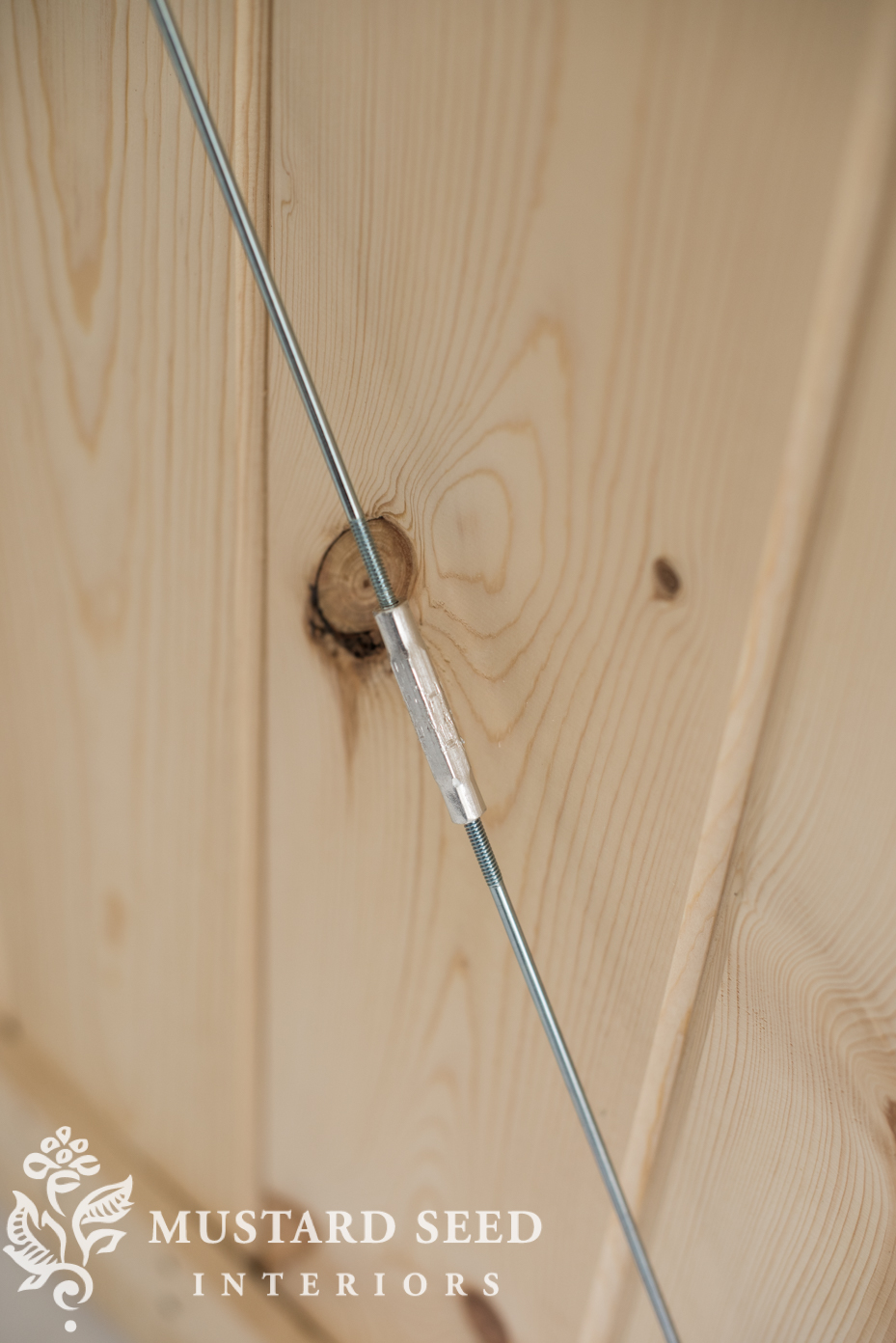 The top of the left door was warped, so I installed another one from the top corner to the center brace and tightened that one as well.  It’s still not perfect, but it’s so much better.  As the wood acclimates, we’ll tighten them again to see if we can get them straightened out even more. 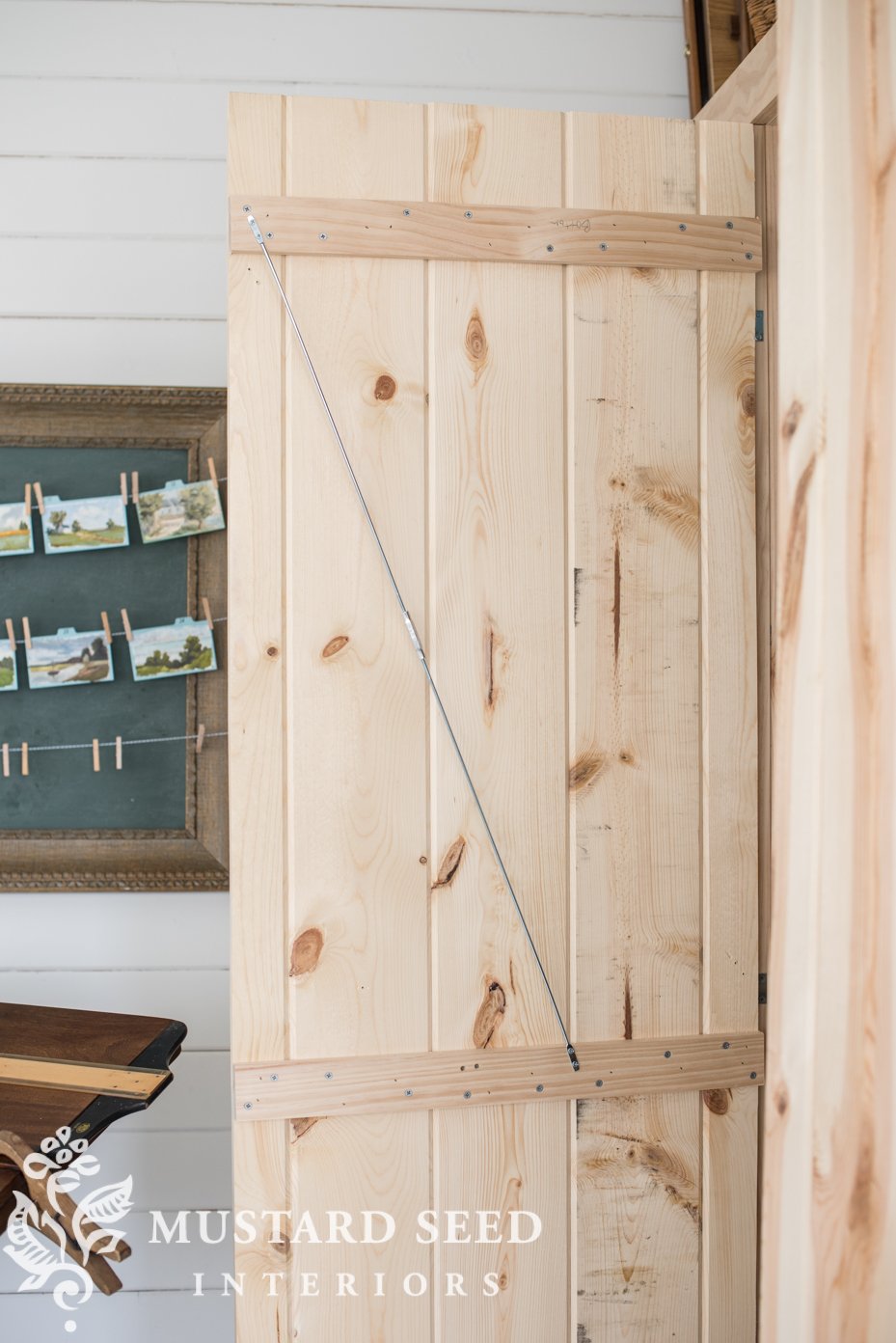 We have one more small door to build (which Jeff told me is happening tomorrow), and then I’ll prime, paint, and add the hardware.  This project has been slow-going, but it’s almost done!

Since turnbuckles aren’t that exciting, I thought I would also share a couple of my latest magazine features…

The German magazine, Land Leben, featured the mural in my dining room… 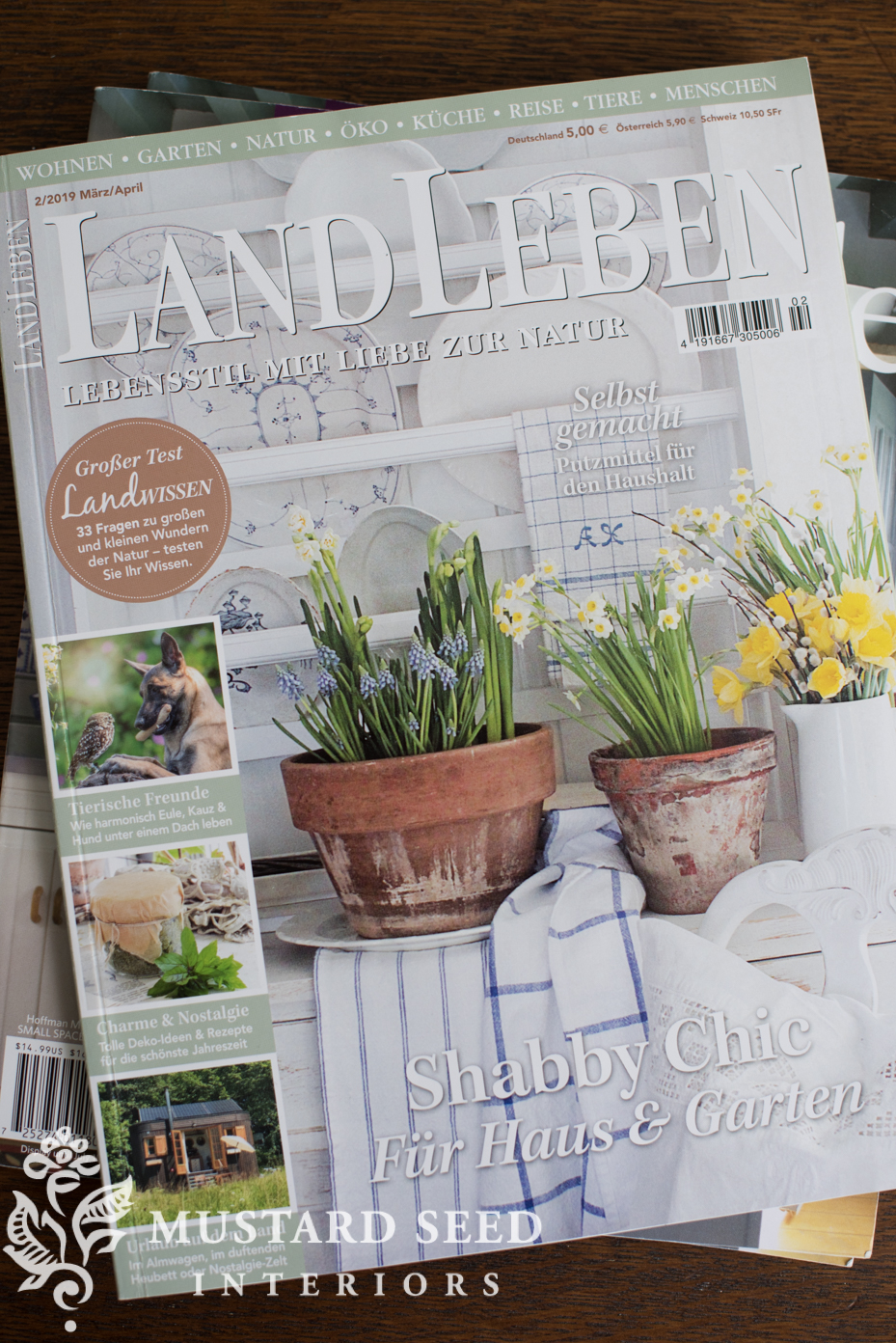 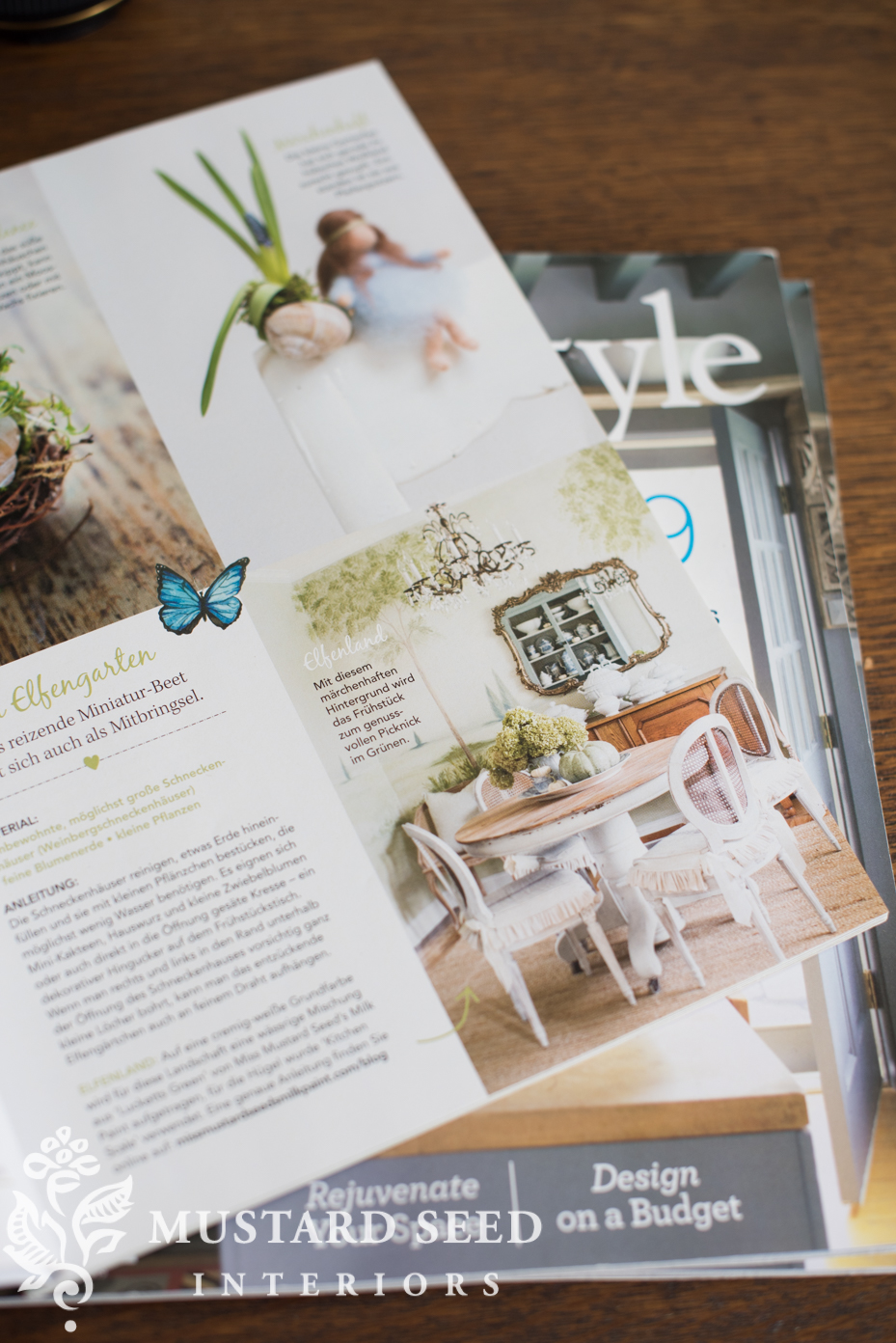 It’s a beautiful home magazine and I wish it was easier to find in the US.

An old article was also republished in Home Style magazine… 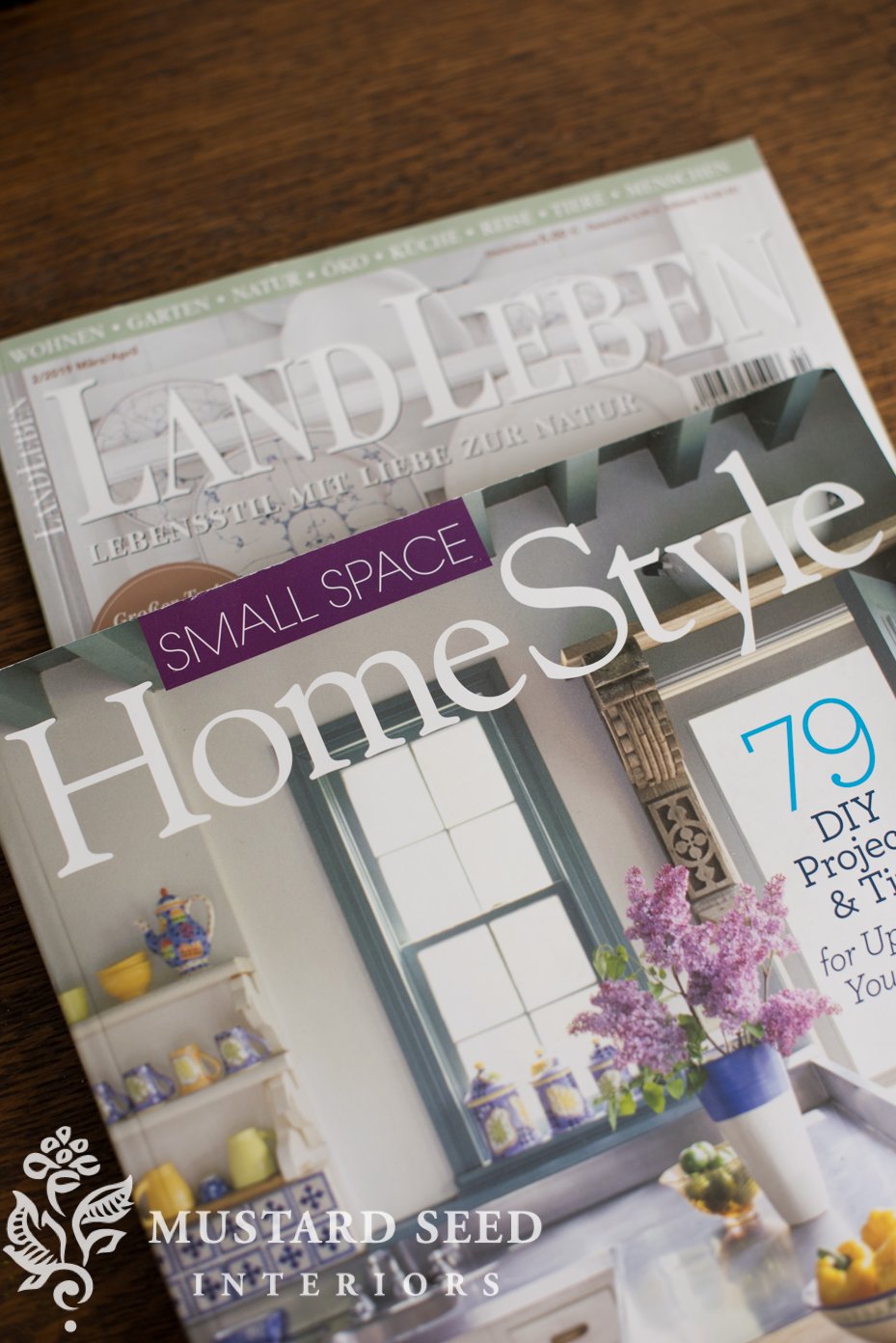 This one goes way back to the blue and white curtains in my dining room! 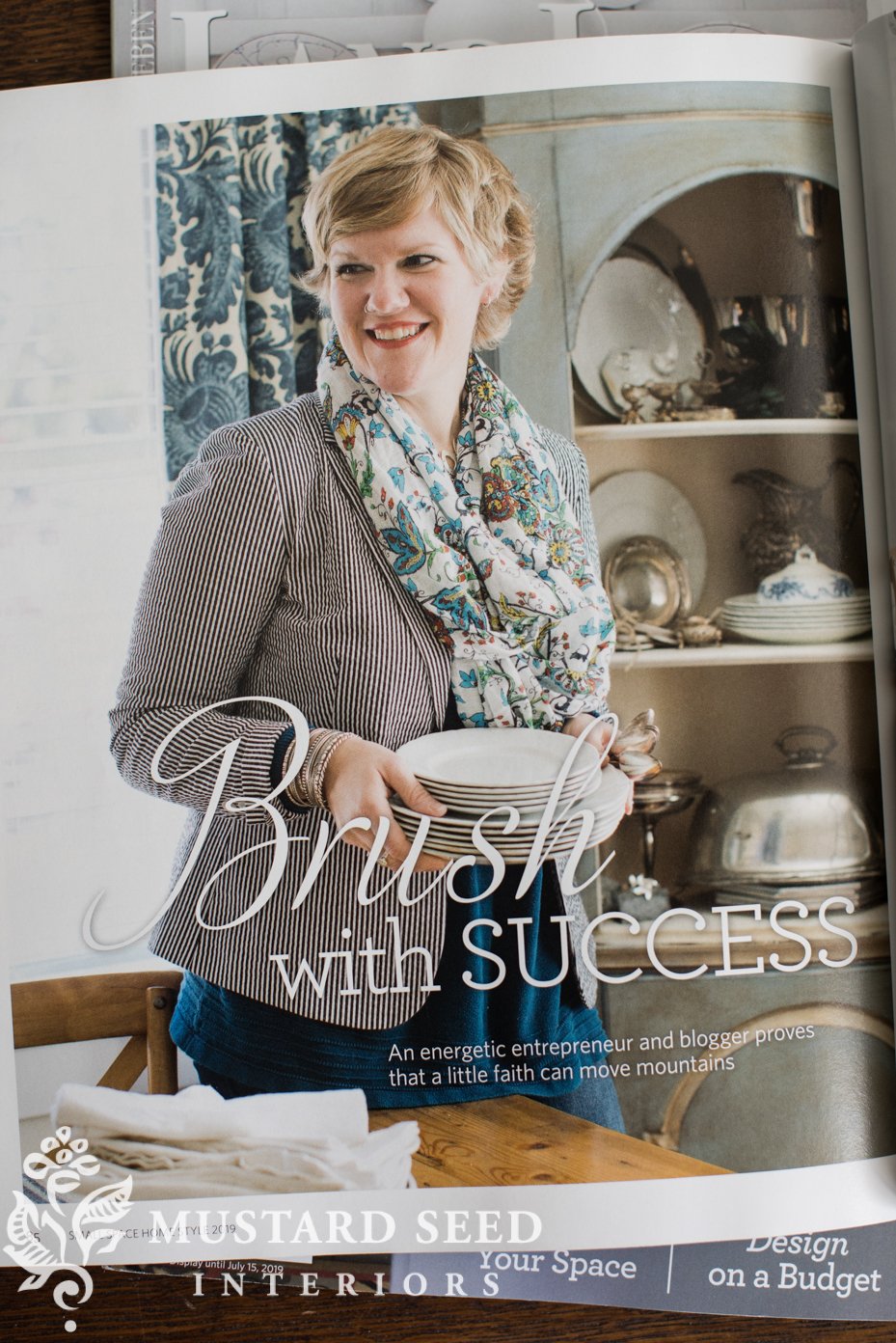 You just never know what happens to those old articles and photos and when they’ll show up again! 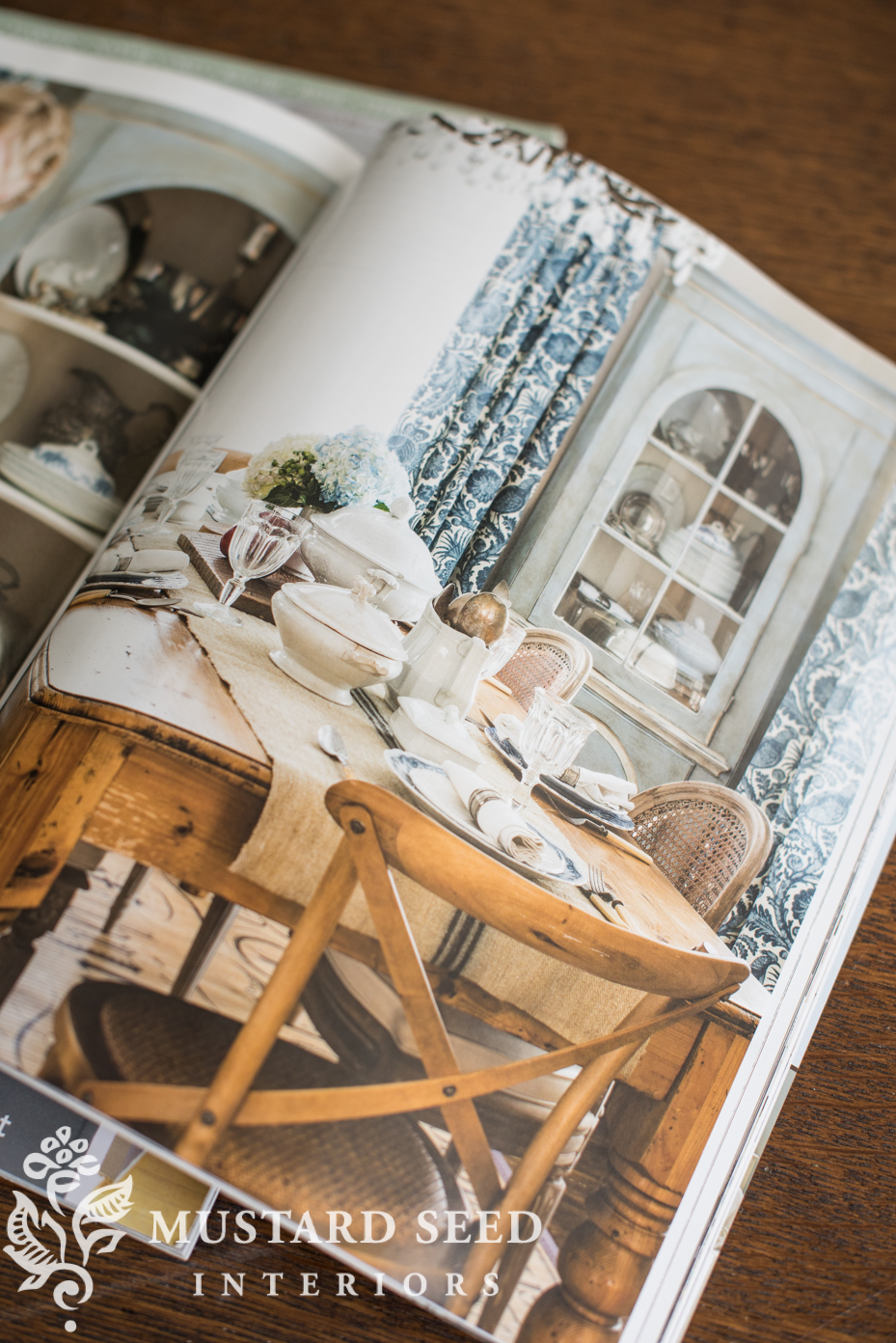 And, lastly, The MMS Milk Paint brand has a big, beautiful, full-page ad in the current issue of Flea Market Style magazine! 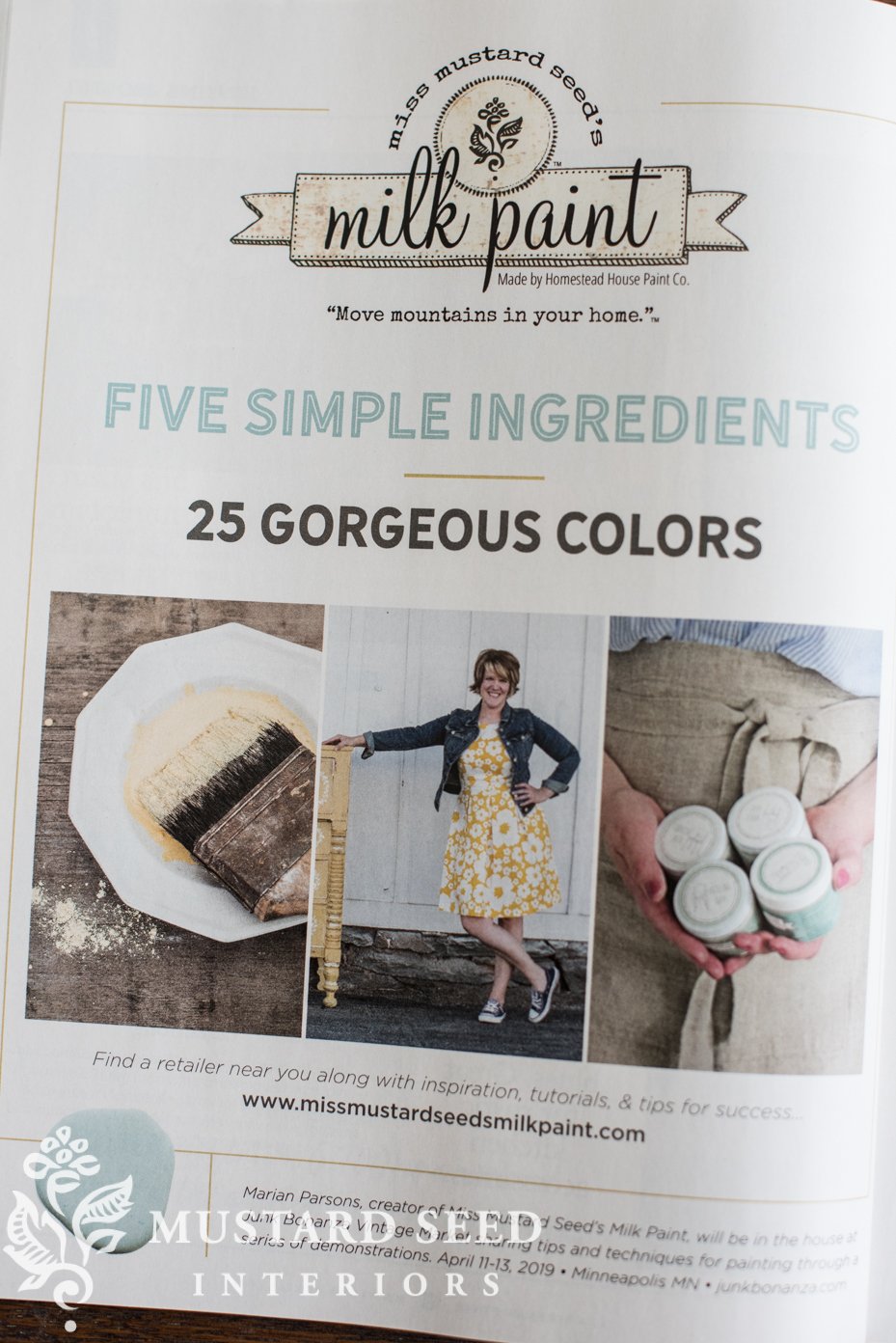 The ad was a part of the collaboration with Junk Bonanza’s recent show in Shakopee, MN.

I’ve shared before that when I first started my business I had a goal to get in one magazine.  I now have several stacks of magazines with features, articles, photos, etc. in them.  Even though it’s a “common” thing these days, it never feels common and I always have the urge to buy several copies and show “my page” to the checkout clerk.

I hope I never lose that sense of excitement…