Now that the kids are on summer vacation, spring is in full swing here in MN!  Seriously, that’s how long it takes!!  The garden is finally more than just a few sprouts.  It still has a ways to go, but I thought I would share how it’s coming along.

The house finches vacated their nest on my Christmas wreath, so I was able to take it down and swap it out for a simple artificial boxwood wreath.  I know this wreath is boring, but I’ve used it for years and it gets me from spring to fall.  (I think I need to turn it or squish it or something to straighten it out…) 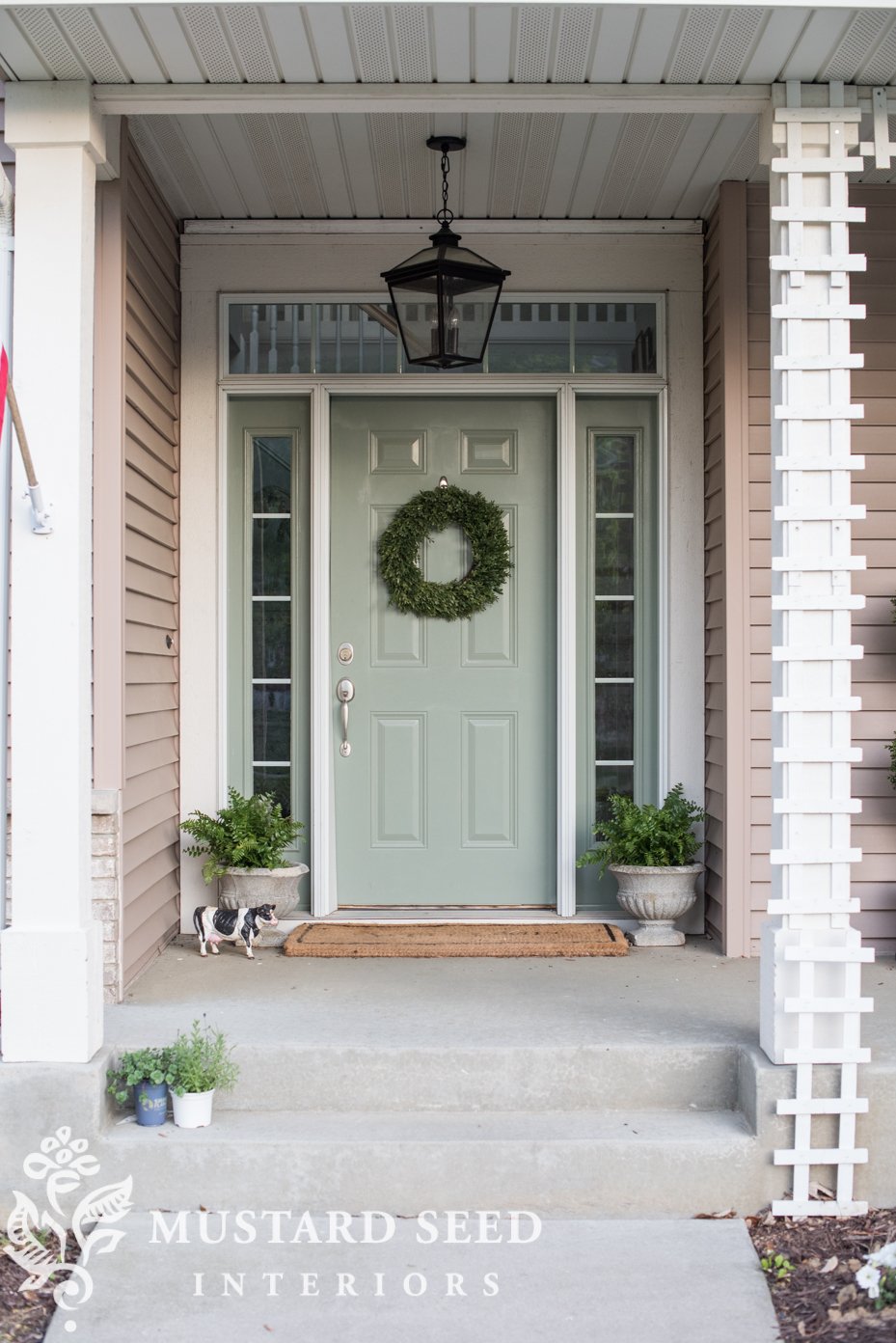 I decided to try ferns in the concrete urns this year, instead of flowers.  They seem to be doing well so far.

I filled the large concrete urn in the middle of the front garden with petunias and a trailing vine.  I can’t wait to see this urn overflowing with flowers.  The ring of hosta bulbs I planted last year came up beautifully!  (I’m always impressed with perennials.  Do they seem like a miracle to anyone else?) 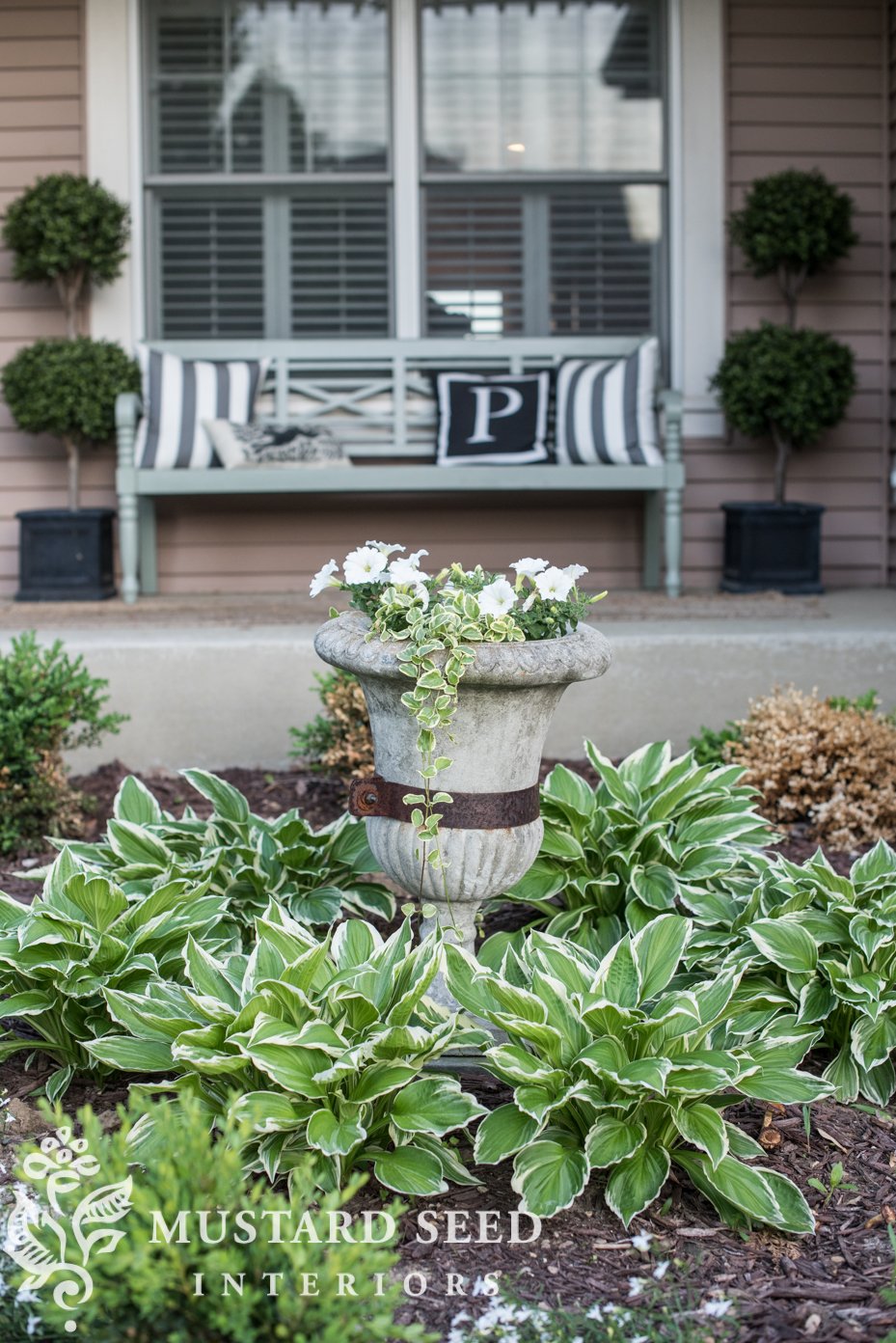 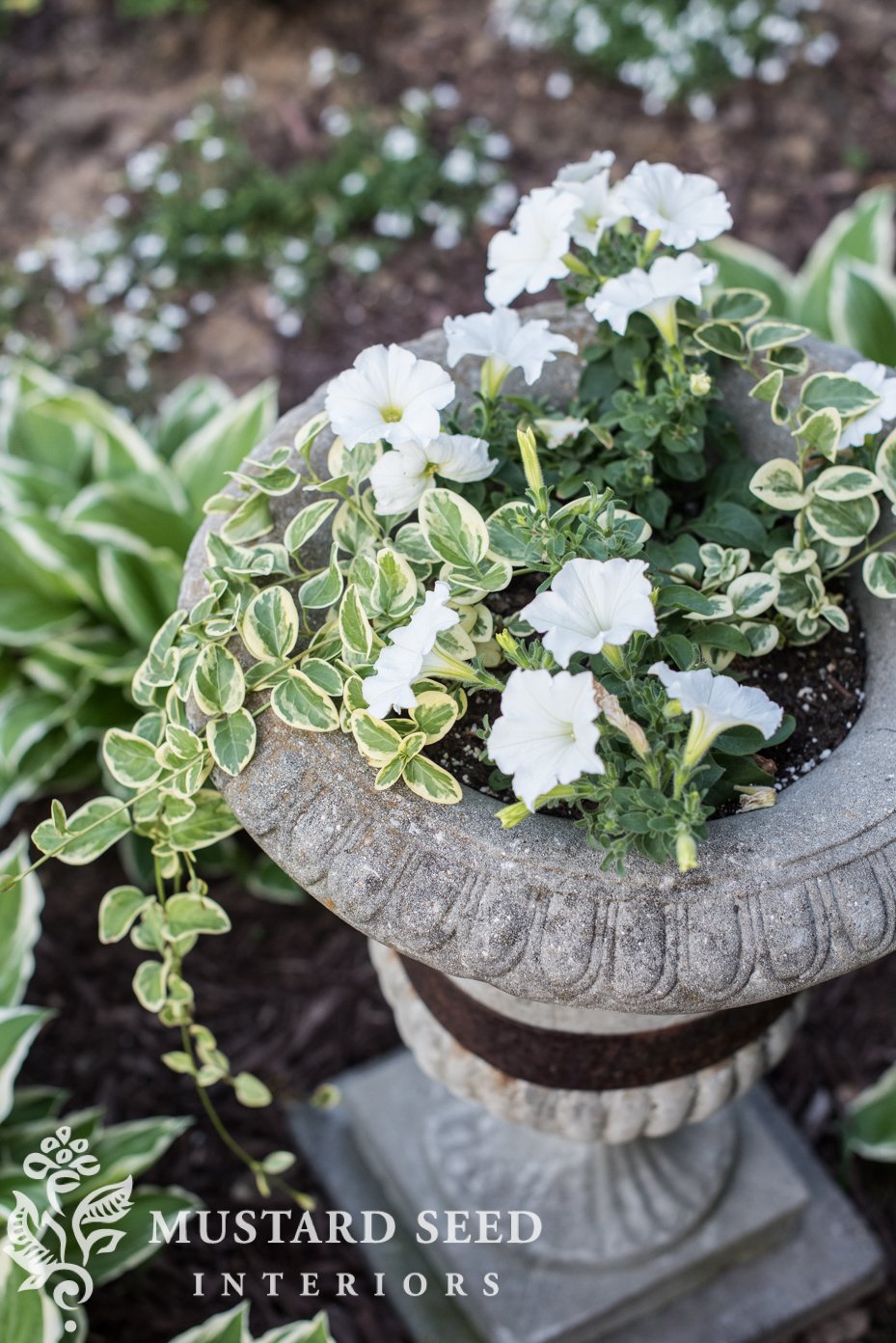 I still don’t know if this concrete urn is the perfect thing for the center of the garden, but I’m just going to go with it until inspiration strikes. 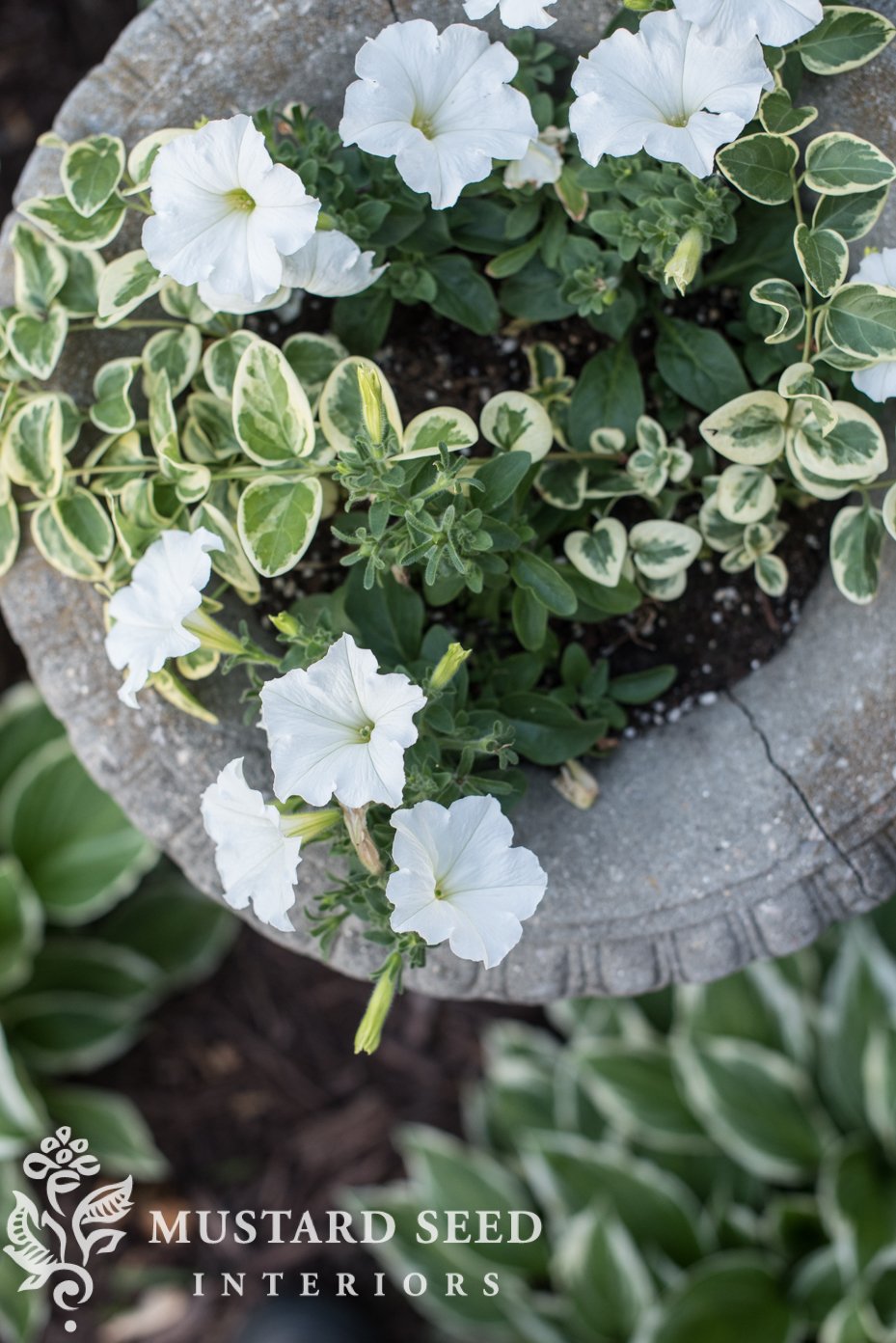 I replaced all of the small boxwoods that were killed this winter.  I did a lot of reading on boxwoods and how to winterize them for next year.  I think there were several issues – they didn’t get enough water in the fall before the ground froze, they had too much heavy snow sitting on top of them all winter, and it just got too cold.  Two of them survived.  All of the rest were so dry and dead, they were almost white! 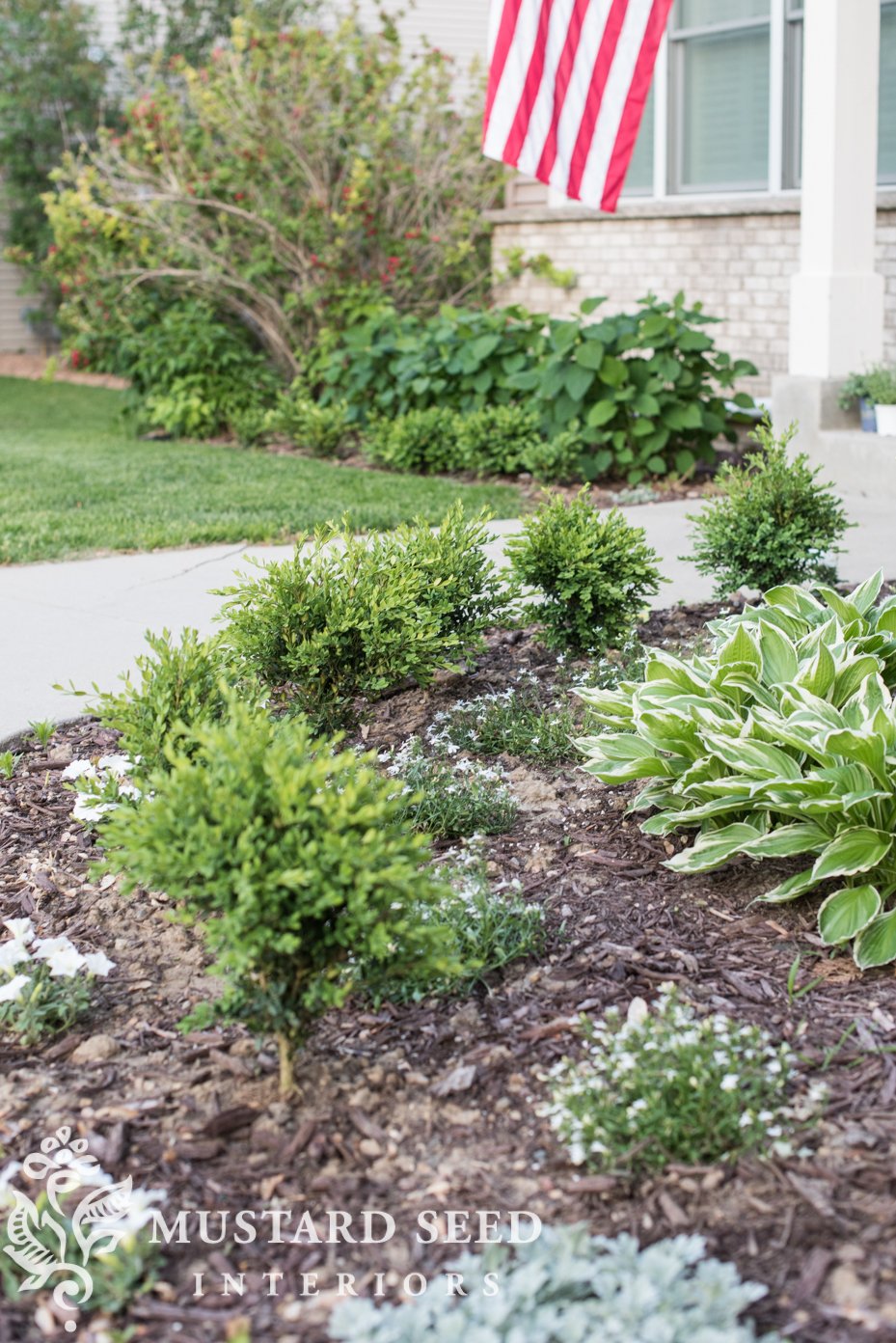 So, I’m trying my boxwood hedge one more time and if they don’t make it this year, even when babied through the winter, then I need to forget the idea and go with something heartier and lower maintenance.

I also planted some perennial mounds in a few places and sedums that will creep around a bit.  I admit that I can be a little too “tidy” when it comes to planting.  I really should have a Victorian-era English garden plot that can be planted in diamonds and rows with a boxwood hedge around it.  So, I’m planting some of these mounds and creepers to let it be a little unstructured and wild.  I actually really love gardens that look a little wild, I just don’t know how to do that well!

I just don’t think I have developed the eye for gardening, yet, but I’ll keep trying!  I get a little impatient with the fact that plants don’t stay put and they don’t always do what I think they will do. 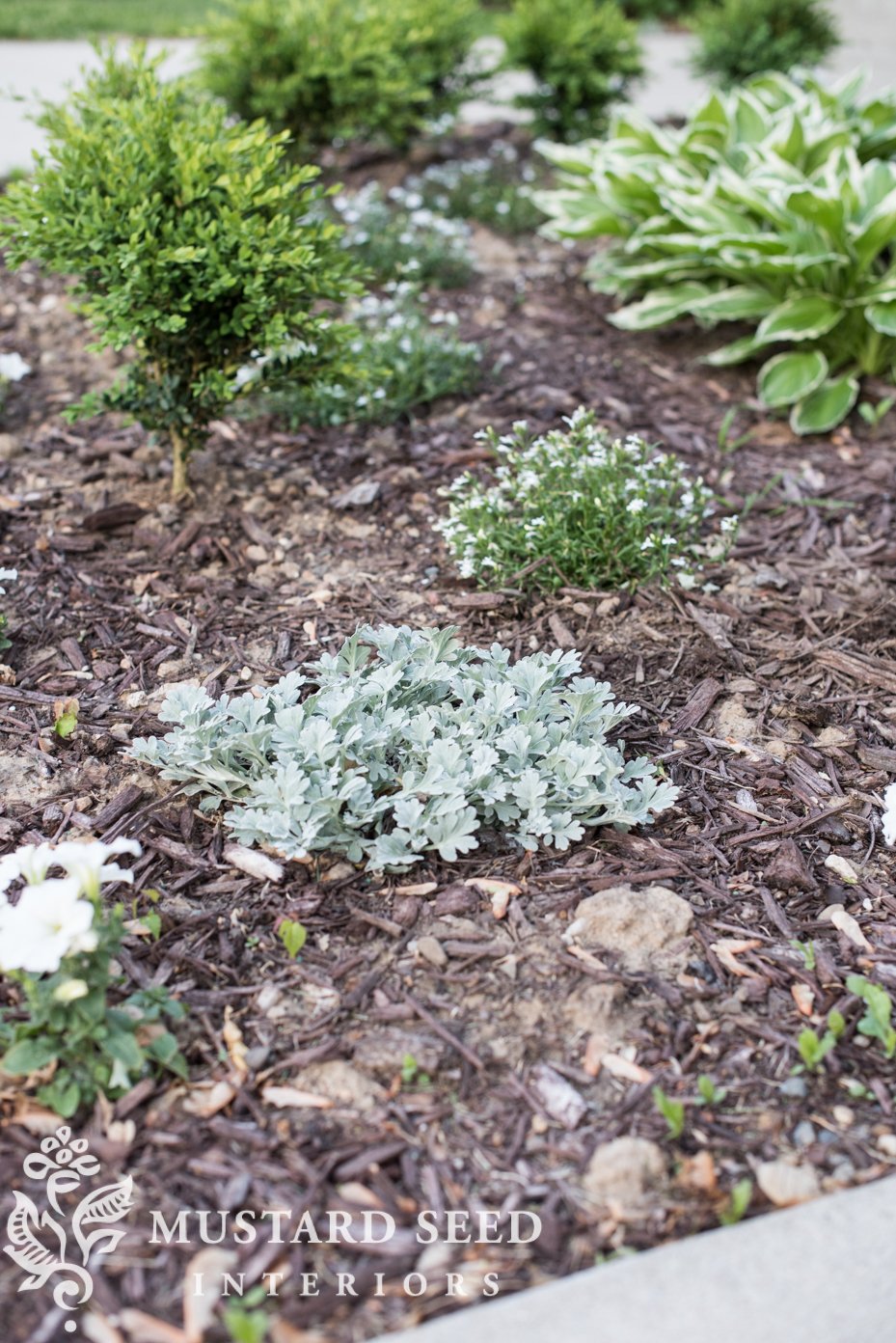 I planted Artemisia (Silver Brocade, perennial) and Dichondra (Silver Falls, annual) and a sedum variety to creep around the stones…

For the flowers, I planted petunias and lobelia. 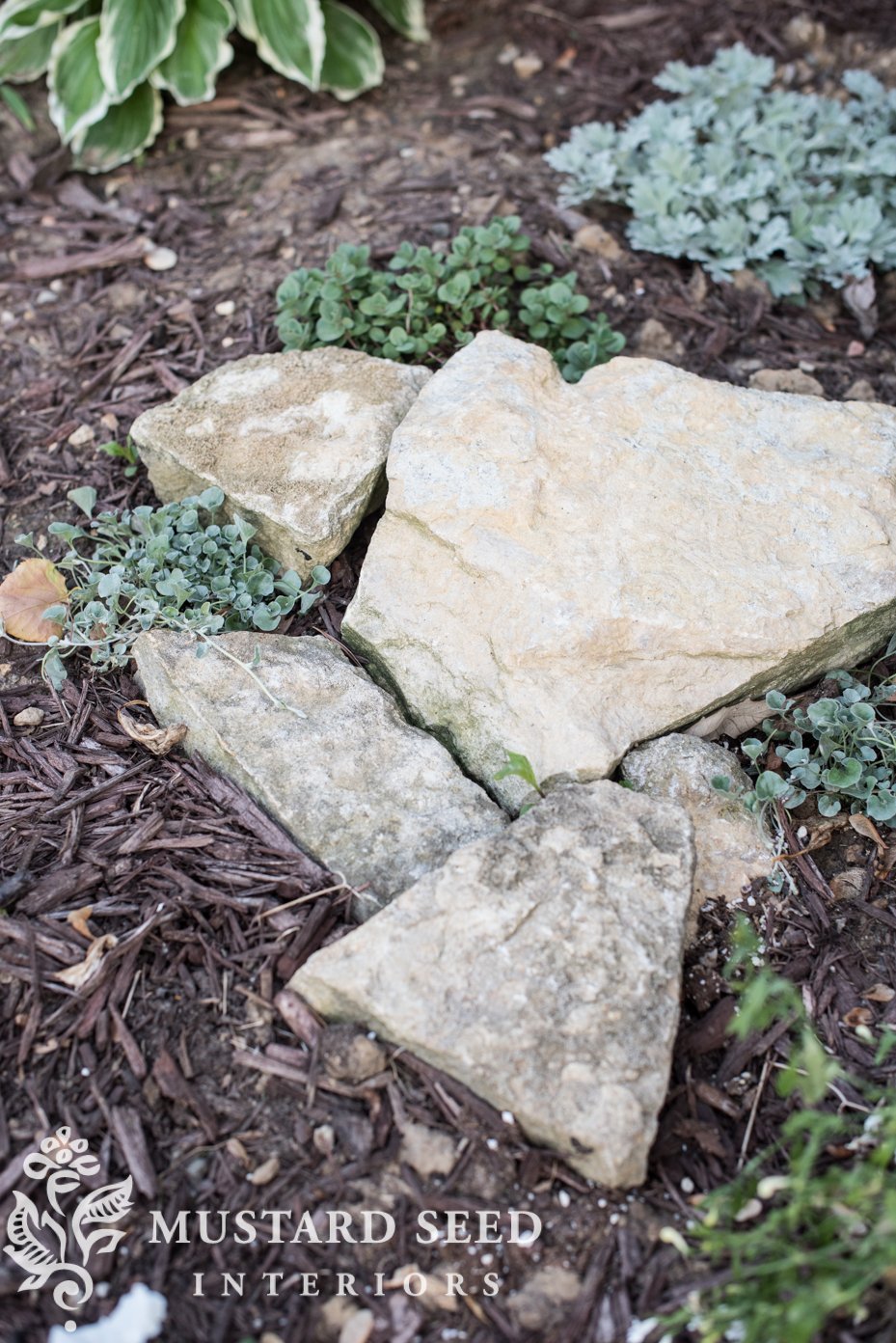 Now, I know this is just about the most boring picture on the internet (well, I’m sure it has competition for that title), but this is another miracle in my eyes.  it’s the sweet autumn clematis sprout!  It looked dead as a doornail, but then I saw a little green shoot popping up and it’s been growing steadily ever since. 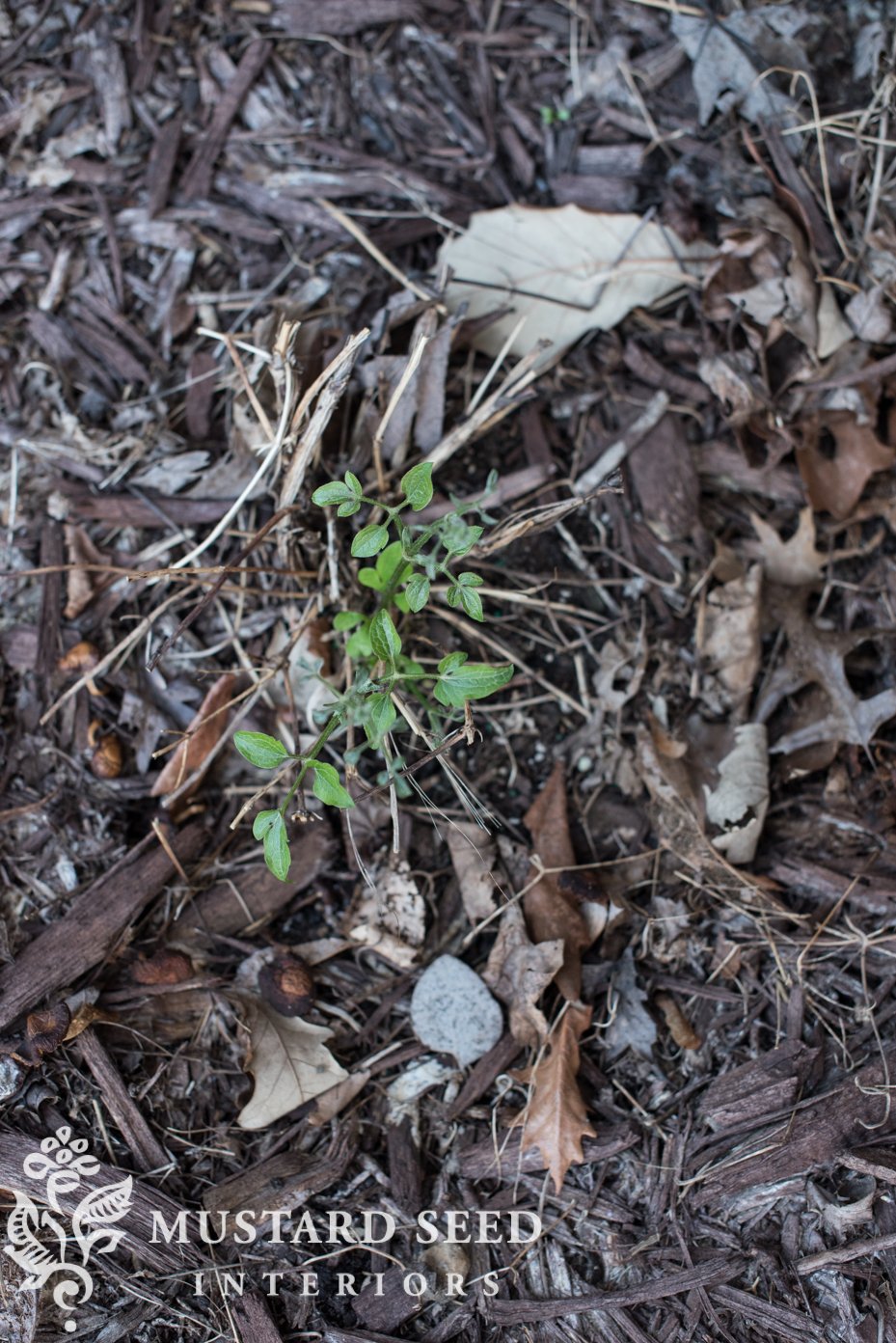 The other one was a couple of weeks behind, but it’s growing as well! 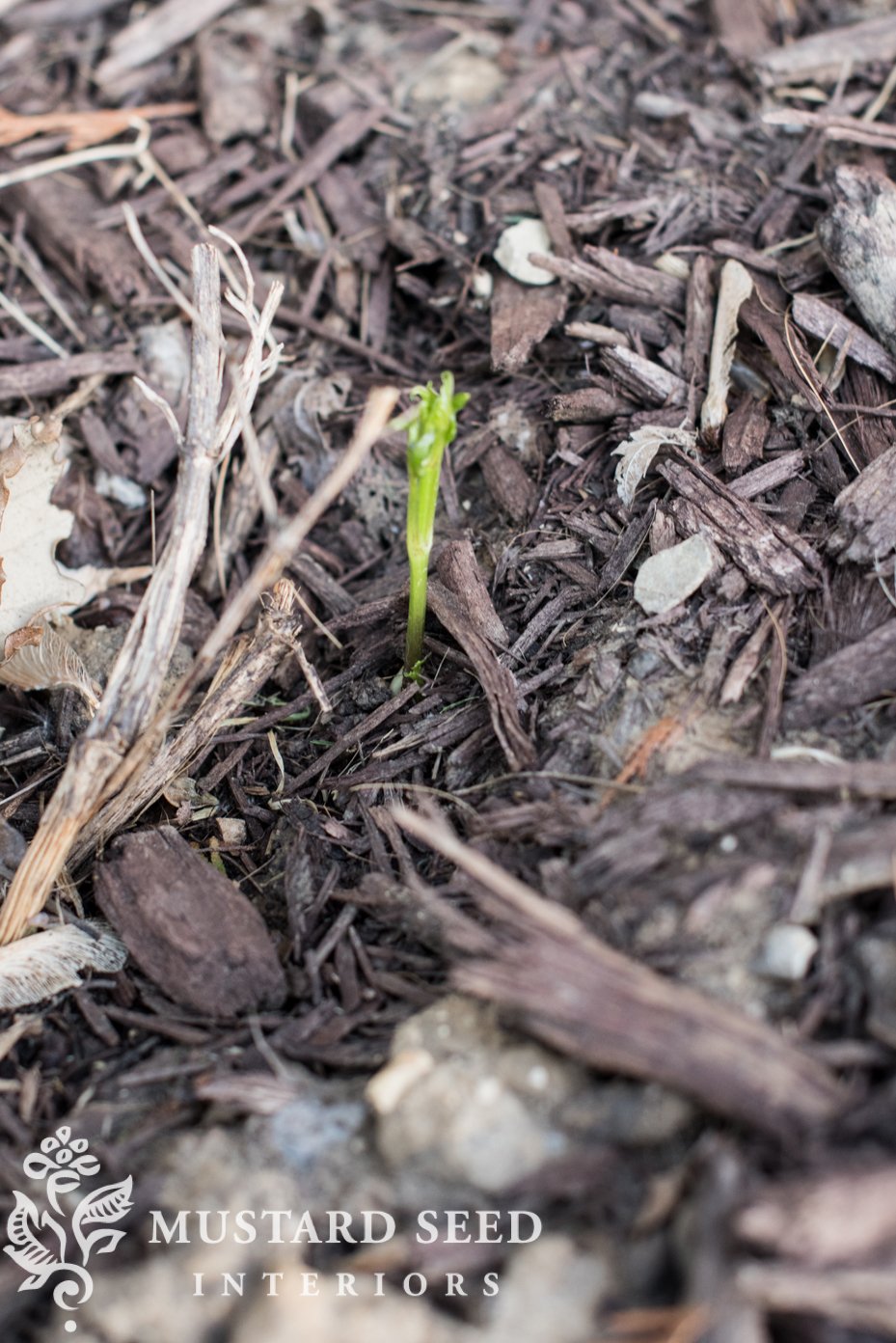 I cannot believe I didn’t take a good picture of it last year when it was in bloom, but here are the pictures I could find… 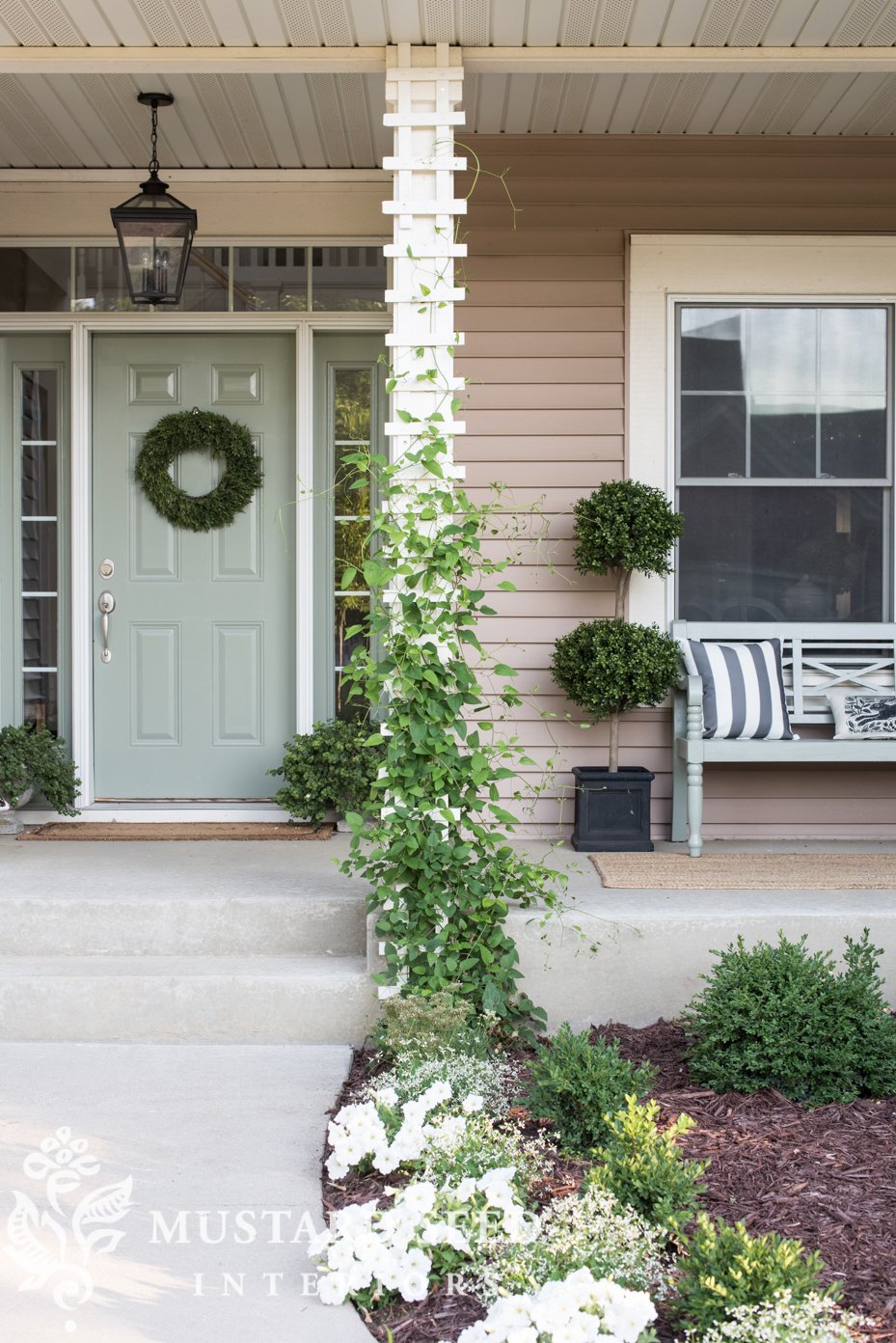 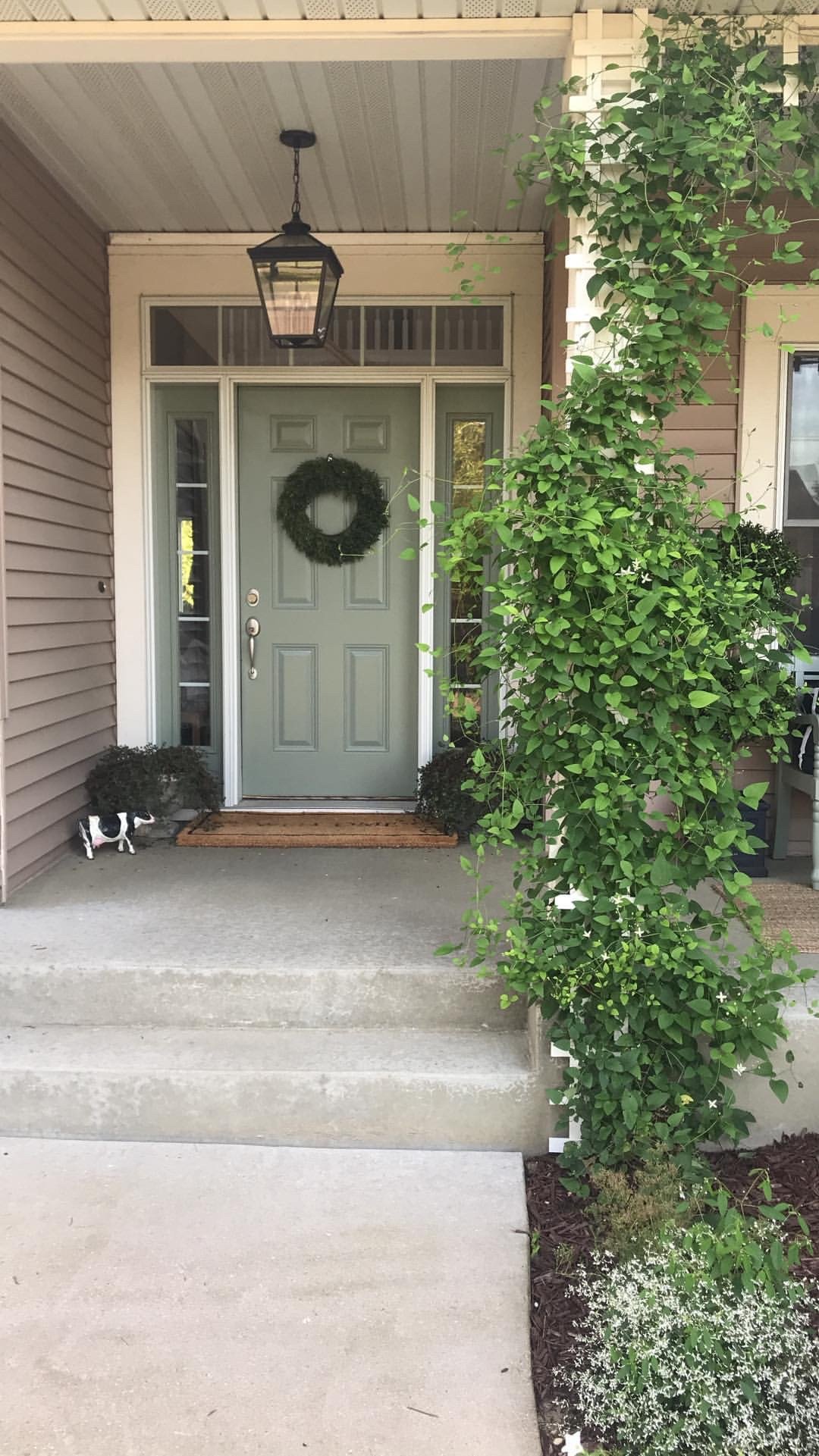 And here is a blurry iPhone photo (with a smudged lens), showing the one on the trellis… 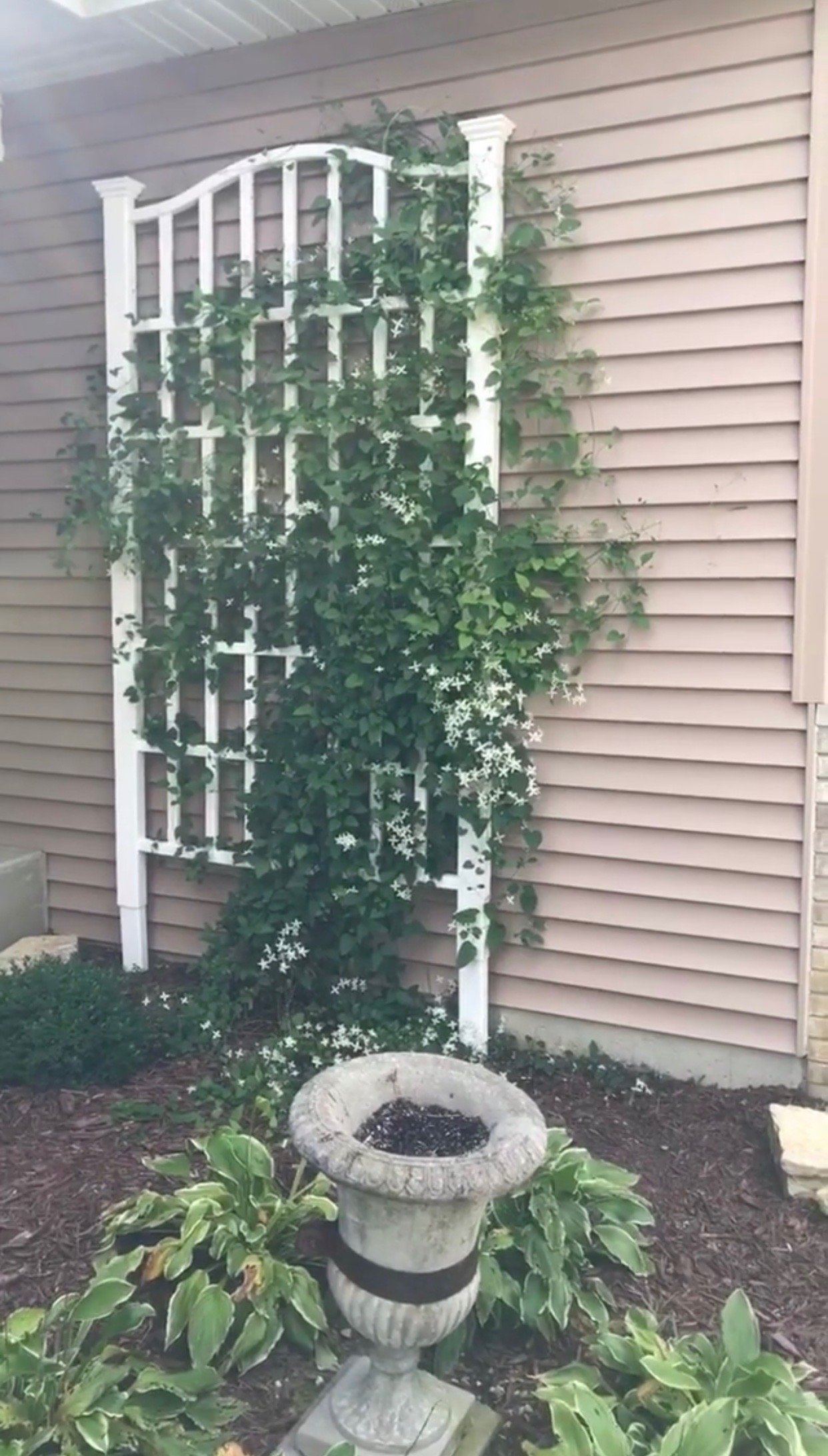 The sweet autumn clematis was my favorite gardening thing ever.  And, I know I’m pronouncing it wrong, but I still think of it as clem-ah-tis, not clem-aa-tis.

Anyway, you can see how much healthier the hostas are this year, too.  I transplanted them last year, so they always looked a little ragged.

I finally went to the garden center yesterday and had two of my big boxwoods replaced.  Well, big-ish.  Initially, I showed them the pictures and they explained that I just needed to trim off the burned parts.  “Yes, I realize that, but then I only have about 1/4 of the bush.  I was hoping you’d replace them.”  And, true to their guarantee, they did.  I’ll get the new ones in the ground in the next day or two and then I’ll add a fresh layer of mulch. 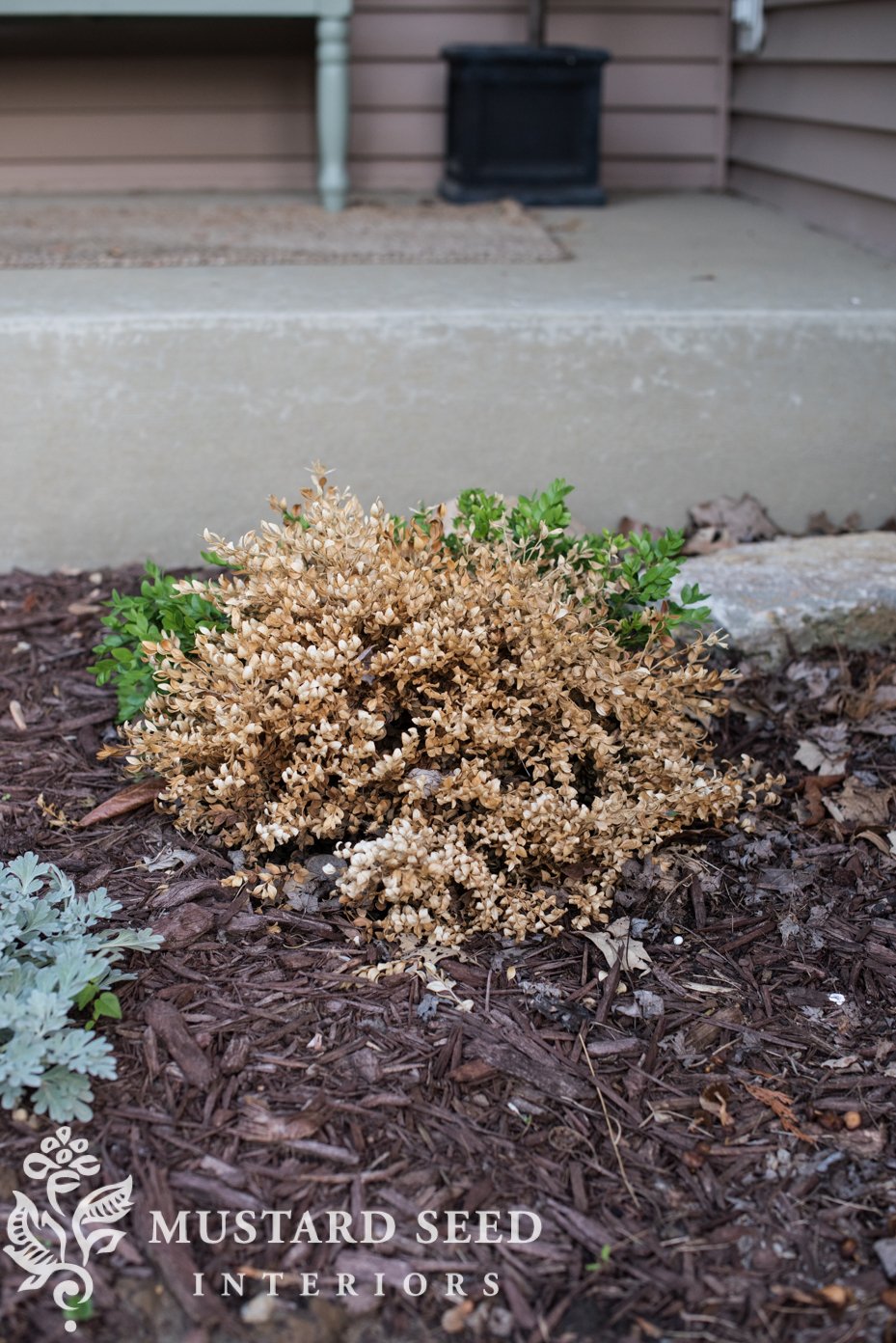 The only boxwoods that did survive were two of the $10 teeny guys from Home Depot.  They are the second two in on this row and they are doing so good.  I feel like a proud mom that they are doing so well despite my ignorance when it came to winterizing.  (Don’t mind the other ones that died.) 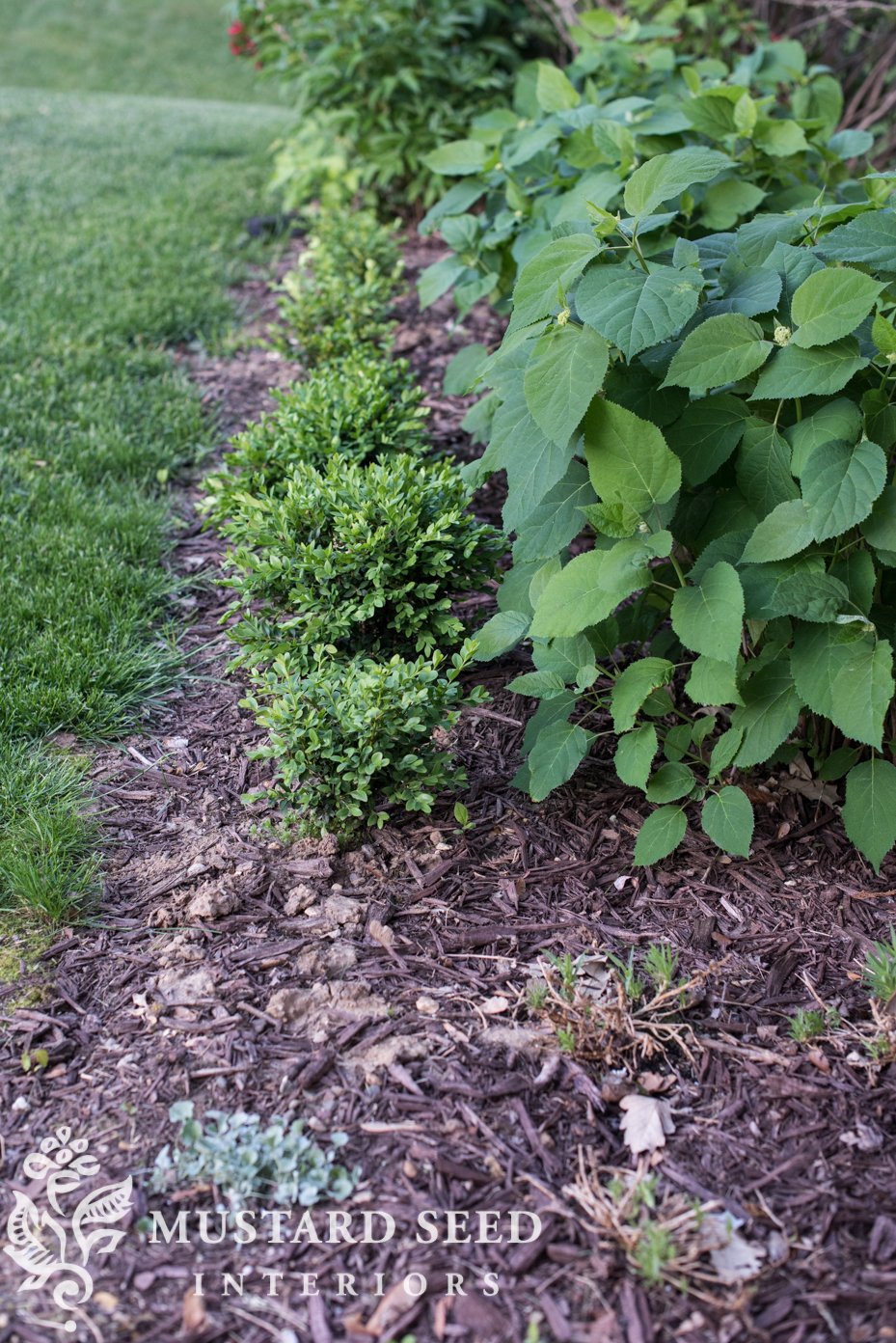 And, the Annabelle hydrangeas have all sorts of buds on them.  I am already looking forward to fall when they start to turn green and I can trim them to dry. 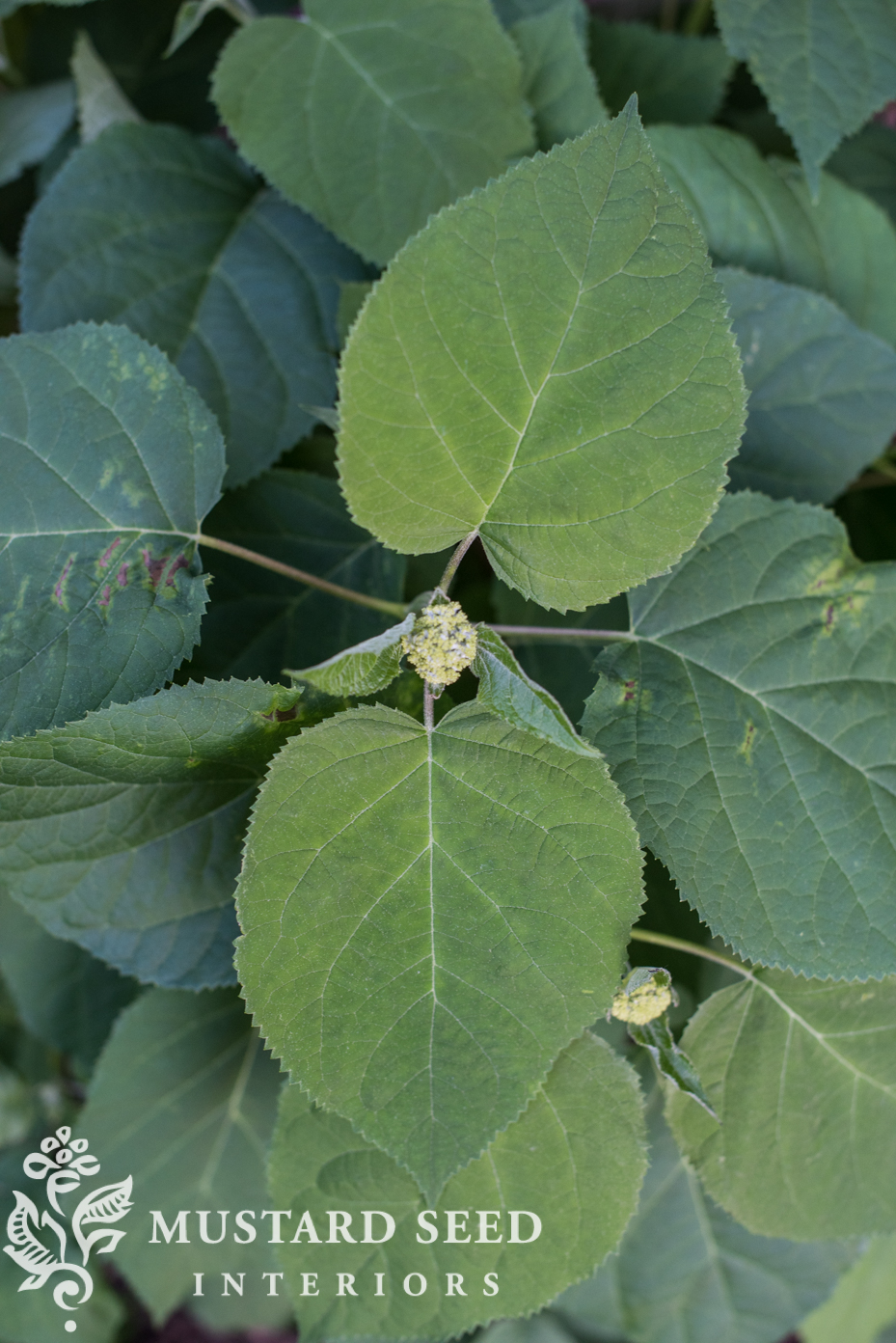 There is still a lot of work left to do on the landscaping around our house.  A lot.  But, I am just chipping away at it here and there.  The back of our house looks like Little Shop of Horrors was let loose on the garden beds (Minnesota has the biggest, meanest, spikiest weeds), but at least it looks like we’re making an effort in the front!

As a recap, here is how the front garden looked last year… 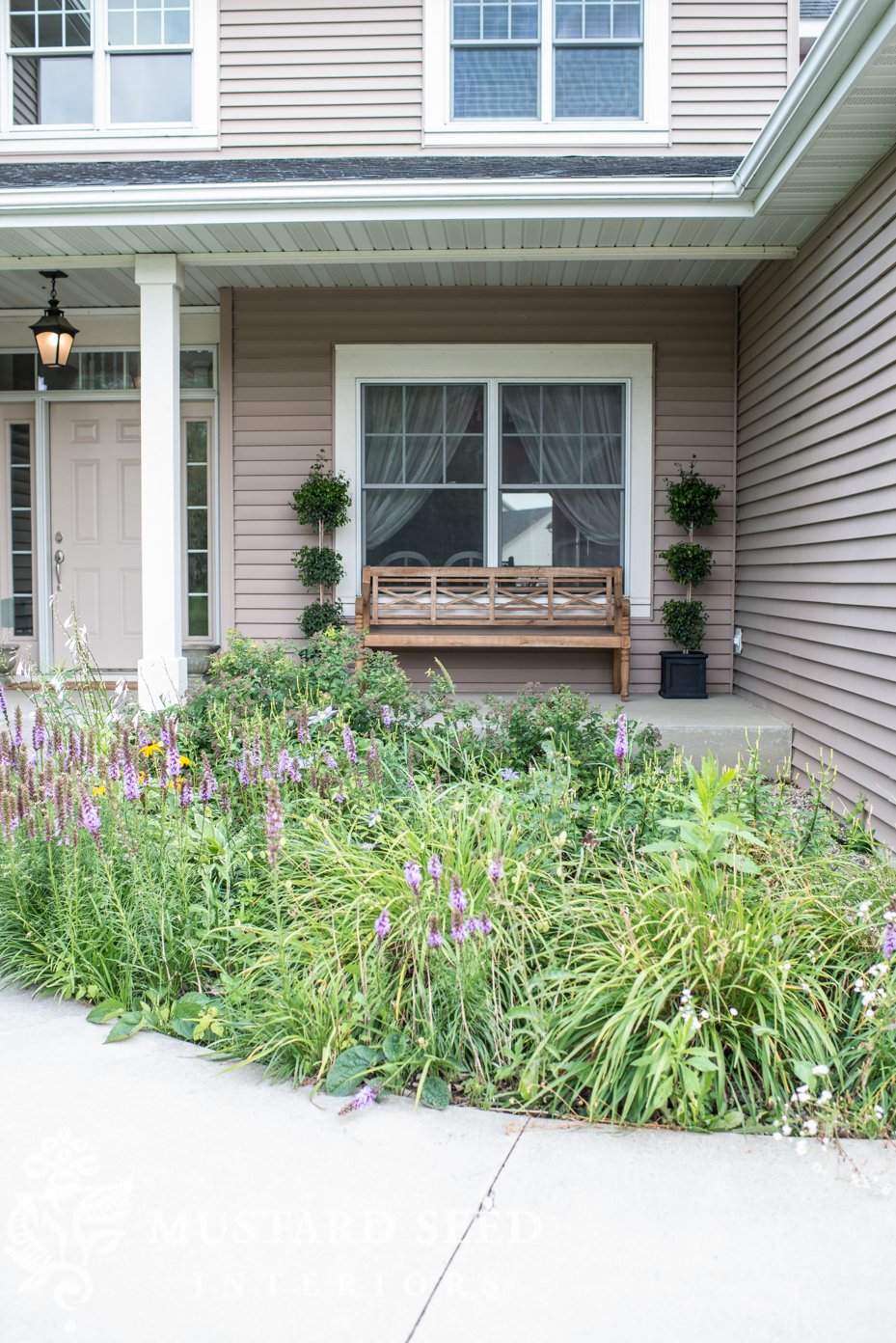 That picture actually makes me laugh.  I’m sure it was pretty at some point, but it just went nuts.

Anyway, it’s sometimes easy to focus on how much still needs to be done, especially when it’s hard work (like pulling out huge bushes and moving wheelbarrow after wheelbarrow of rocks), but these before pictures remind me how much we’ve done.