I am an unashamed soup lover.  I don’t know why anyone would be ashamed of that, but I definitely am not.  I think my love of soup started when we went to a family conference in Switzerland and they served the most wonderful pureed soups.  I had no idea what was in them, but I loved every bowl.  I wish I had the recipes for those!  Anyway, I also love that I can make one big pot of soup over the weekend and we have quick, healthy, and easy dinners ready to reheat.  Today, I’m sharing a new favorite -potato corn soup with dill. 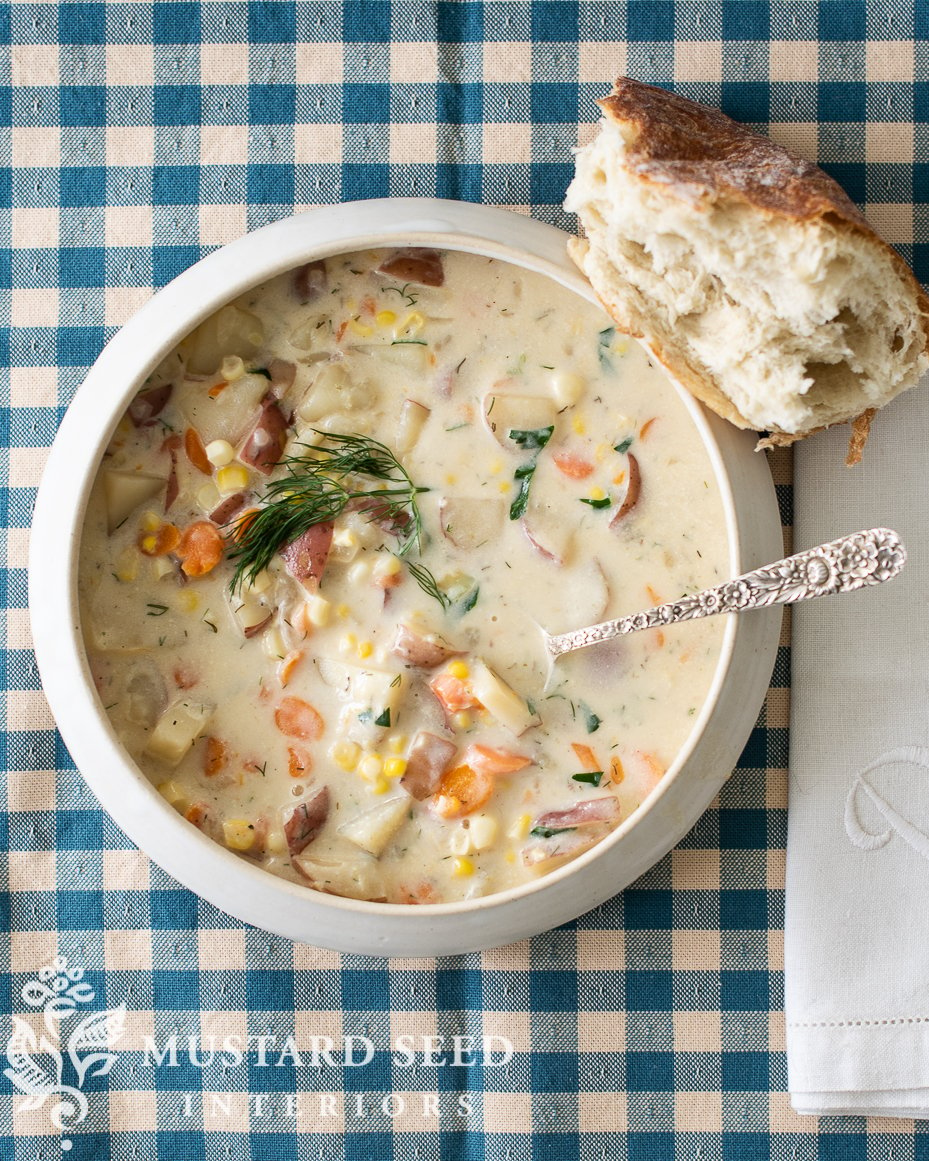 This soup recipe came from a weekly special soup we get from a local market.  Jeff stops into the Food Co-Op pretty regularly just to scope out their soups.  He loves their chicken artichoke soup and clam chowder.  My favorite is the potato corn soup with dill.  It’s a great late-summer, early-fall soup to use up some of the last ears of sweet summer corn.  The thing that really makes this soup is all of the fresh dill, though.  I love garlic dill roasted potatoes, but I never thought to put a bunch of dill in a potato soup.  It is so good, though!

As a note, I tried this potato corn soup with fresh dill and dried dill and the fresh was by far the best.

The full recipe is down below, but it starts with sauteeing carrots, onion, and garlic in butter… 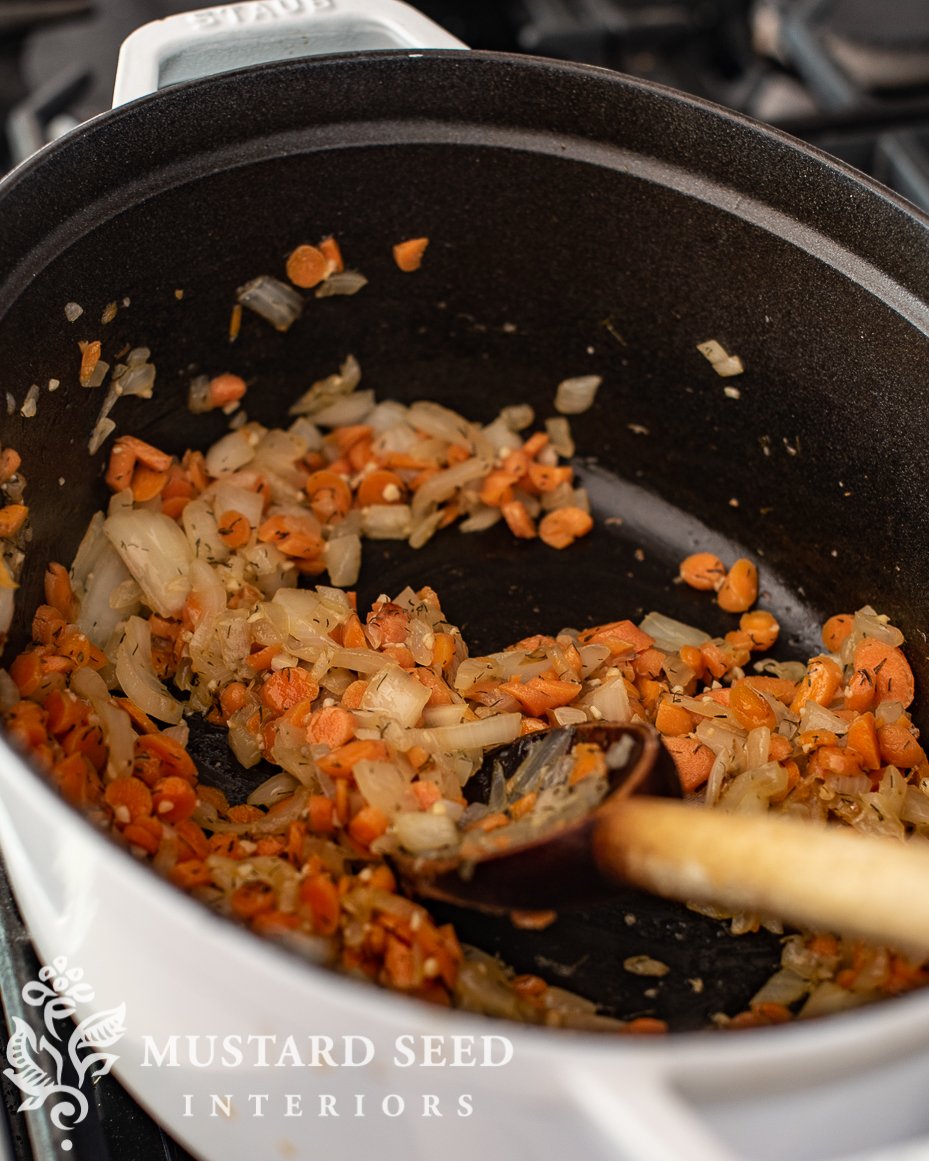 Then add chicken stock and potatoes.  I bring it to a boil, then turn the heat down to simmer, cover, and let the potatoes cook until soft. 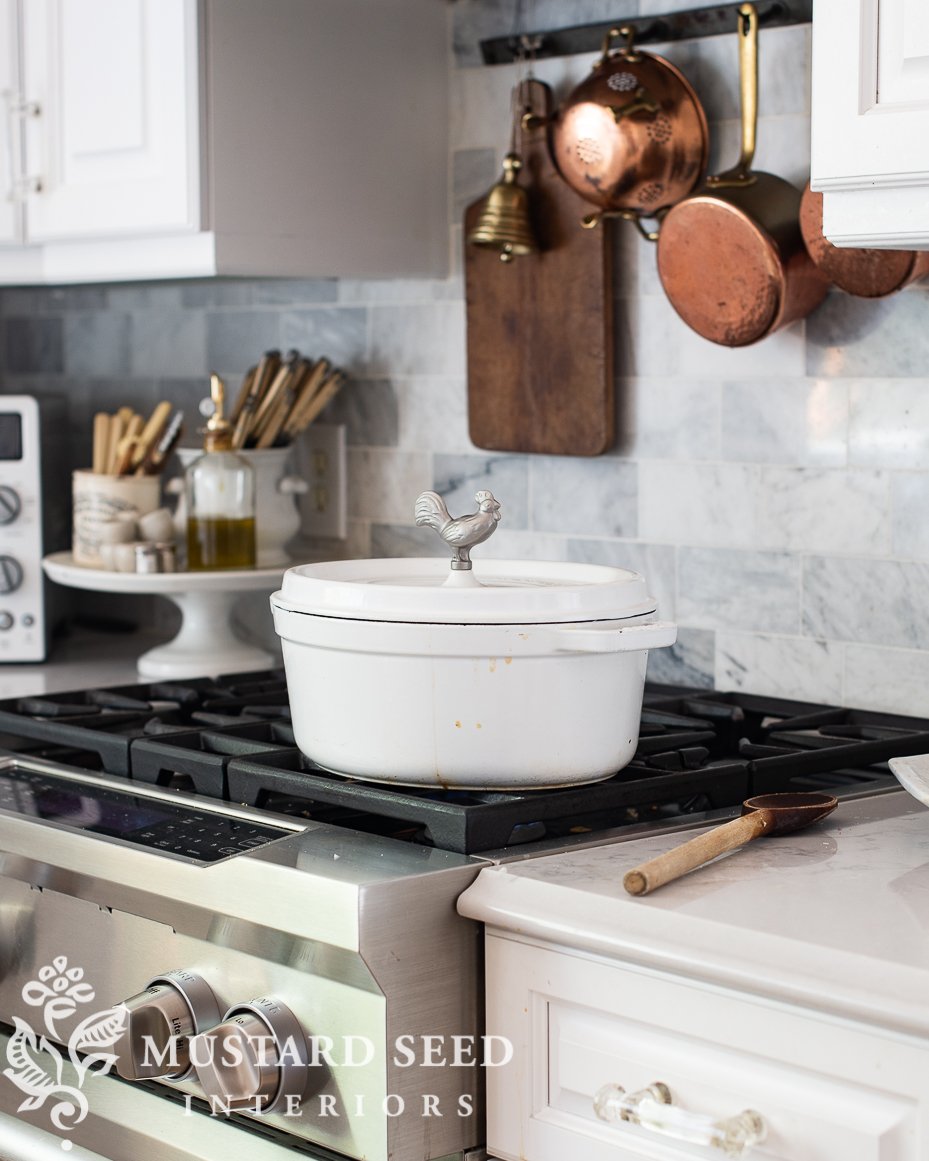 Once the potatoes are fork-tender, I’ll add in the milk/cream/flour mixture, corn, herbs, and a dash of white wine.  I always wait to salt and pepper my soups until the end, so they don’t get too salty if the liquid reduces.

This style of making a creamy soup always looks like a mess when you first add in the cream/milk/flour slurry.  I am usually certain it’s going to be broken, but it all starts to come together and is always creamy and smooth.  The thing I like about this method, as opposed to starting with a roux and just adding milk, is that the chicken broth keeps it a little lighter.  It’s a creamy soup, but it isn’t super heavy.  I tried making this soup with milk and then a milk/cream combo (similar to a half-and-half) and it was good both ways.  It was just a little thinner when I used milk only, which was actually closer in consistency to the Food Co-Op version. 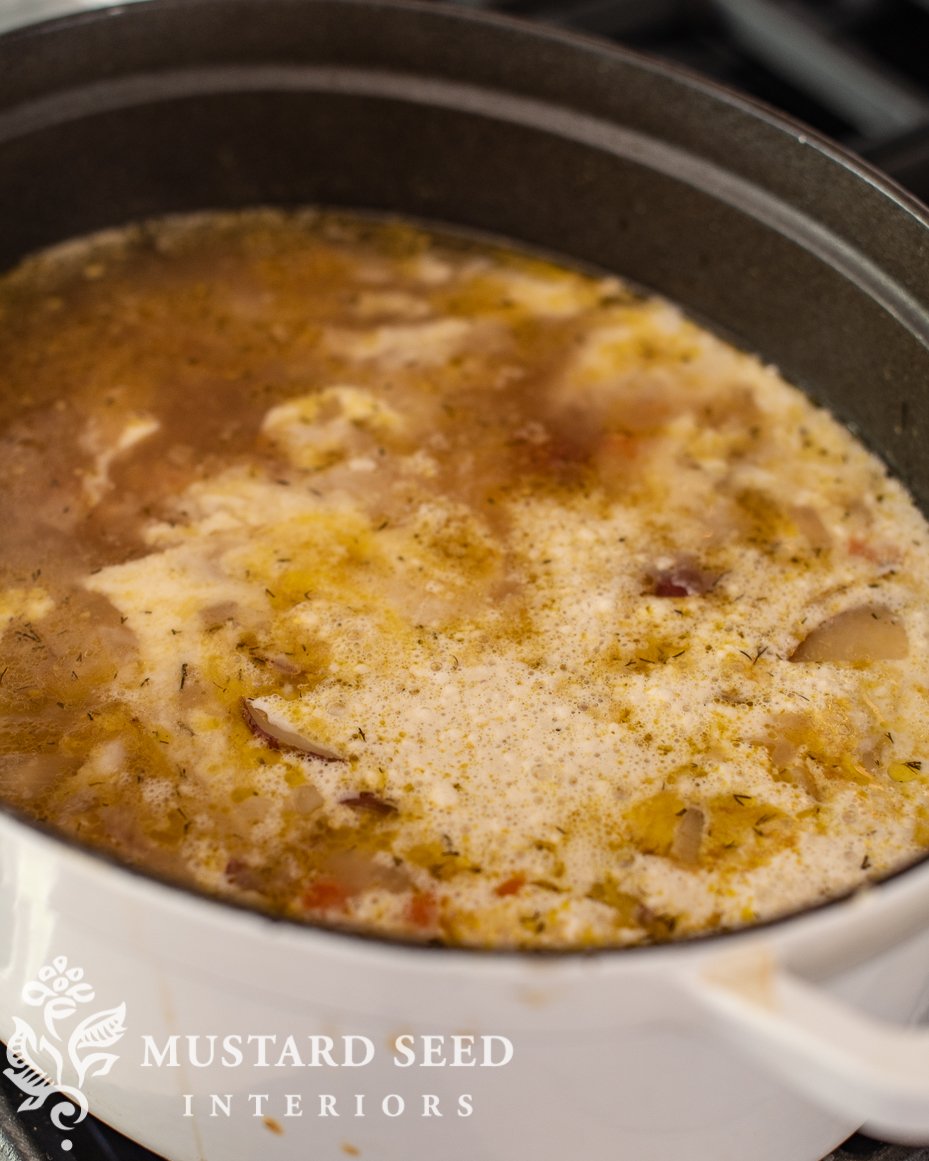 When I served this soup to Marshall, he said that it would just be “eh” if the corn wasn’t in it!  While I think the dill adds a ton of flavor, I agree those little bursts of sweet corn kernels offer a nice surprise. 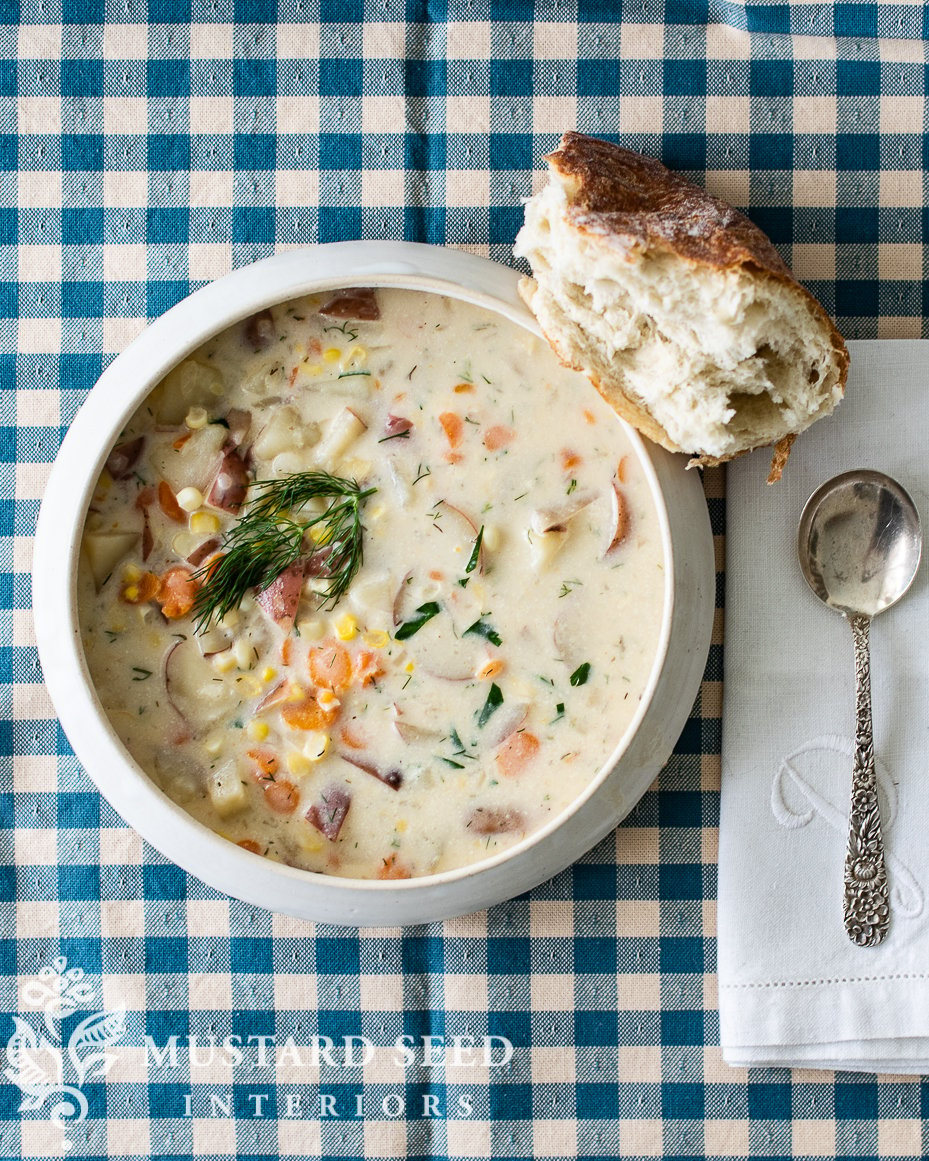 Sometimes, when I make a big pot of soup, I get a little tired of it towards the end.  I’m ready for that soup to be eaten, so I can make a different flavor.  But, right when we got to the last jar of this potato and corn soup with dill, I wanted to make some more.  It’s tasty, filling, and perfect with a little bit of bread, a sandwich, or a salad. 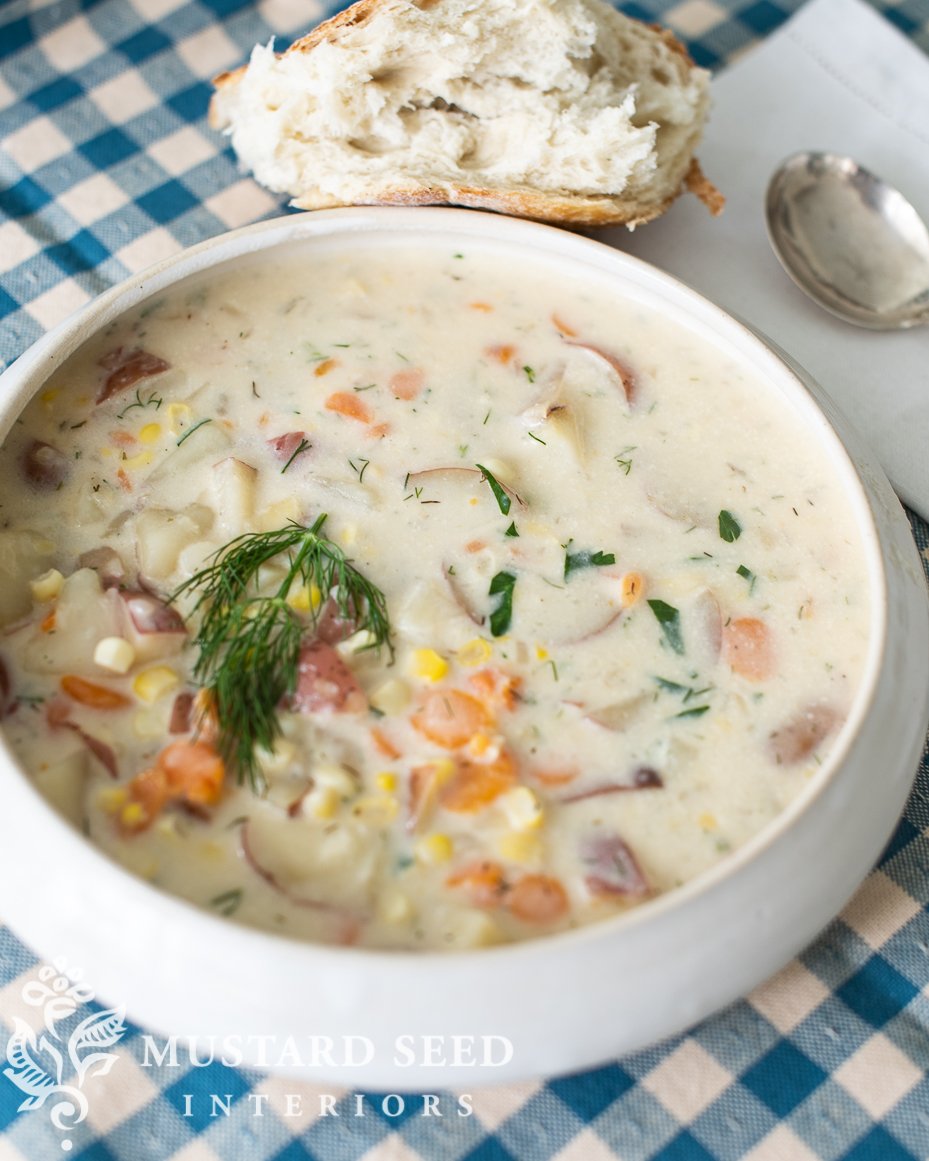 Here is the full recipe if you’re interested in making it!  I usually give myself about an hour to make the soup, so it has time for all of the flavors to mingle.  I hope you enjoy this soup as much as we do!

If you’re looking for more of my favorite soup recipes, you can find them HERE. 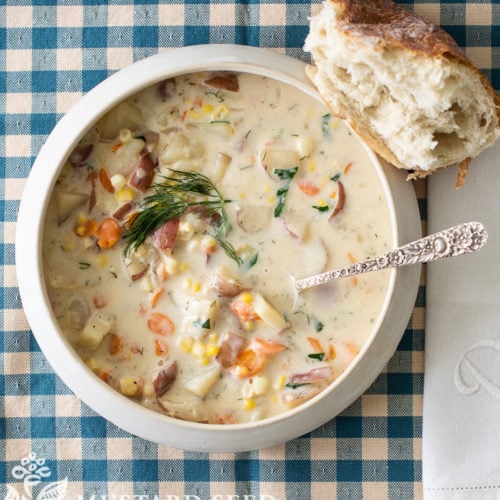