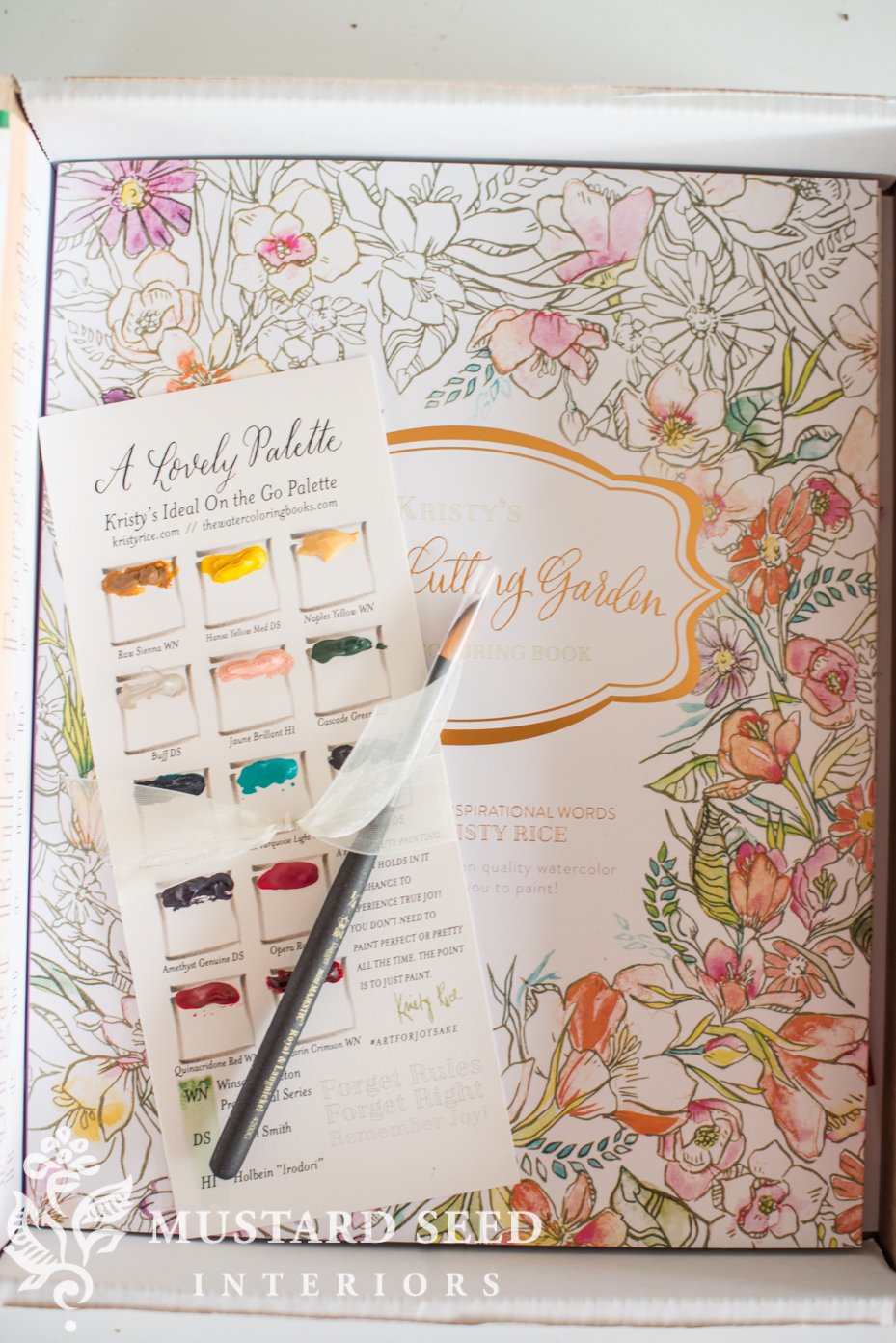 Our deck has always been an afterthought.  There are times when the weather was beautiful and we would sit outside, but we’ve never been “outdoor living” people.  As the boys are getting older and I’m getting more into gardening, we are spending more time outside.  And, aside from a few tweaks and finishing touches, I’m basically finished with the inside of the house, so I’ve been “noticing things” more on the outside.  I’ve really been working on the window boxes in the front and the concrete planters.  I’ve been pruning, weeding, mulching.  We’ve even built up a sunken area on one side of our house and planted hydrangeas and peonies along the side in a mulched garden bed.  The curb appeal of our home is on the rise and it’s making me want to do more.

We’ve already been doing a bit of work to the deck.  Jeff has wanted to cut the front railing off the deck for years, but I always held him back.  I finally caught his vision for it and gave him the go-ahead.  Here’s how it looked before… 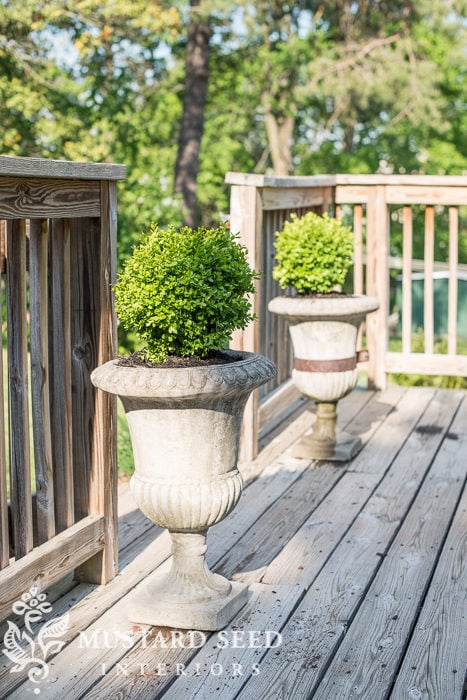 Now, without that rail, that wasn’t necessary for safety, it’s so much more open. 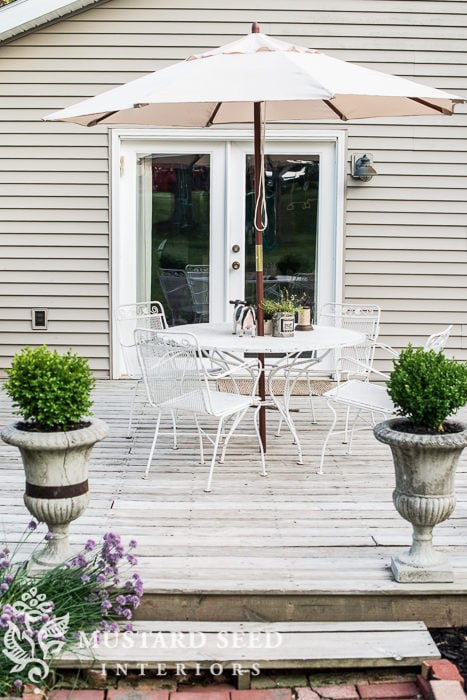 I found the vintage iron patio set at Lucketts and we have used it a lot already.  We eat outside anytime the weather is nice and sometimes I’ll just sit out there and watch the boys play.  It was a great purchase.  Since we don’t have any shade or covering, I picked up the umbrella from credits I had with Joss & Main.

(I originally bought a lime green one, thinking it would just blend in with the green of the trees, but it was woah-lime from the inside of the house and just wasn’t working for me.  I reevaluated and decided to approach decorating the outside of the house the same way I do the inside…antiques, neutrals, blues, whites and natural elements.

I picked up an antique wash stand a few weeks ago and decided it was perfect to use on the deck.  I even found a really neat wash basin to put on top of it.  Jeff’s going to drill holes in the bottom and I’m going to plant some herbs and lettuce in it. 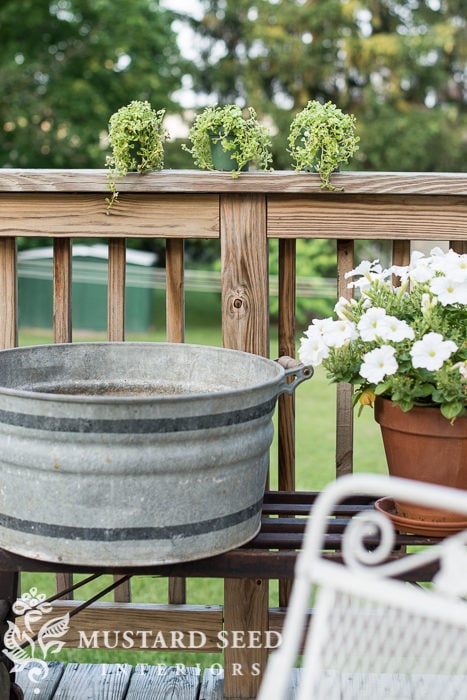 I have a pair of vintage iron arm chairs that my mom passed along to me, but the cushions are a little past their prime. 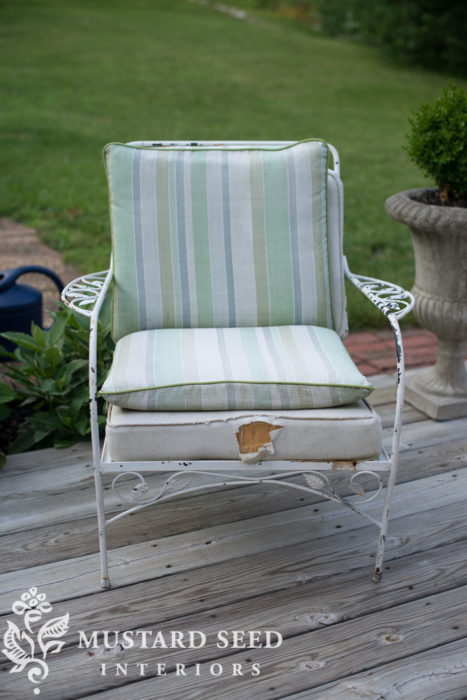 Okay, a lot past their prime.  They are still “sit-able”, but they look tired and are mildewing between the cushions and obviously have some tears in the fabric.  Sailrite is sending me some new foam and fabric, so I can make new cushions for the pair.  I’ll make a tutorial as I work on those.

I also partnered with Pine Cone Hill and Dash & Albert again on a outdoor rug, pillows and a poof to add some softness and color to the space.  I’ve always liked the idea of a rug, but was concerned about one holding up to the elements.  The D&A rug I picked out can be bleached and washed with a hose so it’s fine to leave on an uncovered deck.

I’ve always been stumped with what to do with this blank wall between the glass doors and the window.  Now, I envision a potting bench.  I’m not sure what it’ll be exactly, but I’m thinking a metal rack/shelf or perhaps an old hutch that’s already been exposed to the elements or maybe I’ll sweet-talk Jeff or my dad into making something for me. 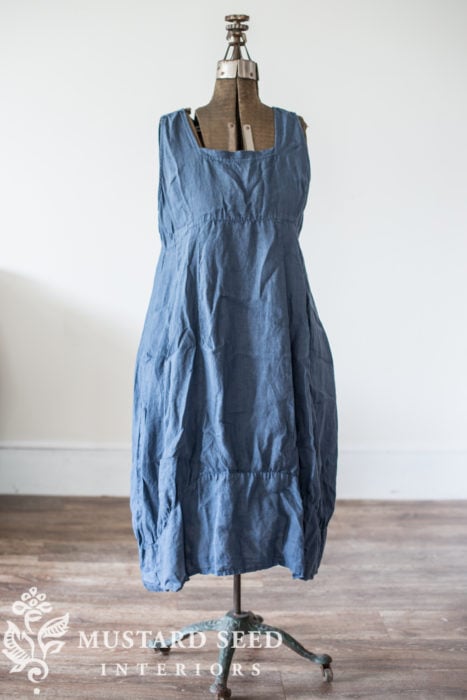 And, of course, I’ll be cleaning things up a bit, putting the old table on Craig’s List, getting a new light fixture, maybe flank the glass doors with some planters, etc.

I’m really looking forward to creating an outdoor space that’s inviting and a real extension of the the rest of our home, but something that’s not too high maintenance.

Since I’m new at this outdoor/garden stuff, any tips from the veterans?

painting the other side of the studio floor…

26 Comments on “plan for the deck”