As I shared in THIS POST, I visited a pen & paper shop mentioned in the book A Paris Year on our first day in the hopes of finding a fountain pen.  While the shop was charming, it wasn’t what I was expecting and they didn’t carry what I was looking for.  I knew from walking around last year that there were tons of pen & paper stores in Paris and I just had to find the right one.

I looked up fountain pen shops in Paris online and found an article on Fountain Pen Love sharing a list of John’s top 10 shops.  The description of Mora Stylos caught my attention, specifically because they carried vintage and used pens.  It wasn’t too far from the Marais district, so we decided to walk in that direction after our tour and lunch.

John and Wendy hung around outside of the shop while my mom and I went in to find my fountain pen.  I smiled at the man behind the counter and said “Bonjour!” and he replied.  I leaned in to get a closer look at the rows of pens under the glass cases.   They were all different and I could only see tags for about half of the pens.  The tags I saw did not fill me with hope that I would walk out of this shop with a pen.  We’re talking 800-1200€ pricetags.  I felt like they probably had something in my price range, but I was going to need help finding it.

I turned to the man behind the counter and asked if he spoke English.  He just shook his head and answered, “No.”  He didn’t smile or show any willingness to try to communicate and help me purchase a pen.  I looked at the contents of the cases for a few more silent minutes.  I felt completely out of my depth.  Disappointed, I thanked the man, turned around, and left the shop.

Wendy saw that I came out of the shop empty-handed.  I explained the situation and, since she is fluent in French, she offered to translate.  At first, I declined and took a few steps away from the shop.  I waffled.  I must admit that a wave of embarrassment came over me at the thought of walking back into the shop, but another part of me thought this might be my best chance to find “my pen.”

I took her up on her offer and we walked back into the shop.  Let’s try a little humor on the staunch man behind the counter.

“Tell him that I just needed to get someone who spoke French.”  Wendy relayed the message and he cracked the faintest hint of a smile.  Wendy let him know I was looking for a vintage/antique pen that was less than 150€.  The shopkeeper made a general arm motion towards the counter to the left of us.  I leaned down and looked at the rows of pens again.  Nope, still not seeing my pen.

I asked Wendy, “Can he show me the pens that fit that description?”

Once she relayed the request, he nodded and started selecting pens, setting them on a black velvet pad on the counter.  Now we’re in business. 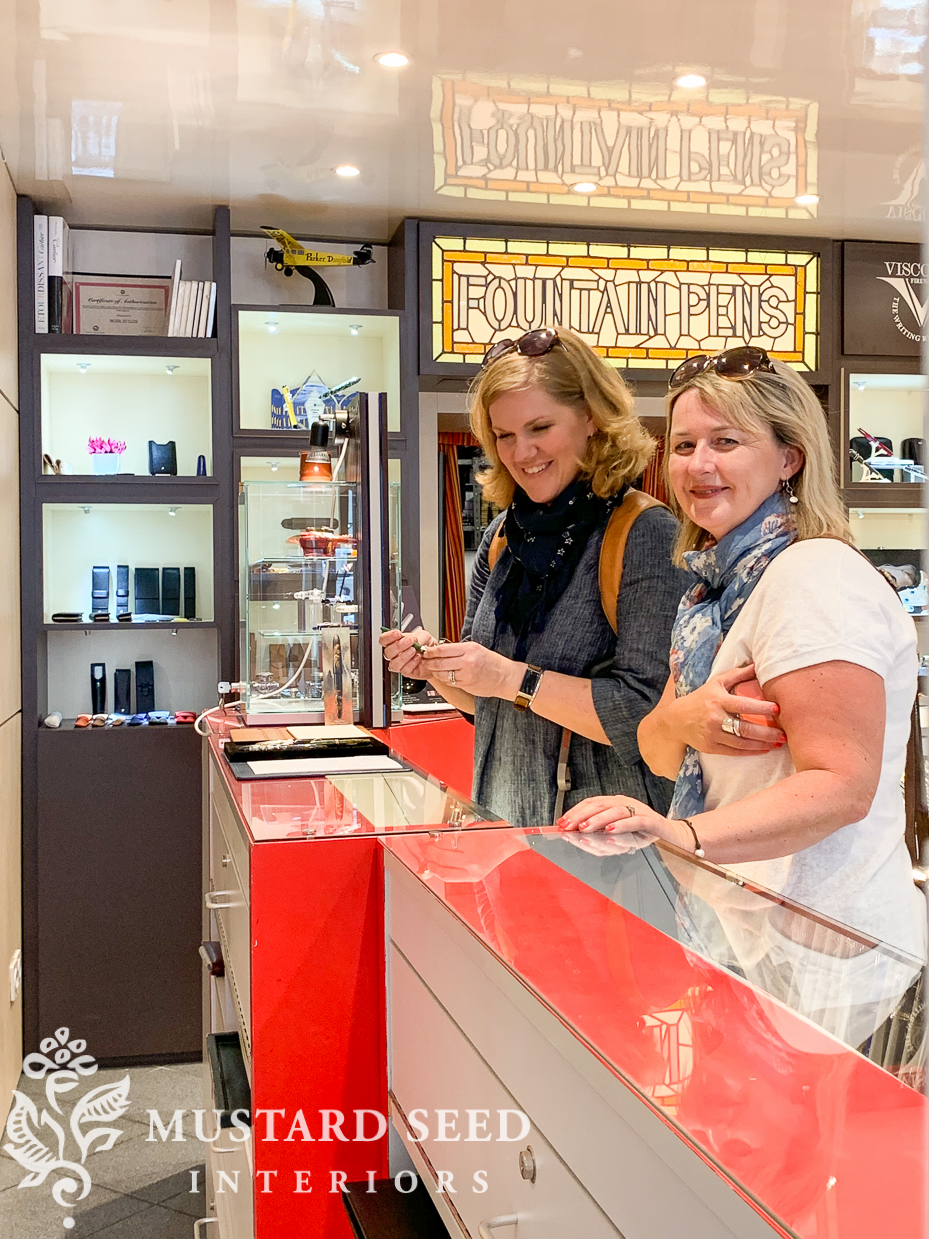 He put a few pens on the counter that were okay, but nothing I was excited about.  He then brought up a green pen with gold details.  Ooooo…I like this one.  He followed it up with an identical pen in a tortoiseshell pattern that I also really liked.  “How old are these pens?”  The gentleman answered, “1920s.”

“You do speak English!”

He told Wendy in French that he’s just not very confident speaking English, but from that point on, he answered my questions directly and only needed an occasional translation.  He also warmed up, recognizing my excitement over the pens he selected for me. 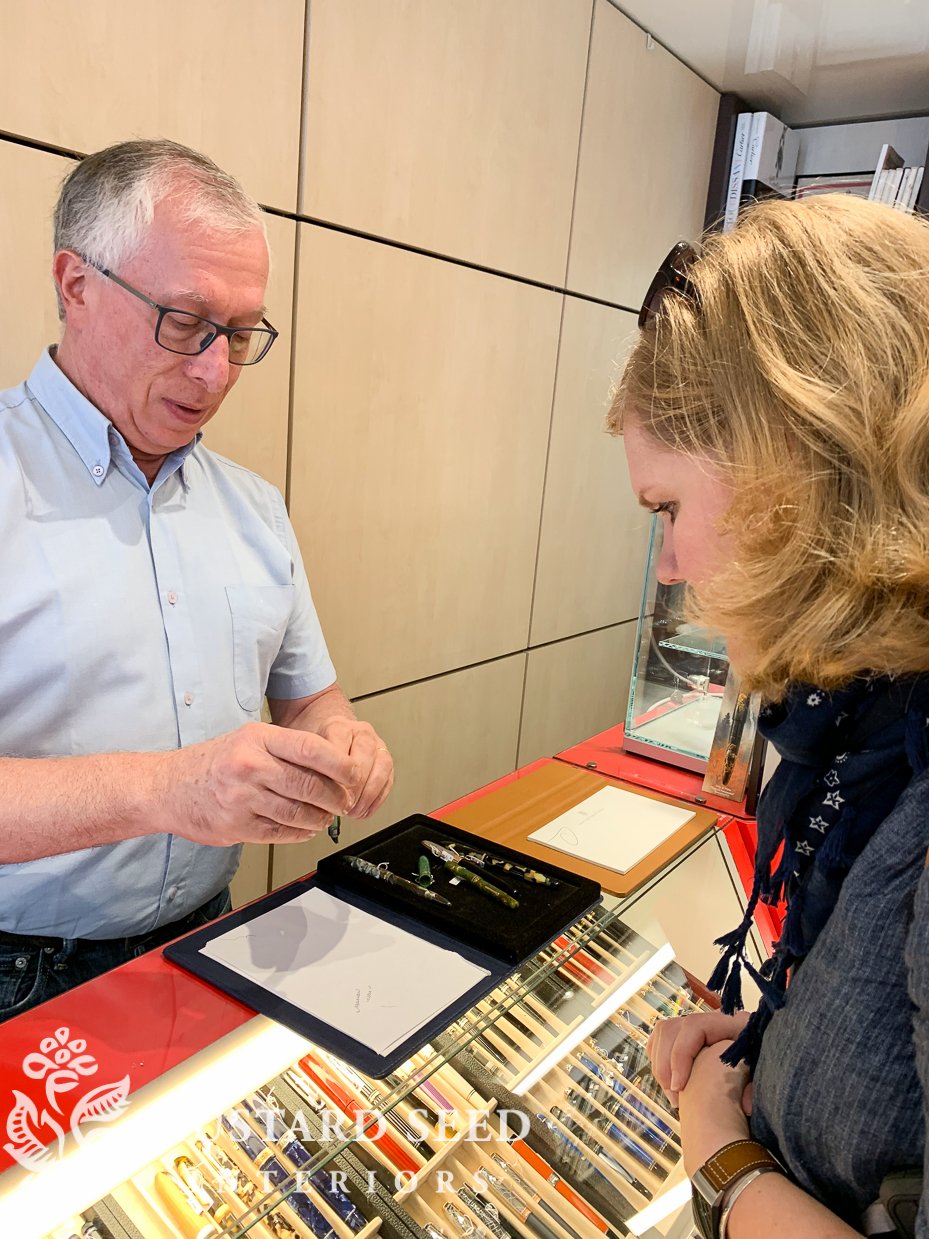 I decided to try writing with the green pen, since that was the one I was drawn to the most.  He pulled out a pad of paper and a bottle of ink.  He dipped in the pen to fill the nib and handed it to me.  I wrote a few words and made a few scribbles and loved the fine gold nib and the feel of the pen.

“This is my pen, but you have to show me how to fill it!”  Another reserved smile appeared on his face and he agreed.  It was a pump-style fountain pen, which I wasn’t familiar with.  The pen has a gold lever on the side that is used to draw ink into the pen.  He showed me how it worked and, comfortable that I understood, he cleaned the nib, packaged my pen for me, and included a little glass bottle of black ink.

“Is this pen from France?”

We all laughed.  I traveled to Paris to buy a vintage American pen.  Sometimes you have to travel a few thousand miles to find things that were meant to be yours. 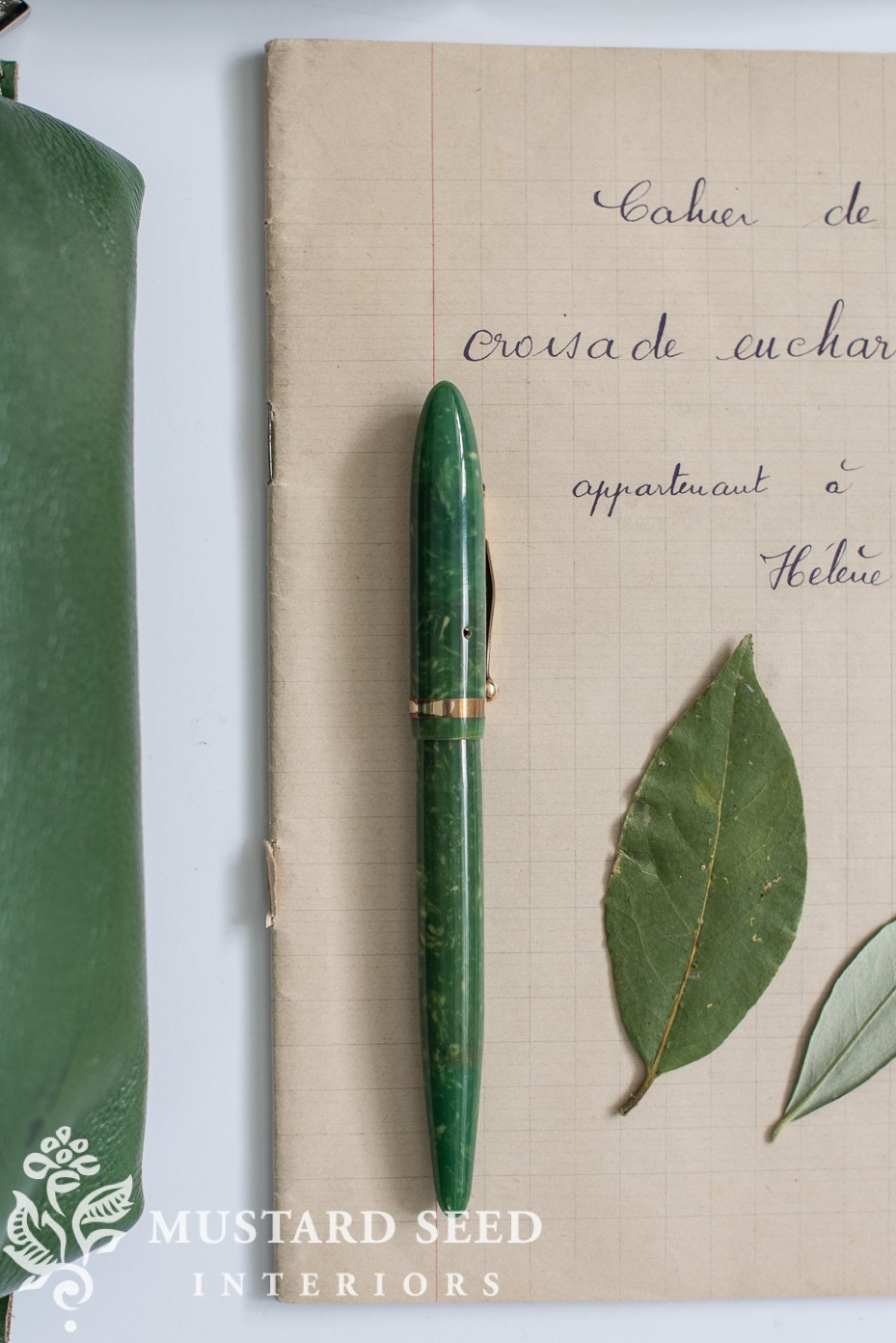 And I love the pen.  It’s one of my favorite purchases from my trip. 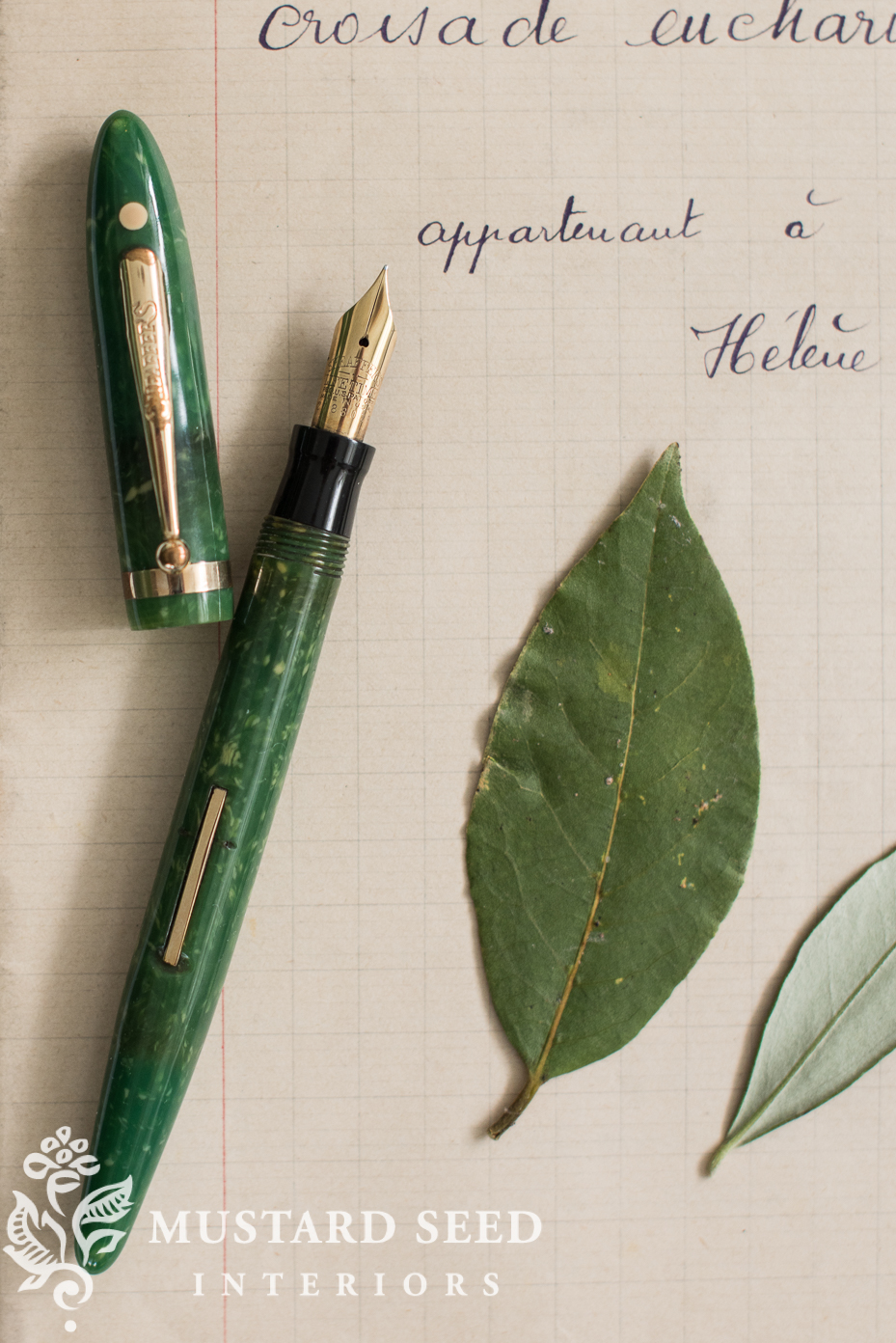 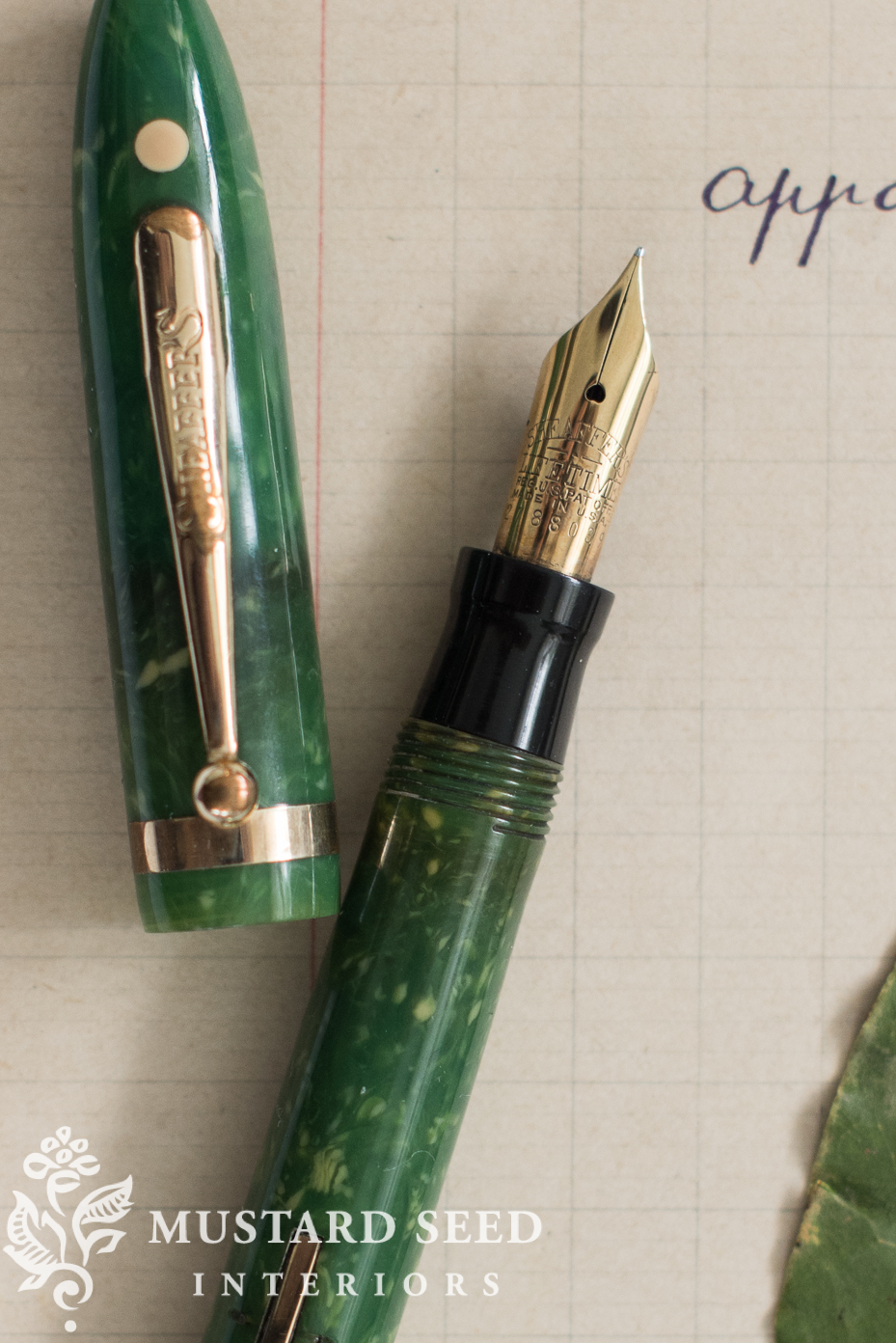 I loved the process of filling up the pen.  You open the lever, stick it into the ink, close the lever, and the pen sucks up the ink.  You can even hear the slurp! 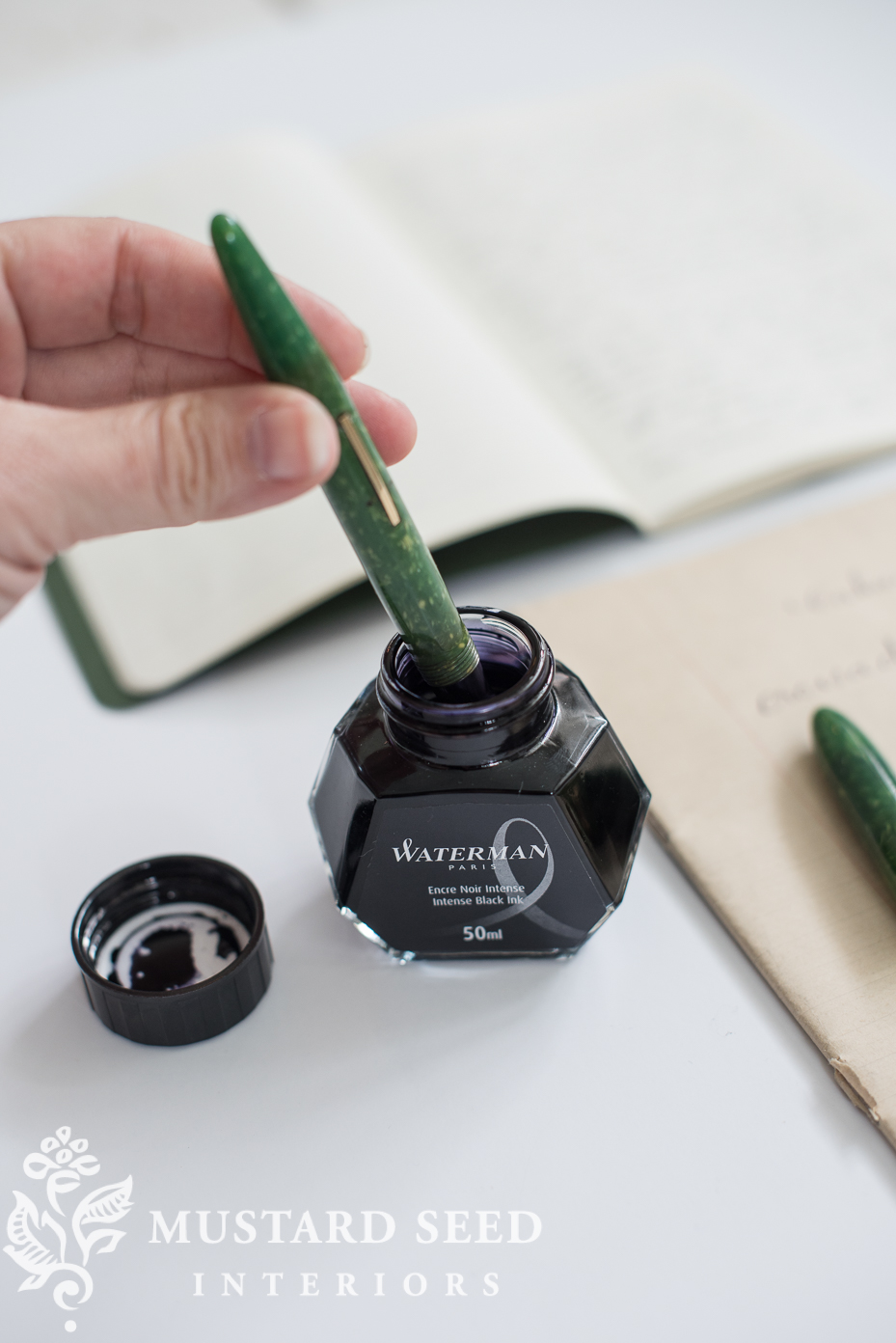 I wrote out a few lines and it was just as wonderful as it was in the shop. 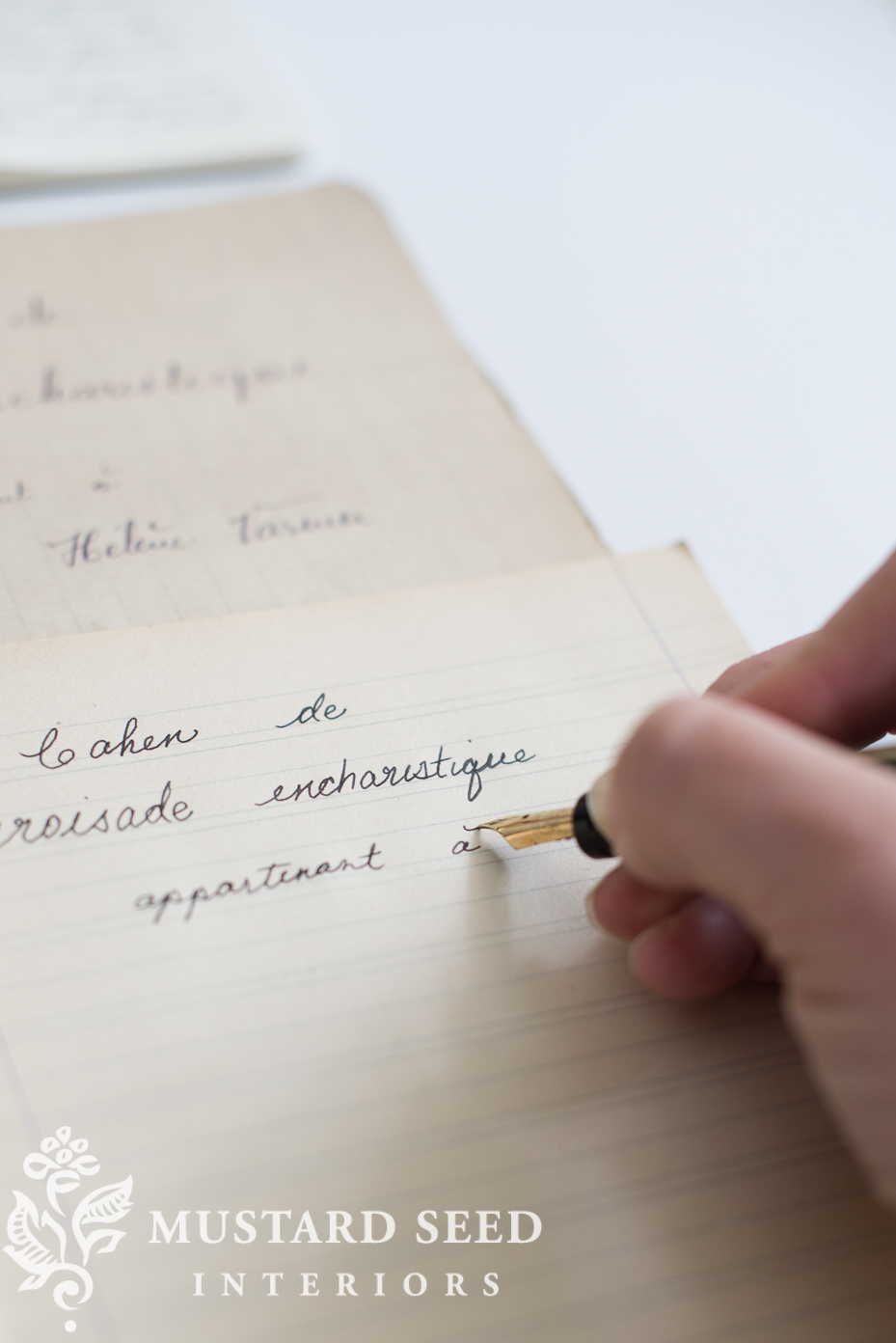 Buying a fountain pen got off to a bumpy start, but I’m so glad I took up Wendy’s offer to go back into the shop and translate.

I ended up with a special souvenir from Paris. 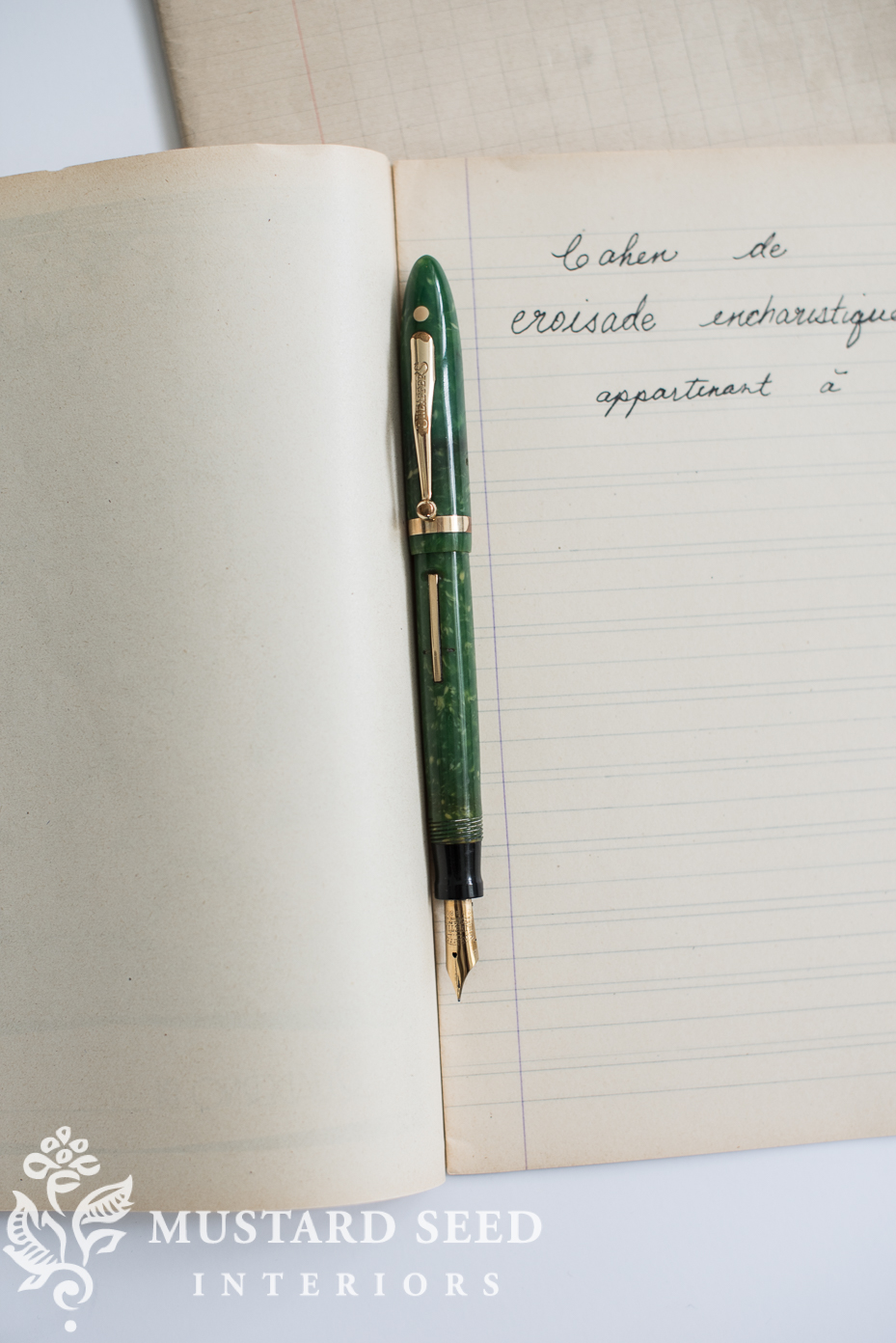