When we first started our home renovation projects, I felt like we had more than enough saved and dedicated to comfortably do all of the projects we wanted.  As I’m sure many of you have experienced in the past, that money can go a lot quicker than you expect.  Some projects have come in delightfully under our expectations, but the ones that have been over have been way over.  The floors cost about double what we anticipated.  And the roof, which we weren’t planning on doing for a few more years, came in about 30% higher than what we expected.  All of the little projects, materials, and required tools have also added up.  We’re not renovation newbies, but we haven’t tried to tackle so many things in such a short period of time.  We typically do one or two large projects and then mix in smaller ones we can do ourselves.  But, we’re taking it step-by-step, setting priorities, making compromises, and pushing some projects back a while.

Sometimes limitations can be frustrating, but they can also force you to come up with creative solutions, to thoroughly shop around and do your research, and to focus on what’s really best for the house and your family.  It forces focus, which is always a good thing.  I have found myself feeling pushed and stretched in new ways.

All of this is to preface the story of our new bedroom windows and how budget constraints led to a wonderful, cost-saving outcome.  The 50-year-old windows in this house aren’t terrible, but some were definitely in better shape than others.  They are an old model of Andersen windows, which means they are quality, but they are also solid wood, which means they are susceptible to moisture, and termites, and need to be repainted every so often.  Many of our windows were gummed up with old paint and were in need of sanding, priming, and painting, so we wanted to look into the cost of replacing them.

As a side note, I know replacing old/older windows can be a bit controversial.  While these are vintage windows, they are not anything I feel passionate about keeping and restoring.    If they were 100-year-old windows with wavy glass, then I would fight to keep them.  What I care about in the case of replacing these windows is that we stay true to the style with 8-over-8 divided panes.  The current windows have removable plastic mullions.  I like the look of them, but the fact that they are plastic, removable, and only on the inside makes me a little less enthusiastic about them.

So, when I was in a local hardware store to pick up some materials, I stopped by the window department to request a quote.  They sent a representative out to my house later that week and he worked around the house, measuring tape in hand, making notes, and was ready to present an estimate to me.  He really should’ve said something like, “You might want to sit down for this.” or, “Please don’t laugh at me when I tell you the total.”, but with a straight face, he informed me it would cost over $40,000 to replace 17 windows in our house.  He also pointed out all of the discounts and savings I was getting and just about handed me a pen to sign on the dotted line.

I couldn’t tell you what the expression on my face was, but internally, I was torn between laughing and crying.  That was more than our floors, more than a new roof (a roof), more than replastering, retiling, and reequipping an entire pool, and more than our entire kitchen renovation estimate (which includes moving a staircase.)  It was more than both of our cars put together.  It was way, way, way more than I was expecting and that’s finally what I sputtered out.  “Well, that’s too much for us to do all at once.  What about just the front bedroom windows?” 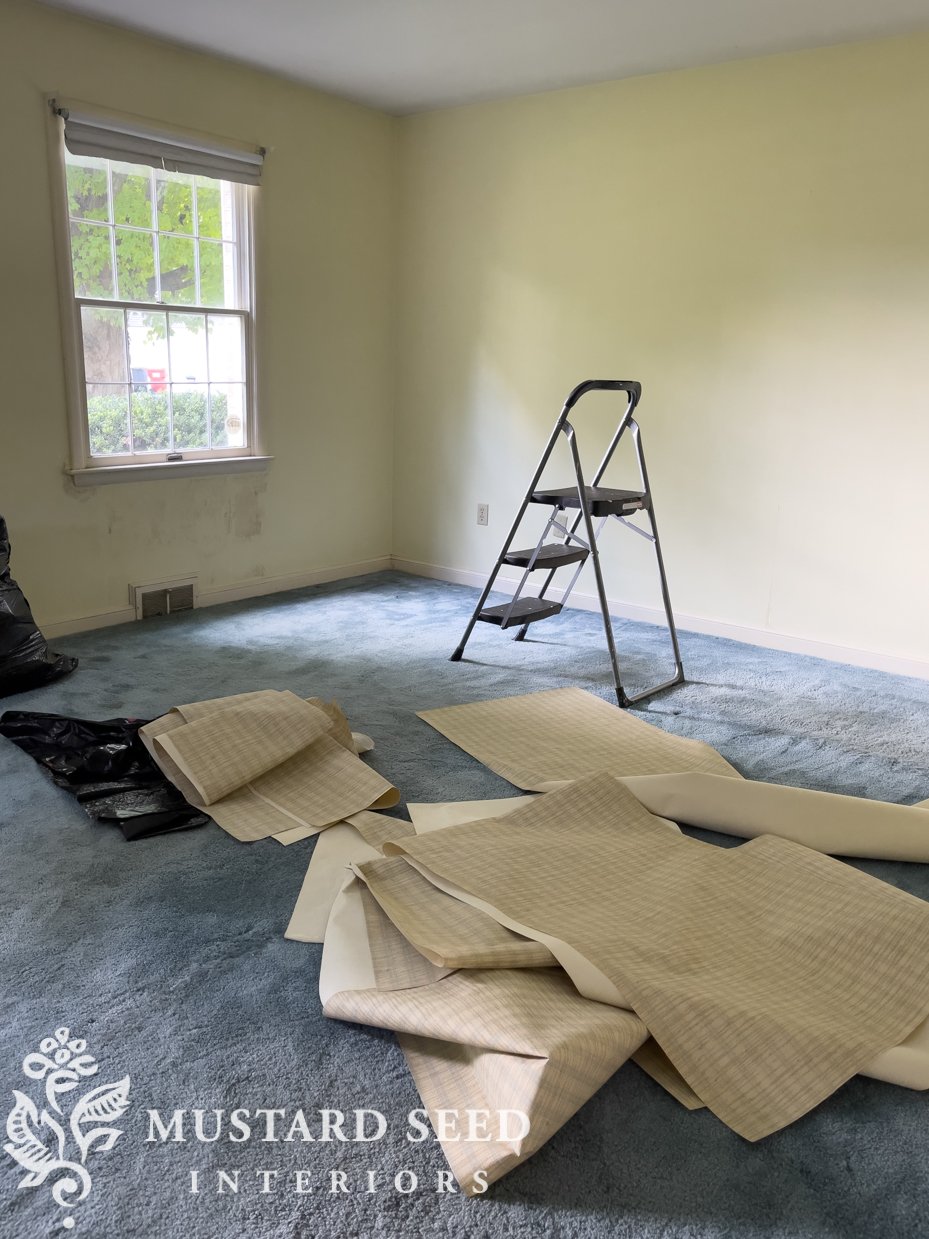 The windows in our bedroom were the worst.  They are the most exposed windows in the house and had evidence of moisture damage above and below the windows.  We felt like they really needed to be replaced.  You can see in the picture above that there was mildew under the windows. The paint was also bubbled and cracked above the windows.

The representative crunched some more numbers.  It would be $14,000 to replace three windows.  I don’t know what your expectations would be, but I was thinking it would be closer to $800 – 1,000 per window, so this obviously wasn’t even in that same neighborhood.  We weren’t in the same hemisphere.  I’m all for splurging where it matters and, yes, windows do matter, but there have to be some other good options out there.

I was talking to my mom about it and she suggested I call Window World.  They had replaced all of the windows in their house in Florida, including a sliding door and a couple of specialty windows for a very reasonable price and were pleased with the quality of the product and the service.  Not only did they notice a huge difference when it came to energy efficiency, but also when it came to diminishing outside noise.  I put in a call to Window World that day.  (They are a national brand if you’re not familiar with them.)

The Window World representative went through the same routine…measuring, taking notes, and sitting at the table to crunch some numbers.  I braced myself as he sat down to share the estimate.  The entire house would cost less than three windows for one bedroom.  I told the representative that he should have someone else come and present their quote before Window World because I was just about bursting to sign the contract.  I could’ve hugged him.  I was more sensible than that and I asked for an estimate for just the bedroom as well.  We have a lot of big projects and we want to make sure we don’t get too far ahead of ourselves.

Given that the estimate was so much less, I wanted to make sure the quality was still what I wanted.  Were they double-paned?  Yes.  Would they tilt for cleaning?  Yes.  Were they covered under a warranty?  Yes.  The only difference that was of note to me, other than the price, was these windows were vinyl instead of wood.  In the end, the wood would be painted anyway, and would I really care?  Given this house has had termite issues in the past, vinyl is probably a better option, anyway.  I also had my mom’s glowing testimony, which counts for a lot.  If you ever want a truthful review on something, just ask my mom.  She’ll give it to you straight and unfiltered.

I didn’t place the order on the spot, because the rep needed to do a bit of research.  The style of the window I wanted wasn’t one most people order.  In fact, he had worked for the company for over 10 years and he never had an order for an 8-over-8 fully divided window before.  They weren’t even pictured in the sales pamphlet except for a small slice of a window towards the very end of the book.  He spoke with his manufacturer, though, and confirmed that they can make that window.

I received e-mails with detailed estimates for the entire house as well as for the bedroom.  To replace the three front bedroom windows was $2,800 and we decided to start there.  It took about 12 weeks for the new windows to arrive and that’s a lot of time to question my decisions.  I hoped they understood that I wanted fully divided panes, not just dividers inside the panes.  I know those are popular for the ease of cleaning, but I just love how fully divided panes look.  Windows are a huge architecture feature and I want them to really pop.

The installation crew arrived yesterday afternoon and I nervously watched as they pulled our windows off the truck.  They were perfect.   They were even better than what I envisioned. 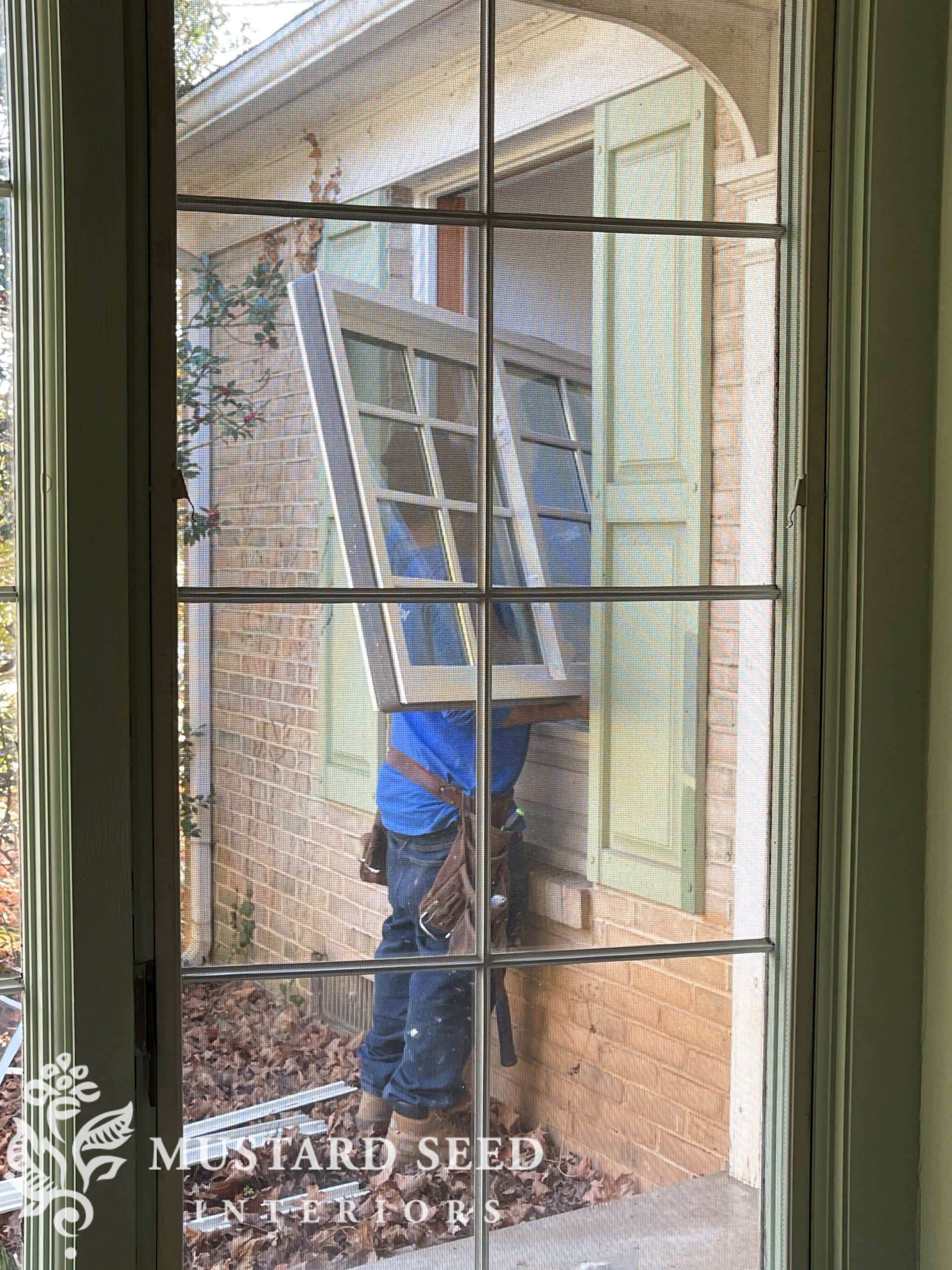 The crew quickly installed all three windows while I peeked, but I couldn’t wait to see how they looked from inside the room.  Windows, to me, seemed like a pretty boring part of a renovation.  I mean, if you’re adding new windows, that’s pretty exciting, but if you’re just replacing one window with the same kind of window?  That doesn’t seem like fun money to spend.  I was so wrong.  They look amazing and I am already excited about replacing the rest of the windows. 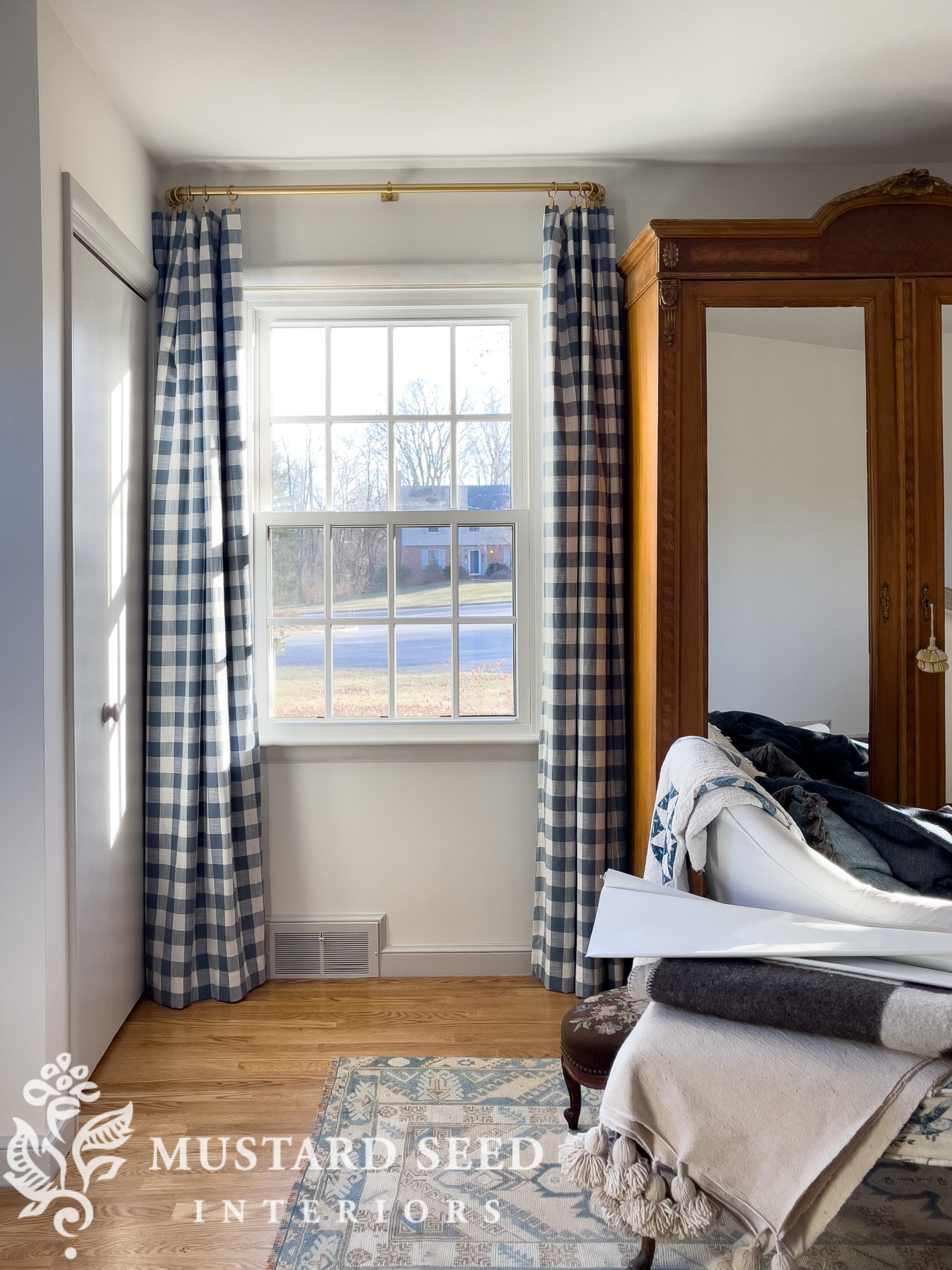 The panes are fully divided inside and out, which looks so sharp.  It’s a bit more tedious to clean, but I really don’t care about that.  I only clean windows when they need it or a couple of times each year, so I can put up with it if I love them.  And I love them. 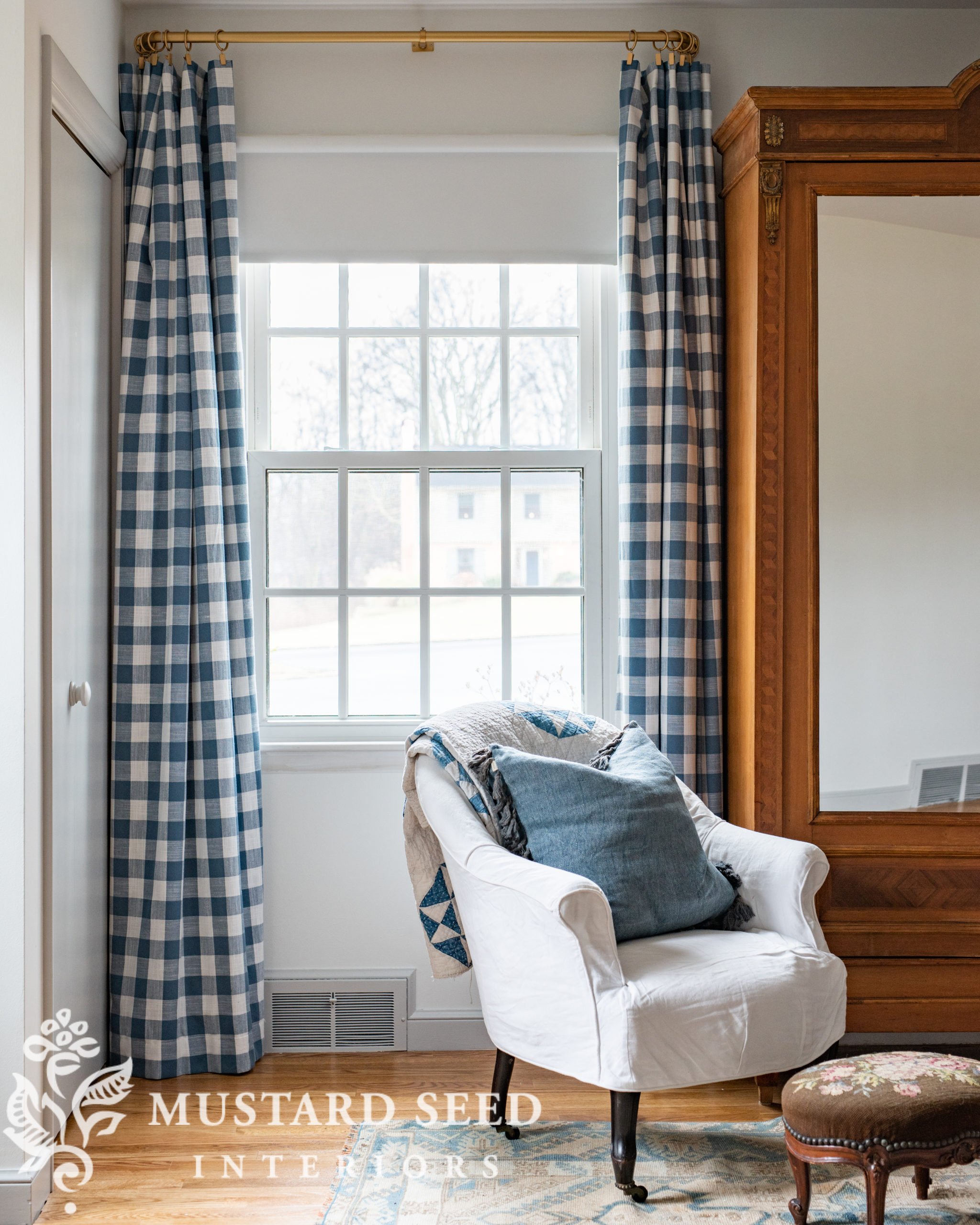 (You can read about the curtains and hardware HERE.) 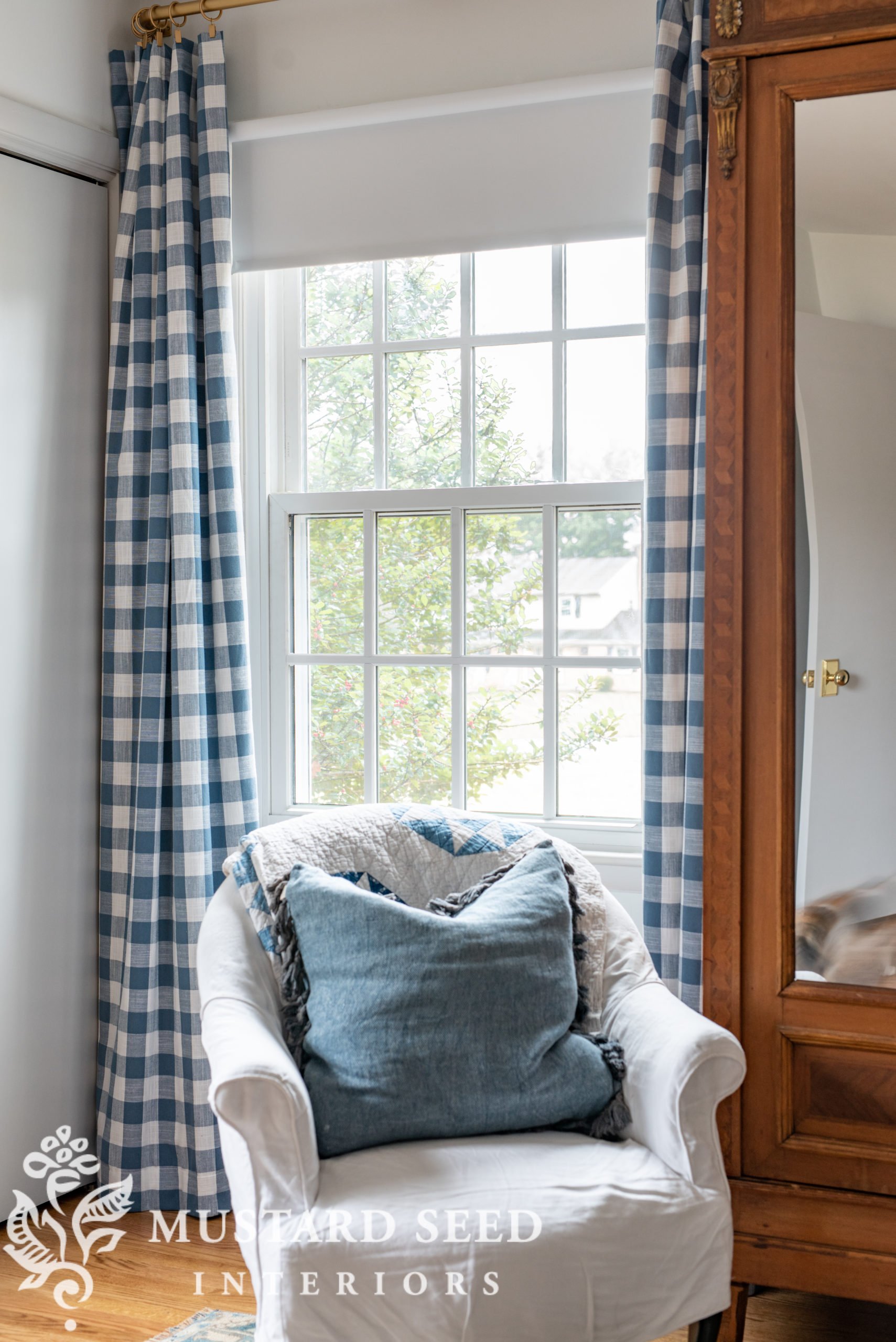 I also bought new roller shades for the windows (just simple vinyl ones) and now I need to patch and paint the trim.  I figured I would wait to do that after the new windows were installed. 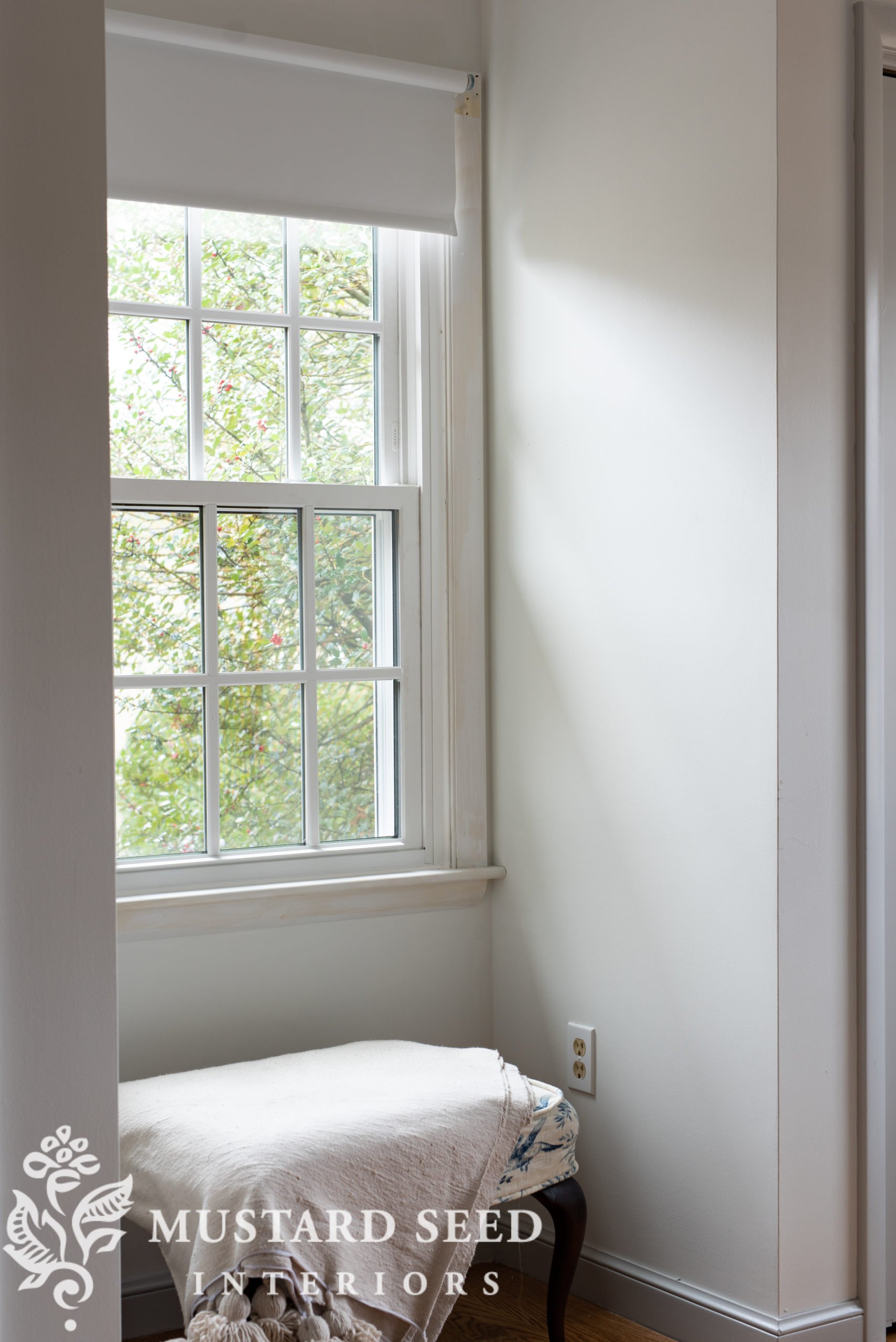 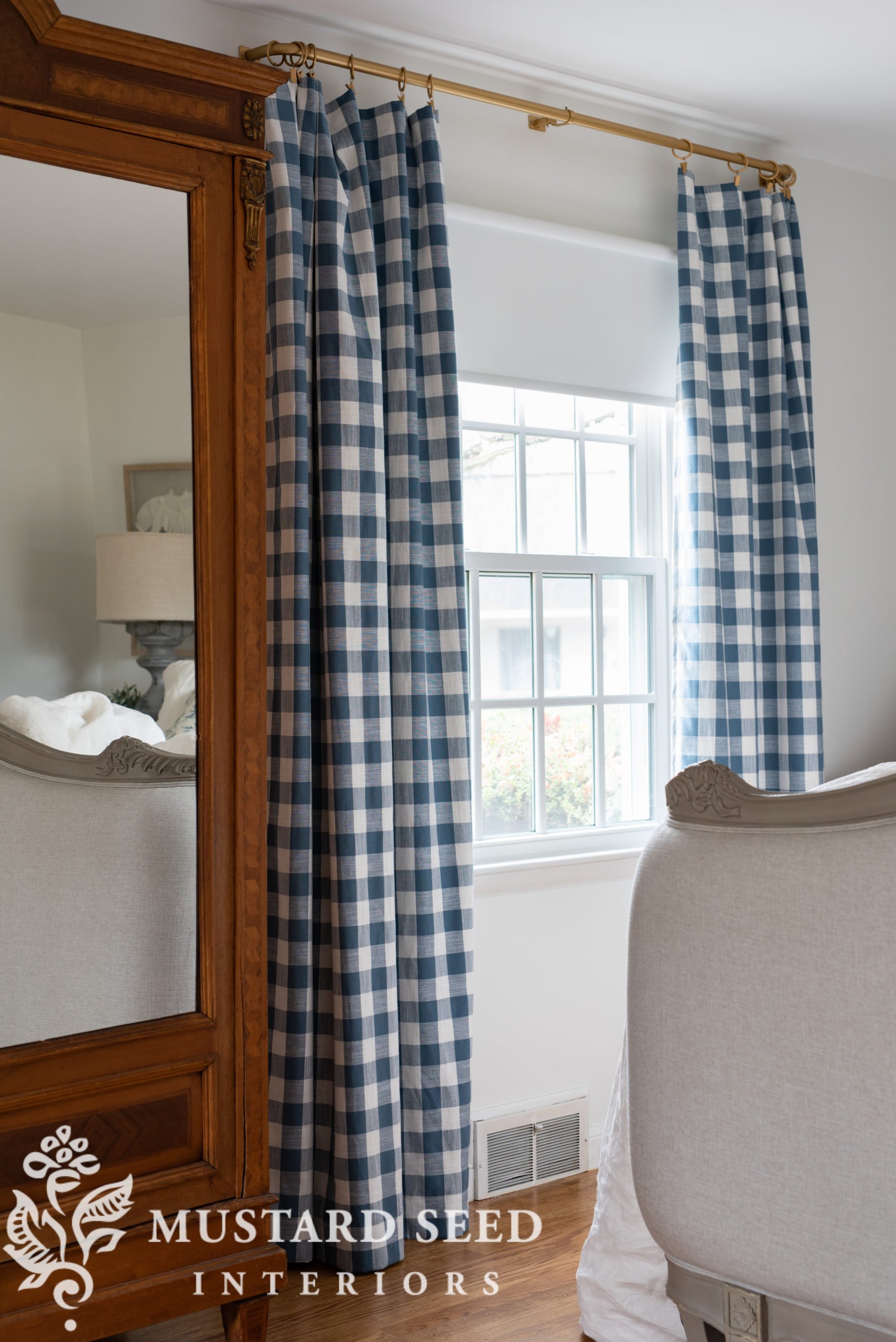 Is anyone else as in love with divided-pane windows as I am?  Our Minnesota house had huge picture windows, which were great for letting in light, but they always felt too modern for me.  These feel charming and timeless, both qualities I like in a home. 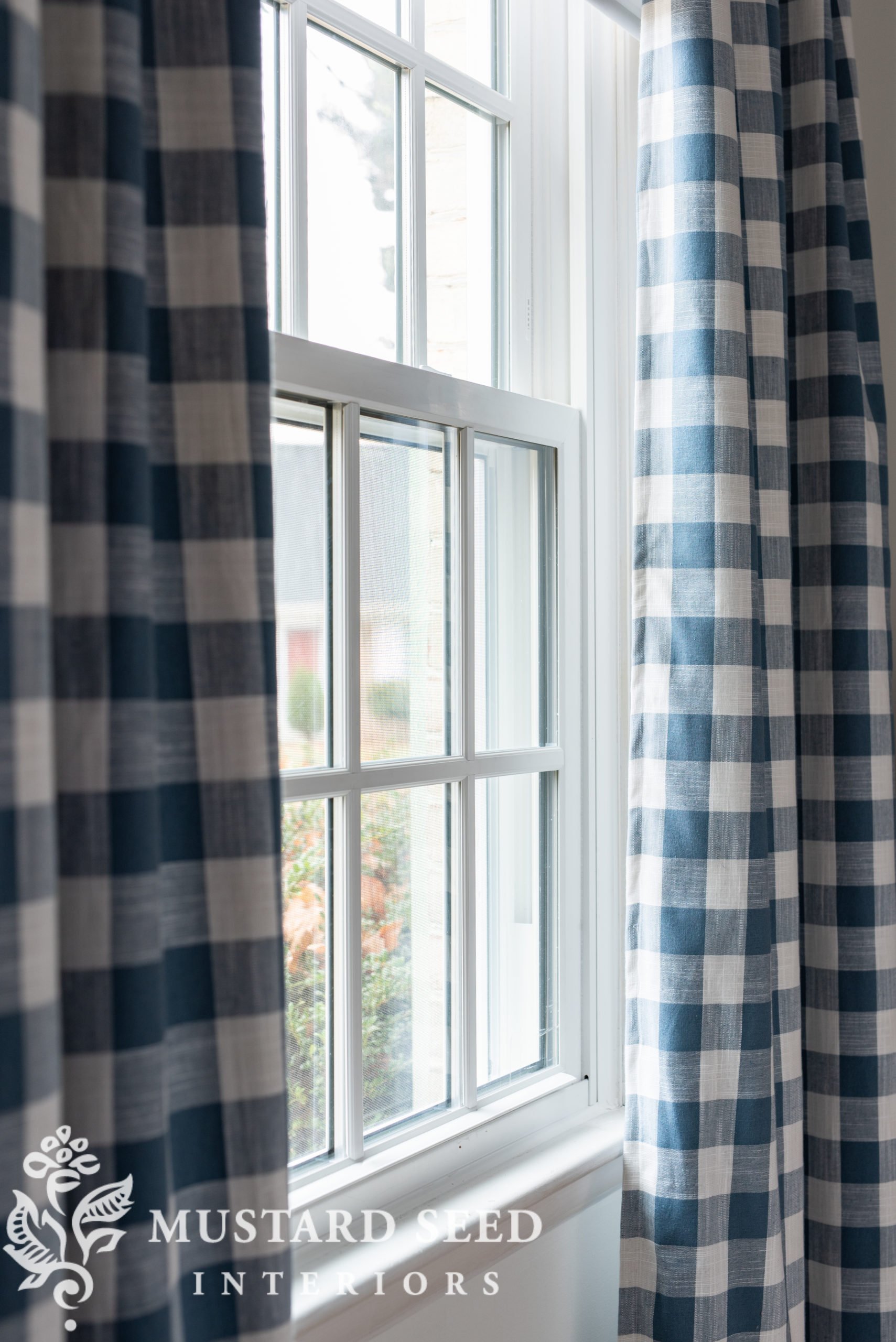 We need to tackle the kitchen and the pool, but once we get those big projects behind us, the windows in the rest of the house will be next on our list…