Last week, I just needed to get out and away from my desk.  I had plenty of work to do and the weather was terrible, but I was determined!  I had planned it and I was going to stick to my plans.  I’m also finding that if I use “I have work to do” as an excuse, then I won’t ever leave the house!  There is always some sort of work to do.

So, I went to my PT appointment to have my shoulder worked on (it’s getting so much better) and then I hit a few of my favorite antique and second-hand shops.  There is not a ton of antiquing right here in Rochester, but there are a few spots I like to hit every now and then.  I have been looking for a few things…a mirror for the living room, a large basket, and a buffet-sort-of-piece for a tough spot in our bedroom.  (There is an air intake grate that can’t be blocked, so I need to find a piece with open legs.)

Anyway, I hit a couple of thrift stores and came up empty.  I then went to Collin’s Feed & Seed.  As it sounds, it’s a feed and seed store, but that’s only about 25% of the actual retail space.  The rest is an antique store.  And it is packed.  You feel a bit like your might topple a large stack simply by moving through the spaces, but there is all sorts of cool stuff and it’s pretty well sorted.  They try to put like-things together and also have sections grouped by color.  I always enjoy picking around and discovering things I may have missed before.

I ended up finding a great basket with a lid.  I love these to put on top of wardrobes or to even use it as a side table/coffee table or a trunk.  They’re just so handy.  This one is pretty dirty, so I’ve stashed it in the sewing room and, when the weather is warm and sunny, I’ll take it outside and hose it down.  Once it’s clean, I’ll most likely use it to store pillow forms and upholstery supplies. 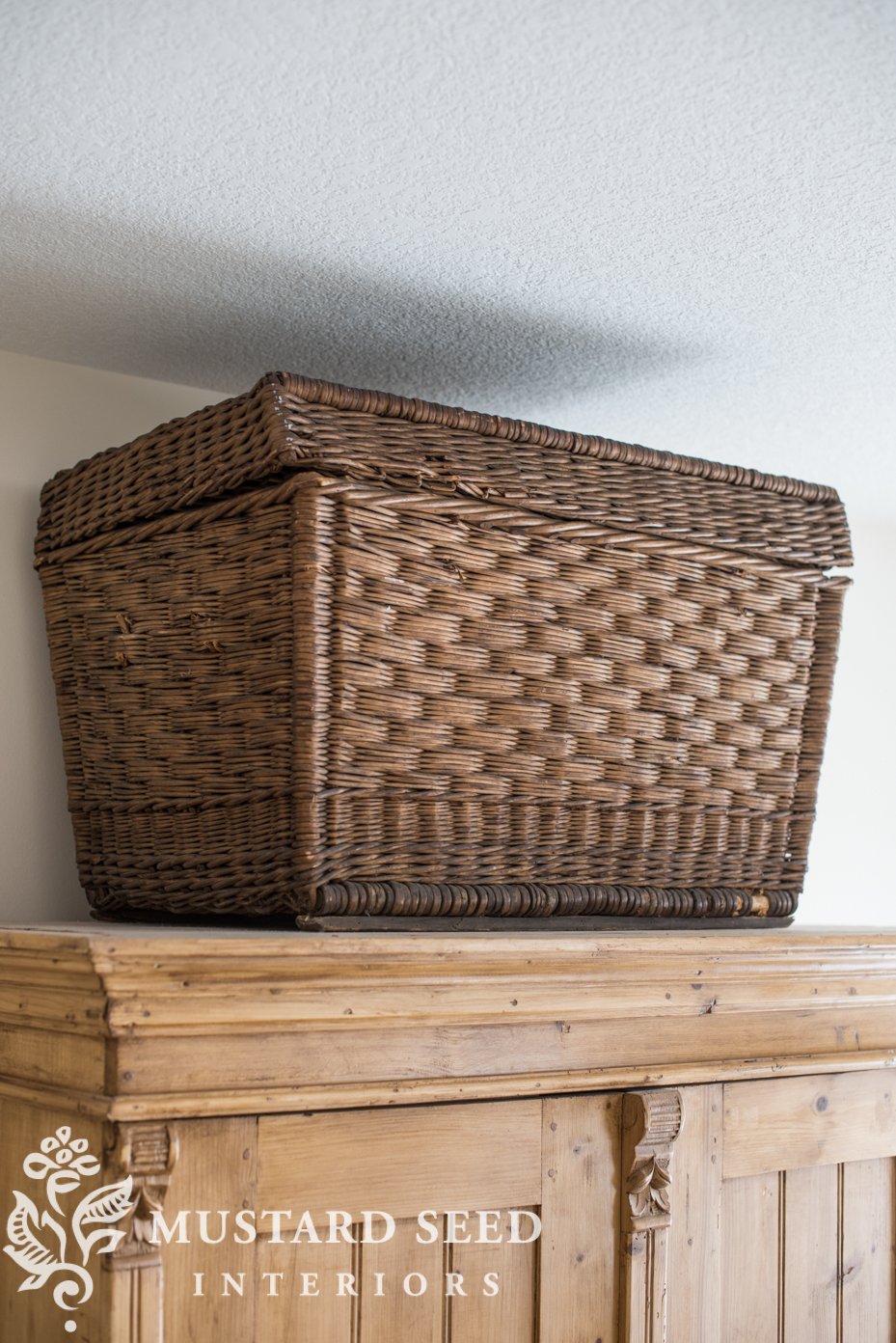 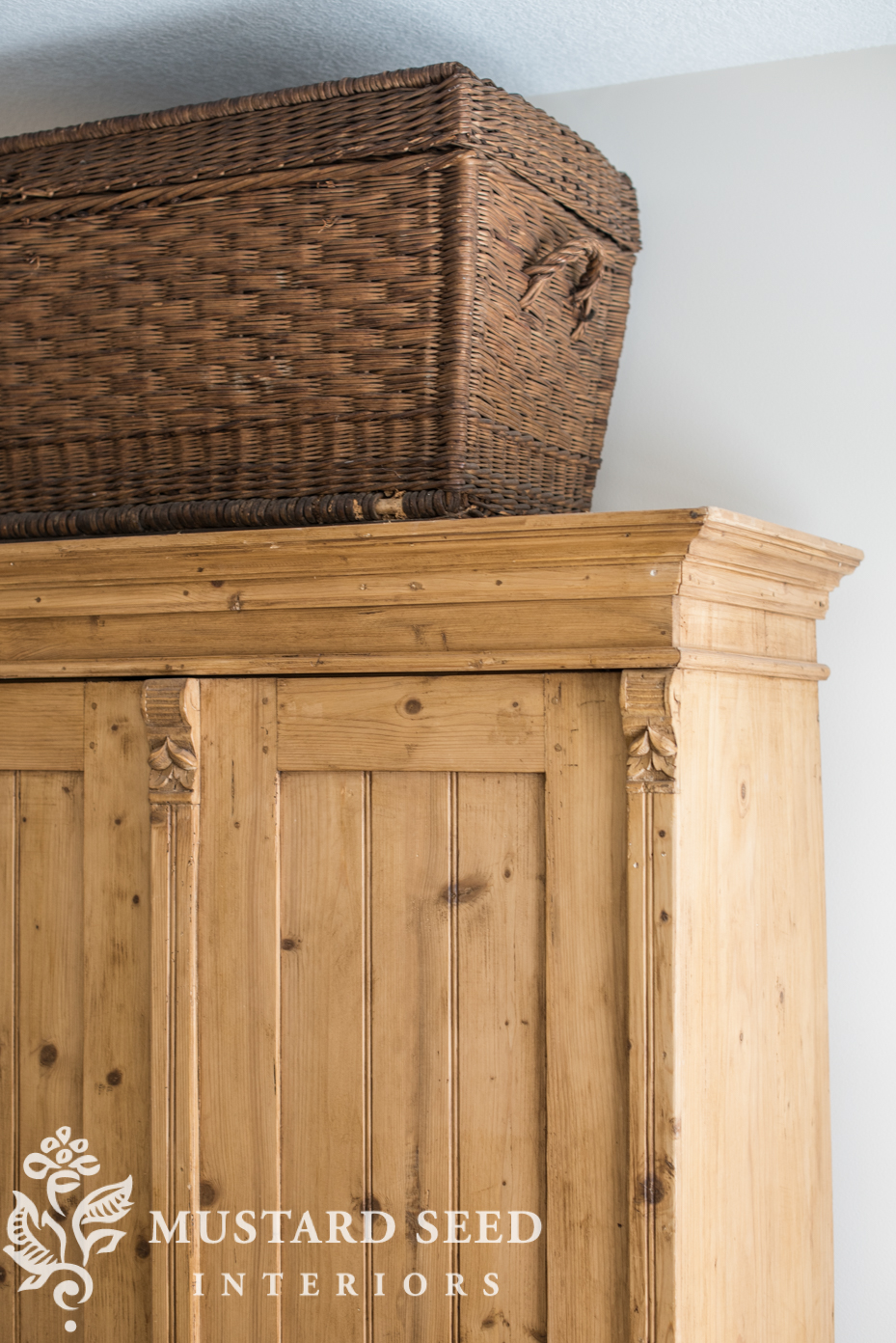 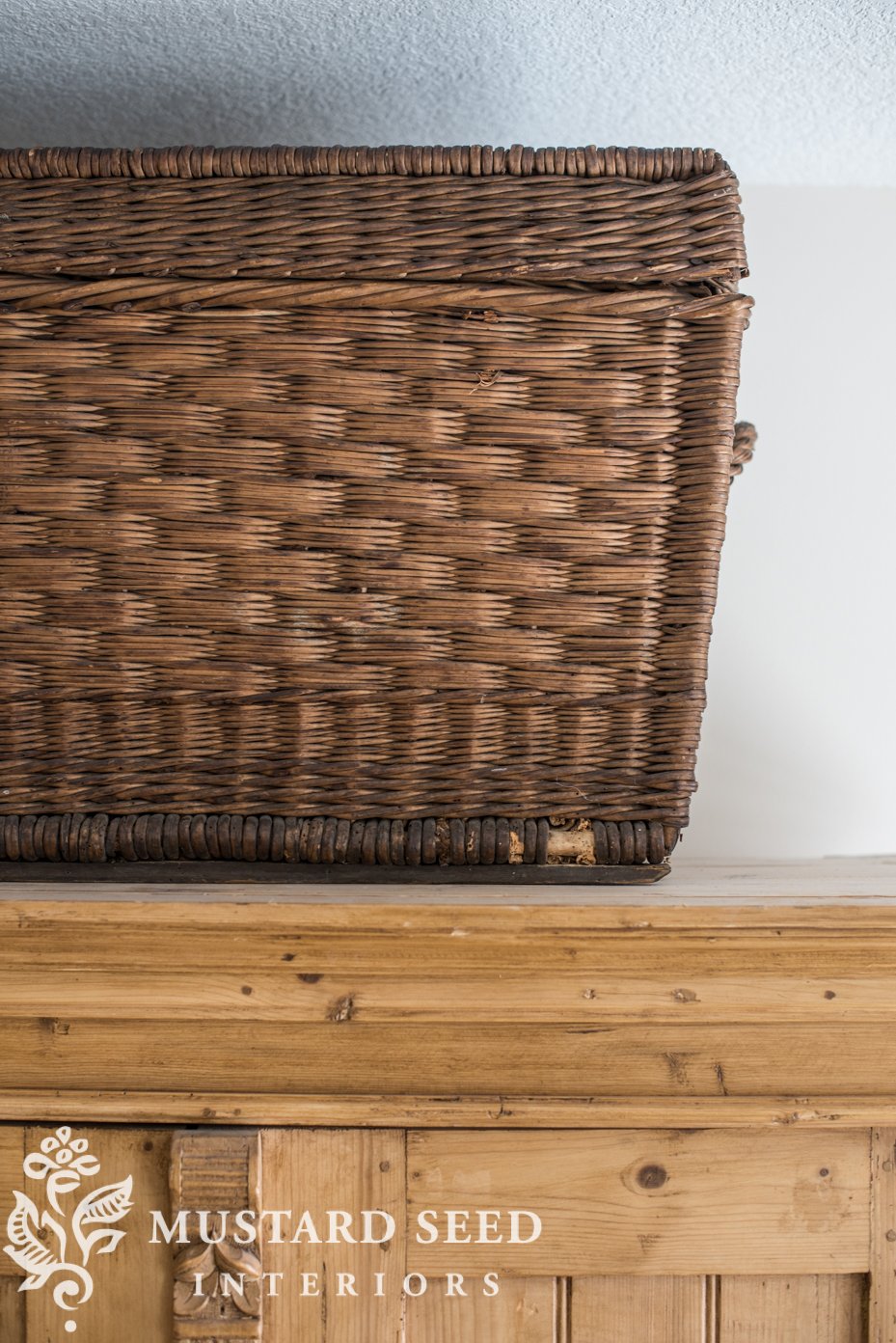 I found another large basket that is so sturdy!  It has metal straps around the top and a wooden base. 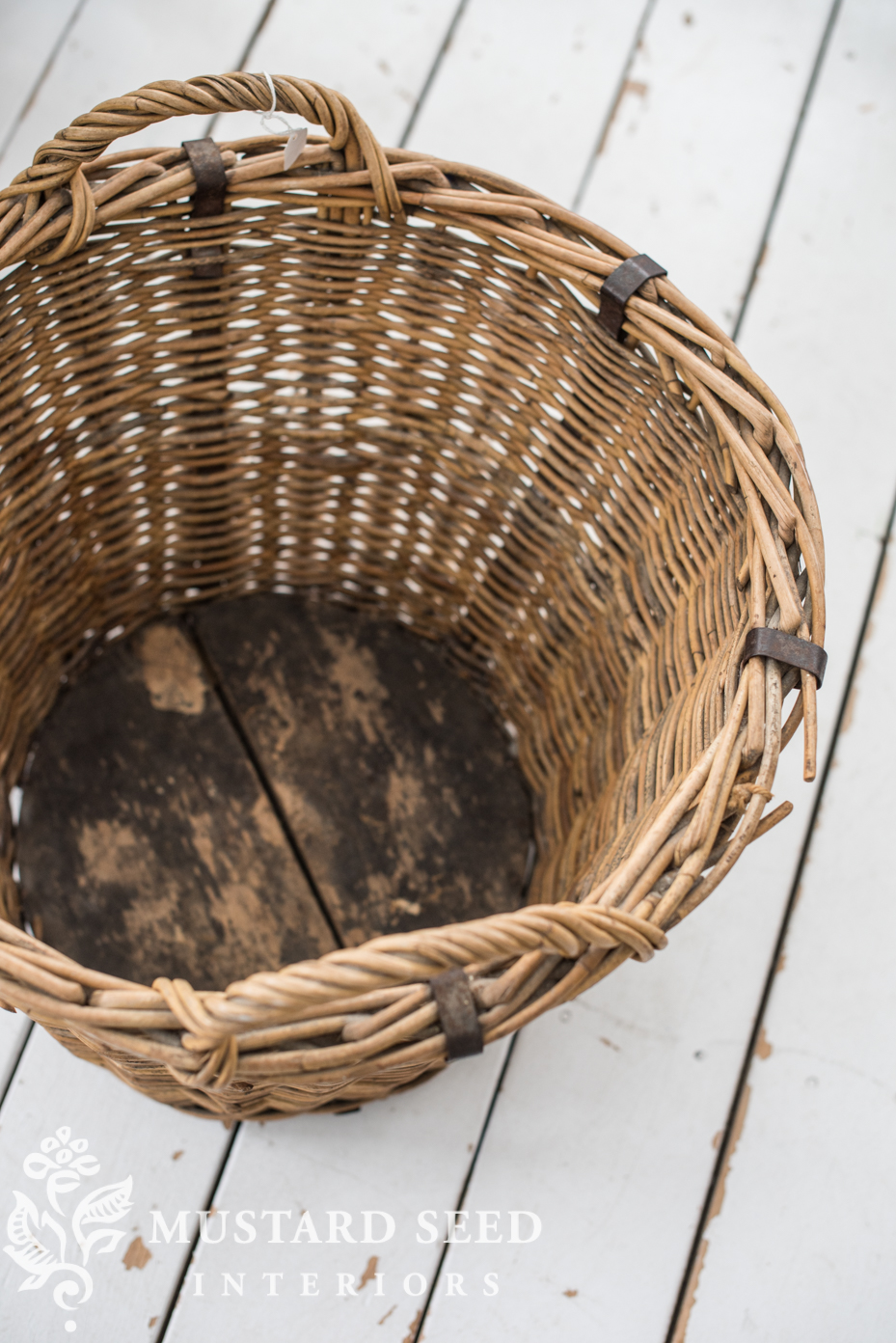 And it’s a great size!  It can be used as a wastebasket, a decorative holder for a large plant/small tree, for storage, etc. 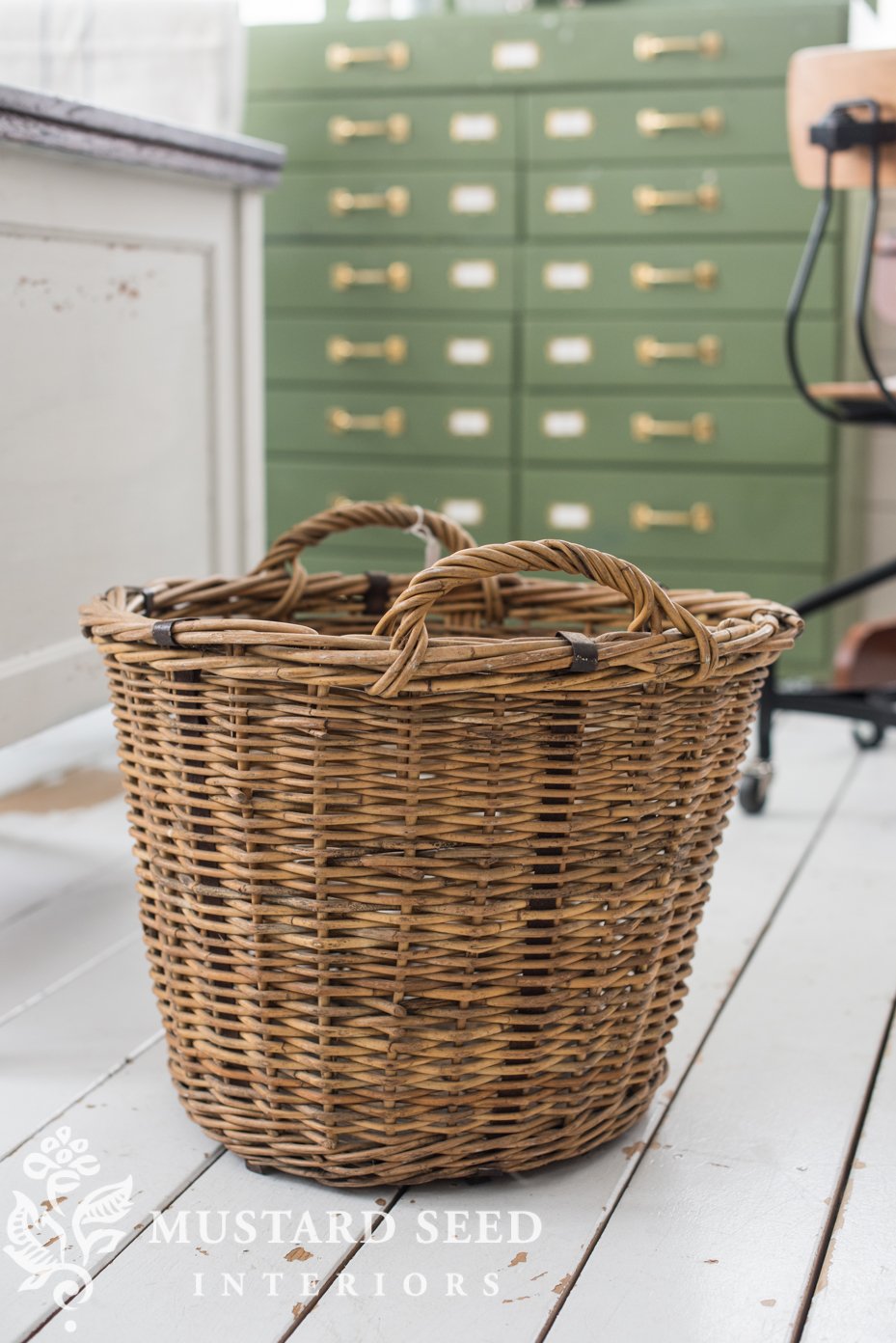 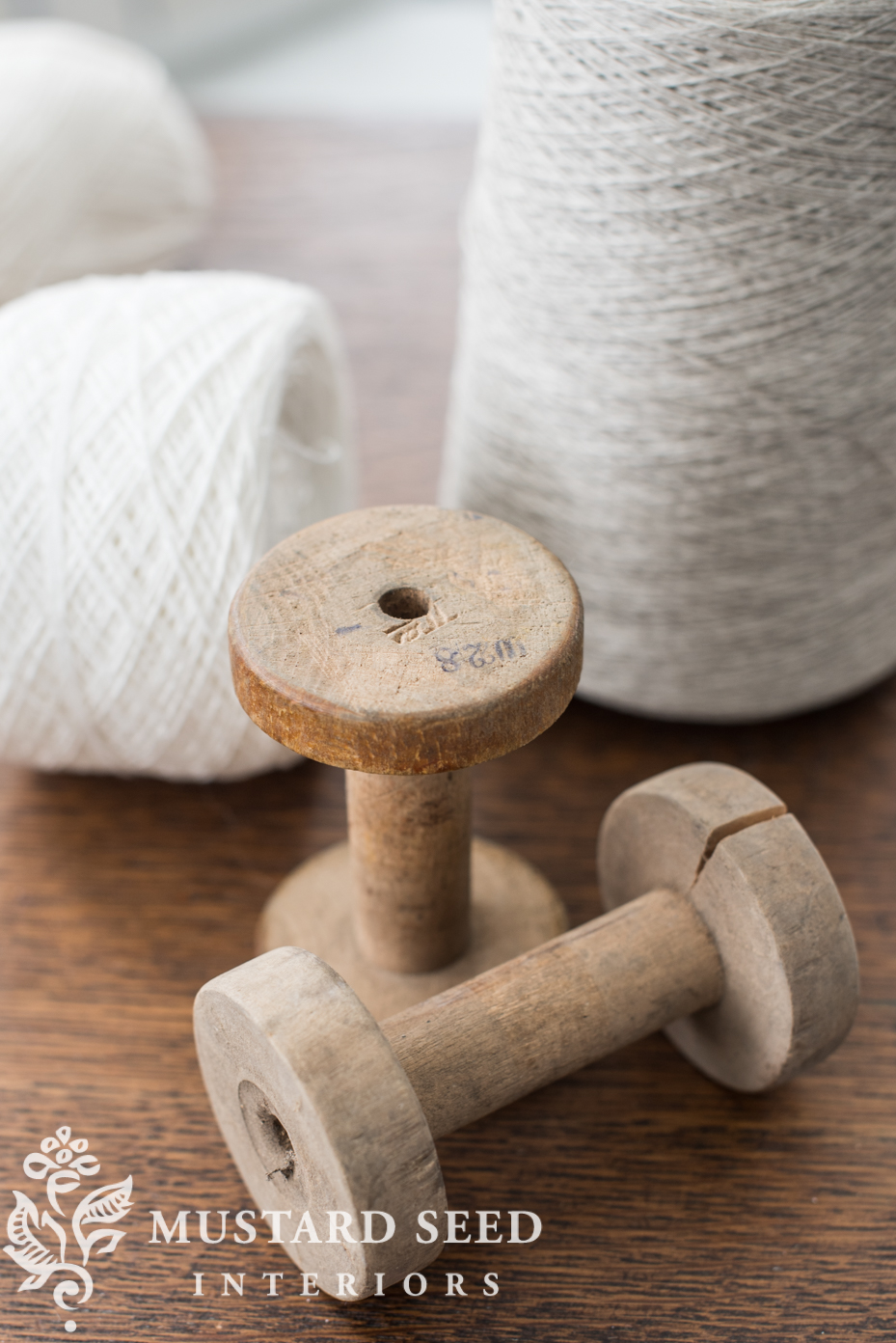 …a bag of sewing needles in little wooden cases… 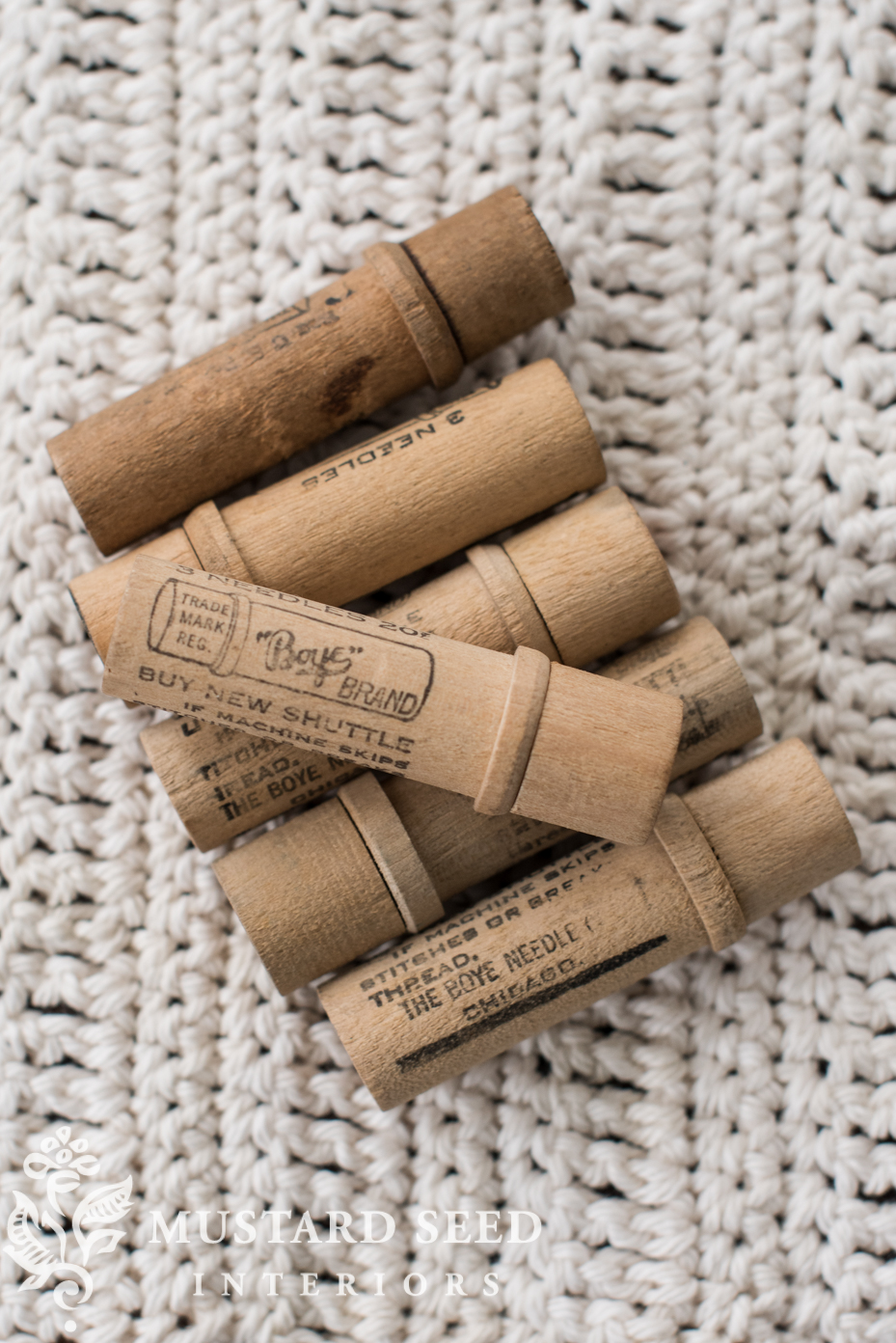 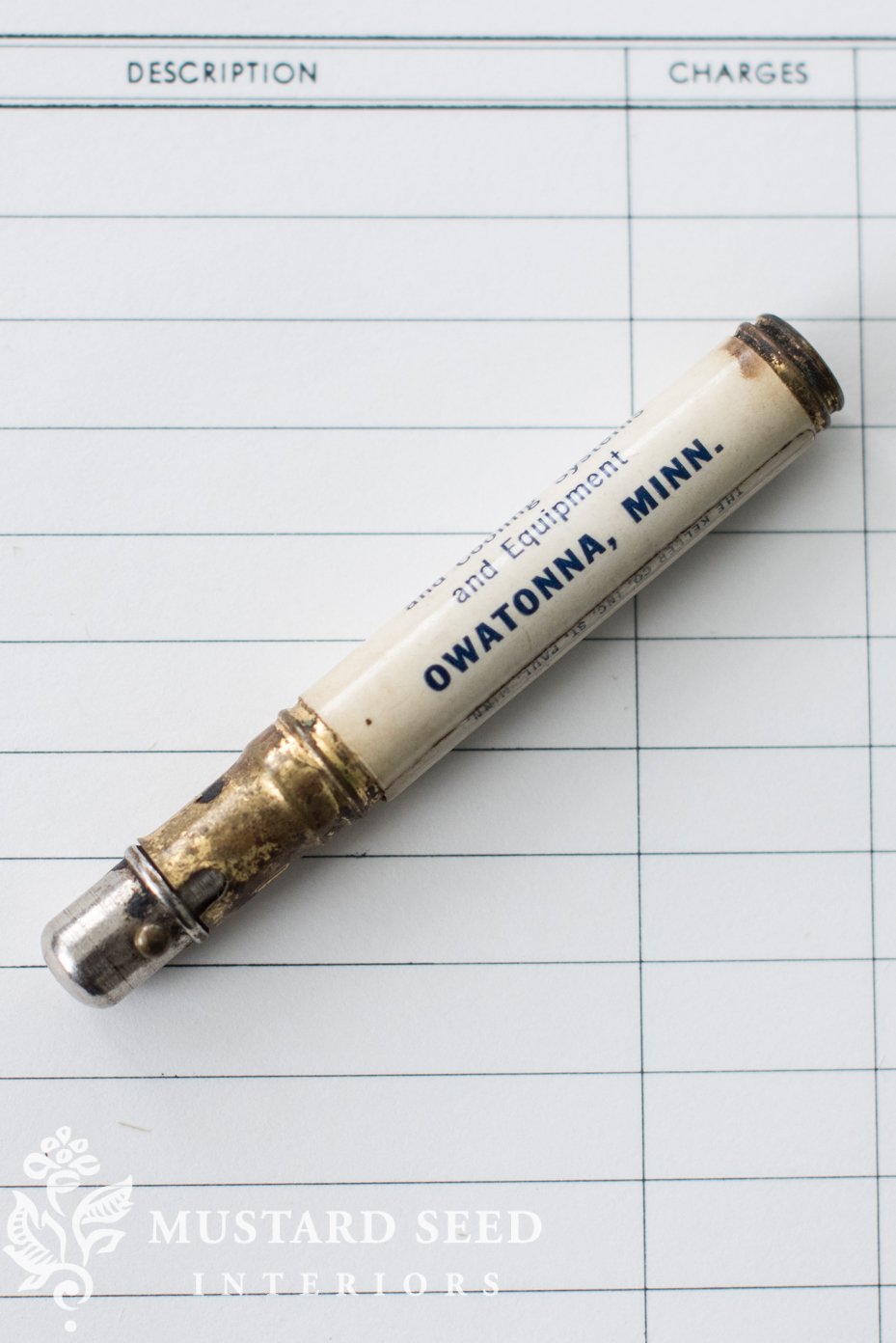 I love little useful things like this that are practical and unique. 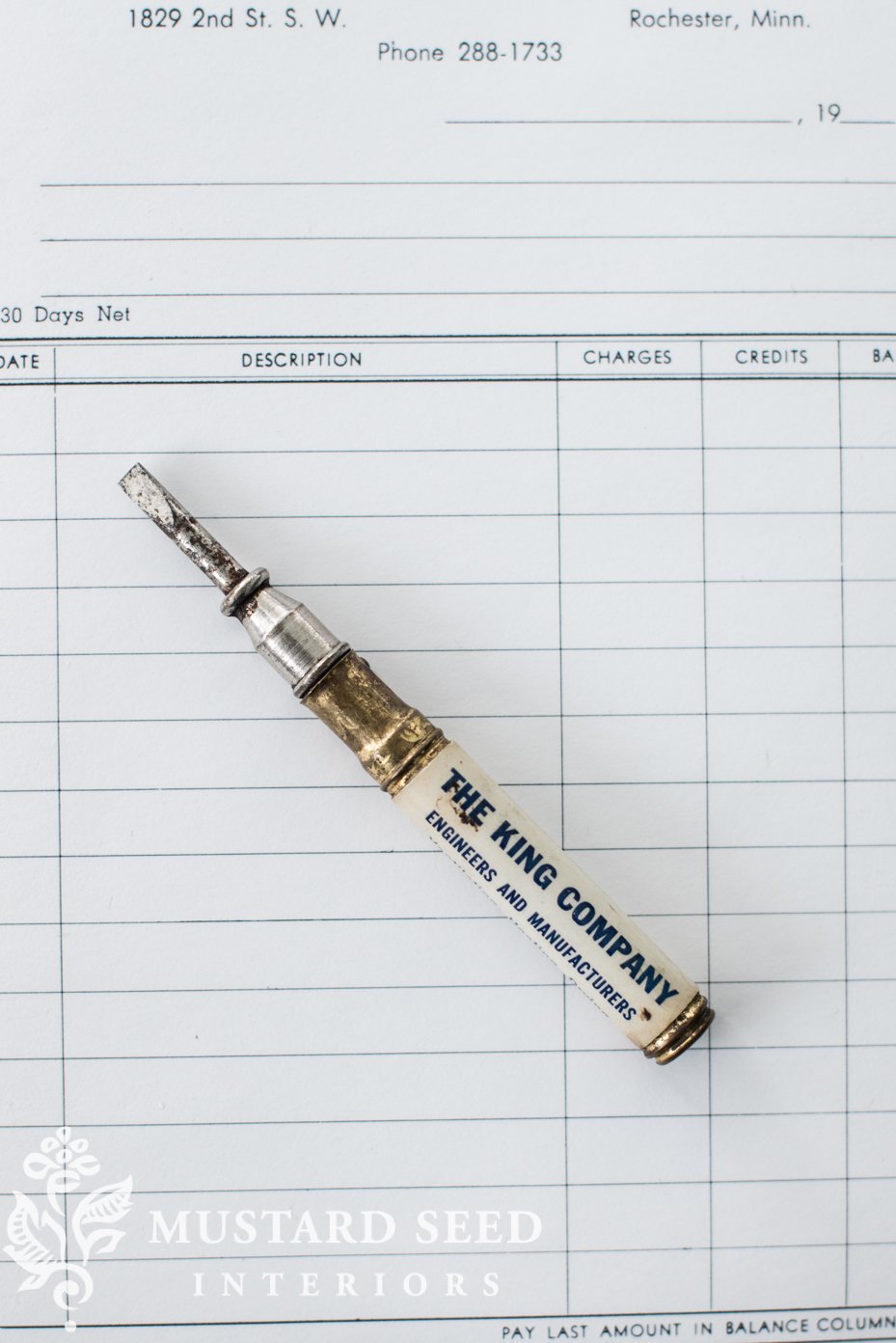 I bought an unusual dip pen, too, but I forgot to get a picture of it.  I’ll have to share, though, because I’ve never seen one like it.

After Collins, I went to Kismet, a local consignment shop.  They have a very high rate of inventory turnover, which I love.  There is a completely new selection every time I go there.  I spotted a wood-framed mirror for $28 and decided to get it.  I wasn’t sure if it would be too small for the living room, but it was worth a shot for that price and I can always use it in another room if it doesn’t work there.

I’ve had it leaning up against the dresser for a few days, mulling it over.  It’s right on the edge of being too small.  I had this idea of putting some shutter behind it, which I think would look really cool, but the shutters I have in the garage are way too big.  I might head back to Collins to see if they have anything that would work.  It would add another layer of texture and also visual bulk. 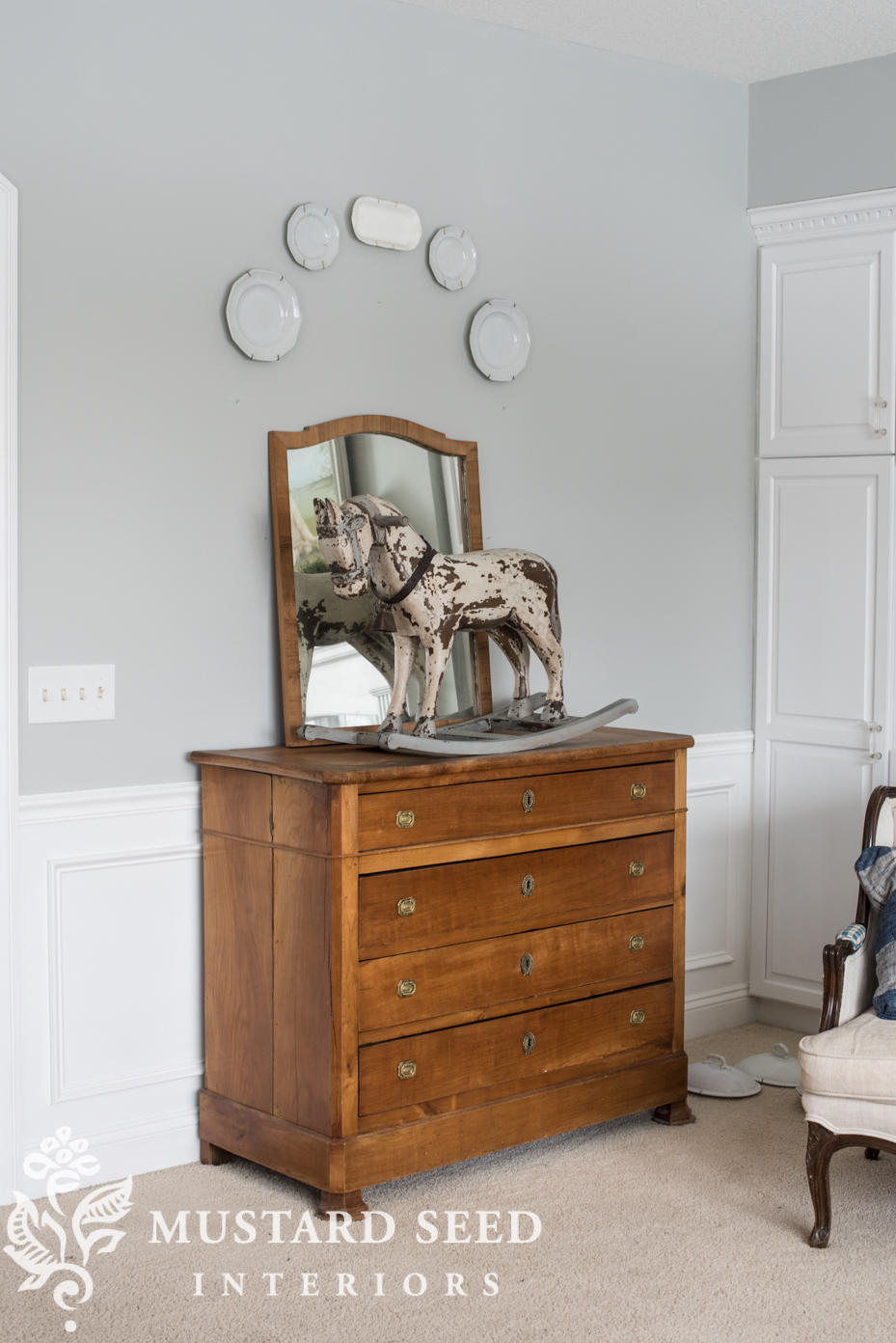 The mirror is the perfect tone of wood, though, and a pretty shape. 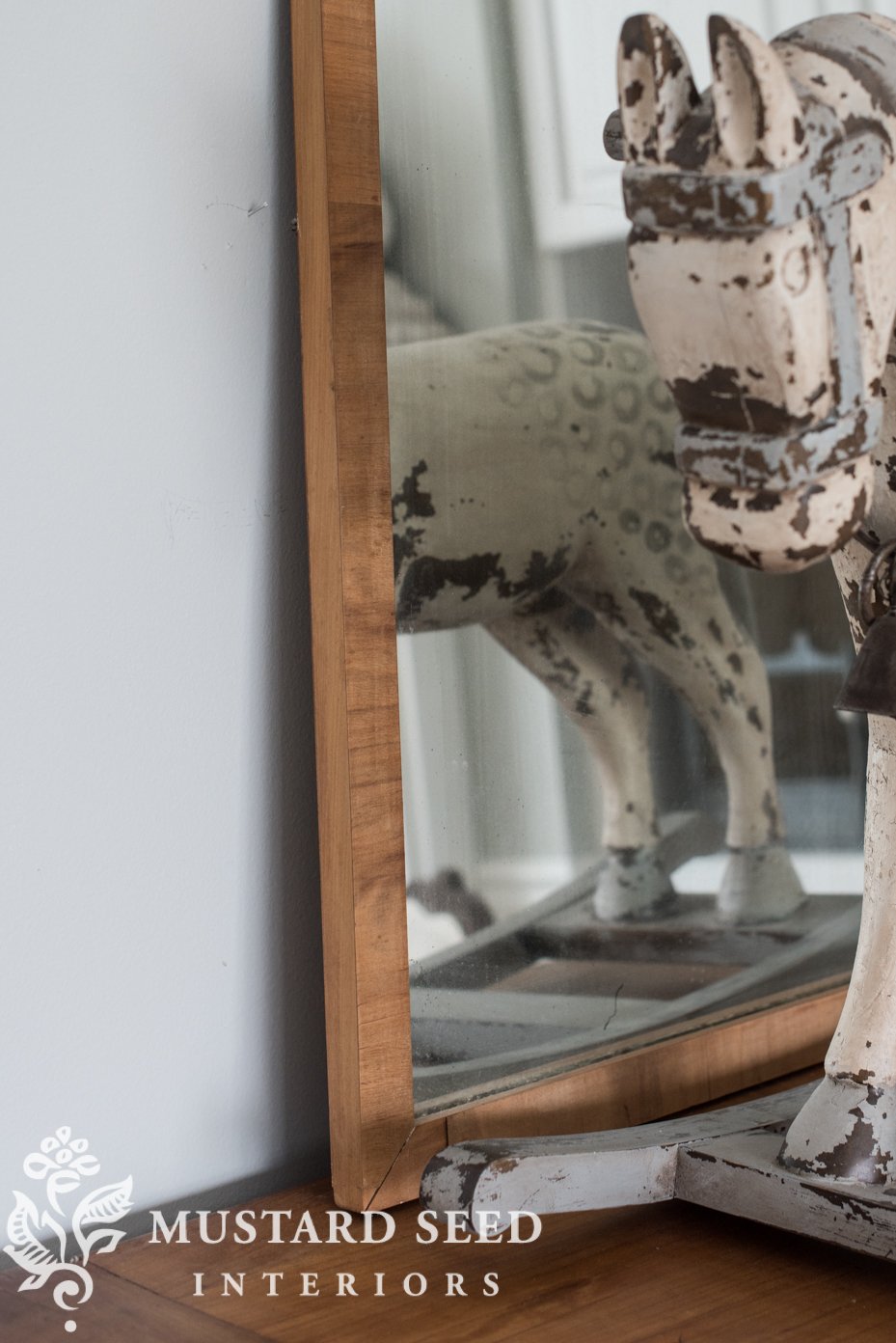 I also bought an antique medicine cabinet that was marked down to $48, which is a great price for a piece like that.  It would be at least triple that in most antique stores.  We’ll hang it above the toilet in our bathroom. 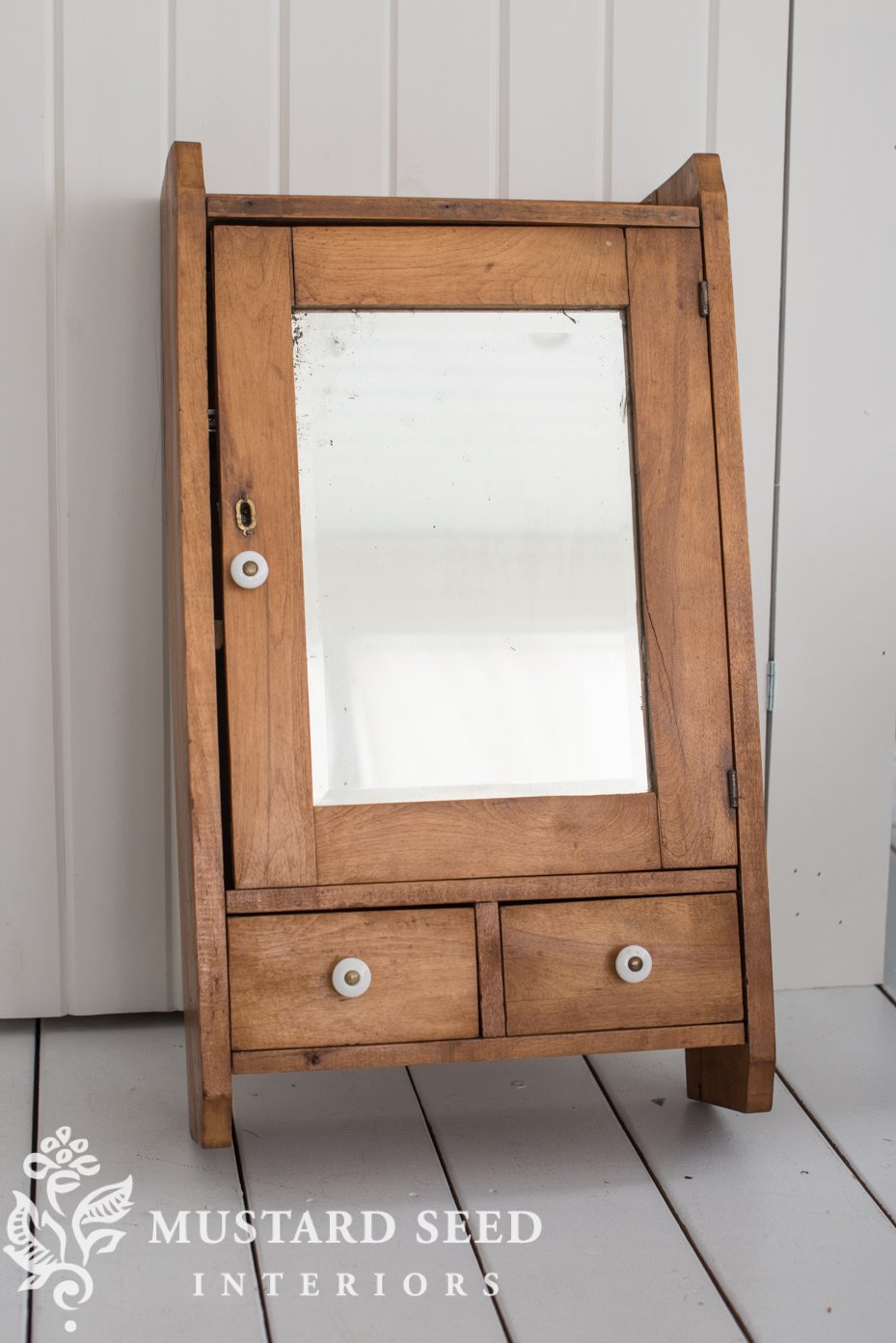 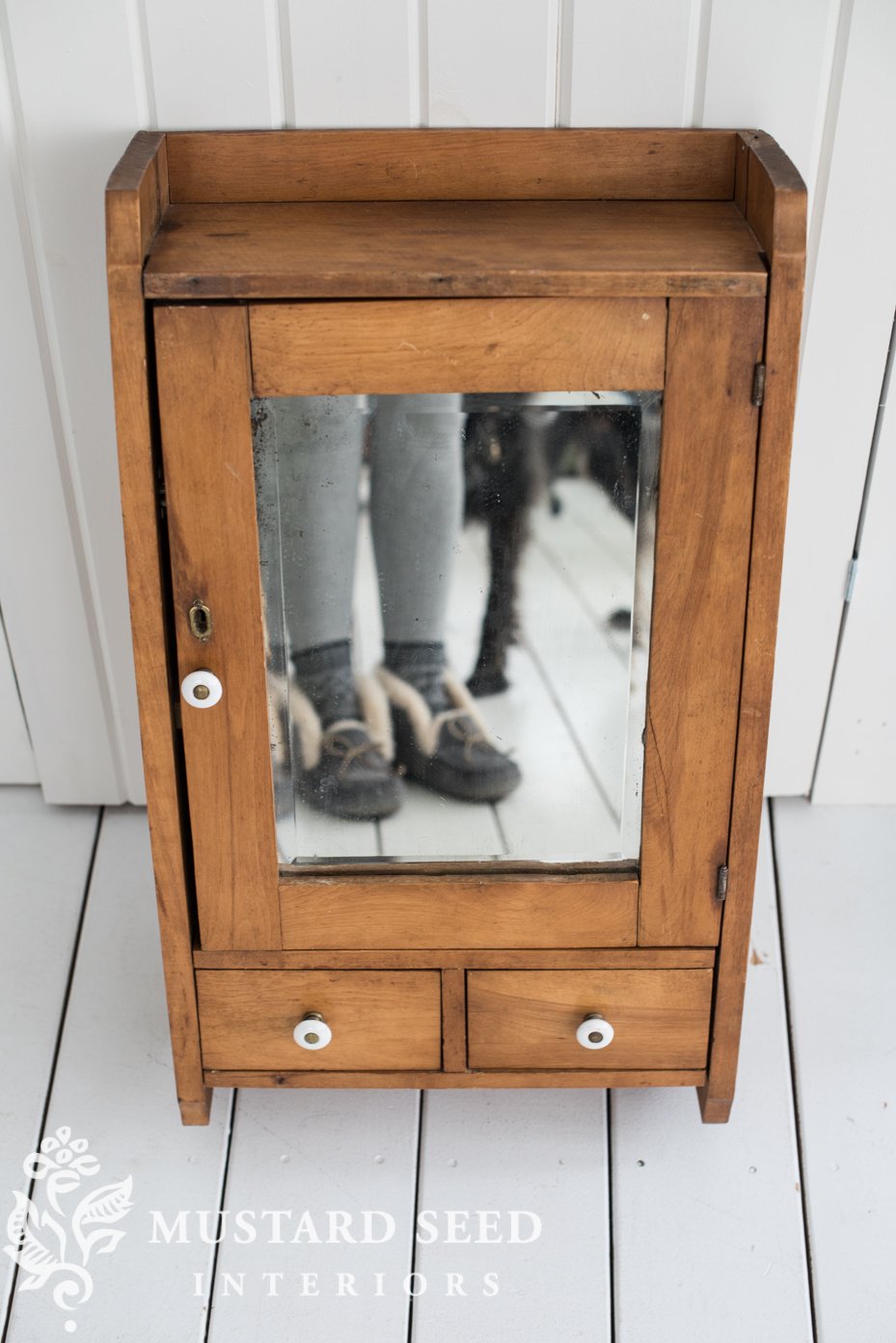 And, lastly, I bought a cool handmade wooden box for $24.  It’s a beautiful old piece with dovetailed joints, a lock, and a slot on top.  I’m guessing it may have been used for collecting payments or offerings, perhaps?  Maybe ballots?  It’s the perfect size to use as a file box in my office, though.  I put it on my bookshelf and I’m still deciding if I like it there or not.  I have a feeling it’ll get moved around a few times before it finds a home. 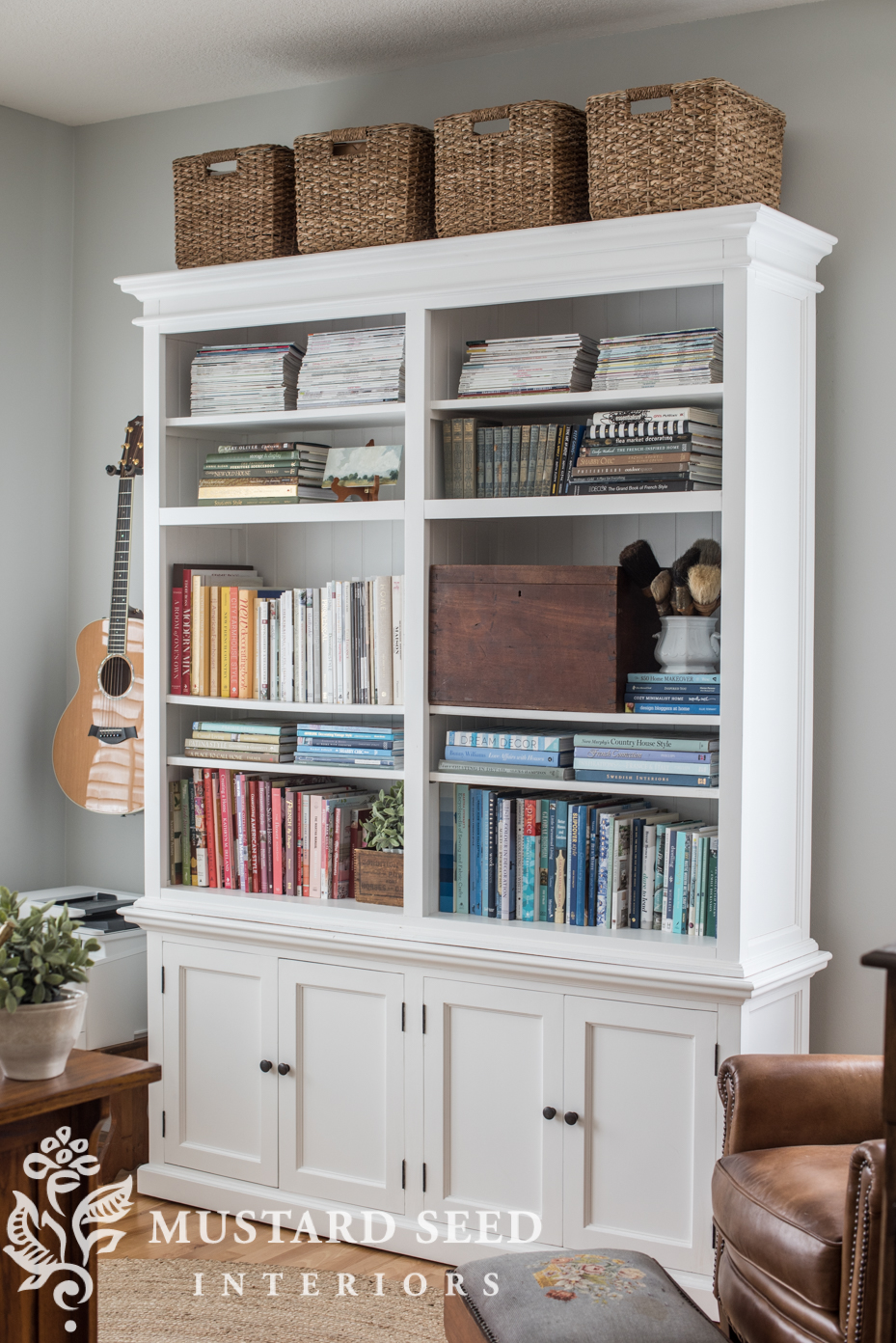 While I was out, I also had all of the wood cut for the built-in studio shelf.  Jeff and I are planning on building that next week.

After being out of commission for so long because of my shoulder, it’s been nice to start working on home projects again…even small ones.  I have some bigger ones coming up that I’m excited about, but January has been an unusually busy month, so I’ve just had to chip away at smaller things here and there.