I must admit, when we got on a plane headed to Florence, Italy, I wasn’t ready to leave Paris, yet.  I loved our time there and it was tough to pack up our belongings and leave that apartment.  I was excited about Italy, but Paris would be hard to top.

Well, Tuscany was not going to be upstaged or underestimated.  It charmed me throughly with mountains, walled cities, narrow cobblestone streets that opened into piazzas, olive groves, and sun-kissed paint colors.

I can’t wait to tell you all about it.  As I did with Paris, I’ll tell you about the trip in stories instead of in one long narrative.

Today, I am going to tell you the story of a hutch hidden in an attic in Tuscany that needed a little TLC.

Do you see the red building on the left side of this tiny street in Barga? 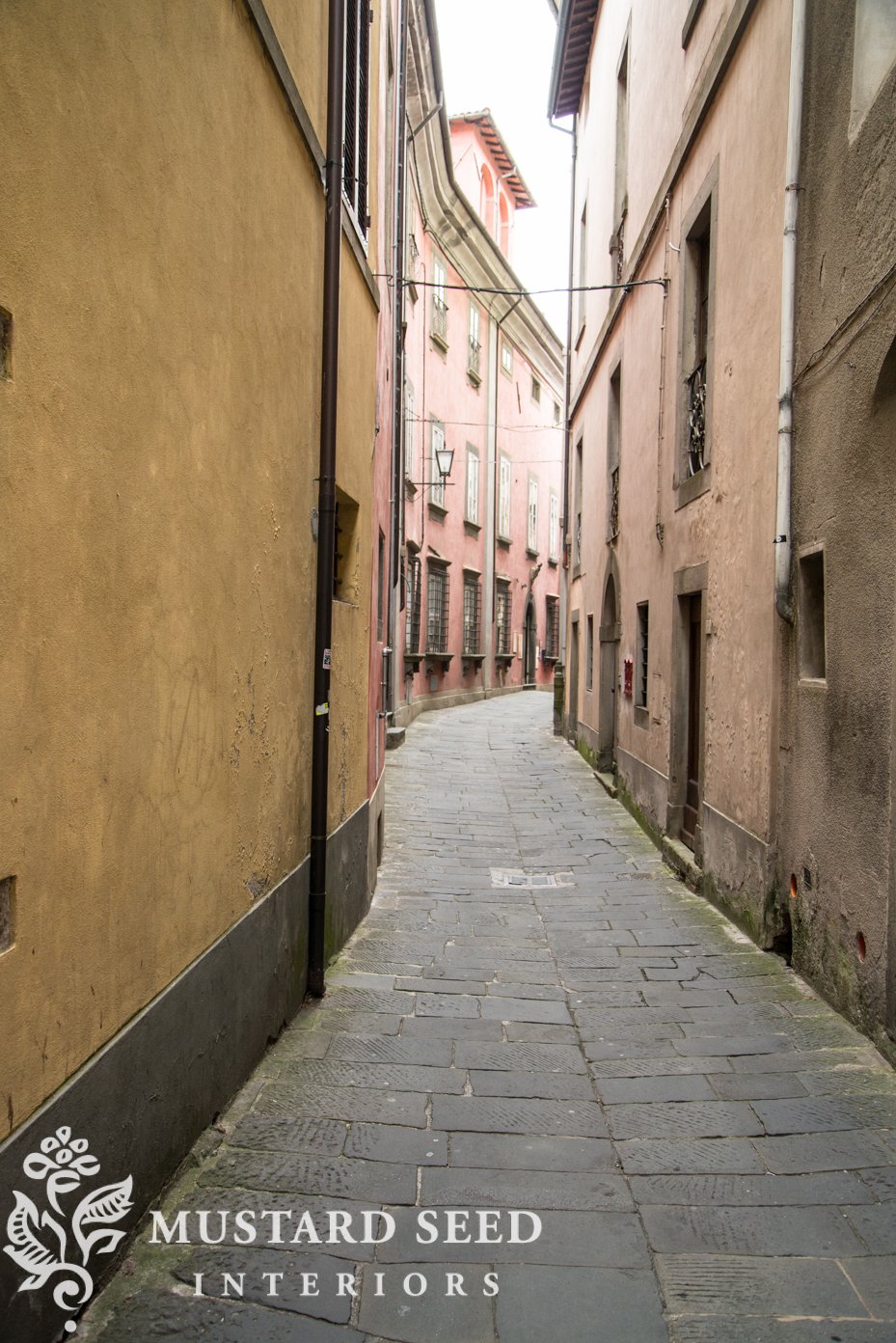 This ancient home, Casa Cordati, was the meeting place for our creative retreat – Inspired in Tuscany. 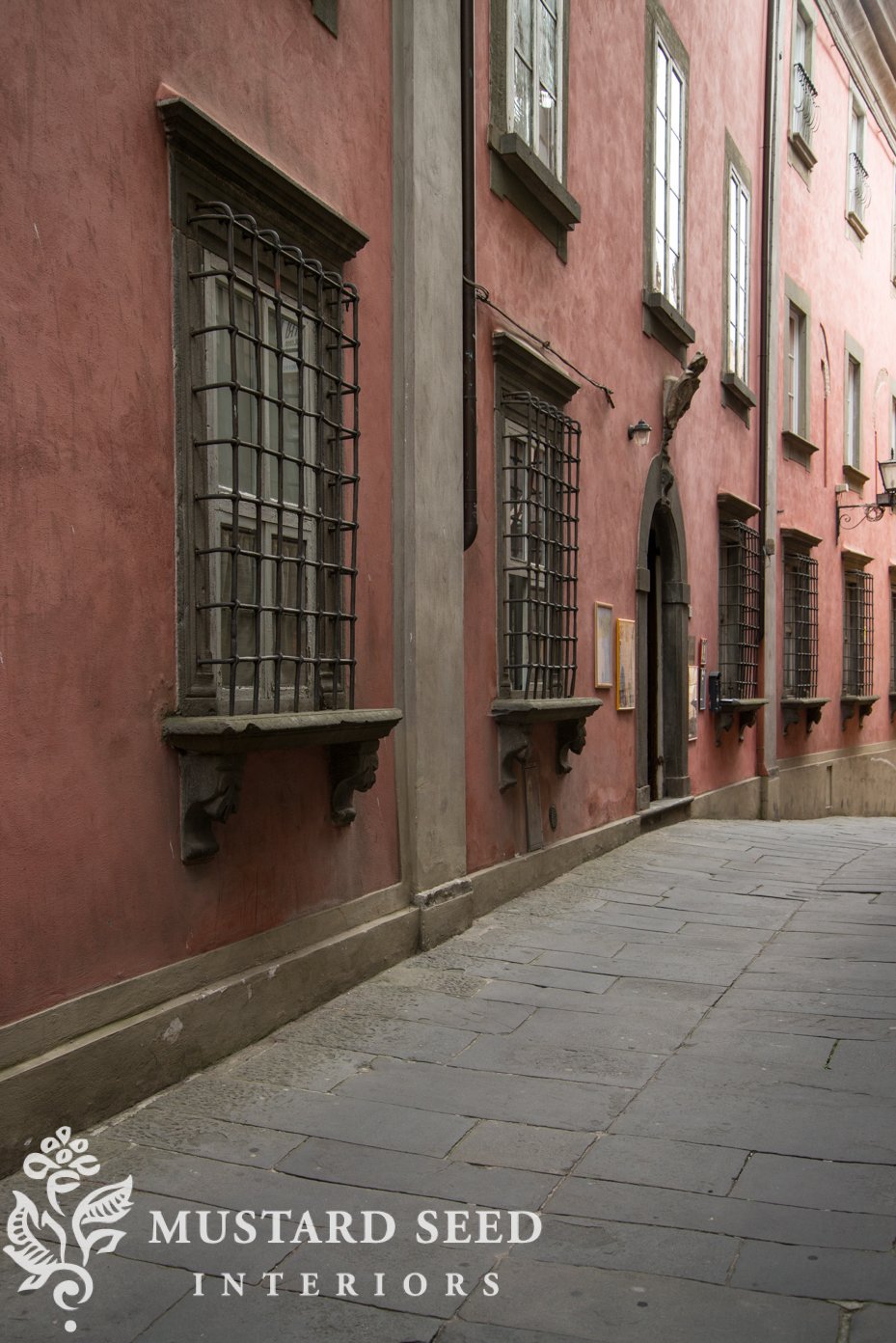 I’ll show you more pictures of Casa Cordati and tell you some of its story in another post, but I do need to take a minute to paint the picture of how this hutch came into our hands.

The furniture painting session was scheduled for the next day and she still wasn’t sure which piece would come through, but an old hutch found in the attic of Casa Cordati was the front-runner.  The owner of the piece (and the house) was Giordano and he was skeptical about handing a piece of furniture over to a group of American women.

But, Dana is a laid-back smooth talker who assured him the piece would be in good hands.  Besides, it’s been languishing in an attic for decades and we could at least clean the inch-thick layer of dust off of it and fix the broken trim.

I don’t know if he was really sold on the idea or just couldn’t say no to Dana’s charms, but we ended up pulling the piece out of his attic and brought it down to our workshop space. 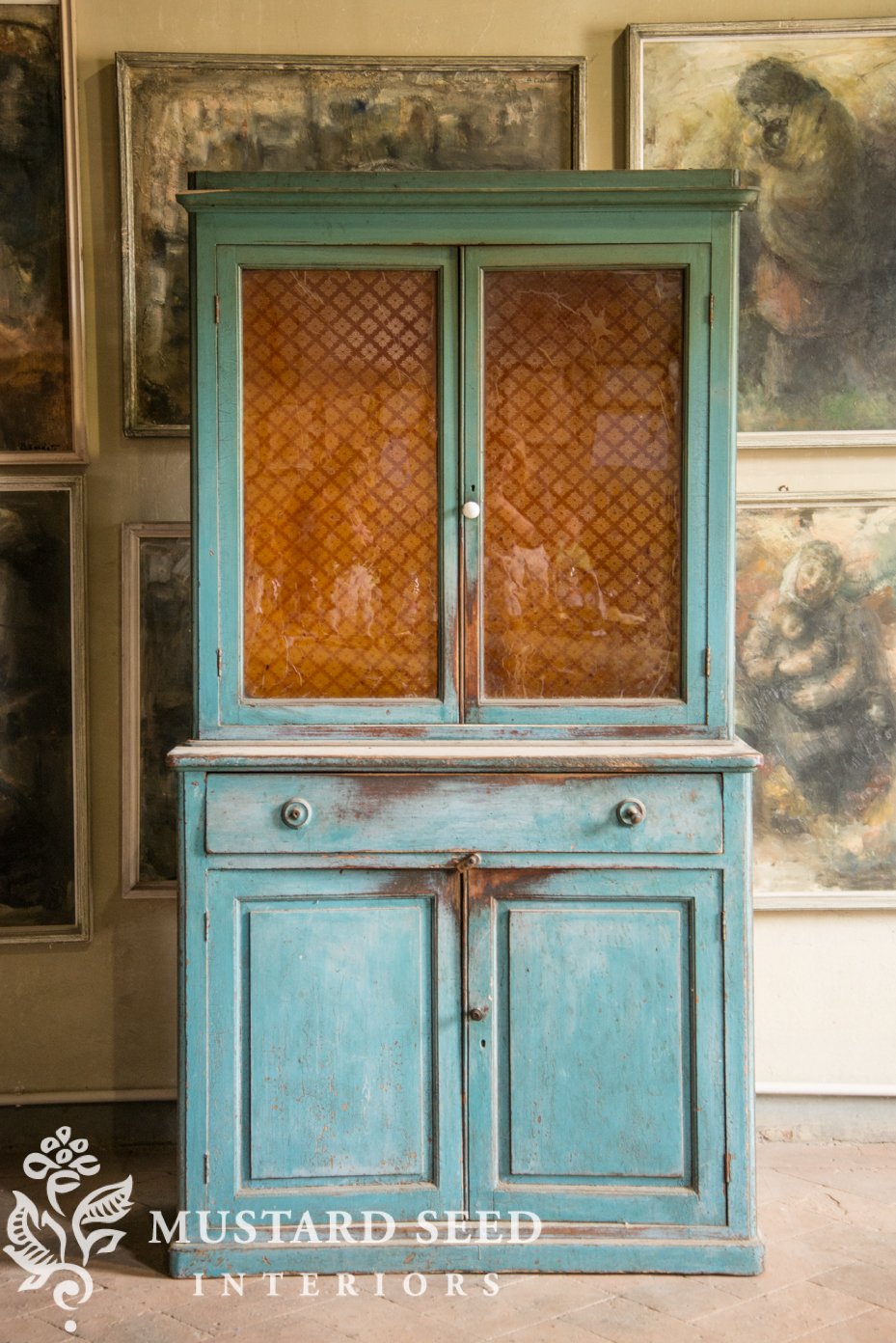 We had talked about painting this piece, because that is what we were here to do, but not one of us had the heart to paint over that perfectly-worn blue/green paint.  The interior, however, was a dingy cream and needed a refresh.  The old paint also needed a good cleaning and a rub down with Hemp Oil would enrich the color and bring out the luster of the exposed wood. 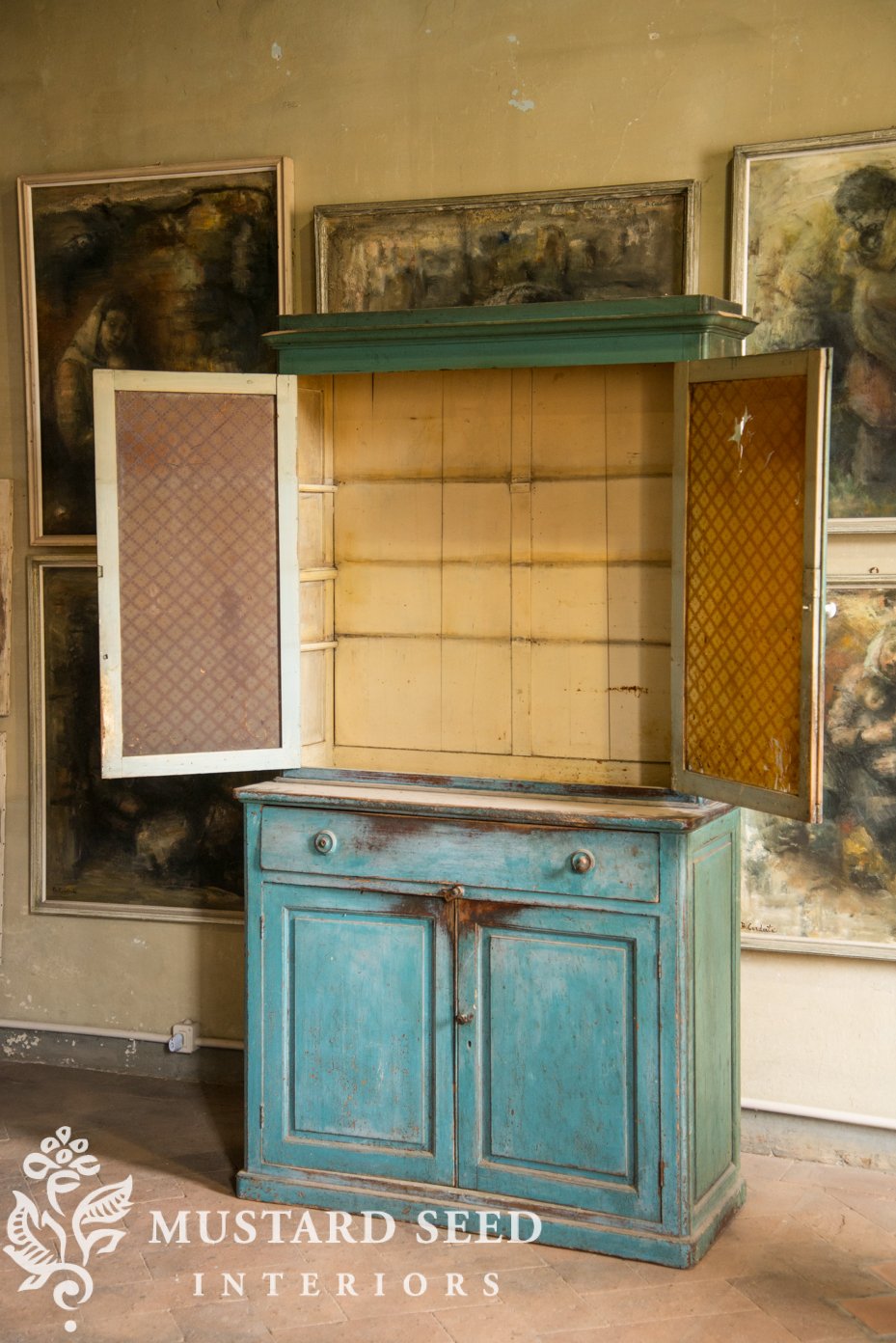 The women in our group, comprised mostly of MMS Milk Paint retailers, went straight to work like a well oiled machine.  For the sake of stability and dividing and conquering, we separated the top from the bottom.  One team worked on cleaning and Hemp Oiling and another worked on painting the shelves and interior. Women buzzed around the piece with brushes and cloths and Giordano hovered in the doorway, biting his lip, watching us at work. 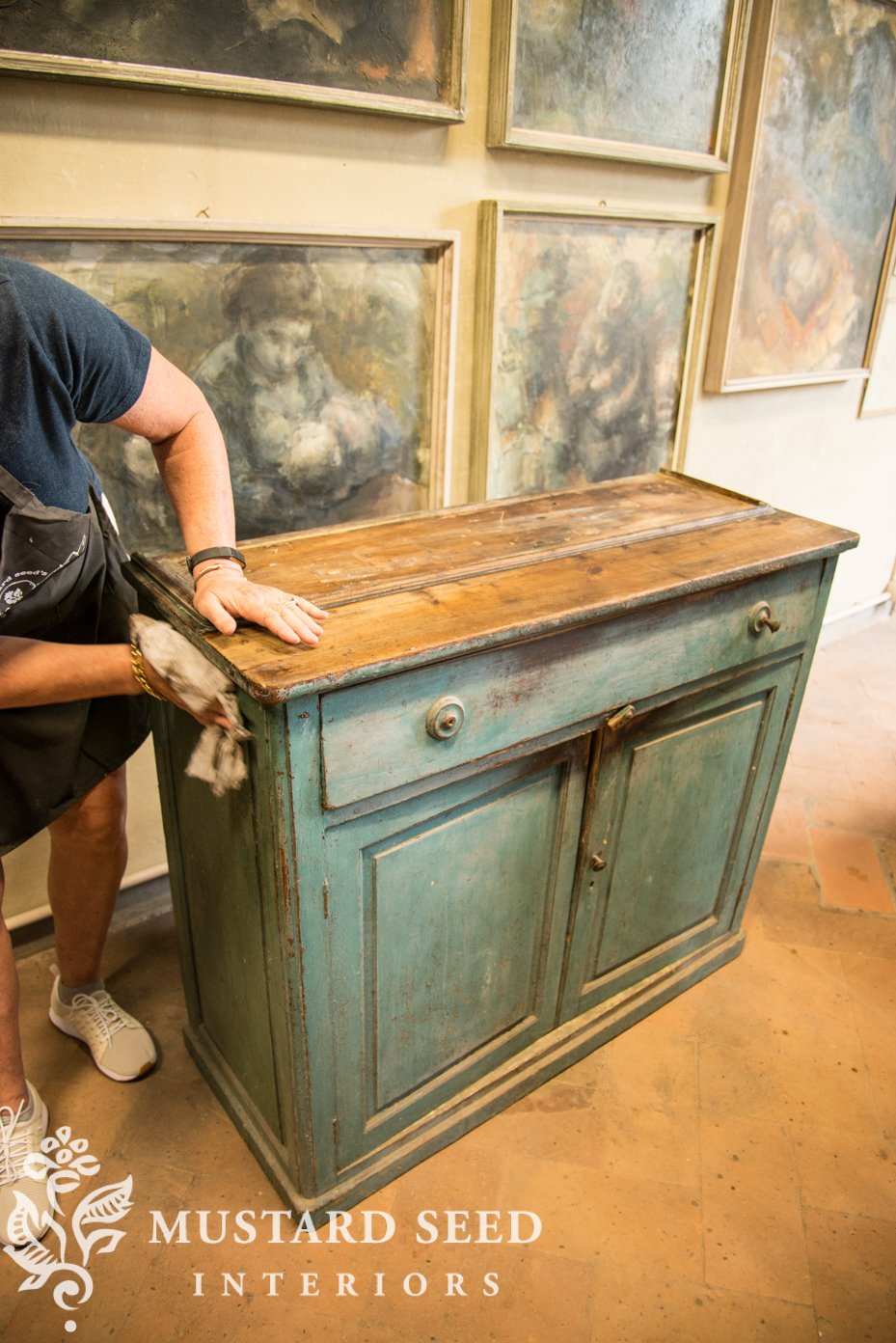 At one point, we realized the “rags” Giordano gave us to clean and oil the piece were actually an antique monogrammed tea towels!  Ah!! 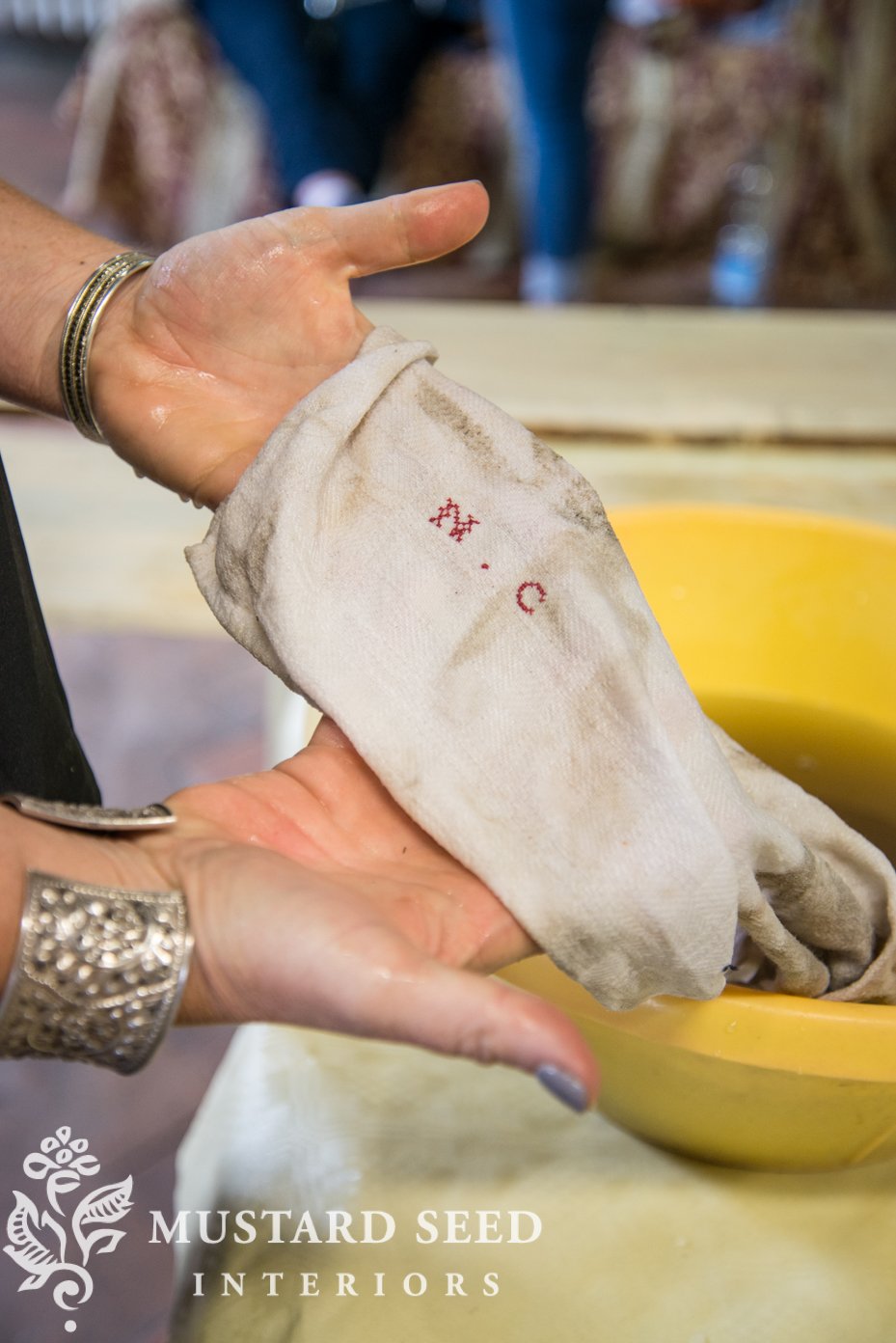 We saw a similar thing in a thrift store we visited – stuff that would be sold for good money in an antique store in the US was just “old stuff” here in Italy.

Anyway, once cleaned (with antique monogrammed tea towels, sigh), the old wood and paint received a nice massage with some Hemp Oil. 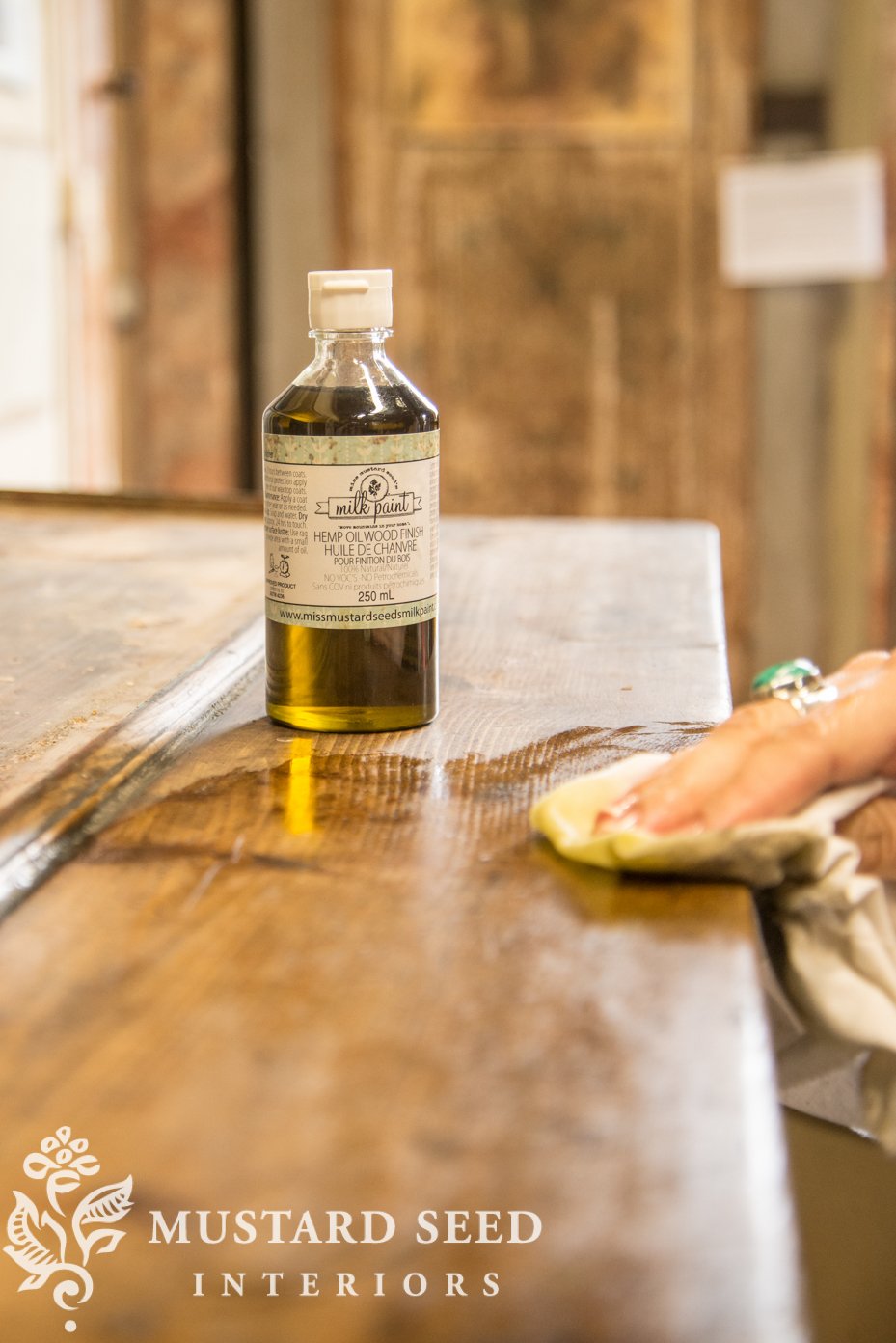 Meanwhile, the interior and shelves were getting a couple coats of MMS Milk Paint in Mustard Seed Yellow.  I can’t tell you how thrilling it was for me to see how far this milk paint line has come over the years.  I never would’ve guessed I’d be in an ancient walled city in Tuscany, working on a piece that was hundreds of years old with a group of talented women who sell my products. 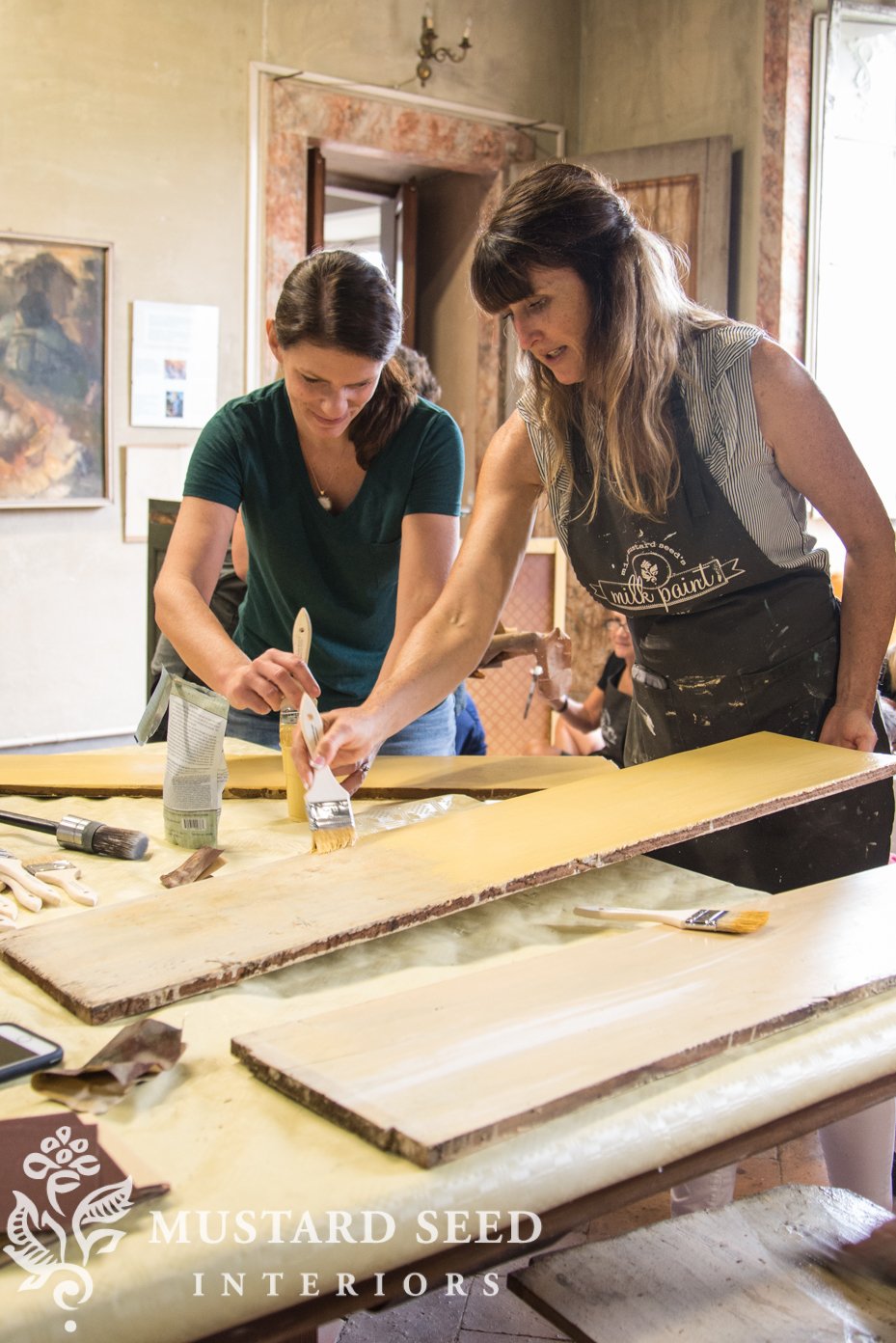 Anyway, we chose Mustard Seed Yellow for the interior, because it would compliment the exterior paint color and it would work with the contact paper on the glass doors.  Now, trust me when I say that we really wanted to peel that paper off, but it was basically baked on.  Several of us took turns picking at it to see if it was possible, but it would take days to get that glass cleaned and we just didn’t have that kind of time.  We had to work with it. 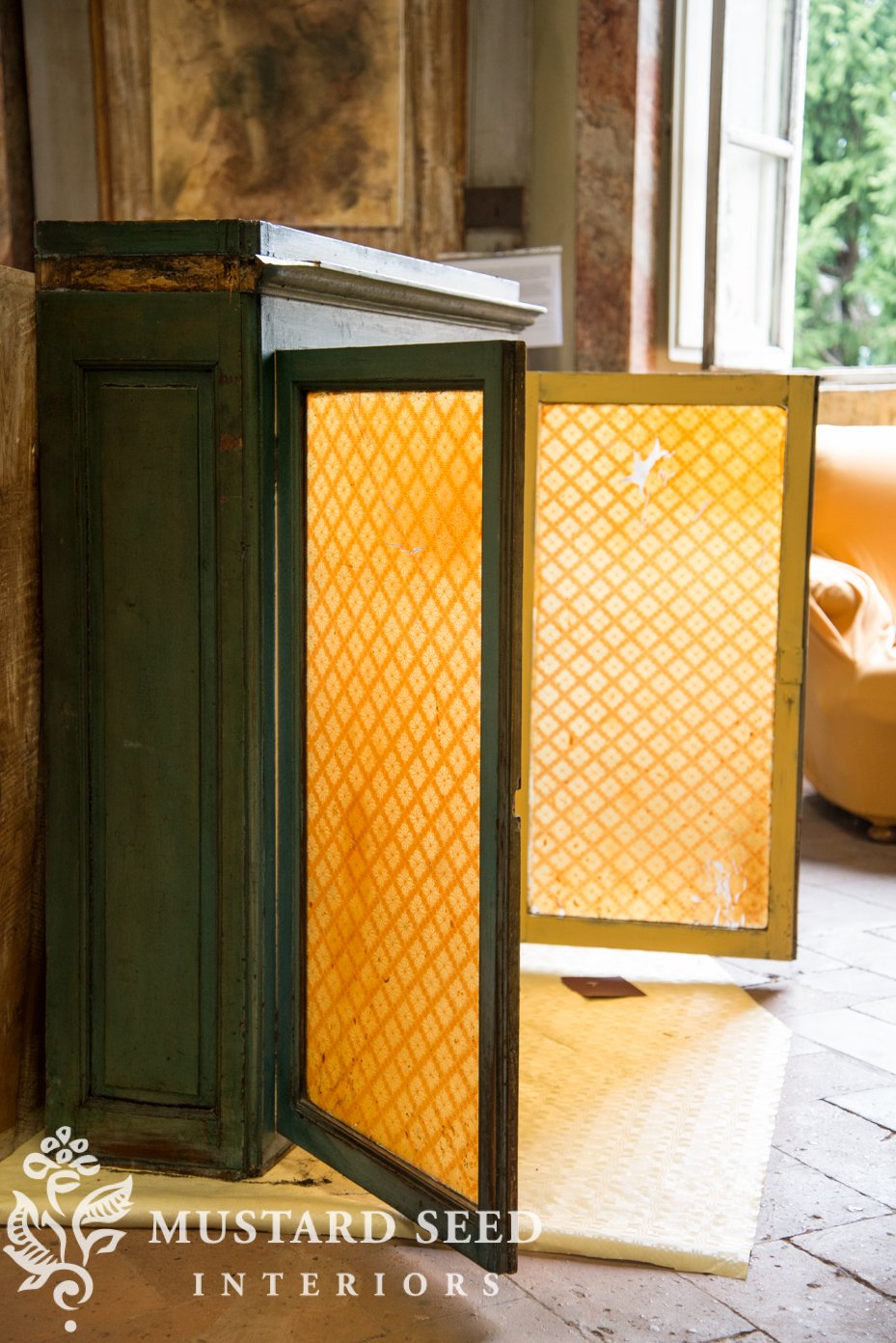 It was about this time that Giordano popped back into the room and smiled approvingly at the work we were doing.  From someone who rarely smiles, this was a huge victory!  He told Dana the color we picked was historically accurate and perfect for the piece. 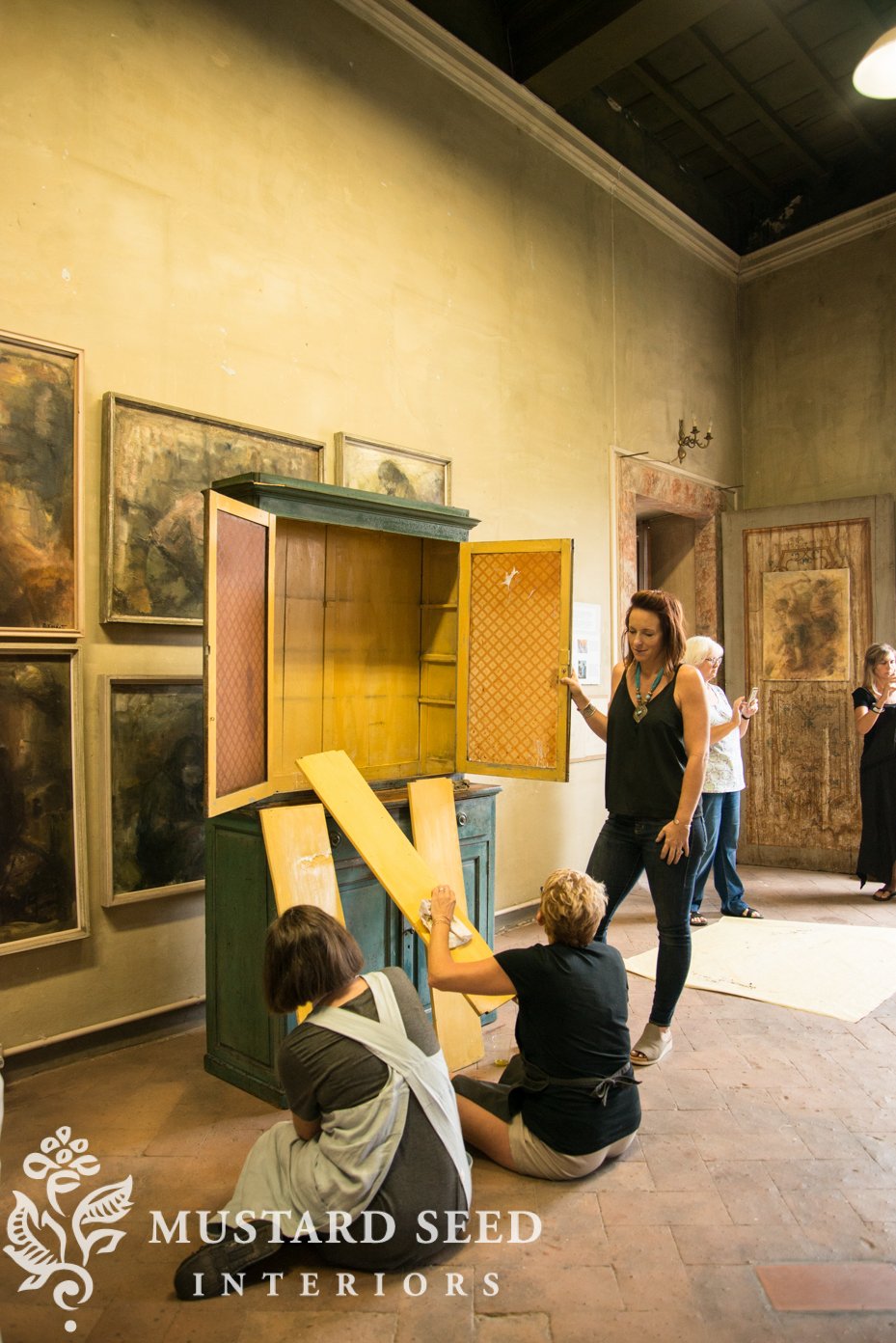 And here is how the hutch looks all spruced up… 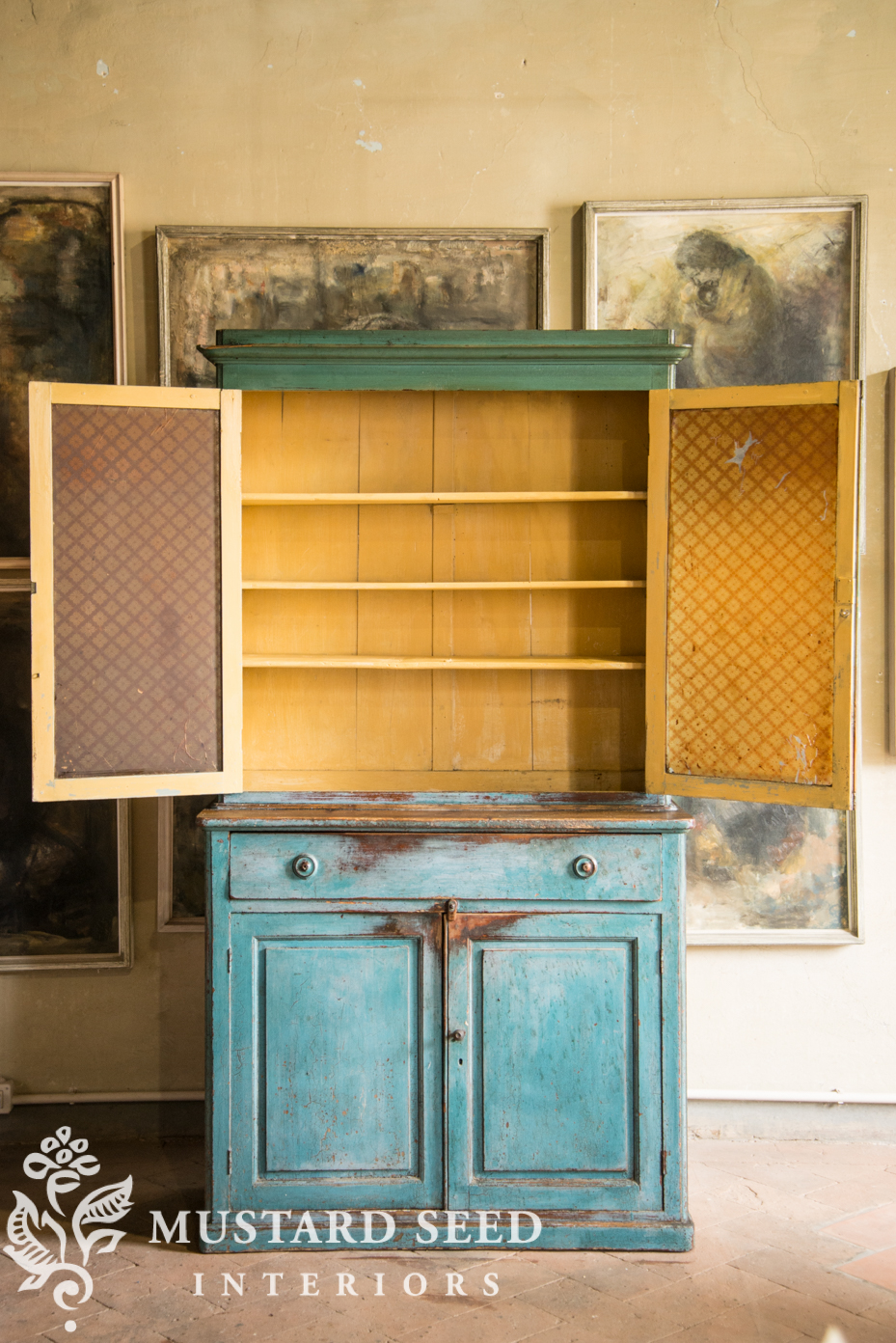 A couple of girls even worked on repairing the broken trim pieces.  The hammer Giordano gave us to work with must’ve been over 100 years old!  It was certainly an experience.

The yellow interior really pops now and the old paint and wood have a new glow. 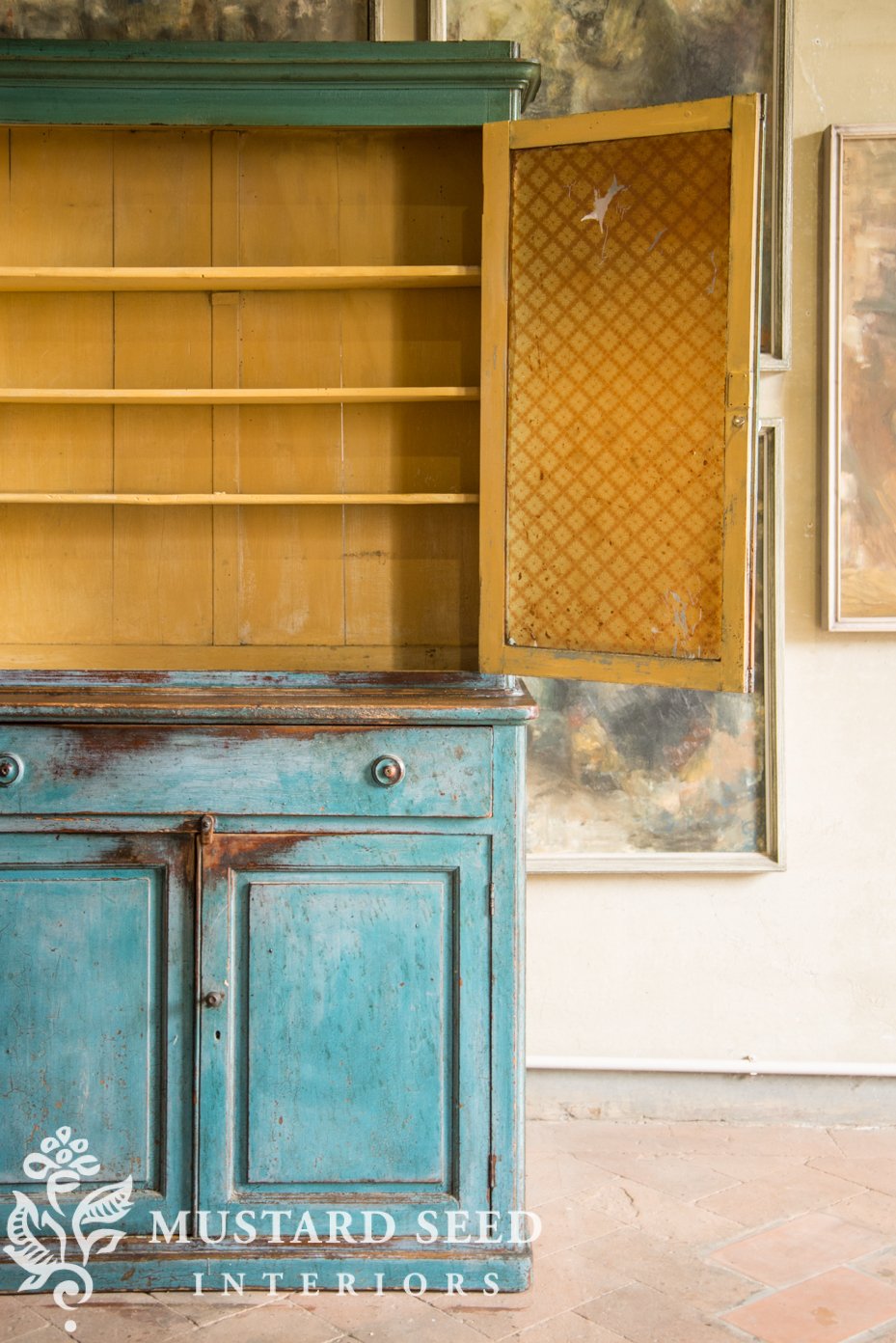 My favorite part about this makeover is that this piece doesn’t look like it was freshly painted.  We didn’t smother this old hutch with with a thick layer of shiny paint to hide its age and flaws.  We allowed it to be old and just made it look its best. 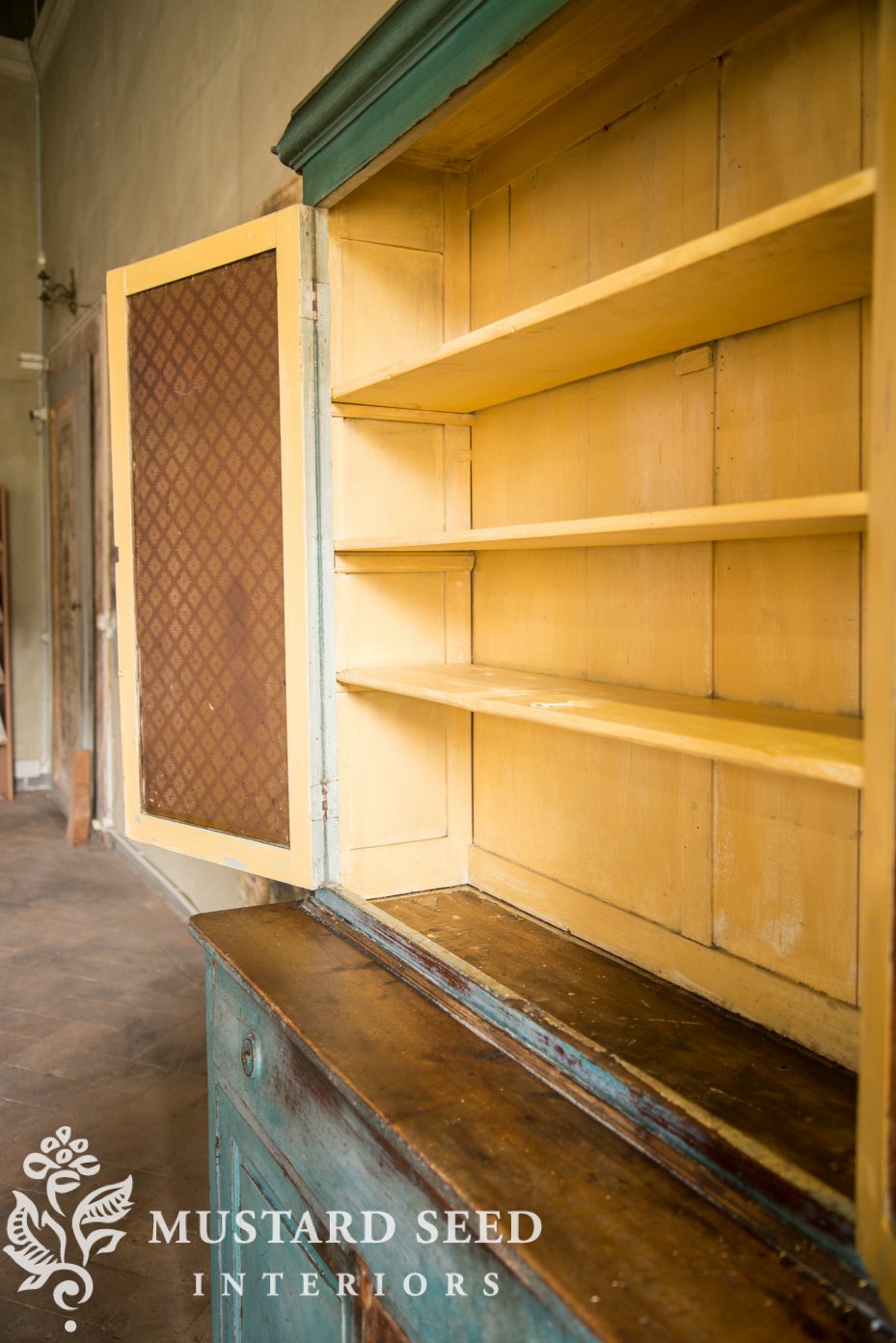 We even cleaned up the inside of the base cabinet and painted the shelf to freshen it up. 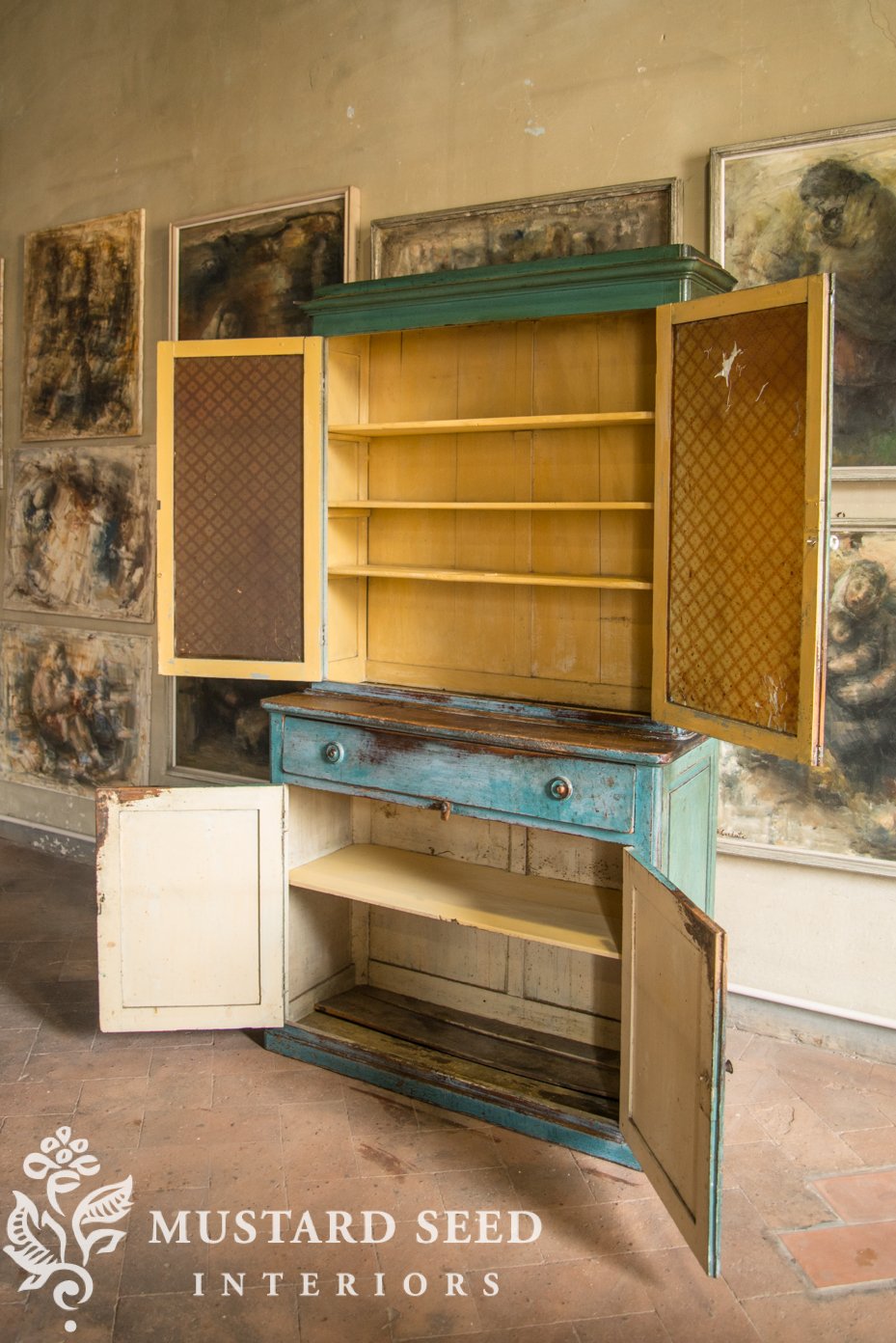 Giordano was so excited about it, he asked if we would move it to a new place in the stairwell.  This hutch was too good for the attic now. 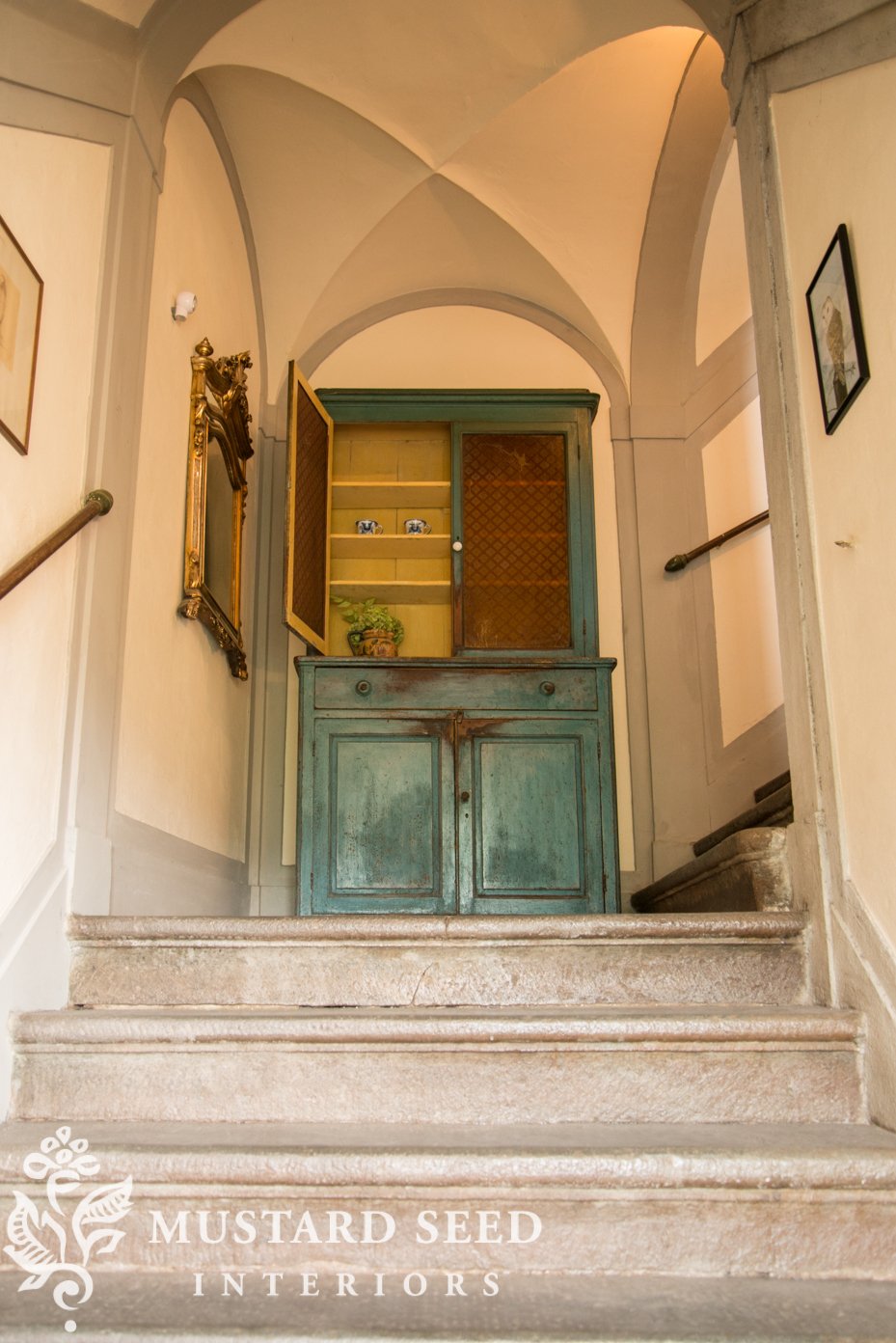 We were all thrilled with how it turned out and, most important of all, Giordano loves it. 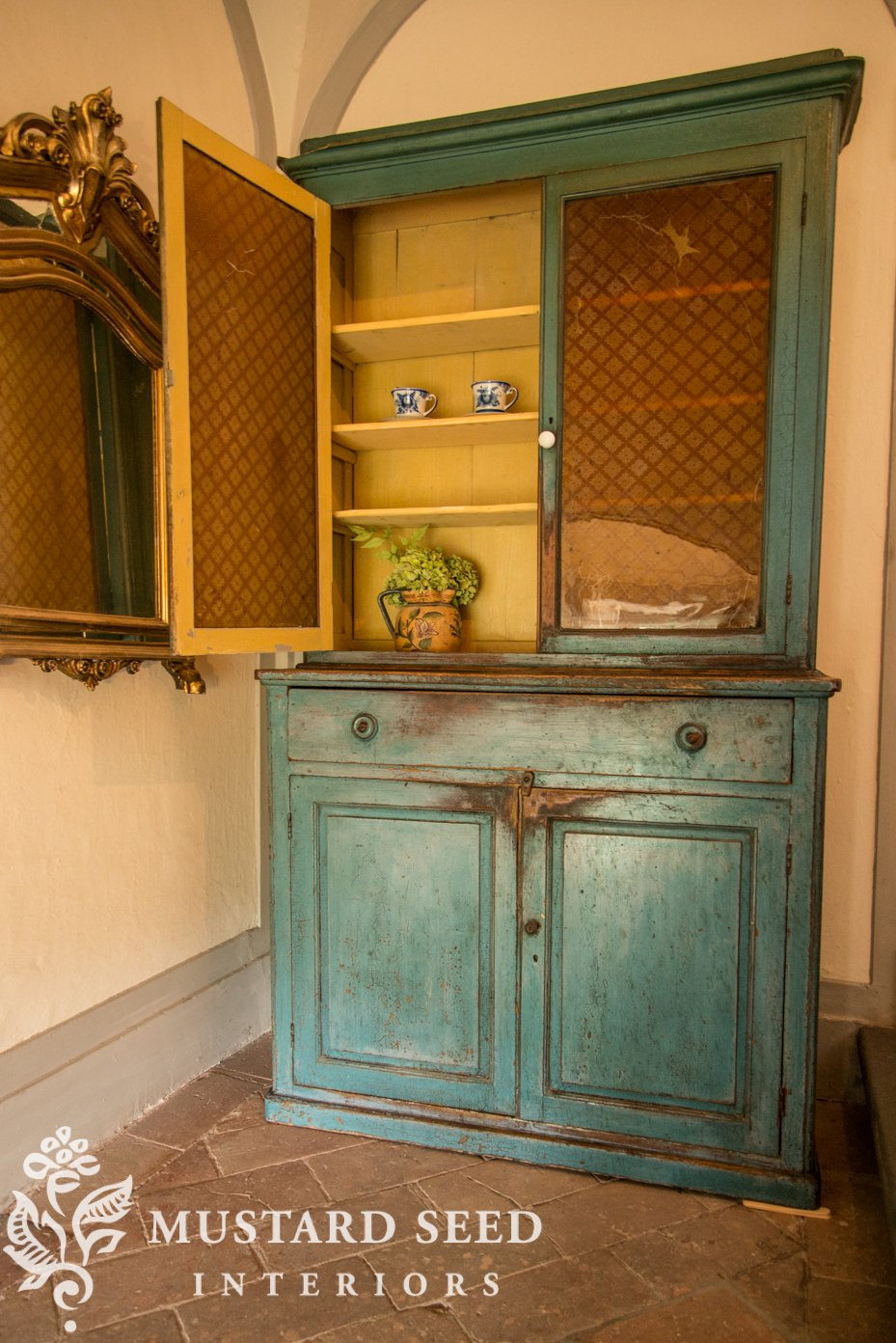 There is something special about doing an activity you love, like painting a piece of furniture, in a foreign place.  You have the opportunity to fill the space you temporarily occupy with a part of who you are and something you’ve done hundreds of times before, becomes new and exciting.  A task that most of these women do regularly for their businesses, was anything but mundane.  It was enriching and satisfying and gave life to our creative souls. 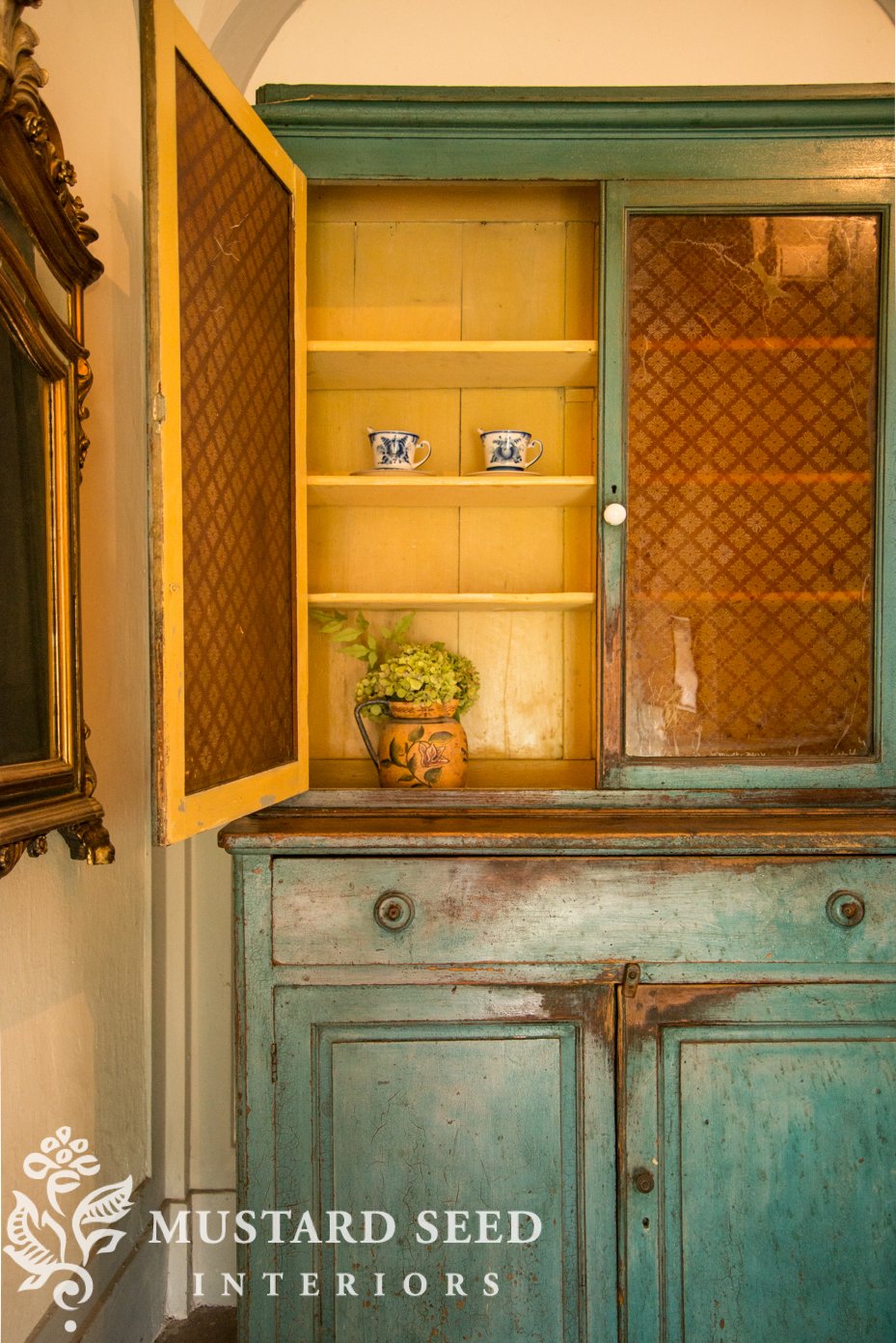 Among all of the dressers and hutches and tables that are bought, painted, and sold, this is one of those pieces that will not easily be forgotten.