I said I was going to hang the postal sorter on the wall to gain some space on the table, so I did just that!  Well, I say “I”, but Jeff actually did it for me.  I did take everything down, tell him where I wanted it hung, and then put everything back, so I was a participant!  He’s just better at hanging things than I am, given that he’s a perfectionist and, basically, a human level.

It was a small change, but those few inches of table that I gained makes a big difference in the functionality of the space.  I can put so much more on the table now and I have unobstructed access to the cubbies. 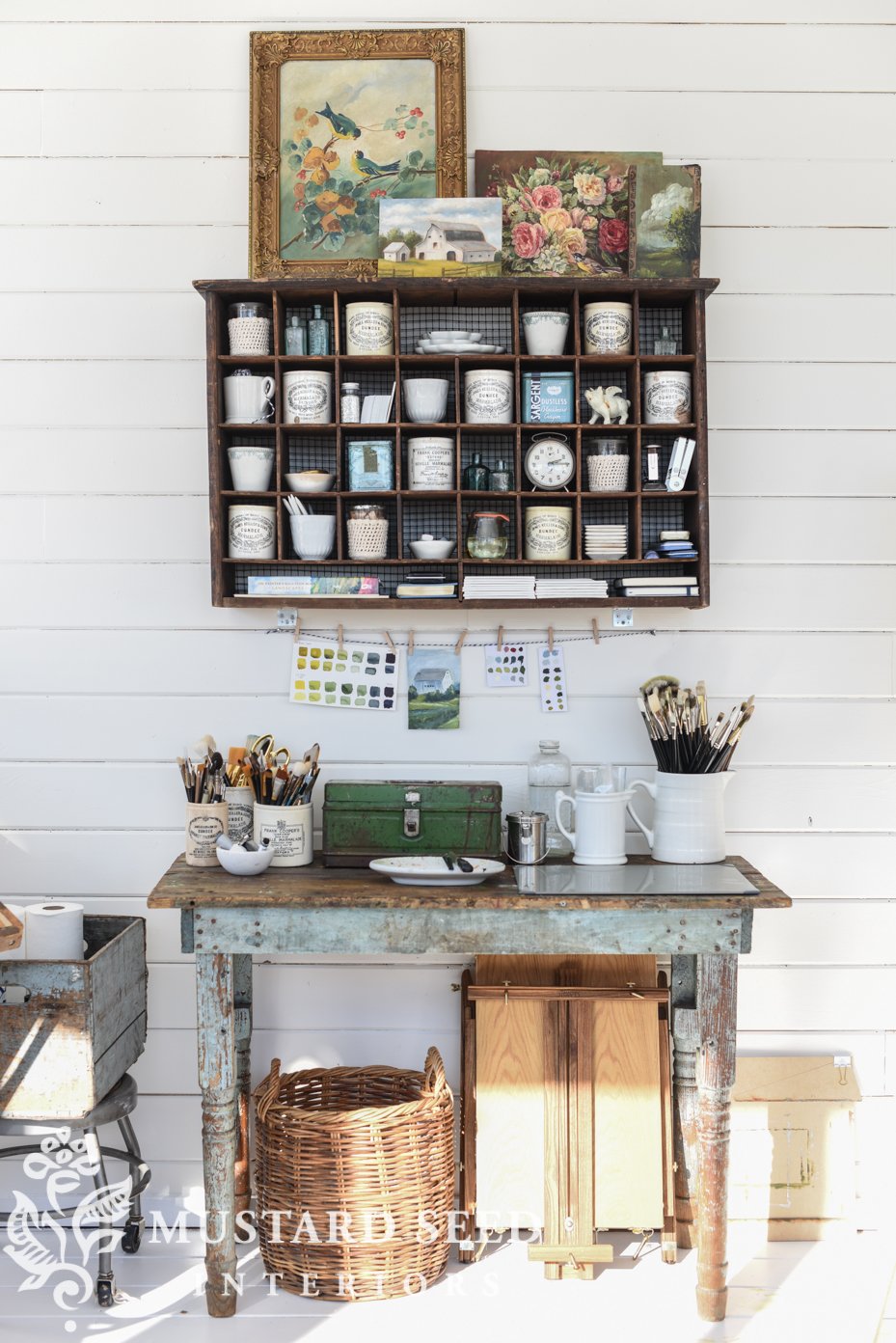 I was able to make better use of the lower cubbies, since they weren’t blocked.  So, I filled them with some small canvases, water color palettes, sketch books, etc. 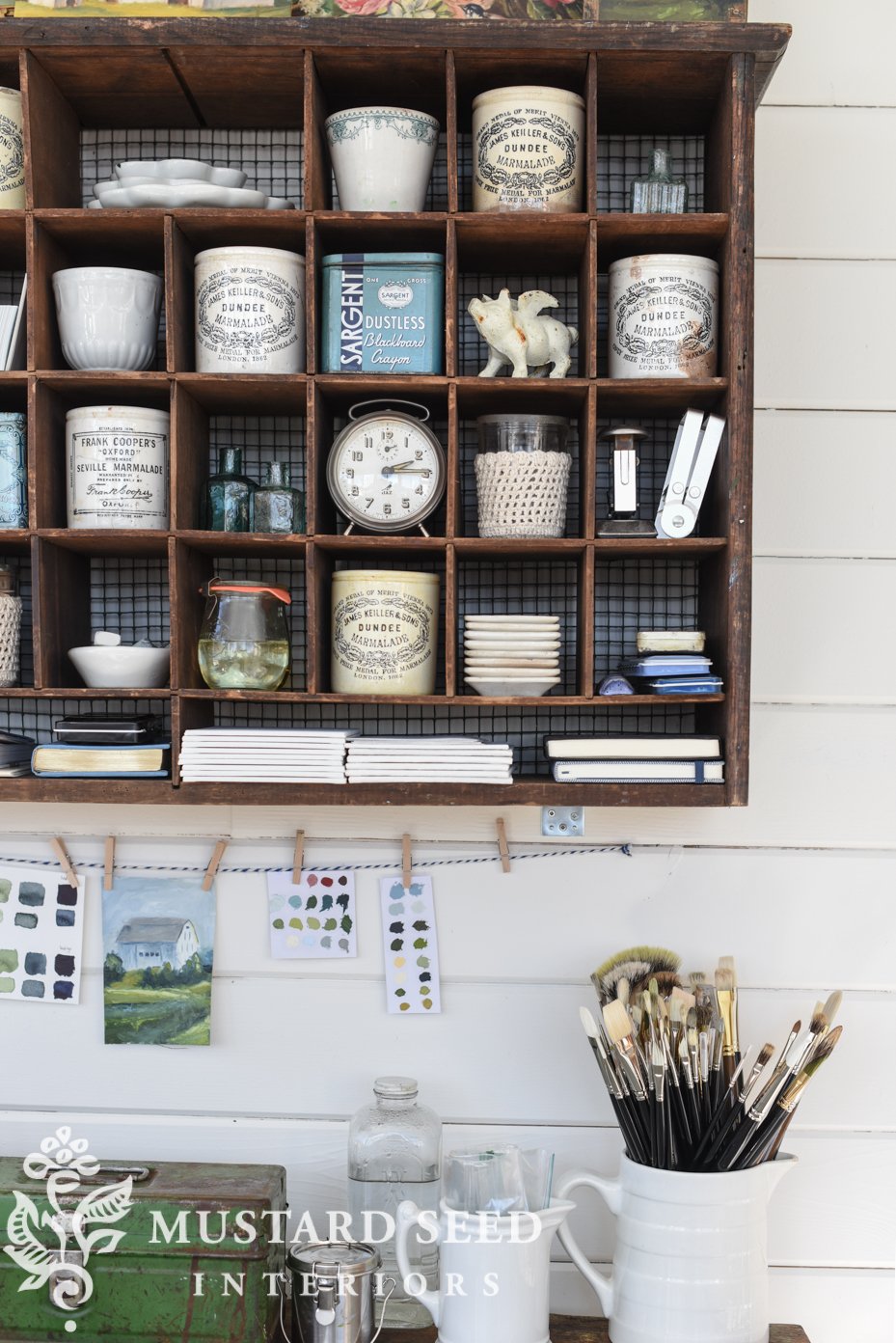 We hung the shelf using L brackets on the top and bottom.  Since the wood is old, and therefore more prone to splitting, this was the most secure way to hang it. 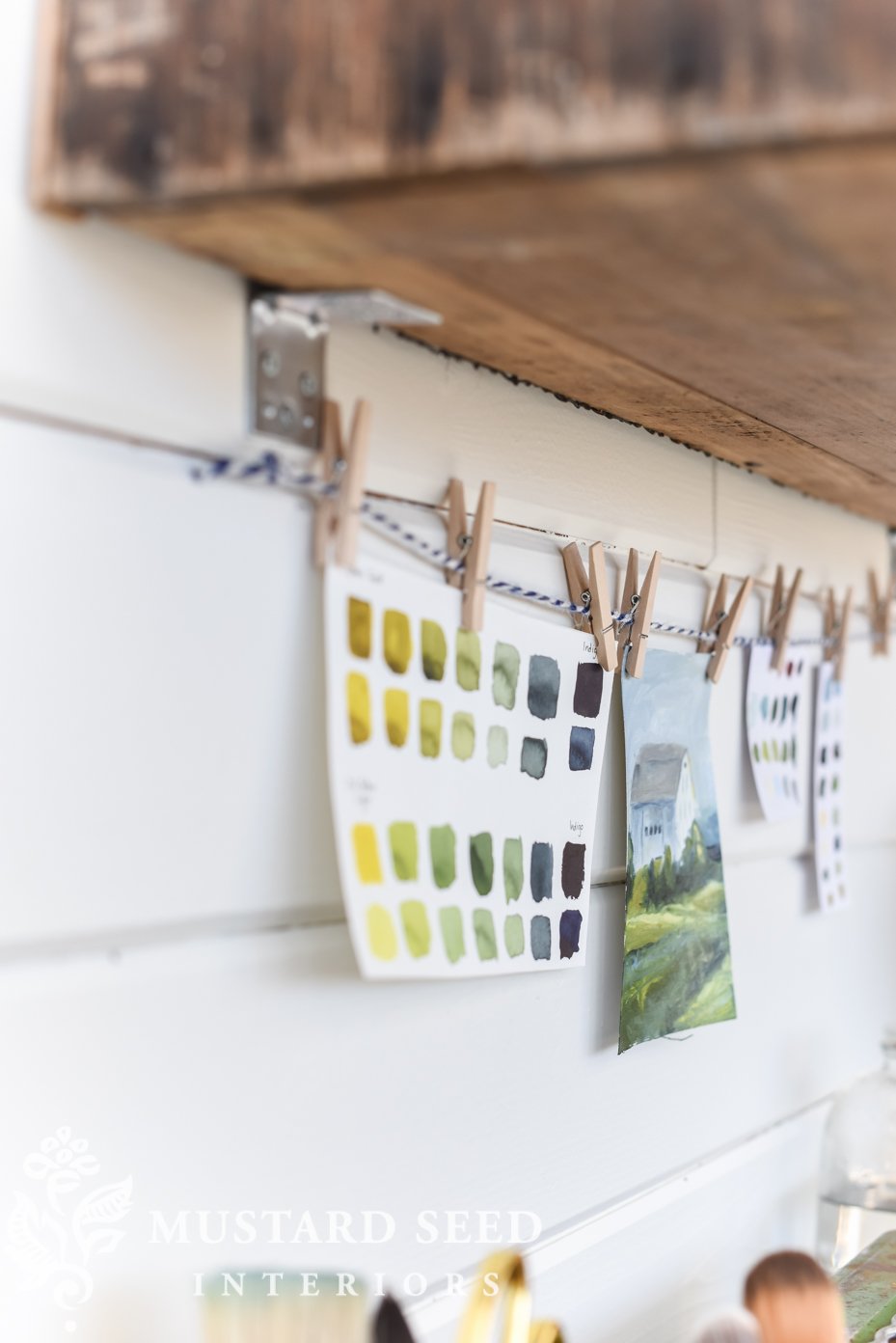 I wanted to hang it high enough, so I could fit my brushes underneath, but we ended up hanging it just a tad too high, so there was an awkward (to me), empty space.  I immediately thought a tack strip or magnetic strip would be perfect.  I could tack up inspiration pictures, small color swatches, etc.  I hopped online and found some white magnetic strips that would work perfectly, along with some plain, metal magnets.  The cart total was only $18, but I hesitated.

I caught what I was doing.

I was ready to buy something before I took stock of what I already had and put good, old fashioned resourcefulness to use!  There was a time when resourcefulness was all I had to make improvements in my home.  That resulted in all sorts of crazy, but pretty great ideas.  Well, some crazy and stupid ideas, but there were things that worked out great!

So, I emptied my cart and went back into the studio to see what I could come up with.  When I scanned the room, the “clothes line” strung along the window caught my eye.  I can do that!

I just tapped a couple of nails into the wall and strung some blue & white twine between the two.  I used some mini clothespins to clip things up.  It looks much cuter than a magnetic strip and I saved $18. 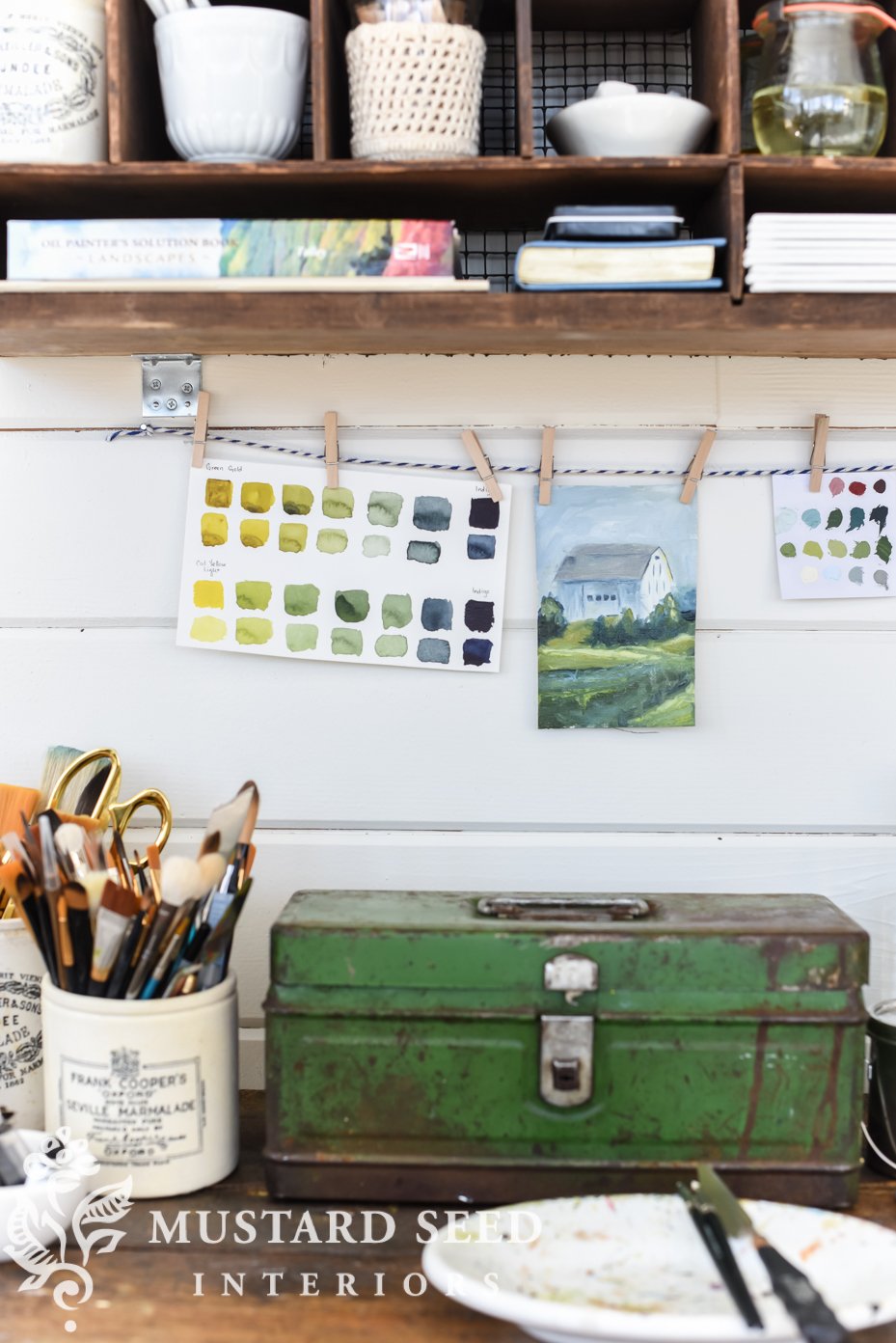 I was kicking myself a bit, though.  Why was my first reaction to buy something?  I’m glad I had this moment, though, so I can make a point of practicing my resourcefulness and buy something when it makes sense, not as a default. 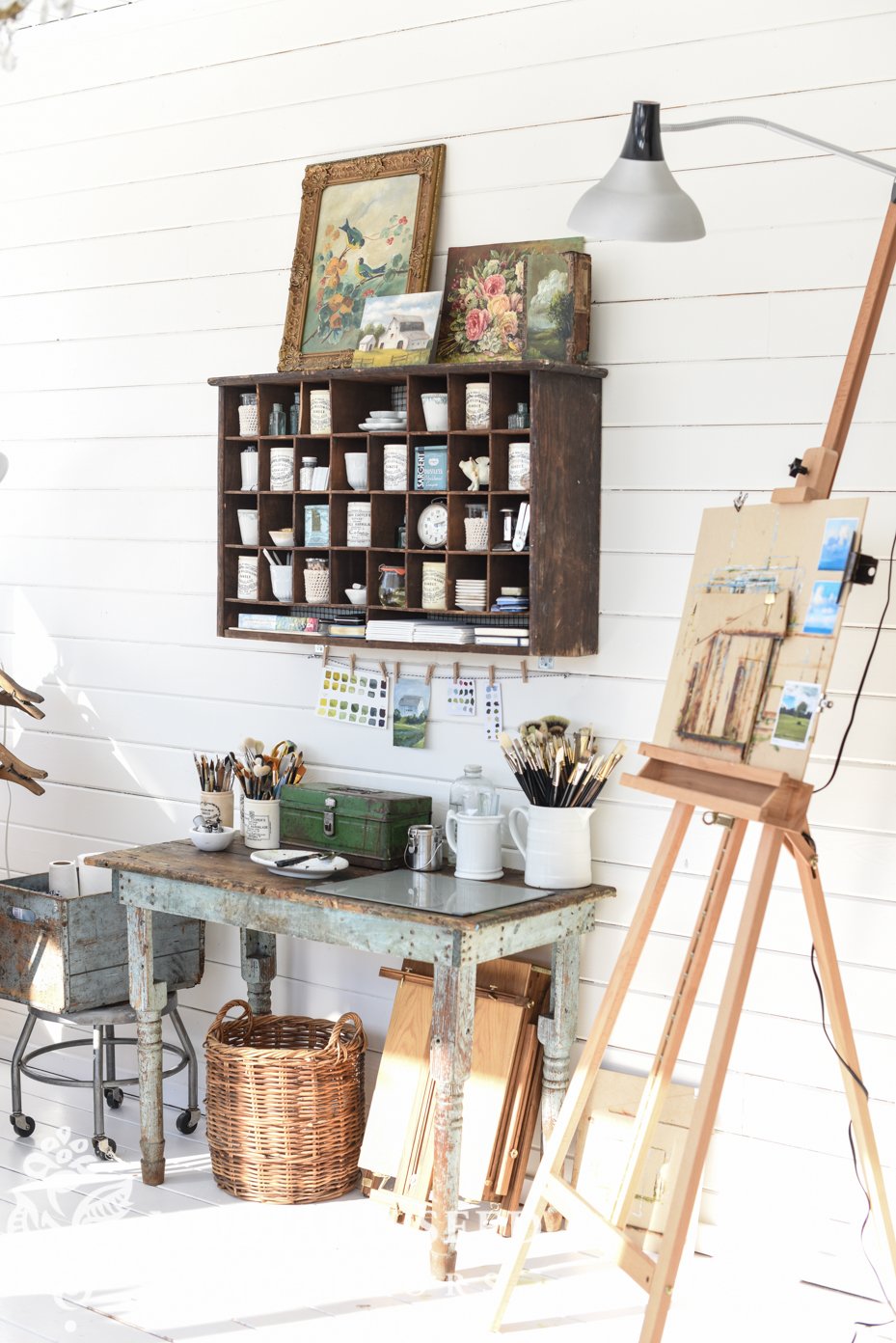 I still need to move things around, but it’s coming along.

I also made a small update to the cabinet on the back wall.  I put an antique basket up top and a crock.  It just adds some nice texture. 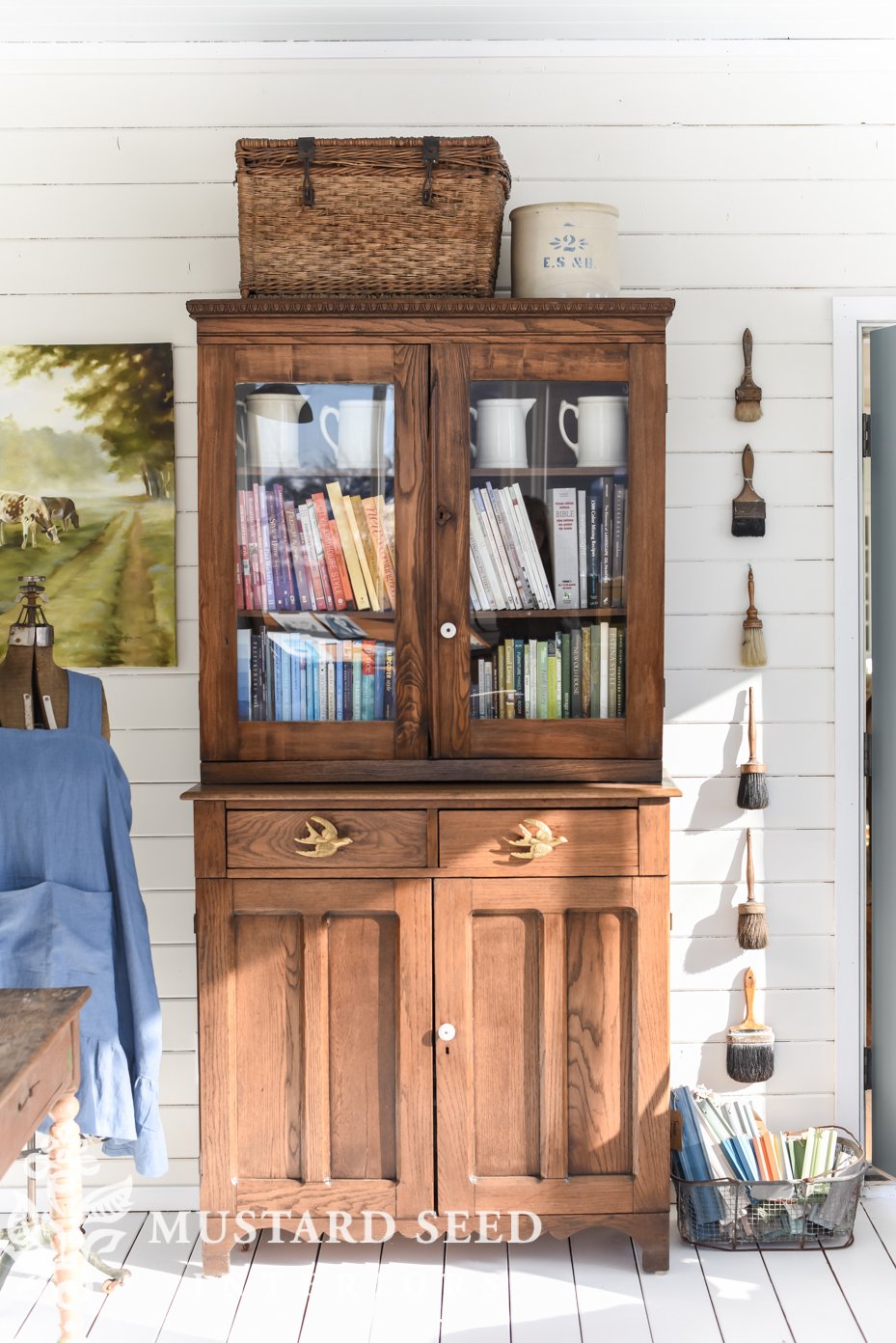 And, speaking of purchasing things, I bought a pastel storage case last week.  I had been looking for one for a long time, because my pastels were all in separate boxes, which was cumbersome to use and hard to even see what colors I had or compare values.  I haven’t bought one, though, because they seem to either be cheap (and cheaply made with lukewarm reviews) or very expensive.  By very expensive, I mean $250 for a small case.  I love art supplies, but I’m just not there, yet.

I found one that looked great, but it was $39 and the reviews were good, so I ordered it.  It arrived and I eagerly arranged my pastels in it.  It looks glorious and there’s plenty of room to grow. 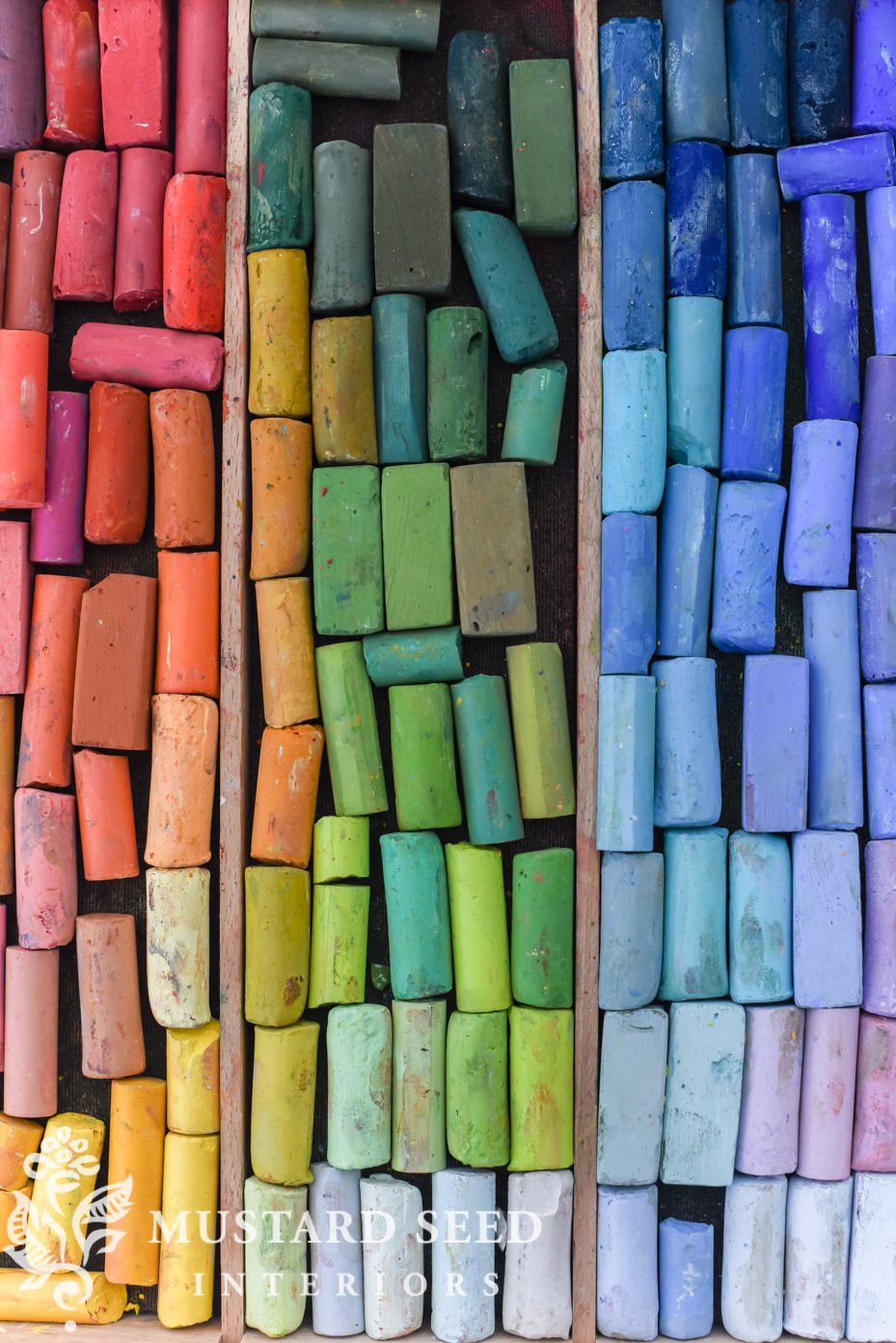 But, the panels that lock into place to don’t hold the pastels in tight enough, so they start to shift and roll around, some even hopping into the next “lane”!

So, now it’s back to looking for other options. 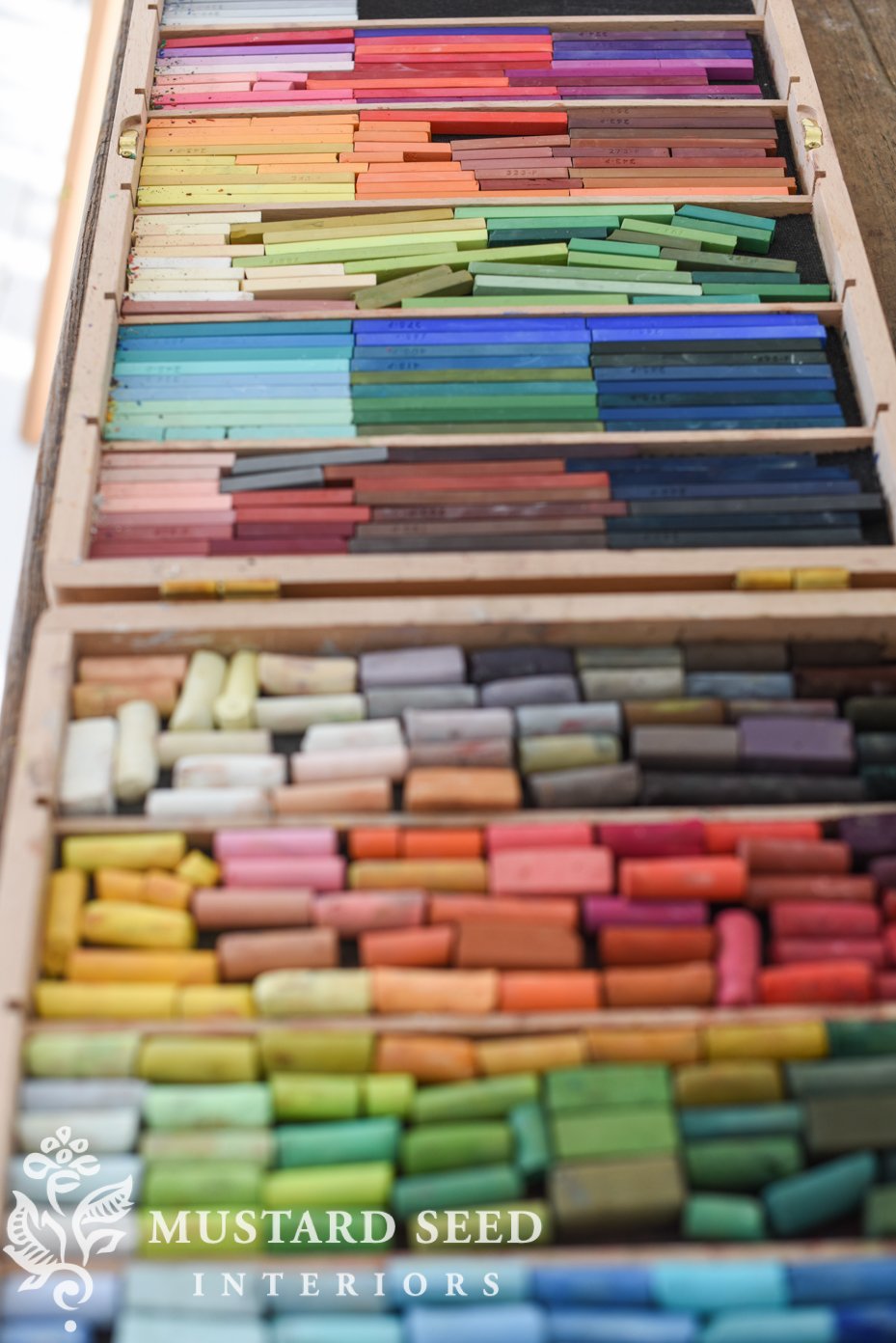 I have been looking at some homemade box options, makeup storage, cutlery trays, etc.  We’ll see if my resourcefulness can turn up something great (and hopefully not stupid.)