This seems to happen every year.  I’m acquiring furniture and antiques to sell at the Lucketts Spring Market and the desire to change things up in my own home starts to brew.  Since I moved my business from my house to the studio, the furniture rearranging has really slowed down.  A lot.  It used to be a weekly occurrence, but it’s now a few times a year.  It’s not as easy to “try things on” as it used to be and I find that I get the “furniture shuffling bug” out of my system at the studio.

Jeff and my oldest son, Marshall, were sick this weekend, so my parents took Calvin, our youngest, to an Easter egg hunt and out to lunch to get him out of the house.  I was stuck inside, though, holding puke pots, administering medicine, taking temperatures and sanitizing everything the sick boys looked at.

When I wasn’t playing nurse, I got the itch to scoot things around in the family room.  It was impulsive, but I had been thinking about it for a while. 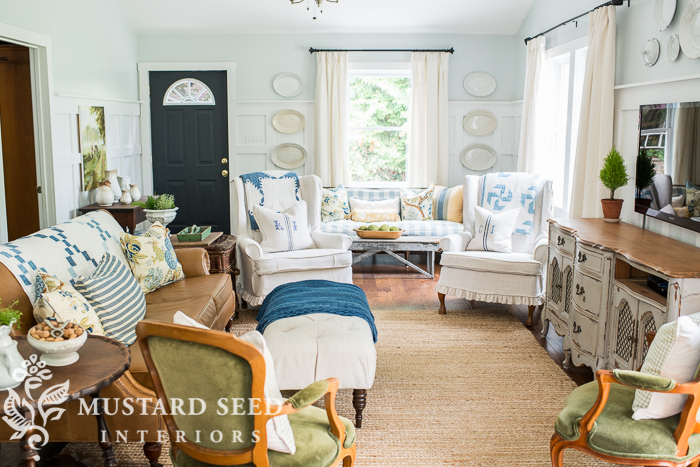 The family room and the master bedroom have been the most challenging for me.  Both rooms are long and narrow and tricky!  The family room has the added issue of traffic paths and lots of windows and doors.  There just aren’t many options for furniture placement and I’ve never been 100% in love with this room. 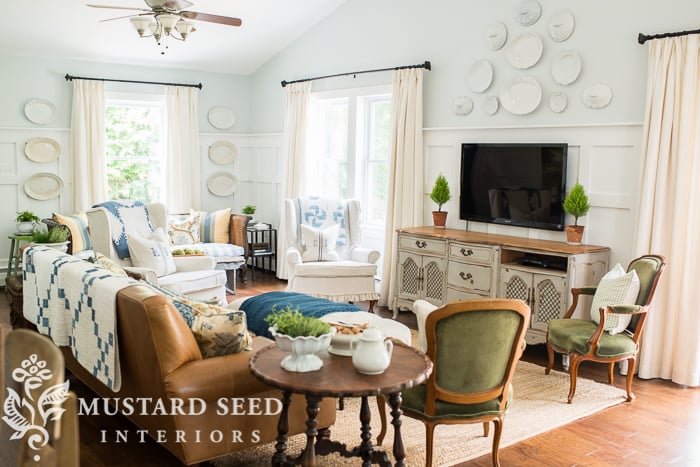 I spent some time looking at family/living rooms I pinned for inspiration on Pinterest.  I just sat quietly in the room and tried to look at it from a fresh perspective.

I already made the decision to sell the caned daybed (details at the bottom of this post) and we took it over to the studio last week.  Although it’s pretty comfy (with a full feather cushion), we don’t sit on it very often, so it really was just a big decorative item.  I figured I might as well sell it and bring the Ikea Ektorp sofa in from the studio.  It will be more comfortable, practical seating, which I’m seeing a need for when our family of four cuddles on the sofa for movie night.

And they are only going to get bigger!

I originally put the Ikea sofa under the window where the daybed was, but I decided to pull it out into the room, to make an “L” shape with the leather Pottery Barn sofa… 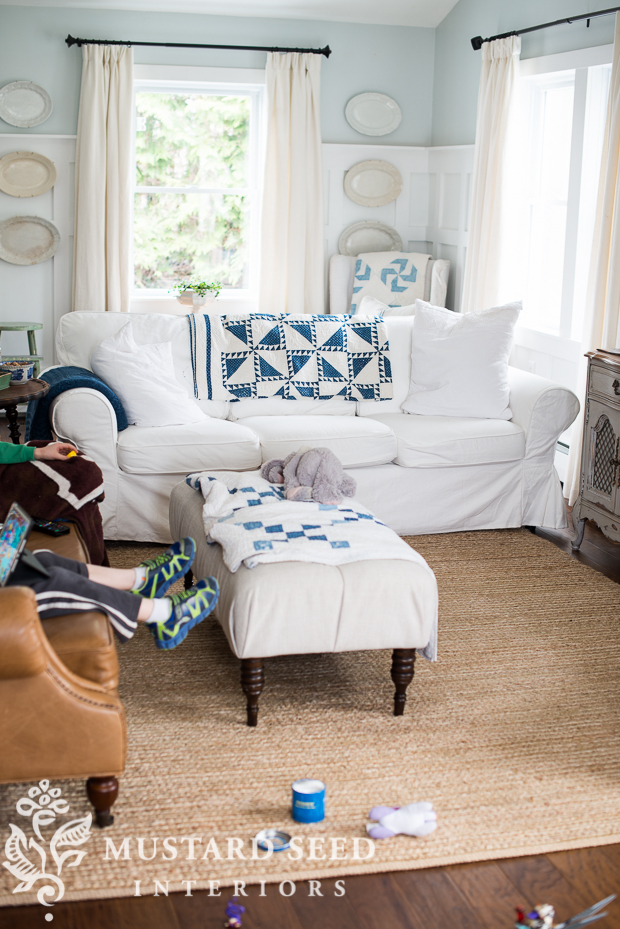 At first, I hated it.  I felt like it was too big and it cut the room up, but I’ve learned to leave things for a while before I make a judgement.  Marshall was curled on the sofa watching a movie as this was going on.  “Mommy’s just moving some furniture around for a bit, buddy.  Okay?”

I swapped around the end tables and nudged the sofas around until I felt like they lined up well.  The longer I left it that way, the more I walked around the room and viewed it from different angles, the more I liked it. 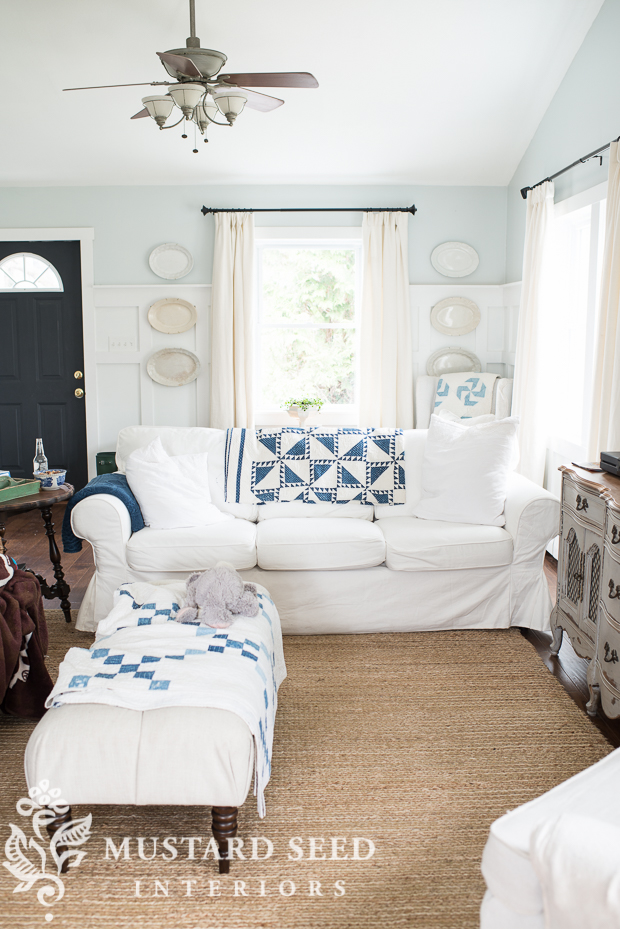 It looked comfy, cozy and more inviting and the fact that the sofa divided the long, narrow room was a good thing. 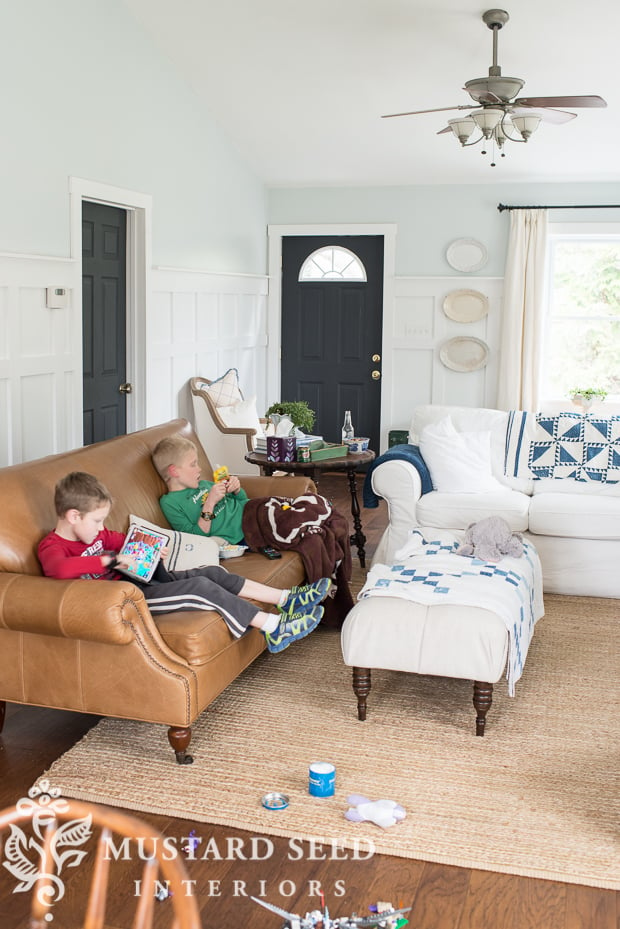 I originally thought the sofa entirely displaced the wing chairs, which I really want to keep, but one of them works well to the right of the TV… 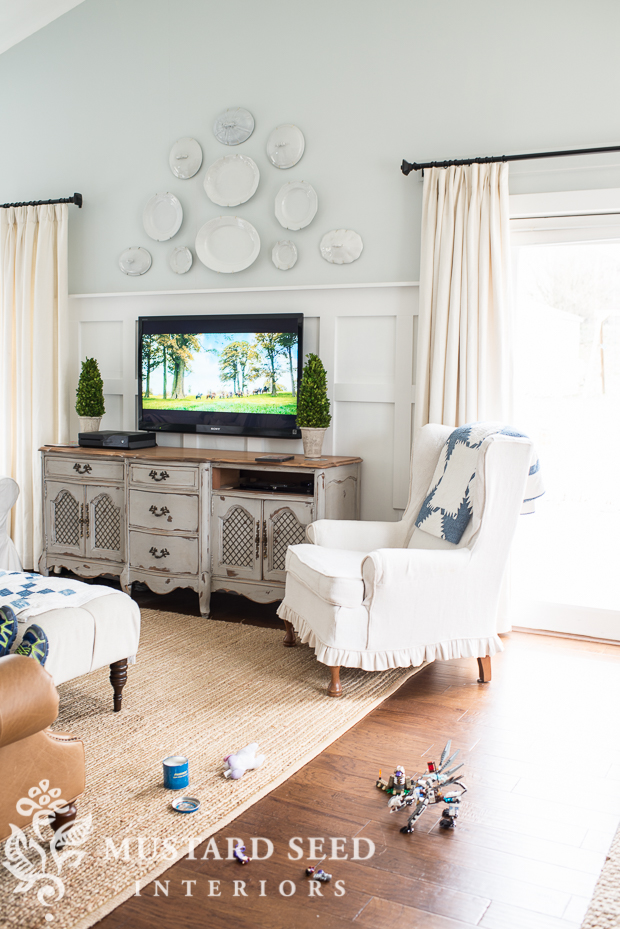 I put the other one in the corner behind the sofa, with an ottoman.  I’m not sold on keeping it there, but I’ll give it a try for a little while.  I like the way it makes a little reading nook out of that area.  (Obviously, I need to move those plates, but I’m still trying things out at this stage.) 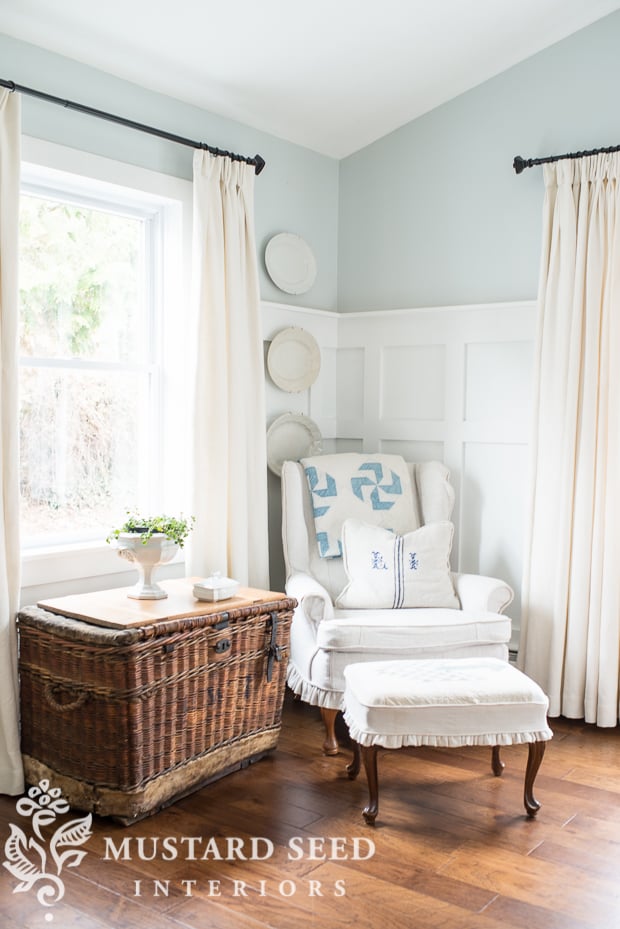 I am most likely going to take that large basket to sell at Lucketts and will add a sofa table behind the Ikea sofa.  I have a small bench that I think will work well for a side table on the right of the leather sofa and I’d like to swap out the French provincial buffet that’s under the TV with this smaller marble-topped dresser… 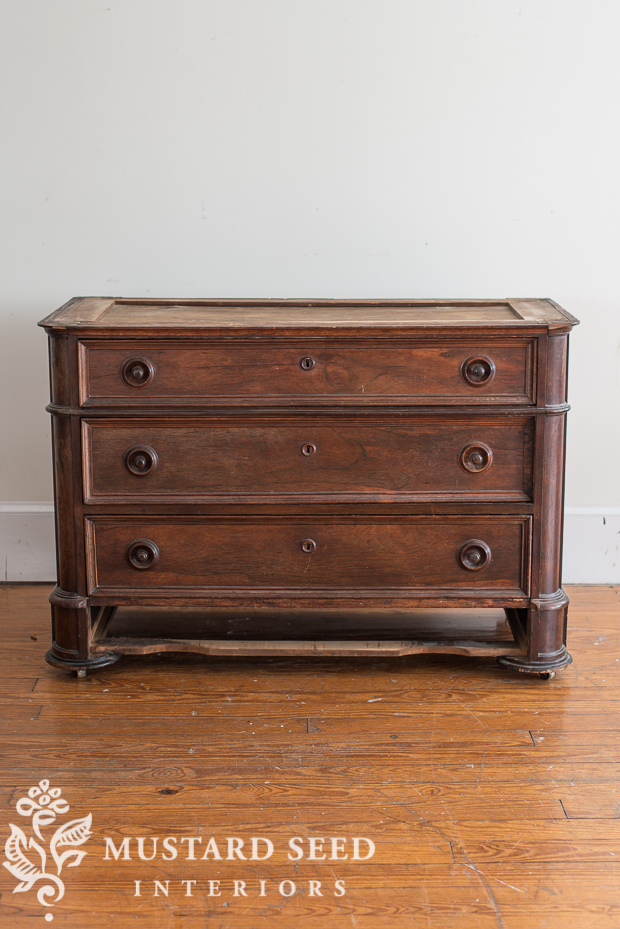 We really don’t need a piece as wide as the buffet we’re currently using under the TV.  The dresser will fit better and still provide plenty of storage.  I’m going to paint and sell the buffet at Lucketts, so it’s a win-win.

The French caned daybed doesn’t fit perfectly into my Farmhouse White theme, so it is for sale now, if you’re local (or willing to pick it up) and interested.  The caning is in perfect condition and it’s upholstered in a blue & white woven cotton check.  It’s been in our family room for a few years, so there are a few small spots on the cushion, but it is removable (with an envelope closure) and washable.  As I said, we rarely sat on it, so it’s in nice condition. 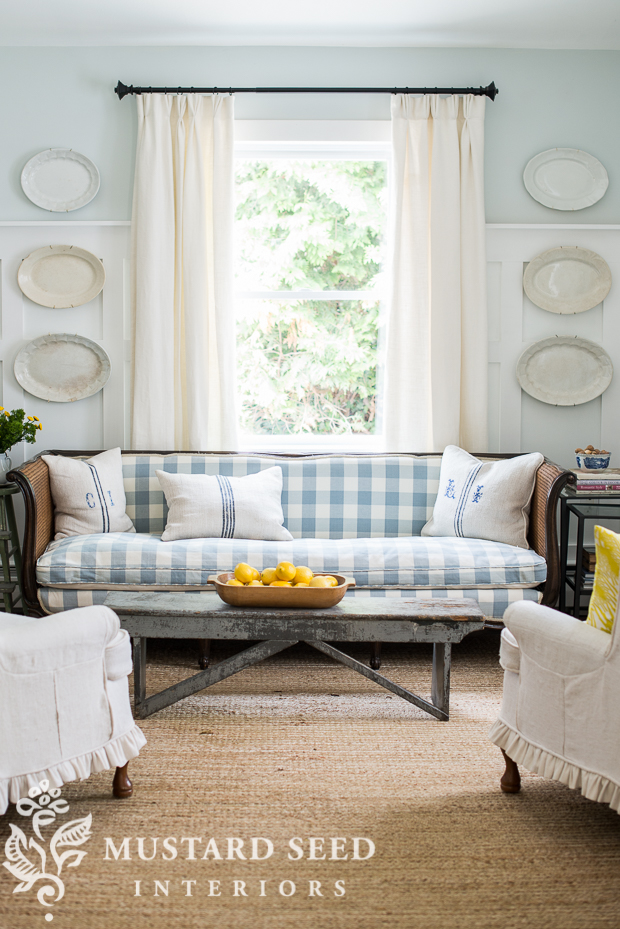 Oh, and this is the piece that was in the table of contents in Country Living!  It’s priced at $280.  E-mail me at marian@missmustardseed.com with questions or to let me know if you’d like to buy it.

I’ll also be selling the pair of green velvet chairs and a few other things from my house.

I’ll share more on this room as it develops!

When Calvin got home from time with my parents, he ran right over to the Ikea sofa and sat on it.

“Oh, Mommy!  Is this how our for-real house going to look now?”

He’s so used to us moving things around for photo shoots, that he had to ask.

“Yes.  This is how our for-real house is going to look now.”