As I shared in Monday’s post, I’m taking the time to work through small projects as I come across specific materials I purchased with the intention of making them.  I think that’s one of the problems with being someone who likes projects – we’re always collecting materials, tools, and supplies for the next project.  Or 15 projects.  While I had the ironing board out and was already working on measuring, cutting, and sewing for the rice & lavender hot/cold packs, I decided to hem some linen towels and make a case for my embroidery scissors out of some scraps.

I purchased a couple of yards of THIS linen toweling when I was ordering some linen fabric for other projects with the intention of making some more kitchen dish towels.  (They have all sorts of patterns and colors, too.)  I washed and cut the fabric, but never hemmed it to finish the towels!  I also had some scraps of antique linen toweling and grain sacks from other projects that I had been meaning to hem.  I started this project last March and set it aside when there was a call to sew masks.  I just never picked it back up again, but now was the time! 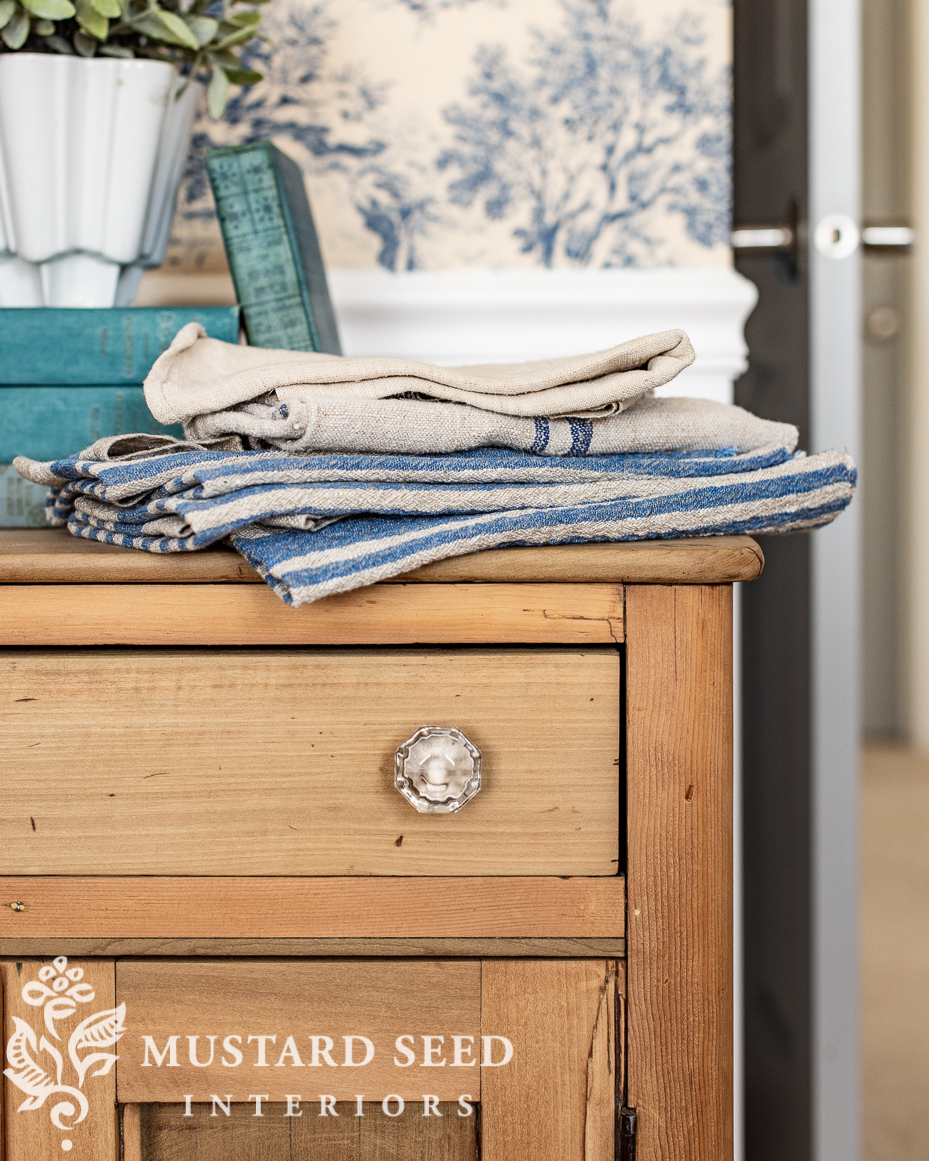 Toweling is already finished on two sides and is a good width to use as kitchen/hand towels, so all I needed to do was fold, press, and sew the raw edges on two sides. 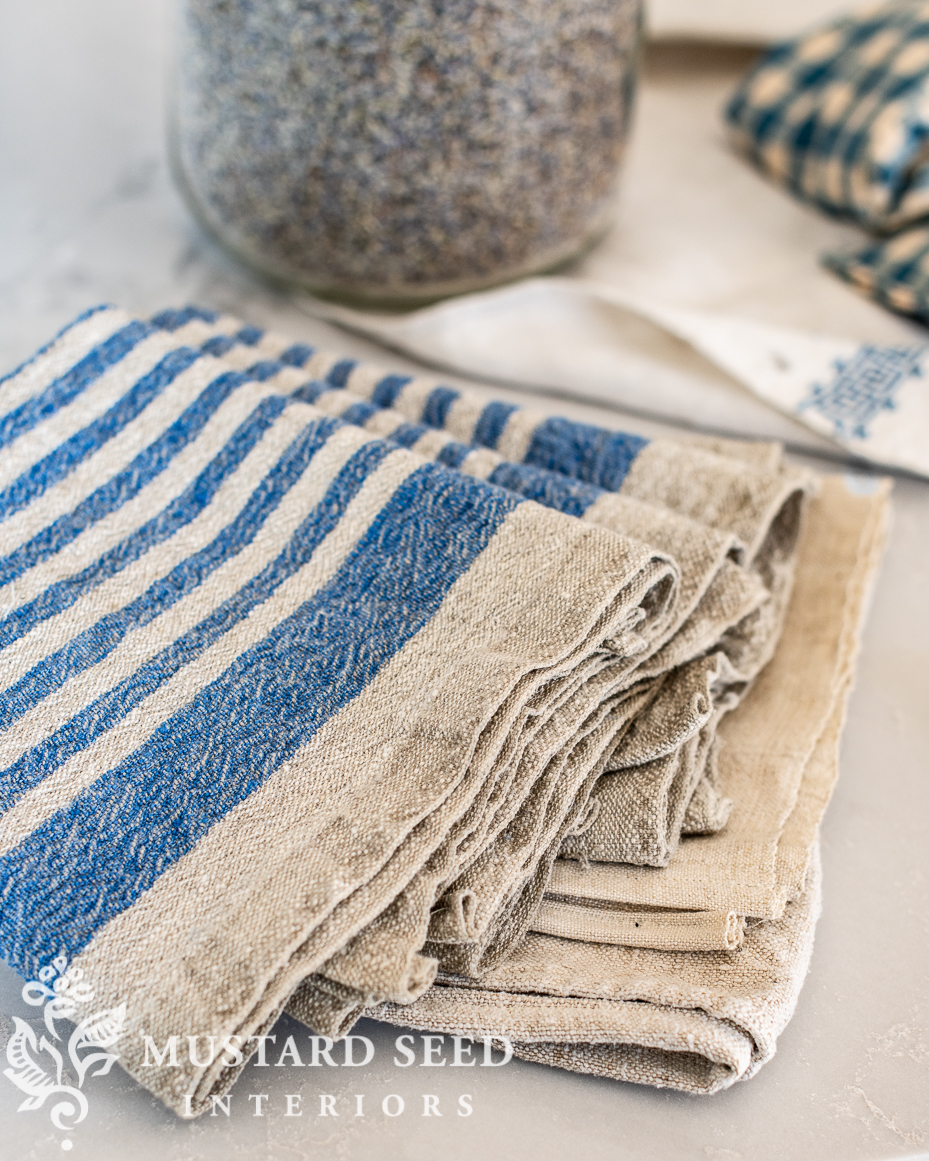 I ended up finishing six towels in about 20-30 minutes.  It’s funny how we’ll let projects sit around for so long when they are so quick and easy to complete!  I need to try to remember that and complete small projects before I buy the materials for new ones. 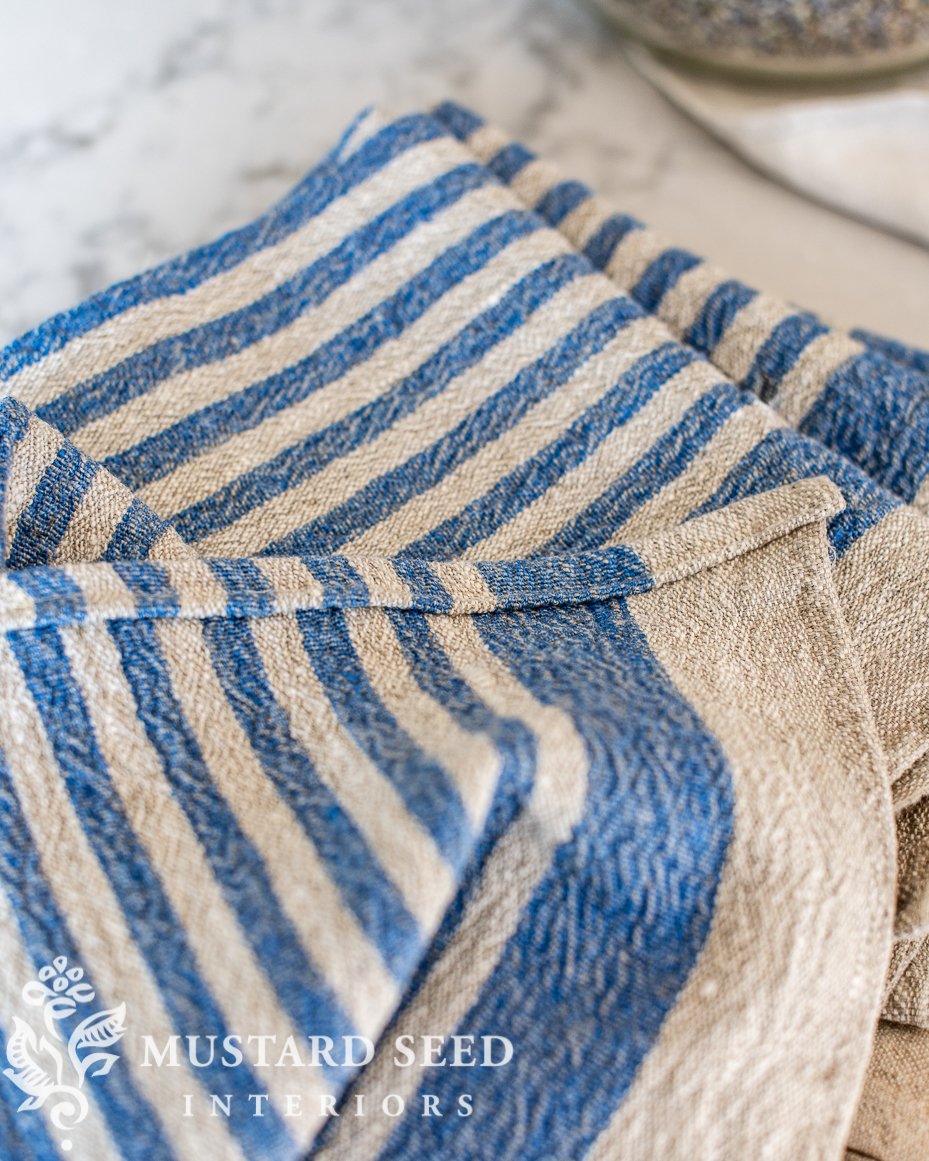 If you’re curious about using linen towels, I wrote a post about them last year.  (You can find that HERE.)  I have acquired tons of linen towels, new and antique, over the years, but I rarely used them!  I still used terrycloth towels that I bought from home stores.  They always looked stained and messy, though, and took a long time to dry.  I switched to the linen towels with a little skepticism.  I wasn’t sure if they would be absorbent enough.  But, I love them.  They absorb water fine, they dry quickly, and they don’t look grungy after heavy use.  I don’t know what it is, but the linen seems to be very forgiving with stains.

So, now I have a few more towels to put into the rotation, which is nice since I change them out every day or two.  I also cleaned out my sewing project basket and can check another small project off the list. 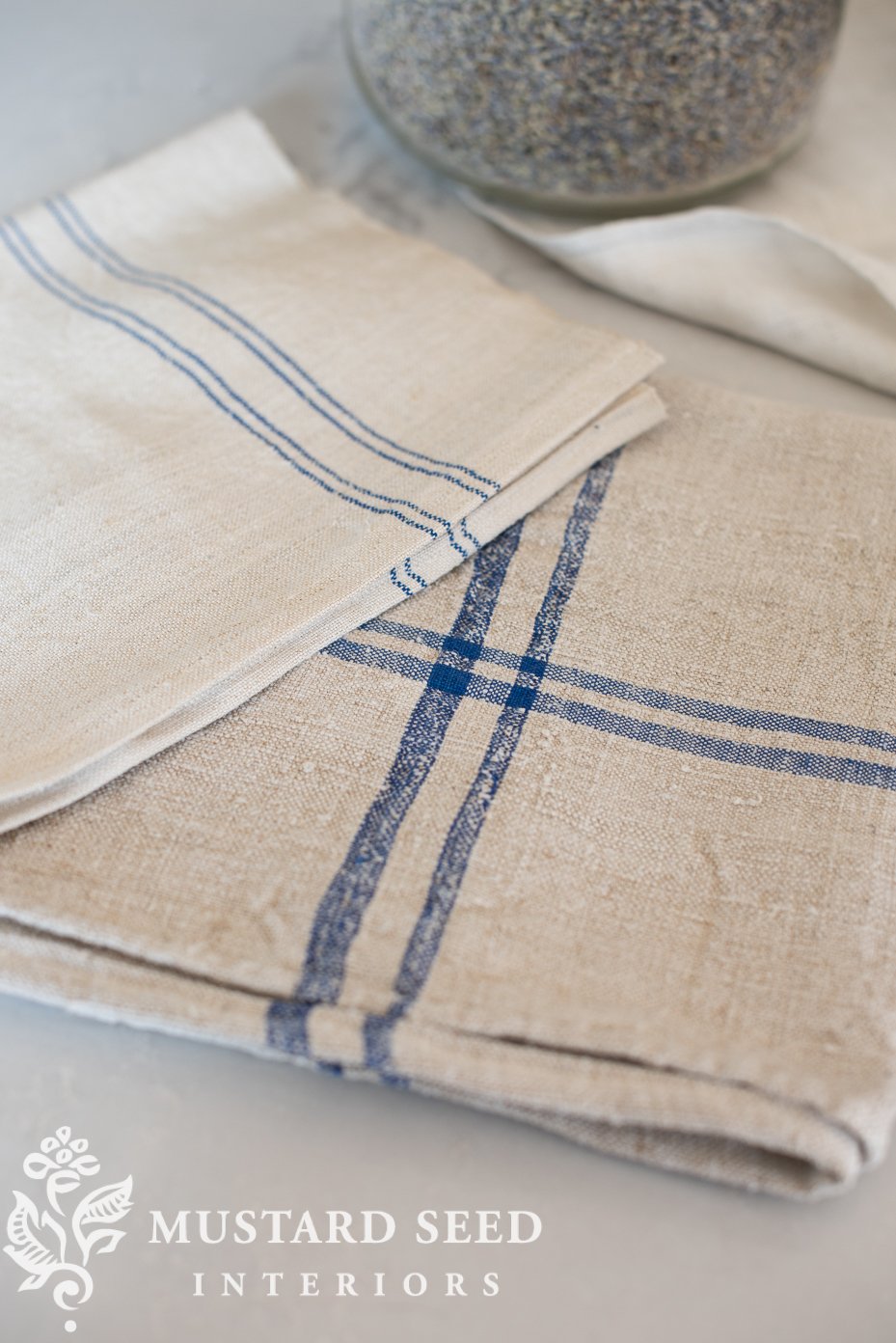 While I had my fabric scraps out, I also made a little case for my embroidery scissors.  They are beautiful brass scissors that I bought for my birthday last year.  They came in a little plastic case, though, and they were always sliding out.  They are quite sharp and I was tired of getting poked with them when fishing for them in my knitting/crochet project bag, so I’ve been wanting to buy a case for a while.  I hadn’t found any I really liked and it’s no-spend February, so I decided to try making my own. 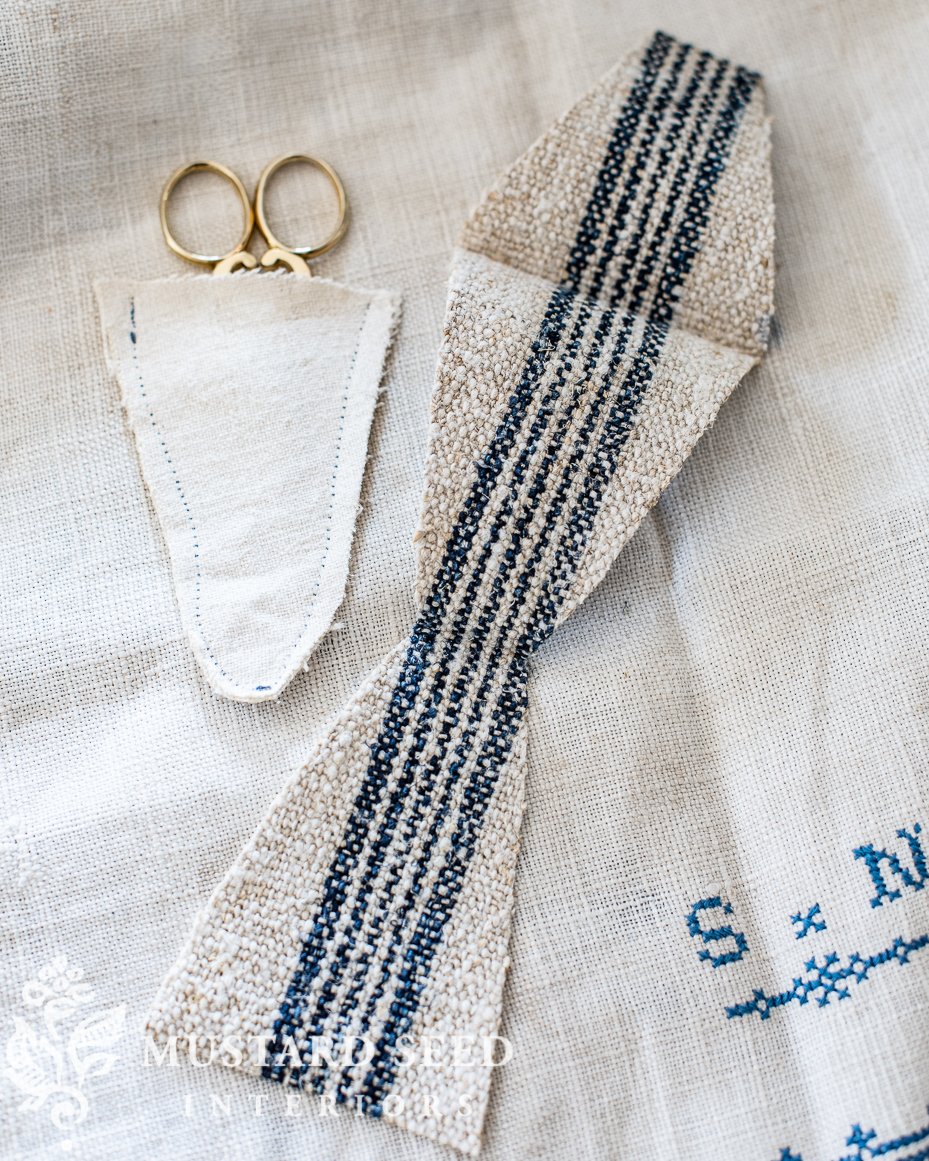 I used the plastic case as a template and made a little liner out of some tightly-woven linen and then cut an outer case out of am antique grainsack scrap. 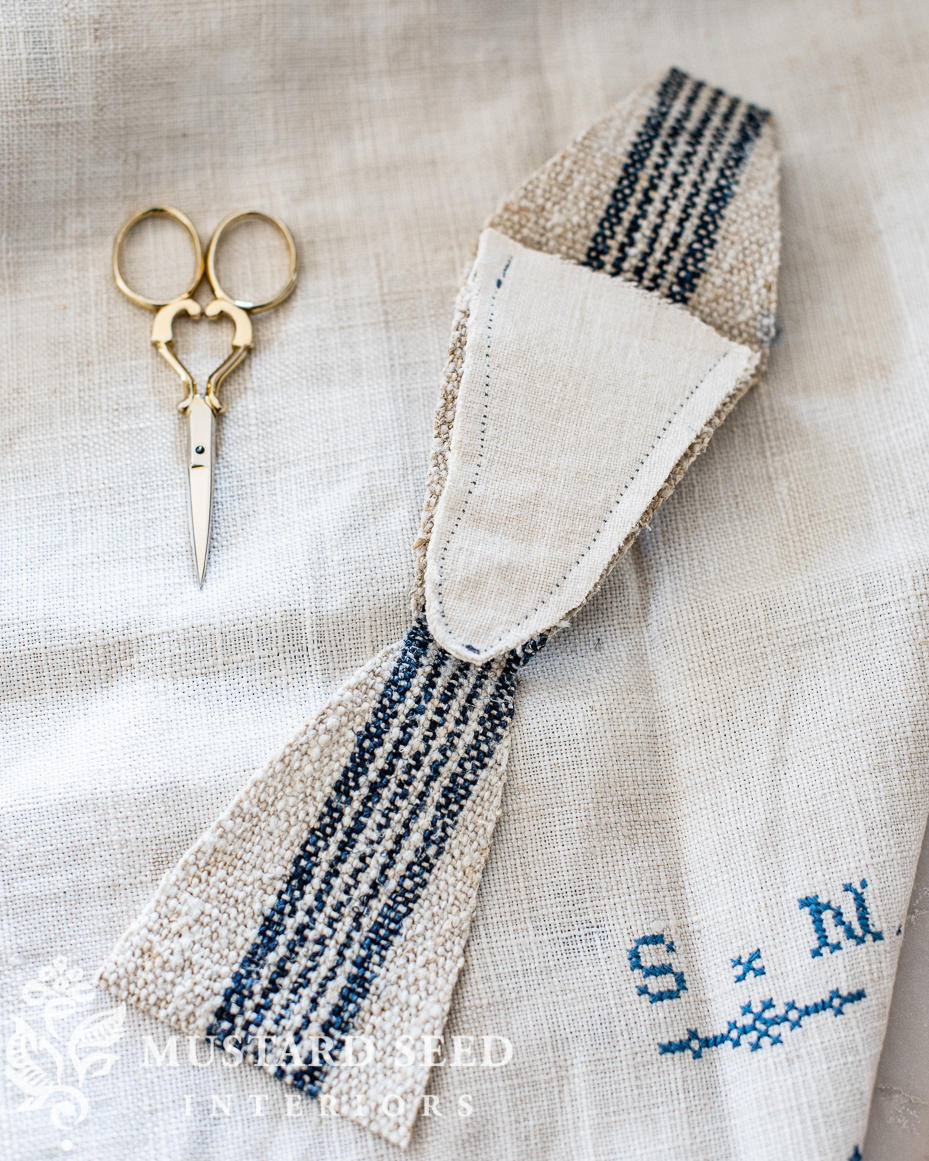 You can see what a nice, precise, and straight sewer I am.  A-hem. 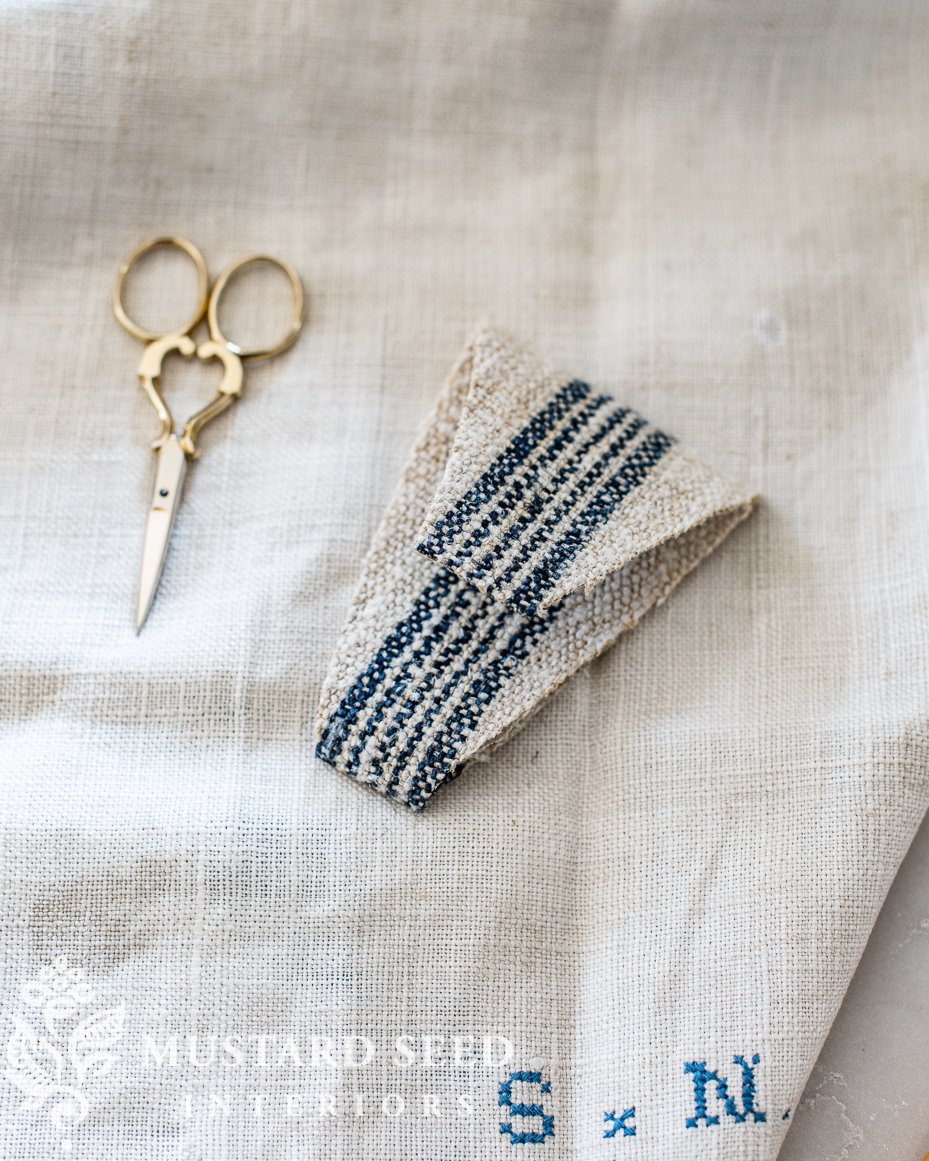 My little pouch was looking pretty cute, though, after I ironed it and fitted it together.

I then hand-sewed the seams and the liner in place using a pretty off-white embroidery thread. 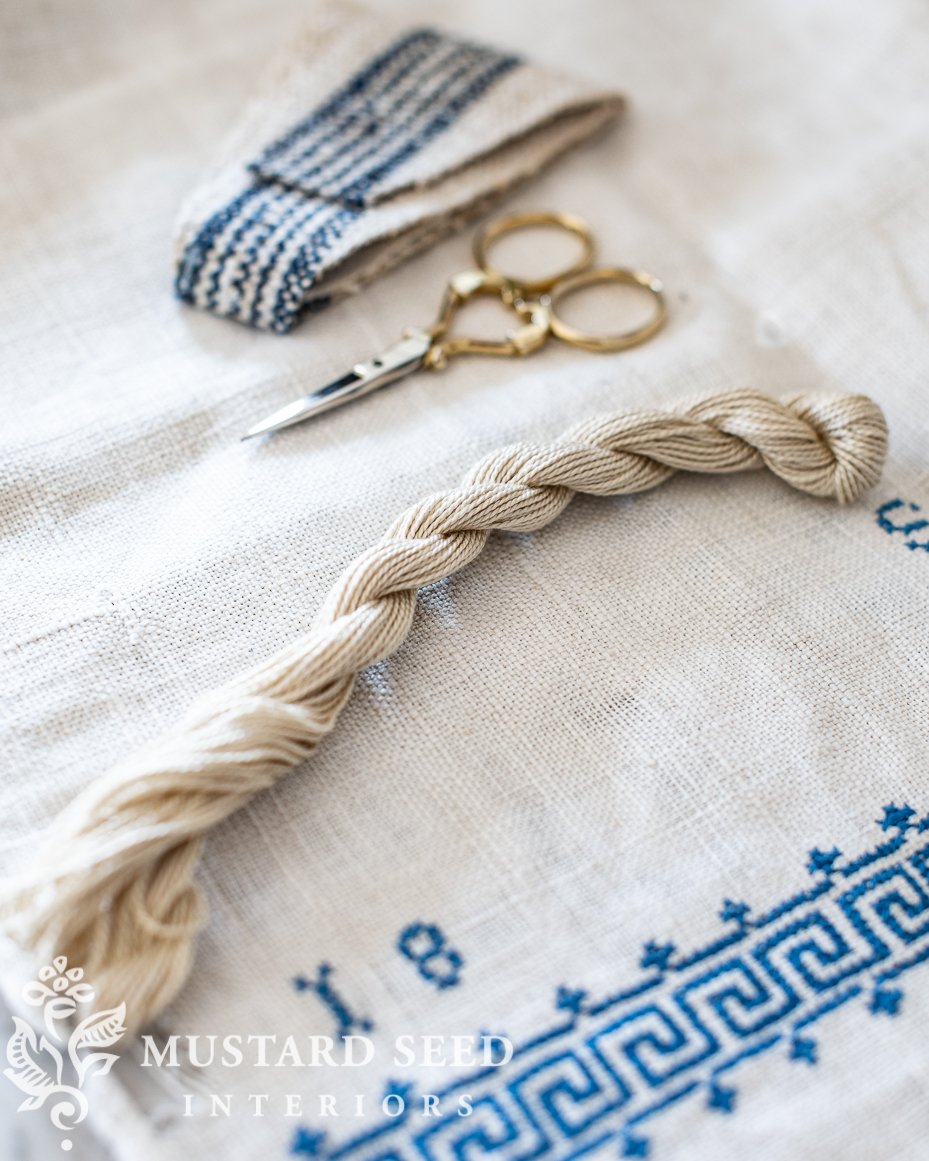 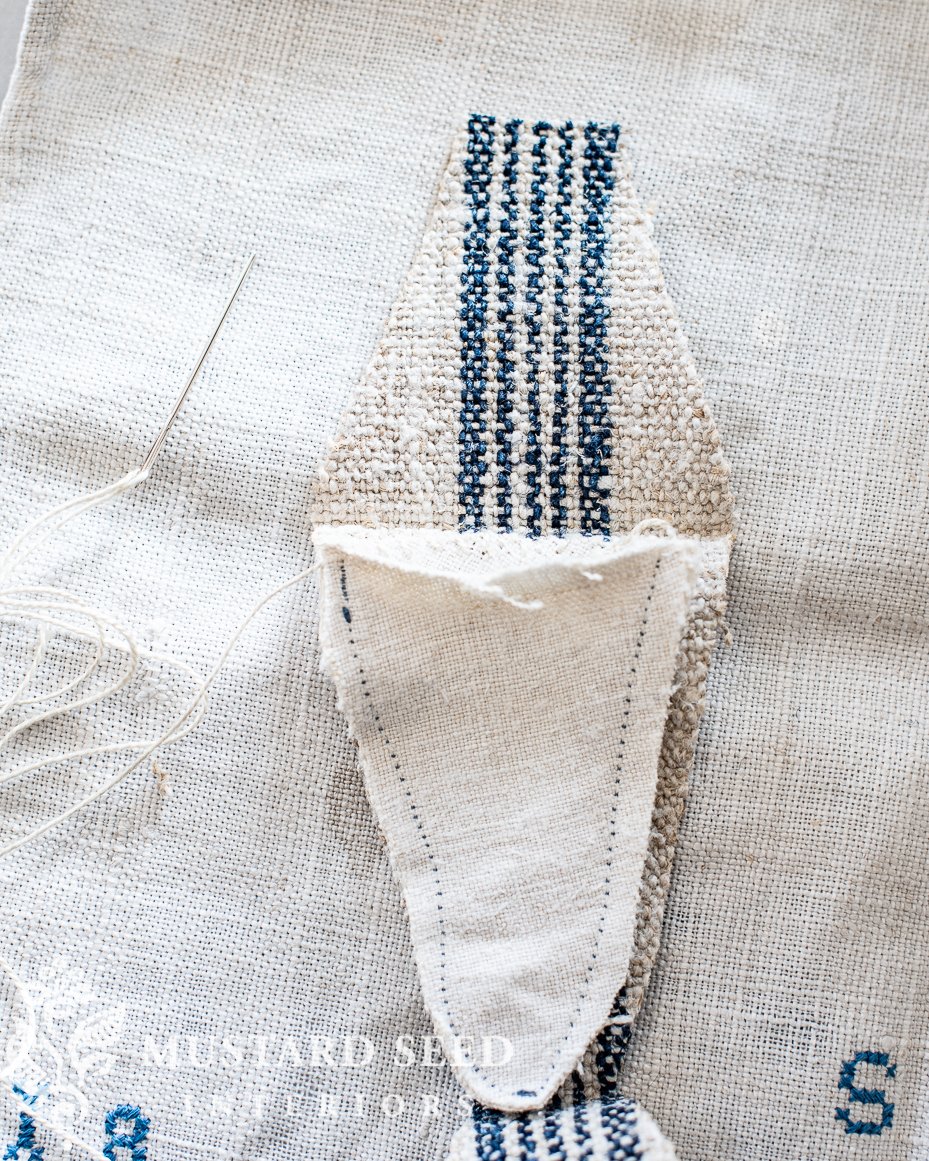 I realized shortly into the process, though, that the loose weave of the grain sack wasn’t going to look very neat and tidy with the blanket-stitched edge.   I think this one will end up being my prototype! 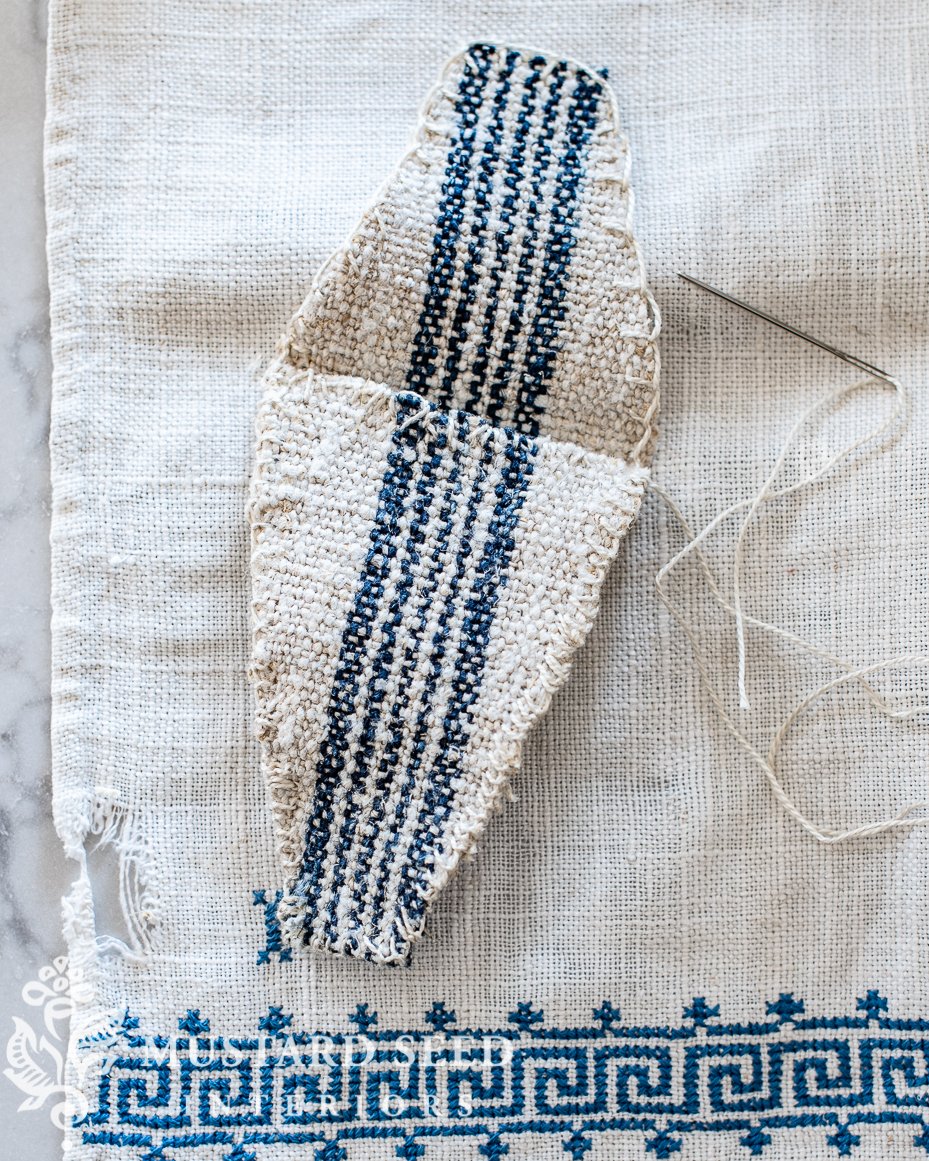 It turned out sweet, but it definitely has a homespun quality about it. 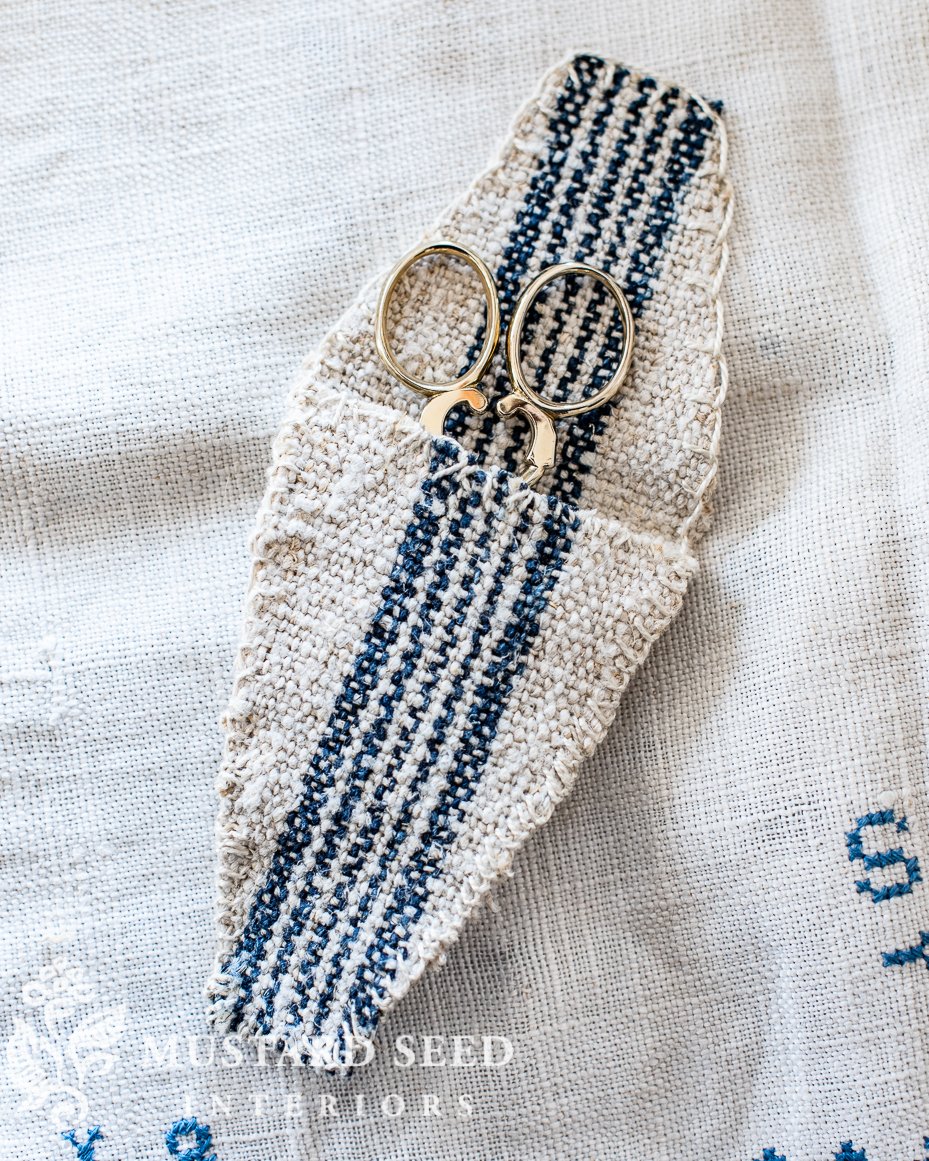 I waffle between loving its imperfections and quirks and wanting to make a new one as soon as possible!  Now I’ve learned on the first one, I think I could do a much better job on the second one. 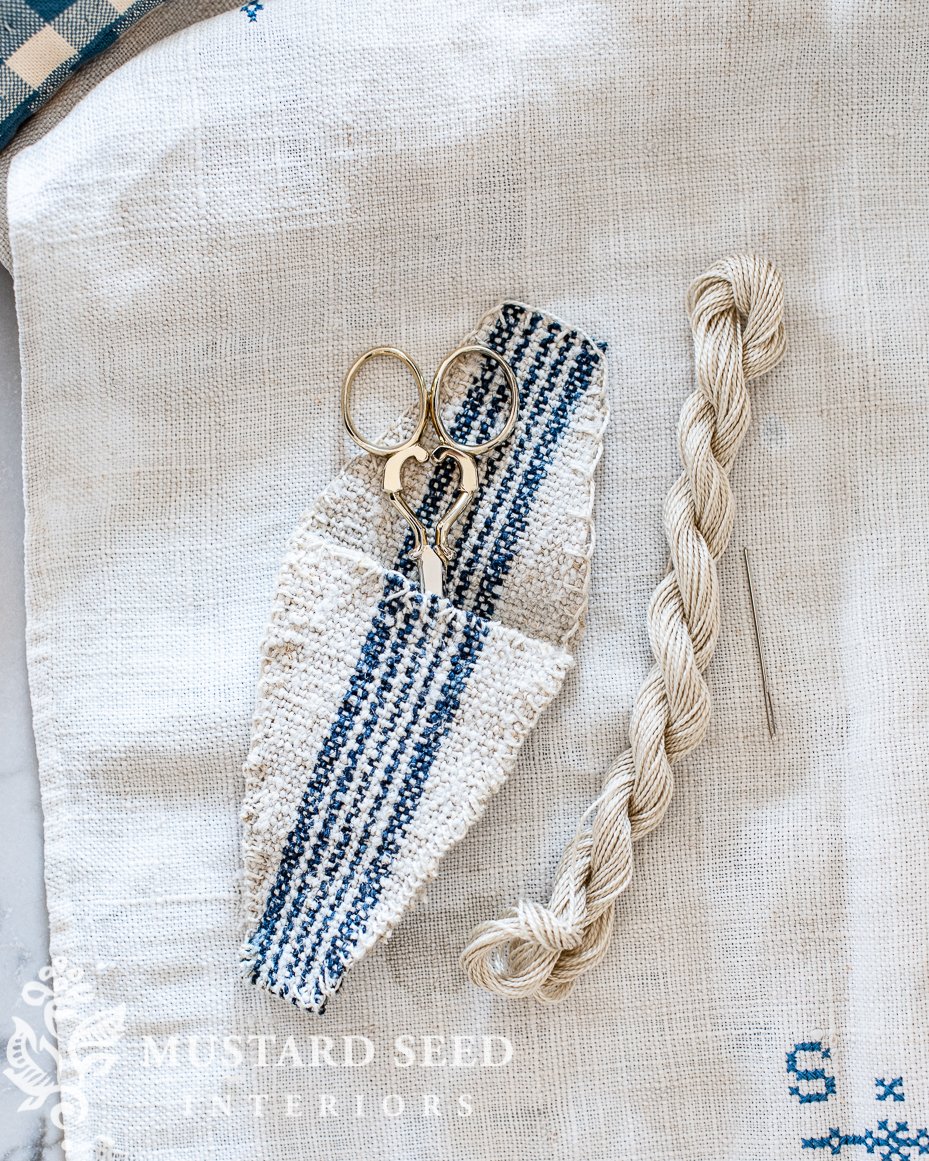 I do want to put a snap on this one to hold the top flap closed, but it’s no-spend February and I didn’t have any snaps in my notions box.  I even went through the house to see if I could find a pouch or something I could steal a snap from.  I came up empty-handed, though.  One of my Instagram followers is cleaning out her sewing notions and offered to send me a snap, so I’m taking her up on that! 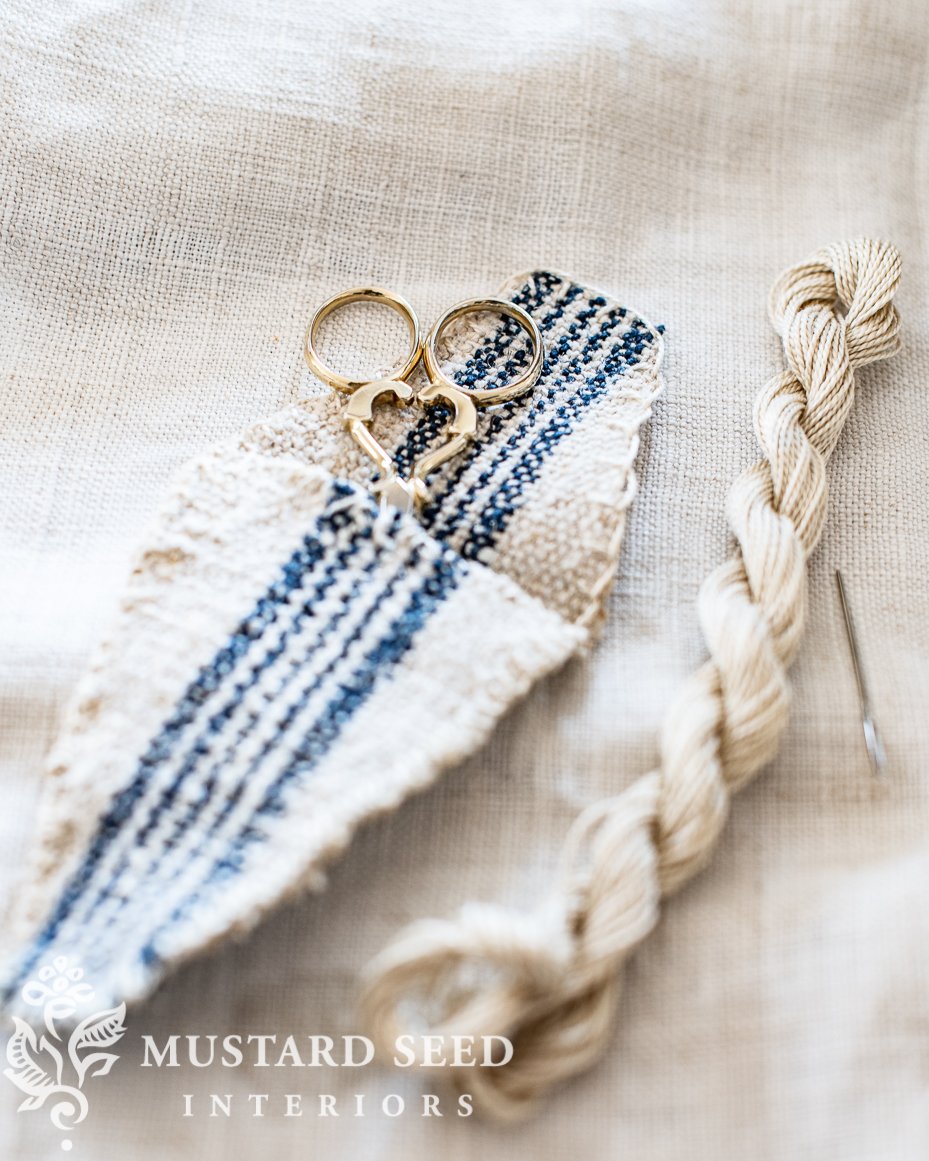 I do plan on making another one, but this one works great for now, better than the plastic case, and I learned a lot in the process.