We started saying it a few years ago…  “We will definitely hire a moving company the next time we move!”

Having gone through about 7 DIY moves in our married life, we were done with gathering volunteers to load a truck.  We were ready to relish in the experience of having it all done by professionals.

Or so we thought. 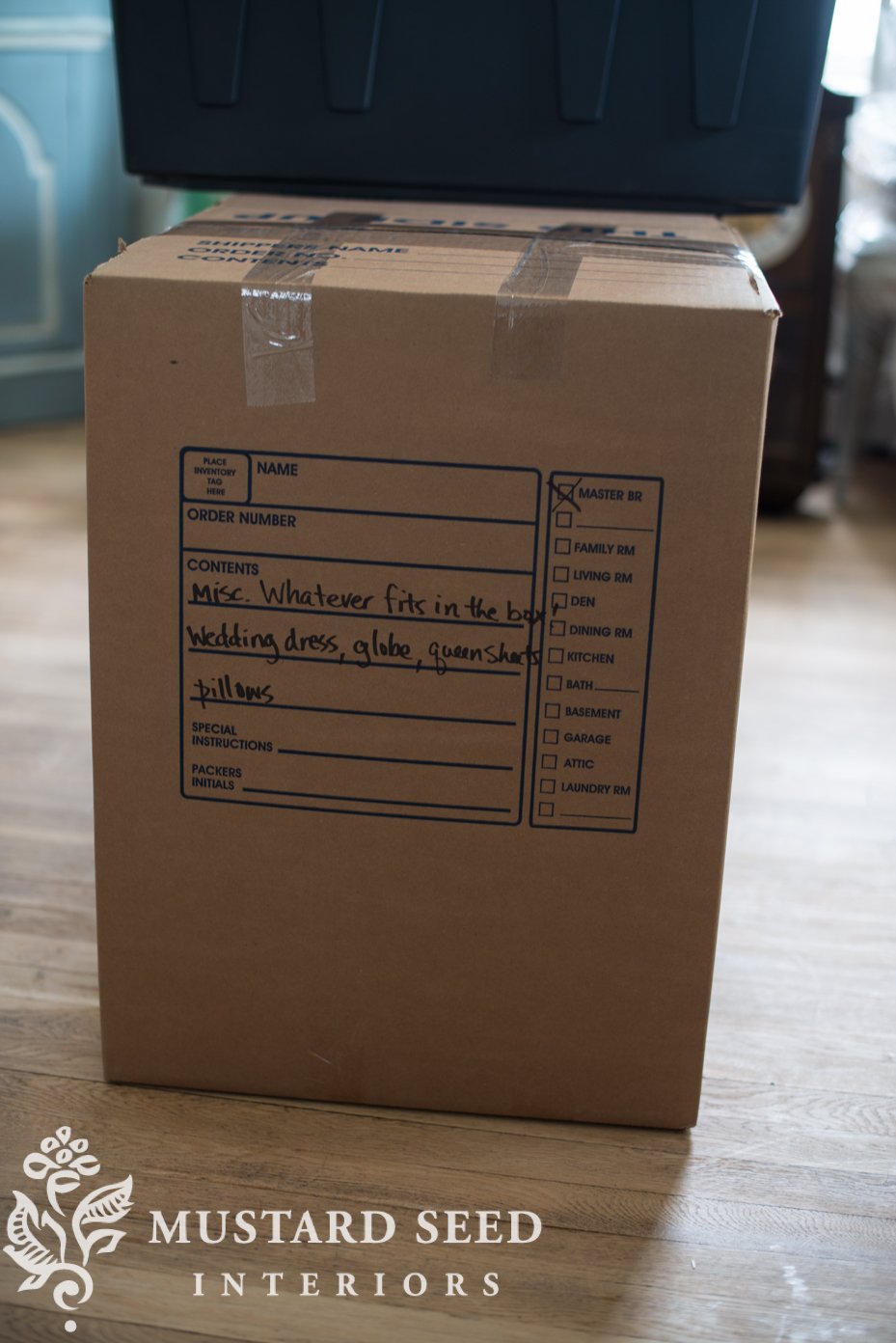 (You can tell which boxes I packed later in the process, because my descriptions get a little nutty.)

We started getting quotes for our move a few weeks ago and the DIY instinct that kicks in when you get professional quotes could not be ignored.  Since it’s not a door-to-door move, it was outrageously expensive.  Like, we-could-buy-a-decent-used-car kind of expensive and we just weren’t willing to spend that kind of money for something that didn’t have value beyond saving us the headache (and backache) of doing it ourselves.

It was a bummer of a realization, but the truth is that we can still handle a DIY move.  We move a pretty massive amount of furniture and boxes each year for the Lucketts Spring Market.  We’ve gotten good at it and we have plenty of people who were willing and able to help us.

And, you know what?  I’m actually a little relieved.  While there are great moving companies out there, no one is going to take care of our stuff better than we will.  We made sure the dryer isn’t stack on the sectional and that fragile pieces were carefully wrapped and tightly tucked into a safe spot on the truck.  I know damages happen in even the best of moves, but we did our best to minimize those damages.

We decided to go with a company called uPack (this isn’t a sponsored post, FYI.)  They deliver a 28′ trailer to your house, you can fill it up, and then they pick it up, store it (packed), and deliver it to your new house.  I like the idea that everything stays where we packed it, again, to minimize damages.  The downside is that the trailer sits outside, so they aren’t climate controlled.  We had to keep some things that were sensitive to heat and humidity, like candles, my guitars, etc. at my parent’s house for the short-term. 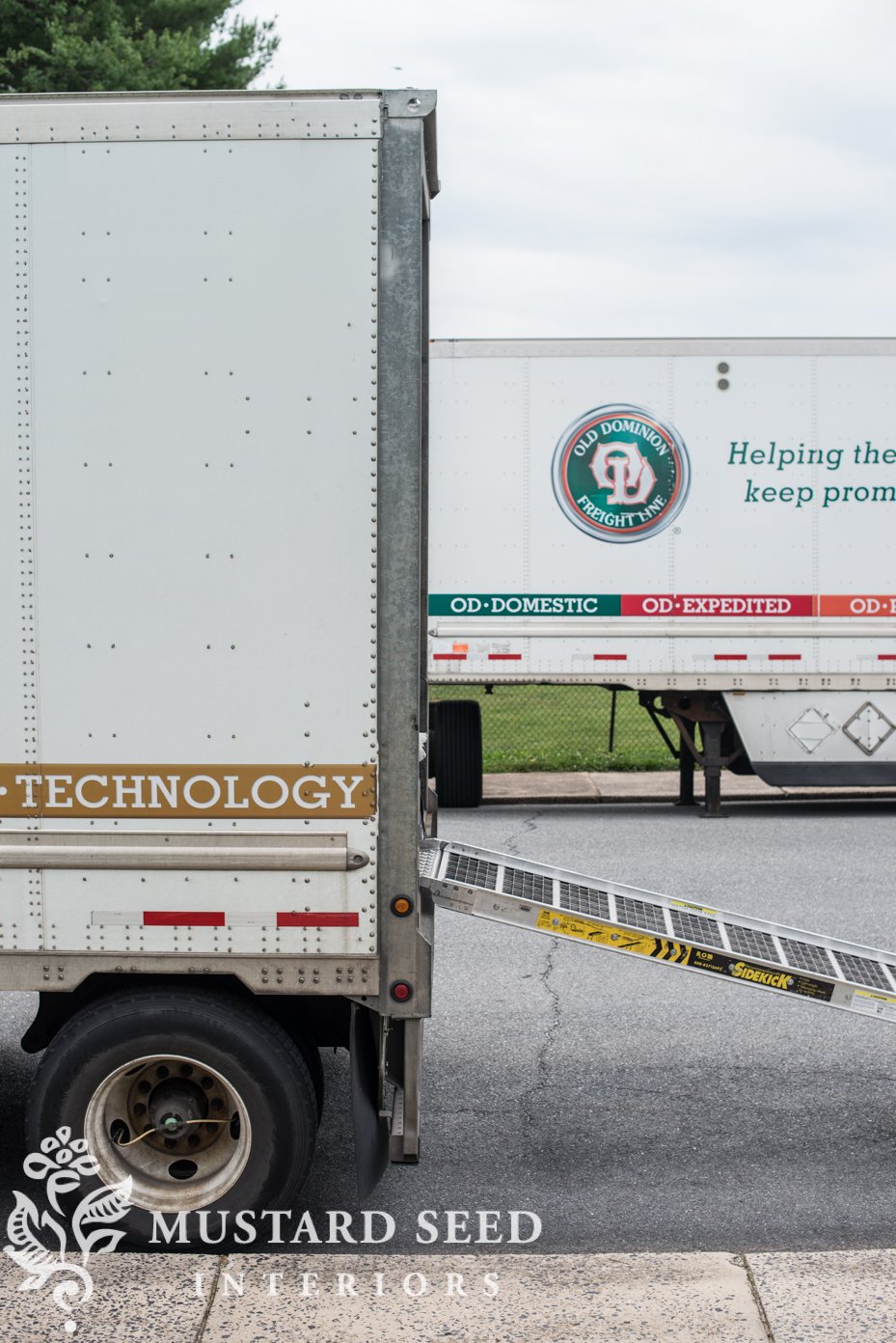 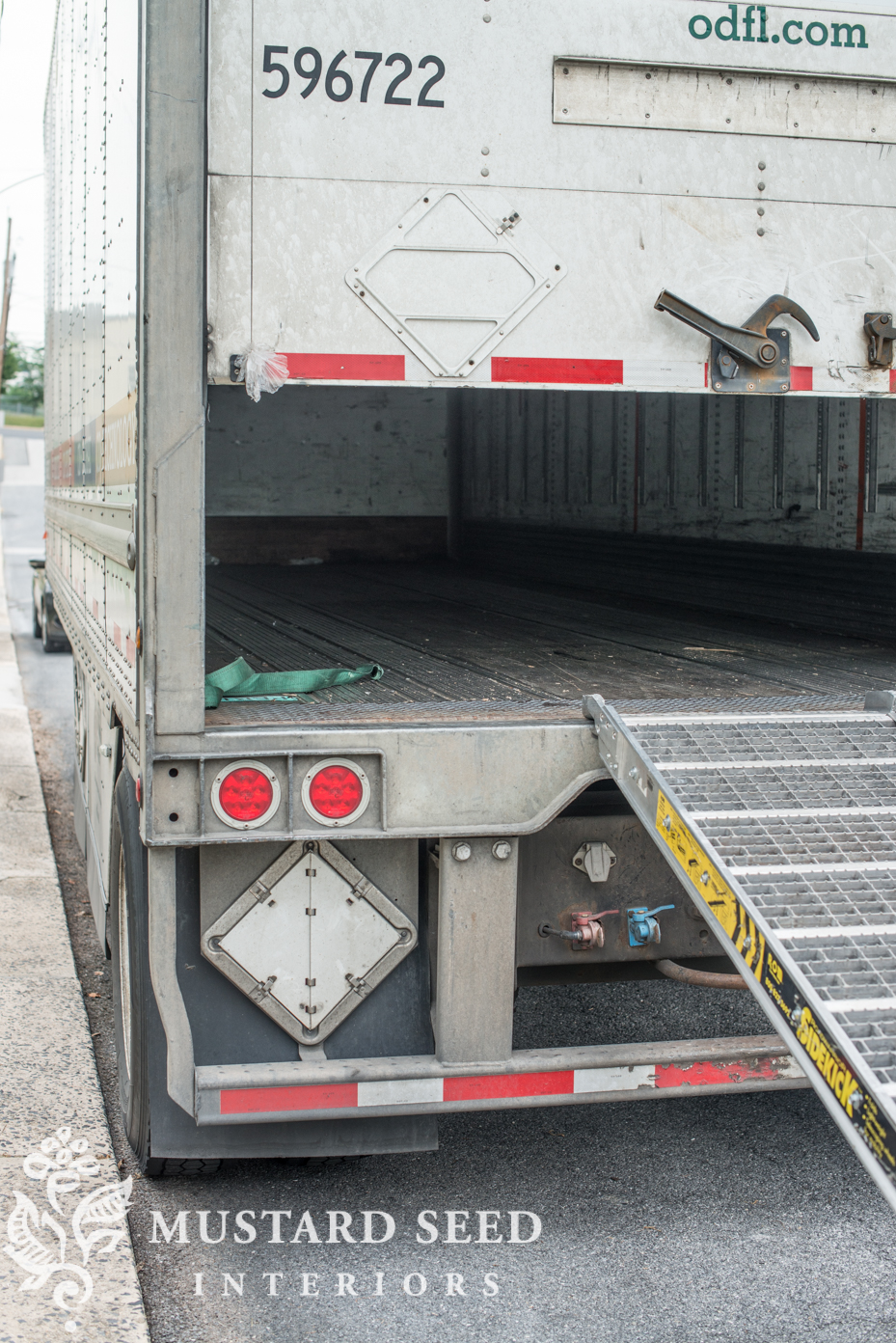 We ordered two 28′ trucks and they parked them outside the house the day before the move.

We did everything we could the weeks leading up to the actual move to make things easier.  We sorted, packed, downsized, and tried to get everything either in a box or wrapped in shrink wrap and/or bubble wrap. 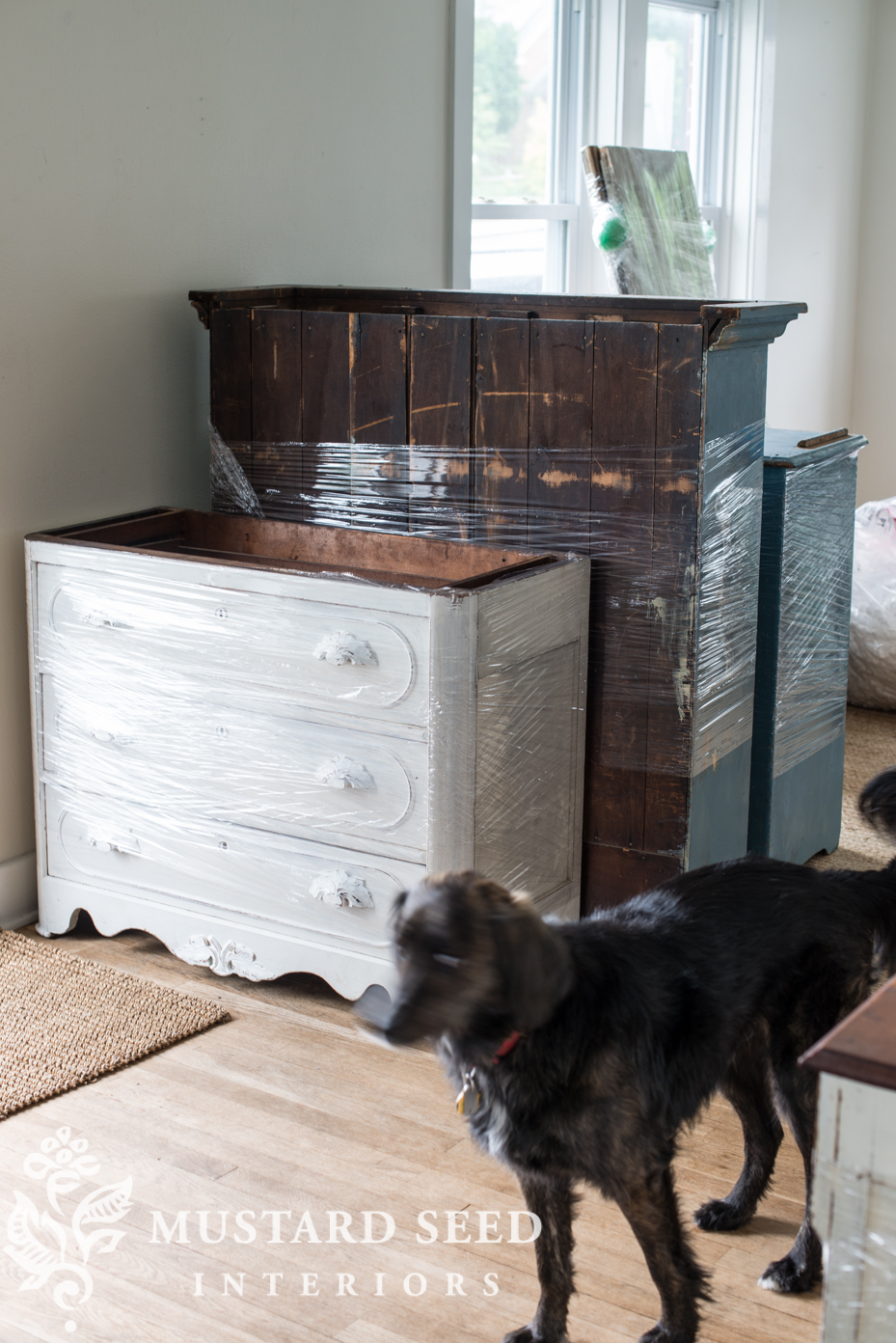 (Shrink wrap is a miracle, in case you didn’t know.)

The actual truck-packing ended up happening over three days.  And I had a serious plan for those three days.  It was even on paper. 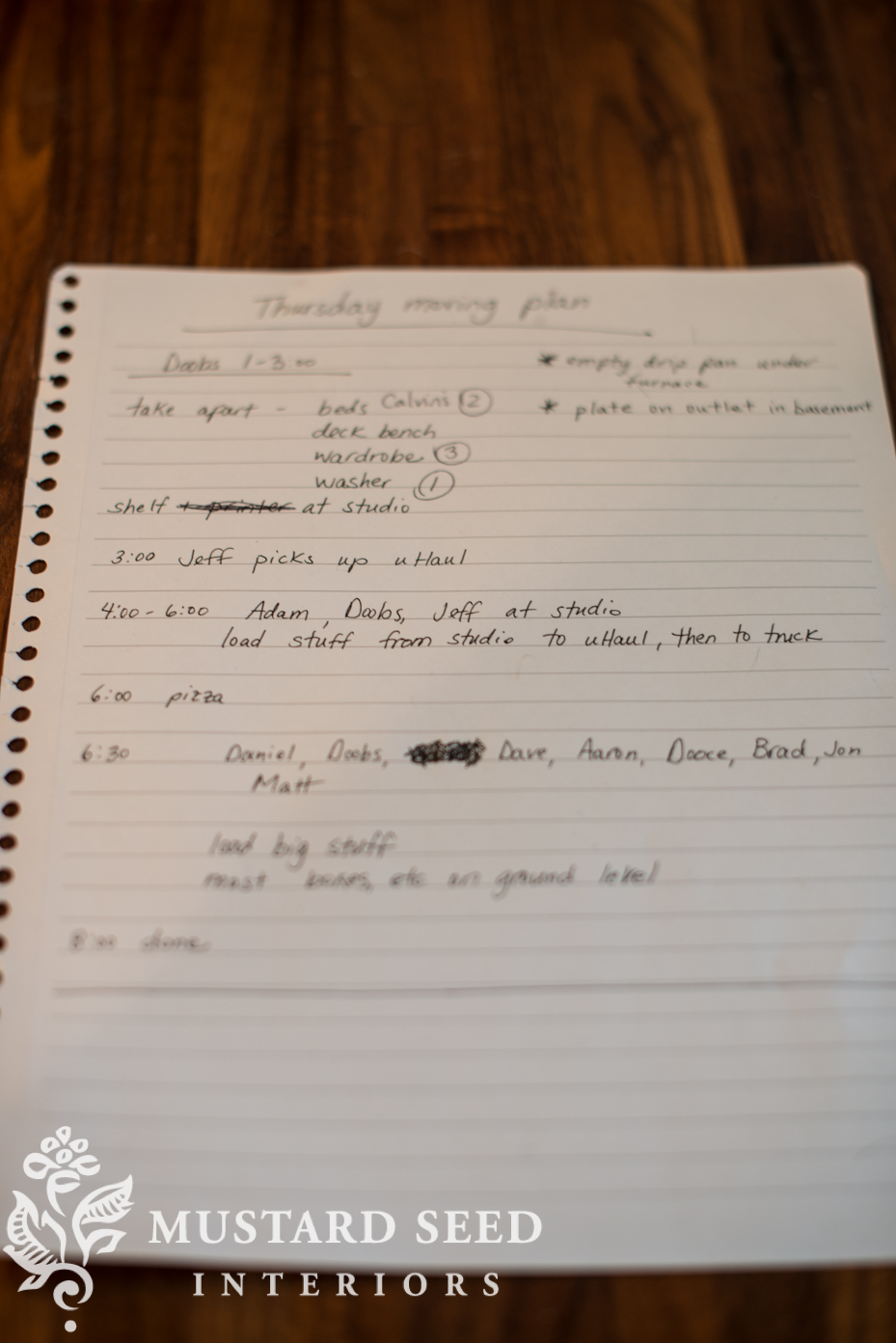 We recruited some young, strong guys to…

1.) Load everything from my studio onto a smaller uHaul truck and then load it onto the larger moving truck

2.) Load the heaviest stuff from the house into the truck

3.) Bring everything from the basement and the upstairs to the ground floor

(Those guys we recruited also left some final personal touches in the house.  Check out the grocery list…) 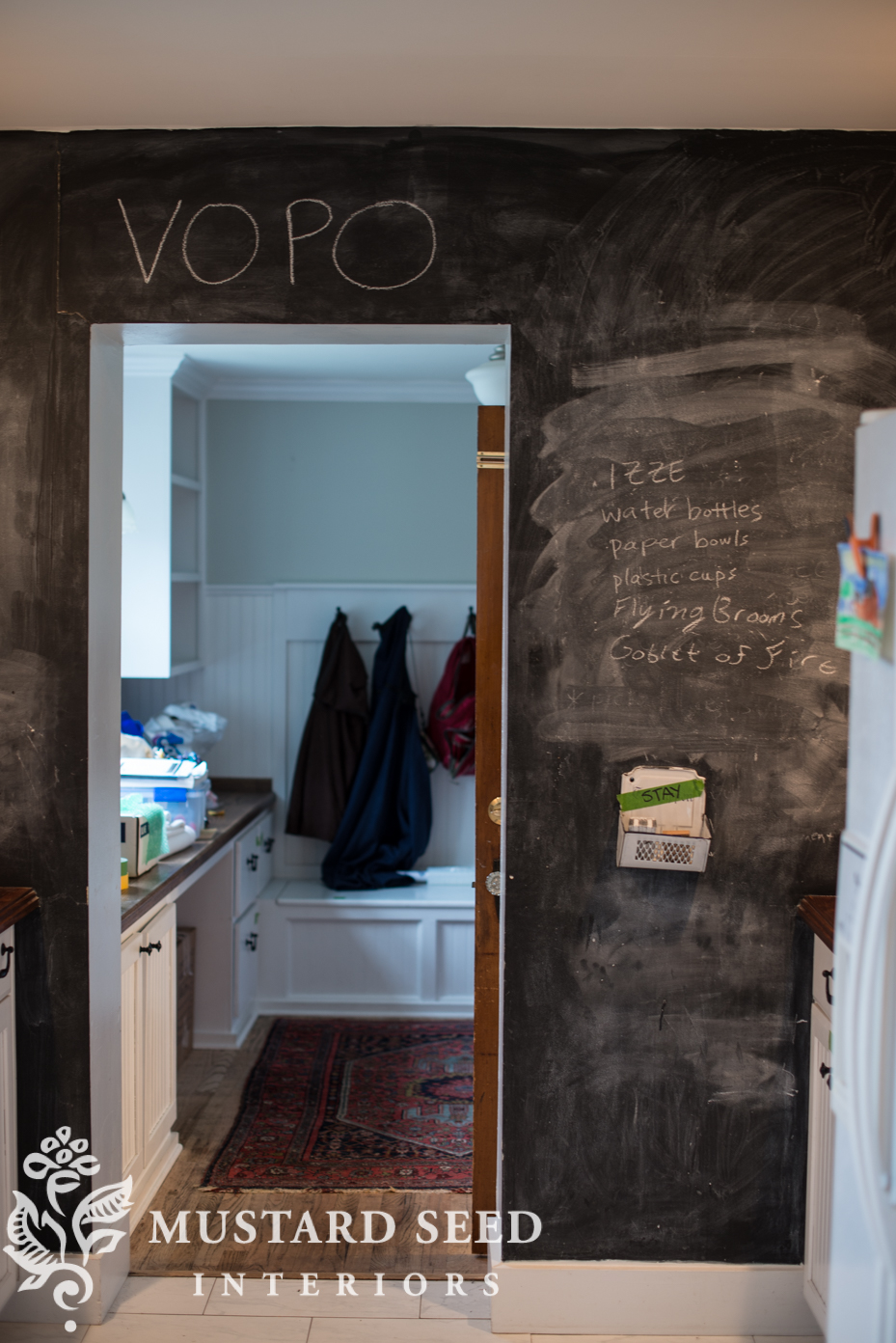 Four guys came early, at 4:00, to load and move the studio contents.  Everything was out of the studio in a little over an hour.  The rest of the guys joined us at 6:00 and we fed them pizza before they started bringing large pieces out of the house. 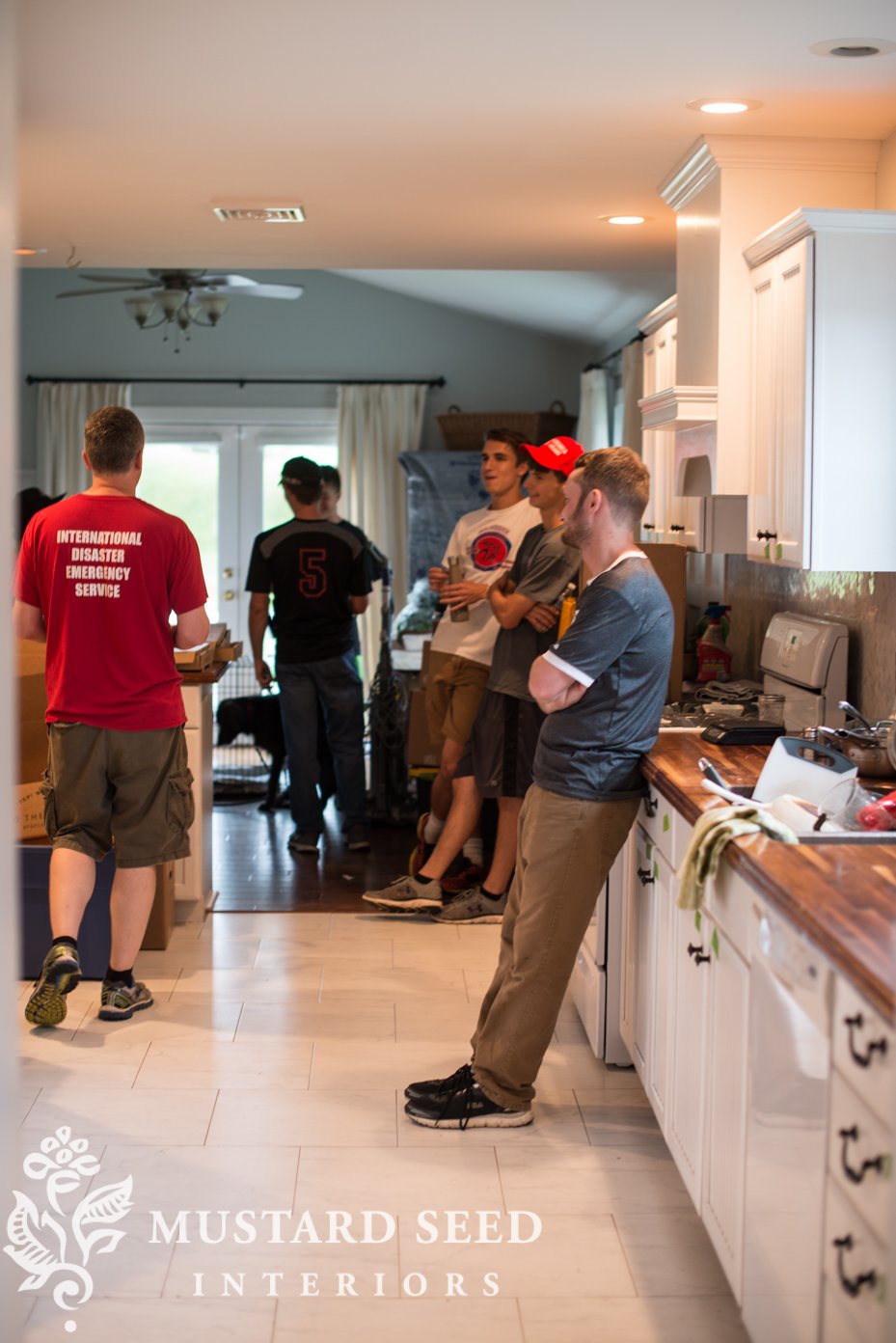 They worked at such a fast pace that we had to shift gears and have them bring stuff up from the basement and down from the 2nd floor while Jeff and a couple of guys played Tetris with our belongings.

We had only asked the guys to help until 8:00 and we had met our goals by 8:00.  Jeff told them they could go home if they needed to.

I can’t tell you how full my heart was as these guys willingly stayed and helped until about 9:30.  They could see there was more to do and they wanted to serve us.  Jeff and I agreed that we would take that crew of guys over any professional movers any day of the week.

We were whipped by the end of day 1, but our goal was surpassed and we were feeling optimistic about the next two days.

This was the toughest day, I think.  We worked on all of the last minute packing and cleaning that is tiresome and tedious.  Packing food, cleaning supplies, taking apart beds, cleaning the appliances, wrapping the sofa in plastic, etc.  We also worked on getting all of the remaining boxes into the front two rooms of the house and sorted into piles of “boxy” things and bulky things.  Jeff finished putting together the puzzle of belongings in the first truck until it was completely full.  We emptied and packed up the shed and the reaming items in the basement workshop.

I also went to the studio to clean it, so that space was entirely done.

We went to bed feeling like we were set up for an easy day to empty the house.

This is the day when we had volunteers coming from our church in the morning to help load the truck.  Jeff and I both eased ourselves out of the mattress on the floor, ready for it all to be over, but knowing we had a long day ahead of us.

We finished up a few things before our helpers arrived at 8:00.  Everything was out of the house and on the curb by 8:40!  It took more time to situate everything in the second, truck, so things were packed tight and snug.  In the second truck, we had to pay per square foot of space we used, so we also wanted to make sure we didn’t waste space.

Once the truck was packed, our family worked on all of those little things that have to be finished before we could call it done.  Remove the food from the fridge and freezer, a final vacuum, double-checking each cabinet and closet, boxing all of the assorted and sundry items that hadn’t made it into a box, yet.

We were done.  We were past done.  We had to push to make it through, but we were finished by 1:00 and then we hopped in the car and drove seven hours to spend some time with Jeff’s family in Raleigh!   I turned on the seat heat and snuggled into my pillow to just sit and not have my head swimming with to-dos. 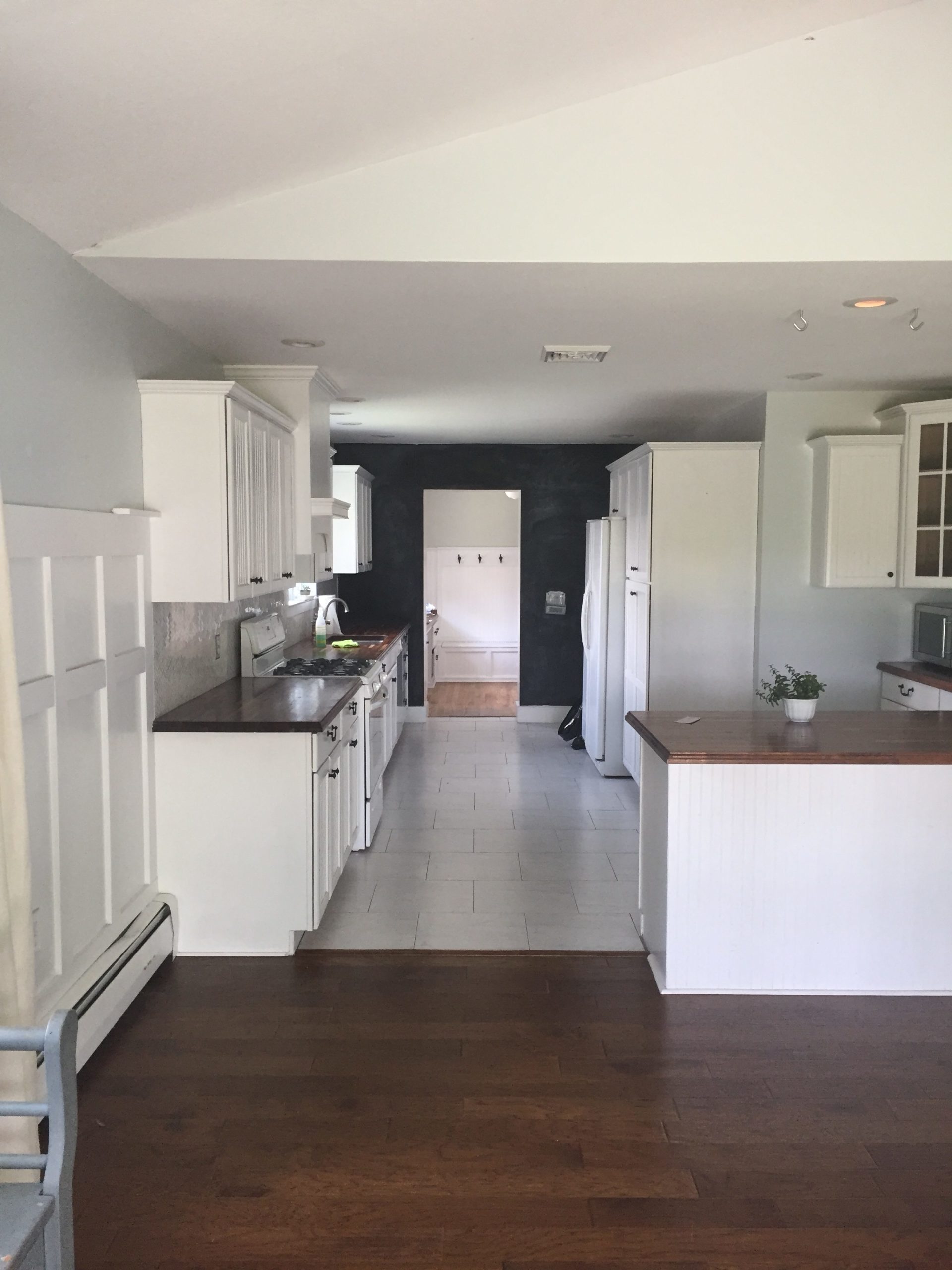 Since we were saving a lot of money doing a DIY move, we gave one gift to ourselves and hired professional cleaners to clean the house once we left.  It was glorious knowing that part would be taken care of and we’d be handing a squeaky clean house over to the new owners.

It’s such a relief to be done.  I didn’t even have the energy to be sad about our empty house.  I was mostly just glad that weeks of packing were finally over.

I had a meeting with my MMS Milk Paint team a couple of weeks ago and I said, “I am so drained creatively.  I go to write a blog post and I feel like all I can do is whine about packing!”  I tried to temper that, though, because who really wants to listen to someone whine?  I mean, really.  No one.

We will get to go back to the house once more before closing and we’ll take time to say a proper goodbye then.

I know you’re all still waiting to hear where we’re going and I know it sounds crazy, but we’re still waiting for all of the pieces to fall into place.  For now, we’re spending some time with family.  I’m going to try to get back into some sort of a work rhythm.  I’m going to take Sebastian on walks and take the boys to the pool.  I’m going to enjoy sketching and water colors.  I’m going to tool around and hit some of my favorite stores, shopping for inspiration more than stuff.

And, most enjoyable of all, I’m not going to pack!

Before I sign off, the voting for the Dash & Albert rug design competition is in full swing.  If you haven’t voted, go over to Instagram and ❤️ the ones you like.  The nice thing about this competition is that you can vote for any and all of the designs you like, so you don’t have to pick just one.  I’ve enjoyed voting for some of my favorites!  Dash & Albert will produce the top 10 rugs based on the number of likes.

Here is my favorite rug submission…

Just double click on the image to vote and browse the other submissions.

I’ll link to my other submissions later this week and share more about the design process as well.

PS – I would tell you what VOPO is, but then I would have to kill you.