Let’s talk about those moments when design plans don’t work.  You buy something, order something, you put it in place, and then you realize it’s not going to work the way you envisioned.  You can ignore that gut warning and plow ahead or you can pivot.  I’m about to pivot.

The fabric I ordered from Etsy arrived and it is beautiful.  I’m not disappointed in the pattern, color, or quality.  It’s just a little different than I imagined in my head.  The blue is more intense and the fabric is much thinner.  It’s even thinner than a typical quilting-weight cotton.  Could it still work for curtains?  Definitely, especially with a liner, but the color and weight made me rethink using it in this particular room.  These give off a more light and breezy summer vibe and the basement is going in more of a library/gentleman’s club sort of direction.

The good news is that I use blue throughout my house and it’ll be great for pillows, light slipcovers, and other projects.   I’m going to wash it and put it in my stash until inspiration strikes.  For now, I needed a new plan for the curtains. 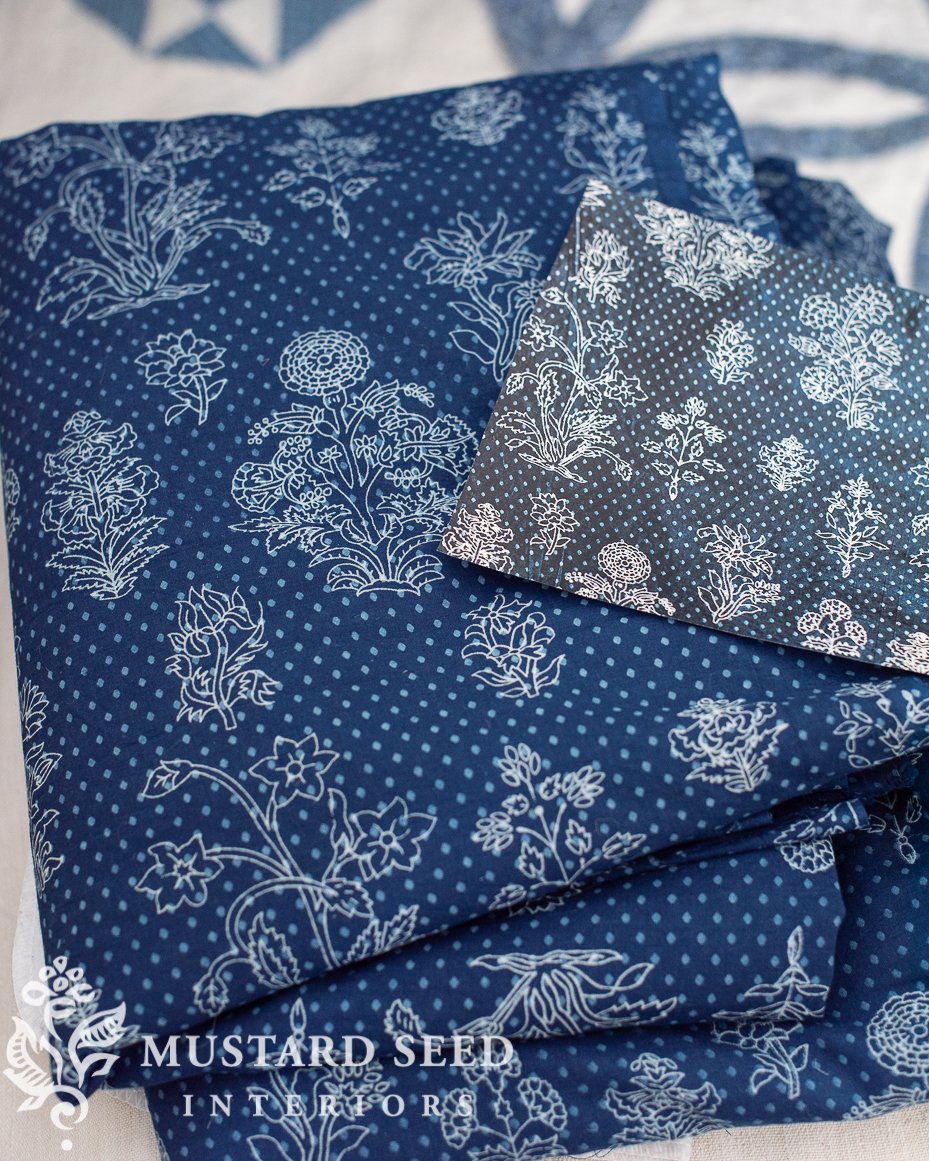 As a reminder, I have a neutral rug with blues in it, a gray corduroy sectional, reddish wood built-in cabinets, and I’ve chosen Farrow & Ball’s Oval Room Blue for the walls.  I still think indigo can be a good accent, but it might just be on a few pillows. 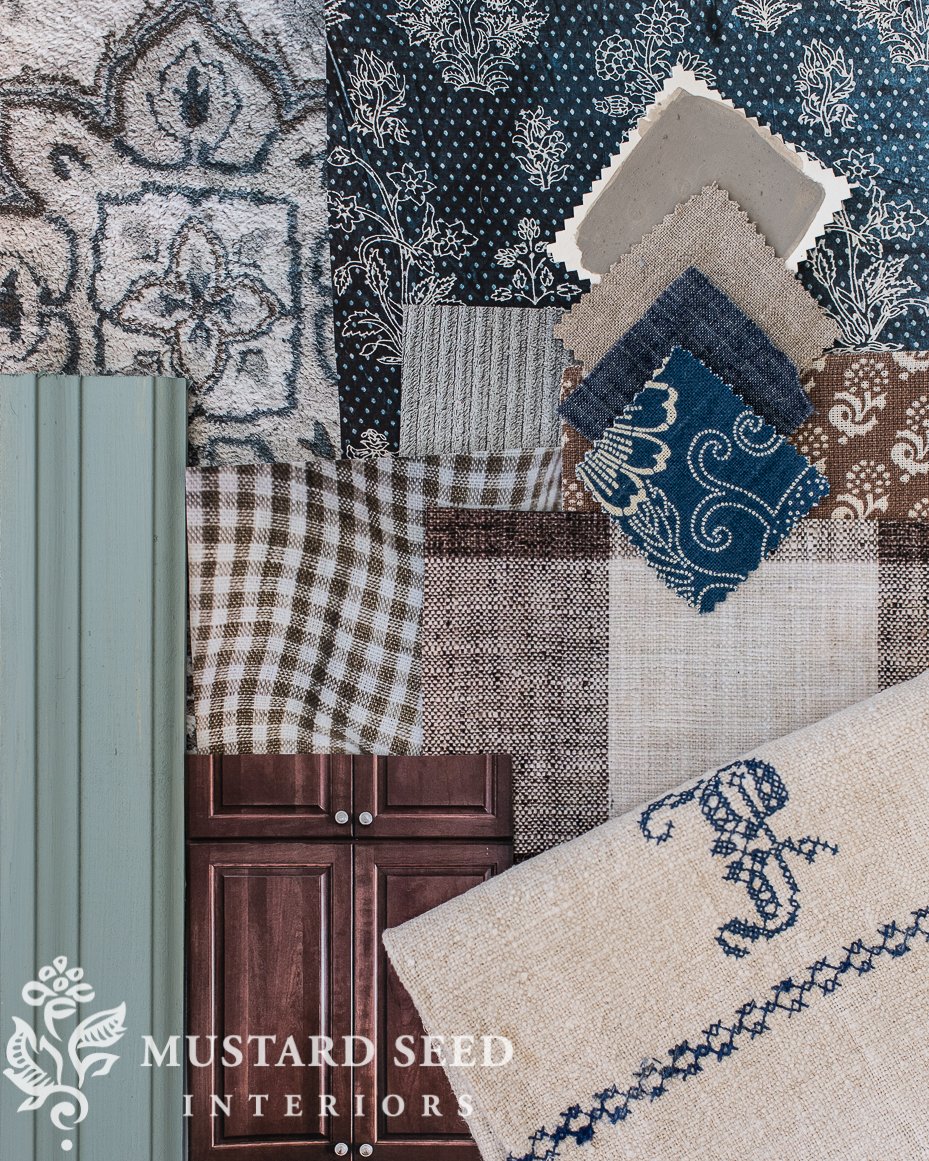 Going with a brown check on the curtains seemed like the next obvious direction to me, so I started looking back into brown checked fabrics.  When I work on a room, I tend to order one thing at a time, so if I need to pivot, I’m not too deep in!  In this case, I’m glad I ordered the paint and the indigo fabric and waited before I made any other decisions.

As I was looking around for brown checked fabrics, I decided to also look into premade curtains.  I haven’t used premade curtains in my house in a very long time…I can’t even remember the last time!  But, I happened to find a lined pair that was $40/panel on sale HERE.  (They have some other great colors, too!)  When I balanced that against the cost of making my own panels (fabric, liner, thread, header tape), it was going to be cheaper to buy them premade.  I can also return them if I don’t love them.  I ordered two extra panels to use for pillows or for perhaps slipcovering the square poufs.  I’ll play that one by ear once I can feel the fabric.  Again, I can return what I won’t use and I can always start over if I don’t like these, either. 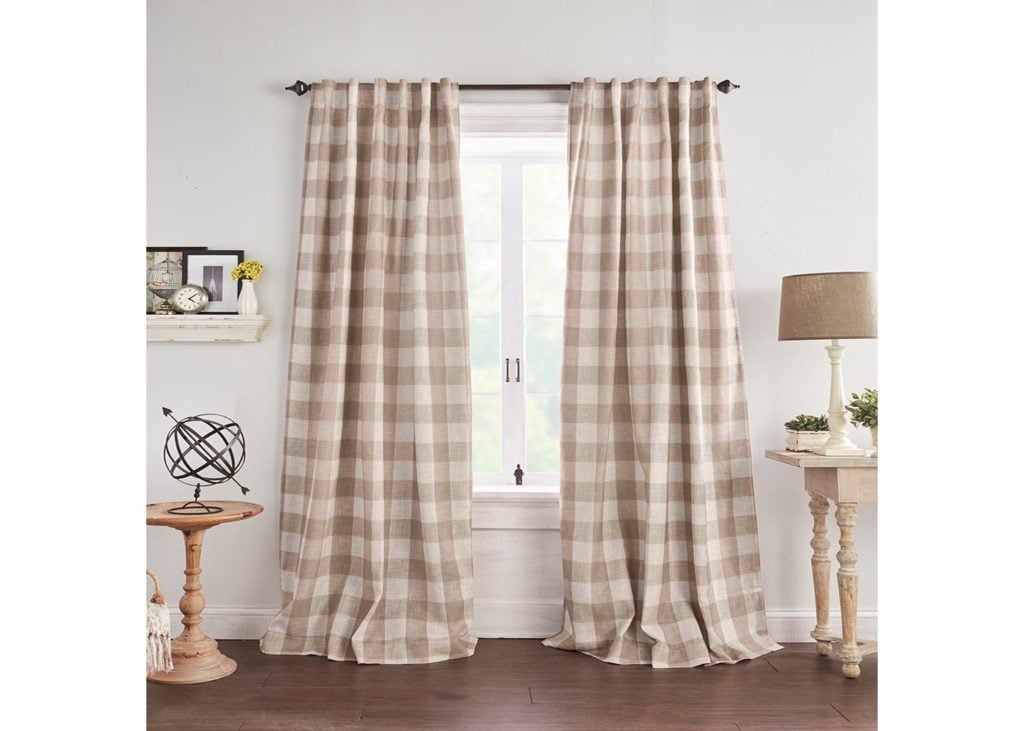 My next obstacle was finding a curtain rod that was long enough to span the window over the sofa.  I ordered a long curtain rod from Ballard Designs for a window of the same size in my living room, but they no longer carry one in that size!  So, I spent a lot of time looking around online.  It turns out, if your window is over 10′, your options are pretty limited.  I ended up finding a website that sold 12′ wooden rods that were reasonable.  (THIS is where I bought them.)  I was able to order everything I needed (brackets, poles, finials, rings, and rods) for about $250 for both windows.  I went with the mahogany finish to coordinate with the built-ins, but the nice thing about wood is that I can always paint them if I change my mind.  I think the wood will look nice, though.

While we’re on the topic of the basement, let me take a minute to do a better job at showing you the scope of the project.  I literally went downstairs and snapped photos without tidying up and I’m not cropping things out just to show the flattering parts.  You’re getting the whole basement family room/playroom space.

Last summer, when many things in our state were still closed (including gyms), we decided to be “fun parents” and installed a climbing wall in the basement for the boys.  They both do climbing as a hobby and their sport.  They’re on the local climb team and do competitions and everything.  (It’s a new world to me!)  Distance learning was a bummer, ordering produce online was a challenge, we really missed seeing people and being in the church building and all of the things you probably experienced as well during the shutdown.  But, the thing that took the greatest toll was the boys not being able to climb.  Not only is it great exercise for them, but they are a part of a community there and, even if they couldn’t articulate it, we noticed how much they missed it.

So, we installed the climbing wall.  Now that the gym is open again, they don’t ever use it.  We realized our hearts were in the right place with it, but it maybe wasn’t the best idea for the long-term and we’ve decided to take it down and make better use of that space. 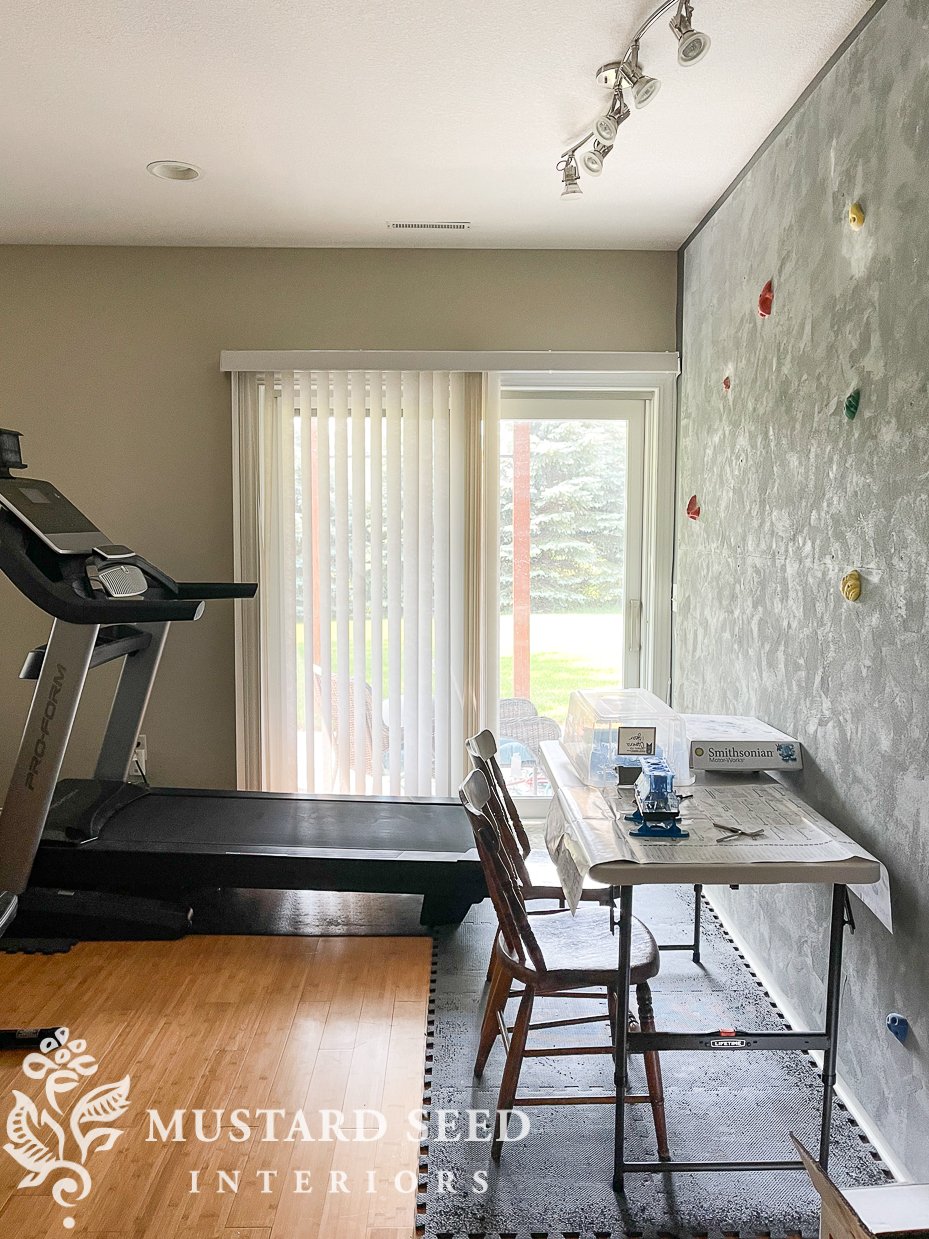 As you can see, this little area is used for exercise gear and we have a folding table set up for puzzles, games, and projects.  The problem with asking this little space behind the sofa to do so many things is that it doesn’t do any of them very well.

The vertical blinds are coming down and the climbing wall is coming down.  The exercise stuff will be moved into the playroom, which I’ll show in a minute.  This space will then be a place for puzzles, games, building engines (that’s what’s happening on the right side of the photo below), and other things of that nature. 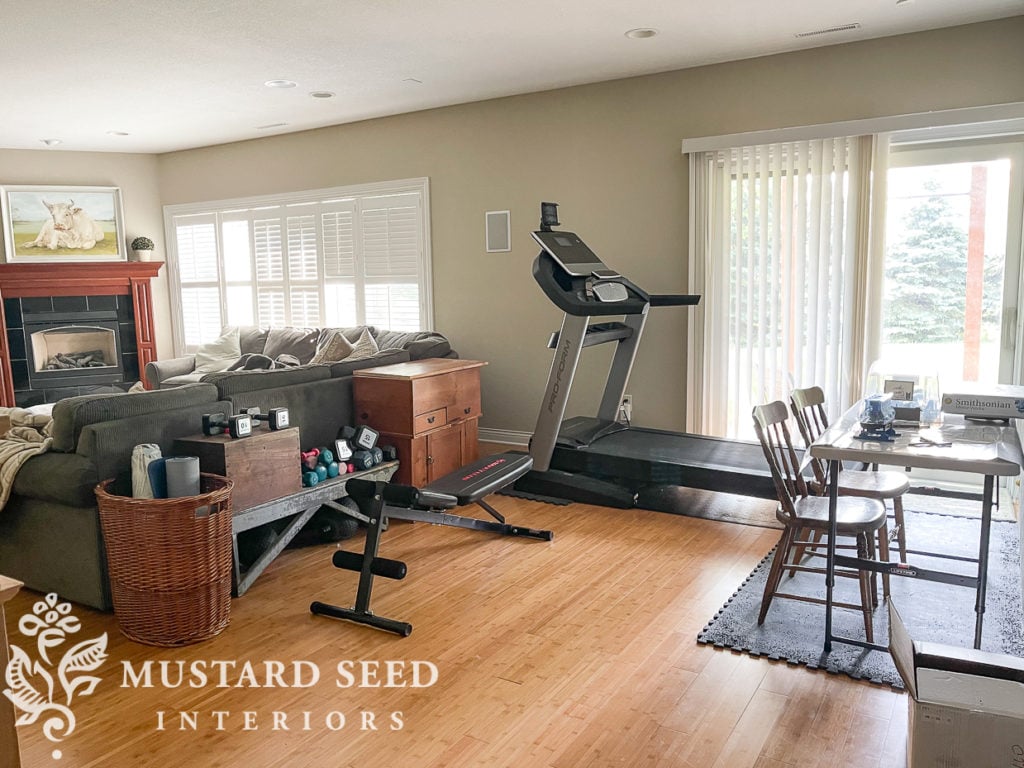 I haven’t painted in this room, yet, except for the back wall.  I used some of the extra paint from the playroom and painted over an eggplant color.  I didn’t mind the greenish-beige, so that’s stayed.  It’s actually a really pretty color.  I wish I could tell you what it was, but it was on the walls when we got here.  It’ll all be painted with Oval Room Blue, though.

Aaaaand, this is the typical state of the family room.  Squashed pillows, trash, drinking glasses, dog bones, games.  It’s in the basement, I so can just close the door and not look at it and I know it’s important to have spaces in the home that are a bit more relaxed.  This is one of those spaces, so I don’t run around fluffing pillows and folding blankets unless we’re giving it a good cleaning or have people coming over. 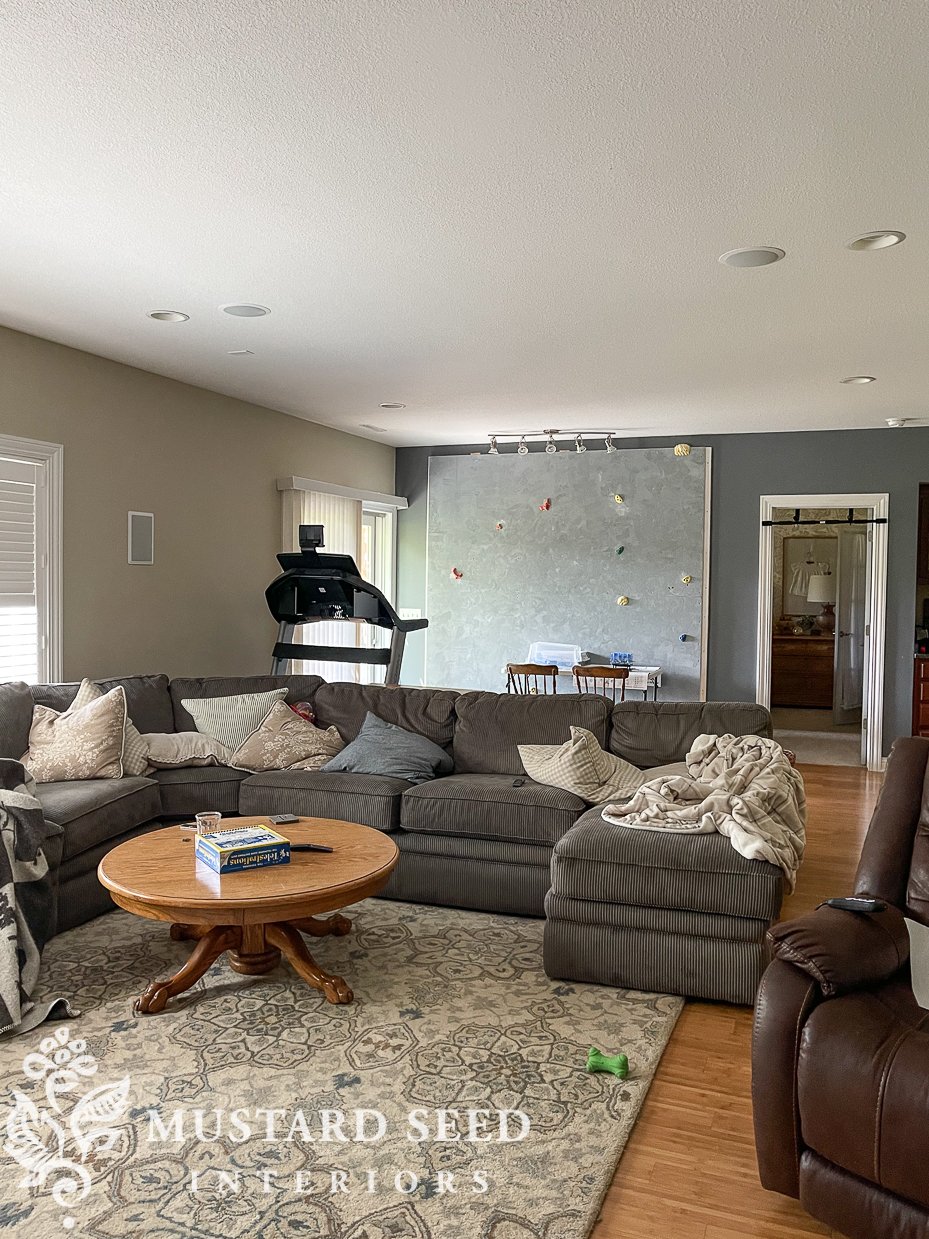 We also have an awkwardly placed recliner from when I had my shoulder surgery.  We really don’t have a good spot for it, so it sort of floats in the room, positioned in a spot that’s good for movie nights.  I am not a fan of recliners in general (there are some beautiful ones out there), but I had to sleep in this one for almost two months, so I came to really appreciate it! 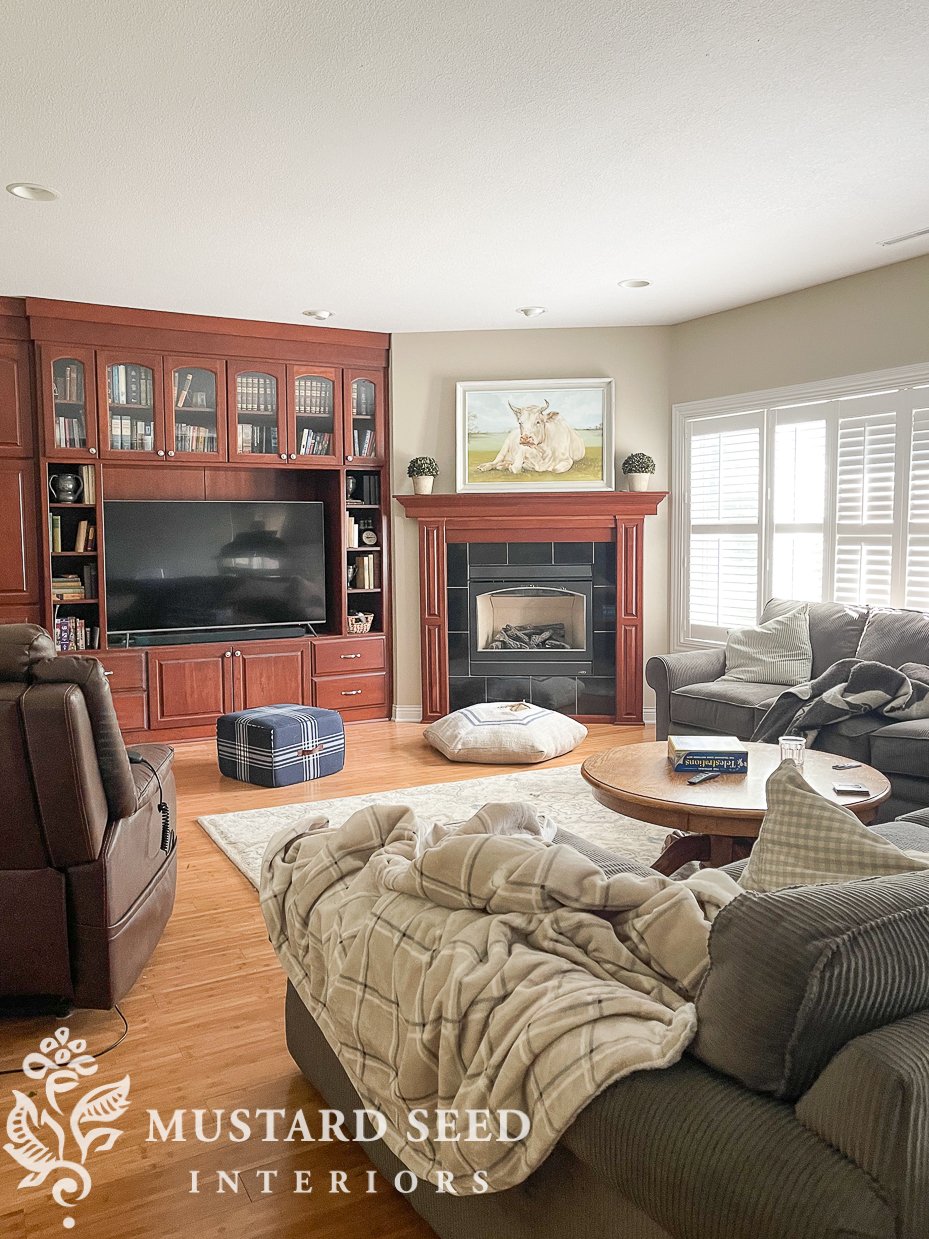 On the other side of the family room are the steps, a wet bar, a full bathroom, a linen closet, and the utility room.  All of this will be painted as well, including the wet bar cabinets and the banister.  Oh man, I have sooooo much painting to do down here!  I’m definitely going to have to break it into small chunks over a couple of weeks. 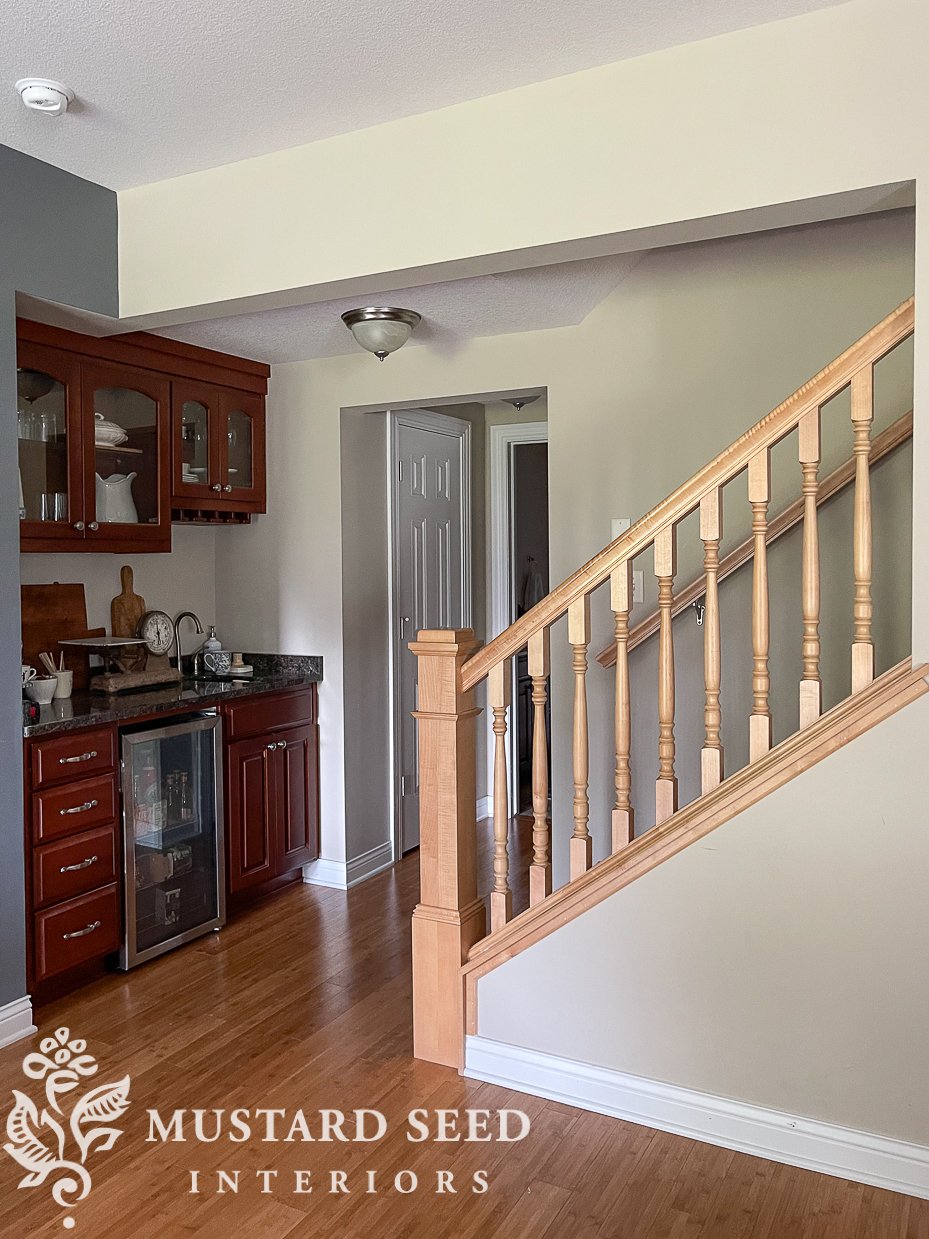 And, I’ll be painting up the stairs as well.  Now, I would love to rip out that carpet.  It is too hard to keep clean (mostly because of pet hair), but I’m afraid we might be dealing with particle board steps like we had on the main staircase.  There is a chance these are wood treads with a rounded edge, but I’m not hopeful enough to rip up the carpet.  Just yet. 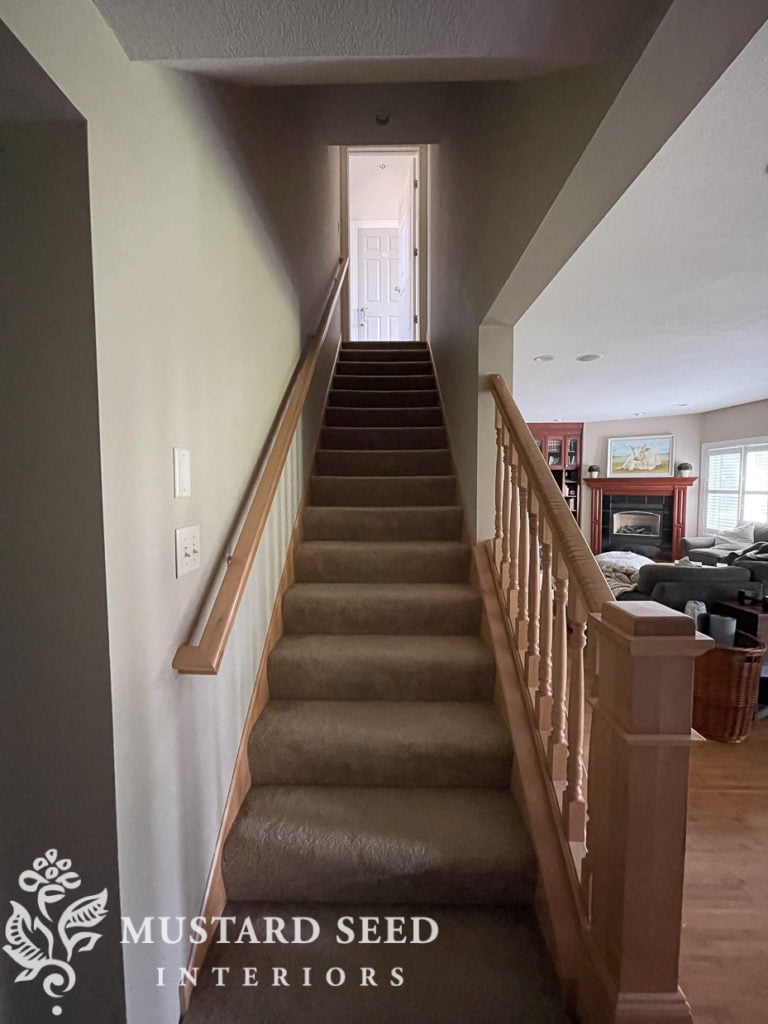 The other piece of this puzzle is the playroom.  The boys and I have been slowly working through it to get rid of toys they no longer play with and consolidate the remaining toys into the closet, so we can use this as an exercise room. 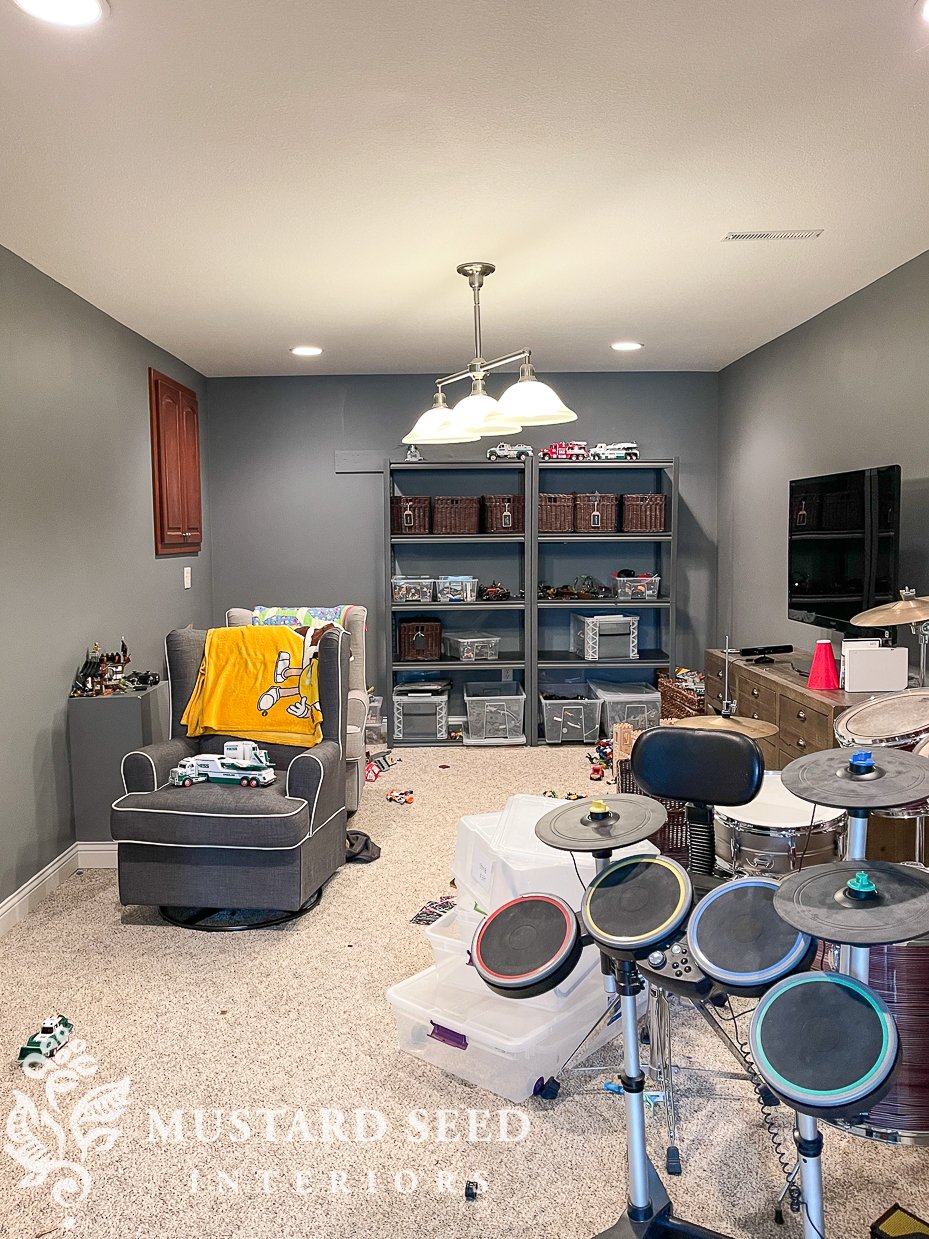 The shelves will be going elsewhere, the chairs will be moved and slipcovered, and the drumkit is going back to the person who let us borrow it.  Everything else will be rearranged to suit using the treadmill, doing exercise programs on the TV, etc.  There will be enough open space that this can double as a playroom, too, but the boys will have to clean up when they are done.  I anticipate more playing will happen on the family room floor, anyway, since that’s what happens a lot now. 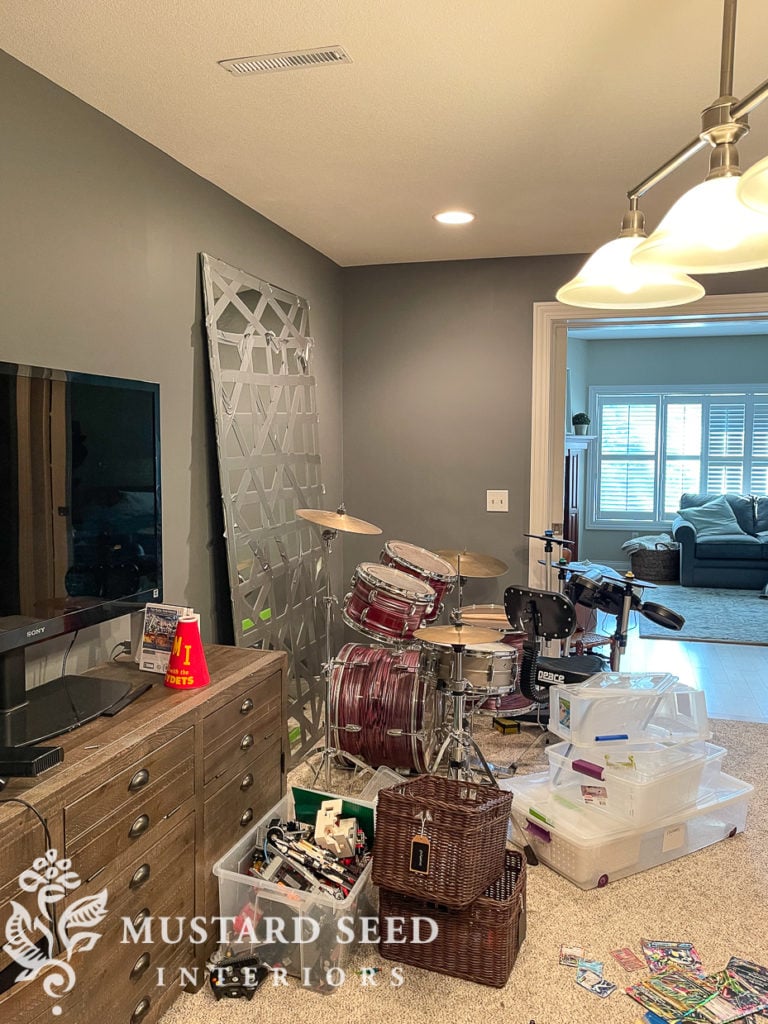 The mirror is from our bathroom makeover and we’ll hang it down here vertically.   We also need to finally replace that light.  It was obviously meant to hang over a game table (pool, ping-pong, air hockey), so it is so low and is always getting in the way.  It’s time to take it down. 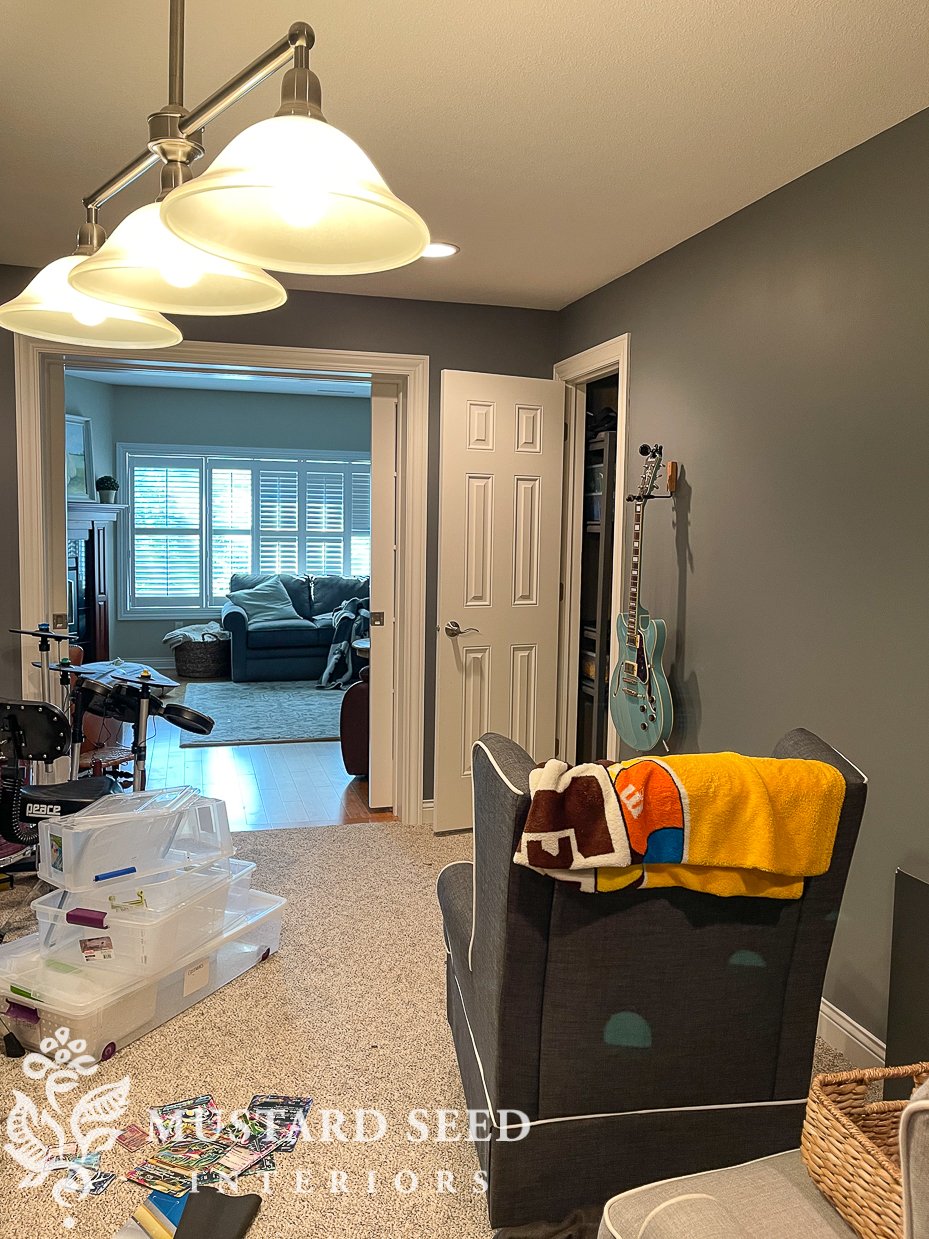 This room is never going to be photogenic or pretty, but it is a very nice space to have and we want to make good use of it!  Here is the progress we’ve made so far at getting the toys moved into the closet… 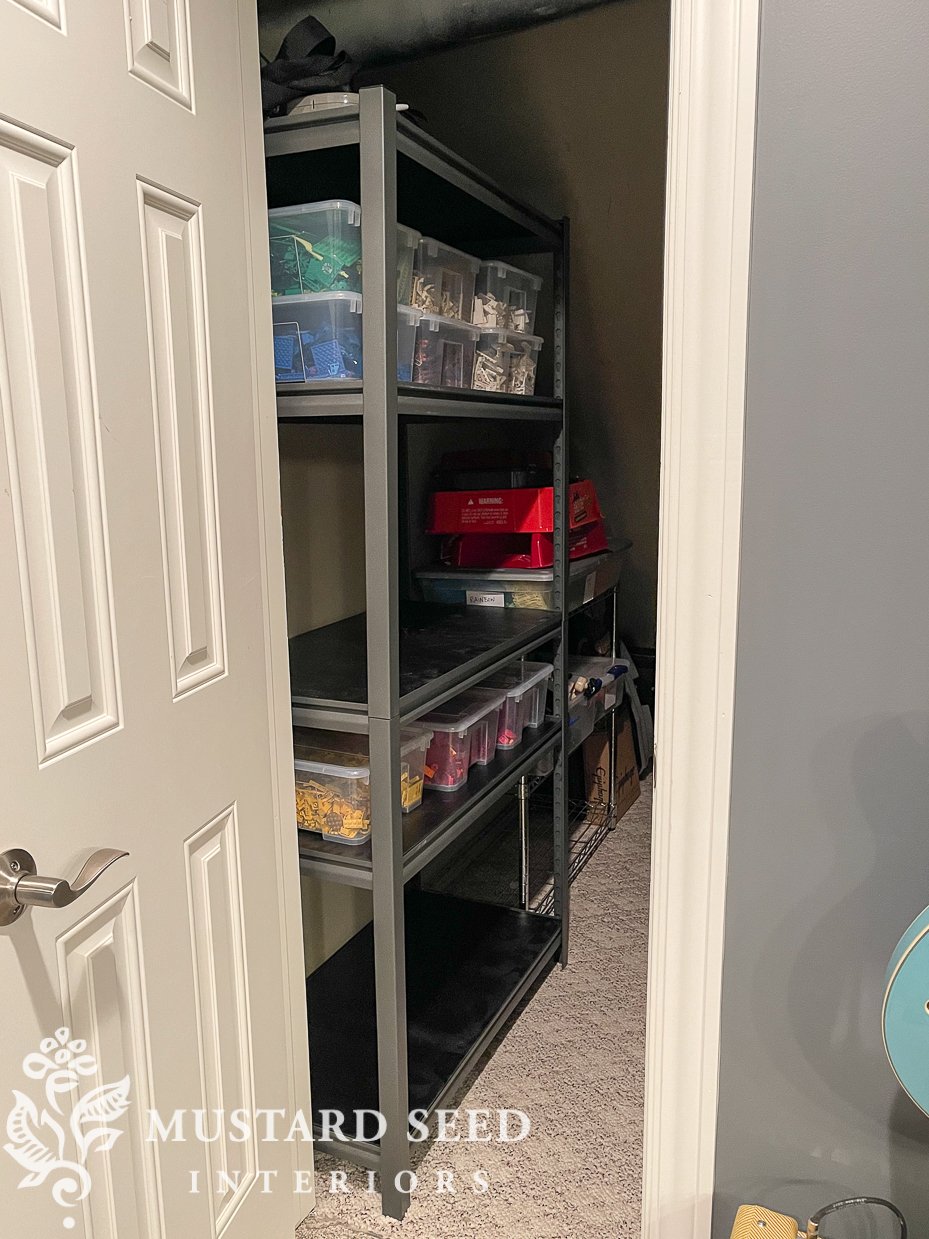 The funny thing is that I tried to move that shelf by myself by dragging it across the floor.  It slowly fell to pieces as I pulled it across the Berber carpet until it was just a heap of parts right in front of the door.  I was laughing so hard at the ridiculousness of it.  I ended up having to put the entire thing back together anyway, so I should’ve just taken it apart in the first place.  Oh, the things we do when we’re trying to save time!

So, there you have it!  The full picture of the basement and the reasons why I’ve been putting it off for so long!  It’s going to be a lot of work, but it’ll all be worth it.

I’ve noticed in this home, which is larger than our last one by about 1,500 sq feet, that it’s easier to waste space when you have more of it.  It’s easier to neglect rooms you don’t use very often and it’s easier to let things pile up in those rooms.  It’s easier to say yes to things like climbing walls and borrowed drum kits.  And it’s easier to feel overwhelmed at the idea of making that space truly feel like your home.  It’s easier to not have a house full of favorites.  There’s something to be said for having plenty of space and rooms with versatility, but there’s also something to said for only having the space you use and maintain in a meaningful way.  This house is perfect for us now, but we already know we want a smaller home whenever we move again.  Until then, we’re going to make this “bonus area” inviting and functional.