When it’s rainy and glum, Kriste and I usually drag ourselves around the studio, giving ourselves pep-talks to get something accomplished.  For some reason, it’s harder to be creative and productive and ready to tackle the world when the weather is blah.  But, today was drizzly, cold, and gray, yet it was still, despite all odds, an amazingly productive day.

I feel like celebratory hot chocolates are in order.

Unfortunately, it was so dark outside that I didn’t take any pictures of what we were up to, but I will share what we accomplished in a post soon.

Until then, I’ll share what I did over the weekend.

I made gingerbread houses and ornaments for the first time last year and I absolutely loved the creative process and incorporating the gingerbread as a part of the holiday decor.  It smells amazing and, come on, what is more homey and sweet than gingerbread?

I do make mine from scratch.  I really like starting with a lump of dough, because it’s full of possibility!

This traditional gingerbread recipe from The Food Network is the one I used.  Actually, I started out making a different one, but it required shortening, which I didn’t have in my pantry, so I switched to another recipe that used real butter, which I preferred anyway.  I was able to make adjustments mid-recipe, so it all worked out.

I knew I wanted to make some hearts, like I did last year, so I did… 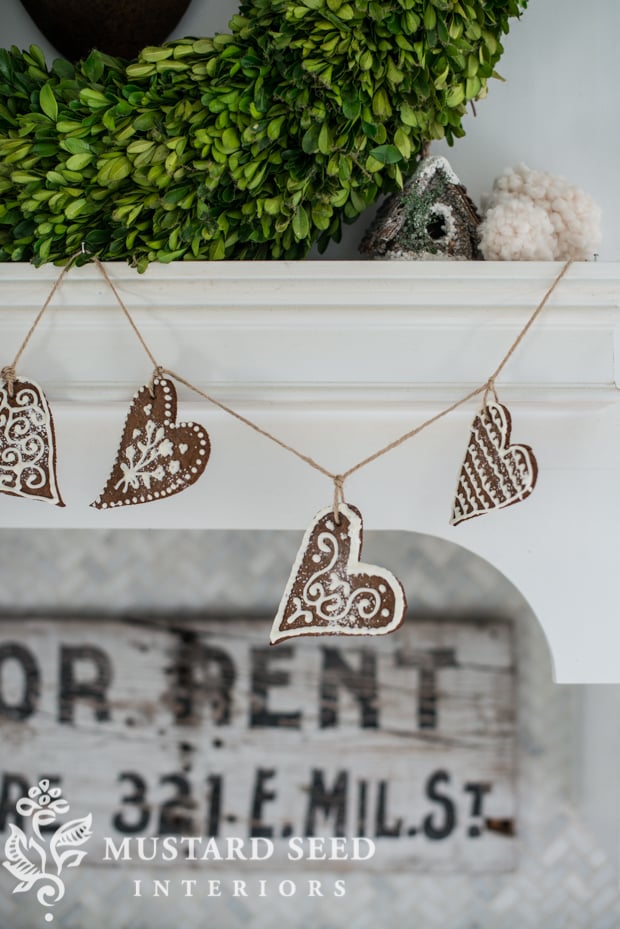 I poked the holes in them before baking and then strung them on some twine once the icing has hardened.  (I almost said cured, like I’m talking about paint!).  The garland is hung from the range hood, which is perfect, since it’s right over the stove.  I don’t want to put garlands of poisonous berries or something right over our food!  If a cookie or piece of icing falls in…well, it might make for an interesting dish (I’m thinking lentil soup with a hit of cloves, all-spice and cinnamon), but it won’t kill anyone!

I don’t use cutters for the hearts, but cut them out freehand with a knife, so I can make them just the shape I want.  I prefer hearts that are a bit more elongated and less rounded than most heart cutters.  I know.  Picky, picky.  But those little details do make a difference.

And, of course, I made some houses.  Well, two as of now, but I am going to make a few more later this week. 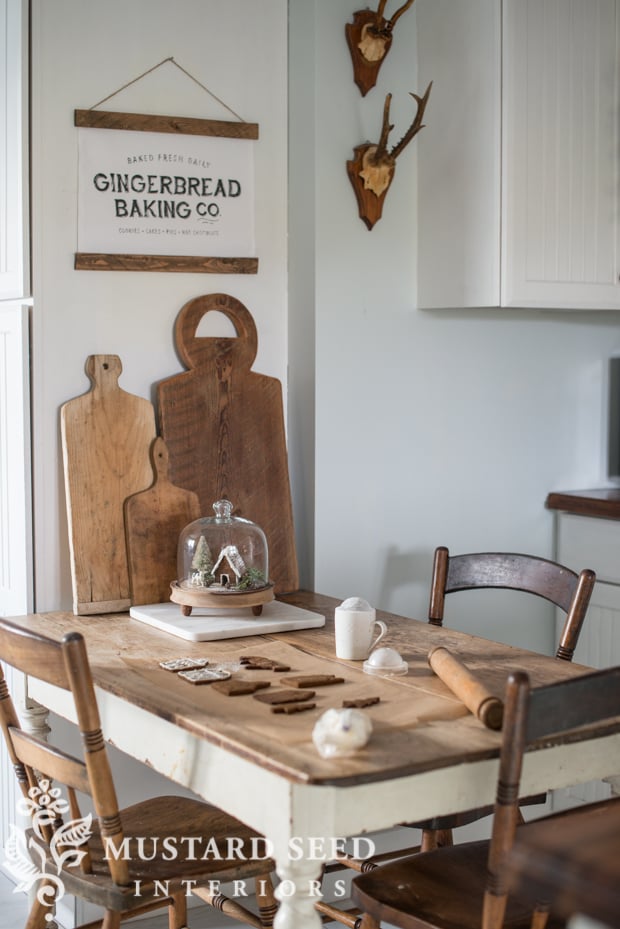 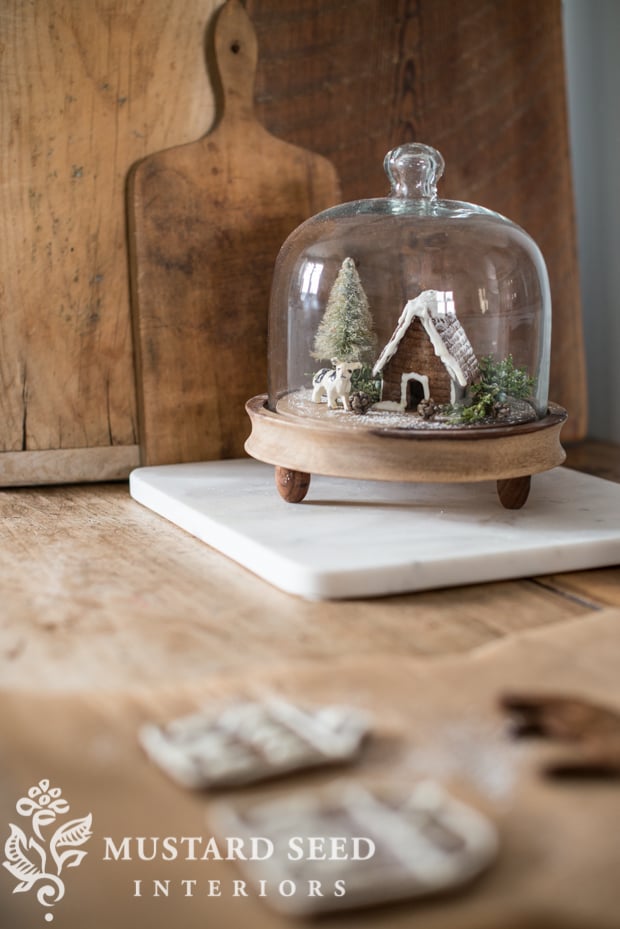 I made a large house last year and it took a lot of dough and was a little tricky to assemble, so I decided to make several mini/small houses as opposed to one big one. 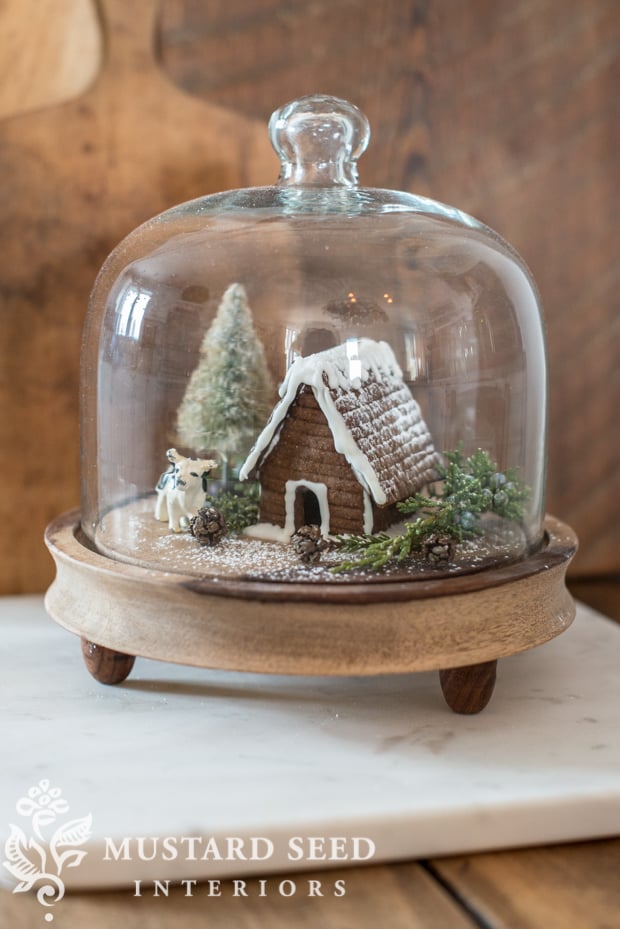 I put this house under a cloche with some fresh greenery, a mini bottlebrush tree and a tiny vintage cast iron cow.  A dusting of powdered sugar finished off the little scene. 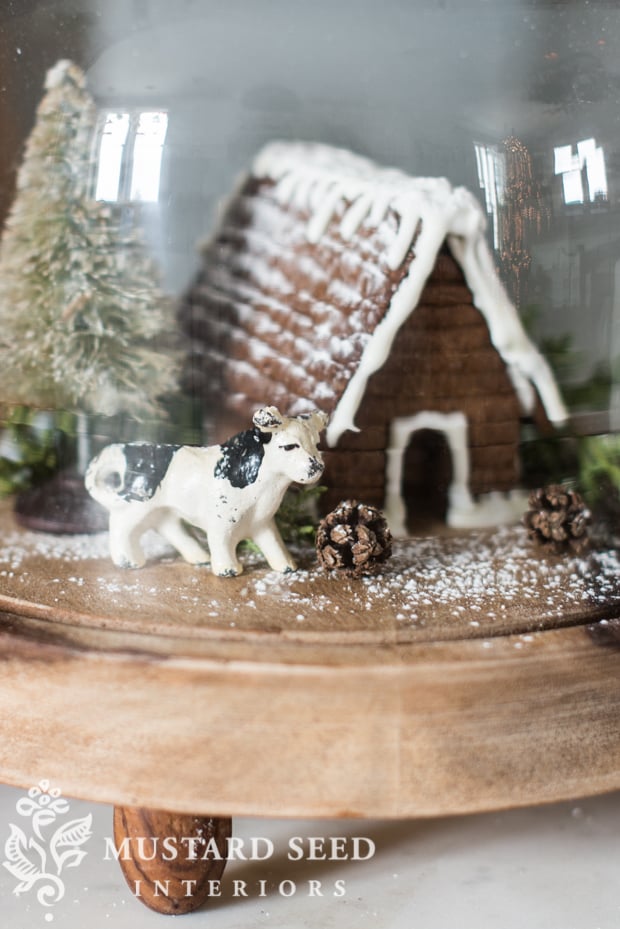 By the way, I make some gingerbread cookies for eating and then some for decorating, like this house.  As I mentioned earlier, I wouldn’t put inedible fresh greens next to something we were actually going to eat.  The houses are just for decor.

Speaking of what’s made for decor…I had some gingerbread hearts hanging from the cabinet knobs in the dining room last year.  Over the season, they kept losing more and more of their icing.  I figured I was bumping into them when I was vacuuming or something like that.  Well, I later learned that my oldest son (not the one with T1D), was picking off the icing bit by bit when no one was watching!  Well played.

Anyway, I made some house-shaped cookies, too.  This batch of icing was a little runny, so the details sort of melted into one another, but I’ll thicken it up a bit when I make the rest.

Oh, speaking of icing, I learned something interesting!  I bought some organic powdered sugar for this project, which was a little silly in hindsight, because it’s still white powdered sugar, but it seemed like a good idea at the grocery store.  Anyway, DO NOT buy organic powdered sugar for royal icing unless you would like your icing to be an unappetizing beige color.  It was the craziest thing.  It was white in the bag and as soon as I mixed it with egg whites, it would turn beige!  So, I sent Jeff to get some reliably white ordinary powdered sugar. 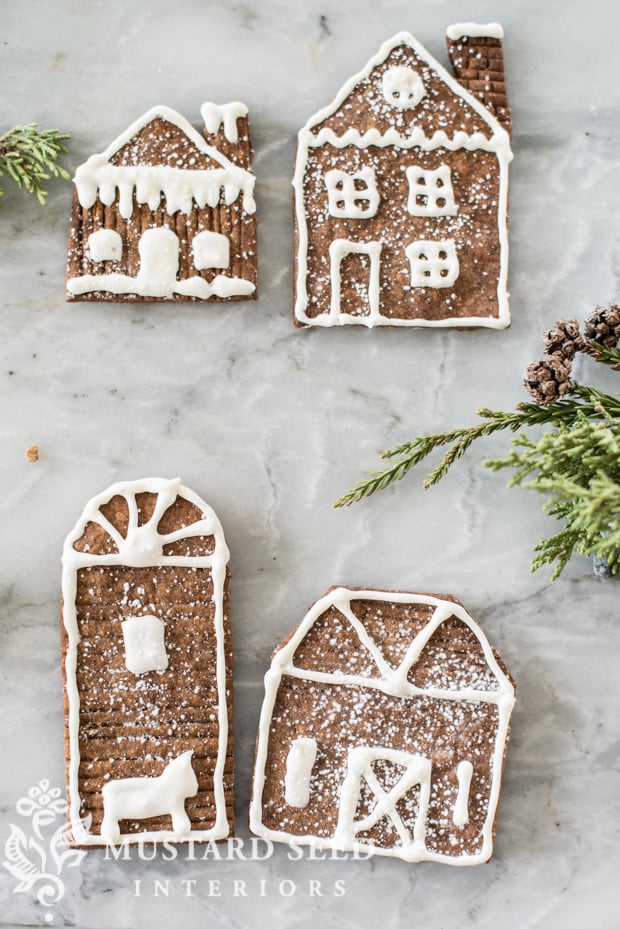 If you’re thinking about making gingerbread this year, here are a few tips (in addition to the powdered sugar thing)…

Any “gingerbread experts” have anything else to add?

And, for a little more gingerbread-spiration, these are a couple from Instagram that inspired me…

I had to share a closer image of @carr_bethany gingerbread village she baked and decorated. I had a hard time getting a close up shot of the village You can find the templates and recipe on @betterhomesandgardens website. We couldn’t find our cake decorating tips so she just cut the tip off of a zip lock bag to decorate them. Wreath is from @wintersteenfarms Cake stand and marble cheese boards are from @williamssonoma

A photo posted by Dreamy Whites Lifestyle (@dreamywhiteslifestyle) on Dec 2, 2016 at 9:06am PST