Calvin has expressed an interest in art off and on for the past few years.  He’ll ask to paint with me or request that I buy him some art supplies or a sketchbook, but he hasn’t stayed motivated in that arena.  But, anytime he asks, I say yes.  I can see he has a natural inclination for it and I think his mind is well suited for creative work in some shape or form.  So, when he asked me if we could take an illustration class together, I pulled out my laptop and we started watching course trailers immediately.

We found a class on Domestika – The Art of Sketching; Transforming Your Doodles into Art and it has been so much fun working on it together.  He took notes as the instructor was going over his influences and wanted to make sure we had all of the right tools to get started.  The first 30 minutes of our first session was spent fiddling with fountain pens and getting ink all over my hands because he was insistent on using one!

The first exercise in the class is to draw your supplies in pen & ink, which I enjoyed.  I love art supplies and drawing them was so satisfying! 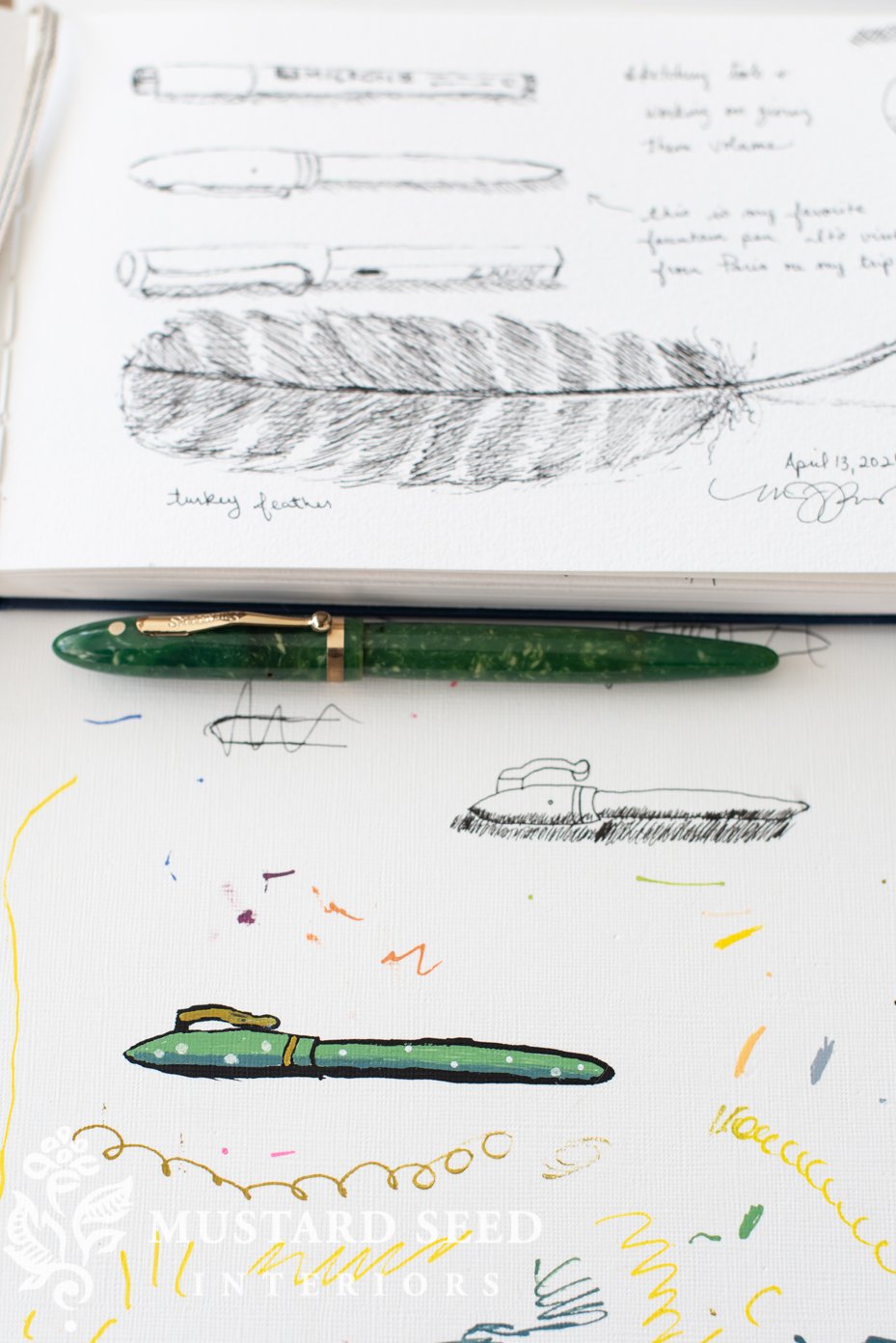 Calvin was discouraged with his drawings at first.  I told him that even great artists sometimes hate their own work.  Just draw it again and then again and then again.  You’ll learn something each time.  He drew my vintage fountain pen about eight times until he was happy with the last two.  I could see in his face that he was so proud and he told me I could share it on Instagram and my blog, which is saying a lot!  If you wonder why you don’t see a bunch of pictures of my boys or hear stories about them, it’s because I always ask before I share something and I don’t ask very often.  Their rooms are their rooms.  Their work is their work.  Their story is their story.  If they want me to share it, I will.  If not, I respect that.

Anyway, he wanted these to be shared not only on the blog, but he ran upstairs to show Jeff and gave him a play-by-play of his discouragement and then victory.  He even told me to tell my readers that it took him several tries to draw a pen that good.  They shouldn’t give up after the first few.

Even though illustration isn’t my thing, I am learning a lot, too, and enjoying the exercises.  It’s showing me where I need to work on values and drafting and I’m learning a lot about sketching with a fountain pen. 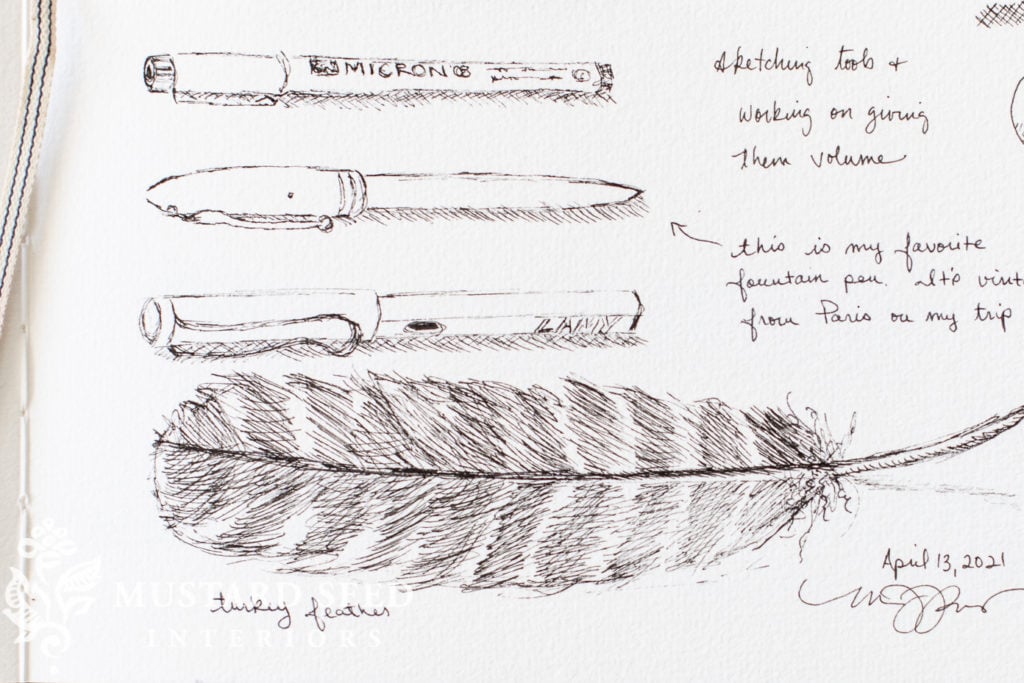 The next evening, we drew utensils… 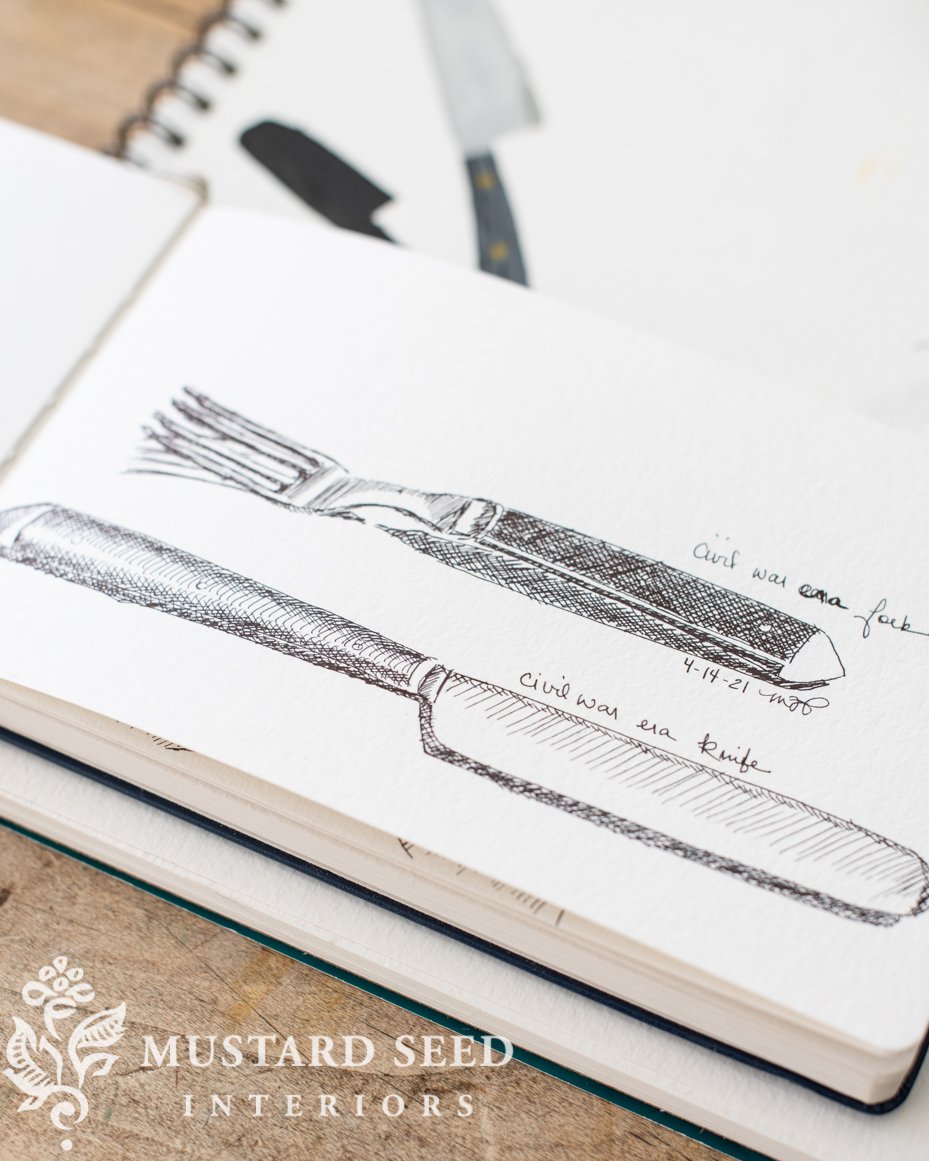 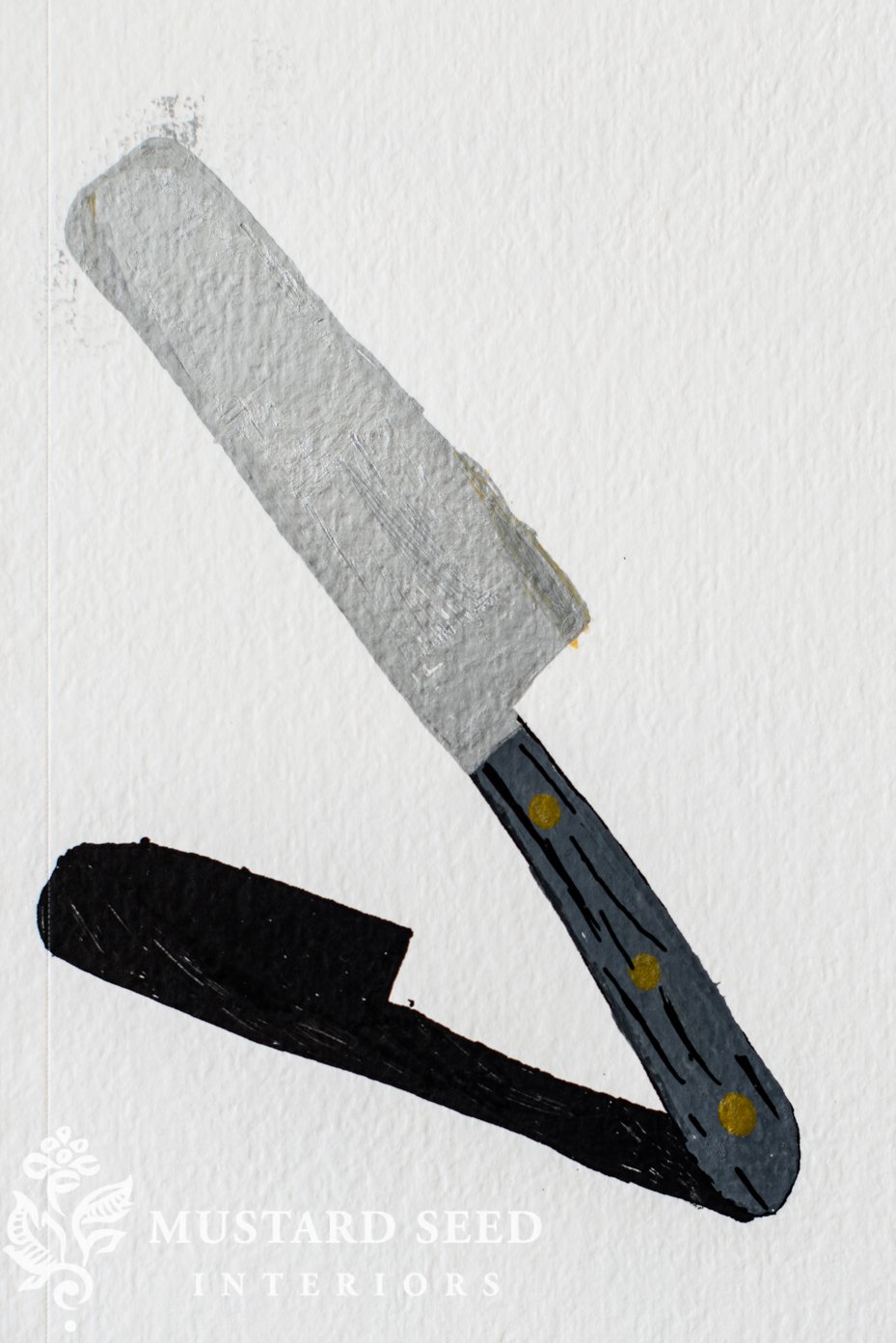 Calvin likes using acrylic paint pens to get more of a cartoon/video game look while I’ve stuck with pen & ink.  I was very impressed with his shadow and how he captured that the knife was leaning up on the edge of a basket and cast a heavy shadow.

The next exercise was right in Calvin’s wheelhouse but pushed me out of my comfort zone.  We had to draw our supplies from memory and get creative with them.  Calvin drew pencils with wings and jetpacks and created little utensil and pencil families. 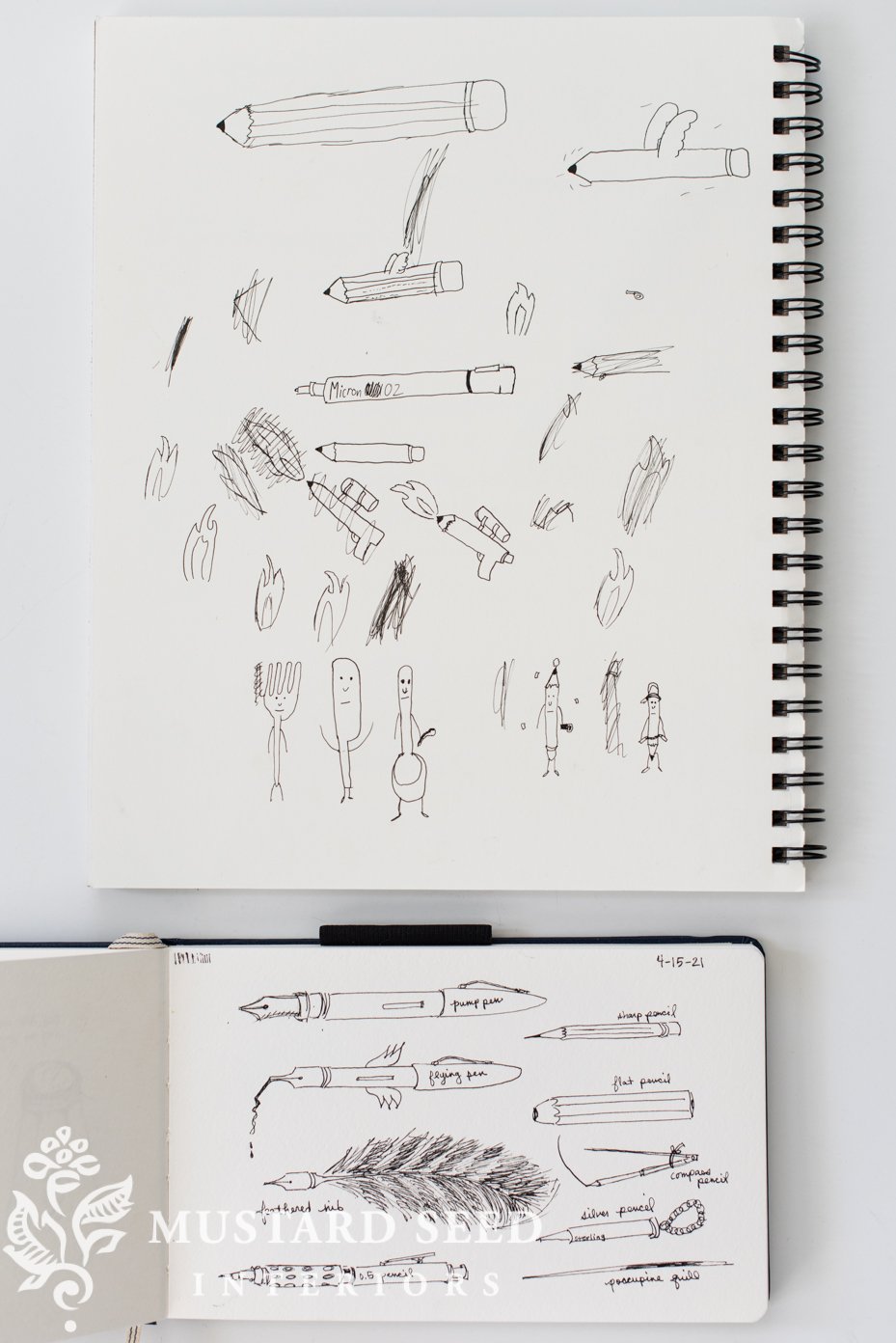 I put one pair of wings on my fountain pen and then kept drawing supplies!  Since then, I have drawn little families of instruments and shoes, but Calvin’s were definitely more creative.  Imagine a Croc becoming a British Royal Guard’s hat.  The heel strap became the chin strap and the little holes on the top emulated the textured fur.  It was pretty clever! 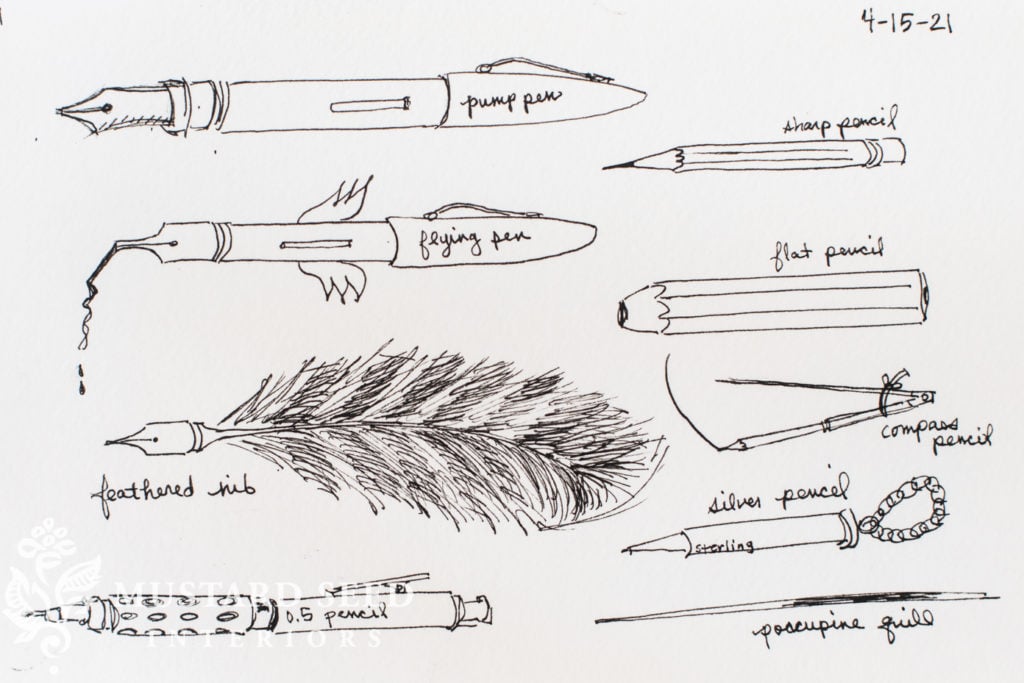 We still need to finish the course, but the best part is it’s gotten us both sketching daily.  I’ve completed 2-3 pages a day in my sketchbook since we started.  I’ve continued to draw supplies, but I’ve also started sketching pictures I took while in France and Italy. 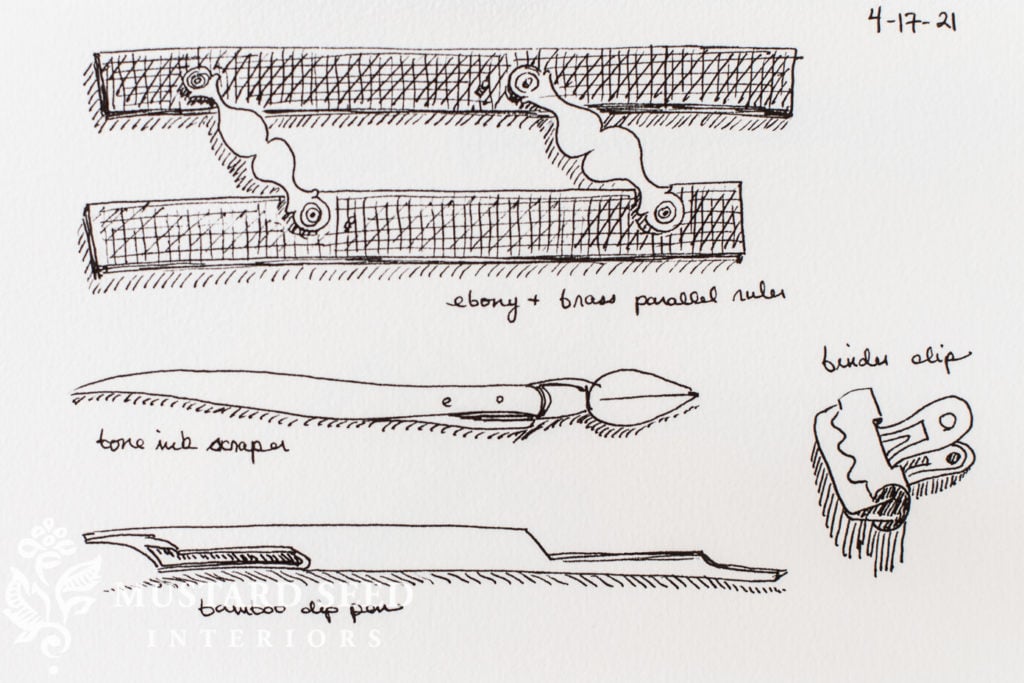 I took all of those pictures with the intention of doing a bunch of sketches and paintings and I’ve not followed through on that.  I’ve always been nervous about all of the details and angles and lines in the buildings in Paris, but now I’m just going for it and, I must say, I am surprising myself.  I’m far from being a great pen & ink artist, but I feel like I can sit and sketch out a building or city scene with a bit more confidence the next time I’m traveling. 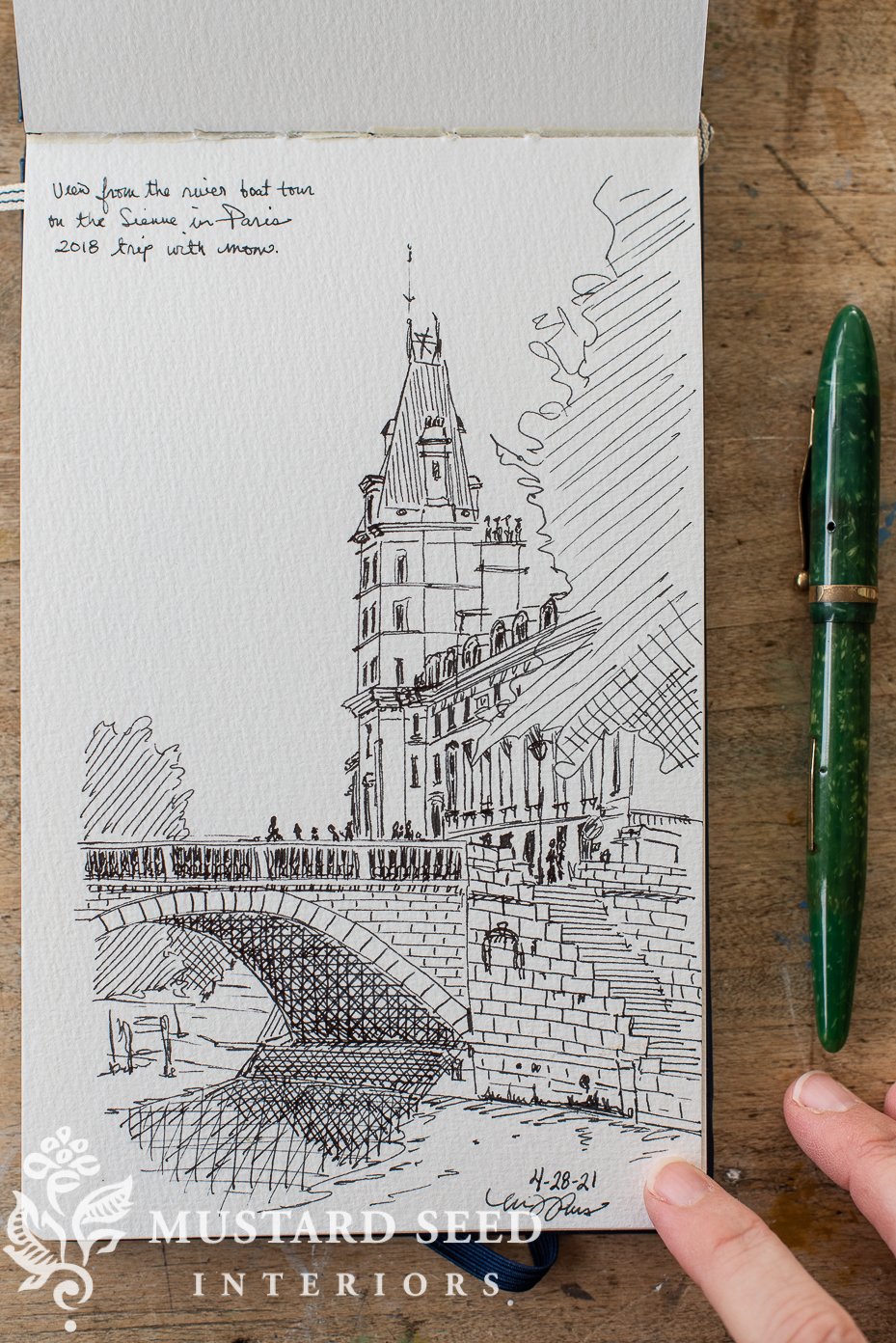 I’m even adding people so the scenes don’t look like they were sketched during an apocalypse. 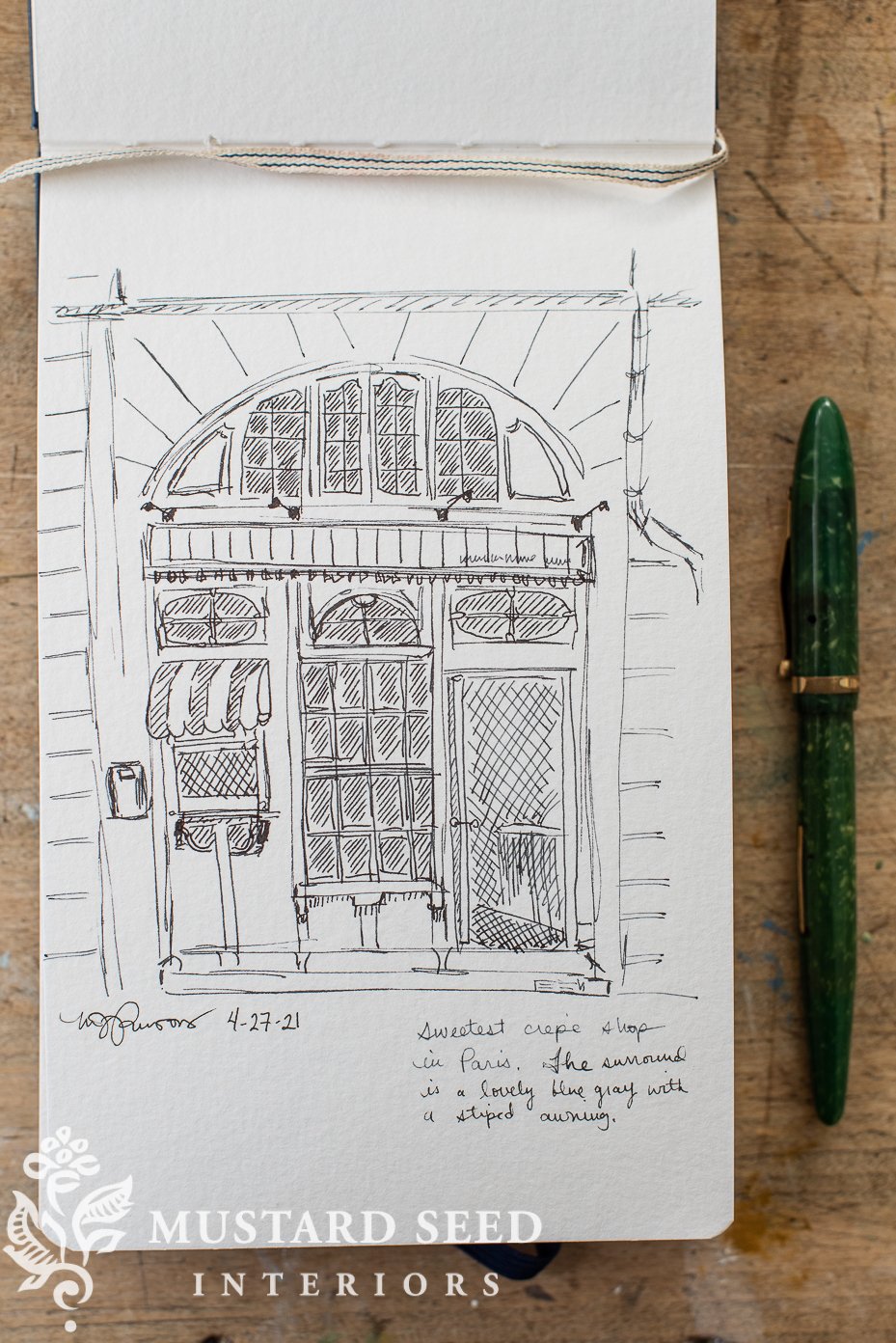 The best part is that I’m enjoying reliving the memories.  I took the pictures because they caught my eye and now I am taking the time to really study and appreciate them.  I can remember where I sitting or standing, why I stopped to snap the photo, what it smelled like, and sounded like.  I remembered poking through the narrow aisles at Shakespear & Co, determined to find a couple of books from the place Hemmingway frequented.  I bought a book on Paris Impressionists and a book on fabric and textile designs.  My mom and I had lunch at a cafe shortly afterward, so we could sit and rest from all of the walking, and I browsed through my books. 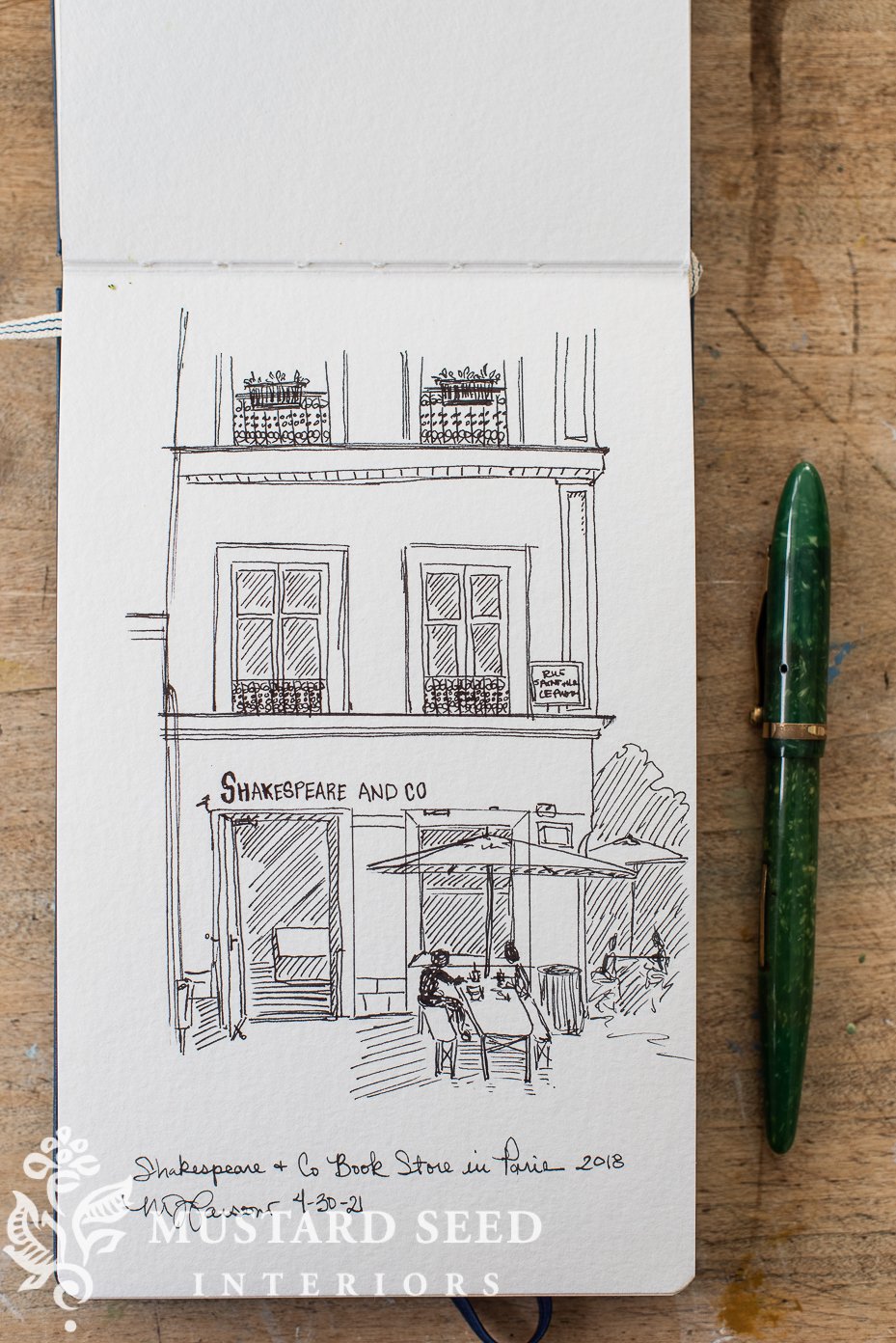 It would’ve been easy for me to tell Calvin that illustration is not my thing and he was on his own.  But the class has been good for both of us and we’re already talking about what class we’ll take together next… 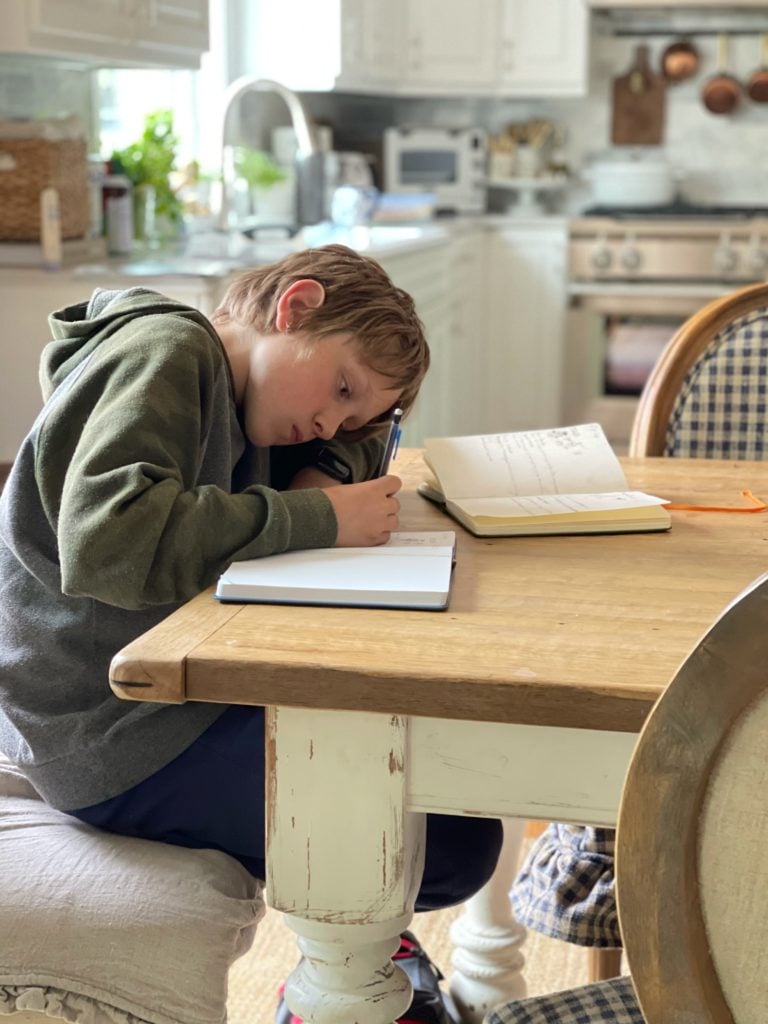 PS – I’ve created a bit of a monster in that Calvin is becoming an art supply snob like his mom and he’s even asking for his own “art room!”  I told him he could use mine any time.