Well, when we were in Barga this year, we were asked by Dana (our host & guide of The Inspired Tourist) if we’d like to attend a cooking class.  Of course, my mom and I signed up for that!  When you have a chance to interact with locals through an experience like learning to cook local dishes from them, you take it.

So, one afternoon, we headed over to La Mezza Luna, a bed & breakfast and cooking school, for Tuscan style cooking and dining with Rita.  It also happens to have a beautiful view. 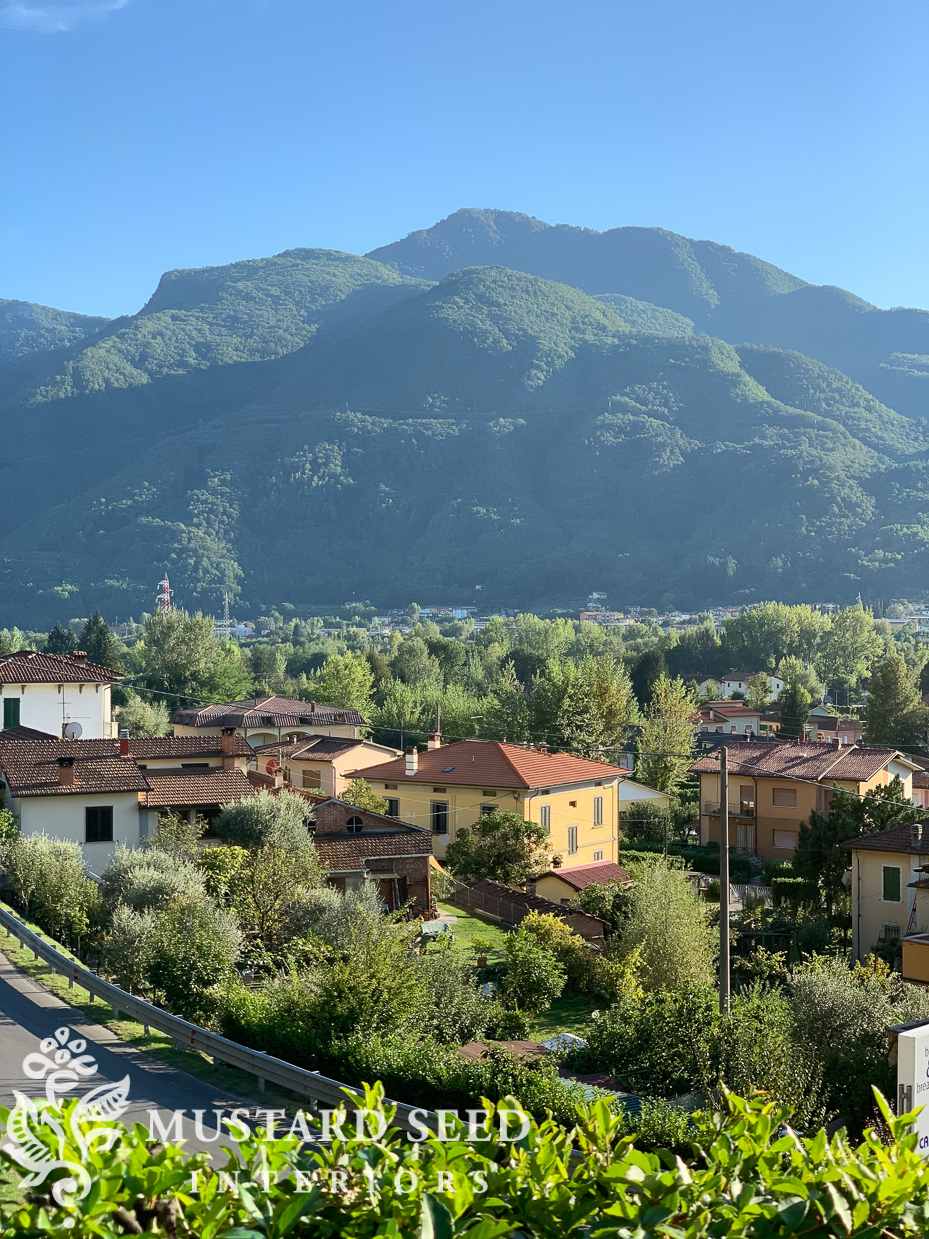 Rita was one of the most delightful people I met on our trip.  She is warm and boisterous; an Italian woman born and raised in Scotland.  Because of her Scottish upbringing. She still speaks English with a thick accent.  So much so, that you almost forget she’s Italian. 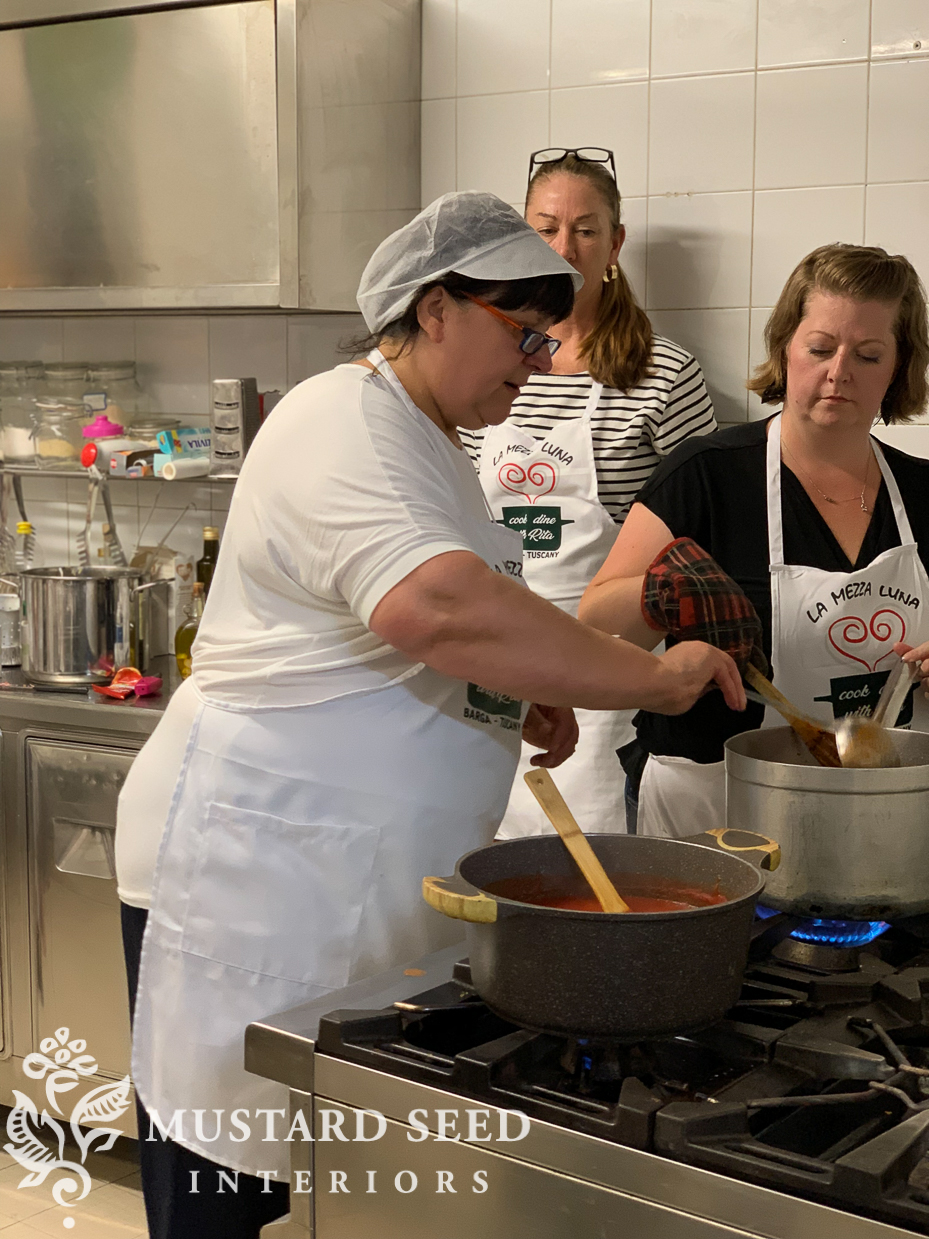 Rita assessed group, which was the largest one she’s ever worked with.   She tried to calculate how much time it would take us to make all of the food, but she finally resigned and said, “I have no clue what time dinner will be ready!”  It didn’t really matter, anyway.  We were there for the experience and had become used to eating dinner at a late hour.

We were led into the kitchen where Rita taught through making three different sauces. The sauces would be used on our handmade pasta and gnocchi.  She made Pomodoro which is a traditional vegetable tomato sauce, a Ragu, which contains meat, and a mushroom cream sauce.  She also made the spinach and cheese filling for ravioli. 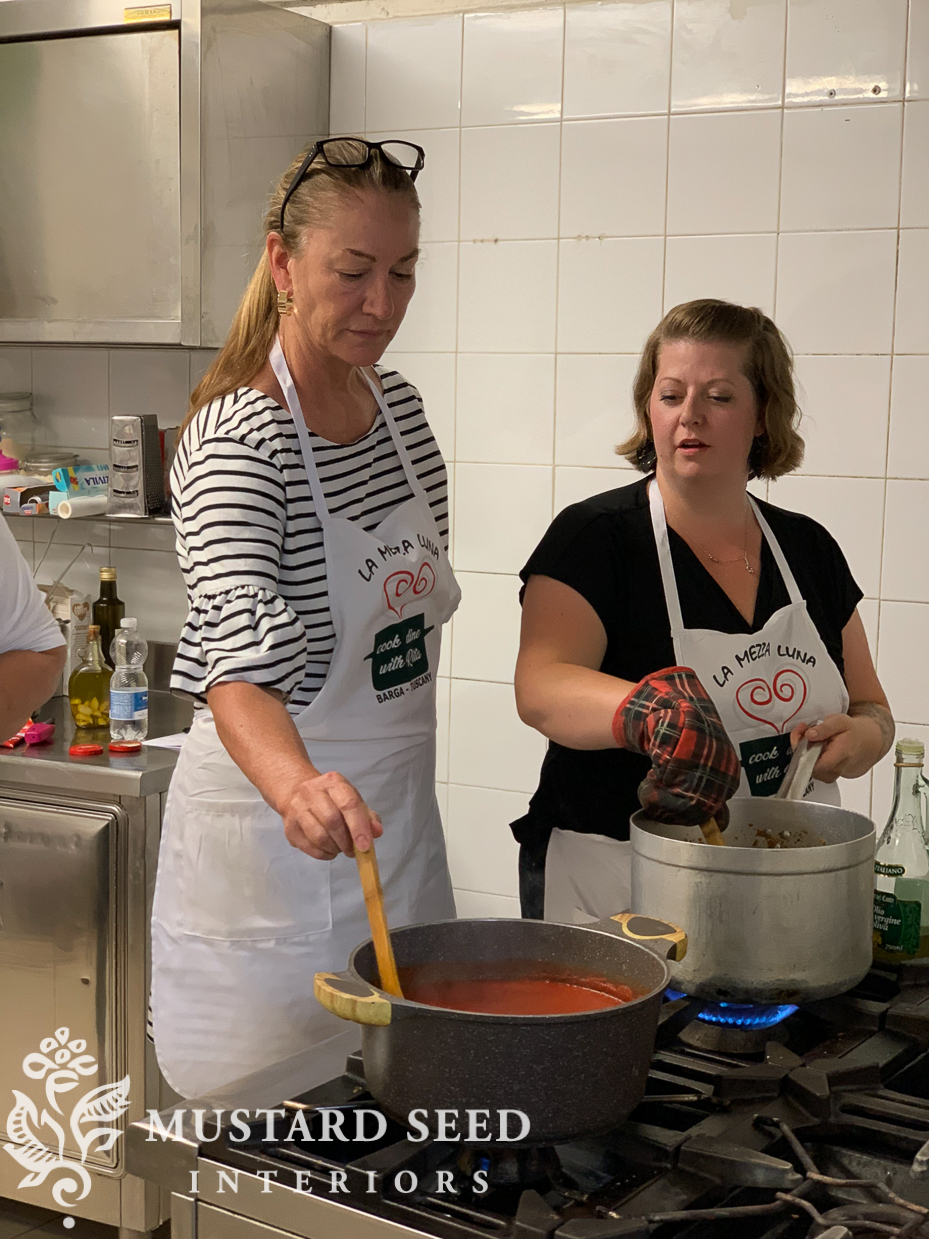 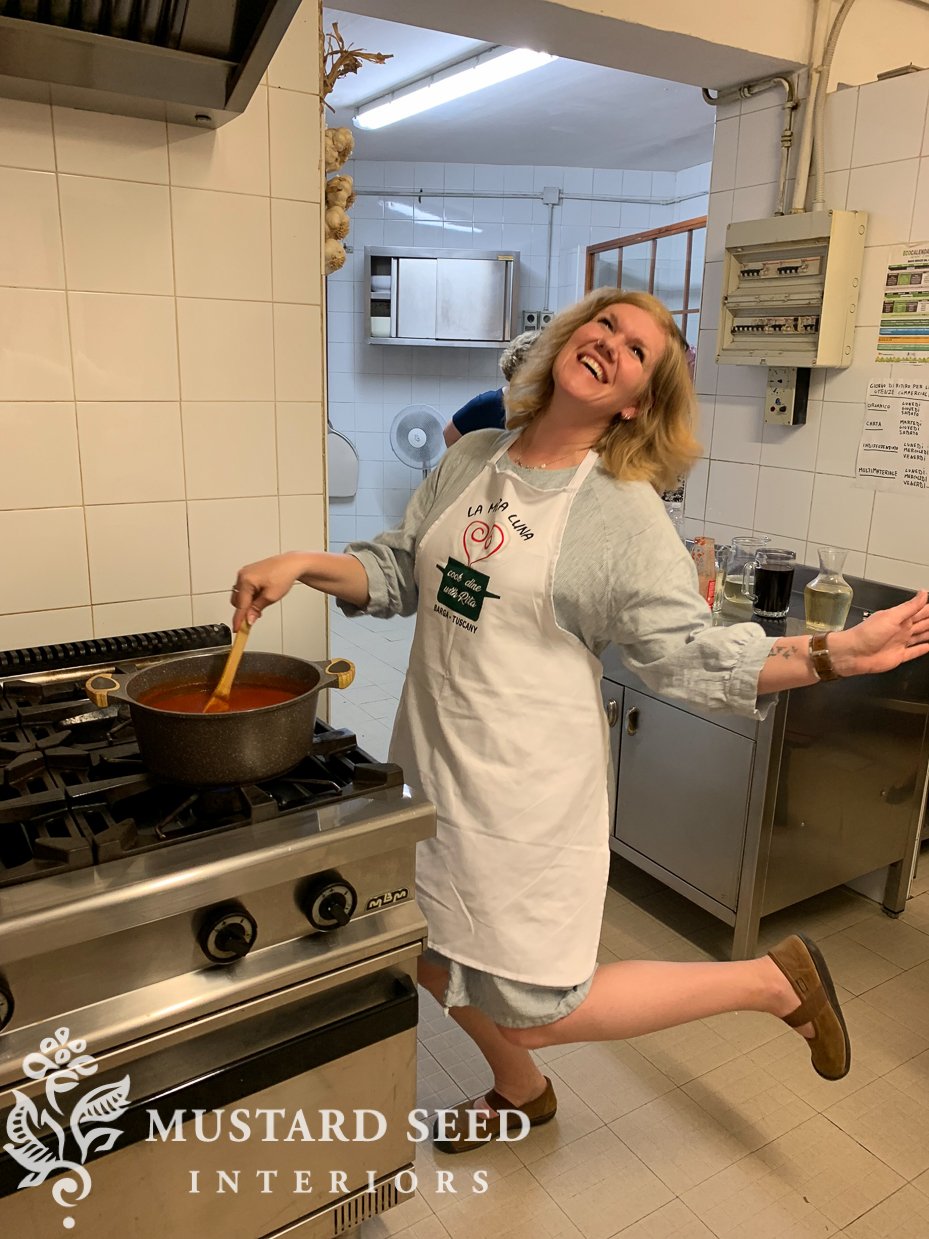 While she was cooking, I made notes on the recipe sheet she gave us, so I could repeat the recipes when I got home. But I also took notes on all of her funny quotes, comments, and expressions.

A tablespoon was a “scoosh.”

When talking about red meat, butter, and cream, she said, “When you eat Italian, use the best ingredients and just eat a salad the next day.”

She added, “One glass of wine to the pot and the rest to the chef.”

When she added “an Italian pinch” of something, that meant she added a lot. In this case, she added an Italian pinch of nutmeg to the ravioli filling.  She loved her nutmeg!  We were all a bit horrified at the amount she was adding, but it ended up tasting great.

Rita also wanted to make sure that everyone had enough wine. She told our group to yell, “ALEX, VINO!” if a refill was in order.  He eventually brought out carafes with wine, probably to reduce the amount of yelling. 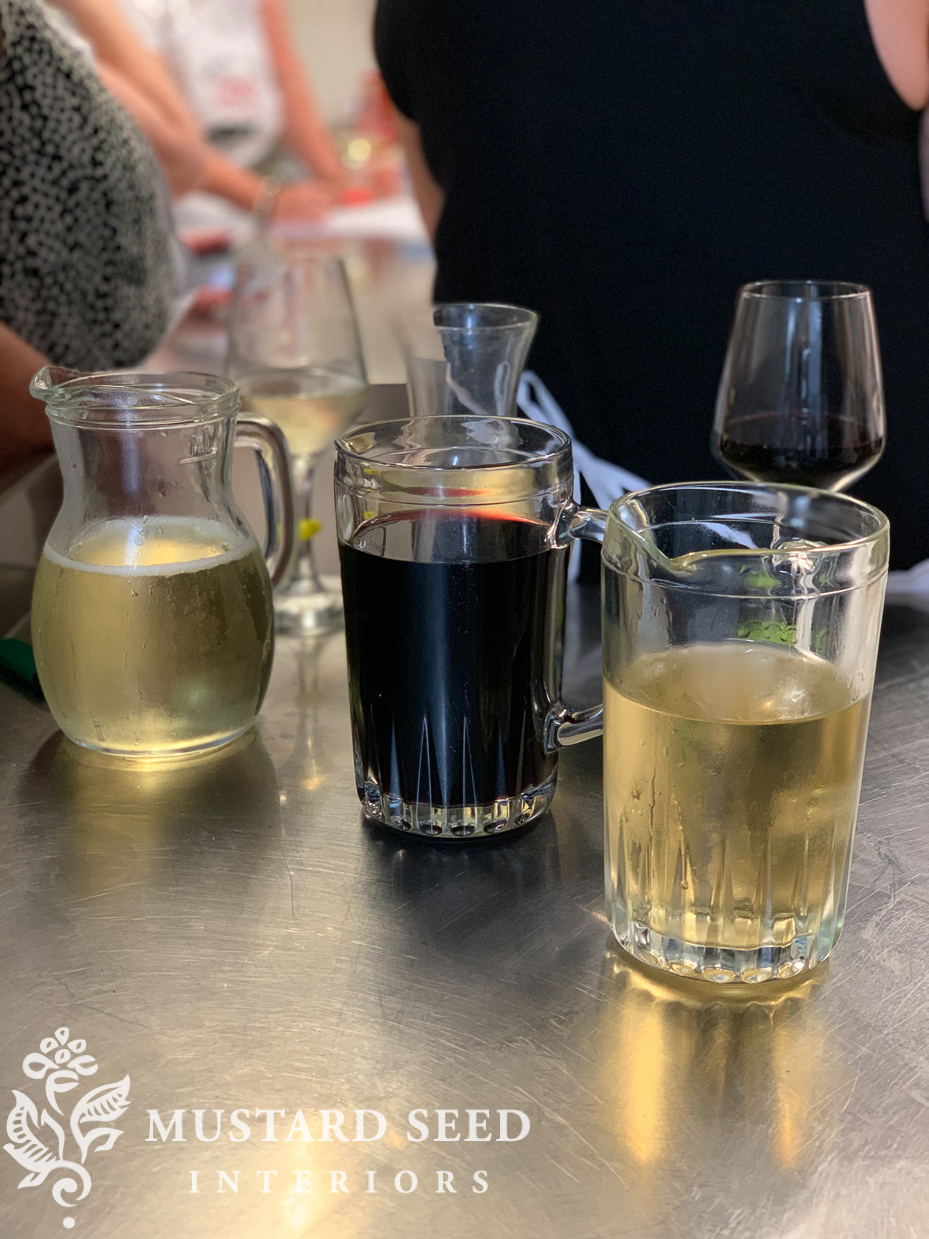 Once the sauces were made and bubbling on the stove, we went into a larger room to make tiramisu, gnocchi, and fresh pasta.  I volunteered to assemble one of the dishes of tiramisu.  I actually don’t care for tiramisu, but it is Jeff’s favorite and I wanted to learn to make it for him.  It was surprisingly simple to make and would’ve been even easier with an electric mixer for the eggs. 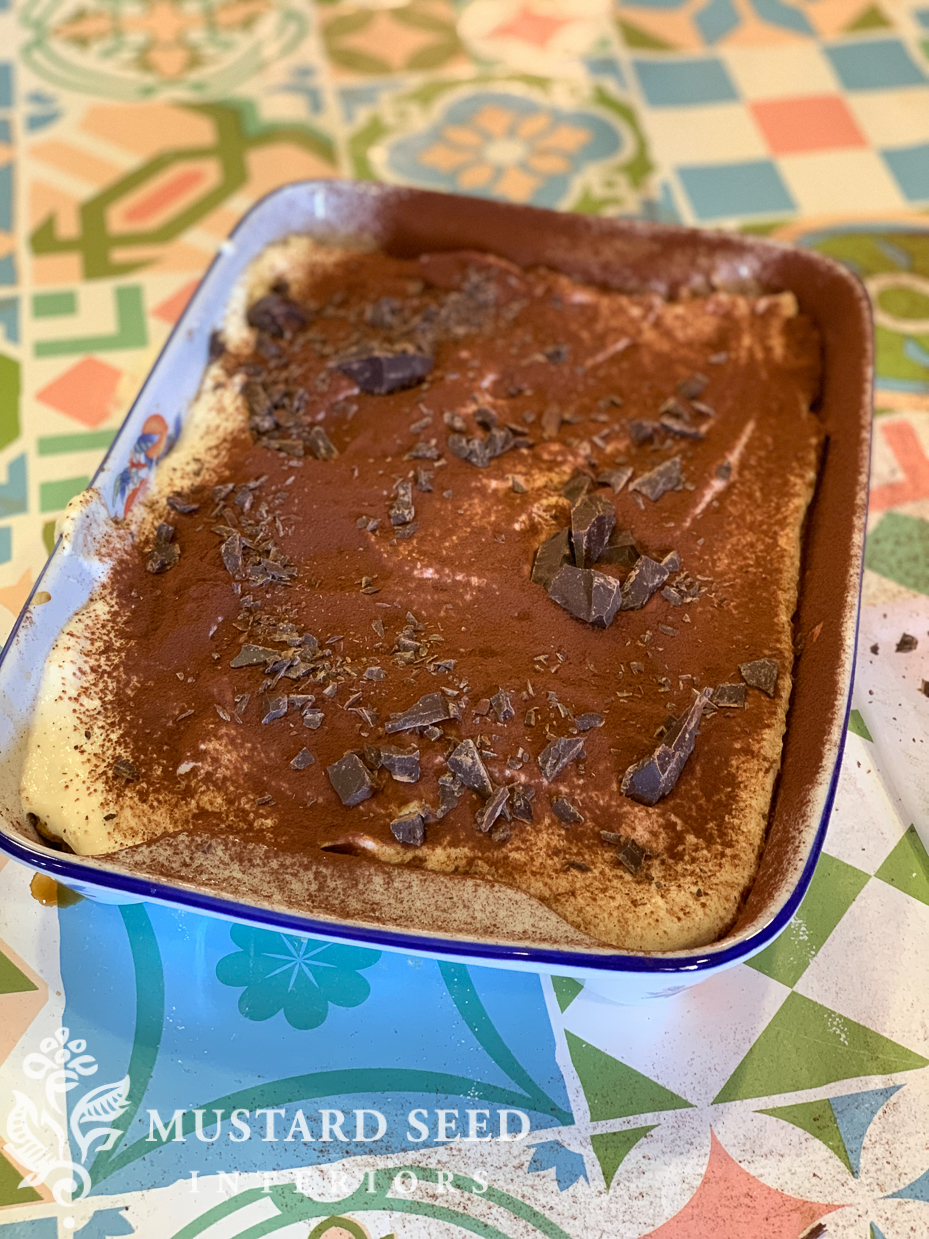 While tiramisu it’s still not my favorite dessert, I must admit that this one was really good.  Once the tiramisu was assembled, it was put in the refrigerator to wait until the rest of the meal was ready. We then started on the gnocchi. 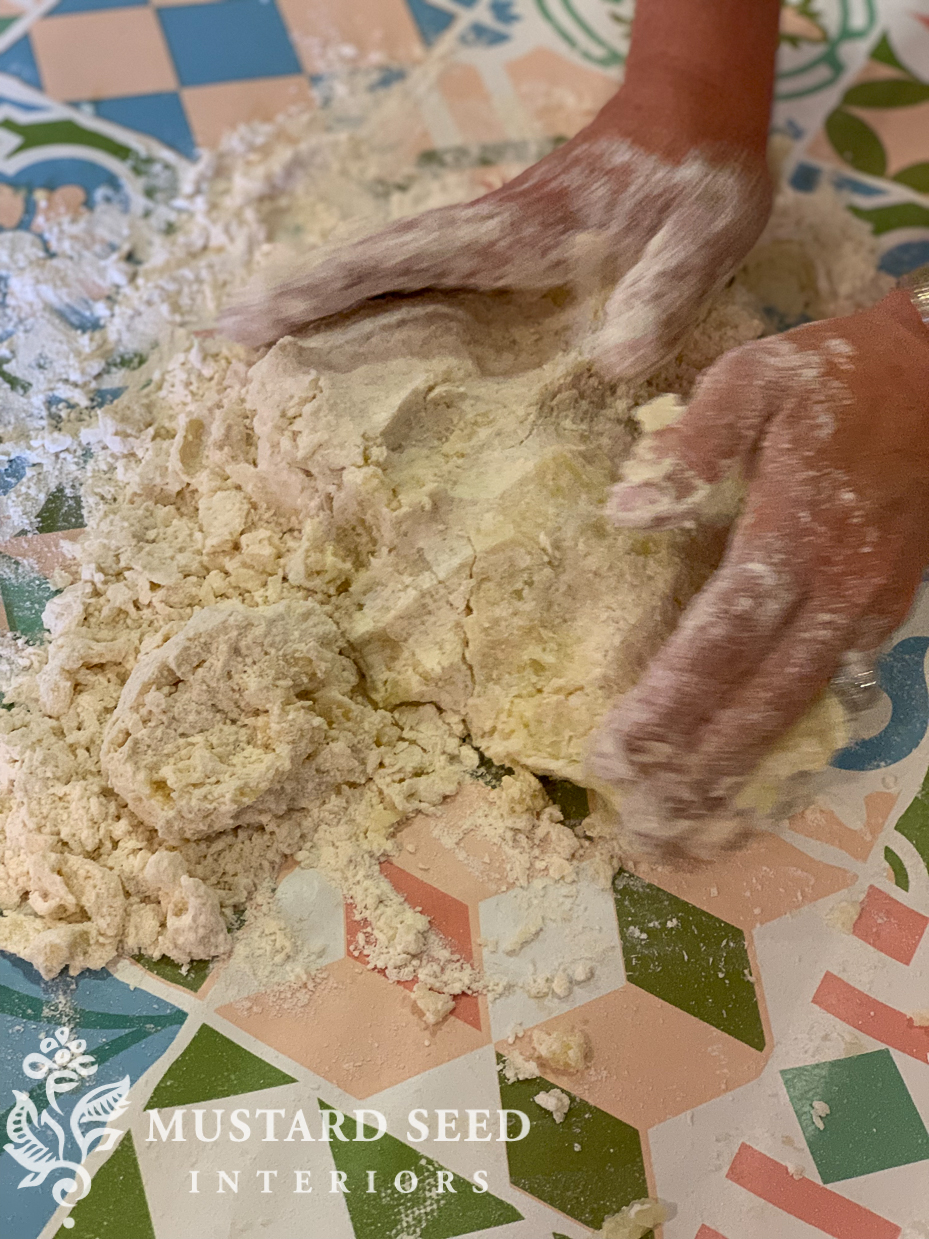 This is the part of the cooking class I was most interested in since I had never made gnocchi before. We each had a pile of potatoes and Rita walked around doling out the rest of the ingredients before we started to hand mix our dough.  I’m sure making perfectly fluffy gnocchi is difficult, but just making gnocchi is not.  We all gently needed and mix our piles of ingredients into a soft, somewhat wet dough.  We then rolled, cut, and shaped our gnocchi, placing them on large wooden boards dusted with flour. 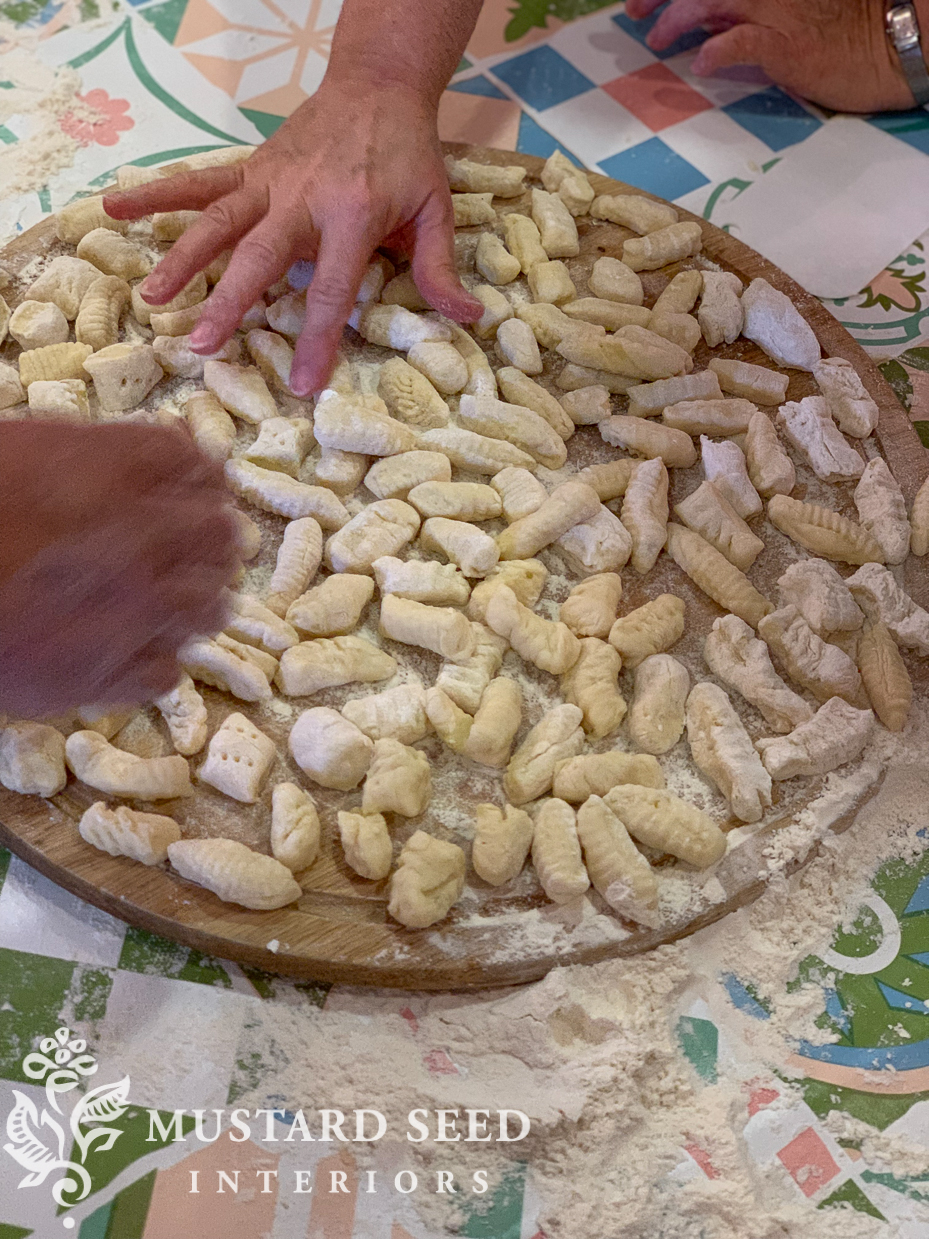 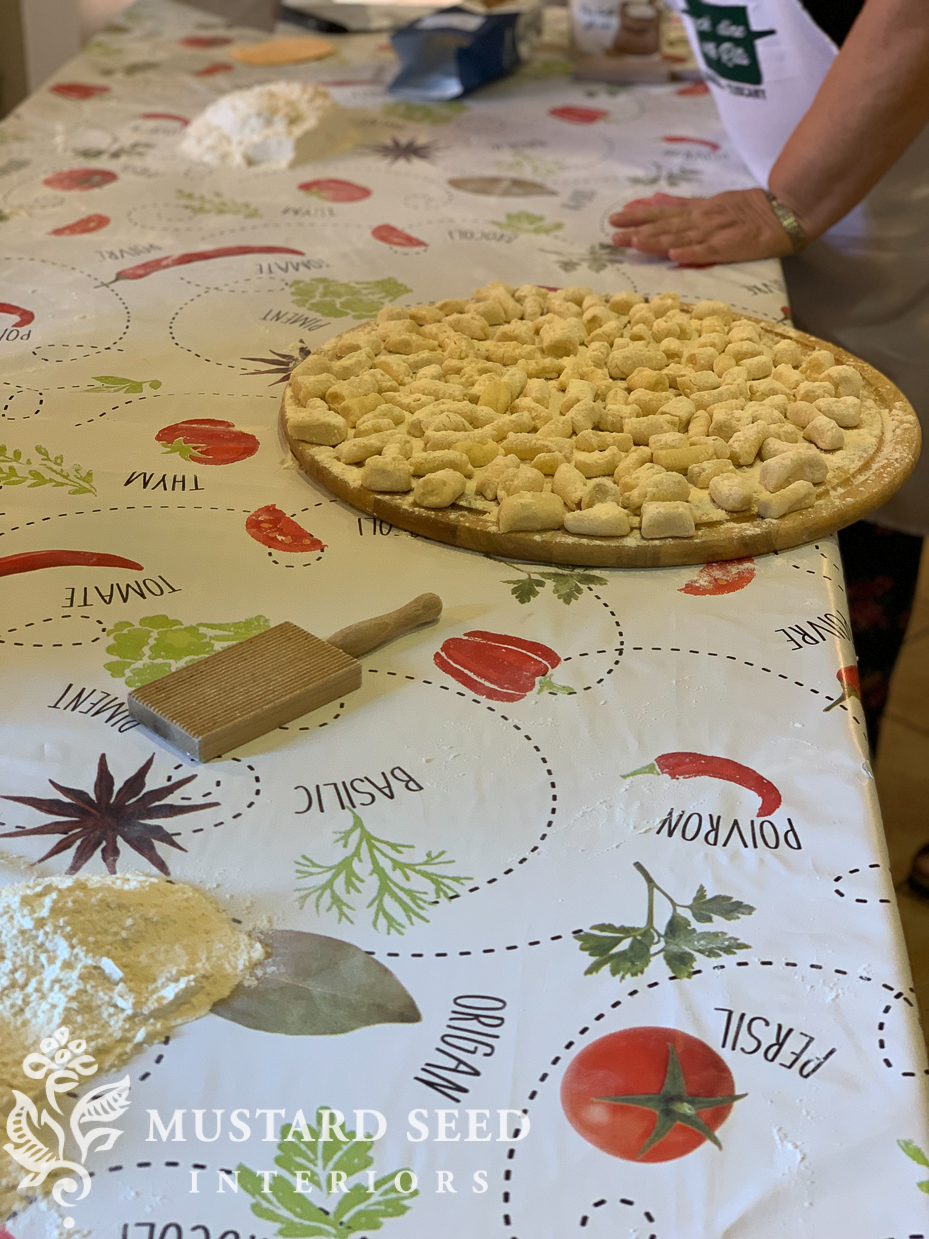 Once the gnocchi was completed, we made fresh pasta.  Again, we each had a pile of ingredients to mix into a dough. We’ve then worked together to roll out the pasta through hand-cranked machines to make three different shapes and cheese and spinach ravioli. We also made some colored pasta, dyed with tomato sauce for red and spinach for green.

During breaks in the cooking, Alex, Rita’s partner, would sing Frank Sinatra songs in Italian on a karaoke machine. He is a professional singer and has an amazing crooner voice, appropriate for Frank Sinatra songs.  It was another layer that made the experience great.

At one point, my mom and a few other ladies in our group, coaxed me to sing with Alex. We sang a duet of New York, New York and I realized about a quarter of the way through that I didn’t know the song as well as I thought I did!  It was okay because all of our group came into the room and sang along. I remember feeling a little embarrassed, wishing I had picked a song that was in a better key and that I felt more comfortable singing, but that moment wasn’t about showcasing my dusty talents.  I mean, how many times will you get to sing with a professional Italian singer in Tuscany?  Sometimes you just need to go for it. 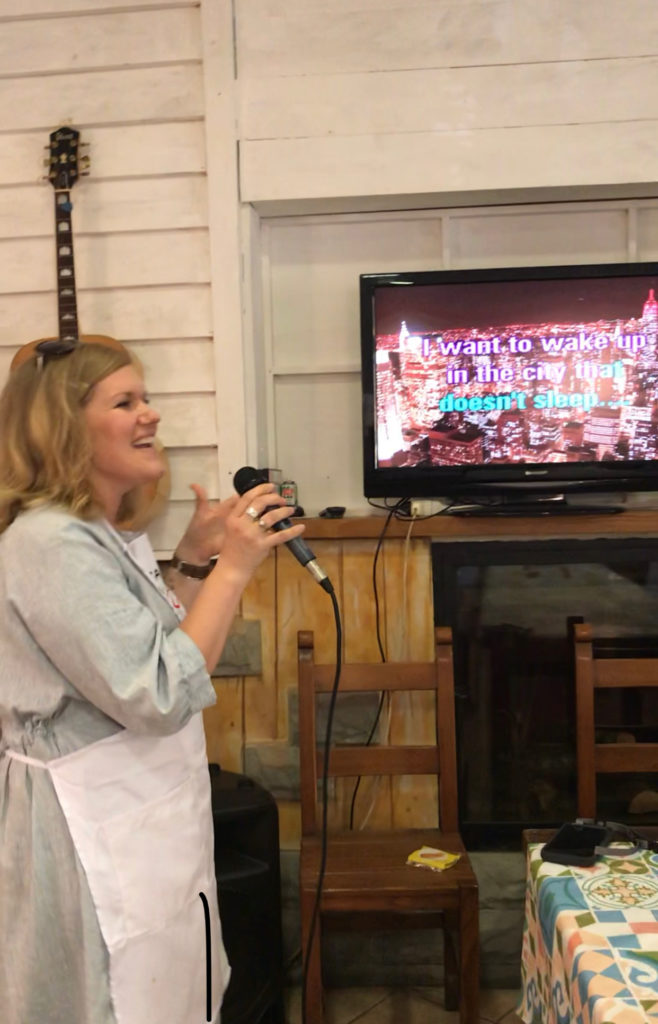 By the end of the pasta rolling and shaping, our group had gotten smaller.  It was a lot of cooking!  It was sort of like the end of a day of making and decorating Christmas cookies.  You had a great time, but by the last batch, you didn’t care if they had any icing on them!  We ended up getting all of the pasta rolled and shaped and all of the ravioli filled.  The group then headed back into the kitchen with Rita to sauce the pasta and gnocchi. 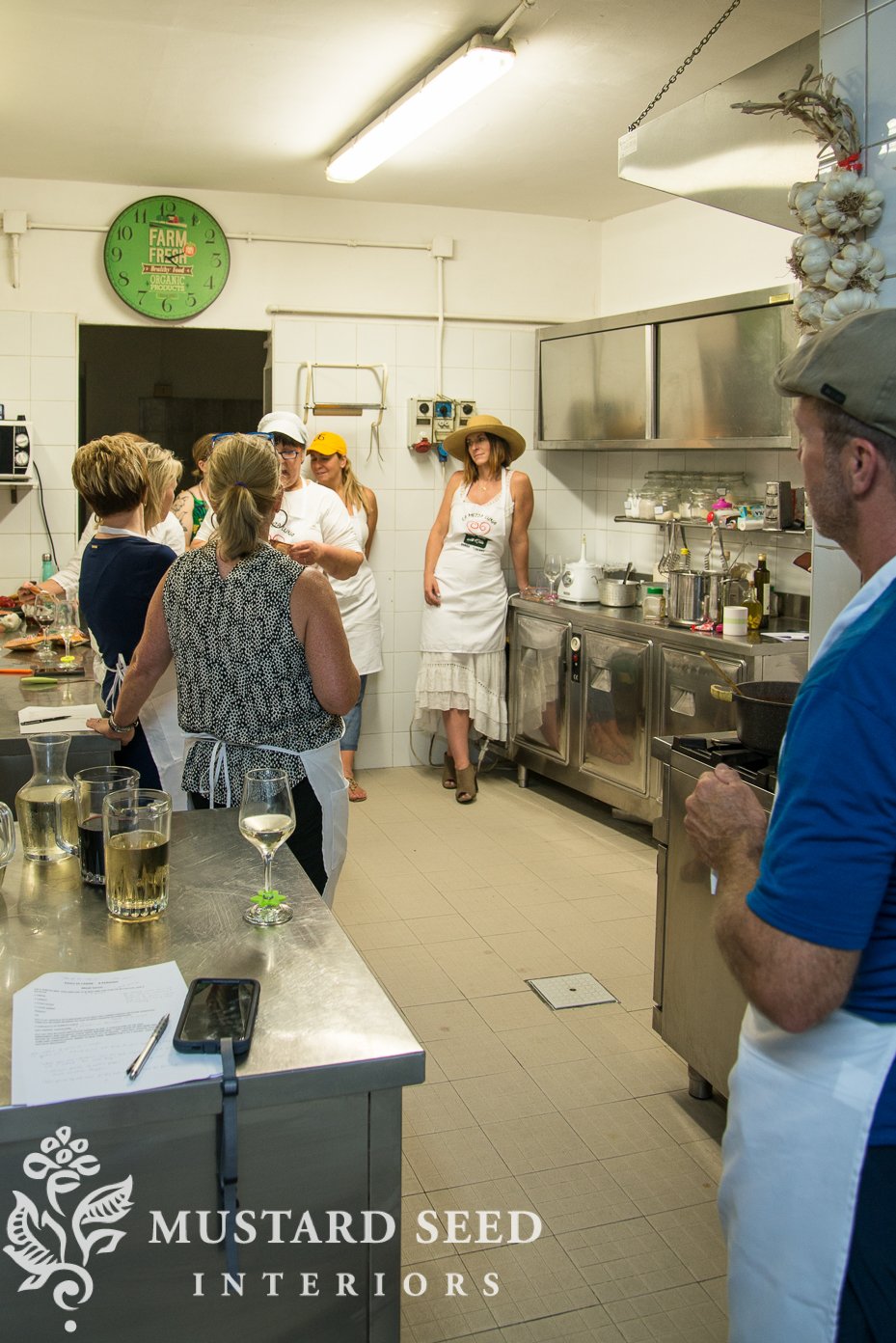 By the time we were finished preparing the meal, it was dark, and I didn’t take any pictures! We sat out on a covered patio, eating the food we just prepared on a breezy evening that had cooled off substantially since the afternoon.  I tasted each of the pastas, the gnocchi, and as I said, even the tiramisu.

My favorite was definitely the gnocchi, but the pasta was great, too.  I can’t wait to try some of these recipes once I have my arm back.  I will share the recipes when I make them.   I bought a gnocchi board from Rita, as a souvenir and to use when I make my own gnocchi.  (Dication thought I said new keyboard instead of gnocchi board!) 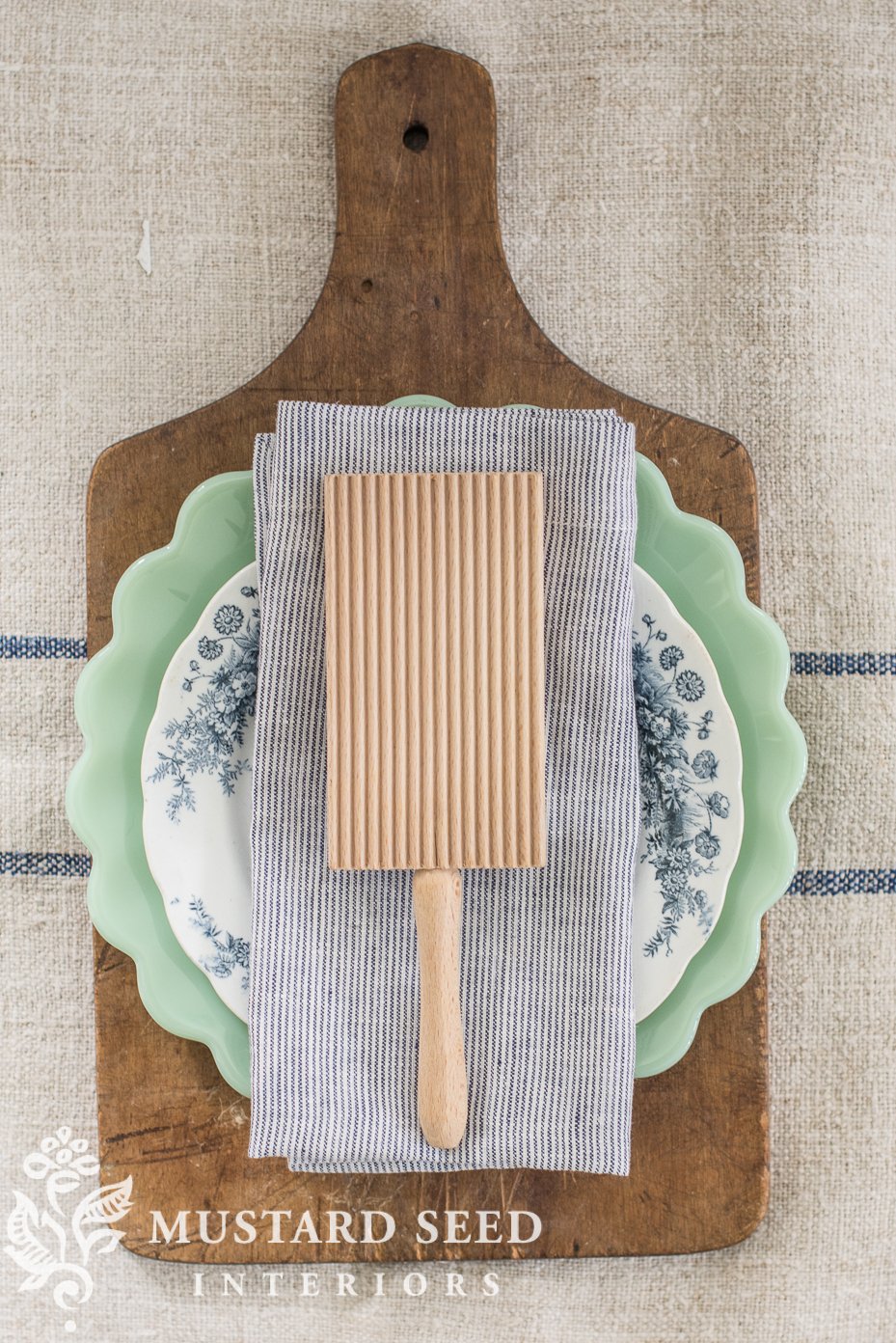 If you ever find yourself in Italy, near Barga, which is not far from Lucca and about two hours from Florence, I would highly recommend cooking with Rita.  It’s not a stuffy cooking class where you are behind your counter and the teacher is behind theirs.  It’s more like an extended family member putting you to work in their own kitchen and teaching you their tricks along the way.

I took a little time that night, when we got back from the cooking class, to write in my journal.  I didn’t want to forget the experience.  I didn’t stay up long, though, because the next day we were headed to a thrift store and the flea market to do some antiquing…