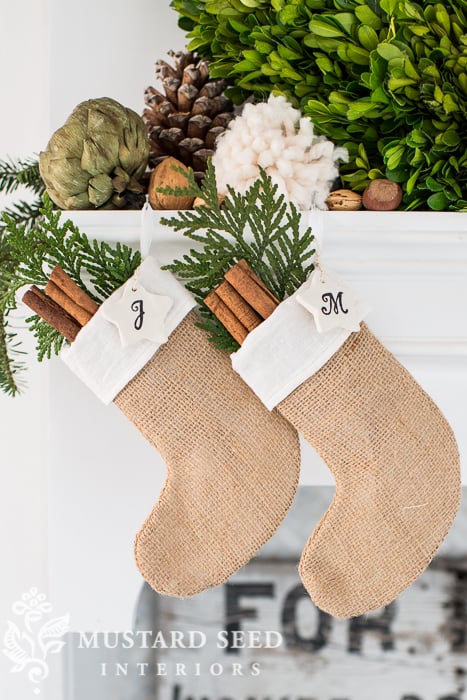 I got out of bed this morning and was ready to do some more Christmas decorating.  I had toyed with the idea of going to the studio and doing some work there, but the kitchen was calling my name.  It needed a bit of cleaning and I really wanted to give it some festive touches.  In typical “Marian-fashion”, I got so into what I was doing and didn’t want to stop, so breakfast didn’t happen until 11:00 and a shower didn’t happen until 2:15.  I throughly enjoyed the process, though, and the result. 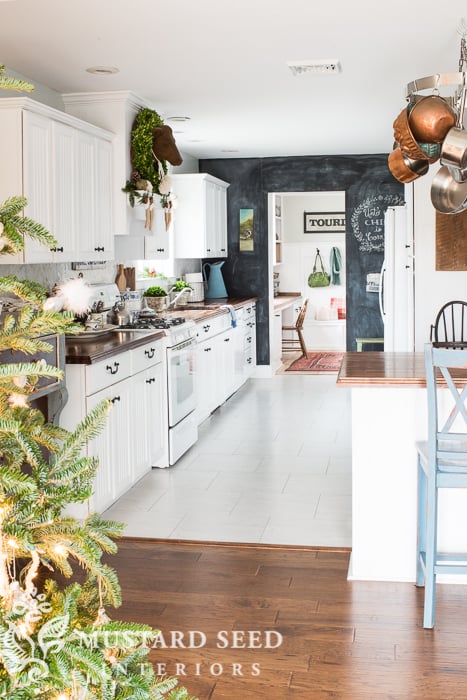 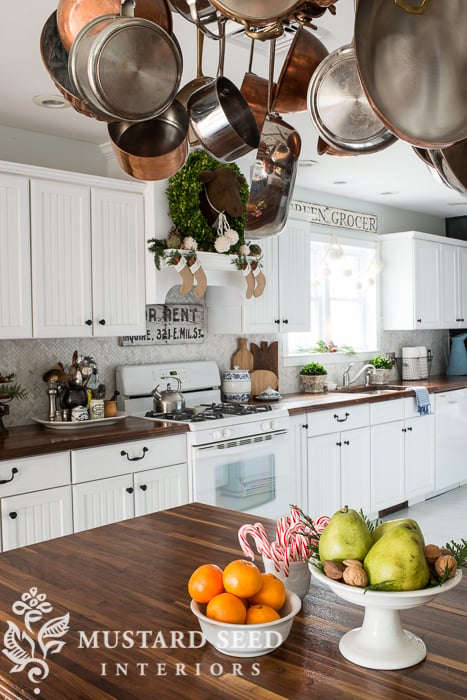 The range hood is my favorite part.  The boxwood wreath is around the cow head (Julia) year round, but I tied some homemade wool poms around her neck for a little something extra.  I nestled some greenery, pine cones, nuts, dried artichokes and more poms along the “mantle” and hung mini stockings filled with cinnamon sticks and fresh evergreen sprigs. 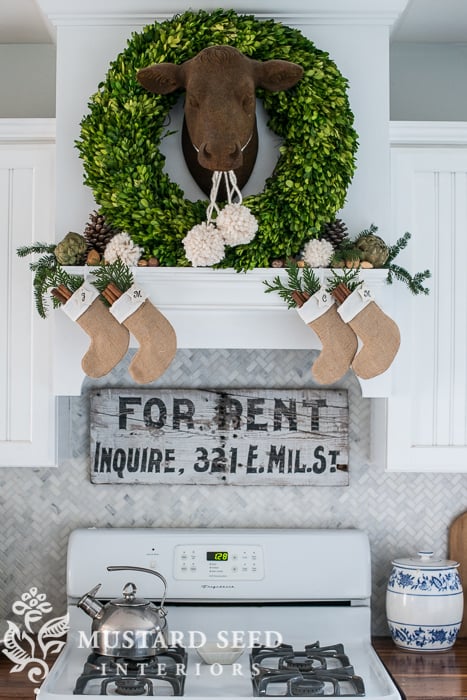 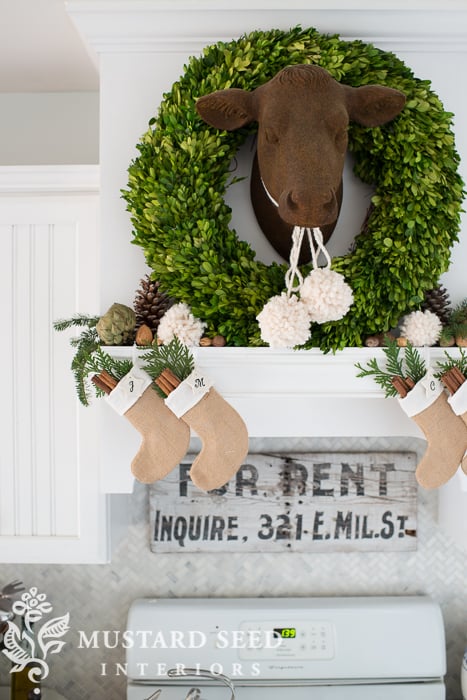 A sweet reader, Anna of A Good Home,  made these mini burlap stockings with clay monogram tags for each family member a couple of years ago.  They look so perfect there, so thank you for your generosity!  There are some of these mini-stockings as well as larger versions and other cute things in her Etsy Shop. 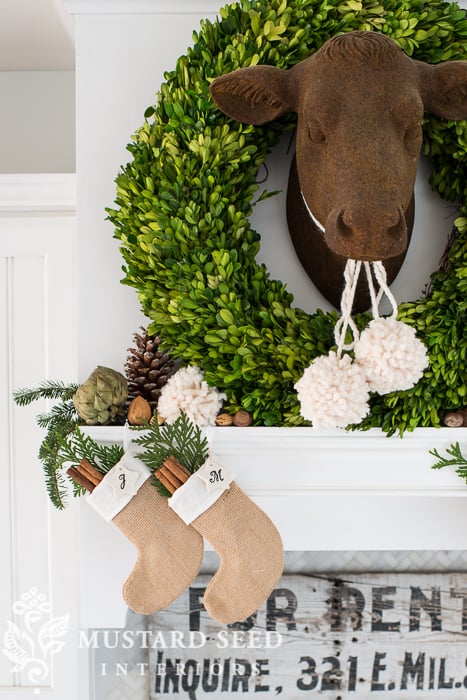 The cinnamon smells amazing, too, mingling with the fresh pine. 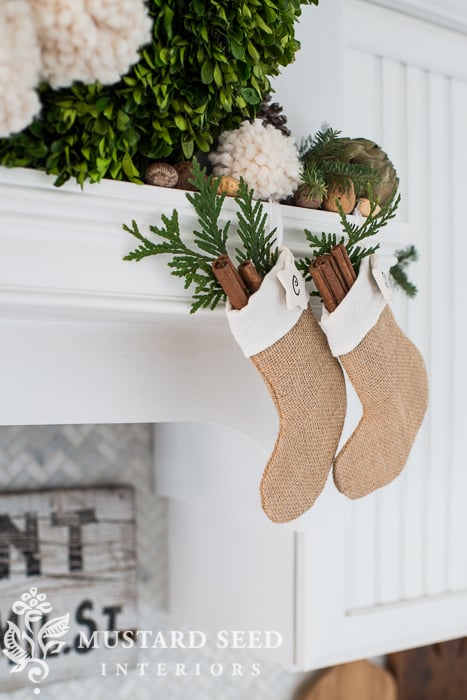 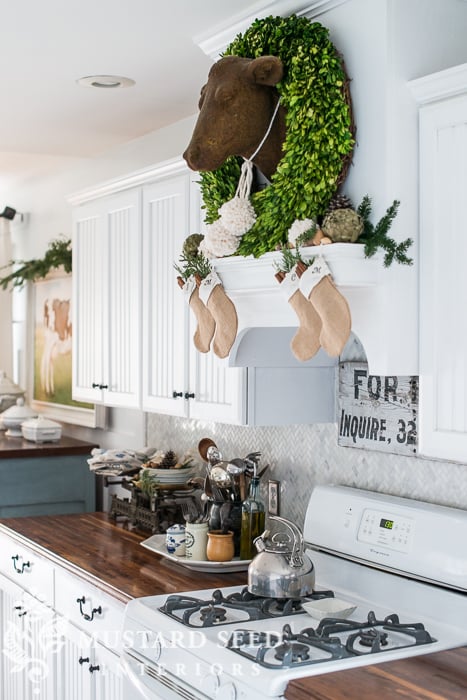 On the balance scale to the left of the stove, I added a couple of small presents, pine cones, greenery and nuts. 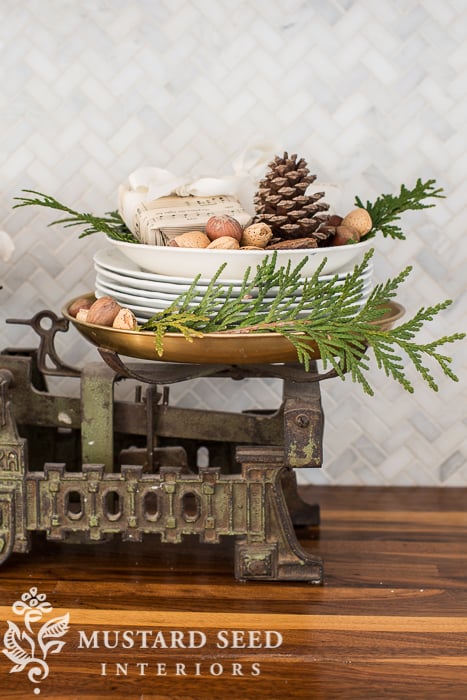 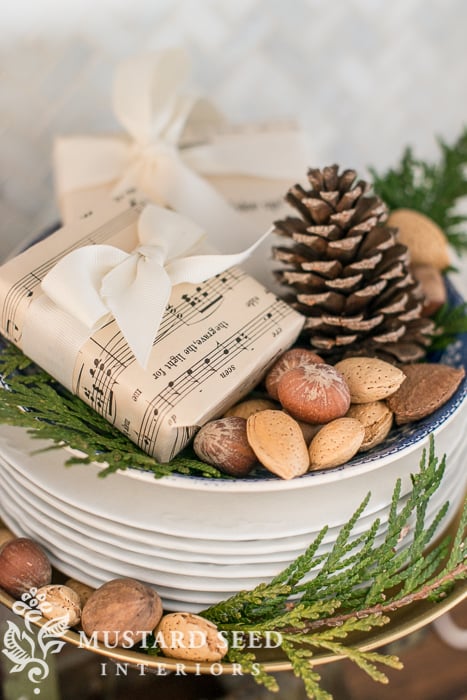 On the window to the right of the stove, I hung another wool pom-pom garland from Anthro.  I put some greenery on the sill and a dala horse I found in my Oma’s attic.  It was still in the original package with the price…3 Deutsche Marks. 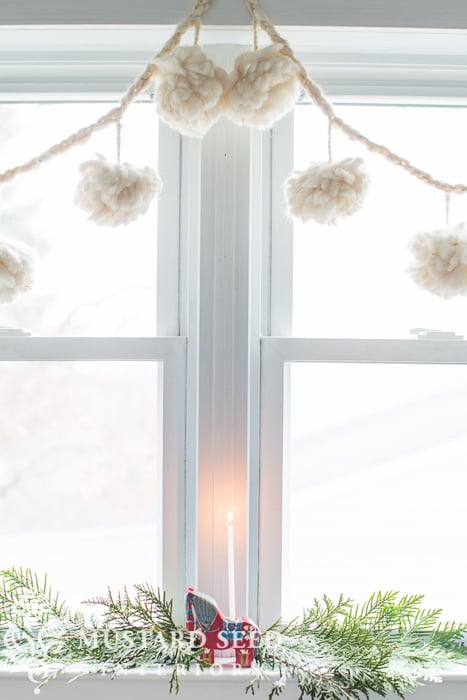 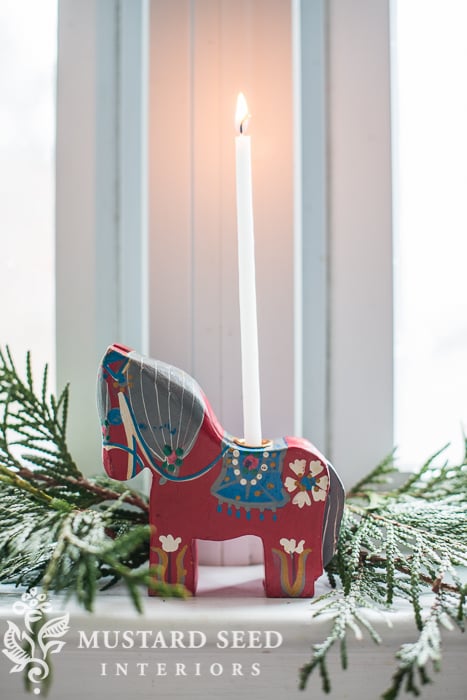 I found the skinny candles at Hobby Lobby, 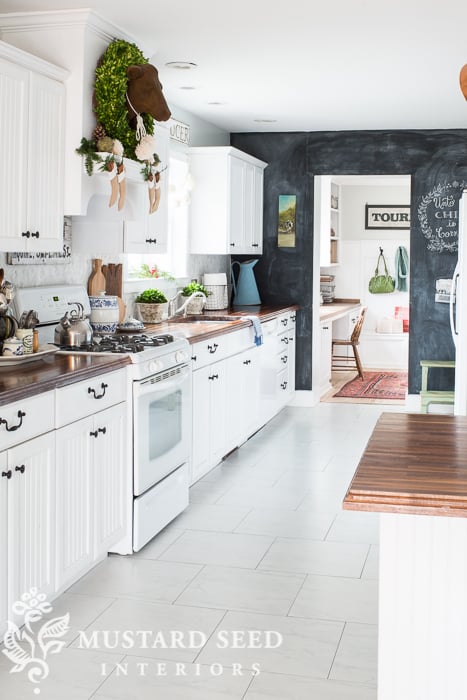 At the opposite end of the kitchen, I drew a little Christmas chalk art, reminding us the true reason we celebrate December 25. 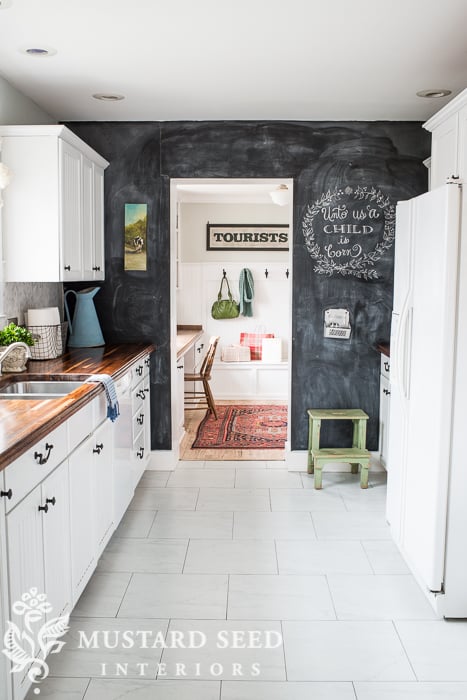 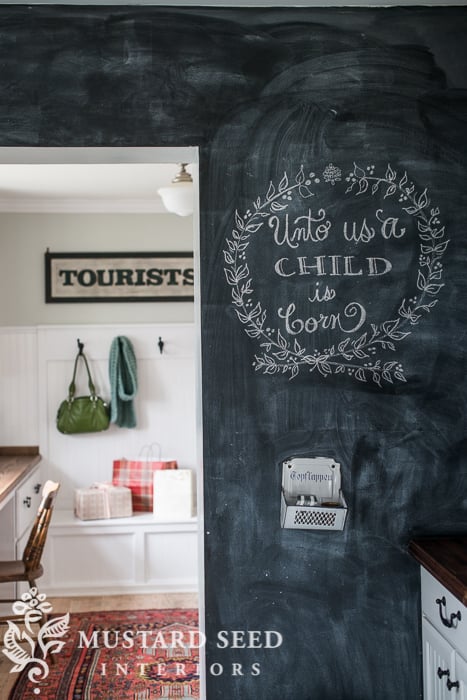 I had to laugh, because it looks a little like “Unto us a child is corn”, but I figured most people would know it says “born”.  Now everyone just sees “corn”, I’m sure. 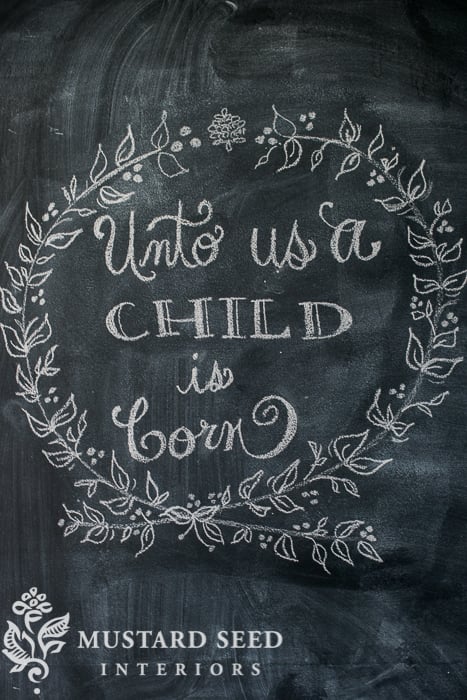 I tidied up the home office a bit for the photo shoot.  It serves as our “landing zone”, so it’s usually piled with coats and backpacks.  It’s a little thing, but I love the plaid bag from Pottery Barn.  I bought something there when Jeff and I were on our getaway and the salesman asked if I wanted a bag or not.  “Getting a nice bag is one of the fun parts of shopping in a store like Pottery Barn, which I don’t frequent very often.  Yes.  I want a bag.” 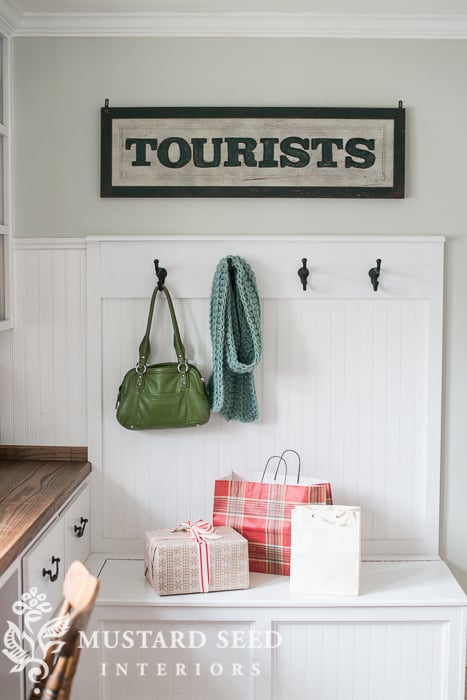 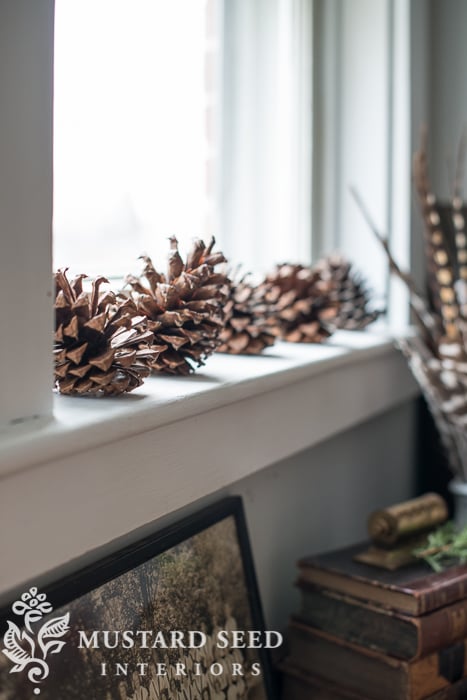 …and turning the vintage perpetual calendar to the anticipated day with a sprig of greenery in front. 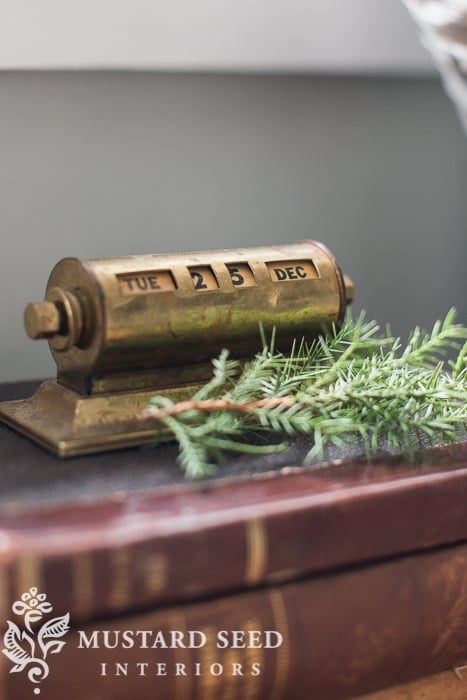 Back in the kitchen, the “baking center” sports a fresh evergreen swag and some more pine cones.  For a magazine shoot, I would remove the microwave, but there it is.  We have a microwave and that’s where it lives. 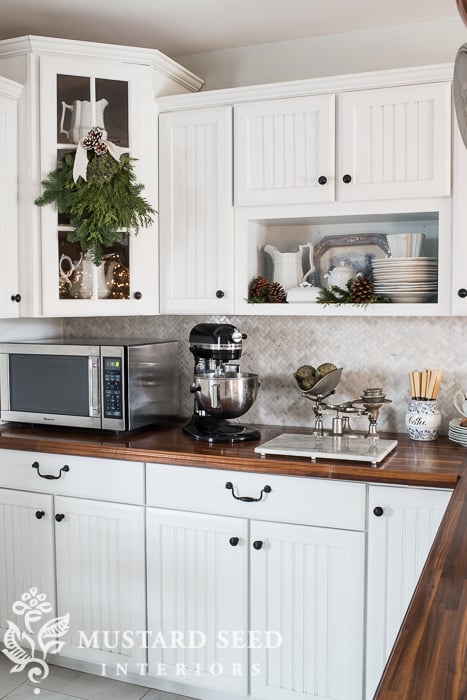 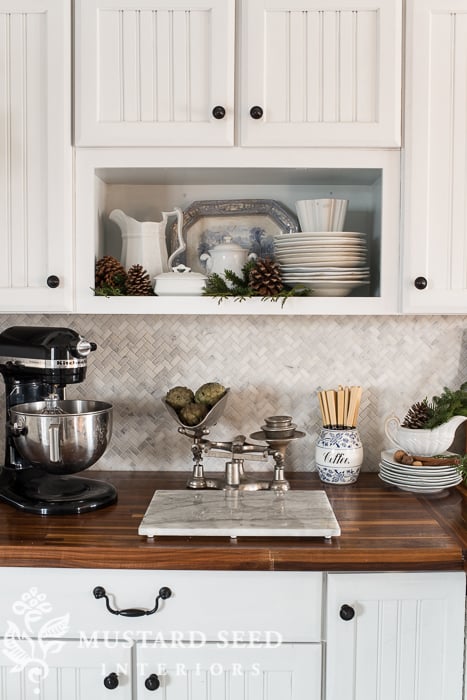 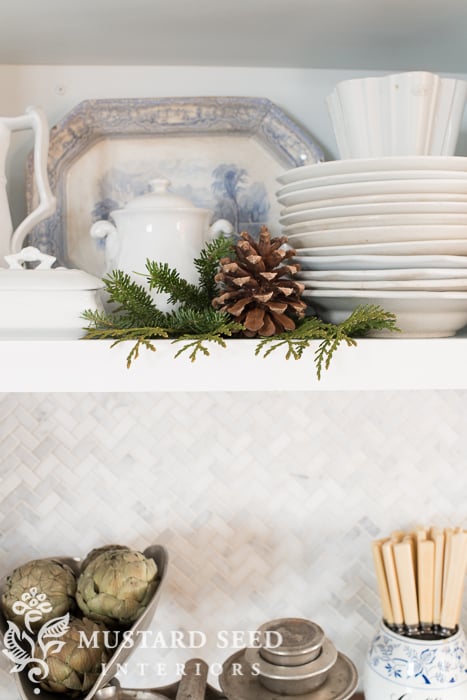 While I was making a mess clipping all of the greenery, I decided to add some to Gwendolyn’s frame… 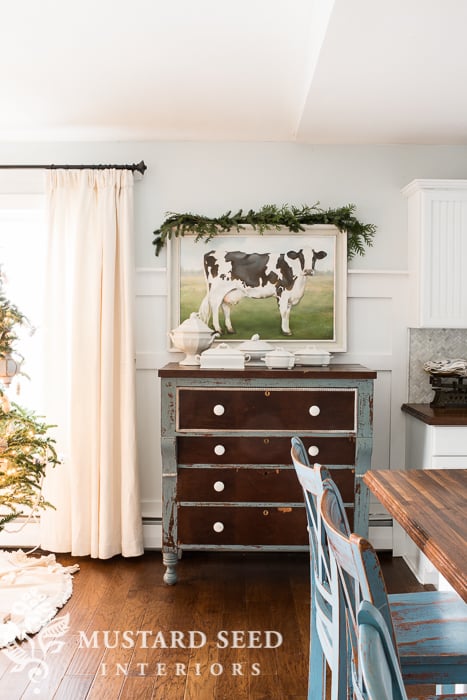 …as well as the top of the hutch in the family room.  I am out of store-bought garland, so I used trimmings from the Christmas tree and our yard.  (I think one of the boxwood wreaths is slipping a little lower than it’s twin!  They are just affixed with duck tape, so that sometimes happens when I open it to get a pitcher.) 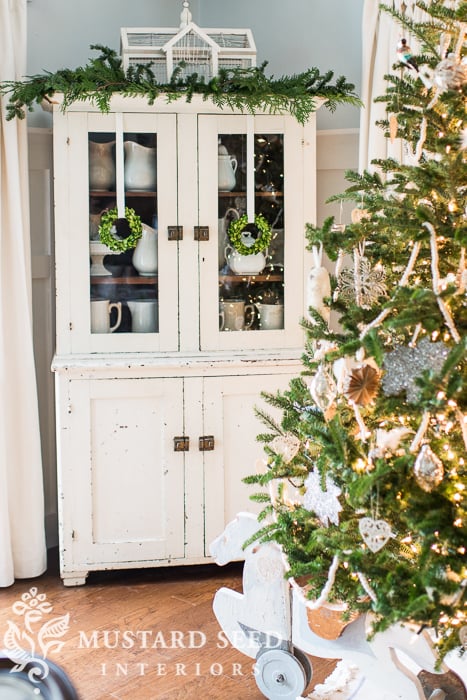 As I was out trimming greenery off one of our trees (in my jammies), a flurry of snow started to fall.  It was confirmation that it was the perfect day to stay home and decorate.

31 Comments on “Christmas decorating | the kitchen”