I took some time a couple of weeks ago to put some finishing touches on Calvin’s room and, while I did that, I added a few Christmas decorations. 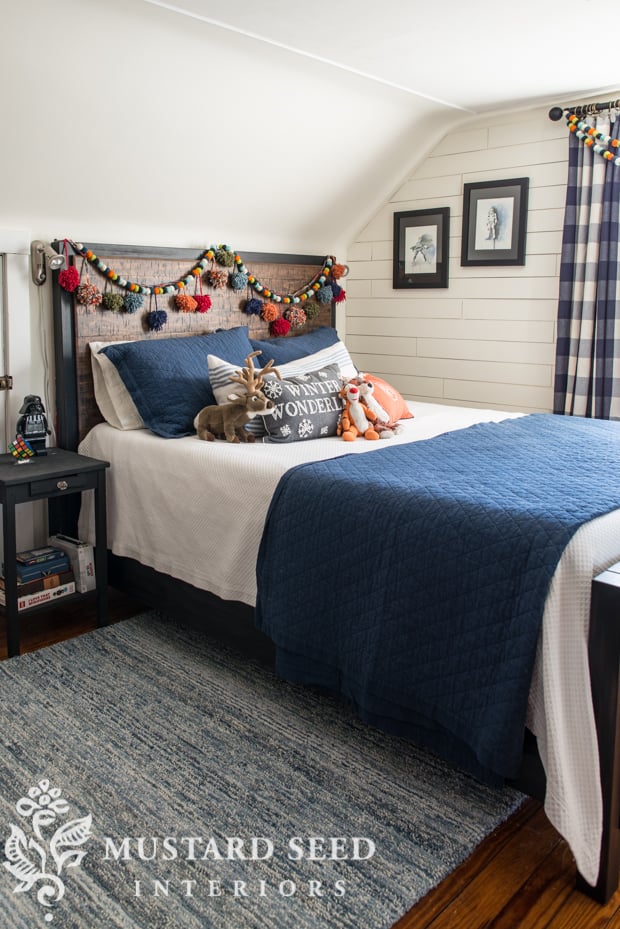 I finally swapped out the brass curtain rod with this matte black single curtain rod from Birch Lane.  This one is pretty heavy duty just in case someone thinks it’s a good idea to hang on the drapes.  My boys generally don’t do that sort of thing, but it’s always in the realm of possibility. 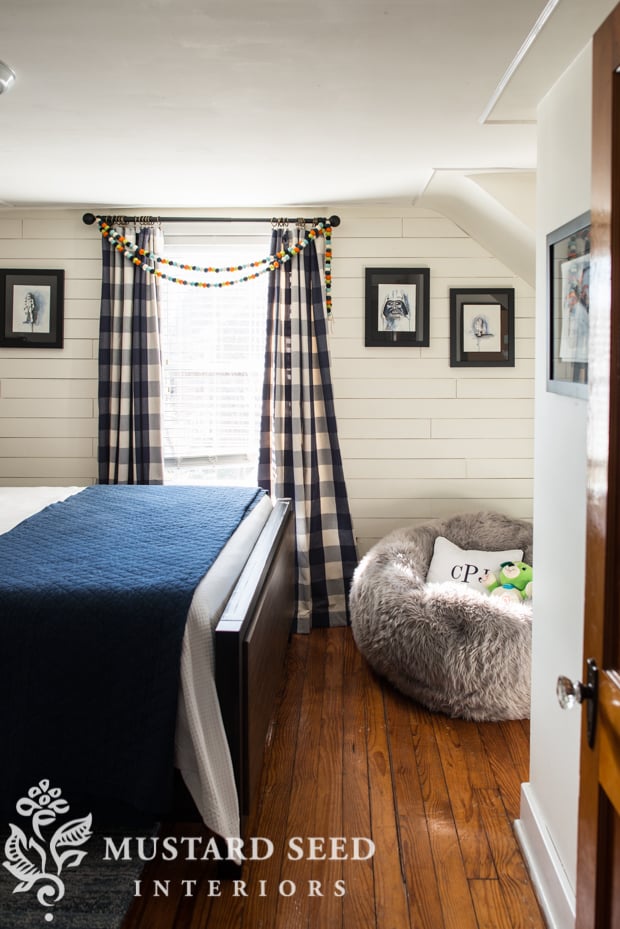 I didn’t swap out the rings out of laziness, to be quite honest, but I actually don’t hate the brass rings with the black rod as much as I thought I would.  Even though there is something unexpected and interesting about it to me, I will swap them out for black ones at some point.

I hung some wool pom-poms from the curtain rod and headboard for a playful, Christmas touch. 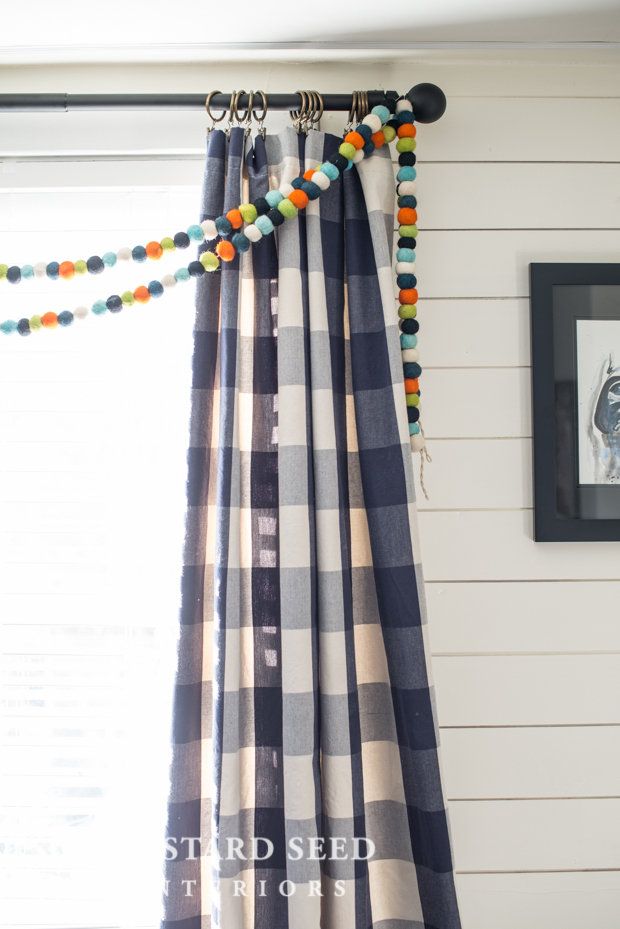 I also got this Birch Lane kid’s classic monogrammed pillow for his bean bag chair.  Does that just look like the best place to curl up? 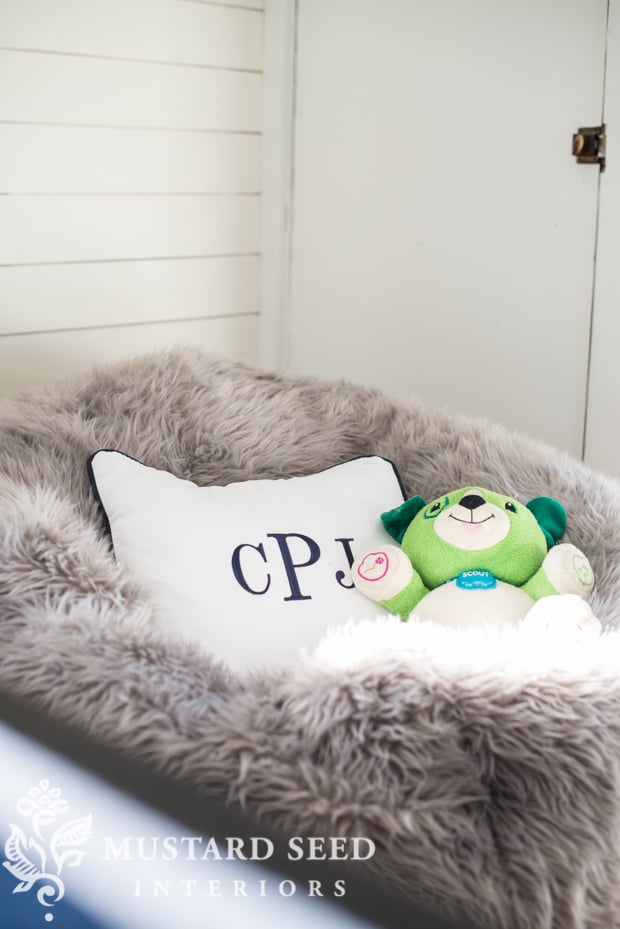 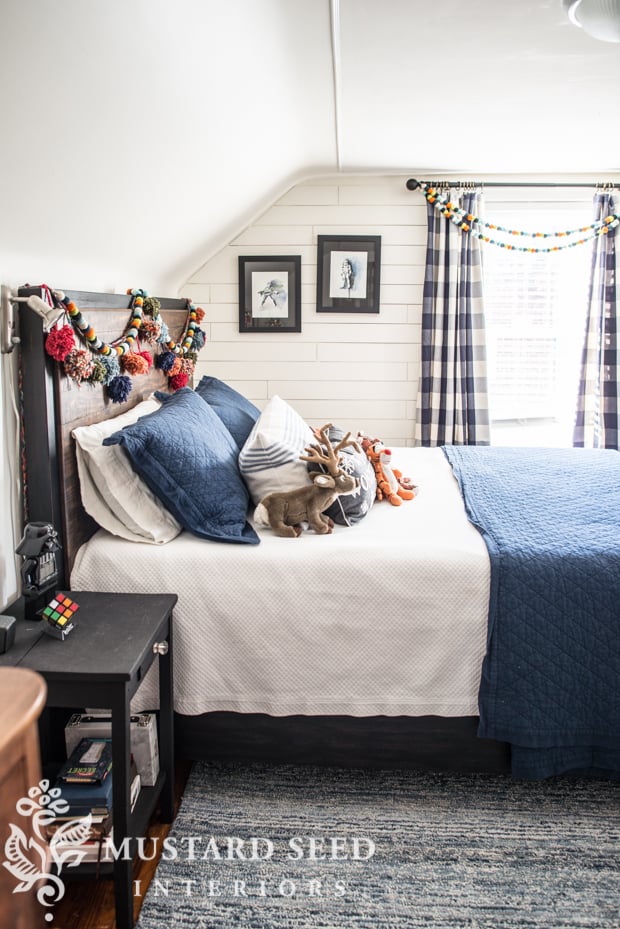 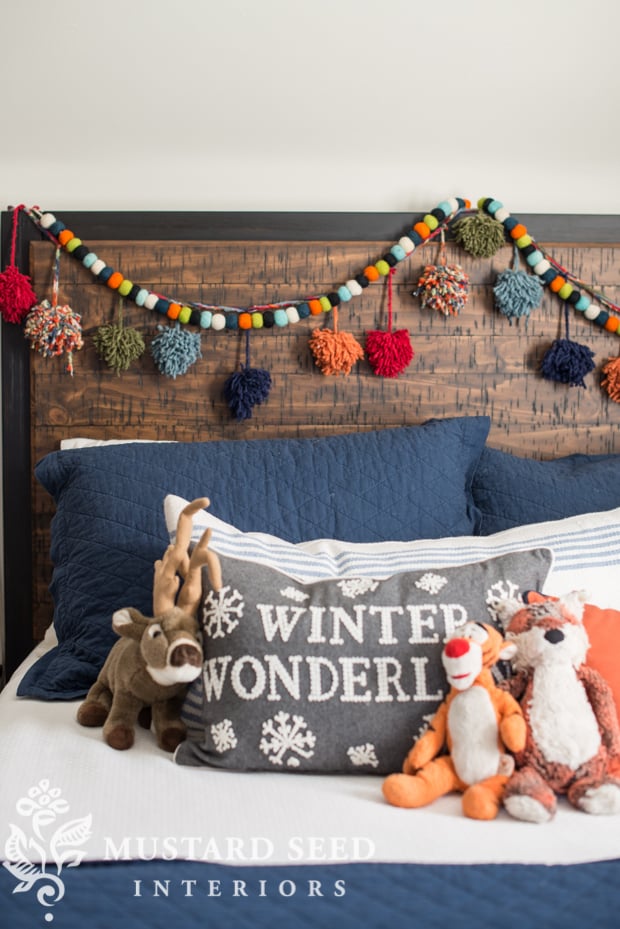 This room doesn’t have a lot of functional storage, so I wanted to make the most out of the little “desk nook” in the dormer. 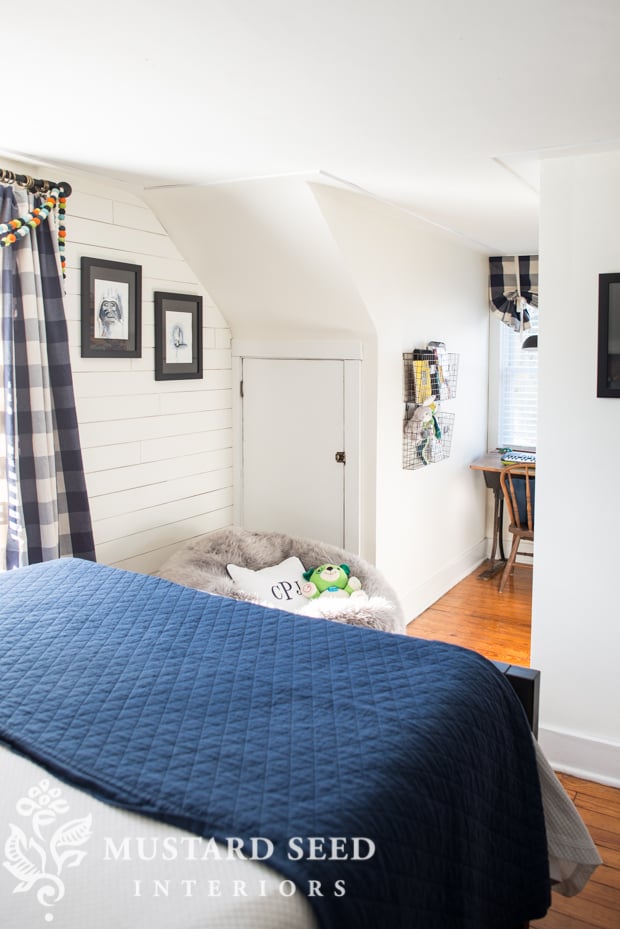 I found the old school desk at an antique store.  It was the perfect size and it has a lift-up top, so Calvin can keep some art supplies, paper, etc. inside.  Since the desk doesn’t provide a ton of storage, I added some vertical storage with the wire wall basket organizer on the left wall.   It provides some additional storage for books, pads of paper, notebooks, etc. 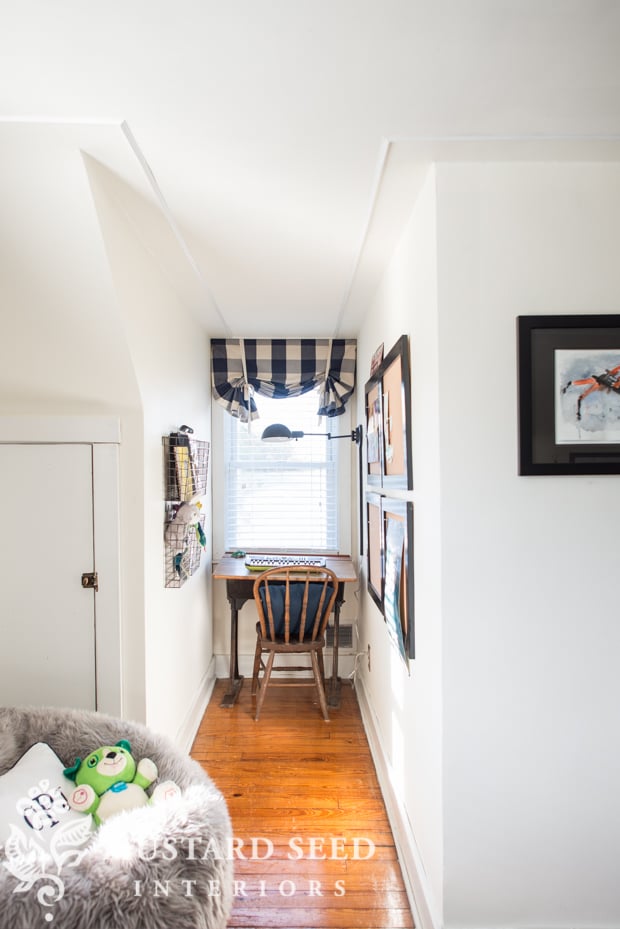 I had a small bulletin board in the nook, but he filled it up in no time and requested more real estate.  I got him four smaller bulletin boards, so we can play around with the configuration and also so he can have sections for different artwork, pictures, and mementos.  (Actually, I was looking at his boards a few days after I took these pictures, and I noticed he added a colored Christmas tree and presents and had pinned them up together.  It was so sweet!) 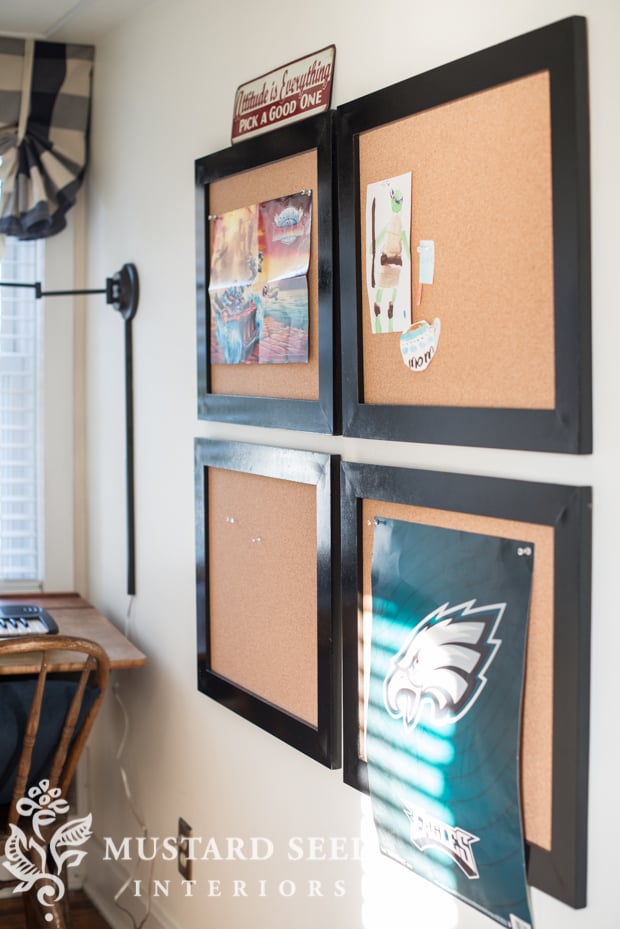 I also added a light over the desk.  Again, since space is an issue, I added a swing arm wall sconce in oil rubbed bronze.  When they don’t have to get up early for school, we let the boys stay awake in their rooms and read, draw, or play quietly.  This little nook has been great for that. 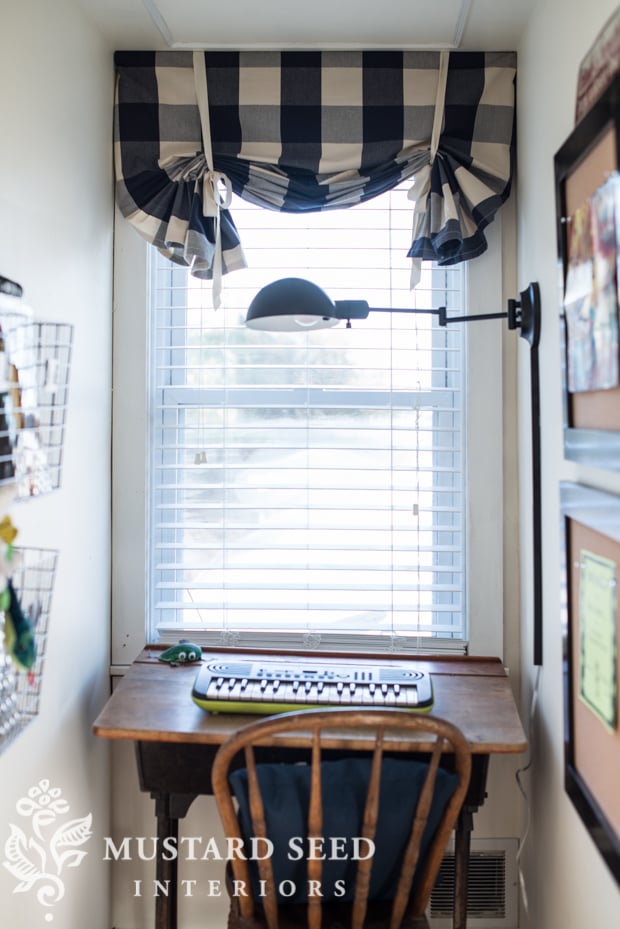 (I still need to get a cord cover for that cord!)

I’m planning to swap out the 1800’s dresser for one that is more fitting for a young boy, but I haven’t found just the right one, yet.  On the current dresser, though, I thought it would be fun to go “old school” with my ceramic Christmas tree.  My aunt made it years ago and it was left in my Opa’s attic.  My mom made one that was identical, so we always had it out at Christmas and, when no one else wanted this one, I quickly claimed it.  When I was a kid, I always secretly wished we could put it in my room and I know Calvin is enjoying it this year.  He insists on keeping it on as he falls asleep and I’ll sneak up to turn it off before I go to bed. 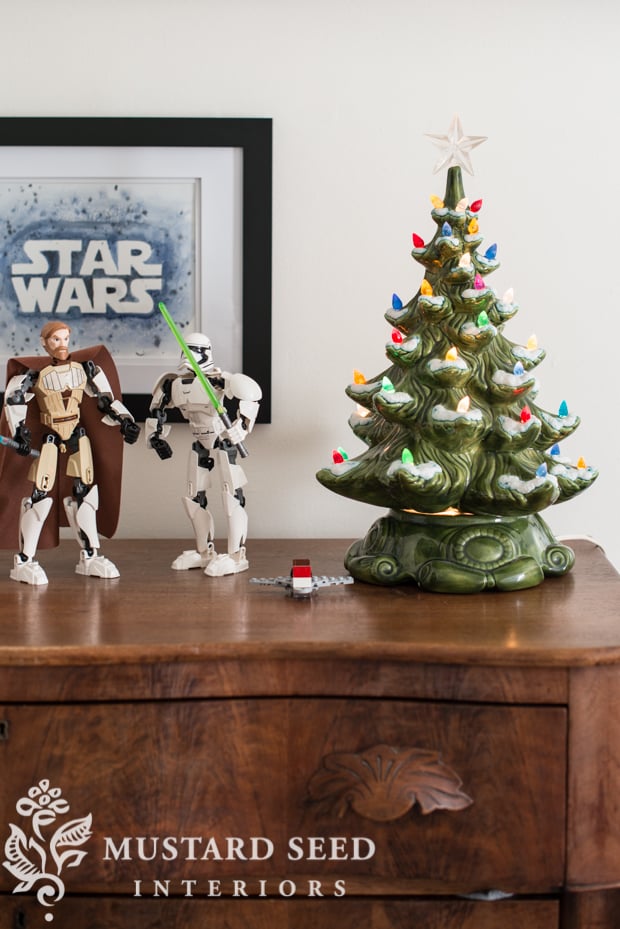 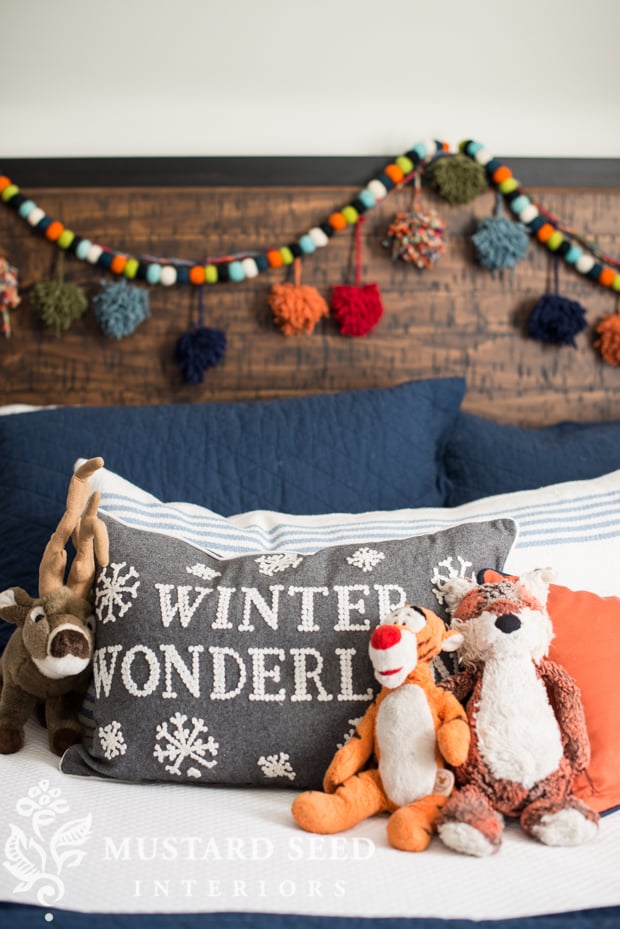 When we moved Calvin into the guest room, I wasn’t sure how much the boys would like having their own room.  I was pretty sure they would miss each other and want to move back in together.  That just hasn’t been the case, though.  They like to have sleepovers now and then, but they have each enjoyed having their own space.

Now, I need to give some more attention to Marshall’s room.  He’ll be turning 10 soon and it’s time for him to have a desk and book shelves fitting for a double-digit kid.

Disclosure: The finishing touches in Calvin’s room were supplied by Birch Lane.  As always, all opinions are my own and I only promote brands I think would interest my readers.