I love the look of paint that has been worn with time.  Chips, flakes, rubbed areas that reveal the warm patina of the wood underneath. It just speaks to me.

But, I know some people look at those pieces and wonder when you’re going to repaint or refinish them.  It’s just not a look that is up everyone’s alley.  My mom is one of those people who doesn’t like the “chippy look.”

I know!  Where in the world did I come from, right?!

She does still ask her chippy-loving daughter to paint furniture for her, though.  It’s always a good challenge for me and forces me out of my comfort zone.

For her bedroom makeover, that large oak cabinet was begging to be painted.  It felt massive and orange and a little dated as it was.

I suggested painting it in Marzipan, to keep it light and fresh, but my mom really, really, really wanted to paint it in MMS Milk Paint Bergere.  It’s hard to argue with your mom on anything, but I’ve already pushed her out of her comfort zone with the fabric and the planked wall behind the bed.

If it clashed, I would just blame her. 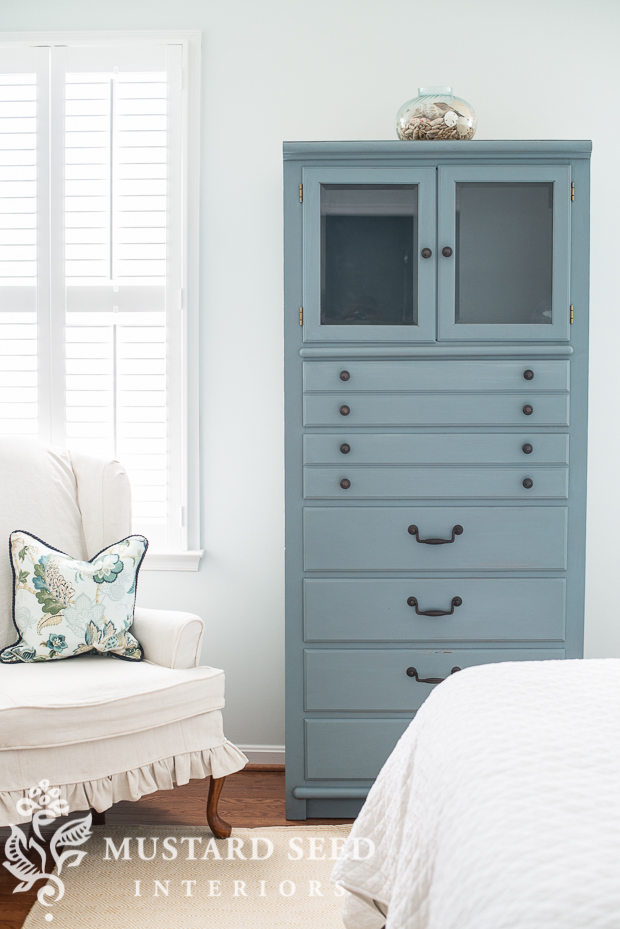 Well, it didn’t clash at all and it brought in the blue that my mom loves, so it was a win-win.

And I’ll take full credit for it, now.

Here’s how the piece looked before. 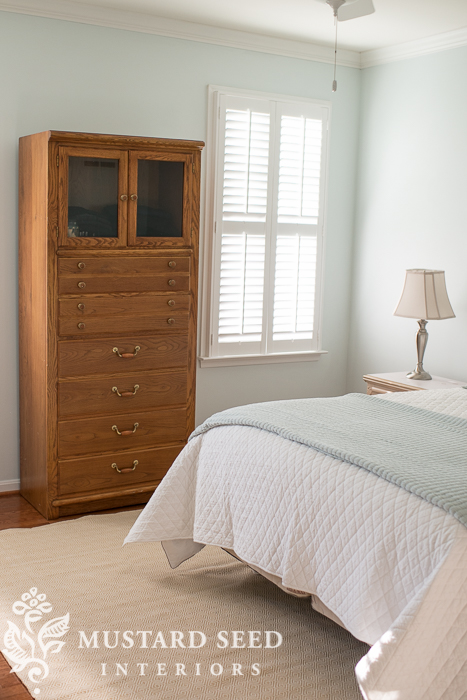 Massive, orange and dated.  I think that description pretty much nailed it.  The hardware was definitely making things worse.

The good news is that the piece had very simple lines, so some paint and new hardware would totally transform it and keep this sturdy and super-functional piece in use for many years to come. 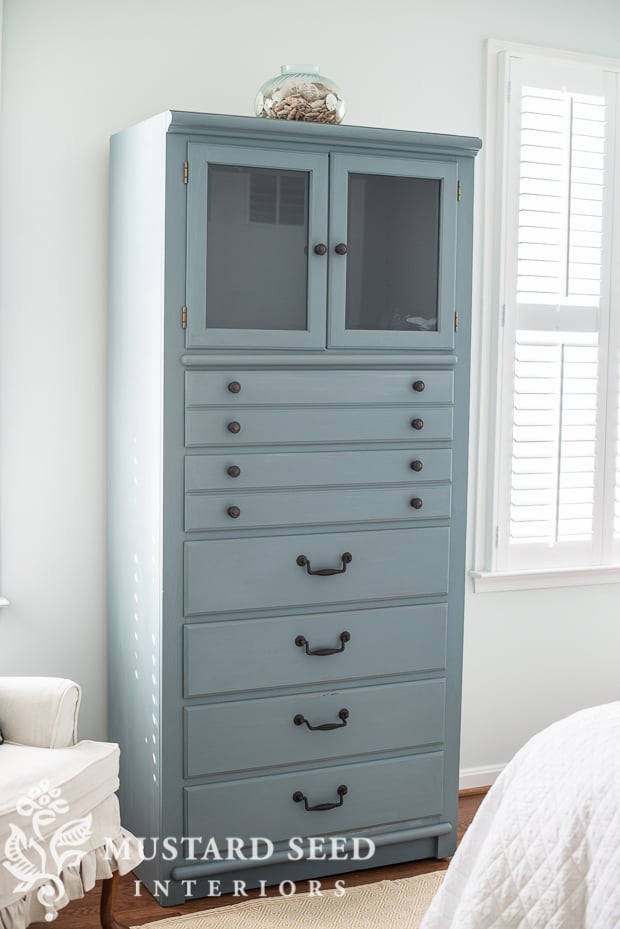 The hardware was a little tricky, because we needed clapper pulls with a 5″ span, which limits the selection quite a bit.  We ended up picking the Siena Bail Pull in Ancient Bronze.   They were a bit dear at $18.95 each, but I’m pretty comfortable spending my parent’s money.  Kidding. 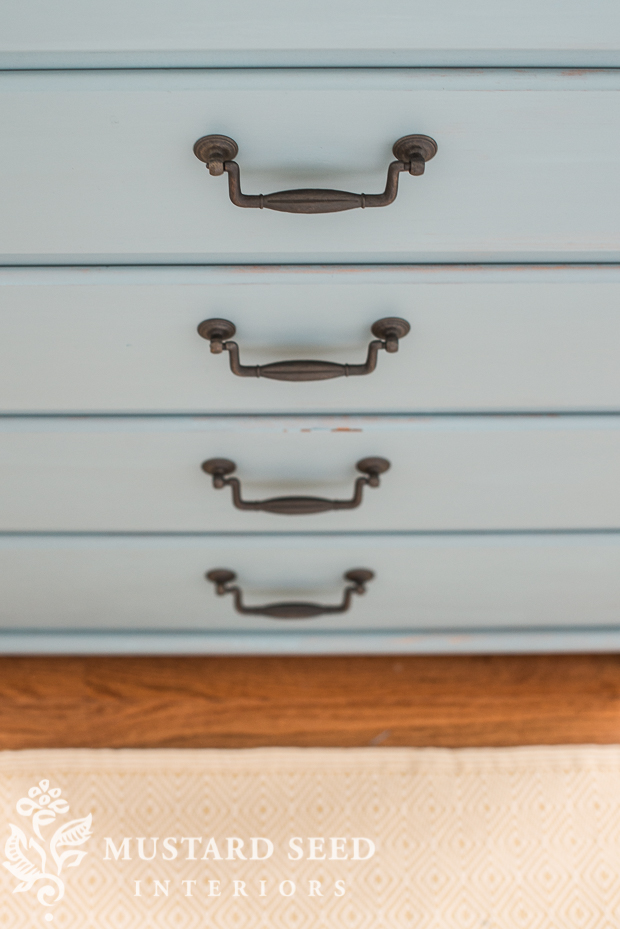 We bought these knobs from Amazon for the rest of the drawers and doors. 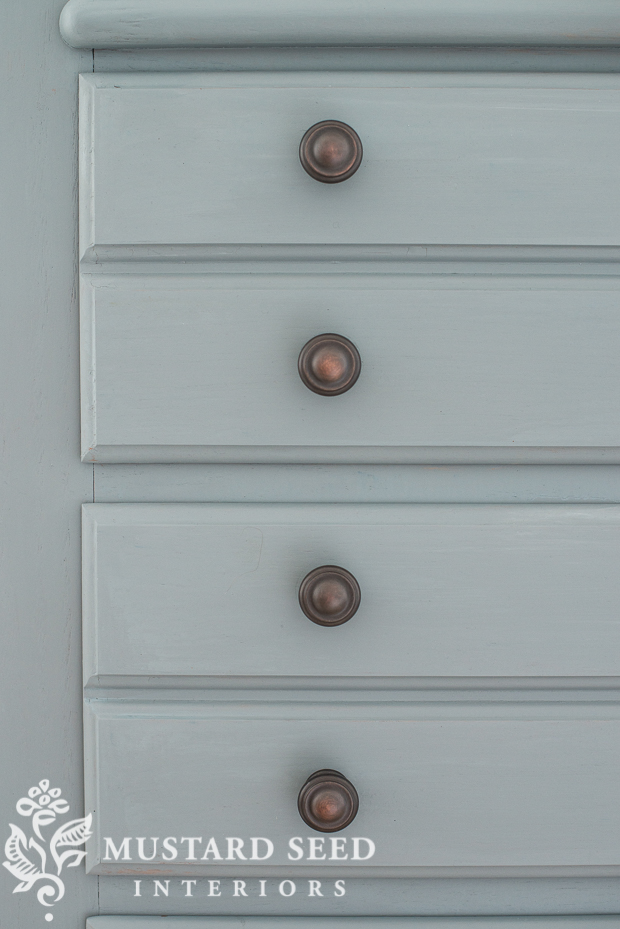 To get this super-smooth look on a glossy, oak piece, my parents removed all of the knobs and sanded the entire piece with medium grit sand paper.  We then painted the piece in Bergere with the Bonding Agent added to it.

It ended up taking two coats and just over one bag of milk paint, since it’s such a massive piece.  Once it was dry, we applied Hemp Oil for a smooth finish. 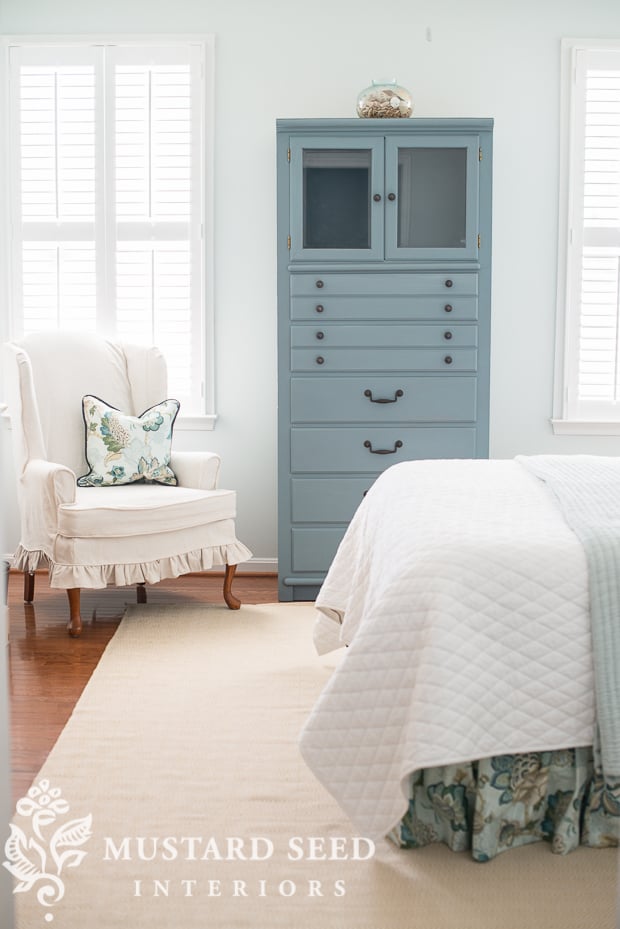 I know I keep saying this, but the built-ins are almost done.  I hope we’ll be installing them later this week and then it’s all about the accessories and finishing details.

If you’d like to see how far this room has come, you can catch up here…

part 2 | the before pictures

part 5 | the bedskirt & the built-ins