If you follow my on Instagram, you know I have started my next art challenge!  I am much more focused when I have a challenge before me, so when the 100 meadows project ended, I needed a new one.  I initially thought I would paint faces/portraits, but I realized I would be painting off of photographs again and, after painting 100 landscapes from photographs, I was starting to see (and experience) the issues and limitations that come with painting with a 2D image.  This led me to still life.  I can set up a scene in my studio, control the light, look at it, and paint it.

Here are the first twenty paintings in the series…

(The ones that have a “buy here” link underneath are for sale via auction.  The rest have already sold or have not been listed yet.)

I knew the benefits of painting a still life, but it felt a little like going into an ab workout.  I wasn’t very excited about it, but it was exercise that “had to be done” to grow as an artist.  I was determined to paint things I like, though, and not a random collection of objects, like an arrangement including a bowling ball, a bottle of wine, and an egg.

So, I started with a green apple and got ready to do my “workout”.  That’s how I approached painting number one and I feel like you can see that. 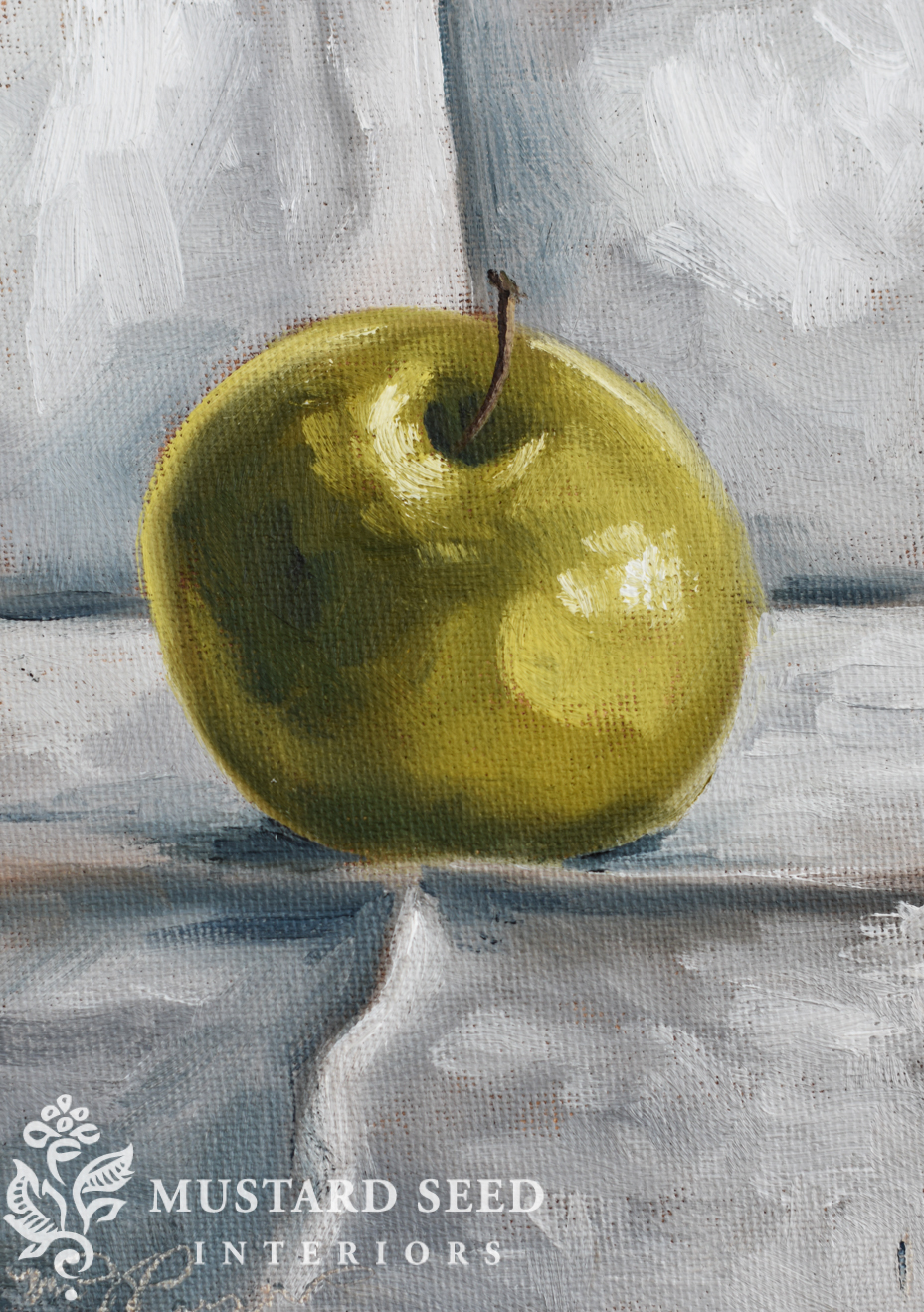 First of all, I was tight and the painting looks tight.  I was distracted by the folds in the linen and probably spent more time fussing with those than I did on the apple!  It was a challenge to visually and mentally block out everything outside of the frame as well!  I also really struggled to interpret the colors I saw in front of me.

When I finished, though, I didn’t hate it.  I could, however, see there was a whole world of improvement that needed to happen.  So, I hit the art books again.  I went back to Daily Painting by Carol Marine.  It’s a very practical book that shares a lot of information on still life painting.  One of the exercises Carol “assigns” is “10 minute apples”.  It’s pretty much as it sounds – paint an apple in 10 minutes.  Repeat.  Repeat again.  Paint them to learn and to watch your progress in 10 minutes increments.

For my fist 10 minute apple, I put it in a cup and I realized about 8 minutes in that the cup was a bad idea.  The painting had a quirkiness and looseness that I liked, though, so I pressed on… 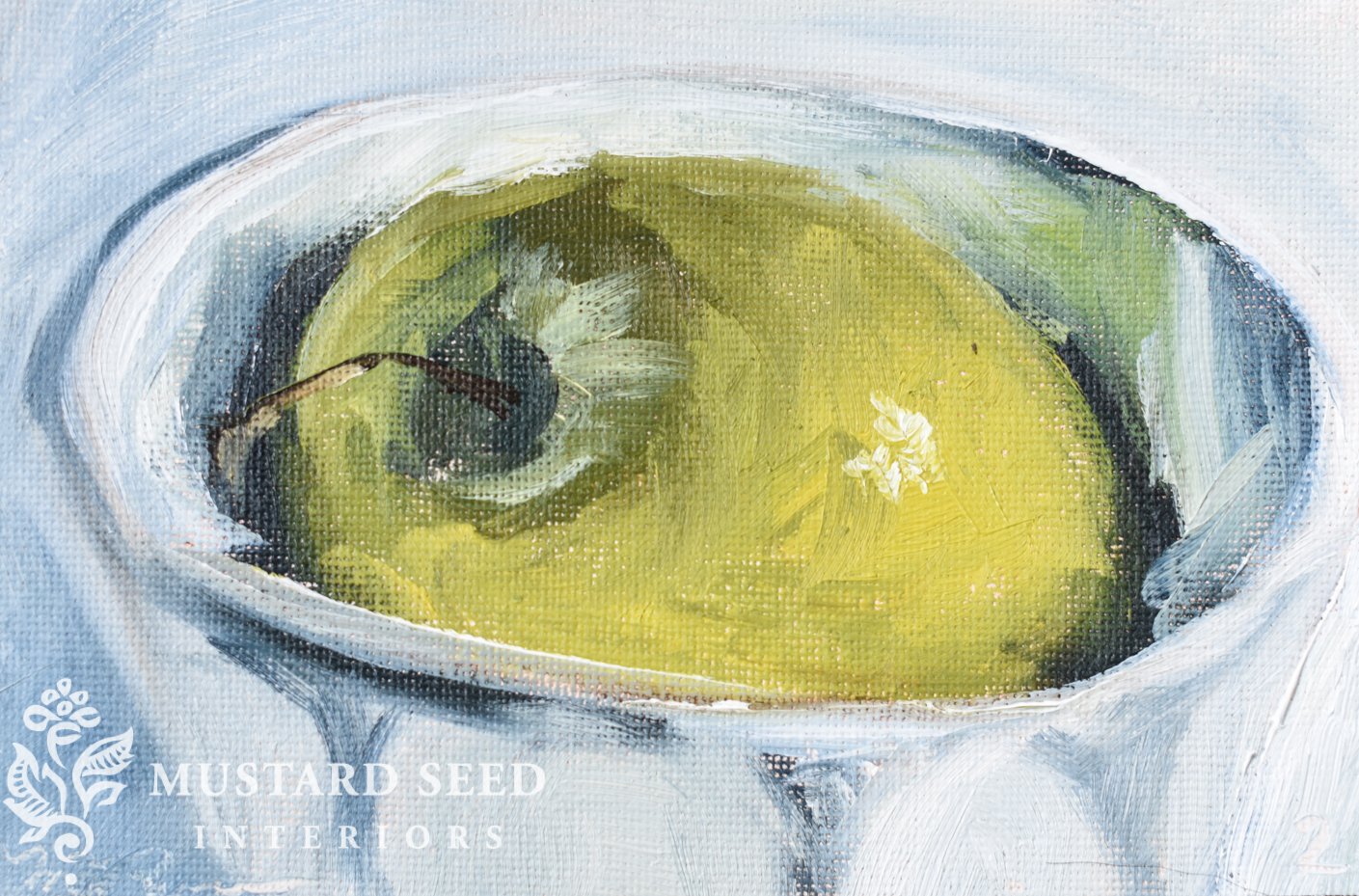 Then, I felt like magic happened.  I absolutely love my second 10 minute apple. 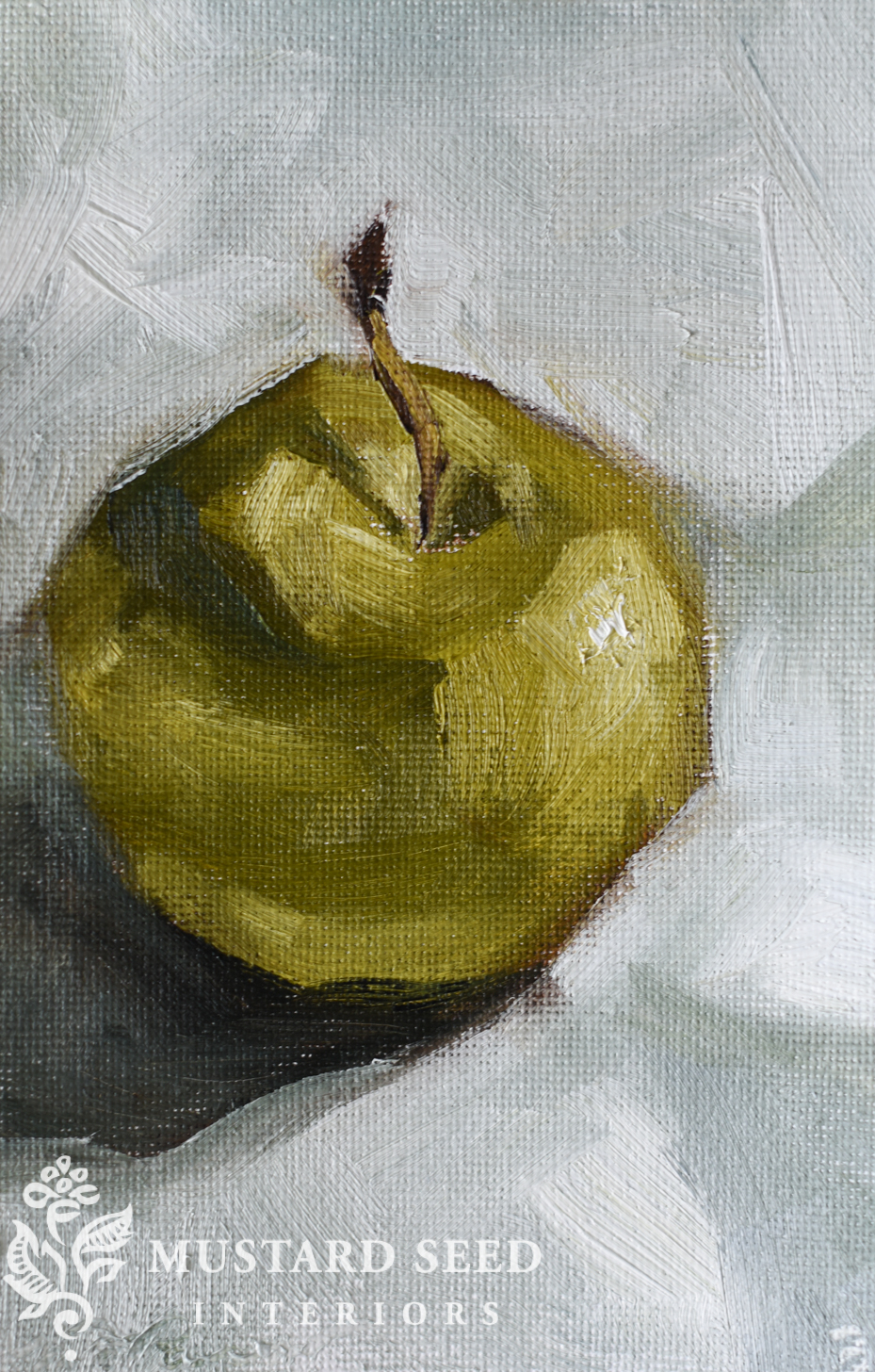 It’s lose, but it doesn’t look messy.  It was such an encouragement to see the “exercise” already paying off and it didn’t feel forced. 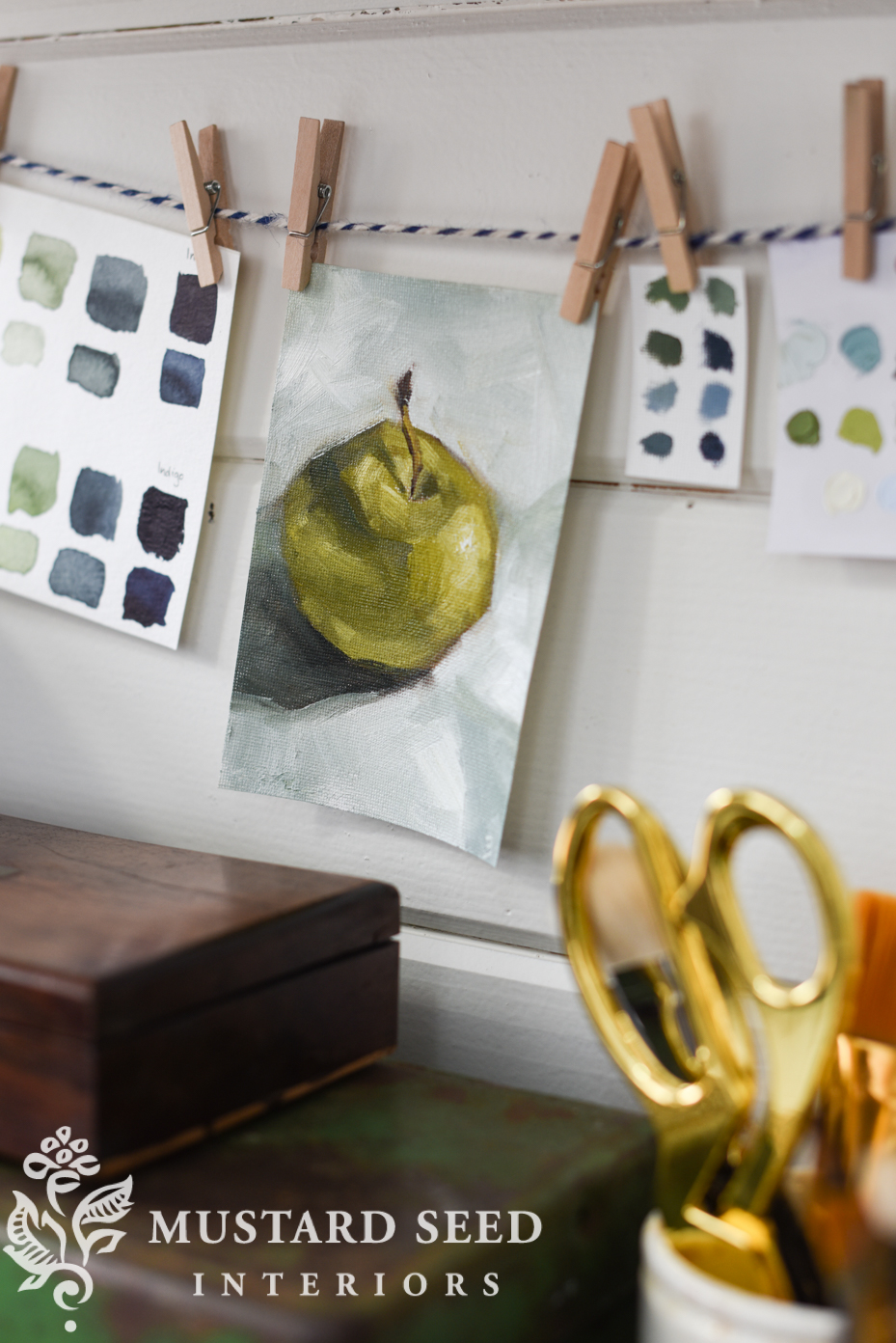 Number 4 in the series didn’t feel quite as magical, but I was still happy with it… 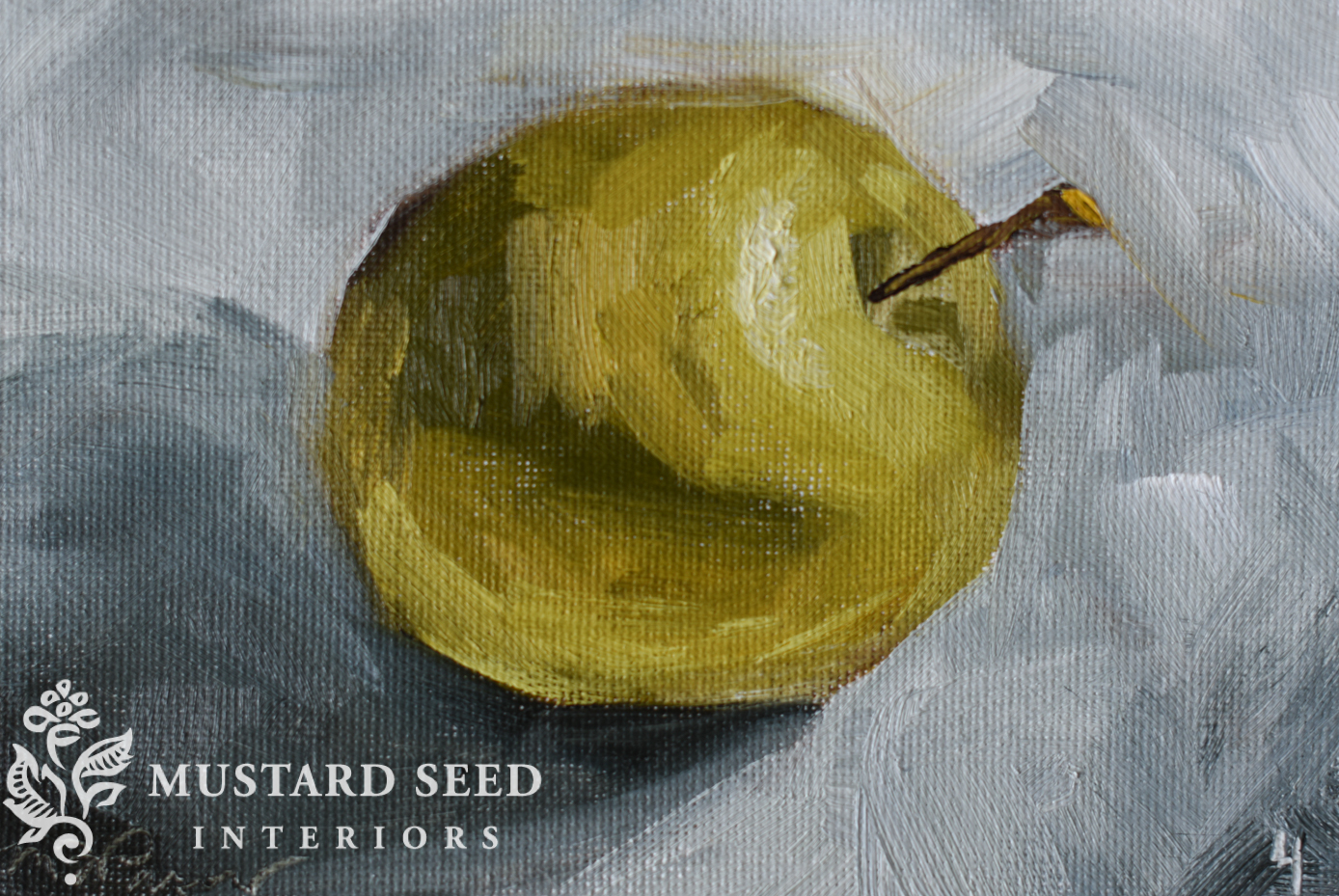 In the next painting session, I figured I had better try painting another fruit, lest I end up with 100 apples!  So, I opted to paint an Anjou pear.  I had them on hand and they weren’t too far removed from the apples I had been practicing.  I also swapped out the white background, which looked blue/gray anyway, for black.

Number 5 was a bit of a disaster when the 10 minute timer went off, so I allowed myself a few more minutes to work things out.  The pear was fine, but the background had too much contrast.  I softened the “wrinkles” in the fabric, so they weren’t such a feature and then I really liked it.  (As an aside, this is one thing I love so much about oils.  An area can be worked and reworked in a way you could never do with watercolors, or graphite sketches, or acrylics.  Oils are so forgiving!) 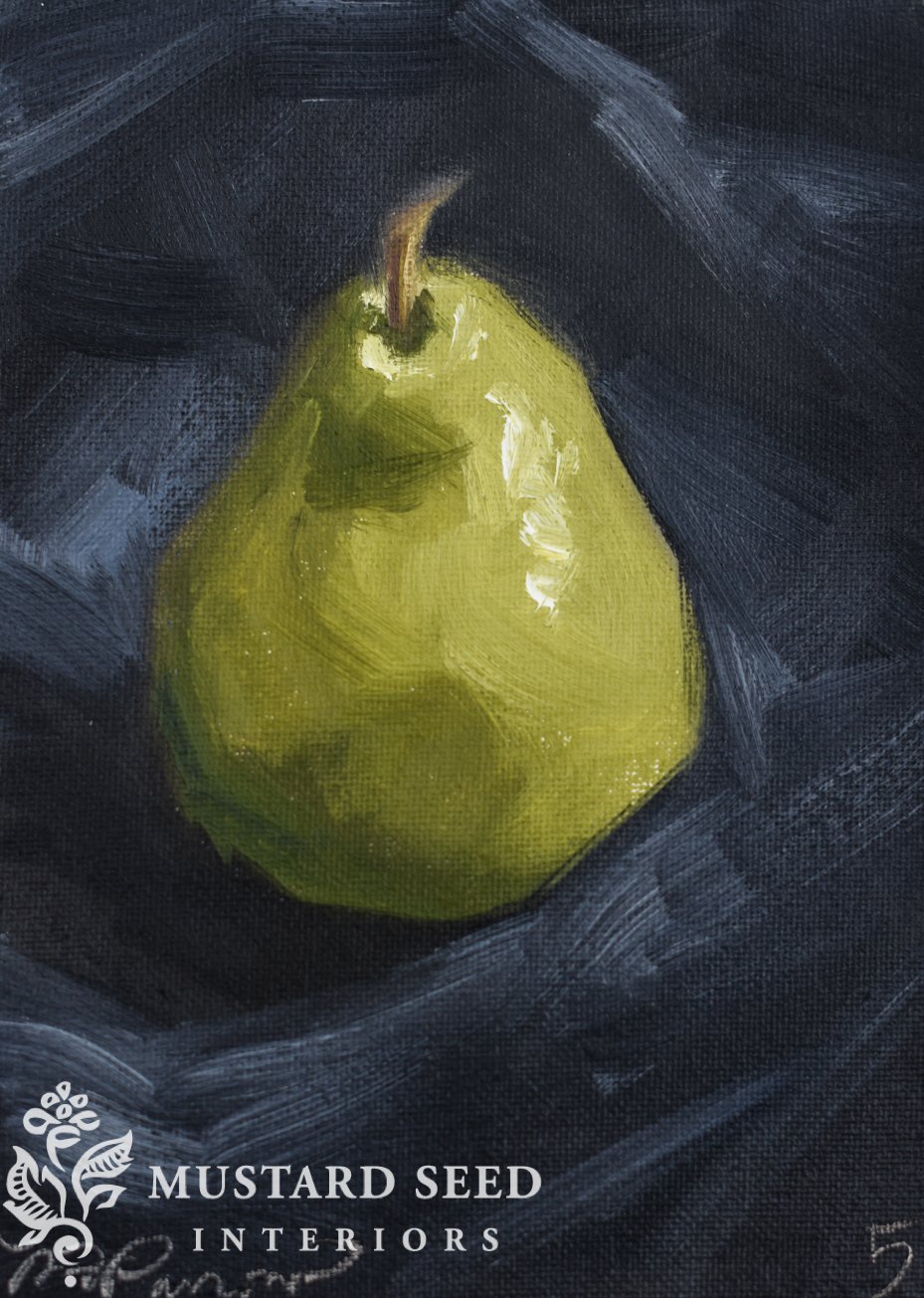 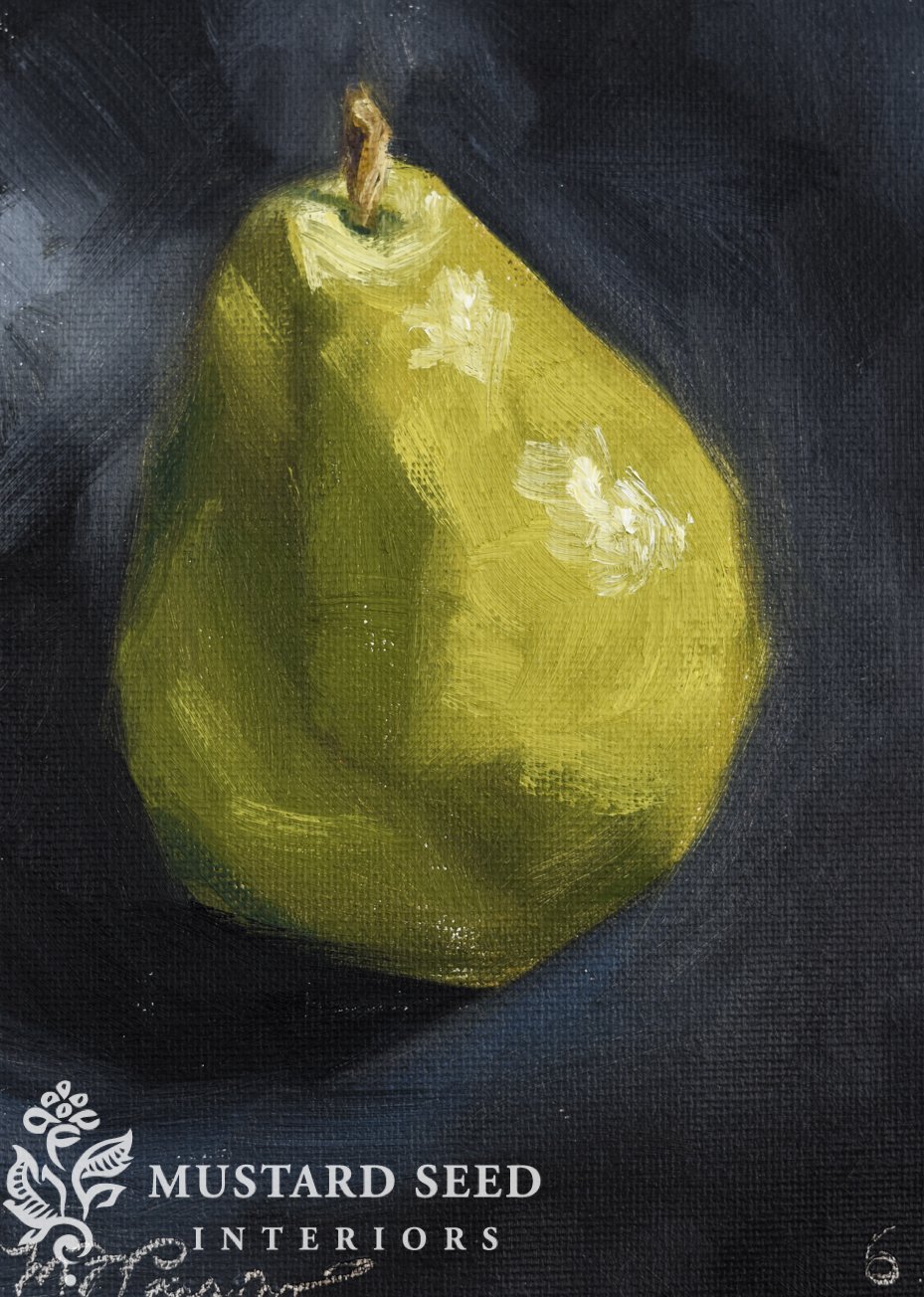 For number 7, I stuck with the pear, but changed out the background again and put a transferware plate underneath.  This one took me a while, mostly because of the detail on the plate, but I was so pleased when I stepped back and realized you could “see” the design with just a hint of it actually painted.  I didn’t need to stress about detail so much. 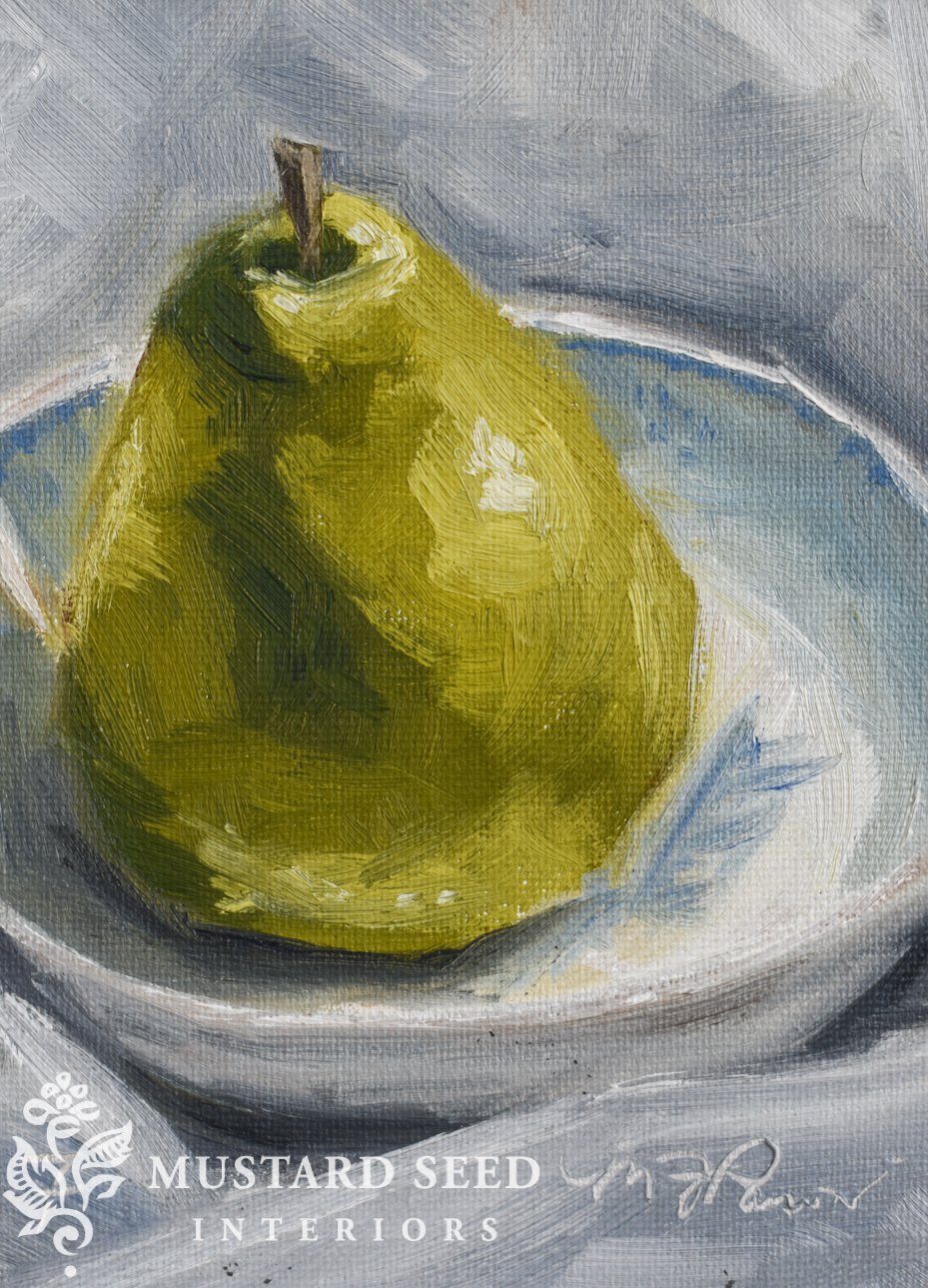 You’ll see throughout this series that I’ll work on something that’s challenging and then escape back to a 10 minute piece of fruit to have a small victory or to stay loose.

This is a 10 minute apple, though, that got a little too loose!  I called it a “blurry apple”, but there was something about it that I sort of liked.  It doesn’t feel like my style, but I like that I created something that feels whimsical. 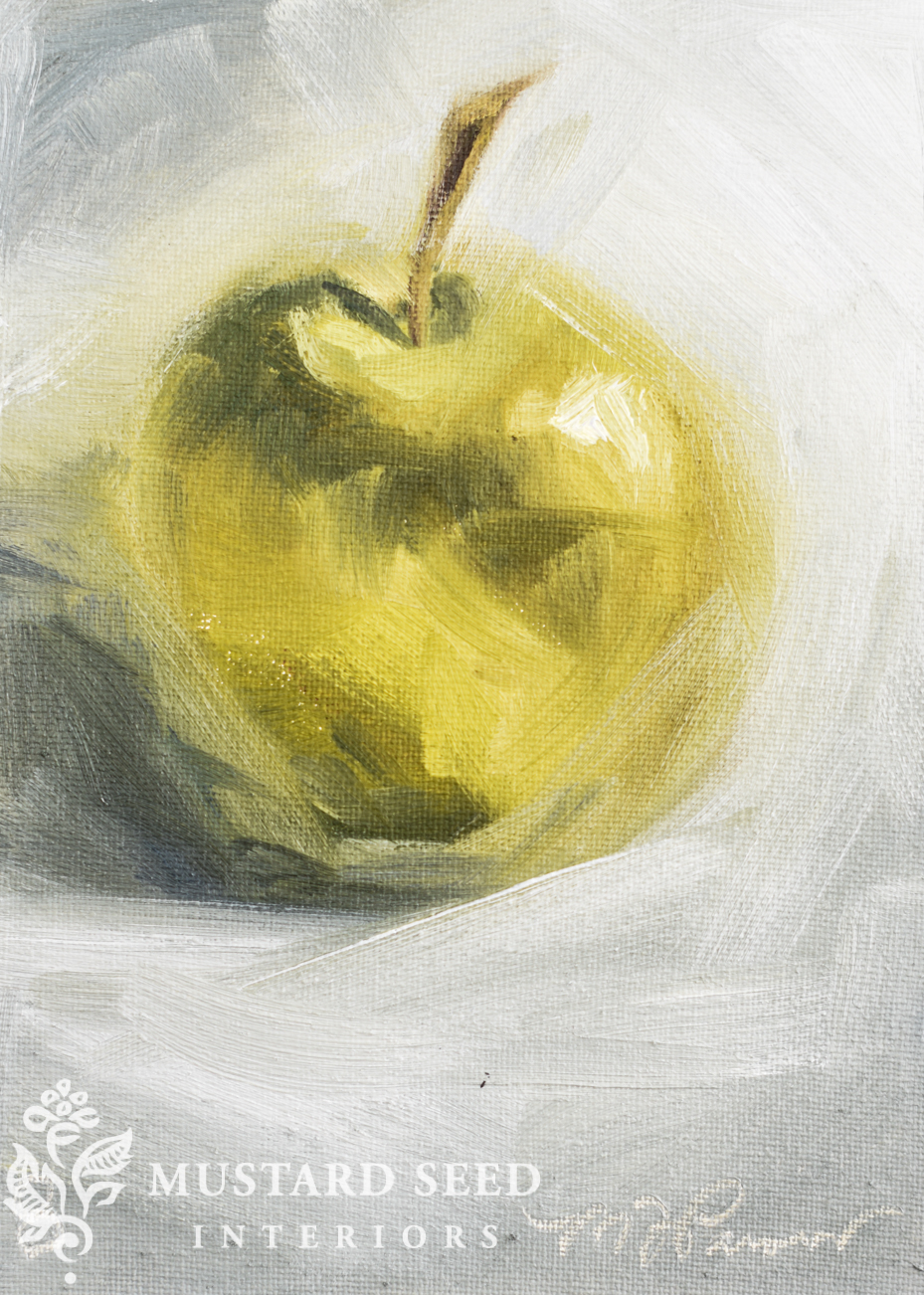 I tried something different and more challenging with a paper berry basket and some blueberries.  I had some perspective issues and the strange lighting was a challenge to capture, but I still ended up liking this one and I learned a lot in the process. 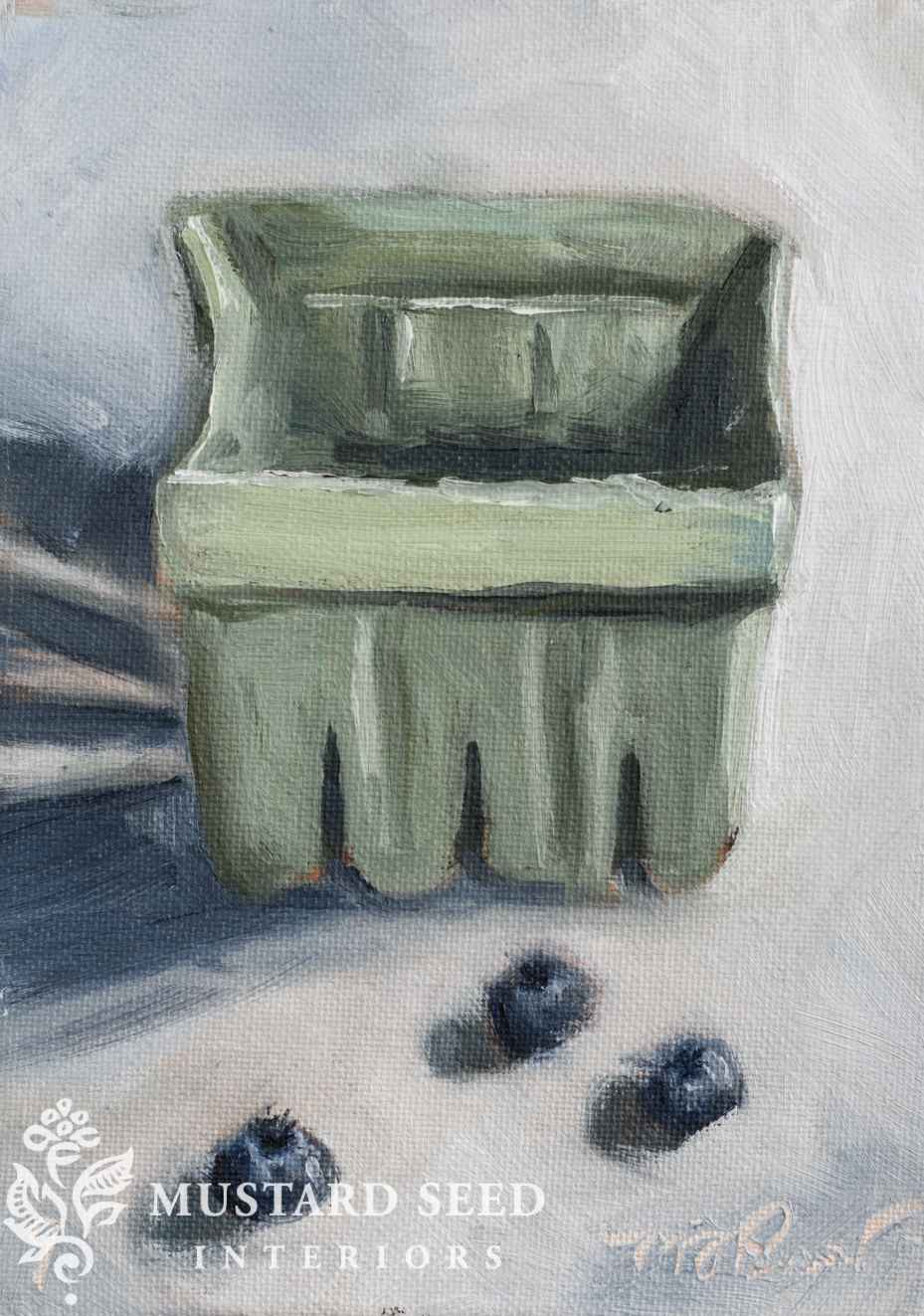 Again, I wanted to do something different, so I pushed myself with lemons on transferware.  I struggled with making the lemons look like they were spaced properly and nestled together and also with the shadows!  I have never pondered the color of a lemon’s shadow before, but I was now in a position where I needed to ponder it and paint it!  This was wasn’t a total disaster, but I knew I needed to work on lemons some more! 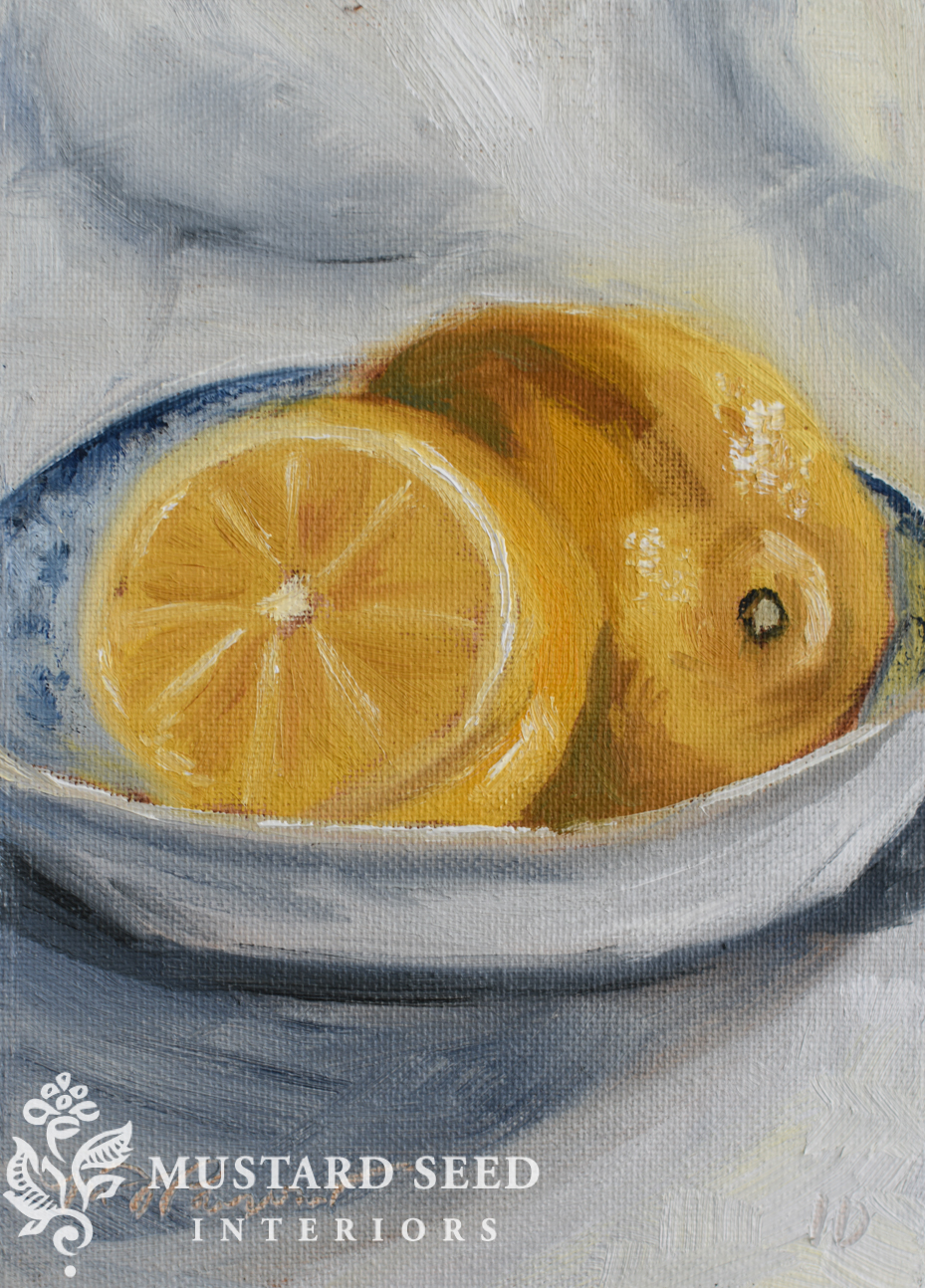 Retreating back to a “10 minute apple” after my struggle with lemon shadows. 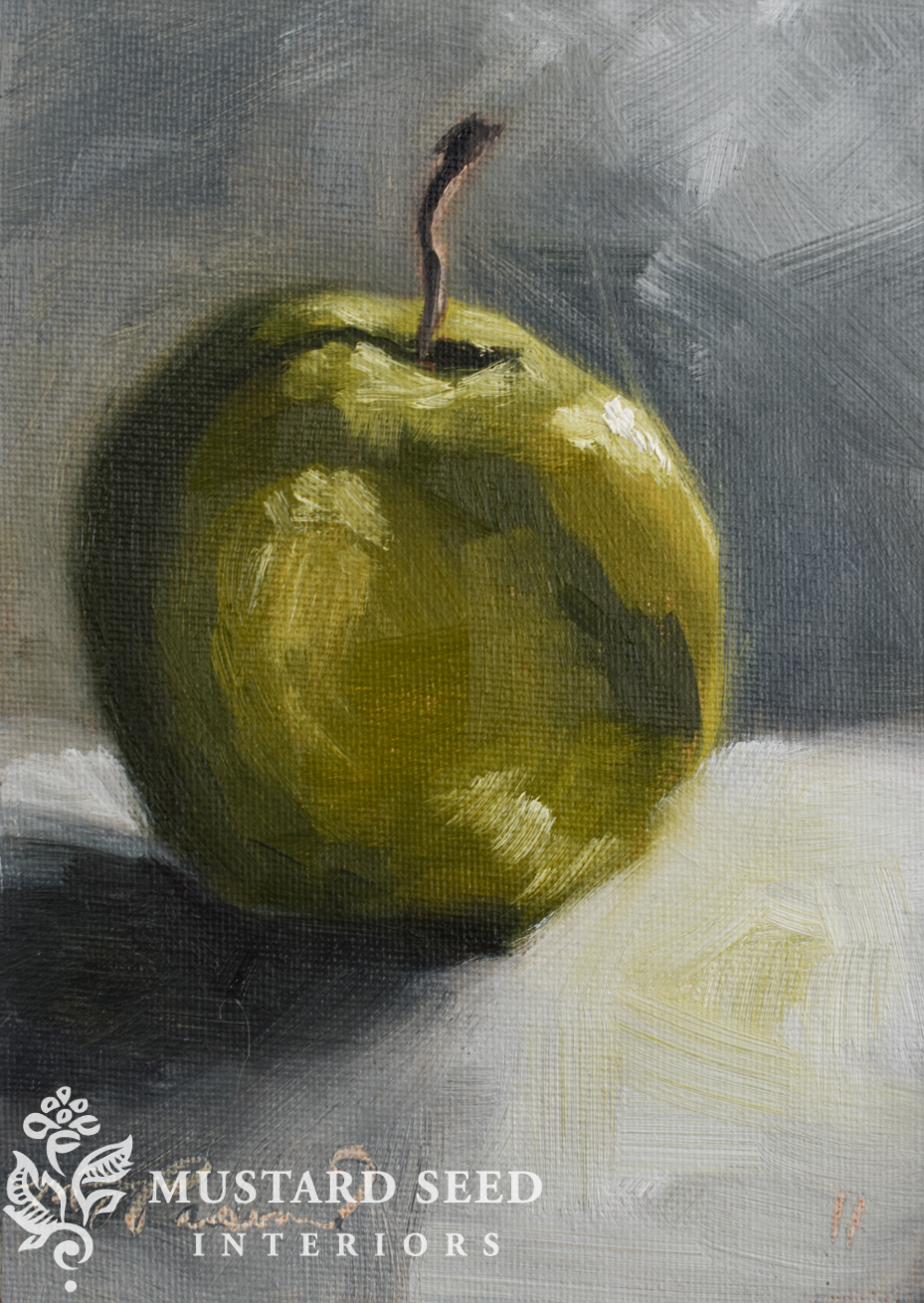 This is one that I definitely forced.  I wanted to try another berry basket, but this one was a challenge from start to finish.  Truth be told, it’s probably one I should’ve wiped and started over.  In fact, I did a few times, but after spending two hours on it, I didn’t have the heart to start over.  I learned a lot about perspective, though, and about putting the brush down when I’m just “not feeling it.”  There are some things I like about this painting, but I feel like you can tell it was an “off” day when you compare it to other paintings that have more confidence. 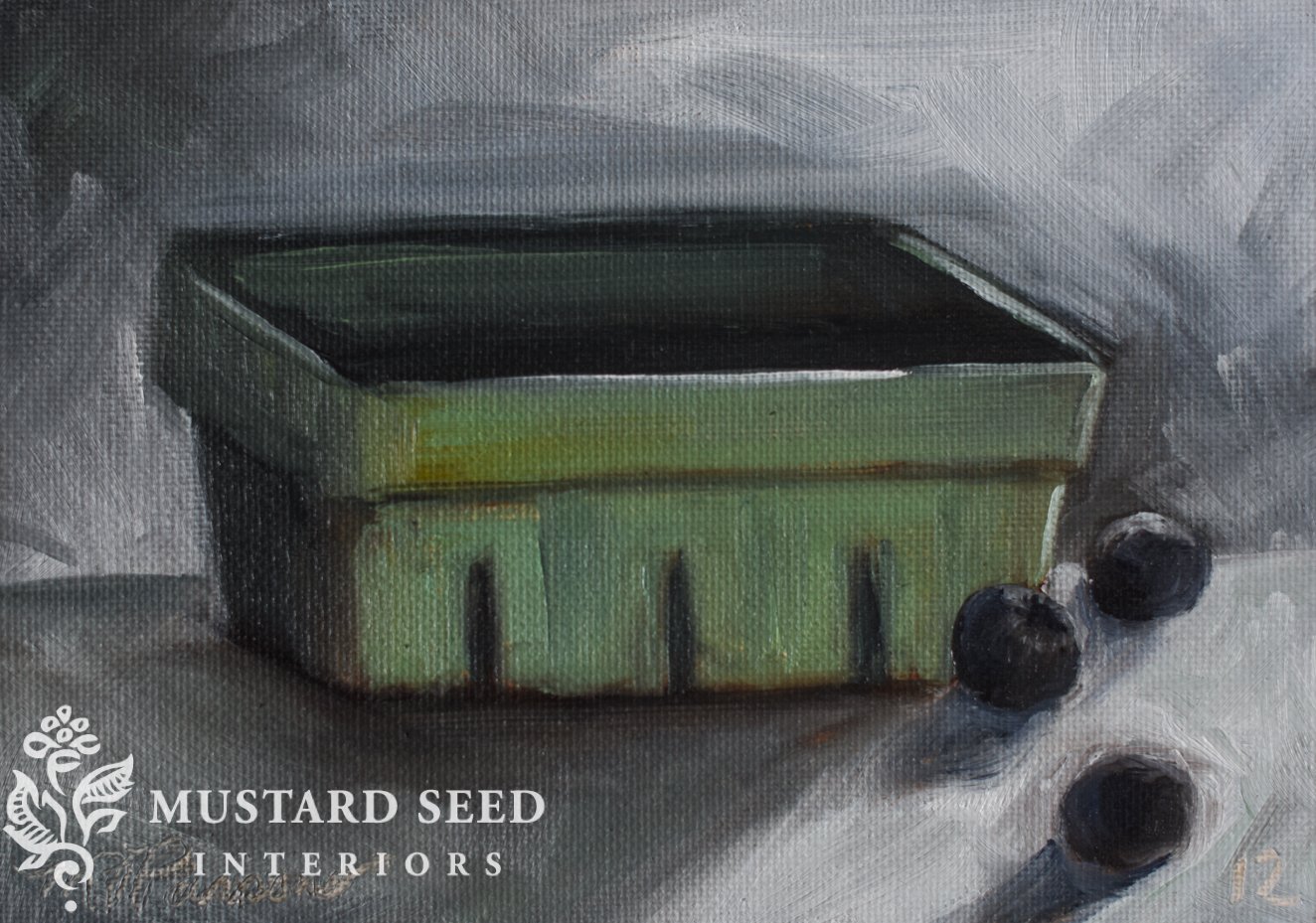 I was nervous to start a painting after the struggle of twelve, but I wanted to try the lemon shadows again!  In the early stages of this one, I thought it was going to be a total wipe-worthy mess.  I pressed on, though, and it’s one of my favorites of the entire series. 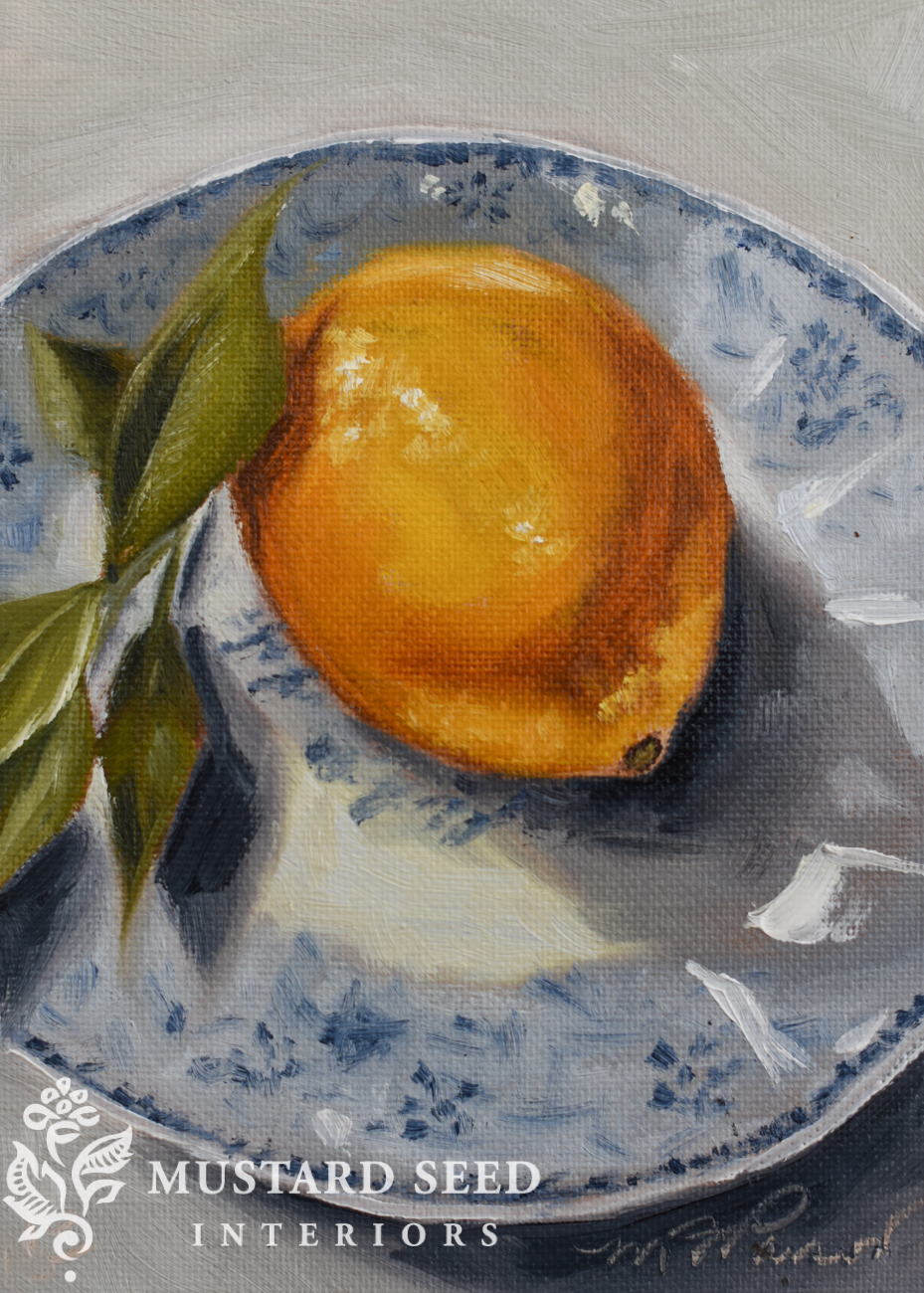 I really enjoyed painting the transferware plate, so I tried it again with an apple. 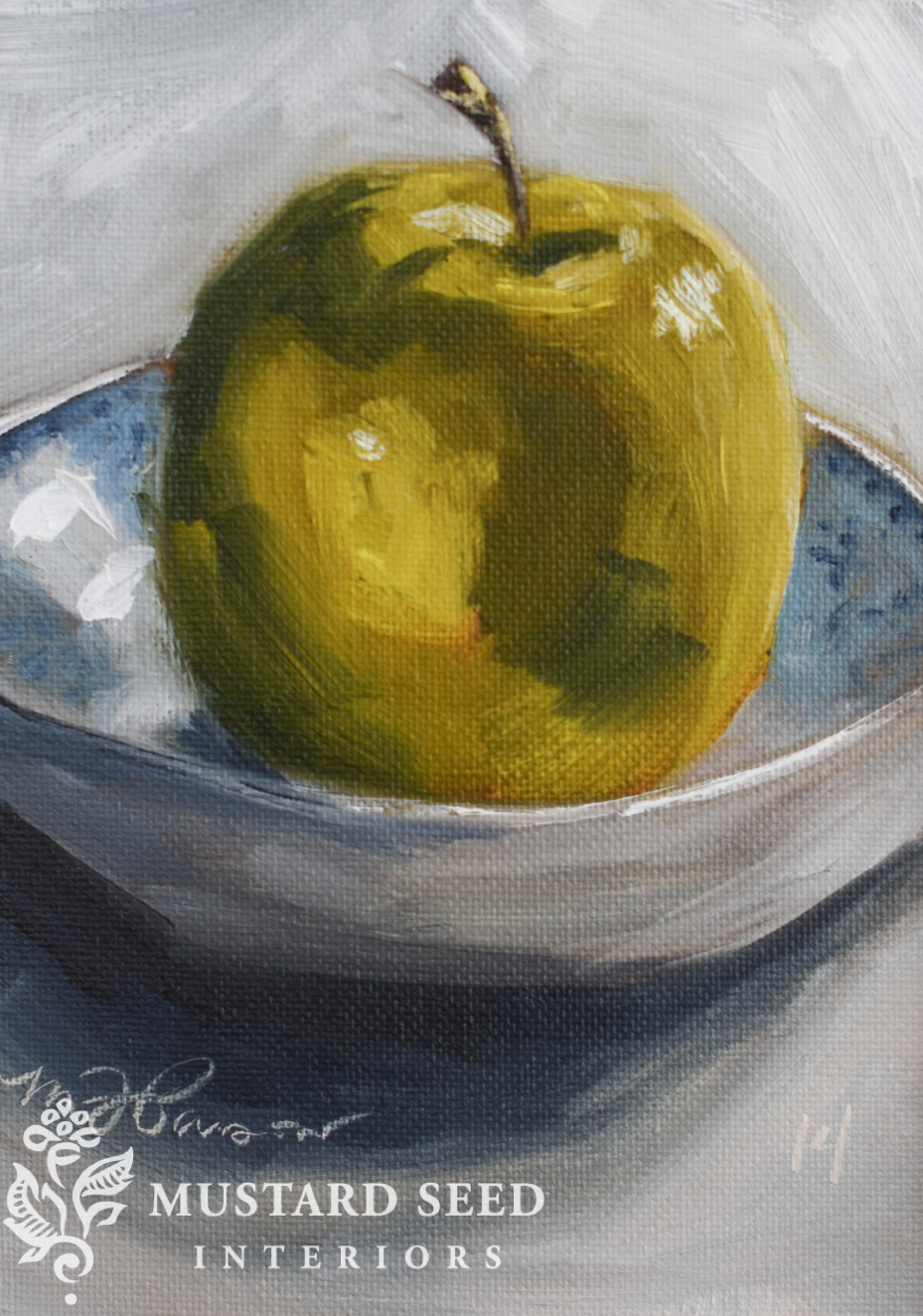 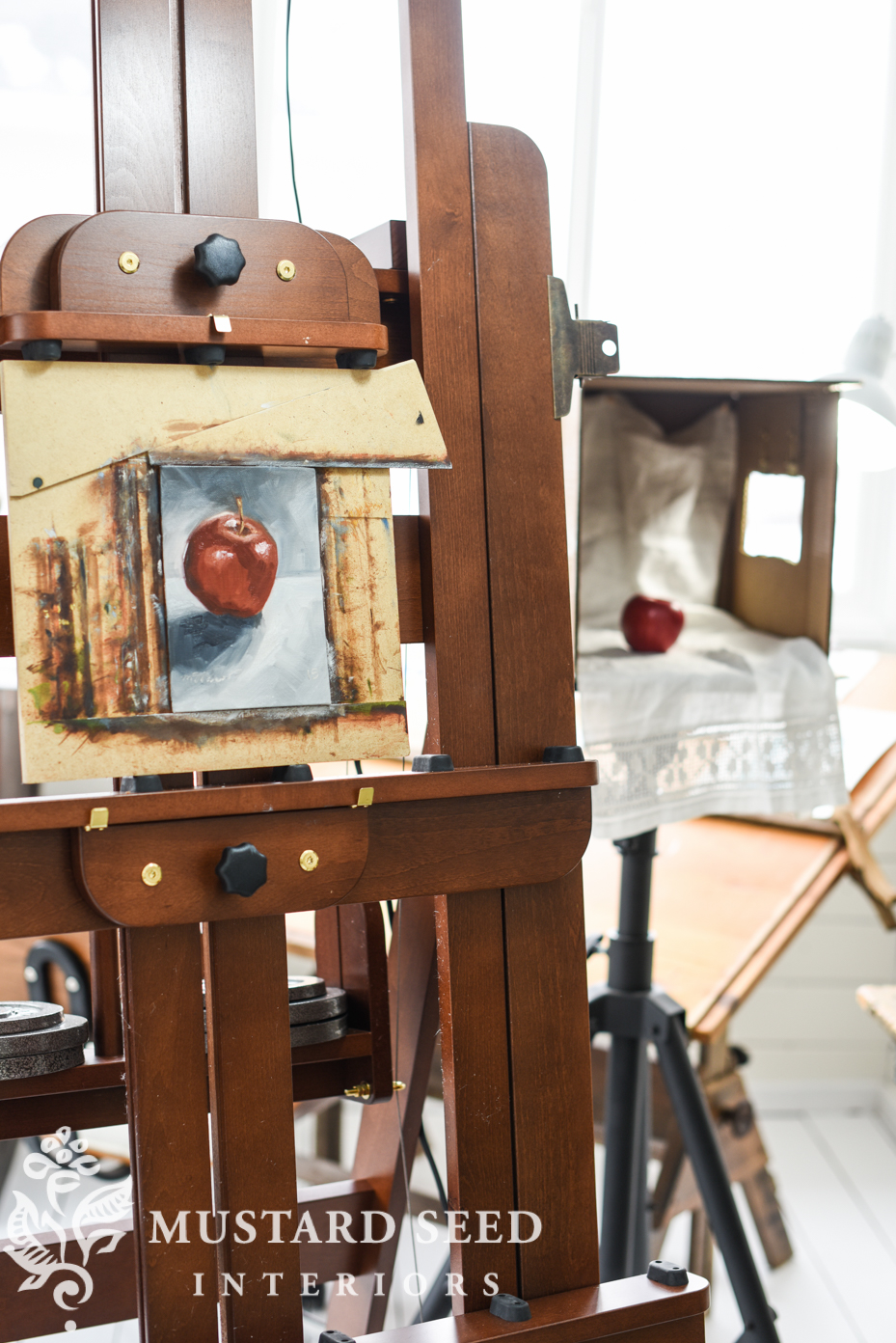 I felt like I needed to break away from the green apples and try red.  So, I grabbed a red apple from the fridge and got to work.  I’m sure I’ll come back to red apples again, but I didn’t enjoy painting this one at all!  Red was much harder for me and I think that’s largely to do with the fact that I don’t use it a lot in decorating. 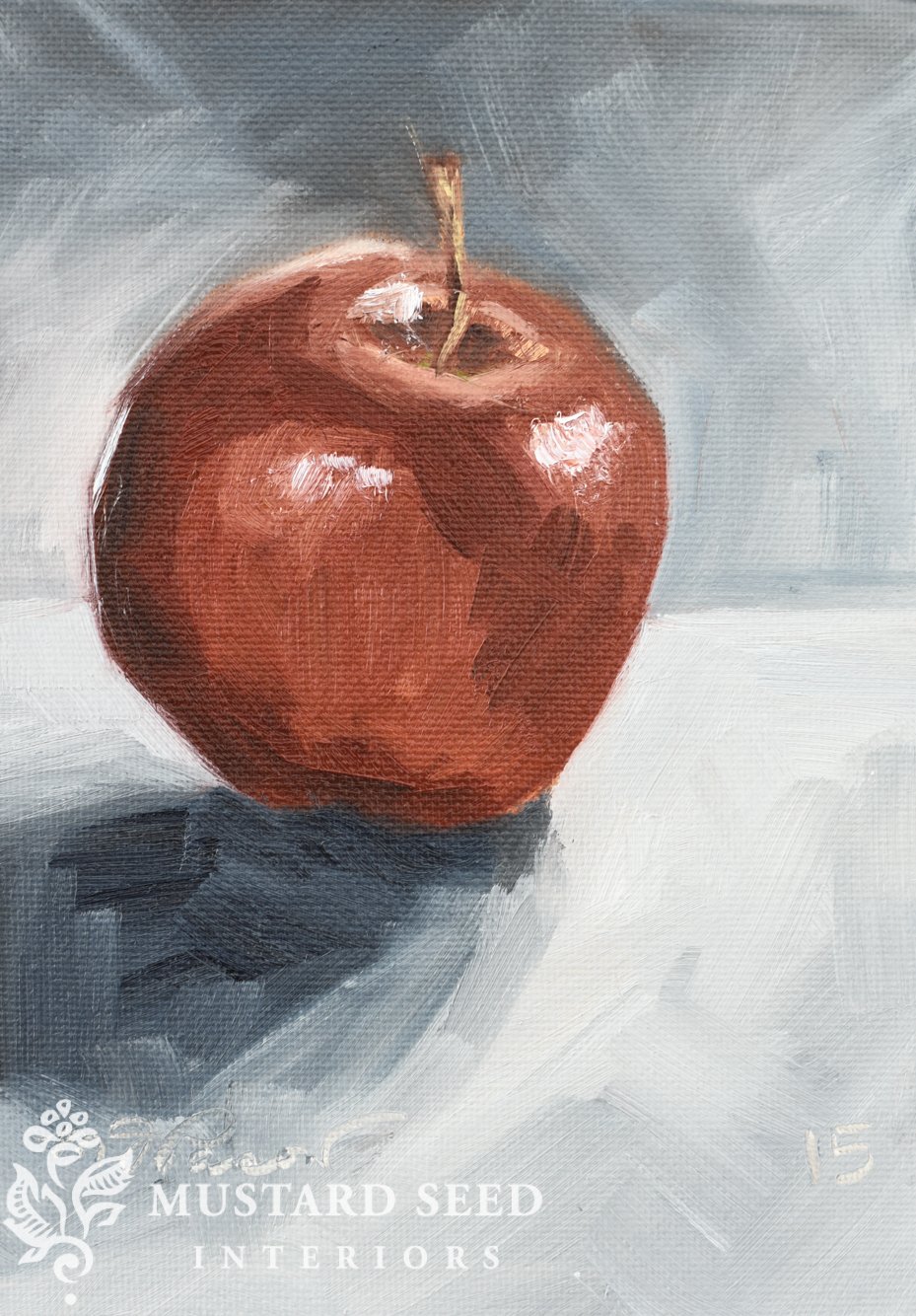 Back to lemons!  This time, I wanted to paint the lemon on a white plate, since I’m working on making my whites look more realistic and less “blue”.  I enjoyed adding the linen towel detail on this one, but I still need to work on the whites! 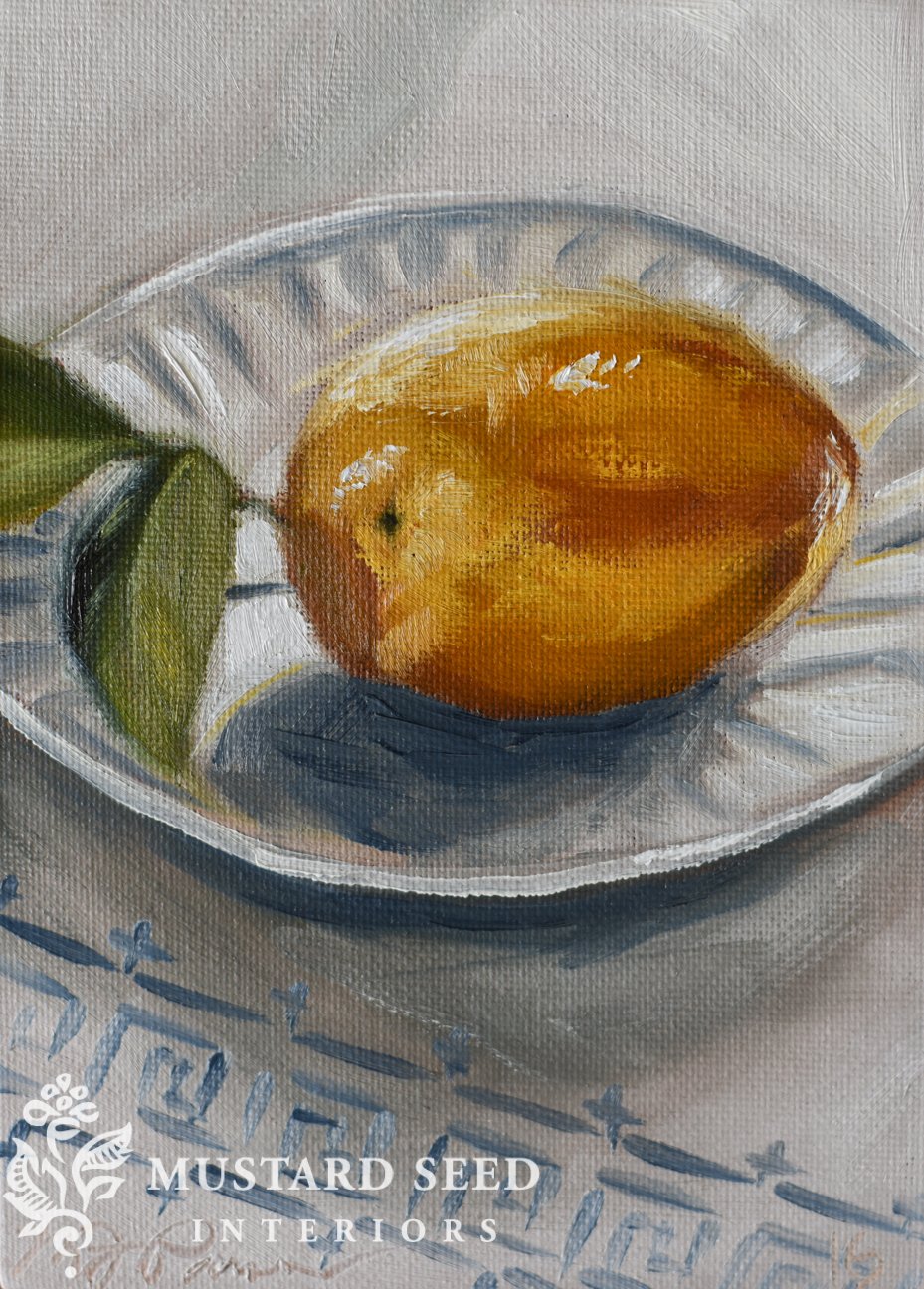 I went with an all-out challenge with this one and painted a bowl of tipped strawberries.  This is one that I have mixed feelings about.  I love parts of it and I’m very pleased overall with my first attempt at strawberries and a more complicated still life, but I can also see areas I need to improve. 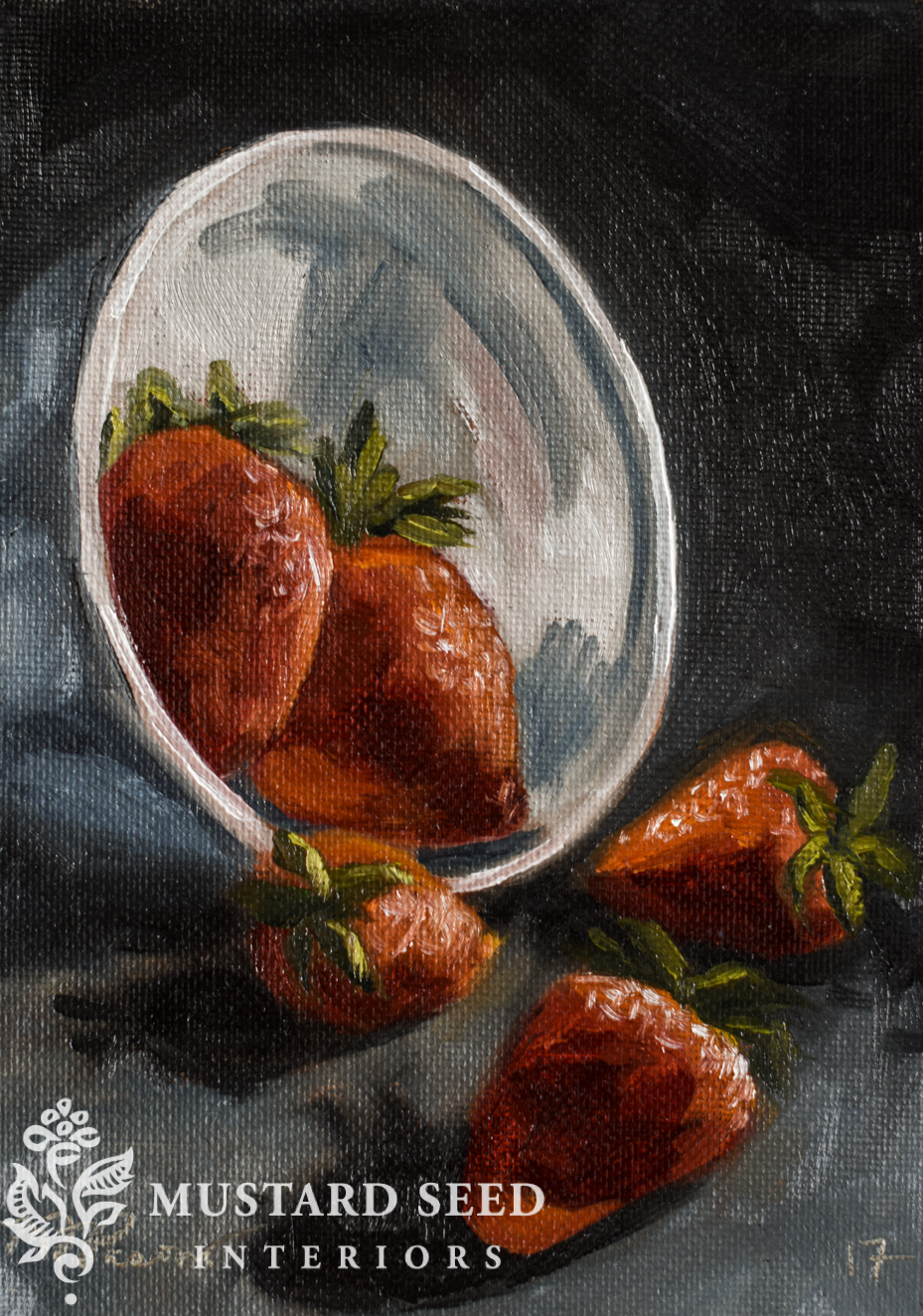 Back to a 10 minute apple, but this one is on a black background and I love it!  It looks “glowy” to me and I’m happy with the subtlety of the light and shadows on the black fabric. 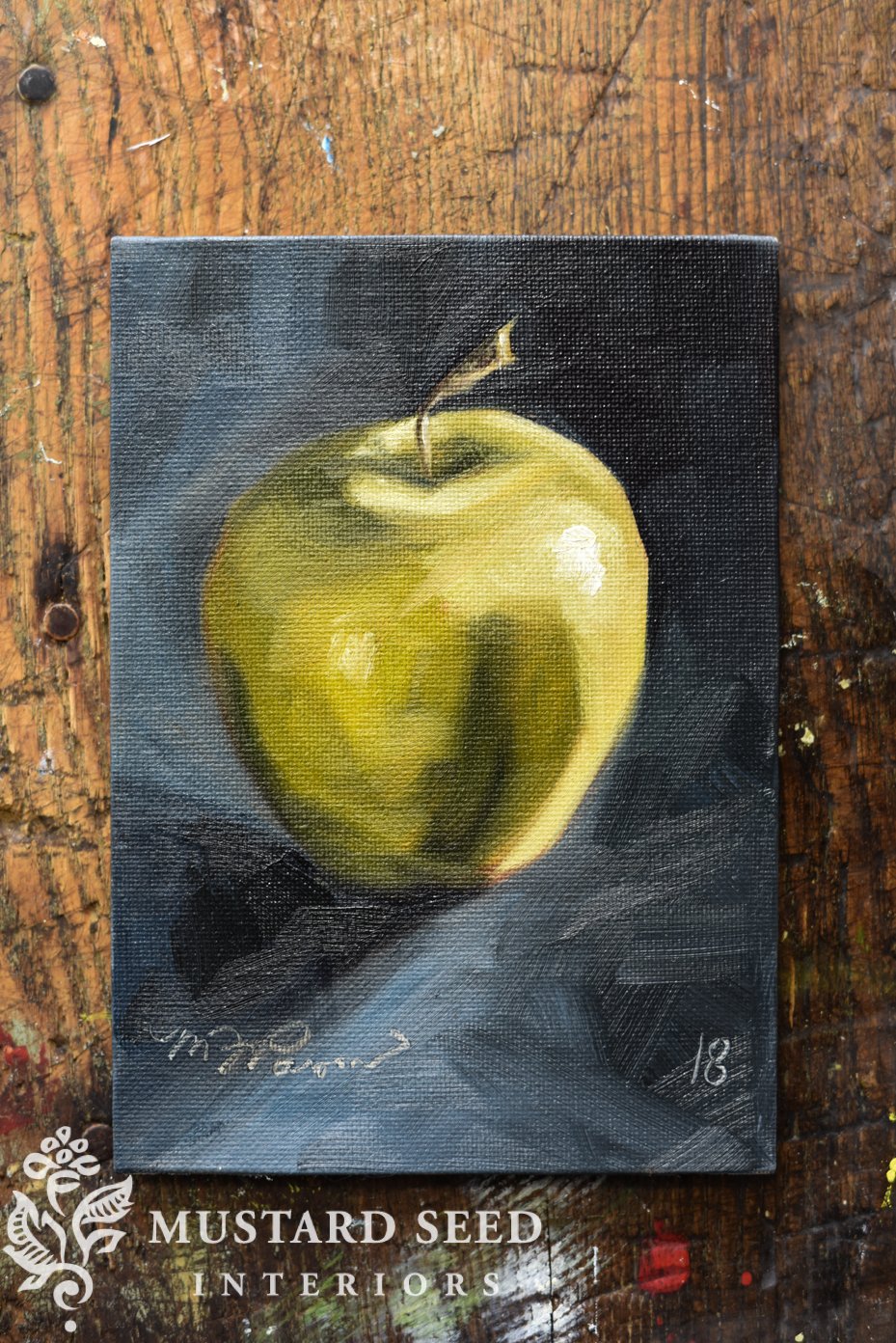 I recreated the lemon painting I loved so much, but this time, I used an apple.  This one is another favorite!

Just to show you the progression, here is the still life that I painted.  I have started taking a picture of with my phone before I start painting, so I can reference it as the light changes (when I’m painting during the day) and I can check my composition. 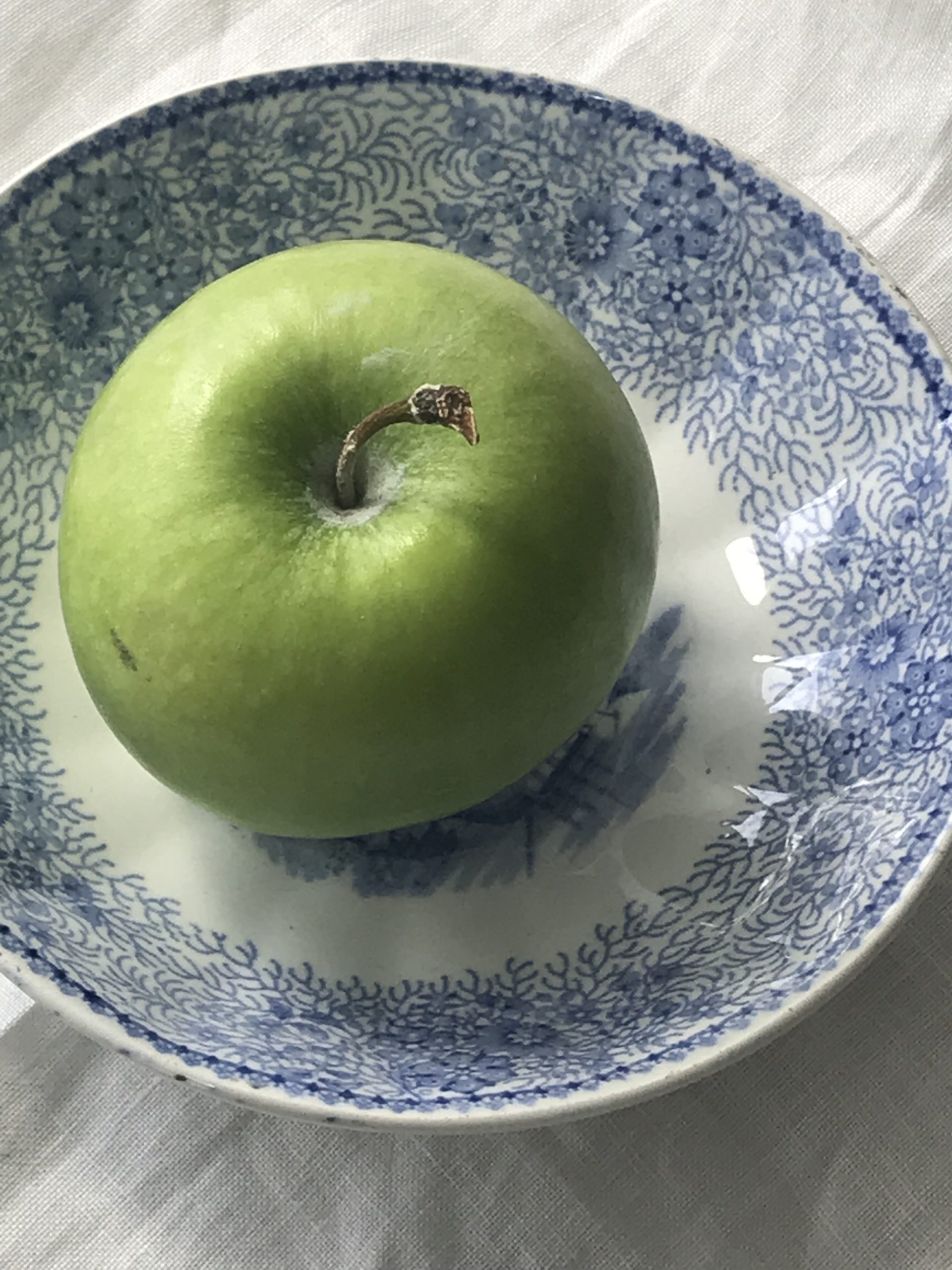 Here is the underpainting sketch… 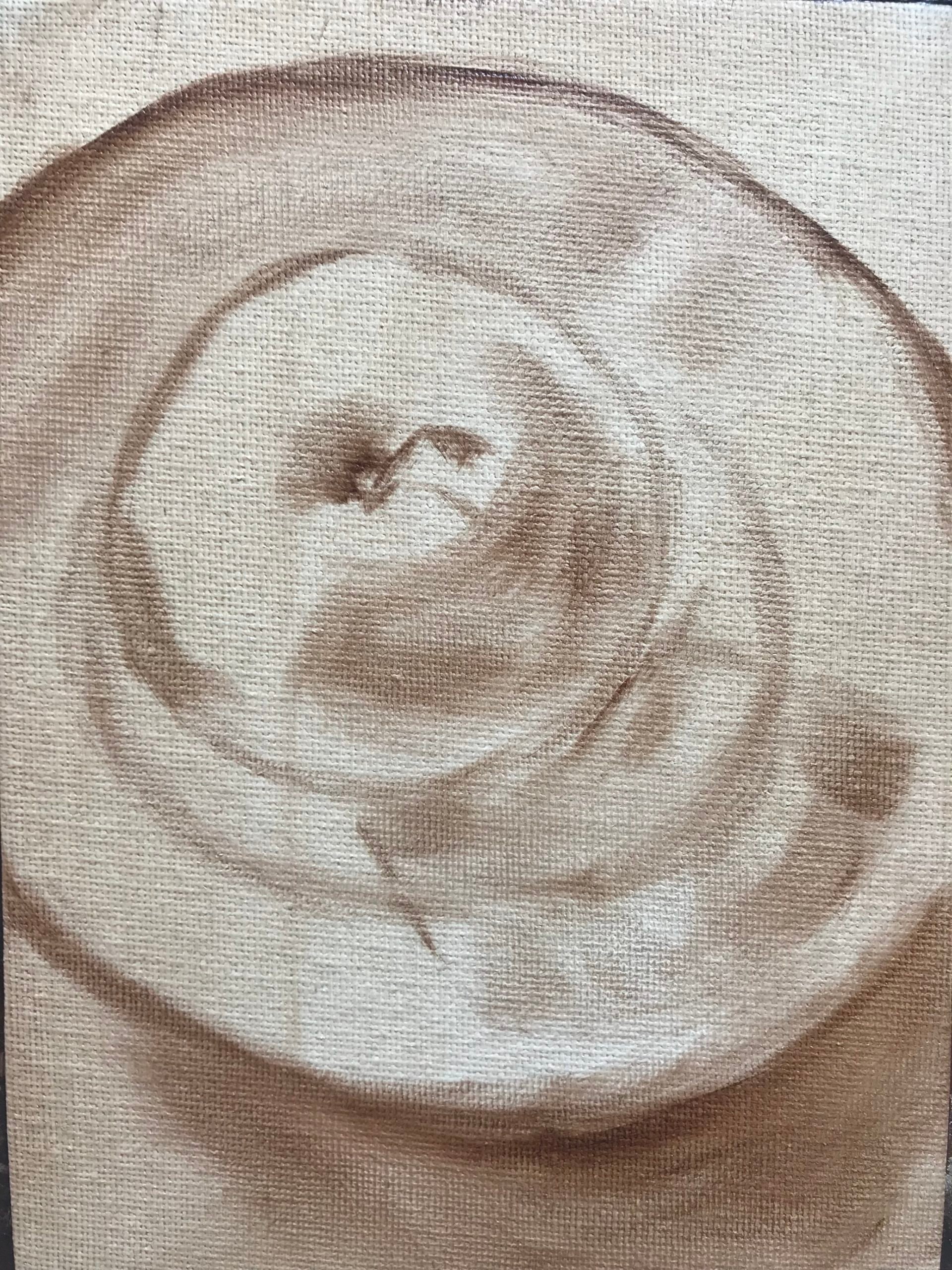 …and the final painting… 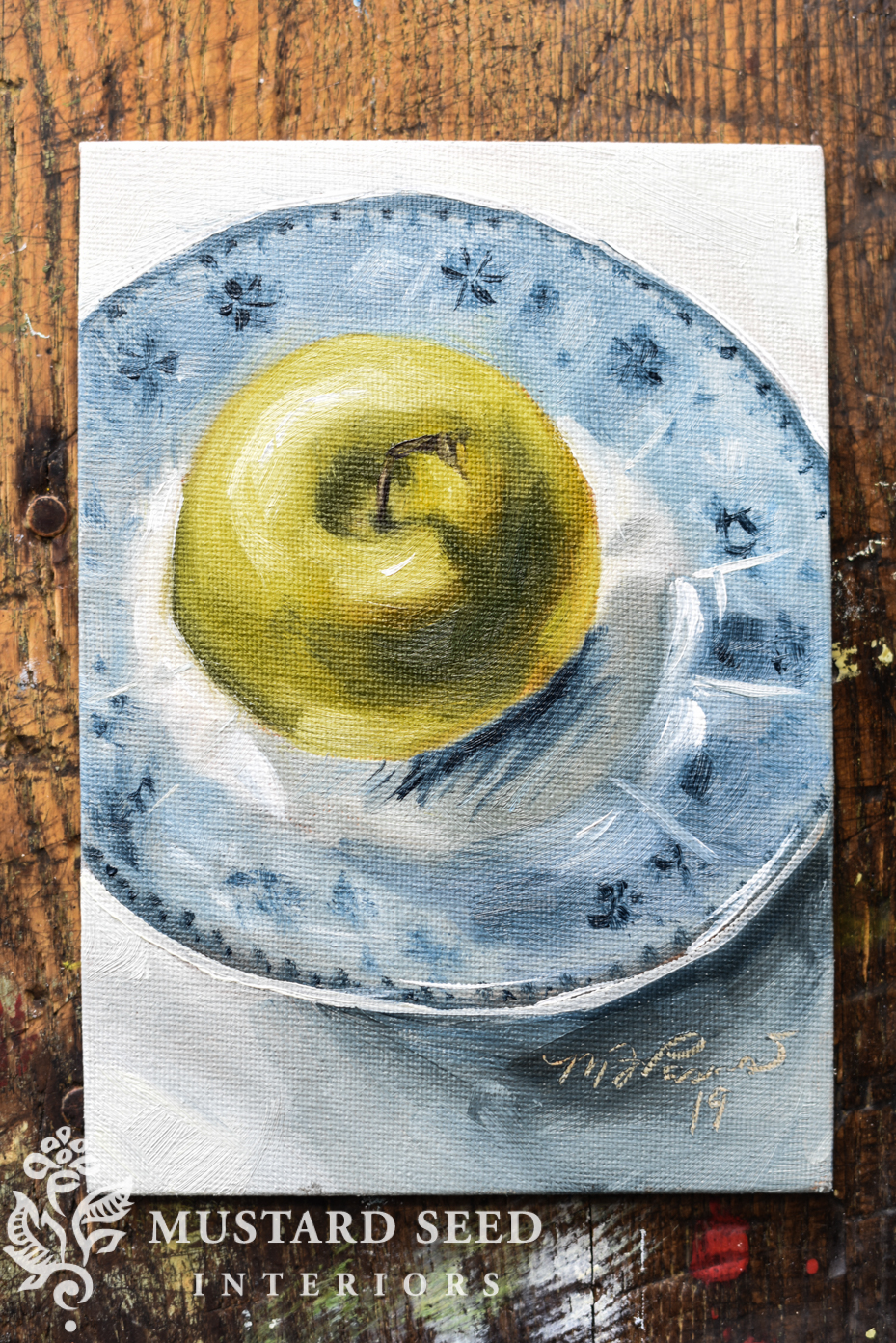 The plate ended up bing a little wonky, but I love this one, anyway!

I was enjoying painting the transferware, so I decided to try a cup and an orange.  I found some mandarin oranges with the leaves and stems just for painting!  (I’m eating them as well, but the leaves aren’t important for that!)  This is the moody composition I came up with and I was very excited about painting it… 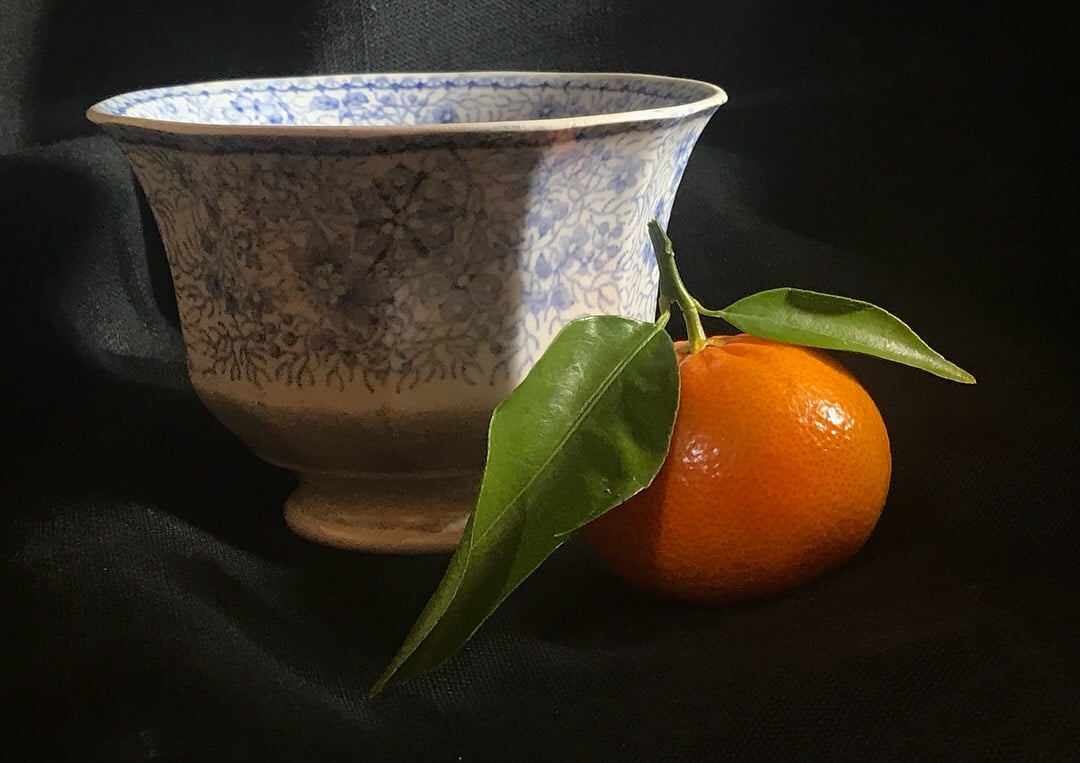 I didn’t quite capture the shadowing as much as I would’ve liked and the stem got away from me a little, but I am happy with it overall. 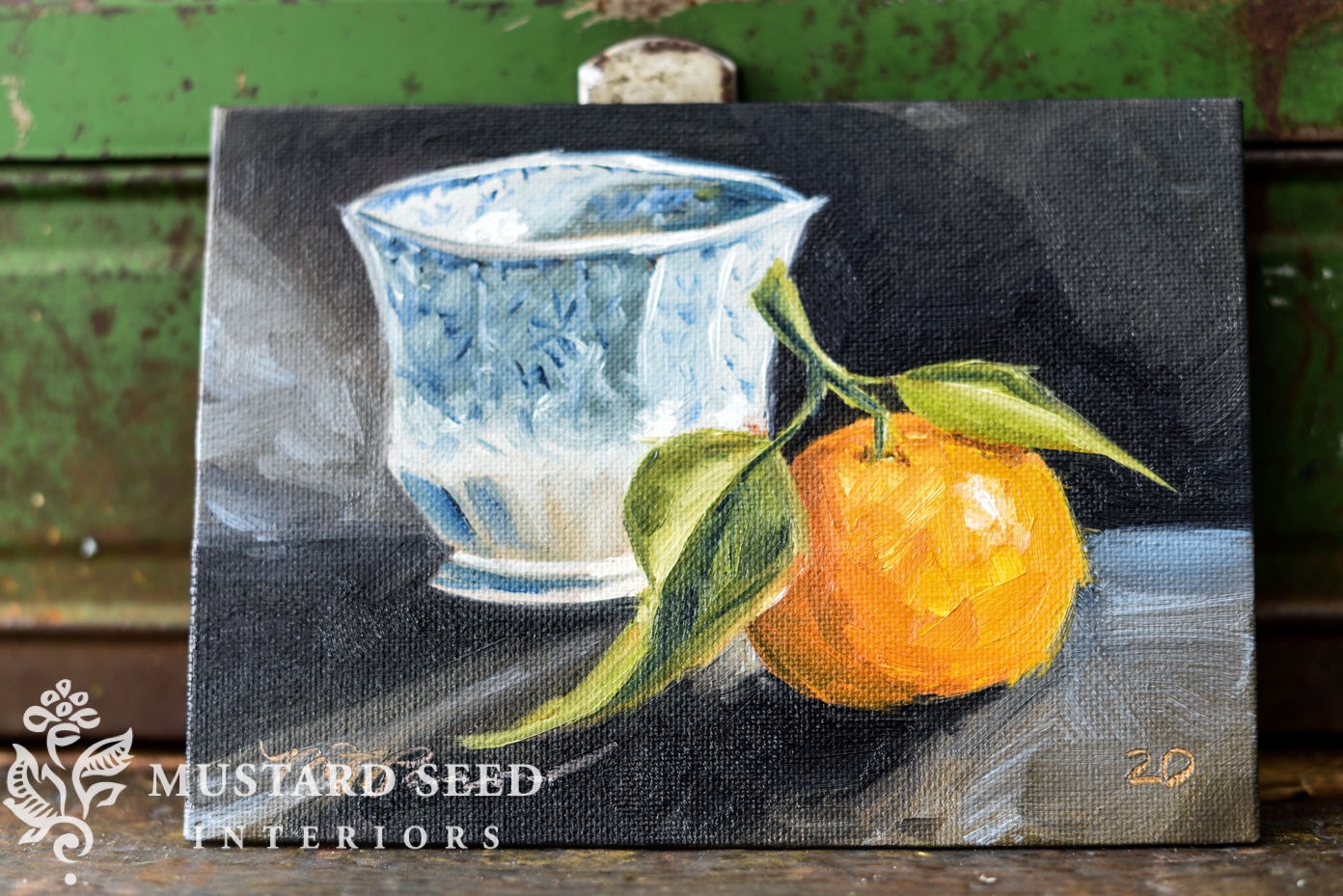 Now that I am over twenty paintings through the “exercise”, it doesn’t feel like drudgery any longer.  Quite the opposite.  I am just about bursting to go paint every day and to find new objects to capture on my easel and discover new compositions and preferences.  I do miss landscapes and I am going to sneak some of those in here and there, but I am learning so much through this series and I can see why still life painting is such an important part of studying art.

I also want to encourage you…

If you have an inkling that you’d like to pick up a brush and started your own still life painting journey, tomorrow’s post will be for you!