You know me.  I prefer to buy old things.  They just speak to me in a way that new things don’t, but it’s not always practical to buy old.  Sometimes you need a chair that people can sit in without wondering if and when it might give way.  Right?  Sometimes new things can work really well with all of the old, making your home a bit more functional.

When Kohl’s contacted me, asking if I would work with them on promoting their home department, I was honestly a little unsure.  I’ve bought towels and sheets and a frying pan there before, but I never thought of it as a place where I would buy a piece of furniture of a decorative accessory for my home.

I’ve always loved shopping at Kohl’s, though, so I decided to look around and see if I could find things that fit my style.  I also wanted to make sure I would be buying things I actually loved and would use.  I didn’t want to buy stuff just for the sake of buying stuff.

I ended up finding some really great treasures that I would never have thought could be purchased at Kohl’s.

Would you believe this sweet barrel-back French chair came from Kohl’s?  Well, it did.  I put it in the family room, replacing a vintage chair that was a bit too petite to be comfortable.  This is still an occasional chair, but it’s much more comfortable and sturdy. 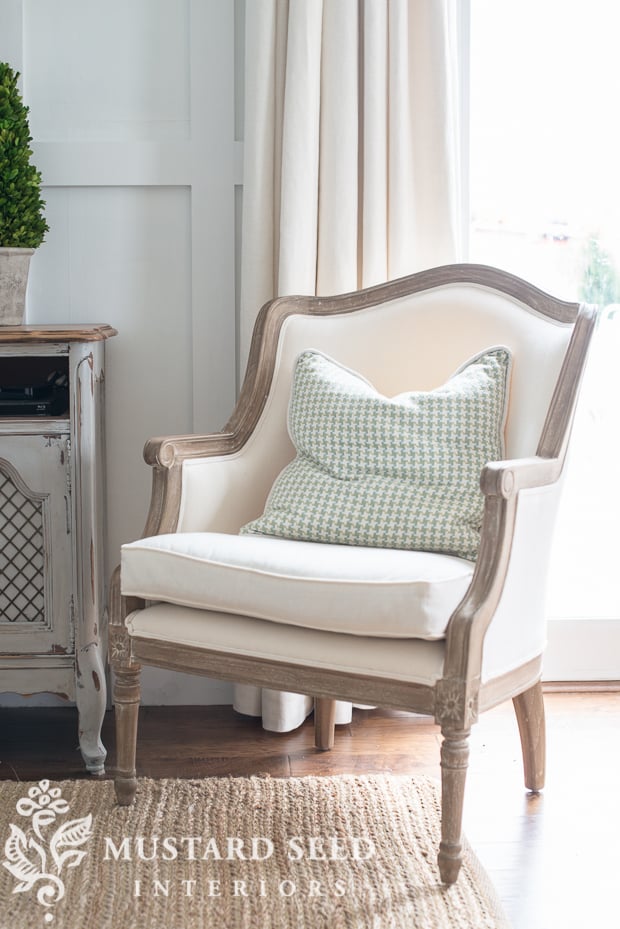 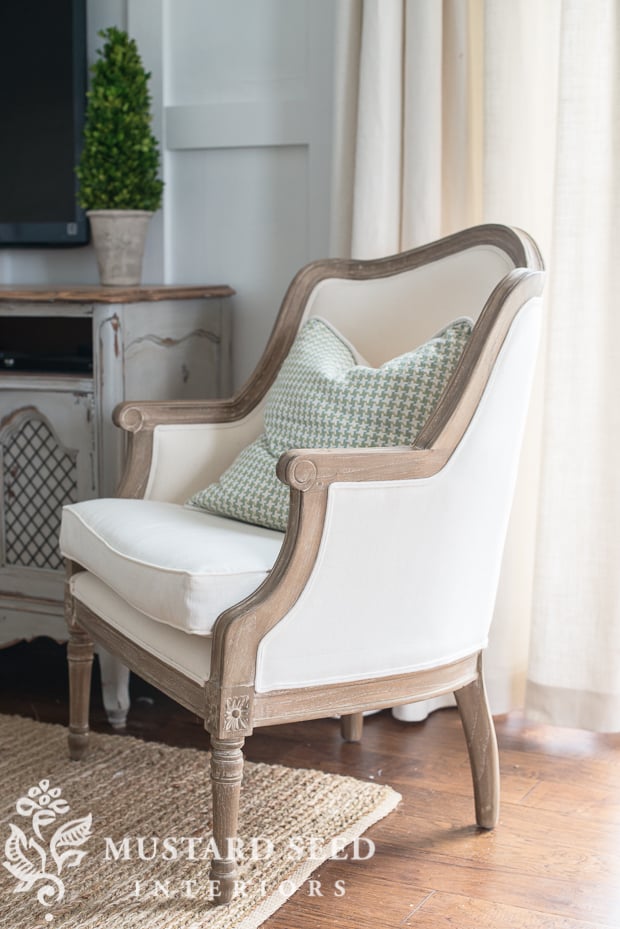 When I received the first chair they sent, this is how it came out of the box… 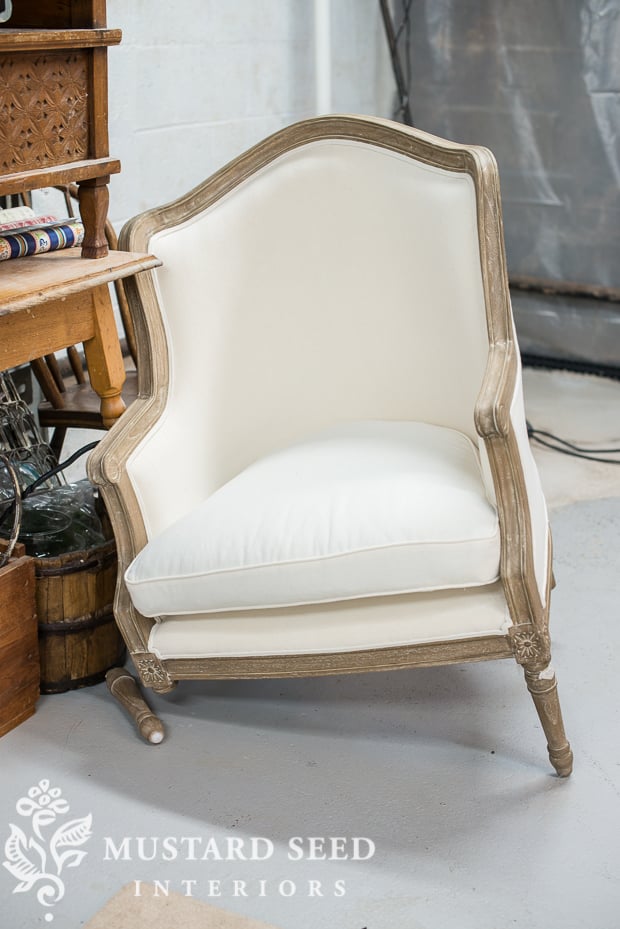 “That’s unfortunate”, as Kriste put it.  Yes, it’s unfortunate for any piece of furniture to have a broken leg before life even begins.

I called Kohl’s, expecting I would have to go through the pain of boxing it back up, scheduling a package pick-up, etc.  To my surprise, they told me to keep the broken chair and they would send out a new one right away.  It was sort of a bonus that this happened, so I was able to write about their great customer service.  That’s how it’s done.

Jeff thinks he can repair the broken leg, but we might be moving back into the territory where the leg could give out at some point and you just hope you’re not the one sitting on it when it does. 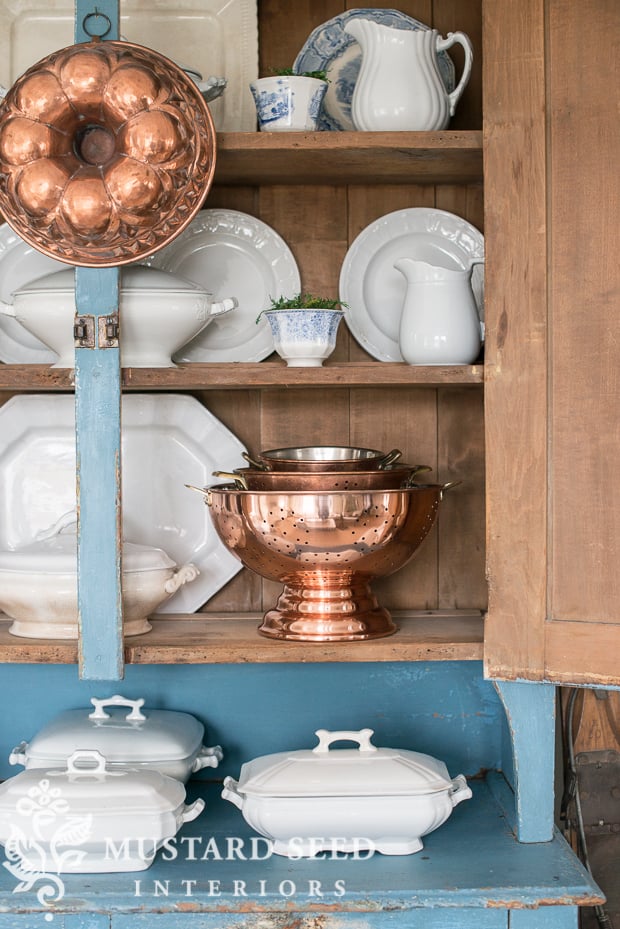 I also bought a beautiful copper colander.  I have quite of a bit of copper hanging from the pot rack in my kitchen and I already had a mid-sized and small colander and this large one works with them perfectly.  (The two nesting inside are ones I already owned.) 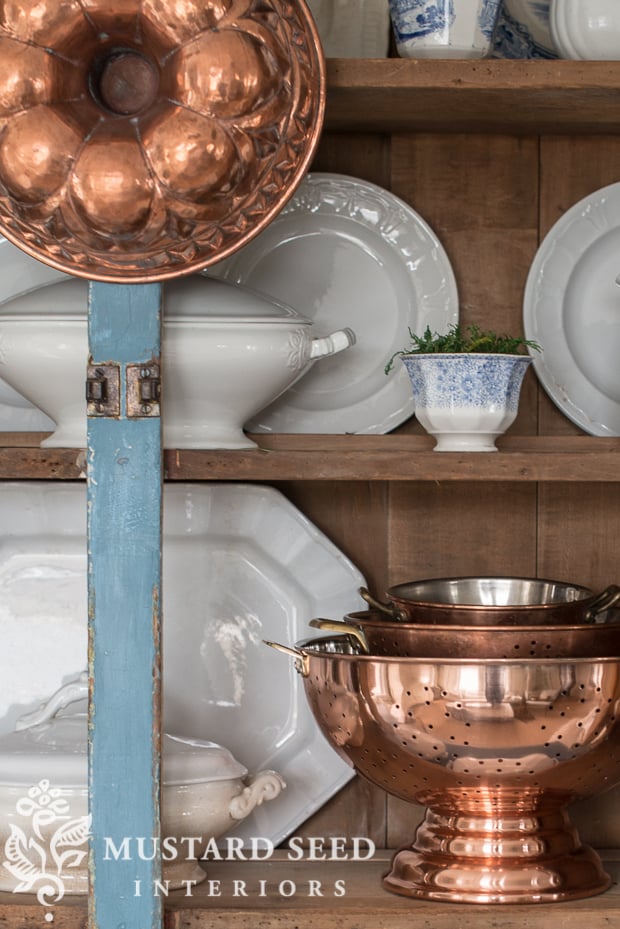 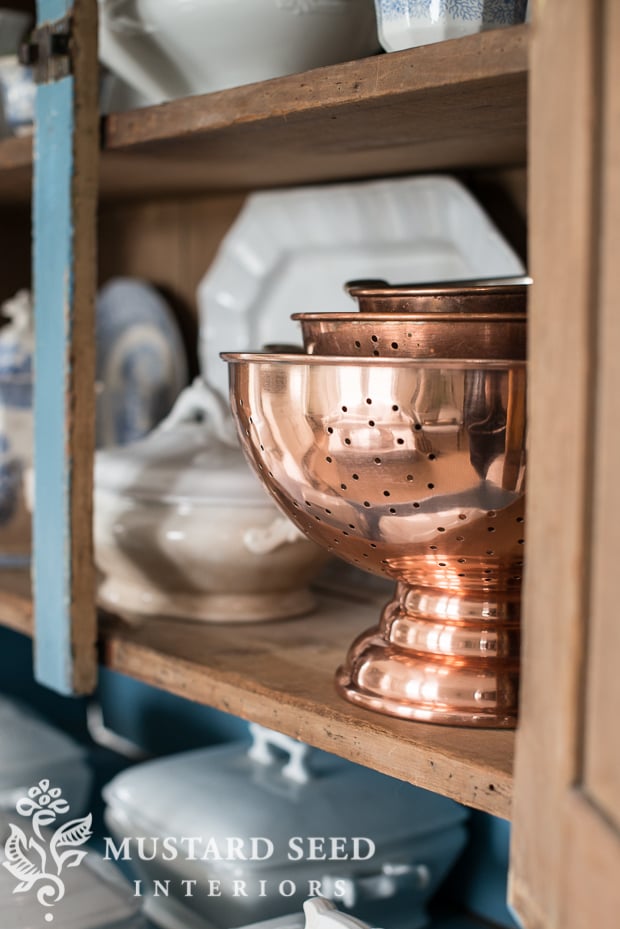 It looks gorgeous hanging from my pot rack now. 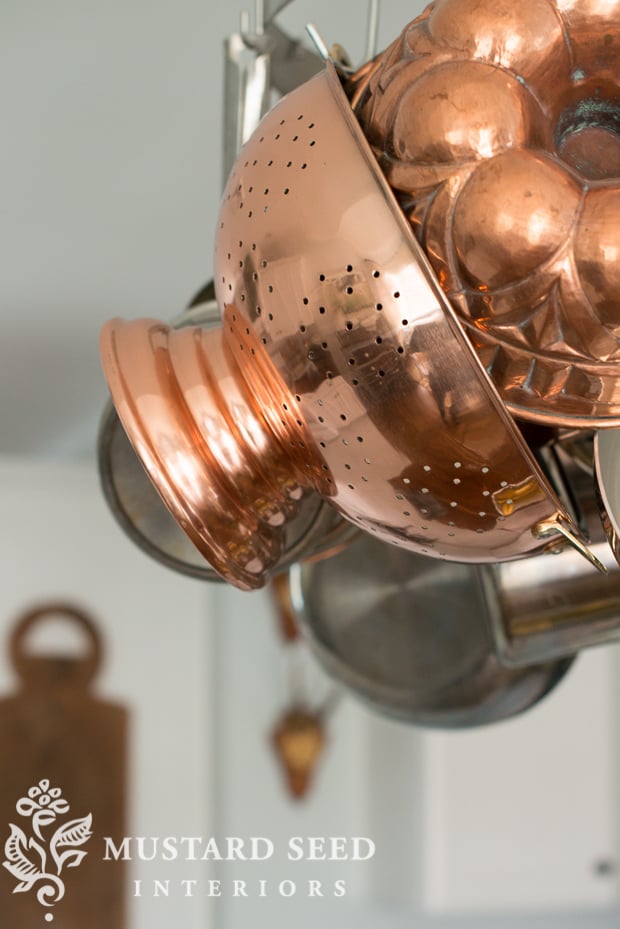 I also picked up more SimpleVera towels for our bathrooms.  I had eight already, but our family of four goes through them pretty quickly in a week, so I added a few more for our bathroom and the guest bath.  It’s nice to have the same style of towel throughout the house. 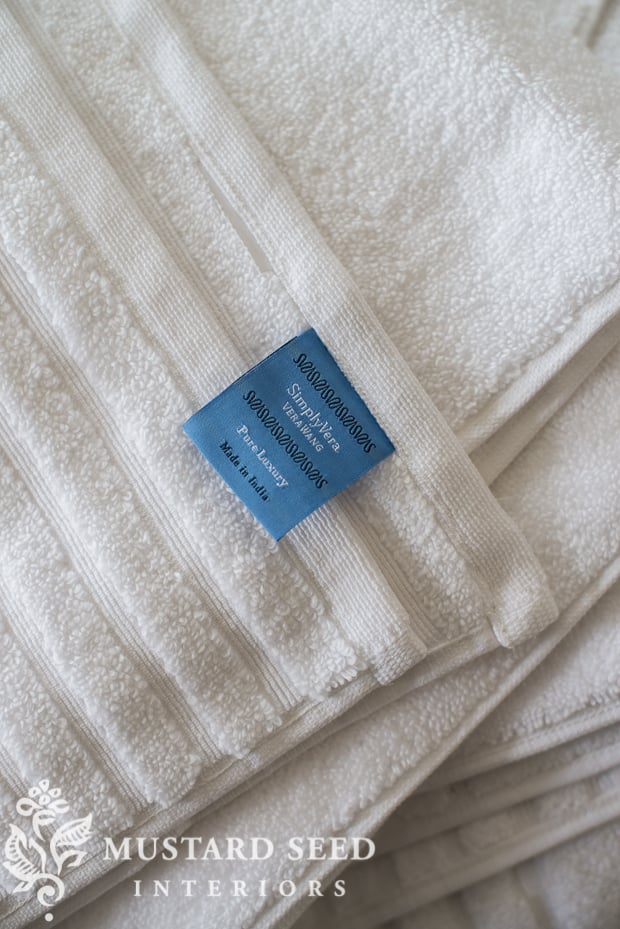 They are fluffy, absorbent, and I love the simple striping at the ends.  We don’t have large linen cupboards, so I prefer to have pretty white towels that can be stored out in the open. 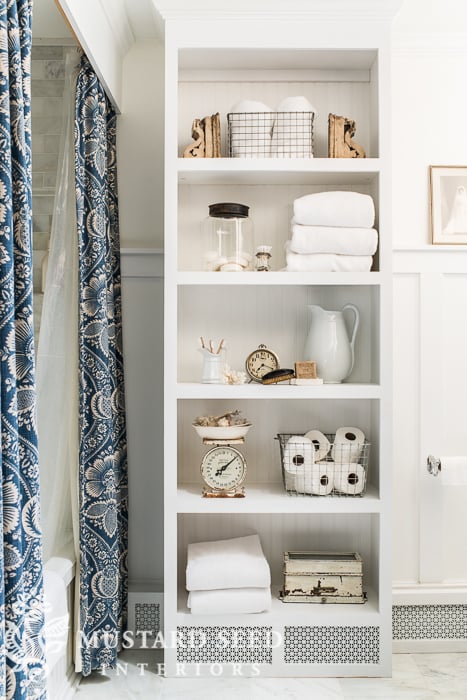 And I got a round bathmat with a pretty scalloped detail… 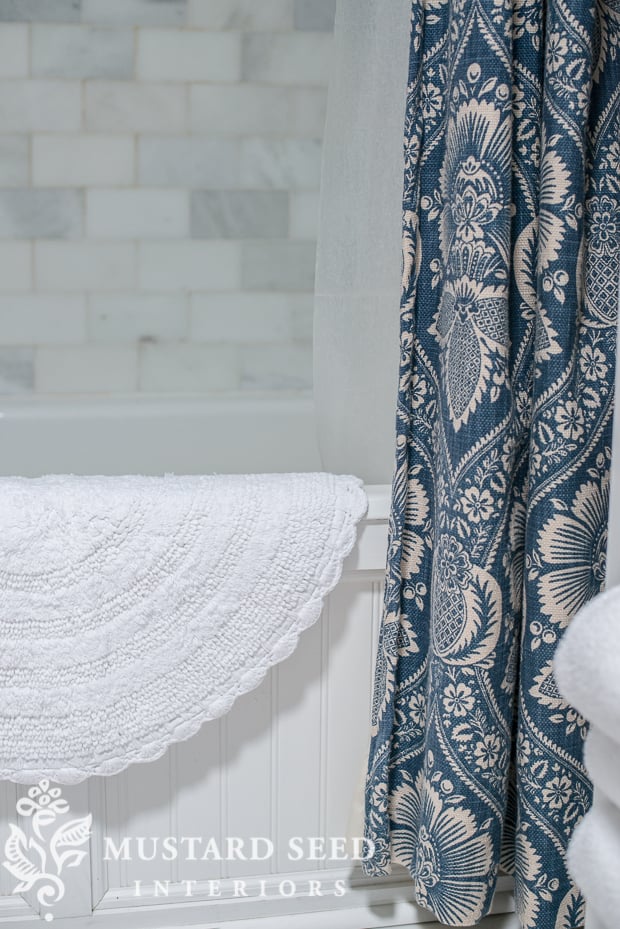 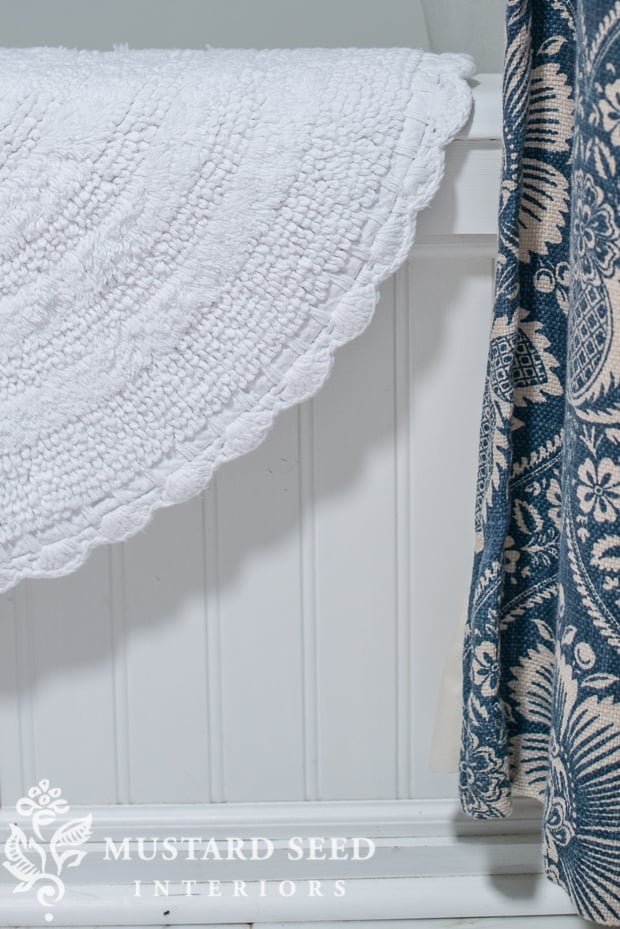 …and a new wicker wastebasket…. 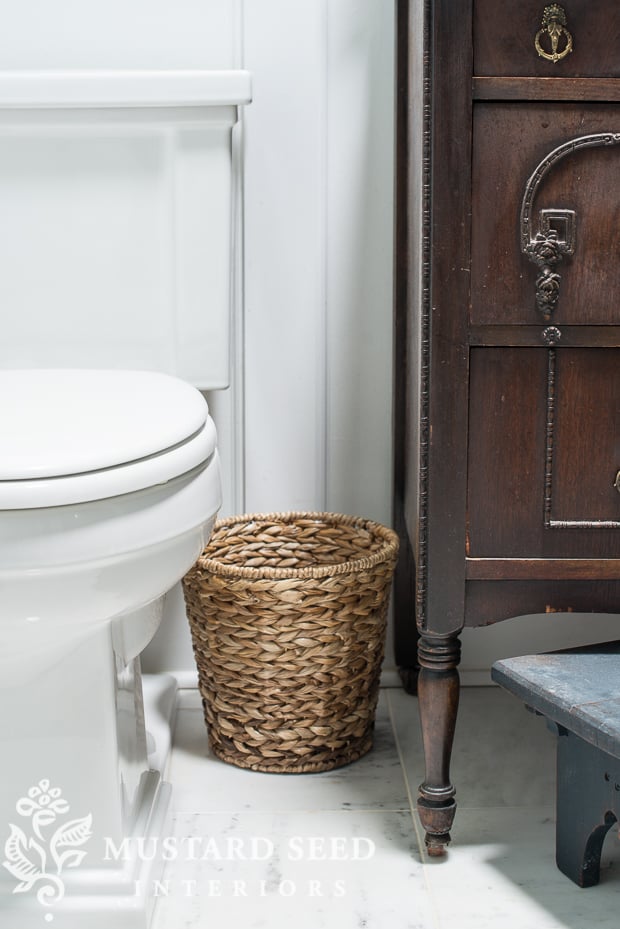 There’s a game Jeff likes to play and it’s called “how much can I stuff in that tiny bathroom trashcan before the sides split open” and our last wastebasket, picked up at a yard sale years ago, was really suffering for it.  The sides were literally splitting.

This one is tightly woven and will stand up to a pair of worn jeans being stuffed inside, followed by mis-matched socks, a large coffee cup, a banana peal and a ratty pair of tennis shoes.  Just to be fair, I don’t think he’s ever stuffed a pair of shoes inside the bathroom trash, but I think the rest is true.

To his credit, it is in the wastebasket and I suppose that’s a small victory for a man.  (Kidding!  Only kidding.  I read this to Jeff and we had a good laugh together.)

Anyway, moving on.  I bought wooden hangers for my closet.  (I shared them a few weeks ago.)  It’s a small thing, but I love how tidy it makes my closet look.  I’m now a big fan of wood hangers.  It may be my favorite purchase of the bunch. 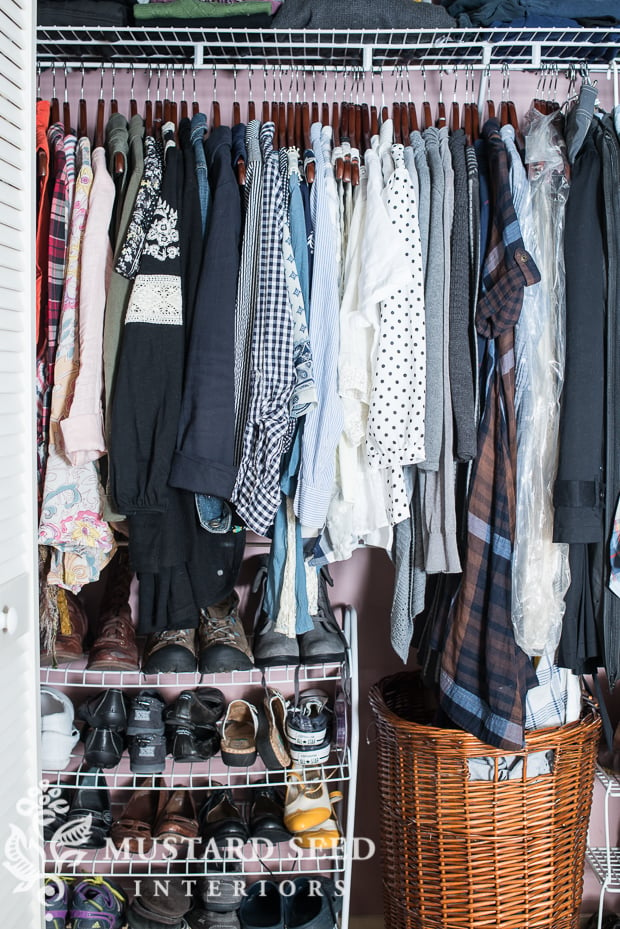 AND, because it’s Kohl’s, I received $110 in Kohl’s Cash and was able to buy a few more towels, hangers for Jeff’s side of the closet and some Chaps bedsheets (that are quite possibly the comfiest sheets I’ve ever slept in.)  The are generously sized, so the fitted sheet actually fits our deep mattress and there’s a nice allowance on both sides of the flat sheet. 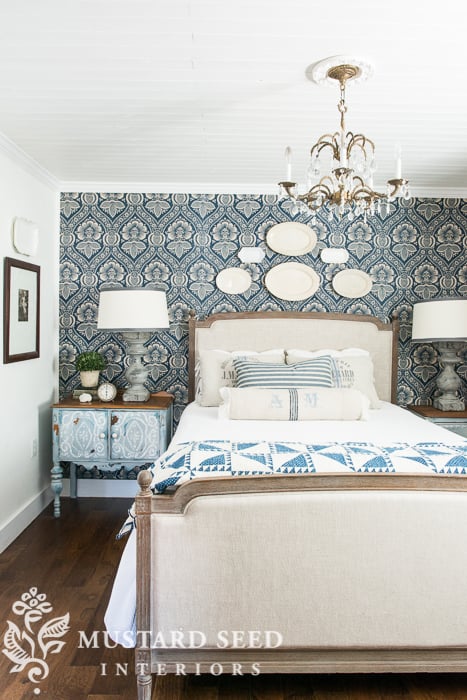 If you saw something that caught your eye and would like to do a bit of shopping, I’m giving away a $100 gift card to Kohl’s that you can use online or in their stores.

The giveaway will close Wednesday, January 27, 2016, at midnight PST.  A winner will be randomly chosen and announced shortly after.

And, to those on the east coast, stay snug in all of this snow!  We could get up to two feet in my neck of the woods.

Disclosure: This post was sponsored by Kohl’s.  They sent me a $500 gift card to spend in their home department and a $100 gift card to give away as compensation for this post.  I personally selected all of the items shared and all opinions are my own.  Especially the joke about men not putting trash in trashcans.  Kohl’s had nothing to do with that one.