Writing a book | Now I actually have to write a book…

The impossiblepossible thing had happened.  I had received a book contract from Thomas Nelson and I signed it.  (You can read about how it happened HERE.)  It was now my job to produce 35,000 encouraging words and over 250 inspiring photographs in 10 chapters.  And I only had about 3 months to do it.  AND I’ve never written a book before.  Oh crap.  Lots of deep breaths and tears and prayers and pep talks came after that realization.  I kept bringing myself back to taking one page, one photograph, one chapter, one idea at a time.  I also kept reminding myself that the people at Thomas Nelson are good at what they do and they had confidence in me.  I can do this.

The first thing we did was put together an outline for the book.  I sent along my initial ideas and then went back and forth with my editor until we were both happy with it.  Having an outline helped me relax a bit.  Now I had to flesh it out.

My room is the only room in the house with a door that locks (we have old 1940’s doors with skeleton keyholes.)  So, I locked myself away, sat on my bed with my computer on my lap and stared at a blank screen.  **I should insert here that I thought manuscripts were written in some fancy software that only writers use.  It turns out that fancy, exclusive writer’s software is MS Word.**  So, in MS Word, I would write a paragraph and then delete it all.  I’d get about a page done and be happy with it for about 2 hours and then by the 3rd hour I thought it was terrible.  Did Thomas Nelson want me to write in a more formal style?  Could I write in the conversational style I’m comfortable with and use for my blog?  Would they take one look at my grammar and realize they made a mistake?  How does one simply start writing a book, anyway?  Maybe I should Google it…  I finally sent an e-mail to my editor to get a bit more direction.  She encouraged me to just write.  So I did.  I wrote and I didn’t edit myself and I just told the story I wanted to tell.  Honestly, I just pretended like I was writing a blog post.  It was tough, but there’s no way I could get feedback if I don’t turn anything in.

I turned in chapter one, knowing it was very far from perfect, actually the chapter one in the final book is almost nothing like the chapter one I originally turned in.  It got the process going and there is a lot of value in that.  I received some pretty good feedback and, at the time, they didn’t ask me to totally rewrite the whole thing.  Victory!  I CAN DO THIS!

A few days later, I turned in chapter two.  When I got it back, I had never seen so much red on a piece of paper.  My first reaction was to get all offended, but I quickly realized that a page full of red is one of the best things I could see.  What I wrote wasn’t working and if my editor was worried about making me cry, my book wouldn’t be the best it could be.  I also had to remind myself that I have never done this before.  I needed all of the input and edits I could get.  Bring on those paragraph marks, comma splice corrections and red curly-cue things that never meant anything to me on my English term papers.

At one point, my editor sent this quote to me…

“You write to communicate to the hearts and minds of others what’s burning inside you. And we edit to let the fire show through the smoke.” –Arthur Polotnik

I turned in all ten chapters in a few weeks and, I must admit, I struggled through some of it.  With the exception of a few edits, I was done with the writing and started to work on the photography.  A few weeks later, though, I received the e-mail that I feared from the beginning.  My team got some additional feedback from around Thomas Nelson and they wanted some changes.  A lot of changes.  Like, almost-rewriting-the-entire-book-kind-of-changes.  I’m pretty sure I slipped away to the basement to paint a piece of furniture and think it through.

Had I felt 100% confident about everything I wrote, I would’ve been devastated.  But, they had picked out some of my favorite parts of the book, some of the parts where I was most “me” and said, “We want more of this.”  Instead of being a bad thing, this was a great thing.  It did mean I would have to go back into my writing studio (aka my bed, but writing studio sounds fancier) and live in sweatpants for a few more weeks, but it was still a great thing.  As I worked on rewriting the book, I felt free and I was having more fun with it and it definitely shows in the final draft.

Photographing a Book (AKA – Can you turn that pear stem 180 degrees to the left?)

Speaking of the book, several people have commented on this round ottoman in my living room and asked where I got it.  I actually made it from scratch and there is a tutorial on making it in my book! 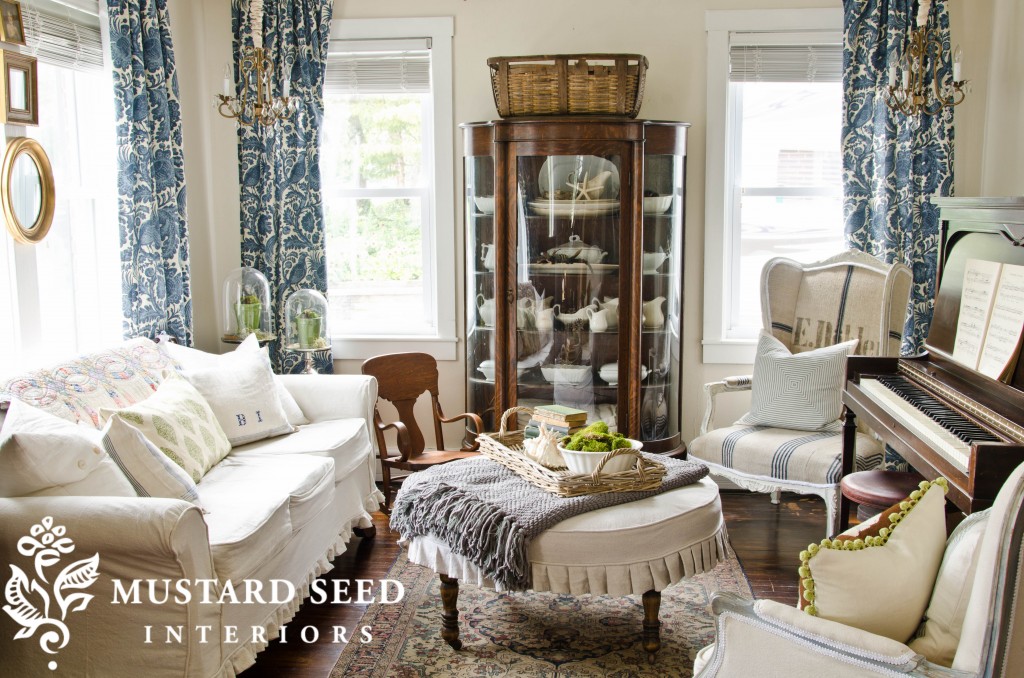 It looks complicated, but it’s an easy project and it costs so much less than one from a store.