writing a book | how it happened

Despite the fact that I just wrote a book I feel like I’m totally the wrong person to give advice to an aspiring author on how to get published.  I thought it might be helpful, though, or at least interesting, for me to share my experience and the process.  So, here we go…

I’ve shared before that I’ve never thought of myself as a writer.  I was never good in English at school, disliked writing papers immensely and have always been lousy at spelling and grammar.  I have always thought it would be fun to put together a decorating book, but that thought was the kind of thought you have like – it would be so fun to own a horse farm or it would be fun to live in Paris.  It’s something you talk about and think about, but it’s something other people do.  Not you.

I started to think it might be possible once I started writing for HGTV.com.  One of their editors sent me an e-mail out of the blue asking if I would write three tutorials for them.  She liked the tutorials on my blog and gave me the chance to try things out as a freelance writer.  They liked my work and offered more work.   Success in that job turned the little thought that was easily dismissed before into something I started to dream about with the hope that it might happen some day.

As I dreamed about writing a book, ideas began to flow at a rapid rate and the idea of what my book would be started to take shape.  I envisioned a book about my style with tutorials, tips and stories laced throughout.  I decided to start writing it before I burst or the ideas were lost.  So I started. 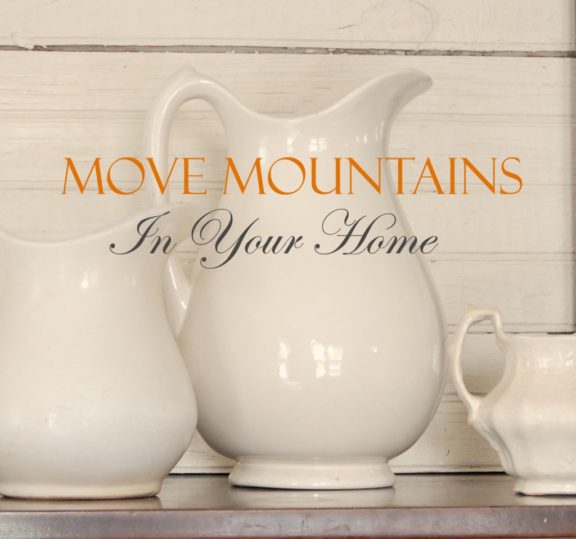 It was easy at first, but then I got bogged down in the layout of the book.  I was trying to put together an e-book or one that would be self-published, because the idea of a publisher being interested in hiring me as an author was very far-fetched in my mind.  I didn’t have any connections with a publisher and I had no clue even how to submit a manuscript.  The e-book stalled.  It just didn’t feel right.  I felt strongly like I just needed to keep working on my blog, my freelance writing, my retail space and just let things happen naturally.  If I never wrote a book?  Fine.  I didn’t want to miss the opportunities at my feet because I’m too busy trampling over them to get to the next thing.

In April of 2011, I walked in the house after a day of shopping with my mother-in-law.  My business phone voice mail light was blinking.  I picked up the phone and dialed to check the message.  I was sort of half listening as the conversations of my family were buzzing around me.  I had to play the message a second time, because I didn’t catch much.  The second time, I caught the word publisher and immediately clapped my hand over my mouth.  I rushed through the room to grab a piece of paper and pen and replayed the message a third time. By this point I was bubbling with excitement and could hardly hold myself still.  I wrote down, “Thomas Nelson…publisher…interested in book idea…”  I hung up the phone, gathered myself and turned to my husband and father-in-law.  (I think my mother-in-law had been summoned to play superheros with the boys during this time.)

I beamed at the two of them and tried to speak in a voice that wasn’t abnormally high-pitched and school-girlish.  “I just got a voice mail from a publisher who is interested in me writing a book for them!!!”  All composure was lost.

The guys then informed me how big time Thomas Nelson was.  I returned their call immediately and had to settle for leaving a voice mail.  I didn’t hear back until a couple of days later, which was torture, but an excellent exercise in patience and trusting God’s timing.  I finally received the call (or perhaps we scheduled one) and we started to discuss my ideas.  That turned into a conference call to discuss my ideas and their ideas.  That turned into the discussion of details and proposals and blog statistics and demographics.  It’s not enough if I have an idea and a few people at a publishing company who like the idea.  It has to be proved that the idea can be turned into a book that will sell.  This process took about six months.

I didn’t do a lot during that time except wait, answer questions and provide information.  Well, I did a lot, but not related to the book.  I just focused on my blog, freelance and retail work.  In August 2011, I wrote a post about losing & finding myself.  It had nothing to do with the possible book.  I just wanted to share what was on my heart and the response was overwhelming.  I don’t know how many followers I had at the time, but over 250 comments on a post without any pictures or tips or a makeover was a big deal.  And it wasn’t just the volume of comments, but how heartfelt they were.  Without meaning to, I had touched a nerve.  The people at Thomas Nelson noticed.  This post…this was the book I needed to write.  It was your comments that made it clear.

The idea was refined and pitched again.  The details were ironed out about the photography…I was going to be the photographer (gulp!!)  The idea was accepted and in November of 2011, I received an offer from Thomas Nelson to write (and photograph) my first book.  I was over-the-moon excited about it, but a knot was slowly growing in my stomach.  What if I gave my best and people didn’t like it?  Didn’t buy it?  What about the criticism that comes with putting yourself out there?  My husband took me for a car ride and I cried and poured out my fears.  We prayed about it and, after a few days, decided to not make decisions based on fear.

I took a leap of faith and signed the contract.

Speaking of the book, I have some book signings/workshops coming up in November and I’m working on scheduling more.  Check out my side bar for an updated listing and I’ll be posting more details tomorrow.