(working with what you have) fall table

Last year, I participated in the Farmhouse Holiday Series and it was such a fun blog-hop to be a part of that I agreed to participate again this year.  I like saying yes to fun things and collaborations with creative people.  But then I realized that only about 2% of my house is finished in my colors and style…

And I really felt that as I was working on this fall tablescape.  It was supposed to be in the dining room, but my dining room is dark beige right now with carpeting, so I decided to shoot in my half-painted kitchen on a half-finished table with chairs that are too big and, by the way, also aren’t finished.

I was very close to bailing at the last minute, but I had to resist that urge.

The seasons change and we can still decorate for them even if everything isn’t finished, right?

So, I did what I always do.  I hit a few local shops and picked up some local produce and flowers and paired it with stuff I already had.  This was going to happen, even if the conditions weren’t exactly as I wanted them. 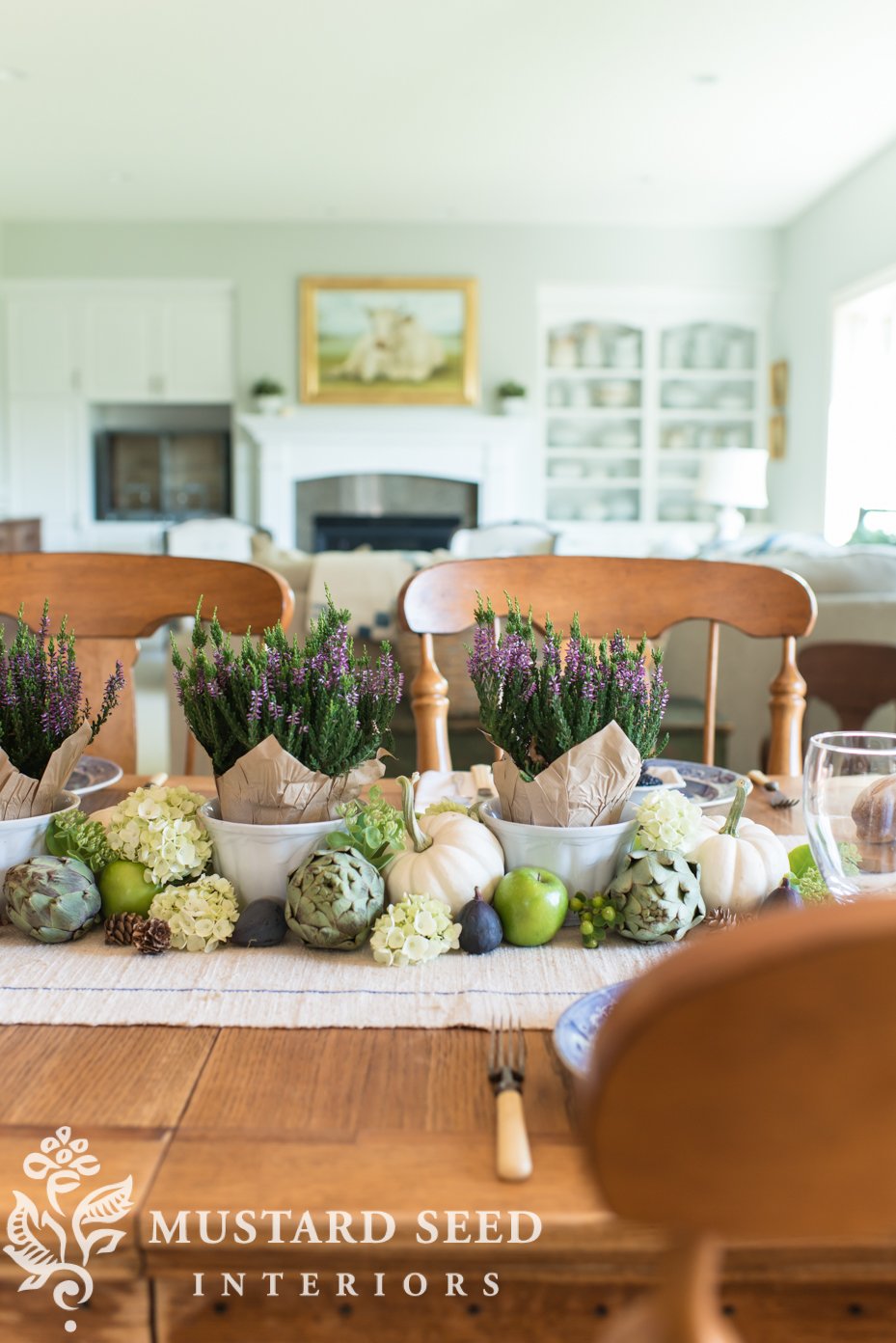 It started with the pretty fall heather.  I took a cue off of that and added some purple figs and then some artichoke and green apples. 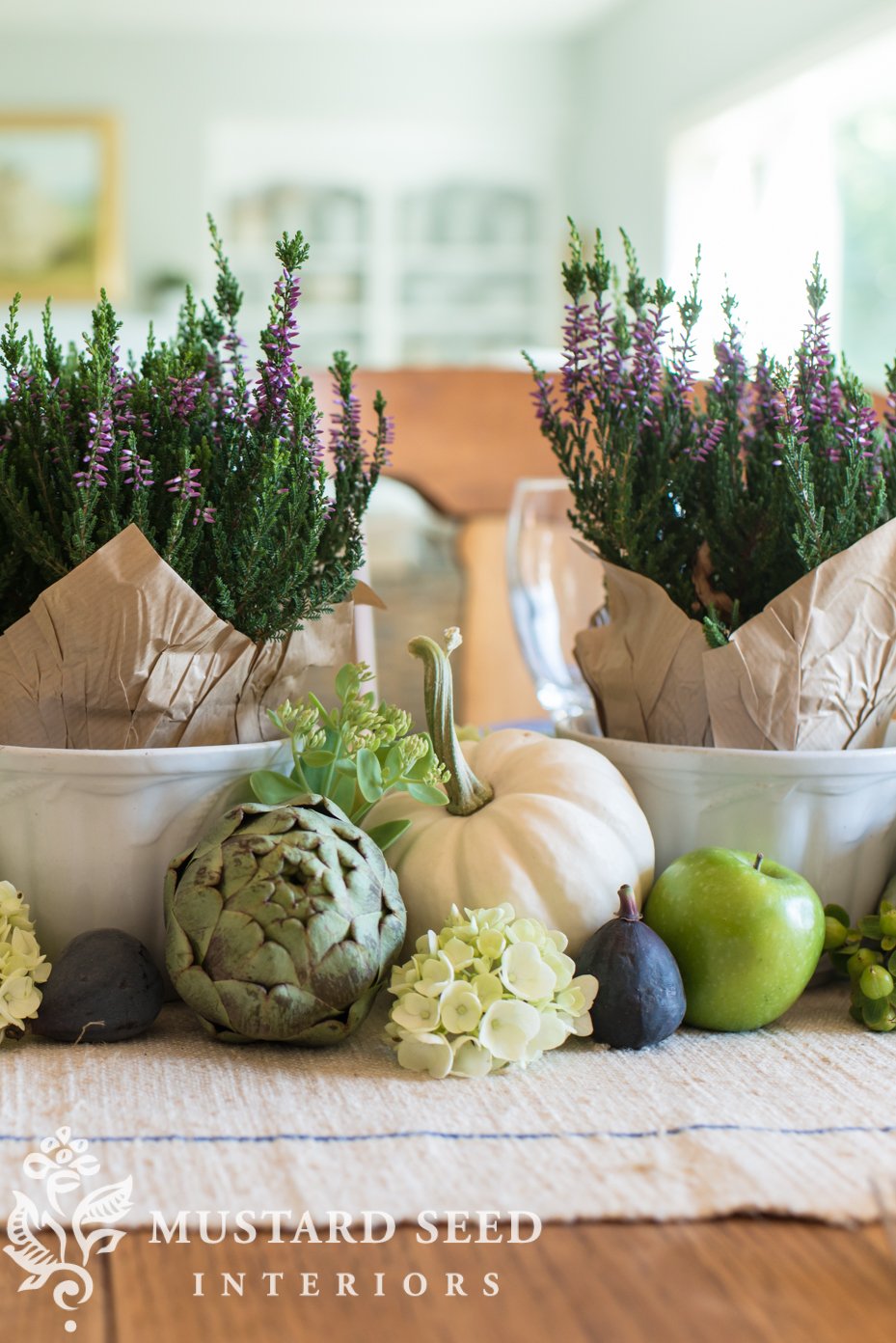 I used our everyday runner, which is a piece of a grain sack roll cut to size… 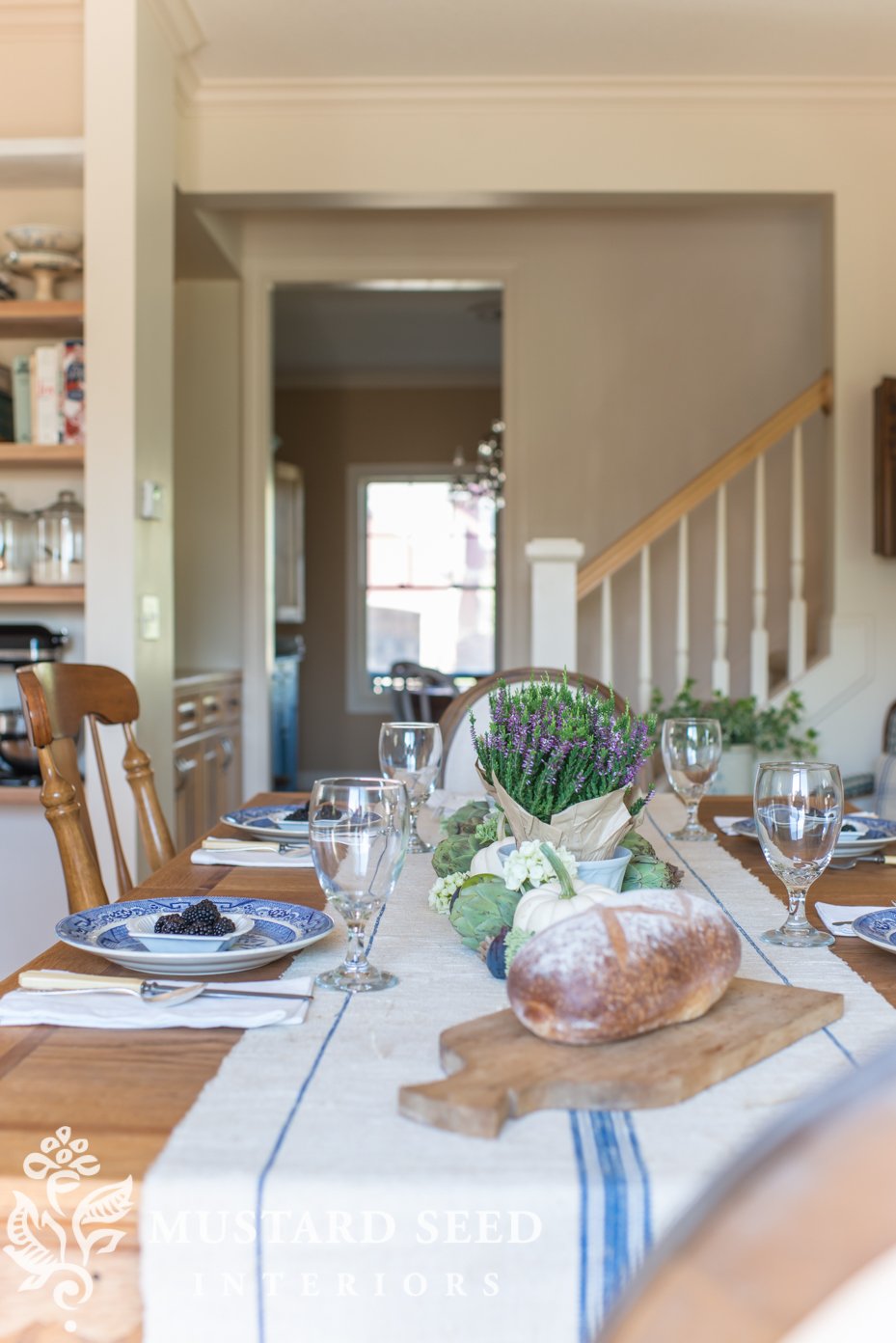 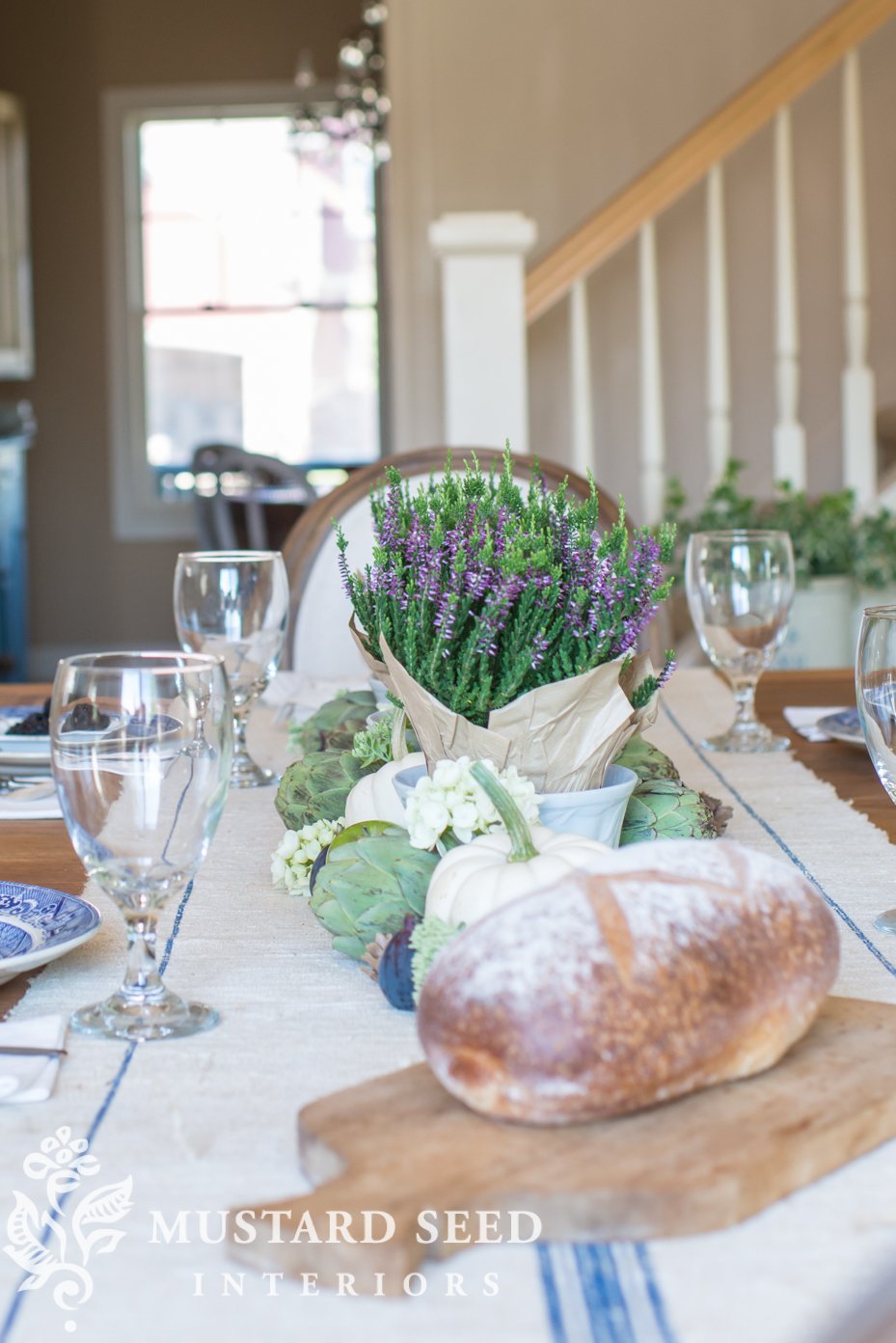 And arranged the fresh produce a few white pumpkins around the three potted heather plants. 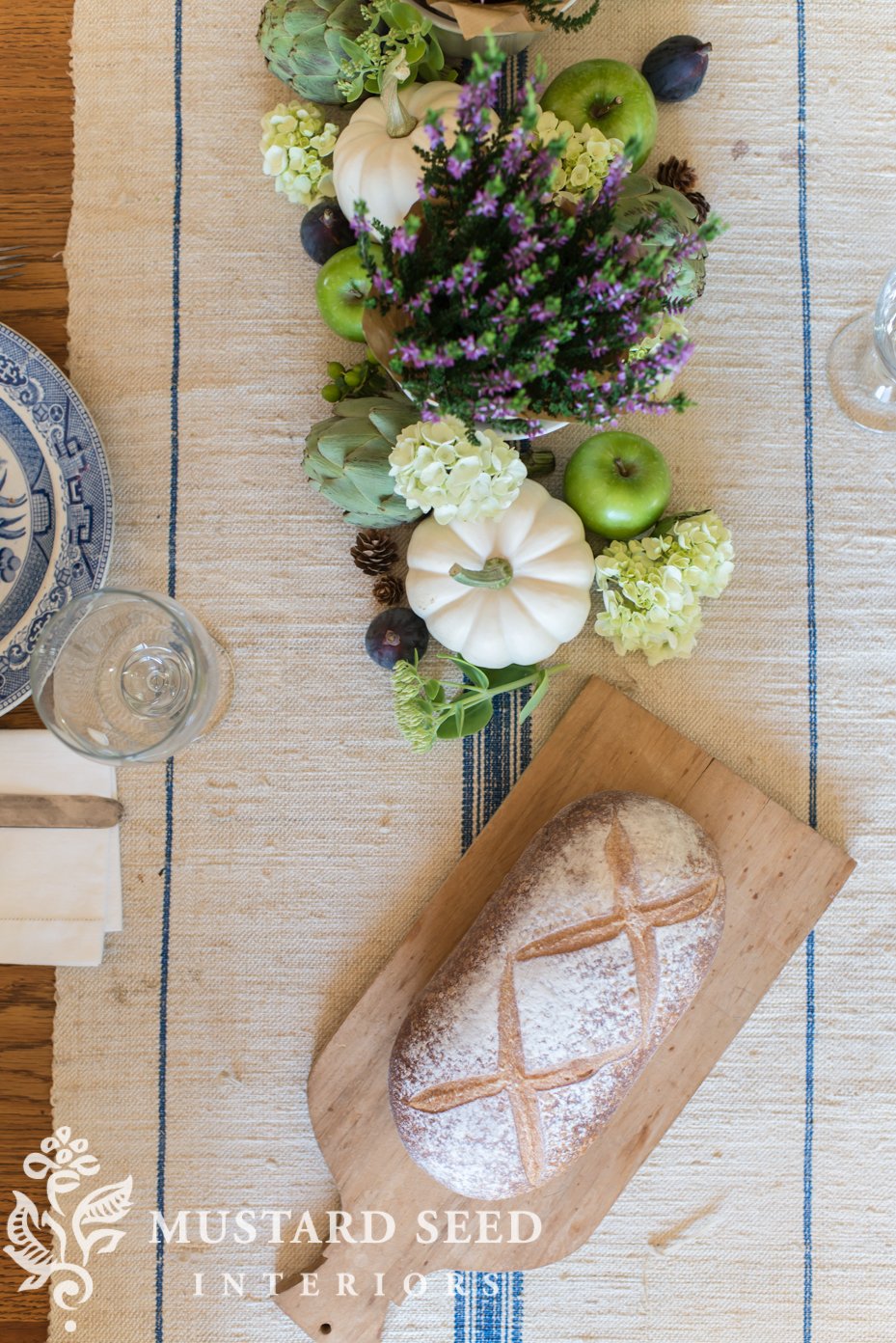 I also added in a few trimmed flowers from an old bouquet and from around my yard.  It’s all finished off with some of my favorite antique plates and flatware. 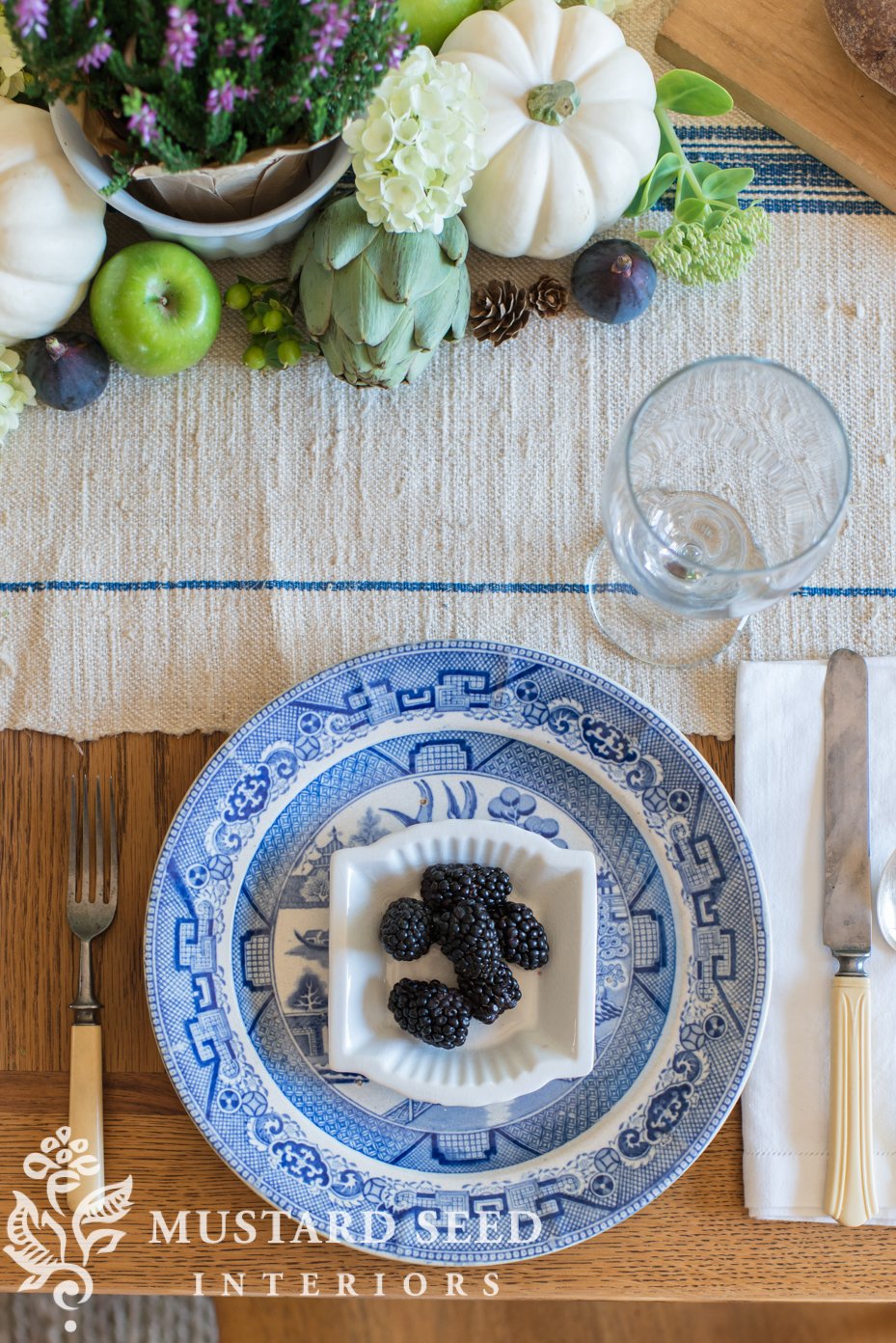 My son loves blackberries, so I bought them for him, but realized they worked well for my shoot.  I had to tell him to keep his fingers off until I was done with the pictures!  The nice thing about decorating with produce is most of it gets eaten.  Better than storing in in plastic tubs 11 months of the year! 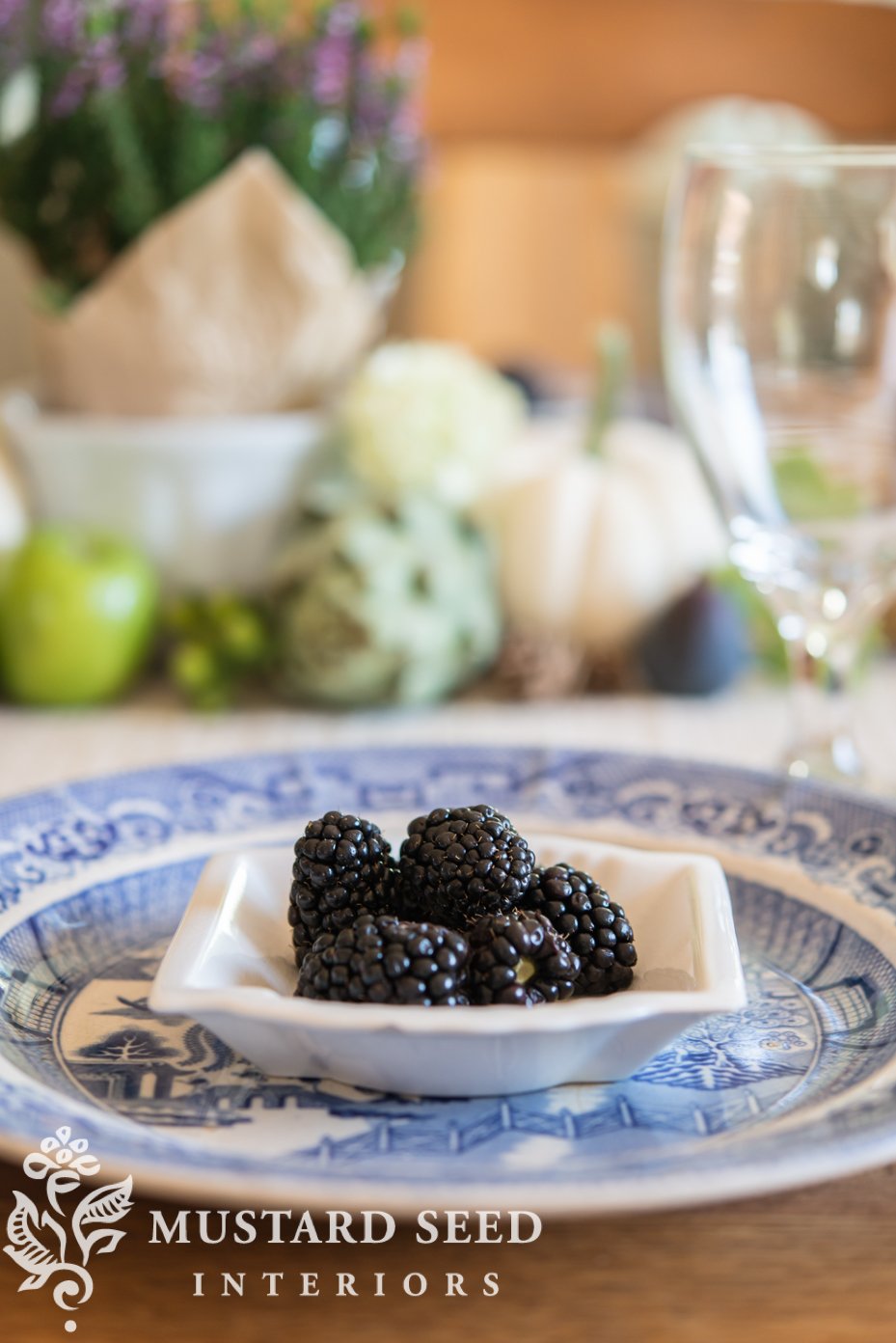 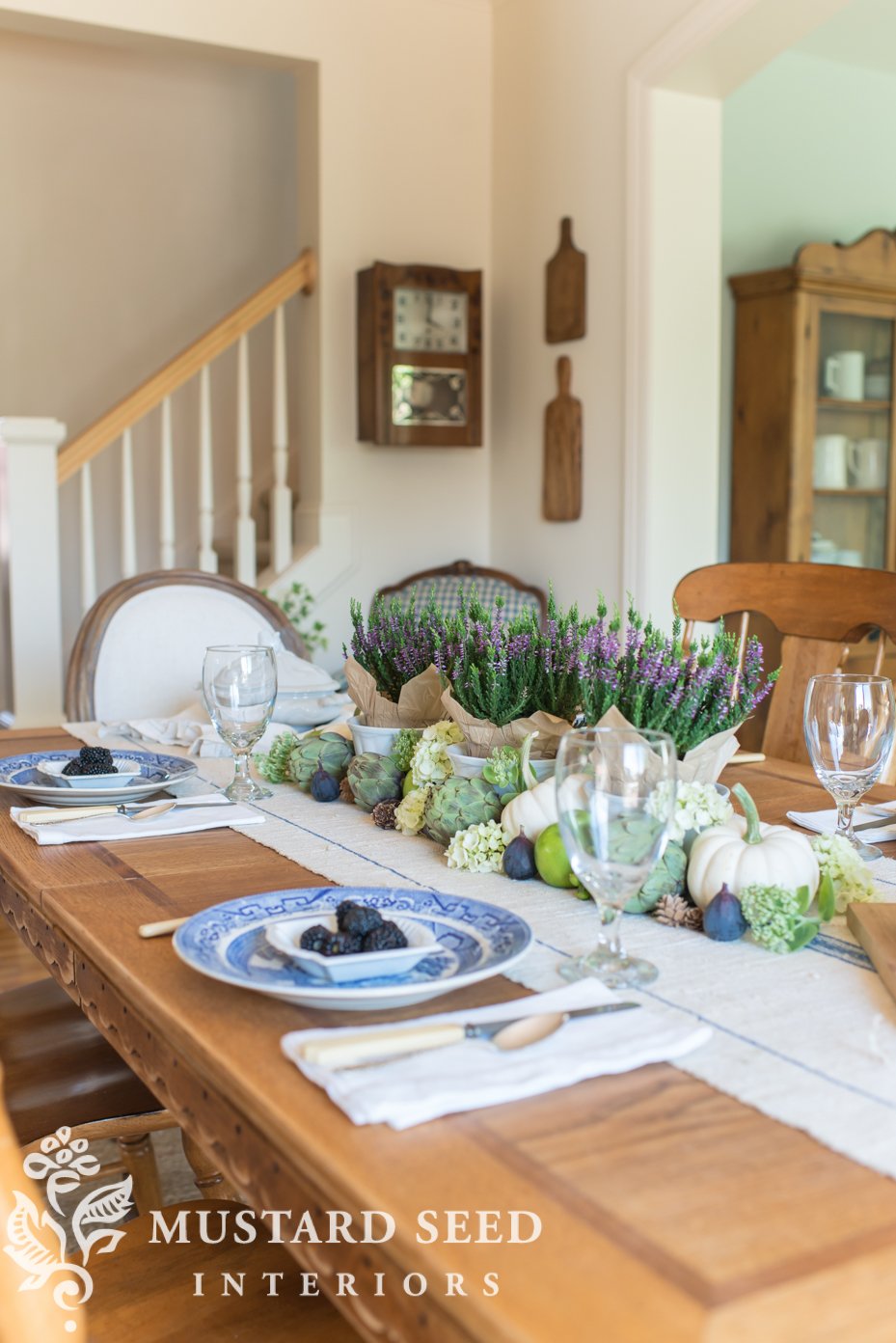 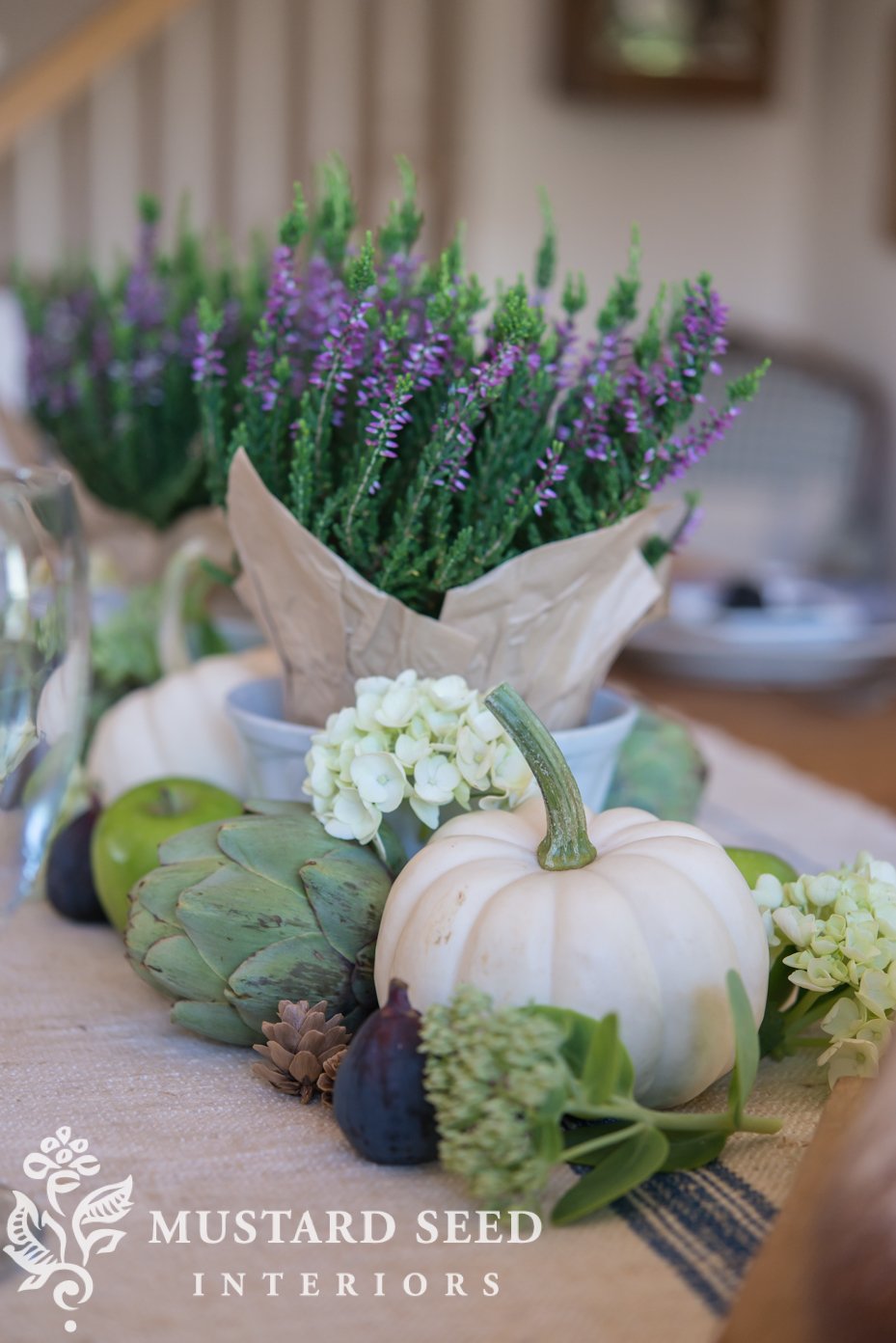 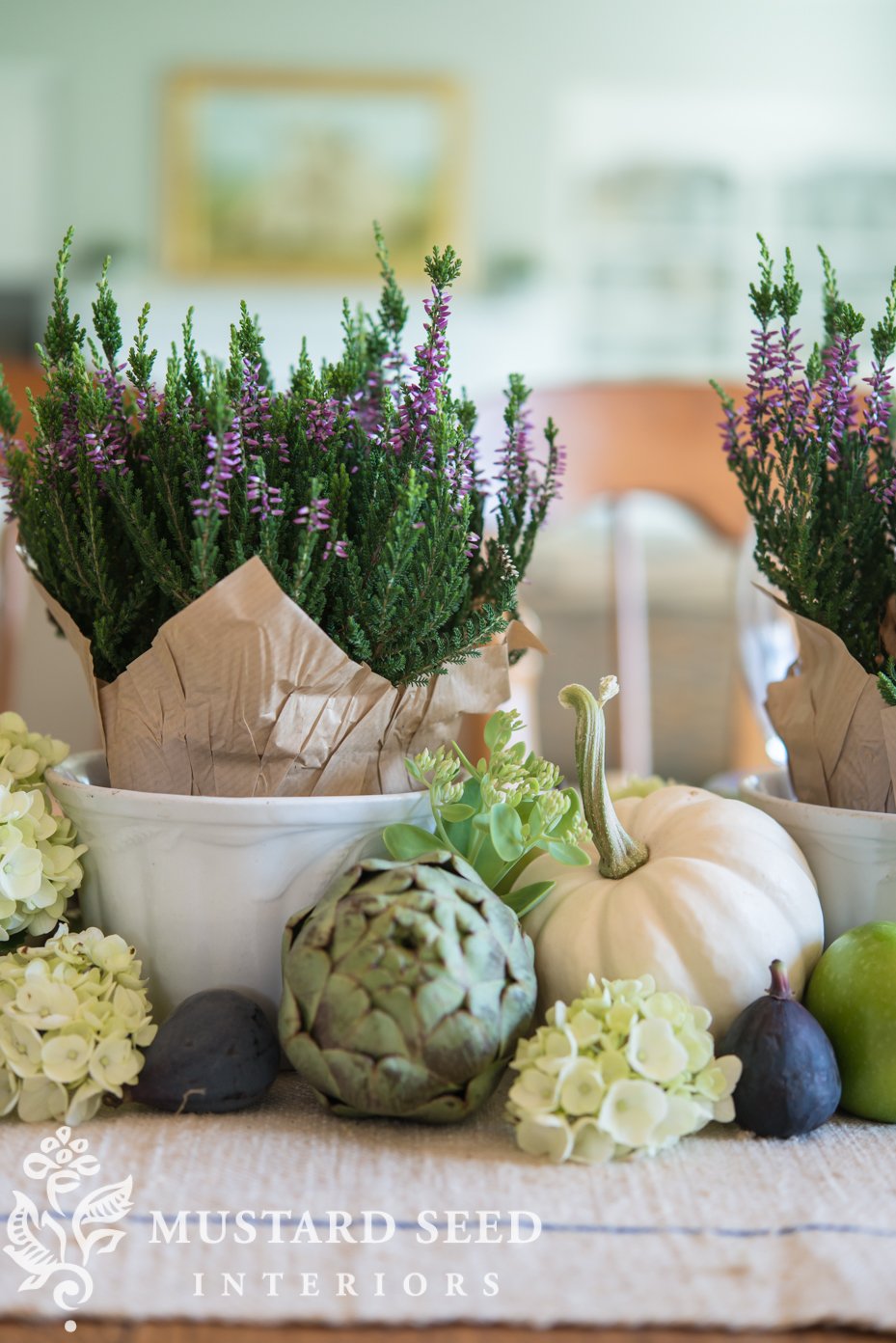 And with produce that pretty, you can forgive that only 1/4 of the kitchen cabinets are painted! 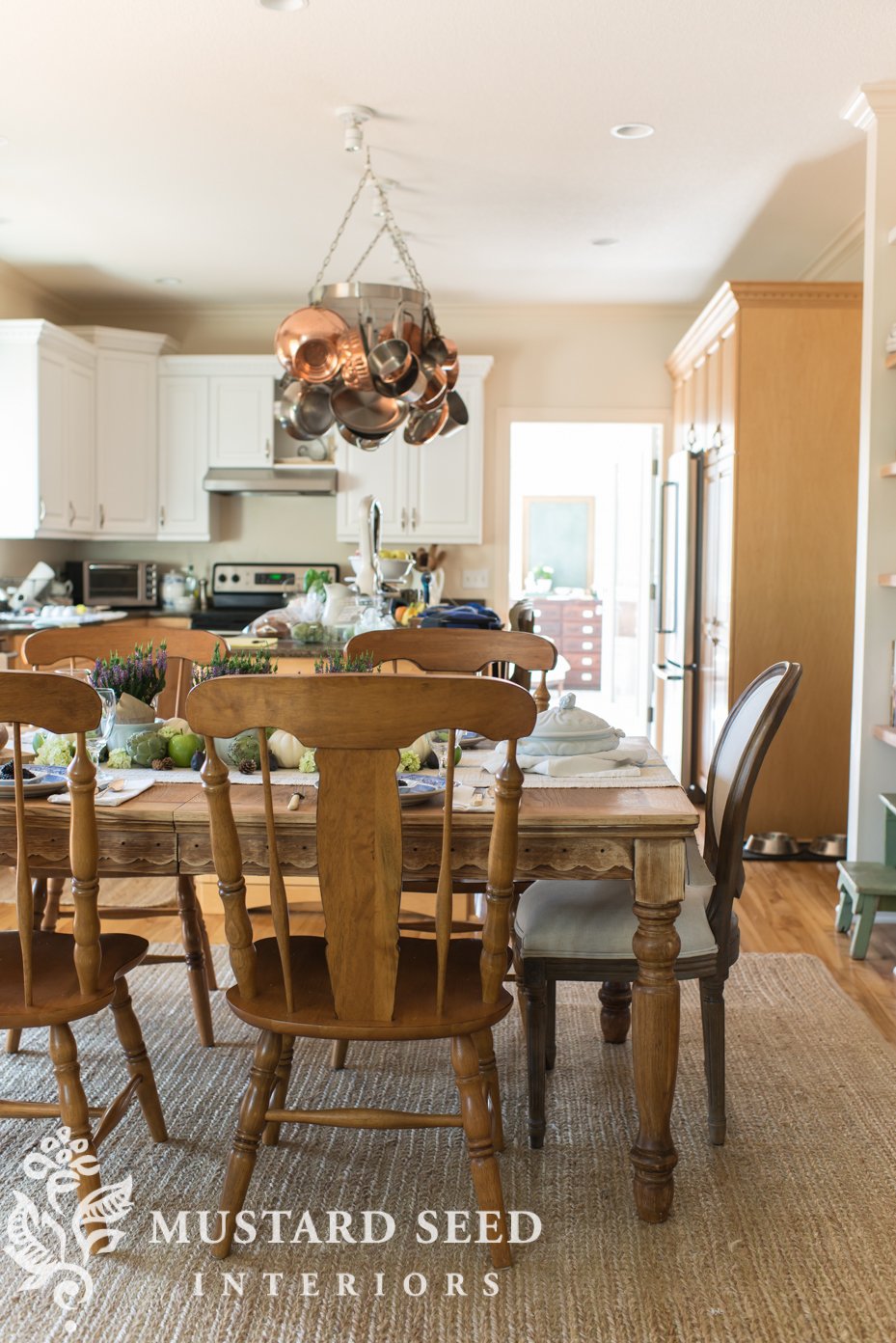 For more fall-decorating inspiration, check out these gorgeous dining rooms…

My Sweet Savannah | and our beautiful featured guest, The Inspired Room

(In case you were wondering, there wasn’t a memo about using purple!)