It all started very innocently.  As a part of my organizing push in February, I tackled the lower right built-in in the living room.  It’s not a cabinet we’re in and out of a lot, so it’s been sorely neglected.  It houses our photo albums, boxes of photos, some family mementos, and it’s where we would drop the school photos each year.  It’s also where I would stick random decor, apparently, like the antique scale. 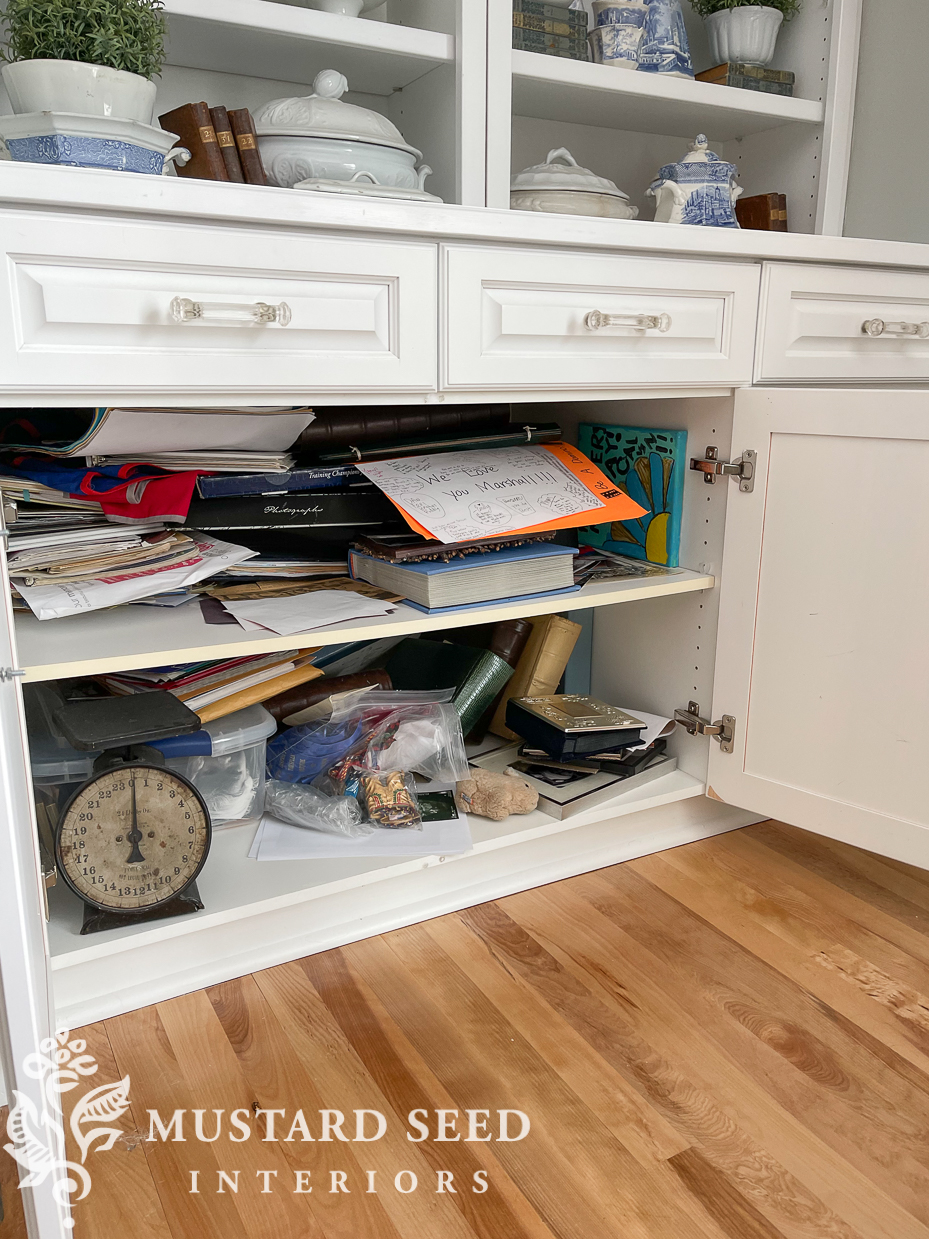 I’ve been avoiding this cabinet because it’s such a mess, but I finally dove in.  As is the case with most messy cabinets, it looked worse than it was.  It didn’t take me long to get things sorted and labeled.  I readjusted the shelves so the photo albums could stand upright.  I sorted the remaining photos and documents into categories and put them in bins.  I also added labels to everything… 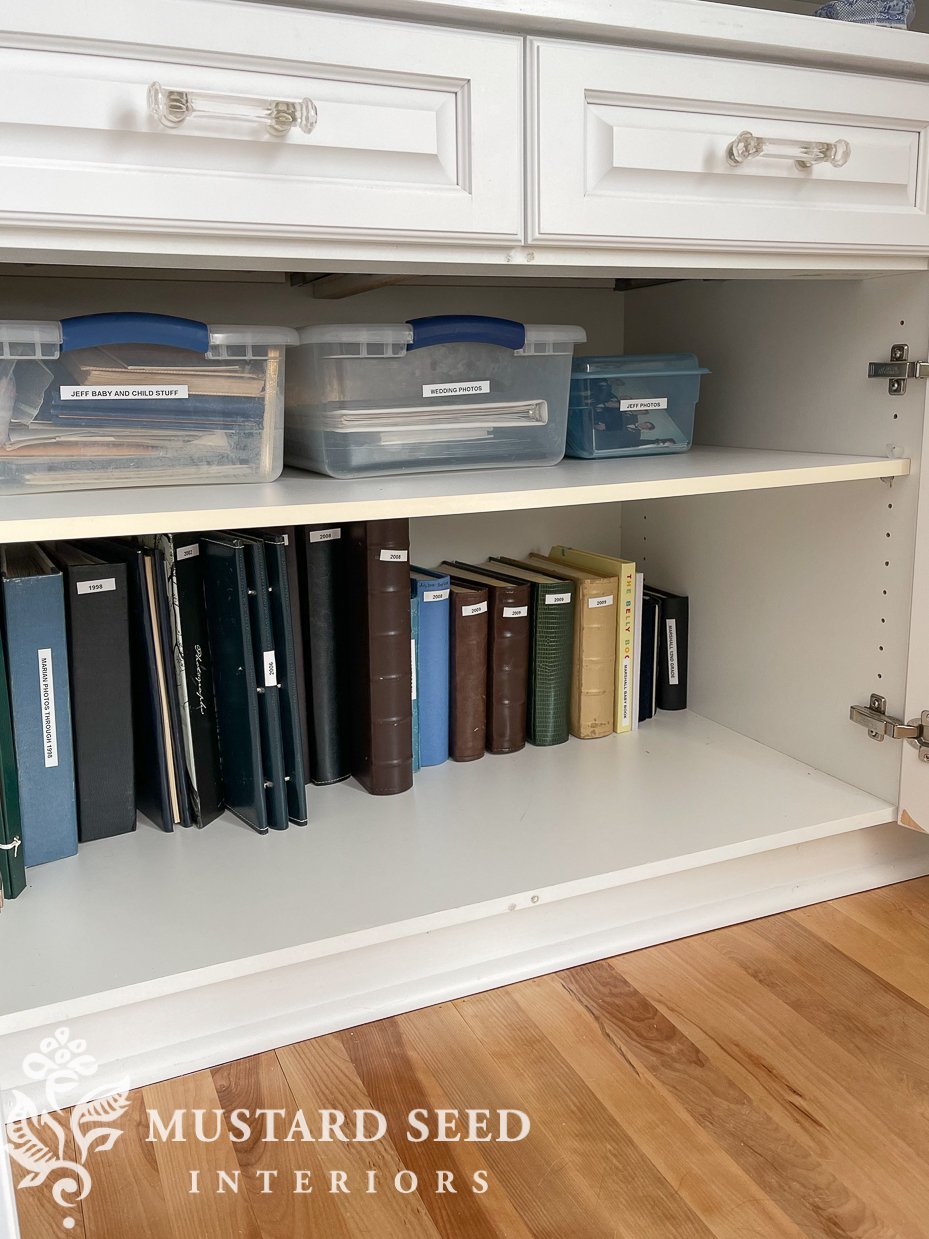 Everything that is loose or in plastic bins will go into archival boxes that I buy when my no-spend February is complete.  By sorting everything out, I know exactly how many boxes I need and the appropriate sizes. 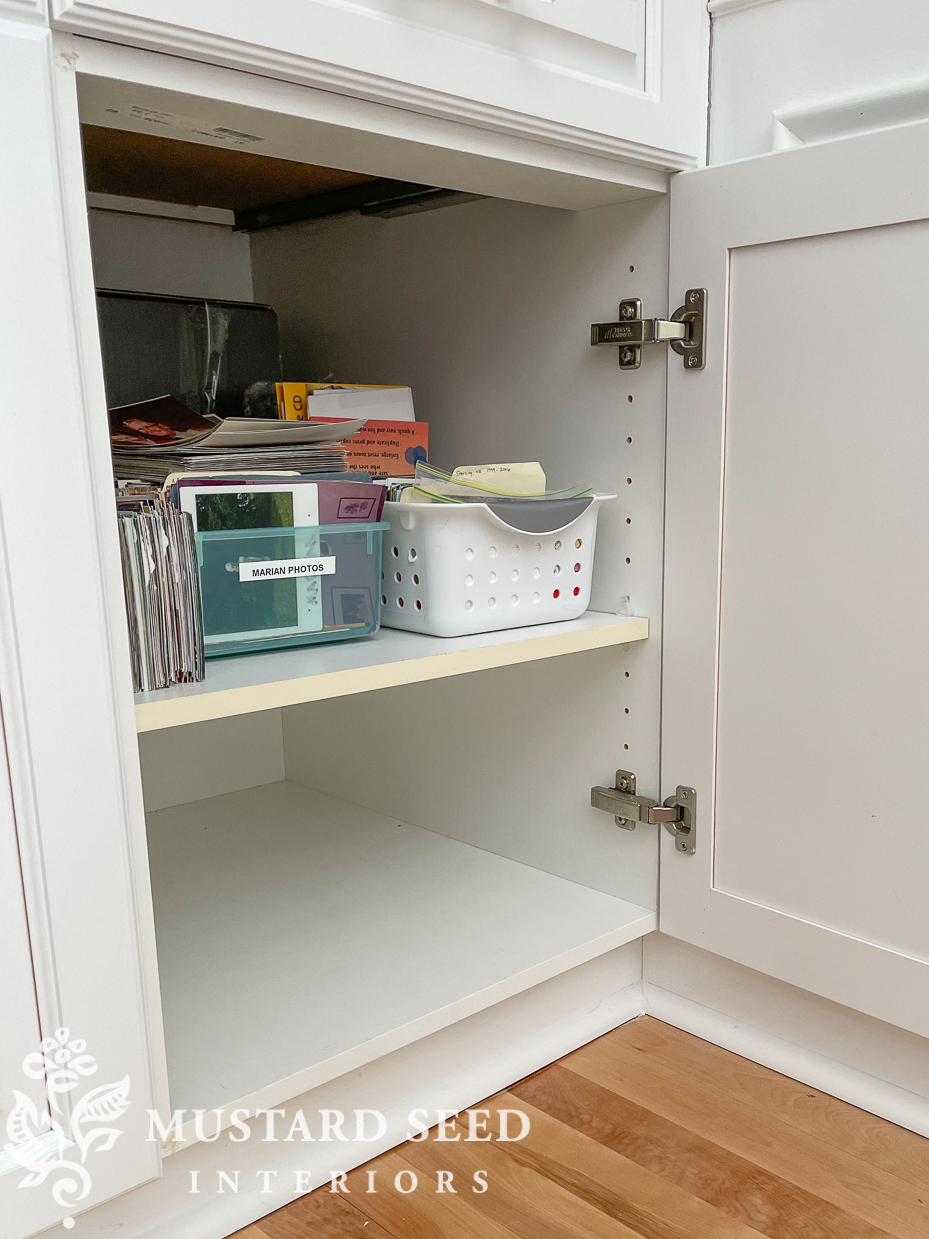 All of this will go into archival boxes, sorted by year and place. 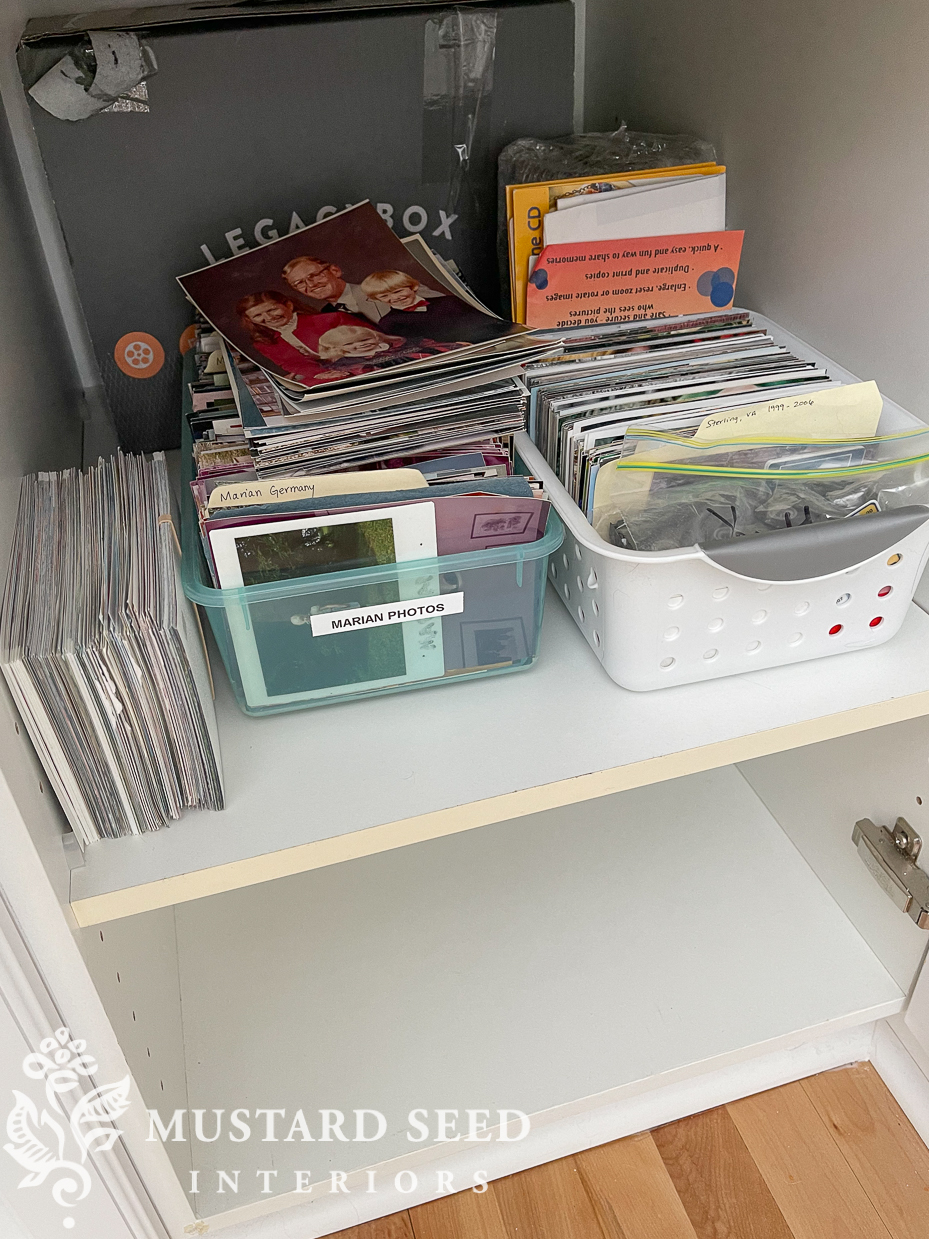 The boys’ mementos were sorted and added to their “memory boxes” in their closets.   I’ll sort those out with them when I get to cleaning out their closets, which is on the to-do list. 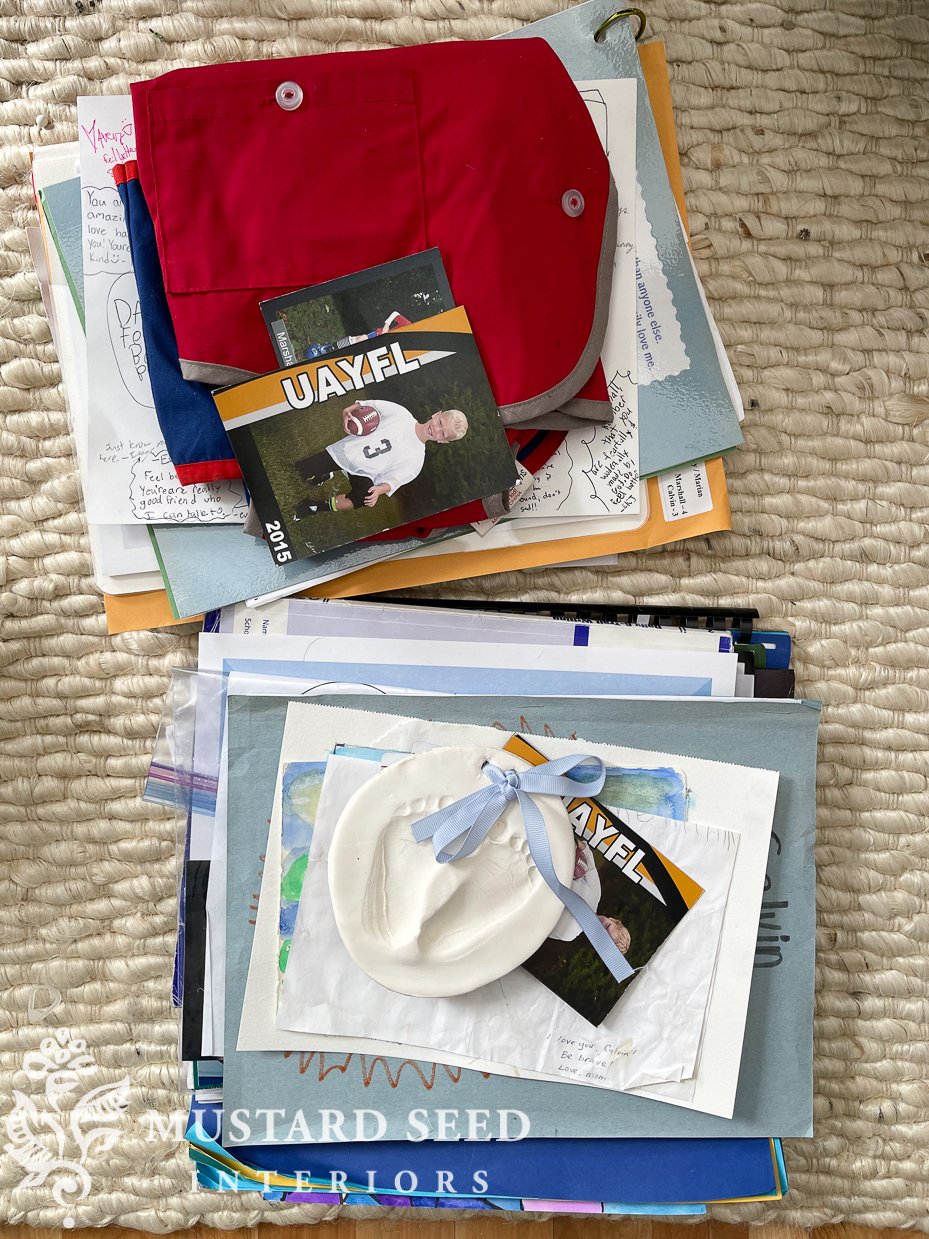 And I set aside a stack of photos to put in albums I buy in March. 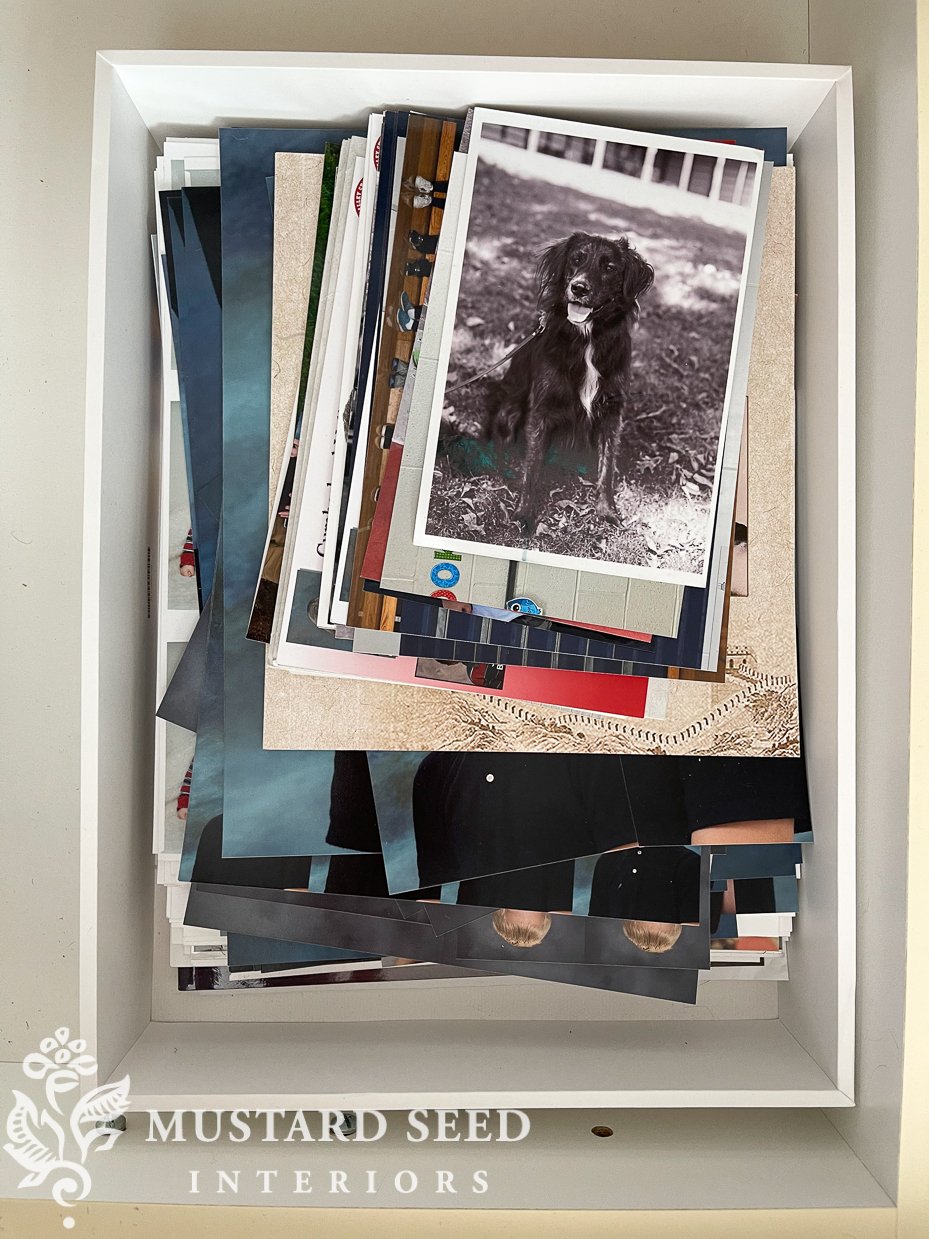 I used to be so good at putting photos in albums, but that completely fell off a cliff after 2009.  Since most of the current photos are on our cell phones or computers, I’m also going to make some print-your-own picture books to cover the past few years.

This led to me deciding to make a printed cookbook from my great-grandmother’s recipes.  My mom scanned her cookbook years ago, so we’ve had it in the form of digital files, but I kept losing track of it!  Is it on a thumb drive?  An external hard drive?  A disc?  Where did I see it last?  I make a few of her recipes for holidays, but I wanted to make more of them and preserve her recipes as a part of her legacy for future generations.  So, I spent a few hours last week putting together a book… 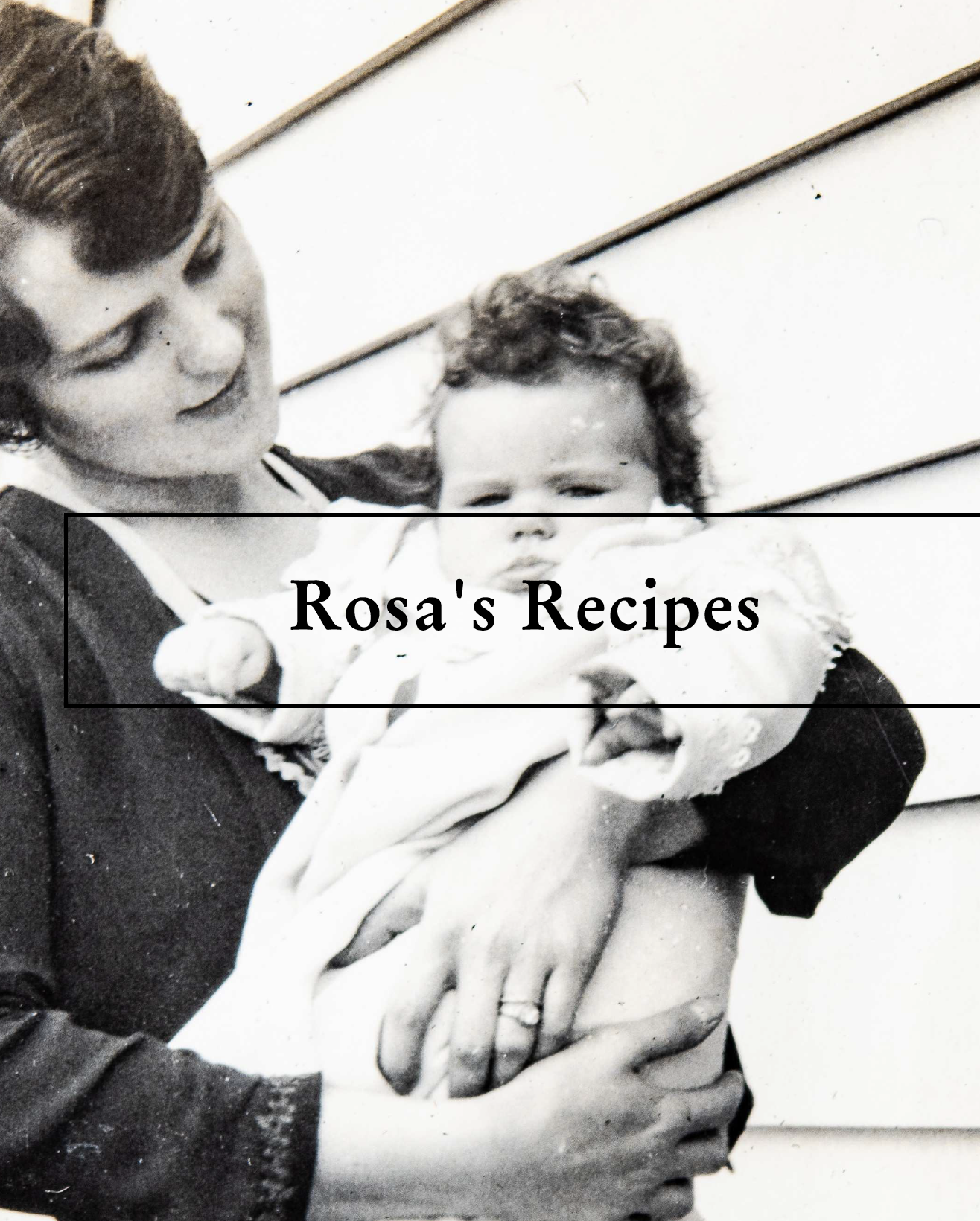 It includes typed recipes and scans from her book.  Some of them are so funny, like this recipe written on a calling card! 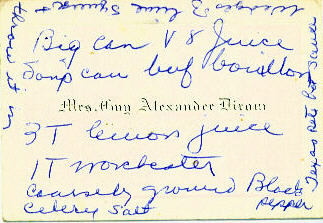 She also wrote “Television” as a part of any recipe she got off of the TV, like “Television Biscuits” and she included notes about whether recipes were good or not.  Many of the recipes don’t include measurements, cooking temps or times, or give general instructions like, “cook all day.”  It’ll be an adventure cooking some of those recipes, but I’m going to try it!  I thought it would be a fun blog series to cook through her book and share the winning recipes.

And I’ve learned about all sorts of old southern recipes I’ve never even heard of like Rinctum Ditty! 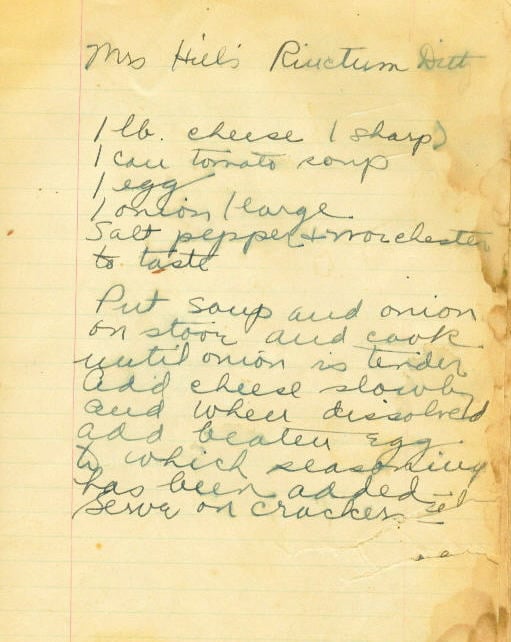 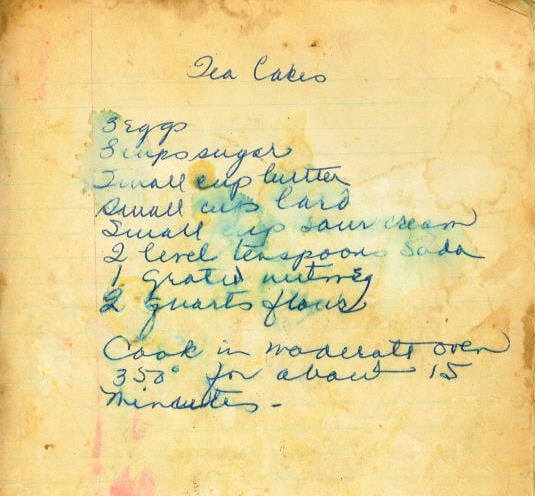 I just ordered the book this morning, so I’ll let you know more about that process, the cost, as well as the quality of the book.  And yes, I broke my no-spend February to order it, but I saw it as a part of organizing.  Maybe that’s a justification, but I’m at peace with it!

Putting together the cookbook made me wish I had more conversations with my great-grandma, Rosa.  I wish I had learned more about her life, asked her to teach me to crochet, and cooked a few of these recipes with her.  In fairness, I was only about 10-12 when she died, so I didn’t have an appreciation for older generations.  Now that I am an adult, I need to follow that pull to know more and connect with the older generations in my family to carry on the stories, pictures, documents, and lineage.

This led me to very innocently starting a family tree on Ancestry.com.  I looked into a few free resources first but decided to sign up for the free trial and give it a try.  I actually knew a lot about our family tree, so I was able to plug people in and find information pretty easily.

Then, it took a turn.  I found this document attached to George C. Ball, my 5th great-grandfather… 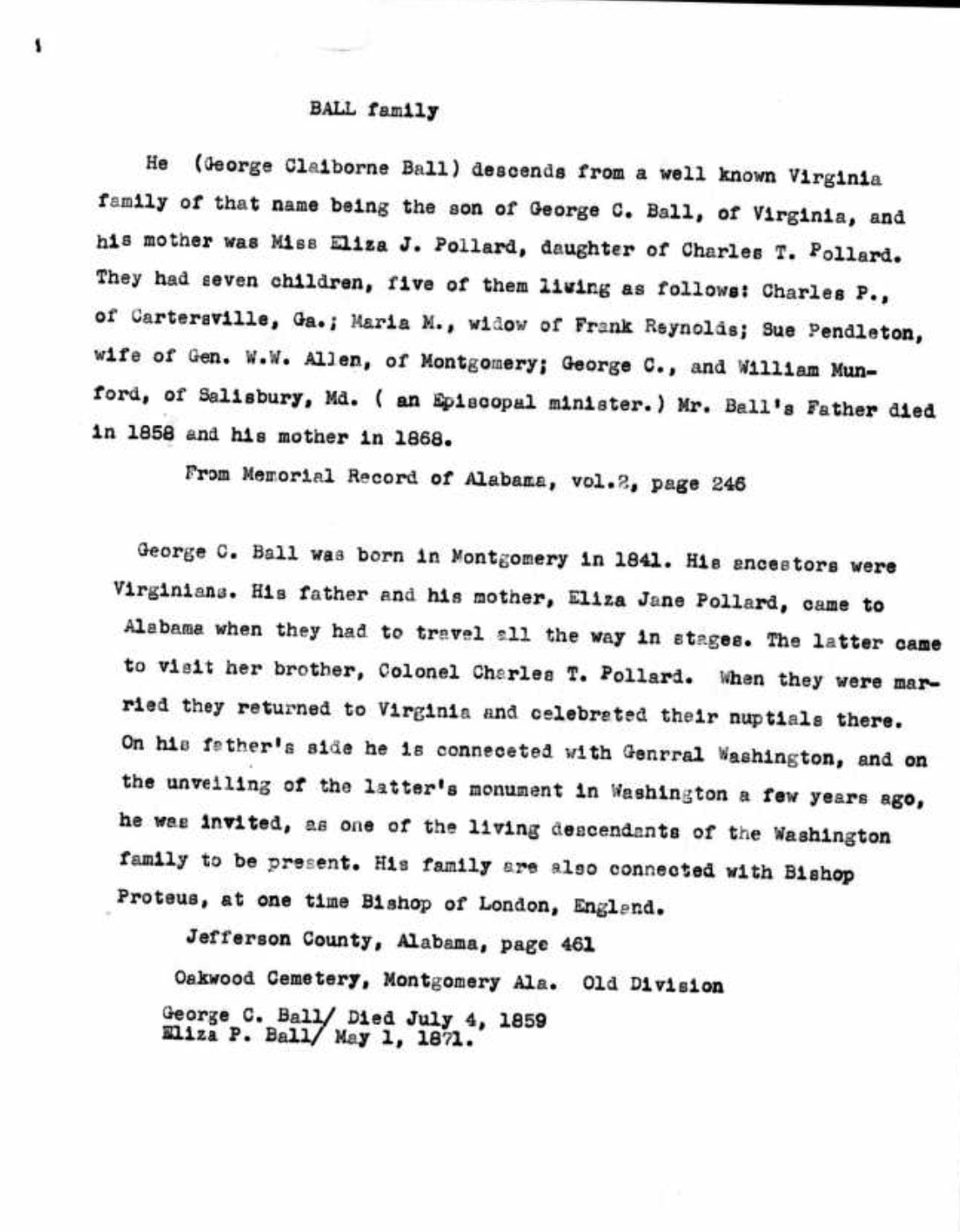 Wait, what?!?  He was invited to the unveiling of the Washington Monument as one of the living descendants of the Washington family?  How did I not know this?  Does that mean we’re related to George Washington??  This turned me into a bit of a crazy woman.  I’m calling my parents asking them what they know.  I’m scouring the site for genealogy information to see if I could find the connection.  I found a genealogy book but was woefully ignorant to how genealogy books are arranged and couldn’t decipher it.  I sat in my office for hours, burry-eyed and determined.  Jeff kept looking in on me and I would tell him, “I’m almost there!  I’m getting so close!”

And I finally found the connection.  I felt like there should’ve been a congratulatory pop-up or something, but it was just me sitting at my desk, realizing I had just learned a little bit more about myself and my heritage and it was pretty cool.

(If you’re curious to trace the tree, my great-grandparents are on the far left and you can trace the tree from Charles P Allen Sr. over to Augustine Washington, George’s father.)

My 7th great-grandfather is Charles Lawrence Washington, who was George Washington’s youngest brother and the founder of Charles Town, WV.

And that makes Happy Retreat one of my family homes… 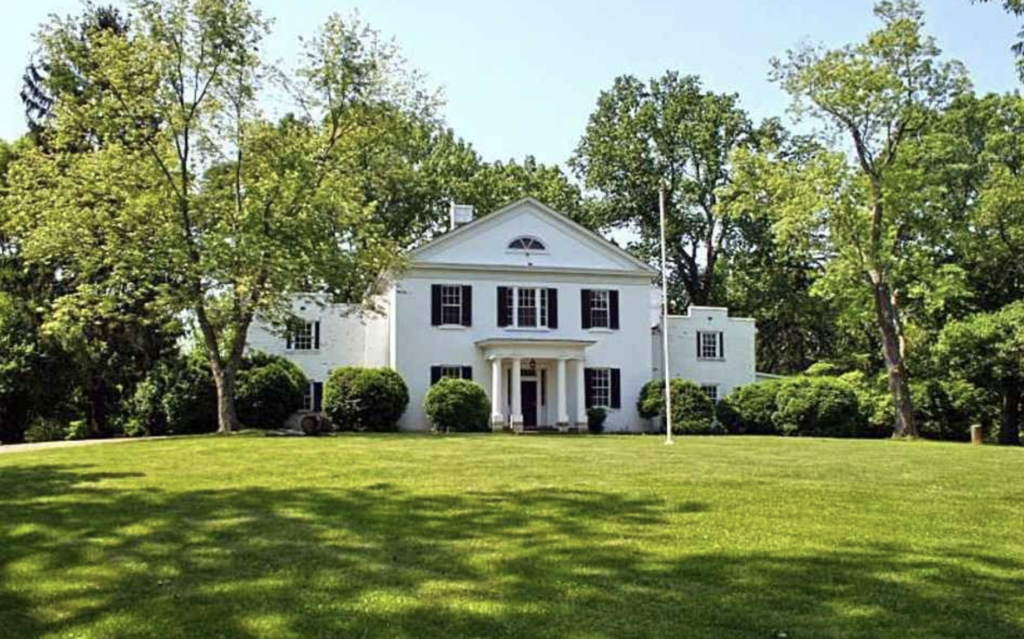 And, that makes George my 7th great-granduncle.

And, their father, Augustine Washington, is my 8th great-grandfather.

And that means Mt. Vernon, built by Augustine, is one of my family homes, too… 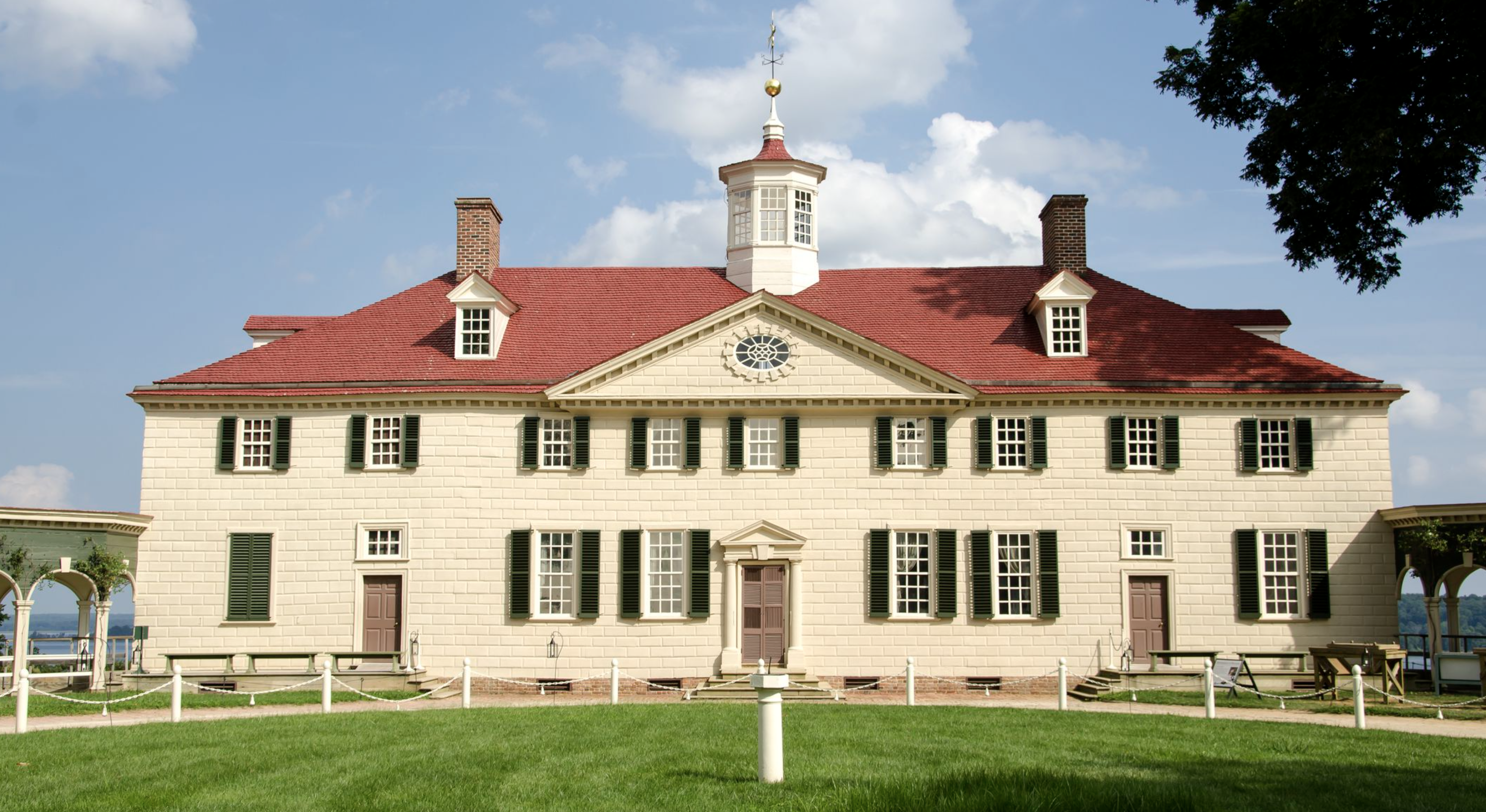 I finally emerged from my office with a printed family tree, articles, and notes, and showed Jeff my discovery.  I texted my brother and called my mom to let them know of the family connection.  We’re not distant cousins 10-times removed, but direct descendants of the Washington family.

The handy thing about having someone notable in your family tree is that it makes it easier for you to fill out your own tree.  Since extensive study has been done on George Washington’s ancestry, it means that I can piggyback on that work.  Starting with his father, my tree is identical to his in that branch.  This led back to the 1200s…to the Plantagenets…and eventually to Edward “the Longshanks”, Edward I, King of England (and yes, I realized he’s quite the villain)…

…and my 23rd great-grandfather, King Henry III of England.

It also led to King Louis VII of France, my 26th great-grandfather, but I’m still researching that one more.  I haven’t gone back and checked every connection as I did with Washington & King Henry III.

And that means this is also a family home… 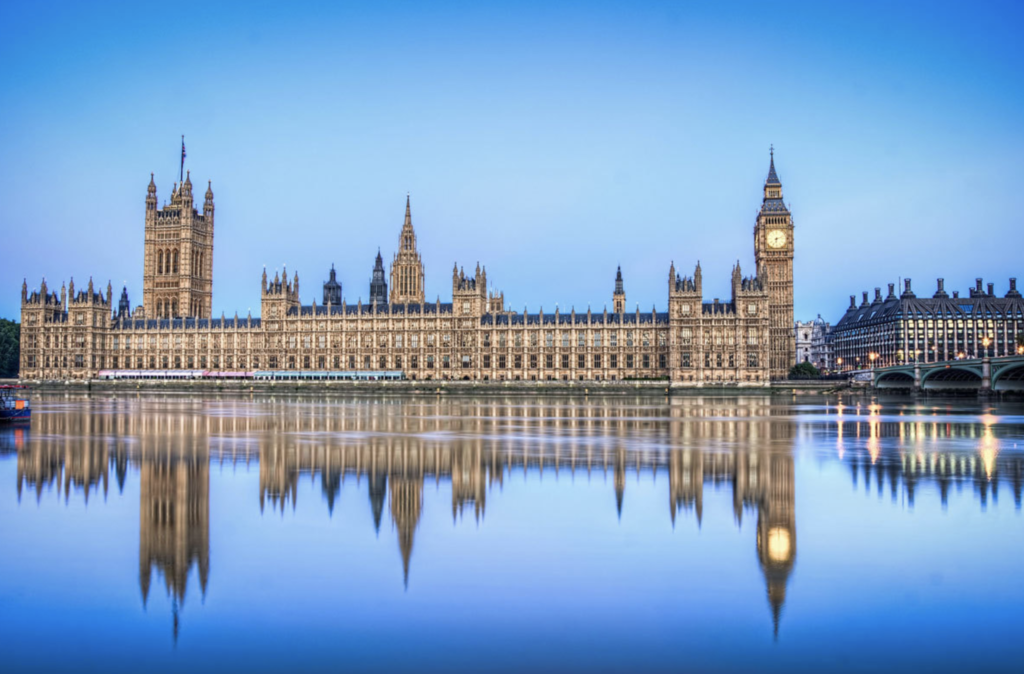 I told Jeff on Saturday morning, after this discovery, that he needs to address me as Lady Marian from now on.  And then I did laundry and cleaned the bathrooms.

So, just from cleaning out the cabinet with our photo albums, I have discovered all of these new things about my family and myself and I have found a new obsession – genealogy.  I can see how addictive it is!  I kept thinking that I’ll just research one more person and then I’ll stop.  I’ll find just one more connection and then I’ll get back to cleaning.

While it’s fun to find presidents and royalty in the family tree, I was equally intrigued by my more obscure family members, like my 14th great-grandmother who gave birth to my 13th great-grandfather when she was only 10 years old in 1550.  Of course, no father is recorded.  Was that a case of mistaken dates, a typo, or was she actually 10?  What happened to that poor girl?  Was that commonplace?

I will definitely be doing more digging.

For those interested in researching their own family trees, here is what I found to be helpful…

Once I found George Washington, I was able to look up his famous ancestors, which is how I found the connection to Henry III.  I used famouskin.com to trace the line, but I double-checked every person against other sources.  Some of the names were not correct, so I had to make some adjustments, add dates, etc.  For outside sources, I’ve been using geni.com to search for specific people, various specific family genealogy sites and eBooks, and wikipedia in the cases of more notable family members.

From looking at famouskin.com, I know I can trace connections to all sorts of people, but I’m not as interested in distant cousins.  At this point, I want to trace my grandparents as far back as I can and then I’ll maybe expand.

I needed another hobby like I needed another ironstone pitcher, but I’ve learned that hobbies tend to find you and it’s hard to ignore something you feel enthusiastic about.  I just hope it doesn’t distract me too much from my organizing!

Is anyone else into genealogy?  Have you found any famous grandparents?