We only had one day in Florence and it happened to be a Monday, so all of the museums were closed.  We arranged to meet with a guide and tour the city for a couple of hours on foot, but an e-mail mishap left us on our own.  Without a plan or a guide, we just walked around the city, map in hand.  I would not advise that!  We did a lot of touring on our own in Paris, but we had a plan and a loose schedule for each day, so we weren’t wandering aimlessly. 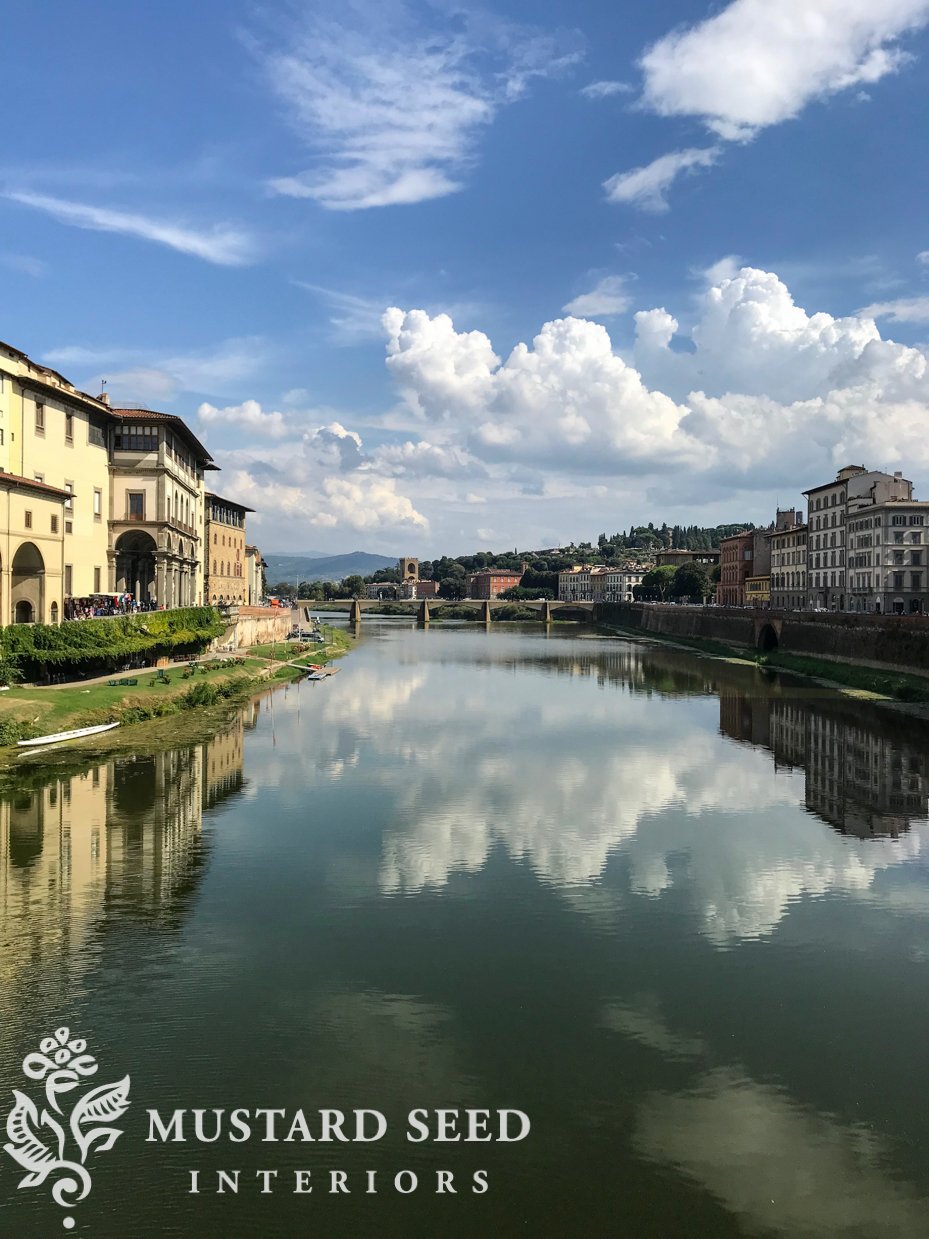 So, we strolled and I took pictures. 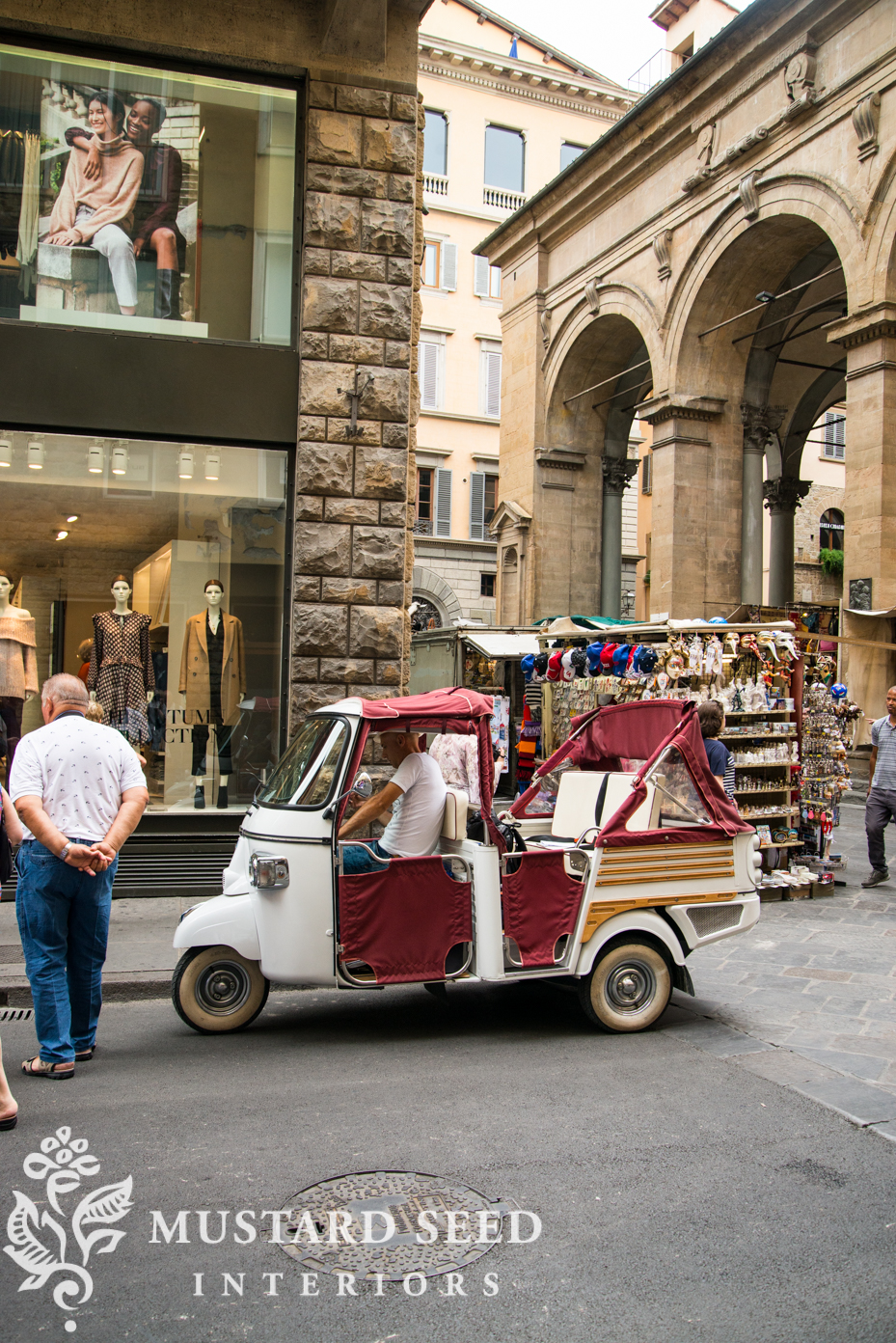 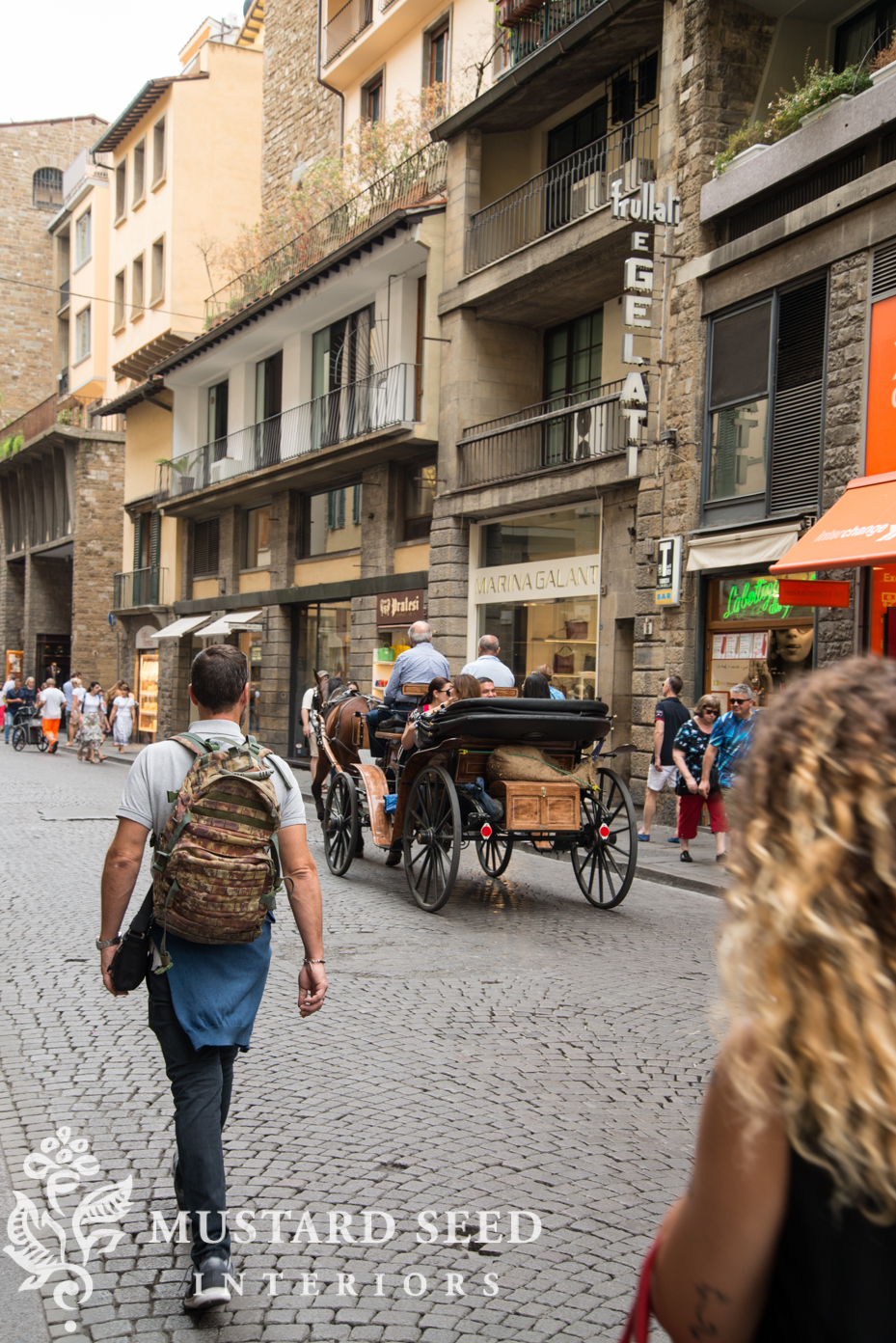 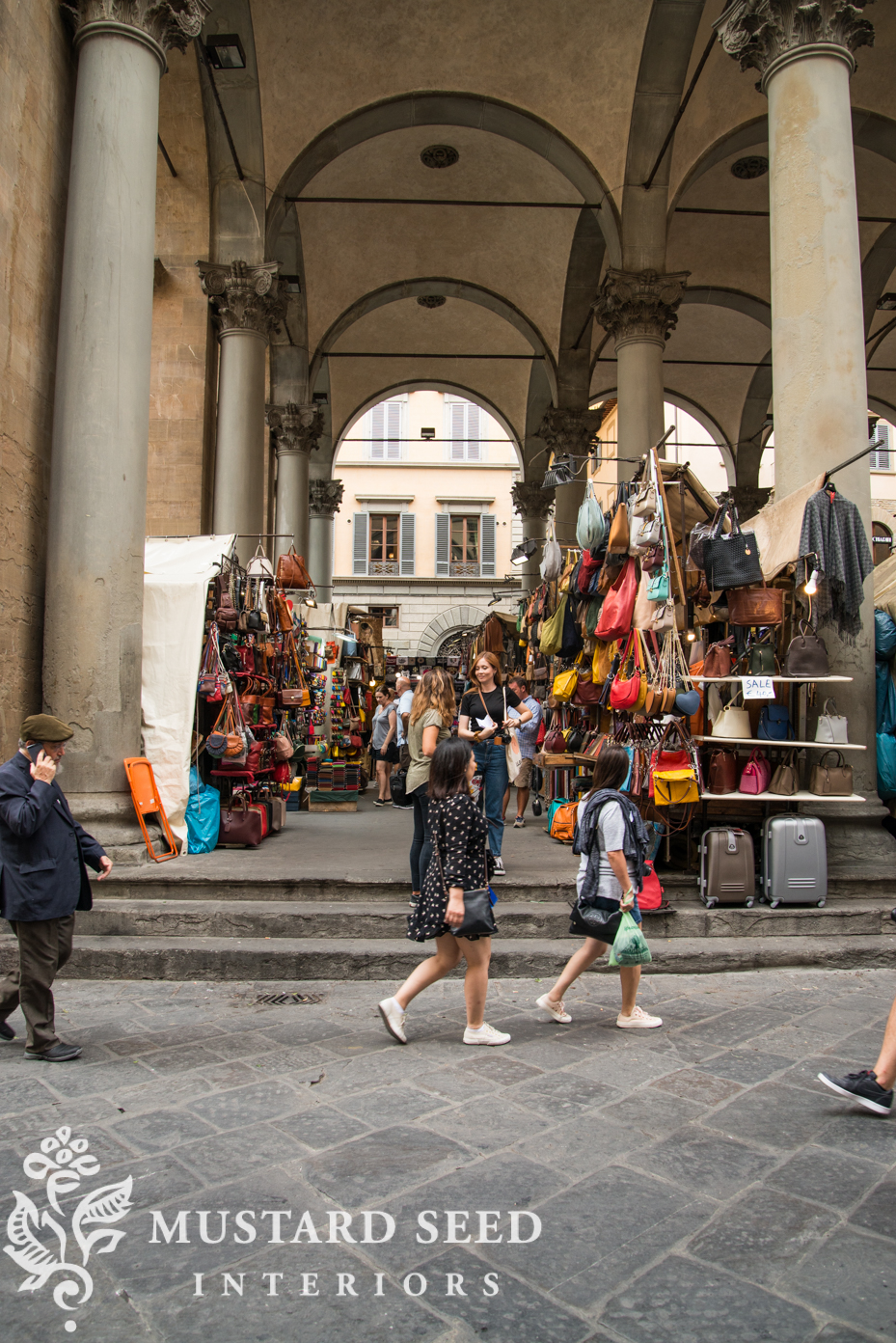 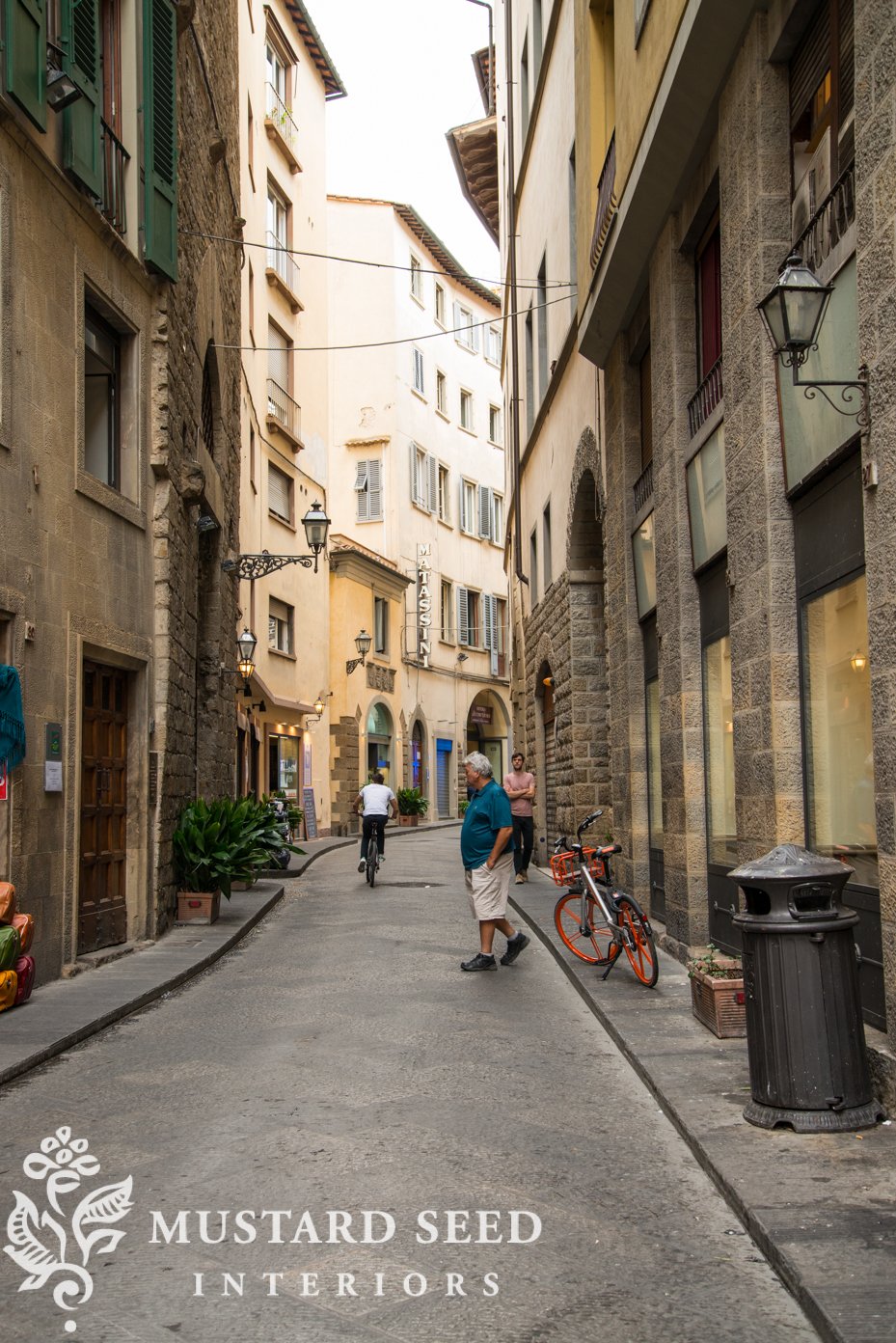 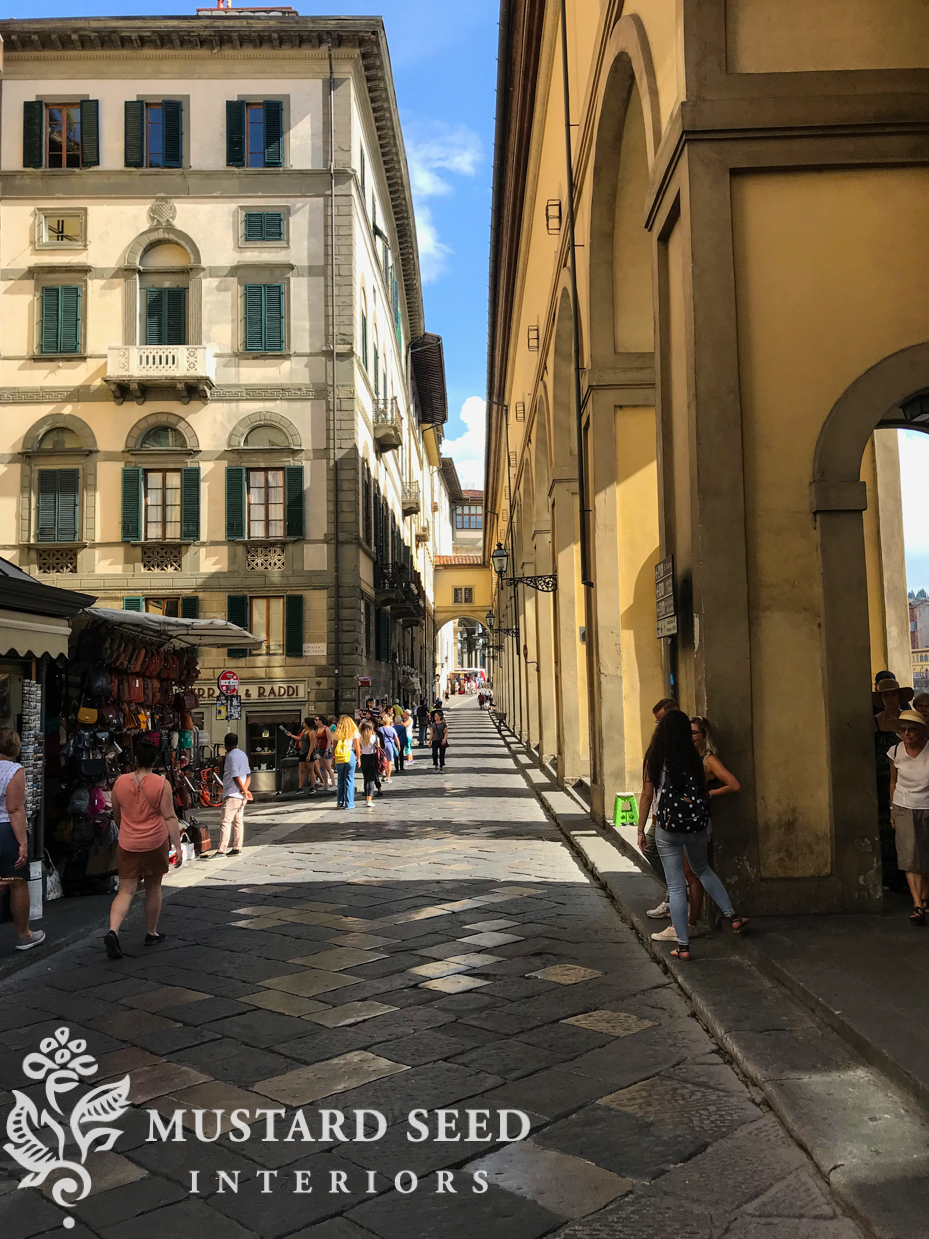 My mom and I were both craving good, Italian pasta for lunch, which you think would be everywhere, but most of the places on our path seemed to be touristy or didn’t have the kind of pasta dishes we were hoping for.  We finally came across a small restaurant with chairs and tables set up outside, right next to the Duomo.  A street performer played an accordion, providing appropriate ambient music, and it seemed like an all-around nice spot to sit, rest our feet, and eat some pasta! 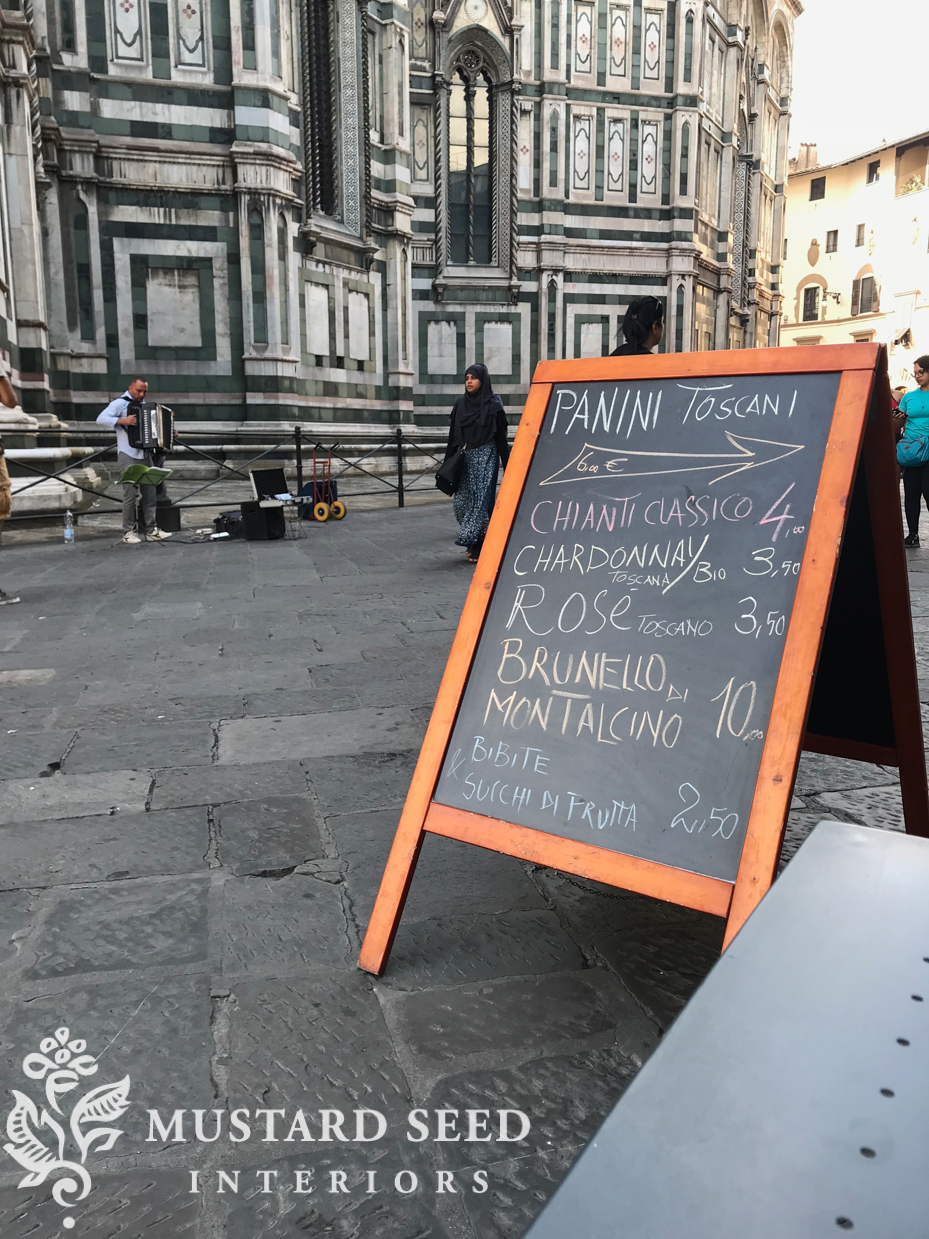 We sat at an unoccupied table right next to the posted menu and waited to be served.  A gentleman in an apron was hovering around the tables and made eye contact with us, but didn’t approach.  We sat there and he kept looking over at us, almost asking a question in his glances.  He finally walked over and raised his eyebrows inquisitively.  We thought it was obvious why we were sitting there, but we asked for a menu.

“Oh, we don’t have a menu.  You taste a sample and then tell us what you want.”  We looked back at the posted menu and back at him.

“Are you not serving these dishes now?”  I pointed at the menu.

Ah…we had accidentally claimed a table for Panini Toscani, a sandwich shop.  The tables and chairs were literally right next to each other with only an invisible line and a few inches dividing the two seating areas.  My mom and I looked at each other and hesitated.  We started to reach for our bags to move the seating area of the restaurant serving pasta.

This movement was interrupted by an American man, in the middle of eating a panini.  He called out to us, “These are the best paninis in Italy!  Every travel website says this is the best place to get paninis.  You’re an idiot if you don’t get a panini here!”   Now, he was not just saying this quietly across the small space between two tables.  He was yelling it over the music and across about three tables of people eating a late lunch.  His voice reverberated off of the Duomo walls and the man in the apron looked at us with anticipation.

I could feel the eyeballs of the other panini patrons on us.

Moving to the other restaurant would mean we would get pasta, but we’d also be sitting inches away from the friendly man in the apron and the American man who said we would be idiots if we made that decision and all of the people watching this exchange.

At that moment, a 40-year-old woman (me) and her mom, who were craving pasta and not paninis, succumbed to peer pressure.

We sat back down.

The man in the apron continued to smile at us and I still felt like we were missing something.   After about five minutes of looking and smiling and surely scrunching my face in confusion, he walked over to us again.  “You go in to taste the sample and then tell them what you want.”

We decided we should go in one at a time, so we didn’t lose our table.  I walked into the sliver-of-a-shop to the starting point.  There was another man in an apron, cutting off small pieces of meat and cheeses.  He handed me one small piece of cheese to taste.  It was creamy and mild, which I liked.  He then had me taste three other pieces of cheese, one at a time, which were progressively sharper and more pungent.  By the time I got to the fourth cheese, it had exceeded my funky cheese limit and I took a little nibble and put the remainder back on the testing plate.

I then tried four varieties of meat, all some kind of ham or salami.  I paired the mildest cheese with a salami and selected arugula and tomatoes as toppings.  They assembled the ingredients and grilled the panini while I paid. 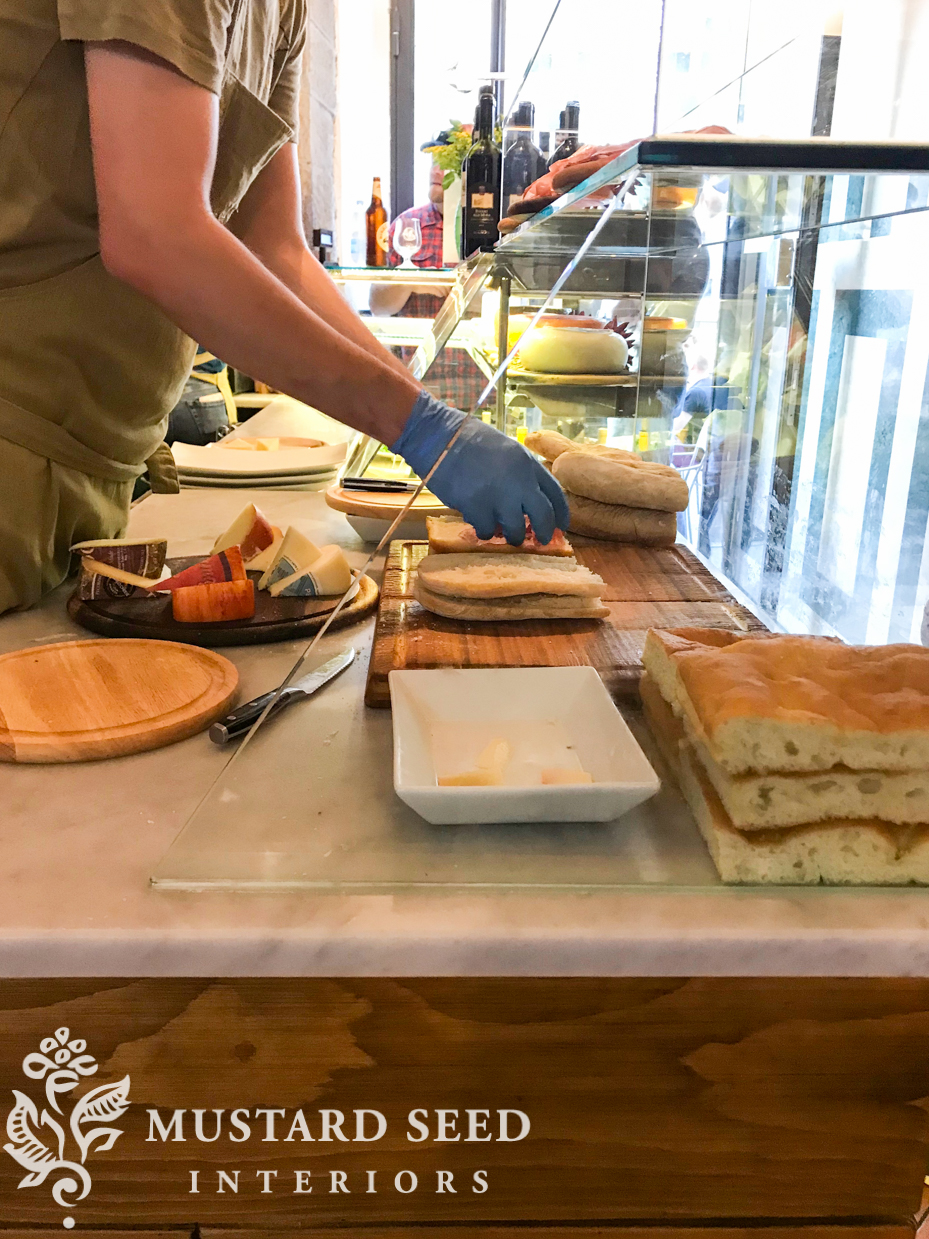 I really wasn’t in the mood for a panini, but the end result was tasty and it was definitely an experience.  I don’t think it was the best ever.  I could’ve used some mayonnaise or honey mustard, but the process was certainly more interesting than simply ordering pasta.  Halfway into the sandwich, I learned that the cheese I liked was sheep’s cheese!  I’ve never knowingly eaten sheep’s cheese before, so it broadened my horizons a bit. 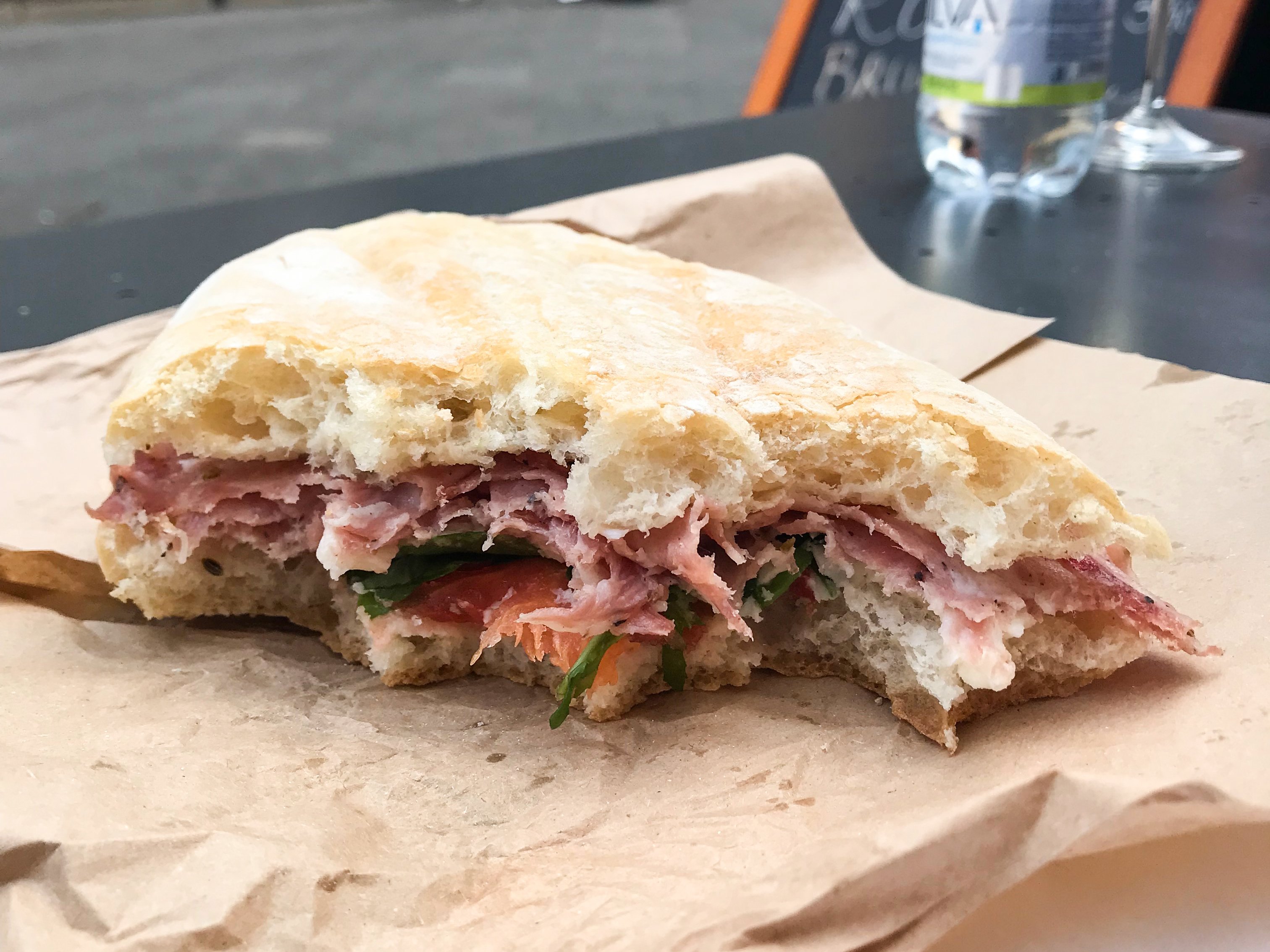 As we enjoyed our sandwiches, a pigeon was shuffling around at our feet.  I know pigeons are pests, but there is something about them that I like.  I enjoyed watching them bathe in water running along the curb, perching like gargoyles on the sides of buildings, and sleeping, tucked into tight little balls, on cathedral steps.  This one was clearly out for some crumbs.  As I observed the bird circling, I noticed it didn’t seem to be walking properly.  The poor pigeon’s feet were tangled together in some hair… 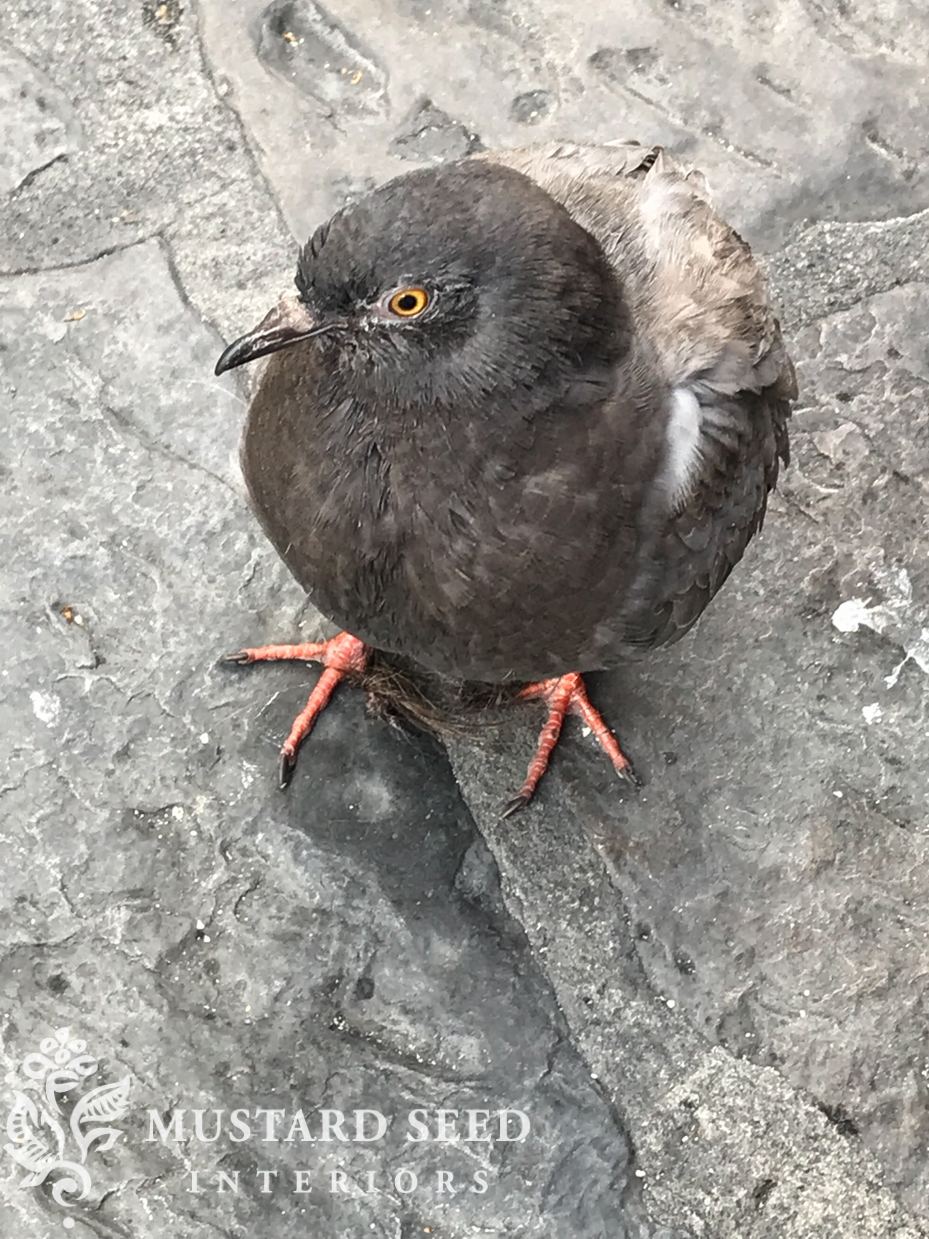 I wish I had a small pair of scissors, so I could free him, but I didn’t and I didn’t even know if the bird would allow me to help.  Even though I knew it was frowned upon, I threw him a few crumbs.  I had pity for the bird and couldn’t help sneaking him some food.

Before we left, I snapped a picture of the panini restaurant’s sign, so I could remember it and share it here on the blog.  The man in the apron saw me framing out the shot and instead of slinking away, he stood in the doorway, crossed his arms, and flashed a big grin. 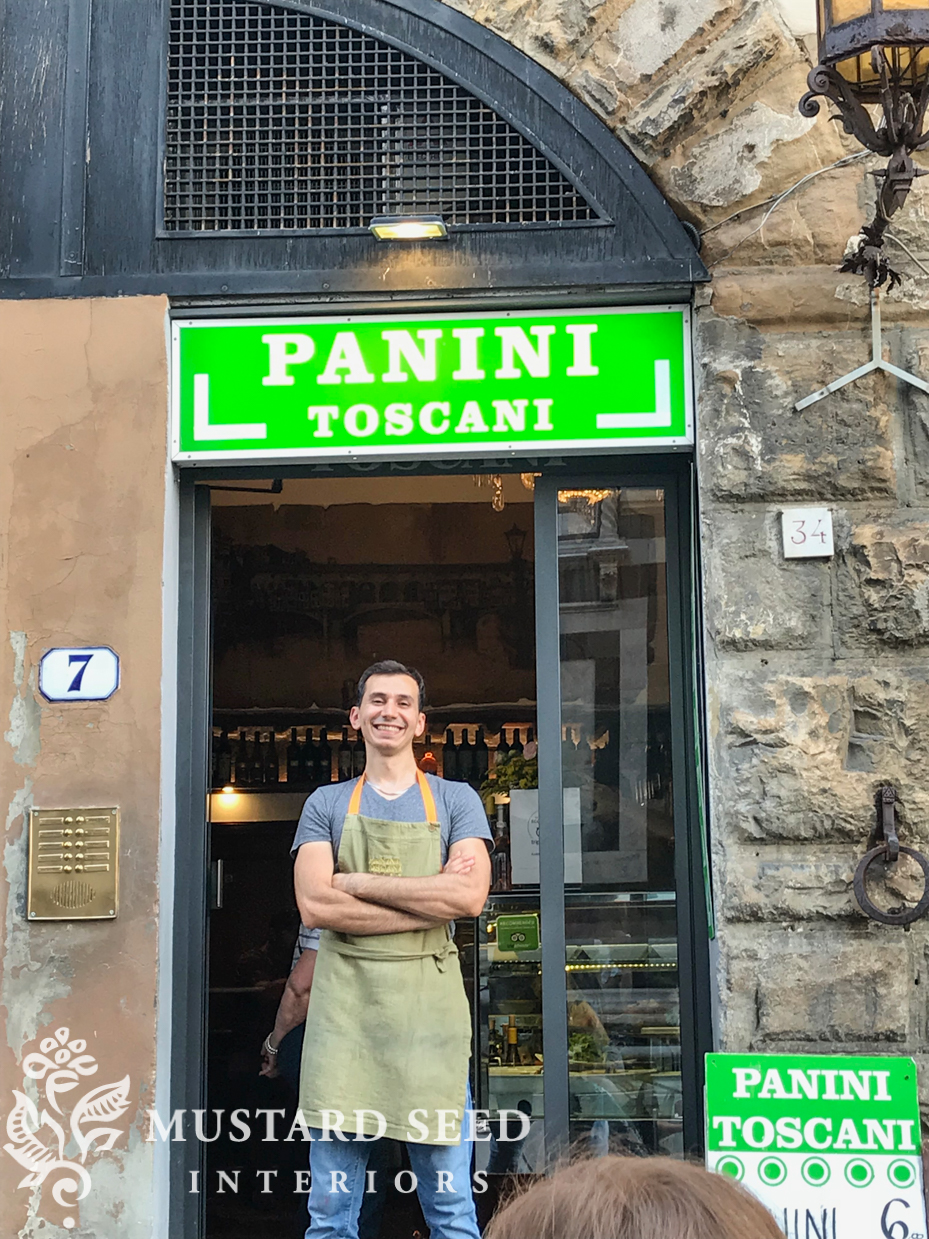 So, if you’re ever in Florence, get a sandwich from Panini Toscani so no one will call you an idiot…

Or, just sit at the right table and eat what you really wanted in the first place.

23 Comments on ““the best paninis in Florence””