Well, I am in Paris and sitting on our balcony overlooking the Eiffel tower as I write this.  There is just no way in the world I can write about all of the events of the past two days in one or two posts.  I think that most of my writing will have to happen when I get home or on the airplane, so I’m not spending precious moments in Europe pecking away at a laptop.

But, I do want to pop in here to share small stories and moments from my trip and then I’ll share the entire narrative (well, the parts that I deem interesting) to flesh out these little stories.

Today, I am telling about the antique sterling silver dip pen I bought while at a flea market.

We went to Marché aux puces de Saint-Ouen and were met there by a Paris Perfect tour guide.  Eric was a specialist in the antique markets and really all things history.  You could see that he loved introducing us to some of his favorite vendors and telling us about that area in Paris.  He was a like a host giving us a tour of his home, which was comforting right off the plane.

After poking through silverware trays and peering into glass cases, I asked Eric if he could inquire about silver dip pens, since they were often made by silverware manufacturers.  We received head shakes from a couple of vendors, followed by a helpful referral to another vendor in another stall who might have a “plume”.  As I’m hearing the word “plume”, I kept clarifying to Eric that I didn’t want a feather, but apparently I need to just keep my mouth shut when listening to French, because “plume” is the word used to describe a dip pen.

At last, we found an unassuming little stall with a little bit of this and that.  At first glance, I didn’t see any dip pens, but I was directed to a case on the left where, just above eye level, were neat rows of dip pens.  I took a step back to get a broader view of the case and it was filled with ink bottles, nib boxes, ink wells, fountain pens, and other vintage and antique writing accessories. 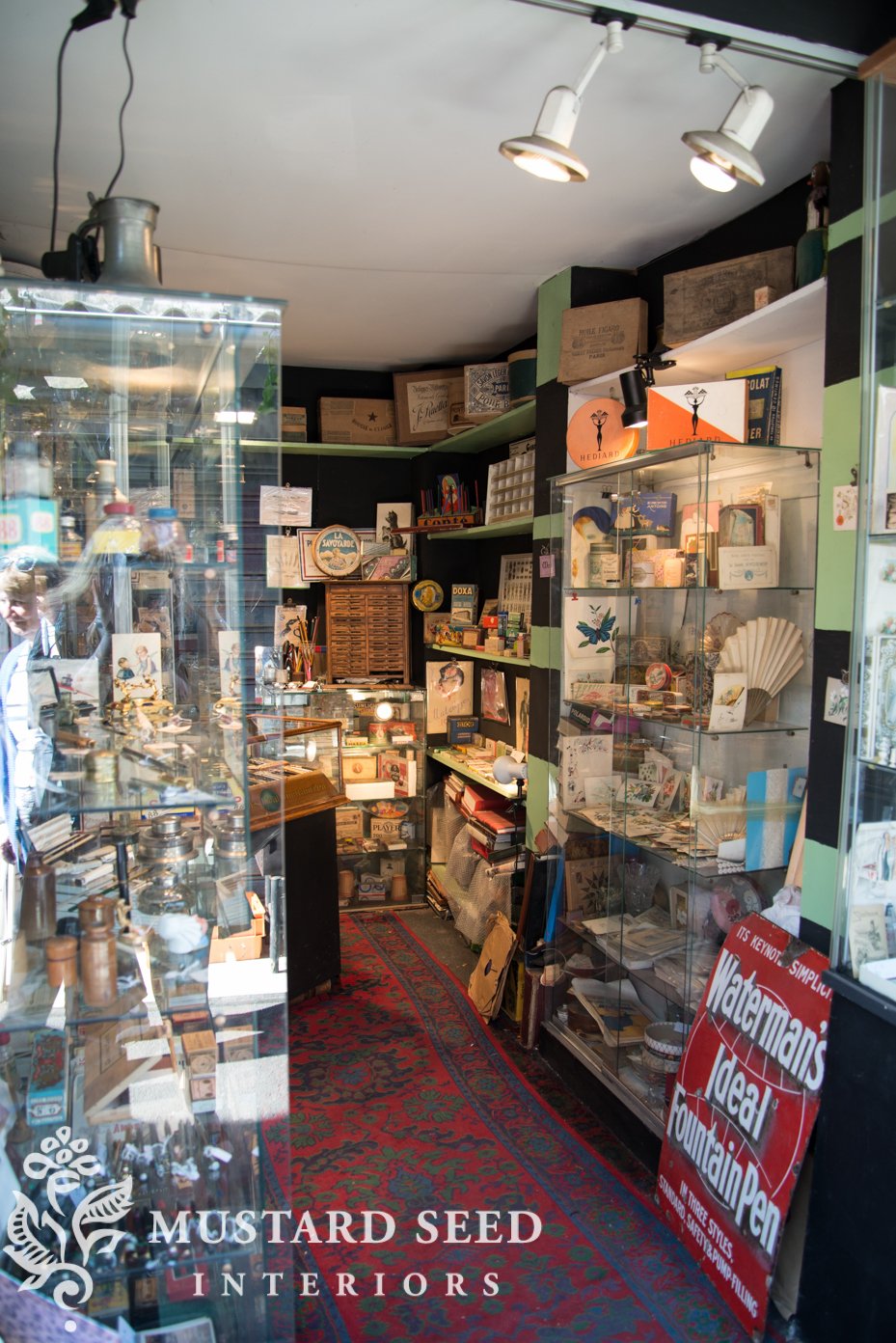 Now, up to this point, I had seen a lot of very beautiful, but expensive items.  Justifiably expensive, since they were very old and in beautiful condition, but expensive nonetheless.  I have saved a generous amount of spending money for this trip, so I was ready to splurge, but I wasn’t ready to spend 300€ on an 1800’s copper bunt pan that would just hang on my pot rack.  (I followed my plan and lovingly took pictures of them as my souvenir).

I held my breath as I pointed at a silver dip pen and asked the price.  It was in my splurge range and I knew it was something I would use that would be very special.  Above all, it would fit in my suitcase.  The vendor, who was a delightful woman named Marie, told me that it was from the 1820’s.  That sealed it for me.  I imagined myself drawing and writing with a pen that’s almost 200 years old that I purchased in Paris.  Sold.

I told her I would like to buy it and asked if she was flexible on the price.  She gave me about about a 10% discount off the tag price and I smiled and nodded.  The universal signal of approval.

Marie carried the pen to her register and she started digging through drawers and bags of nibs.

“Oh yes!”  I had even been looking at the boxes of nibs and asked for the prices.  She waved her hand dismissively and said, almost as an insistent reprimand, “Oh, no, no.  I will give you nibs.”

She picked out ones that were good for drawing and also ones she loved.  It was then that I realized she didn’t just sell pens, but she most likely used them, too. 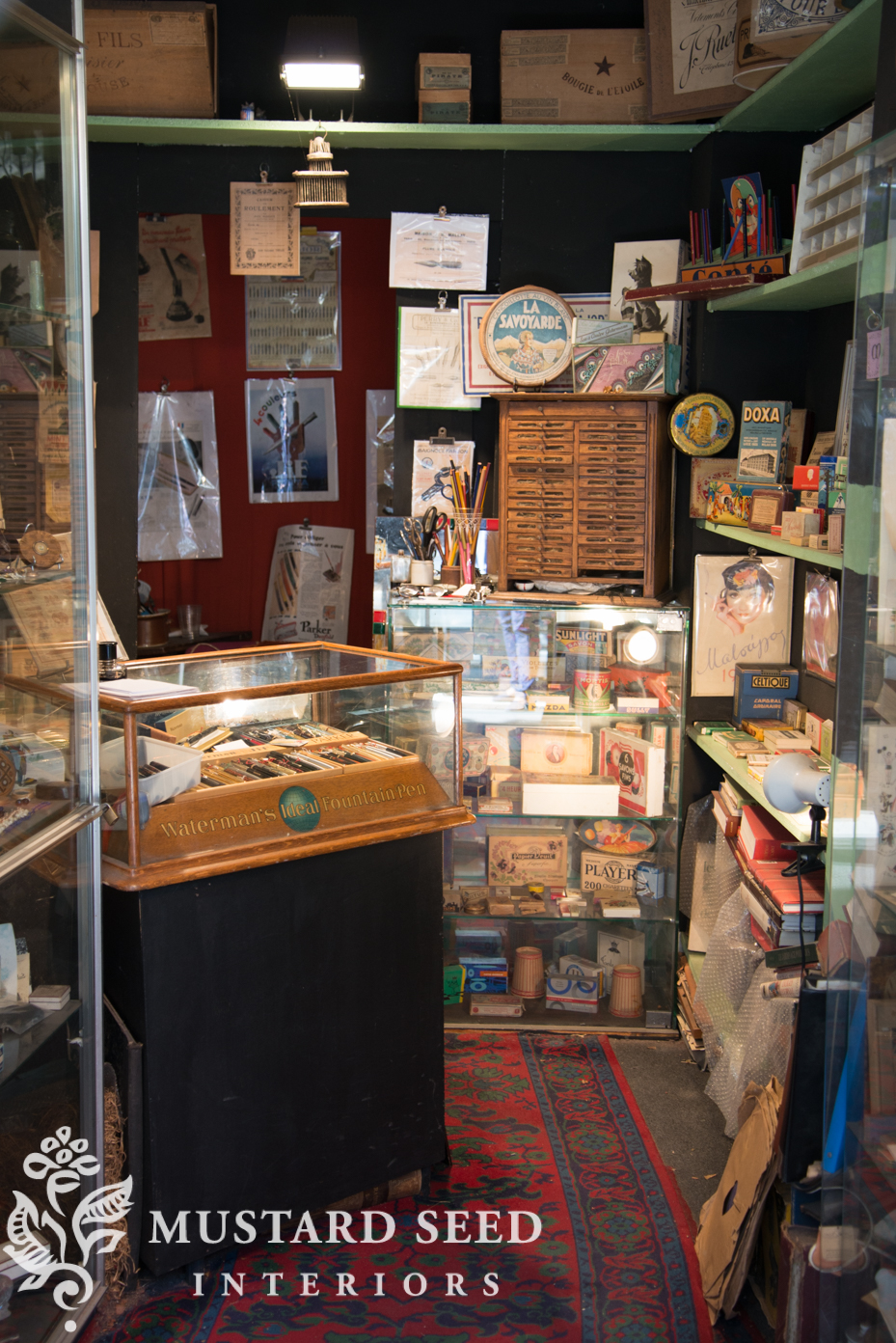 “Do you write with them?”  I had to make a writing motion and point to her.  “Oh, yes!”  She pulled a card out of a drawer that showed her skill with a pen. 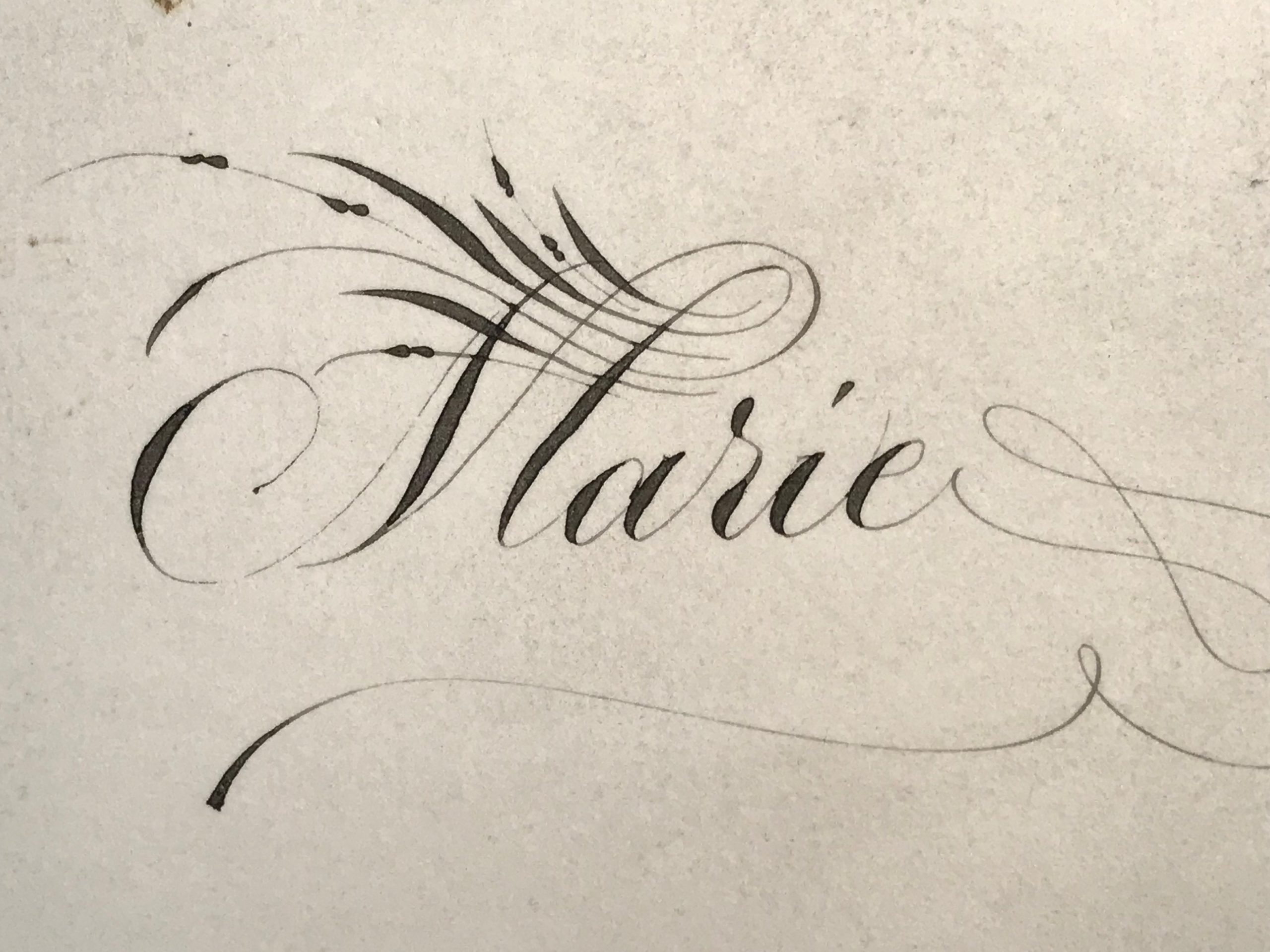 She added a couple more nibs to the bag and sealed it up for me.

Feeling like we were passed the basic shopkeeper/customer pleasantries, I asked, “What is your name?”

Her face lit up and she repeated my name, but with French inflection.  “Ahh, Mari-en!”

I’m not one for hugging strangers, but I had a feeling I just met a kindred spirit.  We don’t speak the same language, but found a common love and we appreciated one another for it.  I held my arms out, silently asking if I could hug her.  She leaned in for a hug and kissed me on both cheeks.

She walked me out of her stall and we exchanged kisses once more. 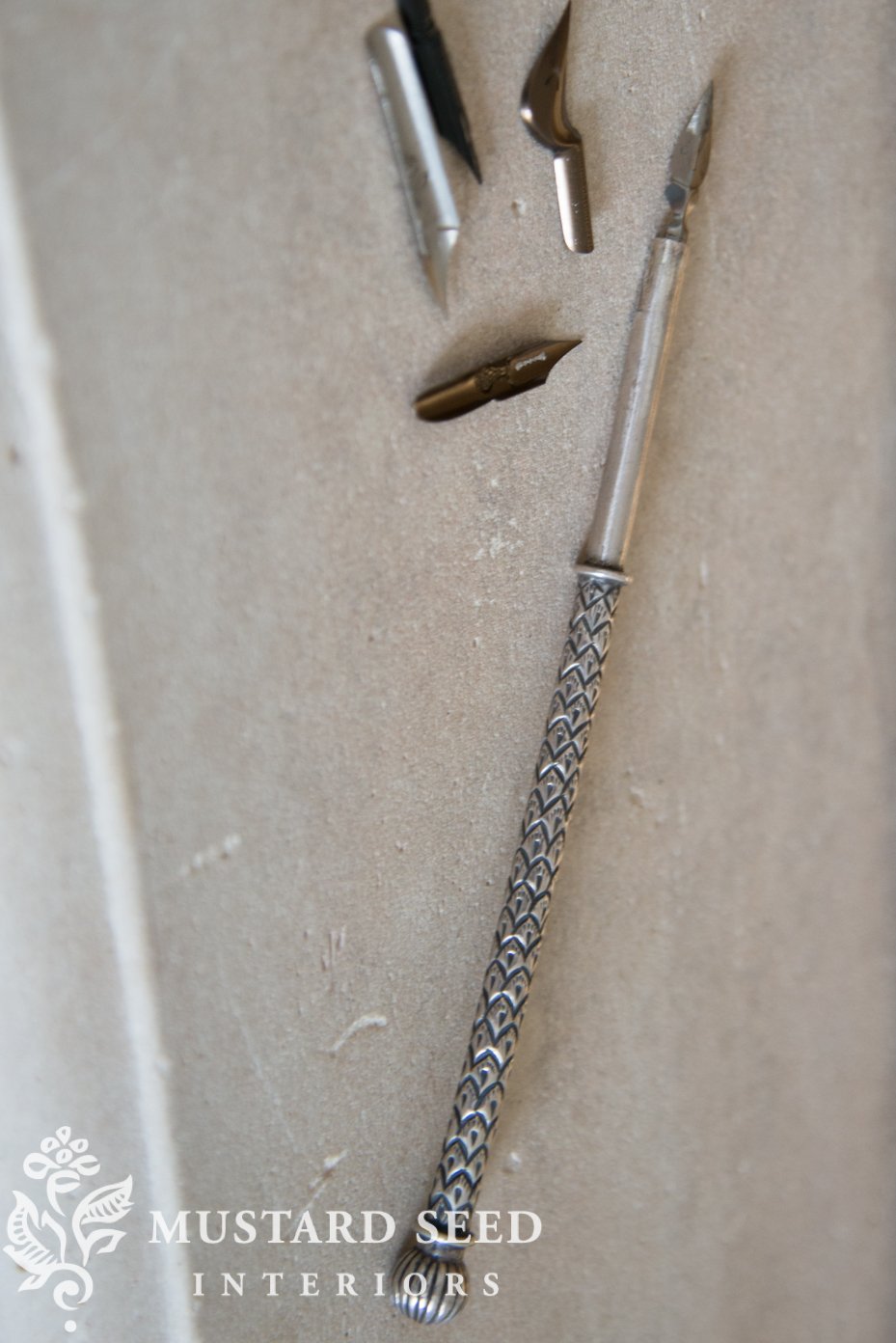 The rest of the group had been looking around at other stalls and then waiting for me until I emerged.  They witnessed the kisses and Wendy (of Front Porch Mercantile) said, “Well, I guess she bought something!”

I bubbled with excitement, “I just found a new friend in Paris.”

And the dip pen, beautiful as it is, seemed incidental. 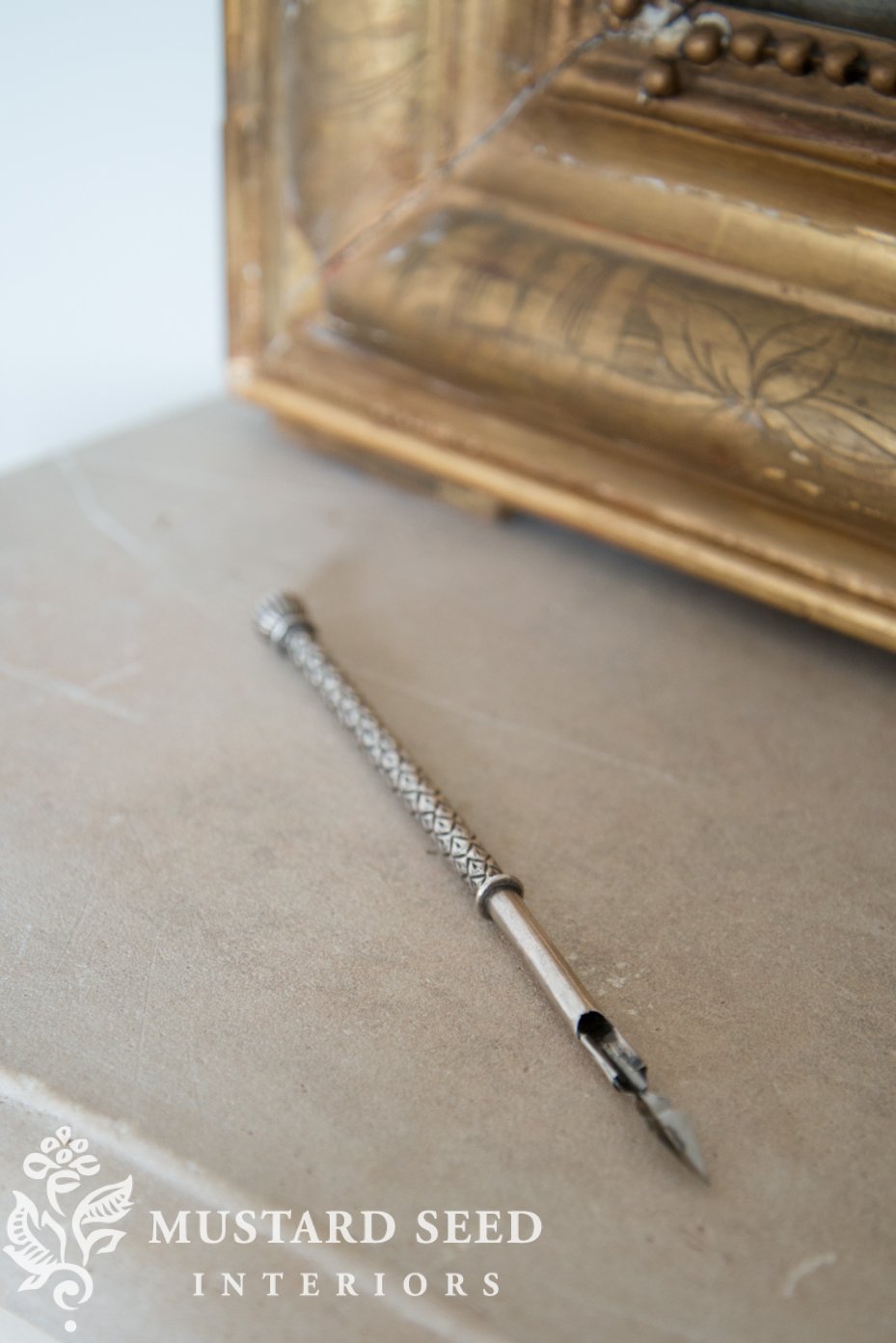 If you want to follow my travels through France and Italy, I am sharing regularly on my Instagram stories.

Disclosure: This isn’t specifically a sponsored post, but the guide and my accommodations were provided by Paris Perfect.  You’ll be hearing more about them in my other Paris posts.