You know that hypothetical exercise you go through every once in a while – What would I rescue from the house if there were a fire, flood, or other natural disasters?  Well, yesterday afternoon, we got to put that hypothetical exercise to the test as we were preparing for high winds and likely tornados in our area.  We’re all safe and sound this morning and spent the night snug in our basement, but there were a few tense moments when the sirens sounded and alerts were echoing on four phones.  And images of those three sisters in Kentucky, seeking shelter in their bathtub shortly before they were taken by a tornado, made me acknowledge that a good outcome isn’t certain.  My heart has been heavy for that community and those families all week, but it was even heavier as all four of us, the two kitties, and Sebastian sat in the playroom, waiting for the sirens to stop and the tornado warning to lift.  Those moments when you’re sure everything will be alright and for them, it wasn’t.  It’s just a reminder of the brevity of life.

But now, I have to laugh at myself for the things that I grabbed to take downstairs.  Level-headedness did prevail in some cases as we carried down Calvin’s diabetes supplies, the file with our passports and birth certificates, the checkbooks, my purse, bottles of water, candles, batteries, and flashlights.  I also grabbed my sketchbooks, a notebook, my computer, camera, and lenses, which all made good sense. But I have to admit to some slightly humorous impracticality as well as I grabbed some of my antique art boxes, silver dip pens, my 1920s typewriter, and an ironstone cake stand.  I knew it was a little silly and it ended up all being unnecessary, but at the moment, those are the things I wanted to save.

All of this to say that I hope you are all well and safe.  I hope we all take the time to appreciate the people and things we are blessed with.

I’m going to take a pause from the Christmas content to offer a bit of encouragement.

It’s easy to feel behind in this season.  To feel overwhelmed and like you’re not doing enough or doing it fast enough or well enough.  As I’ve been sharing decorations and crafts, I’ve read some comments from readers expressing that sentiment.  Comments like, “I need to get my act together” or “I’m just having trouble finding the motivation to get started.”

We all know that Christmas isn’t a competition or a race, but that’s easy to forget when you’re in the thick of things and you feel like you’re somehow losing. 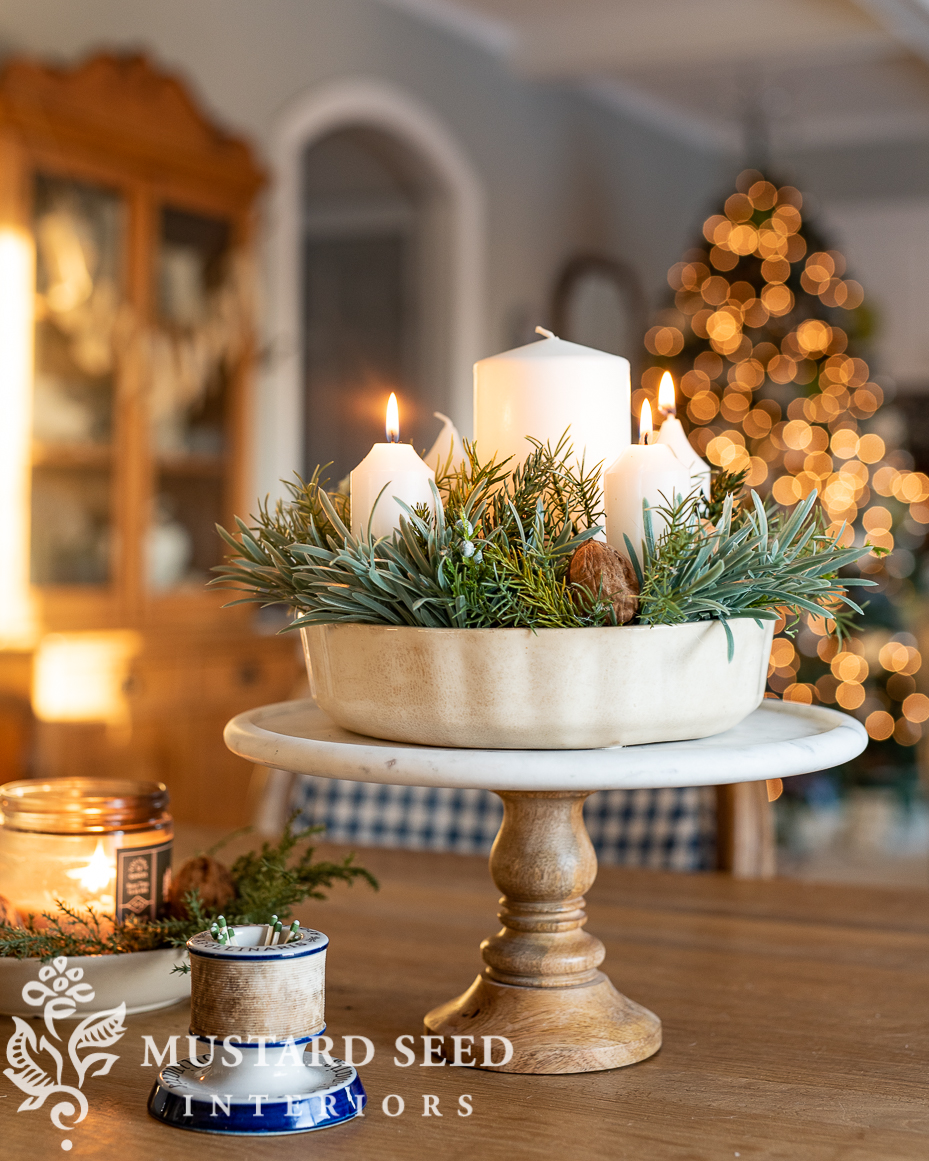 First of all, I want to offer anyone who feels like that a big virtual hug.  The kind of hug that reassures.  My friend, Shaunna, put it beautifully yesterday in her Instagram post.  “This season is yours.  You have nothing to prove.  Nothing to achieve that doesn’t pull at your heart…”

I’m not sharing the things I’m doing with the intention of making anyone feel like they aren’t doing enough.  I’m sharing with the hopes of offering inspiration to those who are seeking it.  But, it’s easy to look for inspiration and inadvertently find discouragement.  While there are many upsides to our connectedness online, that is one of the downsides.

So, if you’re feeling that pull at your heart to do something, but you’re feeling overwhelmed, let me make a suggestion.  You don’t have to do it all.  You don’t have to finish.  You can just start.  Just do what you can do.  Take the easiest first step, whatever that looks like.  Maybe it’s making one batch of cookies for your family instead of dozens of tins to give to friends and neighbors.  Maybe it’s making one Christmas craft you’re really excited about and it’s just for you and your tree.  Maybe it’s just getting organized for when you’re ready to work on the project you feel pulled to.

Such was the case with embroidery for me.  I’ve been buying floss, thread, needles, and all sorts of supplies for months.  I’ve bought books for inspiration and instruction.  And I’ve even done a few projects here and there.  But, I realized I was hung up on one thing – the hanks of thread got tangled when I tried to work directly from them.  I needed to wind them onto cards or into balls, so I could use them easily.  It’s a small stumbling block, but it was still tripping me up.  It turns out, that was the easiest first step. 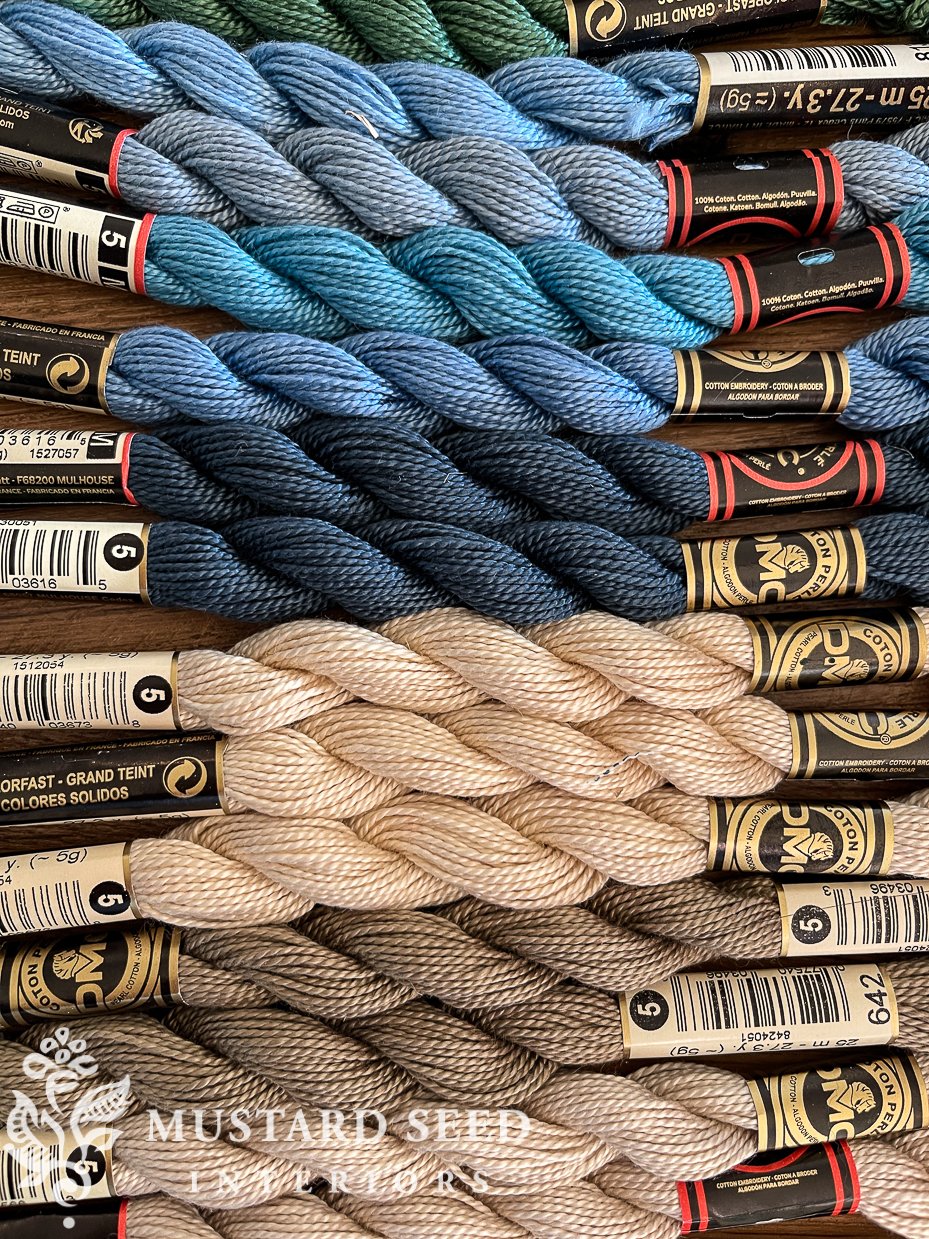 So, over Thanksgiving, I took a little bit of time on a quiet afternoon and wound the hanks onto cards… 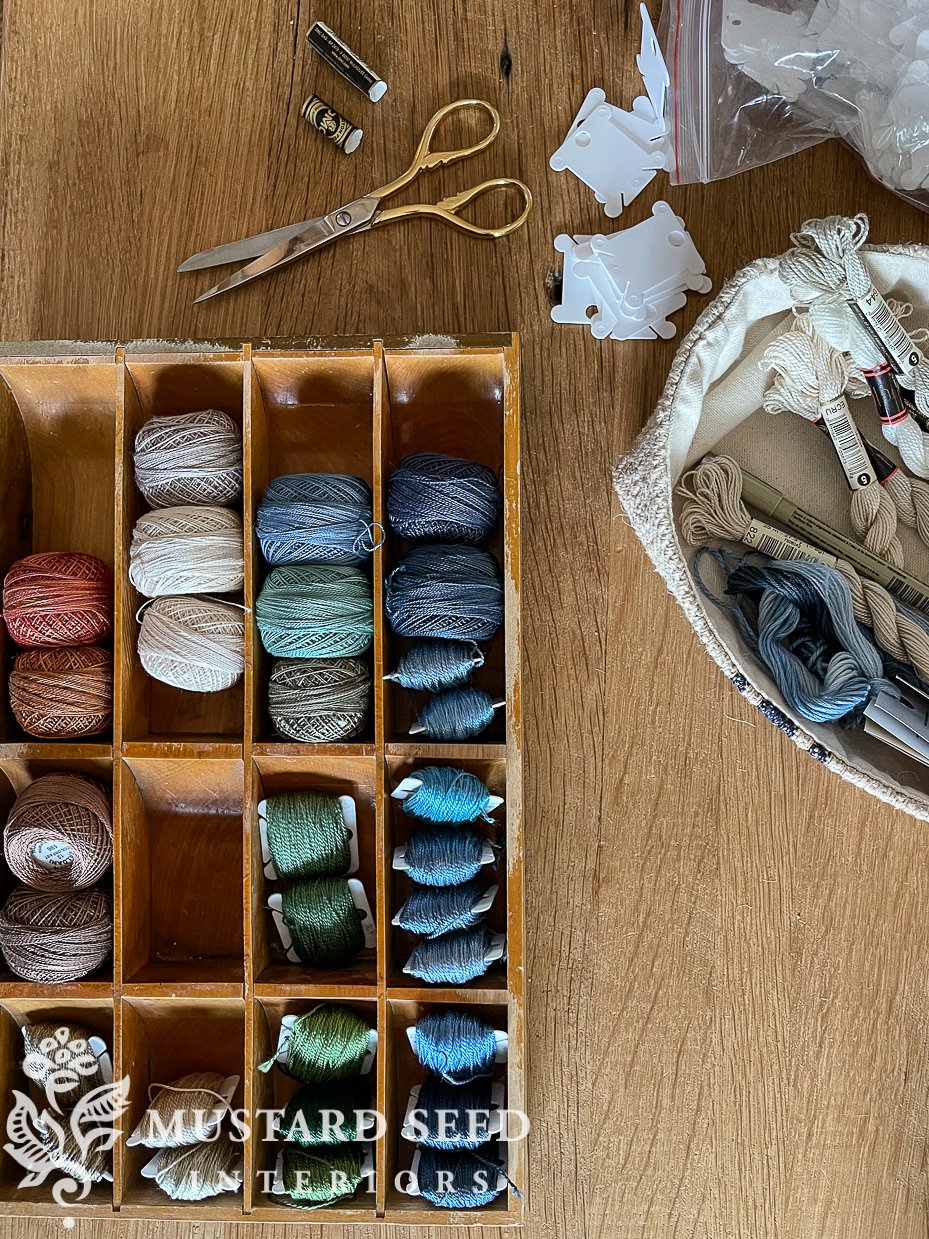 And I organized them in one of my cash drawers from the antique post office register I bought this fall.  And just that simple step got me ready for when I was ready.  I didn’t have to start right then, but that drawer of organized thread would be there waiting. 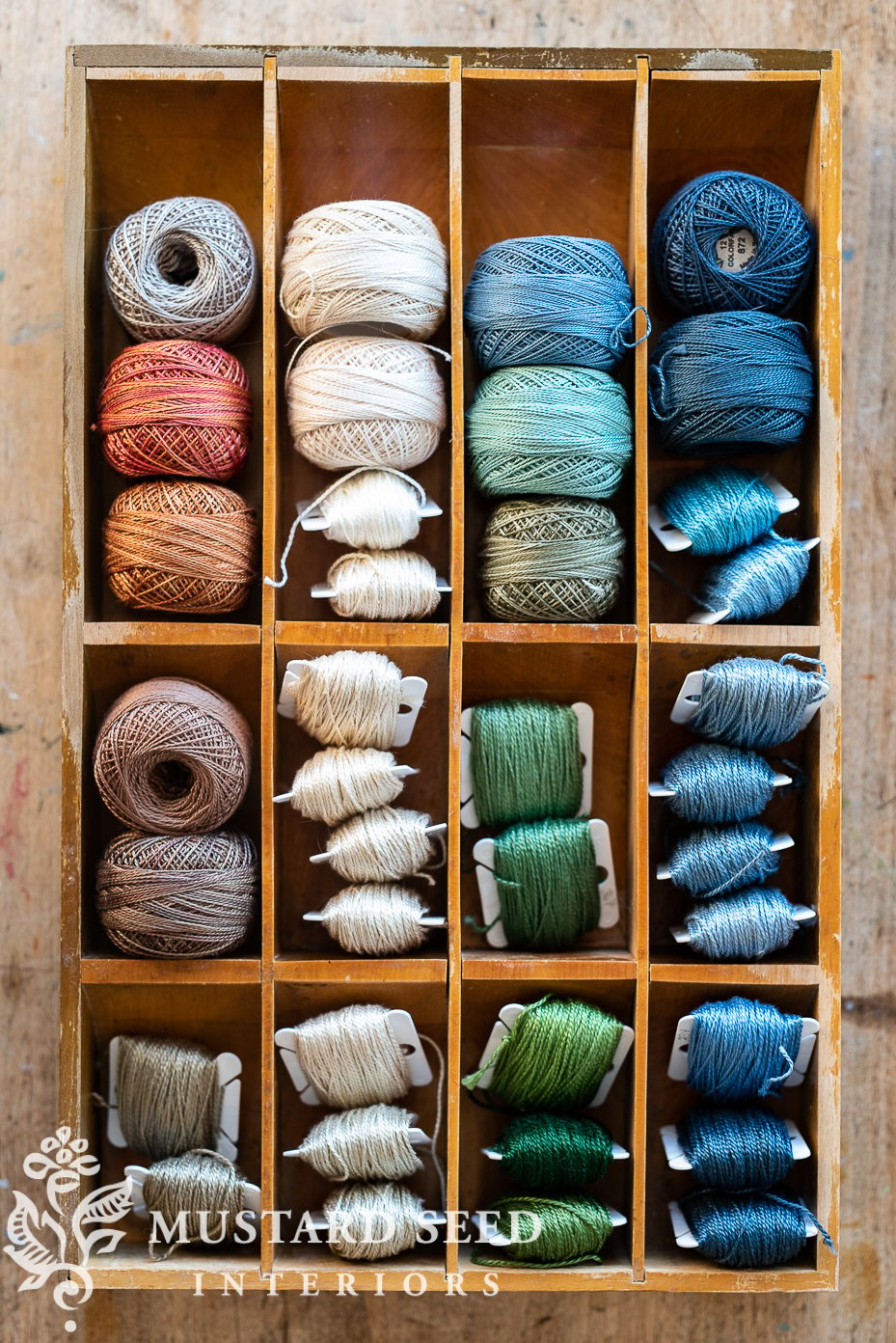 That simple first step propelled me into doing some embroidered felt ornaments and working on other little needlework projects.  It made starting a project easier. 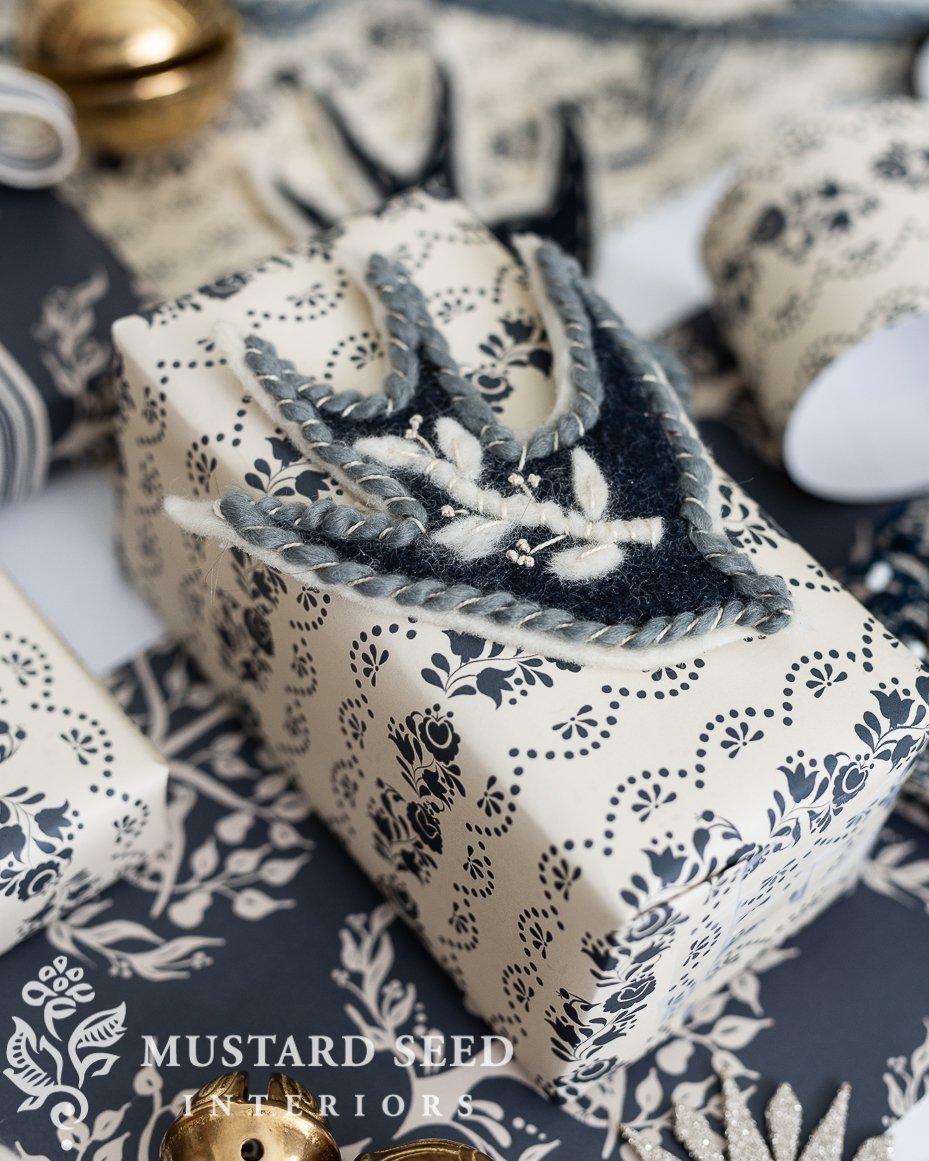 So, now, I’m excited about working on other embroidery projects over the Christmas break and actually learning some real embroidery stitches beyond running and blanket stitches.  I’ve recently discovered antique sewing notebooks that schoolgirls would make as they learned their stitches in class.  I was able to buy a small set from 1902 and 1904 by Georgia Smith of the Winslow school… 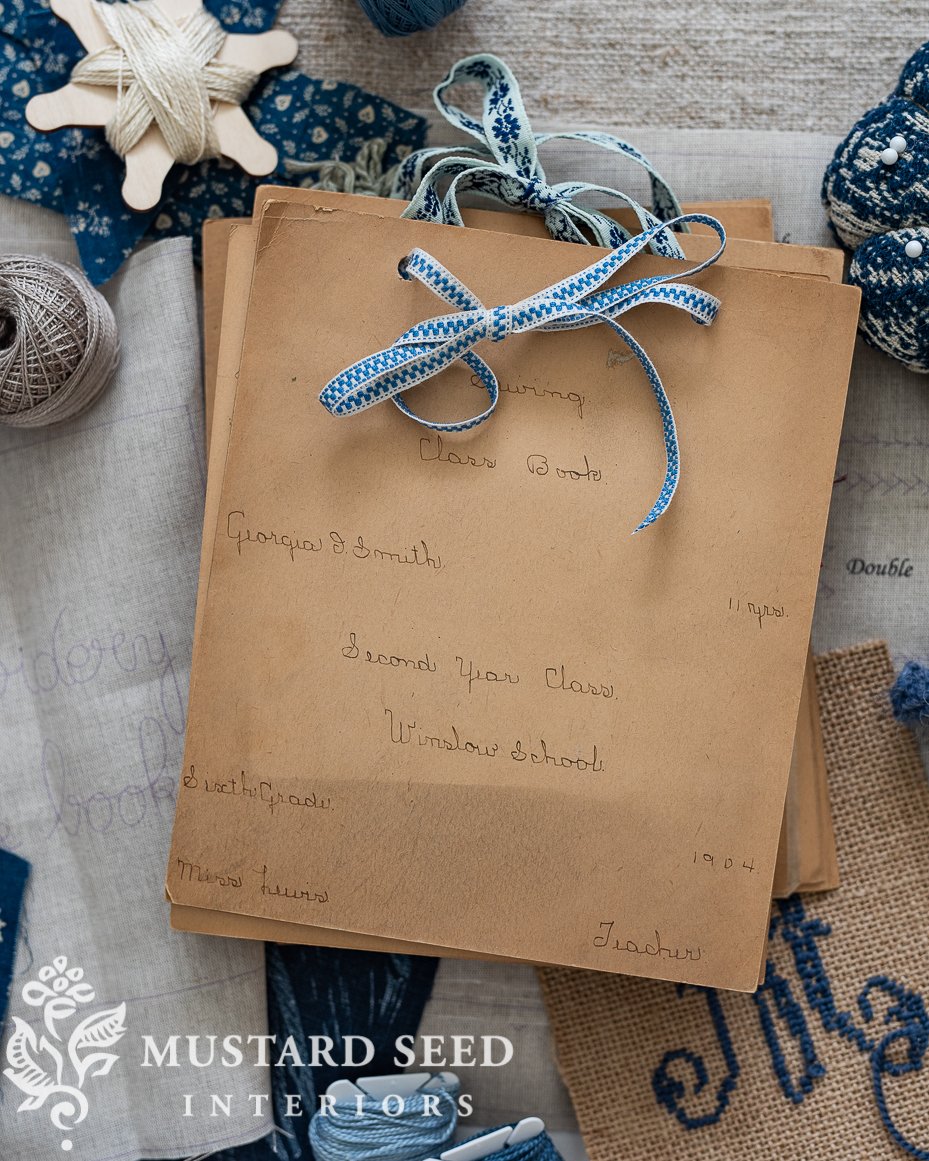 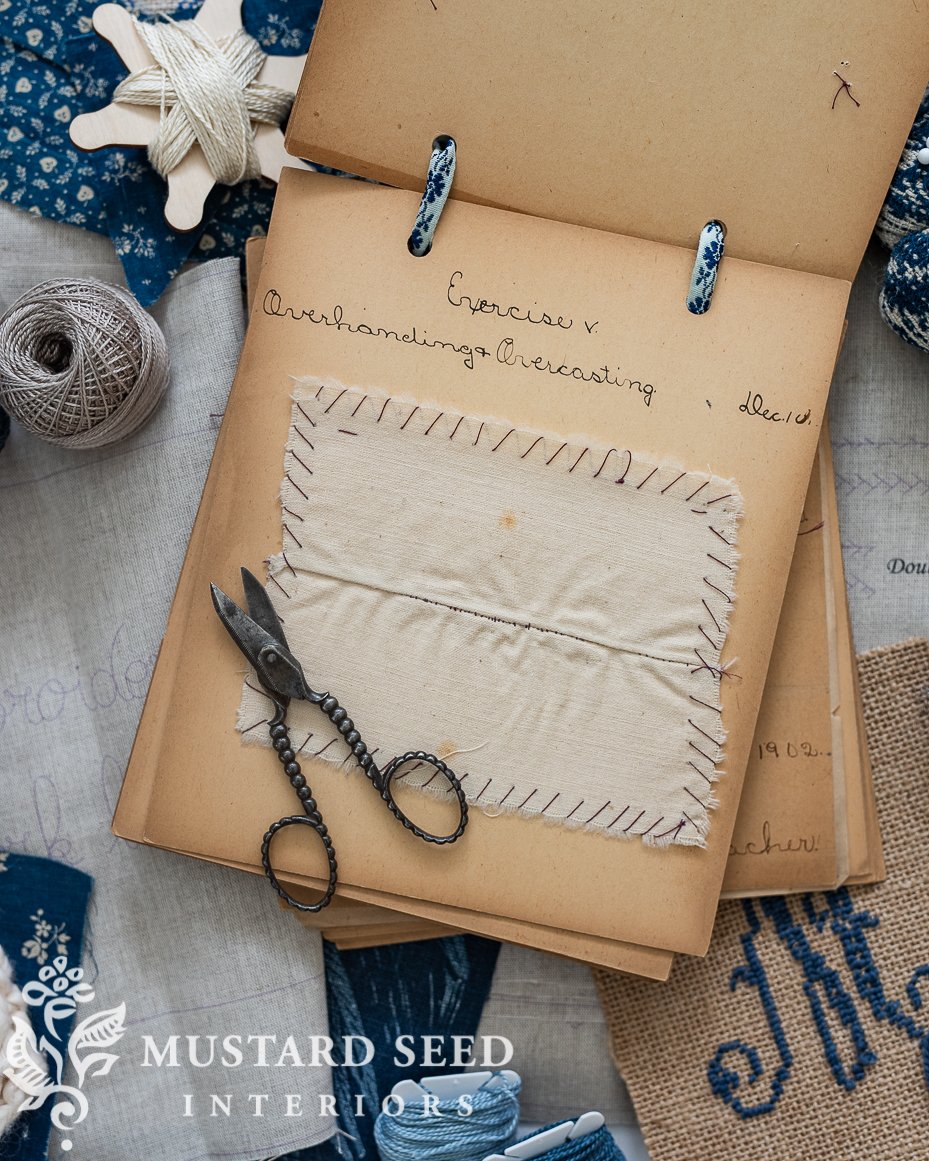 There are some spectacular ones with miniature clothes and darning samples, but these books by Georgia are so sweet.  I have decided I want to make my own to learn, so I found that French General sells a kit to make one!  Of course, I’m replacing the red thread with my signature blues, but I’m excited about making it and learning. 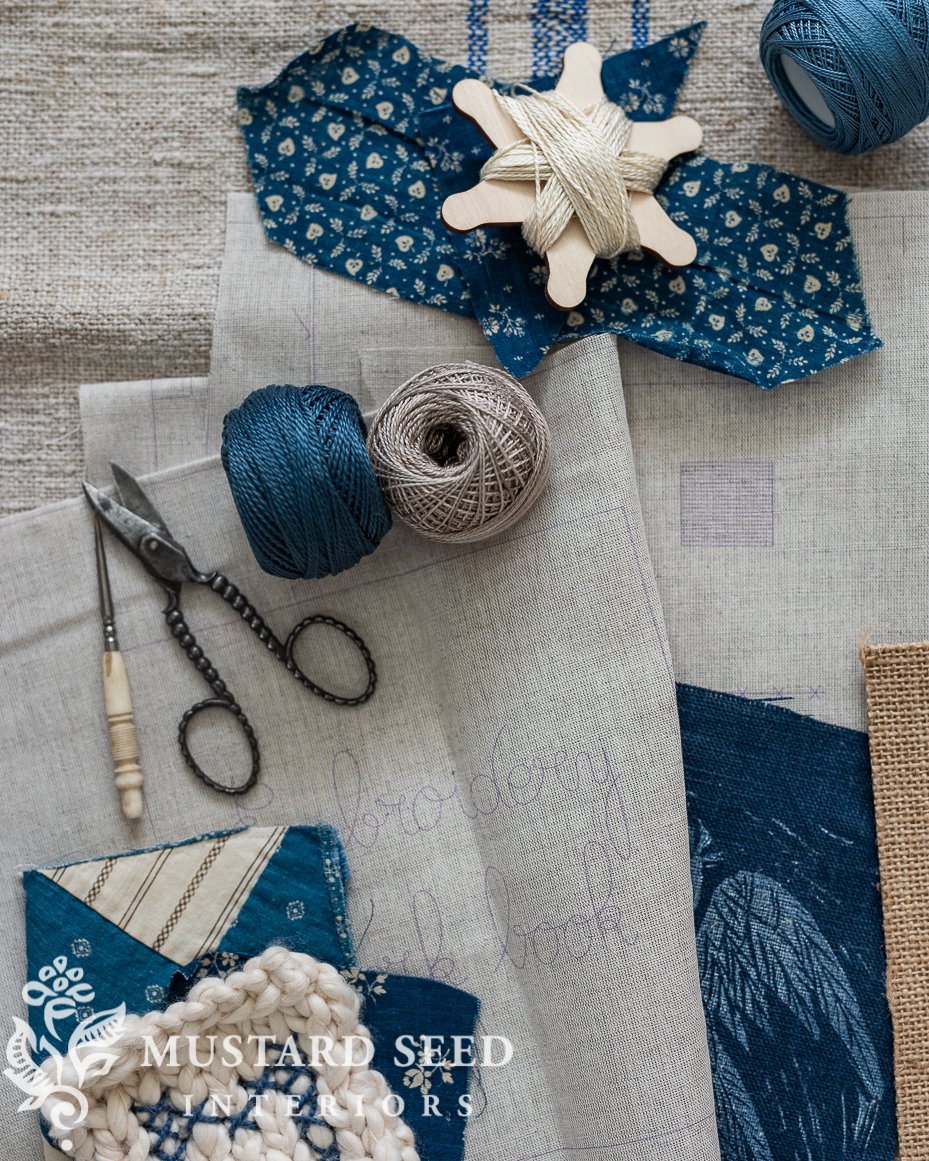 This is more of a personal pet project, but who knows what I might do with it.  It’s just a first step.

Speaking of embroidery, some of you asked to see the felt fox ornament I made, and here it is… 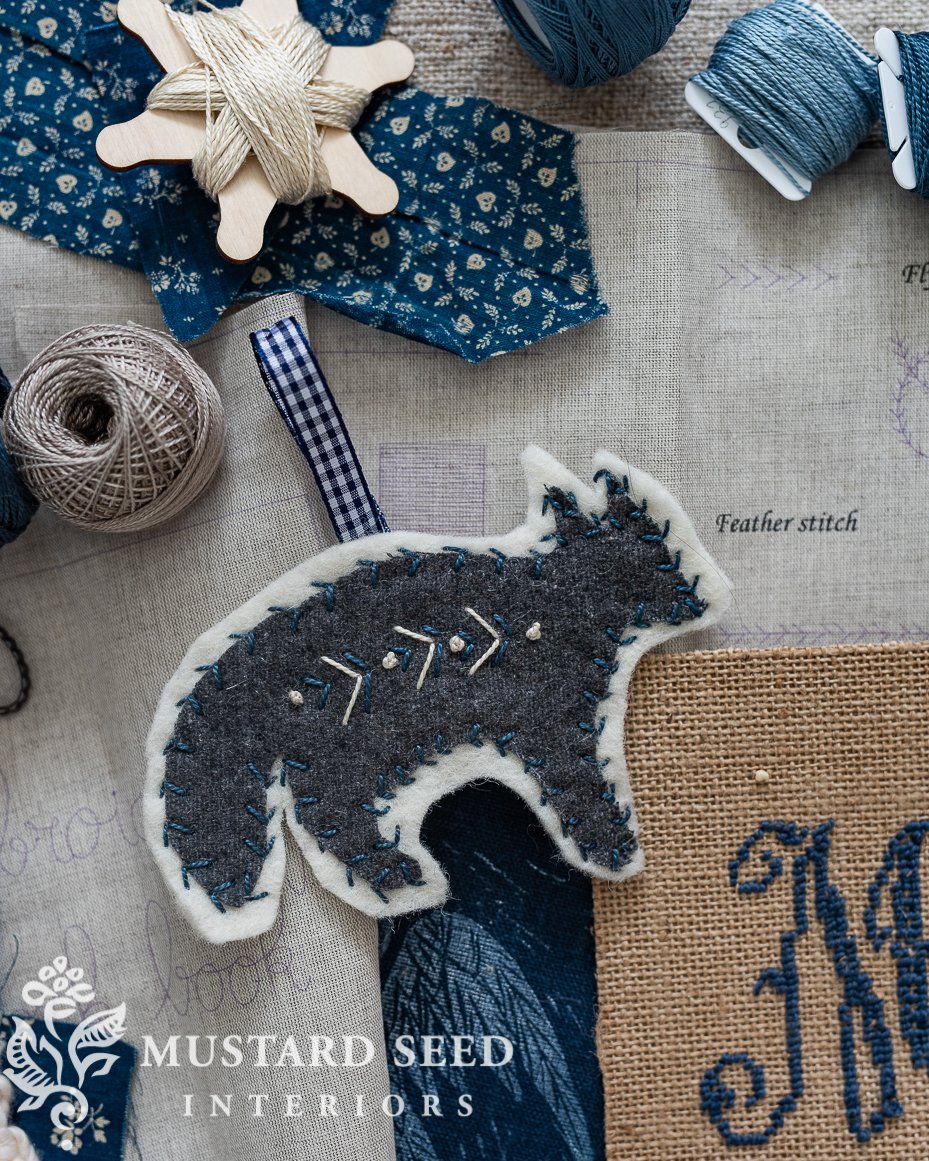 So, what is the easiest first step you can take to do something you feel pulled to?