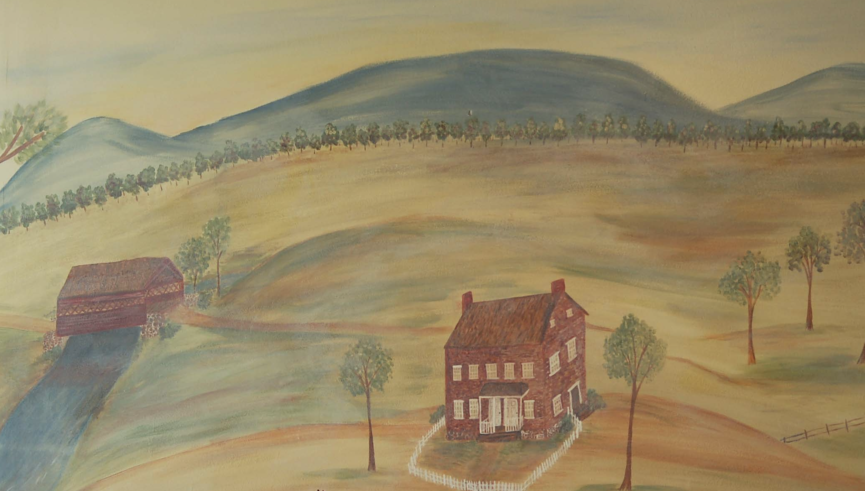 A part of organizing this month has been scanning old documents and photos (I’ll share more on that in another post) and uploading old photos that were saved to a disc to an external hard drive.  At first, I didn’t even know if I had a way to scan a disc onto the drive!  I remembered that we had an external disc scanner, so I was able to get everything uploaded.  While photos and videos were uploading, I worked on organizing some of my computer folders.  Oh, man!  I need to do some serious sorting on my computer.  At first glance, it’s pretty organized…everything is in folders, my desktop isn’t cluttered with a bunch of documents, but my photos are all over the place!  It’s from years and years of taking thousands of photos.  So, I’ll slowly chip away at that when I have the time.

Anyway, as I was sorting, I can across the photos of the first large mural job I did when I started my business back in 2008.  I shared about this project years and years ago, but I thought it would be fun to share it from my 2021 perspective.

First of all, the project was a big one and I cannot even believe I agreed to do it!  I had never done anything like it before and the closest thing was a nursery mural I helped on my own house.  I only did the background and my talented friend painting the feature.  I was tenacious, though, and willing to just go for it.  Yes, put paint all over the walls of a home that was used as a hospital during the Civil War.  Don’t mind me, brand new business owner and muralist…

Anyway, I did some sketches for the family and they liked my ideas, so I landed the job.

I used murals by Rufus Poter as my inspiration.  It seemed fitting for the home and I was more comfortable painting in a folk-art style.  Over the mantle, I painted their home as it looked during the Civil War… 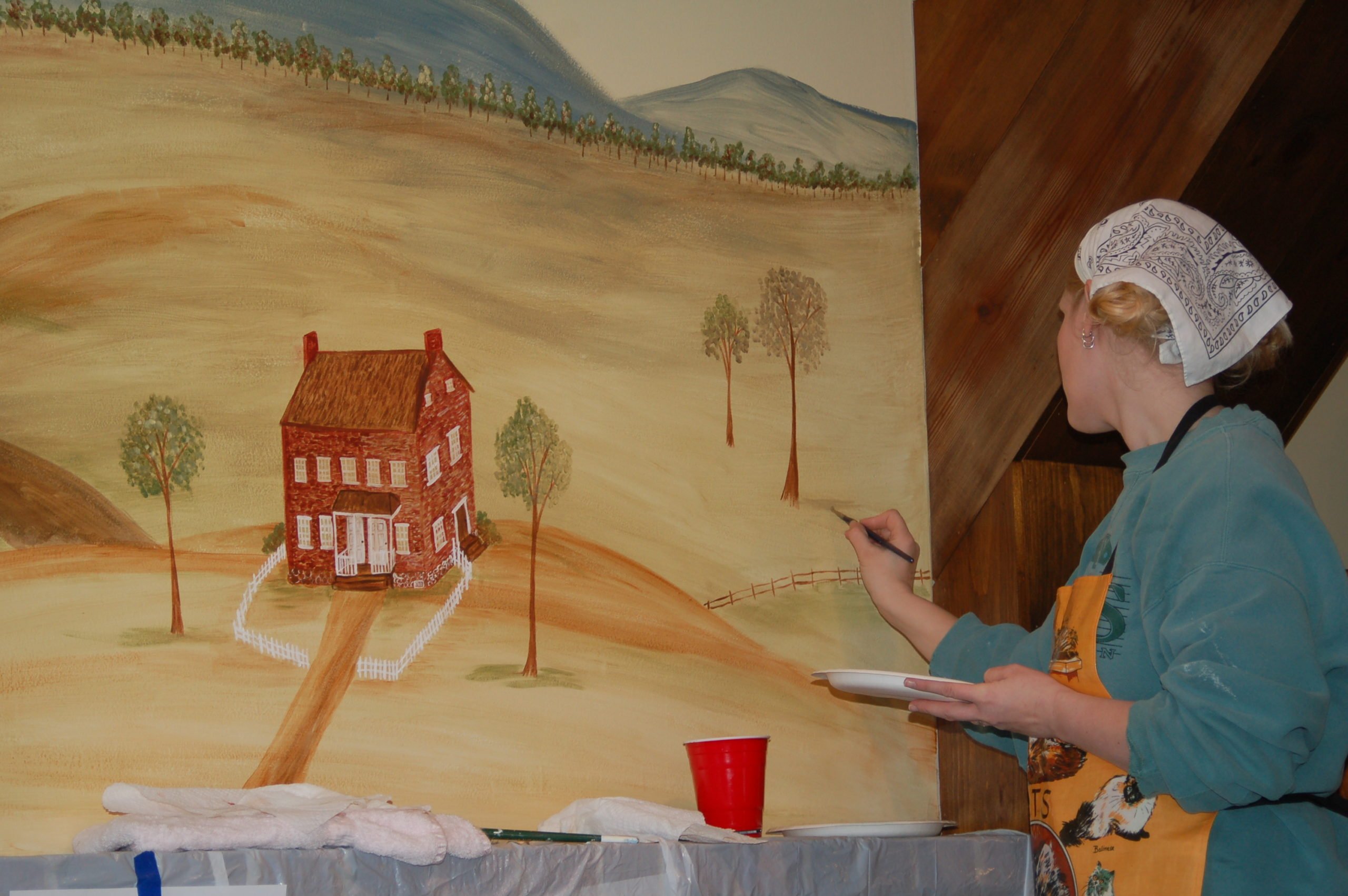 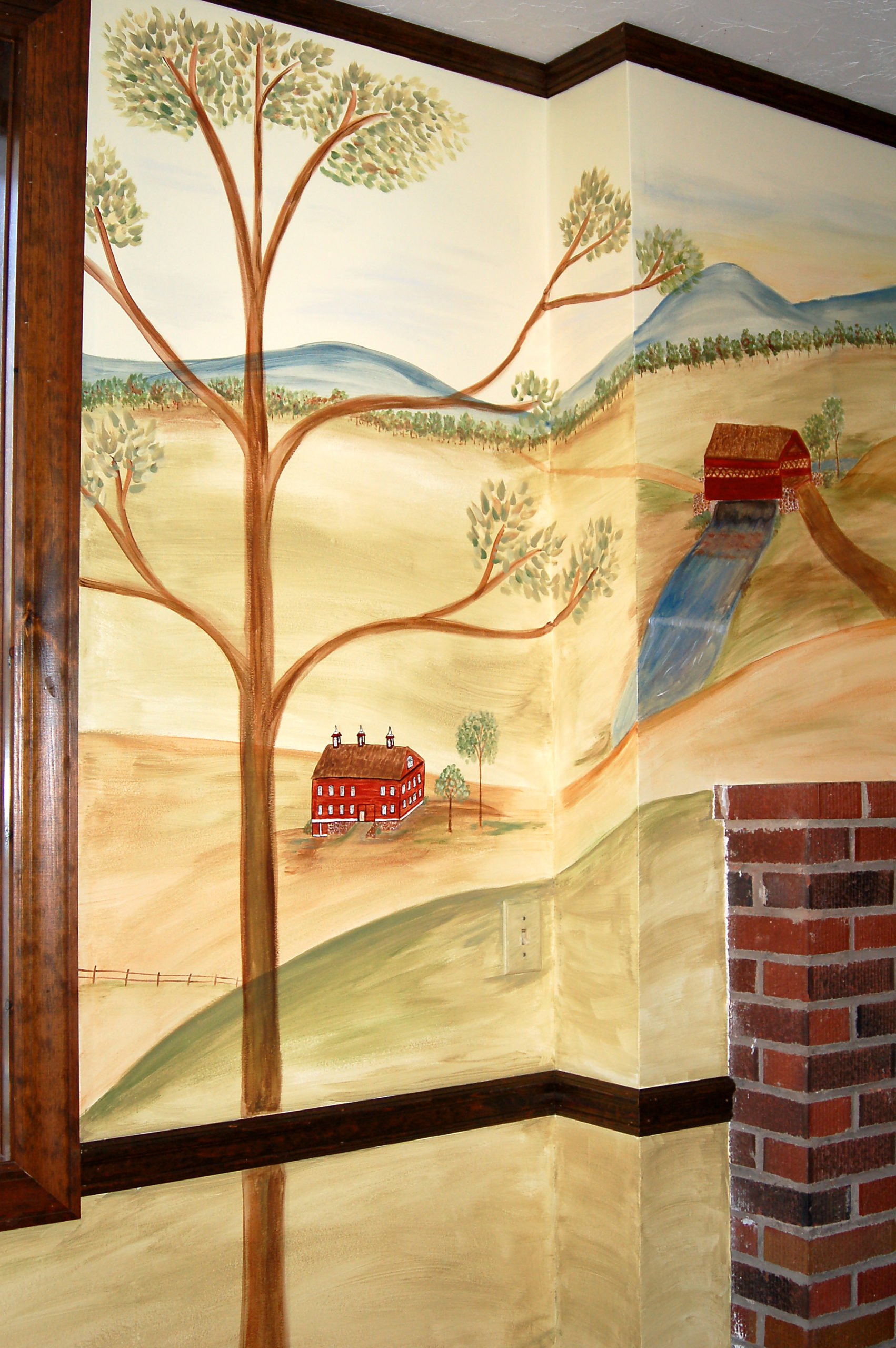 …a covered bridge near their property, and two famous barns in Gettysburg – the Codori and McPherson barns. 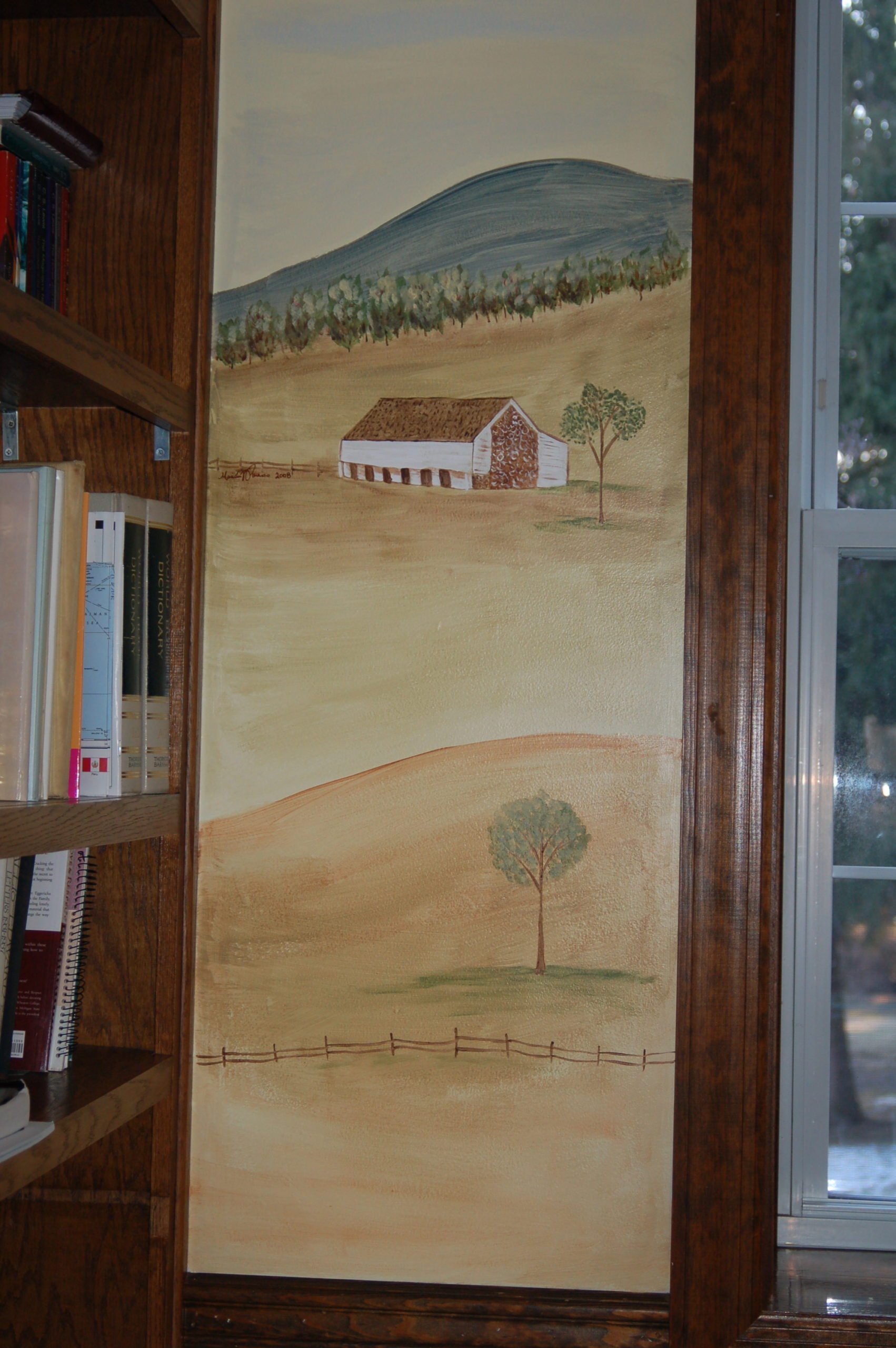 Here is how the finished mural looked after I applied a wash of the pale yellow wall color to soften the brightness of the paint and make it look a bit faded. 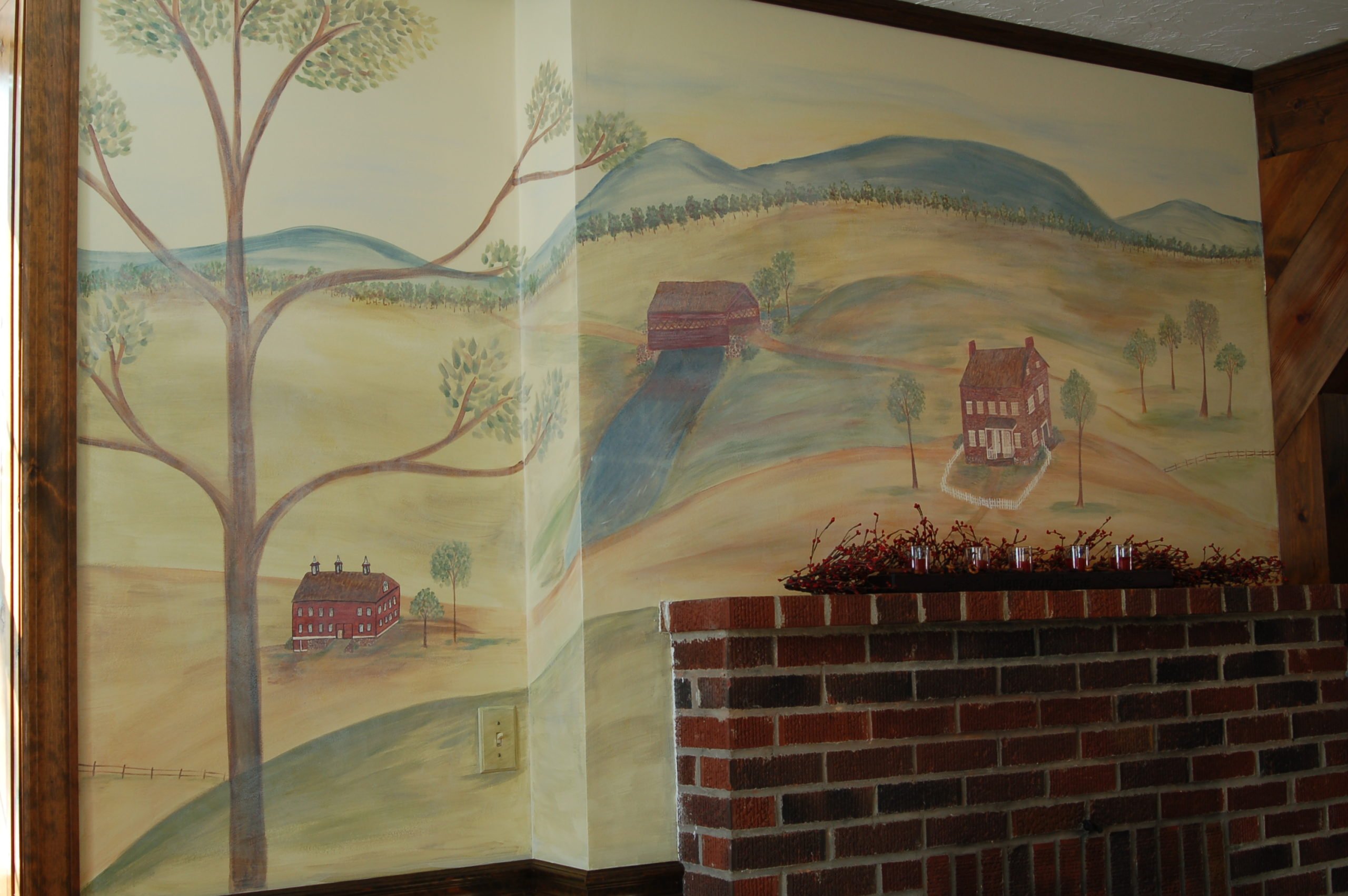 Of course, I want to hop into the photos and fix things!  Let’s add some more leaves, Marian, work on the perspective of those buildings, and fix the shape of those hills! 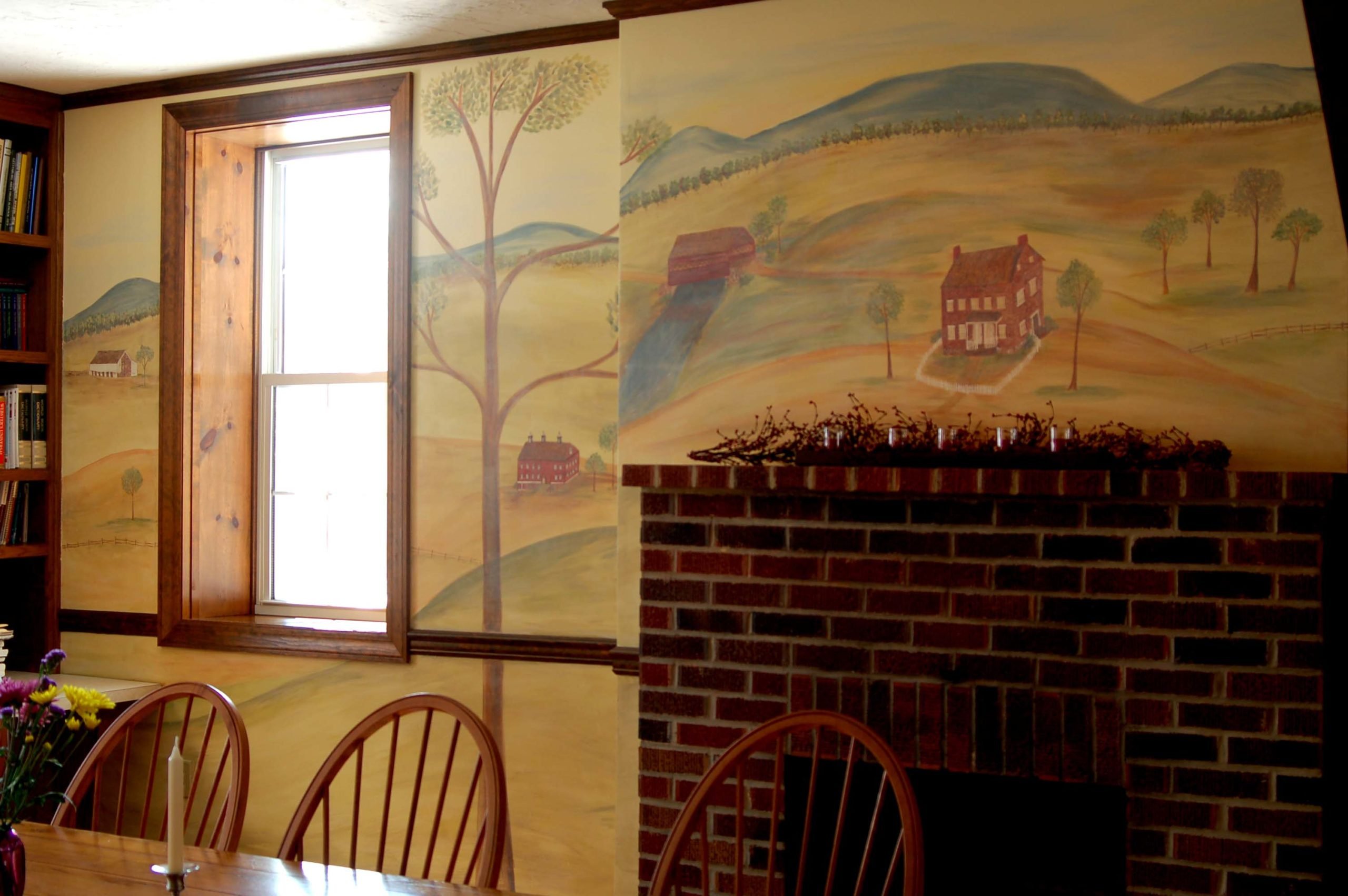 Looking at that mural, I can see how 10-years later it led to the mural in my dining room. 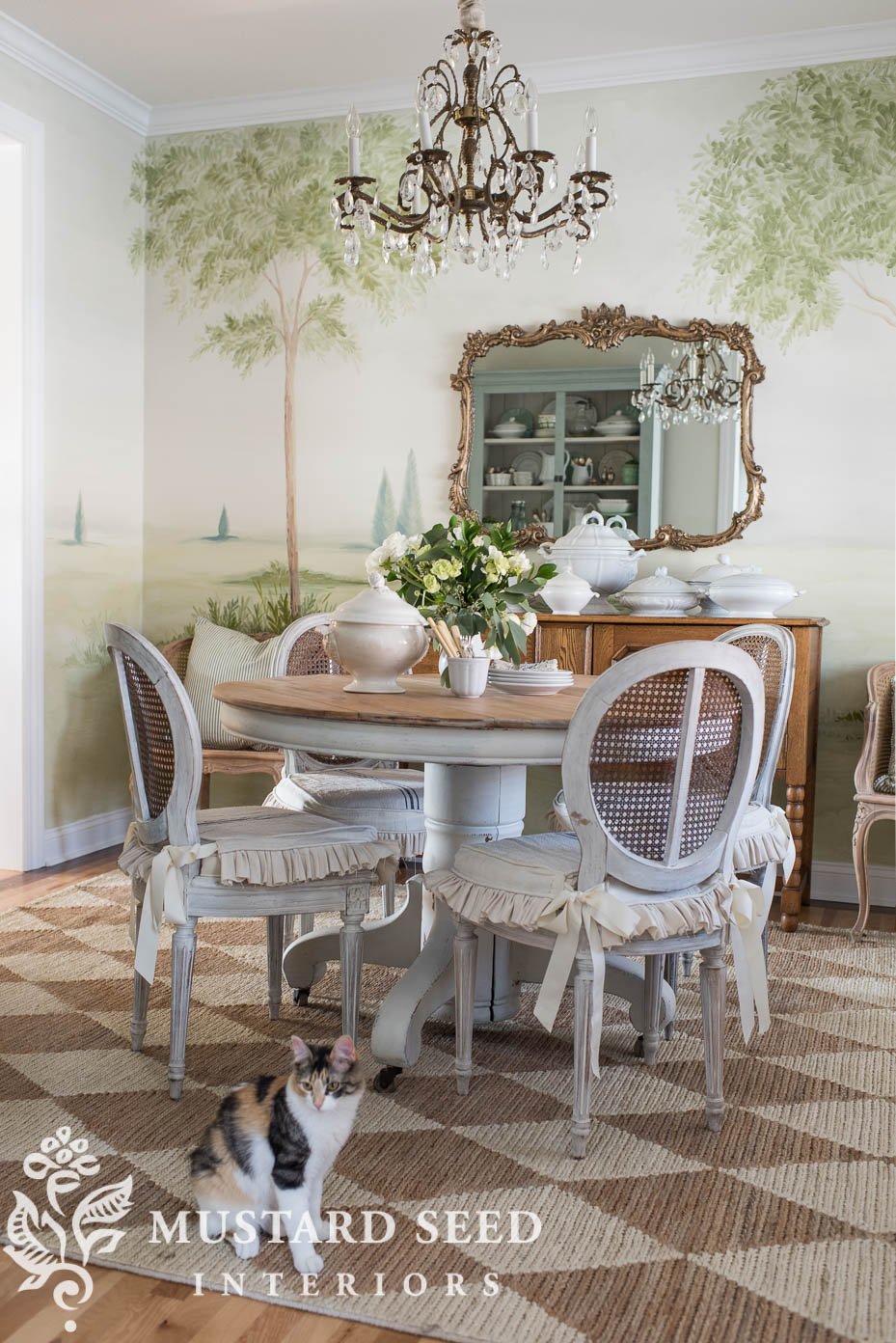 After the high of that completed mural and my first big paying gig, I decided to try painting on canvas.  I painted two barns and (oh my, I can’t even believe I did this) I submitted them to a local art show for adjudication.  I can feel the embarrassment swelling in me even as I type this!  At the time, though, I viewed it as a way to connect with other creatives and approached it with a why-not attitude.  I didn’t have any hopes of winning and knew my paintings would be painfully amateurish against the other works in the show, but I was willing to give anything a try. 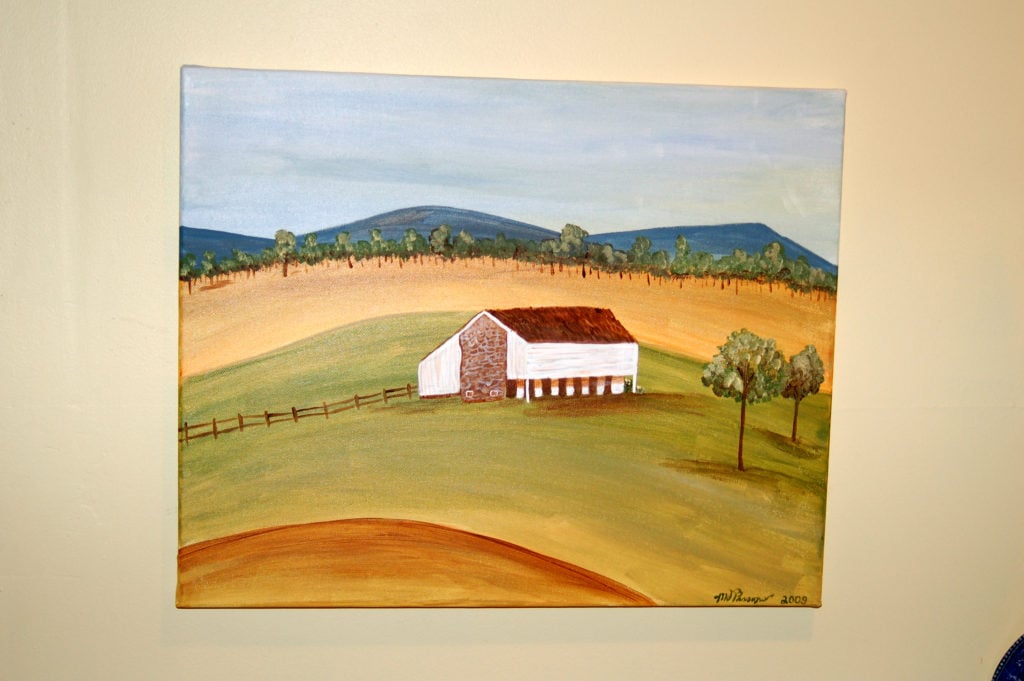 To complete the circle of the story, the paintings didn’t win anything and they didn’t sell.  I took them to sell at the small consignment shop where I sold my hand-painted furniture and accessories and they didn’t sell there, either.  I decided that I was not the kind of artist who painted on a canvas and I should just focus on furniture.  I ended up putting them in an auction and who knows where they ended up.  Maybe the trash, maybe a thrift store, maybe on someone’s wall.  Maybe another artist painted right over them.  Maybe they’ll resurface one day. 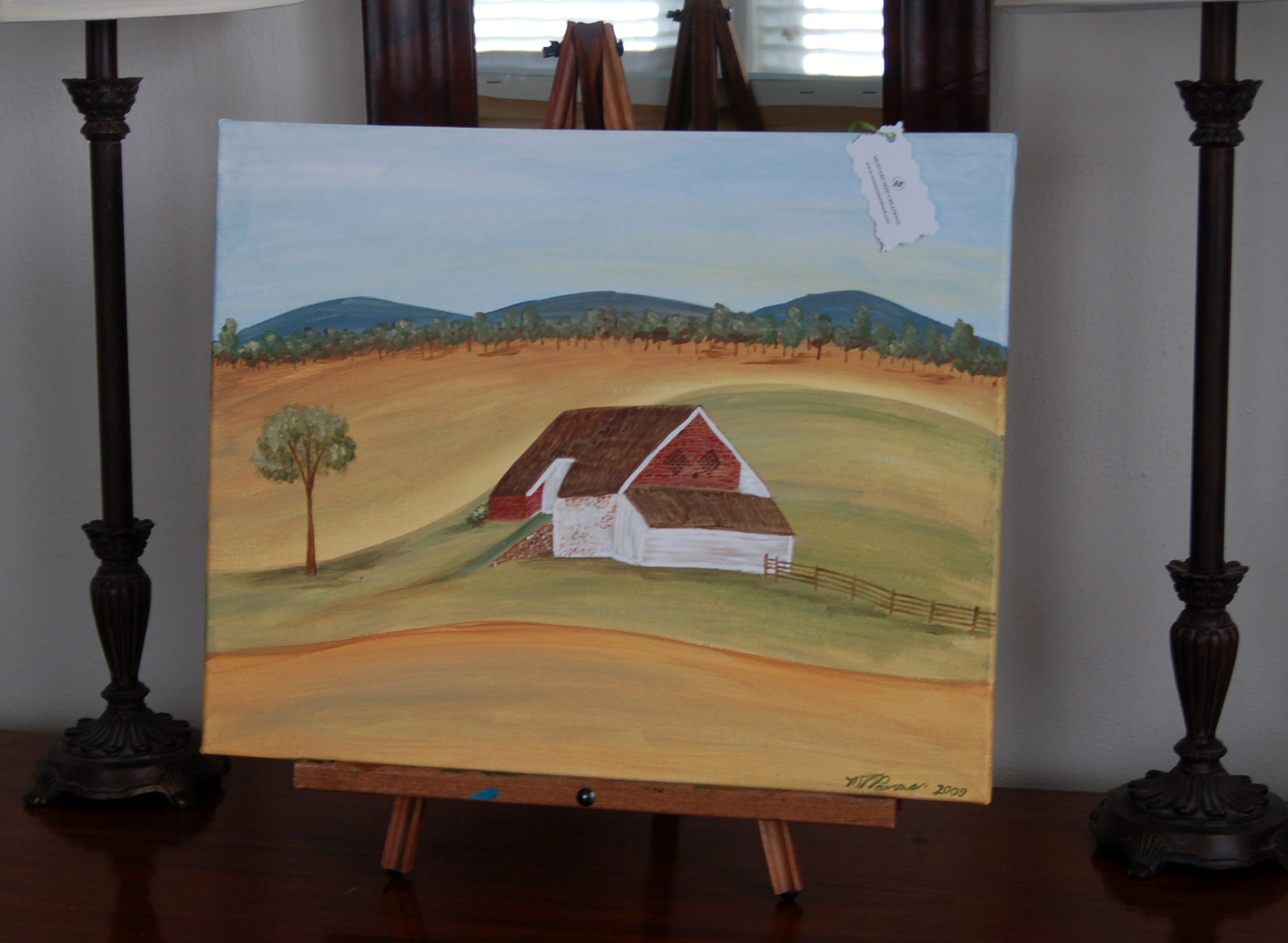 I share all of this because it might be entertaining and interesting to those who haven’t followed my blog from the beginning, but also as an encouragement.

I decided I wasn’t going to be a “real artist” after two paintings.  Two.  I decided I was bad and no one would buy anything I painted on a canvas again.  I would always dream about it, imagine myself painting a landscape at an easel, but those two paintings were a deterrent for years.  The next time I tried painting on canvas, I committed to 100 paintings, knowing practice would be the best teacher.

My most recent sale of paintings sold out in minutes.  I just needed a lot more practice, study, and time to develop.

I’m glad I found these photos, documenting the early years of my business and my journey of discovery as an entrepreneur and artist.  And I hope, to whoever needs it, it gives you some motivation to persist… 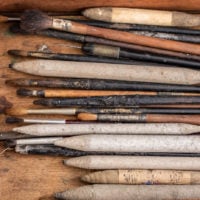 charcoal, a glass dip pen, and a Victorian watercolor box… 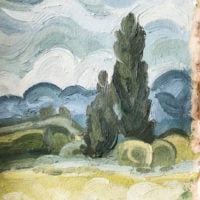 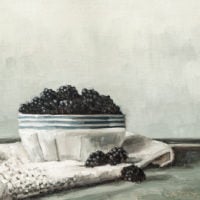 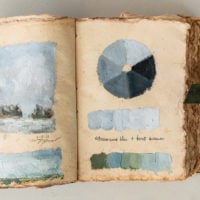