A few years ago, some friends from our church brought over a container of…I didn’t even know what to call it.  Was it a side dish?  A salad?  A snack?  A hot or cold cereal?  But you don’t ask those kinds of questions when someone is offering you a homemade gift.  What they did say was this was a family favorite and some members of their family like it with maple syrup – pomegranate barley salad.

When I opened the lid of the container, I took a visual inventory of all of the ingredients…  barley, pomegranate seeds, chocolate chips, and walnuts.  Hmmm…okay.  Interesting.

I got a spoon out of the drawer and tried it.  I wasn’t sure if I liked it at first.  The contrast of textures and flavors wasn’t something I had ever experienced.  But, I kept going back for more and I realized that I really liked it!

Since then, I have made this dish a few times myself and I still don’t really know what it is other than that it’s tasty.  Since I eat it cold and without maple syrup or honey, let’s just call it a Barley Pomegranate Salad. 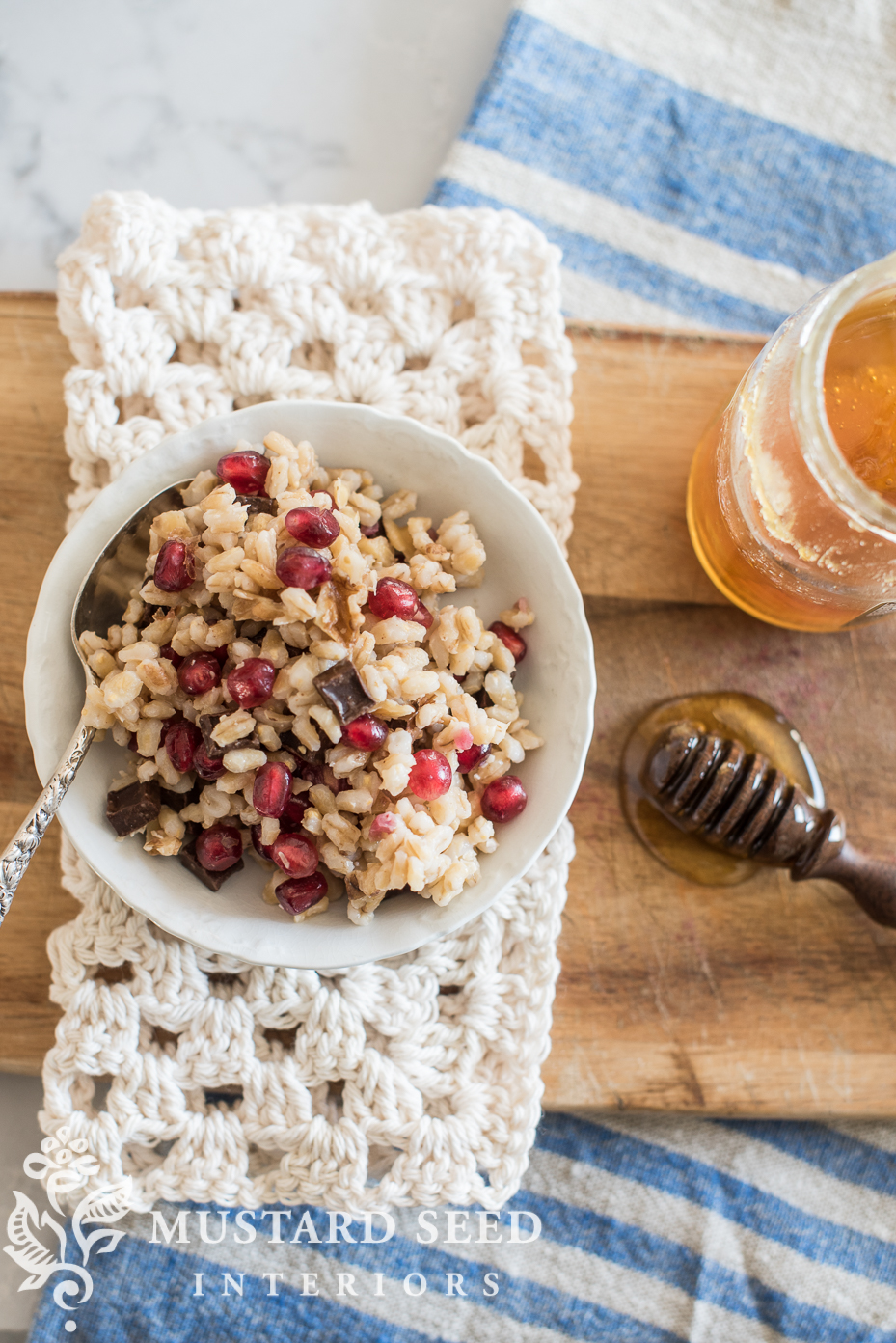 One thing I like about this pomegranate barley salad is that it’s simple to make, relatively quick (the most time-consuming part is cooking the barley), and it’s full of goodness.  I don’t know all of the nutritional details, but I’m sure antioxidants are involved! 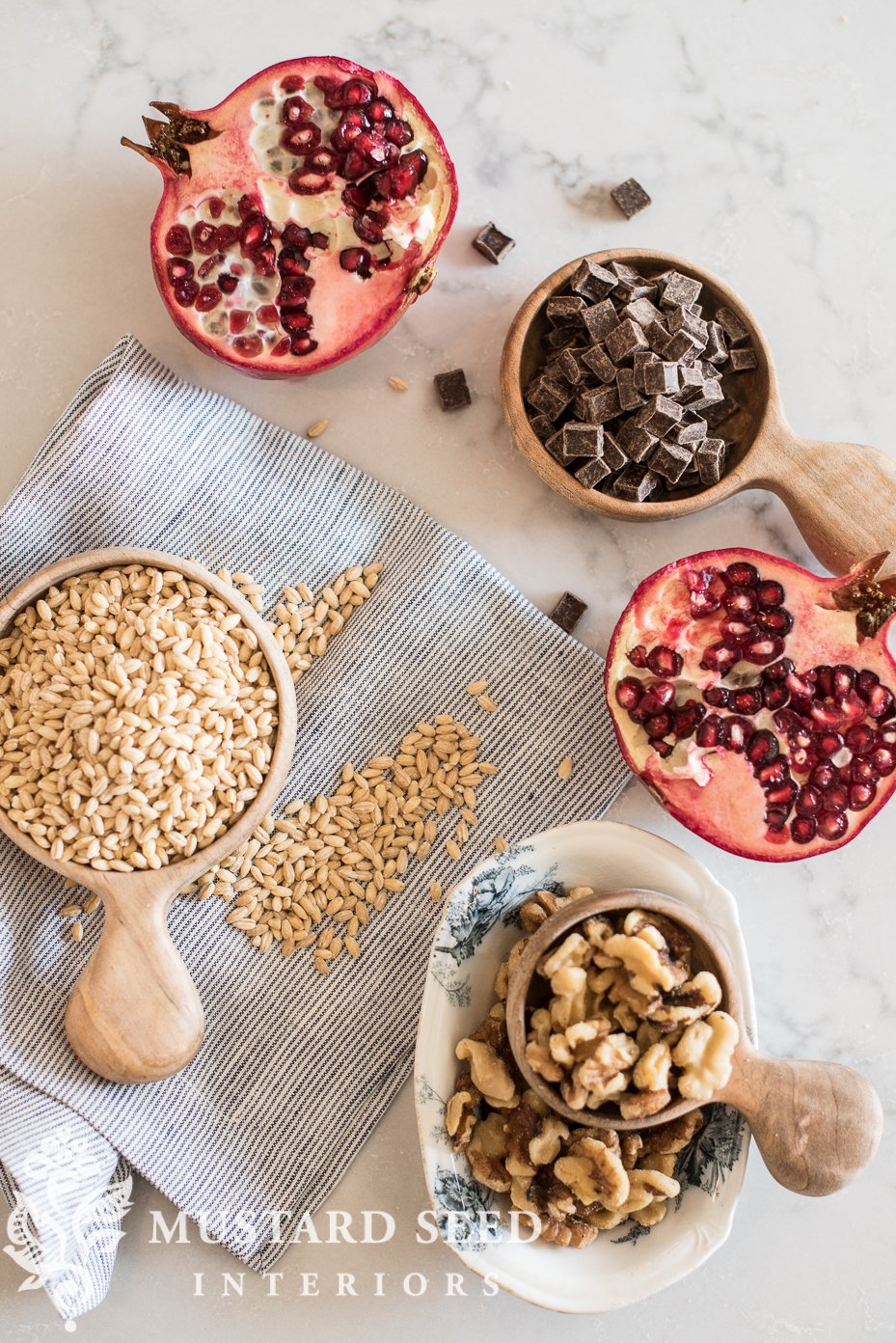 (The scoops are the wooden measuring cups from Polder’s Old World Market.  Scroll to the bottom of this post for more details and a 25% off code.) 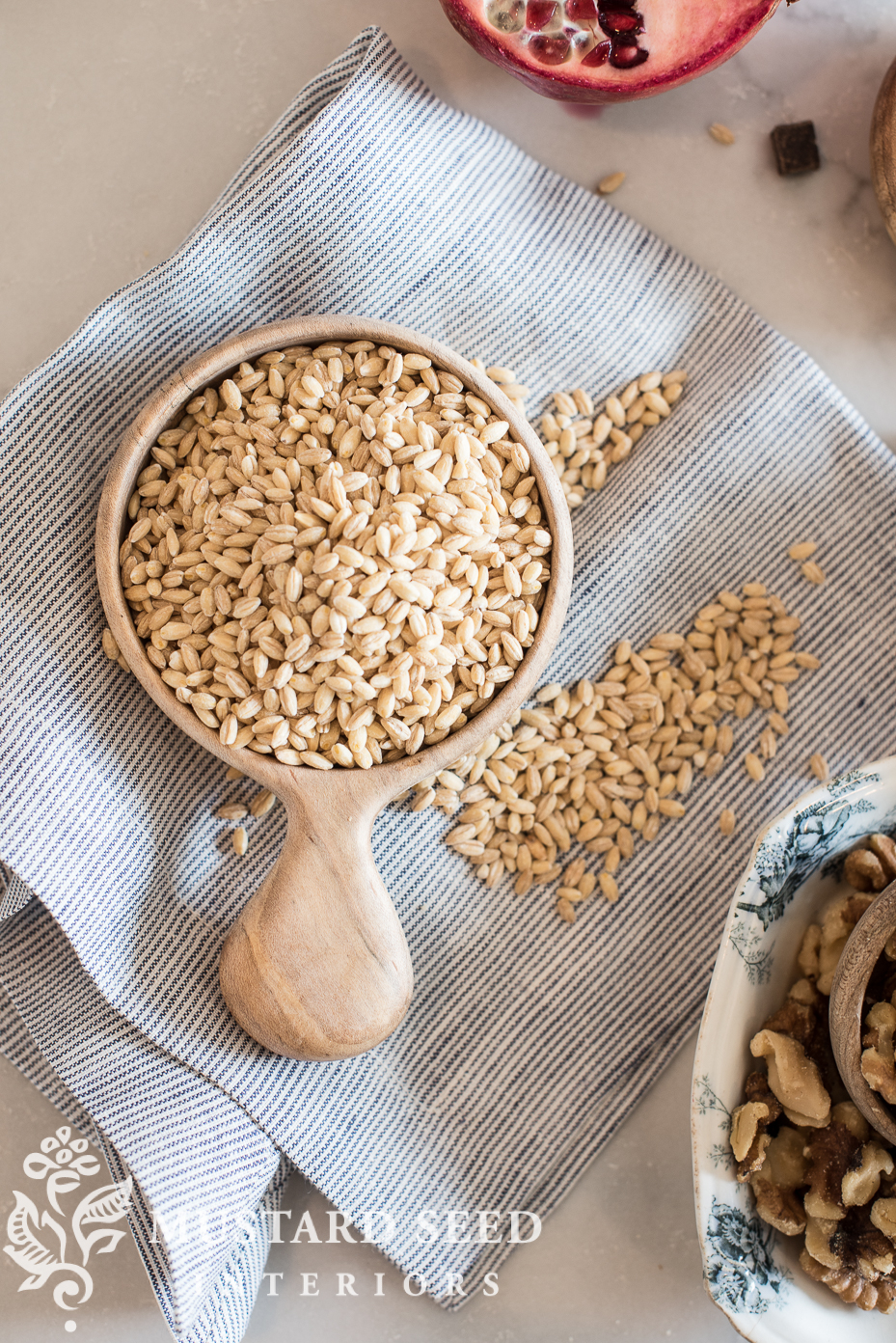 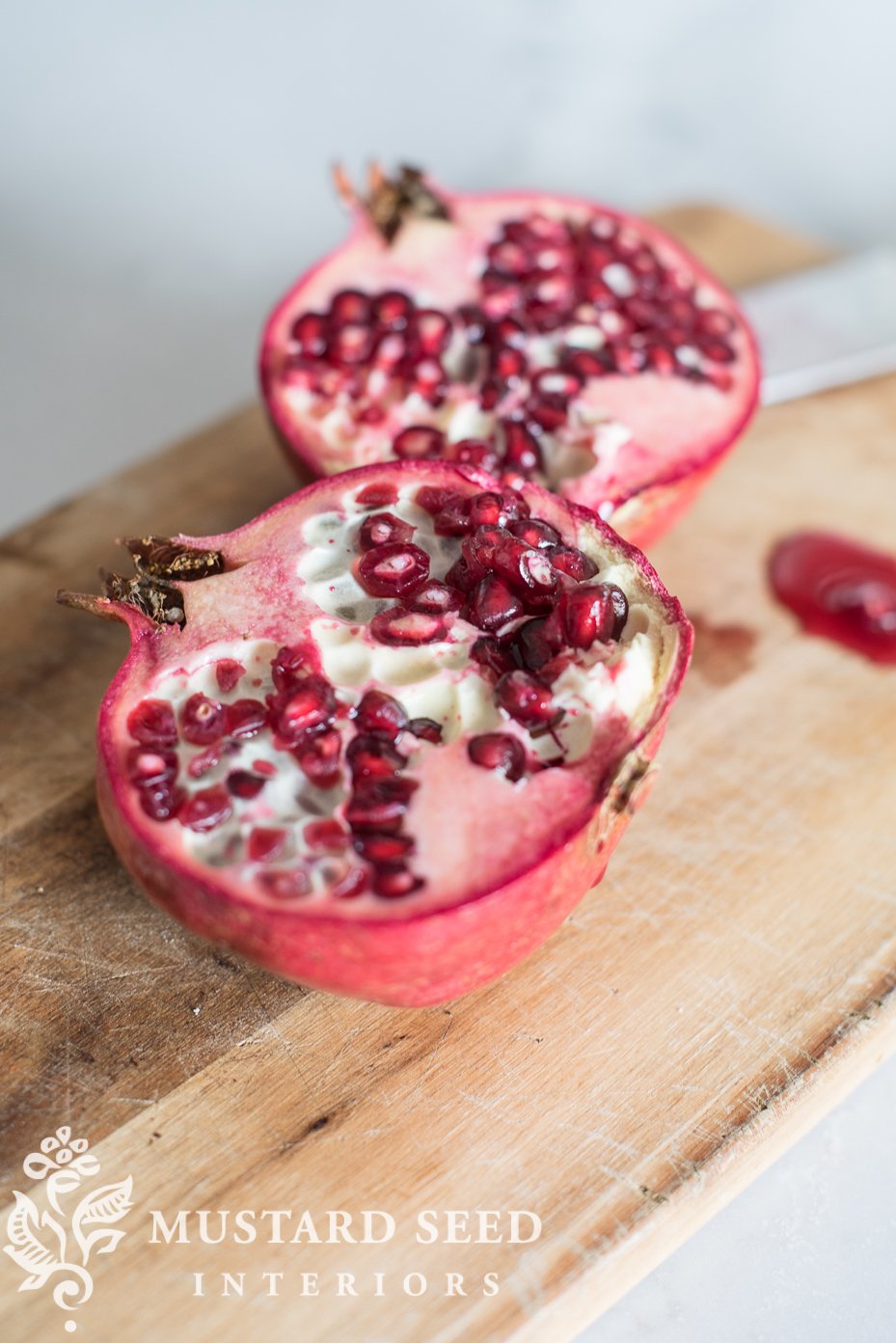 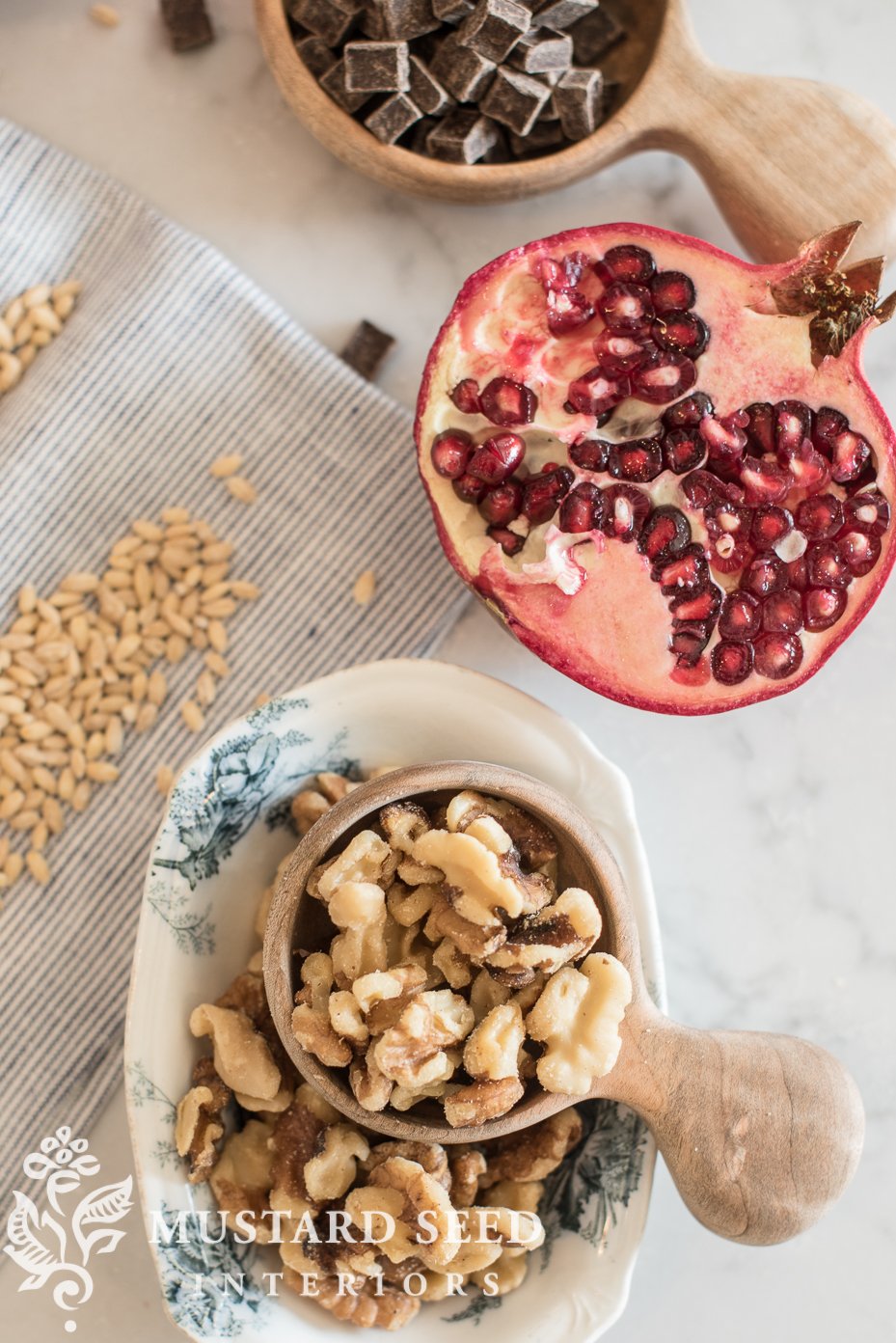 We’re still working with kitties not being on the counter!

I use dark chocolate chips for this pomegranate barley salad, but you can definitely use semi-sweet or sweet if that’s your preference. 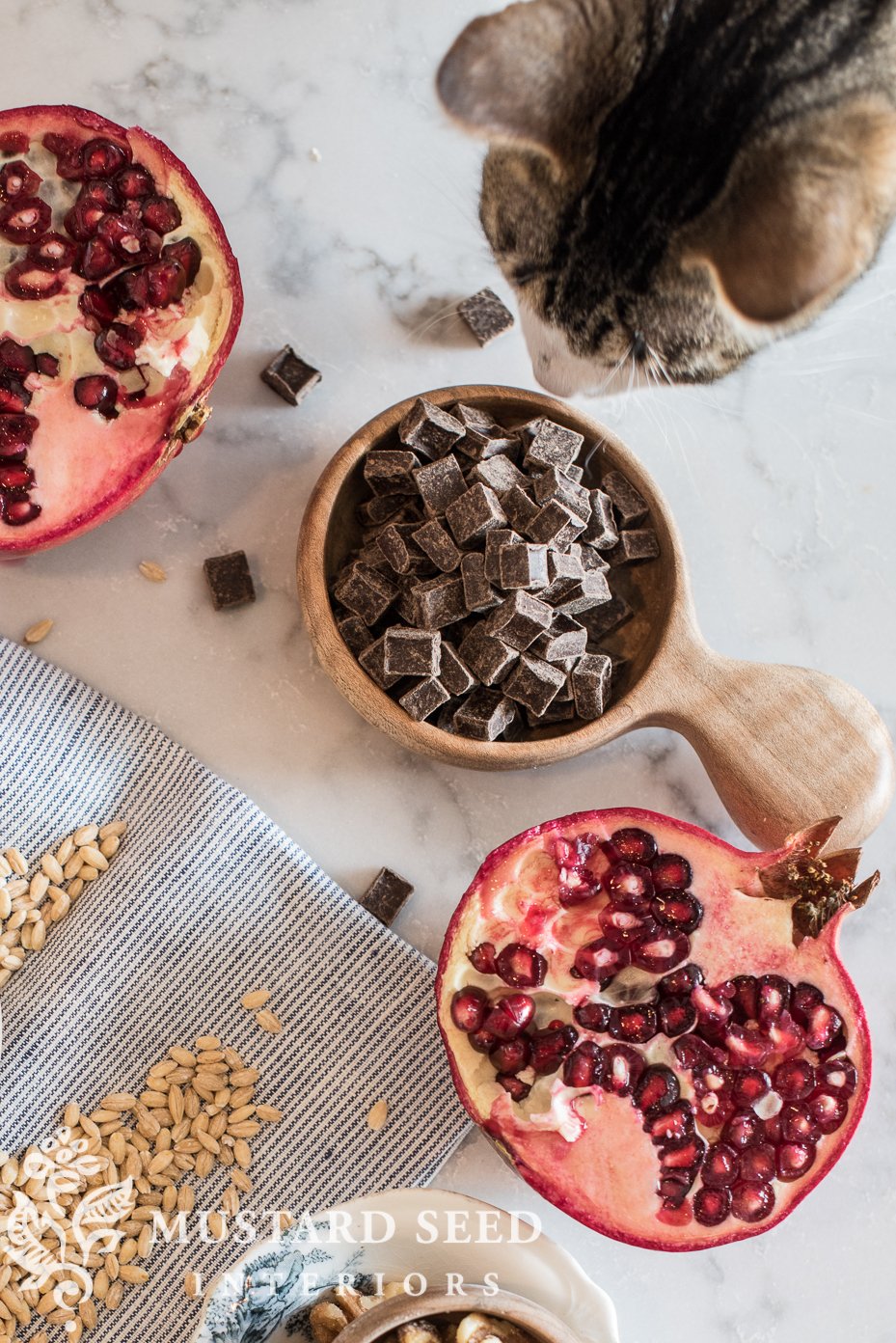 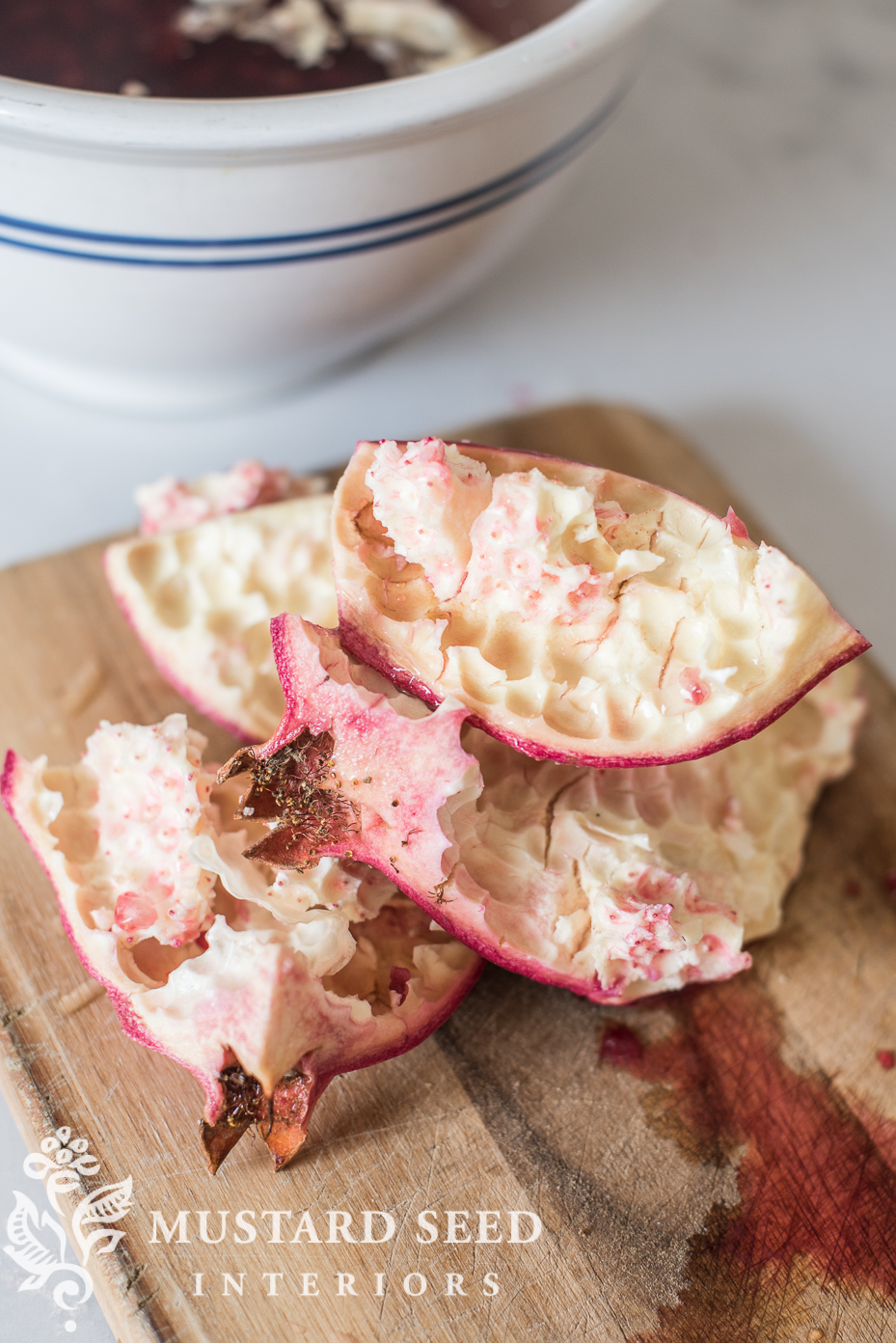 Continue to loosen the seeds from the pith in the bowl of water.  The seeds will sink and the pith will rise to the top. 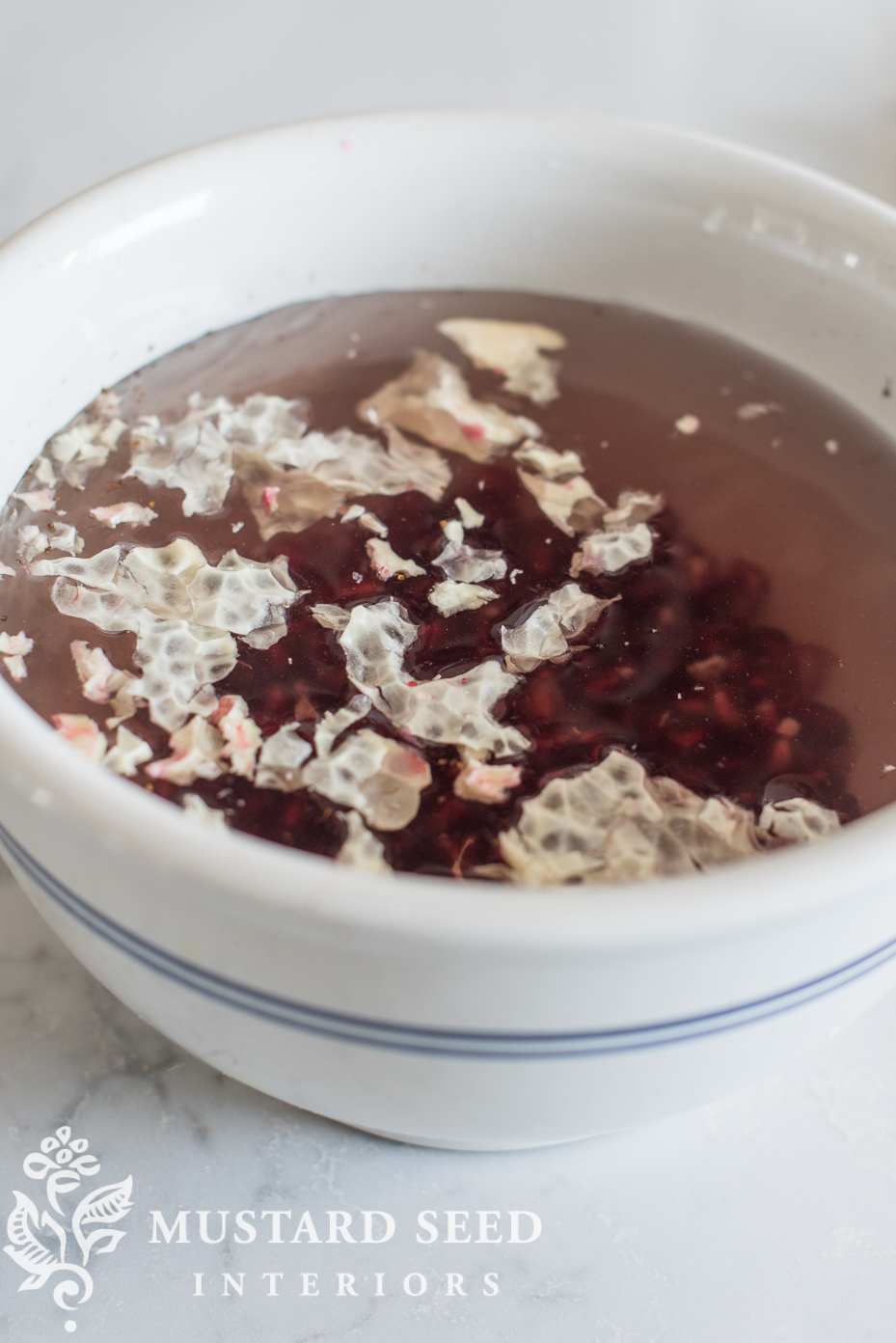 Scoop out the pith with a strainer and then drain the seeds.  Mix the pomegranate seeds, walnuts, and chocolate chips in a bowl. 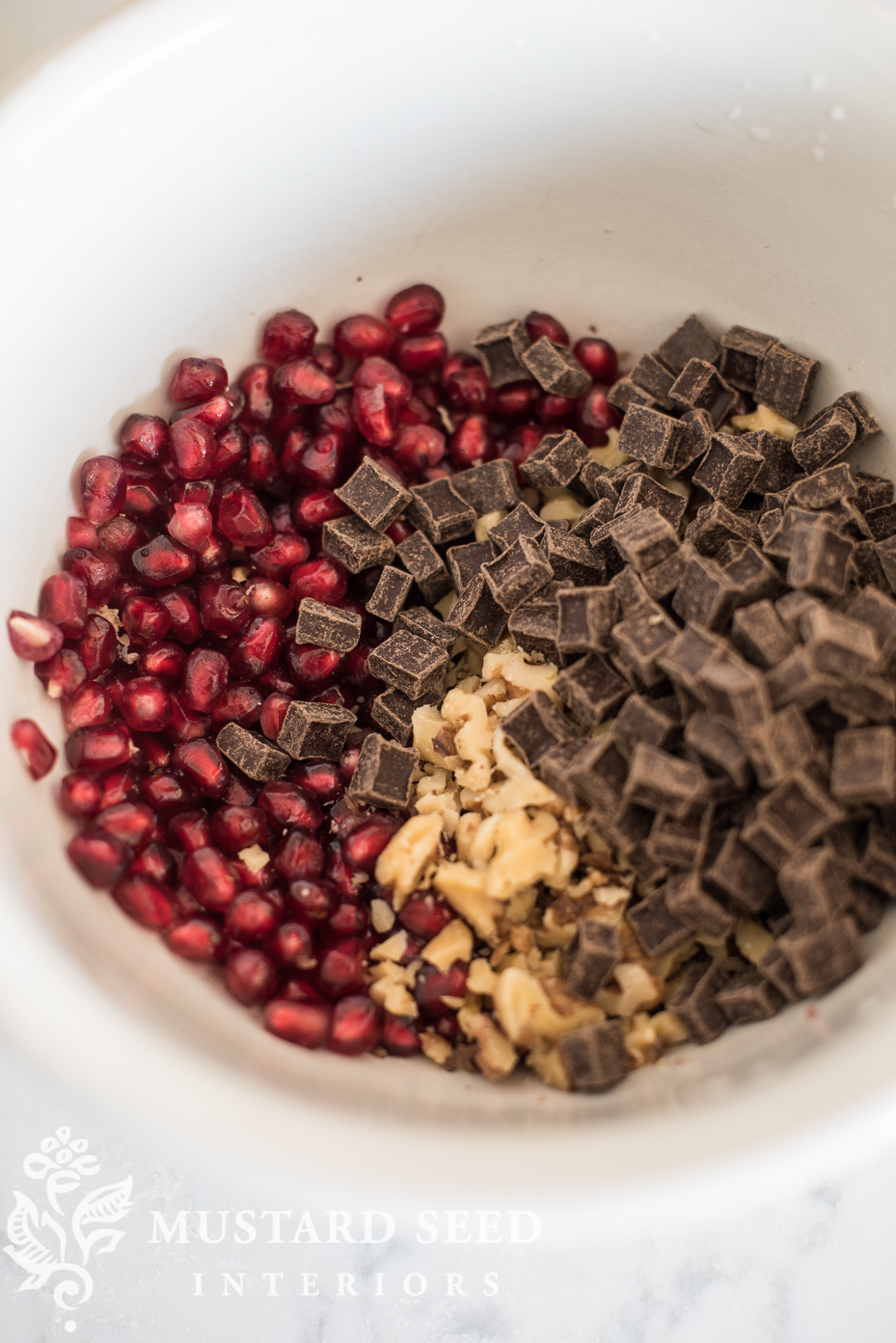 Cook the barley according to the instructions on the box/bag, making sure to add salt to the water. 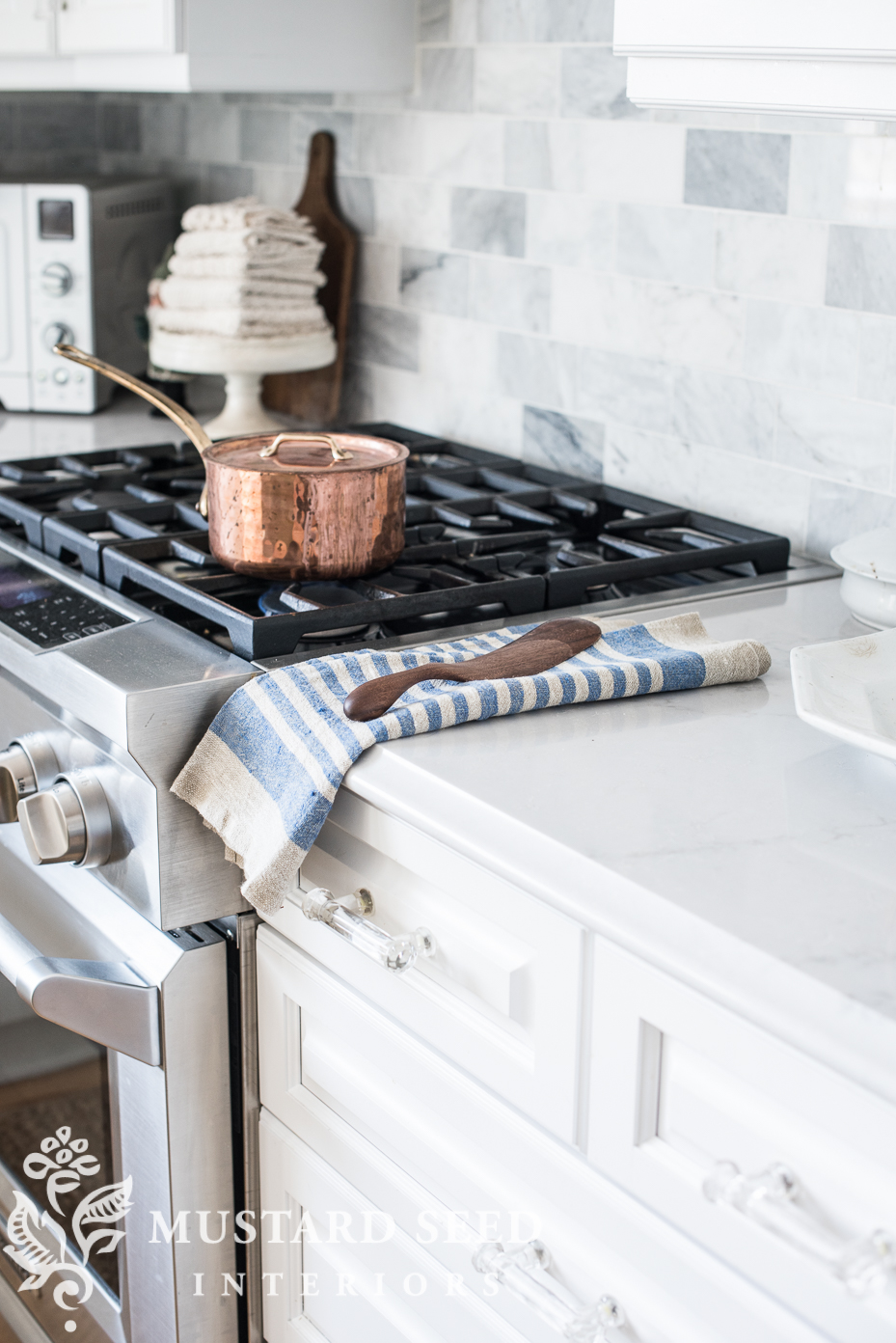 When the barley is cooked, spread it out on a cookie sheet to allow it to cool before mixing it into the pomegranate barley salad. 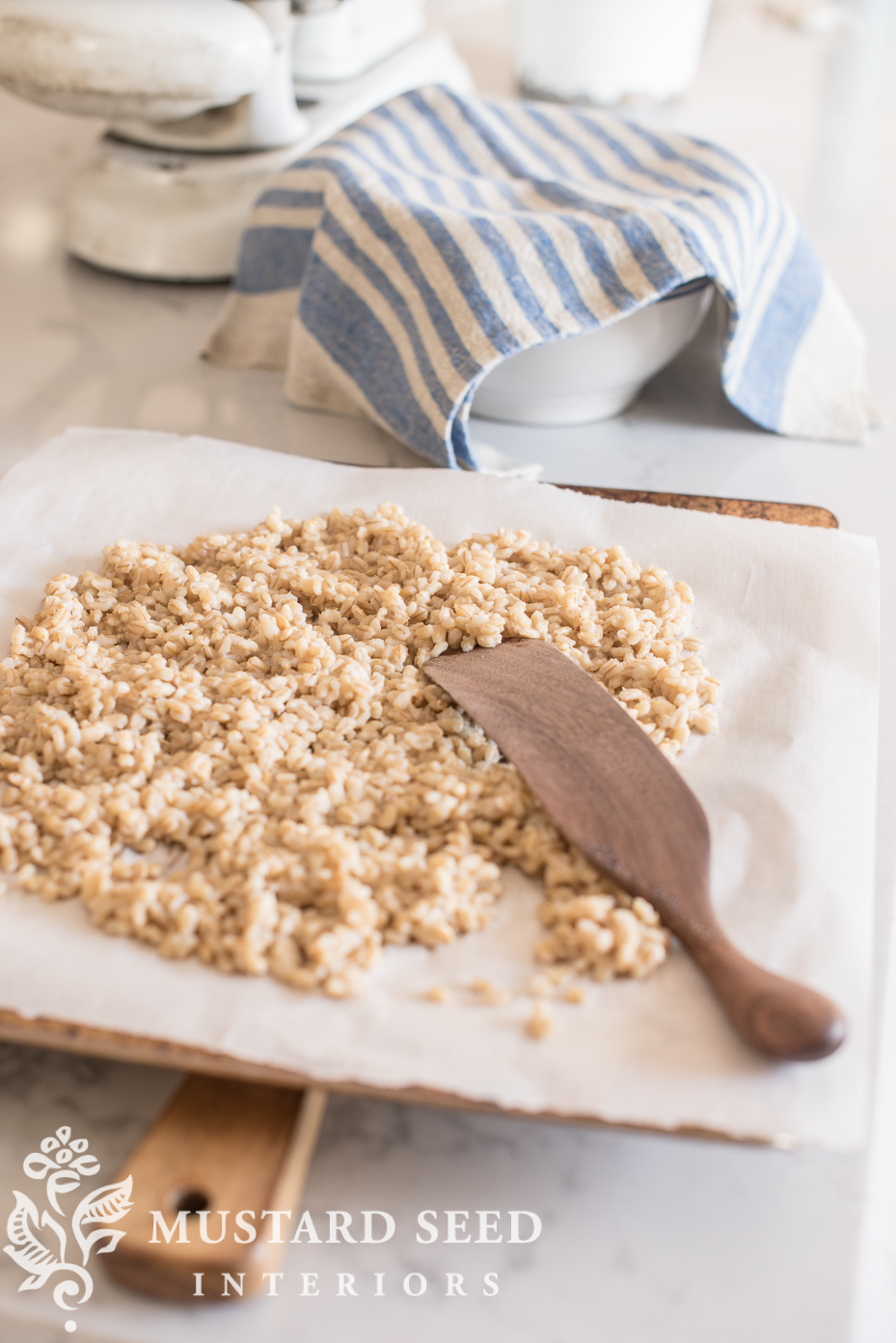 Mix together all of that yumminess… 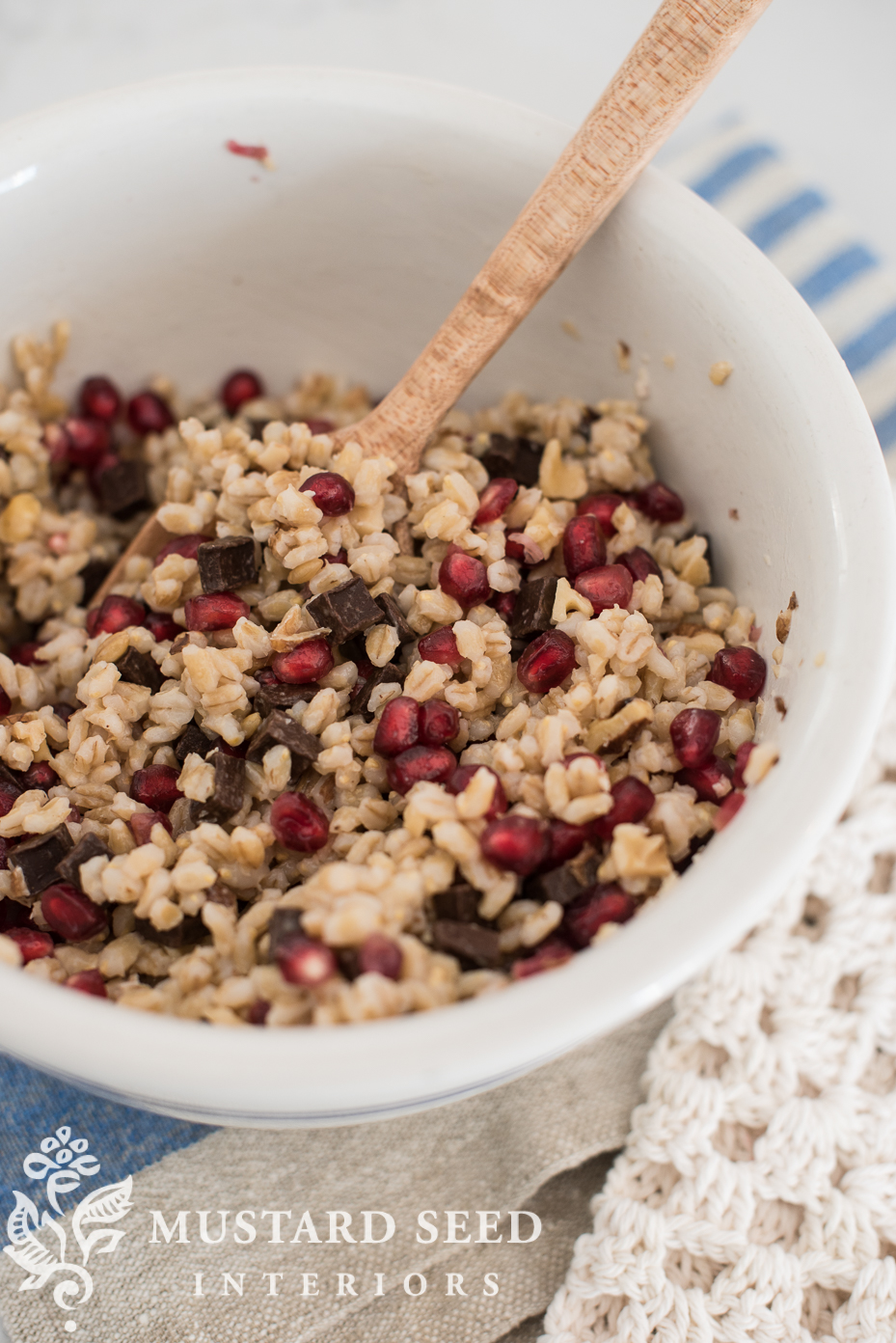 I like to chill mine before serving, you can serve it at room temperature or warmed, like oatmeal. 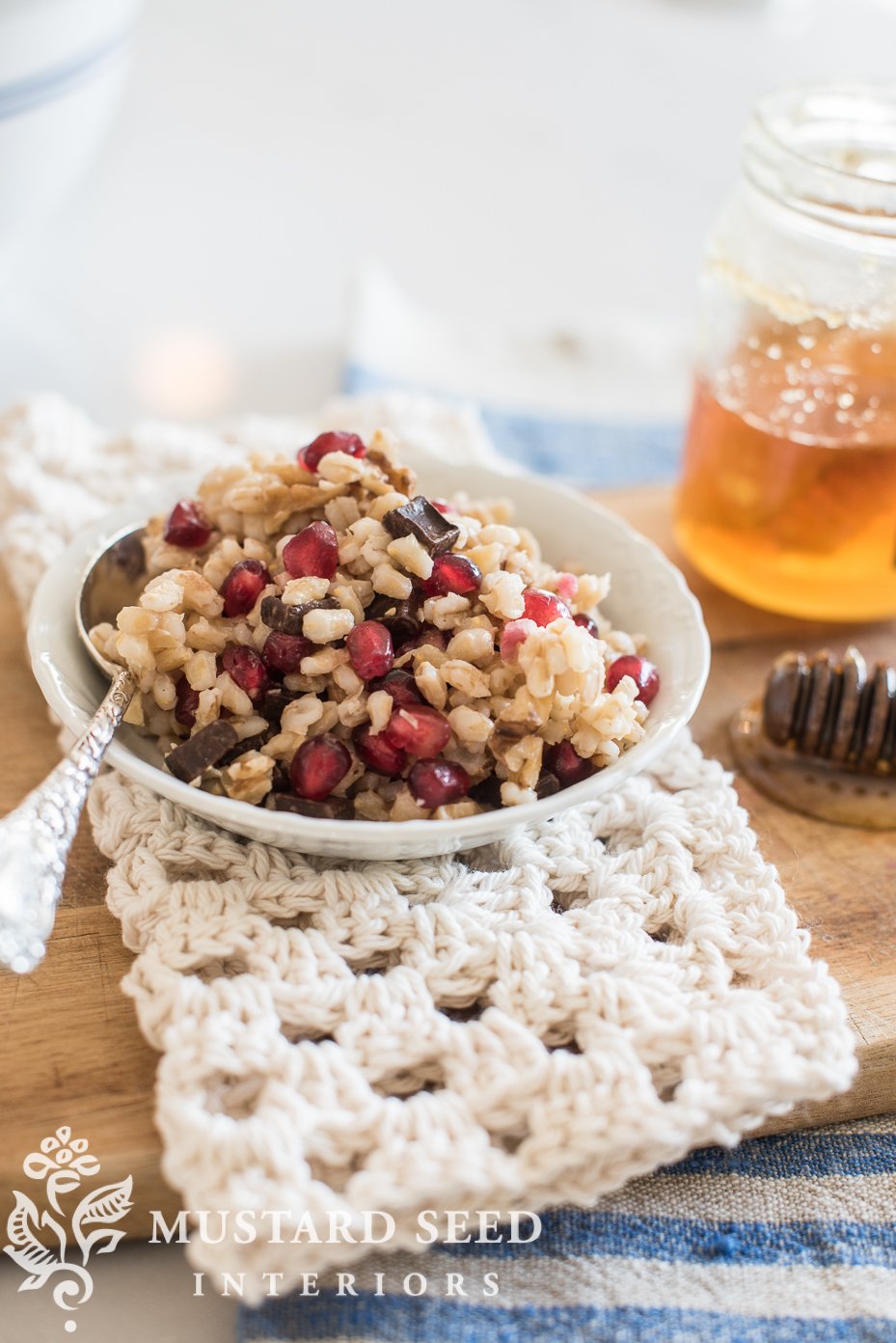 As I shared earlier, you can also add some honey or maple syrup on top for sweetness. 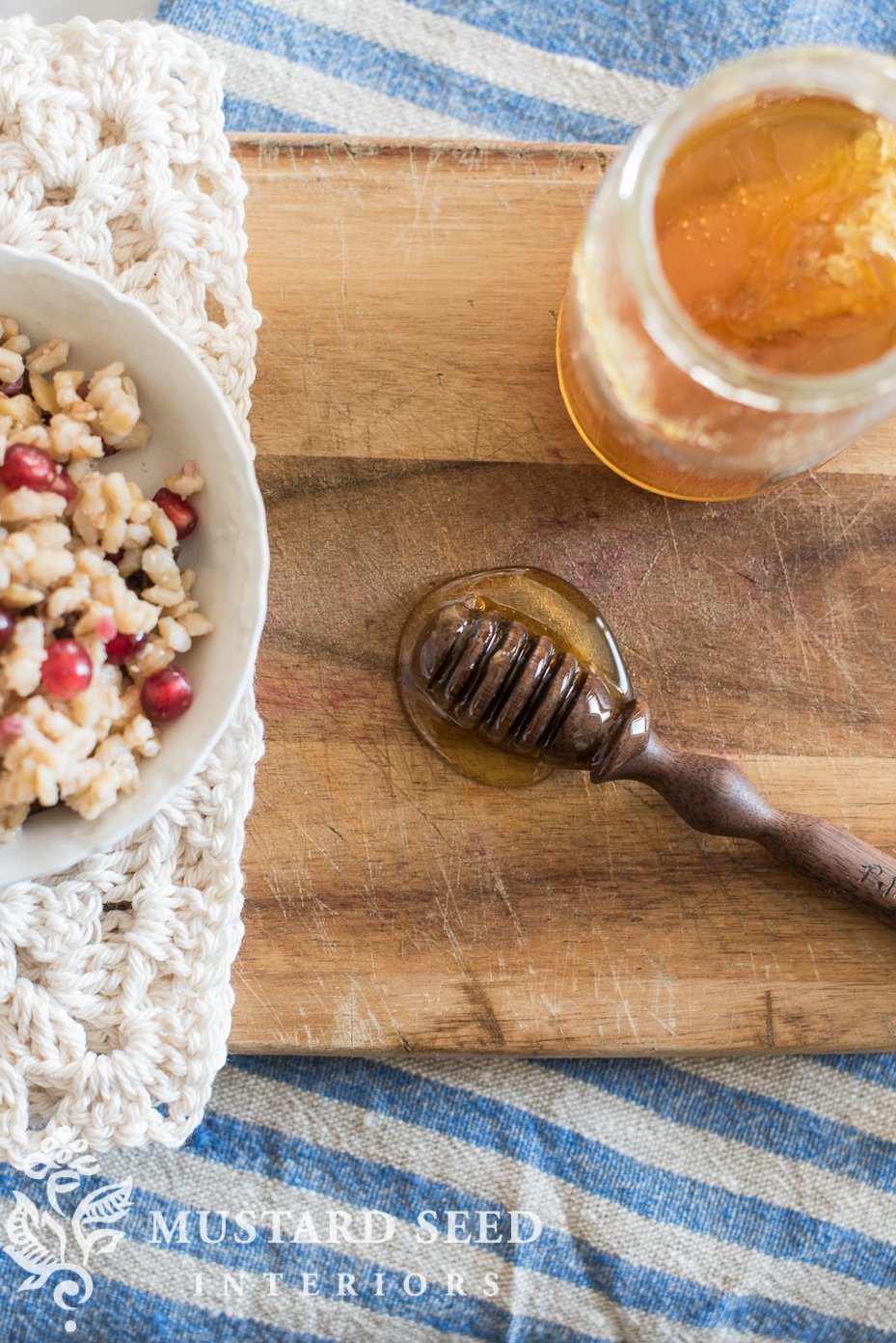 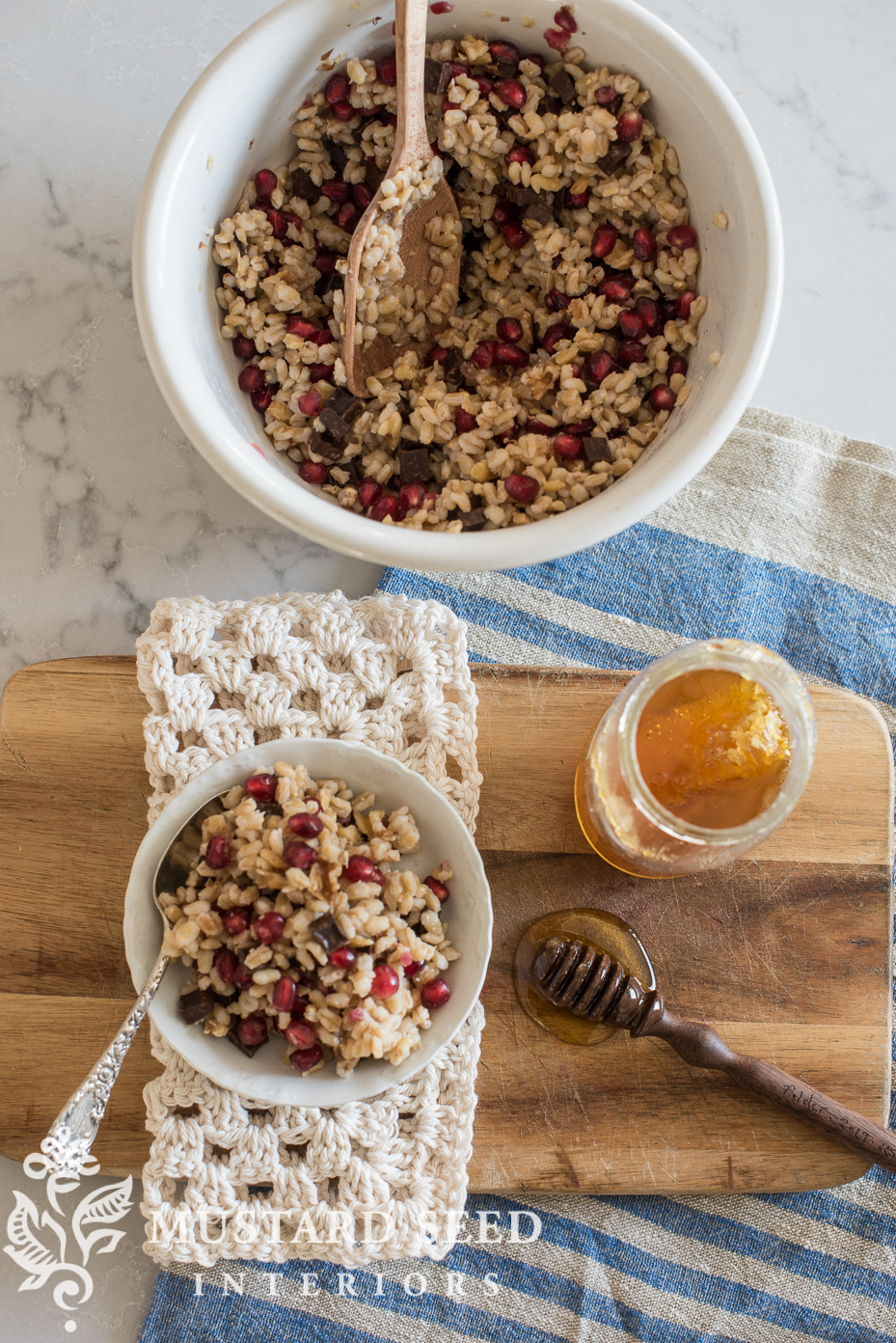 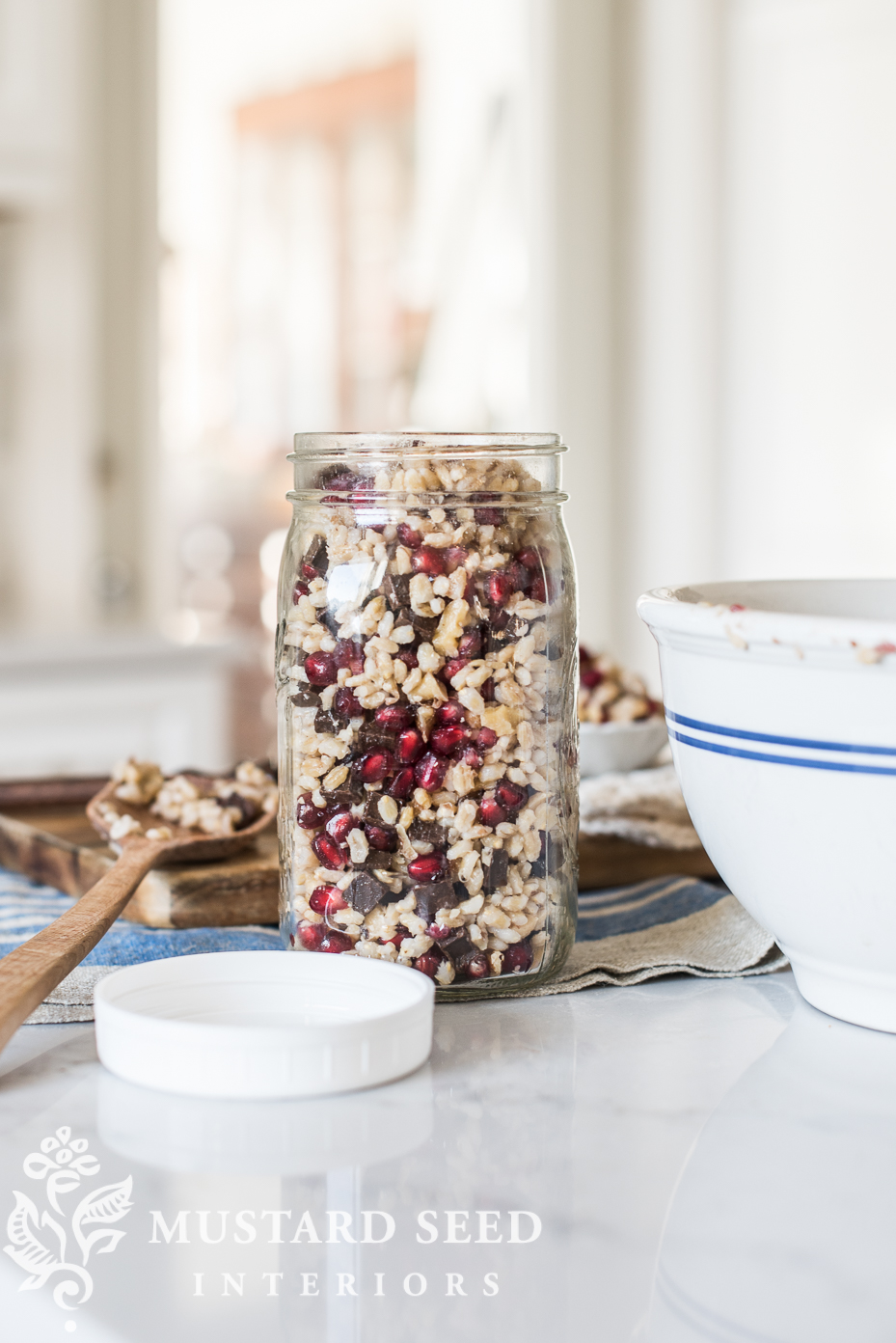 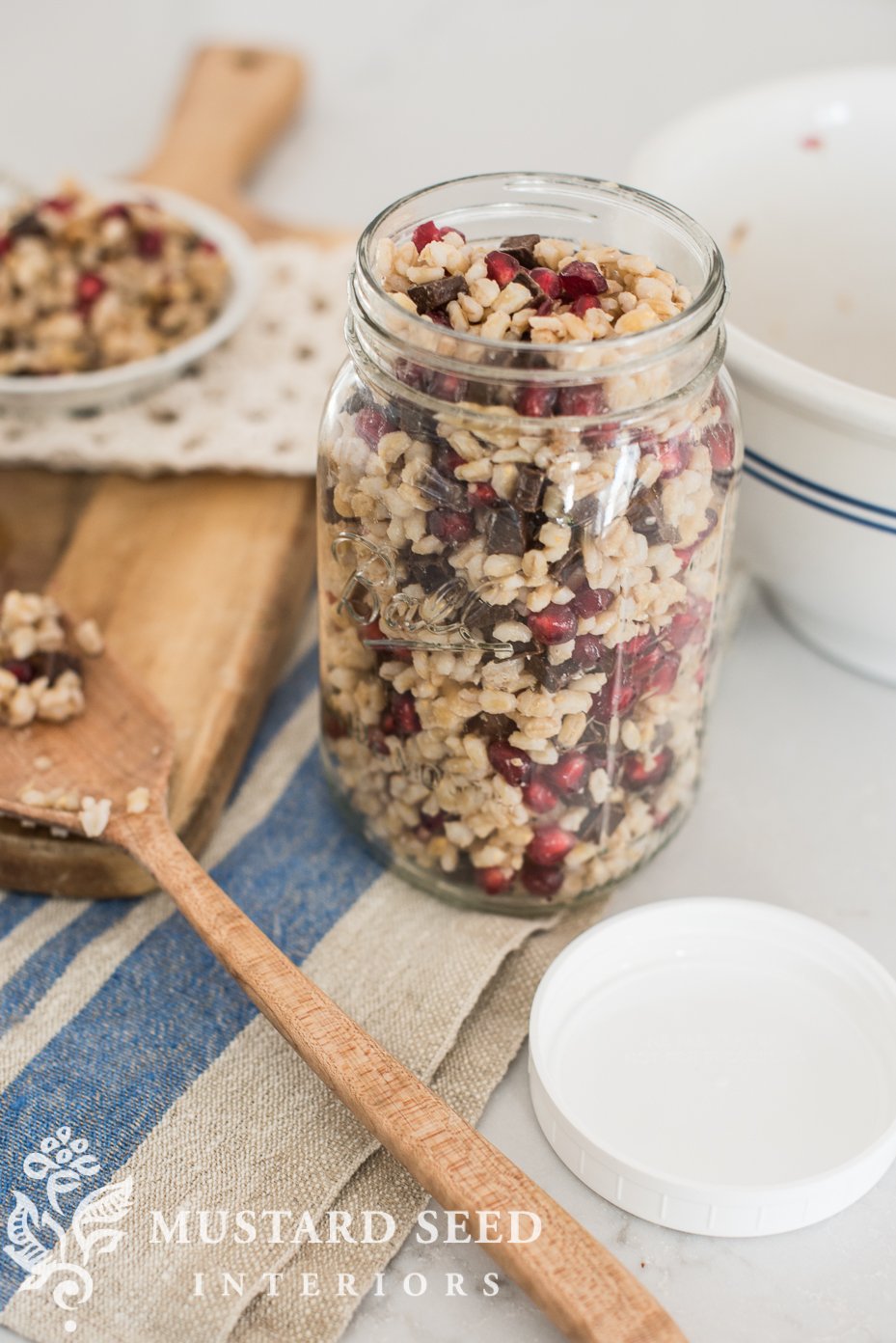 And, there you go!  A weird winter salad/cereal/snack, but it’s yummy!  The printable recipe is at the bottom of this post if you’re interested in giving it a try.  And, of course, you could personalize this in a variety of ways by adding different nuts, fruits, using different grains, etc. 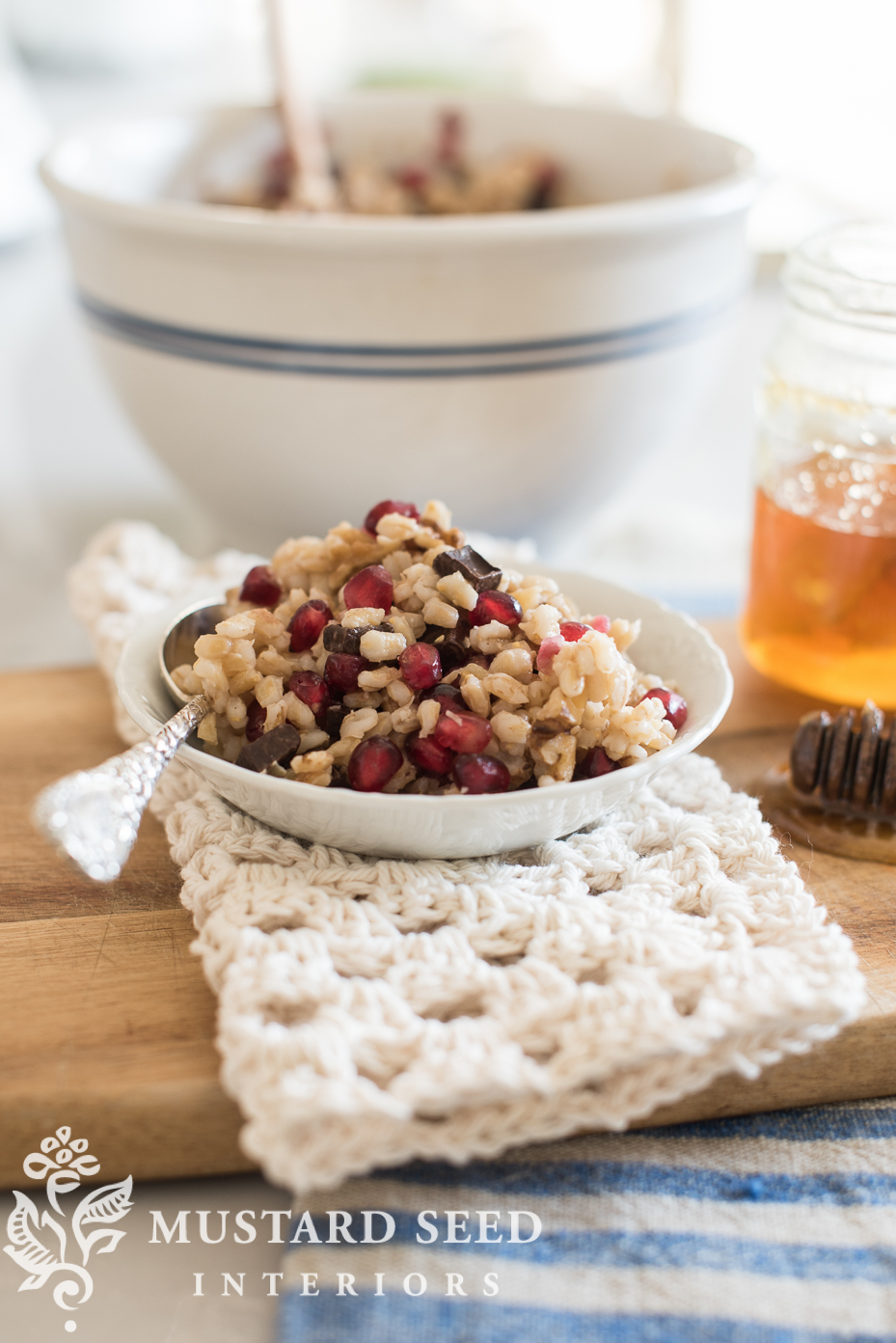 Before I sign off, I wanted to share about the wooden utensils I used while making this recipe.  They are all from Polder’s Old World Kitchen, a family-owned and operated business.  You can read their short story HERE if you’re not familiar with them. 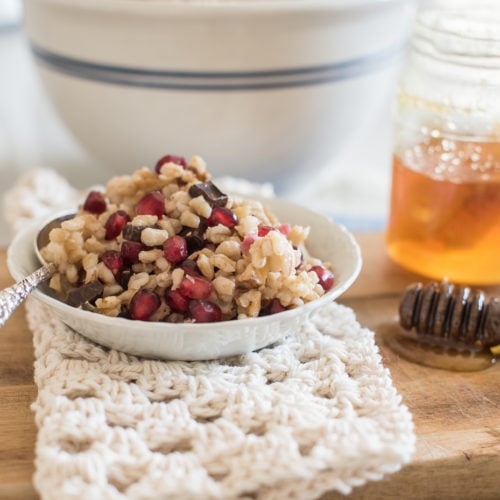 This is a strange, but tasty dish that can be eaten cold as a salad or warmed as a cereal.
5 from 1 vote
Print Recipe Pin Recipe
Prep Time 30 mins
Cook Time 30 mins
Course Salad
Cuisine American
Servings 8

You can find more holiday recipes, soups, and salads HERE.