Last year, I thought my new digs for Lucketts, a 20 x 40 “circus tent”, sounded enormous.  I kept adding more and more stuff to the “pile”, so I made sure the space would be filled. Well, two rental trucks later and the space was certainly full!  It was overflowing, in fact, and trying to find a place for everything was nuts.  We worked it out, but the tent was crowded and I would’ve been up a creek if it had rained before we moved some serious merchandise. 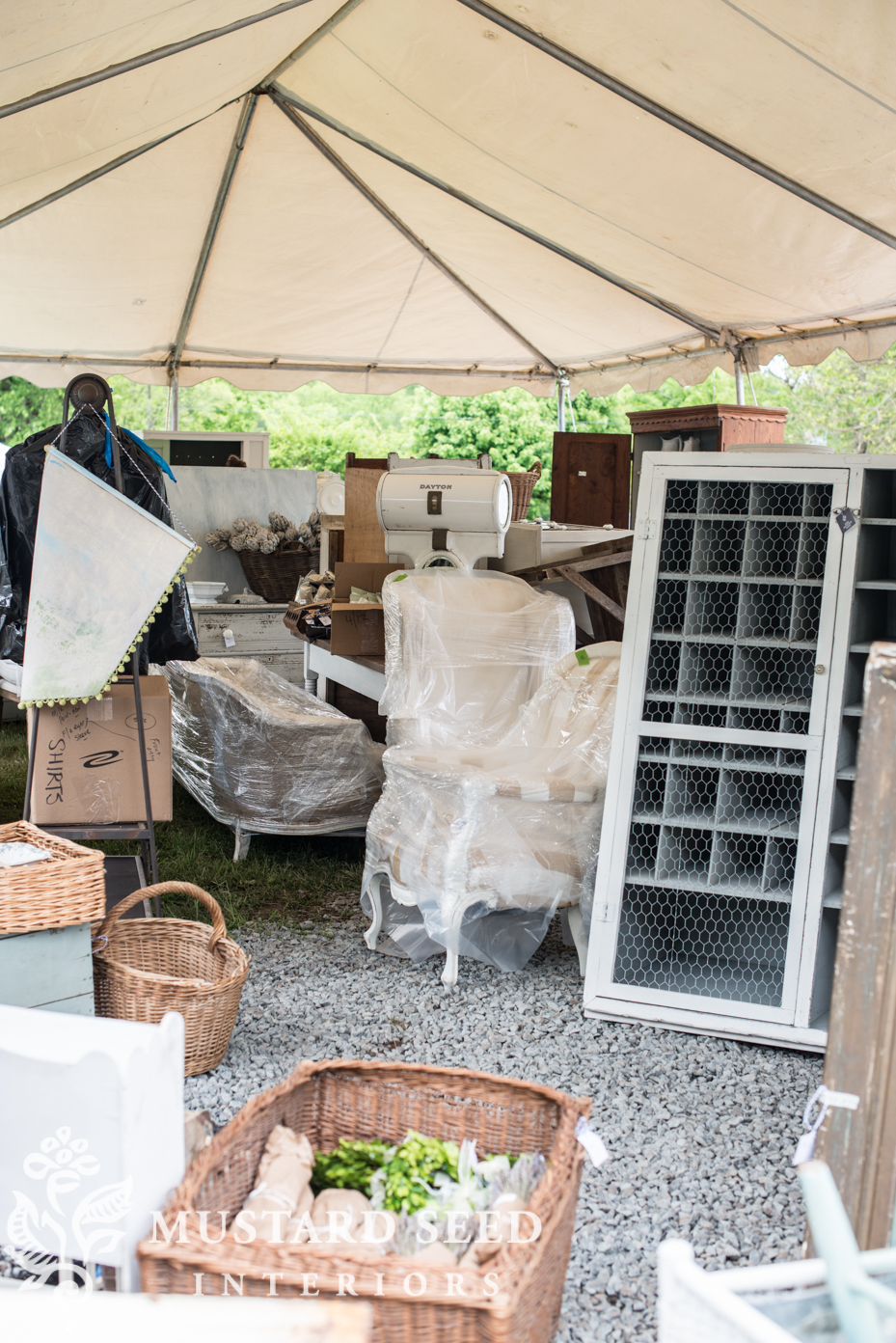 So, this year the Lucketts Spring Market moved to an entirely new location and I am in a large pavilion called “The Show Barn”.  I had a chance to see it a few months ago, but I really didn’t grasp the size of the space.

The stuff we’ve been working on over the past few weeks and months filled two 20′ rental trucks this year and I was starting to feel like I went overboard.  As soon as we started unloading those trucks this morning, though, my stuff seemed to shrink.  These pieces that looked so massive in the studio, were dwarfed by the tall ceilings and generous square footage of the barn. 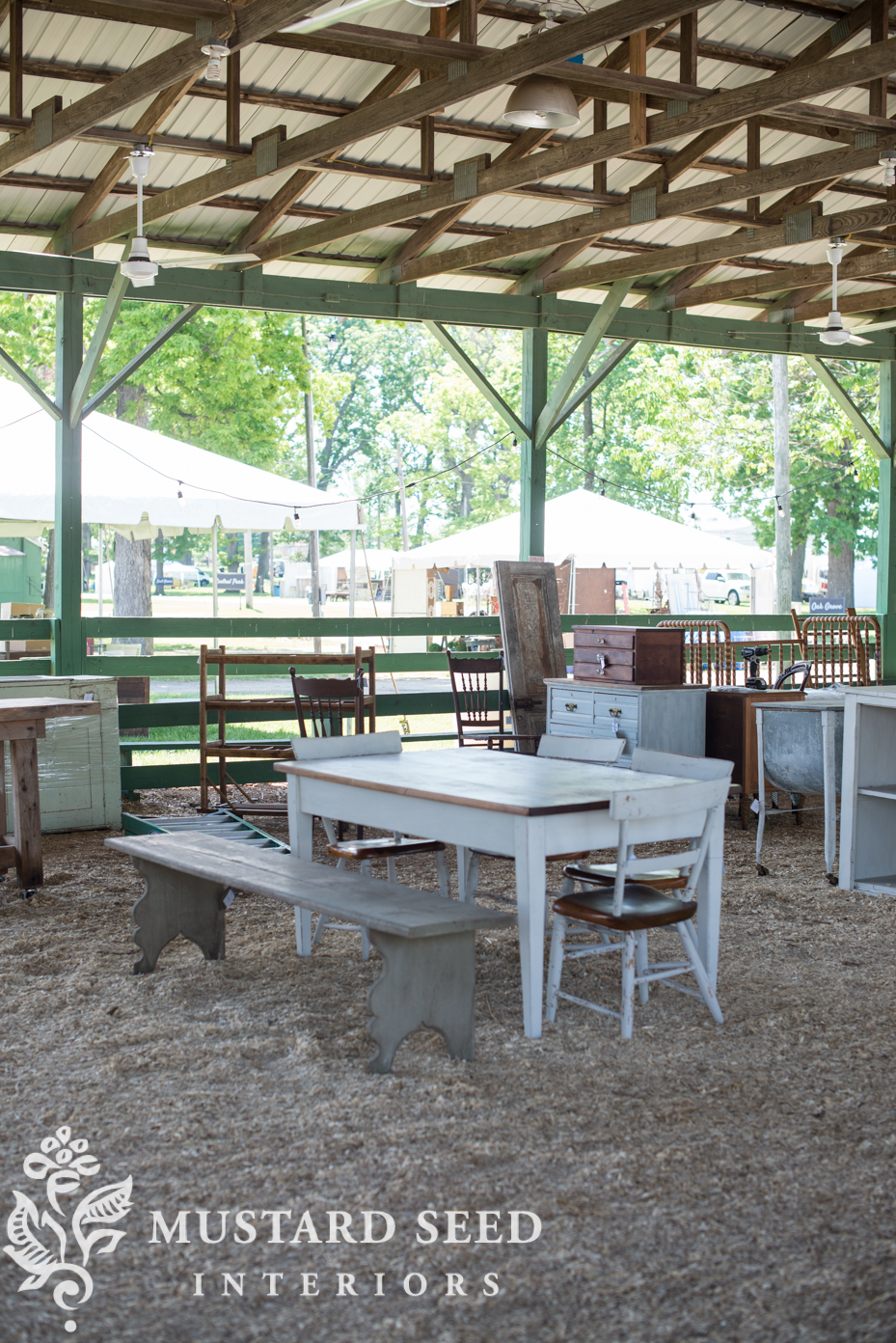 Once we started arranging the furniture, I realized just how much space I have!  I am so used to things being tightly packed in a maze, that I felt a little uneasy with all of the excess space.  I then thought about how delightful that will be for shoppers, though.  Everyone will be able to spread out a little more and take in the vignettes from a few feet away instead of a few inches. 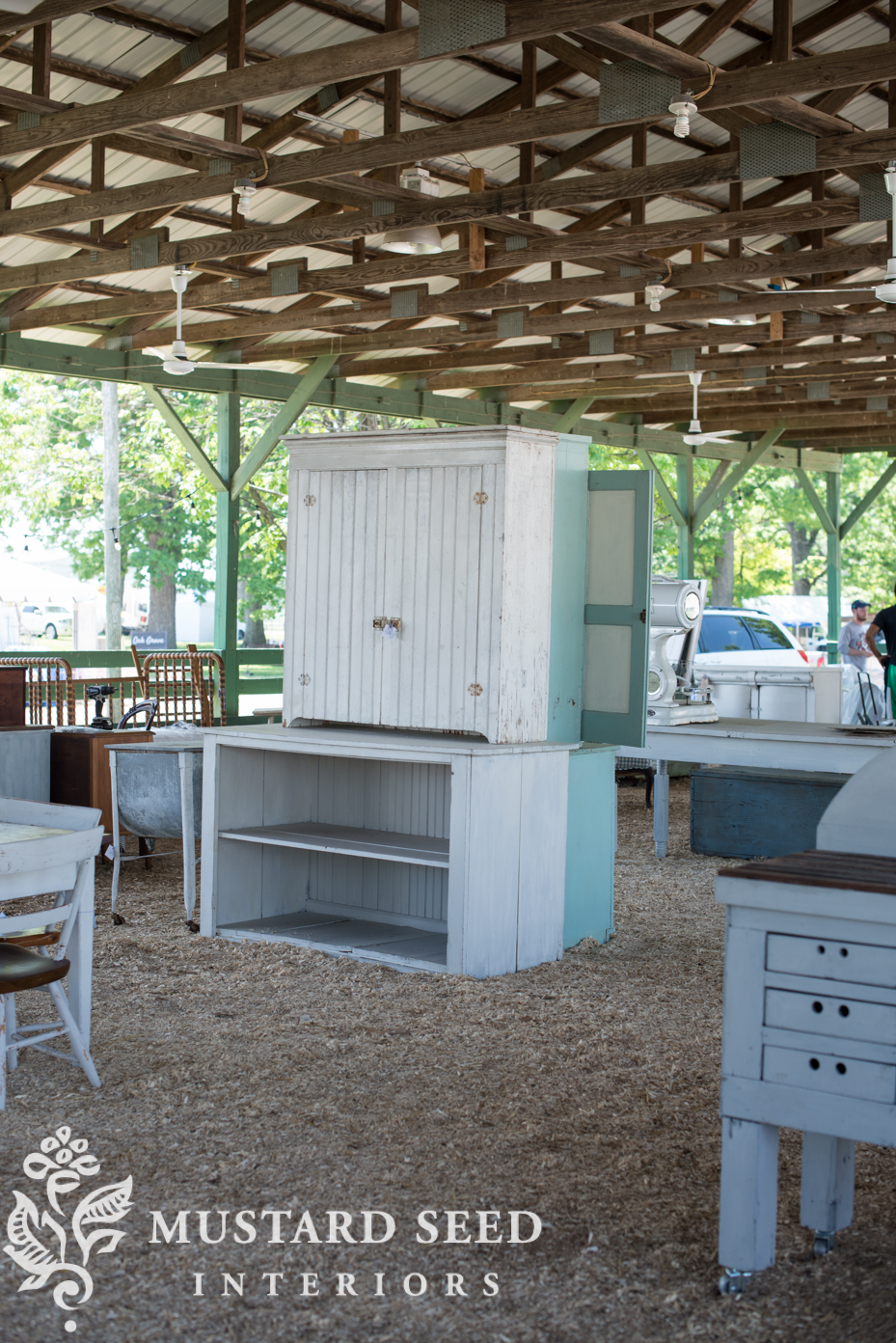 And I was able to make several “rooms” of sorts, with loose themes and color palettes.  They will come to life even more once we fill in with all of the accessories. 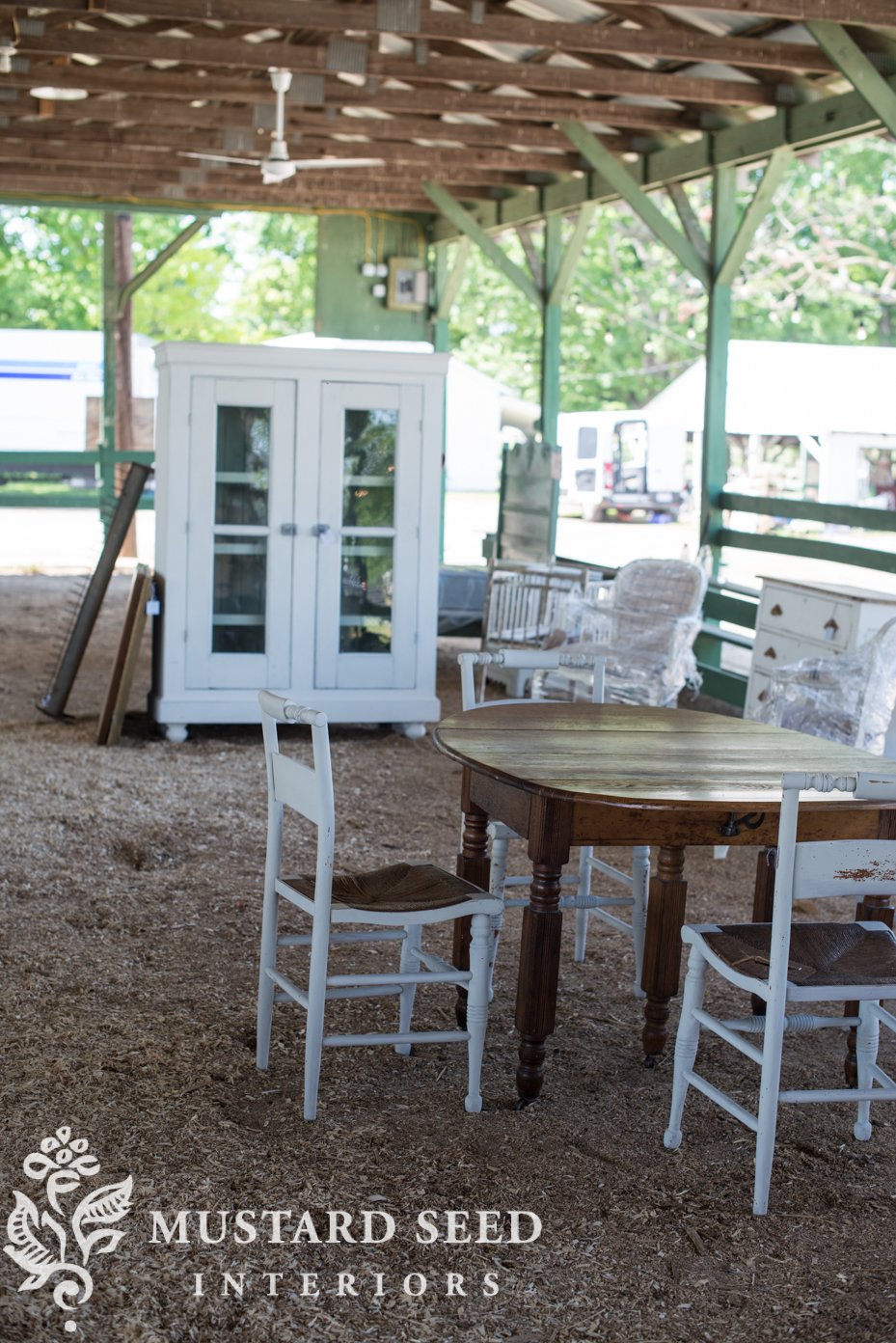 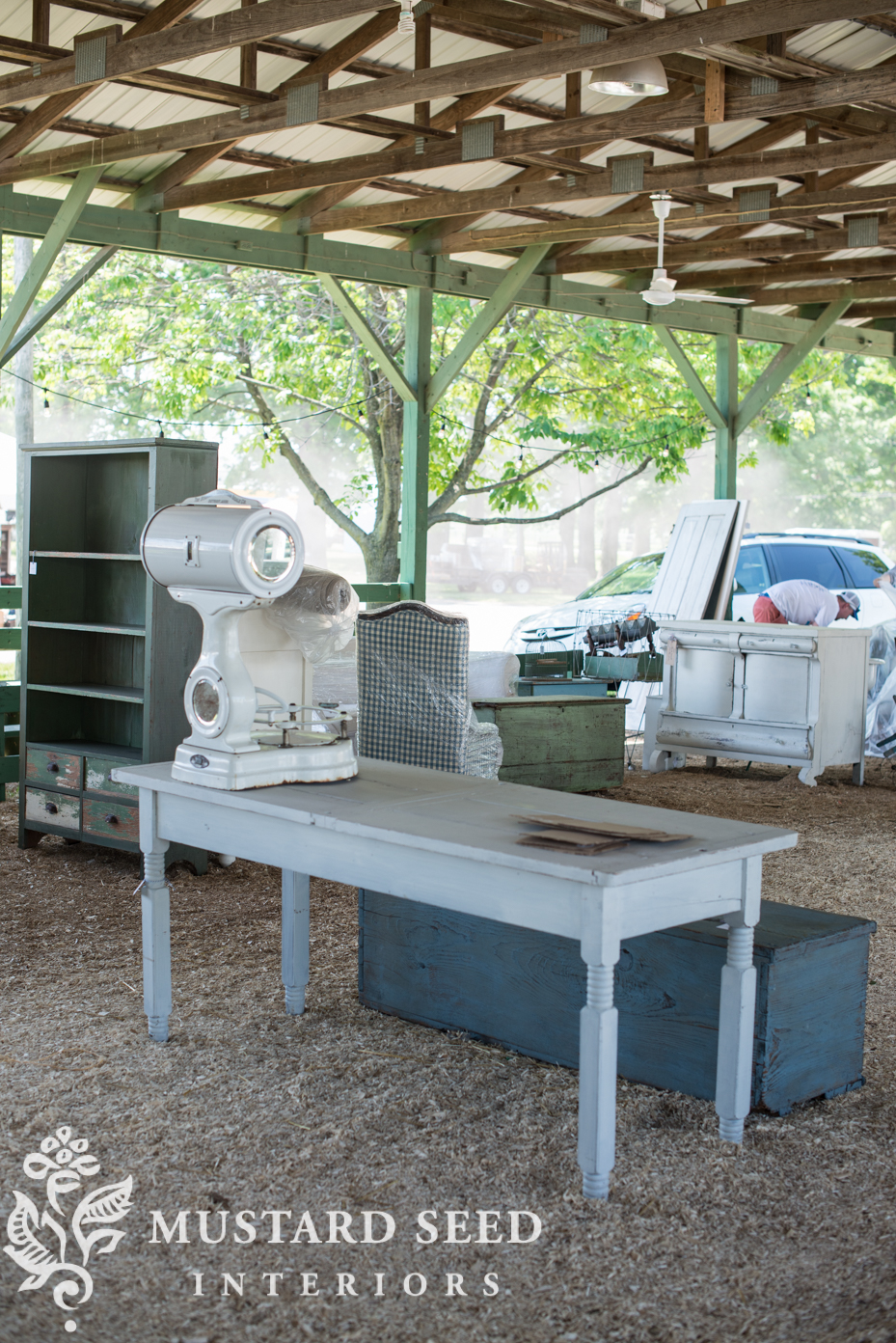 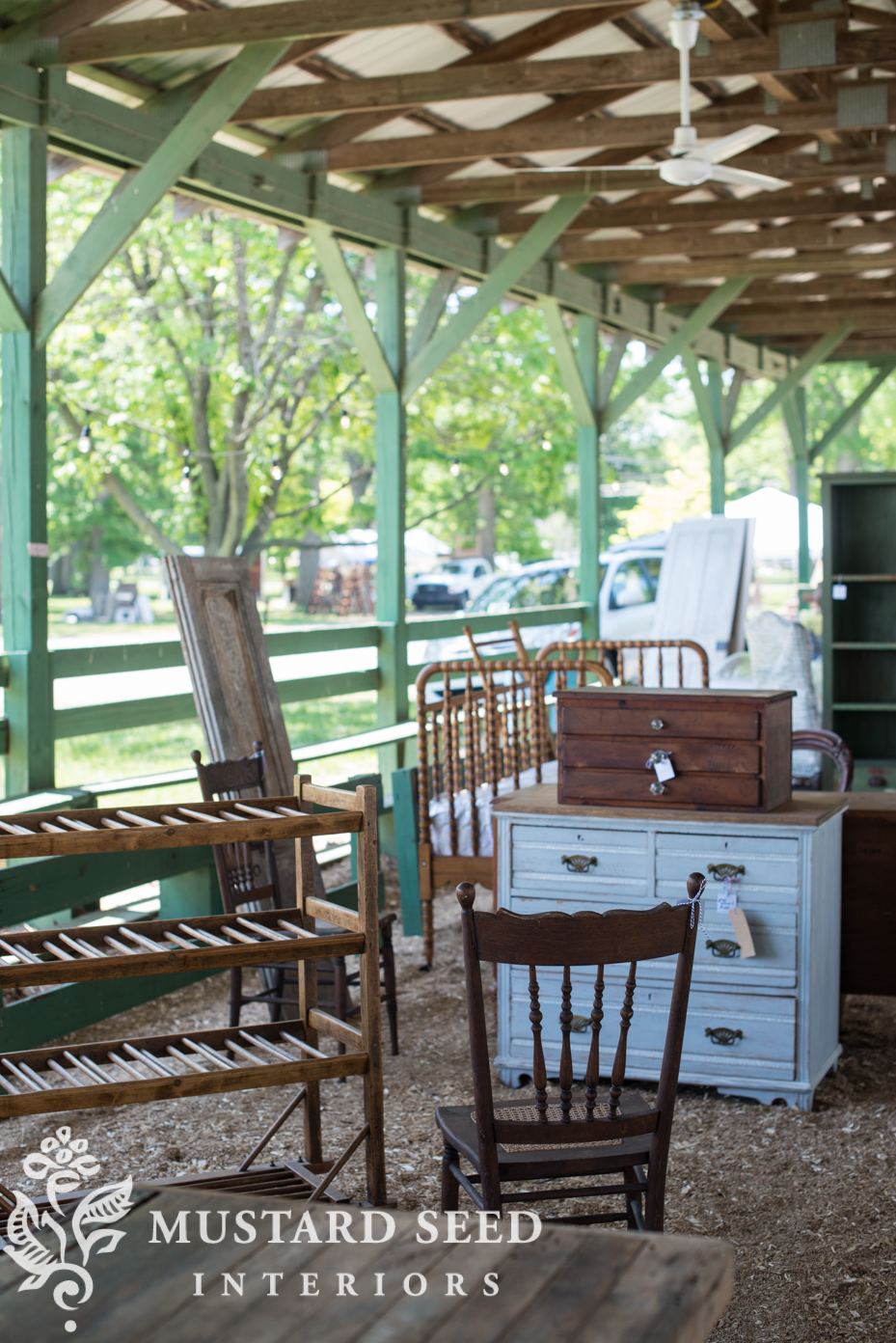 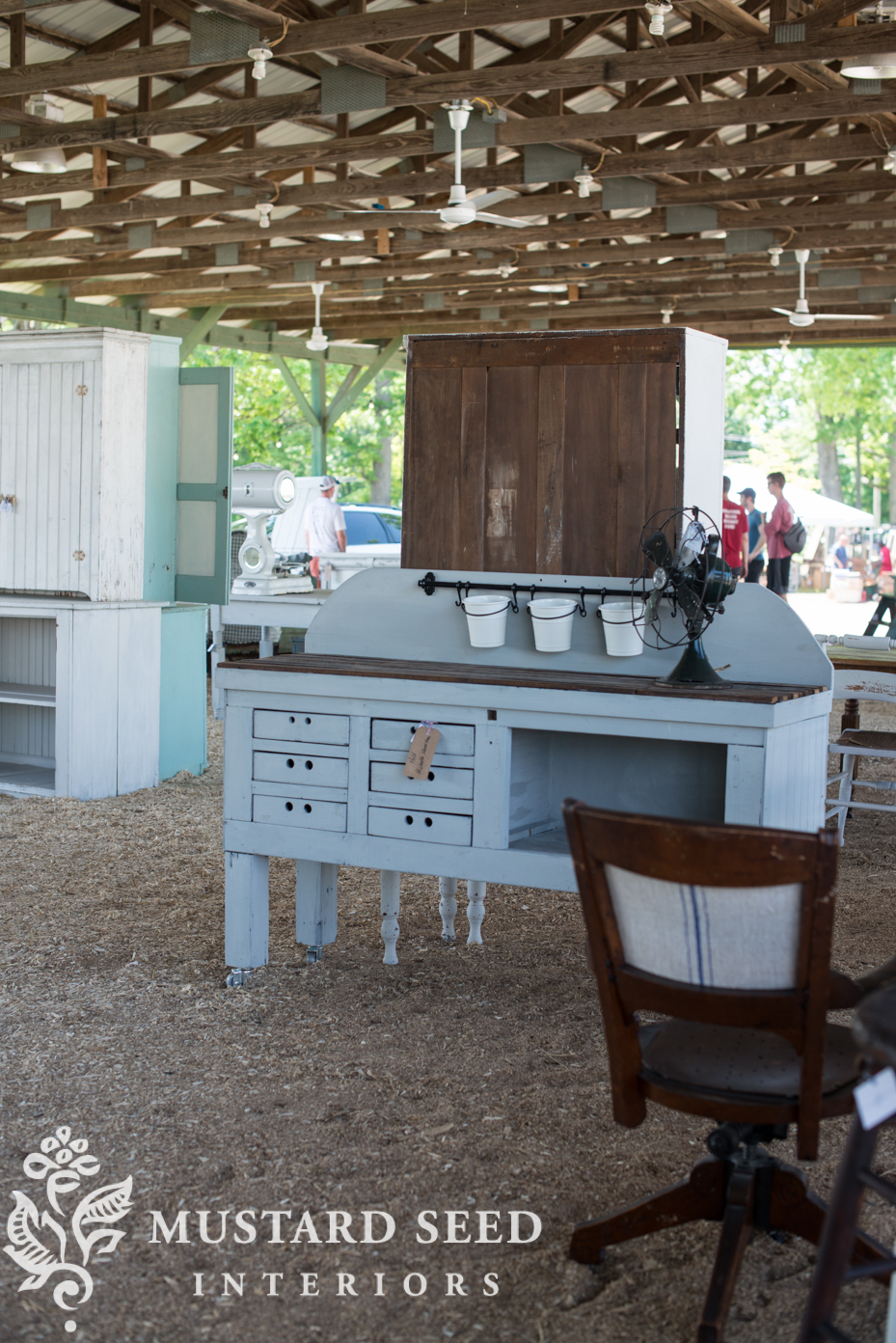 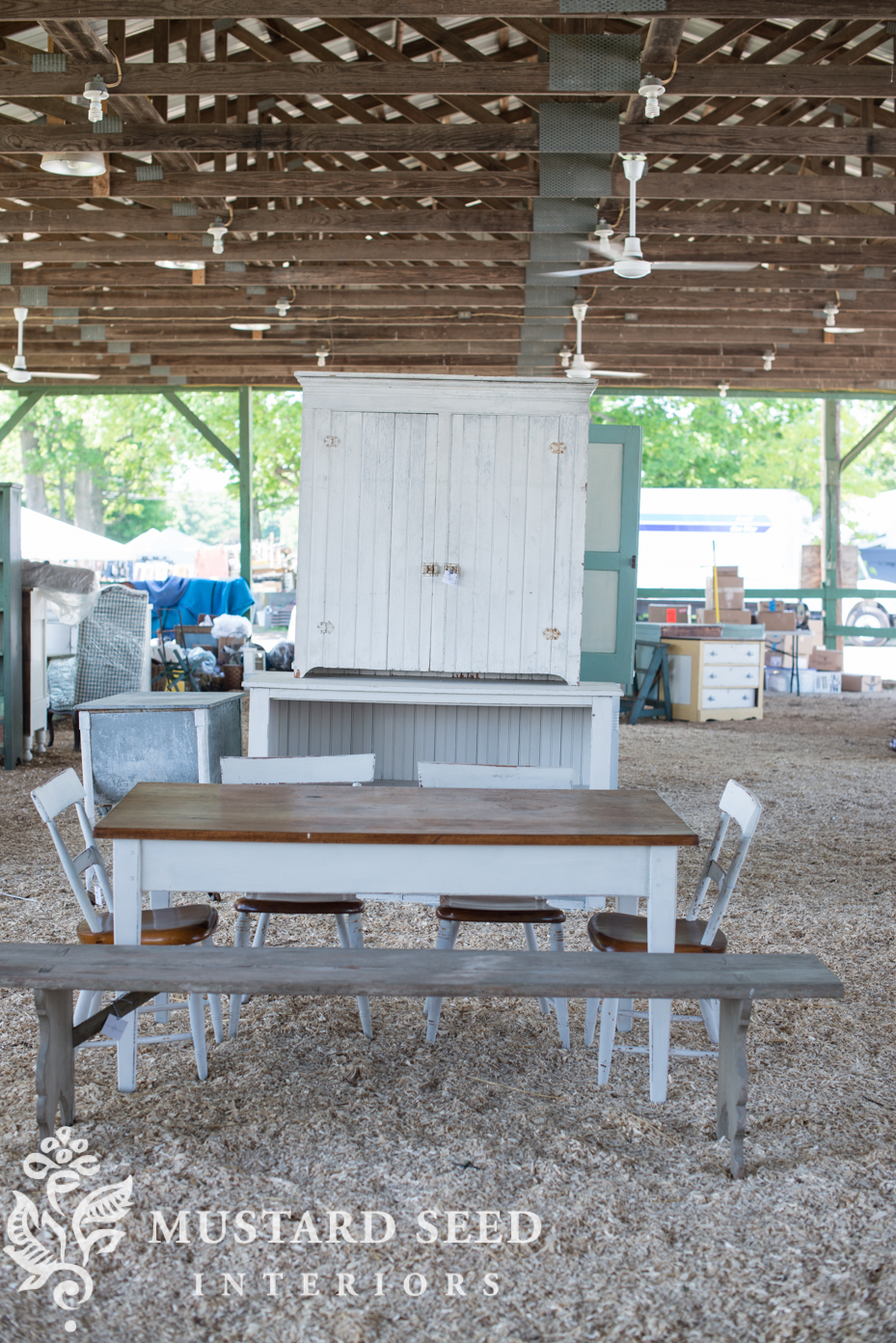 I really wanted to start styling today, but it was hot and I have a crew coming tomorrow to help me with all of the nitty gritty details.  Today’s crew was there to help with the big stuff.

So, once the large pieces of furniture were in place, one group of guys worked on hanging the mural… 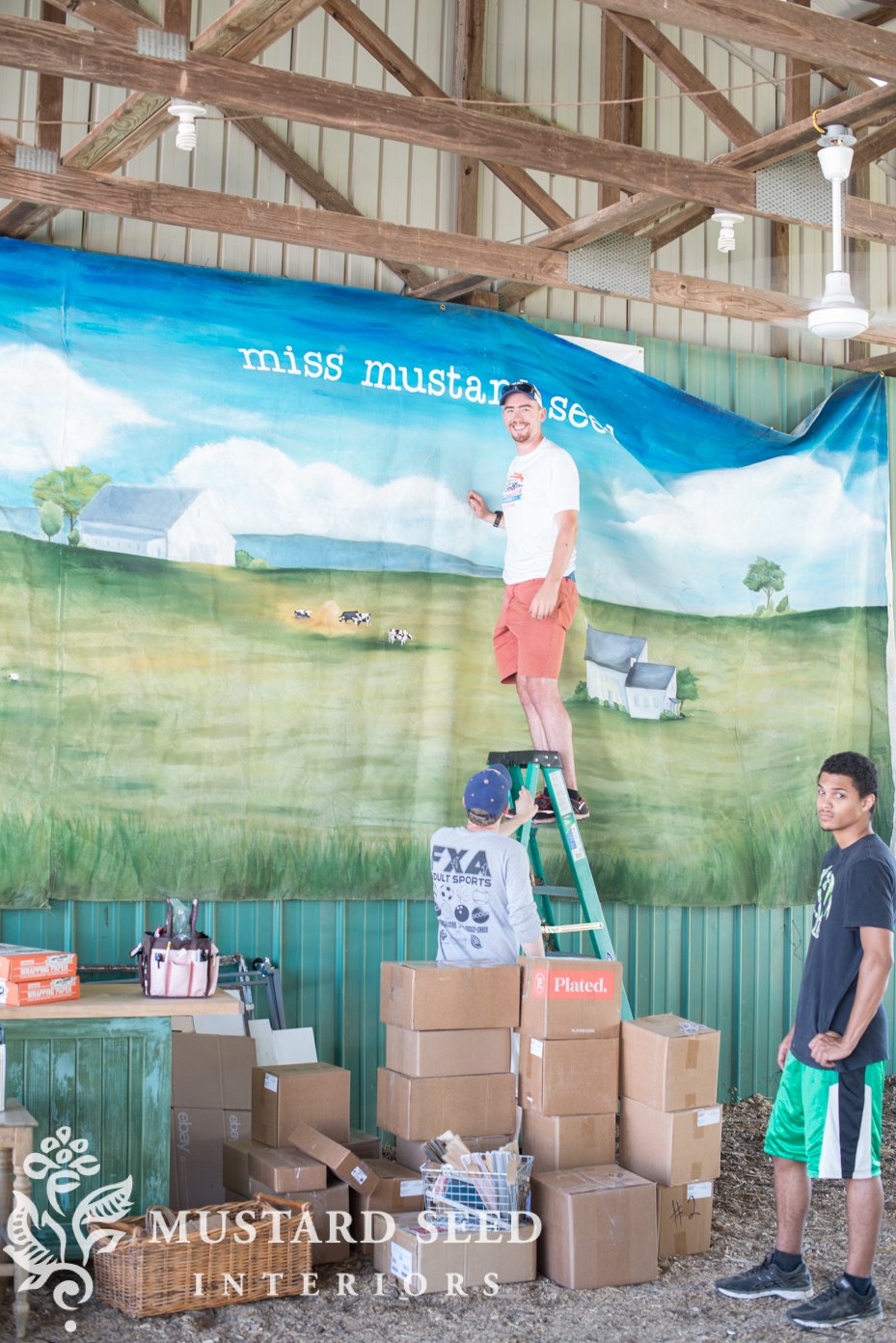 And another group hung some garden lights around the edge of the barn.  I realize they won’t be very impactful in the daytime, but I think it lends a festive vibe and they just make me happy.  So many things I do for these booths are purely for my own enjoyment! 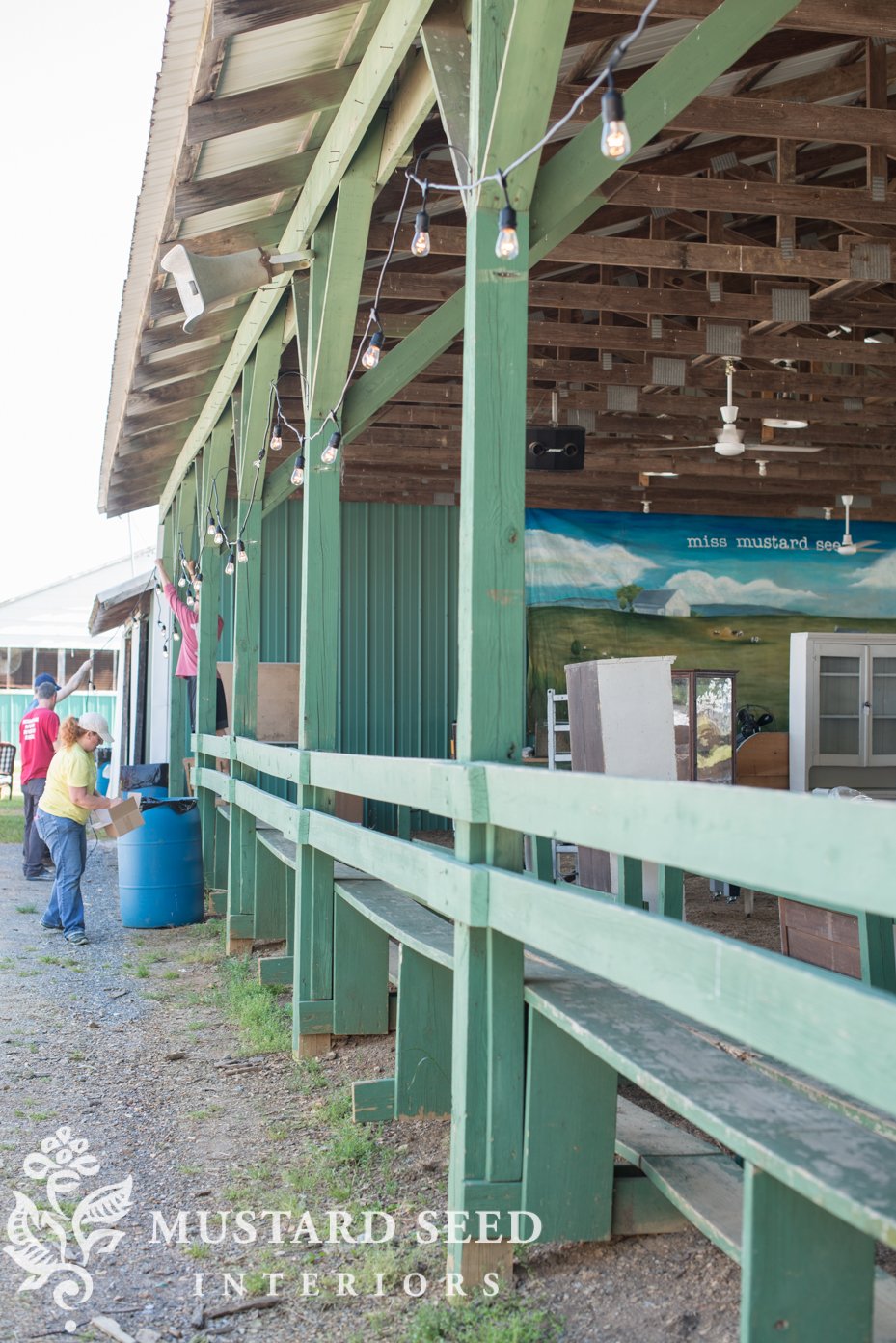 Once all that was done, we tucked everything in for the night and headed out to a late lunch at a local spot in Berryville. 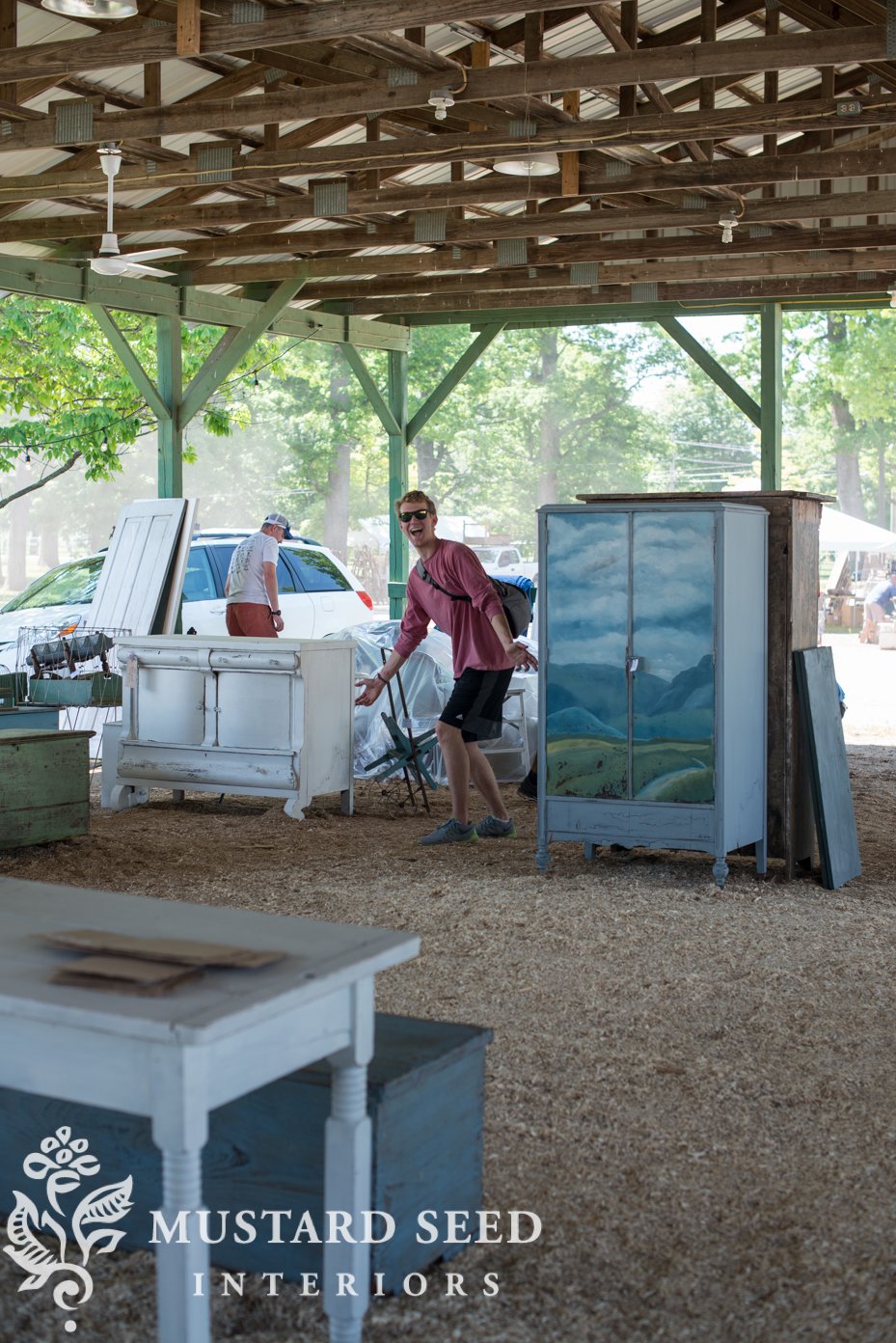 I’ll be heading out tomorrow morning to get the space all set up for Friday.  We usually set up the morning of, but that’s always stressful and it usually turns me into a complete tyrant for about two hours!  I’m looking forward to having an entire day to play and get everything just the way I want it in a relaxed fashion.

I’ll post pictures tomorrow night and will share the 2017 guide for shopping my space and the event.

Oh, and just a reminder that tomorrow (Thursday, May 18), I will be taking an hour break from the styling to participate in a live chat on the Washington Post website!  The chat will be from 11 am – noon (live from my space at the fairgrounds).  You can ask questions ahead of time and/or join the live chat HERE.

33 Comments on “Lucketts set up”