A few weeks ago, I was searching around for something short and inspiring to watch.  Maybe a documentary on an artist?  Or a short art lesson?  My curiosity was piqued when I spotted The Royal Paintbox on my Masterpiece Subscription.  I mean, anything about paintboxes these days is interesting to me!  So, I started the documentary.  In it, HRH Prince Charles shares his own artwork as well as art from various royals, kings, and queens, who showed varying levels of proficiency.  The work I was most interested in, though, was the sketchbooks of Queen Victoria.

I figured she painted since I have seen that portrayed in movies and series on Victoria, but I never imagined she sketched and painted extensively using different mediums.  As I watched Prince Charles slowly flip through some of her sketchbooks, I had to pause the documentary to see if they had ever been published.  And yes!  Some of them were published in a 1979 book by Marina Warner called Queen Victoria’s Sketchbook.  I found a copy on Thriftbooks for $13 and ordered it before I even finished the documentary. 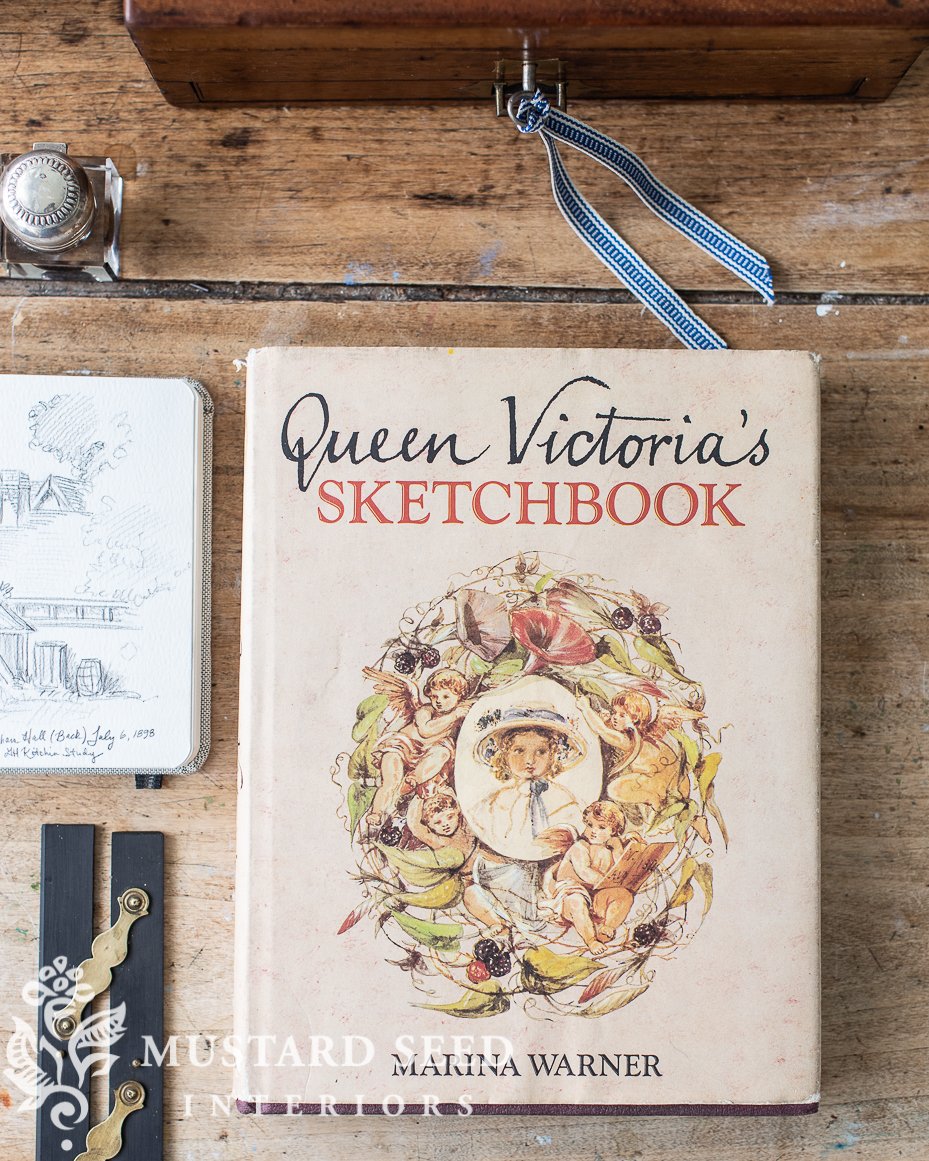 Let me insert here that I love little surprises you find in used books sometimes.  I almost always buy books used if they are available and the price difference is significant enough for it to make sense.  This copy of Queen Victoria’s Sketchbook has a sweet inscription inside the front cover.

I hope you enjoy this book about Queen Victoria’s interest in painting and sketching.  With lots of love, Cary & Howard

I would’ve been three years old when this book was gifted and, even though this inscription wasn’t written to me, I’m allowing the sentiment expressed by Cary & Howard to trickle down to me.  Yes, I think I will enjoy it. 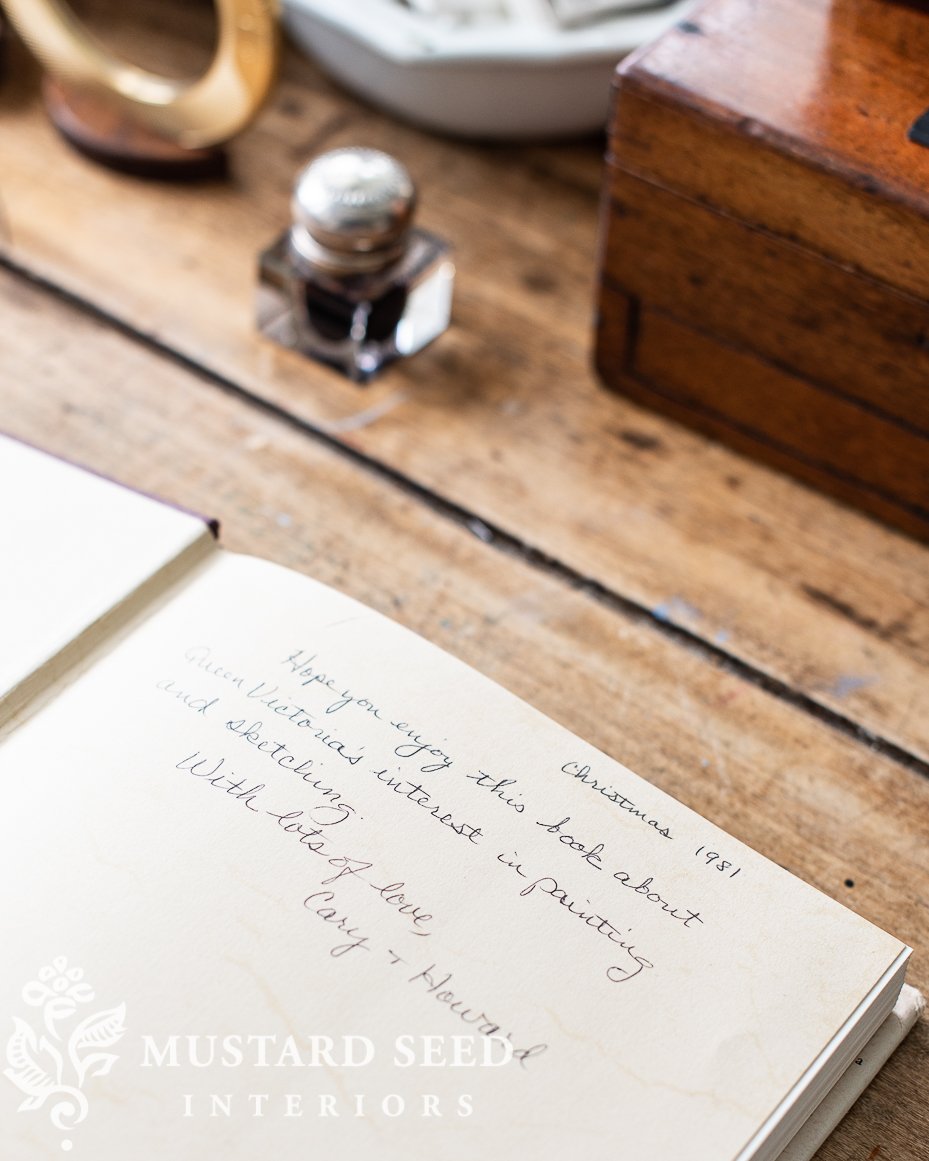 The book itself is delightful.  With most art books, I browse through them first and mark pages I want to revisit.  I didn’t do that in the case of this book.  I found I was thoroughly interested in reading it and really digging into how Victoria saw the world, most relatably as a woman, wife, mother, and artist, and, historically, as a Queen. 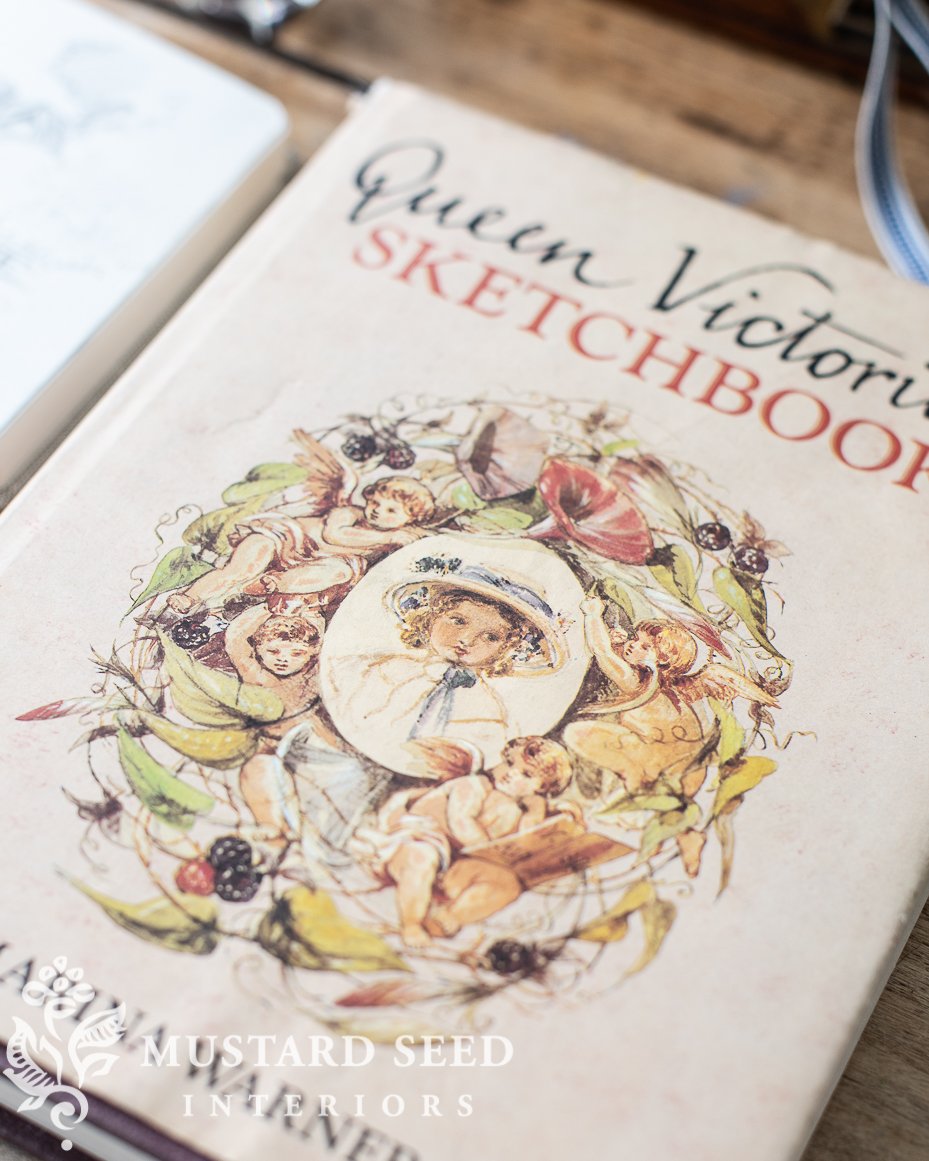 The biggest takeaway from the book for me is that Victoria wasn’t a great artist.  The author points out that if art had been her desired profession, she most likely wouldn’t have been successful.  There is definitely talent displayed in her work, but not the kind of talent that would compare with celebrated artists of that period.  And Victoria was apparently aware of that, but it didn’t deter her from drawing and painting throughout all but the very early and very late years of her life.  She sketched and painted for over 60 years, filling over 50 albums!  Isn’t that so inspiring?

It’s so easy to think we’re not called to do something simply because we’re not at the level of “the best” of our contemporaries.  But there is so much beauty in persistence and doing something because you love it. And, in Victoria’s case, because you want to record your memories.  Photography is so common to us these days that it’s easy to take it for granted and forget that Victoria couldn’t just pull out her phone and snap a picture of fleeting moments.  Photography at that time was more cumbersome and formal, although that changed towards the end of her reign.  So, the best way to capture a moment was to draw it, paint it, and write about it.  She did all three.  I haven’t studied her enough to know if it was out of love for creating or because she knew history was told by those who record it.  Maybe she understood that, even from an early age when she started sketching and keeping a diary.  Or maybe she would’ve done that even if she wasn’t going to be the Queen of England.  Maybe that was just in her.

I did make a note that while she did sketch a scene from her coronation and drew people of note, most of her drawings were of daily life…her family, her dogs, a scenic view.  With social media being prominent in today’s culture, it feels like we should only record the big stuff.  But, this book was so much more interesting for all of the little everyday sketches of life.  The everyday, the average, and the normal are worth recording. 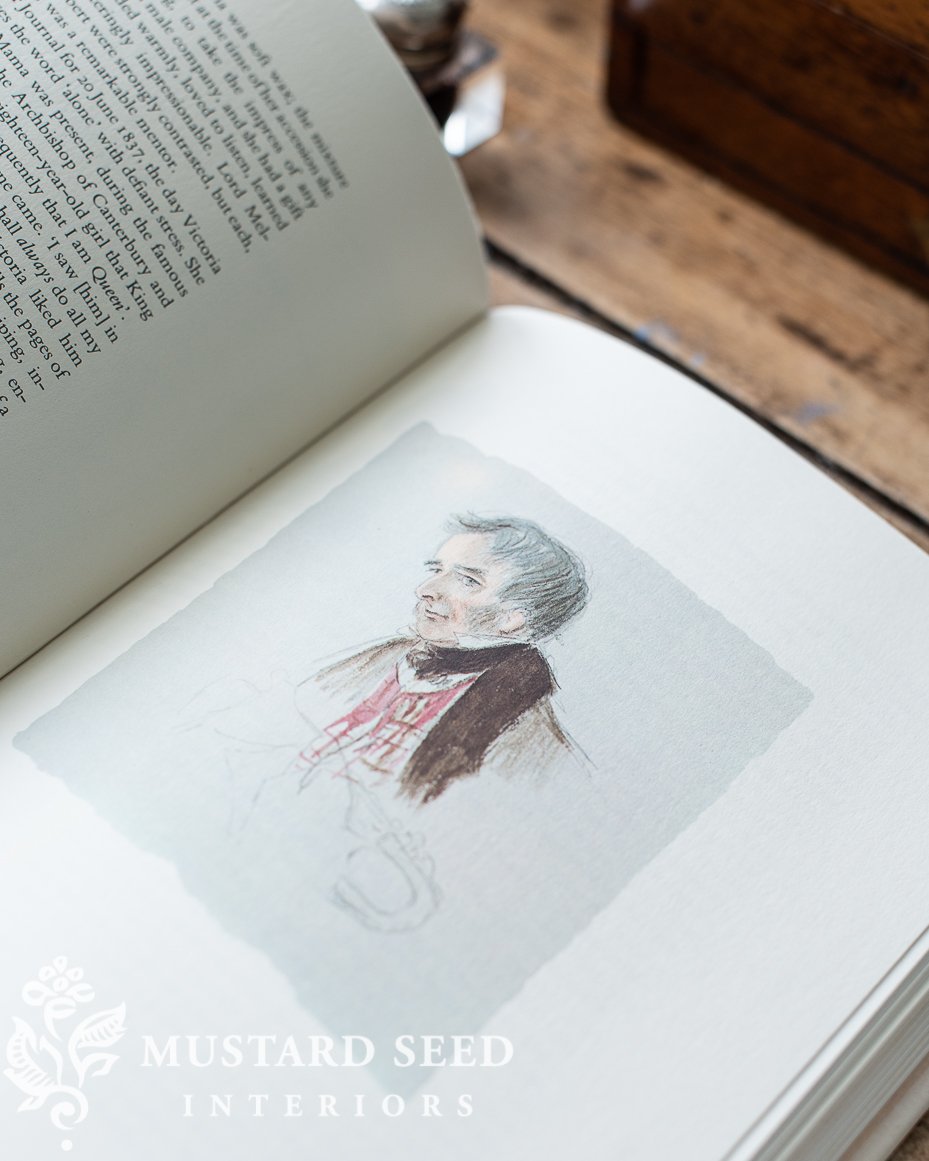 While I agree her work isn’t as accomplished as the other artists who have books on my shelf – Monet, Renoir, Degas, Seago, Pissarro, Sisley, Sargent, Turner, Whistler, Manet to name a few, I find her work to be charming.  There is a sweetness and honesty to it.  In the works that are represented in Queen Victoria’s Sketchbook, which are just a fraction of all of her sketches and paintings, I can see growth as well as exploration of different styles.  In some ways, I see pieces of my own artistic journey and feel a kinship with her. 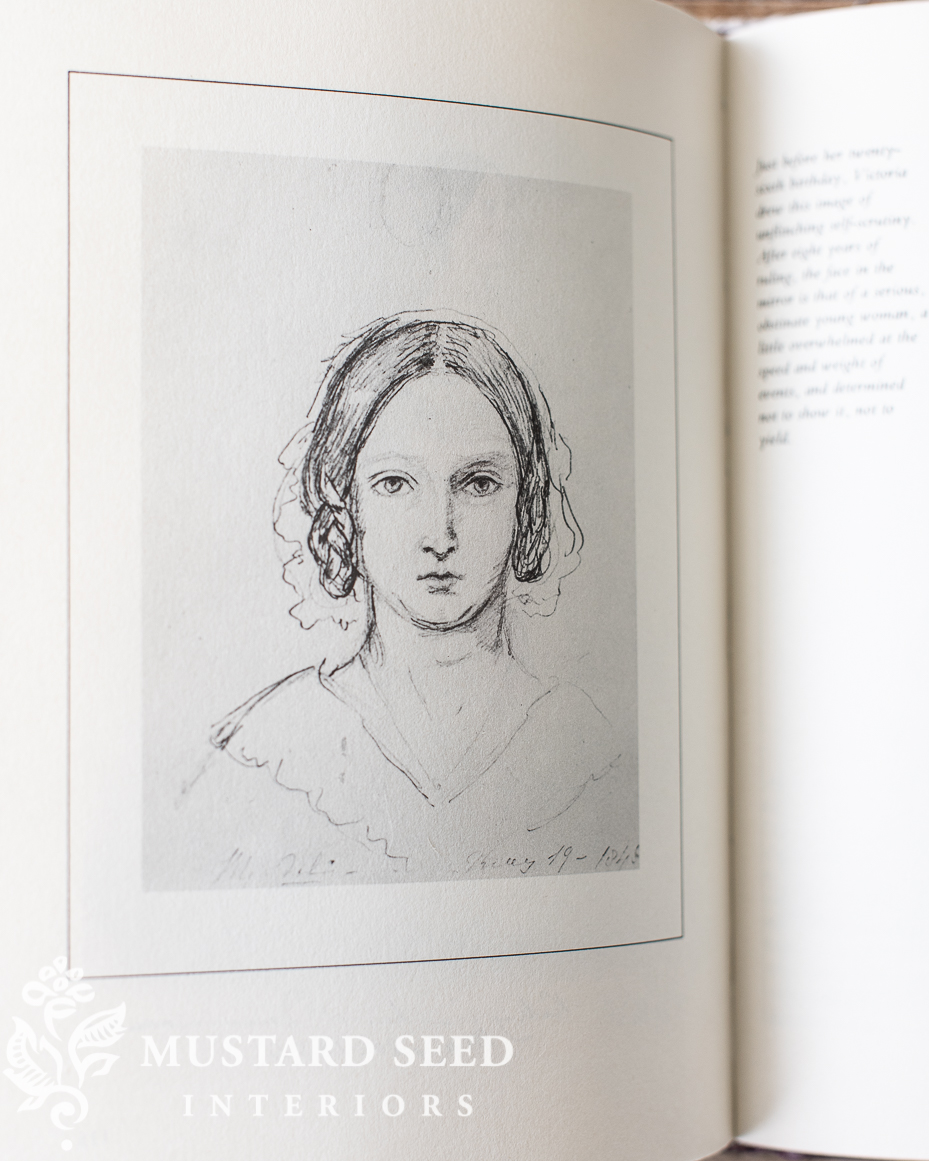 It also made me think about the importance of creativity.  As a queen and a mother of a lot of children, I imagine her life was busy and structured, and she would’ve had to recognize the importance of it to make time to sketch and paint.  Not only did she make time to do it, but she studied under several art teachers over the years to learn and grow.  I admire that. 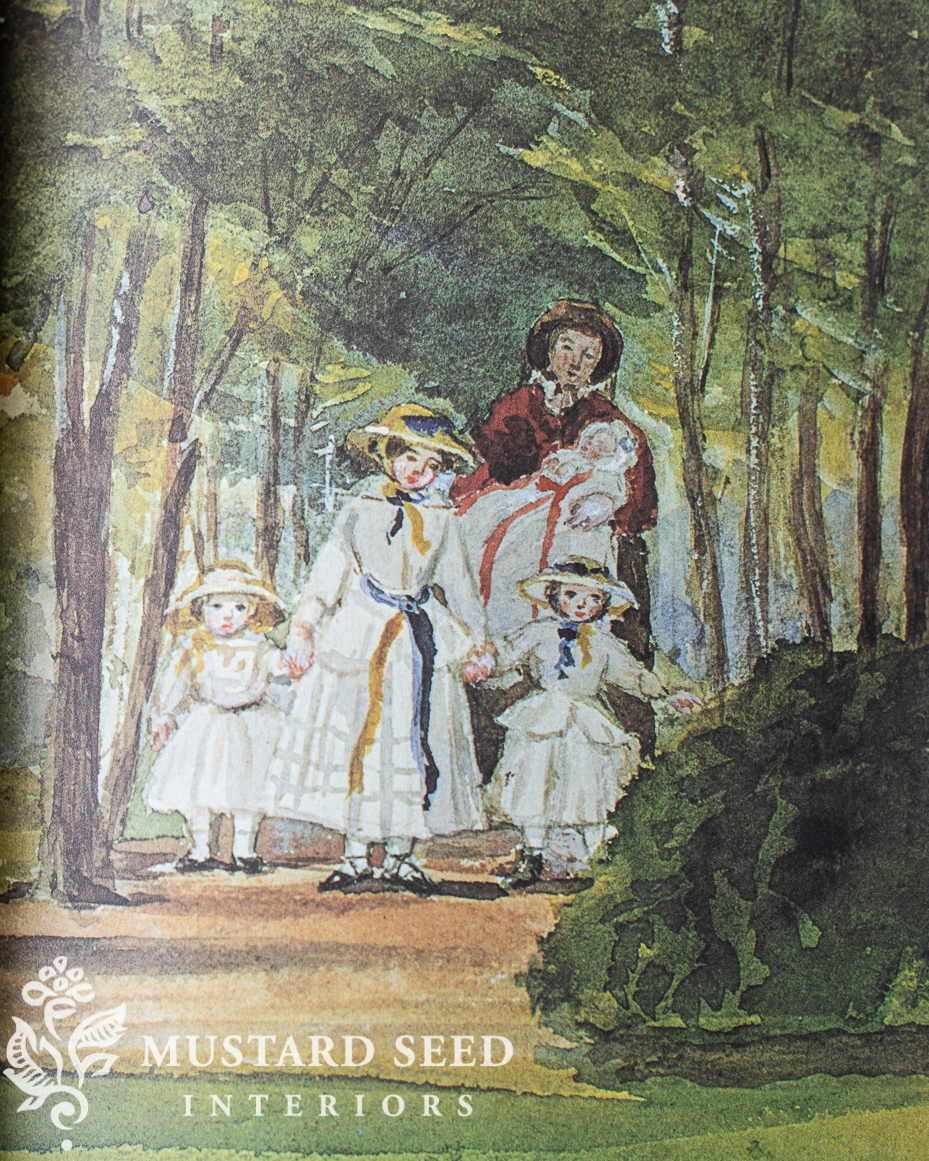 I am looking forward to making studies of some of her sketches and I hope that one day more of her works are published. 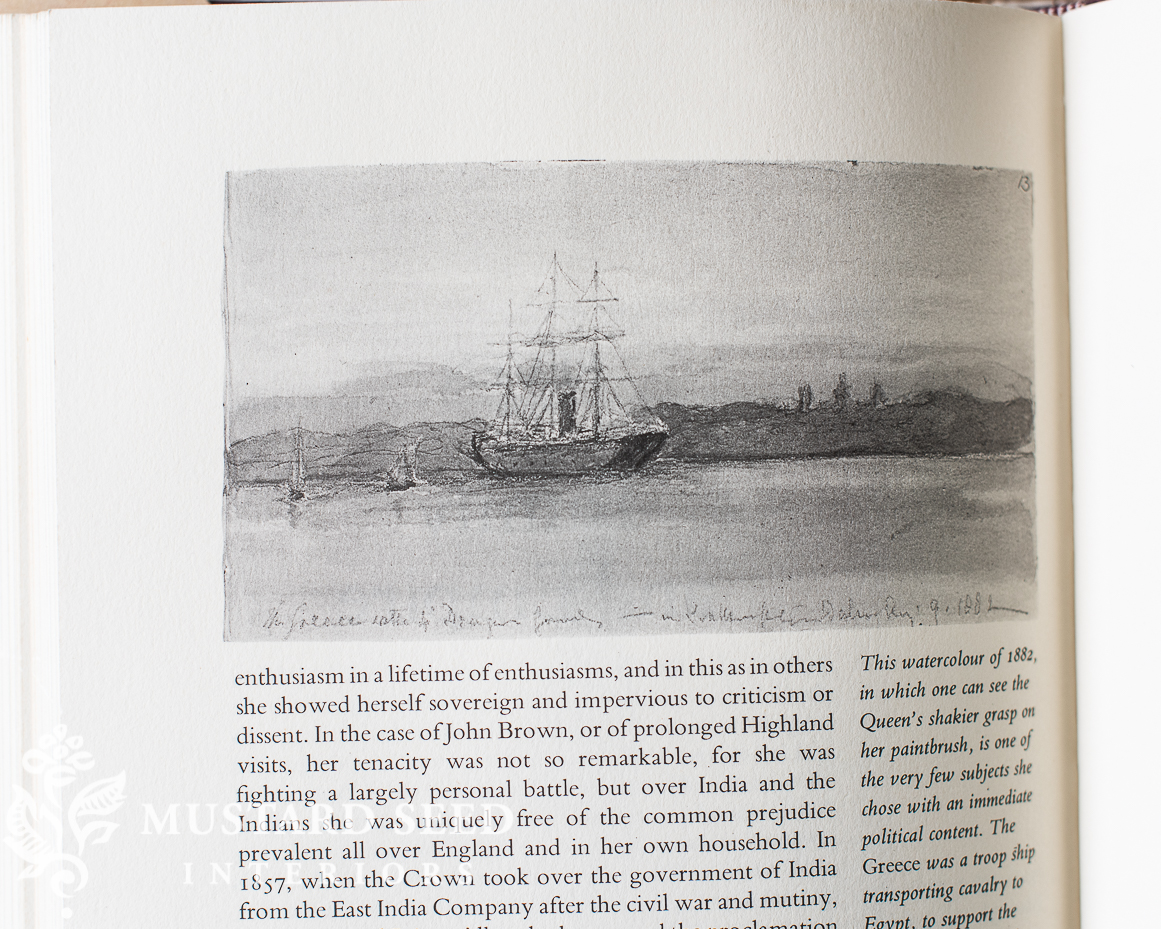 The books is available on Thriftbooks for $10-14 and I would encourage you to get a copy.  (The book is sold out on Thriftbooks now, but there are still some affordable used copies for under $20 on Amazon HERE.)  It has inspired me to write more, sketch more, paint more, just to record my everyday life; to share how I see the world, and to share my own story and it may have the same effect on you.

PS – Did you know Victorian-era boys wore dresses until the age of seven or so?  Not just kilts or robes, but dresses with ruffles and bows.  It’s hard to tell the girls from the boys in Victoria’s sketches and the author explained this cultural tidbit.  So interesting!  As a mom of boys, I can see the practicality when it comes to diapers and potty training!

This is a picture of Franklin D Roosevelt in 1884.  White dresses were considered gender neutral.