Based on the title of this post, I’m officially turning into my great grandmother.  I don’t mind that too much, though, because she was a pretty awesome lady.

Anyway, if you follow me on Instagram or Facebook, you know we adopted a couple of kittens last Saturday.  It was something we’ve been thinking about for a few months and decided this would be a good time, since Jeff and the boys would be home from school and work for Thanksgiving break and we’d all be able to bond with them and help them adjust.

We went to the cat adoption day planning on looking and perhaps picking out a pair of kittens if we found the right ones.  We knew we wanted siblings and older kittens – about 4-6 months old.  We were also hoping for cats that had been around dogs before, so they wouldn’t completely freak out about Sebastian.  There were several kittens at the adoption event that fit that description, so it was just a matter of interacting with some to see which ones “felt like ours.”  The volunteers pointed us to some kittens who were still with their siblings and/or littermates or ones that were bonded and they were hoping would stay together.

Jeff and the boys gravitated towards a trio of playful tabby cats.  And these were kittens that really needed a home.  They had been removed with 27 other cats from a pet hoarding situation by animal control just a few days prior and this adoption organization was trying to save as many as they could.  They had been fixed and treated for their immediate health issues, but they still might need additional treatment and they definitely needed a lot of TLC and a few good meals.  They were friendly and eager for affection and the boys were smitten.  It was hard not to adopt all three, but we decided to adopt the two girls.

Because these cats were from animal control, they were eager to get them in a home, so they expedited the adoption process and were able to clear our application that day.  The morning plan to look at cats and apply to adopt a couple later that week turned into a full day of setting up our house for kitties and spending time with them in the “cat room”.  We set them up in the sewing room, so we could observe their health and behavior and they had some time to adjust to us and the smells in our house.  They had been through a lot and just needed some stability and to feel safe.

We named the kitties after two characters from A Series of Unfortunate Events, a story we all enjoyed, Violet and Esmé. 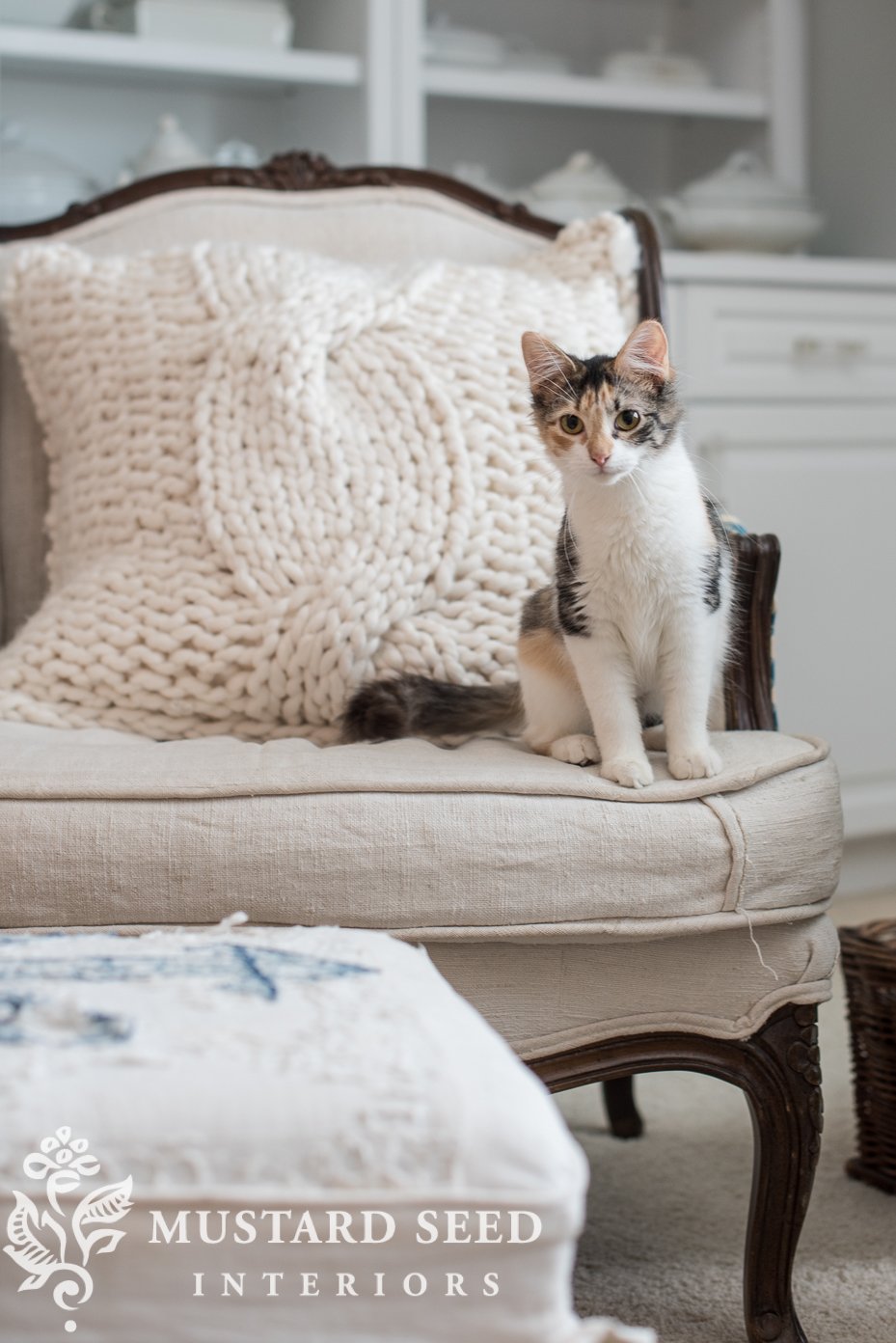 She was the one Jeff and the boys picked out first because of her unique marks.  She looks like a cross between an orange tabby and a gray and black tabby, but her spotting looks like a calico.  I learned she’s called a caliby, a tri-color calico with tabby patterning. 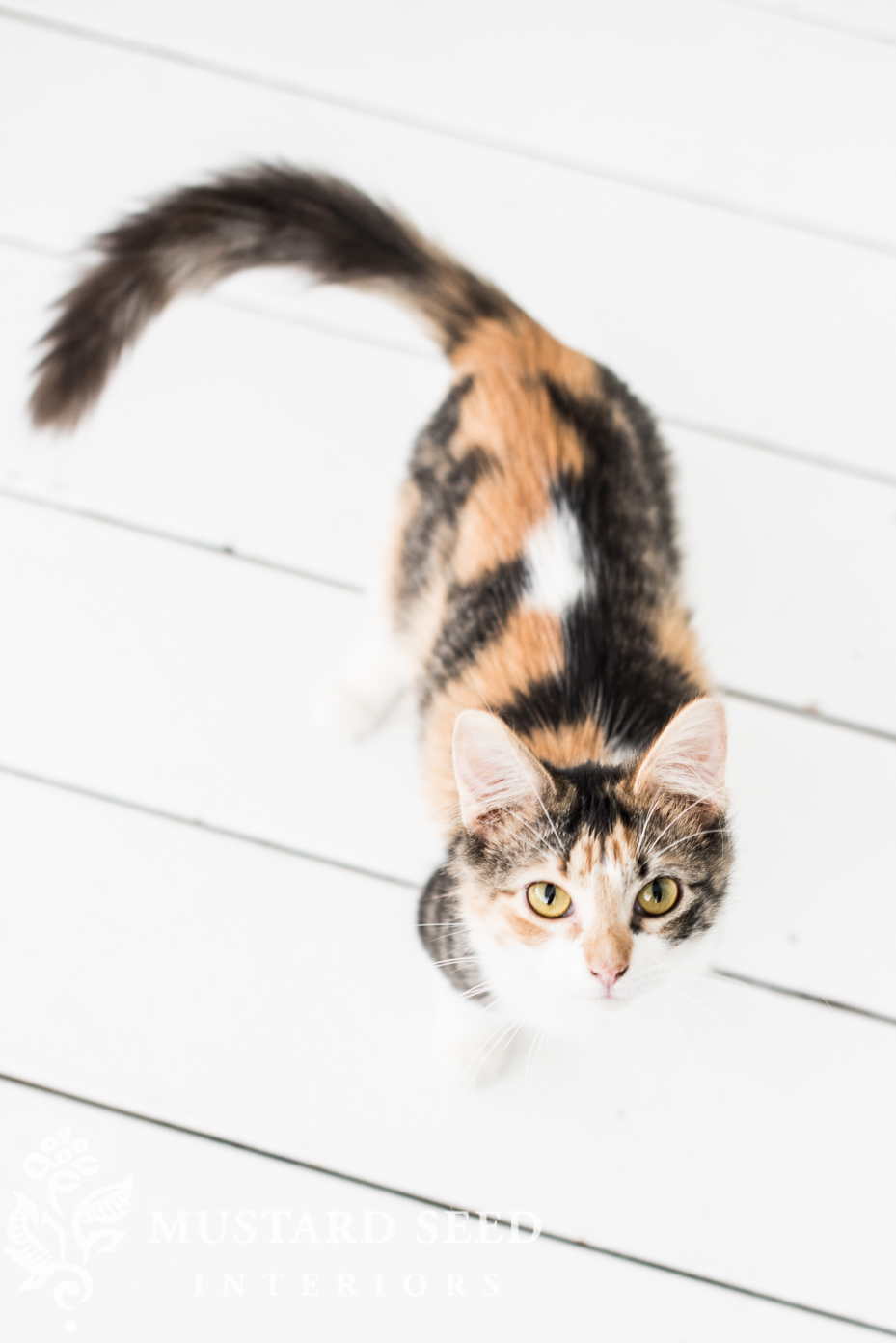 She is friendly, affectionate, and warmed up to Sebastian the quickest.  She is a talker, too!  Now that she’s more comfortable in our house, she’ll follow us around meowing for attention or small pieces of boiled chicken.   (I’ve actually been boiling rice and chicken for the cats for treats and “wet food” because the vet said it’s easy on their stomachs.)

Esmé is so sweet.  She does have a hiss on her, though, and she used it when she first set eyes on Sebastian.  She has been very affectionate with us, though, and is quite the snuggler. 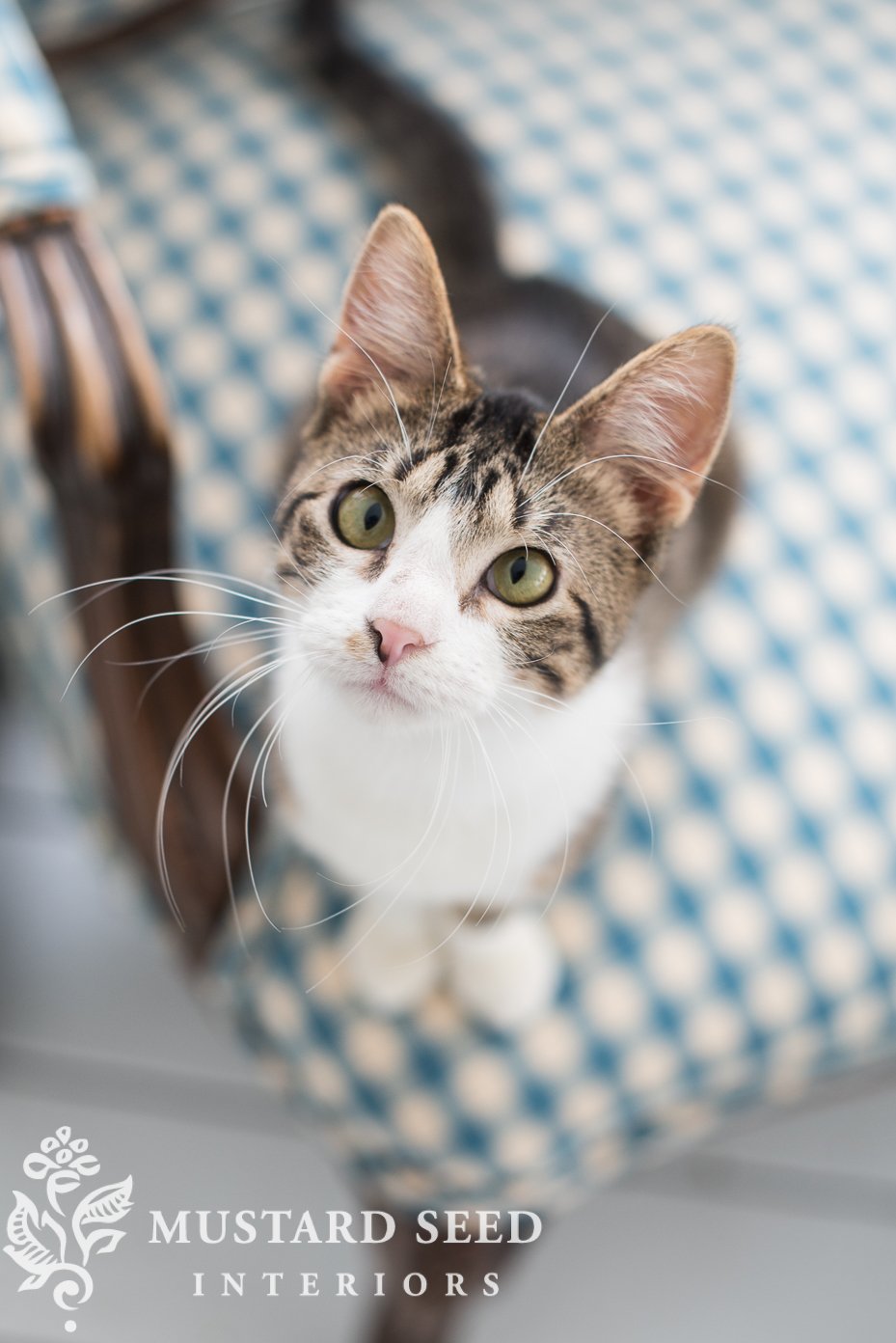 We ended up having to take her to the vet after a couple of days of observation and she needed to be on antibiotics and some other medicine to treat some digestive issues remaining from being in a crowded, unhealthy environment.  She’s already doing much better and we’ll take her in for a follow-up in a few days.

(I do want to say that I am sad for whoever owned these cats.  It must’ve been very difficult to have animal control remove them when that person probably felt like they were giving all of these cats a good home.  I hope they are getting some support, too.) 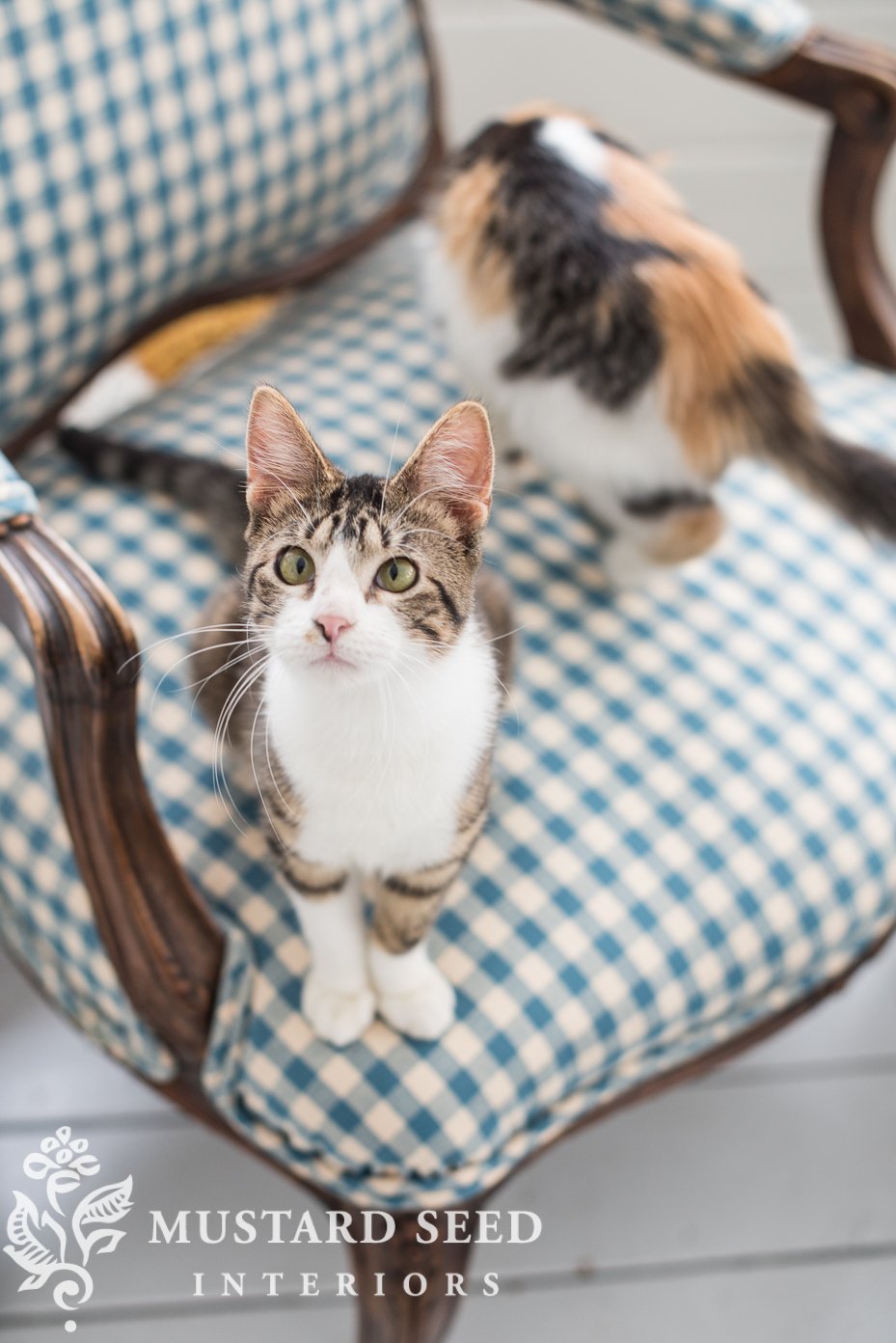 Both cats have put some meat on their bones and they are making themselves at home.  They have been enjoying the Christmas decorations, some a little too much!  They were wrestling in the wooden village tree collar and broke a small piece, so I decided to put that away for this year.  Esmé also picked apart my homemade advent wreath, so I’ll have to get creative and do something different.

It was all packed away with a smile and a shrug, though.  Both Jeff and I grew up with cats and we know that minor adjustments have to be made, especially when they are playful kittens.

And Sebastian has been amazing with the cats.  He almost looked wounded when they were afraid and hissed at him, because he was ready to meet them with his tail wagging!  We adopted Sebastian from a cat sanctuary, so he was very well-behaved with cats.  Esmé and Violet have both warmed up to him, though, and the three of them will follow me around like a parade.  They are not quite snuggling or playing with him, but they will sniff him and aren’t afraid to walk past him now.  I think it’s helped that I feed them all pieces of chicken together.  Treats go a long way! 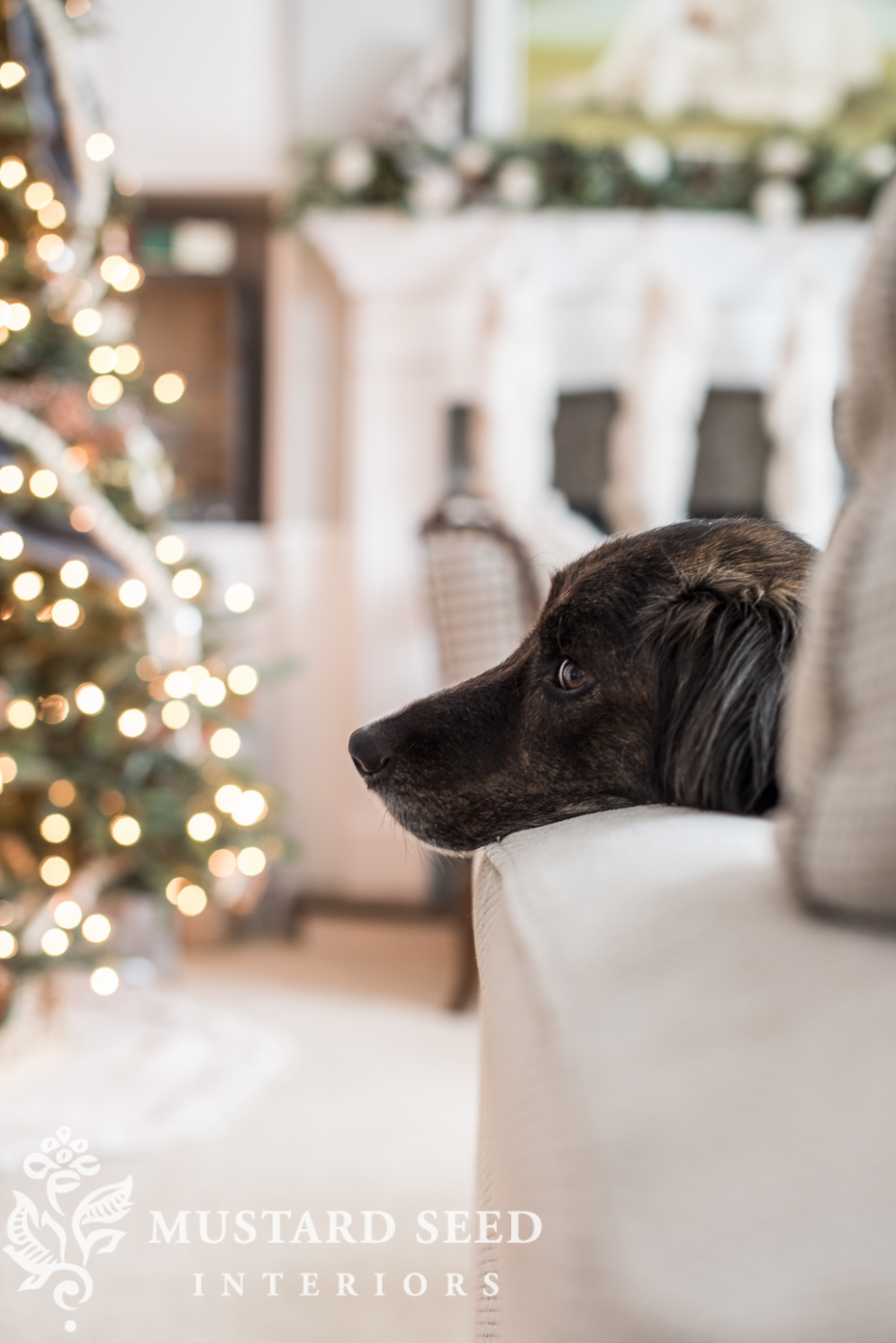 And, I’m still crocheting away!  Even with cats chewing on my yarn and batting at the hooks.  I’ve made several dishcloths to practice stitches… 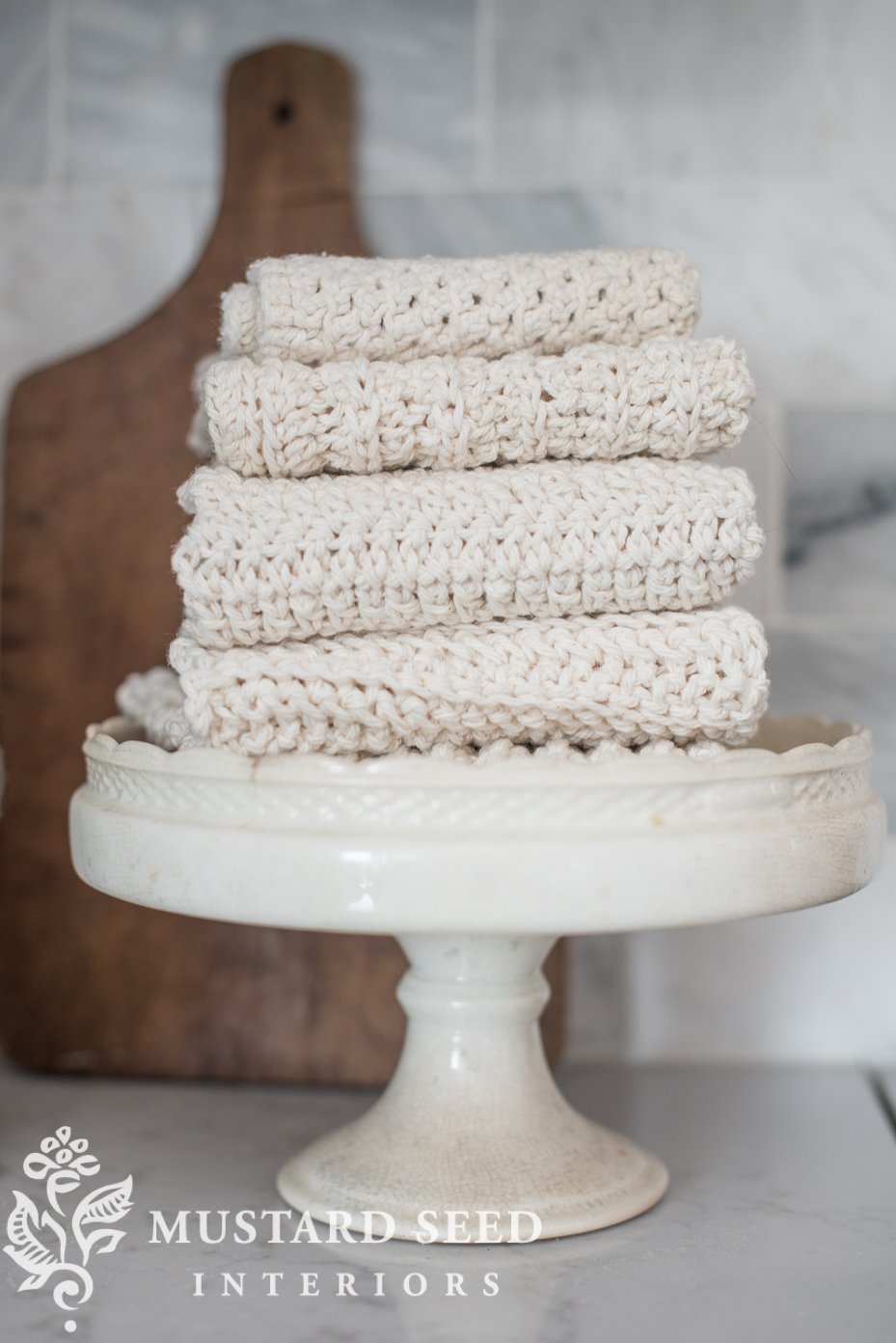 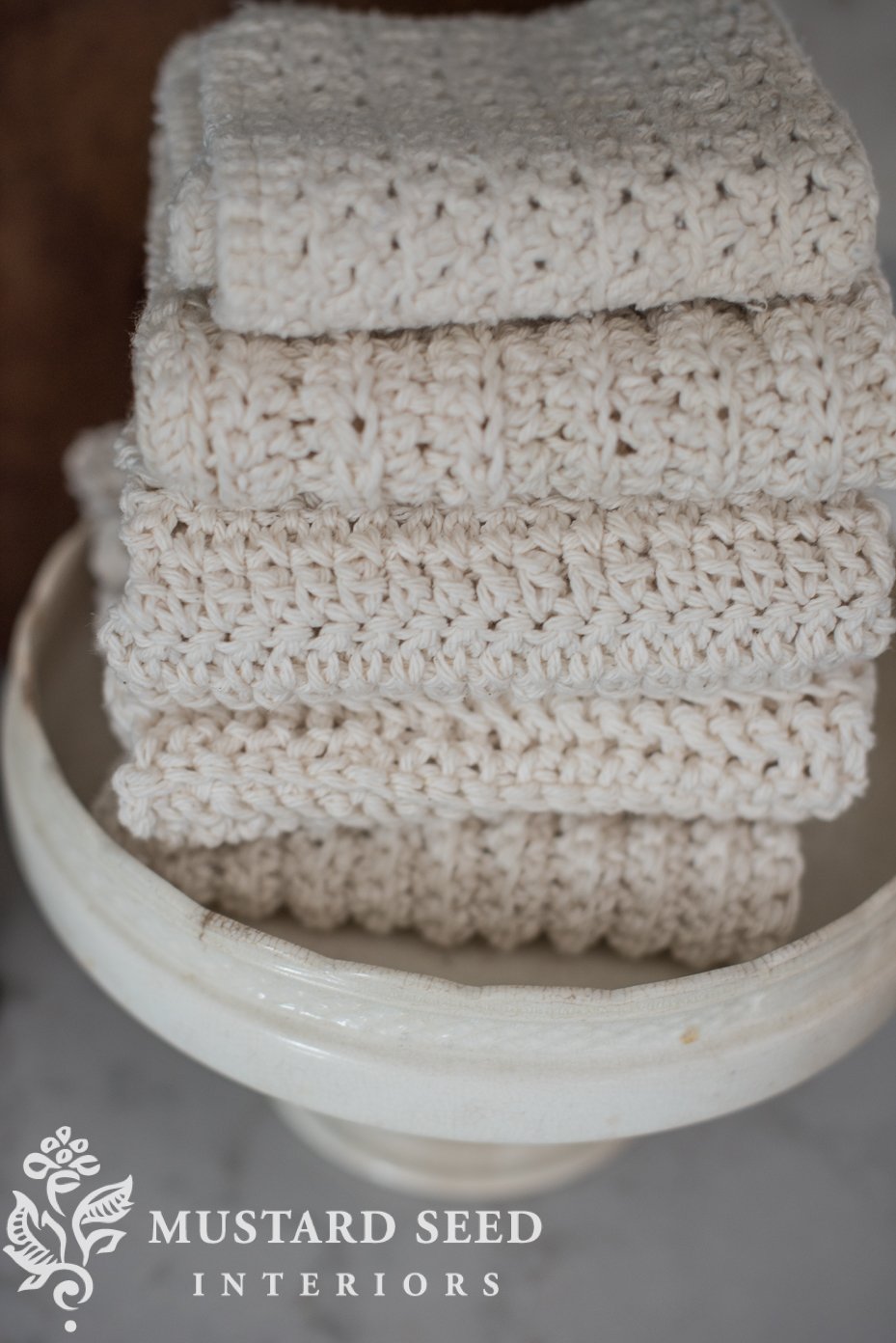 …and even made a couple of “cat nests” with some chunky yarn I already had on hand.

I told Sebastian not to be jealous and reminded him that I made him a bed and he ate it.  True story. 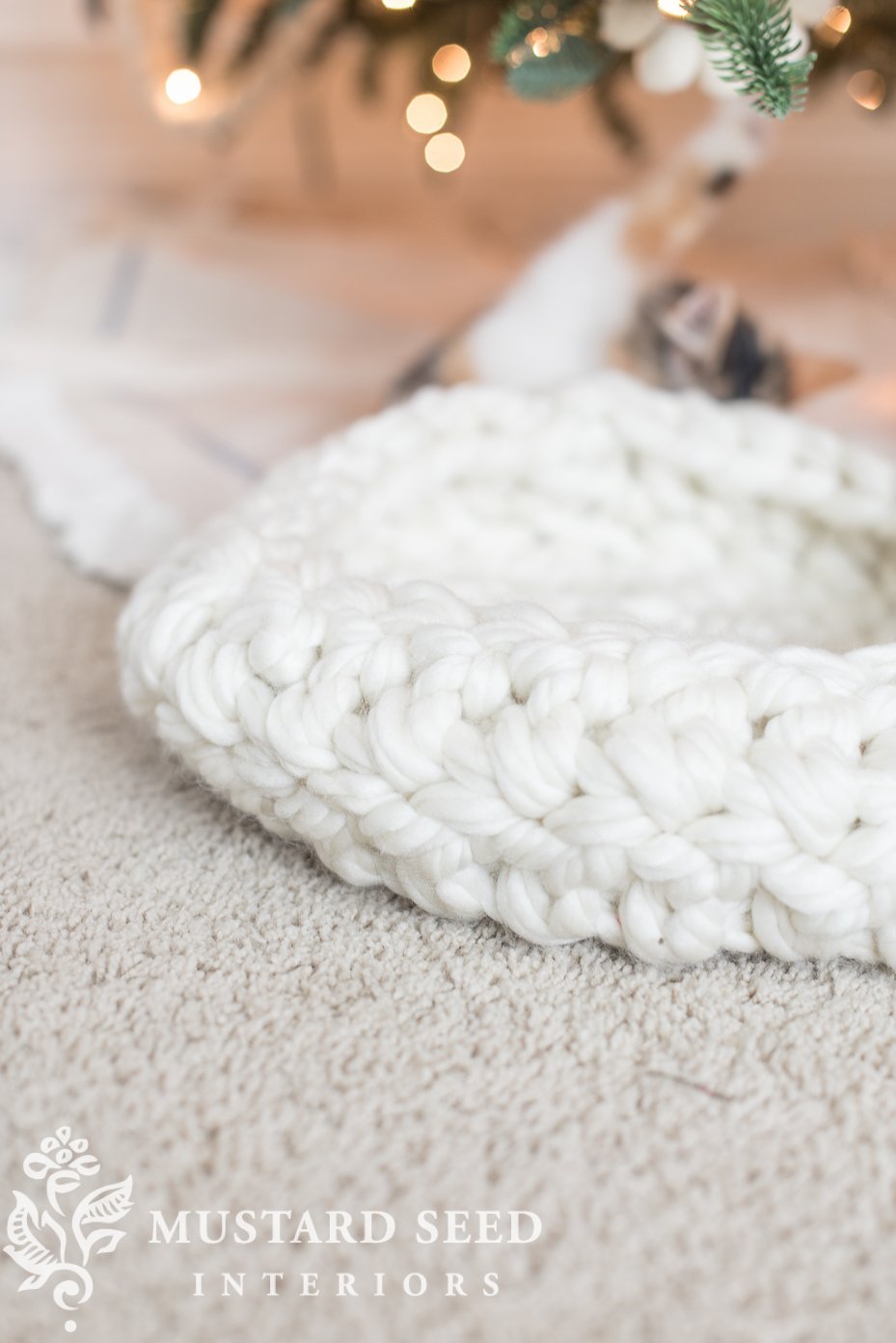 The cats have sat in them here and there, but haven’t quite taken to them, yet.  They were quick and easy to make, though. 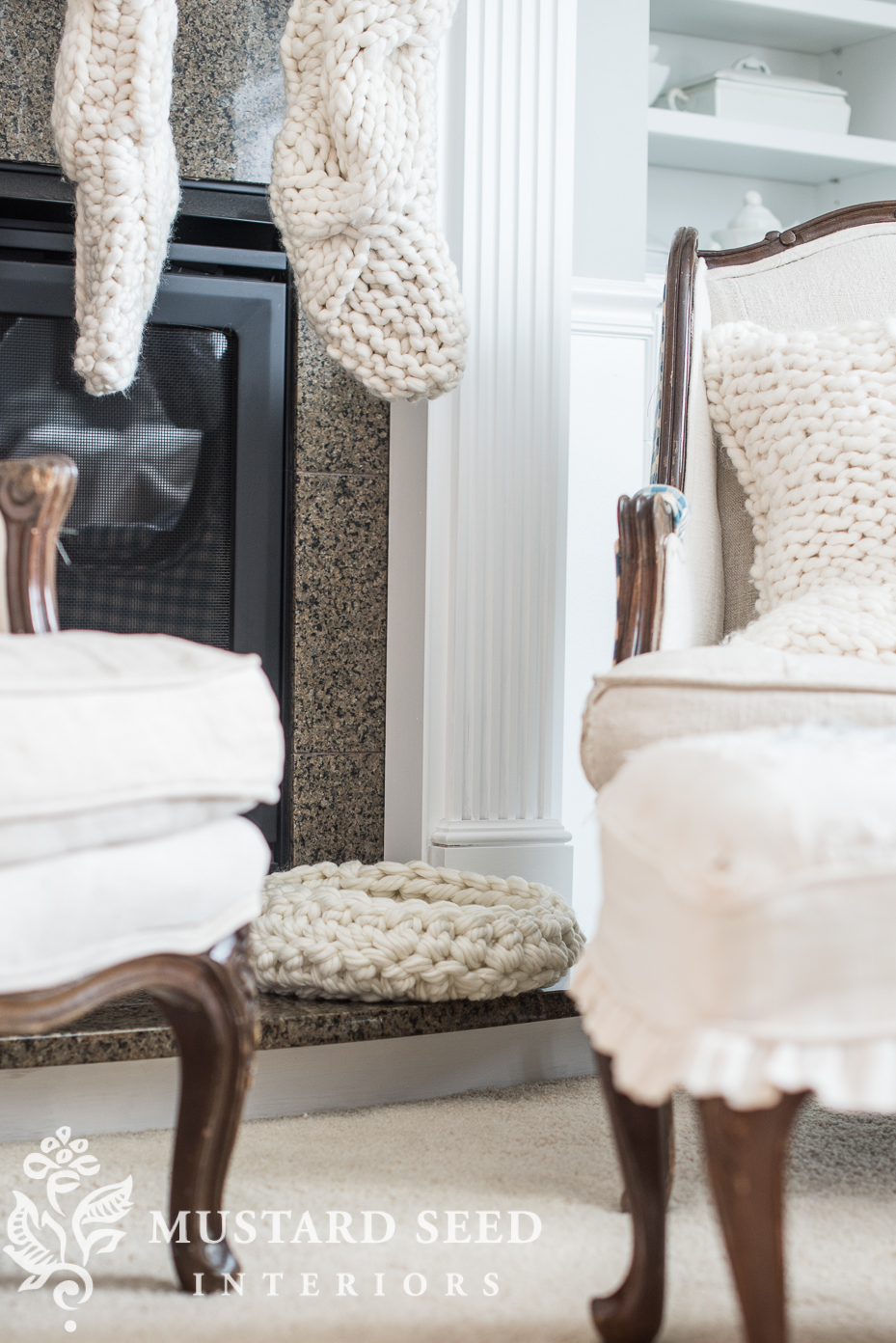 During the quiet week, I also worked on making glass cozies (we seem to be the only people who called them “socks”), as my great-grandmother did, but I have yet to find the perfect yarn.  Everything I’ve tried has either been too thick or too thin.  I bought some more options on Friday, so I’ll give them a try.

And, I’ve decided to make a granny square afghan out of chunky cream cotton yarn.  I love making granny squares!  This one will mostly be for practice since the chunky yarn is forgiving and then maybe I can make one out of finer yarn when I get better. 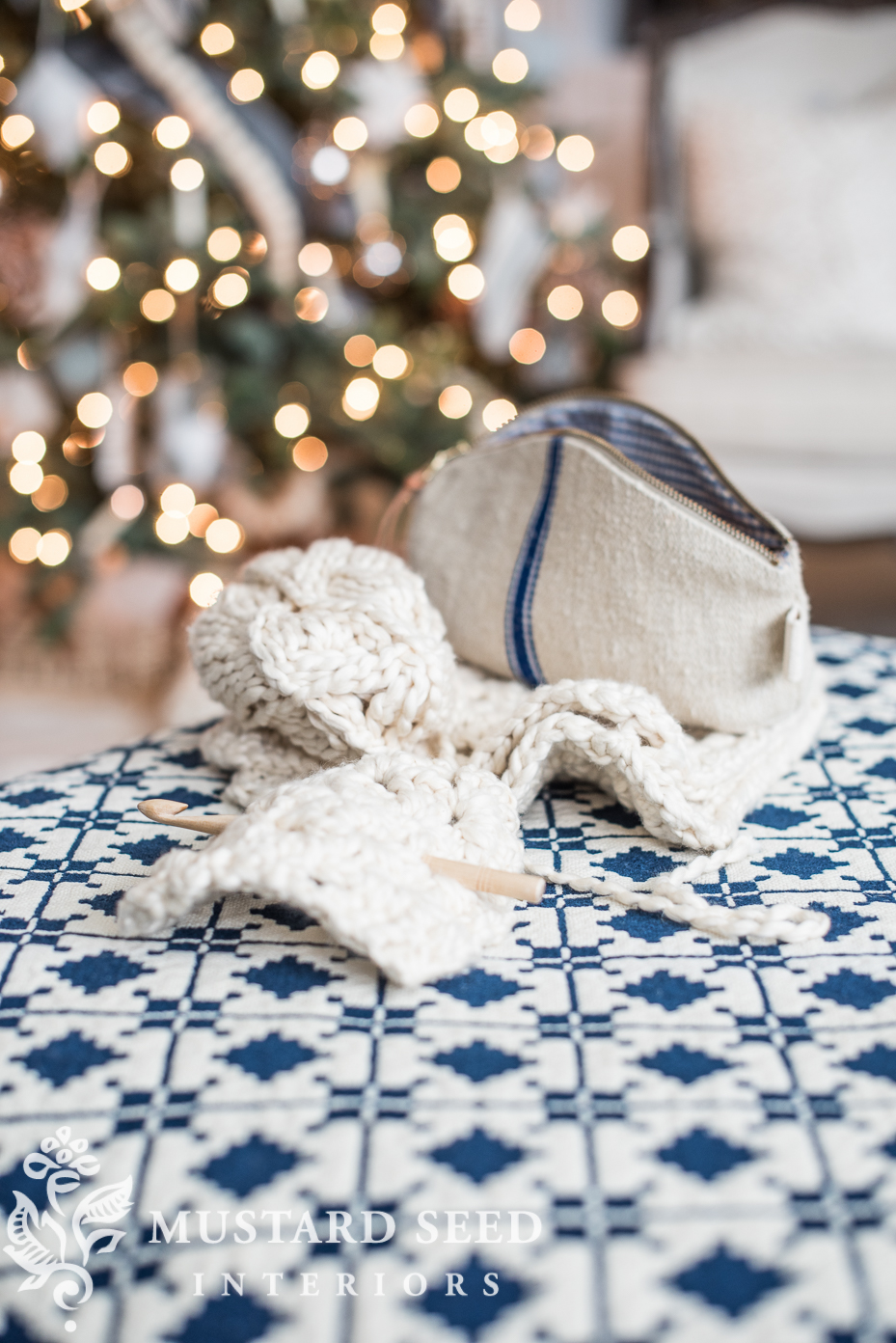 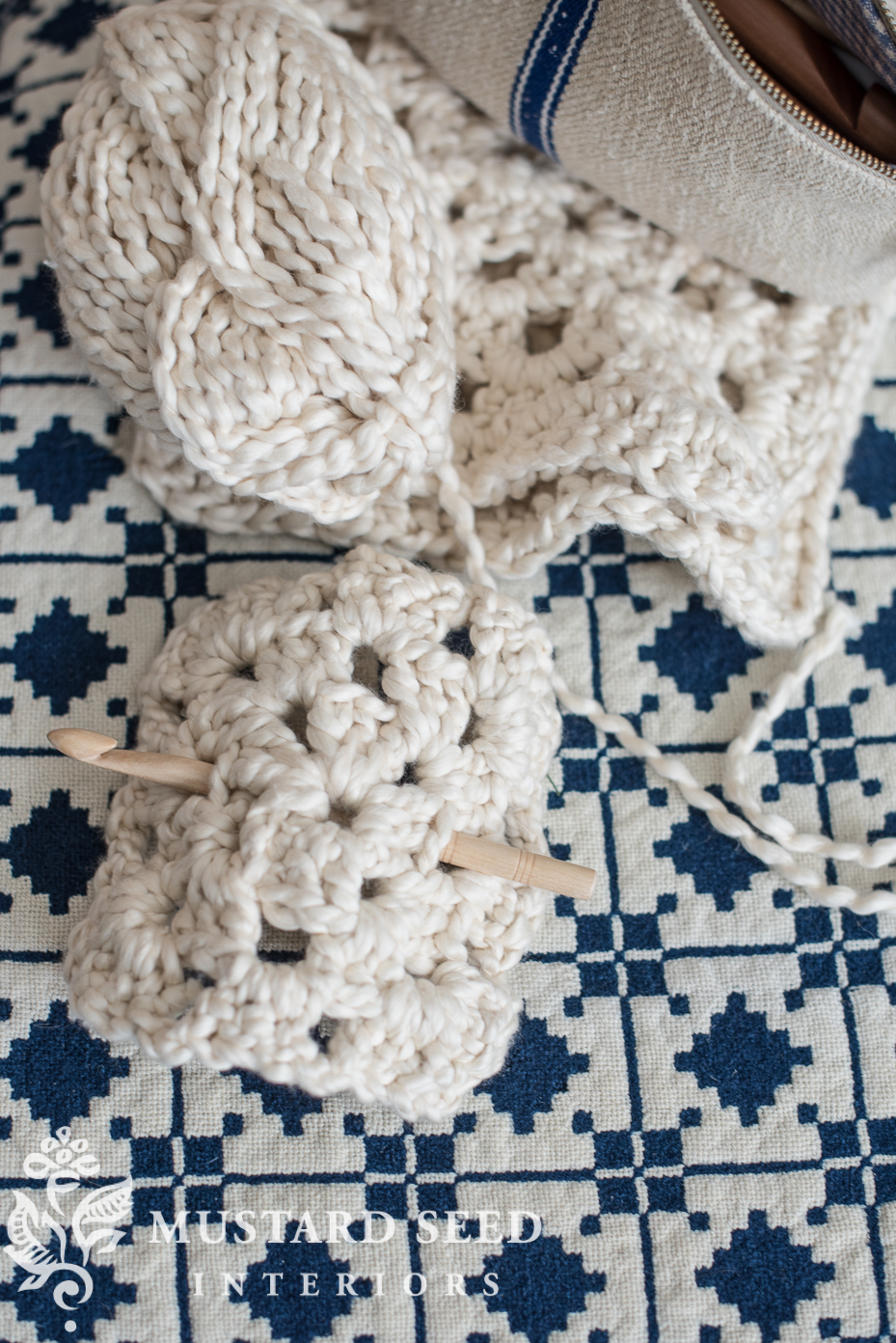 I picked up a couple of beginning crocheting books that have really helped with learning stitches and techniques.  It really is a fun endeavor, because once you learn the basics, there is a ton of stuff you can do!  I know my work isn’t perfect, but I’m just enjoying the process of learning and making things…