When I shared about antique and vintage art supplies in THIS POST, I also did a bit of window shopping to share some listings on Etsy and eBay.  Well, my window shopping turned into actual shopping when I found this set of antique pastels listed for a great price.  It was purchased by the seller at an estate sale in Scotland and it just spoke to me.  I snapped it right up!

Unfortunately, when it arrived, it wasn’t packaged as well as it could’ve been and one of the pastels (it looked like black or close to black) was pulverized and made quite a mess.  It was all over the inside the of the box, the bubble wrap and the interior of the box.  I receievd a partial refund from the seller for the damage to the set, which I was happy with.  I now had to go about cleaning up the set, so I took advantage of an unusually warm November day in Minnesota to get that done. 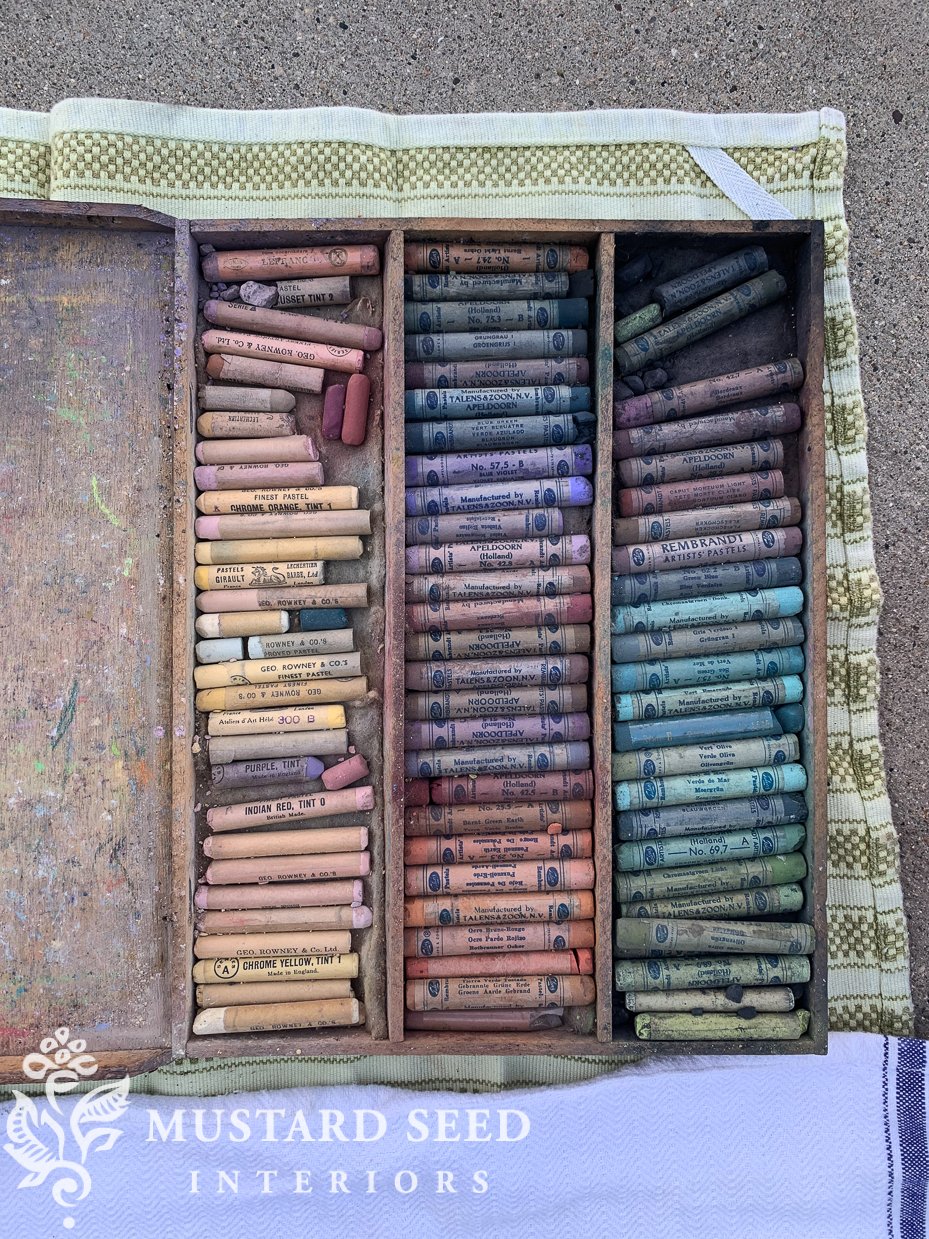 I did some research and there are several methods for cleaning pastels.  One of them involved rolling the pastels in cornmeal, which looks to be pretty effective.  Instead, I followed the method of just wiping them down with paper towels.  Since I was working with antique and vintage pastels, some of them containing lead and other toxins, I wore a mask and gloves.  It was amazing how much brighter the colors were once they were wiped down and I sort of loved the process of “getting to know” each one and I’ll share more about what I discovered in a minute

Once they were cleaned, I stored them in a plastic bin while I thoroughly cleaned the box.  I vacuumed the dust and wiped it all out with a damp paper towel.  Once it was dried, I waxed the exterior of the box to hydrate it and bring it back to life. 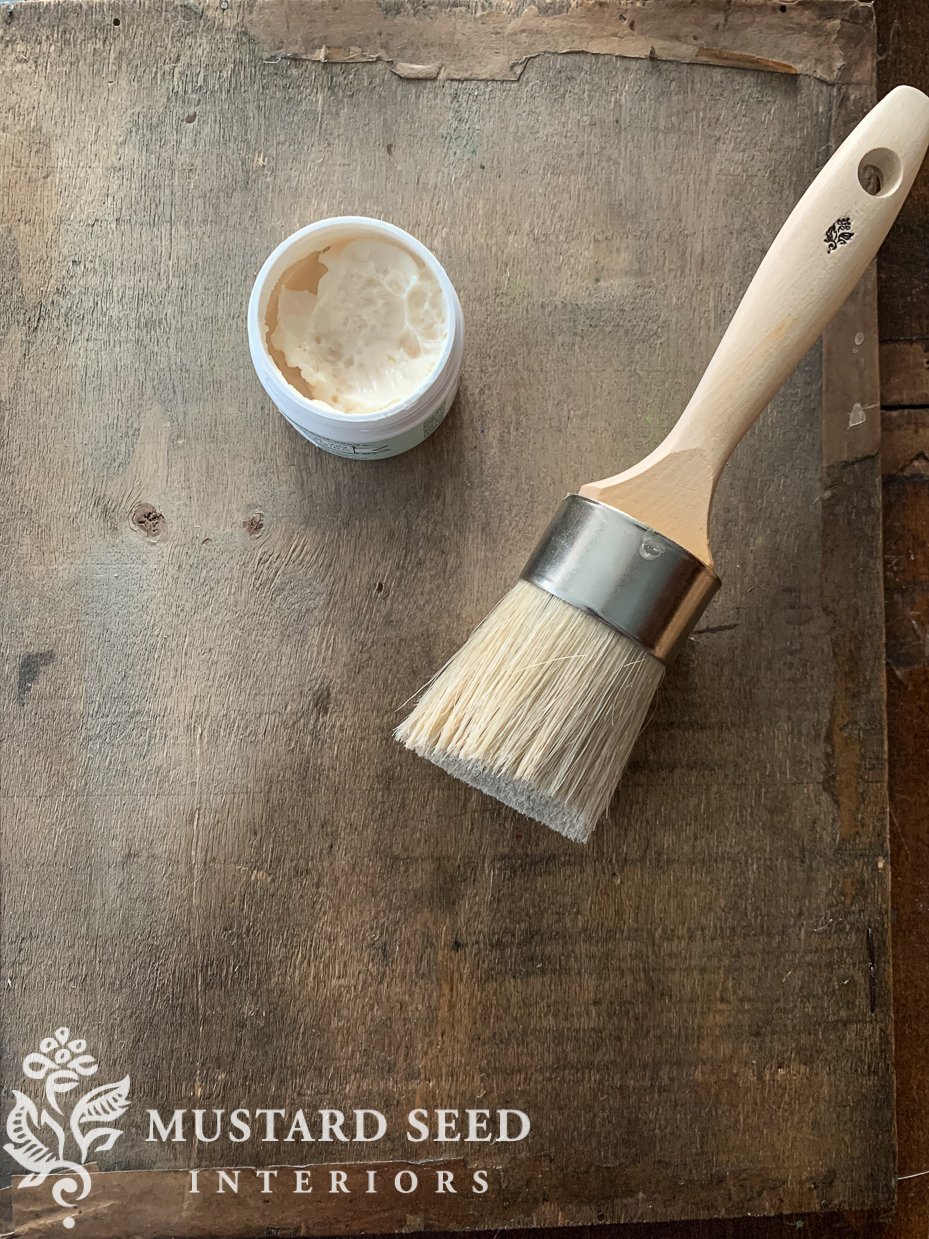 Here is how the box looked before… 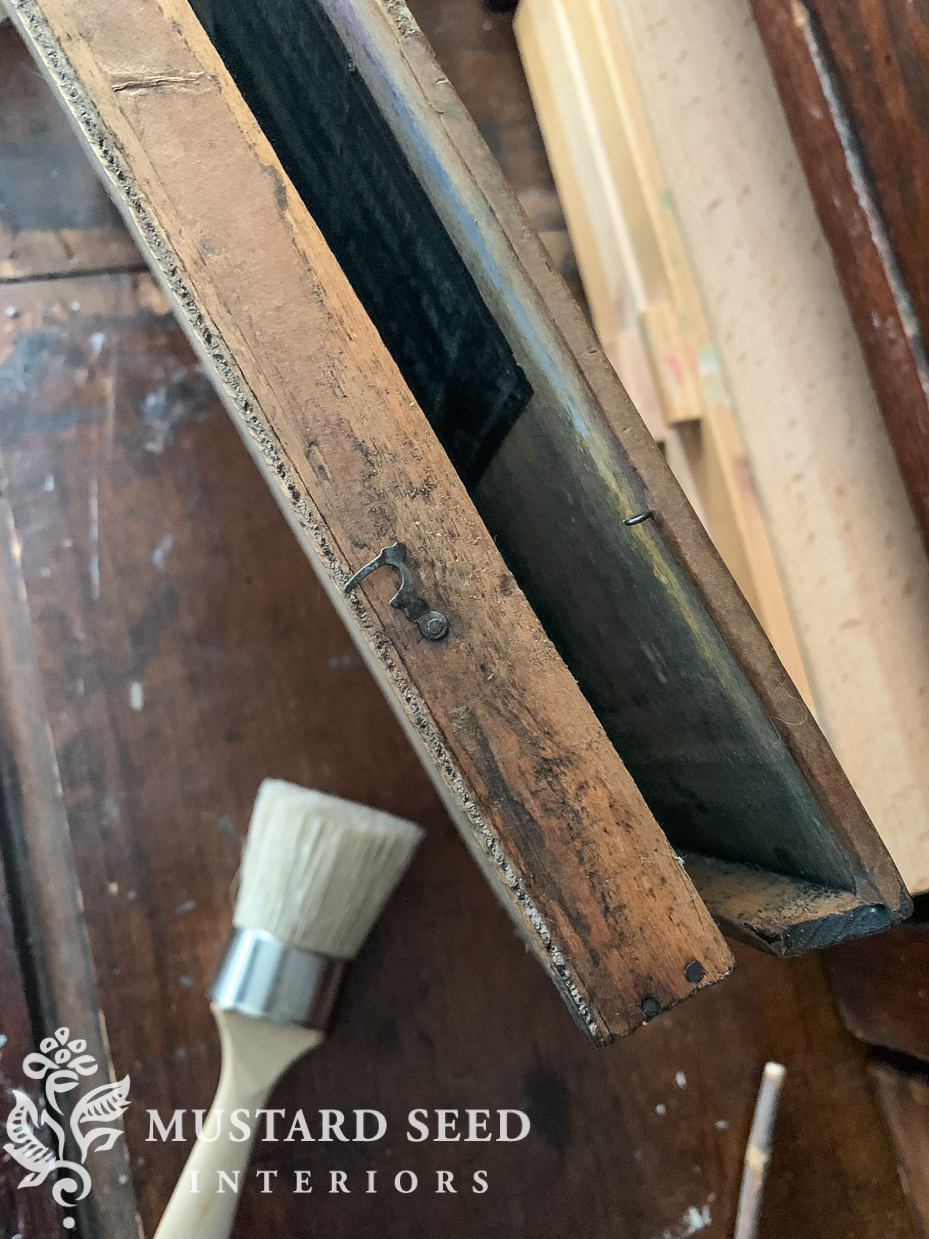 …and after the wax… 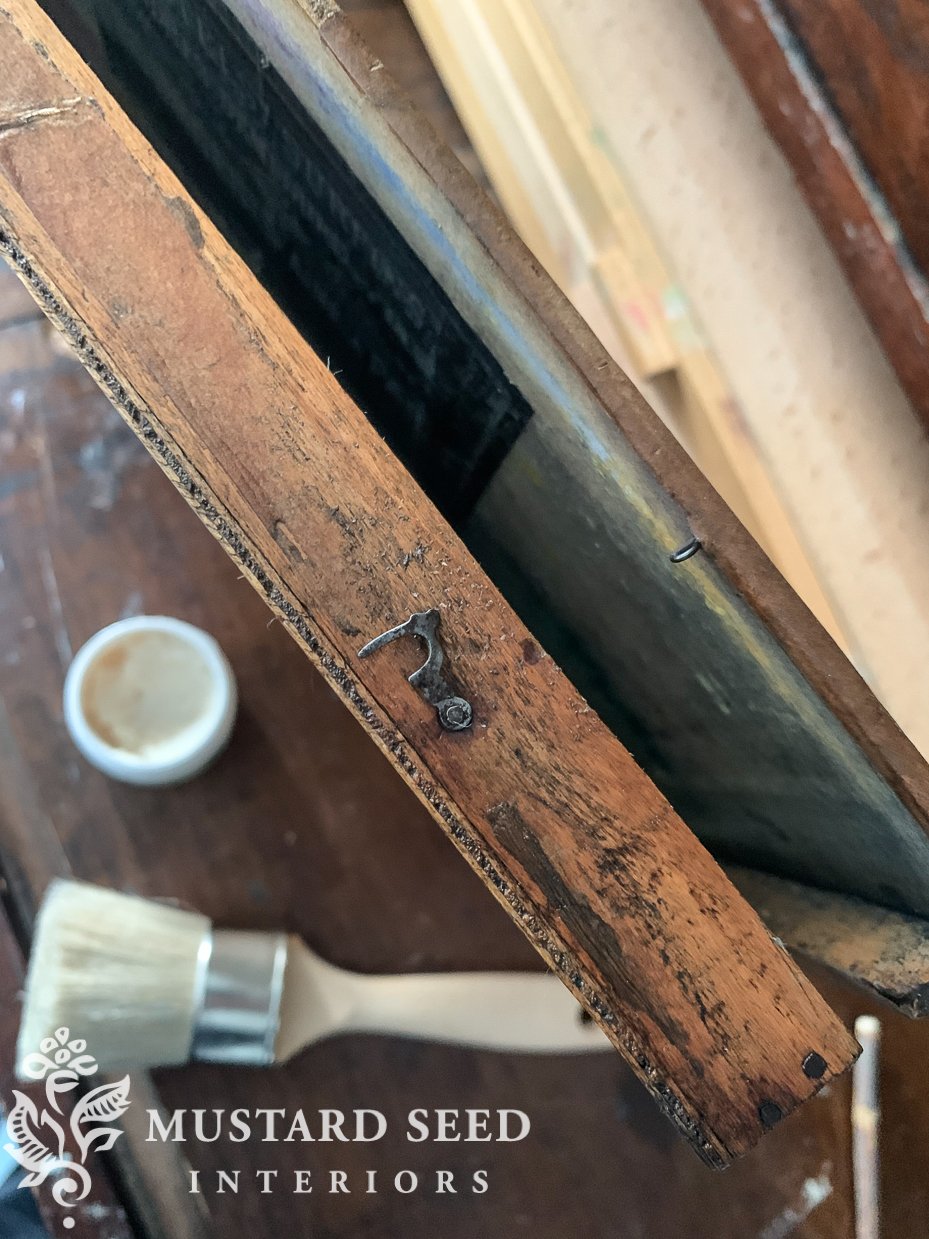 The wood is richer and it feels nicer to the touch.  The wood box is relatively rough, so it benefitted from a good rubbing with wax.  I could’ve taken it a step further and sanded it a bit, but I decided against that.

The box looked so much better after a good cleaning! 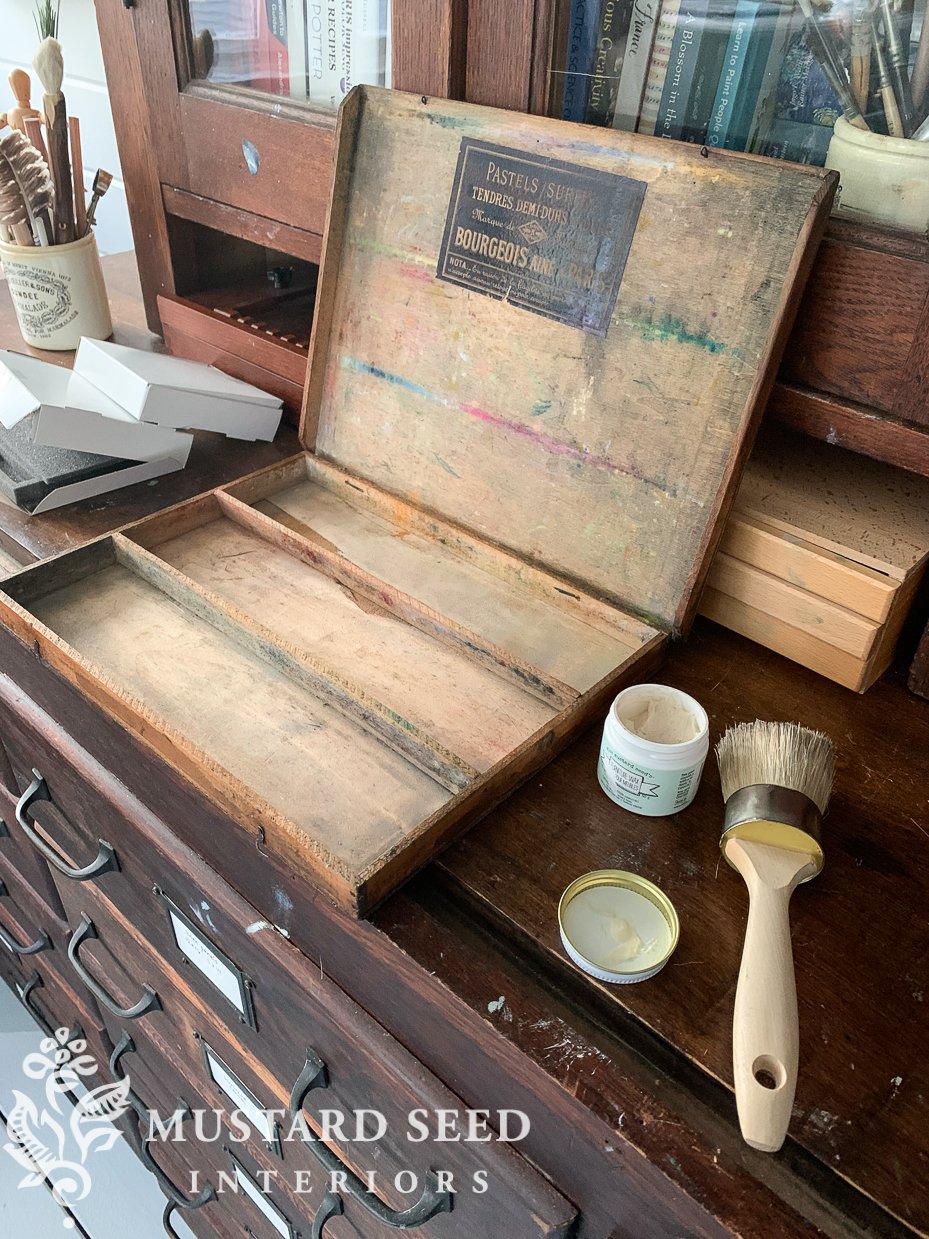 Through the process of cleaning and organizing the pastels, I learned that three different brands of pastels came in this box.

Rowney & Co dates back to the 1700’s and I believe those pastels might be the oldest.  The majority of the Rowney pastels, particularly the reds, have lost some of their pigment.  Vermillion and Crimson Lake, which are both vibrant reds, look like pale pinks.  I’m not sure what that means exactly, but I know that pastels are made from pure pigment and a binder, so the fact that they have faded is a little puzzling.   I’m guessing age and/or exposure to light caused the fading. 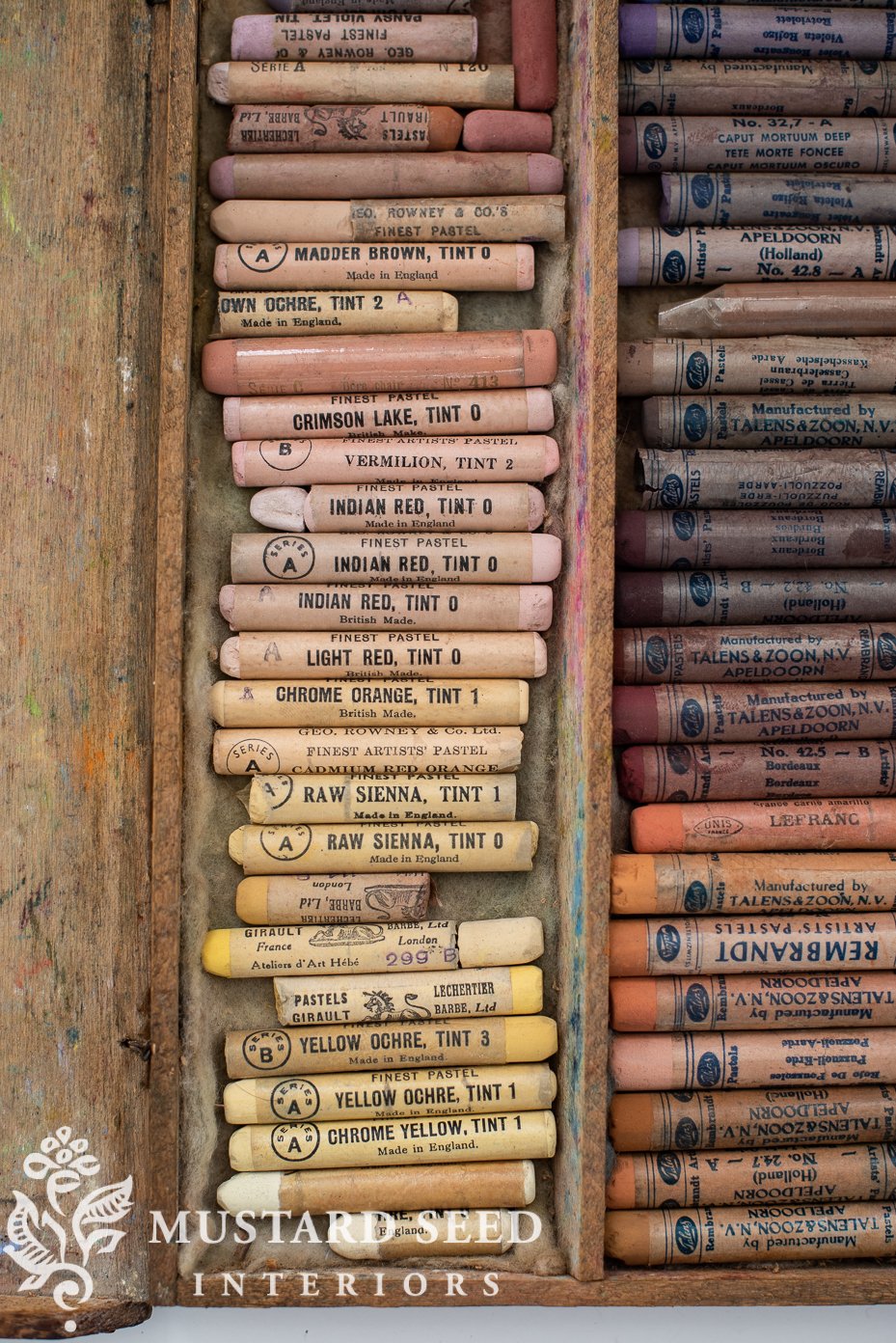 The bulk of the pastels are made by Rembrandt, which did not start making pastels until the early 1900’s and these look much newer than the others.  I couldn’t find any information on dating vintage and antique pastels, so I’m not sure of their exact age.

There are only a few, but the third brand is LeFranc.  So, the interesting thing is that the box is labeled Bourgeois Ainé Paris, which is a company that was founded in 1867 and merged with LeFranc in 1965.  So, which pastels are original to the box, if any?  I wasn’t able to find which pastels were originally sold in this Bourgeois Ainé Paris box.  Maybe all of the originals were used and slowly replaced over the years. 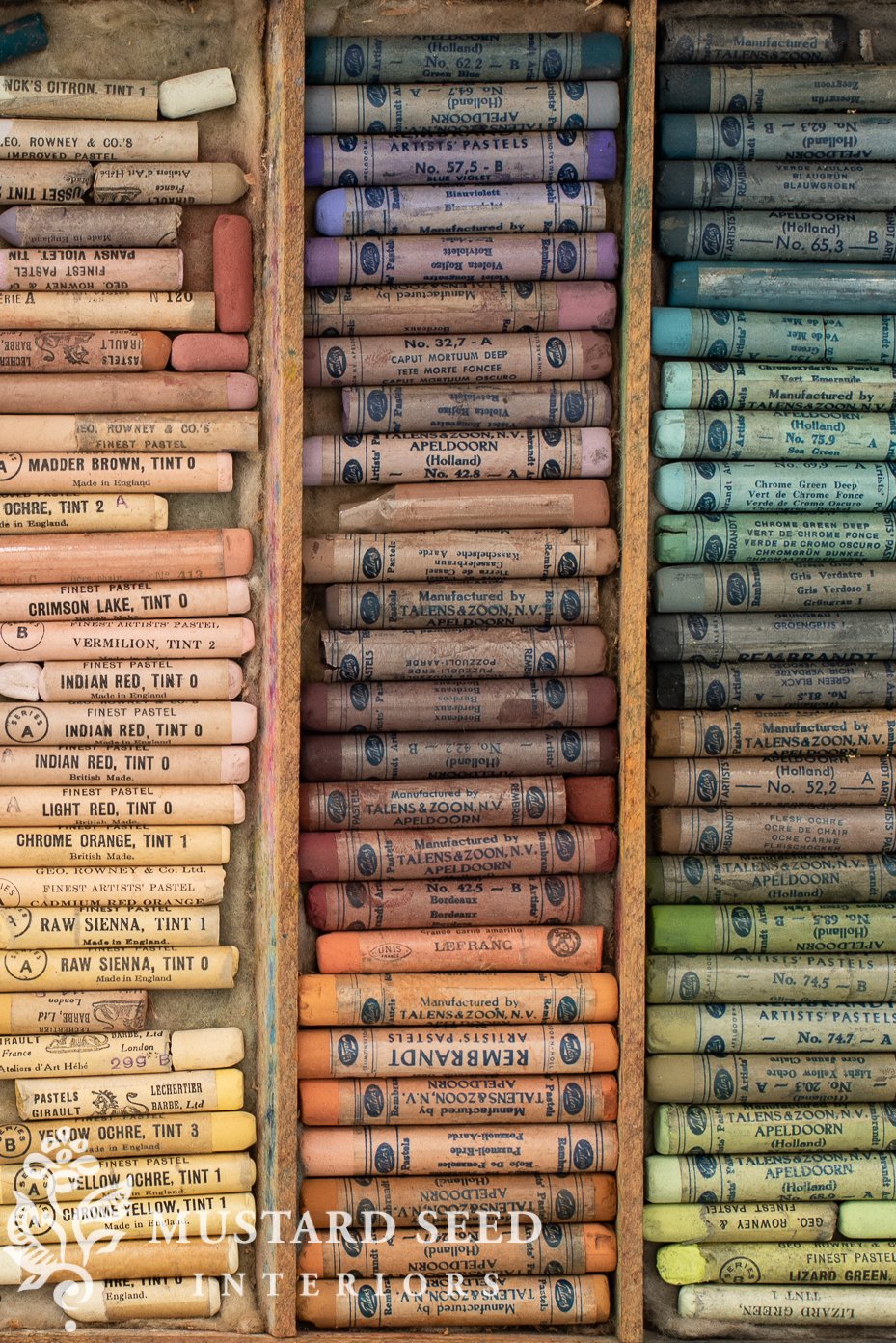 Based on my research, I would be comfortable using the Rembrandt pastels, but I’m a little wary of using the Rowney of LeFranc pastels. The Rowney pastels clearly contain toxic metals like lead and cadmium.  When pastels are used, they create dust which can be inhaled and that is when lead is harmful.  I’ve considered storing those pastels in a separate box and just filling this box with pastels I can use.  In fact, that’s probably what I will do.  I believe in using things, even old beautiful things.   And, what a joy it would be to open this box and start creating. 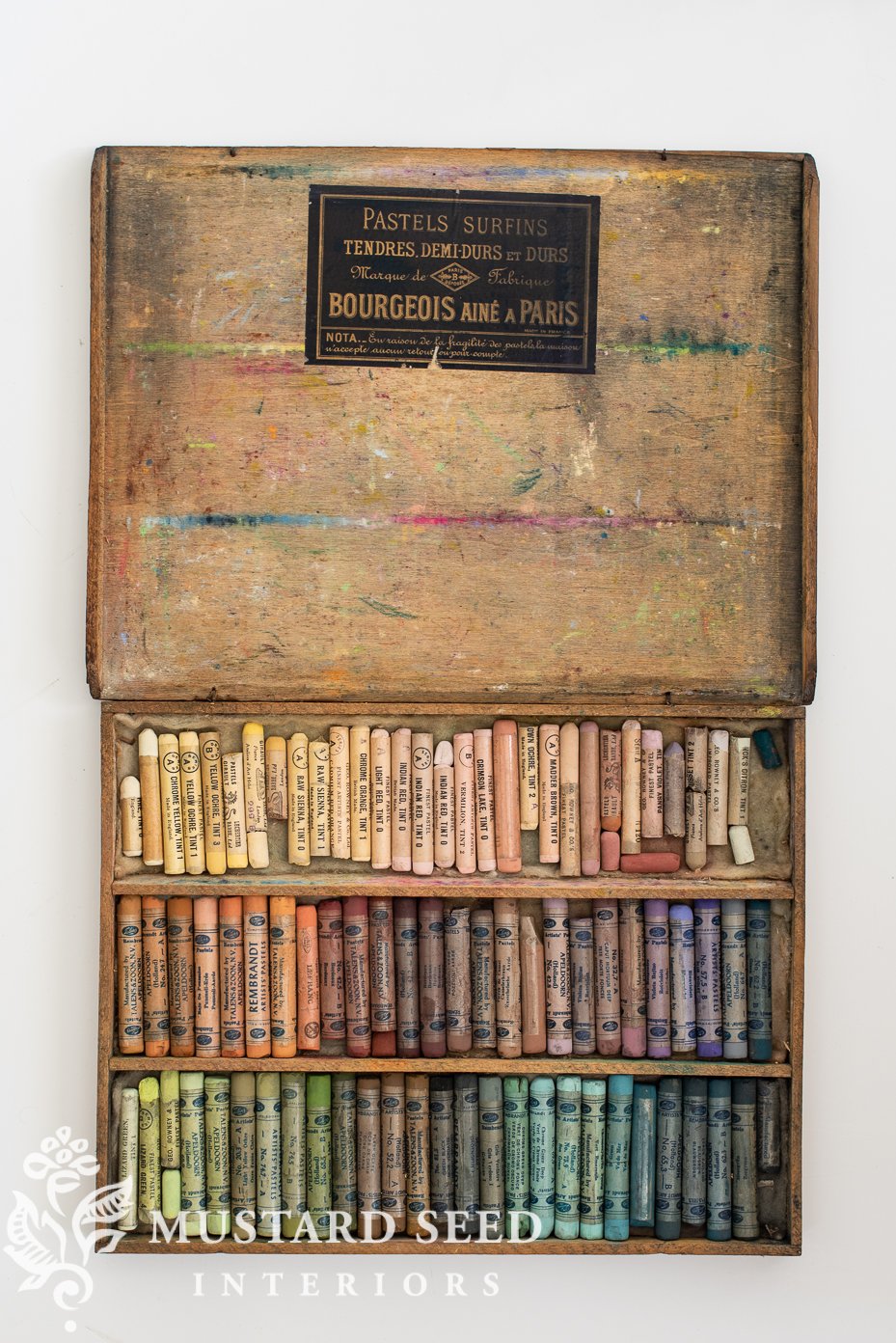 The funny thing is that I really struggle with pastels!  They are probably my least favorite medium.  But, I’m coming around and adding a little bit to my mixed media paintings and I might branch out and try pastel painting again.  I just love mixing colors so much that it’s a challenge for me to work with such a wide range of options!  I seem to do better with a limited palette. 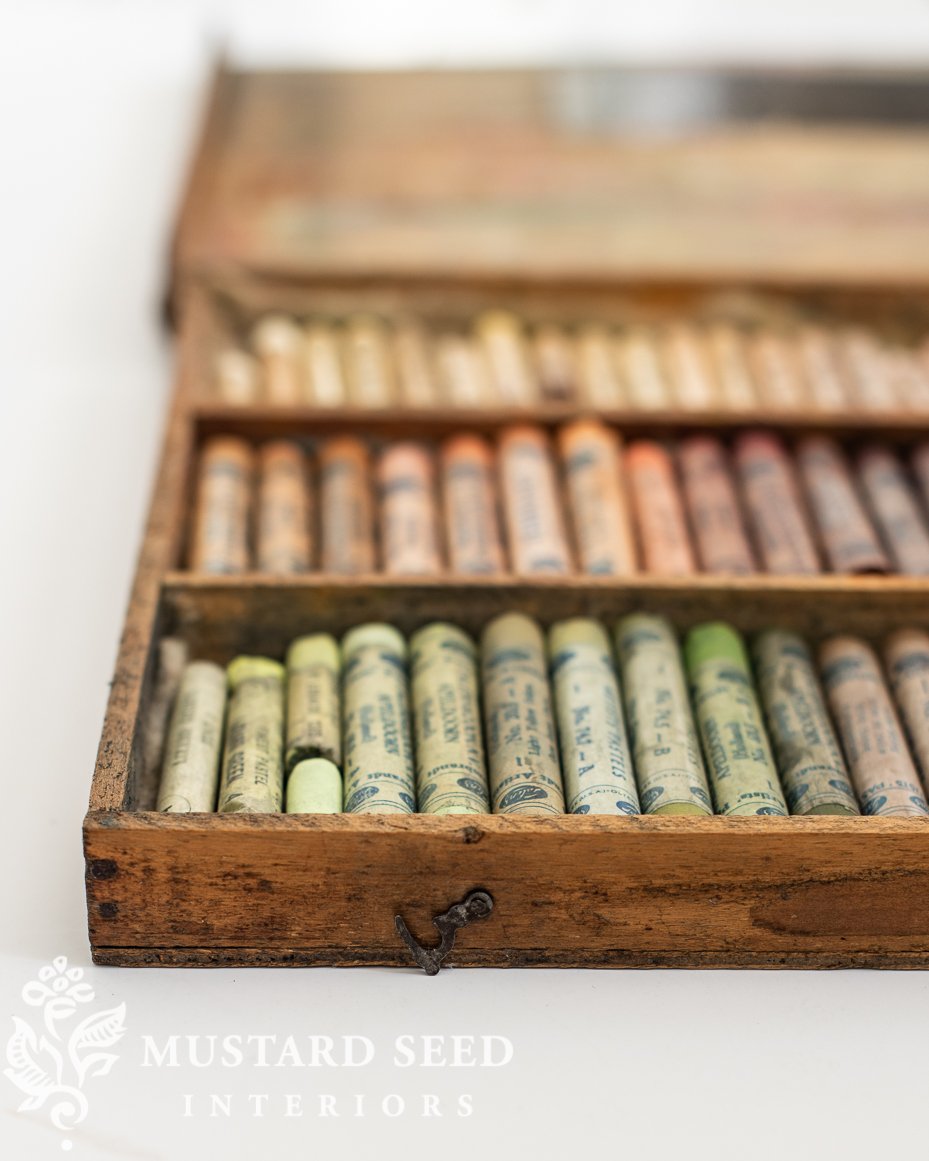 It was a lot of work to bring this box back to life, but completely worth it. 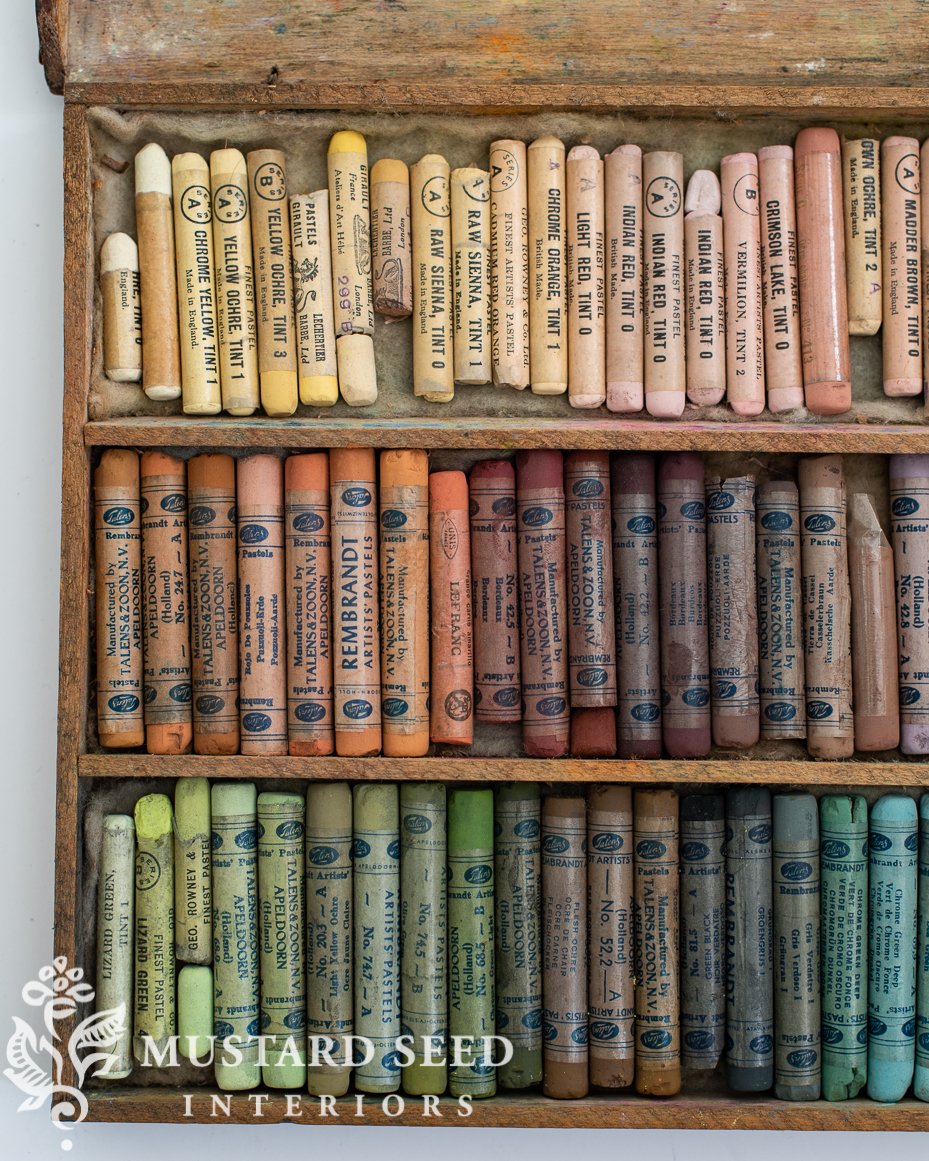 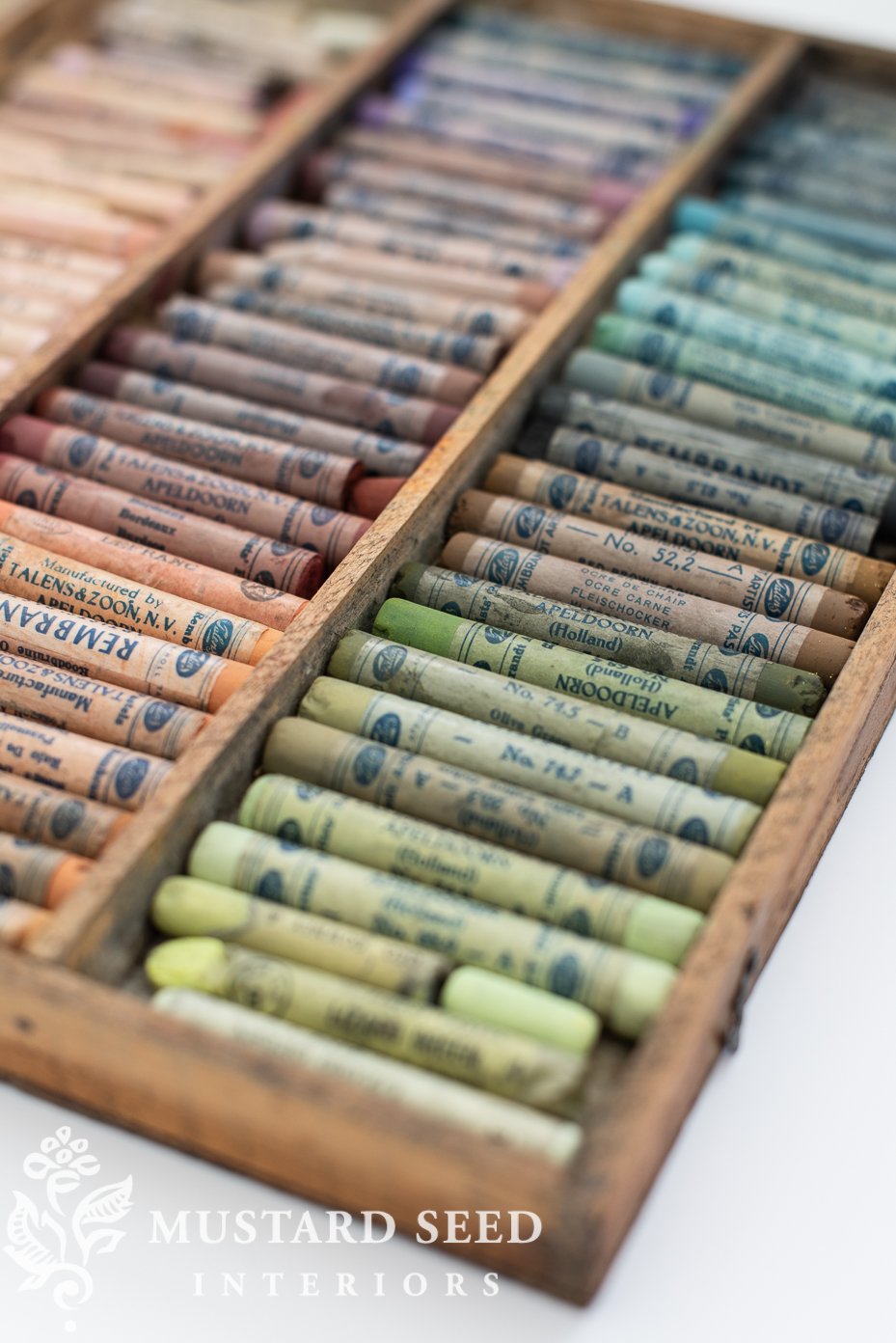 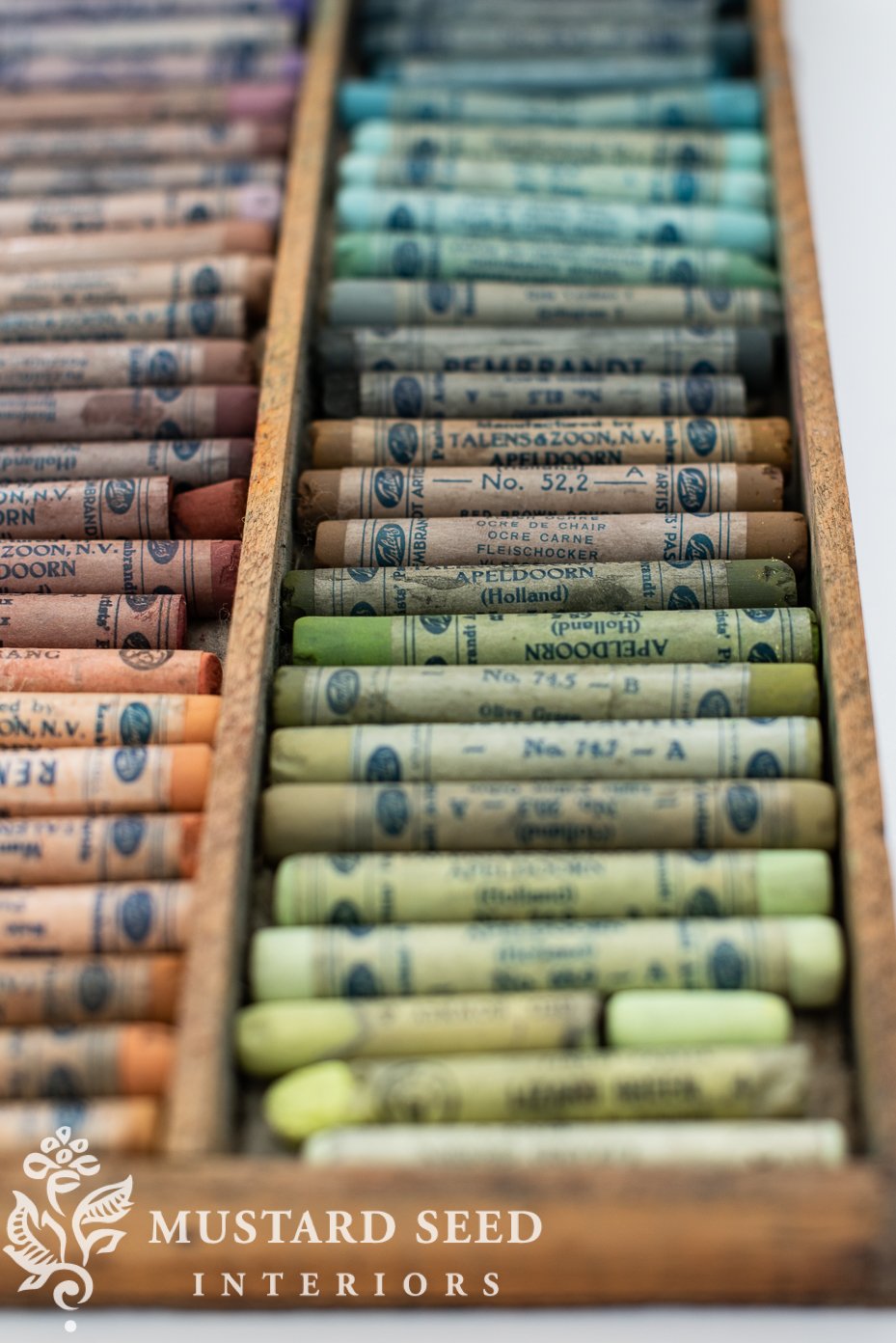 And, speaking of art, I wanted to let you know that my original art sale is happening this evening (Wednesday, Nov. 18) at 7:00 pm CST.

Visit THIS PAGE at that time and the paintings will go live at 7:00 pm on the nose.  You can also click the “SHOP ARTWORK” tab in the navigation bar.