As I was planning out our France leg of the trip, the number one thing I wanted to do was take a day trip to Champagne.  For me, it wasn’t about the grapes or the tastings, but it was about seeing the French countryside…seeing tiny villages nestled in lush green hills and checkerboard fields.

So, I booked a private tour for our group with Artventures.  If you’re planning a similar trip, private tours are more expensive than group tours, but they offer a lot more flexibility.  Since both John and I wanted to be able to stop and take lots of pictures, this was going to be the best option.  Also, when you split the tour between four people, the price is more reasonable.

(As an aside, this is a tour we paid for and this post is not sponsored.)

We were picked up at our apartment early in the morning by Celine, a petite woman with a neat blonde ponytail, big blue eyes, and a pouty lower lip.  She had a youthful, fresh-faced appearance that led me to assume she was in her mid-20’s.  She eased gently into small talk as we tuned our ears to her accent.

We weren’t 10 minutes away from our apartment when there was a problem with our van.  “Oh no.  Our tire is flat.”  She quickly got on the phone and arranged to exchange vans with a guide who was staying in Paris and would be able to better deal with the deflated tire.  It became clear, through her quick and collected response and the way she directed her coworker that she was older and more experienced than I originally thought.  That was later confirmed when she talked about her life and how long she has been working as a guide.

With the van trouble solved, we made our way out of Paris to the Champagne region.  As we were driving through the city, Celine pointed to buildings of note and answered questions we raised.

There was one specific building that I asked about.  It was the building where the French Academicians met.  She told us that members are voted into the position and serve for life.  They meet once a month, wear a uniform, and carry a sword as a symbol of their duty to defend the French language and culture.  There are supposed to be 130 Academicians, but five seats are currently vacant.   Four of them will be replaced, but one of the vacant seats is supposedly cursed.  Apparently, everyone who has accepted that seat dies within a year or so!  So, Celine expects it will remain vacant.

We left the city and drove two hours to the Champagne region.  City turned to suburbs, then to open fields with small collections of buildings, typically surrounding a church steeple.  Flat land became rolling hills.  Celine chatted most of the way, sharing bits and pieces about Paris, life as a guide, and her childhood in Champagne, working with her family during the grape harvest.  Her grandfather worked for Dom Perignon, so her Champagne roots run deep.

The more she chatted, the more she revealed her wicked and delightful sense of humor.  When John asked a question about Burgundy, her face puckered and she declared, “We hate Burgundy!”  You could practically hear her spitting under her words and she broke into stories about having to take tours to Burgundy and the negative reaction she sometimes drew due to her Champagne accent.  She added the final comment, “There is such a thing as cheap wine.  There is no such thing as cheap Champagne.”

The day was gray, overcast, and threatened to spit rain on us all day, but as we arrived into the Champagne region, the blue sky showed itself and white puffy clouds appeared.  It was just the weather I was hoping for in order to take lots of reference photos for paintings.

And, the region was beautiful.  It was everything I hoped it would be. 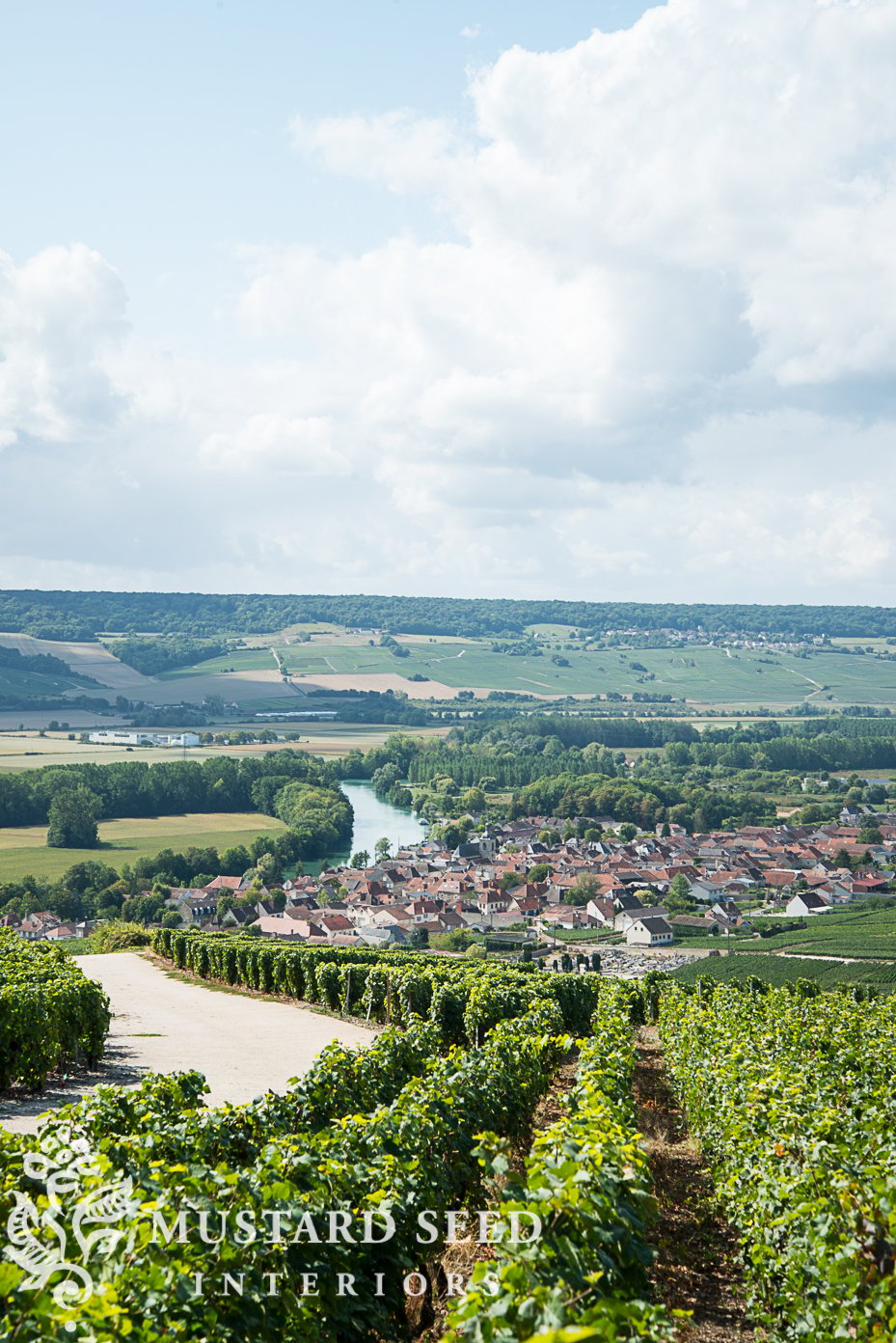 The day was crisp and sunny.  Anytime Celine pulled the van over for us to get out, I would breathe it all in, willing time would slow for just a little while. 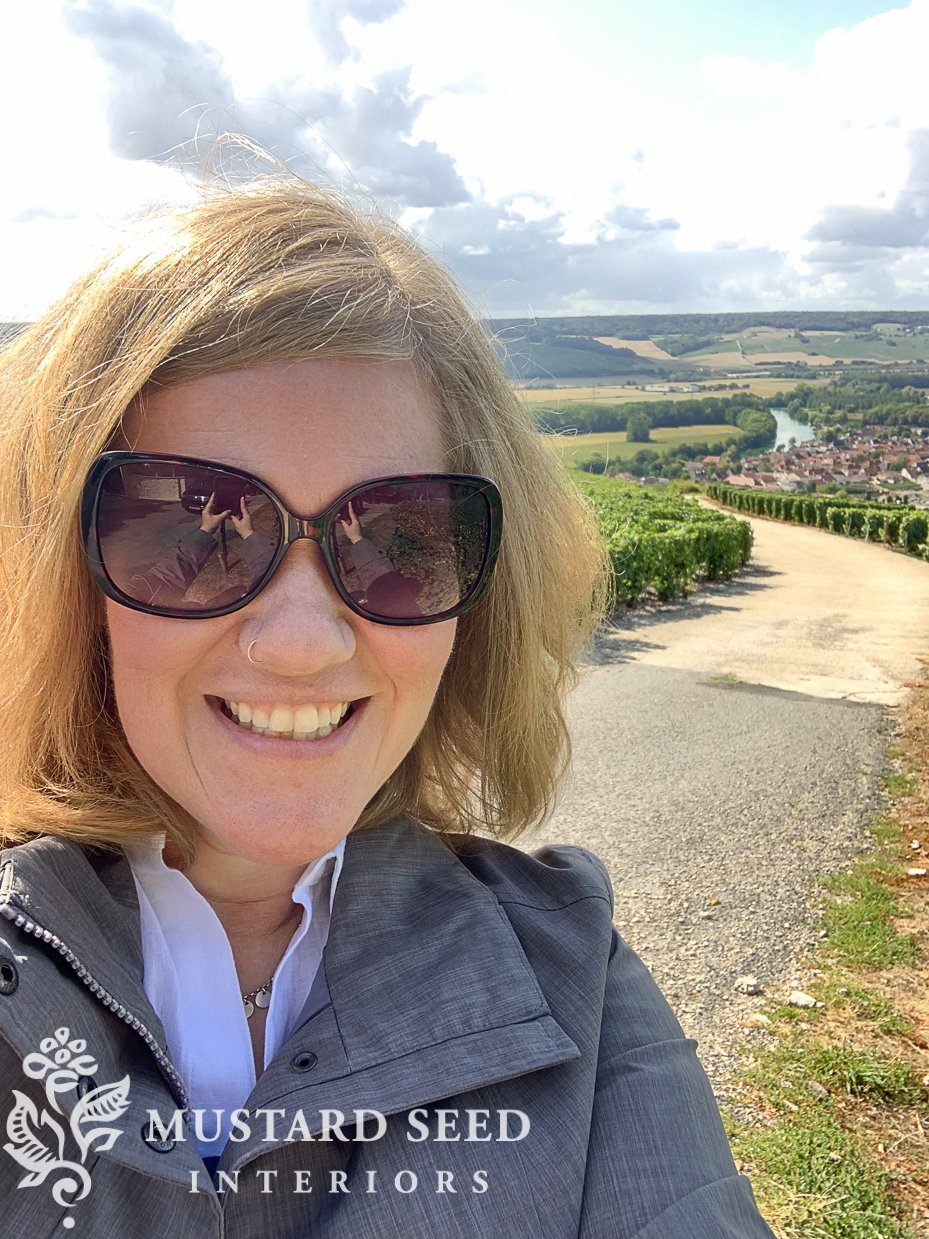 We had arrived the day before the majority of the grapes would be picked.  Apparently, the entire region picks grapes within an 11-day period and they coordinate who picks when, so there will be enough pickers for all of the growers. 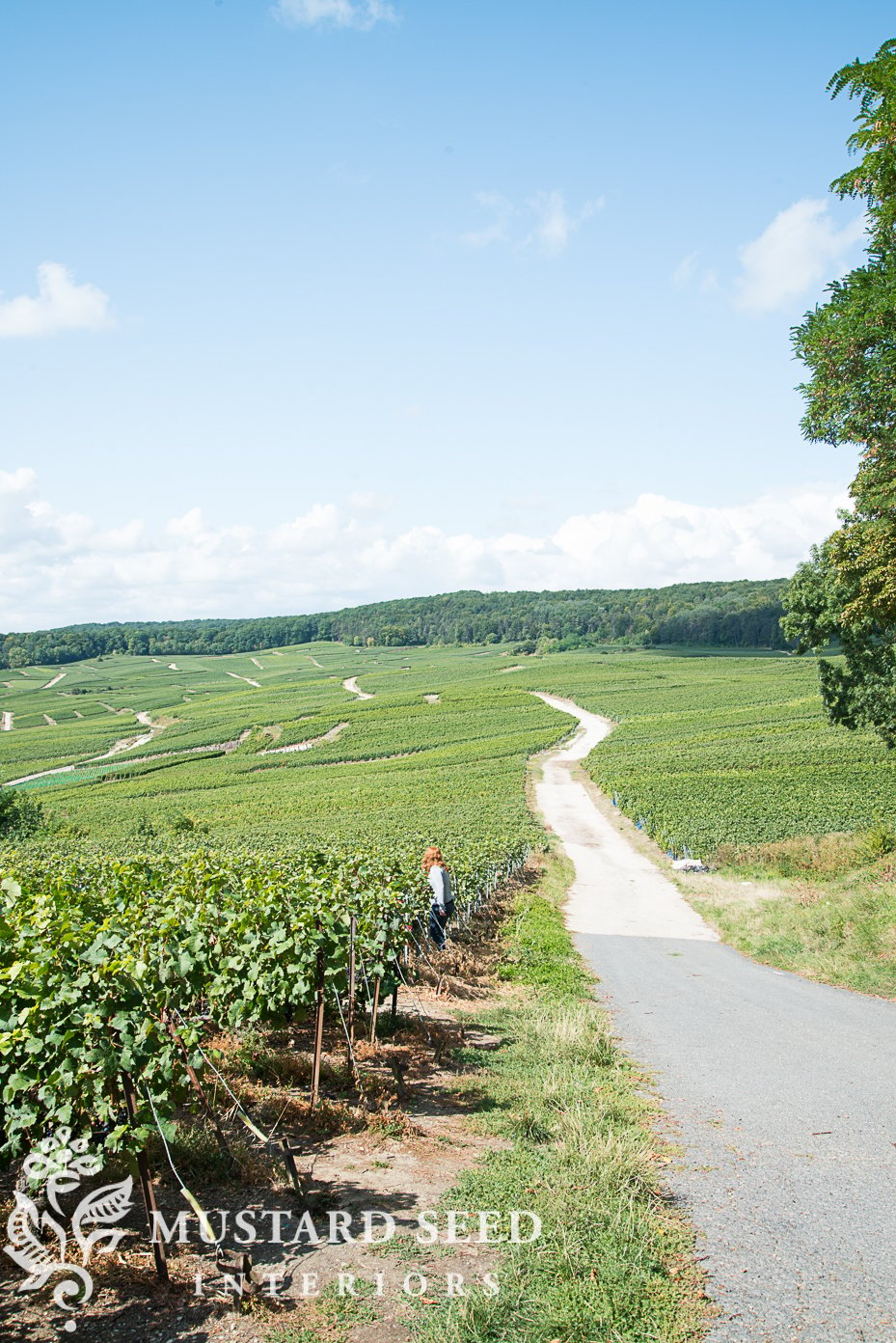 Celine was an amazing guide.  She told us all about the business and personal side of being in a “grape family.” 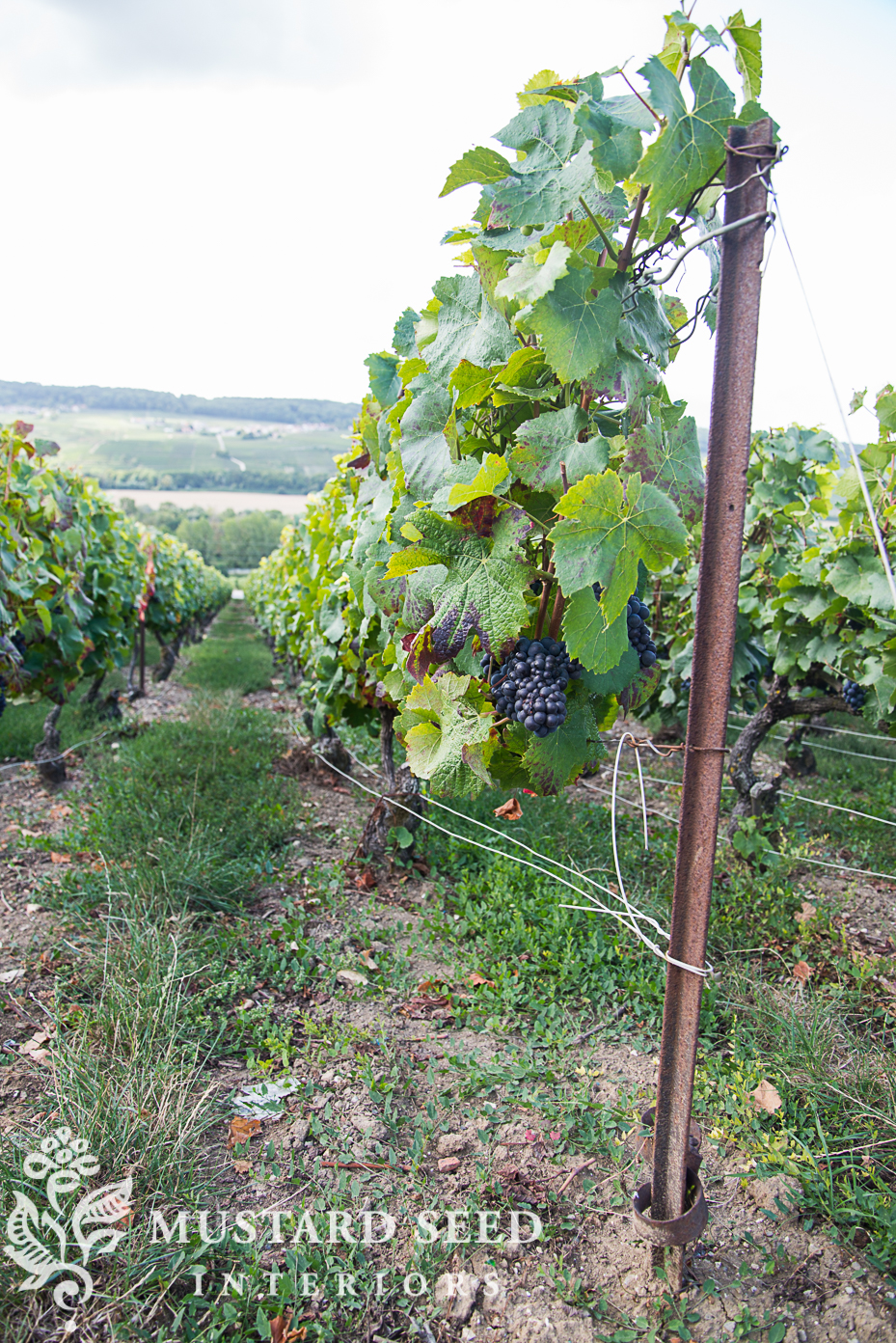 Our first official stop was to tour the family-run Champagne house of J. Charpentier.  The J. stands for Jackie.  He was born shortly after WWII and was given an American name.  He joked that the name Jackie wasn’t well-suited for a Champagne label or marketing. 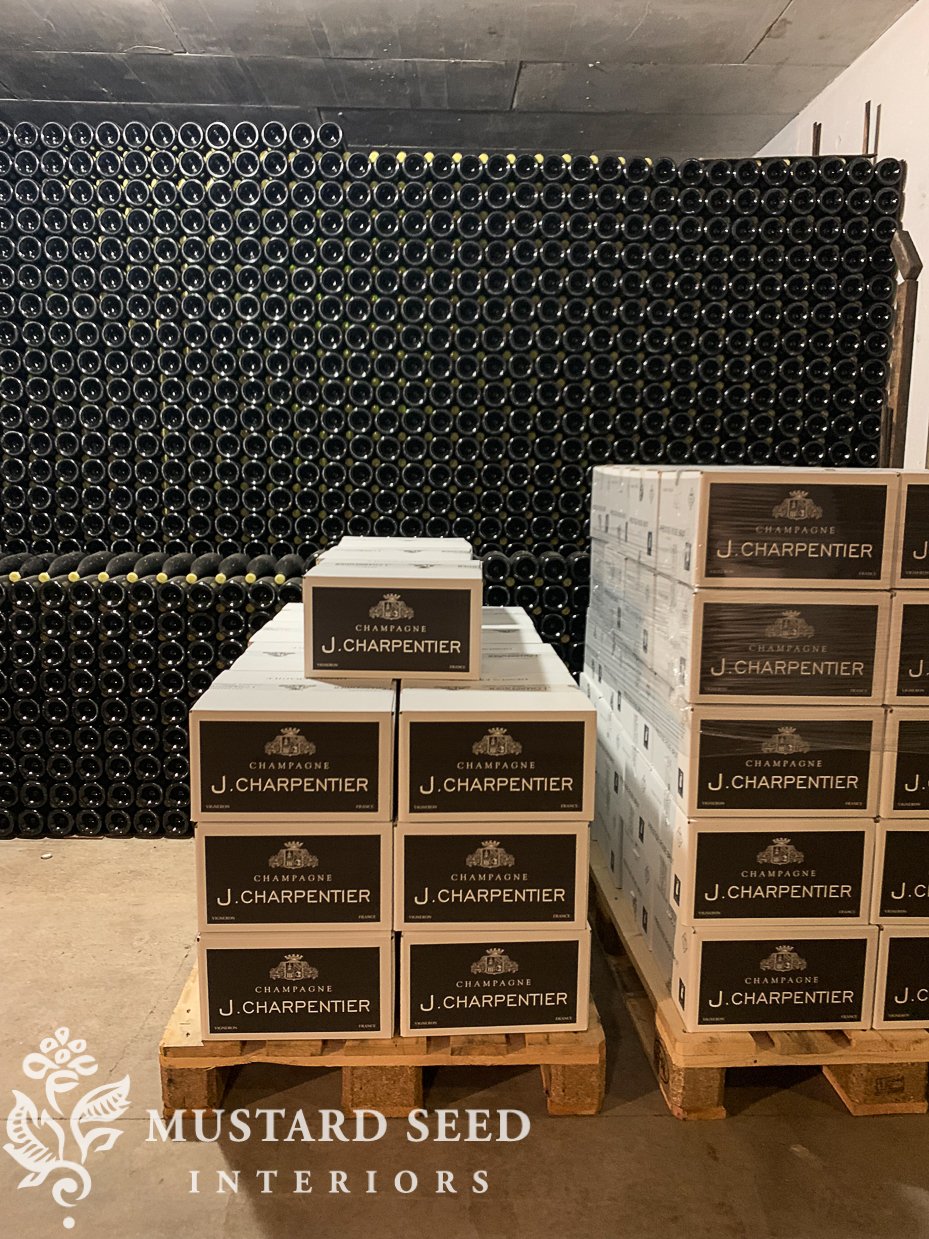 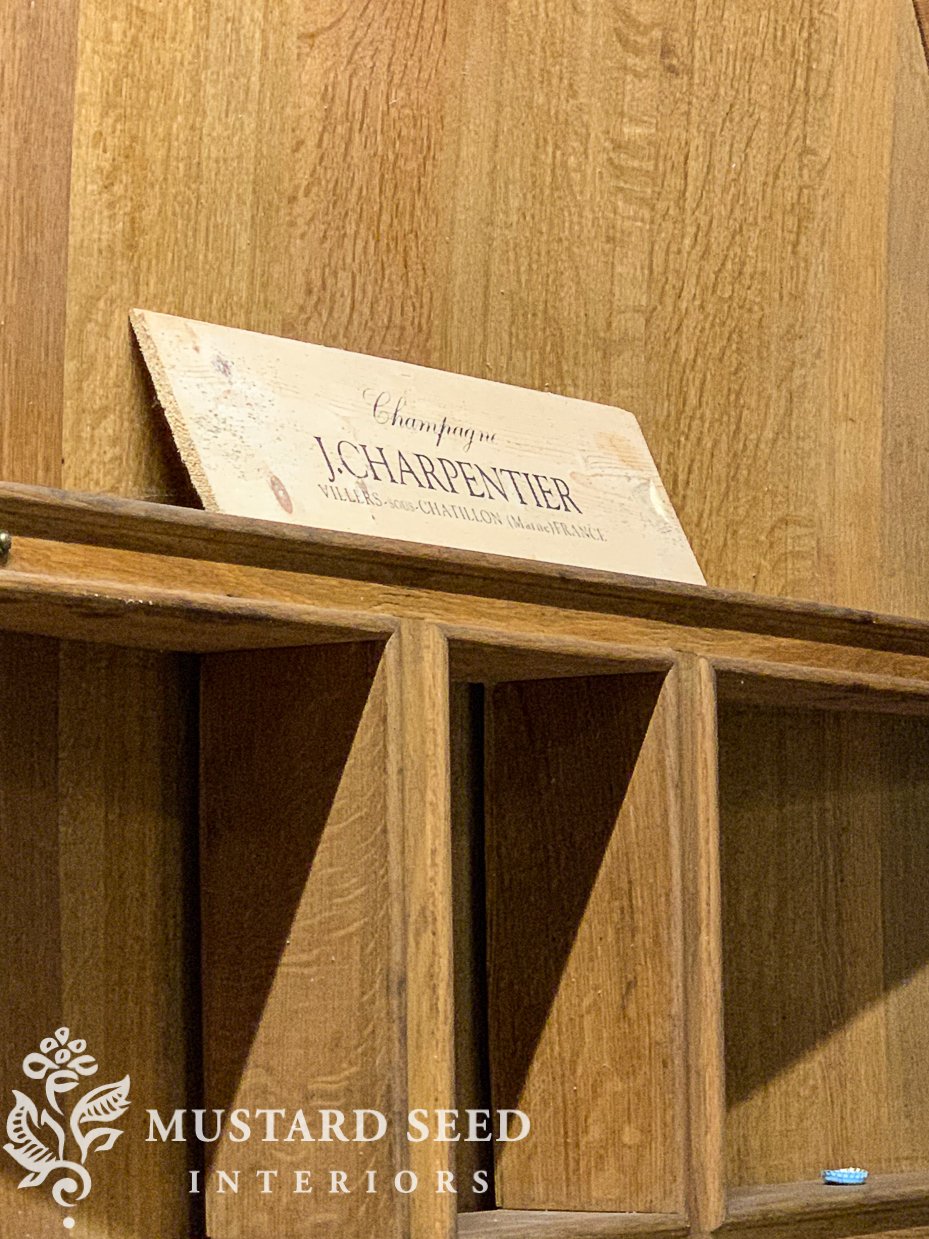 As the owner of the Champagne house, it was surprising that Jackie himself gave us the tour of his cellars.  He didn’t speak English, so Celine translated for us.  Jackie shared the entire Champagne-making process, showing us bottles, barrels, and machinery at each stage.  He was proud of his work, but wasn’t pretentious.  I felt warmly invited into his world. 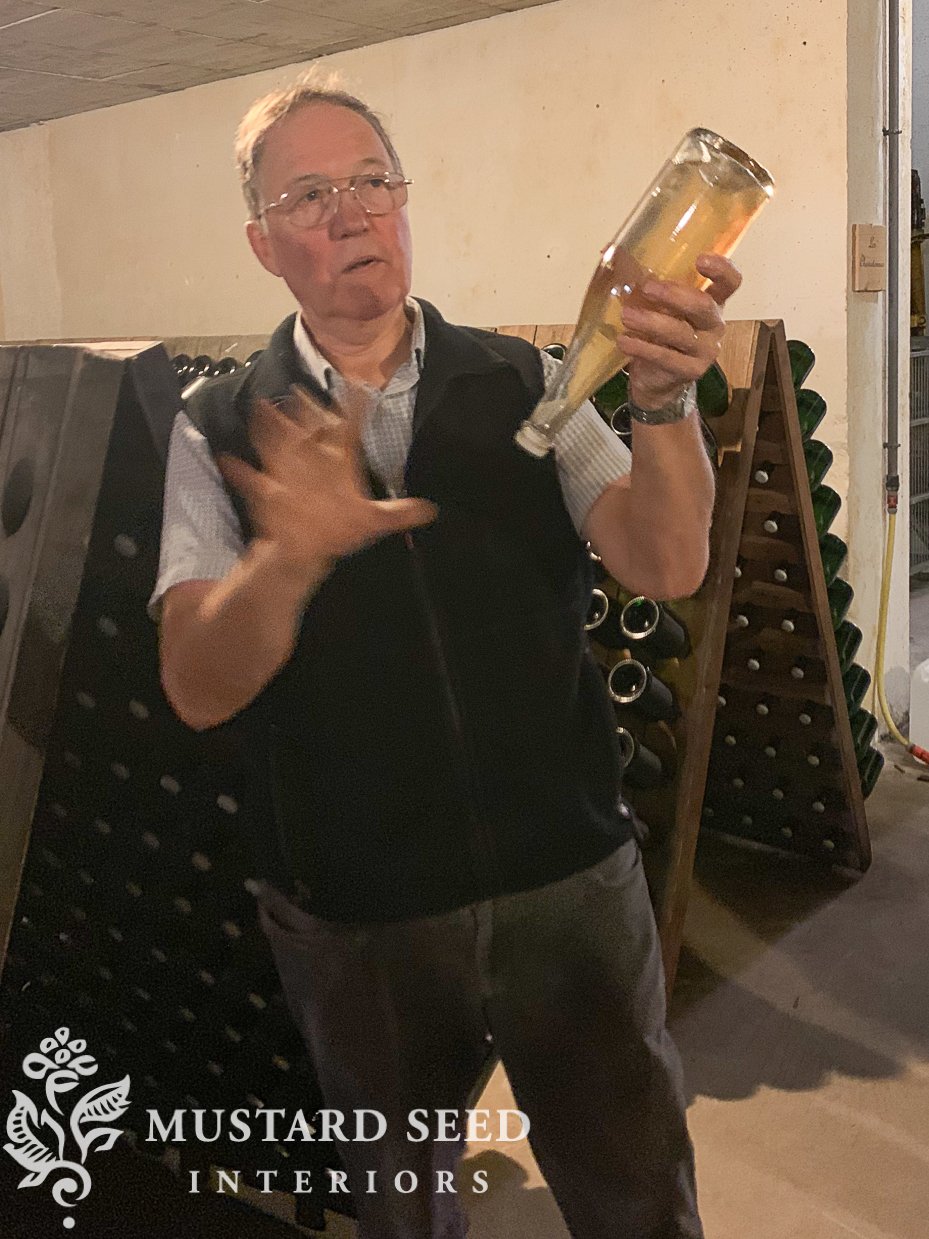 For those who like Champagne, one thing to look for one a label are the letters RM.  RM means that the entire process is under one house from growing the grapes to shipping out the finished bottles.  Many larger Champagne houses buy grapes from many growers.  Not being a Champagne or wine officiant, I can’t speak to whether one is superior to another, but if you want to support a family-run Champagne house, look for the RM. 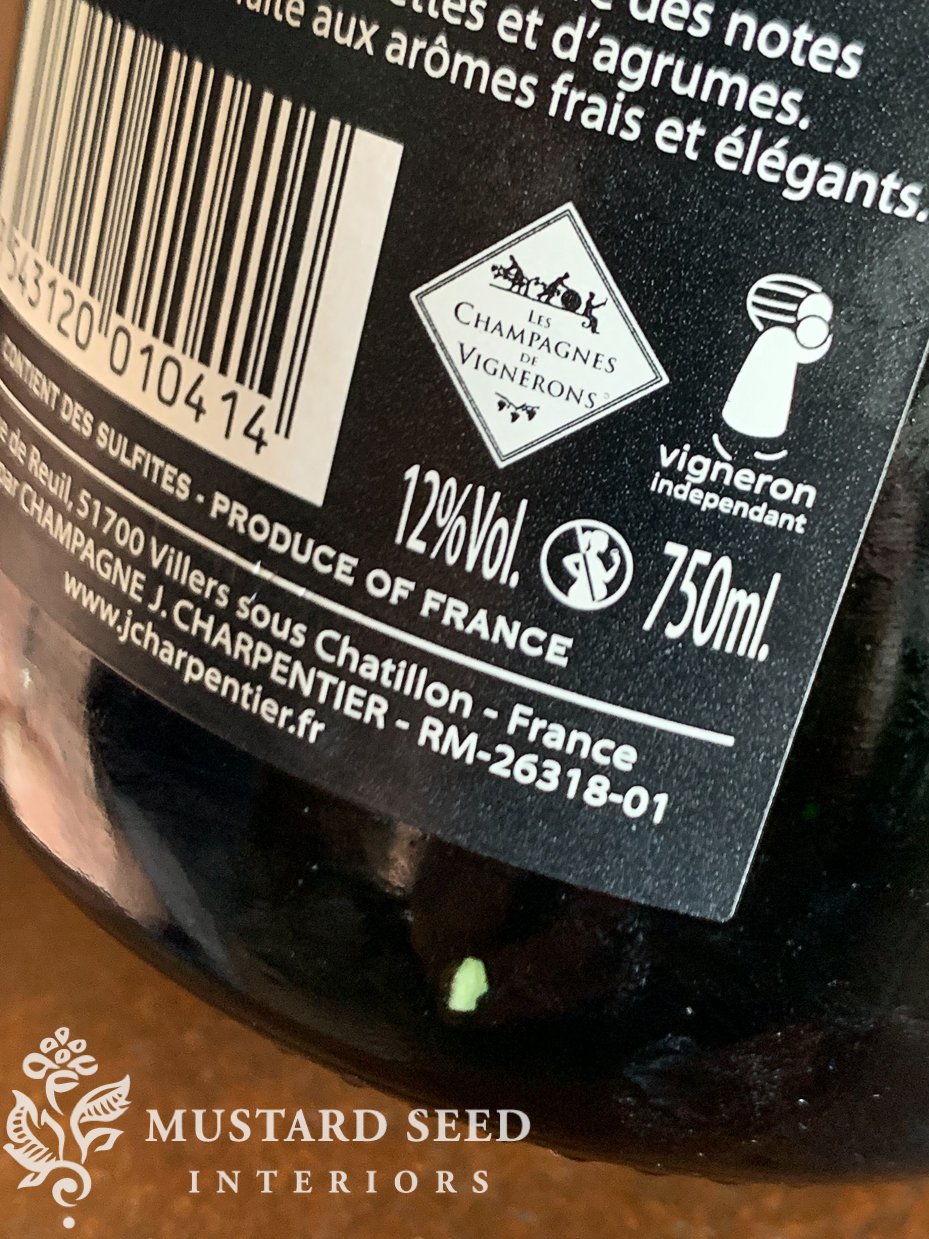 He stayed with us for the tasting, bringing out three different Champagnes and even joined in by pouring a glass for himself.  We asked if he still loves Champagne after working with it his whole life.  He smiled, nodded, drained his glass, and fetched another bottle. 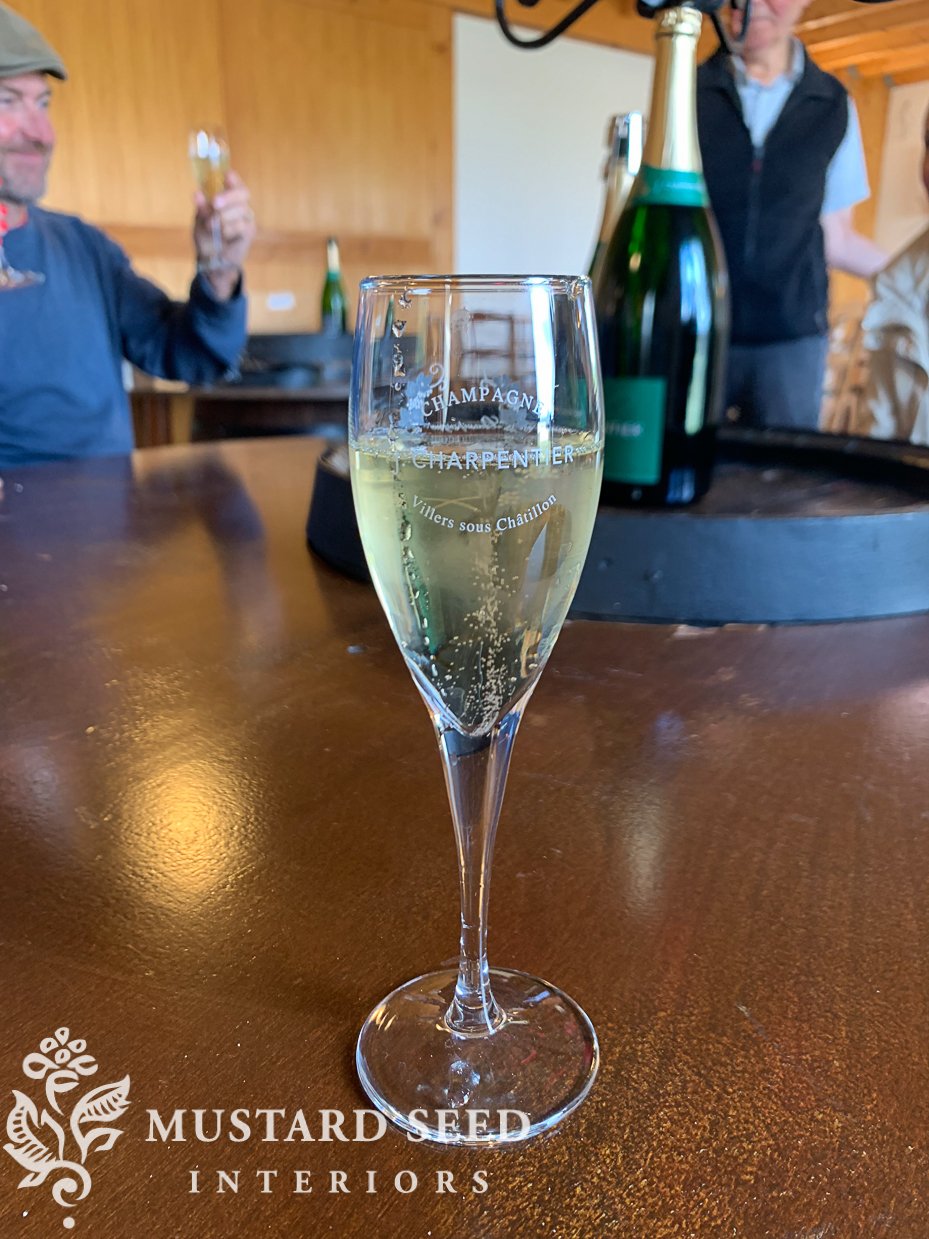 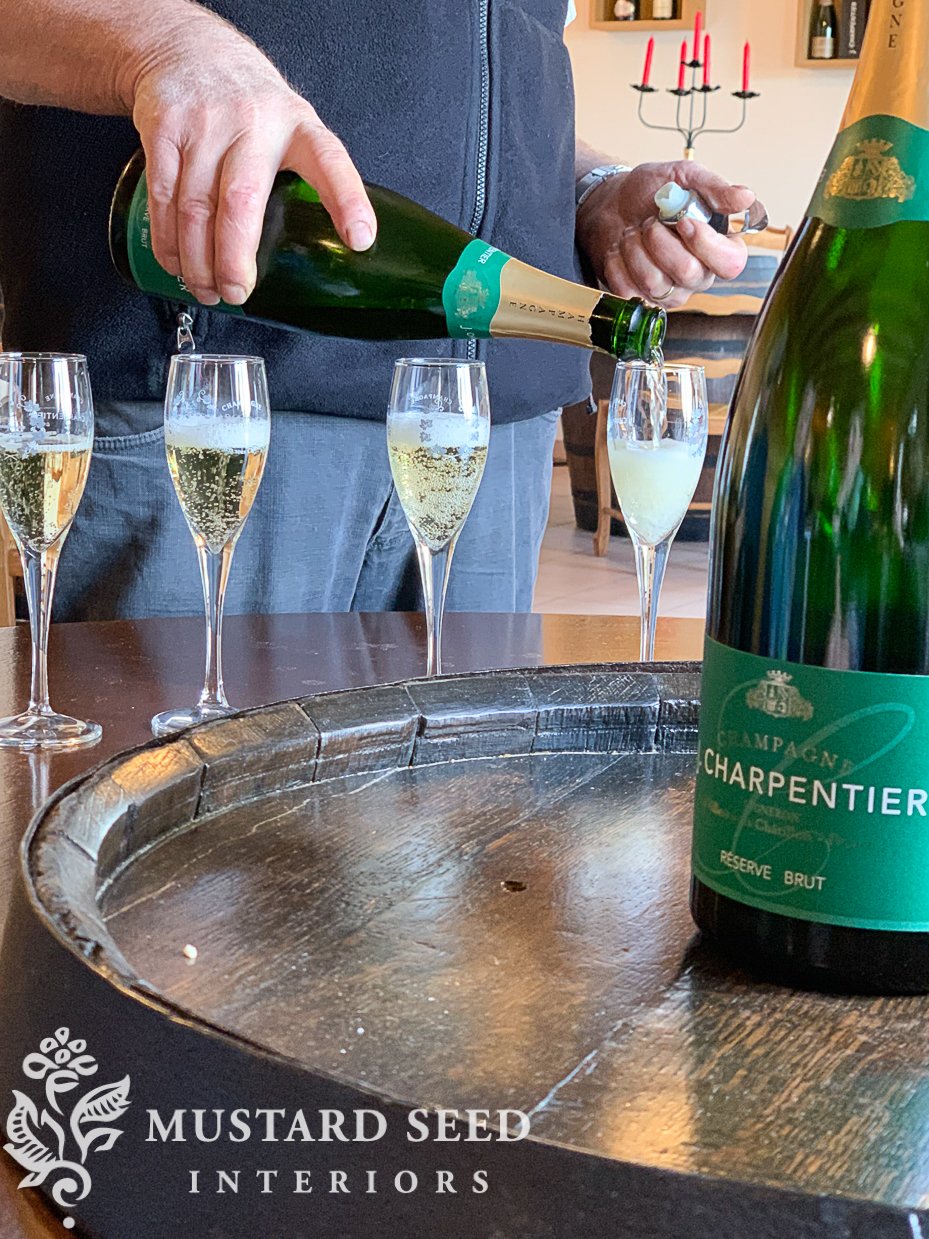 Celine noticed we were more taken with the scenery and villages, so she took us to the village of Epernay she grew up in for lunch.  She told us stories of tradition…lands being passed down through generations.  “When you marry someone from Champagne, you also marry their grapes.”  She talked about vinegar mothers or bread starters that are the same ones used by her grandparents and great-grandparents.

After lunch, she took us to a larger Champagne house were she worked as a guide for several years – Champagne de Castellane.  We were not permitted to take photos during that tour, except in the cellars.  The cellars from Epernay are an enormous network of interconnected tunnels that run under all of the Champagne houses.  These cellars were used as bunkers during WWII, housing a school, hospital, and more.  They go on for miles. 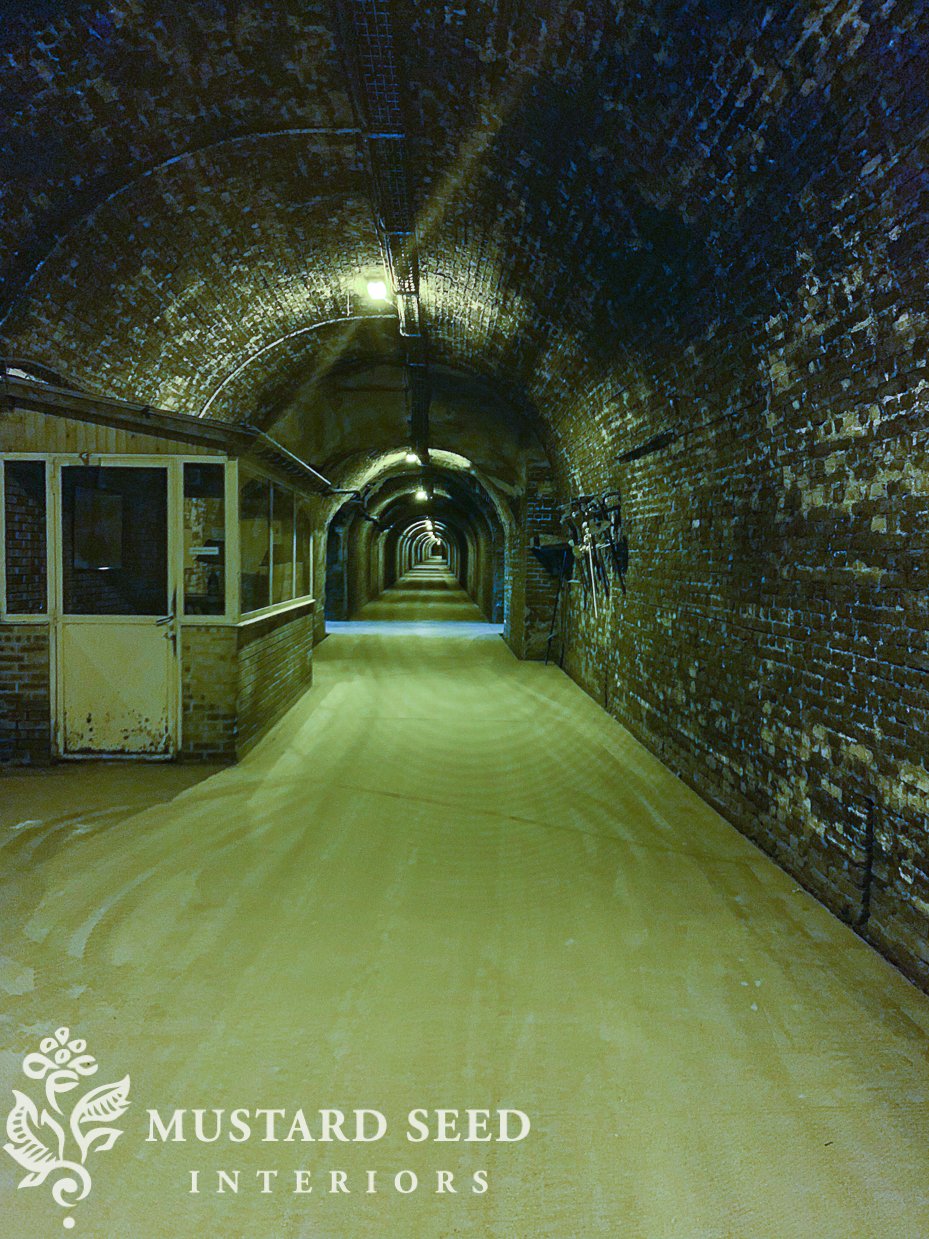 We had a tasting at the end of that tour as well. 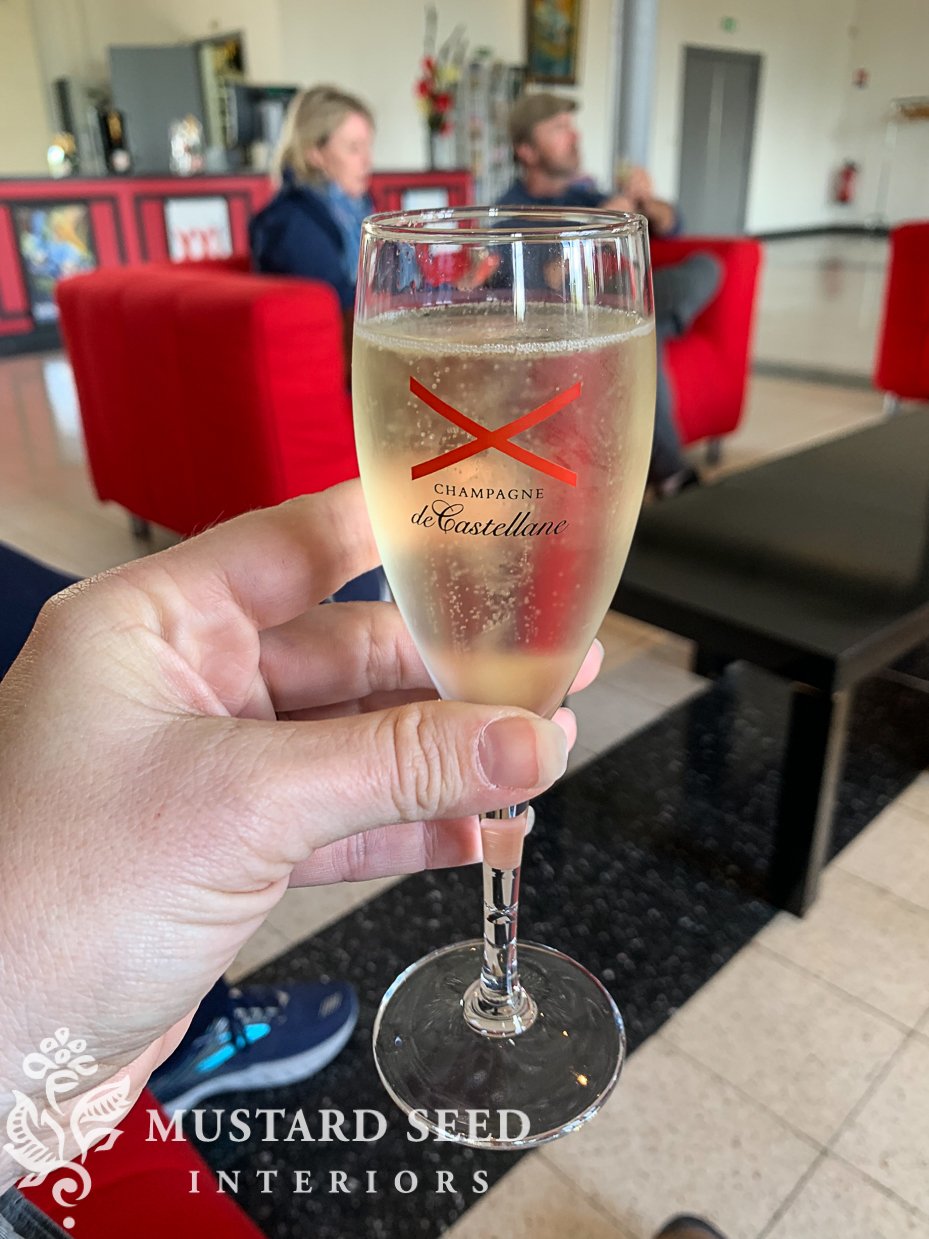 I’m not a big wine/Champagne drinker, but when you’re in a Champagne house in Champagne, you need to at least take a sip!  So I would try it and then typically pass my glass to my mom or John to finish off. 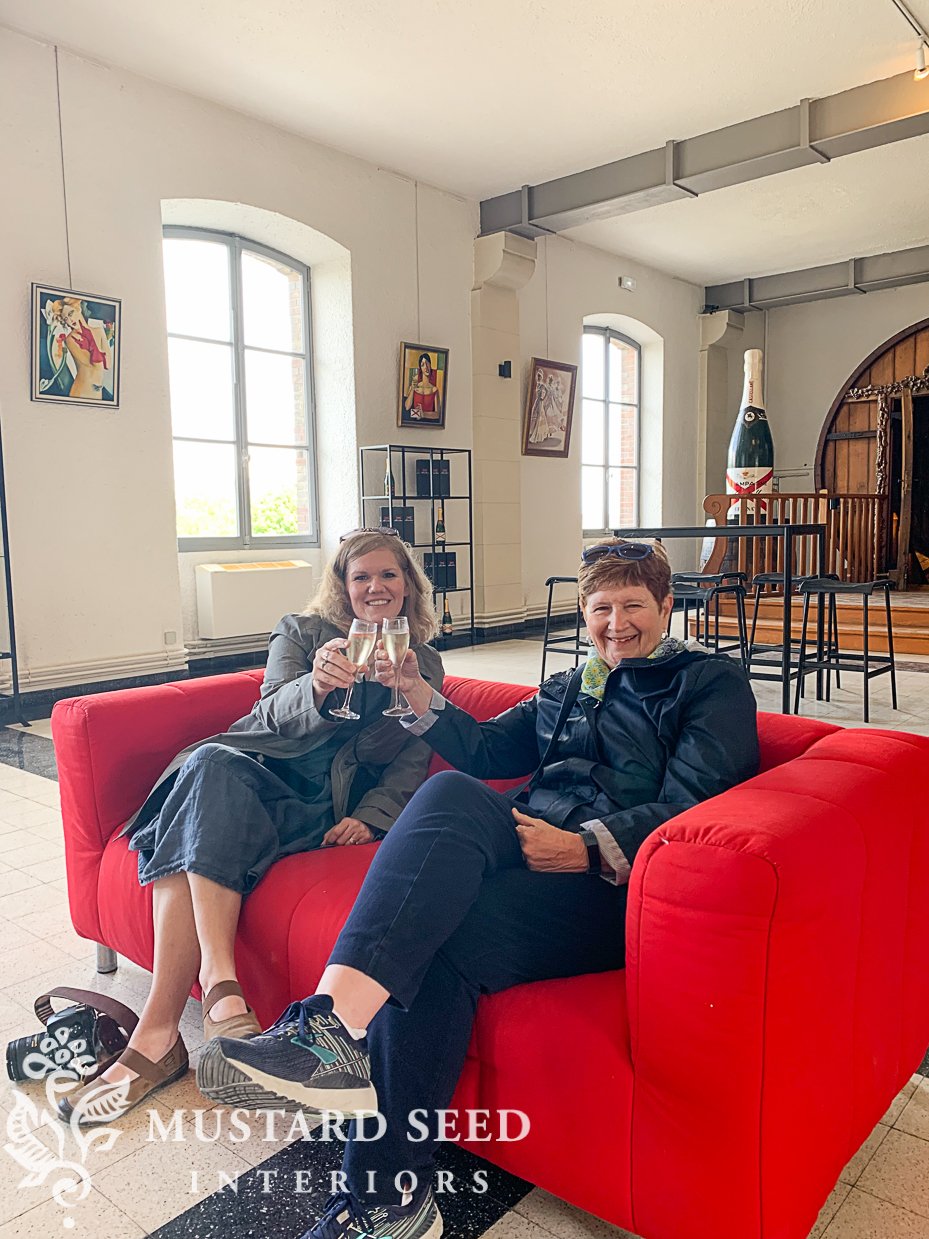 From Epernay, we drove to Reims to see the cathedral, Notre Dame’s sister. 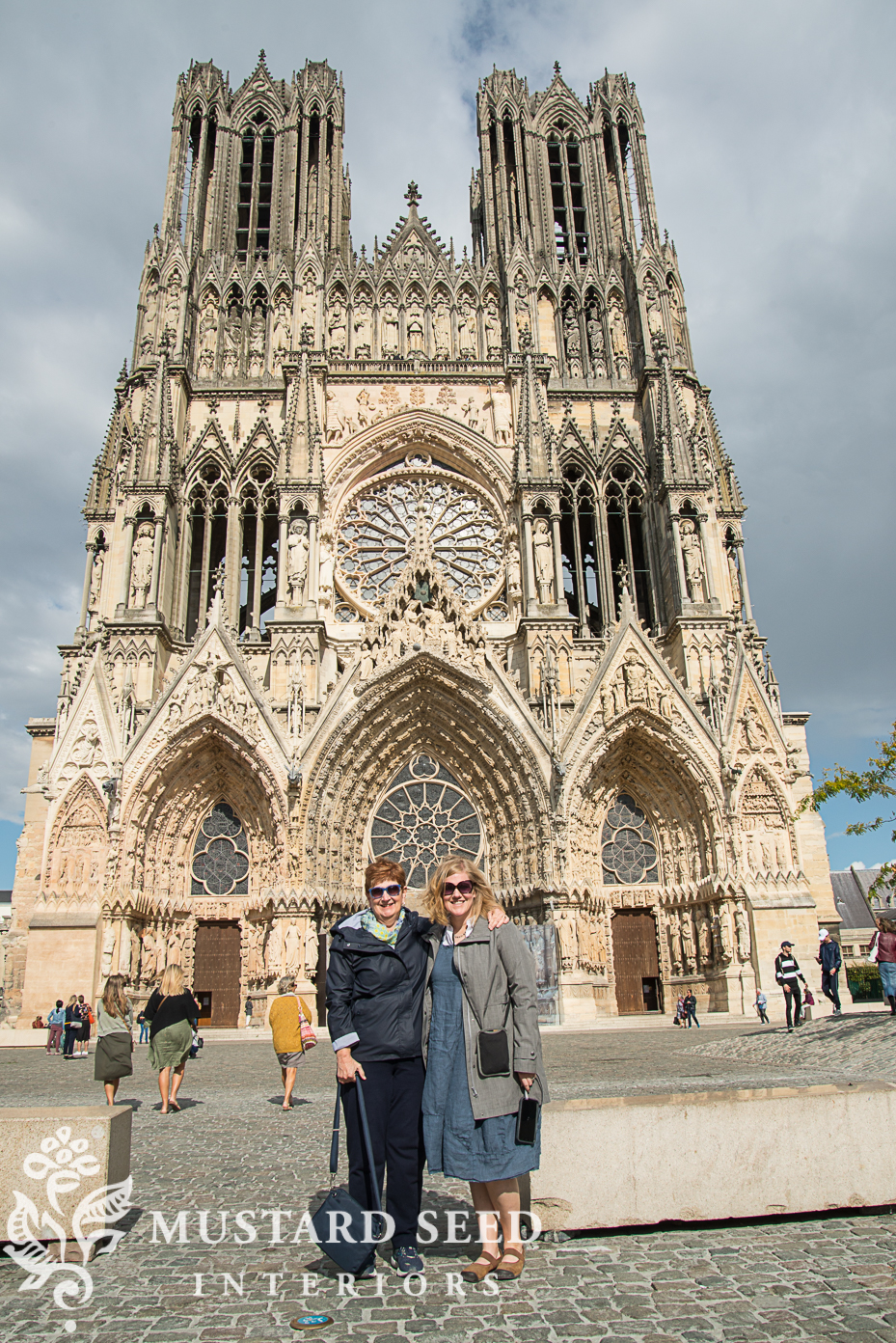 This is the cathedral where the French kings were crowned and it was absolutely breathtaking.  I saw Notre Dame last year, but it was at the end of a tour and a tiring day, so it didn’t impact me as much as seeing the cathedral in Reims.  I was literally in awe.  It was hard to take in the scale and detail of the building.  I stood for several minutes, camera put away, and just stared at it.

I admired the workmanship…the architecture, the engineering, the artistry. 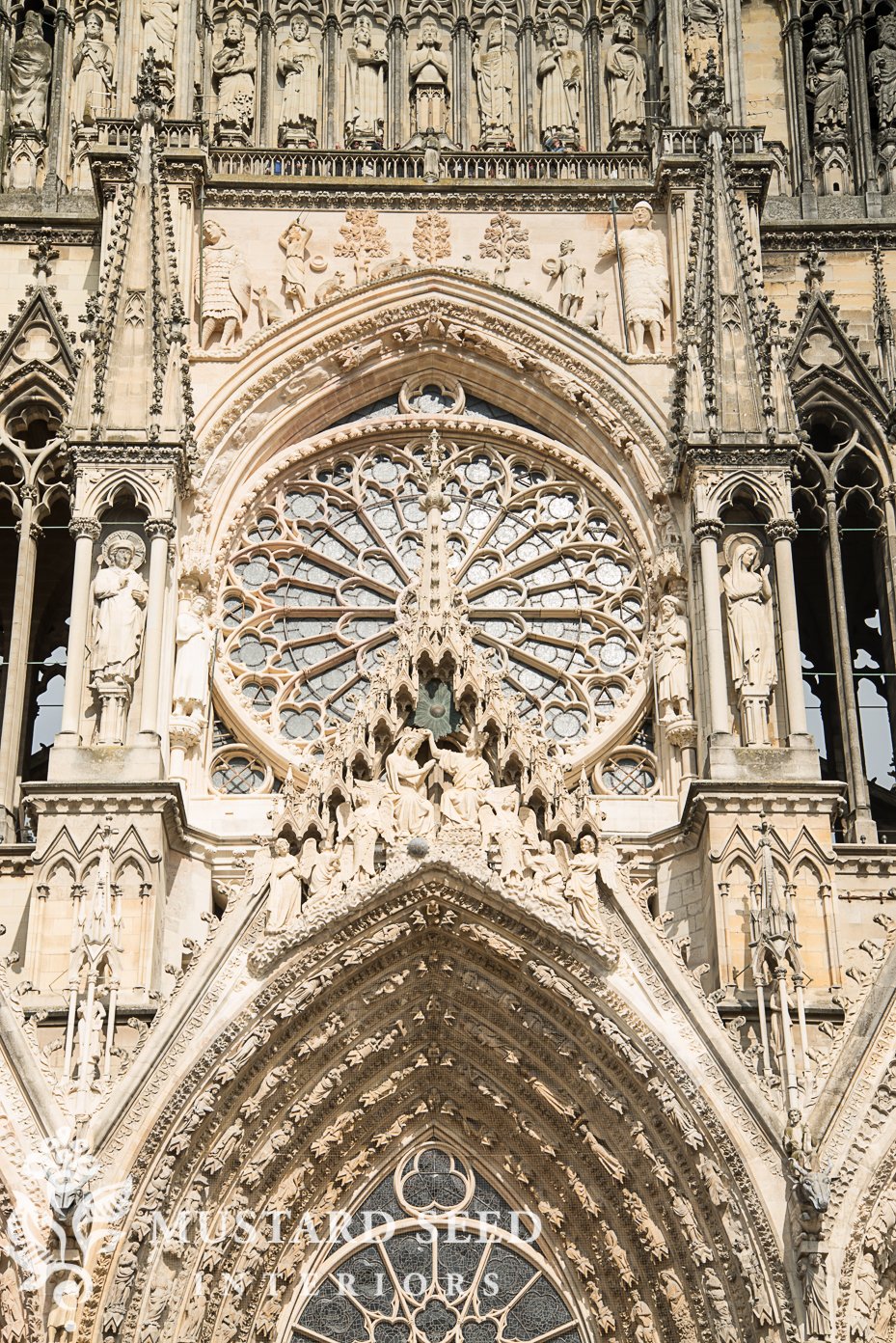 As amazing as the cathedral was outside, it was just as impressive inside.  The ceiling was impossibly tall.  It seemed to defy gravity. 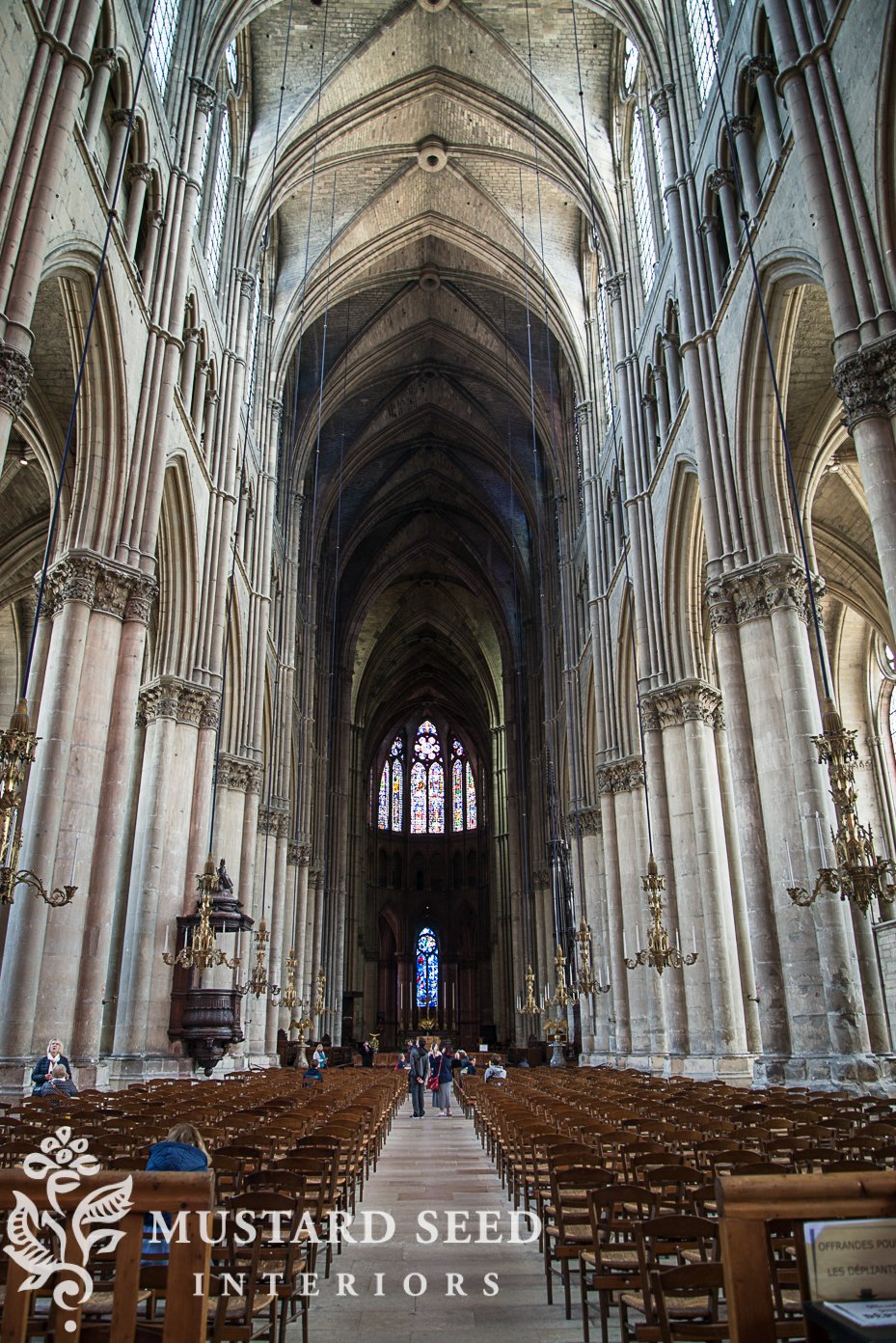 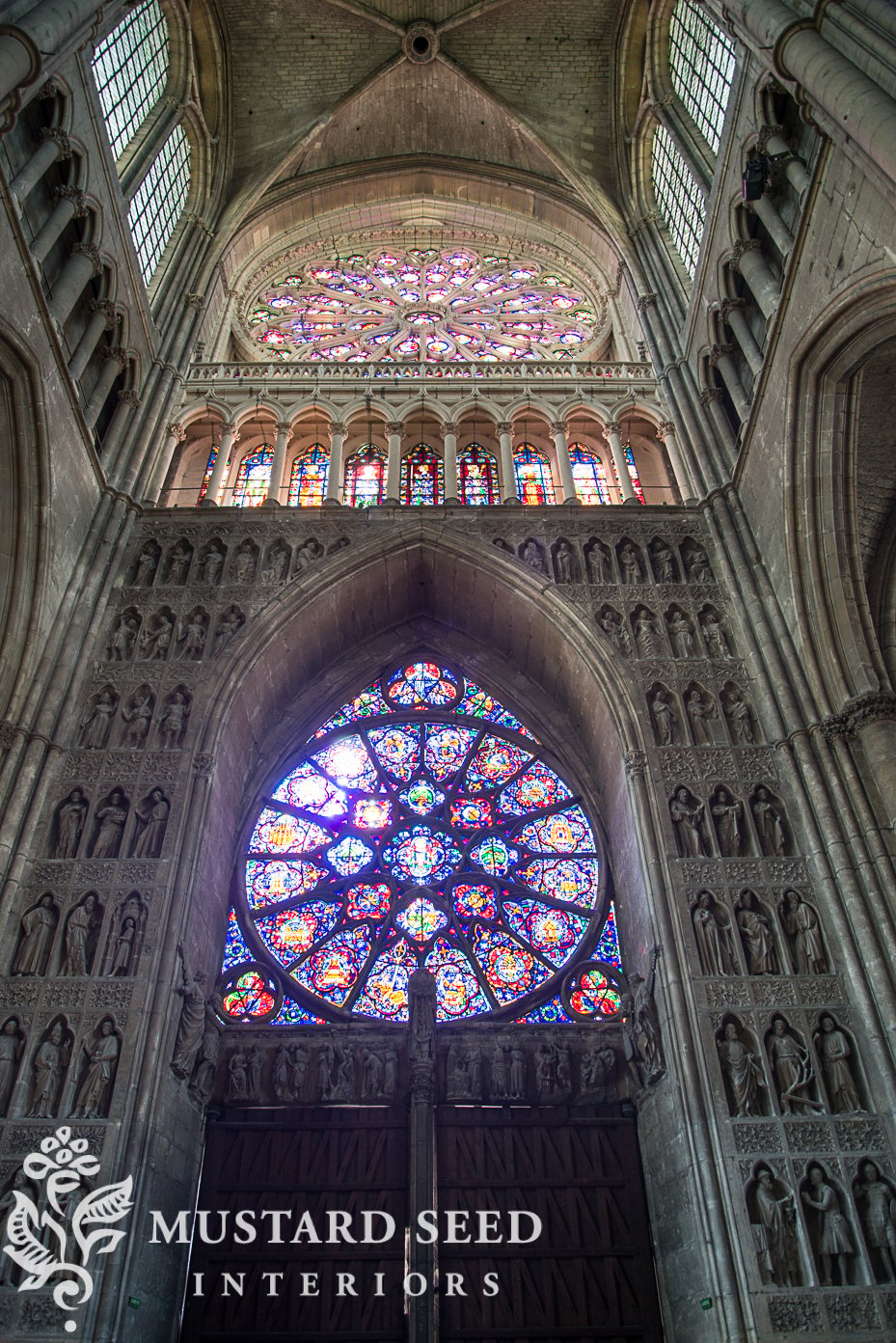 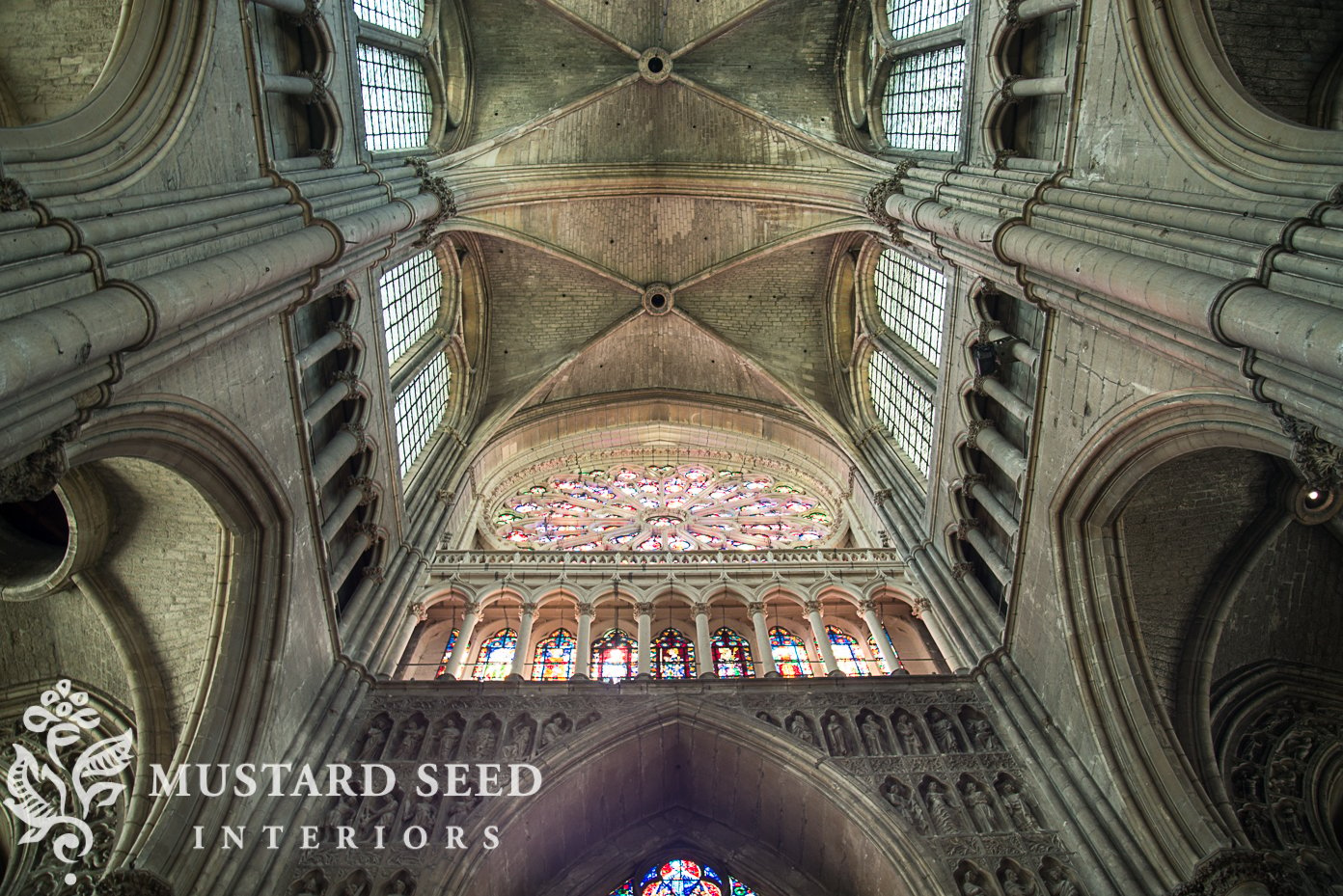 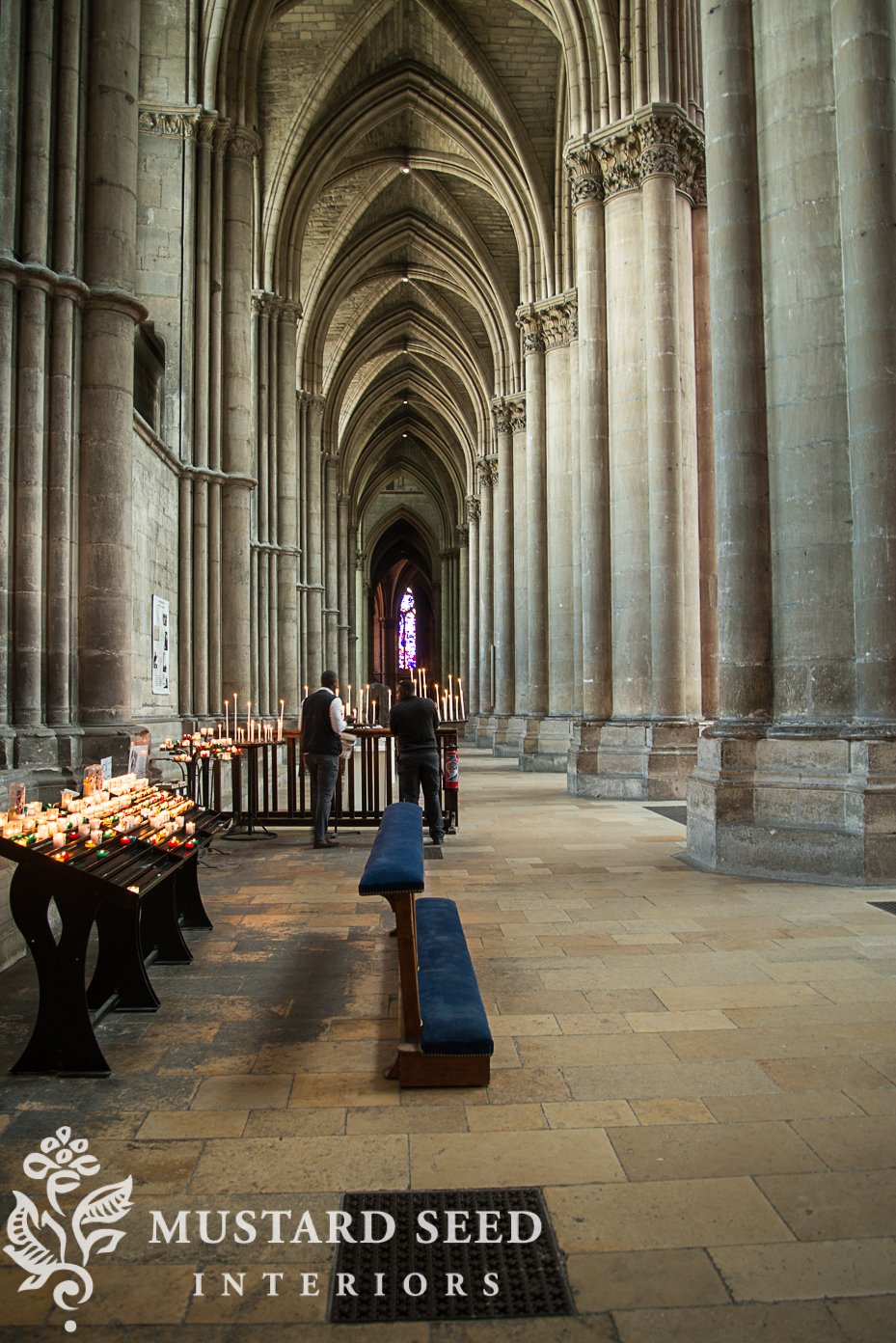 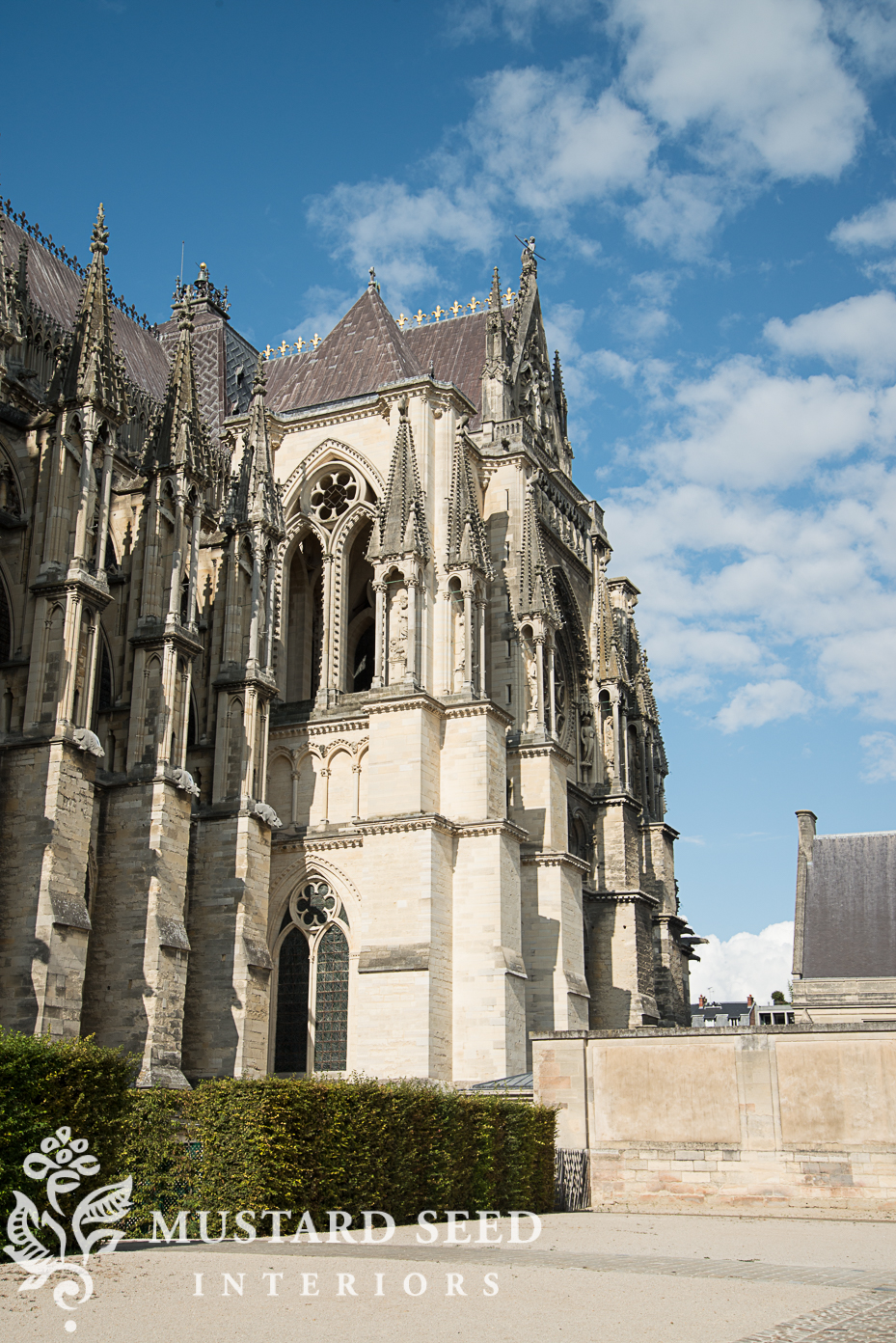 The town of Reims was charming and I was sad that we didn’t have enough time to explore the streets.  Our tour was already running late and we needed to get back to Paris. 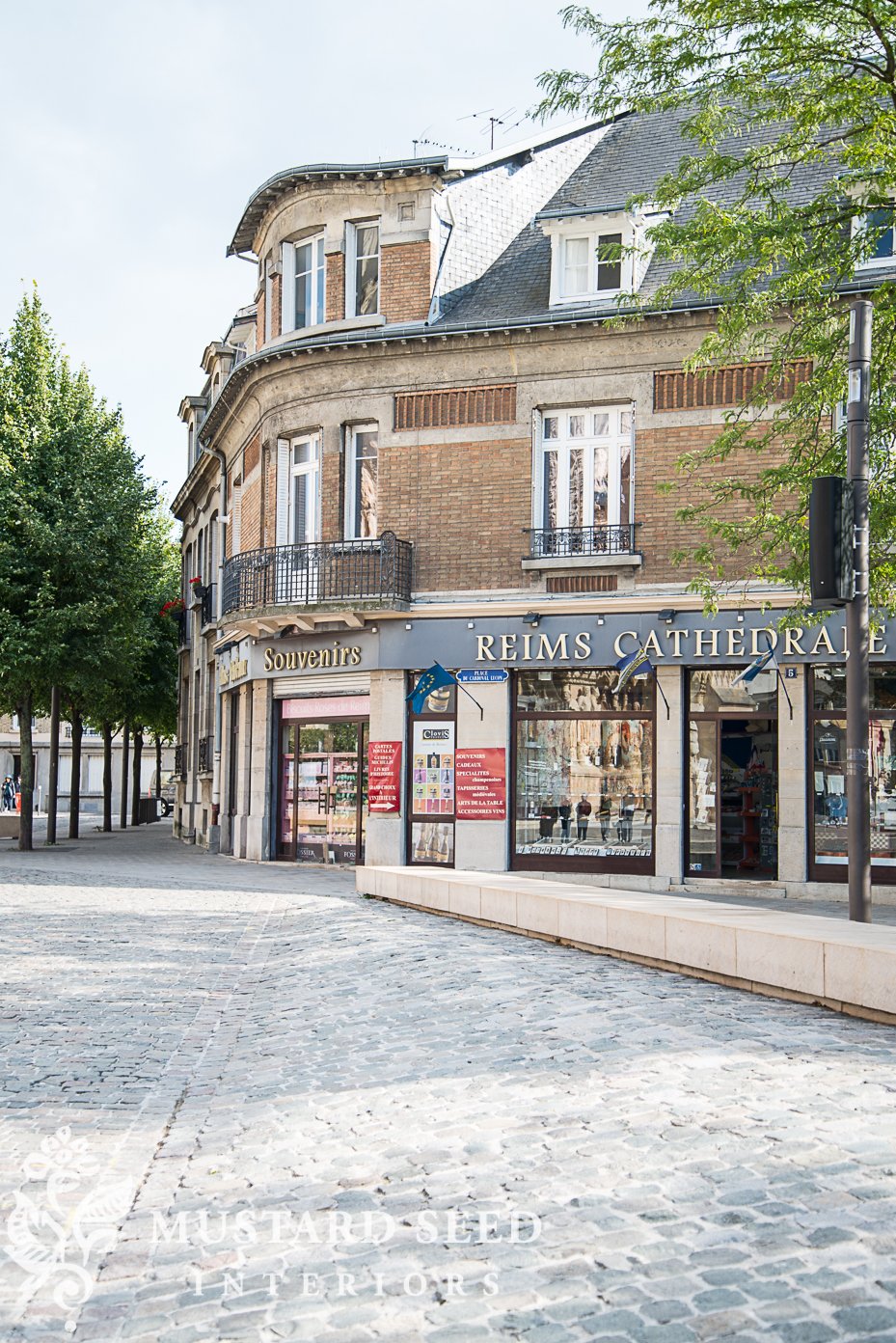 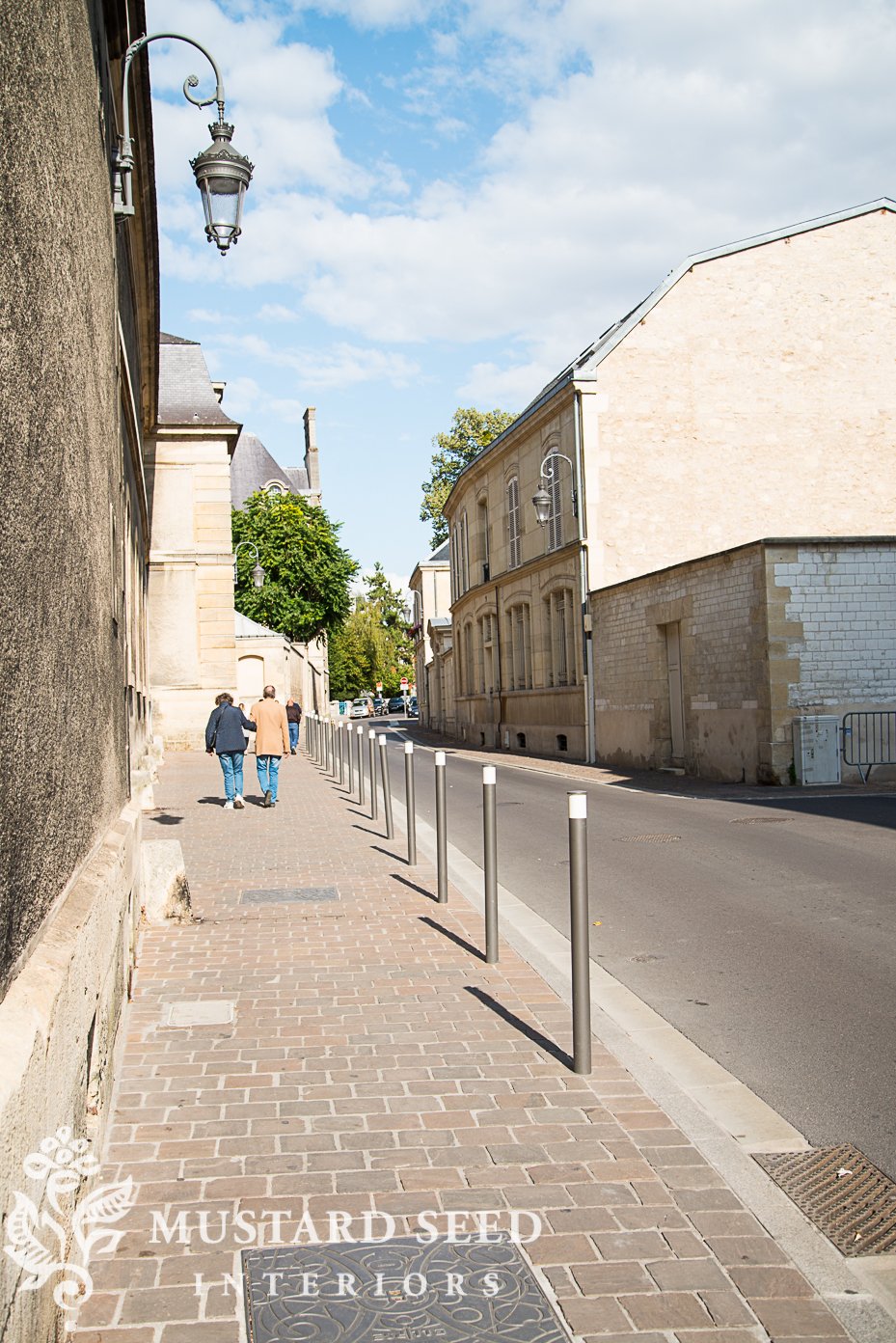 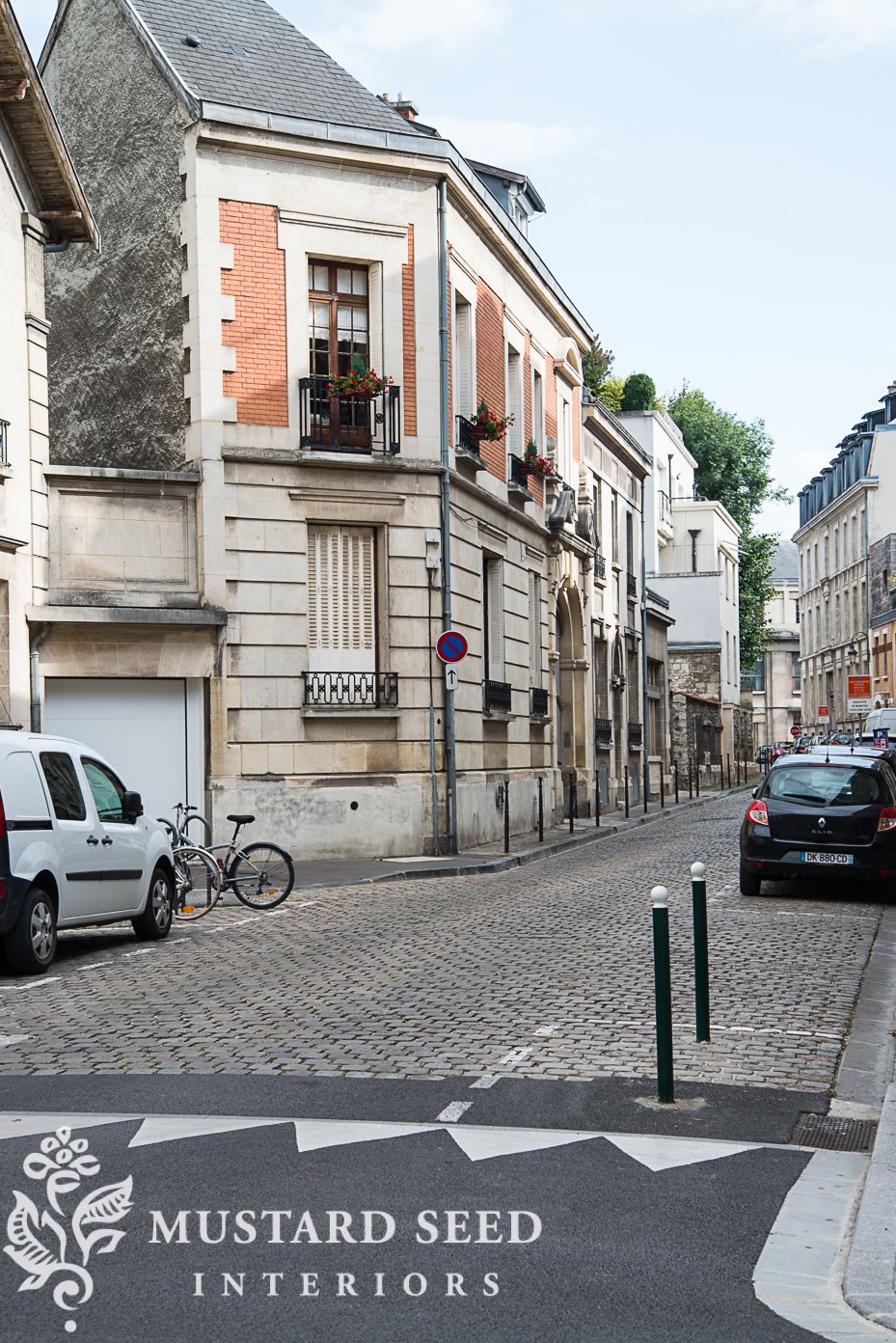 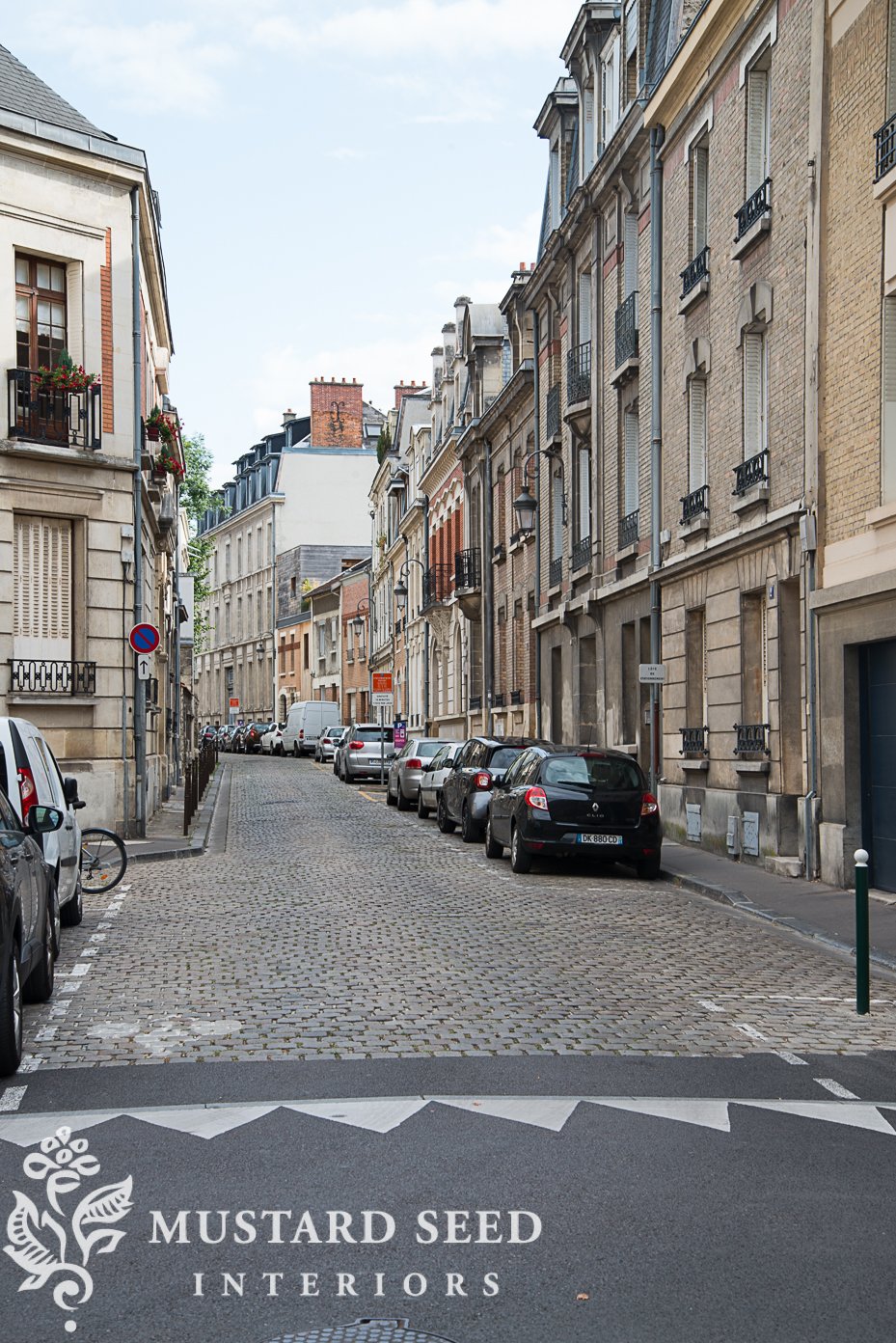 Reims and I will have to meet again one day.

On the way home, I took more pictures for my out-the-window painting series… bucolic scenes of fields, barns, cows, sheep, and airy clouds.  I have more reference photos than I could paint in a year.

We ate leftovers, a baguette, cheese, and fruit for dinner that night, enjoying our balcony and digesting the day. 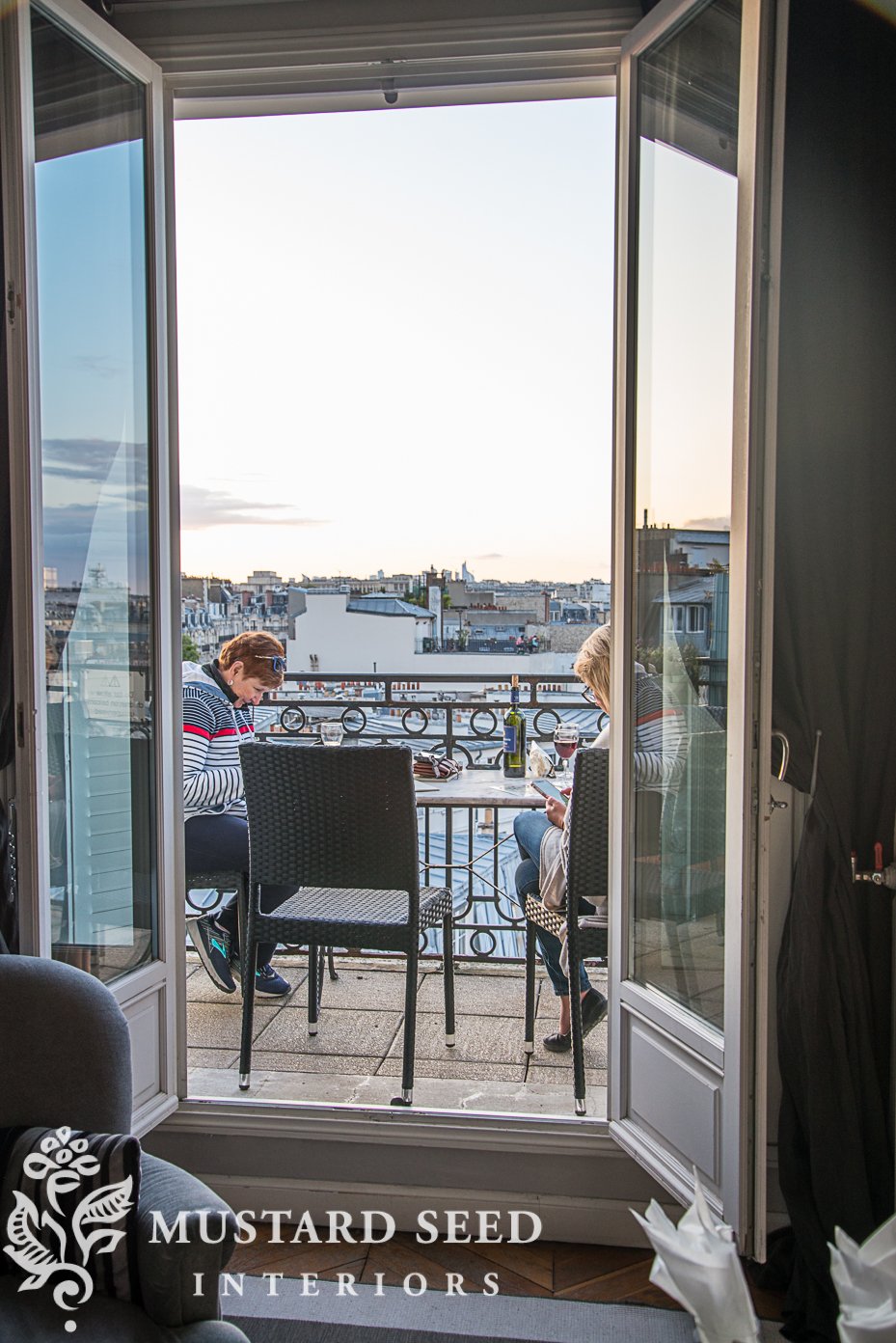 The next day would be our last in Paris before we took the train to Florence and it was completely unscheduled.