For Christmas, I got a cookbook called Upper Crust – Homemade Bread the French Way.  It’s an excellent book if you’re interested in learning about or improving your bread baking.  As I read through it, I was surprised to see a recipe for German/Bavarian soft pretzels (bretzels.)   These delicious soft pretzels spilled over the German border into France and were adopted by the region of Alsace.  For those who don’t know, I’m a military brat who spent most of my childhood in Germany and soft pretzels were my very favorite thing.  I was excited at the idea of being able to make an authentic-tasting recipe at home, so I made my first batch on New Year’s Day. 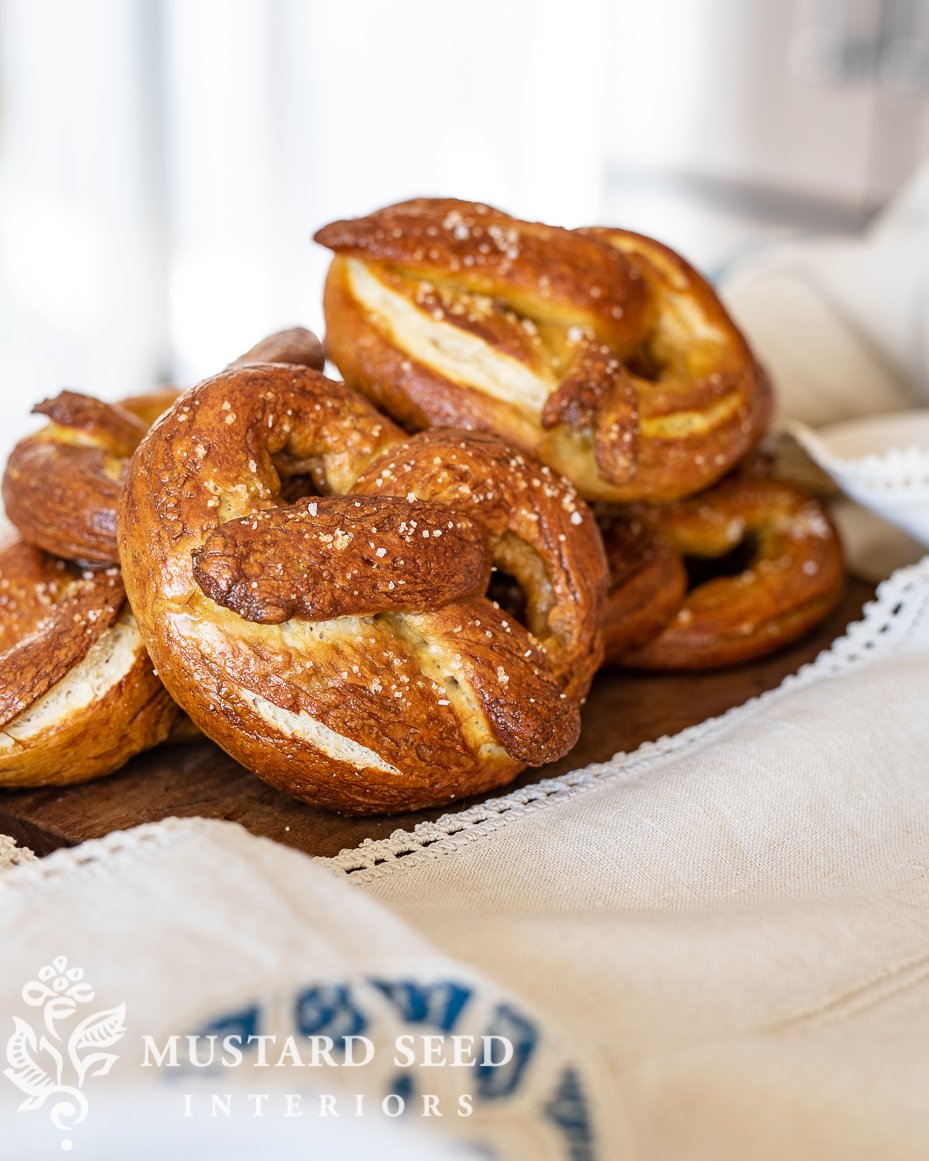 Over my winter break, perfecting Bavarian pretzels became one of my missions.  I think I ended up making five batches over three weeks and I tested, tweaked, and tasted.  Lots of tasting!  I don’t want to say they are perfect because they are still made by a fallible human, but my last batch was pretty darn close to perfect.  It was the kind of recipe that I took a taste of and was immediately brought back to a time and place.  I didn’t just want to eat up the Bavarian pretzels but take in everything I miss about Germany and relish a few moments of vivid memories of my childhood.

If you want to skip through my chit-chat, the printable recipe is at the bottom of the post. 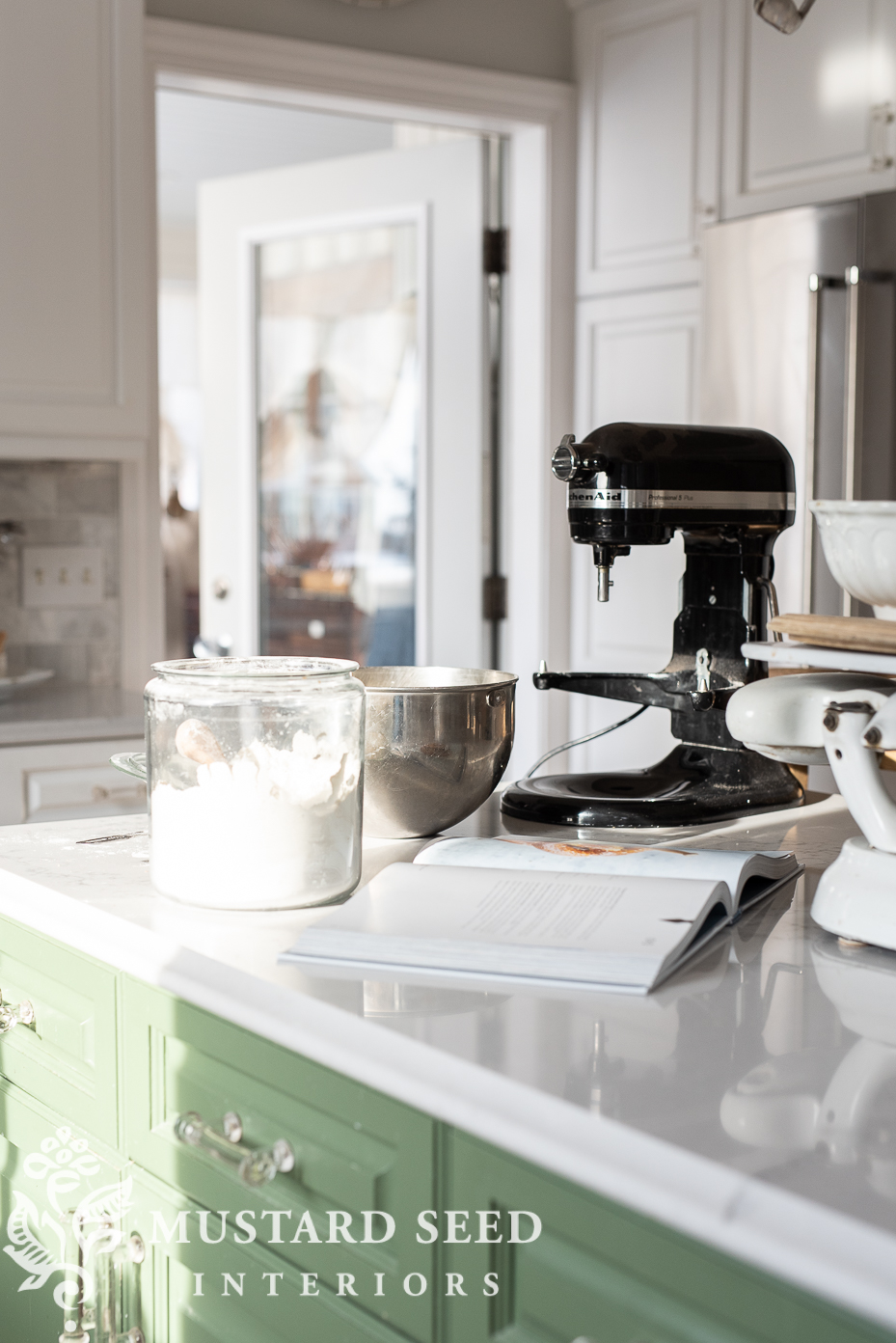 One of the things I had to test was the mixer speed.  In the recipe in the book, it says to mix on speed one for 5-7 minutes.  I have a Kitchen Aid stand mixer and have always used speed two for kneading dough.  My mixer didn’t even have a speed one.  It goes from stir to two.  So, I went against what I knew and tried kneading on the stir setting.  Yeah, that was a mistake.  The pretzels still turned out okay, but the dough was tough and not as elastic as I knew it should be.  Some of the Bavarian pretzels pictured were from those batches, but this is the dough that turned out perfectly when I kneaded it on speed two for about five minutes… 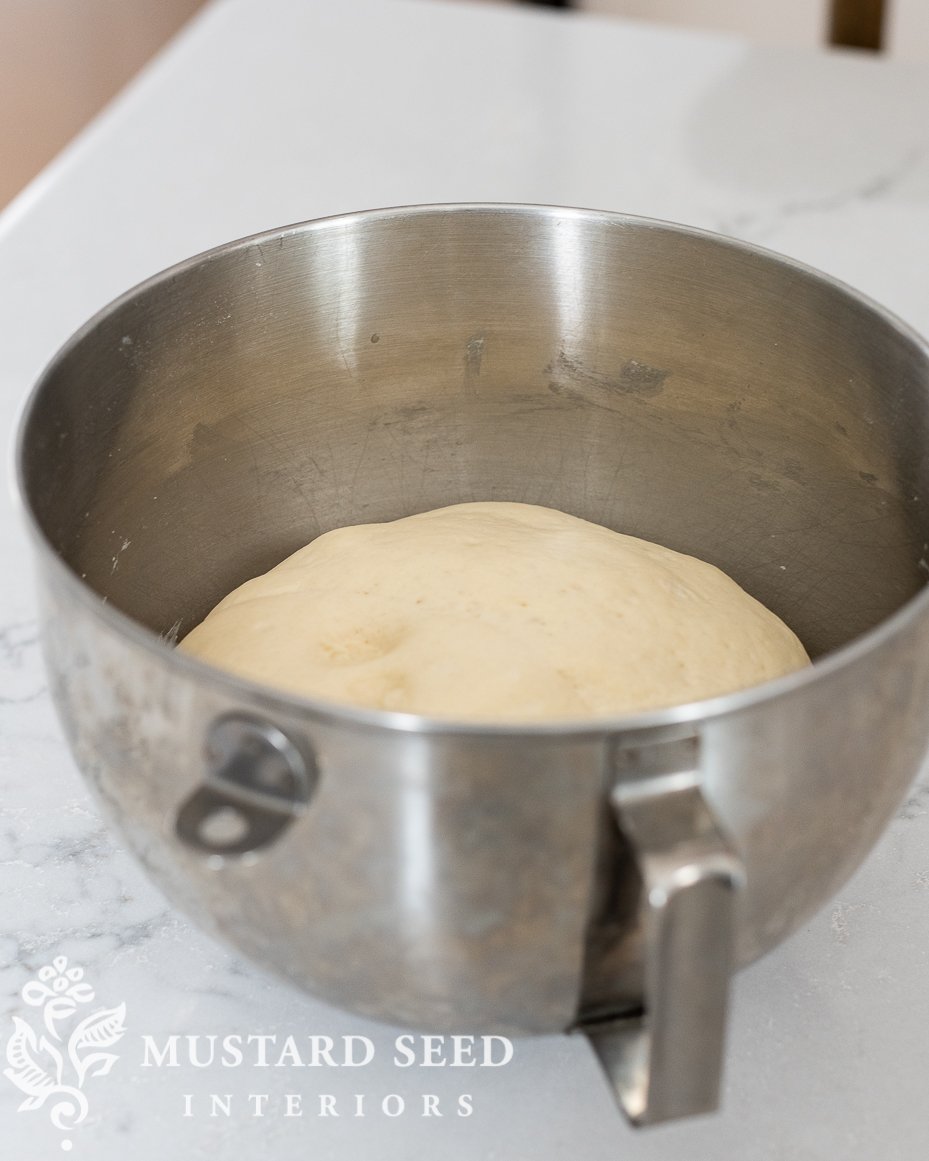 The other part of the recipe I needed to figure out was the butter.  It didn’t specify if the butter should be cold, softened, or melted.  I tried it all three ways and I think melted worked the best.  Melted, but cooled a bit so it wasn’t piping hot going into the dough.  I melted the butter in the microwave and then let it sit while the yeast was dissolving.

The other key to making successful Bavarian pretzels was weighing the ingredients instead of measuring them in cups.  It’s much more precise and weighing yields the perfect balance of wet and dry ingredients. 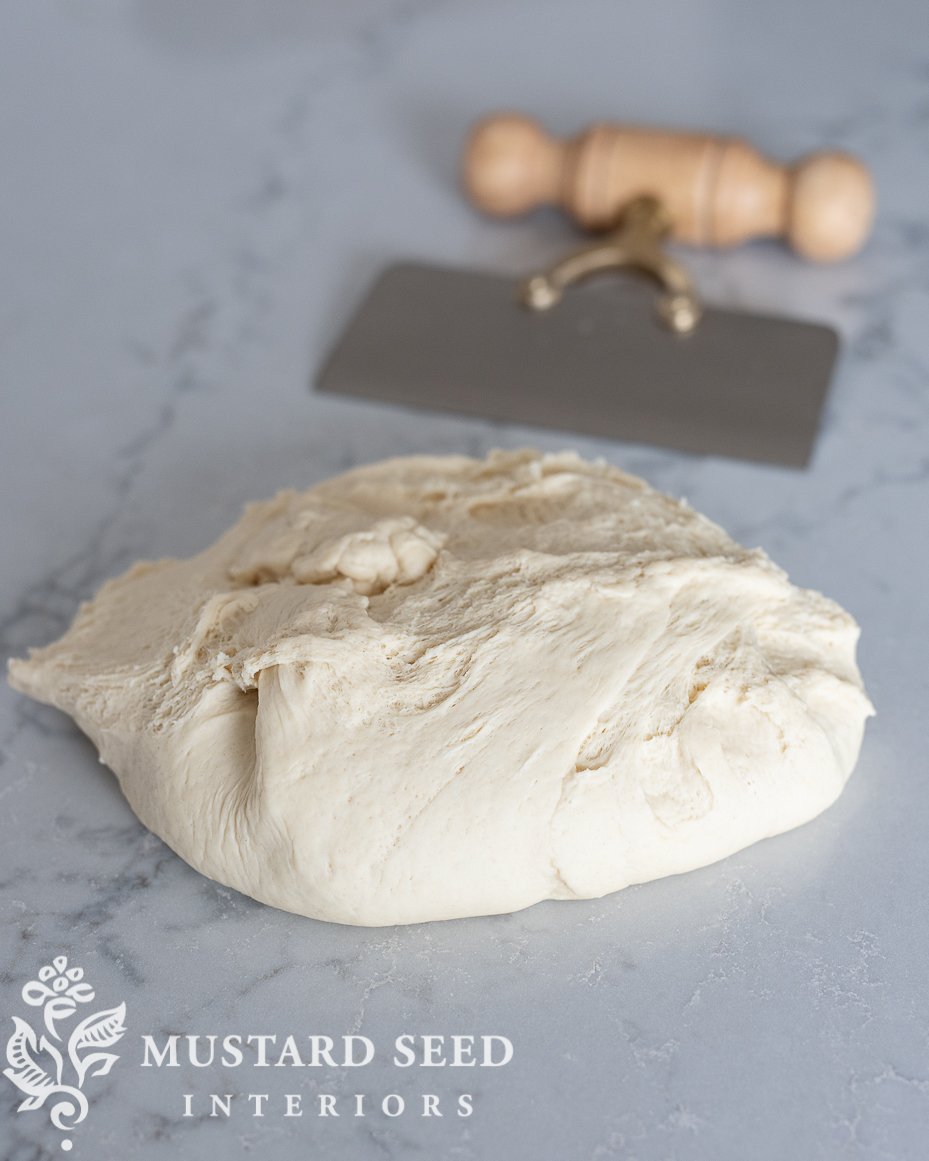 Making dough of any sort is something you have to do bad several times to learn what good bread dough looks and feels like.  When you get it right, it feels like you’ve unlocked a secret of the universe. 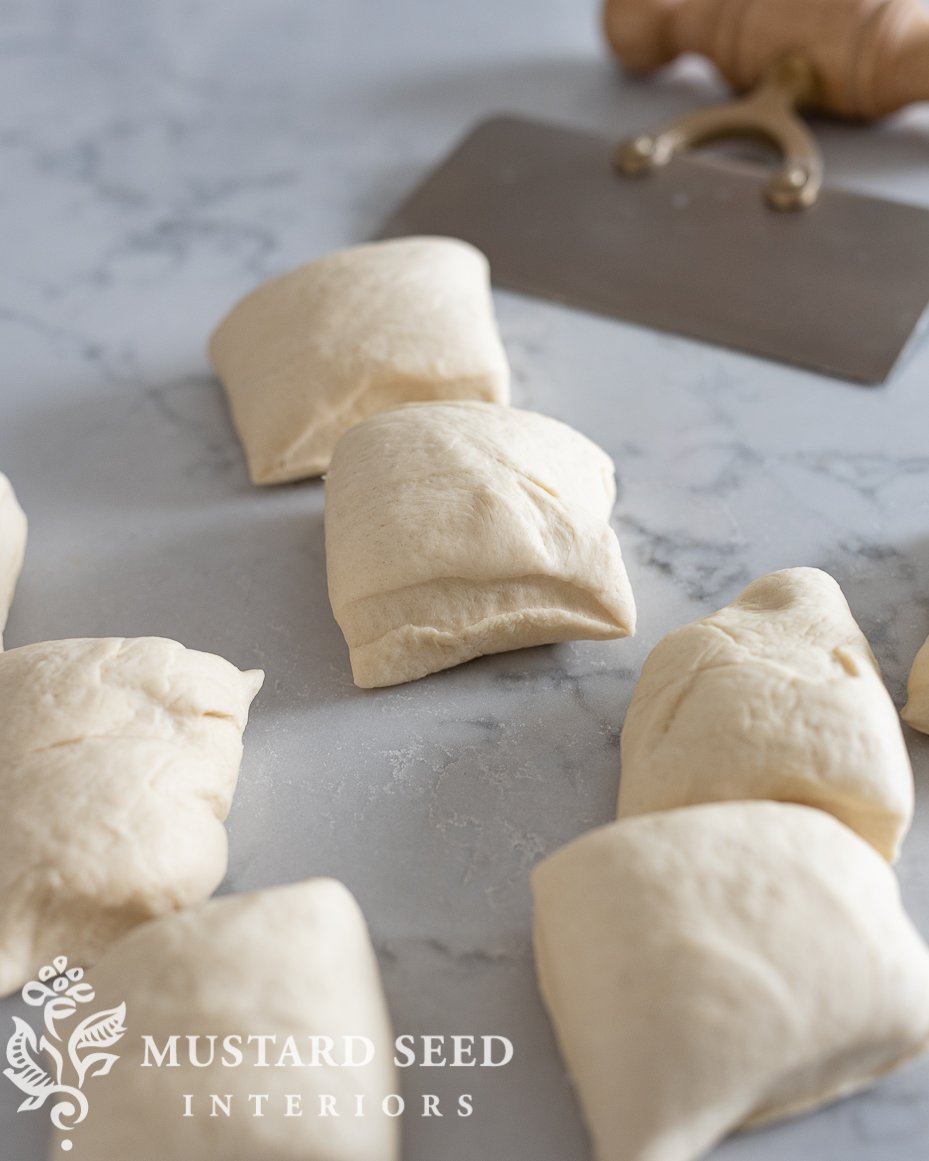 Of course, as I’m making my Bavarian pretzels, I’m imagining Paul Hollywood of The Great British Baking Show poking and pulling at my finished pretzels.  I could almost hear him saying things like, “These are over-prooved” or “These are a bit stodgy.  See…you went wrong with the kneading speed and the butter temperature.”

But, I felt like I nailed the last batch. 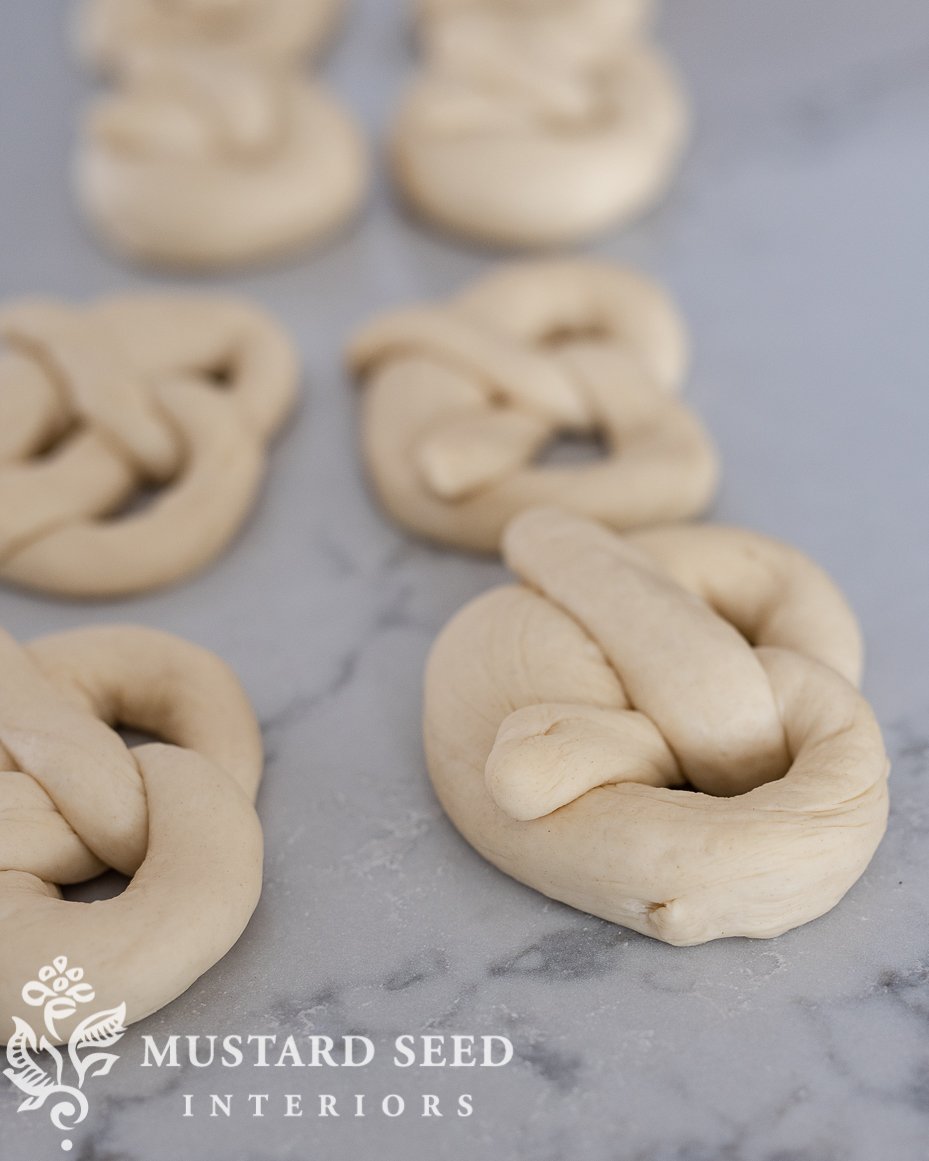 Poaching the pretzels is key to getting the right texture and crust for authentic-tasting Bavarian pretzels.  I’ve made pretzels before that are just baked and they are fine, but they don’t taste the same as the real deal. 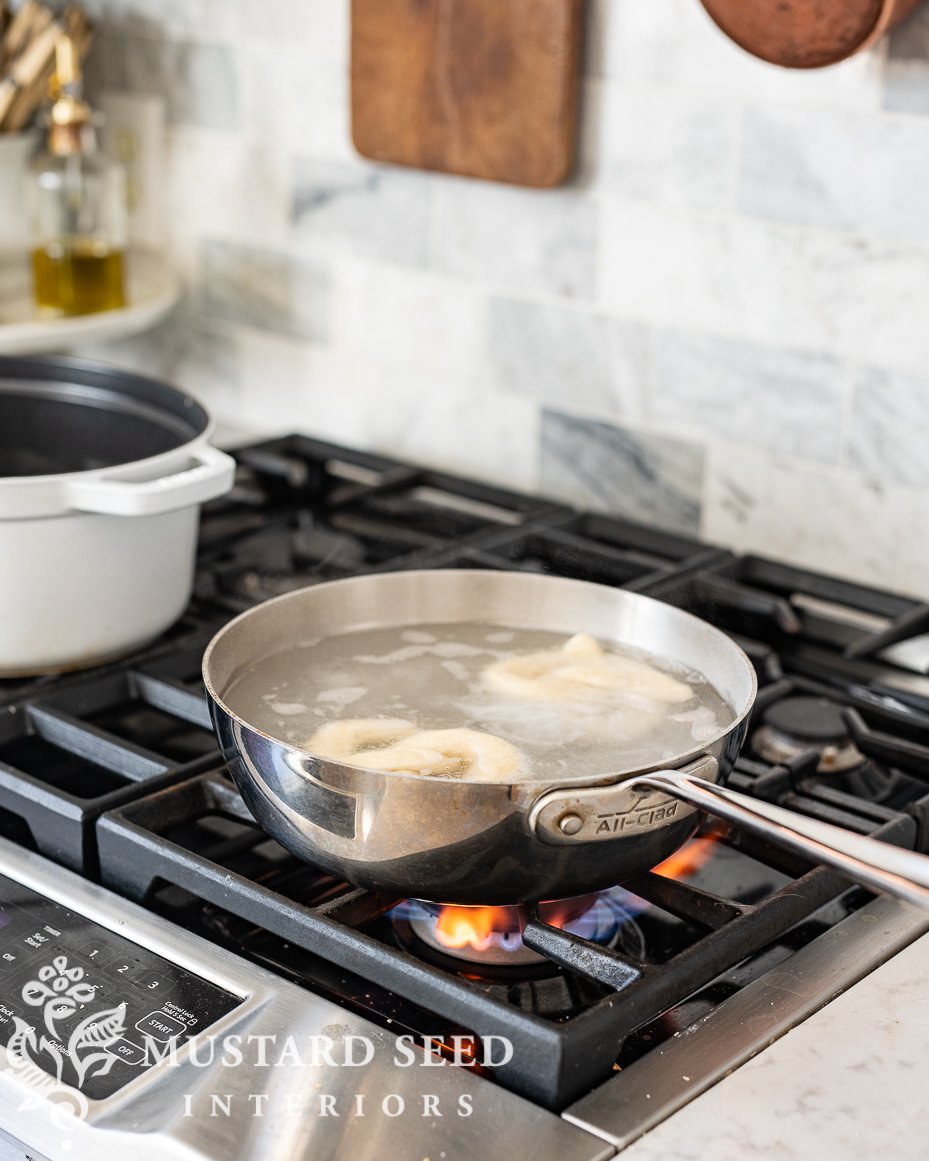 I poached two at a time in a saucier, which is a shallow and wide pan that is perfect for poaching.  (I made one adjustment to this recipe in February 2022.  The crust of the pretzel would sometimes be unpleasantly bitter from the baking soda, so I did some research and tried adding 2 Tablespoons of brown sugar to the poaching liquid.  That was just enough to cut the bitterness, but it doesn’t make the pretzels sweet.) 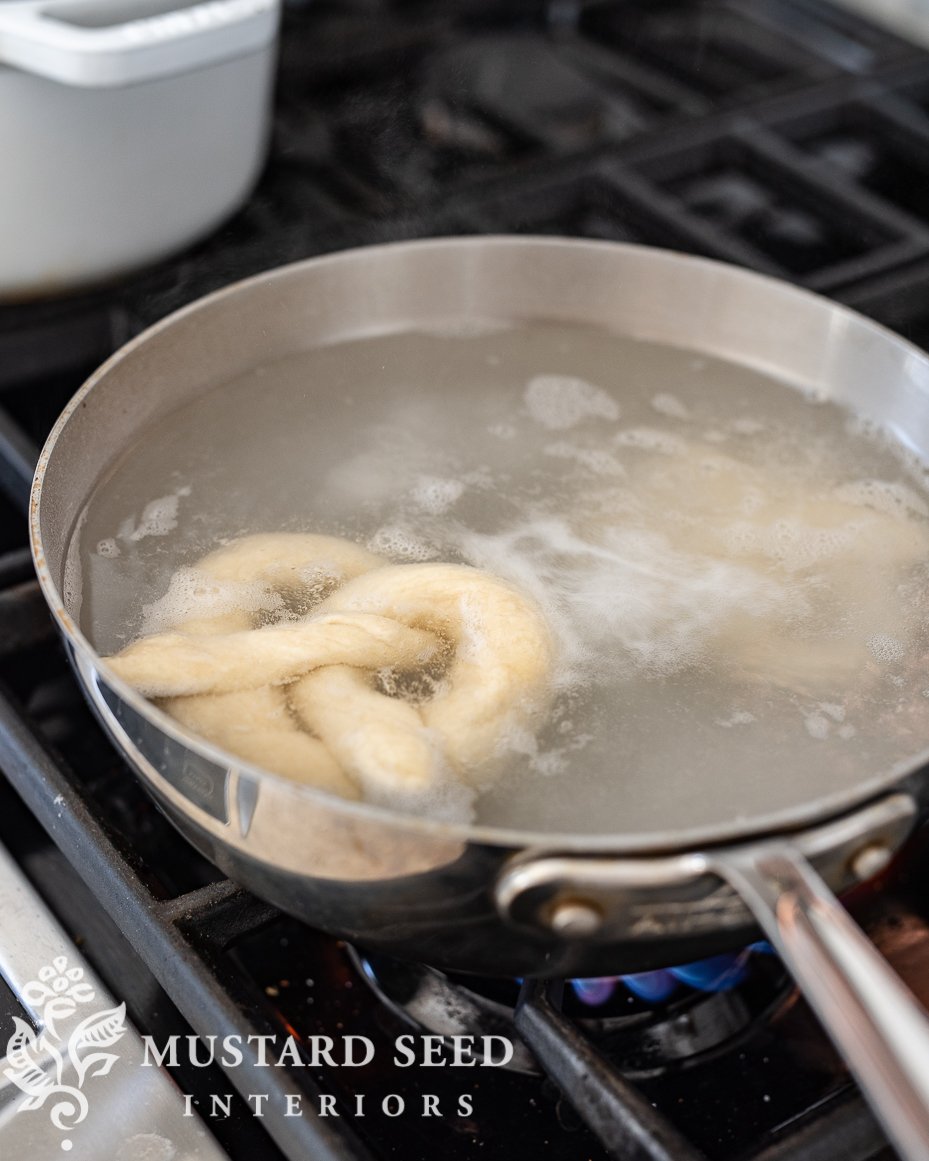 It gets a little foamy when the pretzels are in there, so you do have to keep an eye on it! 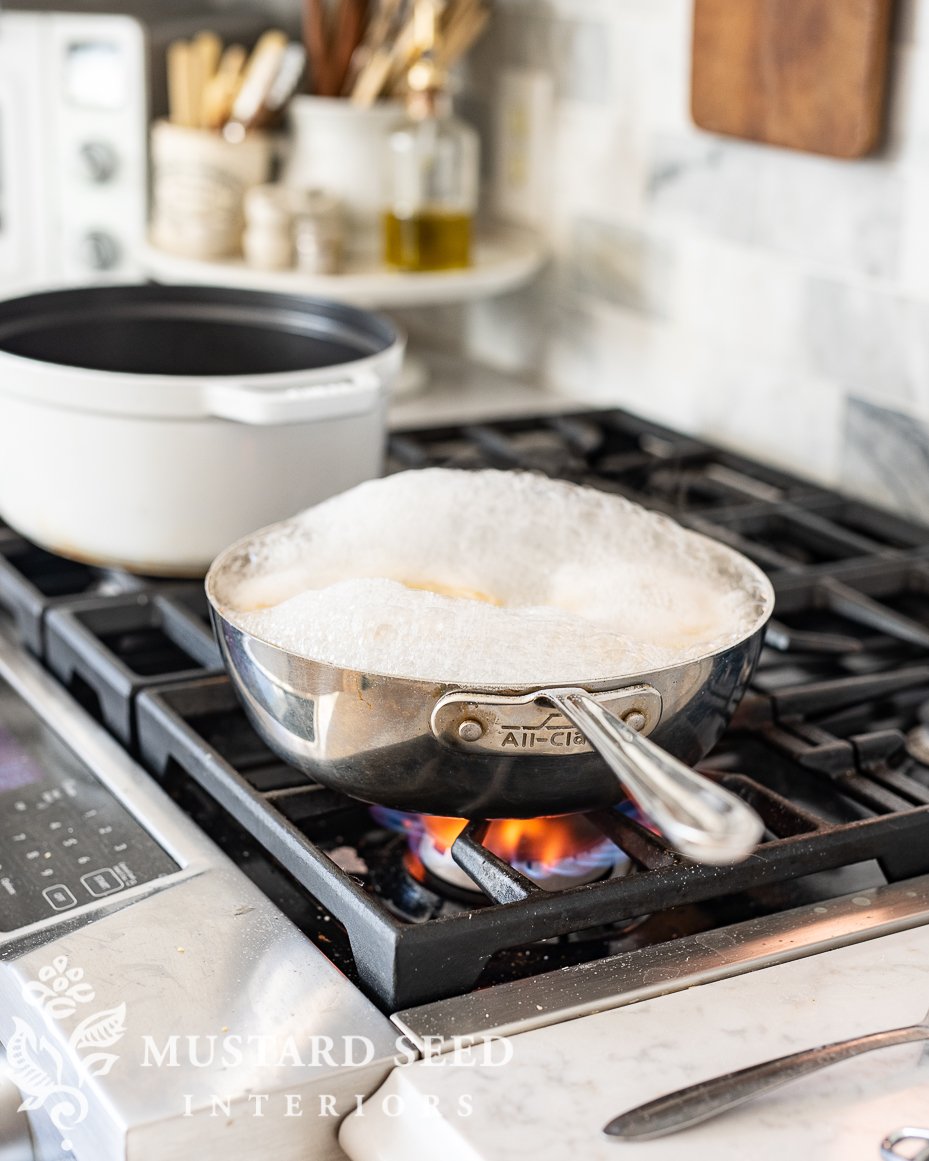 When the pretzels were poached, I sprinkled them in Fleur de Sel, salt that I brought home in my suitcase from France.  Of course, you can just buy it online. 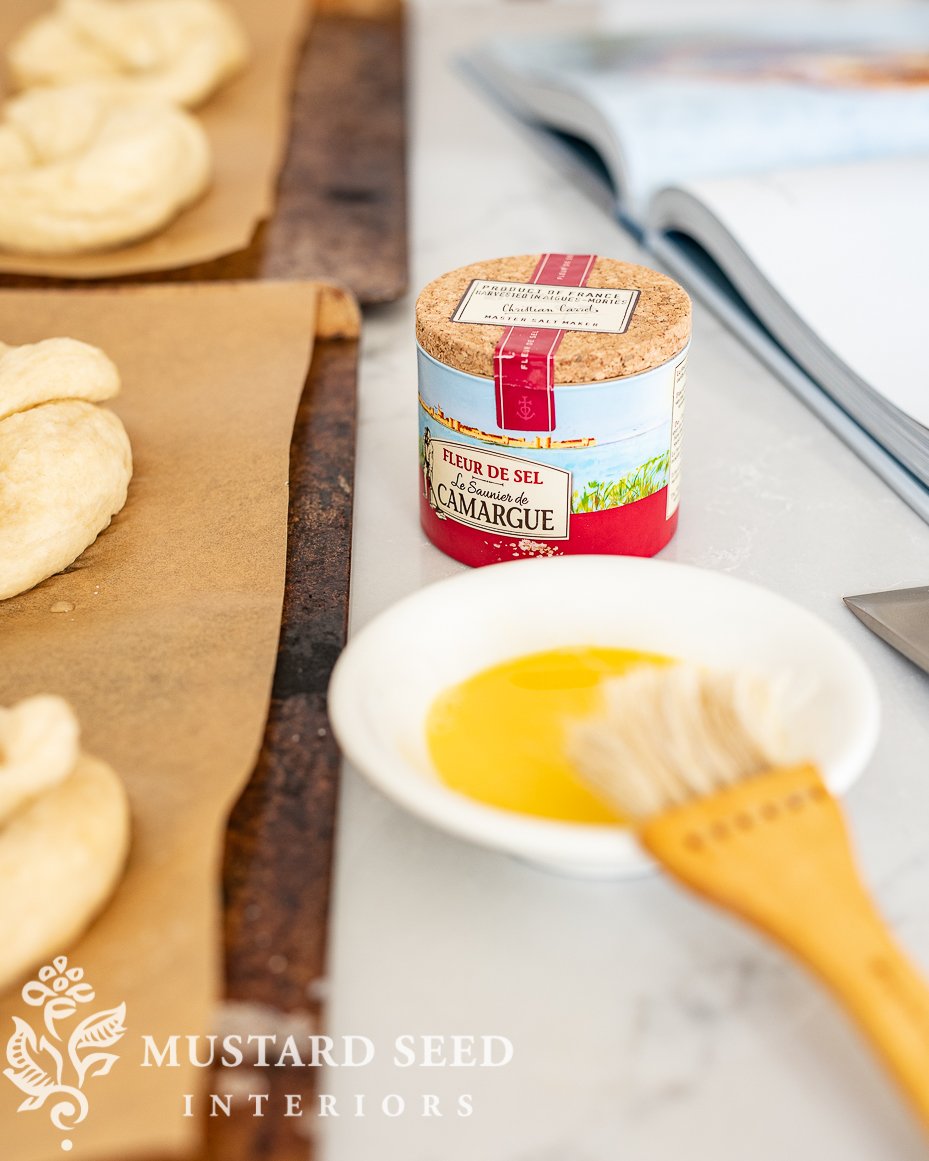 The combination of the poaching and egg wash is what gives the Bavarian pretzels their richly-colored crust and chewy texture. 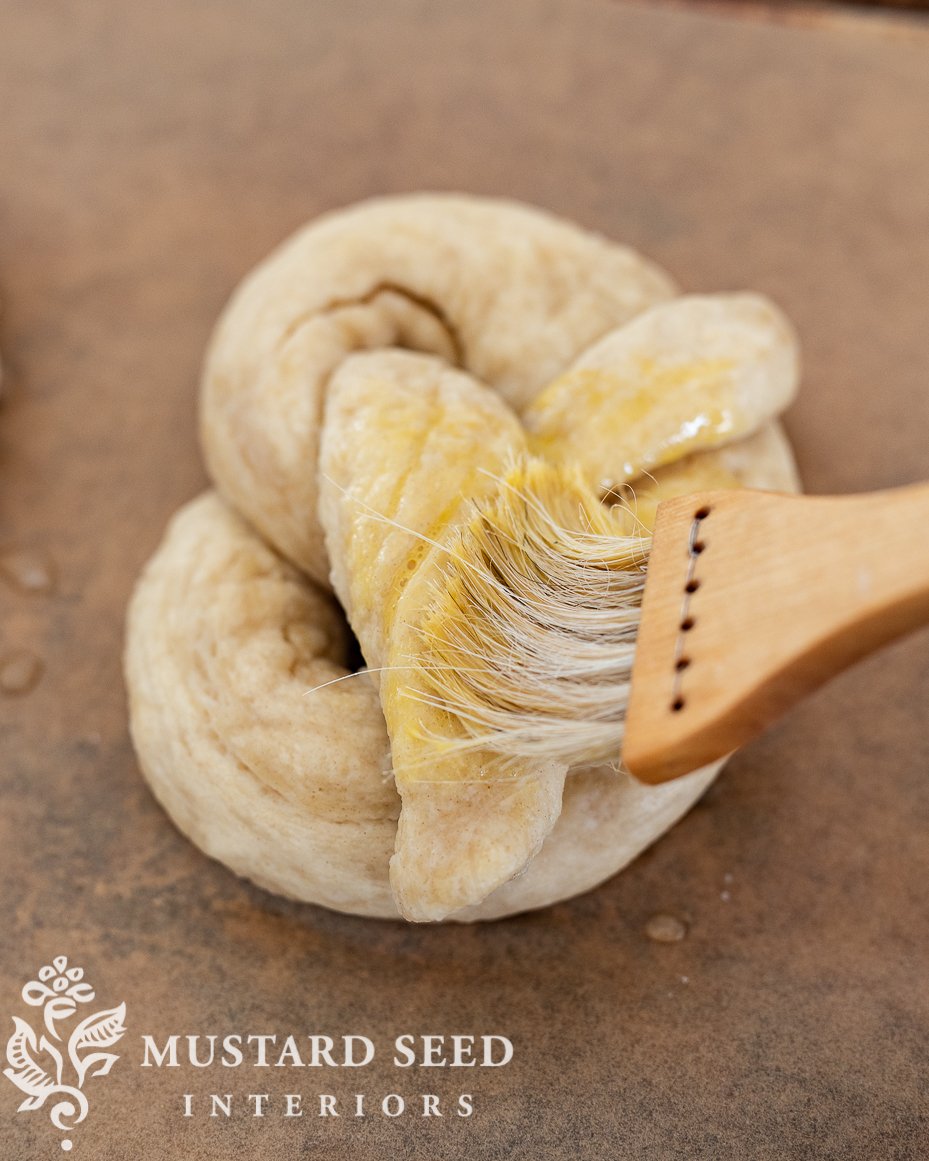 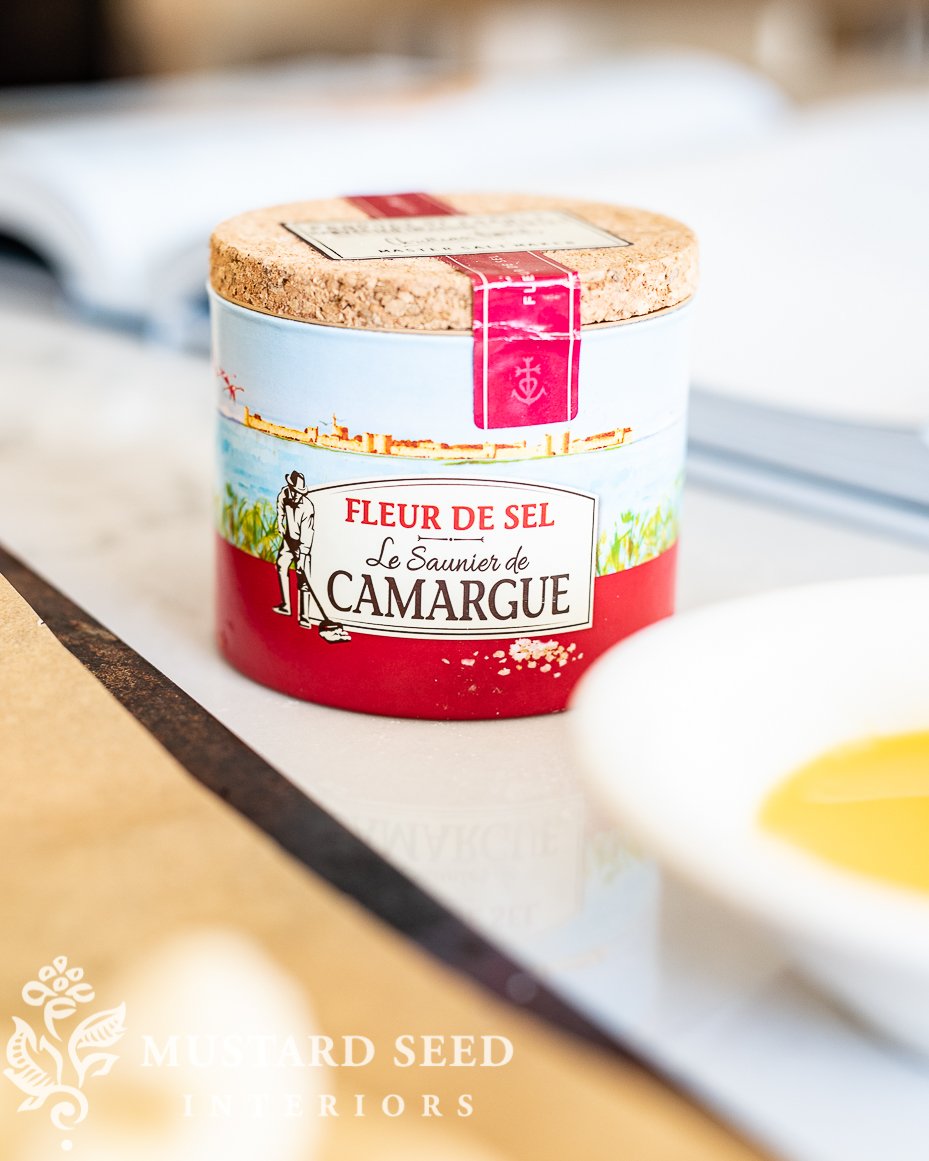 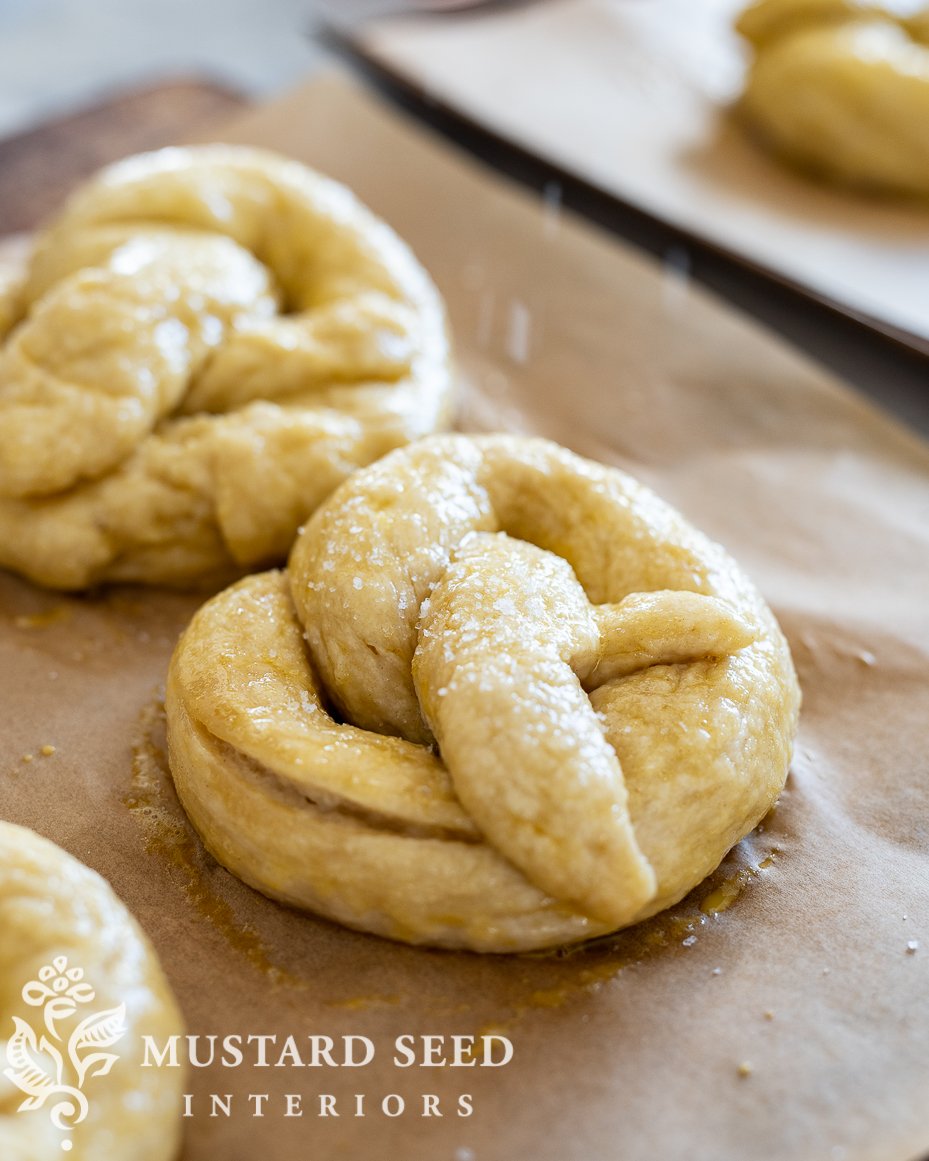 I baked all eight for 20 minutes, rotating the baking sheets to make sure the pretzels cooked evenly. 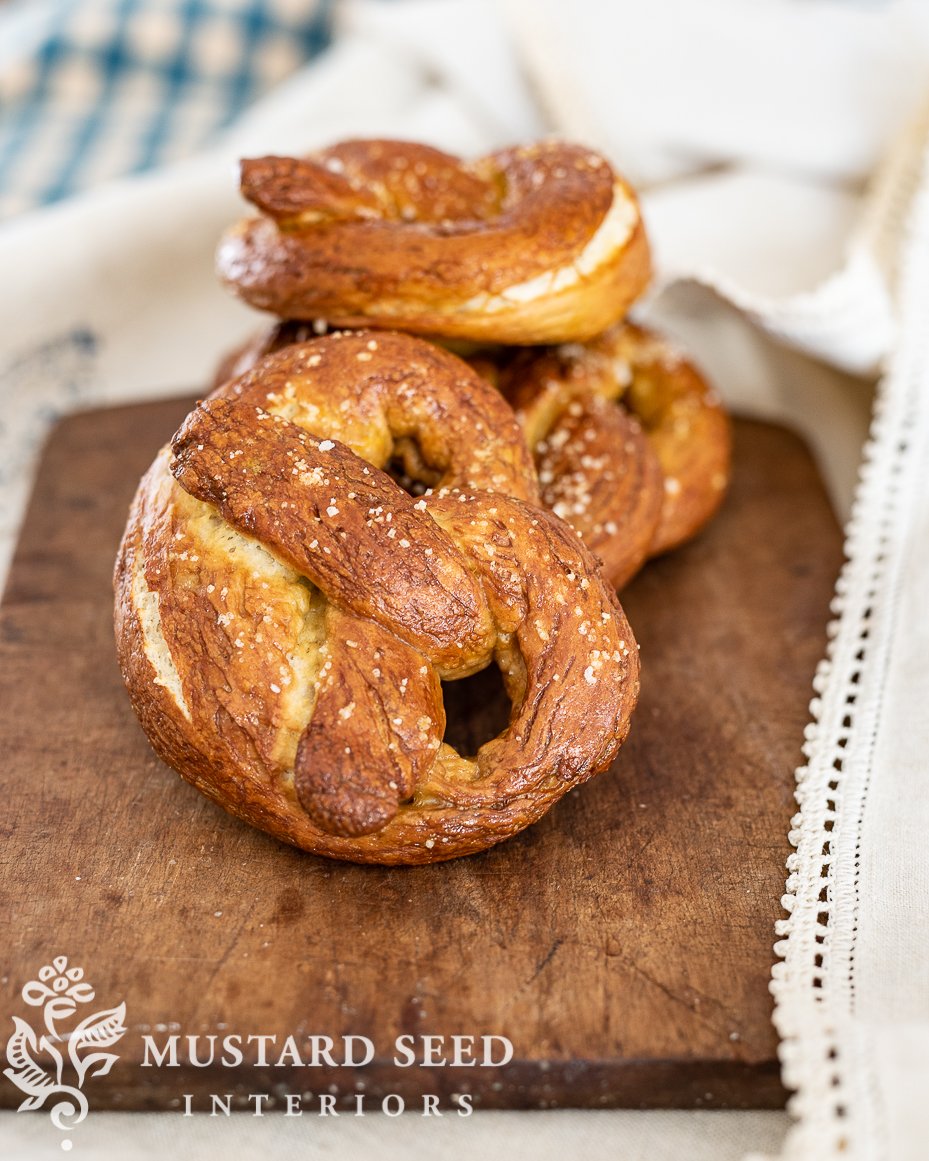 The Bavarian pretzels pictured above were one of the batches when the dough wasn’t quite right.  You can see that the texture of the crust is a little lumpy.  They still tasted great, but I needed to work on the texture.

The batch below was my last batch and they were spot on. 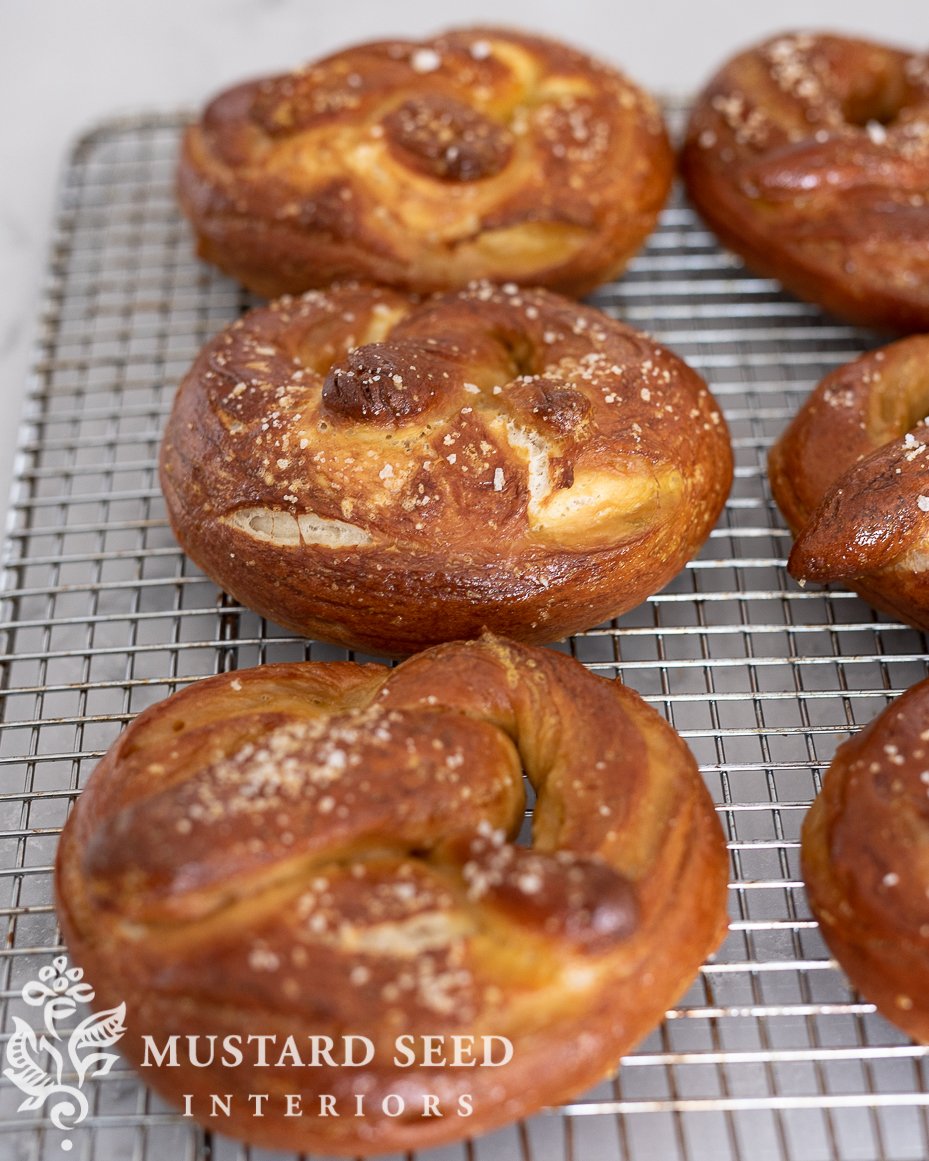 Oh man, even just looking at these Bavarian pretzels makes me look forward to making them again. 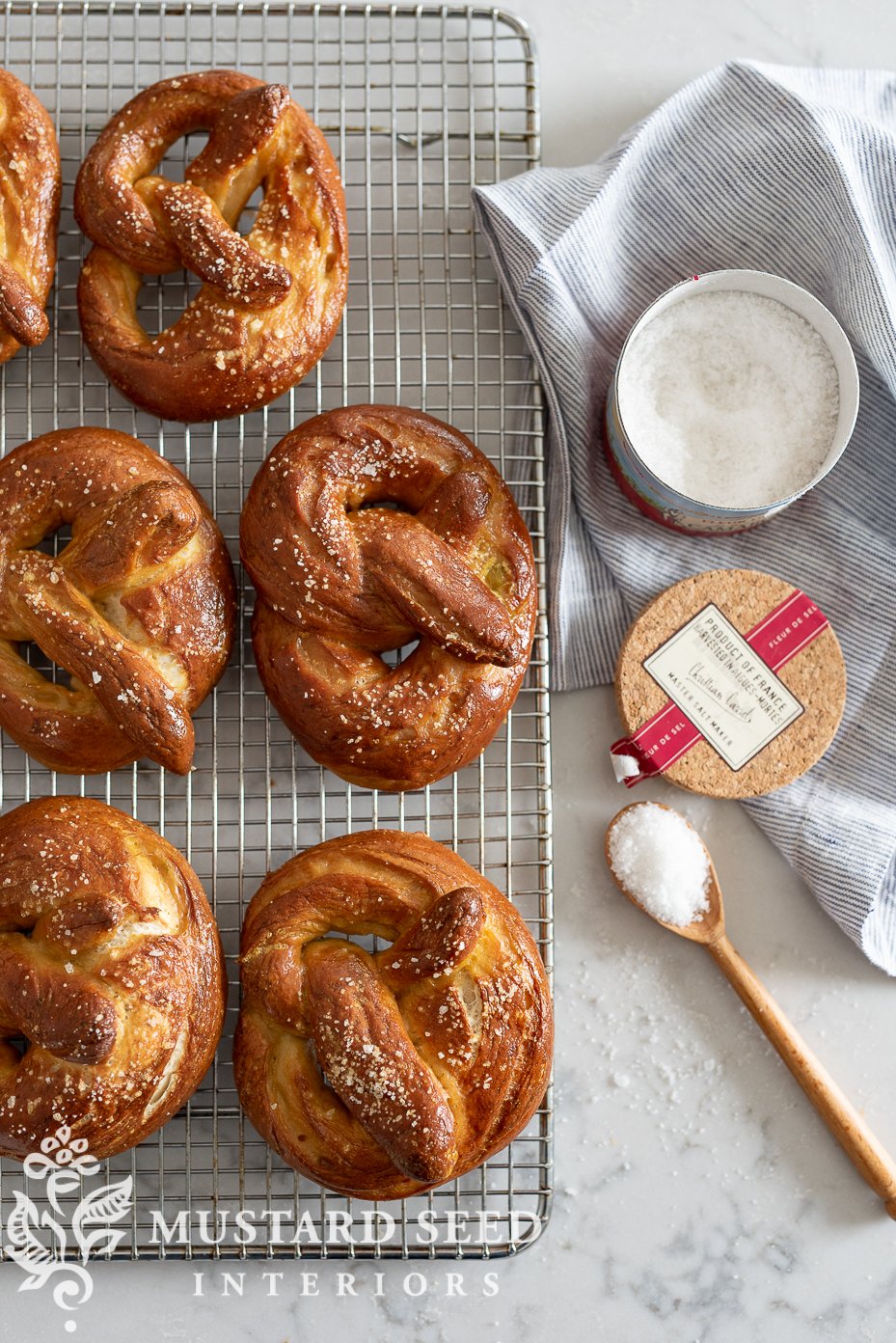 They are a perfect snack for snow days, for a Superbowl party, and, of course, for an at-home Octoberfest celebration.  I used to buy pretzels regularly from the “brötchen man” who sold baked goods and sweets out of a food truck on our military base.  Pretzels was also the highlight of the weekend volksmarches we often did as a family.  Warm chicken broth and a pretzel slathered with butter…  That was a little piece of heaven.

I hope you enjoy this recipe for Bavarian pretzels as much as I do.

You can find more recipes HERE. 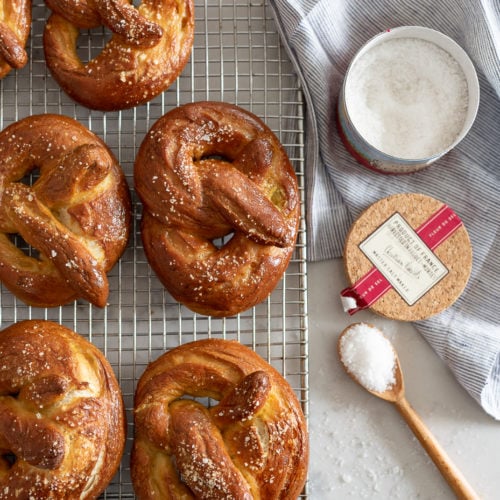