So, I have fully embraced the crocheting thing!  I made three trips to the craft store last week, which is no small thing because I couldn’t drive.  I had to ask someone to take me and witness me exploring this new world of yarn.  I’ve actually always been drawn to yarn and have found excuses to buy some here and there for projects, but what makes good yarn for pom-poms and garlands doesn’t necessarily make good yarn for a crochet project.  I learned that as I made the most ridiculously thick and heavy hat that I ended up turning into a thick and heavy scarf that’s only a little less ridiculous.

I love learning, finding new creatives to follow, and having an excuse to buy some new supplies!  I know yarn can really add up, but crocheting is a pretty thrifty endeavor, especially if you buy yarn on sale.  I even ordered some water-resistant Icelandic wool from a specialty store online and it was $5.00 for a skein, which seems reasonable to me if I can get a hat out of it.

So, instead of making the same hat over and over again, I’m exploring new stitches and patterns to try to expand my crochet vocabulary and keep my creativity engaged.  One reader suggested making dishcloths to practice a new stitch I learned and I loved that idea.  Someone gave me a hand-crocheted dishcloth for a wedding gift and I’ve always admired it.  It’s stayed with me for 20+ years, so that says a lot.

So, I bought a large roll of 4-ply cotton yarn to use for that.  It looks like a good dishcloth yarn, but I might be totally off base on that! 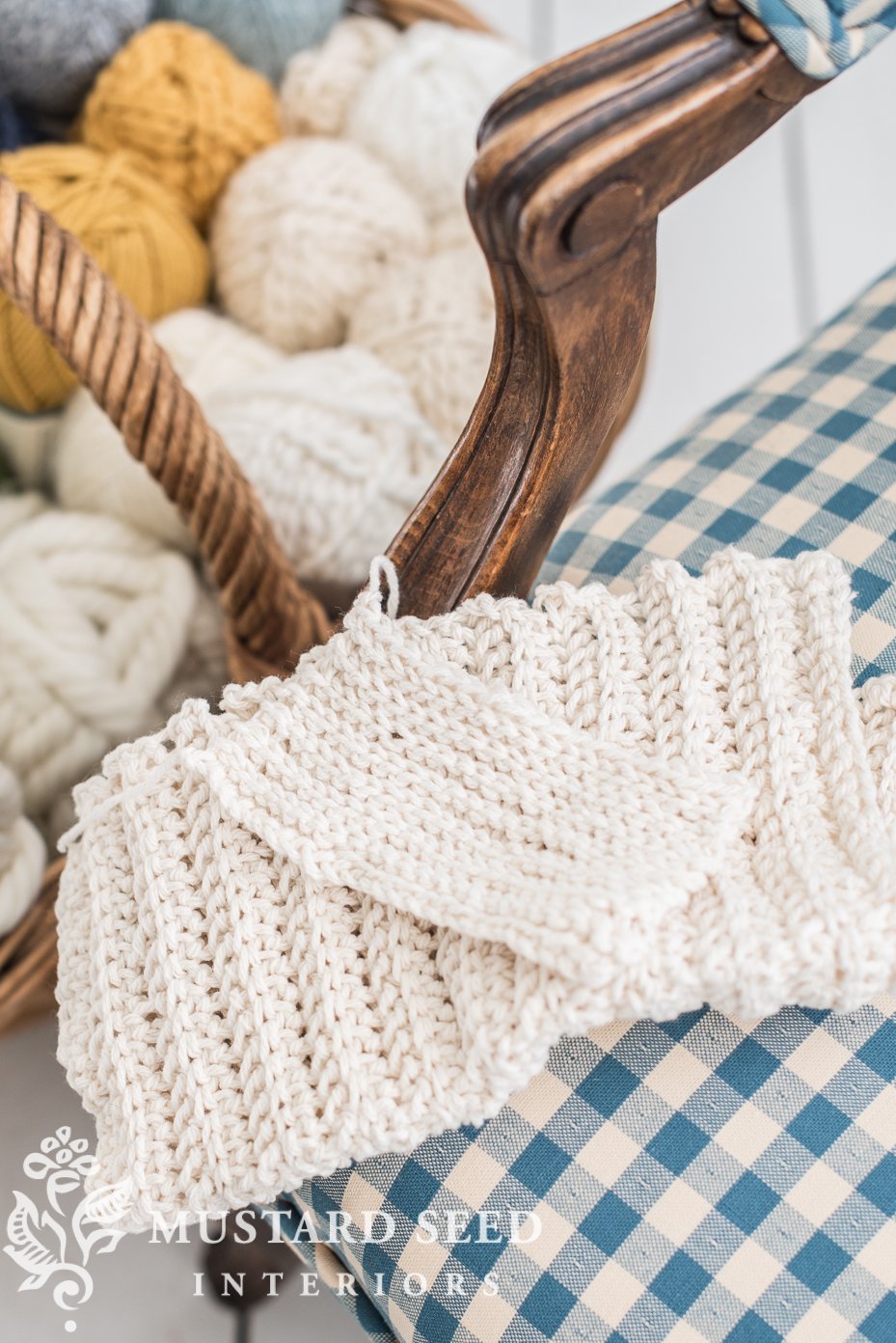 I’m also using it to make little practice swatches as I play around with stitches.  It’s a project I’ve been tucking in my purse to take with me when I might be waiting.

As far as other yarn goes, I am trying different weights and raw materials.  I have mostly gone for wool, cotton, alpaca, and some blends.  I expect this experience to be a lot like learning oil paints.  It takes working with the product to find your “palette” and preferred brands.

For those who are interested, the super bulky cream yarn is Jumbolicious by Yarn Bee.  The mustard, white, and cream cotton yarn (that looks a little squiggly) is Cotton XXL.  The chunky charcoal and dark blue are the Effortless Bulky yarn.  This is the yarn I used for the first hat I made and it was a good weight and forgiving.  I haven’t tried the other ones, yet, but I’ll let you know. 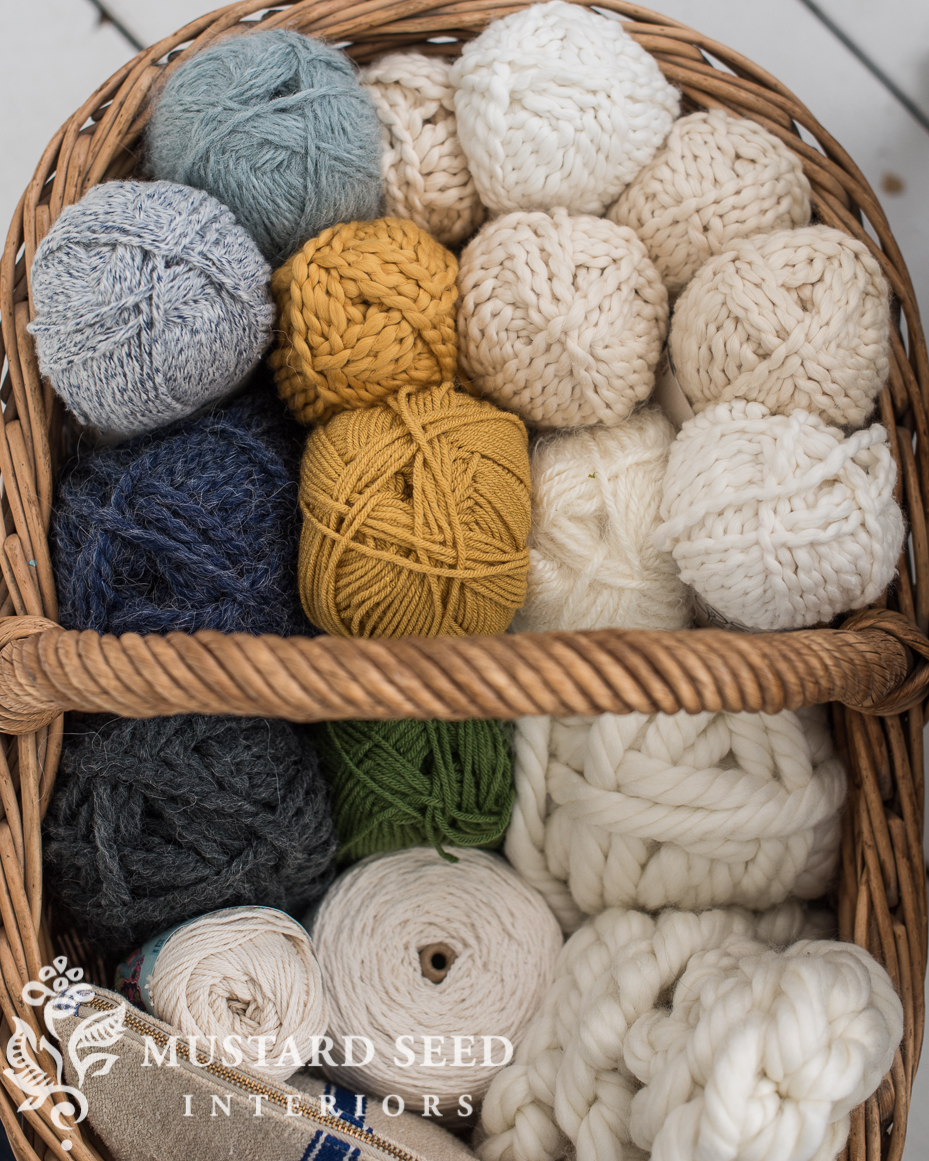 I can already tell that I’m going to have a good time testing it all out. 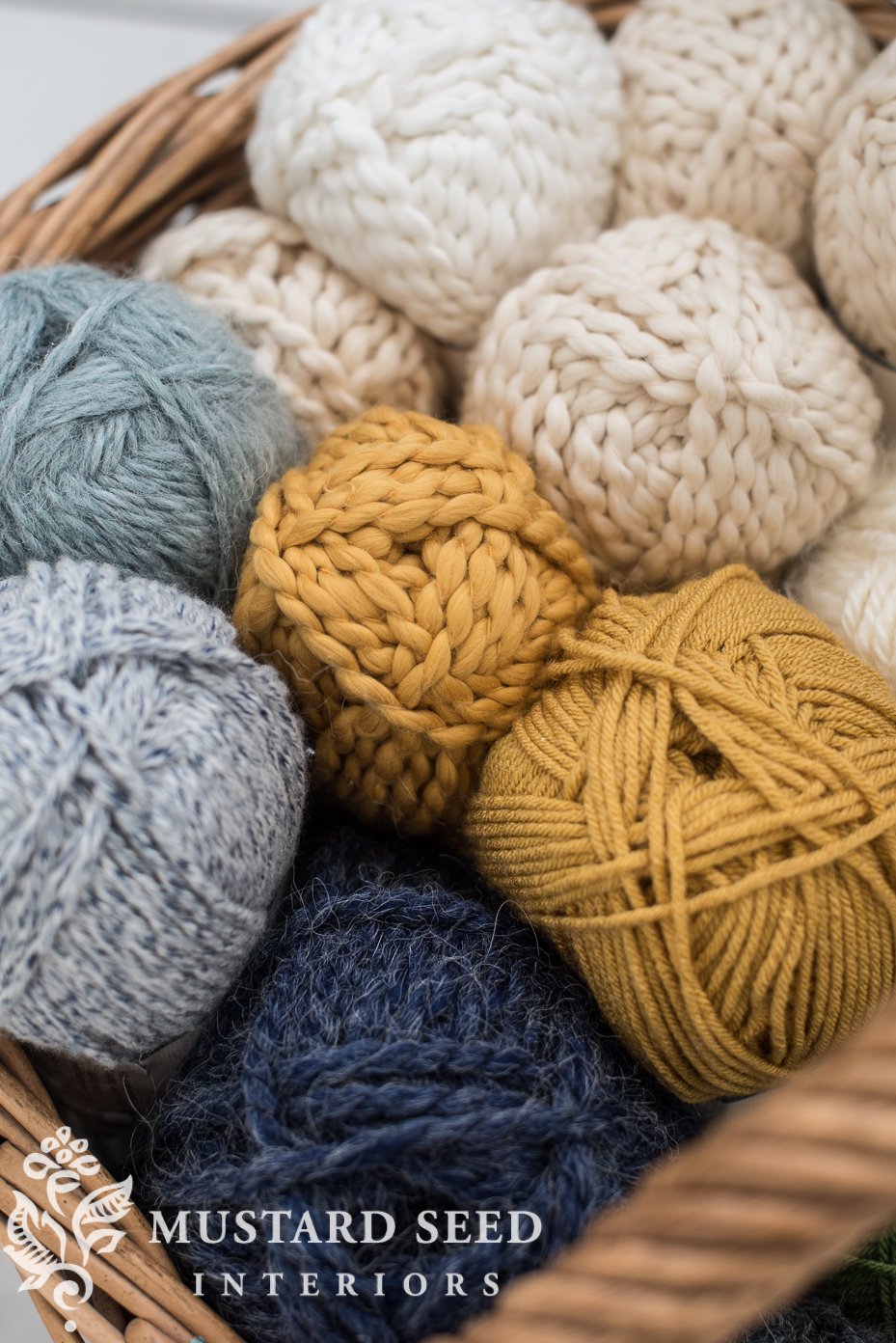 Until I put them to use, I enjoy having them tucked in a big, antique basket.  Doesn’t it look homey and inviting?  In my project queue is a beret, a pair of mittens, a couple of hats, and I’d like to learn a few variations of granny squares.  Some readers have asked me for a hat or to give away a hat…well, I’m open to that, but I am still learning!  You can certainly buy a more proficiently-made hat from Etsy!  I want to practice, so I’ll make more and offer them up.  It is a part of my therapy, after all. 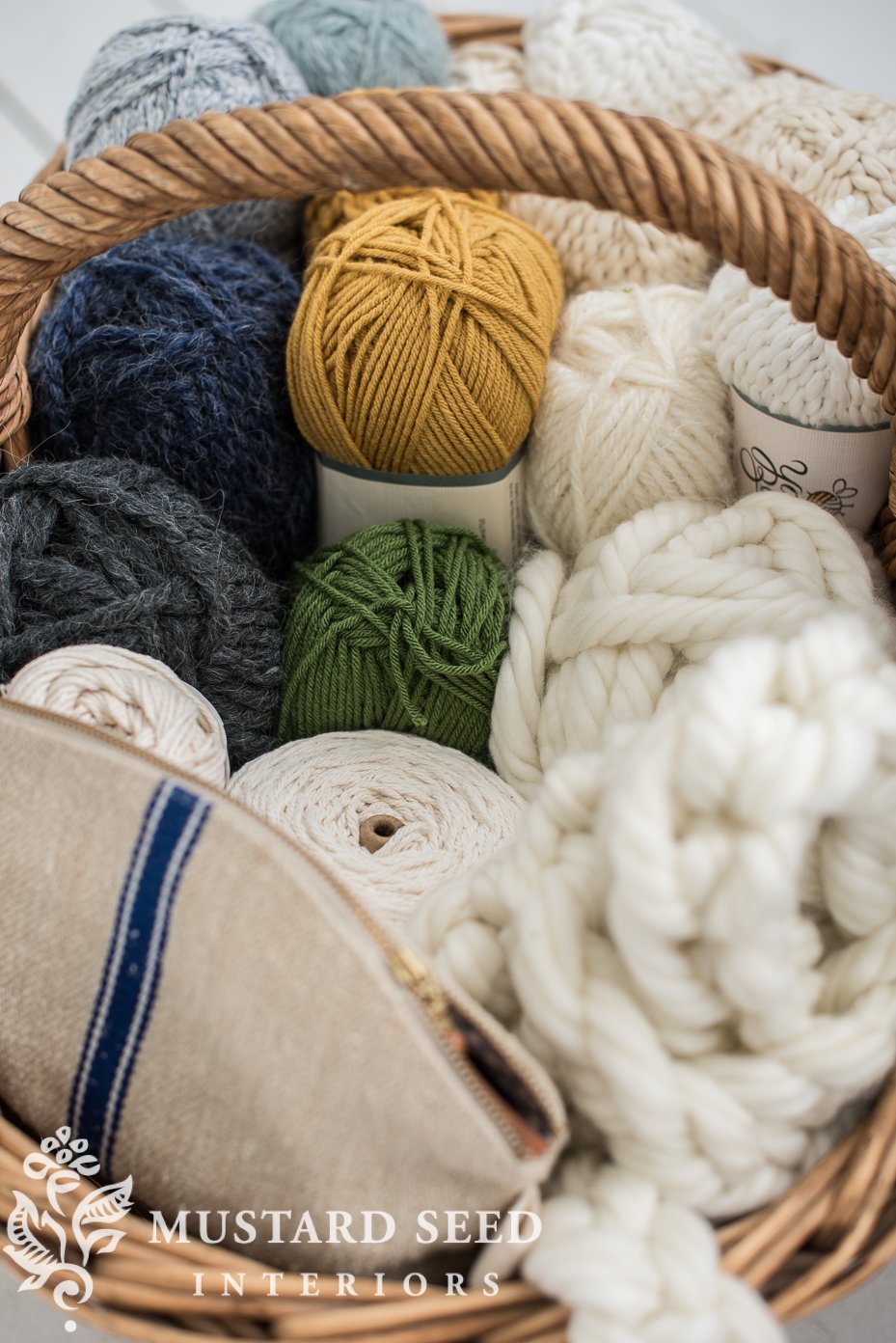 In my basket, I also keep a zipper pouch with my needles and scissors. 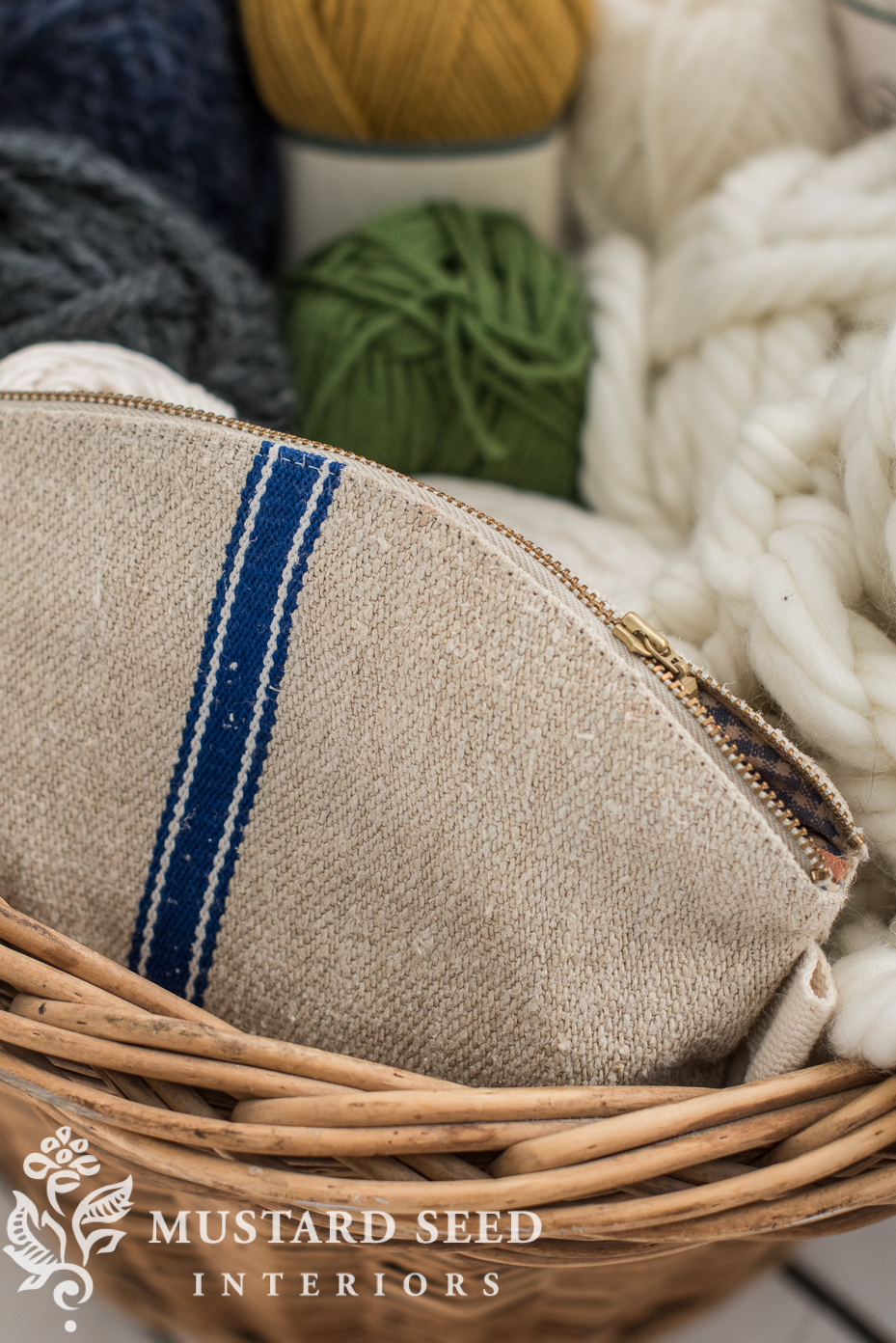 I ordered a set of larger needles for the super bulky yarn I bought, but after playing with it, I realized the yarn is just too thick.  I could make a chunky throw, but I just don’t think that’s my thing.  I’d rather make a more traditional throw with granny squares.  But, I’m still playing with some ideas… 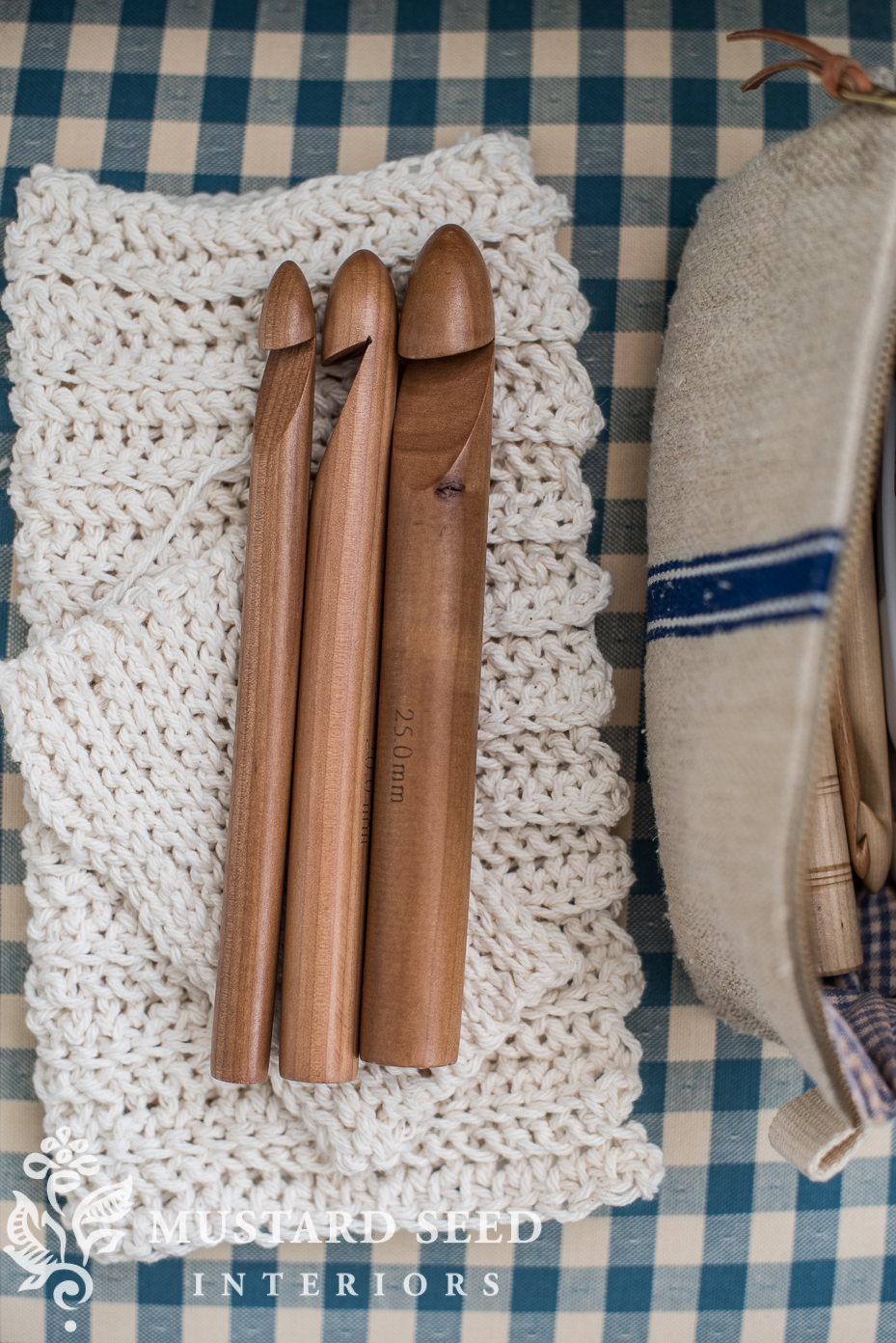 I was able to buy the rest of the needles off the shelf from Hobby Lobby.  I like the birch hooks, but that is completely based on how they look!  Well, I do like the feel of them and they do the job, but time will tell if they are really winners. 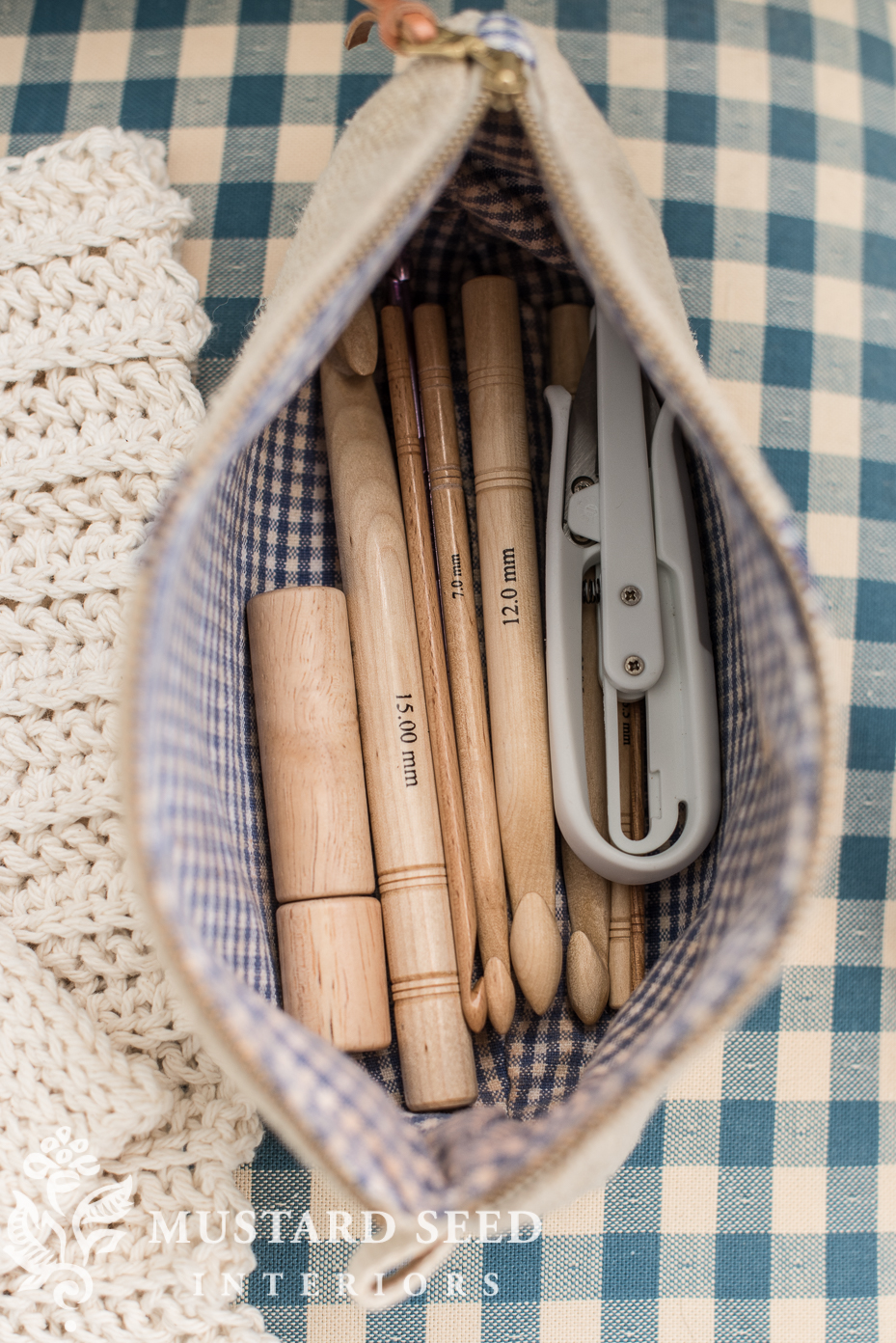 I also picked up a little wooden needle keeper to hold large needles for weaving in ends.  I didn’t even know those existed, but I was excited to find it.  It’s handy to keep these needles from getting lost at the bottom of the pouch. 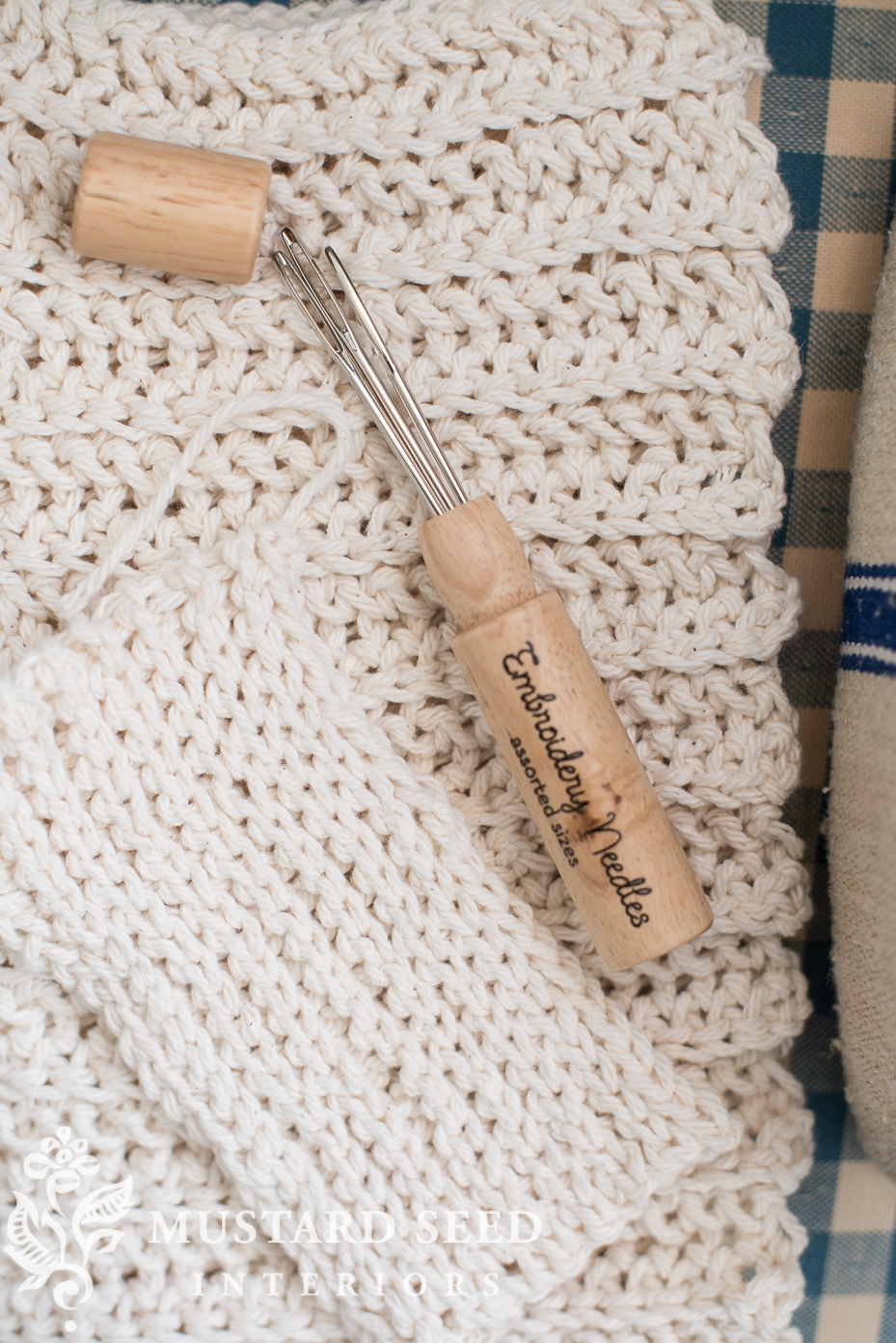 I also keep a small pair of scissors for trimming ends in the pouch.  I like this pair because I can lock and cover the blades and prevent being poked when digging for the scissors. 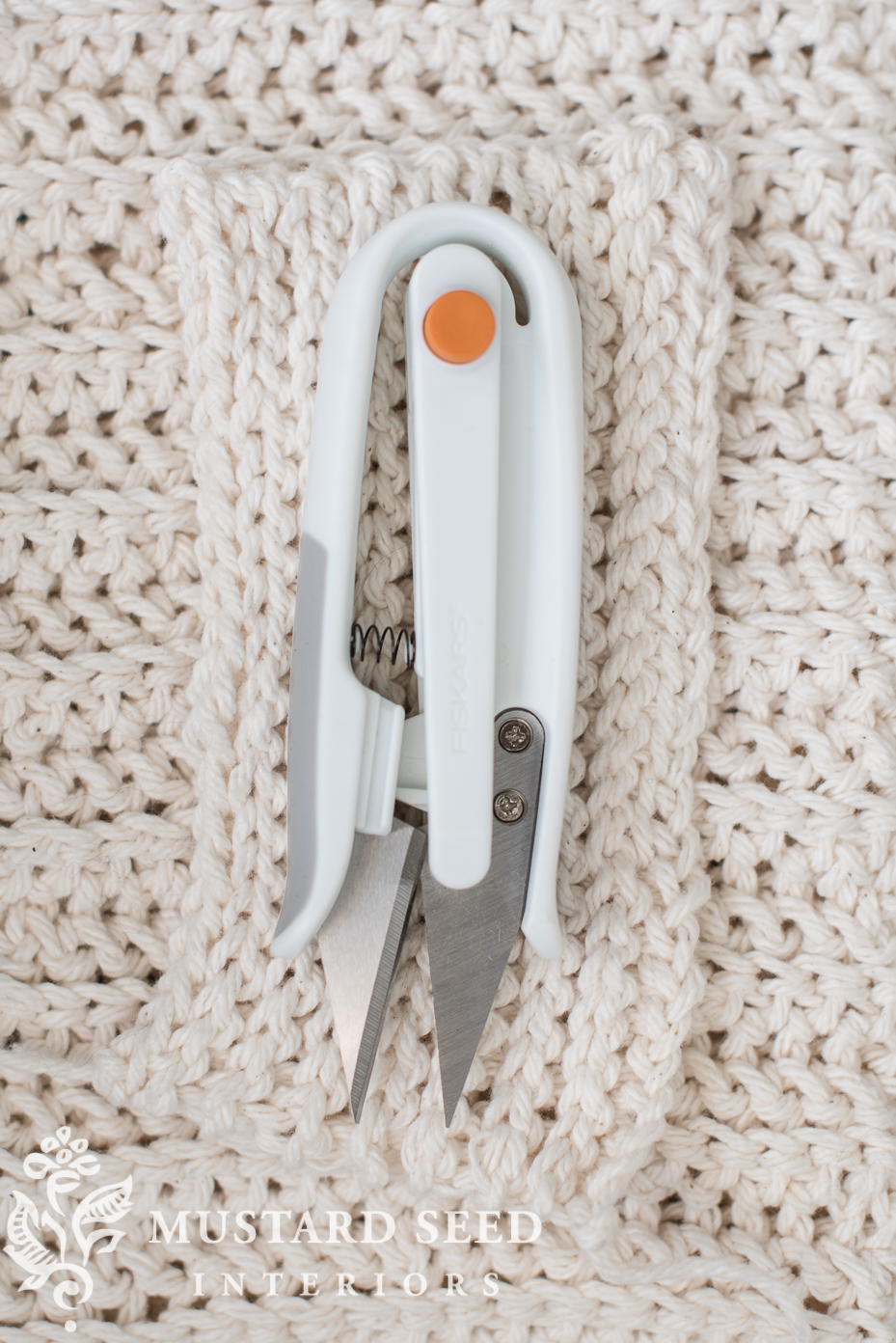 In addition to the hats I shared in my last post about crocheting, I made another hat, a pair of mittens, a scarf, and the dishcloth showed at the beginning of the post.  I was excited to make a mustard hat and matching mittens to go with my black and cream plaid winter coat and they turned out pretty well! 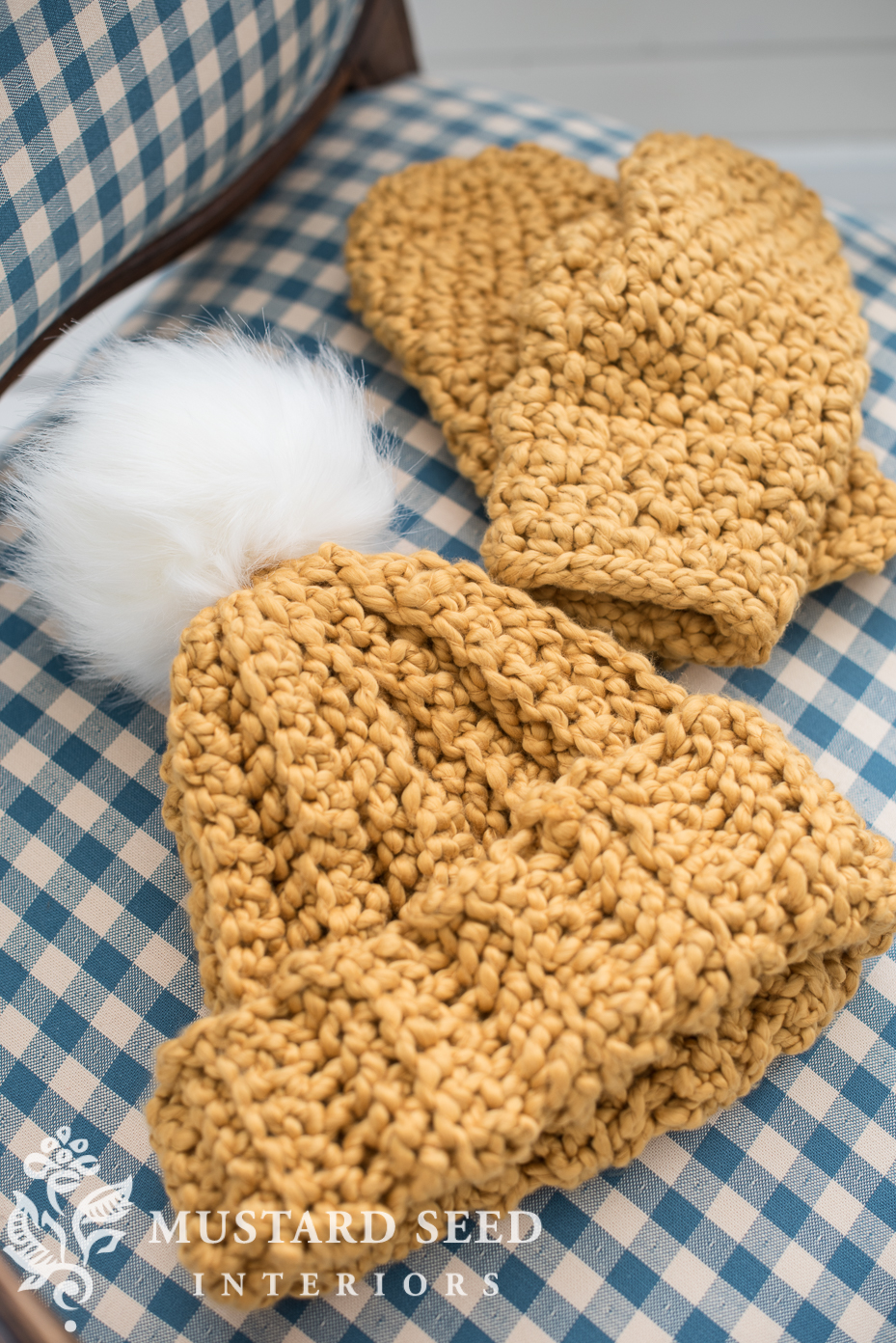 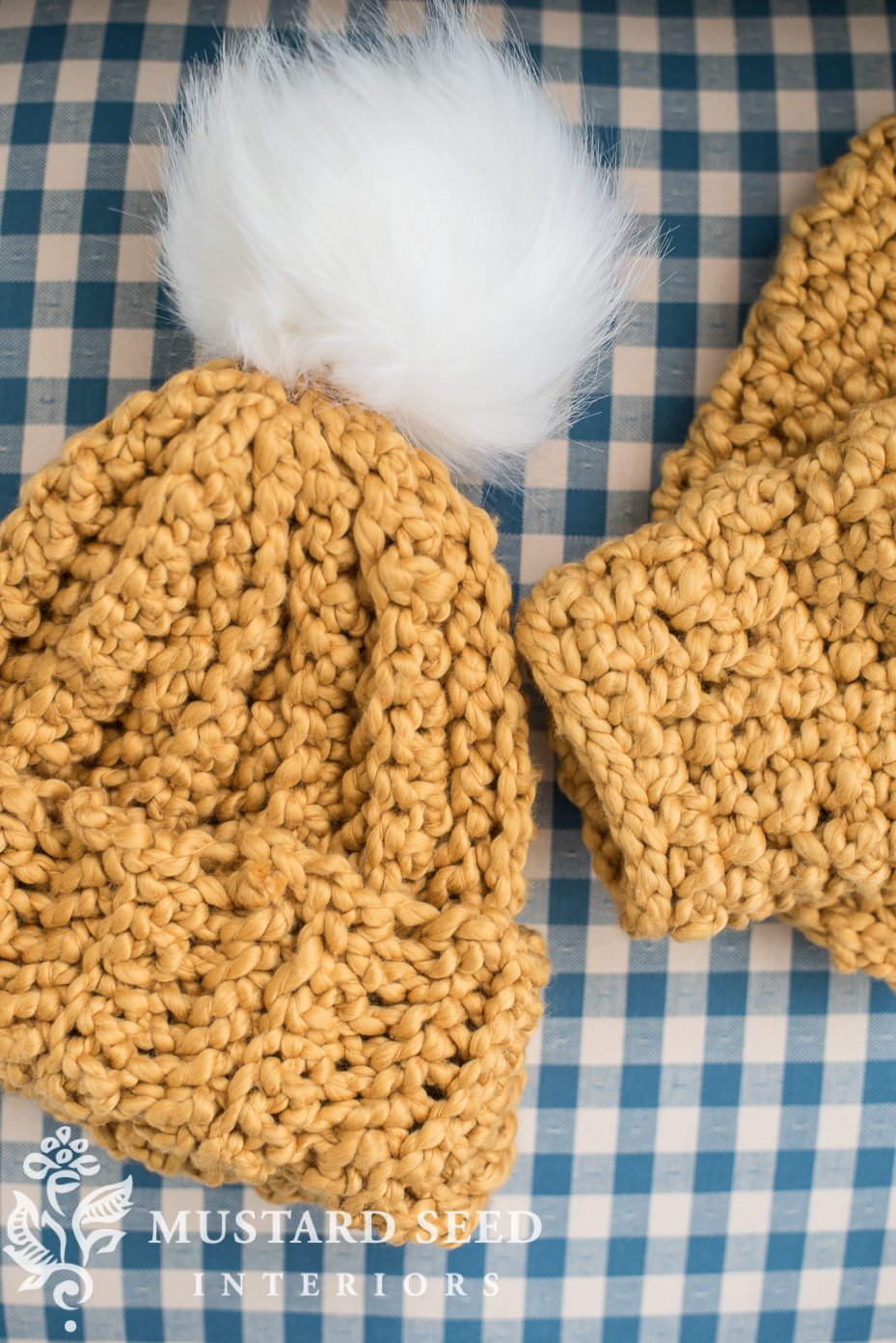 I need to give the mittens another try, though.  The yarn I was using (the XXL Cotton) was much thicker than the pattern called for, I made adjustments and I need to tweak those numbers.  One glove also ended up a little larger than the other somehow!!  All a part of learning.  They are wearable, even if the thumbs are a bit wide and squat!

Despite the imperfections, I’m pretty pleased that I produced a pair of mittens!

And here is the dishcloth I made… 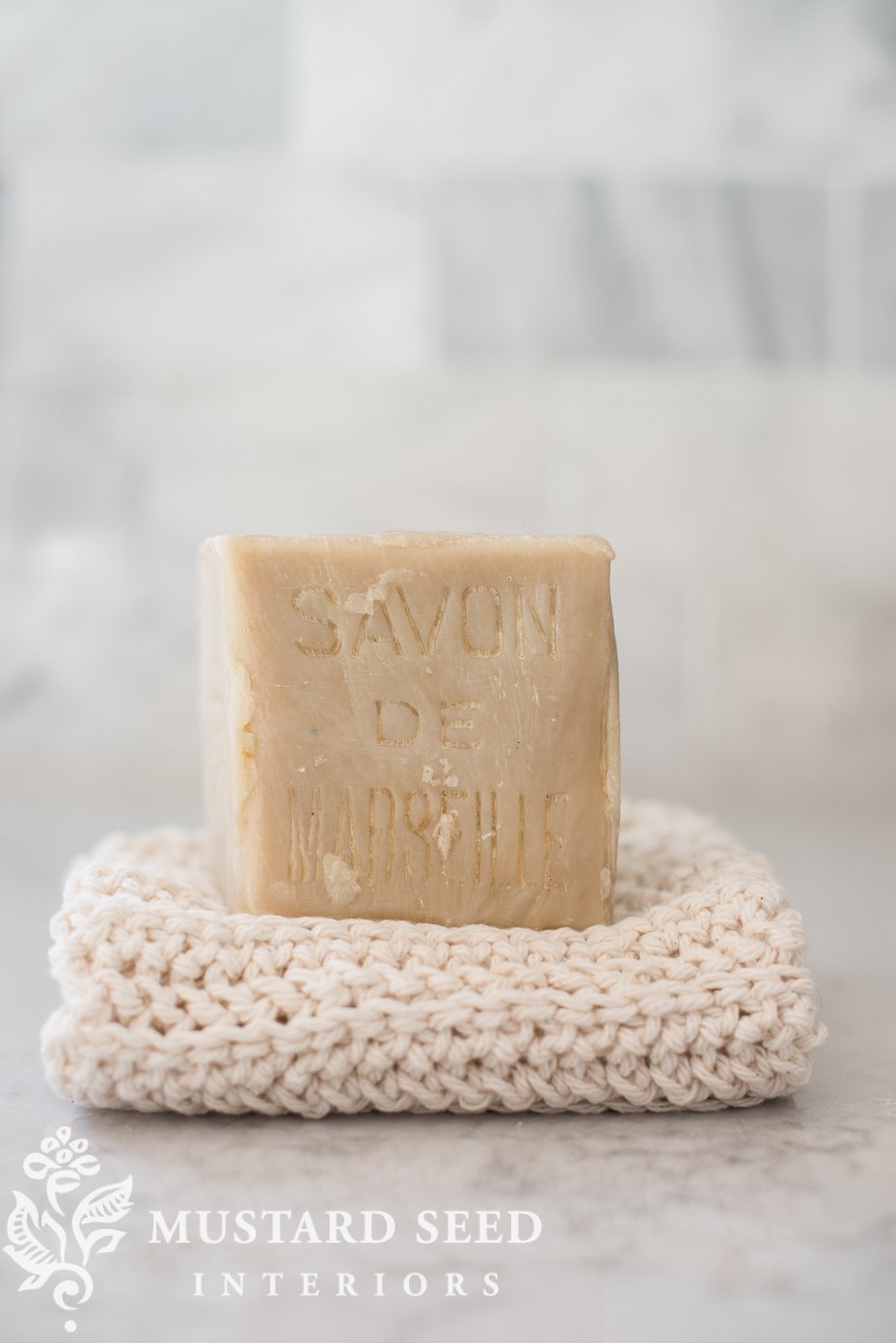 I think I’ll end up with a whole stack of these as I practice different stitches. 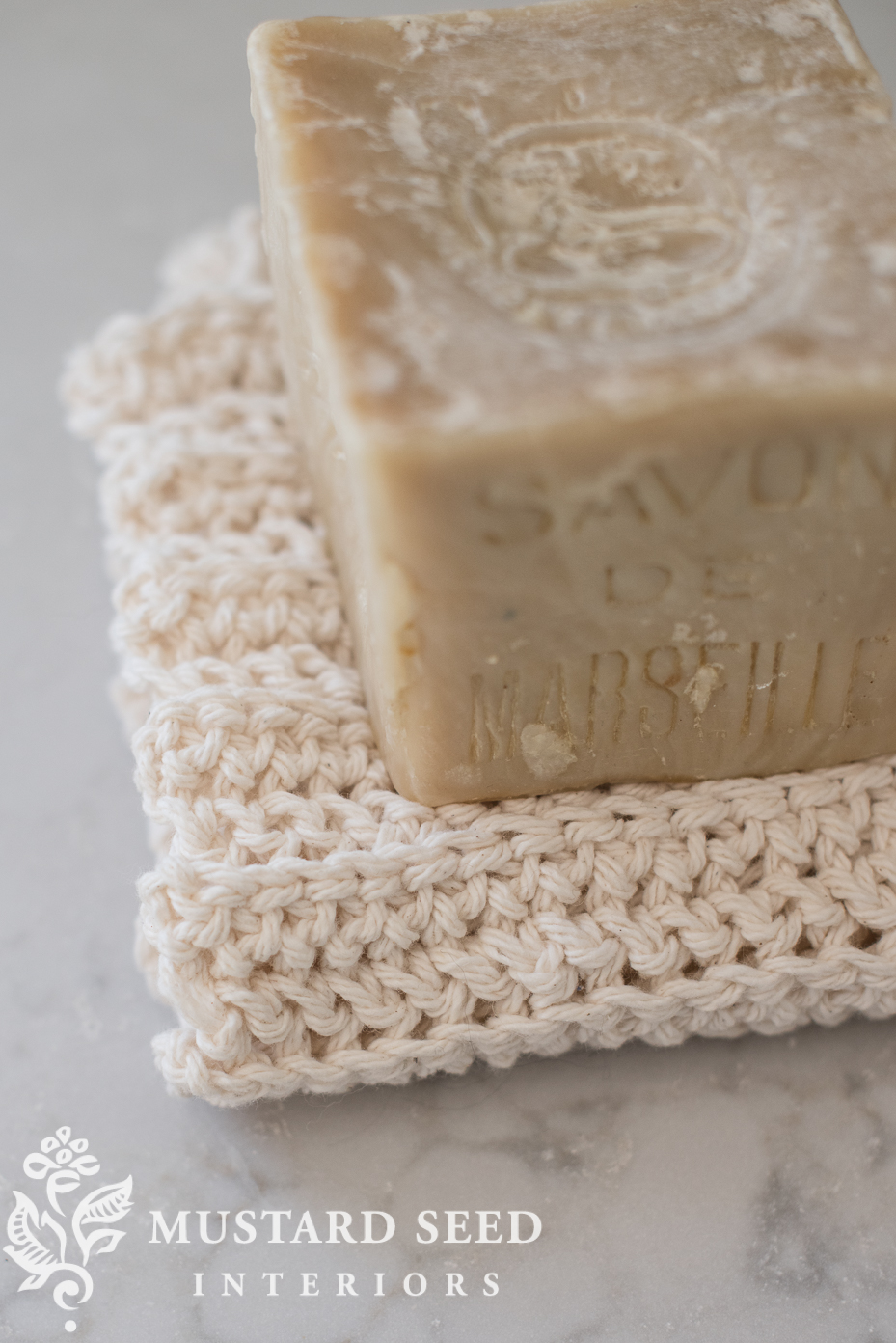 Thanks for all of the encouragement from other crochet/knit lovers out there.  It’s a whole new craft and community that I’m really enjoying during this season of life.

Today, I went to the 6-week follow-up appointment with my orthopedic surgeon.  The x-ray and incisions looked great and I am completely free of my sling now!  My arm feels like a heavy noodle and there is still a lot of swelling, but I know it’ll get stronger each day.  I have a few months of therapy in front of me (starting tomorrow), so I have a feeling I’ll be doing lots of crocheting!

A sweet moment happened, though, while I was waiting for Jeff to pick me up from my appointment.  I was waiting in the “pick-up waiting area” at the main Mayo Clinic building and an older gentleman came and sat next to me.  I was working on a dishcloth and he watched me for a few minutes and then leaned over.  Softly, he said, “You must’ve learned that from your grandmother.  I haven’t seen anyone doing that in a while.”  I told him that a friend taught me, but my great-grandmother did beautiful crochet work and she would love that I’m crocheting now.  He smiled and nodded in approval.

I must admit that I was a little selfconscious about crocheting in public, which is totally dumb.  His comment made me feel like I was doing something good…being a very small part of carrying on a tradition of productively passing time that’s been around longer than the iPhone.