The boys and I had a good time over spring break, but not having my usual work hours was a bit of a struggle for me.  I’m behind on pretty much everything…e-mail, errands, projects.  And I really hate being behind.  But, I tried to relax and embrace the time with them, knowing that the years will fly and work can (usually) wait.  I do feel the crunch that is coming, though, to get in as much work as I can before school is out for the summer.

While they were home, they played a lot with friends and we even had some weather that was nice enough for backyard soccer and bike rides to the park.  We went to a rock climbing gym, which both boys loved and discovered an aptitude for climbing.  I took them to trial music lessons for drums and guitar from young, tattooed teachers who taught them to play songs they like and now they’re eager to practice and learn more.  We also did a thorough cleaning and organizing of their rooms, which yielded two full bags of trash and three paper bags of clothes to donate.

When they were entertaining themselves, I chipped away at a few projects, including reupholstering the guest room bed… 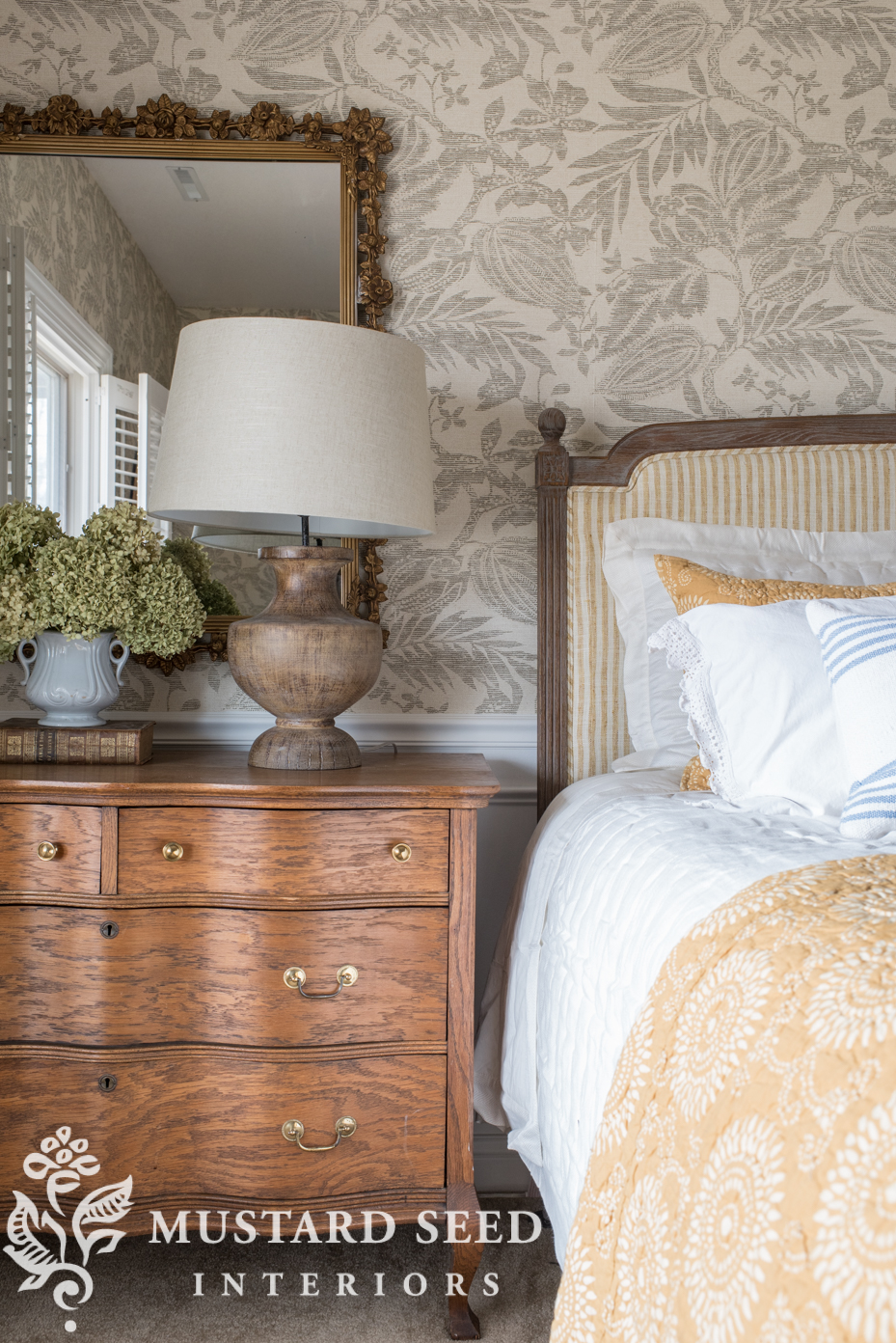 Now, I know I’m going to get a lot of I-liked-it-better-befores on this one and that’s okay.  I knew going into this makeover that some of my choices were unconventional and that’s one reason I liked them!  This is a guest room that’s in the basement, so I can step out on a limb a bit!

Several people have mentioned that they like everything but the gold/yellow additions, but that color is where this room makeover started.  I already had the beautiful gold bedding from Pine Cone Hill and an antique German wardrobe with the original mustard-colored paint.  This room was going to include yellow. 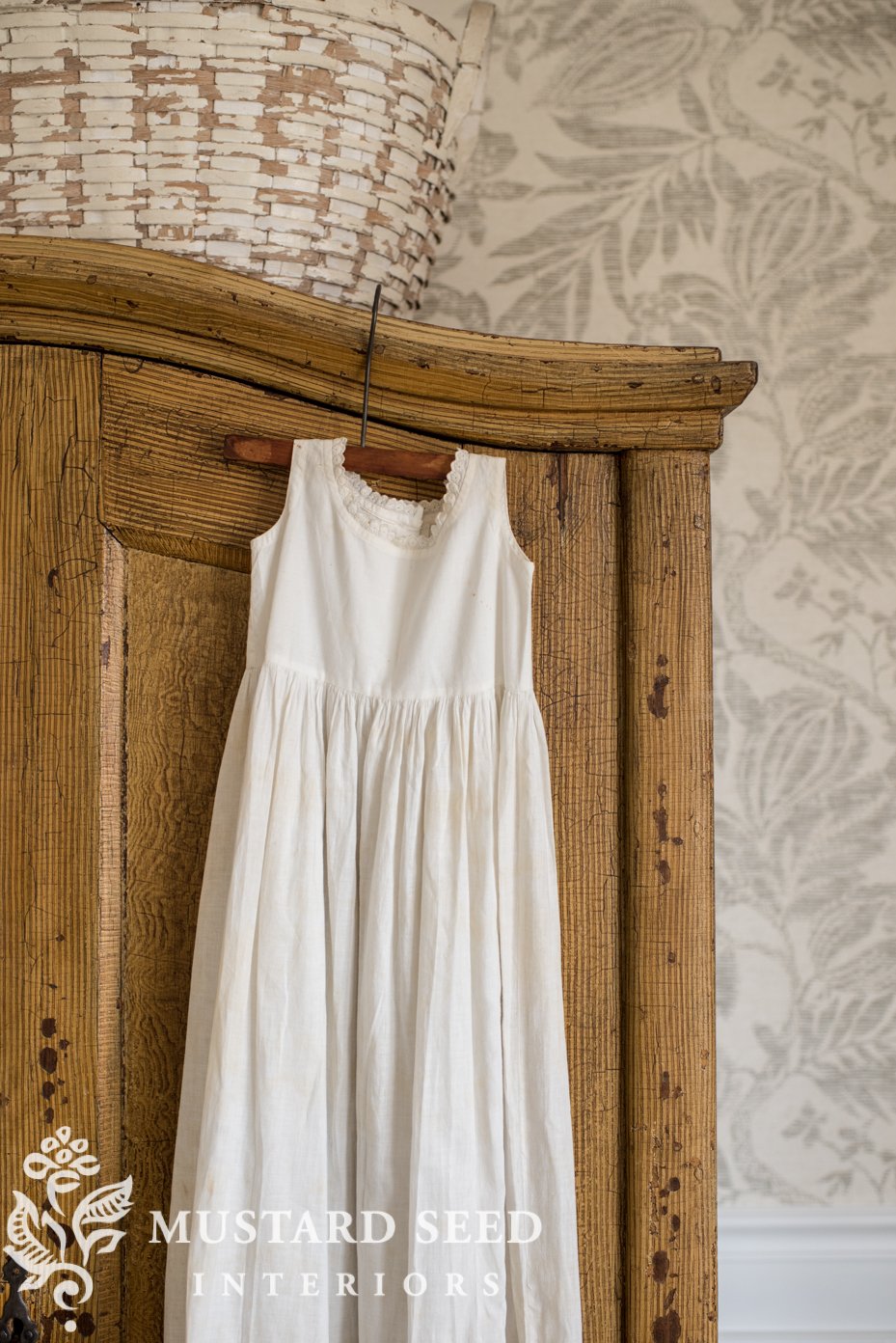 So, why pair it with a beige and cream wallpaper?  I don’t have a clear answer for you other than to say that I saw the paper, I loved it, and I kept coming back to it for this room.  When I put the sample with the gold, I like how monochromatic it feels.  It’s soft and sophisticated, but a little unexpected. 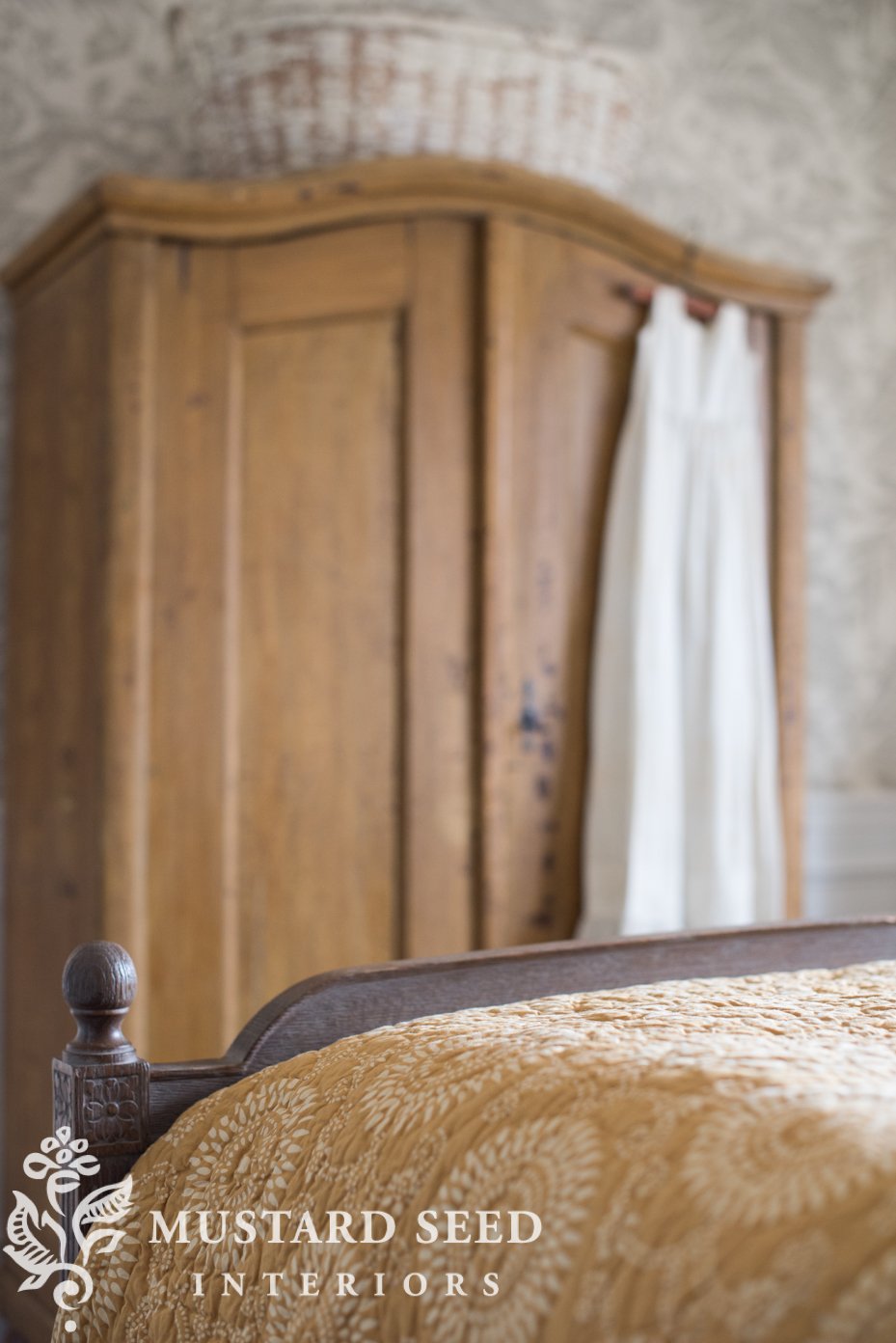 And, you can’t judge the room just yet, because it’s not quite finished.

I’m still thinking through the nightstands, lamps, and I plan to hang an arrangement of white ironstone platters over the bed. 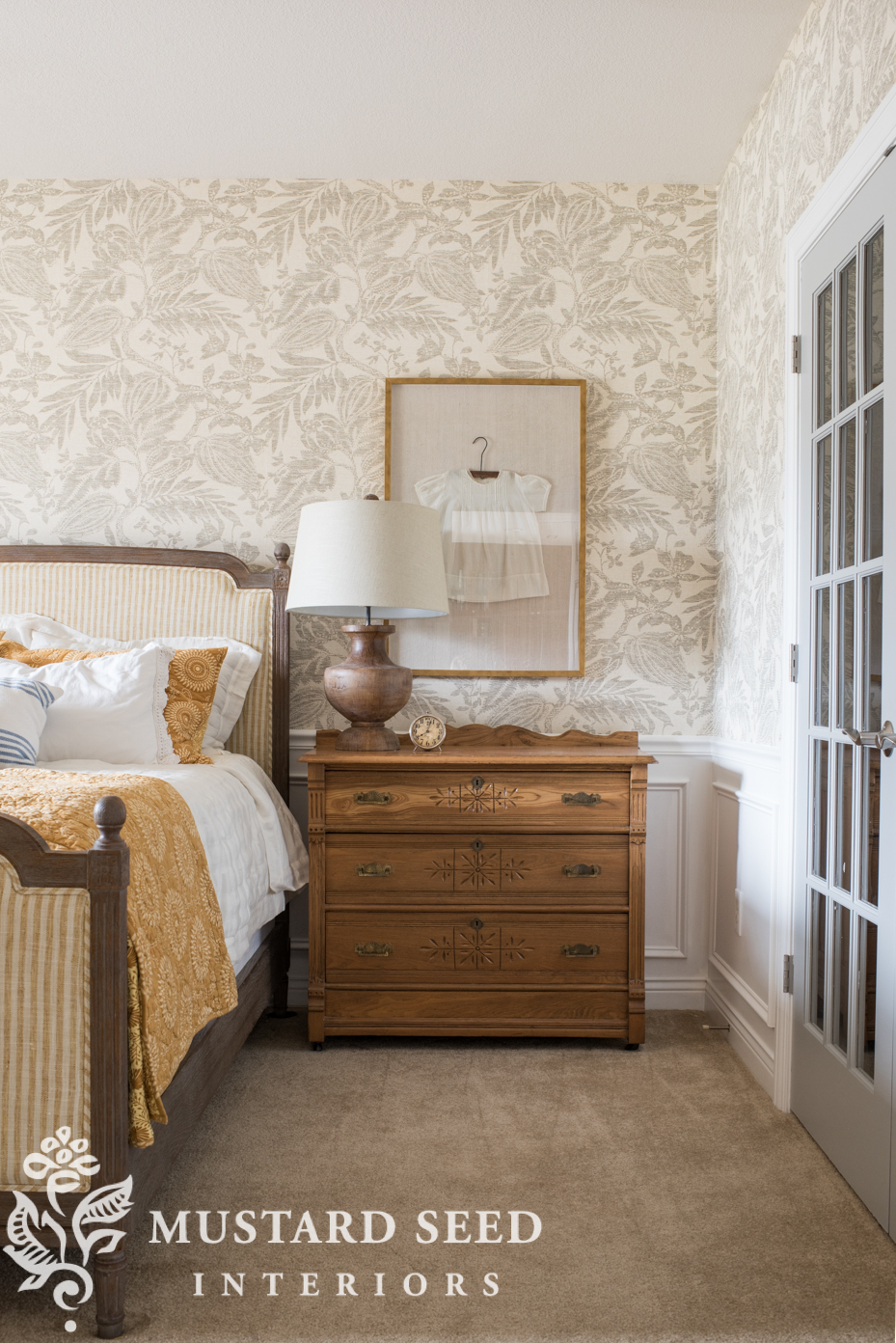 One thing I am still debating is painting the dressers/nightstands Aviary or a custom blue as I had initially planned. 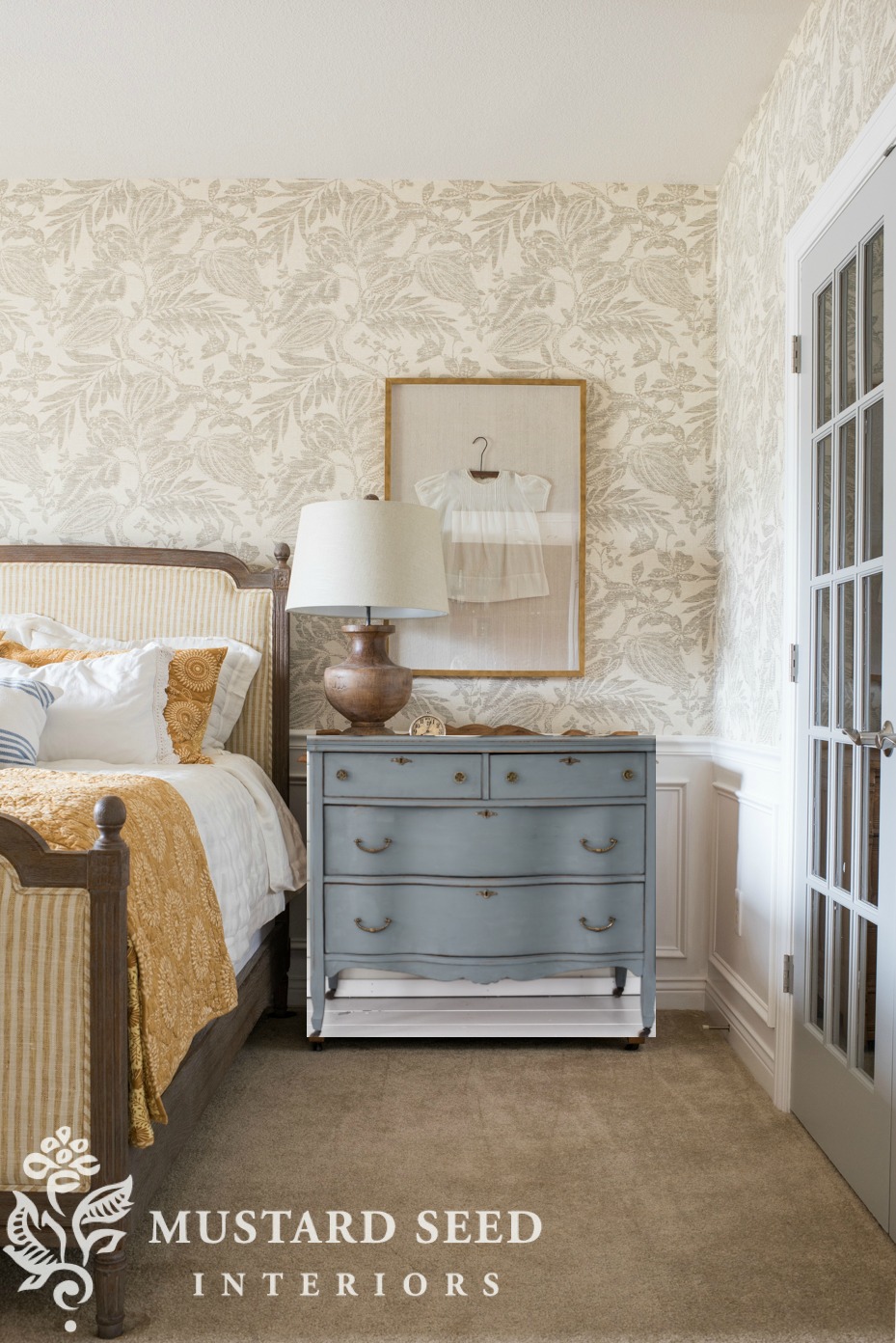 The other thing with upholstering the headboard is that it took me a couple of hours and about 3 1/2 yards of fabric to do this, so it’s a relatively low commitment.  If ever I want to change it, I can. 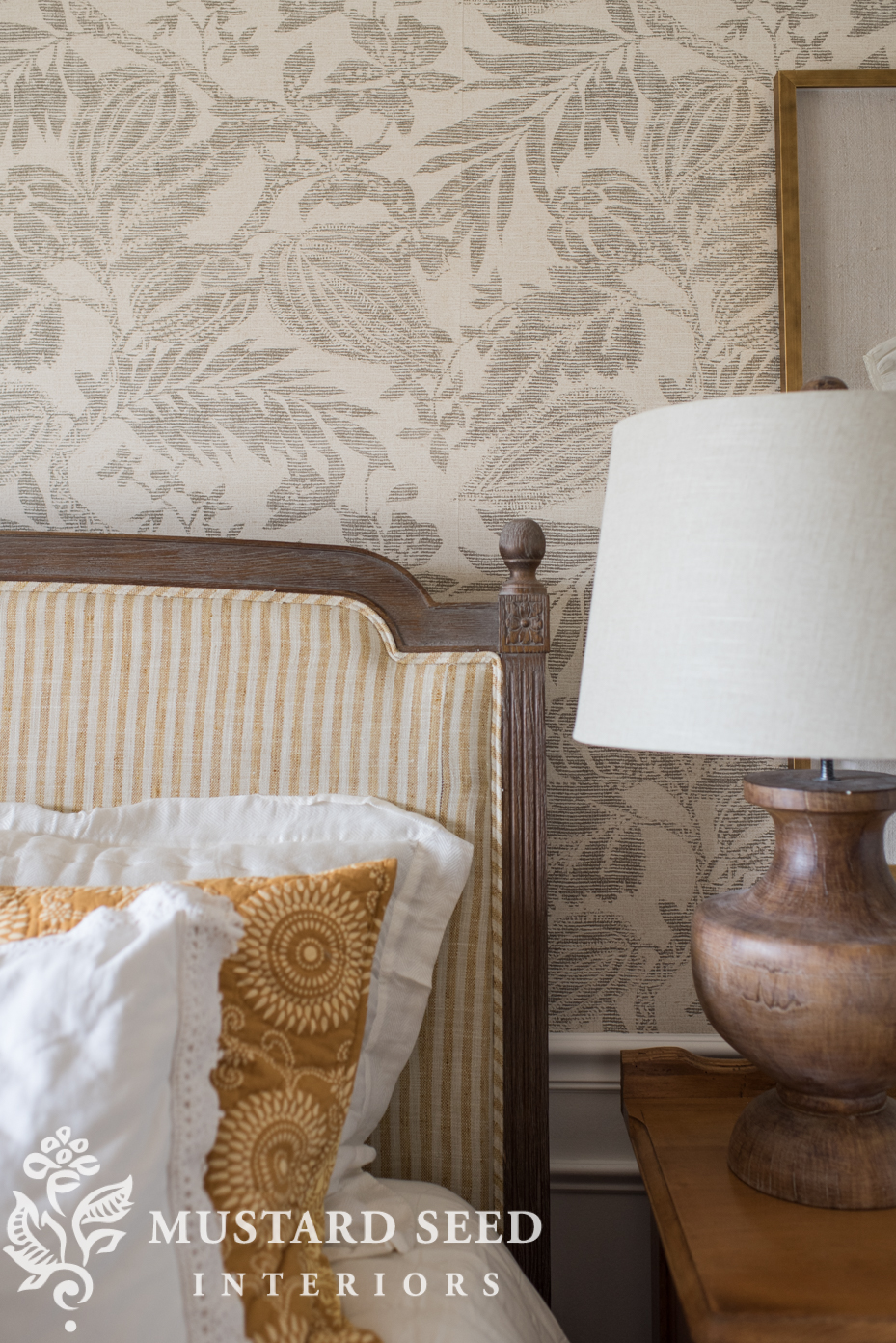 For now, though, I like it.  I like how it gives the room a collected feel.  It doesn’t look contrived or matchy-matchy. 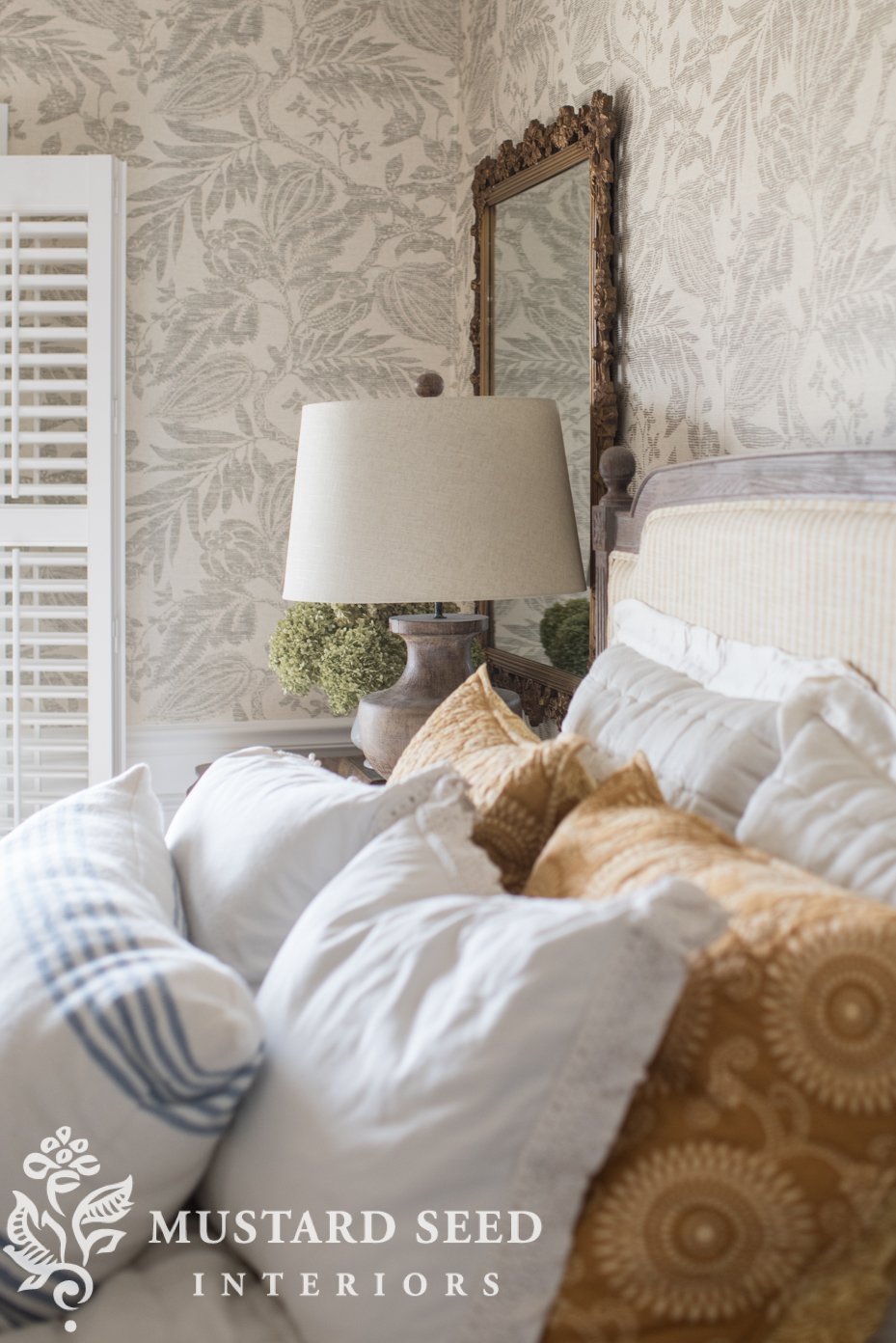 As far as the how-to, I was going to make a tutorial, but the house was bustling with boys, so I didn’t.  I have made tutorials that translate to this project perfectly, though.  HERE is a tutorial on making custom double-welting and HERE is a tutorial showing how to upholster the back of a chair, which is essentially just a smaller panel than the bed.  Because the width of the bed was wider than my fabric, I did have to add pieces to each end of the fabric panel.  It’s better to add pieces on each end, so you don’t have a seam right in the middle of the panel.  It’s less noticeable and looks more professional. 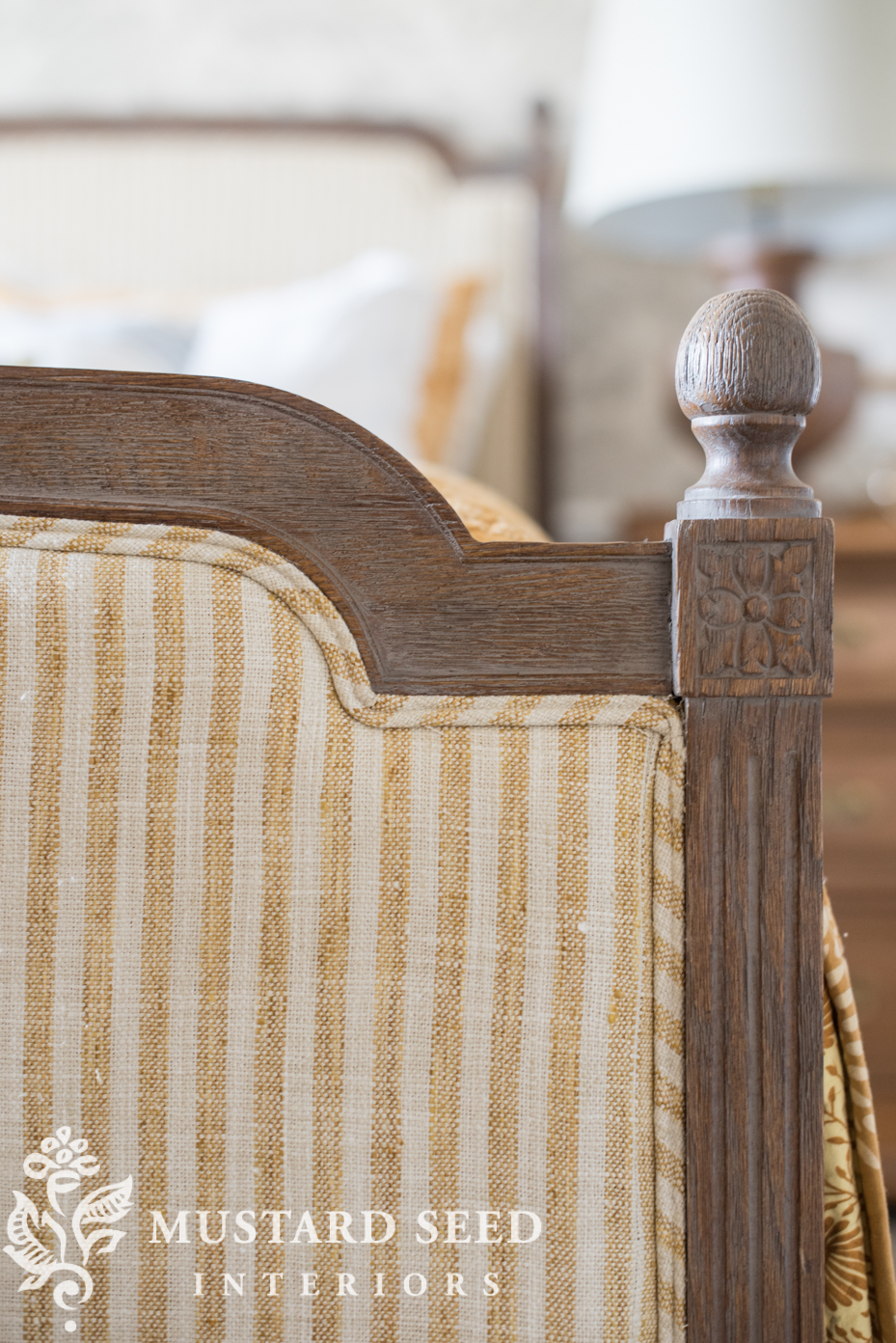 The fabric is Adams Ticking Stripe and the wallpaper is Antigua Oak, both by Annie Selke. 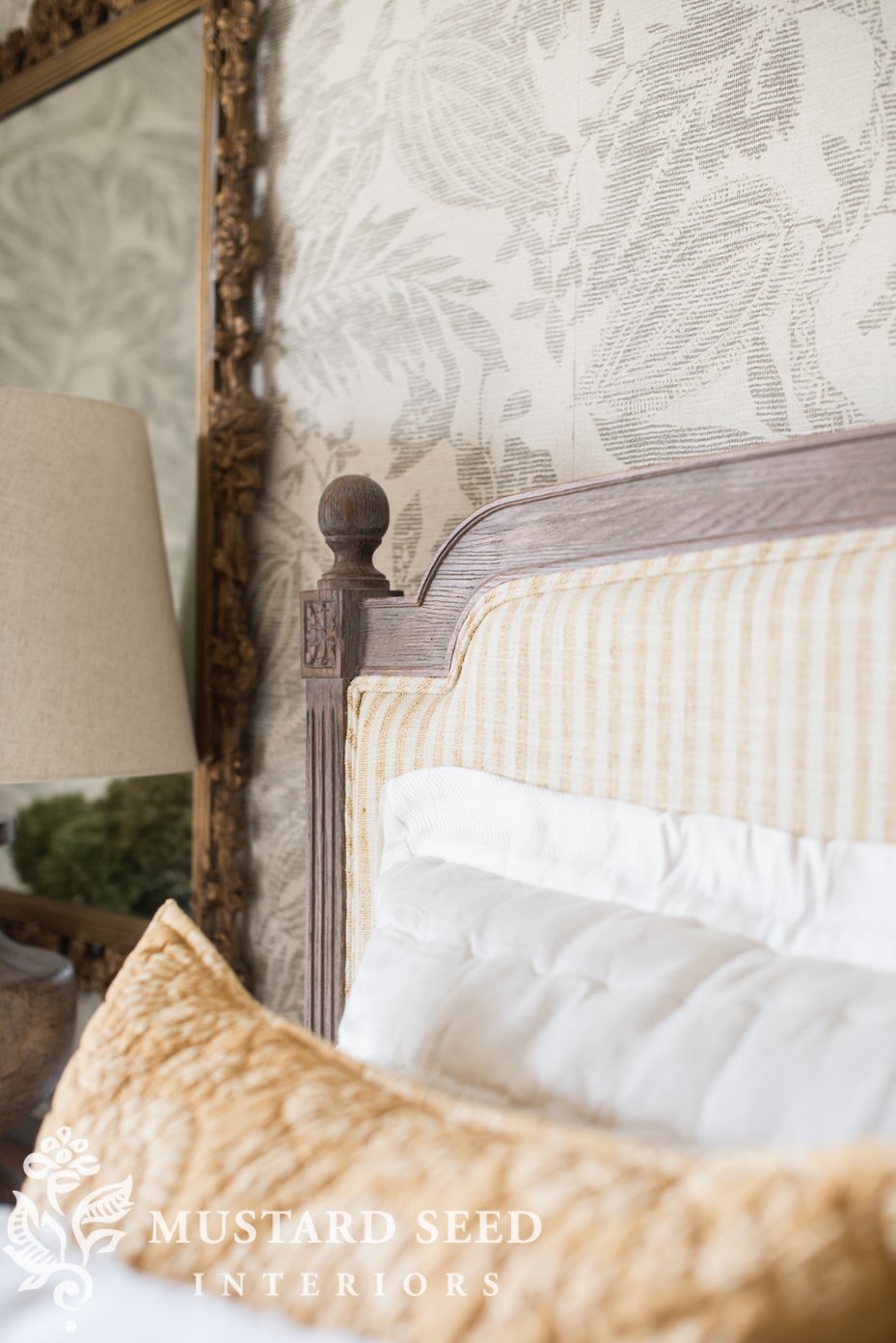 A full room reveal with all of the details will be coming soon!

189 Comments on “reupholstering the guest bed”